“The area was named for Confederate generals John C. and William E. Upton. Upton County covers 1,241 square miles of rocky land in the Edwards Plateau vegetation region; elevations range from 2,300 to 3,000 feet above sea level. While northern sections of the county are flat, the southern sections are rolling and hilly and are pierced by numerous small lakes.”

“The county’s exposed limestone surfaces and sandy loam soils are covered with scrub mesquite, greasewood, cacti, catclaw, and grasses. King Mountain in the southwest is the area’s highest point; Castle Mountain is fifteen miles north and Moltke Hill is fifteen miles southeast of King Mountain. Numerous small lakes drain to the tributaries of the Middle Concho and Pecos rivers.”

“Despite their considerable achievements in material culture and adaptation to their environment, the Indians lost their domination of the region to the United States Army and the advancing tide of white settlers in the 1870s and 1880s. In the 1860s the Chihuahua Trail from Mexico to Indianola, Texas, a significant trading route, crossed the region, as did the route of the Butterfield Overland Mail (1858–61), and the Goodnight-Loving Trail. Originally part of the Bexar Territory, the area was part of Tom Green County from 1874 until 1887, when Upton County was established.”

“One of the earliest settlers was Dr. George W. Elliott, who moved into the area in 1881 and drilled the first well; he reached water at thirty feet. The area was part of the open range until the 1890s, when sheepmen crossed the Pecos River to compete with cattlemen for the range. The United States Census counted fifty-two people living in the county in 1890, and only forty-eight in 1900; most of these belonged to the families of Arthur F. Schnaubert, Frank Inghram, and Jim O’Bryan, or were hired cowboys and ranch hands. According to the agricultural census for 1900, there were eighteen ranches that year; almost 39,000 cattle were reported, but virtually no crops were grown.” 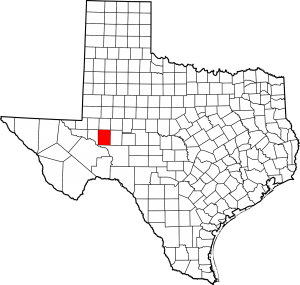 “The area began to attract more settlers in the early twentieth century. In 1900 and 1901 open range cattlemen started selling their holdings, and the state encouraged the sale of school and railroad lands for settlement. Rancher Henry M. Halff tried to develop an irrigation area for cotton and vegetable raising and sold town lots at Upland for the price of a notary fee.”

“Upland opened a public school in 1908. By 1910 there were 105 ranches or farms in the area, and the population had increased to 501; the county was organized that year, and Upland became the county seat.”

“In the fall of 1911 the Kansas City, Mexico and Orient Railway reached the townsite of Rankin, and by January 1912 most of the people living in Upland had moved to Rankin. The county’s population soon was concentrated at or near Rankin, and after 1913 the town’s school system served the entire county. Rankin became the county seat in 1921.”

Between 1911 and 1912 some farmers, discouraged by poor soil and droughts, abandoned their efforts to raise crops in the area. Remaining settlers who raised horses, cattle, and sheep did well during the high market price years of World War I, but by 1920 only thirty-one ranches or farms remained, and only 253 people lived there. Events soon demonstrated that the county’s economic future was tied to oil. In 1926 George McCamey’s wildcat brought 700 hopeful people to the area and established a new town in the southwest corner of Upton County named for the oil discoverer. The opening of the Yates oilfield especially helped to develop Upton County’s economy. The Yates field actually lies in Crockett and Pecos counties, but Rankin developed as the supply and oil service center for the rich district and boomed as a result.”

“By late 1927 several thousand people lived in McCamey. Water had to be freighted from Alpine, 100 miles distant, and was sold at one dollar per barrel until 1929, when good water from the Trinity sands wells seventeen miles away was piped into the town. Meanwhile the agricultural sector of the county developed slowly, and in 1930 there were thirty-six ranches or farms in the area. The number of cattle had declined to 17,819 by that year, and only two acres of crops were harvested in the entire county.”

“As of 2014, 3,454 people lived in the county. About 44.5 percent were Anglo, 2.6 percent African American, and 51.6 percent Hispanic. Major communities include Rankin (population, 754), the county seat; McCamey (1,860); and Midkiff (182). Rattlesnake roundups at Rattlesnake Butte and rattlesnake races at McCamey have been annual events since 1936. McCamey is also home to the Mendoza Trail Museum. Rankin hosts the County Livestock Show in January, a Junior Rodeo in June, and a Christmas Parade in December.”

I was the guest of Rankin and Upton County on August 13, 2013 and returned to rephotograph the courthouse on July 4, 2015.

It’s a tale as old as time. A team of pioneers arrive in what was to be Upton County and establish their outpost near the center of the wild and western area they planned to call home. Then, ten years later, the nation’s railroad companies decide to route their tracks through the lower, southwestern corner of the county instead and the first city just fades away. Within a year of the rail’s arrival in Rankin (1911), most all of Upland’s population had moved to the newer, more thriving community.

In 1912, Rankin became Upton County’s population center, and nine years later it became the county seat. So ended the fatal tale of Upland. Soon, the small settlement evaporated into nothingness and sunk back into the plains. Today, the only reminder that anything once was is a collection of dilapidated courthouse ruins on private land.

The architect and contractor of this building are unknown, as is what the building even looked like prior before it fell apart. Unfortunately, no photos of its heyday survive. 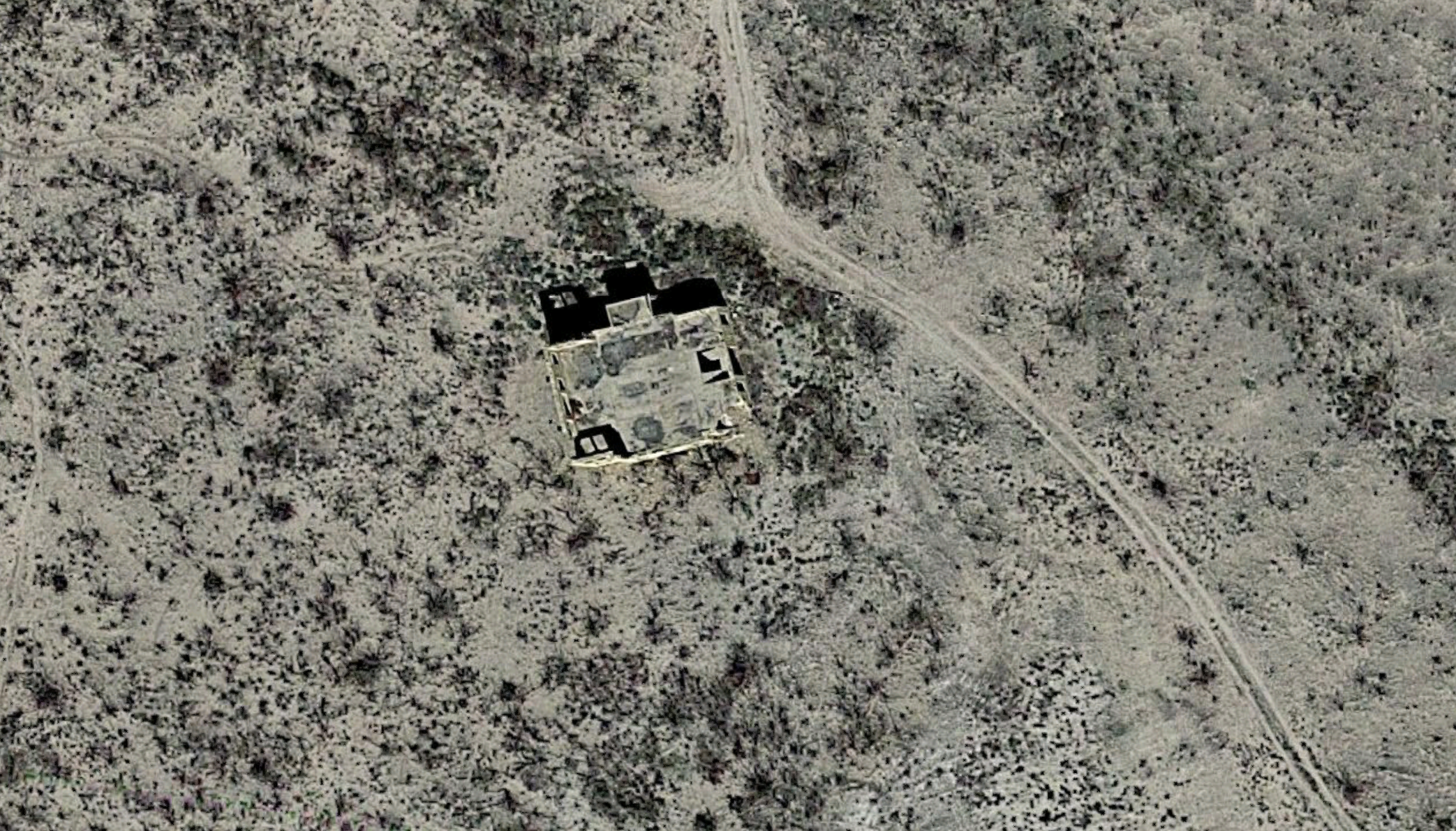 This image, courtesy of Google Maps, shows the last signs of Upland’s existence from an aerial perspective. I didn’t make it out to see the old courthouse when I visited Upton County, as the turnoff from Highway 349 to access the ruins (CR 107) is guarded by a gate and cattle guard.

Of course, taking that road would have been trespassing, unless I’d received special permission from the land owners. I didn’t, but one man and his family did just that in 2010. He compiled a YouTube video of his experience in Upland, which I’d recommend watching. You can do so: here. 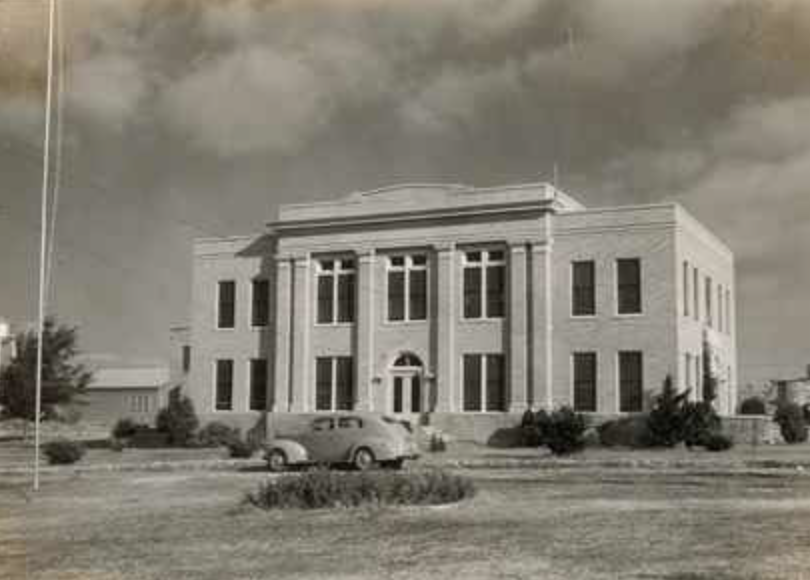 David S. Castle, the king of courthouse architecture in this specific region of Texas, is responsible for the simple and charming Classical Revival building that originally served Upton County. His work in the fledgling county seat lasted until approximately 1958.

Around that time, the architectural team of Leonard F. Crockett & Associates executed designs to modernize the courthouse and hide Castle’s work behind even more reductionist façades. All that makes this building “pop” today (aside from its hilltop location) is the theme of a nearly turquoise blue Crockett elected to work with. It’s a splash of color largely unique in what is one of the most arid, barren, but inexplicably beautiful regions of Texas. 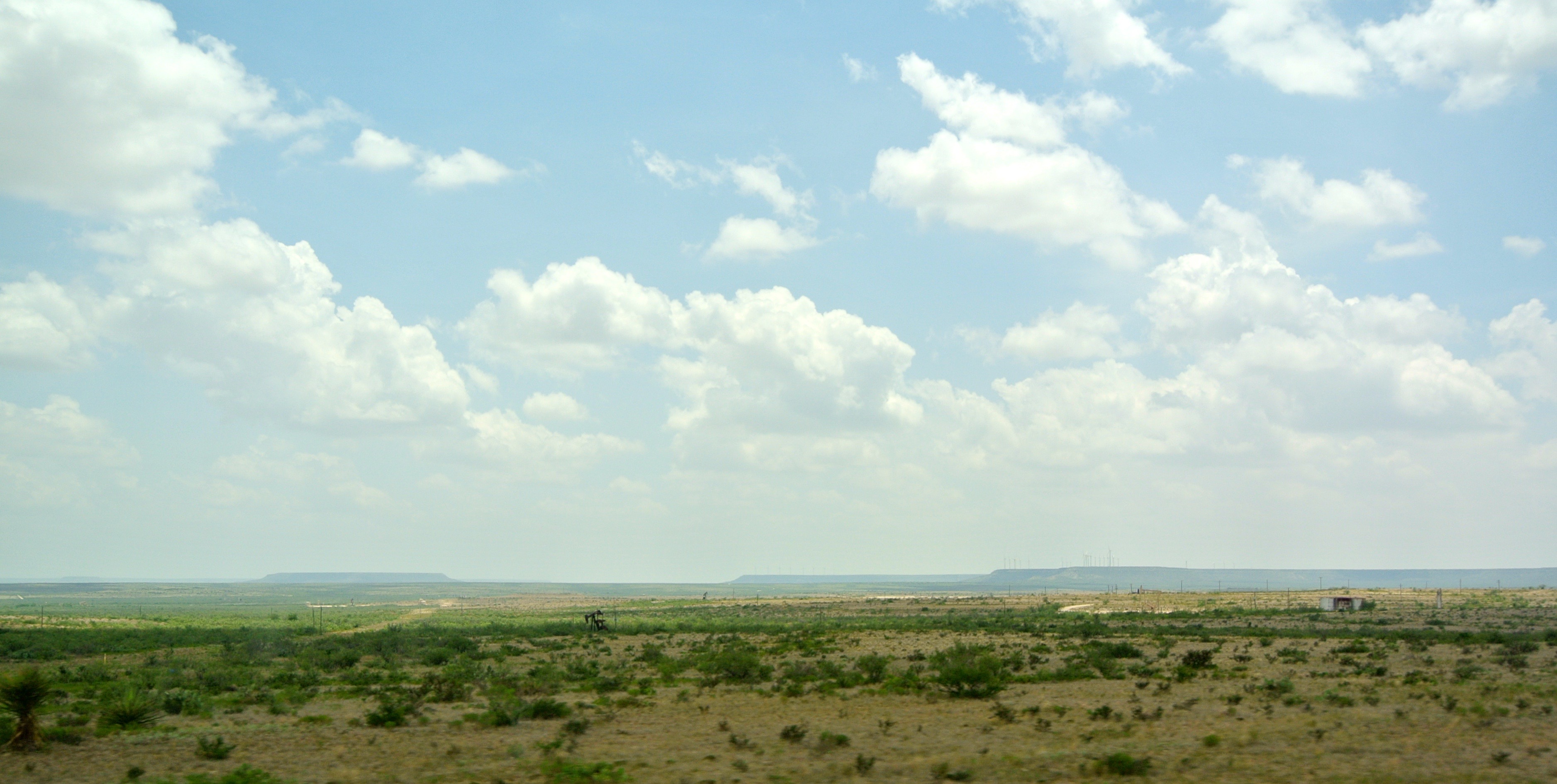 A land of big skies and Big Oil

The Upton County Courthouse faces down on the rest of town from a hilltop perch on 10th Avenue.

Long gone are the remnants of David Castle’s work.

The view from the southern doors captures the rolling Upton County hills and mesas in the distance.

Here’s a look inside.

This is the eastern entrance, on Rankin Street.

There’s not much of a Rankin Square to talk about at all.

A thin, gravel 11th Avenue is all that separates the courthouse lot from the Upton County Sheriff’s Office just up the hill.

Most reserved parking spots are kept under these metal awnings to help beat that nearly unbearable Texas summer heat.

You know you’re in West Texas when…

A portion of the courthouse’s northern side

This mess of bricks is behind the awning next to the jail, in between the courthouse body and the old jail building.

The entire courthouse complex’s northwest corner, at the intersection of 11th Avenue and Grand Street

Visitor parking is relegated to the western entrance, on Grand Street. 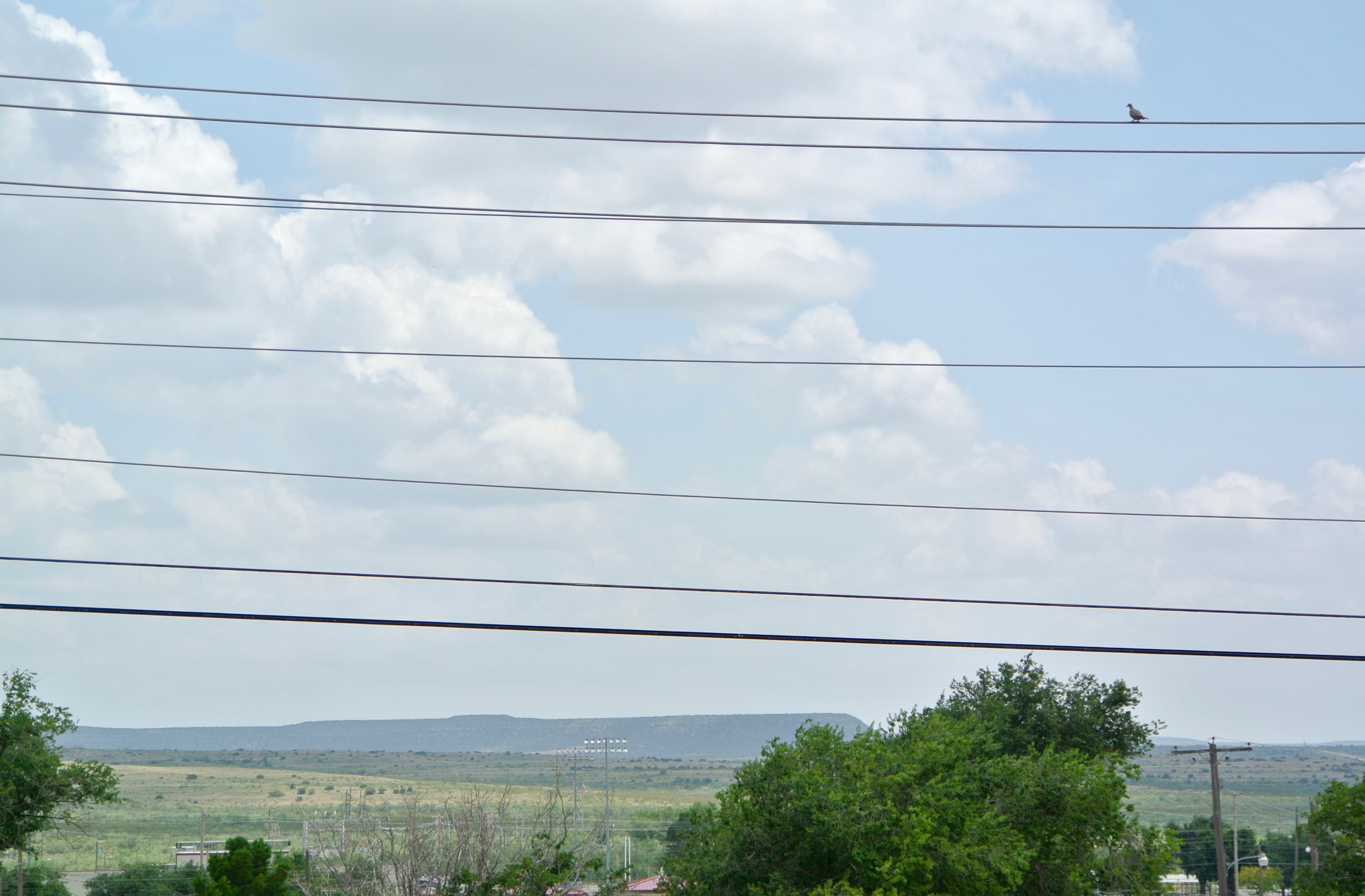