“The area is named for the Pecos River, which flows along the northern boundary of the county. Pecos County covers 4,776 square miles and lies primarily in the Trans-Pecos physiographic region, which begins at the Pecos River. In the south and east the county has undulating to hilly terrain surfaced by dark and loamy soils over limestone; this part of the county is 90 percent exposed rock.”

“The Pecos River is the only major source of surface water in the county. It flows continuously, while other streams in the county flow only after infrequent torrential rains. Springs were at one time an important water source for the area, but because of heavy pumping of ground water, most major springs no longer flow.”

“The town of St. Gall, later renamed Fort Stockton, was established near the Fort Stockton army post at Comanche Springs by Peter Gallagher, who purchased land for a town site in 1868.”

“The land of Pecos County was originally in Bexar Territory and later part of Presidio County. Pecos County was established by the Texas legislature in 1871. The county was formally organized on March 9, 1875, at St. Gall, which became the county seat. There were 1,100 people living in the county that year.”

“During the 1880s St. Gall was renamed Fort Stockton, and the army post closed, causing a temporary economic slump in the county due to lost trade and employment. The county lost virtually all of its small landholders during the 1880s; in 1883 parts of the county land was split off to form Reeves and Terrell counties, and in 1885 another part was incorporated into the new Val Verde County.”

“Construction of the Kansas City, Mexico and Orient Railway Company of Texas across Pecos County in 1913 caused a boom in land speculation and community growth. Irrigation projects along the Pecos River in the northern part of the county were started to attract land buyers. The communities of Baldridge, Belding, Buena Vista, Chancellor, Girvin, and Imperial were established during this period. By 1920 there were 207 farms and ranches in the area. Almost 8,000 acres was planted in cotton, another 534 was planted in sorghum.”

“Several unsuccessful attempts to find oil in Pecos County were made after the beginning of the twentieth century, The Yates fieldqv was discovered in 1927. It was one of the largest in the nation at the time and caused a boom. By 1930 the towns of Red Barn, Iraan, and Bakersfield had been established to accommodate the influx of prospectors, oil workers, and others searching for opportunities.”

“Tourism and new discoveries of petroleum and natural gas helped the economy in Pecos County to grow in the 1950s and 1960s. In 1952 the largest gas field in the county was opened on the M. C. Puckett and Son Ranch, south of Fort Stockton. Tourism was boosted in 1956, when construction of U.S 290 linked Fort Stockton to the Big Bend National Park.”

Pecos County, like the county seat of Pecos in nearby Reeves County is pronounced: “pay-cuss” contrary to the popular pronunciation of “pay-cose.” 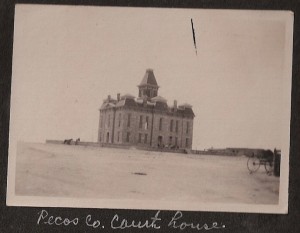 <– The original, 1883 structure of which the architect is unknown. (Credit to: Pecos County page on rootsweb.ancestry.com) 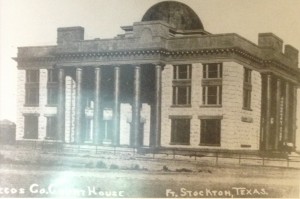 From 1911-1912, the courthouse was severely remodeled to a look that included a dome rather than the former tower. –>

In the 1930s, Pecos County demolished the dome and renovated some of the roof to yield what stands today. Here are my photographs of the current building and my visit to Fort Stockton. 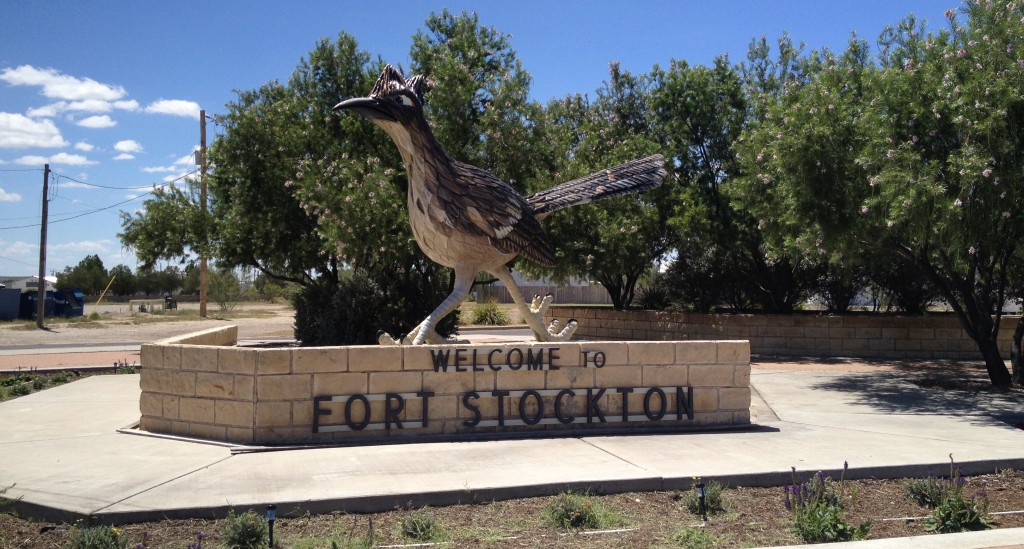 Upon entering downtown Fort Stockton you are greeted by this impressive roadrunner. 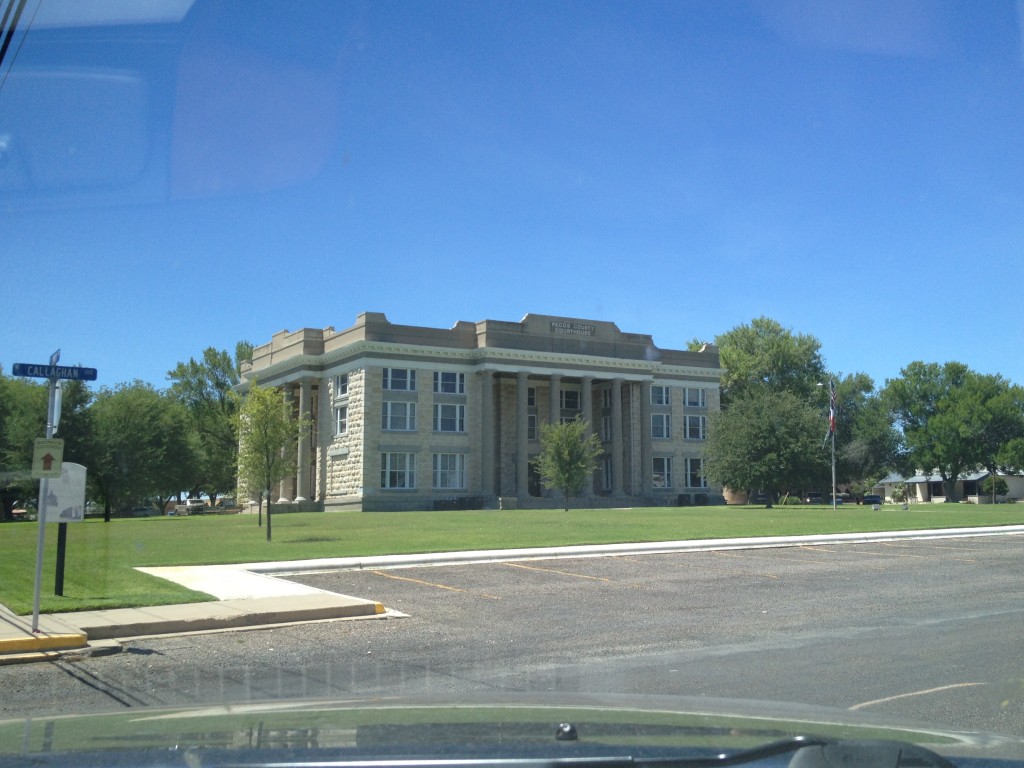 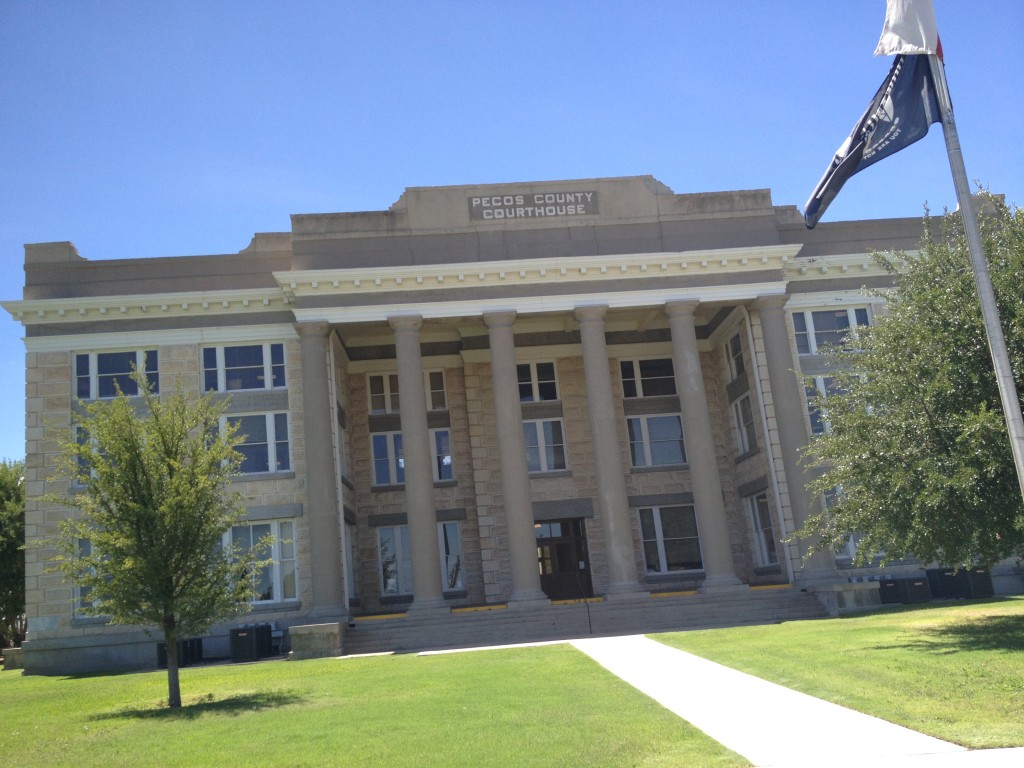 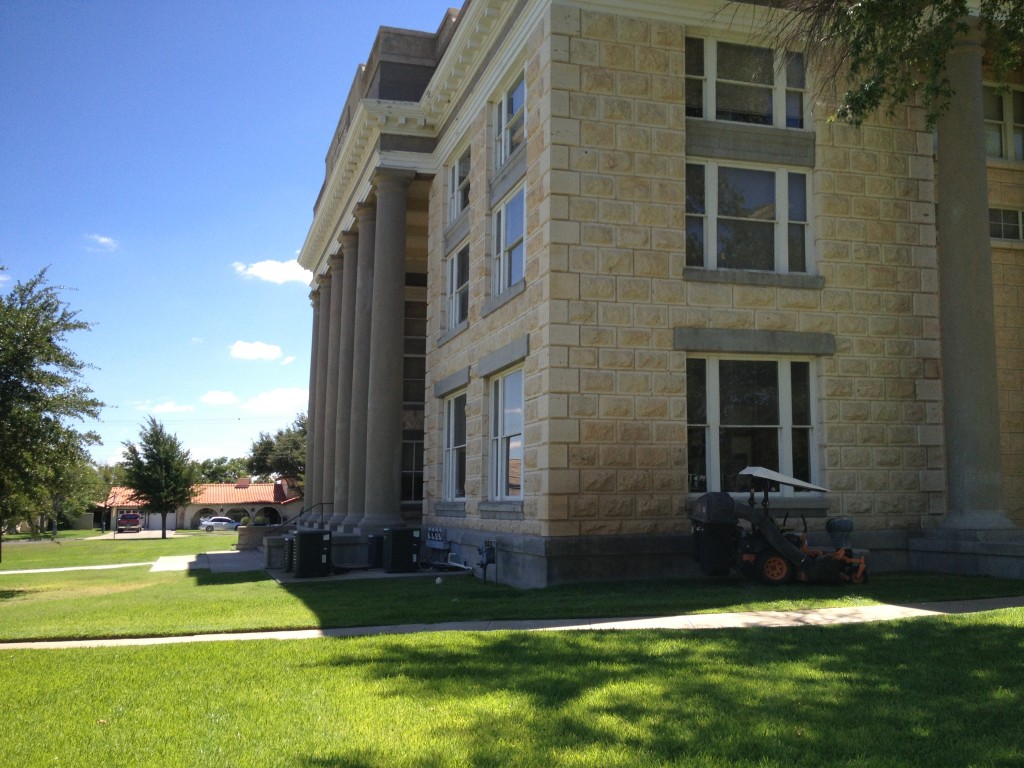 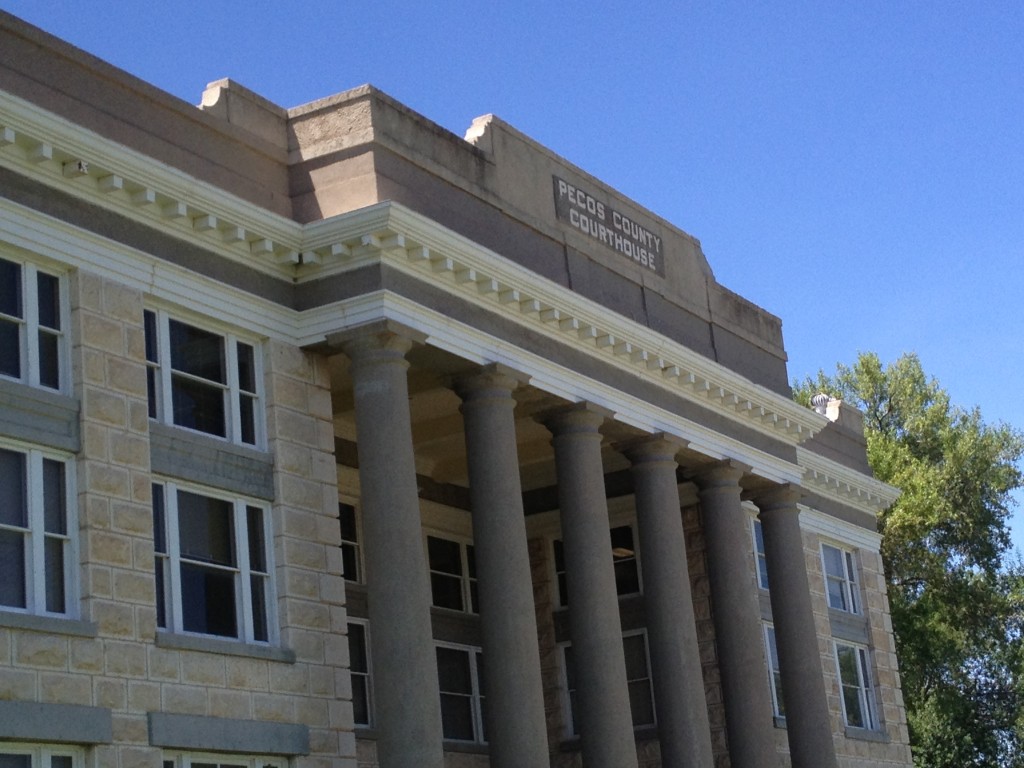 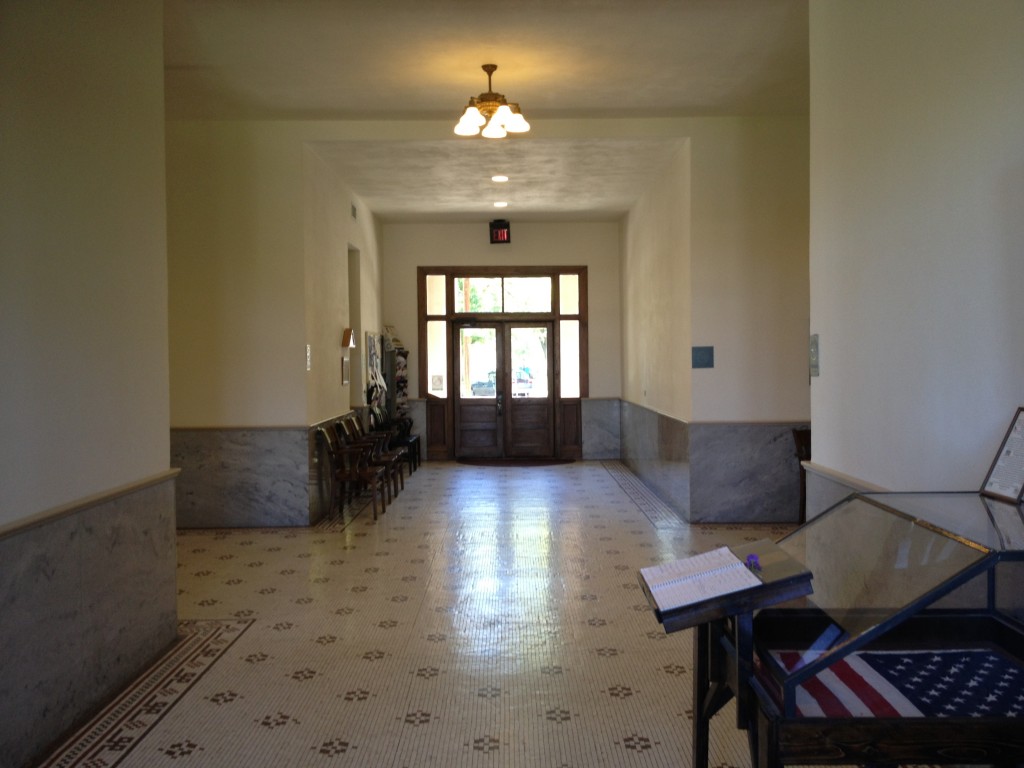 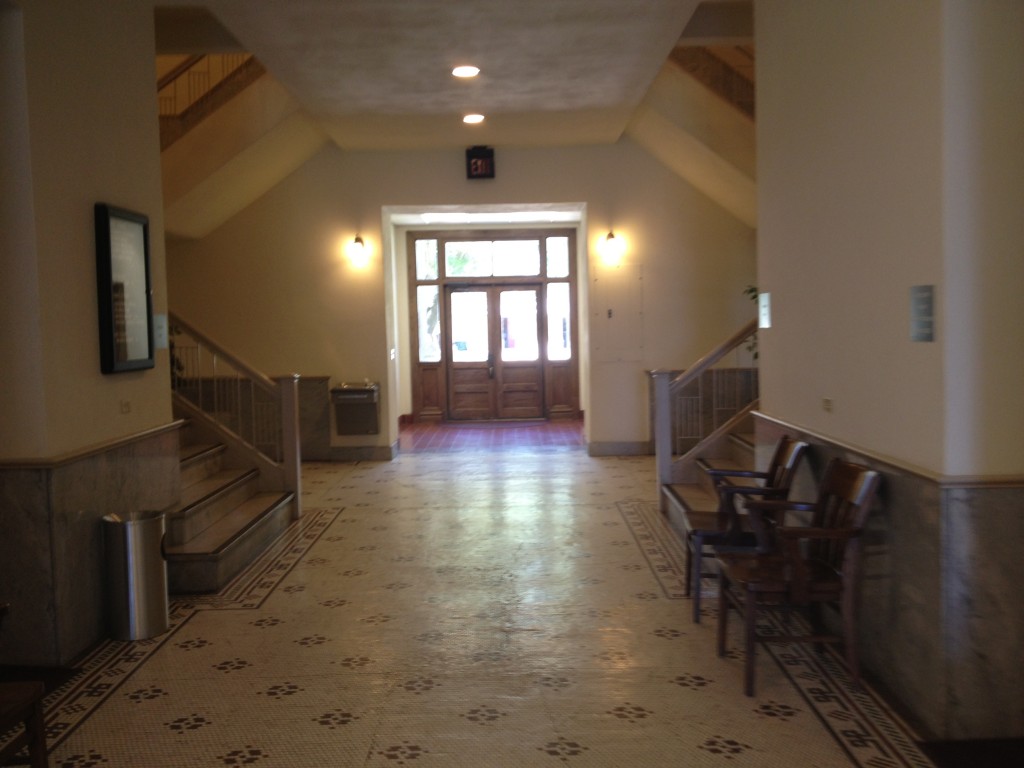 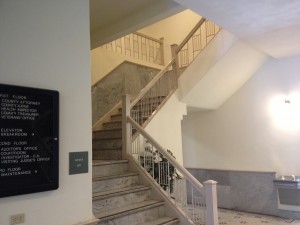 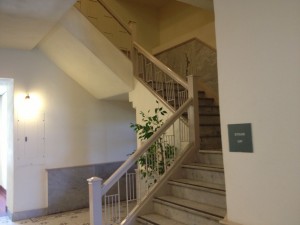 Double staircases line the western side of the courthouse, leading up to the second-story courtroom. 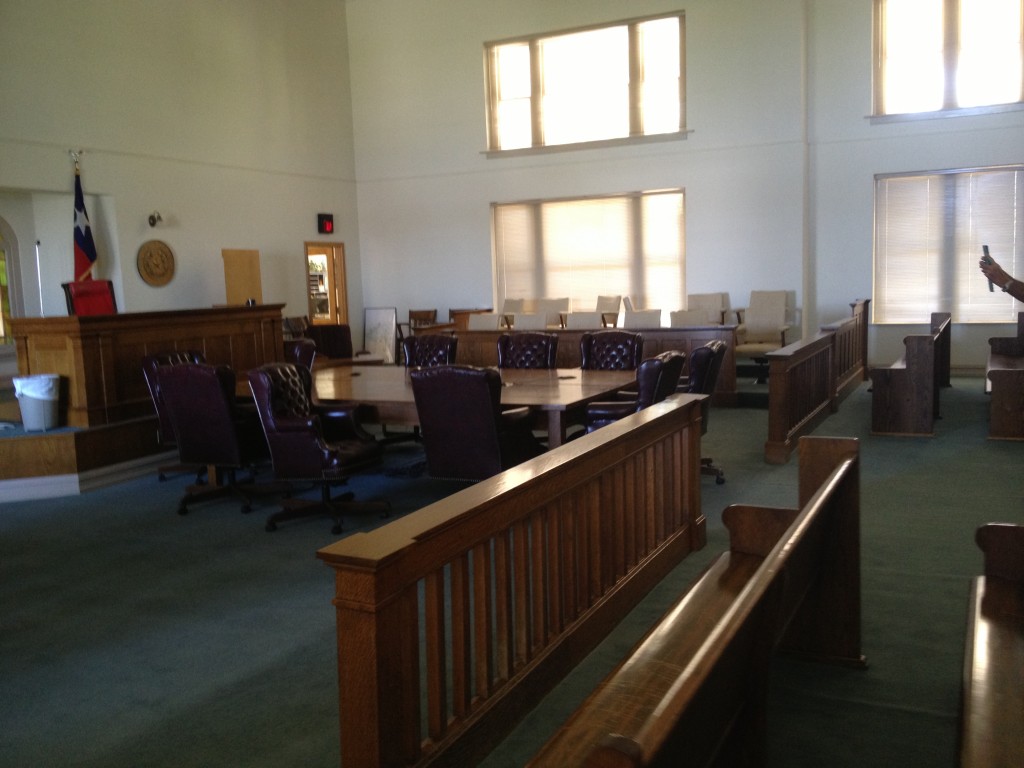 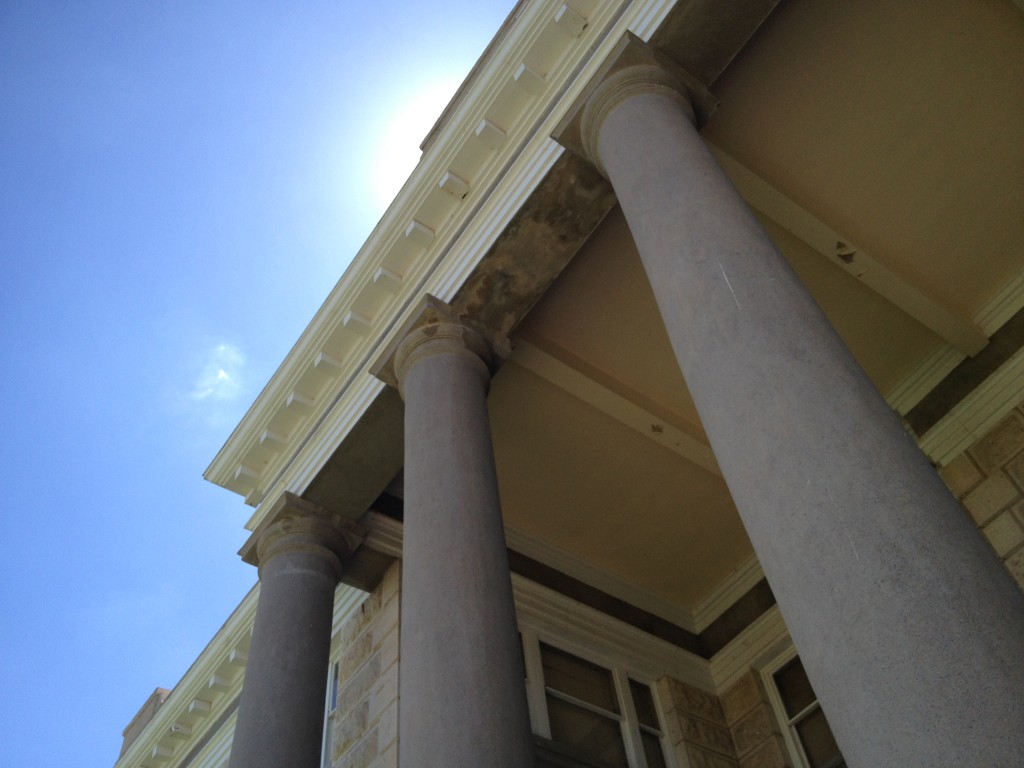 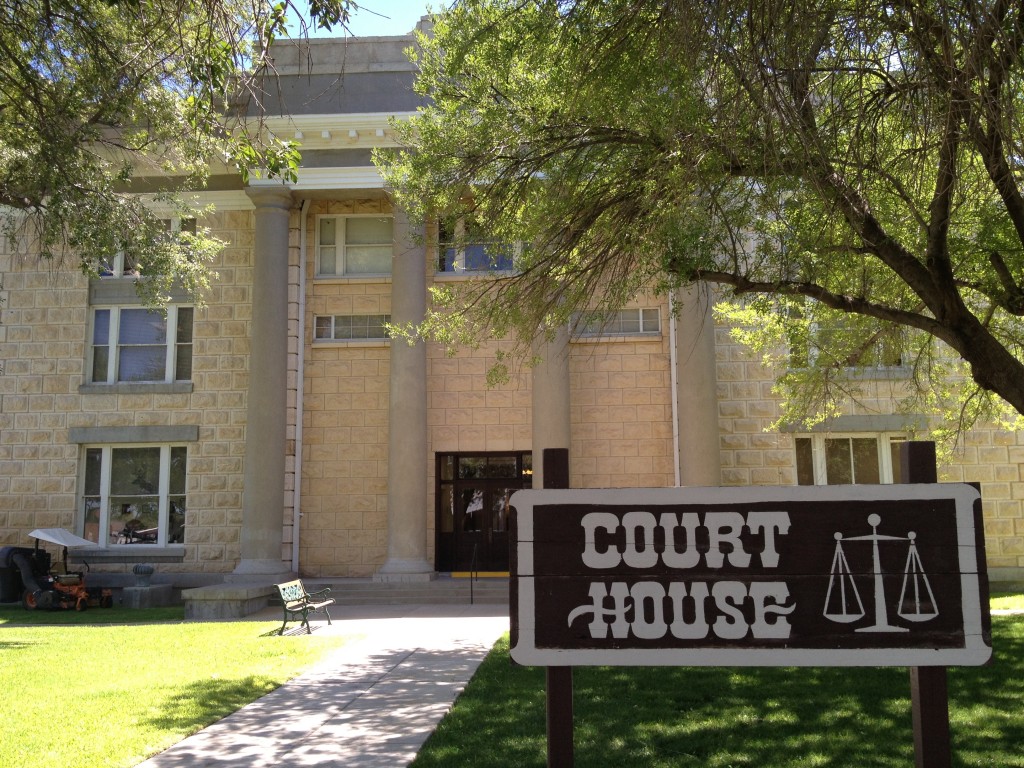 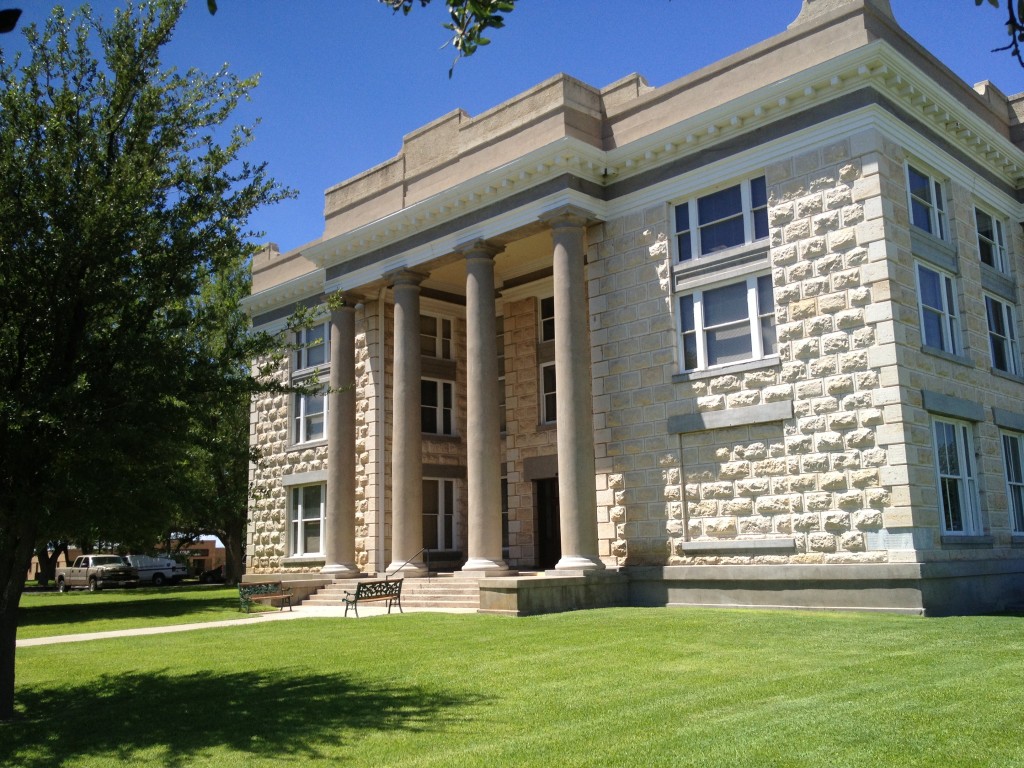 …and the eastern side faces S. Main Street.

The cornerstone gives no credit to any architect of the 1883 structure; only L.B. Westerman. As you can see, the information on the stone seems to convey that L.B. Westerman was the contractor, and Falls City Construction Company (who WAS the contractor) was the architect. This is incorrect. 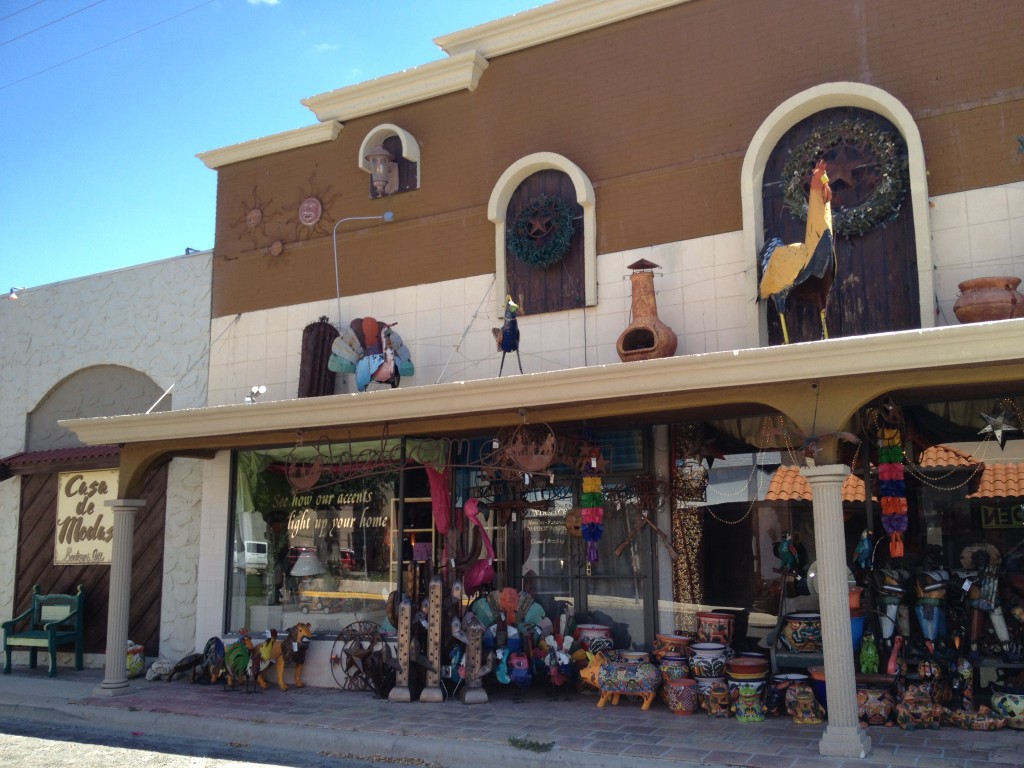 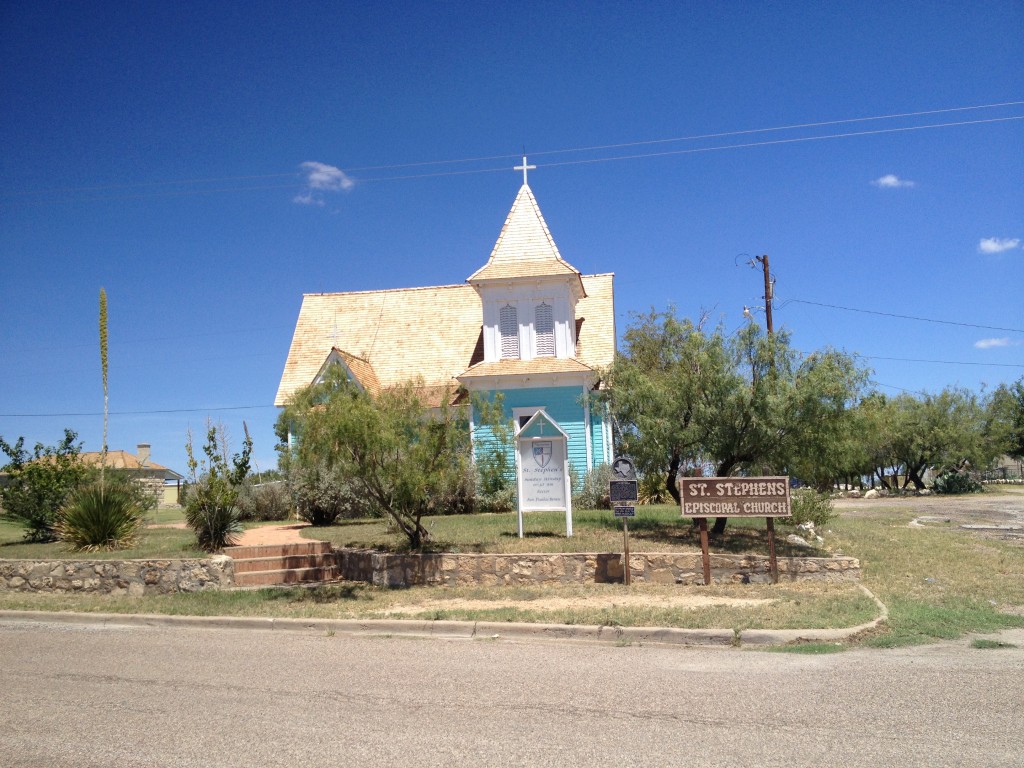