“The county occupies 891 square miles of the East Texas Timberlands. The terrain is level to gently rolling; its elevation ranges from 200 to 450 feet above mean sea level. The county is drained by the Red and Sulphur rivers, which form its northern and southern boundaries. Most of the soils are either loamy or clayey. Mineral resources include oil, gas, lignite, and ceramic clay. The county also has abundant forest lands, and in 1981 its timber production totaled 10,292,035 cubic feet.”

“Because the area of Northeast Texas encompassing present Bowie County was considered by many to be part of Arkansas, it was the site of some of the earliest white settlement in Texas. Hunters and traders were active in the area by 1815, and in contiguous Red River County permanent settlement was underway by 1818. Although the details of earliest settlement in Bowie County are not clear, the area was probably settled around 1820, when Miller County, Arkansas, was organized. This county encompassed not only what is now Bowie County, but all of the Red River settlements.”

“Bowie County was demarked in December of 1840 and named for James Bowie. As originally delineated, the county included all or part of the territories of present Cass, Titus, and Morris counties. In 1846 the county was reduced to its present size and boundaries with the establishment of Cass and Titus counties. DeKalb, in the western part of the county, was designated temporary county seat, while a commission was appointed to choose a more appropriate permanent site. The commission chose the town then named Boston, which became the county seat in 1841.”

“At the time of the Civil War, Boston, the county’s largest town, had a population of only 300 or 400. Most county residents were employed in agriculture, and cotton was the county’s most important cash crop. The production of cotton began in the 1830s and expanded steadily. The county’s farmers reported a crop of 1,113 bales in 1849 and 6,874 bales in 1859. Although cotton was clearly predominant, livestock was also important to the county’s economy. In 1860 Bowie County farmers reported a total of 12,819 swine, 3,281 milk cows, 1,160 working oxen, 7,601 other cattle, and 1,331 sheep.”

“Bowie County was never invaded, and it thus escaped the physical destruction that devastated other parts of the South. Nonetheless, the war years were trying times for the county’s citizens. In addition to concern for loved ones on the battlefield, citizens were forced to deal with disruptions to the local economy caused by the unstable Confederate currency and the lack of a market for their cotton. The end of the war brought wrenching changes in the county’s economic foundation.”

“Though agriculture was the foundation of the county’s economic base, the county was never exclusively agricultural. Manufacturing provided jobs for a small portion of the labor force in 1850, when fourteen persons were employed to make products valued at $12,100. Between 1880 and 1890 the county experienced a small boom in manufacturing. In 1880, 185 people were employed to make products valued at $417,840. By 1890 the number of people employed had jumped to 1,157, and the annual product was valued at $1,757,425.”

“When the Texas and Pacific Railway was constructed through the county, beginning in 1873, towns along its route began to garner an increasingly larger share of the market activities of area farmers. The railroad also was responsible for a new town, Texarkana, which, almost from its founding, served as a major market center and shipping point for farmers in the surrounding three-state area. By 1900 the 5,256 people who lived on the Texas side of Texarkana comprised almost 20 percent of the population of the county. By 1930 the 16,602 people in that part of the town amounted to 34 percent of the population of the county.”

“Like most other areas of the country, Bowie County was hit hard by the Great Depression. For the agricultural sector of the county the effects of the depression were becoming apparent by 1930, when the average value of county farms fell from the 1920 value of $3,498 to $2,373. The effect of the depression on manufacturing is not so obvious because that segment of the county’s economy was not really depressed until after the census of 1930 had been taken, and by the census of 1940 recovery was underway.”

“Changes in consumer products also led to decreasing demand for cotton, and production of the staple declined to 20,168 bales in 1940 and to 9,015 bales in 1950. Cotton remained a major crop for Bowie County farmers through the 1960s; the 1968 crop was reported as 8,938 bales. But Bowie County farmers gradually abandoned cotton in the 1970s, so that by 1981 no production was reported. By 1982 livestock was the most important agricultural commodity, with county farmers reporting a total of 62,528 cattle. Wheat, soybeans, and hay were the largest crops in 1981, when production was reported as 391,955 bushels, 201,163 bushels, and 61,385 tons, respectively.”

“The changes in the county’s economic base were reflected in other areas. The proportion of urban residents in the county continued to increase through the census of 1980, when 64 percent of the county’s residents lived in urban areas as defined by the United States Census Office. Texarkana, situated on Interstate Highway 30 and U.S. Highway 82, remained a major market center and the county’s largest city.” 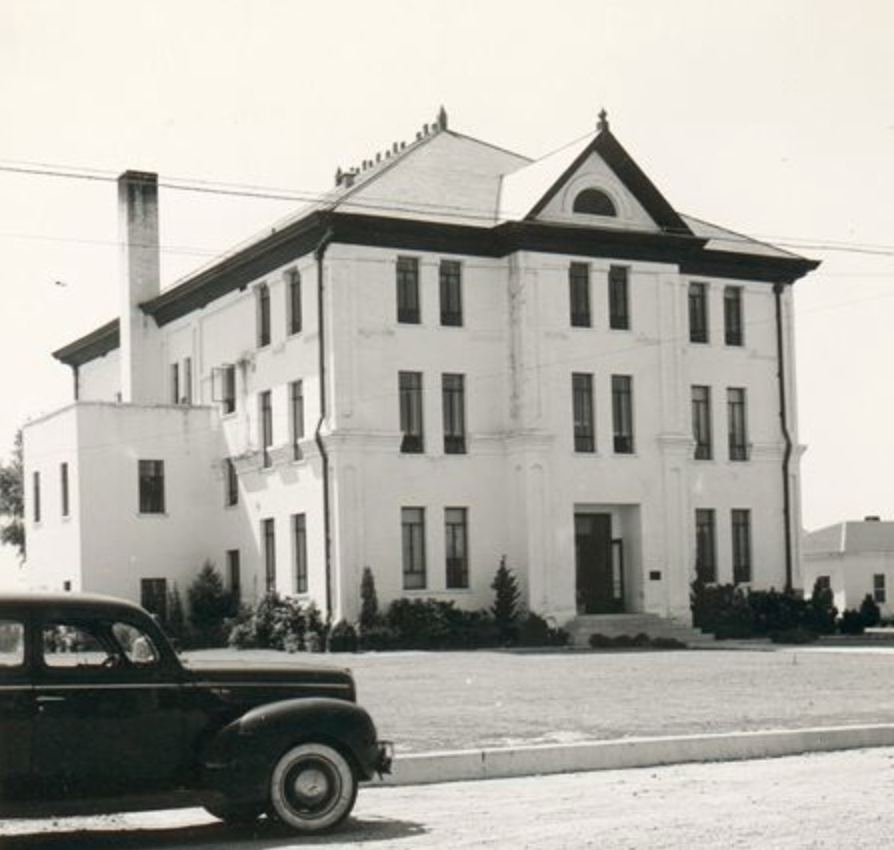 After unsuccessful tries for county seat at Old Boston & Texarkana, this courthouse helped to cement the title for New Boston. Sonnefield & Emins served as both the architects and contractors. The building was also originally graced with a stately tower, but that was removed sometime in the twentieth century.

A new, much more modern courthouse was built in 1985, and this building became defunct (but it stood for four more years). In 1989, an arsonist set fire to the historic courthouse, and a significant piece of Bowie County history was lost forever.

Today, the courthouse lawn has been turned into a public park, with a monument marking the location of the old building’s foundation.

The architects involved here were of the firm Thomas & Emberton Assoc., while the T.A. Pritchard Co. provided its construction.

There’s not much more to say about this building except that, as is the trend nowadays, this modern courthouse sits just off the Interstate. There’s no downtown square in sight. 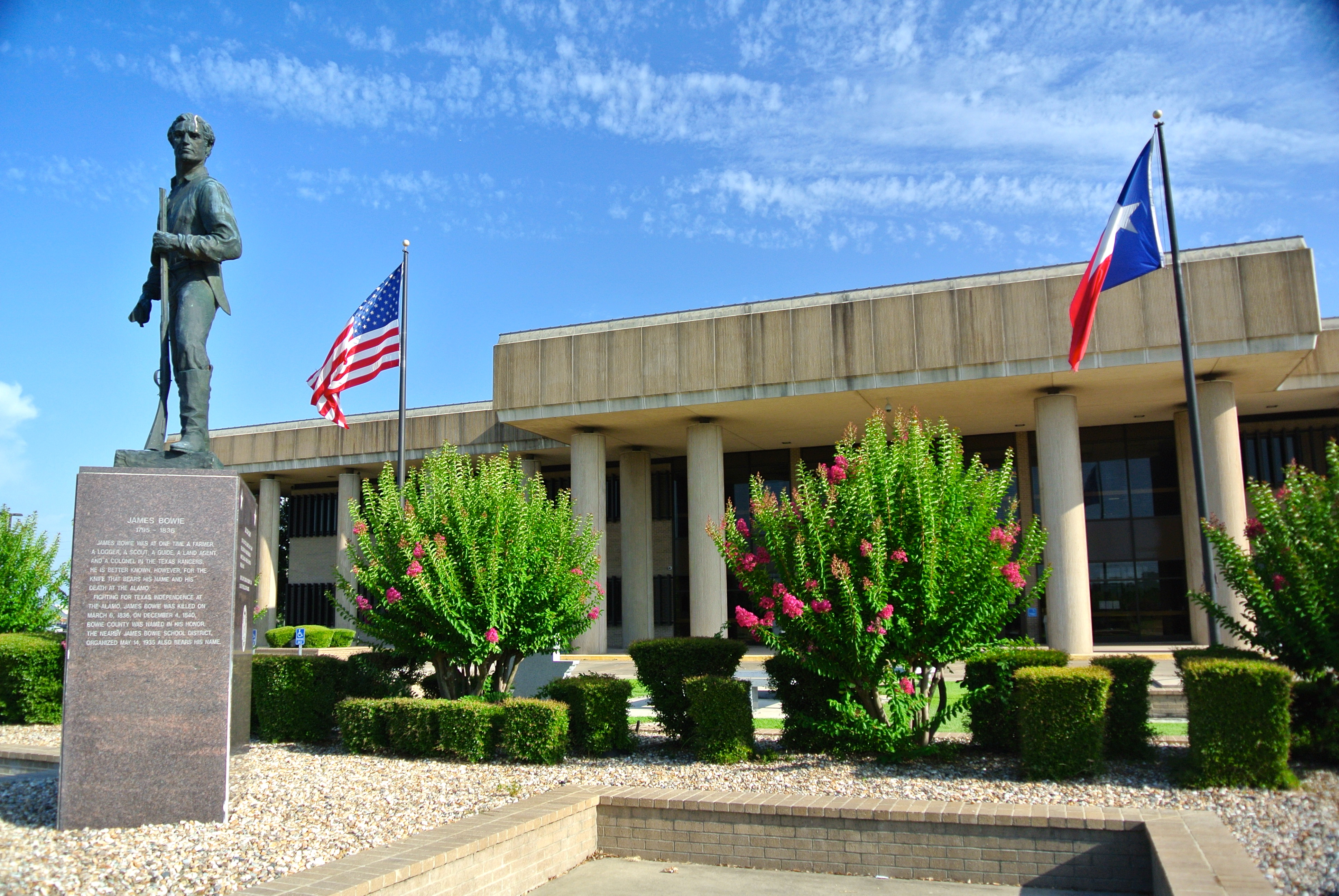 The main entrance is decorated with a small garden and a statue of county namesake, Jim Bowie. 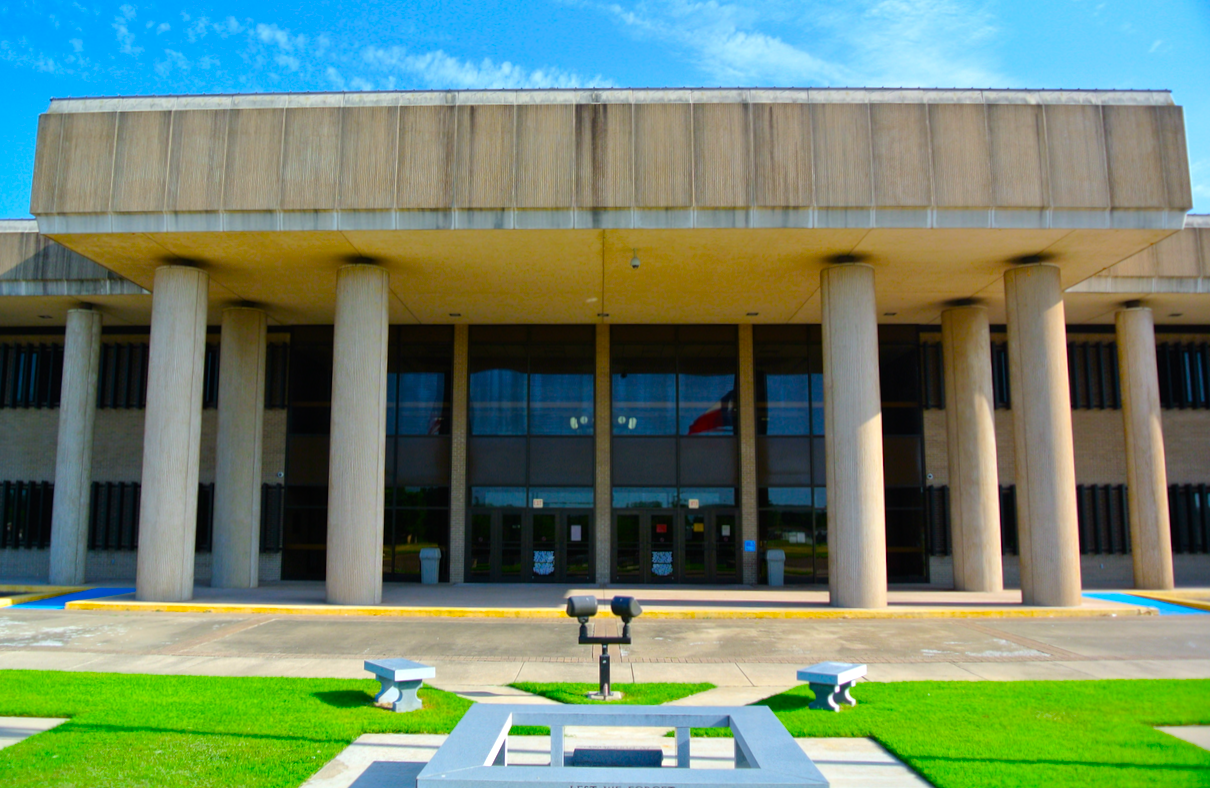 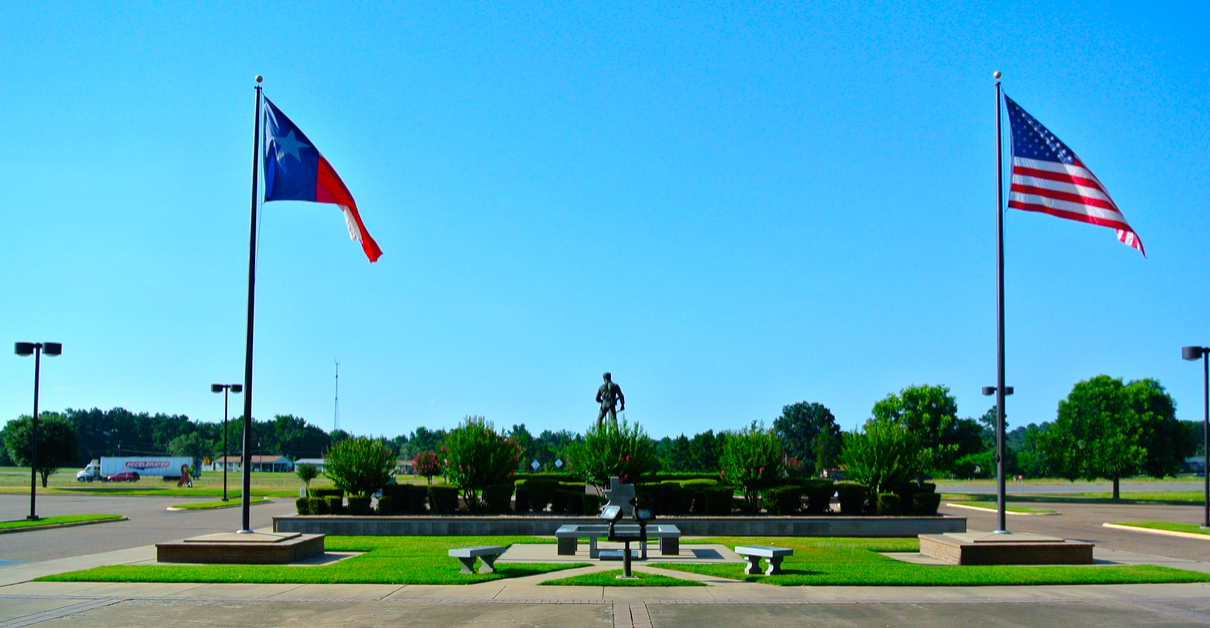 The front courtyard, statue & I-30, as seen from the main entrance 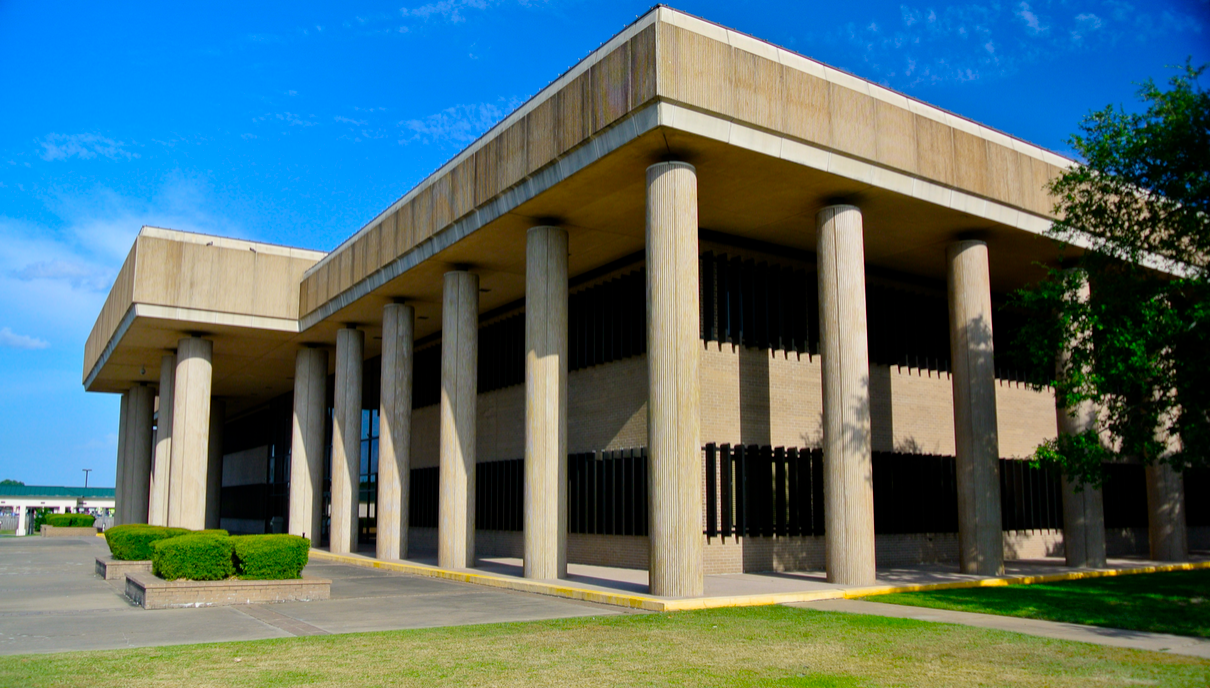 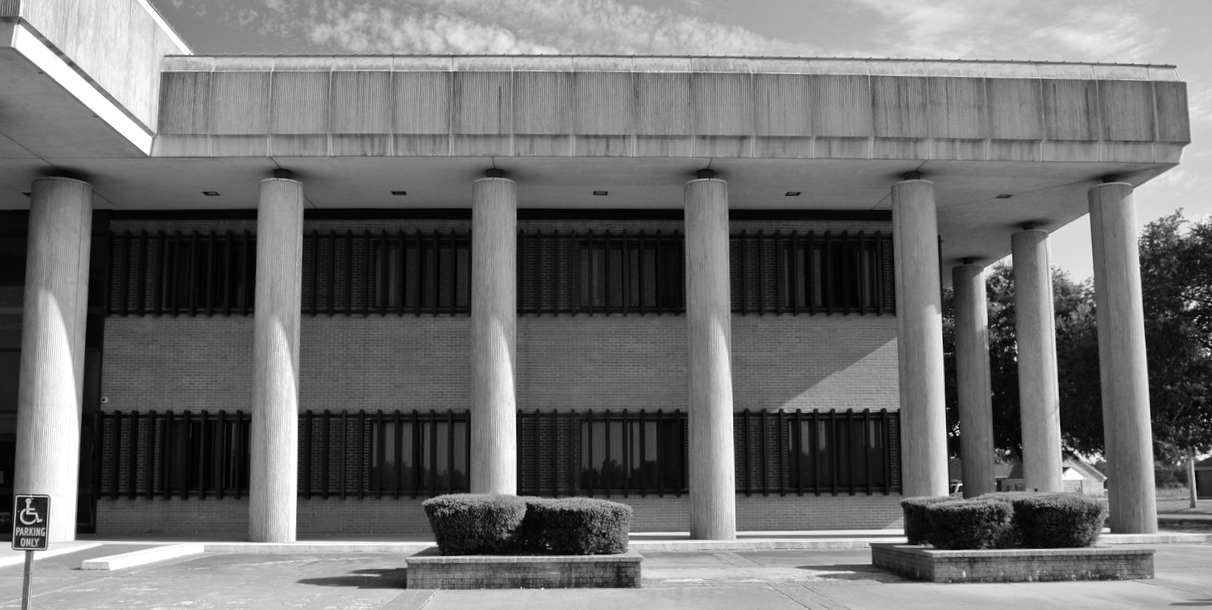 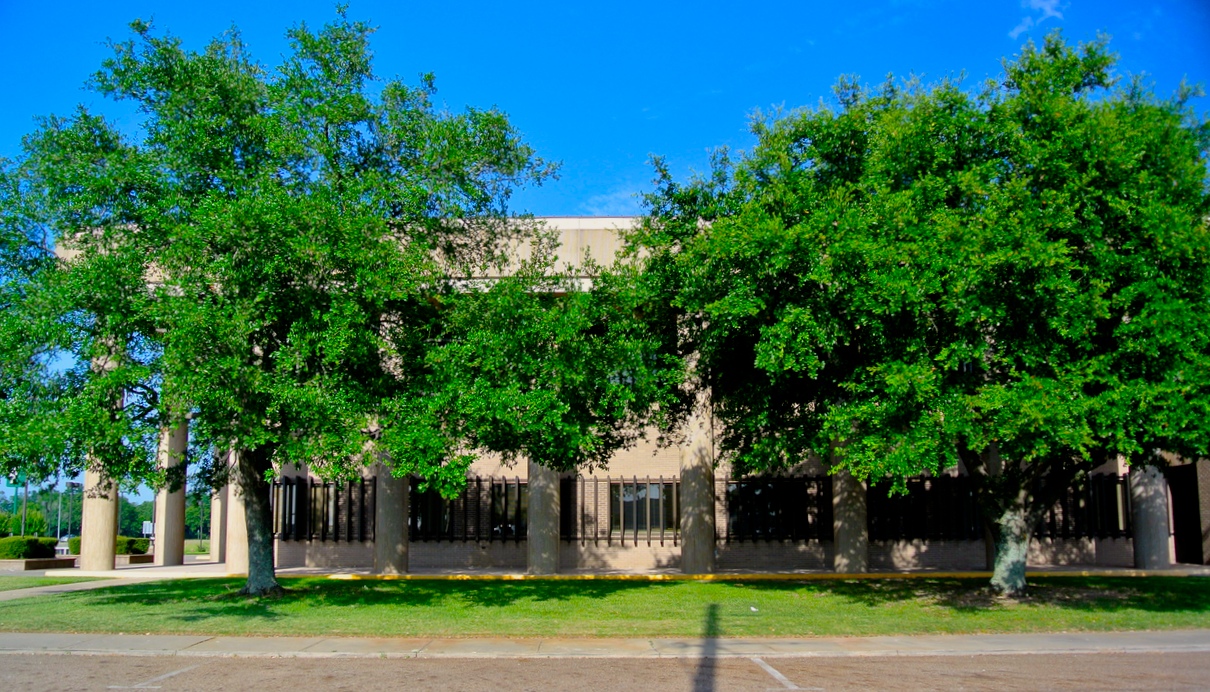 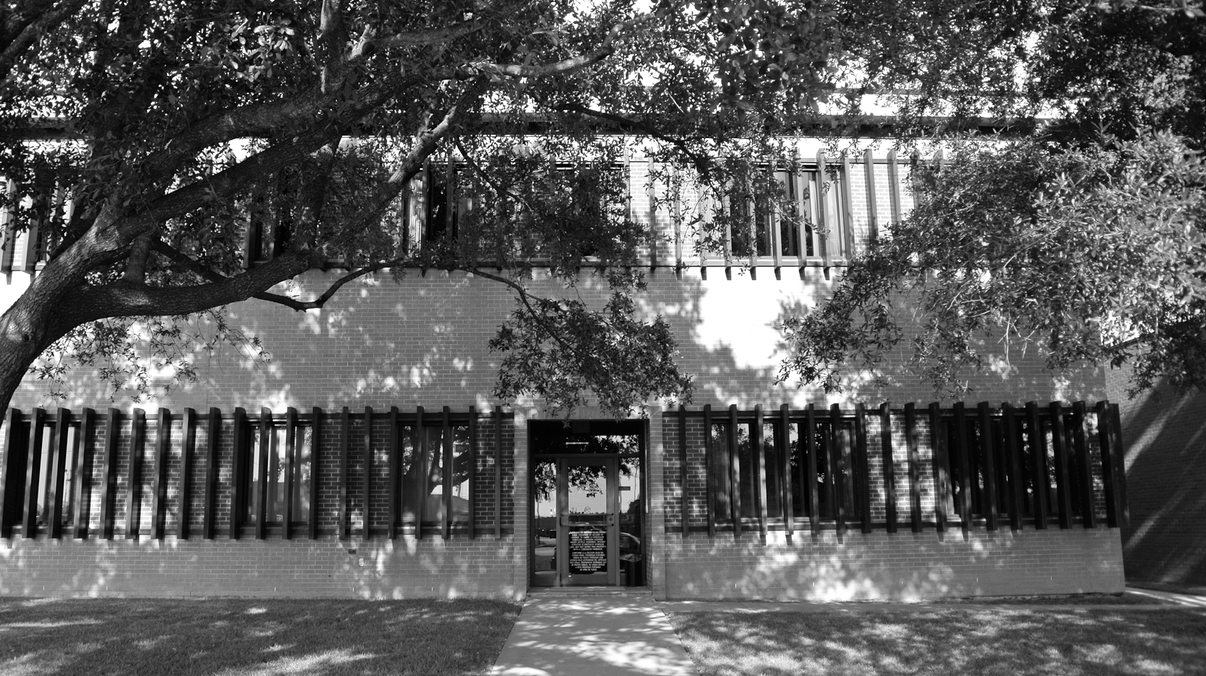 The western entrance is a lot less grand than the northern one.

The southern façade (nothing pretty to look at here)

This entrance doubles as the service one. 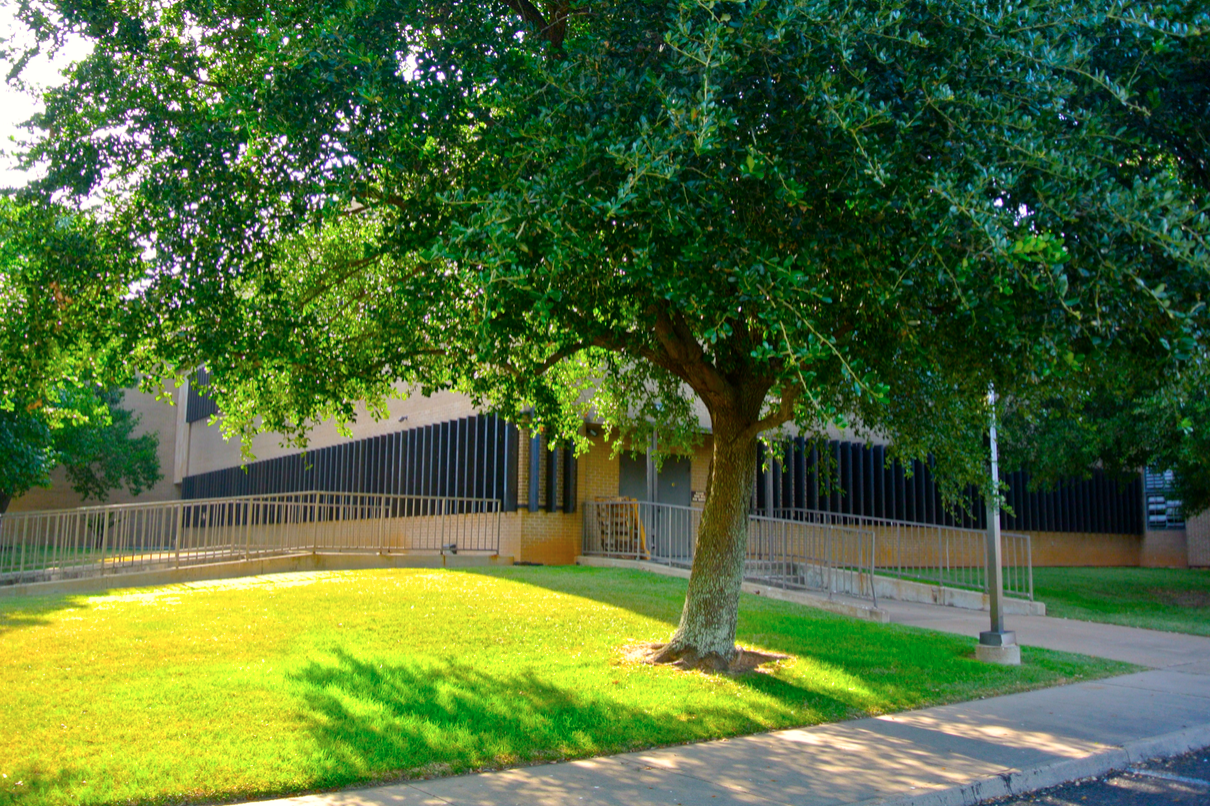 Along the eastern façade 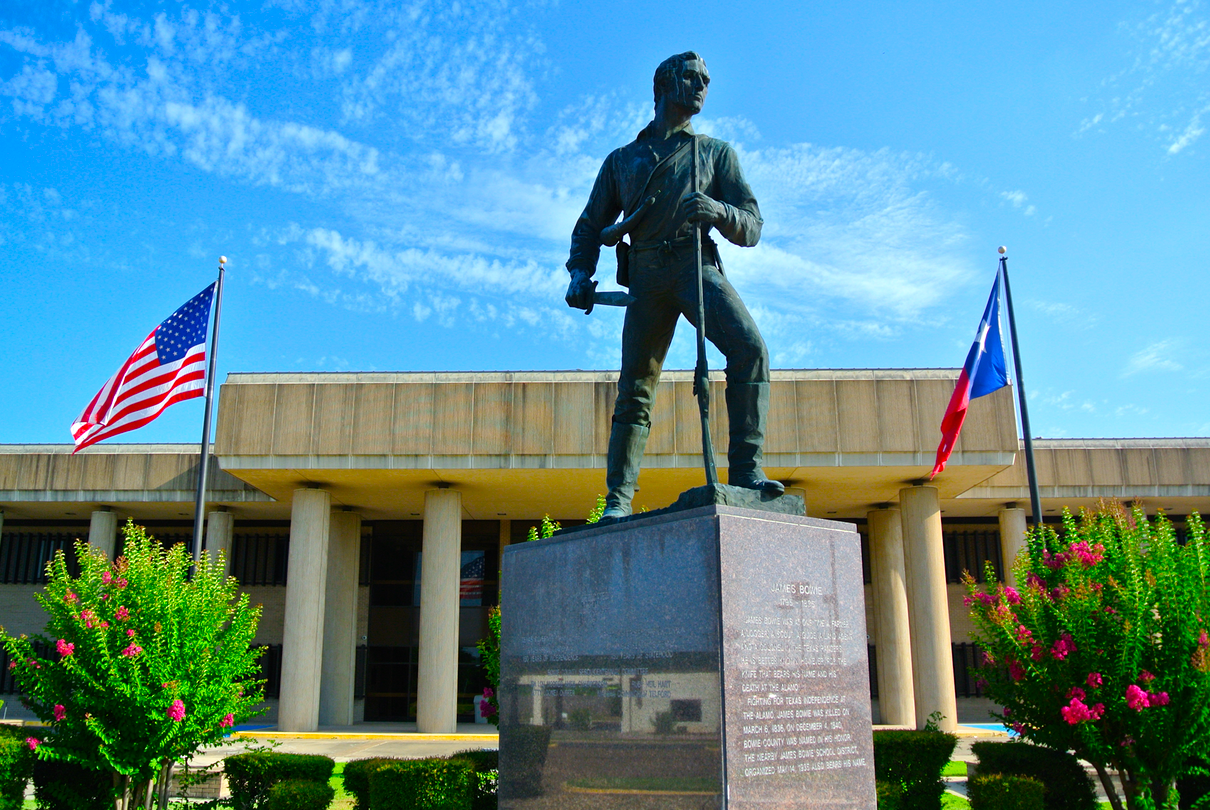 Knife in hand, Bowie stays on the watch for the safety of his county.