“Red River County occupies 1,054 square miles of the East Texas timberlands. The terrain is gently rolling with an elevation ranging from 300 to 500 feet above sea level. The county is drained by the Red River and the Sulphur River, which form its northern and southern boundaries.”

“It may be that the first Europeans to enter the county were Frenchmen under the command of Jean Baptiste Bénard de La Harpe during his expedition of 1718–19. Shortly thereafter, the French established Le Poste des Cadodaquious in the territory of present-day Bowie County. During the decades when small groups of French soldiers, hunters, trappers, and traders occupied the fort, they probably passed through Red River County on numerous occasions.”

“During the First Congress of the Republic of Texas, the Red River district was little more than a vaguely defined area encompassing all or part of the land of thirty-nine present counties. Red River County was formally delineated by an act signed by President Sam Houston on December 14, 1837, which divided the Red River District into two counties, Fannin and Red River. Red River County, as defined by the 1837 act, included all or part of lands now belonging to Lamar, Hopkins, Delta, Franklin, Titus, Morris, Cass, Marion, and Bowie counties.”

“New counties established in 1840 and 1846 reduced Red River County to its current size. From its founding the county grew in population slowly but steadily. By 1860 residents numbered 8,535. As in many other parts of North Texas, problems with adequate transportation probably served to inhibit the county’s growth. The Red River was generally navigable for a part of the year, but when the river was low, produce and supplies had to be hauled to and from Jefferson, 100 miles to the southeast. The population of the county was overwhelmingly rural.”

“With most citizens involved in agriculture, the county had no large towns and few manufacturing establishments. The 1860 census of manufactures listed just thirteen establishments employing only eighty-five people. Following the decline of Jonesborough in the early 1840s, Clarksville became the county’s largest town. In 1858 it had a reported population of only 400. Each antebellum community in the county—Robbinsville, Savannah, and Halesboro are examples—comprised little more than a general store, a gin, and perhaps a mill, with a few scattered houses.”

“The end of the Civil War brought changes in the county’s economic foundation. While the end of slavery meant freedom for blacks, to white slaveholders it was a serious loss of capital. The 2,513 slaves listed on the 1860 tax roll were evaluated at $1,577,909. This represented 49 percent of all taxable property in the county. This economic loss coupled with the widespread belief that free blacks would not work and the uncertain status of the South in the nation, led to a loss of confidence that caused property values to plummet in 1865. On the 1865 tax roll total taxable property fell by the value of the slaves plus an additional $384,456.”

“1876 the Texas and Pacific Railway was completed through the county, and for the first time residents had relatively quick and dependable transportation to larger market centers. Adequate transportation may have led to the dramatic increase in population from 10,653 in 1870 to 17,194 in 1880. The coming of the railroad also meant the decline and eventual demise of communities such as Starkesville, Stephensboro, and Savannah, while the towns of Annona, Avery, Bagwell, and Detroit sprang up as railway shipping points. In 1913 another railroad, the Paris and Mount Pleasant, was built through the southwestern corner of the county with Bogata and Johntown as shipping points; the road was abandoned in 1956.”

“Like most areas in the country, Red River County was hit hard by the Great Depression of the 1930s. By 1935 there were 2,585 county workers on federal relief programs. Most of these (1,852) were white. As late as 1940, 13.7 percent of the labor force was either unemployed or working on public works projects. Both the value and the number of the farms in the county fell sharply from 1930 to 1940. Hard times, increasing mechanization, and opportunities for employment elsewhere brought a reversal in the long-term trend of increasing farm tenancy.”

“Agriculture remained dominant in the local economy, with an average yearly income estimated at $28 million, but manufacturing had become increasingly important after the 1940s. By 1982 Red River County had twenty-four manufacturing establishments that employed 1,300 people and had a payroll of $12.6 million. Hard times for most farmers generally meant hard times for many in Red River County. In 1979 an estimated 20.5 percent of all families in the county lived below the poverty line. By then the county had 225 businesses.”

“In terms of per capita income Red River County ranked number 233 out of the state’s 254 counties in 1981. The county remained essentially rural; almost 70 percent of the population lived in rural communities or on farms or ranches; 4,917 people, about a quarter of the county’s population, lived in Clarksville.”

“Clarksville (population, 3,096) is the county’s seat of government and its largest town. Other towns include Bogata (1,094), Detroit (687), Annona (300), and Avery (463). The Red River County Historical Society holds a bazaar in Clarksville in October.” 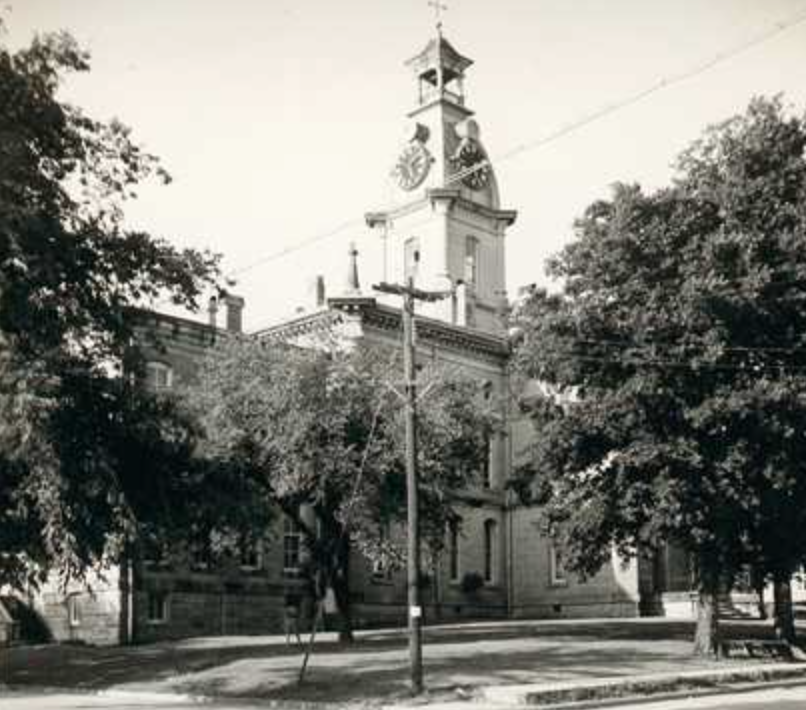 A total of three courthouses were built in Red River County before the current building, but no pictures seem to have survived of any of them. Nor, it seems, has any readily available information.

From the Texas Historical Commission:

“In the early 1880s, Red River County decided it needed a larger courthouse. Because the town square was too small to accommodate a larger building, the decision was made to move the new structure off the square. A plot of land one block north of the square was purchased for the sum of $2,000 for the new courthouse, and the first stone was laid on March 17, 1884. W. H. Wilson, a Dallas architect, was awarded the commission to design the building. P. C. Livingston of Monroe, Louisiana was selected as the contractor. In 1884, the cornerstone, a white marble block with a low relief carving on the face of the blindfolded Goddess of Justice, was leveled into place by the Masonic fraternity. The courthouse’s final cost was $55, 423.49, approximately $15,000 more than had been anticipated. Though the building is cruciform in plan, the north and south projections house only stairwells. The east-west axis contains offices for sheriff, tax assessor, tax collector and county judge; entrances on each side are connected by bisecting corridors. The Red River temple of justice, incorporating Renaissance Revival features, is built with ochre-colored limestone quarried in the vicinity of the nearby community of Honey Grove. The stones have flat hammered faces and smooth margins. The base of the walls below the water table is of rock-faced ashlar. The columns and pedestals projecting from the building corners are a notable exterior feature. Annular moldings decorate the base, capital and shaft of the columns. The doors and first- and second-story windows are spanned by segmental arches, and the third level features bull’s eye windows. Bold stringcourses are employed between the first and second stories. A cornice of sheet metal, manufactured in Dallas, caps the walls, while finials project vertically above the columns. The centrally positioned tower is clad with metal, and a bold-faced clock, with dials eight-and-a-half feet in diameter, and a cupola complete the composition.” 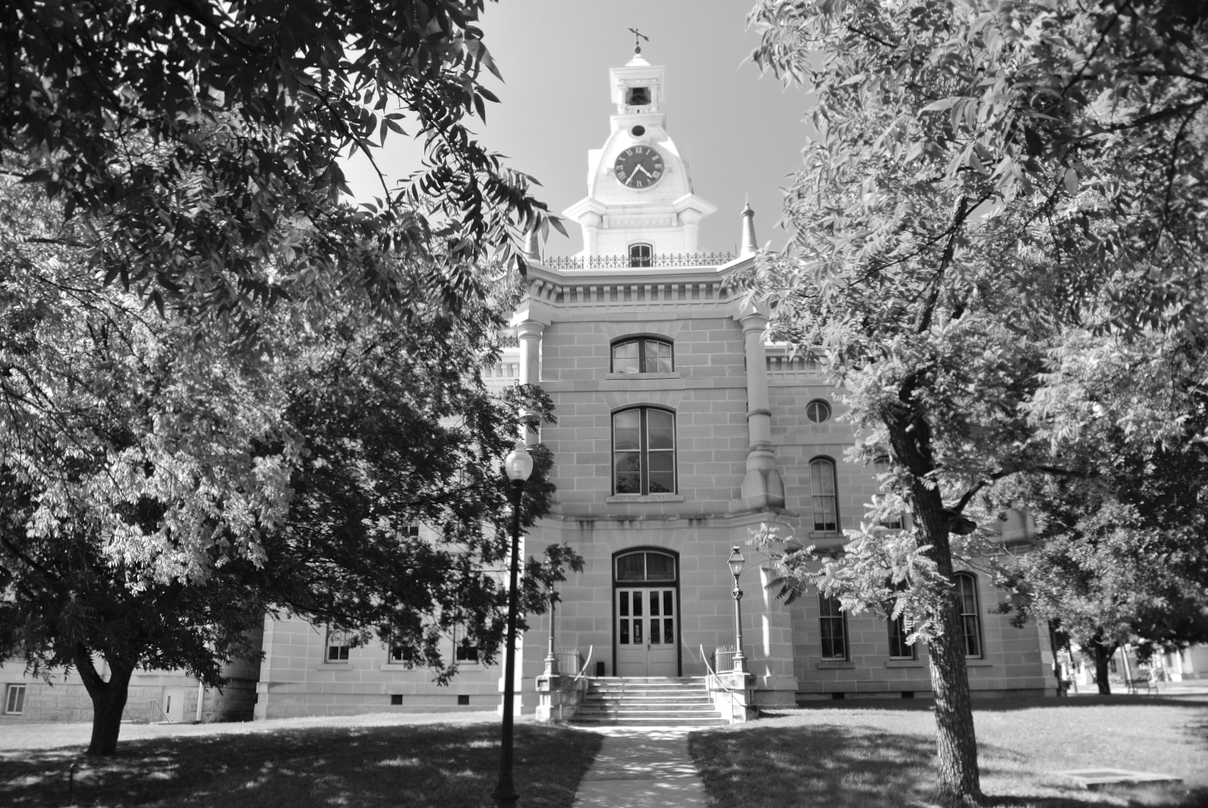 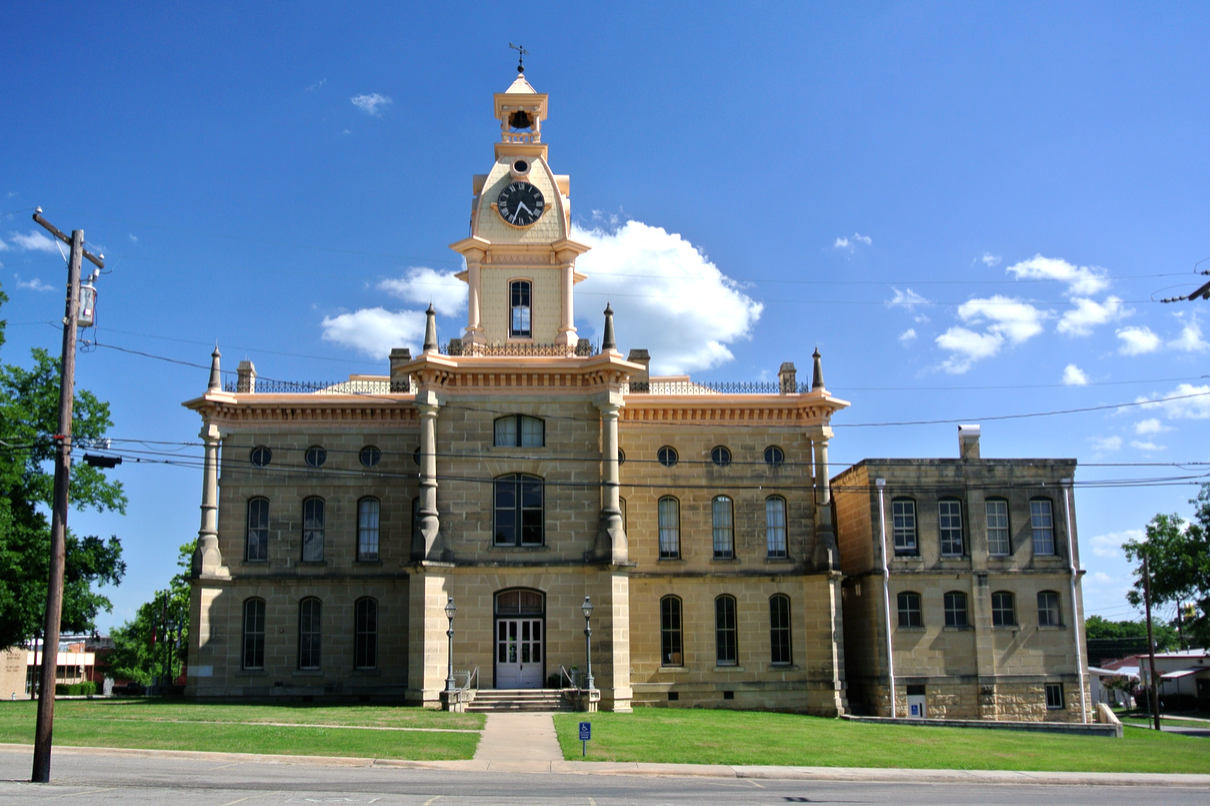 The courthouse and annex rest on a hill north of the town square. 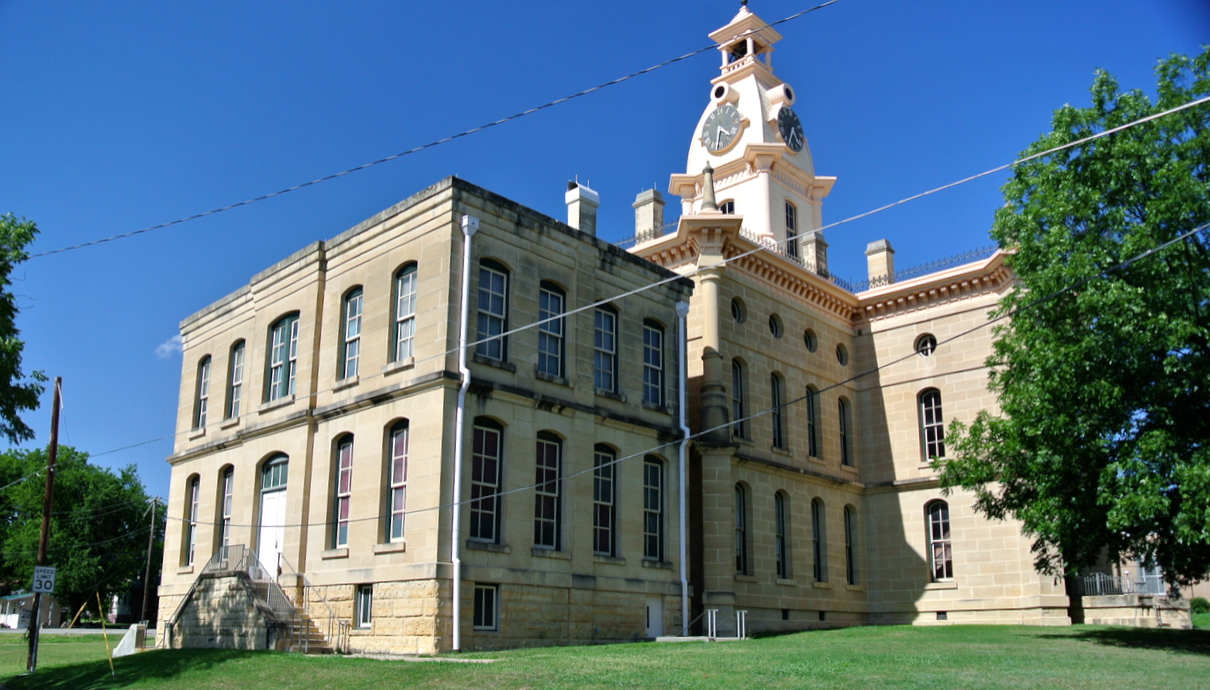 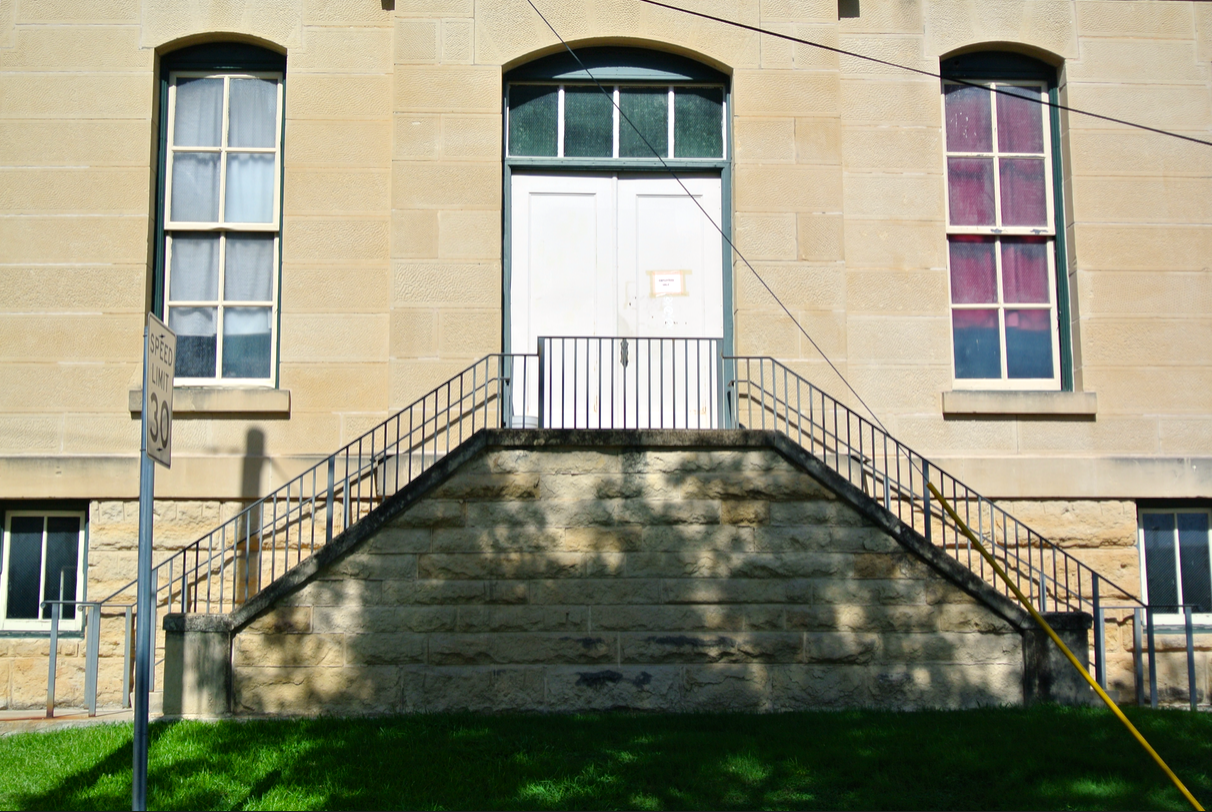 Cedar Street, near the courthouse annex 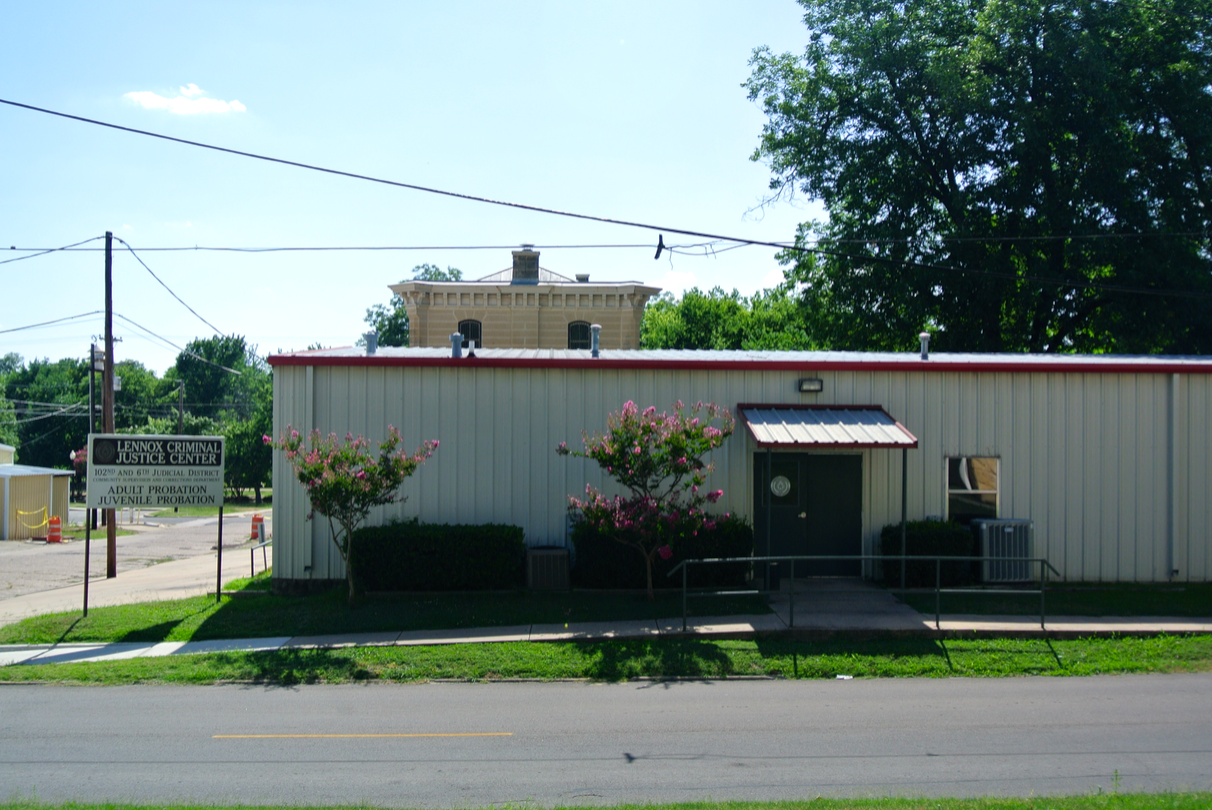 That’s the historic Red River County Jail, visible from the western entrance to the annex. 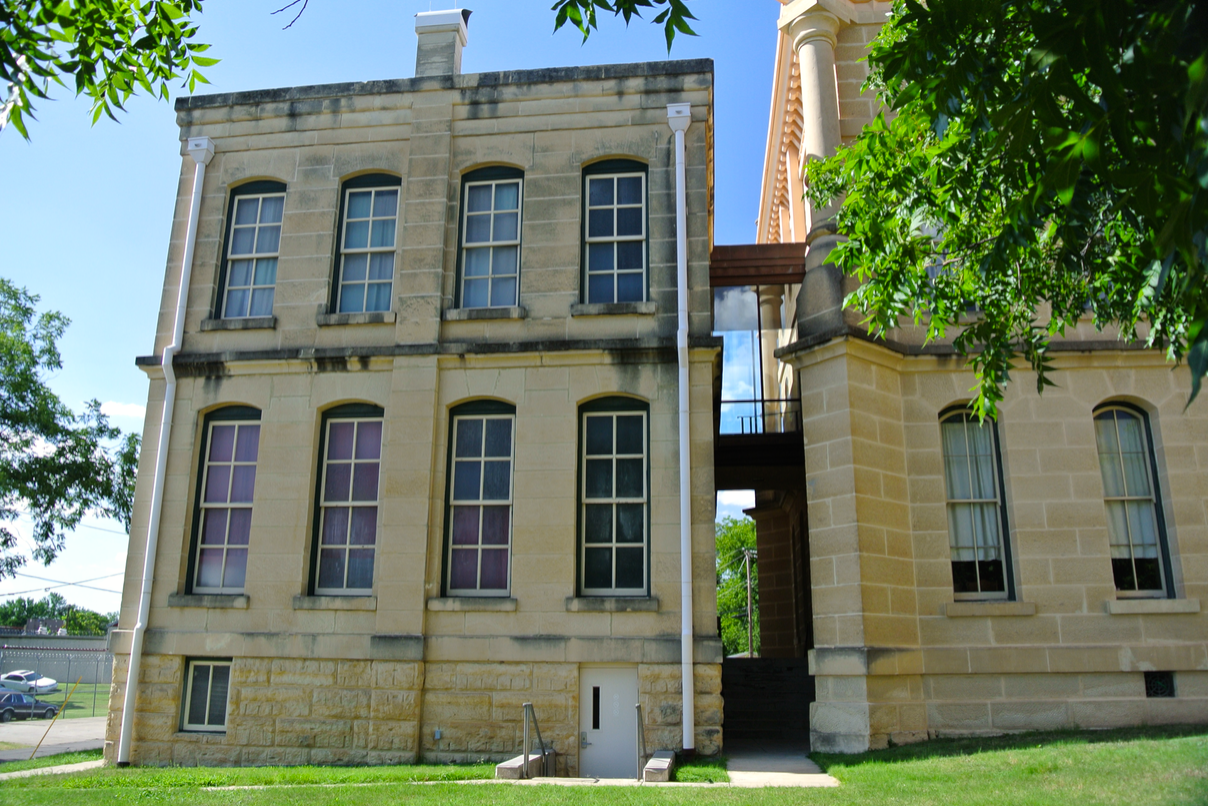 The connecting point between courthouse and annex 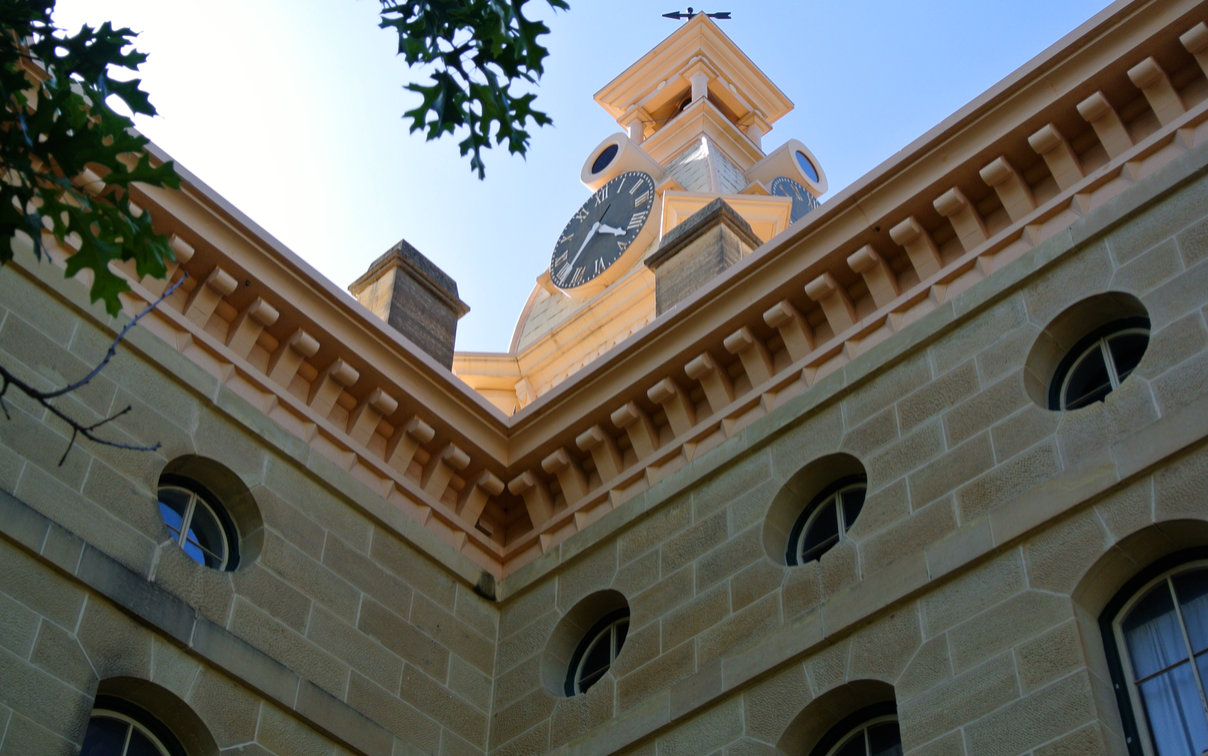 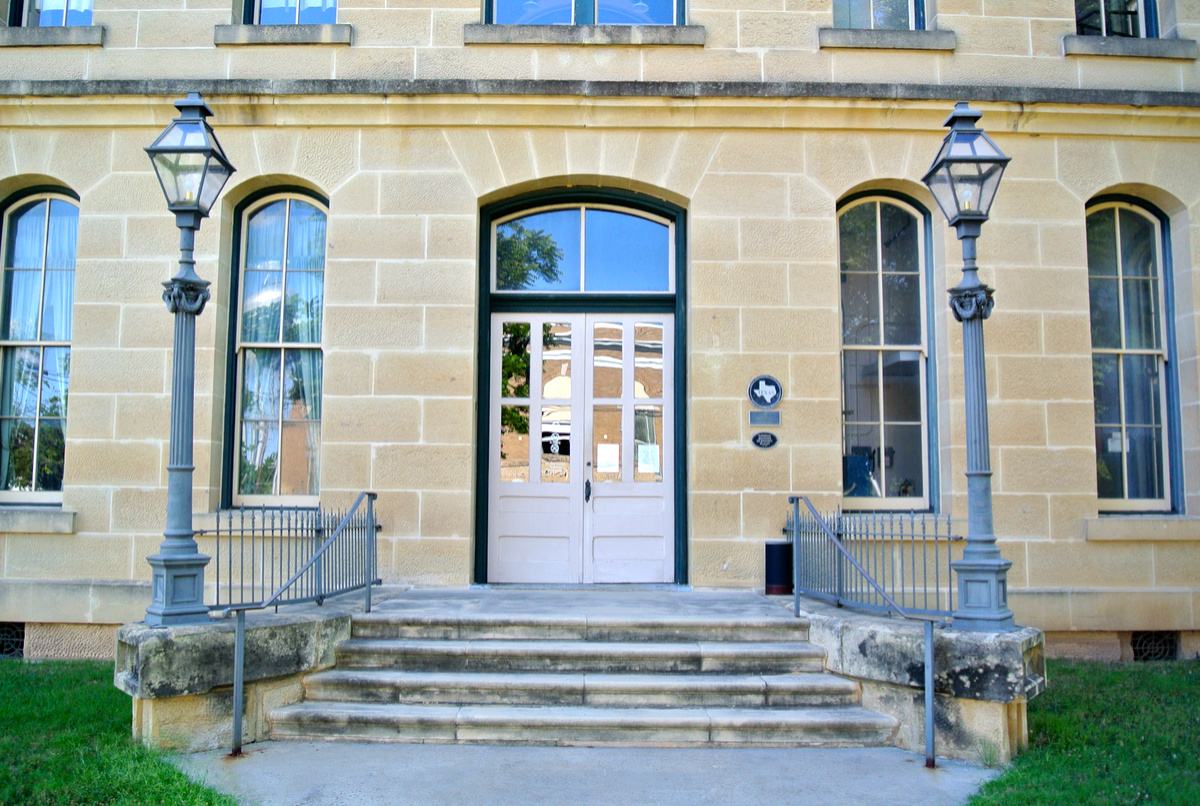 Madison Street, as seen from the southern doors 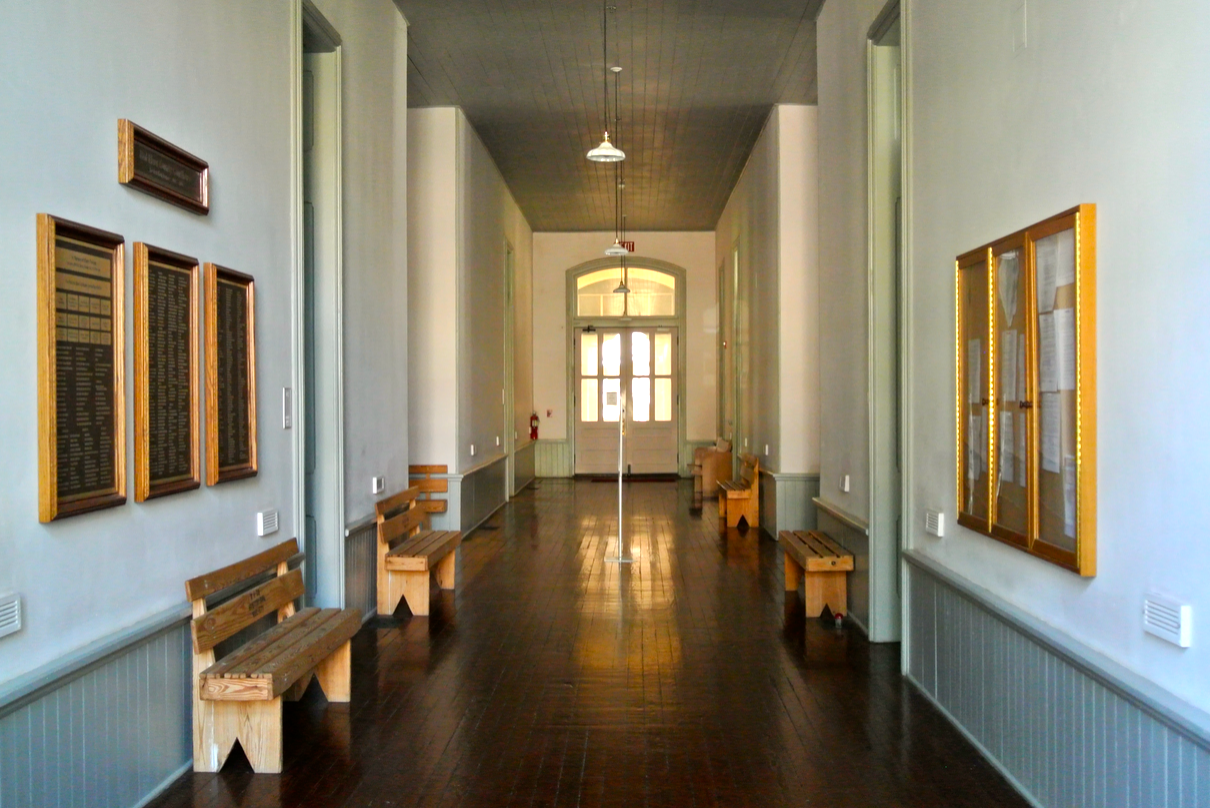 The courthouse interior, as seen through the doors 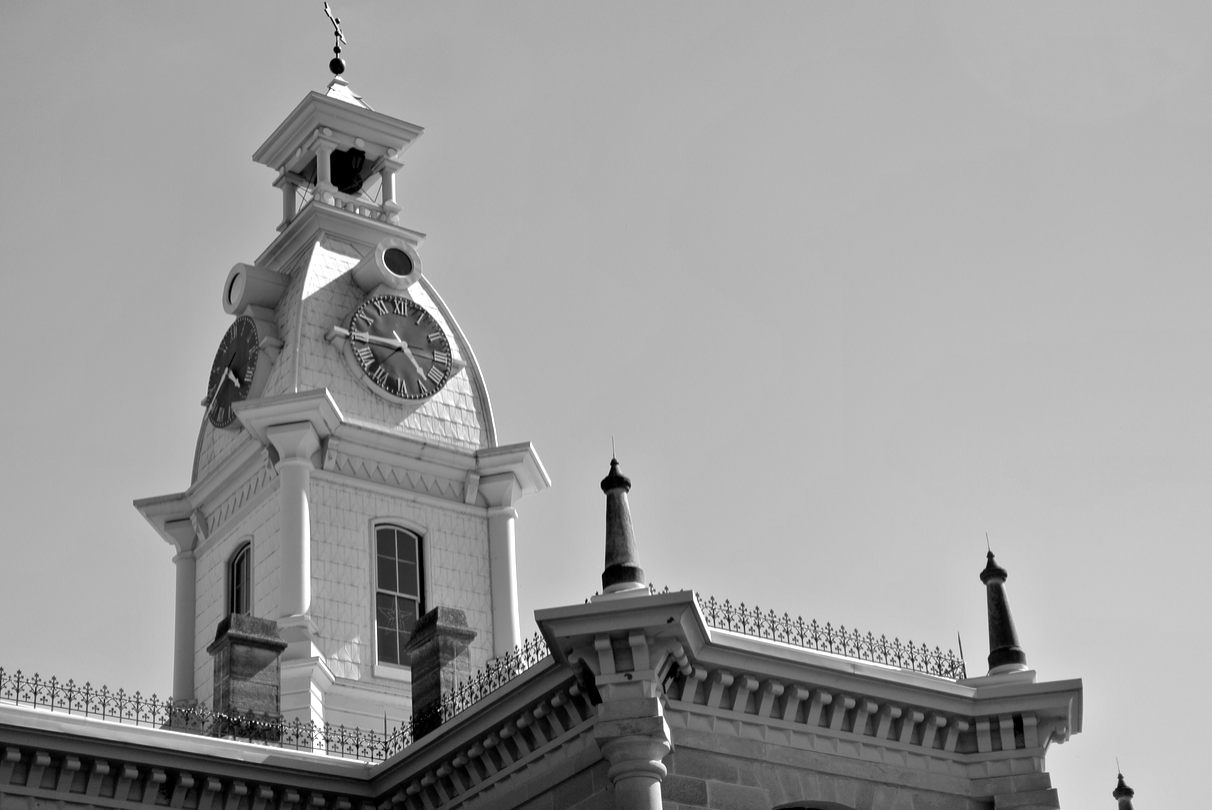 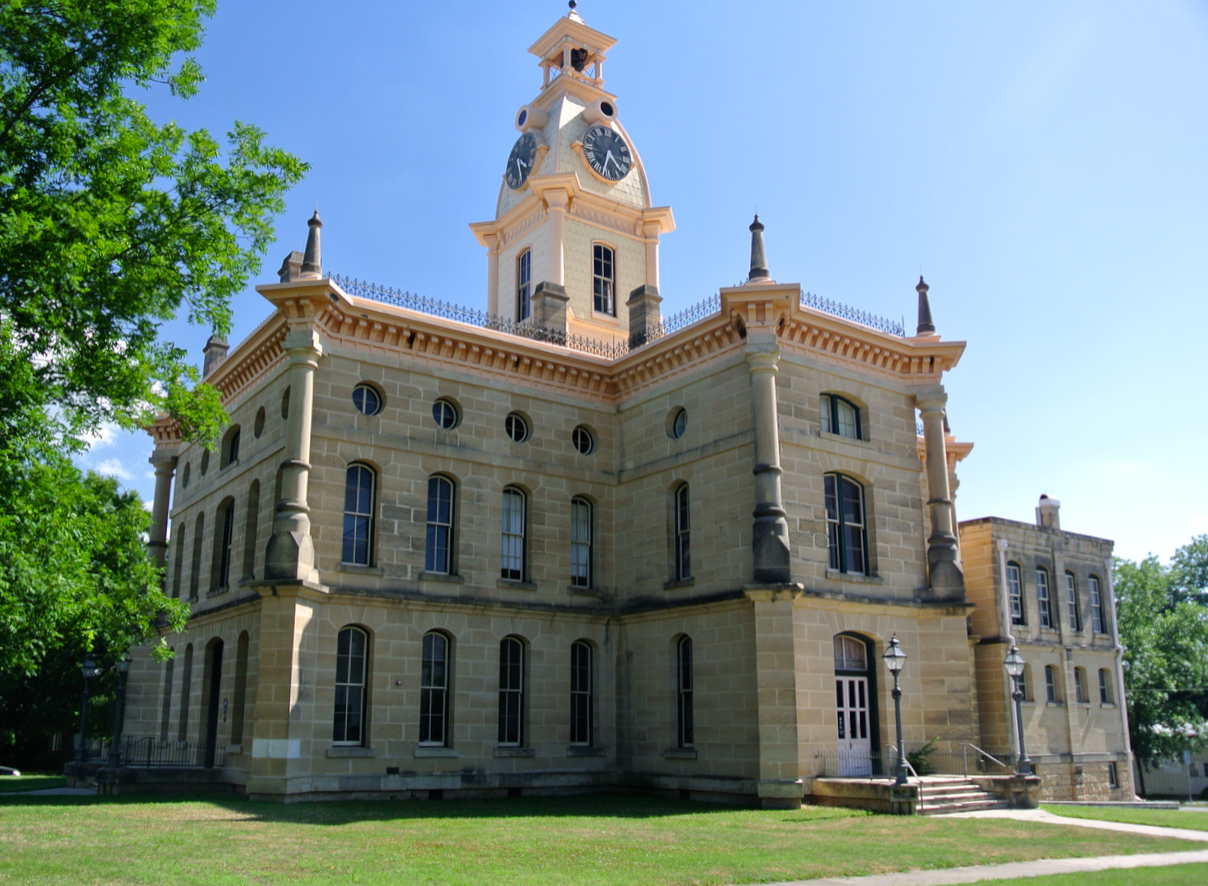 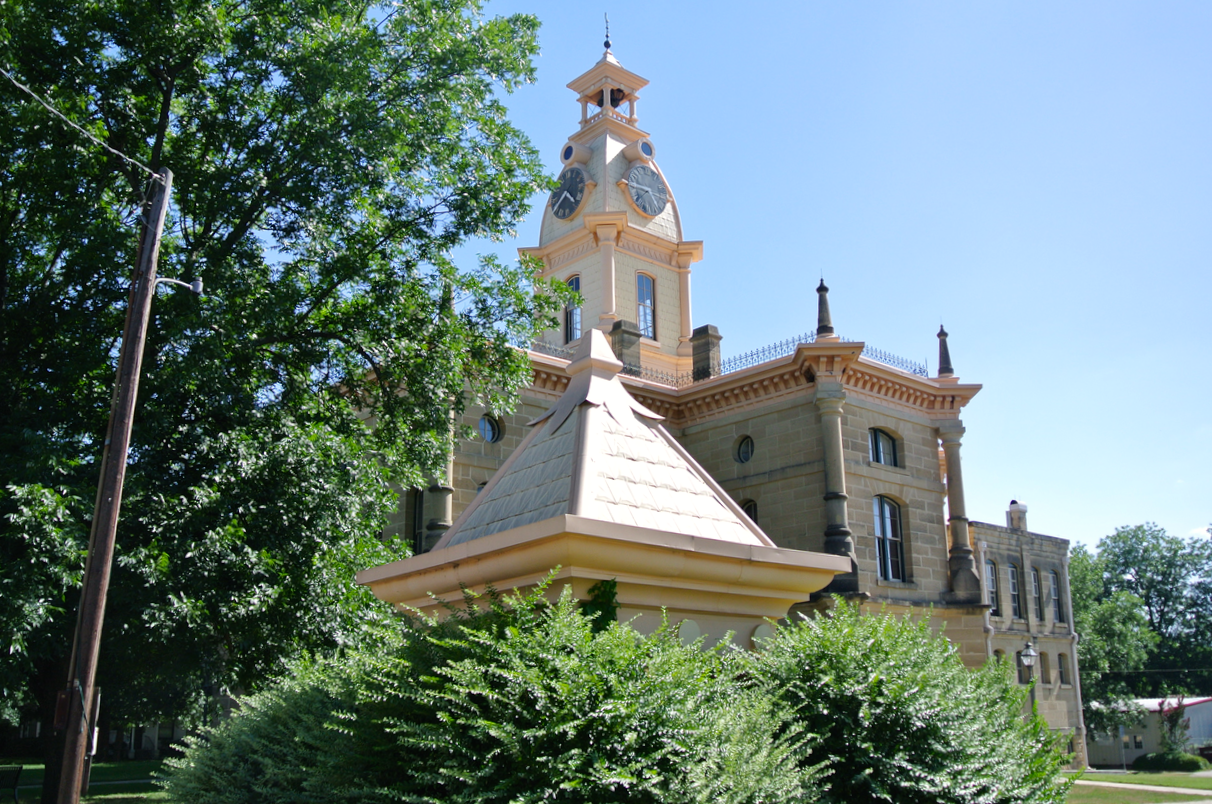 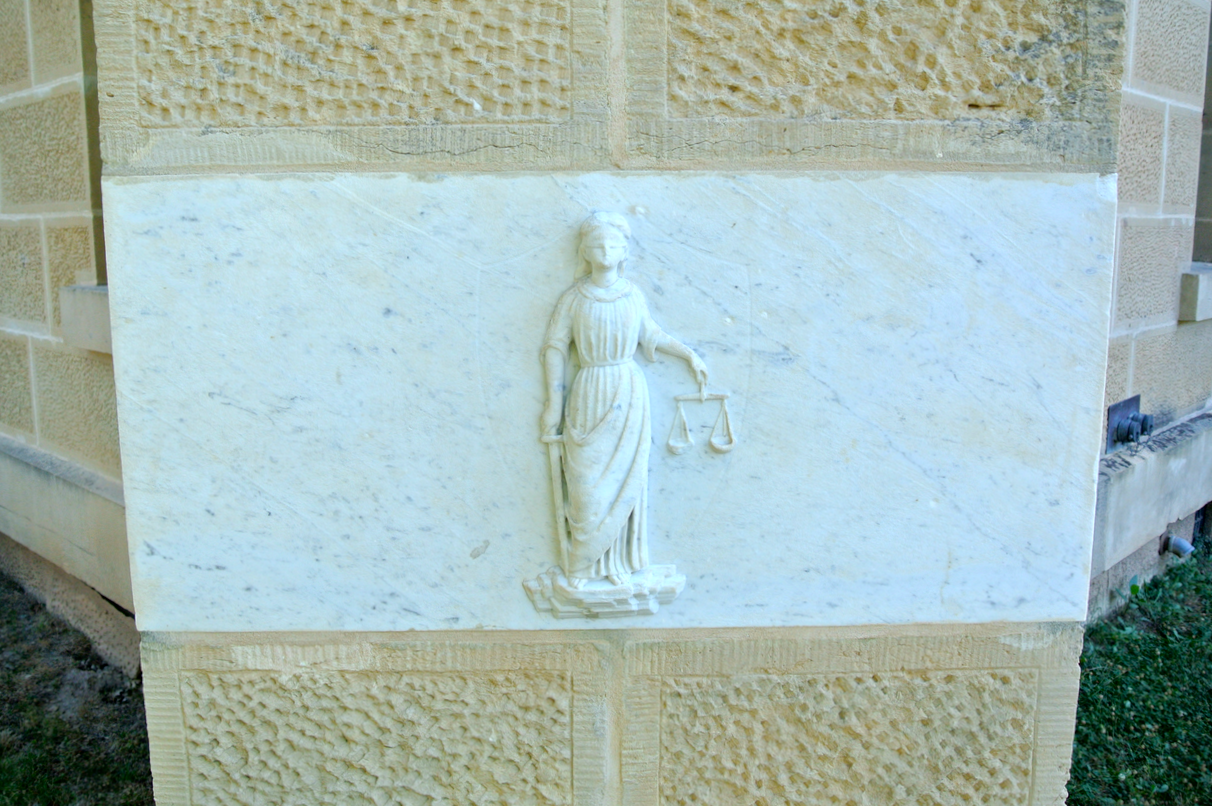 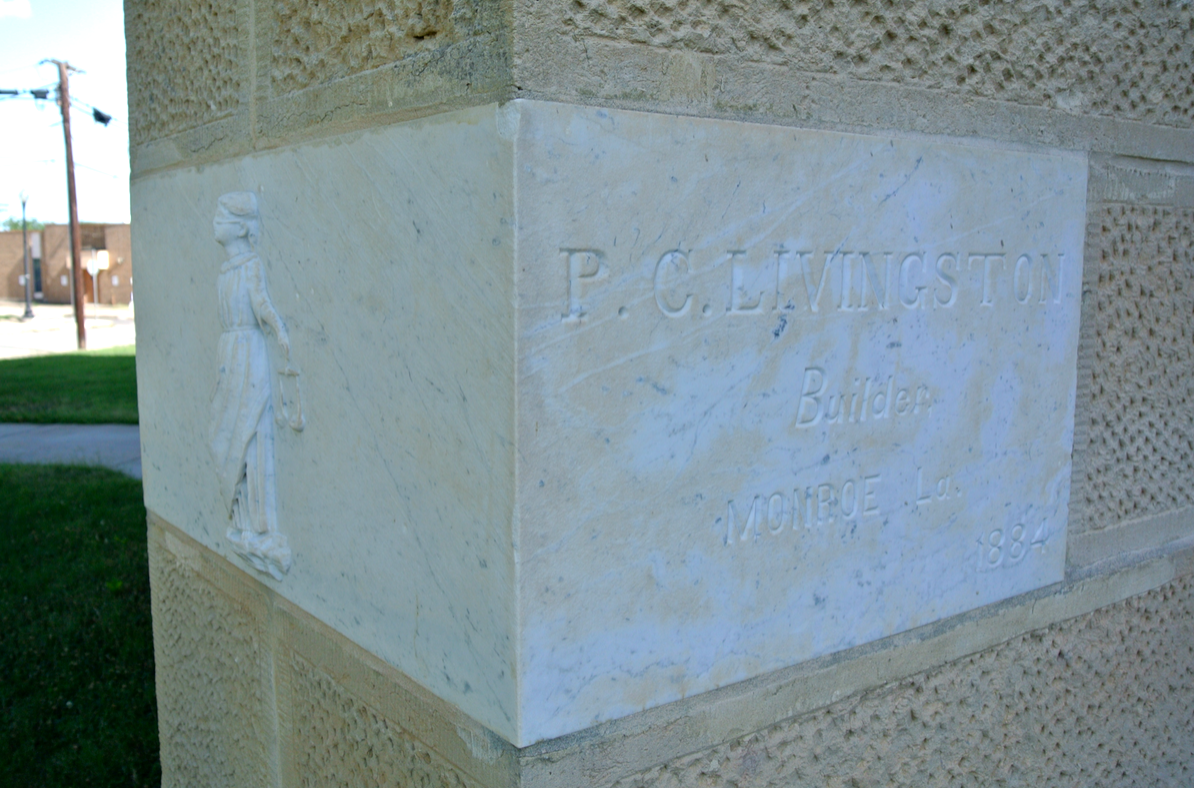 The northeast corner of the building features a three-sided cornerstone. This is a unique feature to this courthouse. 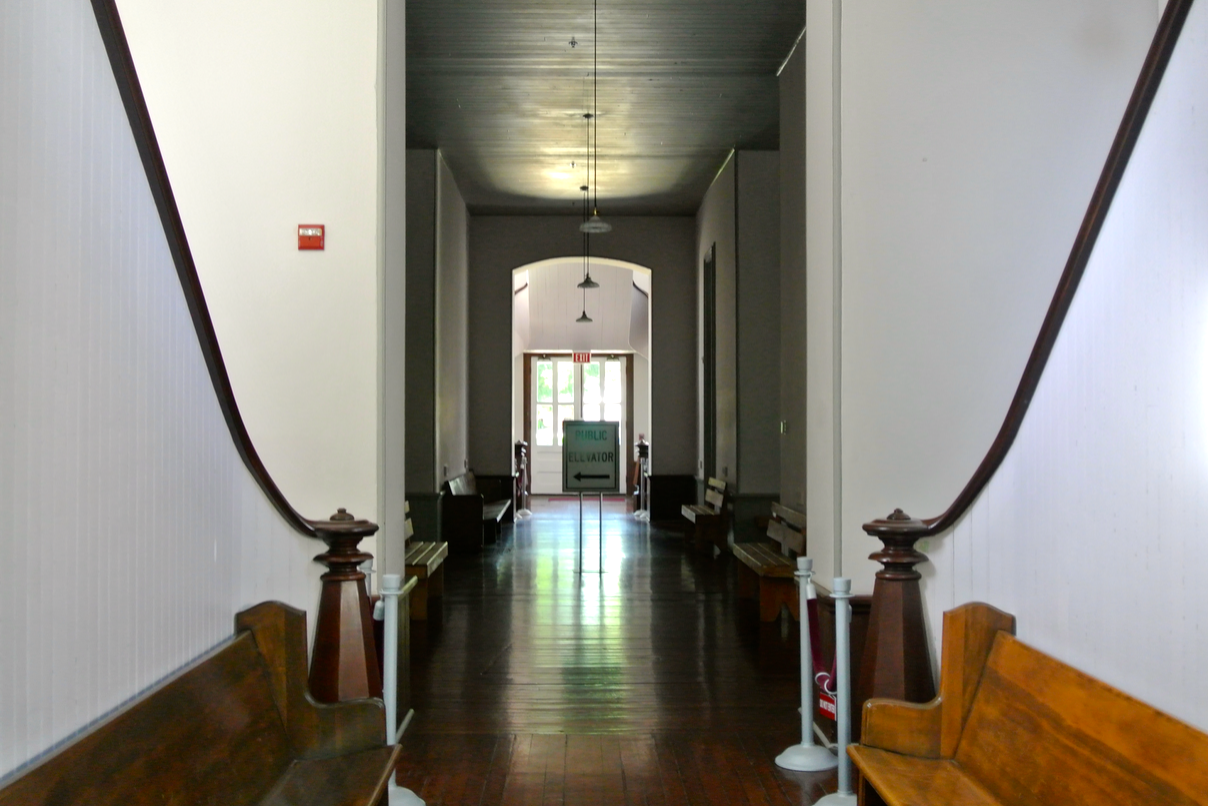 The interior, looking from east to west

The historic jail is a block to the west of the courthouse. 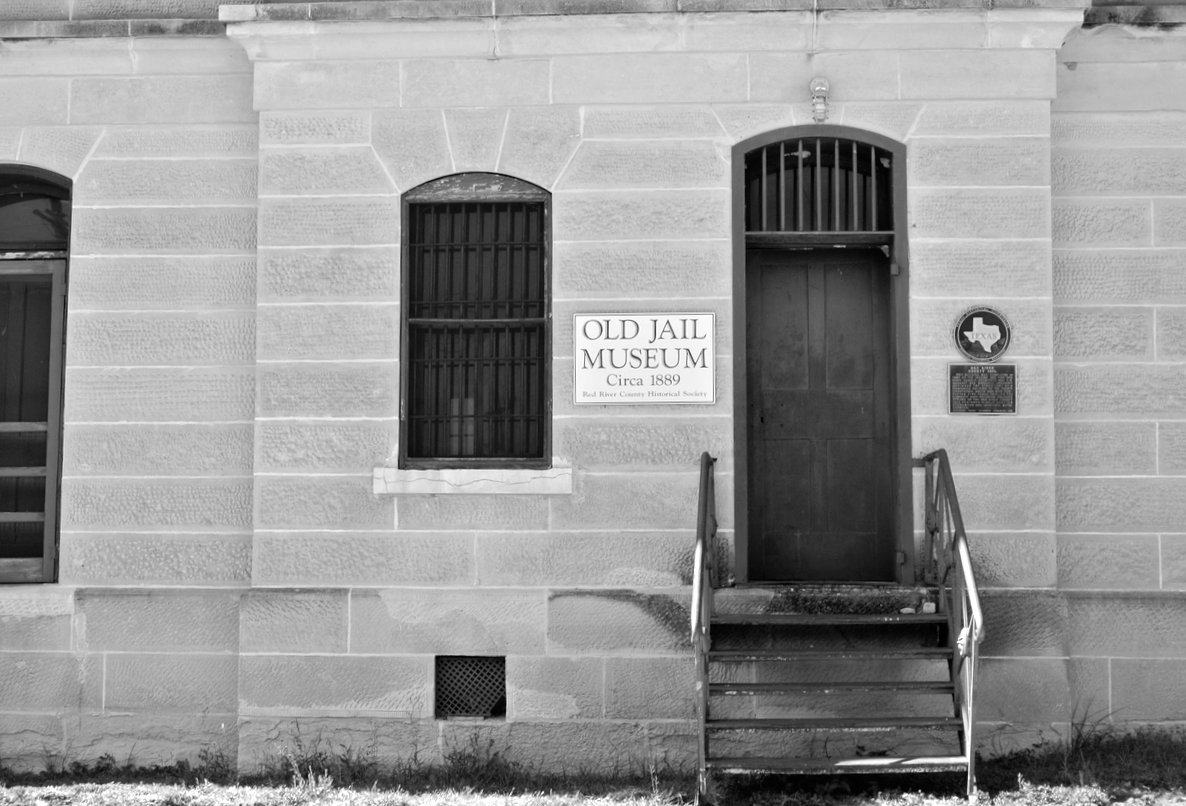 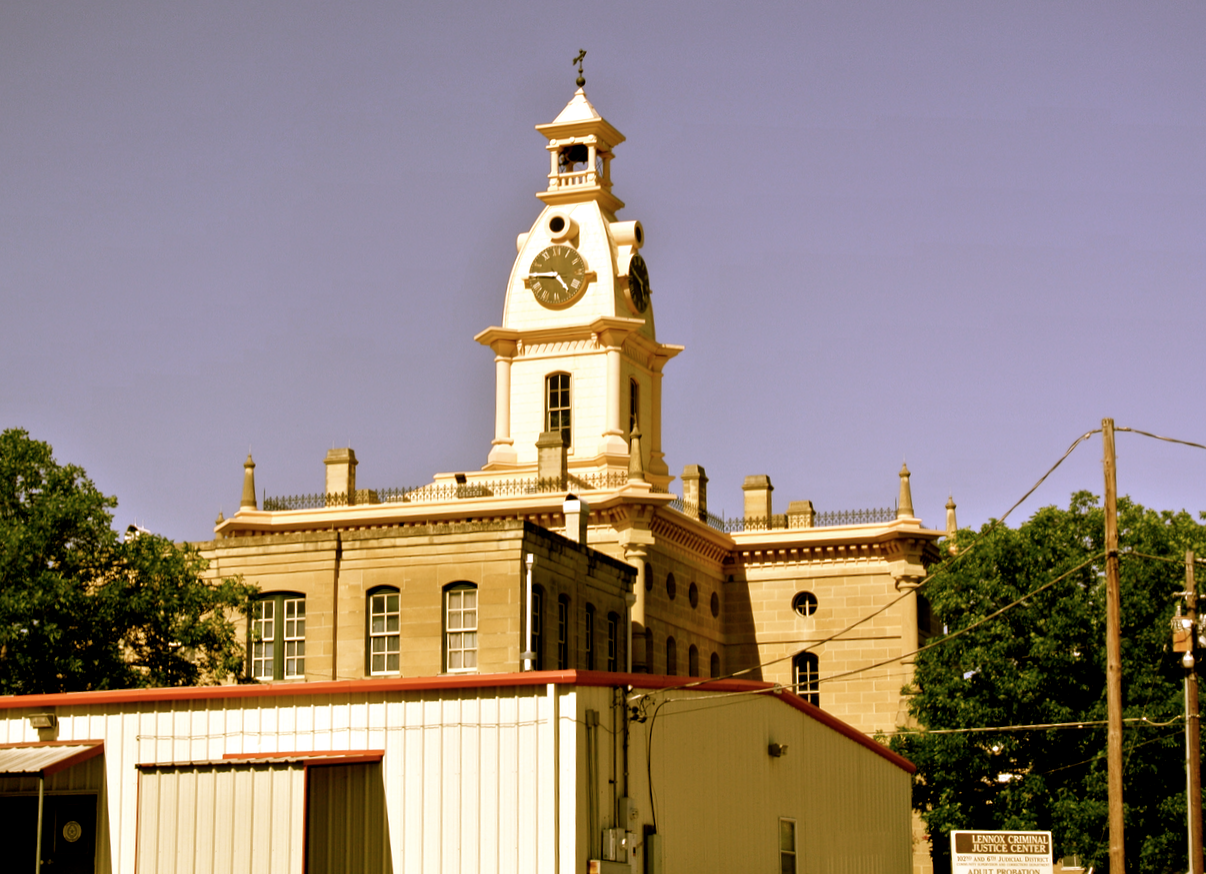 The courthouse, as seen from the jail

The Clarksville public square, three blocks south of the courthouse 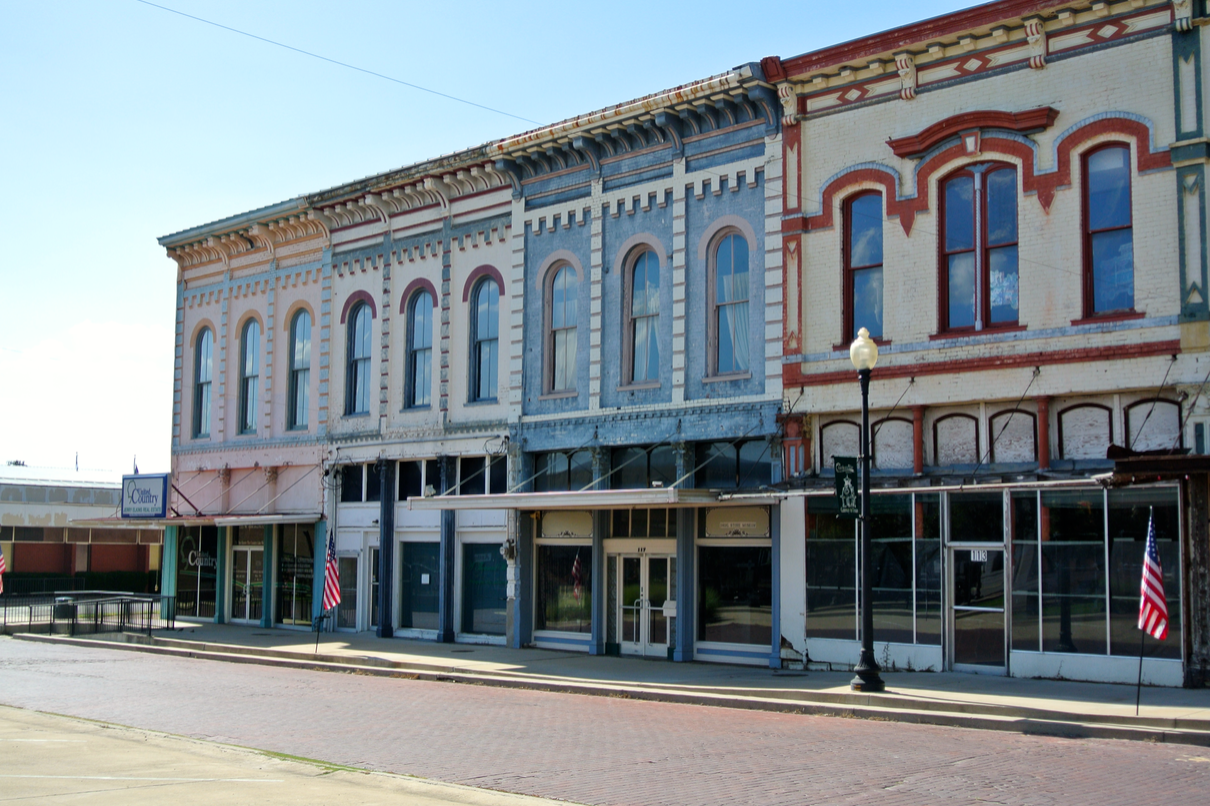 The “Bicycle House” on Main Street