“The county’s name is from the Trinity River, which forms its southeastern boundary. Trinity County covers 692 square miles of rolling to hilly terrain that extends diagonally from the Trinity River northeast to the Neches River. The area is drained by these rivers and by a number of creeks that drain into them; near the southern tip of the county the Trinity has been dammed to form Livingston Reservoir, which provides water and recreation for the area.”

“In 1837 the Congress of the Republic of Texas established Houston County, which included all of the area of present Trinity County. The first recorded permanent white settler was a Jesse James, who settled on Alabama Creek in 1844, near a large Indian settlement. In 1845 John Gallion moved into the settlement and purchased the Indians’ livestock and improvements. Though the subsequent fate of the area’s Indian population is unknown, they seem to have moved to the Indian Territory.”

“On February 11, 1850, the Texas legislature established Trinity County. Jesse James, Benjamin B. Ellis, Solomon Adams, James Marsh, Henry Ward, John Gallion, and M. Duke Hornsby were appointed [']to ascertain the centre of the county, to select two sites within five miles of the center suitable for site of the County Seat, [and] to hold an election to determine which would receive the most votes.[']”

“In 1854 Sumpter, a primitive village, was declared county seat, and a small courthouse and jail were built; that same year the county’s first post office was established there. By the late 1850s Trinity County was a thriving frontier area that profited from the steamboat traffic on the Trinity River. Though most of the county’s inhabitants supported themselves through hunting and subsistence agriculture, plantation agriculture was becoming increasingly important to the local economy.”

“The Trinity County area also became a haven for Confederate deserters and criminals during the [Civil] war, and public order broke down. Some of the county’s most prominent men organized a vigilante committee; J. F. Moore, the county sheriff, led its operations. Though the vigilantes resorted to summary justice and lynched a number of men, the county was still in turmoil when the war ended. In 1866 three companies of Illinois infantry were stationed in Sumpter as occupation troops for Reconstruction, but the county’s society continued to be turbulent and disorganized in the years just after the Civil War.”

“A new town, Pennington, was established in the northwestern part of the county in 1866, but by 1870 the county’s total population had declined to 4,140. The county’s social and political geography shifted after 1872, when the Great Northern Railroad extended its tracks into the small village of Trinity, located in the southwestern part of the county. Almost immediately people began to move out of Sumpter to Trinity and Pennington, sometimes taking their homes and other buildings with them. In May 1873, a few months after the Sumpter courthouse burned with most of the county records, the town of Trinity became the seat of government for the county. The next year, after another election, Pennington became the county seat; its courthouse burned in 1876.”

“Lumbering in the county intensified during the early 1900s. Production was prodigious; one mill alone, owned by Thompson-Tucker Lumber, turned out 100,000 boardfeet of lumber daily in 1909. By that time, however, the county’s old forests were almost played out. The town of Josserand died in 1909, when its mill closed that year, and Willard folded up in 1911 for the same reason; Saron died in 1919 and Westville in 1921. By 1928 only the lumber operations in Groveton and Trinity were still operating, and the companies that owned these mills were reaching into Tyler and Houston counties for their logs. Only ugly stumps and brush covered much of Trinity County, and the once-thriving sites of Willard, Josserand, Saron, and Westville were only “waste places covered with brambles.” The Groveton mill closed at midnight on December 31, 1930, blowing its steam whistle for two hours to signal the end of an era in the county’s history.”

“Despite the agricultural expansion, the closing of the mills and the onset of the Great Depression had severely undermined the local economy. By the early 1930s a number of people had already moved out of Groveton, the county seat, and the town had lost some of its finest buildings to fires. The main railroads in the area stopped running, and the county had almost no paved roads aside from State Highway 94, which was completed between Groveton and Trinity in 1929. New Deal projects sponsored by the federal government did much to revive the area and to prepare it for the future, however.”

“Trinity County’s population declined significantly during the 1940s and 1950s as farms mechanized and consolidated; by 1950 there were only 975 farms in the county, and young people left to look for new opportunities elsewhere. Thanks to reforestation efforts, however, the lumber industry eventually revived, and by the 1960s there were two sawmills operating in the county. By the 1980s the area’s timber production exceeded the yields of the timber boom of the early 1900s, and timber sales provided most of the county’s revenue.”

“Groveton (population, 985) is the county’s seat of government and Trinity (2,545) its largest town. Other communities include Apple Springs (350), Sebastapol (300), Woodlake (180), Pennington (67), and Centralia (190). The town of Trinity holds a spring festival each May and a community fair in September.” 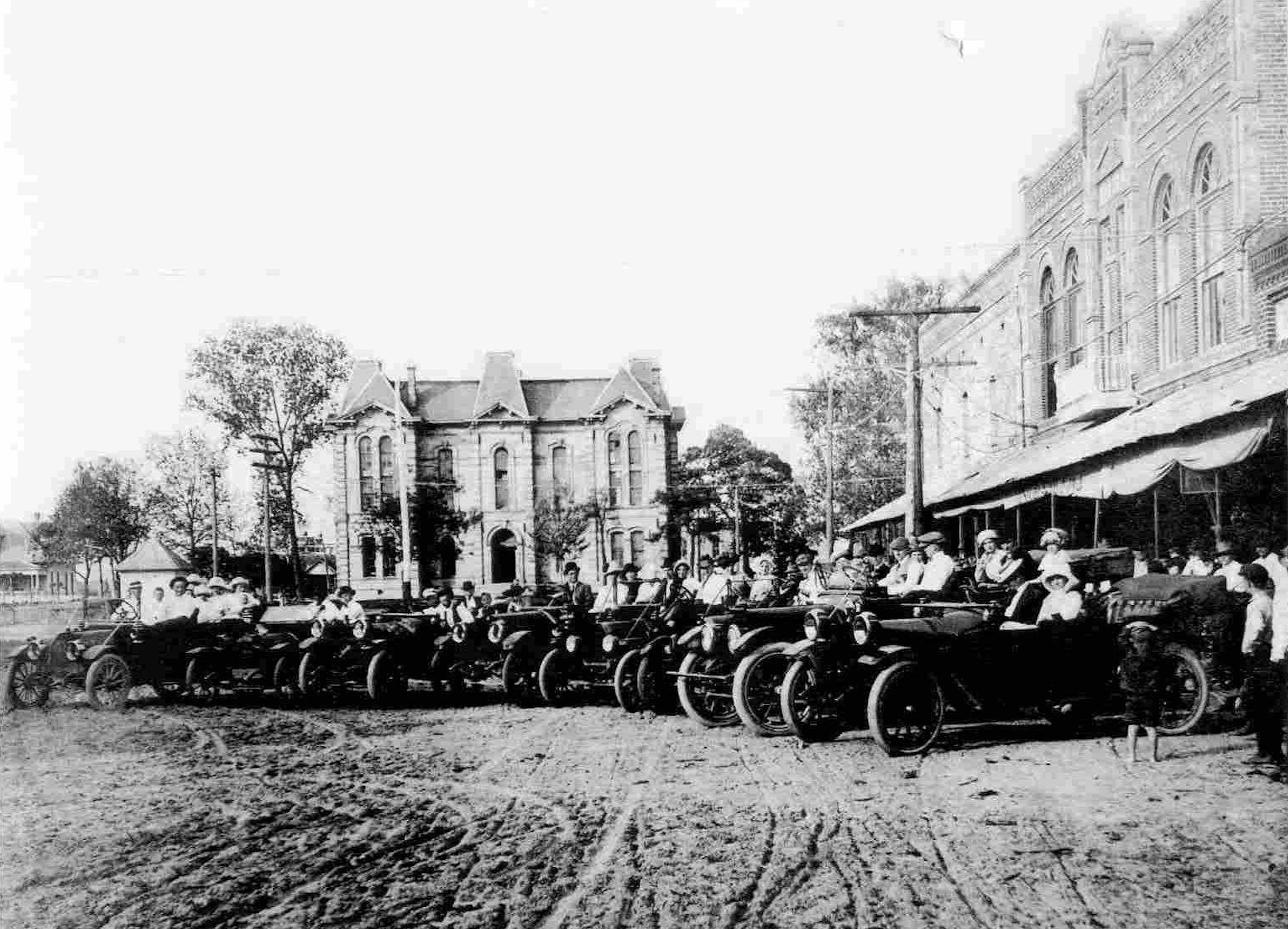 There is little information on this Second Empire, Eugene Heiner design. We know that Darling & Myers were the contractors and that it burned in 1910. 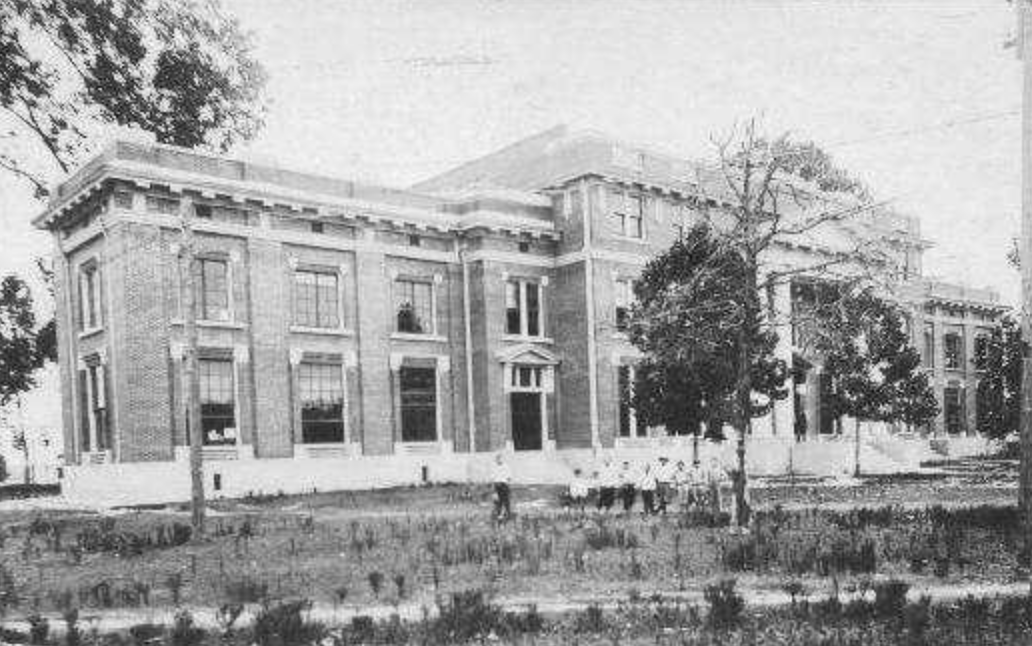 This is a Classical Revival design created by the C.H. Page and Brothers firm. Its conceptual design is almost identical to that of the original courthouse annex in Livingston, and is to date, the narrowest courthouse I’ve seen. 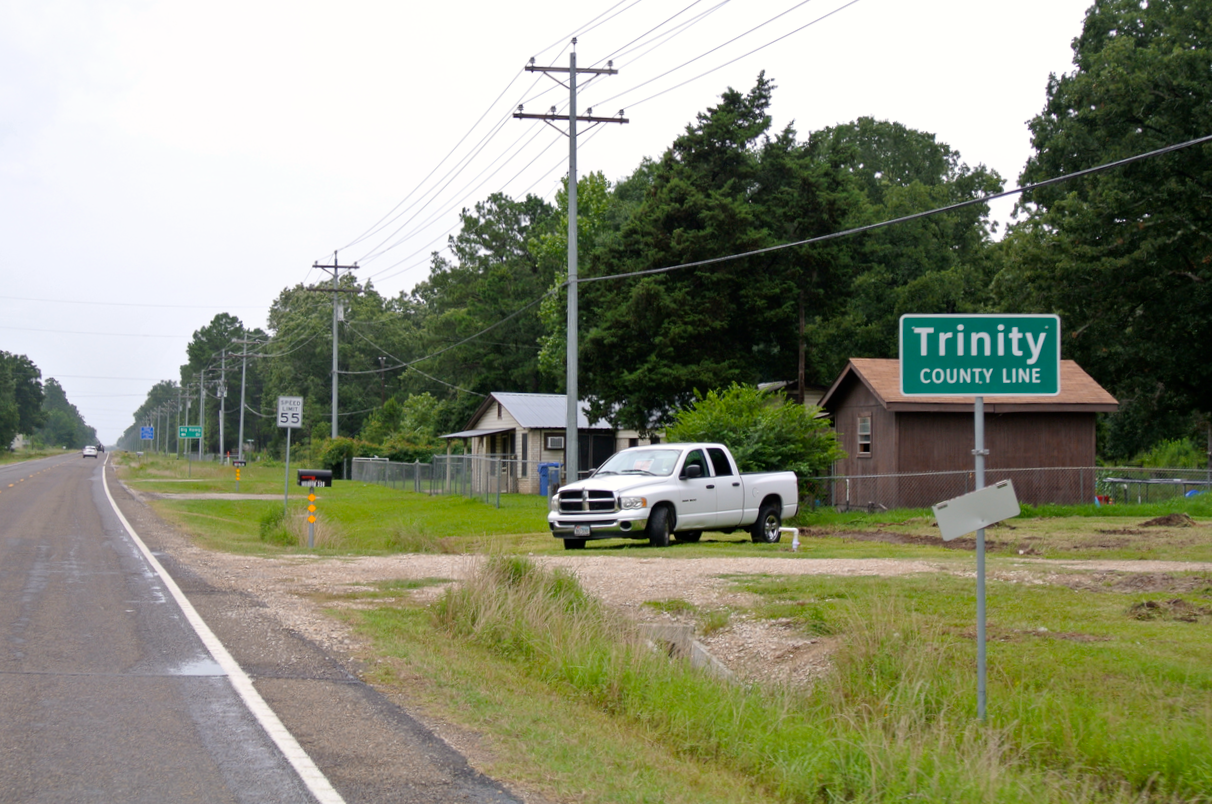 The impressive Trinity County Courthouse looks upon the intersection of Main and 1st Streets. 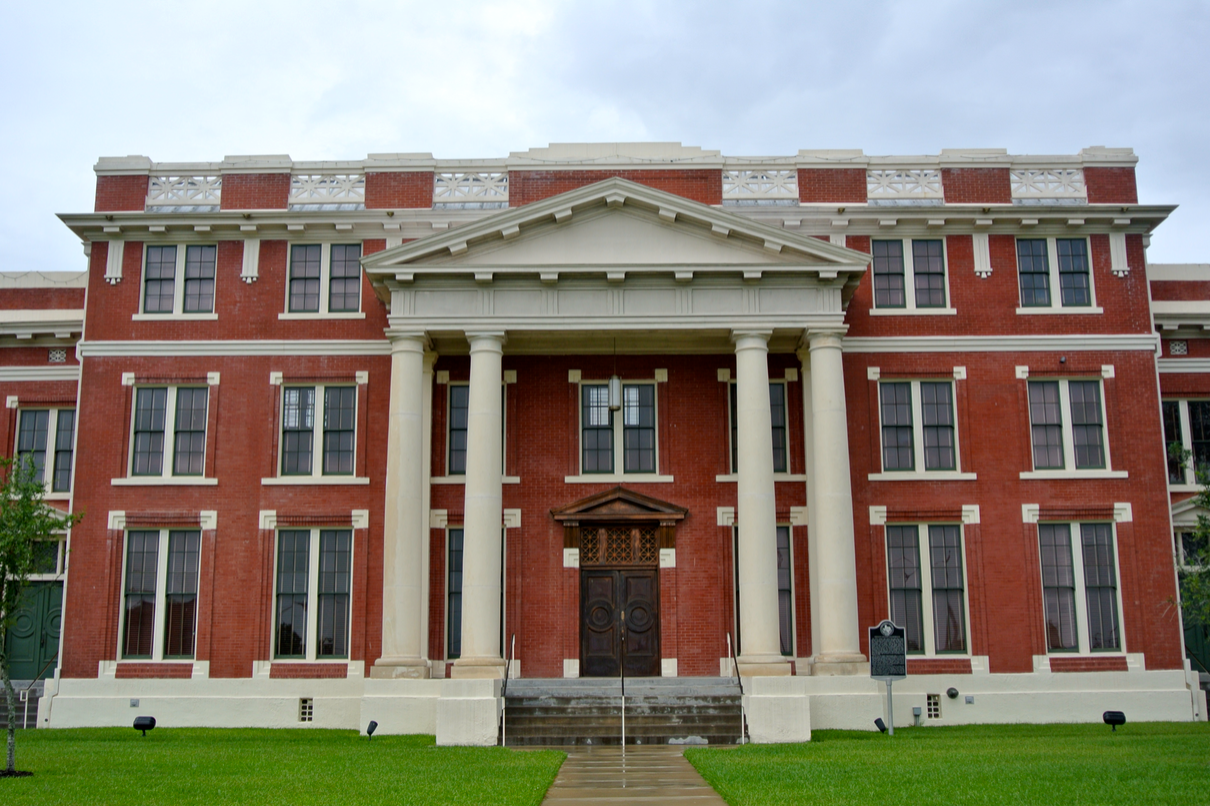 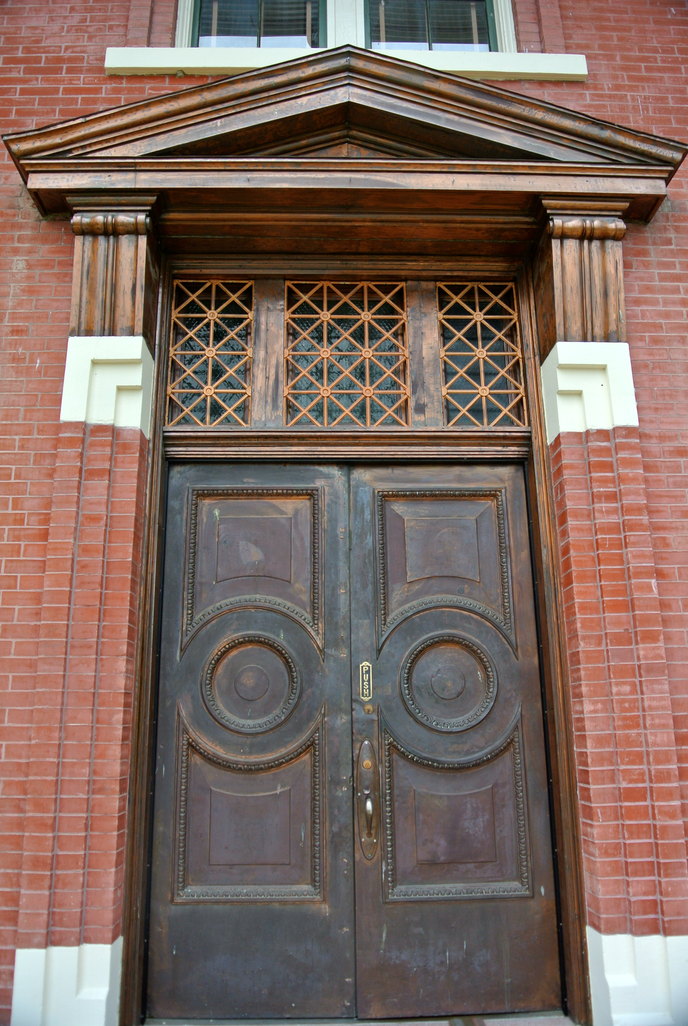 These are the front doors… 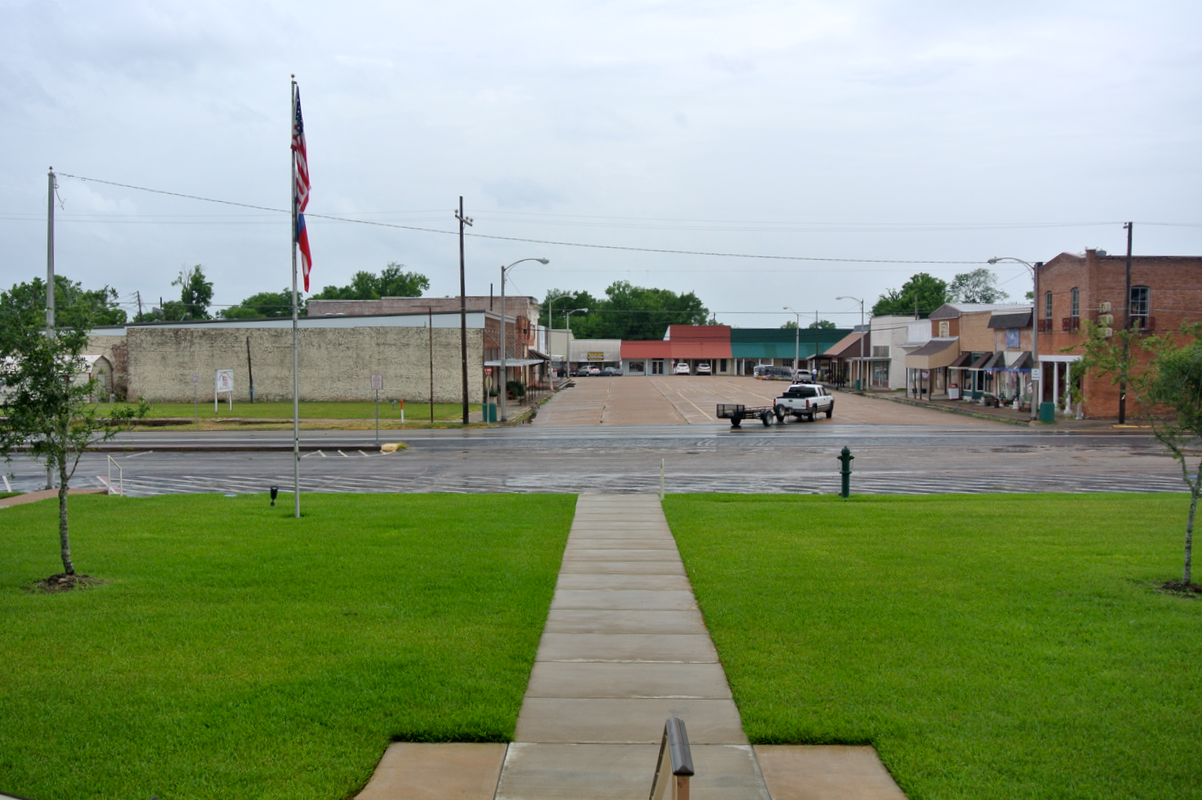 …and this is their view. The courthouse is not centered on the intersection of Main and 1st. 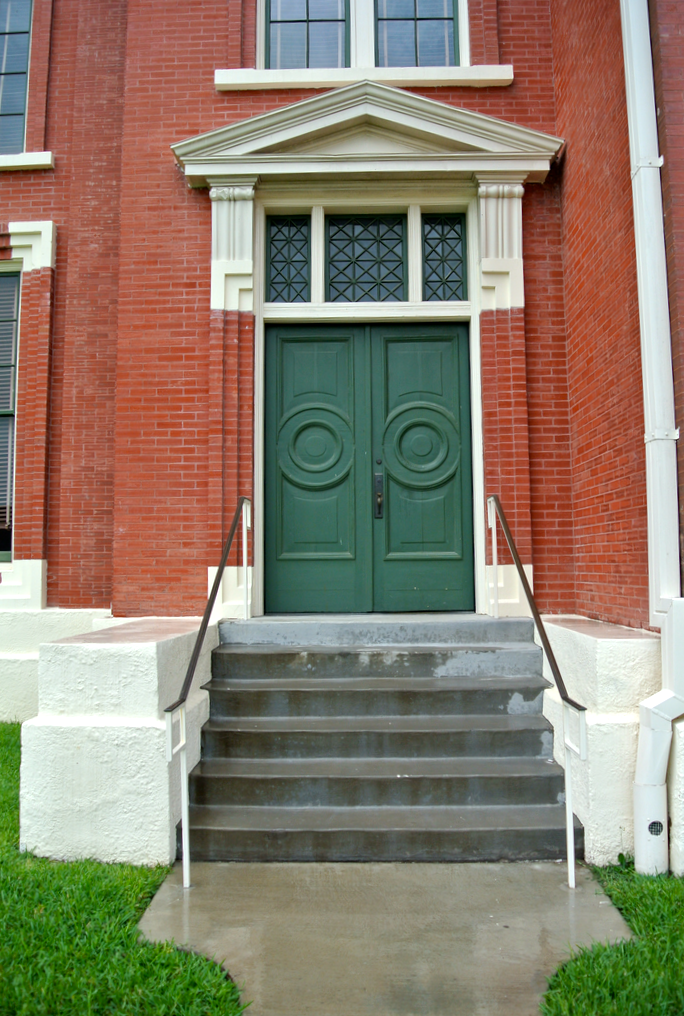 Two green doors flank either side of the courthouse’s main façade. 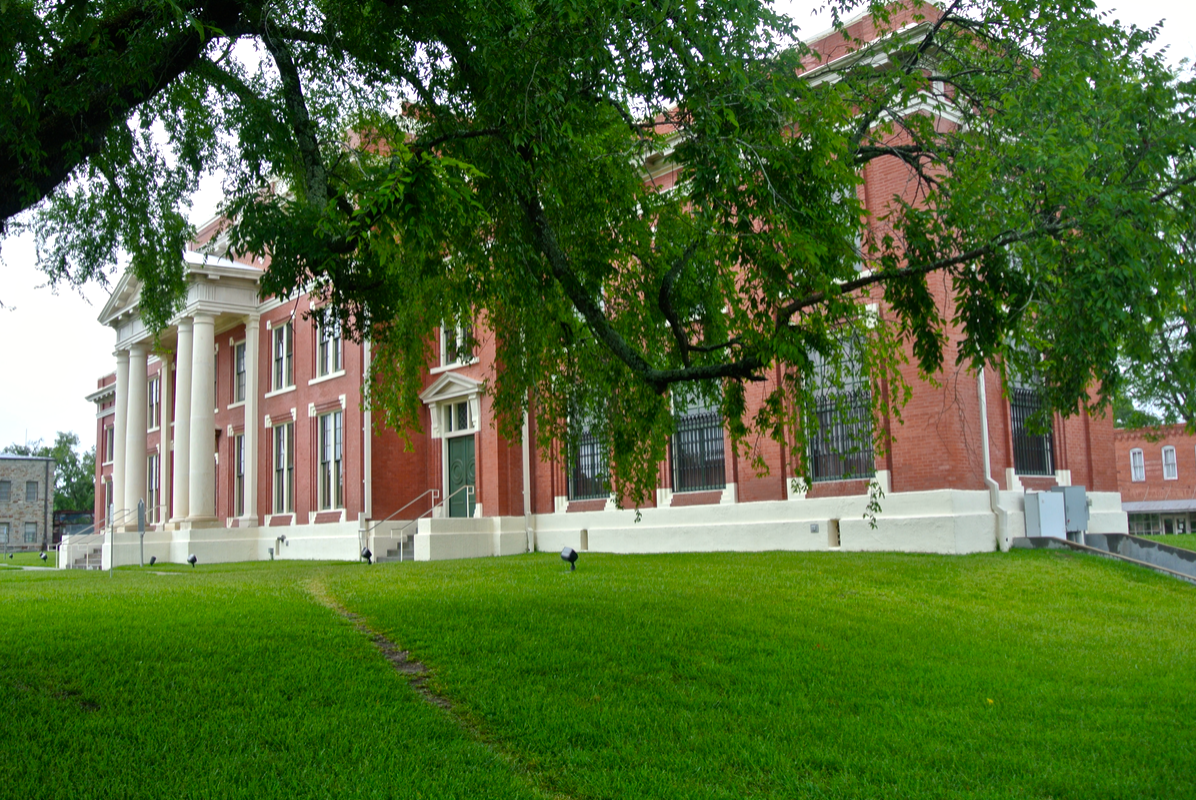 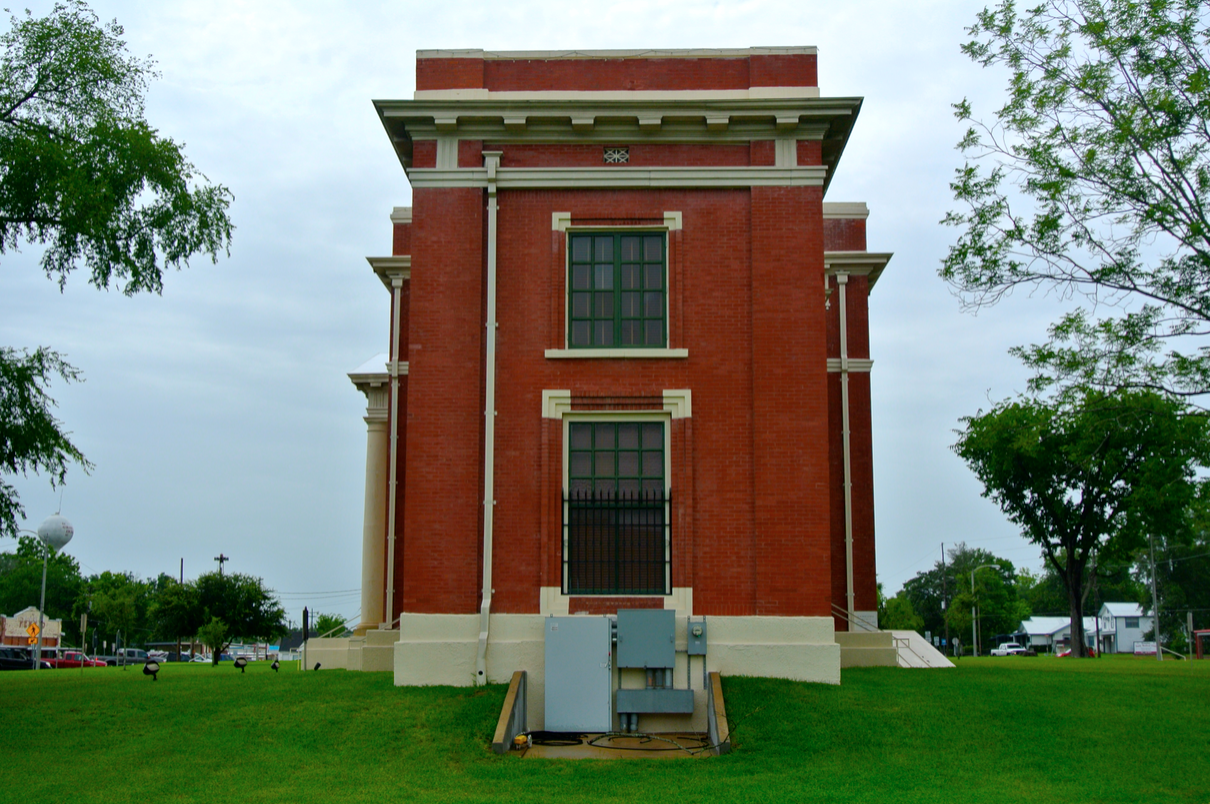 I’ll reiterate: this is the narrowest courthouse I’ve seen. I imagine only one office fits at the end of each floor. This is the southeast façade. 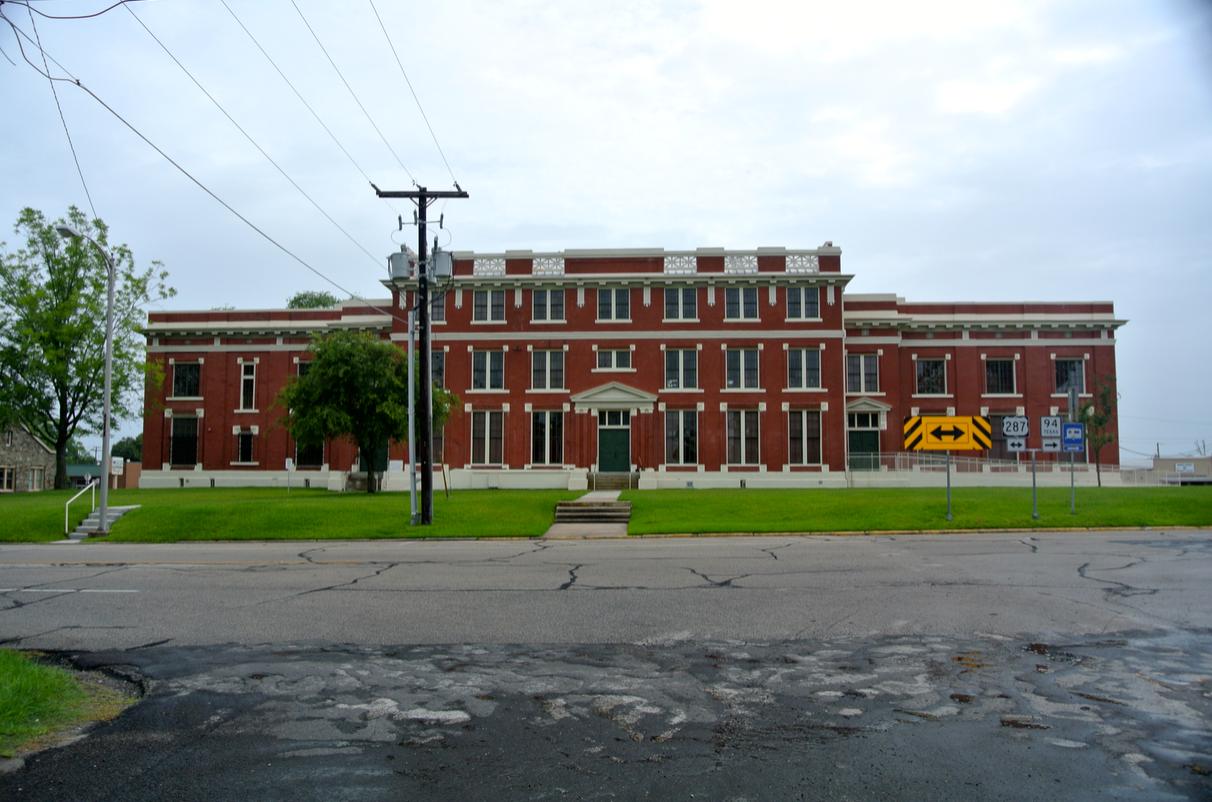 This is the full northeast façade. It too is not centered at a highway intersection. 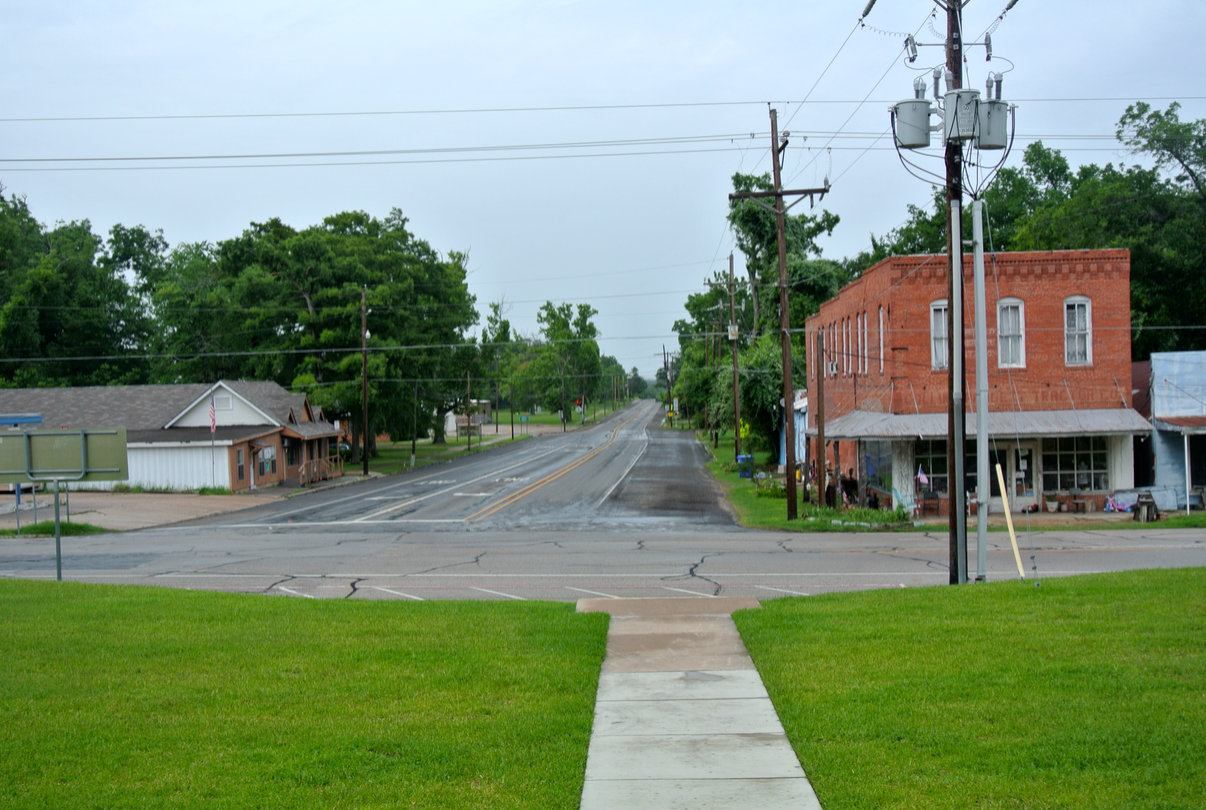 The view of 2nd & Main from this side of the courthouse confirms we are definitely in East Texas. 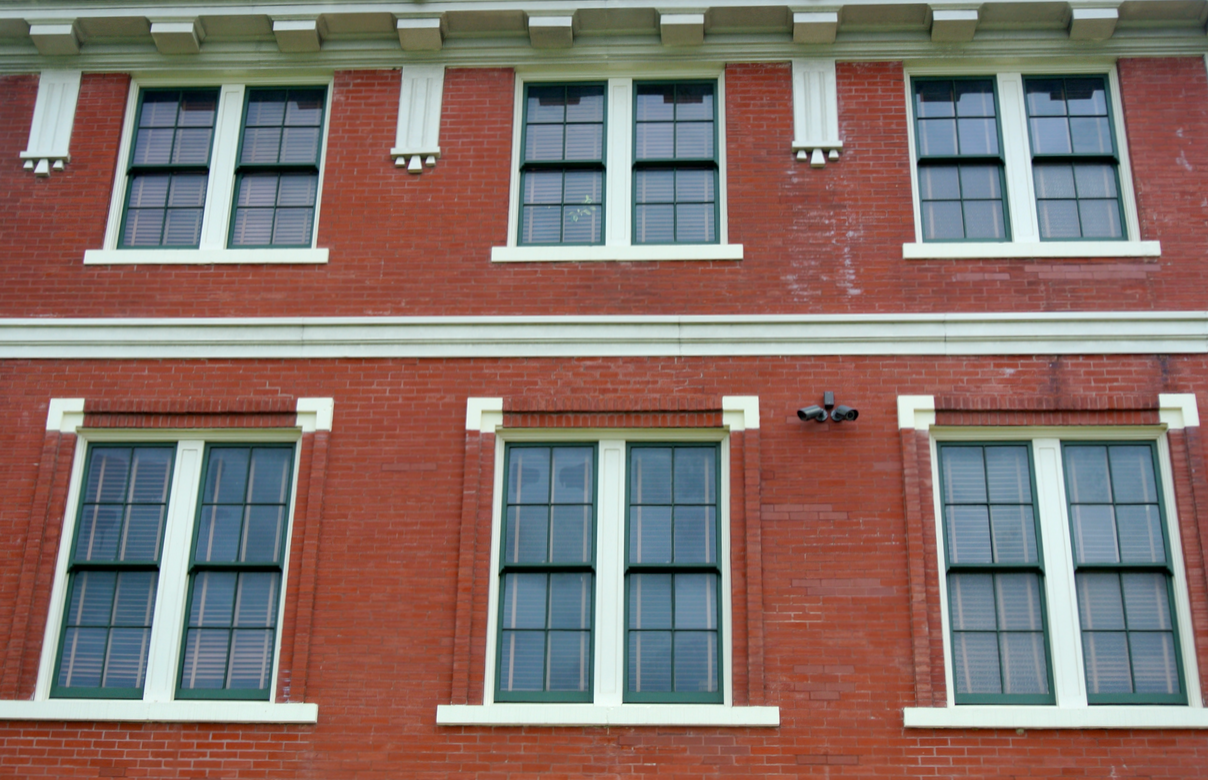 The cornerstone on the northeast side of the building doesn’t look to be original. But, I may be wrong.

The handicap ramp is installed at the northern corner. 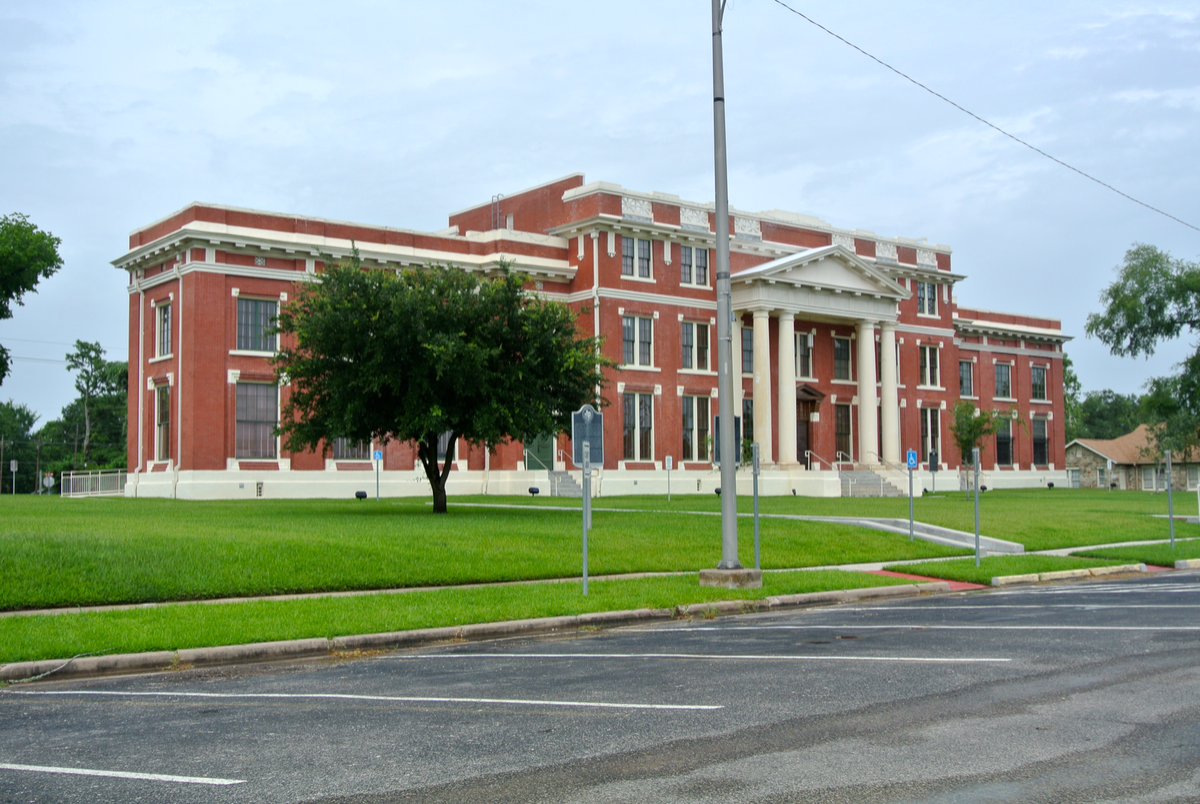 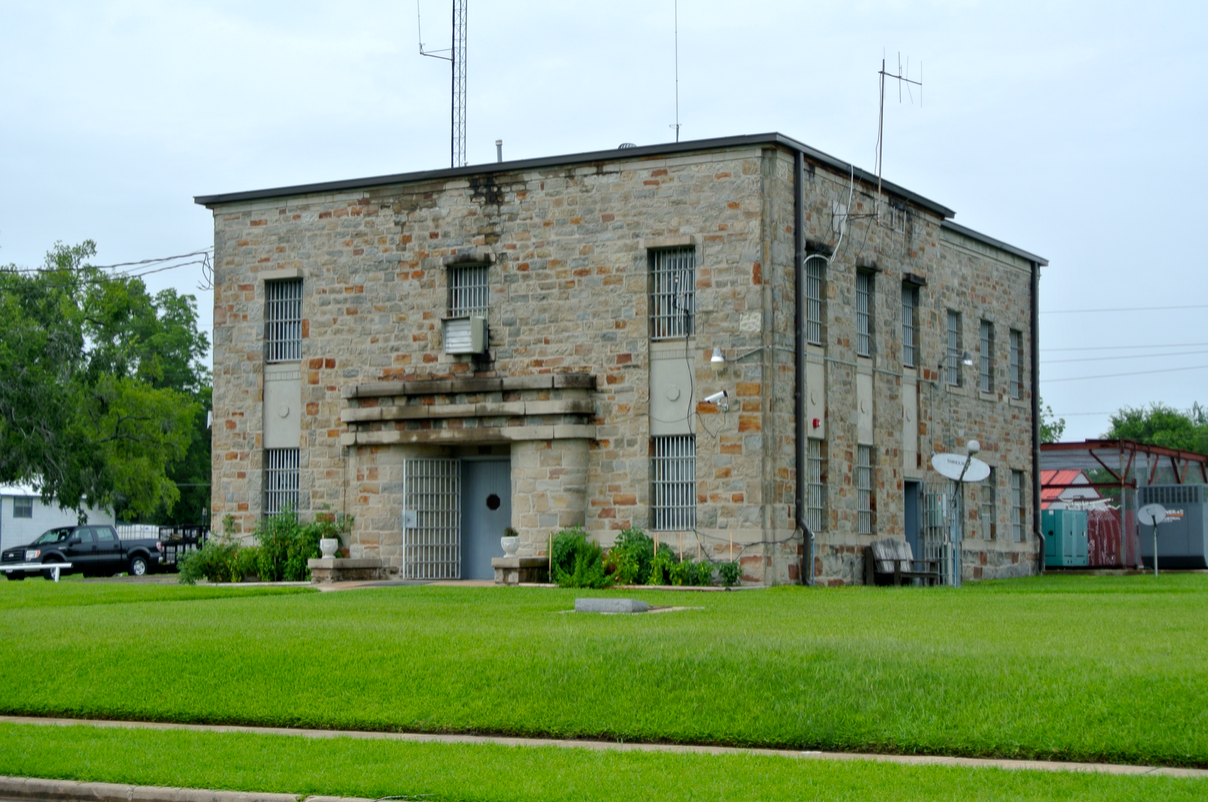 The Trinity County Jail is located just to the west of the courthouse. 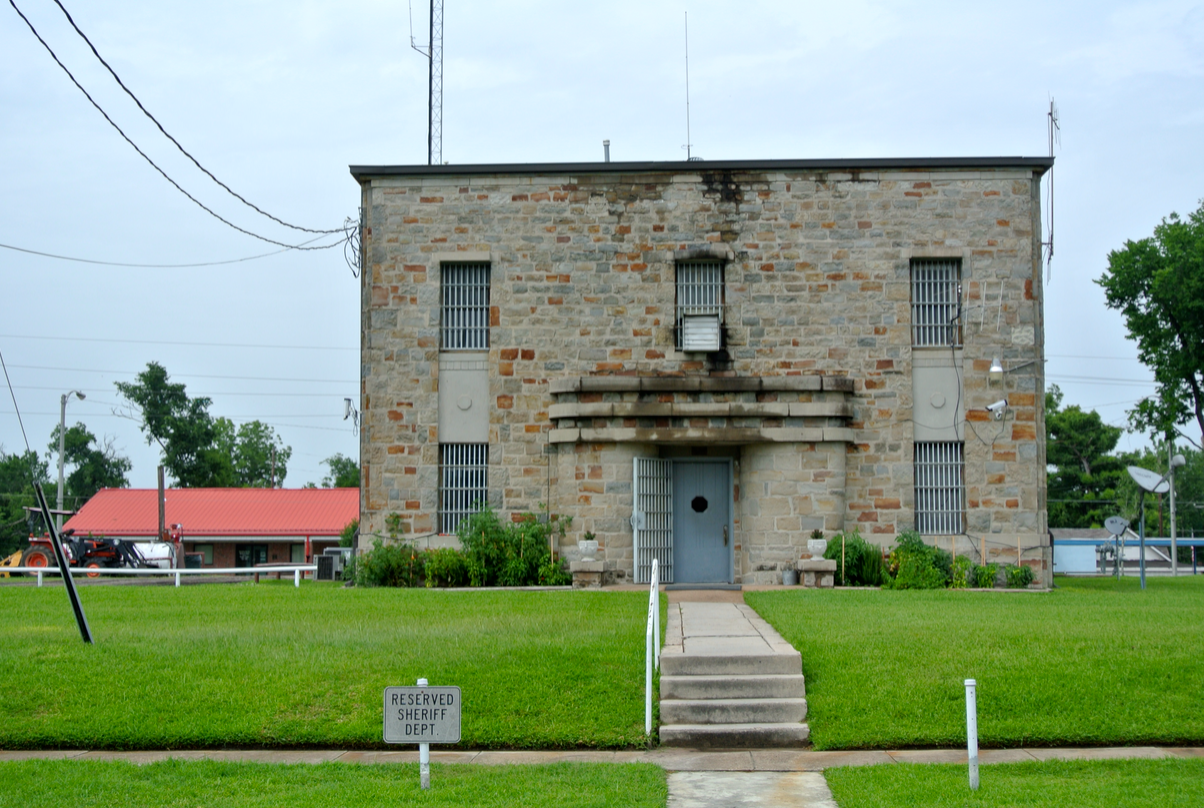 It was constructed in 1938 and is still in use. 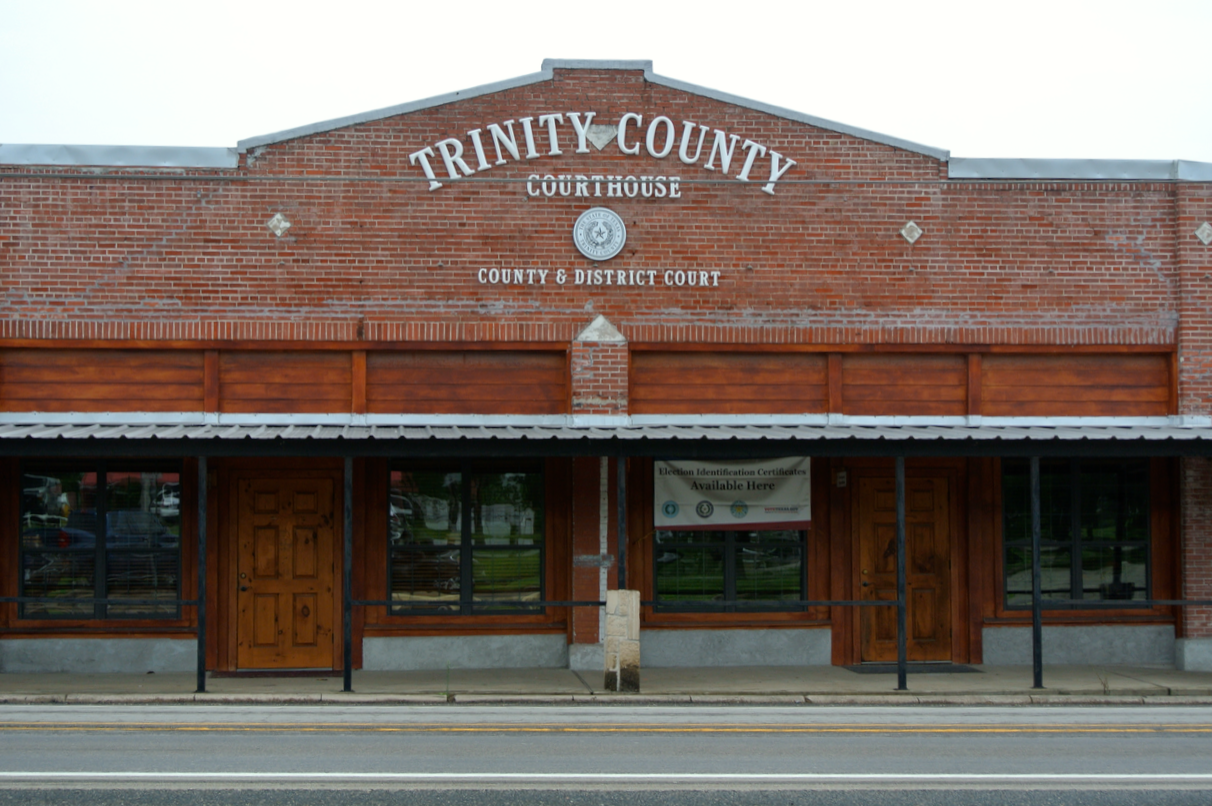 Across the street from the jail is the courthouse annex. If there was ever a courthouse that needed more room for offices, it was this one.