“San Jacinto County comprises 628 square miles of the East Texas Timberlands and is heavily wooded with longleaf and loblolly pine, cedar, oak, walnut, hickory, gum, ash, and pecan. Sixty percent of the county is in the Sam Houston National Forest. Gently rolling hills characterize the area, and the soils are reddish with a loamy surface and mostly clayey subsoils that are high in iron.”

“The first post office in the area was established in 1847 in Coonskin, then in Polk County. The name was changed to Coldspring in 1850. The land on which Coldspring is located was originally granted by the Mexican government to Robert Rankin. The Texas legislature established San Jacinto County with Coldspring as the county seat on August 13, 1870, out of parts of Liberty, Montgomery, Polk, and Walker counties. The county was named in honor of the battle of San Jacinto, which ended the Texas Revolution.”

“On March 12, 1877, the Commissioners’ Court met to consider plans for building a courthouse and agreed to pay Thomas and Werner, builder and architects of Fort Worth, $8,000 to build the structure. A brick jail was also built for $1,500 by Thomas Ireland. The first census taken after the county was organized shows 6,186 residents by 1880. The county’s first weekly newspaper began publication in 1897 in Coldspring under the name the San Jacinto Times.” 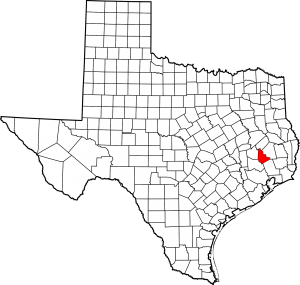 “Transportation was slow to develop in the area. Steamboats occasionally ascended the Trinity River for several hundred miles in the 1850s, and early settlers frequently made short trips downriver to reach other parts of the county. They depended on these steamboats and the cargo they brought from ports on the Gulf of Mexico. Residents were able to ship part of their cotton crop on the return voyages of the steamboats. In 1871 a $500 bond was posted to establish a ferry across the Trinity River at Swartwout. About the same time, a public ferry across Mussels Shoals Creek was established.”

“Partly due to the lack of available churches, camp meetings were popular in the early days. They were usually held in the summer and attracted people from miles around. Local residents began building an enormous shed, called a “brush arbor,” and preparing the campground months before the meeting was to take place. These meetings declined in number in the early 1900s as a result of improved transportation which made camping unnecessary.”

“Growth slowed significantly in the early twentieth century. By 1910 the population had leveled off at 9,542, probably due to mill developments in adjacent counties and to poor transportation facilities within the county. There were over 1,600 farms in the county in 1920. That year the black population reached a high of 5,487. That number may have declined later as a result of operations of the Ku Klux Klan, which experienced a revival after World War I. A chapter of the organization was organized at Coldspring, and several meetings were held outside of town. Meetings were discontinued before World War II.”

“After the original county courthouse burned down in 1915, the town of Coldspring moved to a more elevated site, and a new $15,000 courthouse was built. Other businesses followed the county seat to its new site.”

“The lumber industry has been instrumental in the economic development of San Jacinto County. Most of the land lies within the East Texas pine timber area. The rainfall, soil, and long growing season have all contributed to the county’s timber growth. Several large lumber mills were established along the Houston East and West Texas Railway. The Gibbs brothers made their first purchases of lands in San Jacinto County between 1869 and 1874 and began operation of the Palmetto Lumber Company in 1874. Between 1900 and 1939 they acquired another 32,000 acres of timberland. The Foster Lumber Company also owned thousands of acres along the East San Jacinto River. In 1935 the company sold 30,000 acres to the federal government; this land became part of Sam Houston National Forest when it was established that year.”

“Oil was first discovered in San Jacinto County in 1940. At that time Coldspring had five general stores, three filling stations, two garages, two cafes, two drugstores, a meat market, a pressing shop, a barbershop, and a food store. In 1950 the county had 1,100 farms and the population had fallen to 6,153. Until then African Americans had outnumbered whites. In 1970, however, there were almost three whites for every two blacks. Between 1970 and 1980 the county population jumped from 6,702 to 11,434.”

“Primary crops include Indian corn, hay, sweet potatoes, peaches, and pecans. Livestock have mostly played a subsistence role in the economic life of the county. In 1990 livestock and livestock production earned 50 percent of agricultural receipts, primarily from cattle, milk, and hogs. Agribusiness employs most of the people in the county. Retail trade and service industries provided most of the other jobs. At least 70 percent of the population was employed outside the county, many in Houston or at the Texas State Penitentiary at Huntsville.”

“Recreation areas include Lake Livingston State Recreation Area and Wolf Creek Park, and hunting is plentiful in the county. The Texas Forest Trail is a scenic drive through the farming, ranching, and oilfield areas of the East Texas Pineywoods. Raven Hill, the plantation home of Sam Houston built in 1844, is a local historic site. Pioneer Days are held each April in Coldspring, and the County Fair is held every September. The population of San Jacinto County in 2014 was 27,099; about 75.4 percent were Anglo, 10.5 percent were African American, and 12 percent were Hispanic. Most residents lived in rural areas. Shepherd was the largest town (population, 2,444). Other towns included Coldspring (922), Pointblank (733), and Oakhurst (245).”

I was the guest of Coldspring and San Jacinto County on June 22, 2014.

I’ve found no photograph of this courthouse. All I know is that it burned in 1915. It’s because it burned that Coldspring town officials were prompted to move the town site to a higher location. 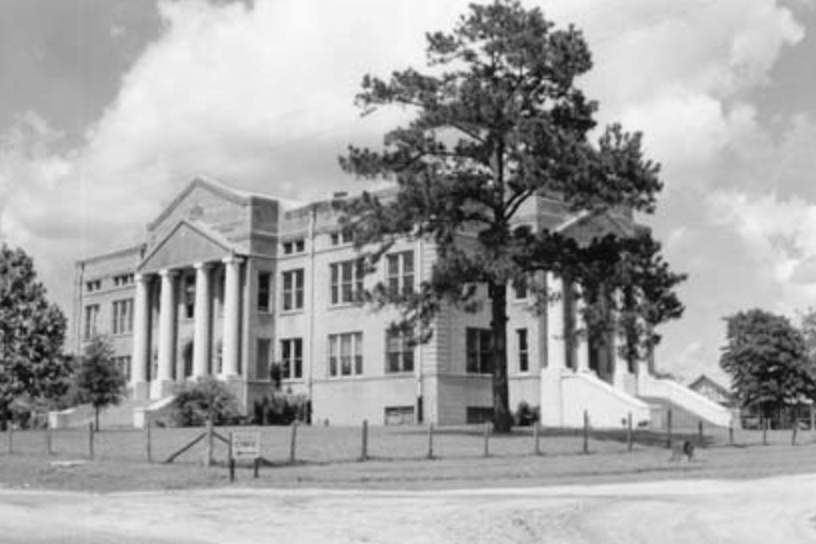 After the town site of Coldspring moved, the architectural firm Lane and Dowdy were brought in to design the current courthouse. It was completed in 1917 by the contracting firm Price and Williamson.

This Classical Revival building was remodeled in 1950 and again in 1976 for heating, ventilation, and air conditioning installations. Also in 1976, the courtroom ceiling was dropped, providing more space for county offices. 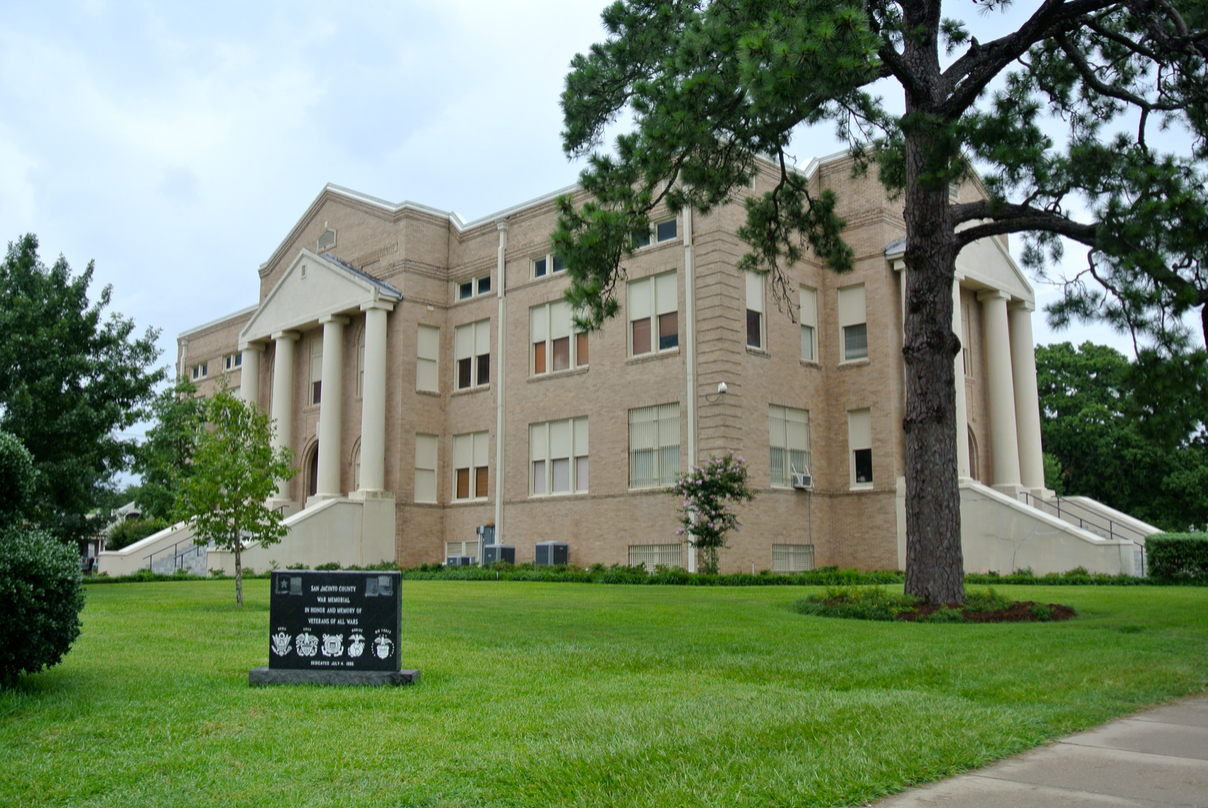 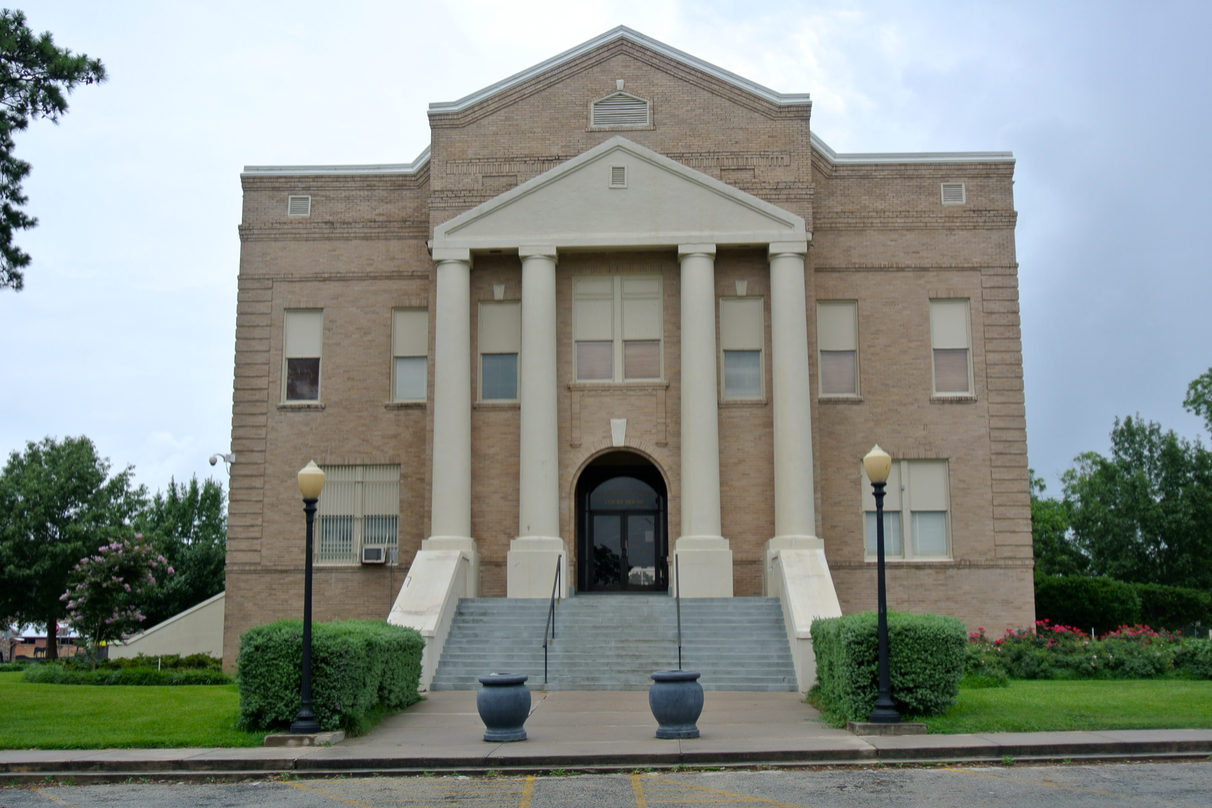 The southern façade, on Cedar Avenue 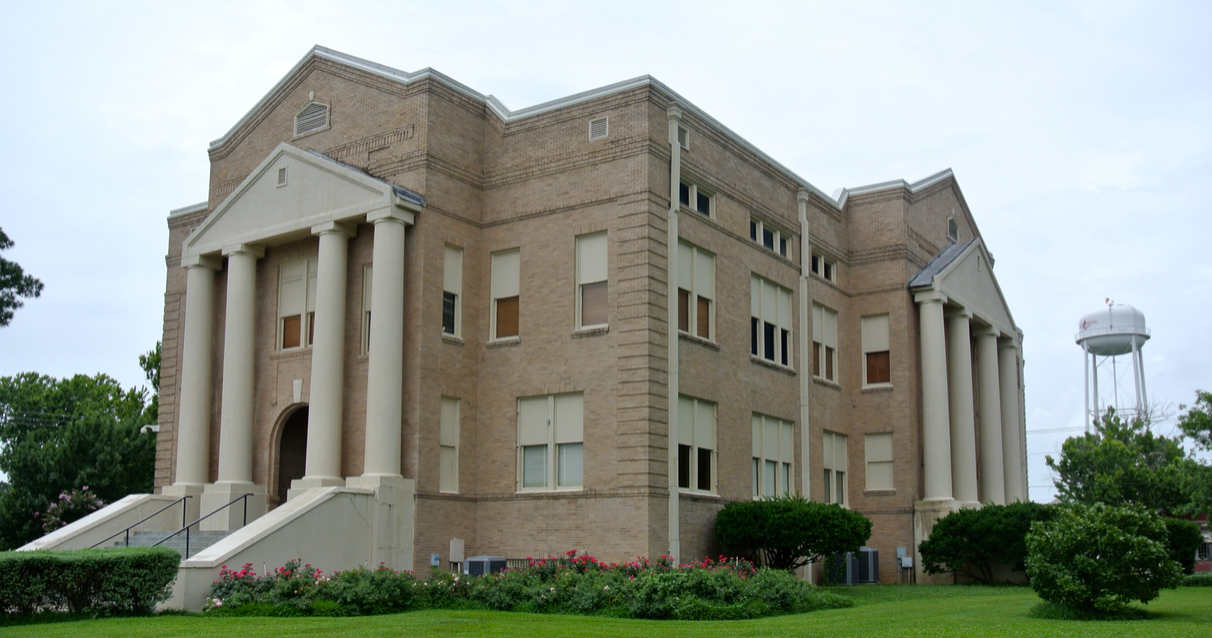 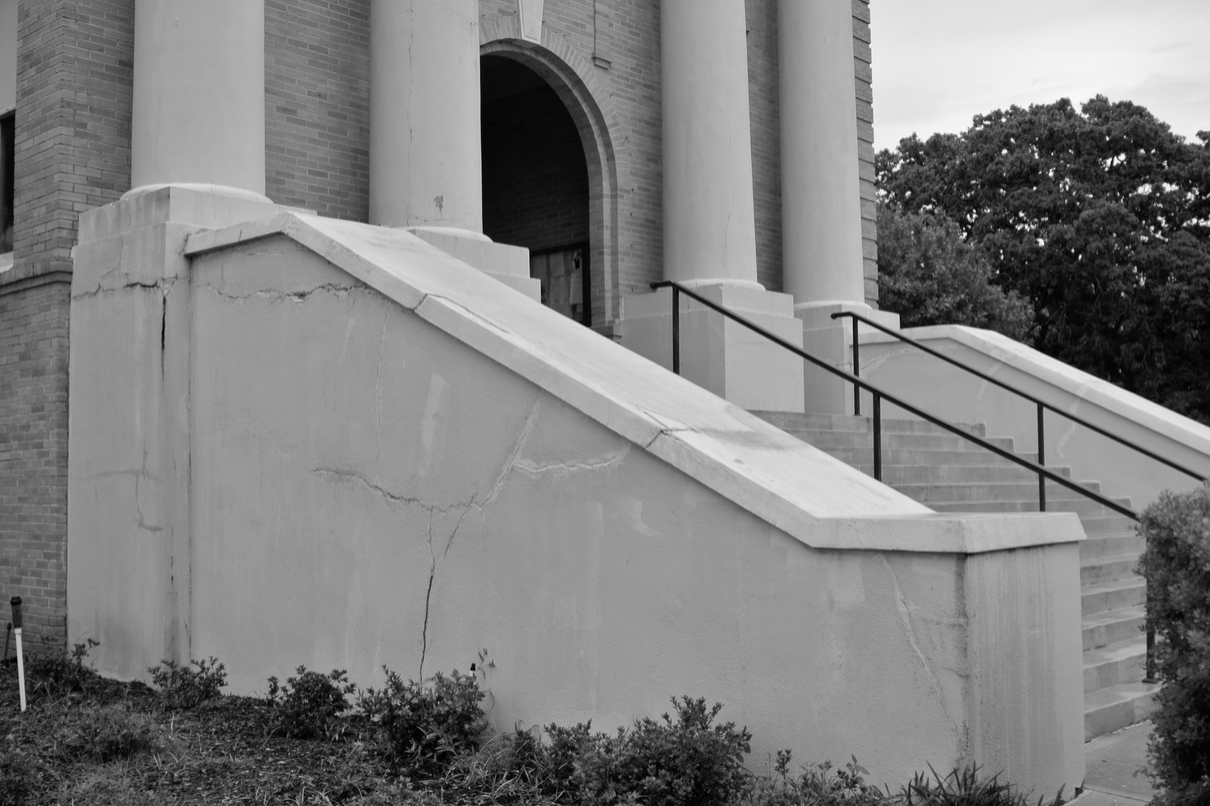 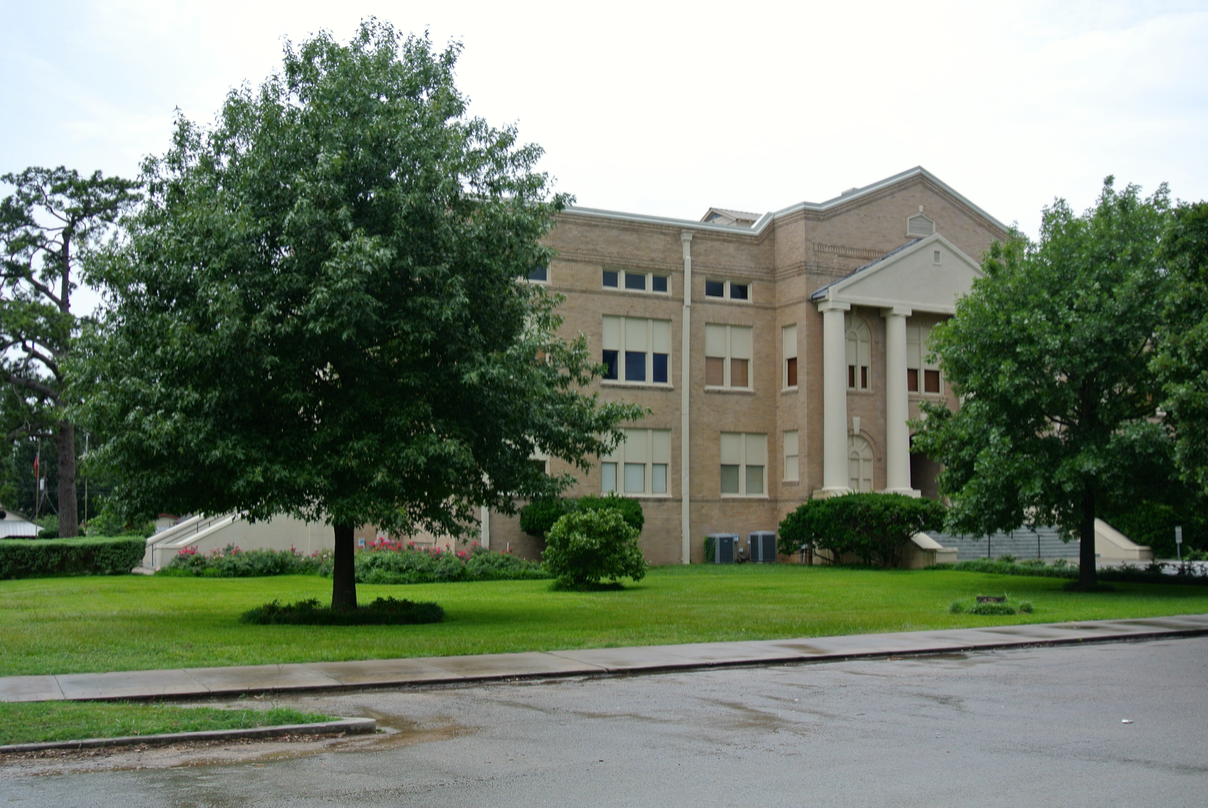 The eastern façade, on Butler Street 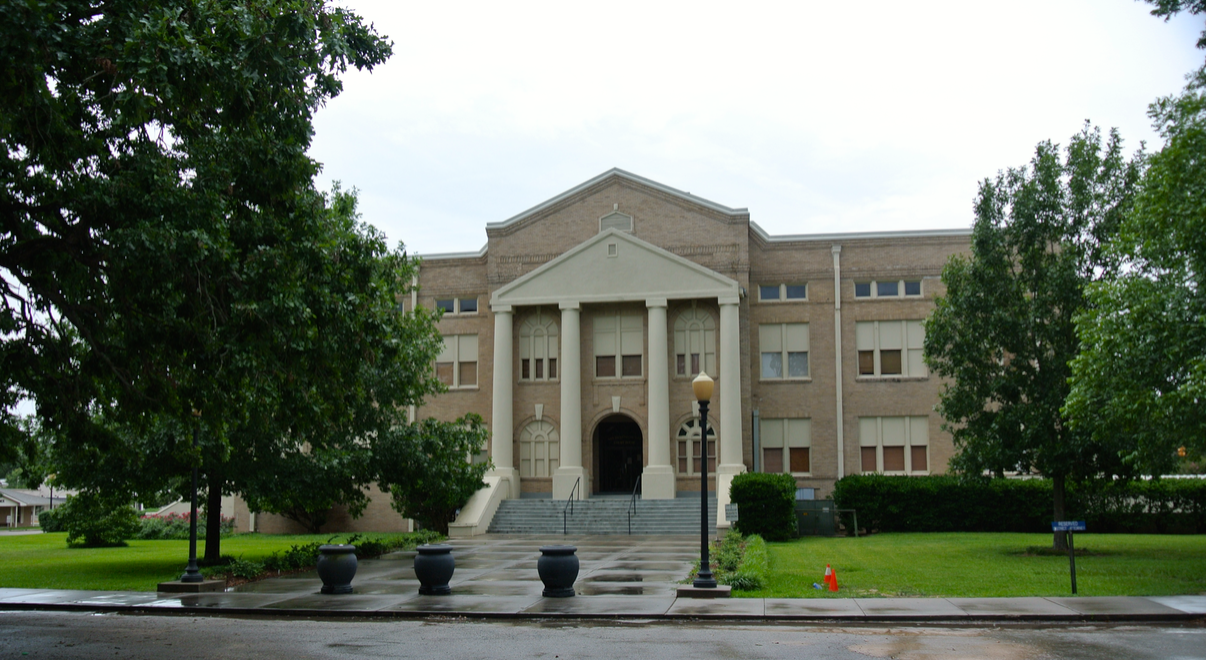 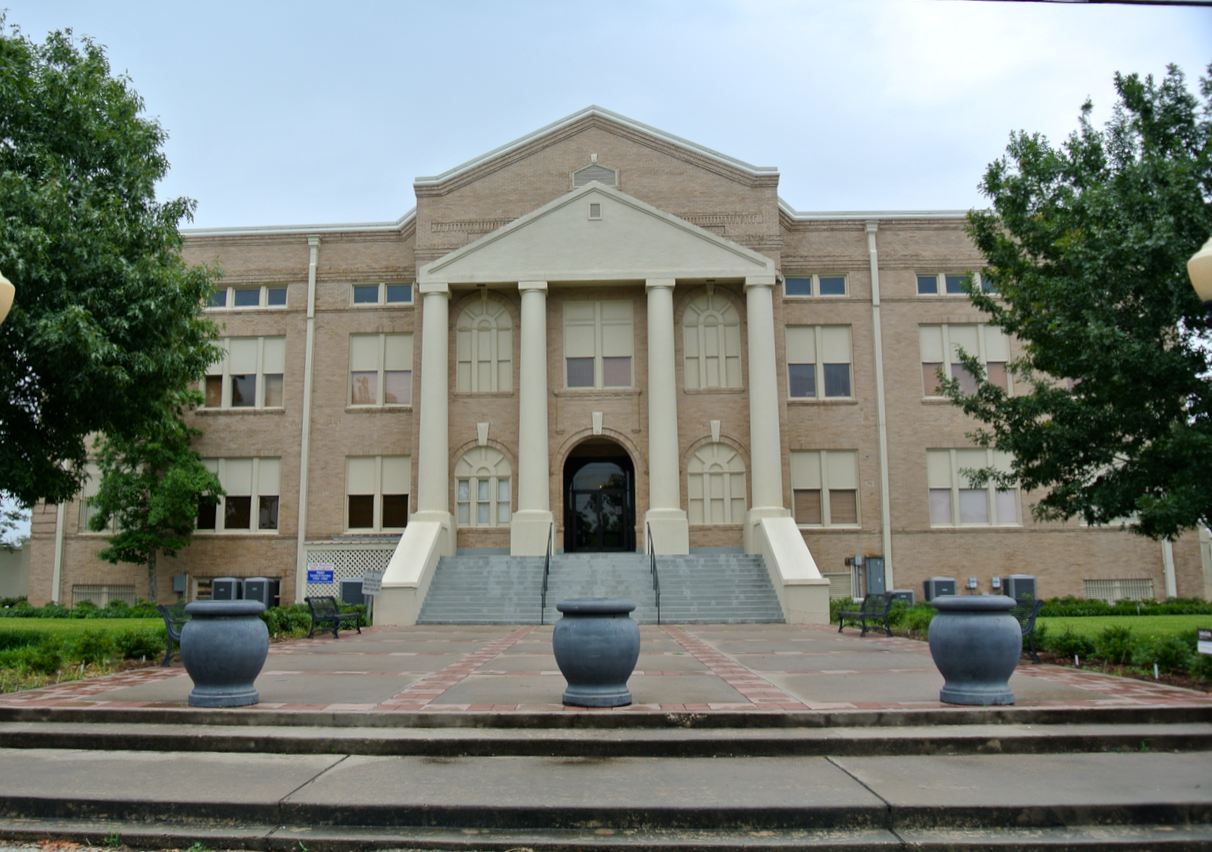 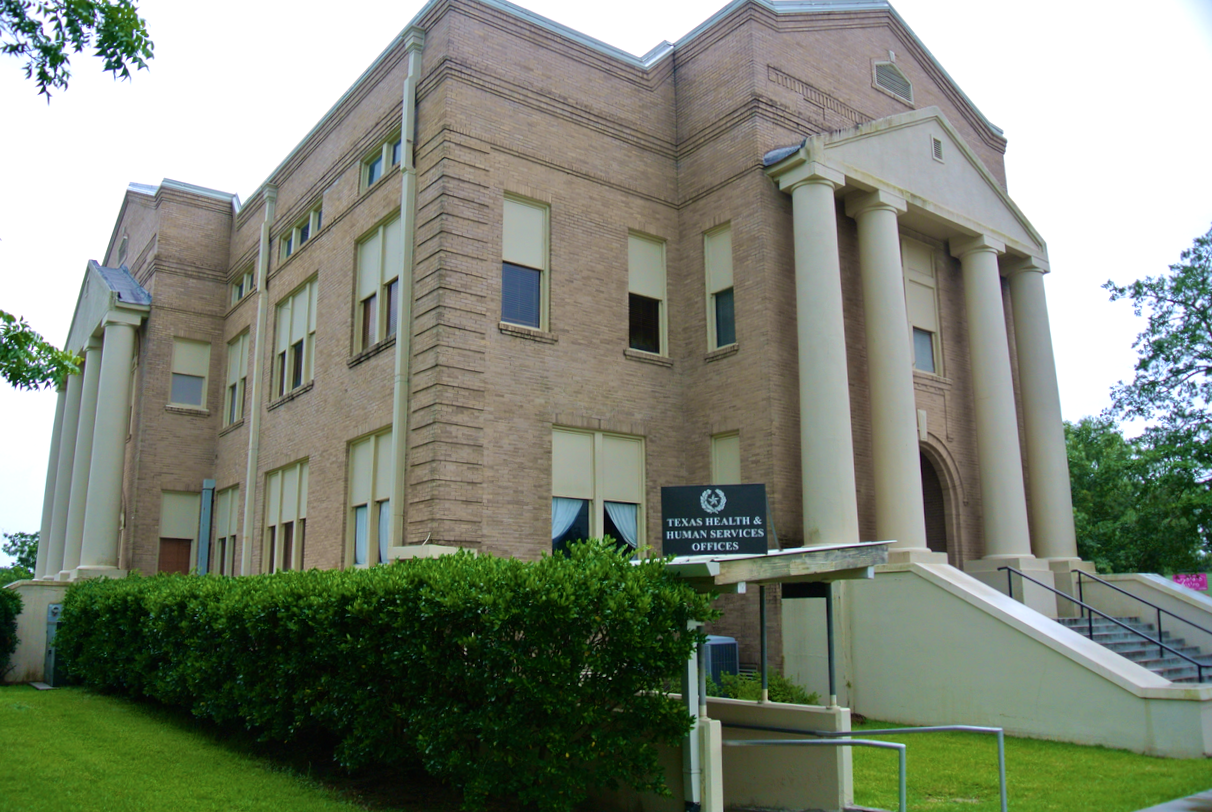 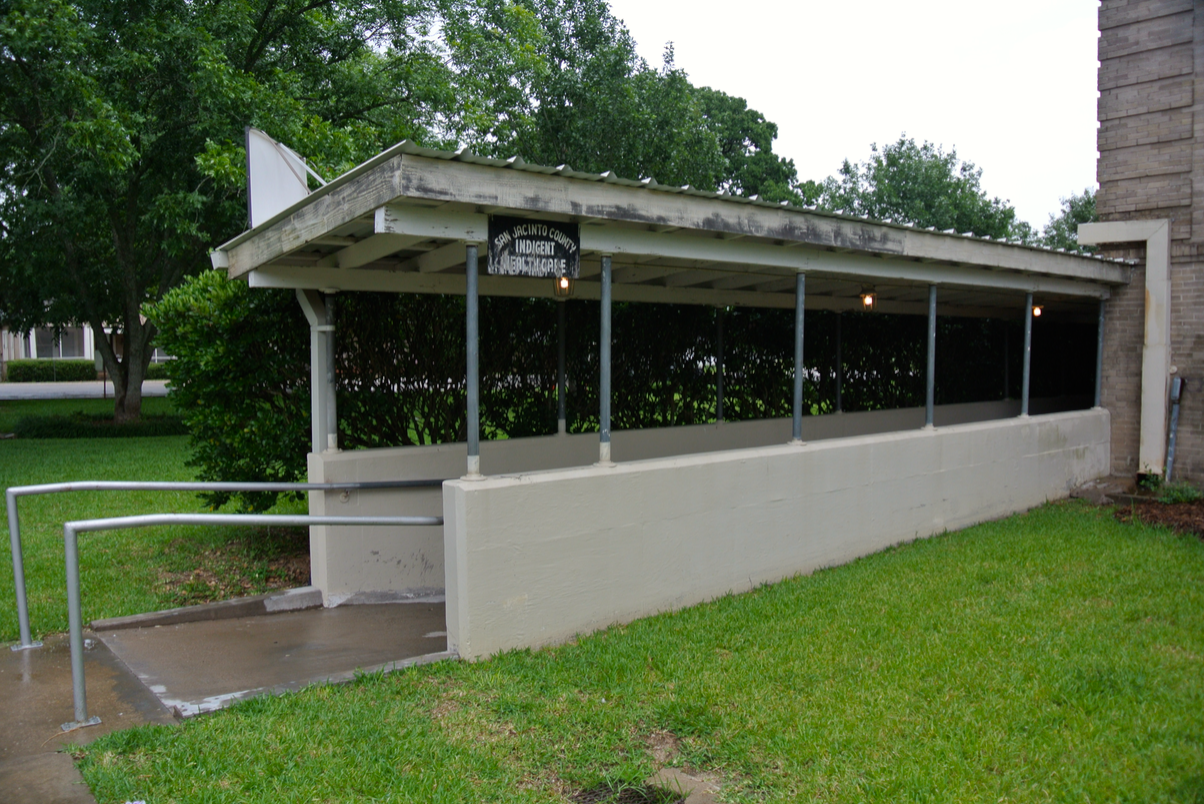 The Texas Department of Health and Human Services operates from within the courthouse. 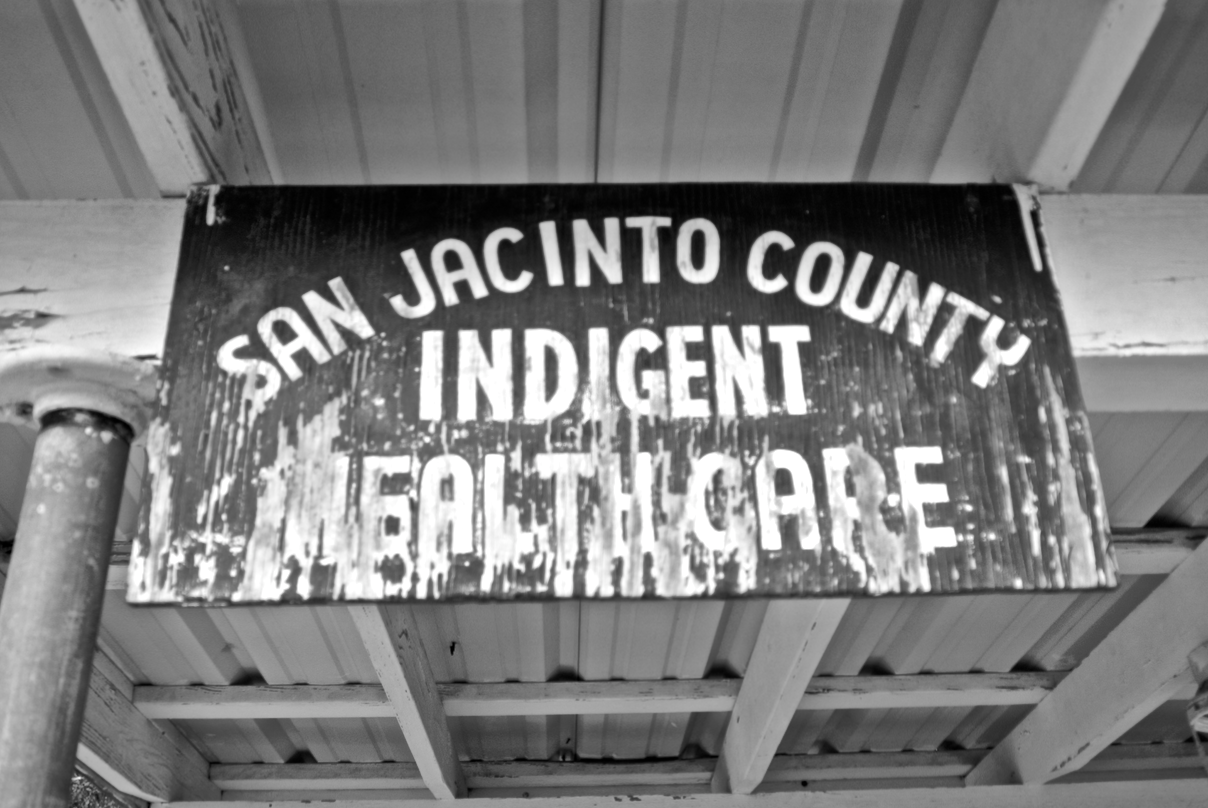 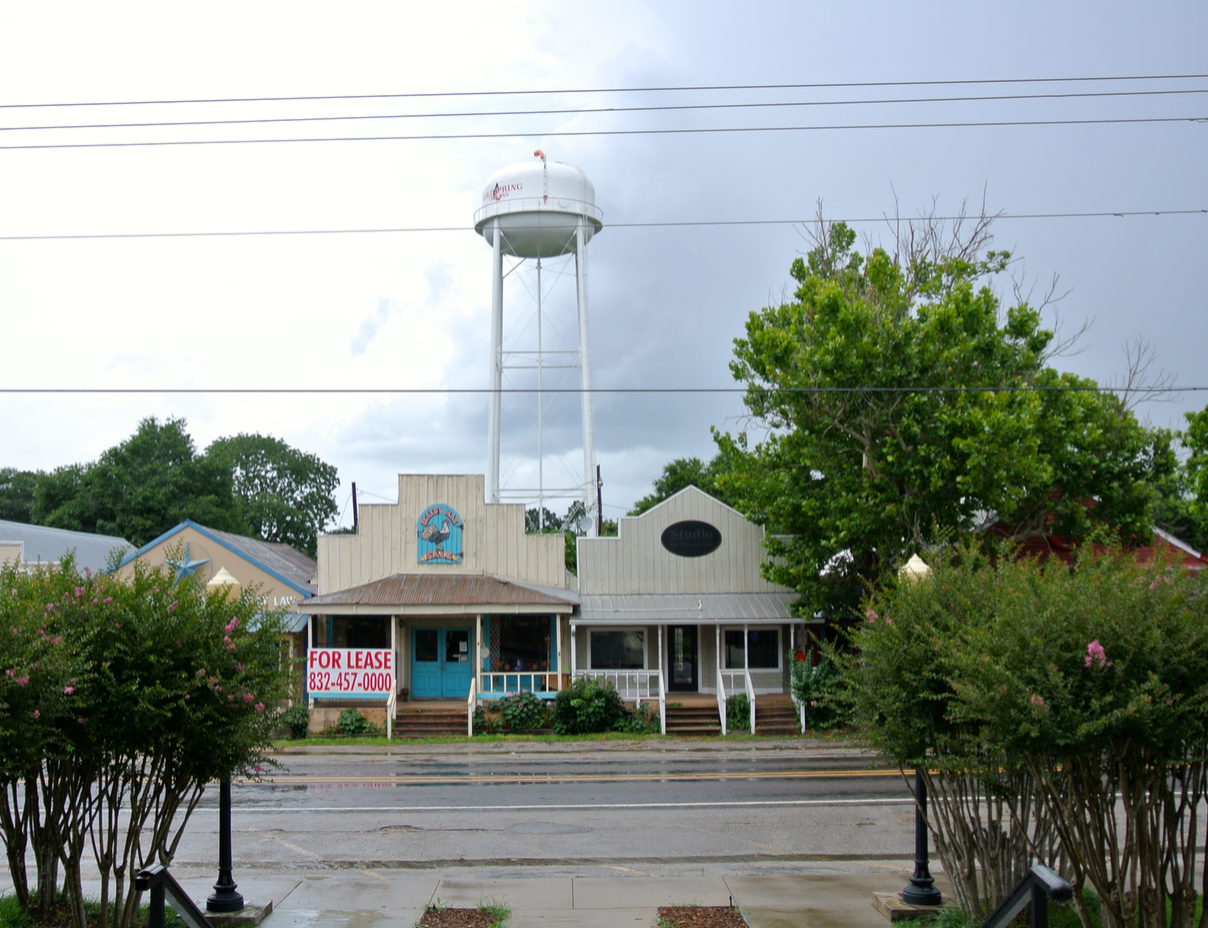 The view of Byrd Avenue from the northern doors 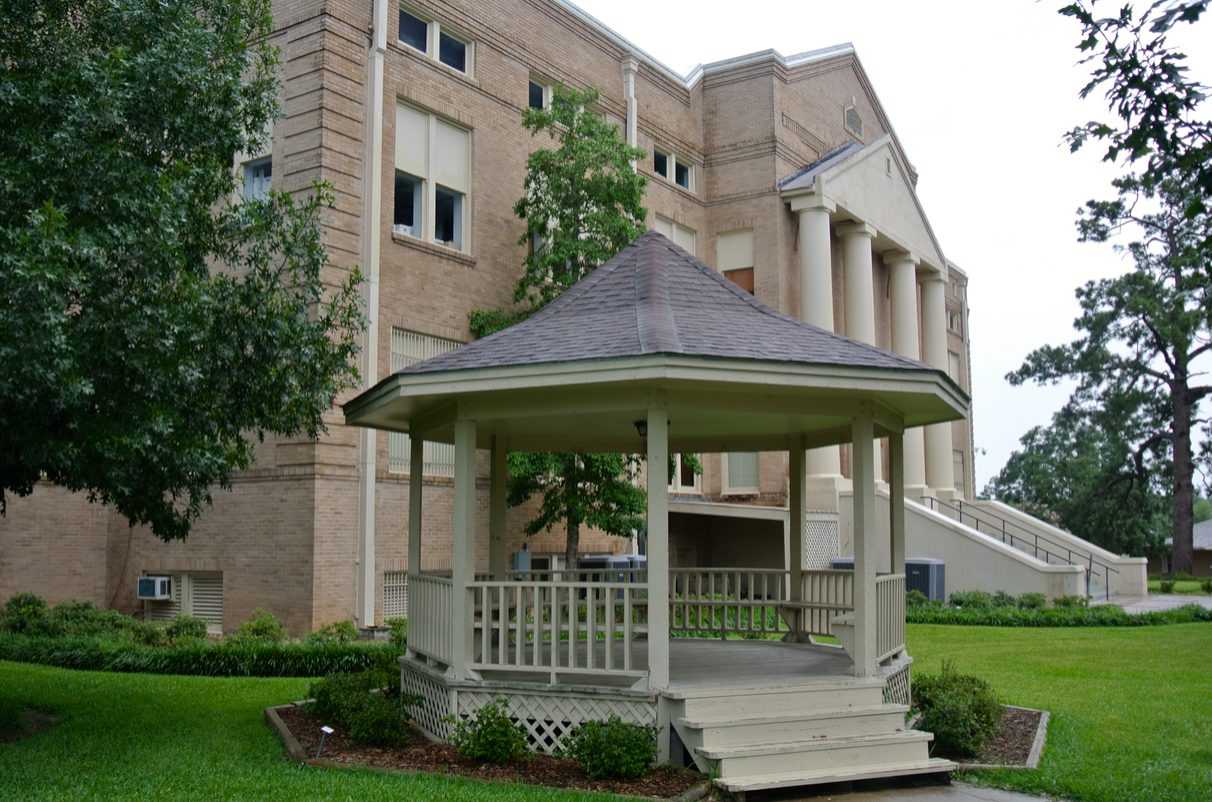 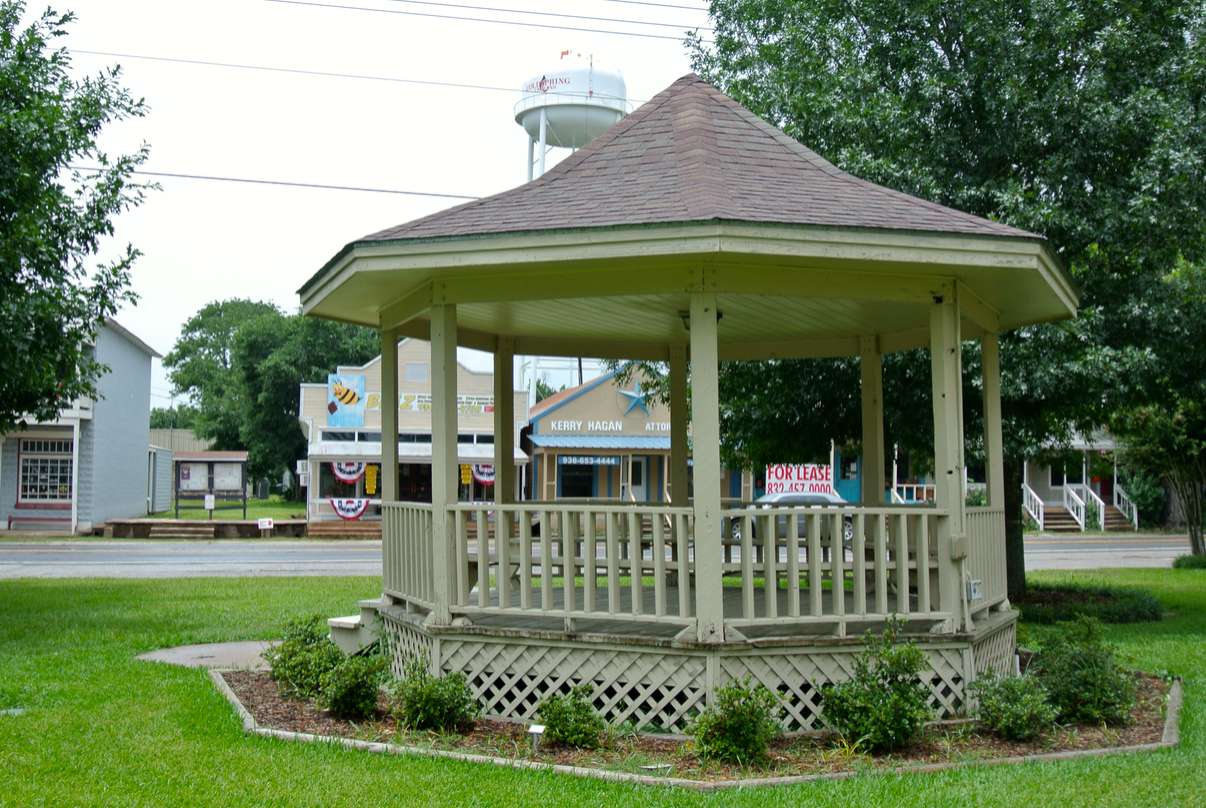 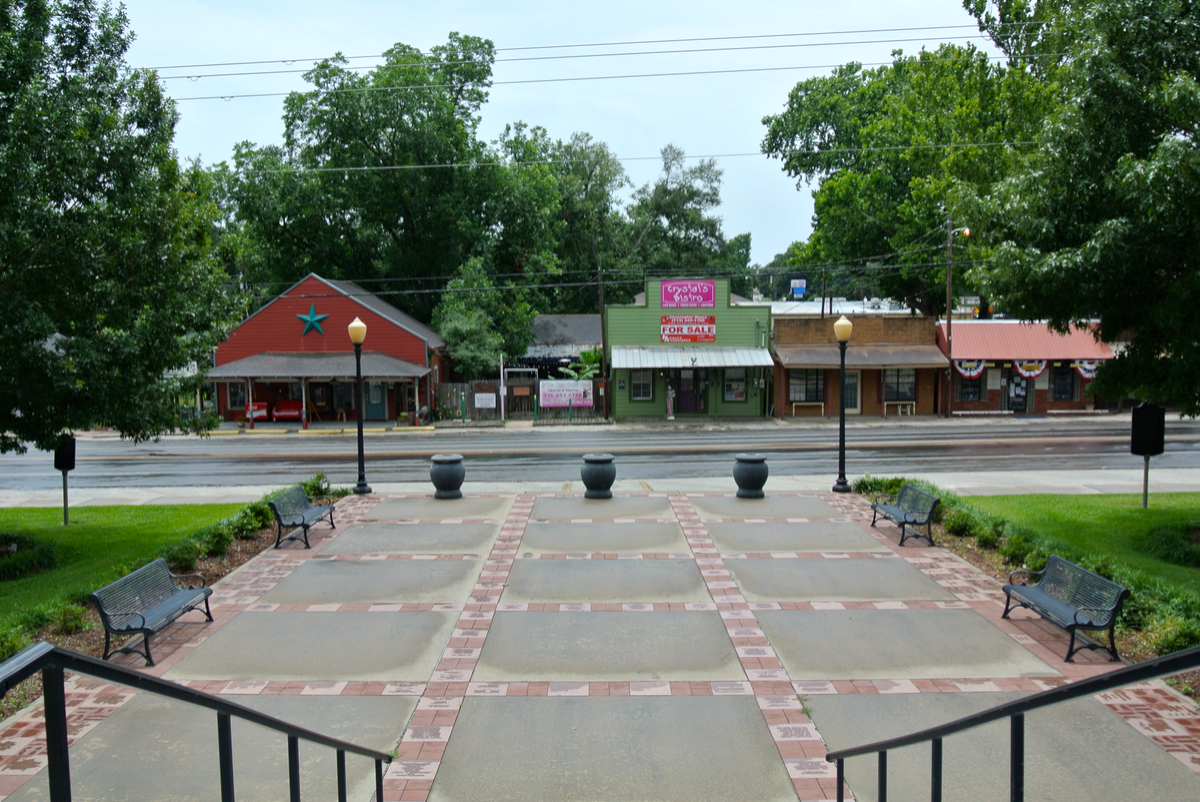 The view of Church Street from the western doors 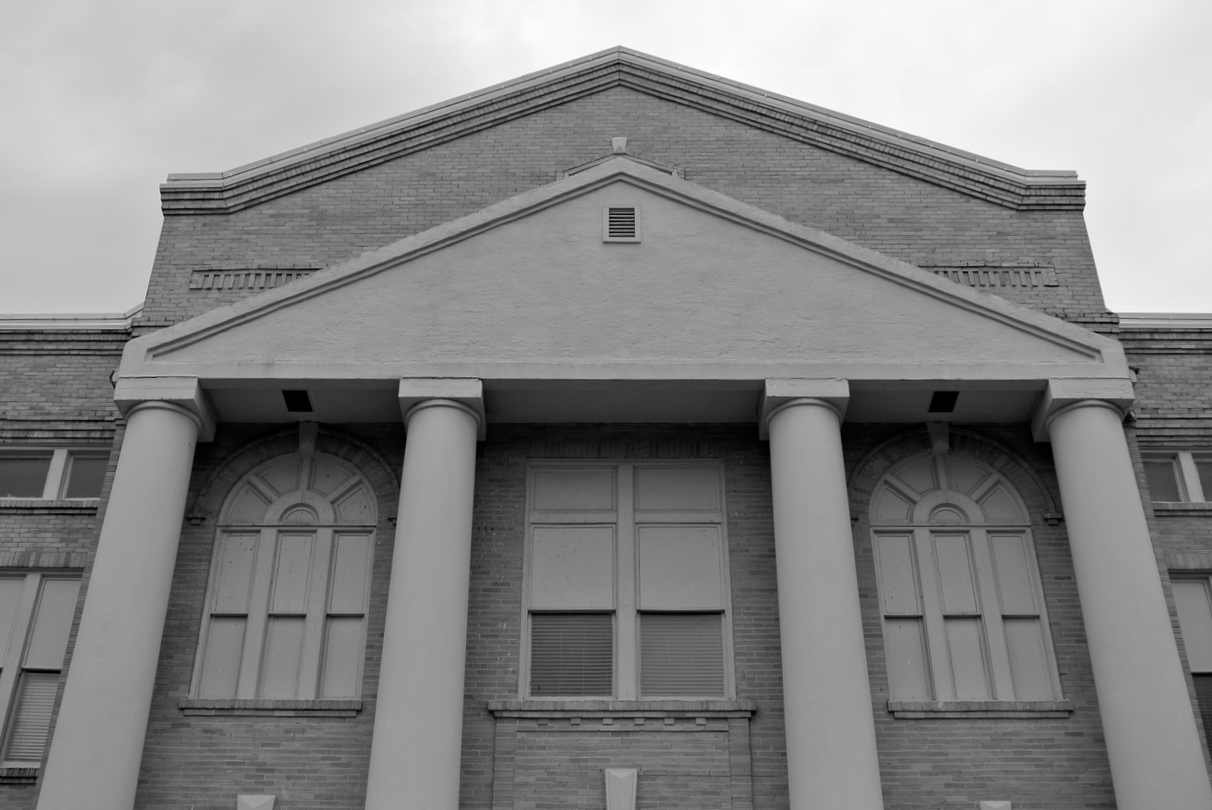 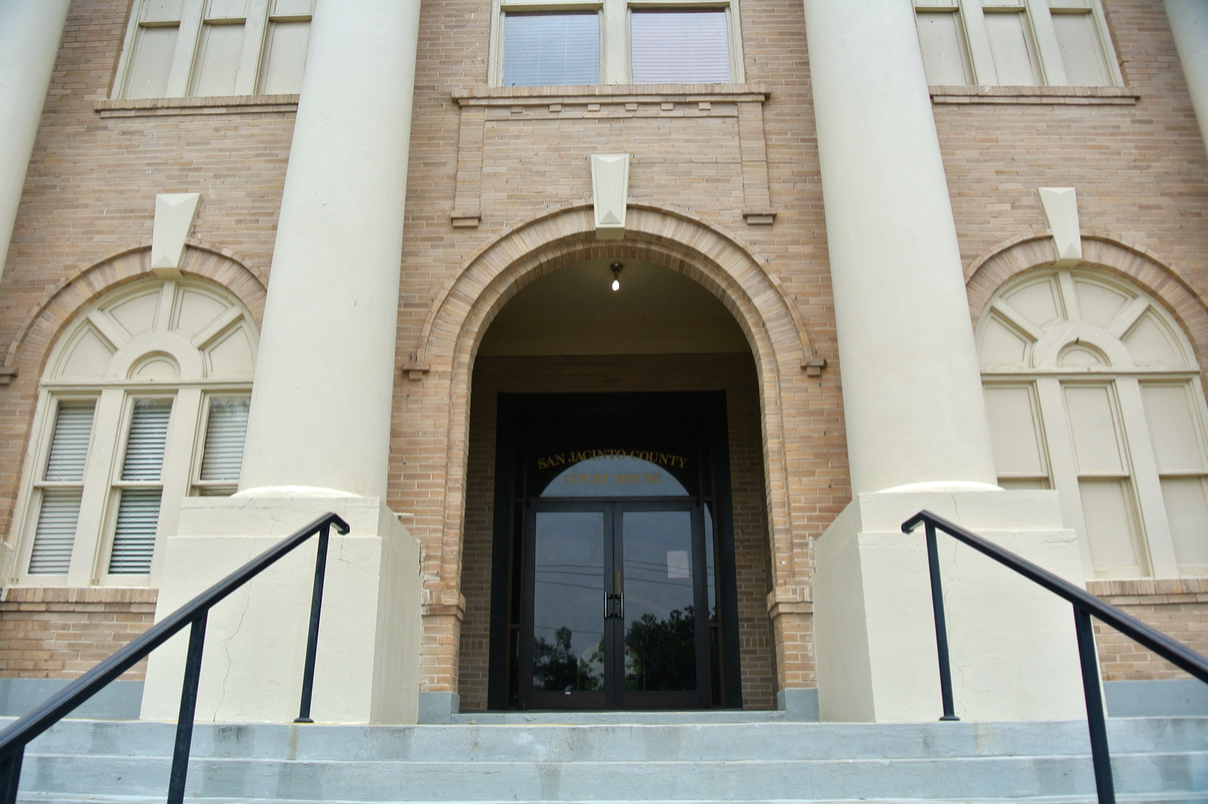 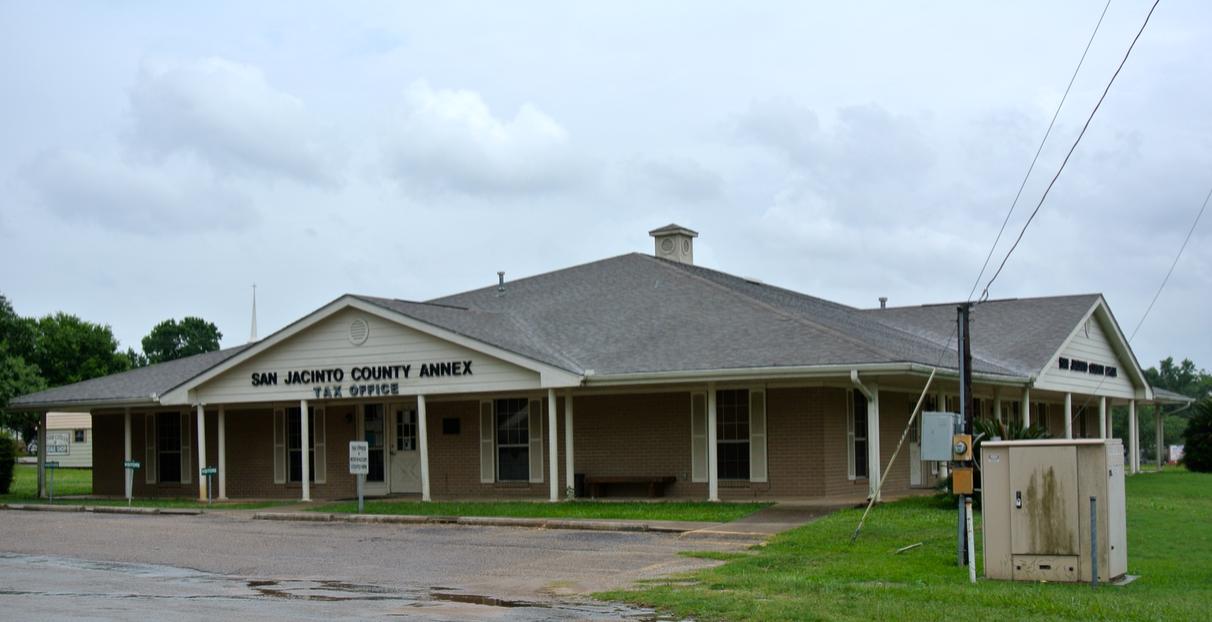 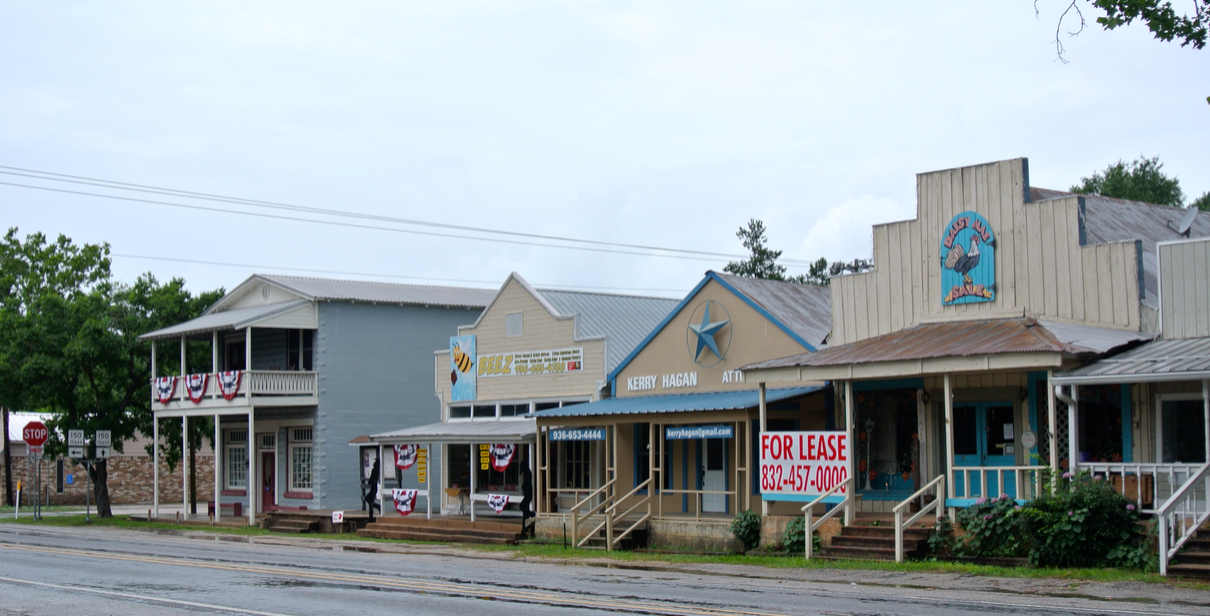 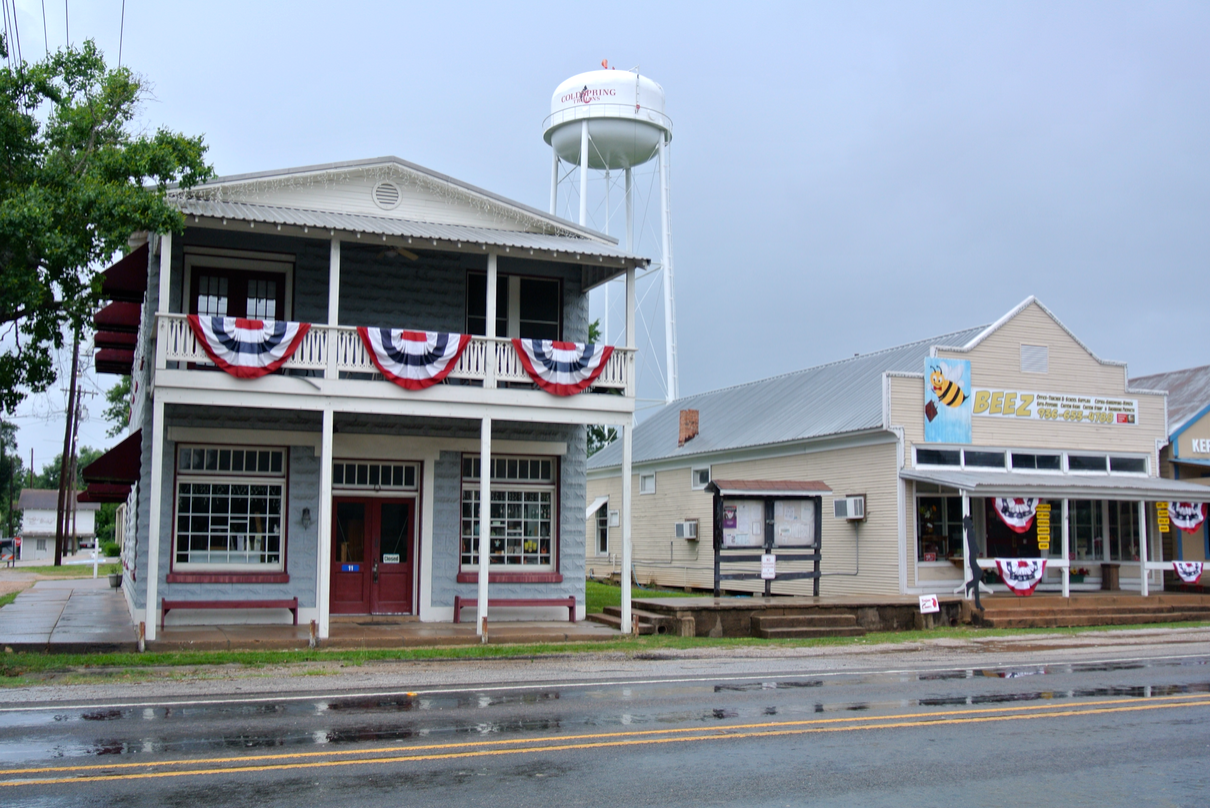 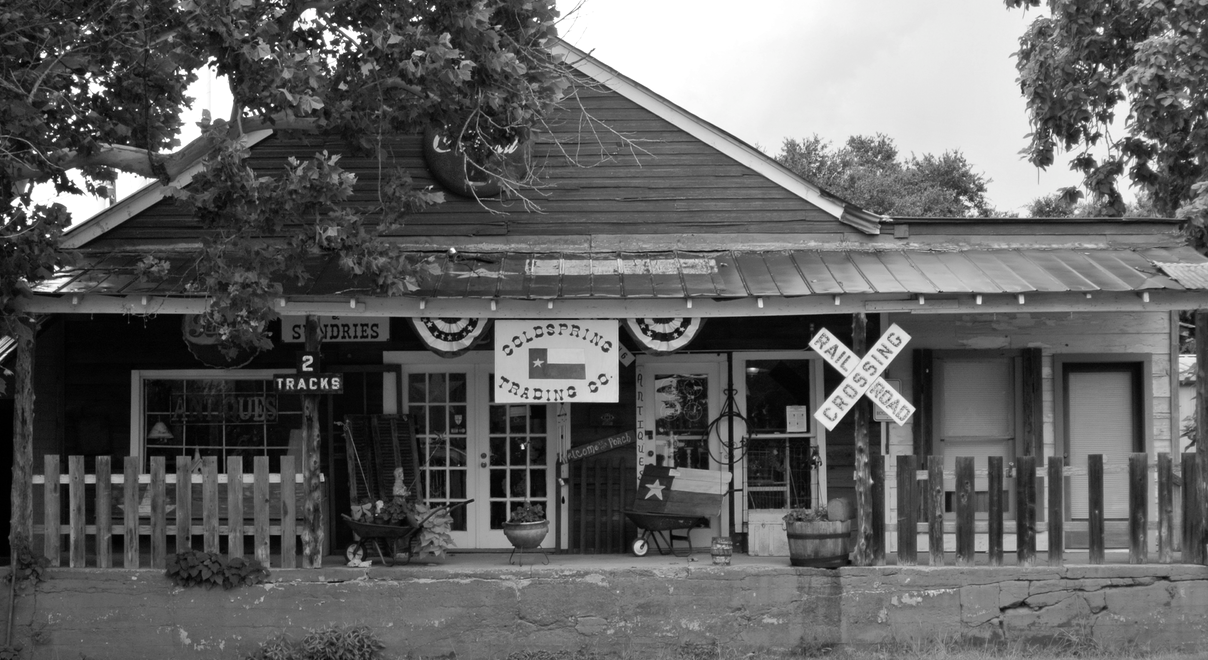 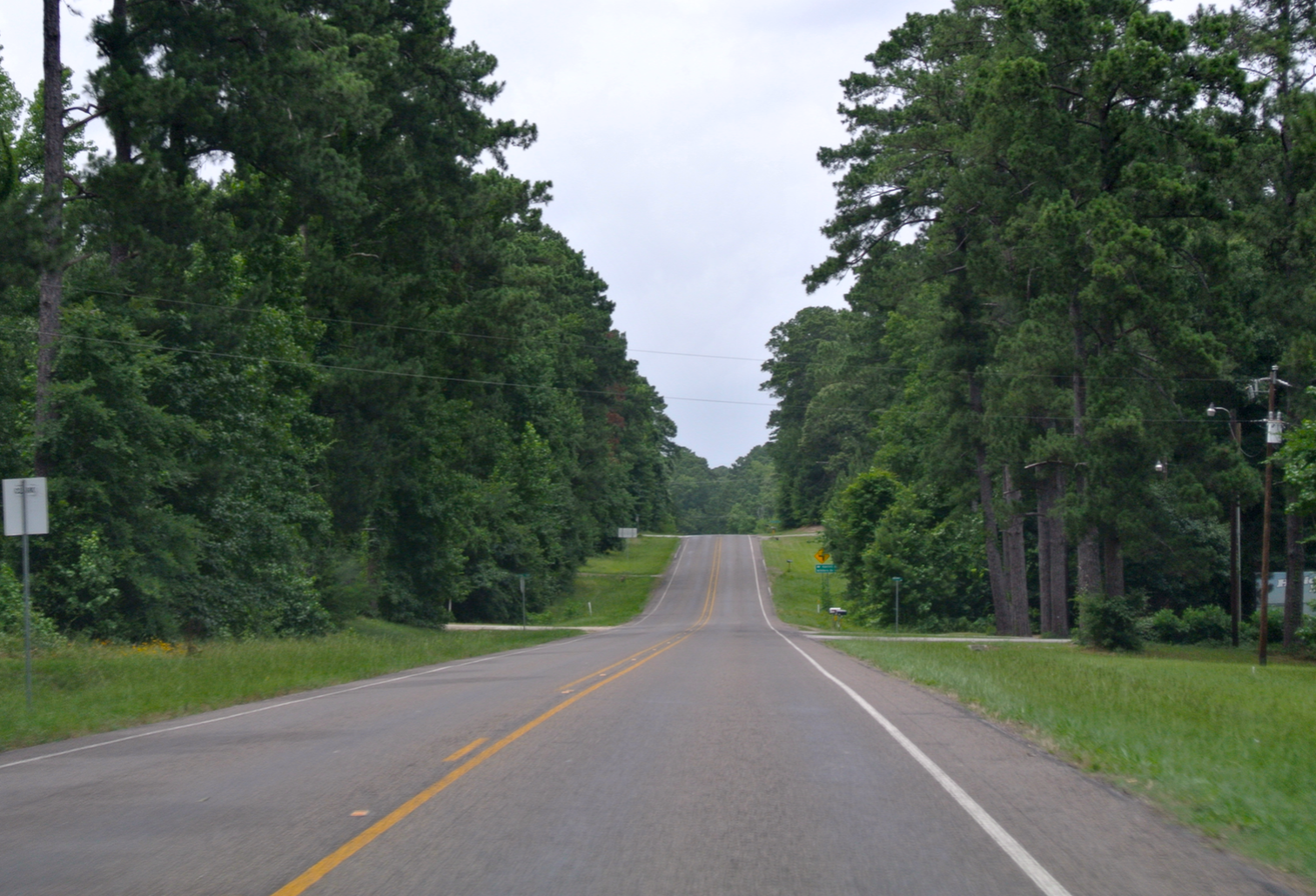 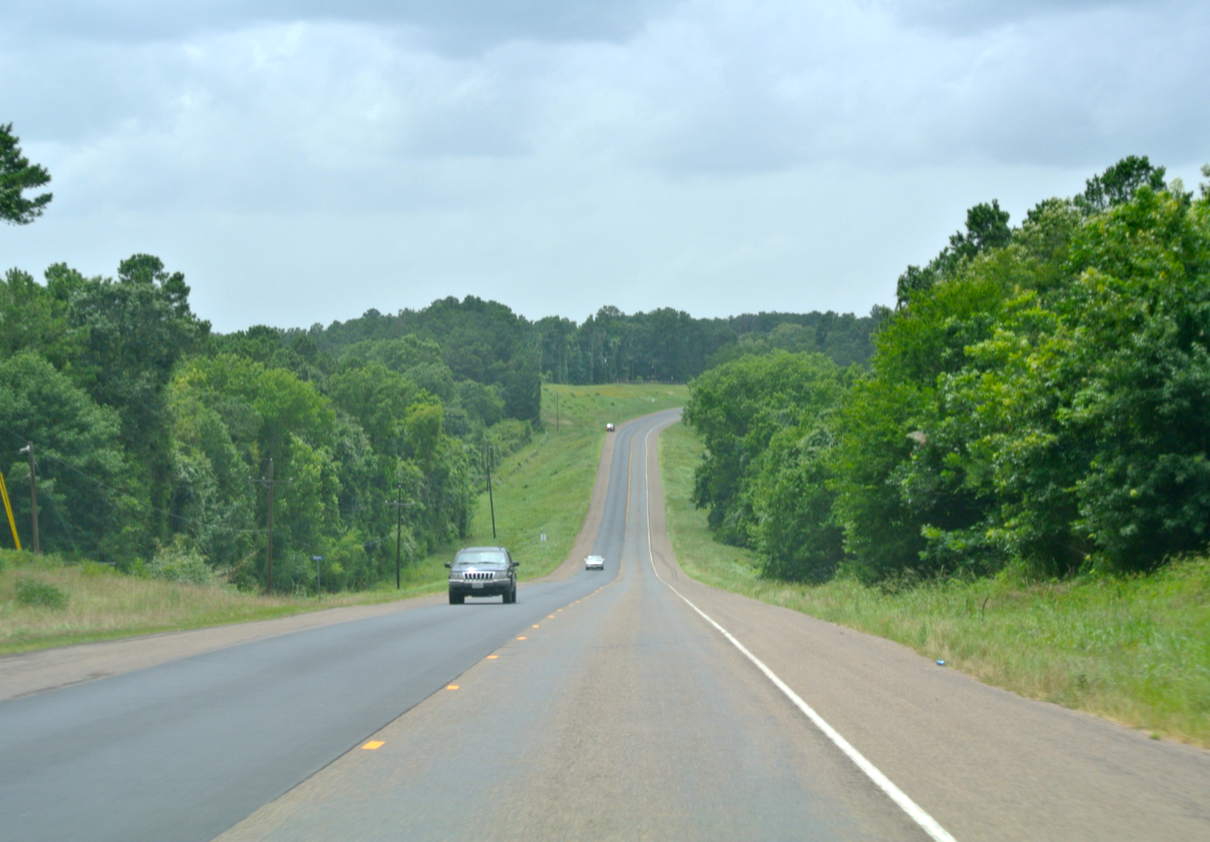