“Polk County, named after President James K. Polk, was one of twenty-three counties formed by the first state legislature of Texas in 1846. The boundaries established on March 30 closely followed those of the old northern division of Liberty Municipality, a subdivision of the Department of Nacogdoches established by the Mexican government in 1830. On August 13, 1870, the part of Polk County west of the Trinity became San Jacinto County. The present area of Polk County was fixed on March 11, 1875, when a portion of Trinity County was annexed.” 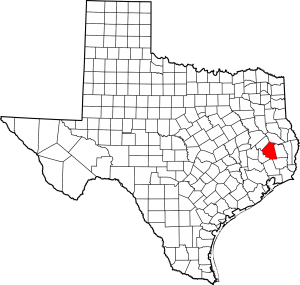 “Livingston, formerly Springfield, was selected by a vote as the county seat in 1846, and the first commissioners’ court met there in September. The town is still the county seat. The new county filled rapidly with American settlers between 1835 and 1860. The first communities were concentrated on the Trinity River, but others quickly appeared along the primary creeks. Important pioneers include Pierre J. Menard, who represented Liberty Municipality in the Consultation at San Felipe, and George T. Wood, governor of Texas from 1847 to 1849.”

“Because it had been dependent on the plantation system the county was economically fragmented after the [Civil] war. The number of farms nearly doubled, while the population stayed about the same and agricultural production decreased sharply. The corn crop declined by 30 percent between 1859 and 1869, and cotton exports in the same period fell by half.”

“Despite an overall increase in rural population, agriculture has played an increasingly minor role in the economy of Polk County. From a peak in 1929 of 2,300 farms employing 3,191 people, the number of active farming operations fell to 456 in 1978 before recovering to 530 employing less than 200 in 1982. No cotton production has been reported since 1969, and only 3,518 bushels of corn were grown in 1982. Cattle remained a steady enterprise, with 18,894 recorded in 1982, but hogs and sheep practically vanished after World War II.”

“Horses and mules were numerous at the turn of the century, but in 1982 only 619 horses, and no mules, were found in the county. Products such as wool, sugar, molasses, and sweet potatoes, common in the nineteenth and early twentieth century, were no longer cultivated; instead, many farms lay fallow or grew hay, 16,380 tons of which was produced in 1981. In 1990 the production of peaches, blueberries, and vegetables was becoming significant.”

“Lumber production occupies much of the land in Polk County. In the twentieth century the value of the lumber industry increased remarkably. The greatest increase came after World War II, but the lumber boom helped ease the impact of the Great Depressionon the county. Although agricultural employment decreased, jobs in the timber and related service industries doubled between 1930 and 1940.”

“Development of industry in Polk County was facilitated by a great improvement in transportation. Early commerce depended on a few roads or the Trinity River; by 1841 Drew’s Landing and Smithfield were busy shipping points. The Houston, East and West Texas Railway was completed north across Polk County in 1881, and the tracks have been used by the Southern Pacific since 1961. Many small lines, such as the Moscow, Camden and San Augustine, were built by lumber companies during the timber boom, but most have been abandoned.”

“County developed its utilities during the period of increasing population between 1880 and 1940. The Livingston Telephone Company was organized on August 3, 1903, with forty telephones in service. Several private and municipal companies provided phone service to the county in the 1980s. The Livingston Power Plant began providing electricity at night in 1905 from a small wood-fired steam engine. Several local businessmen purchased the plant in 1907 and initiated daylight service in 1909. The Livingston Municipal Light Department still operates, but most rural households get electricity from Gulf States Utilities or Texas Power and Light Company. Entex, Incorporated, sells natural gas to county residents.”

“Polk County remains predominantly rural, but timber rather than agriculture has become the main enterprise. Rural inhabitants increased three times faster then urban residents within the county between 1970 and 1980, when 80 percent of the population lived in unincorporated areas. The lumber and related service industries absorb the greater part of the new work force. Polk County led the state for timber production with 38.4 million cubic feet, mostly pine, in 1981, but the next year was 218th among the 254 Texas counties in agricultural production. 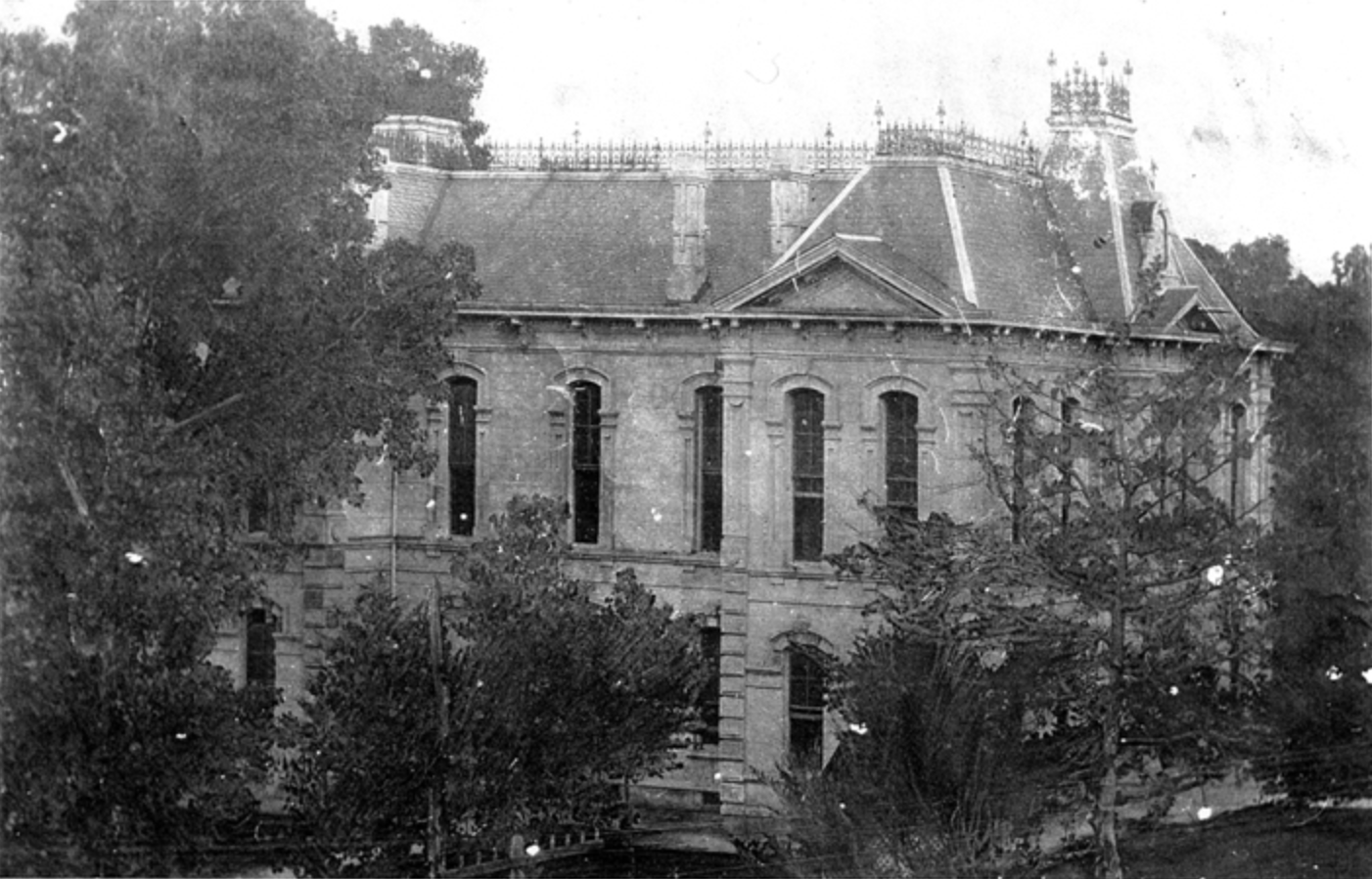 Eugene T. Heiner designed this two-story building in the Second Empire style. The contractor was W.C. Wells. It cost the county $17,500 and was demolished some time prior to 1923. 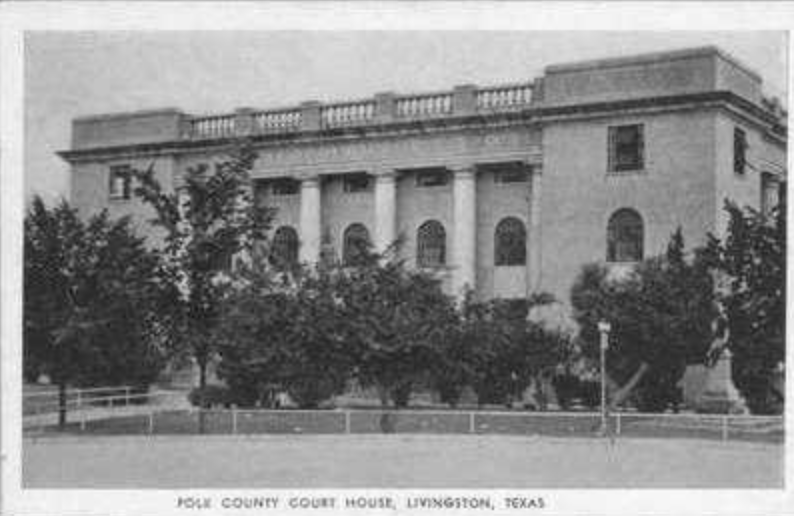 This Classical Revival building was designed by the firm of McLelland & Fink, while Isaac Young served as the contractor. 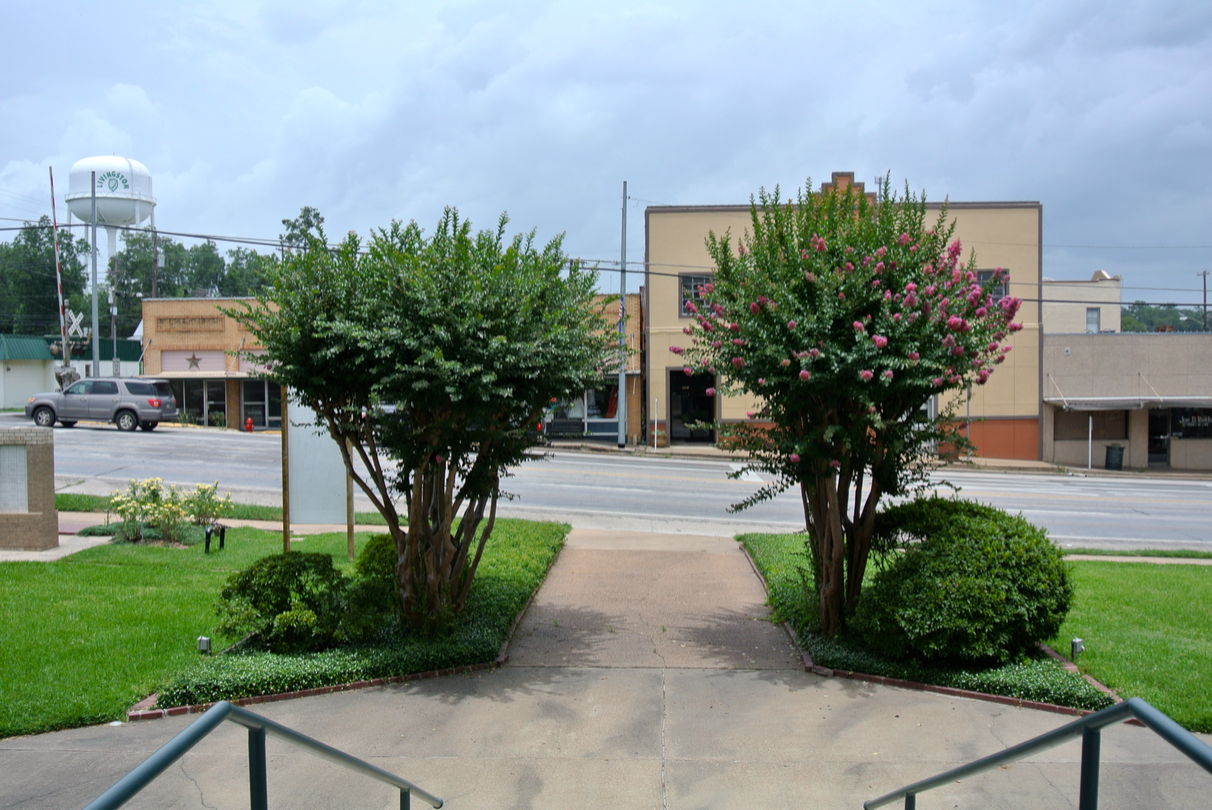 The view of Church Street from the northern doors

At the time of my visit, the courthouse was undergoing a THC restoration. 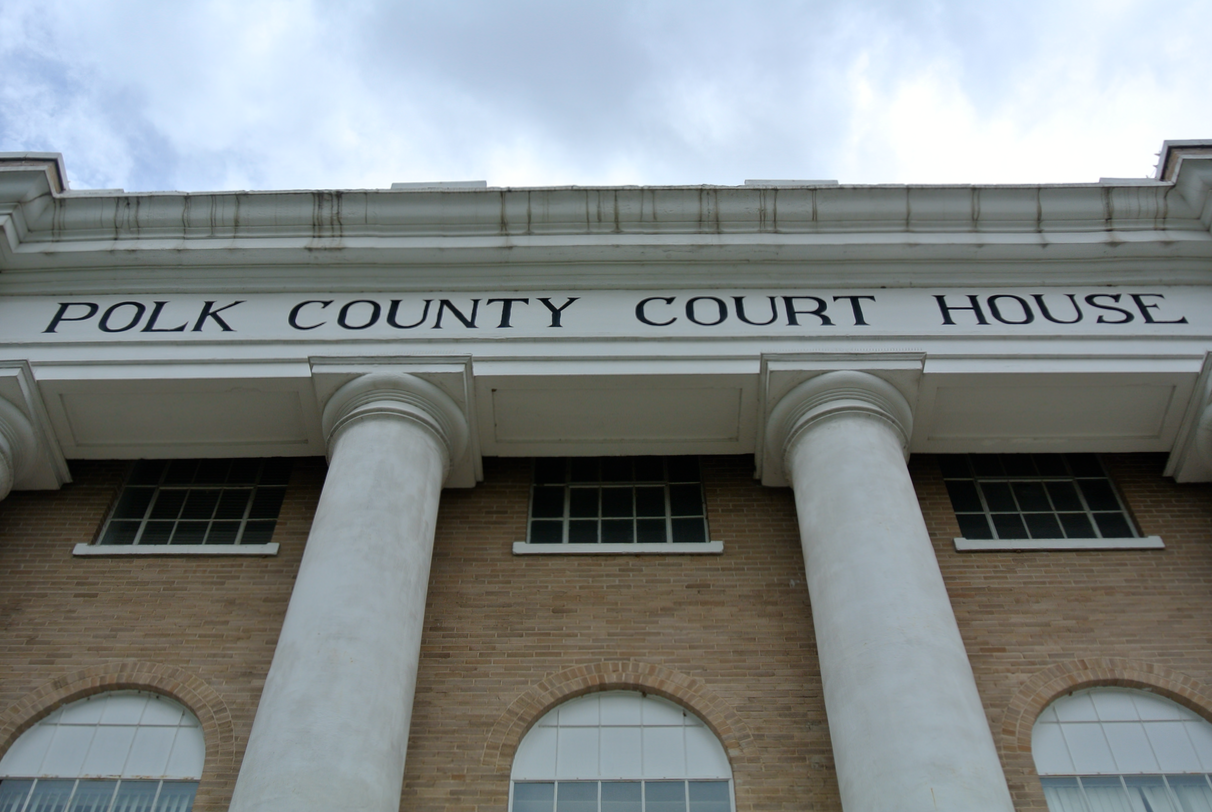 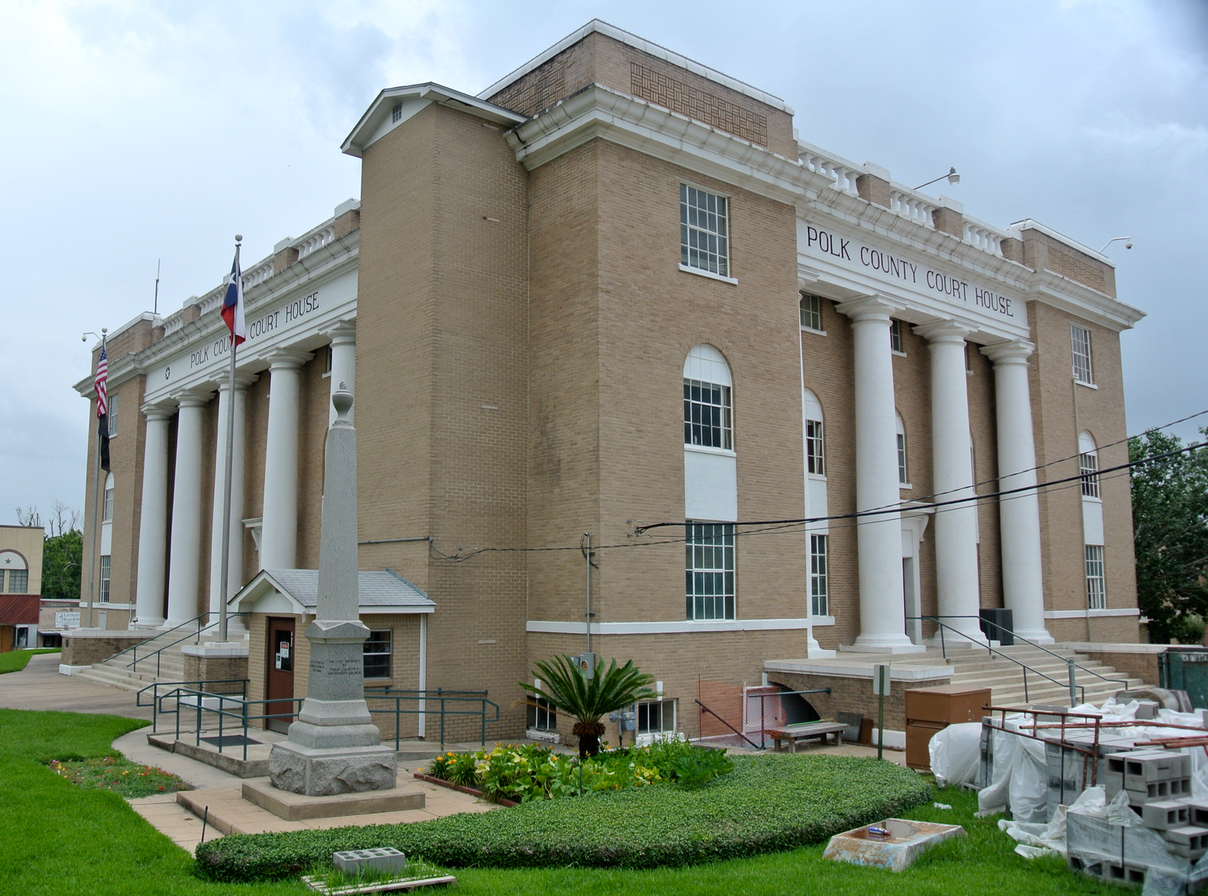 This is the northwest corner. The elevator shaft makes for an unfortunate, aesthetic afterthought. 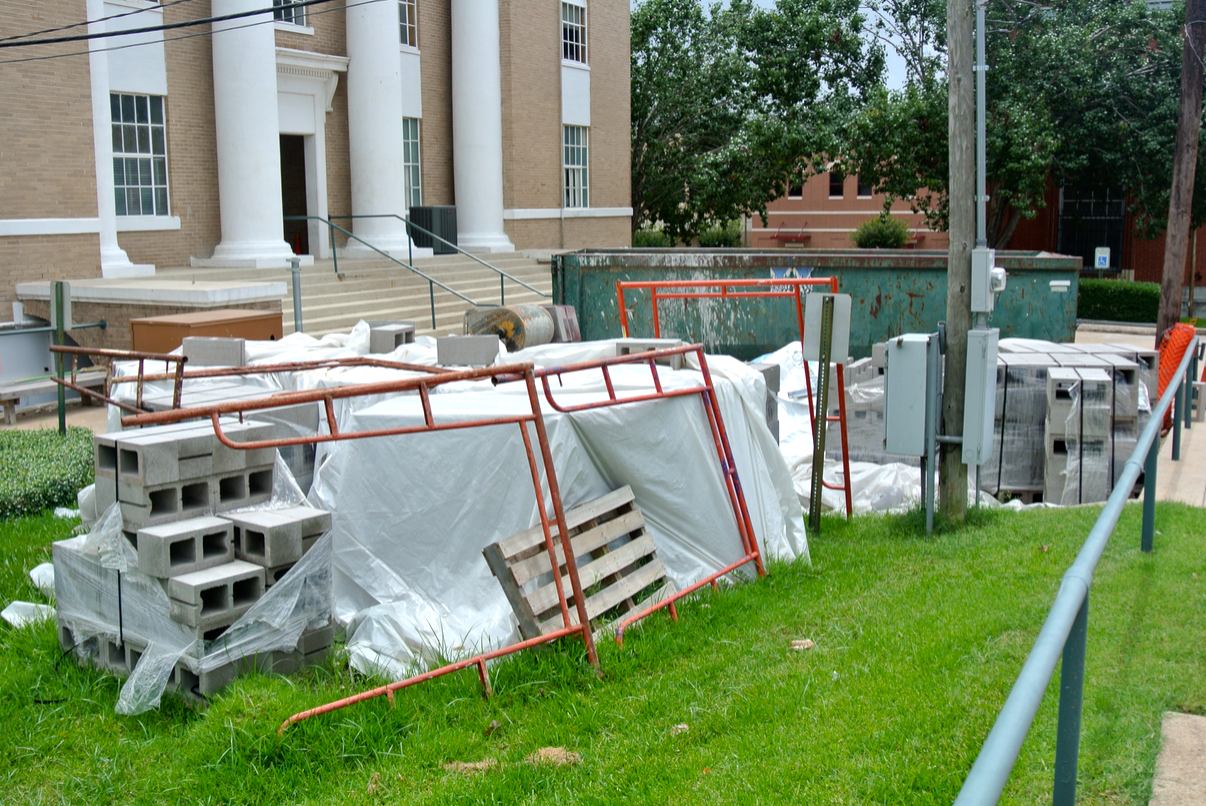 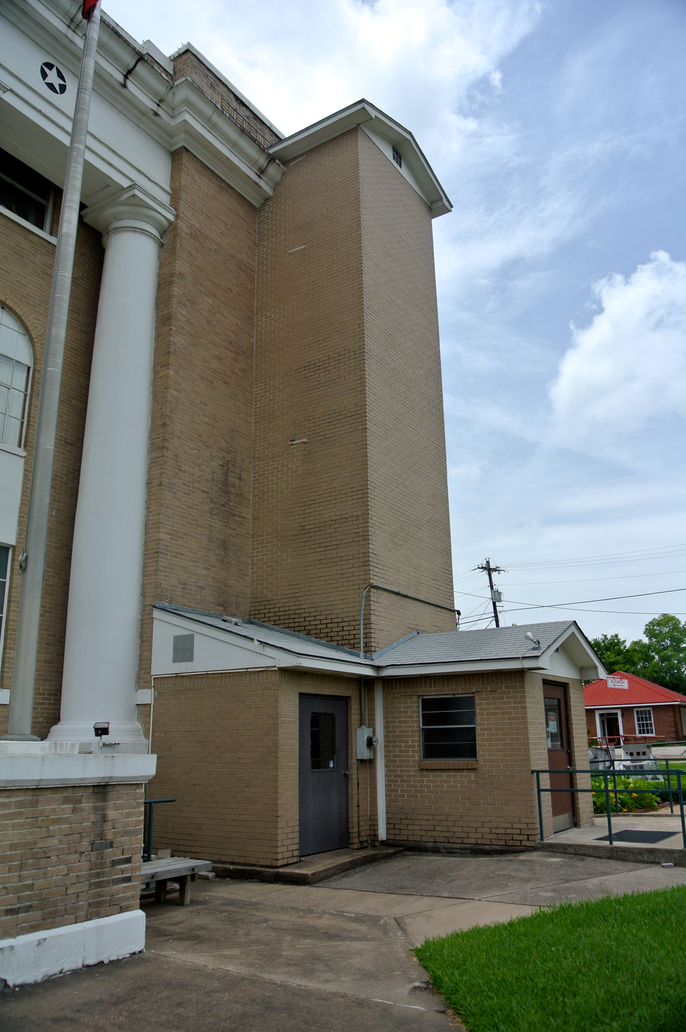 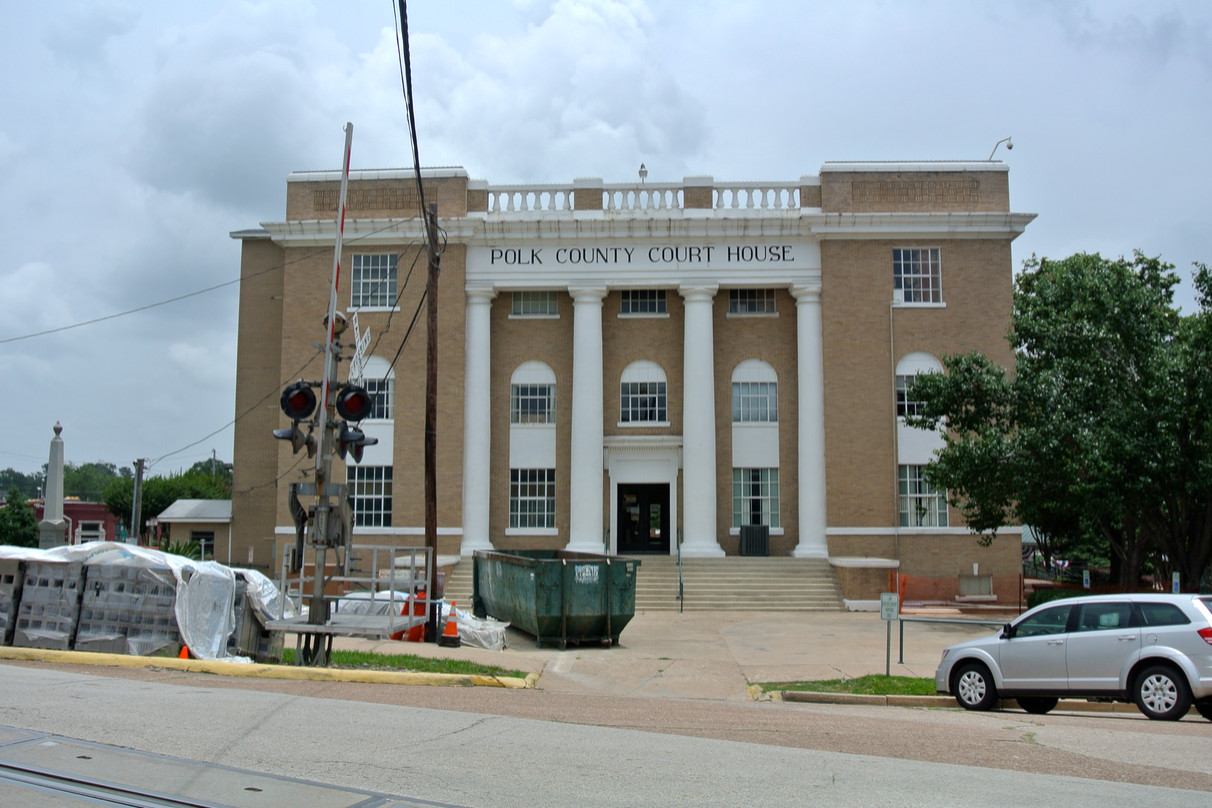 The western façade, on Jackson Avenue 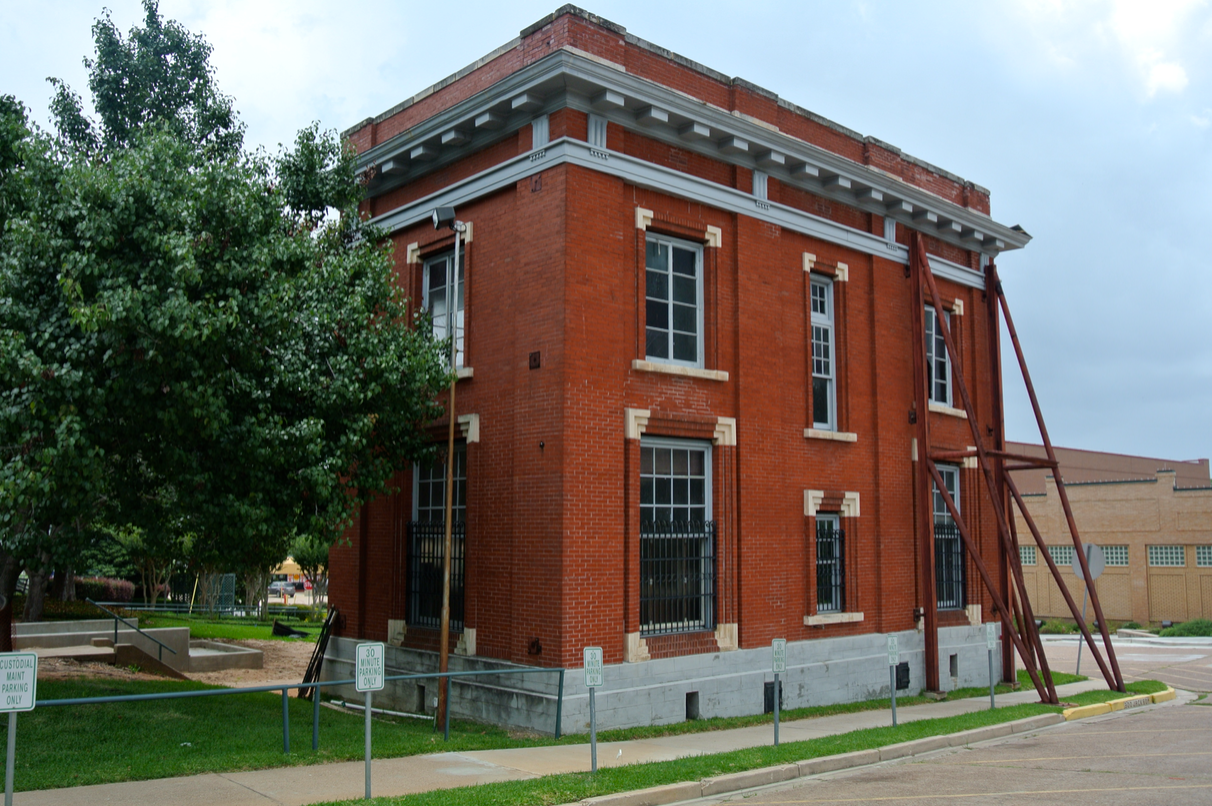 On the southwest corner of the square is the original courthouse annex, constructed in 1905. It was once thought that 1884 courthouse architect, Eugene T. Heiner, was behind this design, er however it’s now more reasonable to assume that the firm C.H. Page & Brothers created the plans for this building. 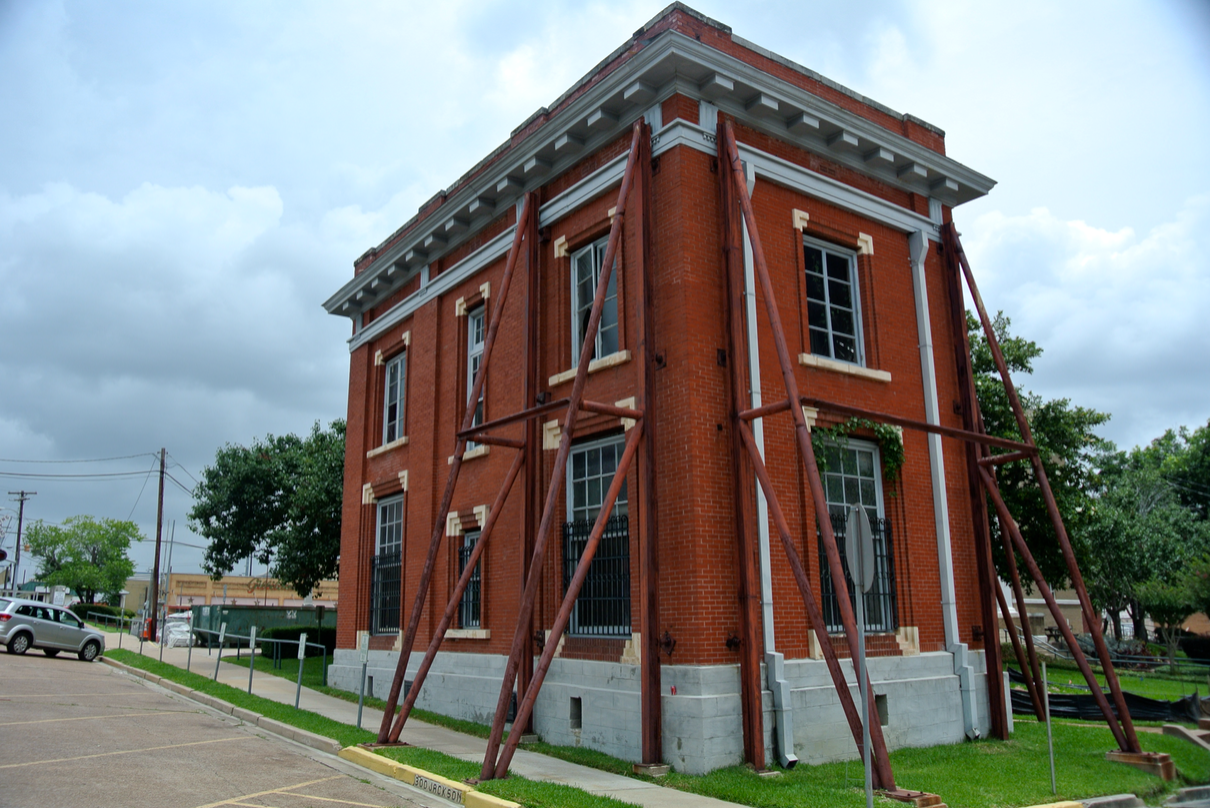 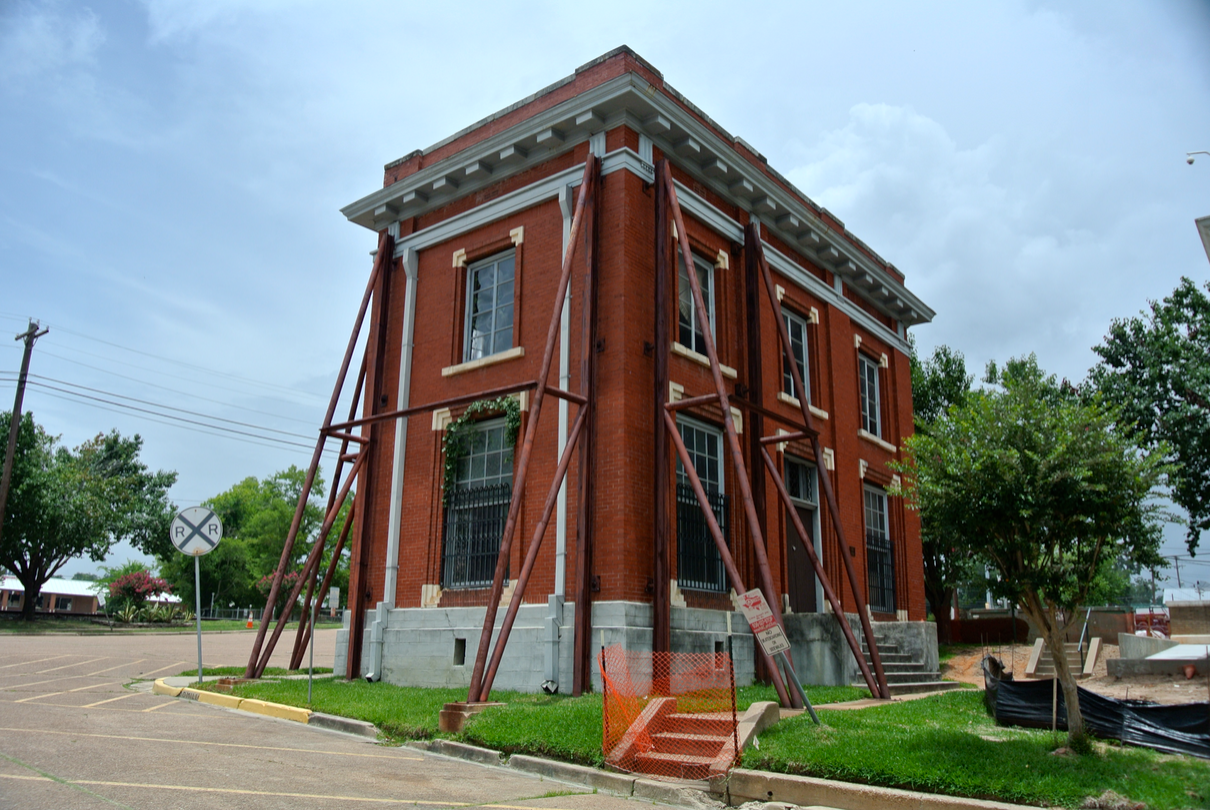 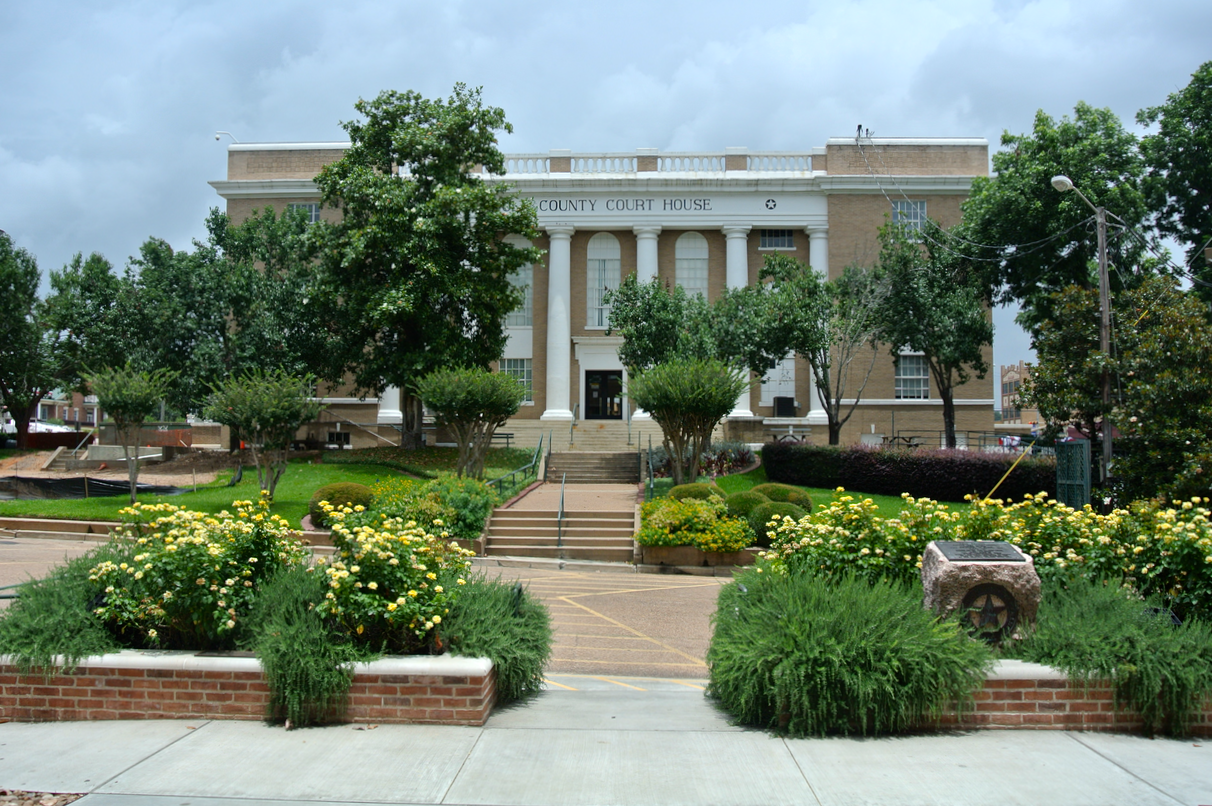 The southern façade is heavily landscaped. It faces Mill Street. 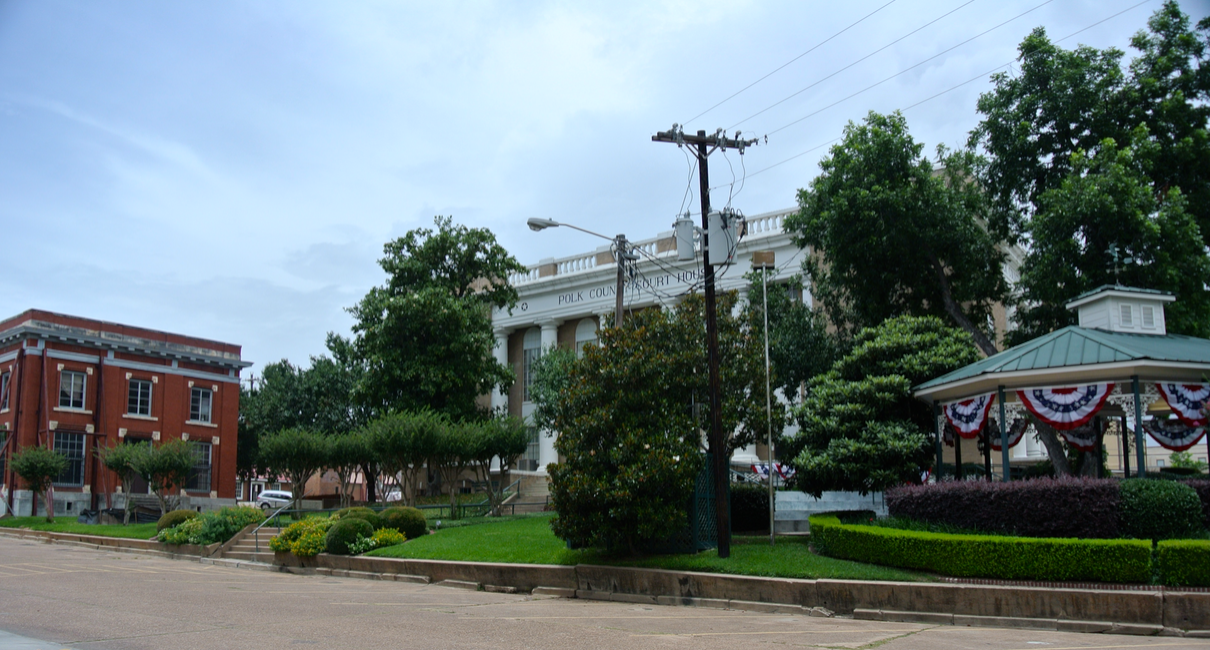 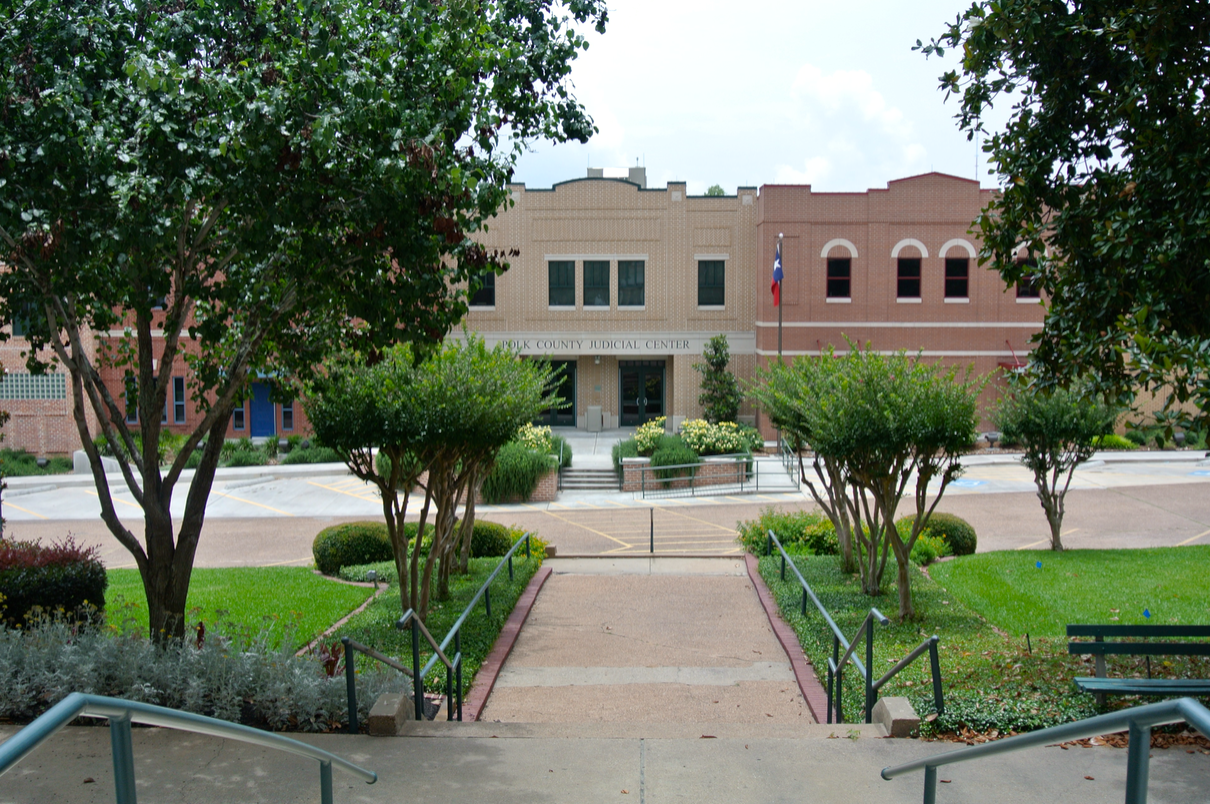 Here’s Mill Street, as seen from the southern doors. The building you see is the Polk County Judicial Center. 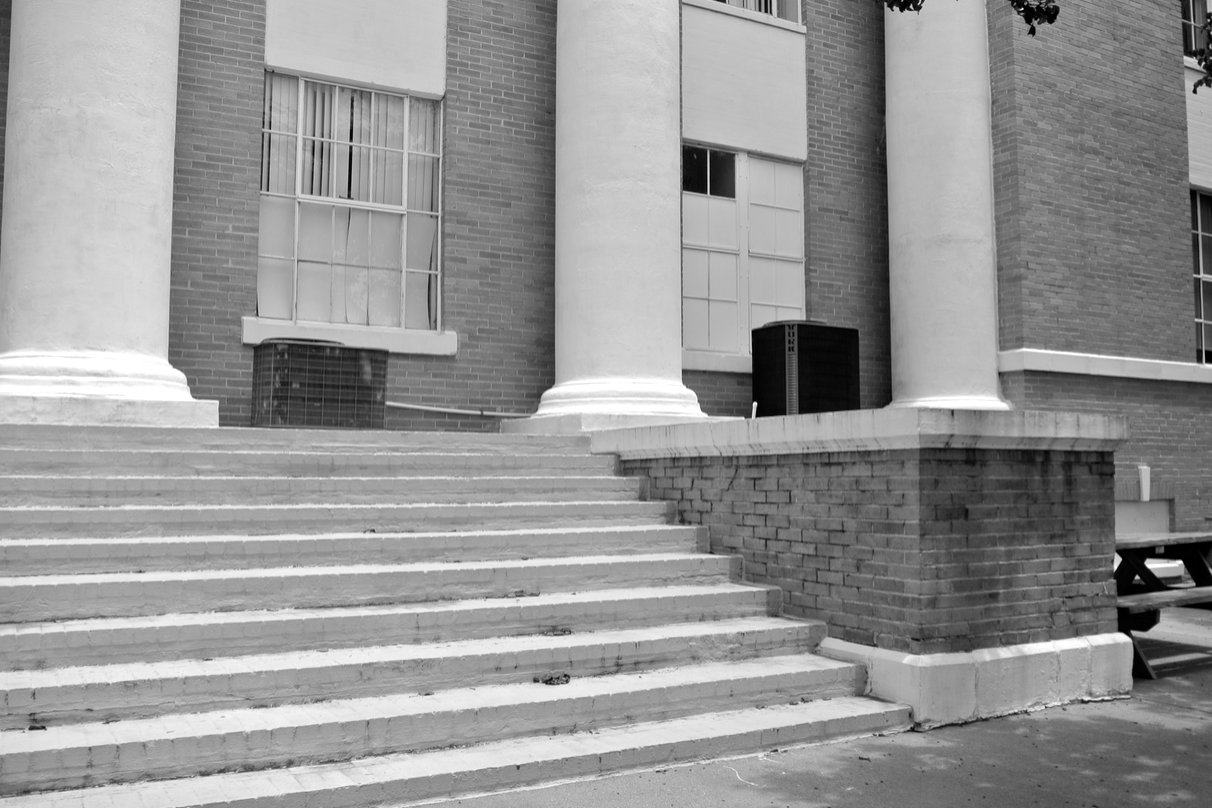 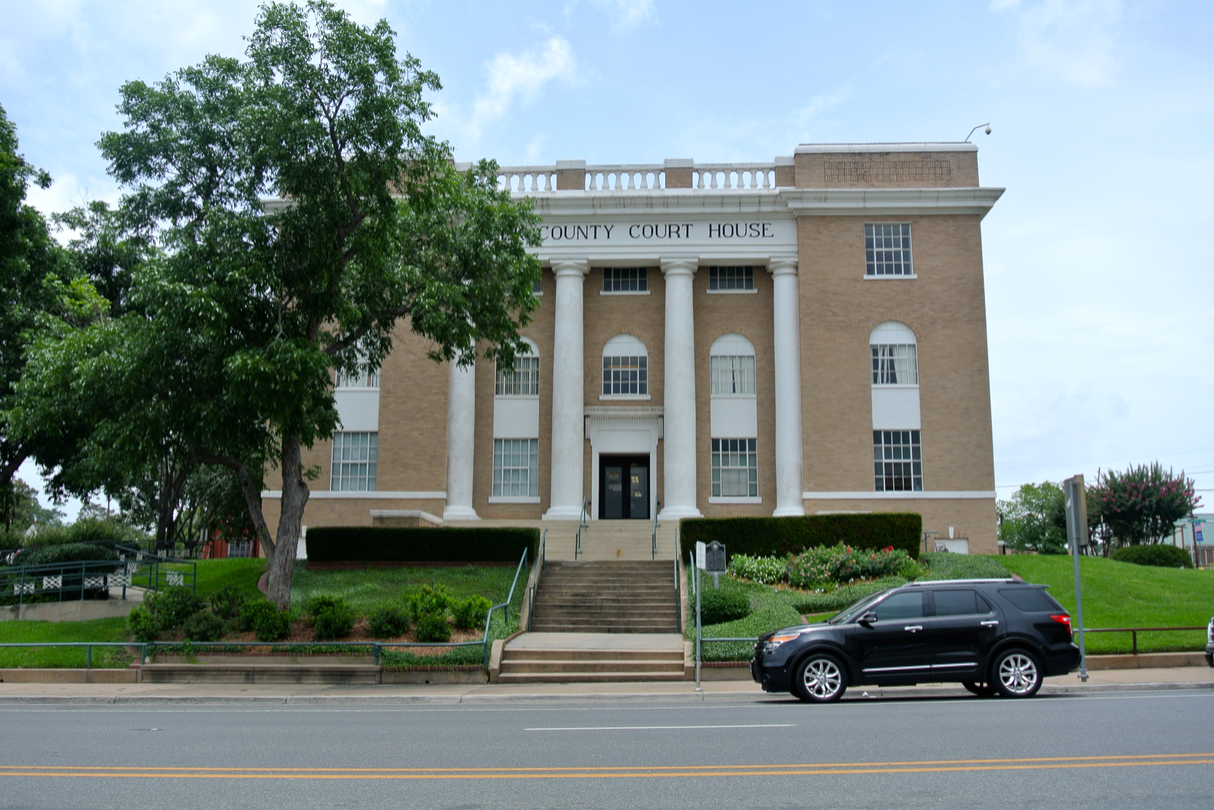 The eastern façade, on Washington Avenue 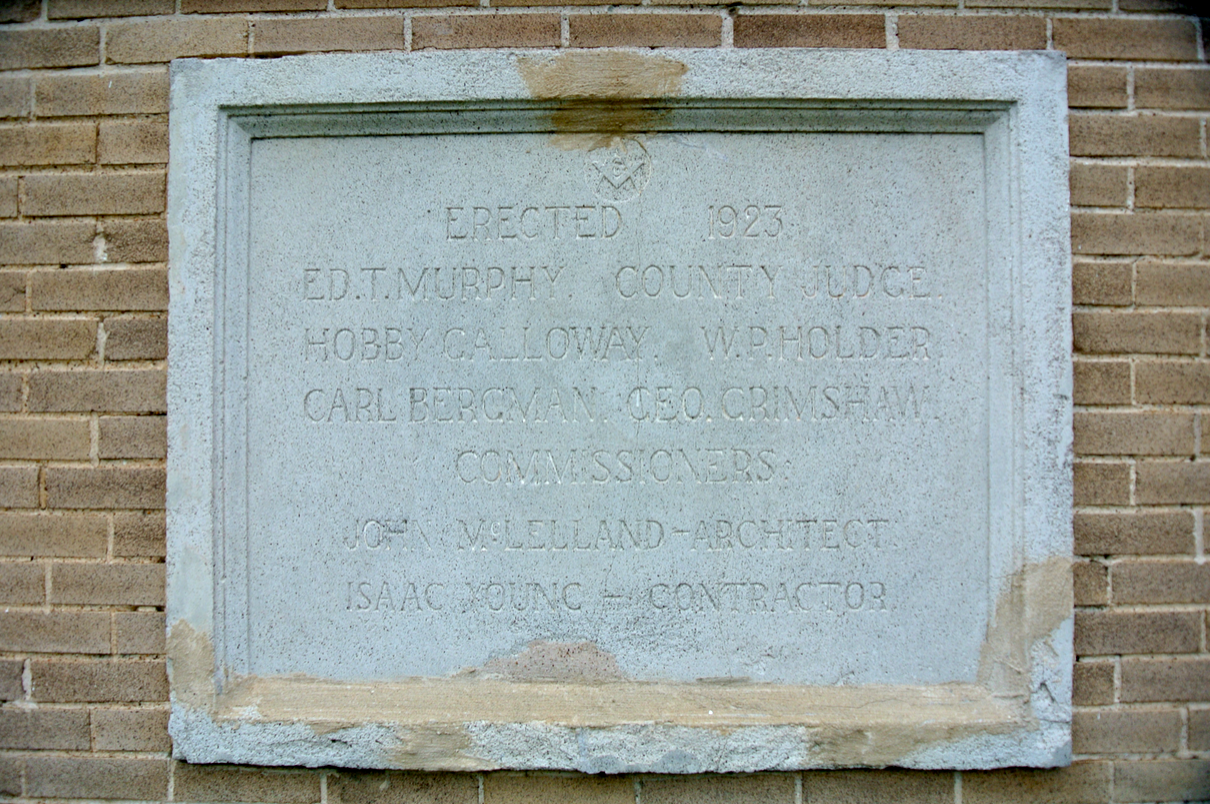 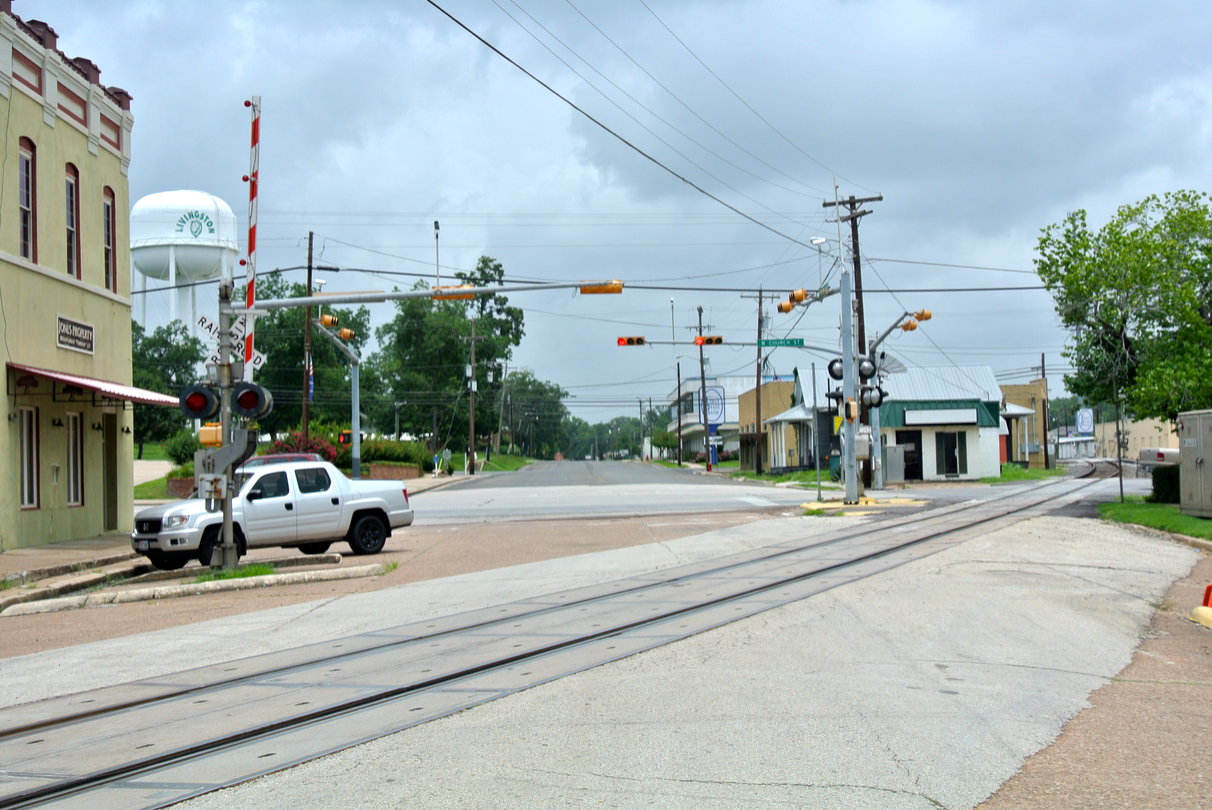 While in Livingston, I discovered that the railroad cuts directly through the courthouse square. This is a rarity across Texas. 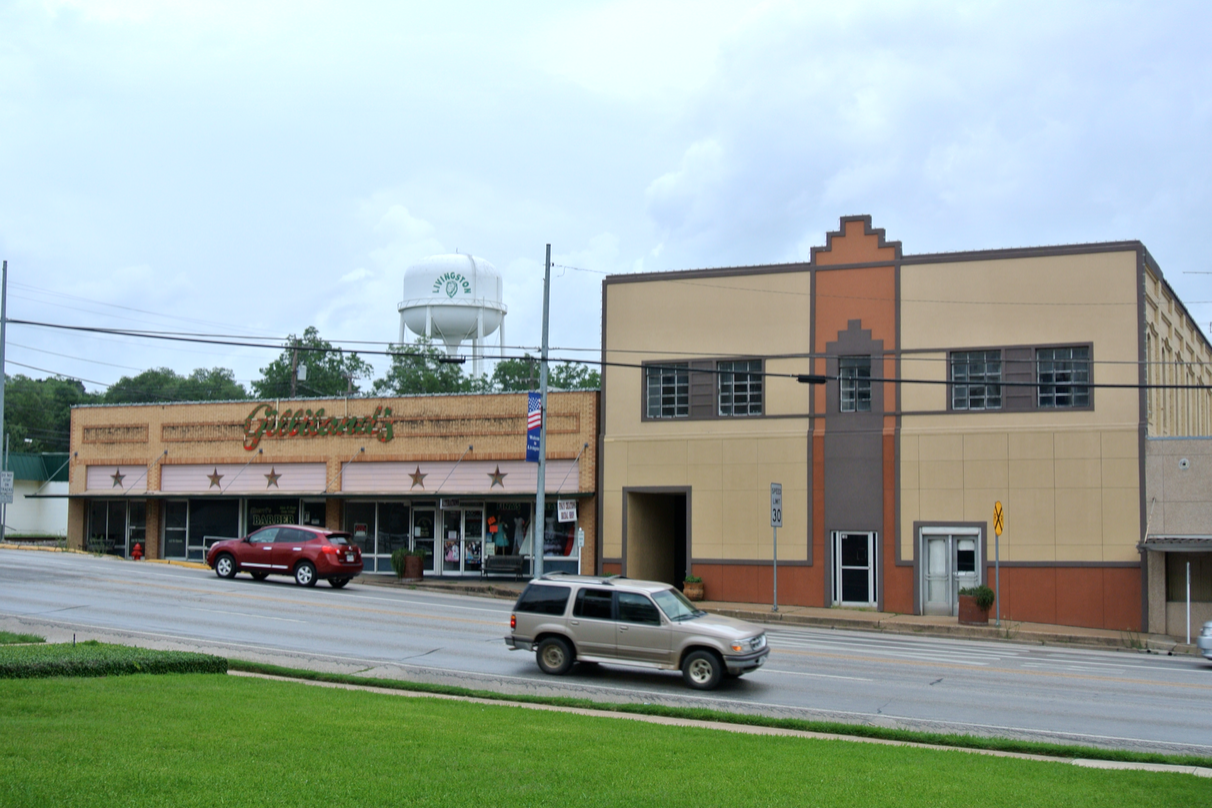 The Trinity River is dammed on Lake Livingston in western Polk County. 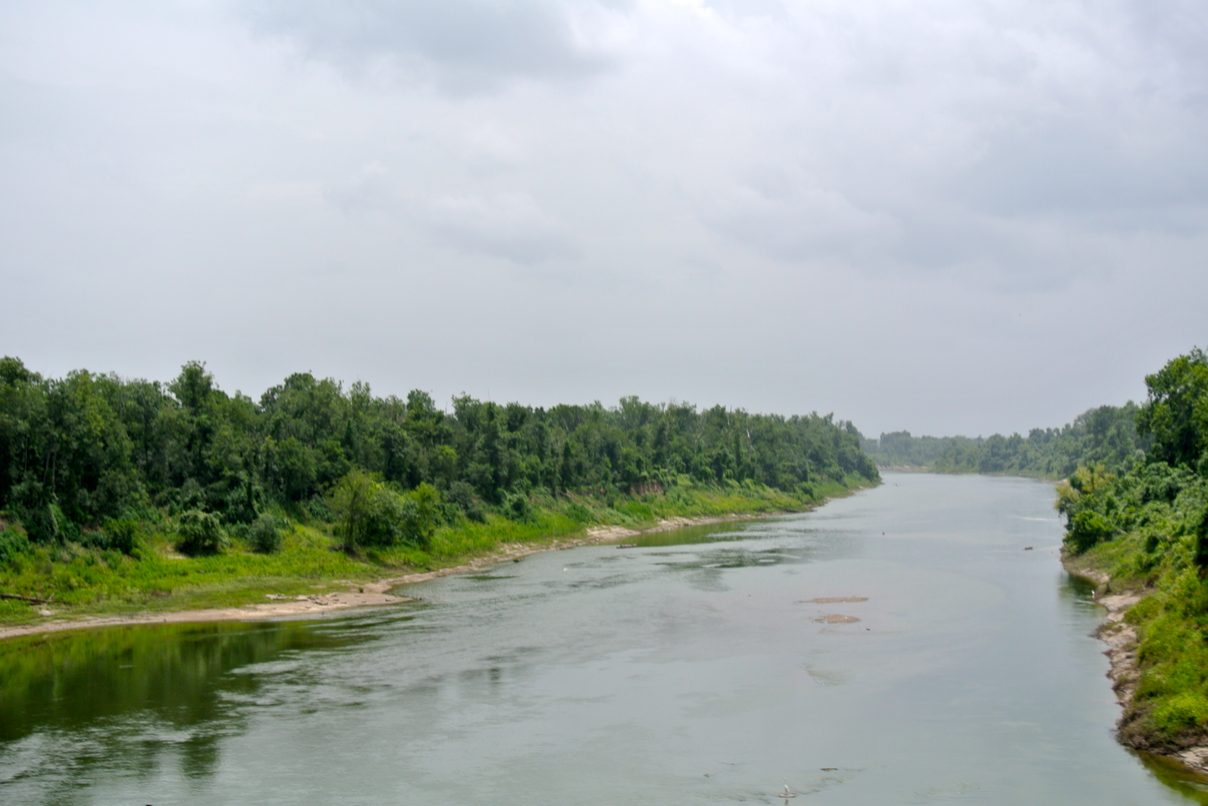