“Cass County comprises 937 square miles of the East Texas timberlands, an area that is heavily forested with a great variety of softwoods and hardwoods, especially pine, cypress, and oak. The terrain ranges from nearly level to hilly, with an elevation ranging from 200 to 632 feet above sea level. Several stony hills in the western part of the county rise to a height of more than 200 feet and have been protected from erosion by the ironstone material that caps them. The largest of these hills are the Cusseta Mountains, five miles east of Marietta.”

“The Caddo Indians, an agricultural people with a highly developed culture, had occupied the area for centuries before the arrival of Europeans, but disease and threats from other Indians forced them to abandon the region in the final years of the eighteenth century. During the 1820s bands of Shawnee, Delaware, and Kickapoo Indians inhabited the area for a few years, but they abandoned their settlements in the mid-1830s.”

“Anglo settlement in the area that became Cass County began in the 1830s. Among the earliest settlers was Reece Hughes, who built a cabin near three mineral springs which later became known as Hughes Springs. The county was formed from Bowie County in 1846. Jefferson was chosen as the first county seat, but, after several fiercely contested elections, in 1852 Linden became county seat. The county’s boundaries were reduced in 1860 with the formation of Marion County, but, with the exception of small adjustments, have remained unchanged since that time.” 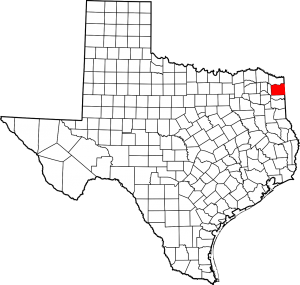 “The county was originally named Cass County in honor of Lewis Cass, a United States Senator from Michigan who had favored the annexation of Texas. During the secession crisis Cass, who had formerly been known as a Northern man with Southern principles, resigned his post as secretary of state when President James Buchanan declined to defend the federal forts in Charleston, South Carolina. When word of his actions reached Texas, the name of the county was changed to Davis in honor of Jefferson Davis. The republican-controlled state legislature of 1871 changed the name back to Cass.”

“Those who settled Cass County were for the most part southerners, and many of them were slaveholders. The white population built a way of life similar to the one they had known in the older Southern states and an agricultural economy based on cotton as the cash crop and corn and hogs as primary food crops. During the antebellum years agricultural production in the county expanded steadily; the amount of cotton produced grew from 1,573 bales in 1849 to 9,968 bales in 1859. Corn production expanded also, from 167,250 bushels in 1849 to 289,979 bushels in 1859. The number of hogs in the county expanded only slightly, from 16,732 in 1849 to 17,432 in 1859. The labor force in this agricultural economy was composed almost entirely of black slaves.”

“Cass County’s white population overwhelmingly supported the secession movement during the winter of 1860–61. When the secession ordinance was voted on in February 1861 Cass County voters approved it by a vote of 423 to 32. They also wholeheartedly supported the war effort of the Confederacy, but no estimates of the number of men from the county who served in the Confederate armed forces are available. Because Cass County was never invaded it escaped the physical destruction that devastated other parts of the South.”

“Throughout 1867 and 1868 there were repeated reports from agents of the Freedmen’s Bureau in Marshall that freedmen were being cheated and physically abused in Cass County, but neither federal troops nor an agent of the bureau was ever stationed in the county. Thus the county never experienced military occupation by a conquering army. Still, the county’s citizens felt the effects of Reconstruction because troops stationed at various times in Marion, Bowie, and Harrison counties occasionally passed through Cass County while chasing fugitives or traveling to their posts.”

“One other important industry in Cass County was the lumber industry. The abundant forests in the county initially provided wood for houses and fences for the county’s residents, but production gradually expanded to include the production of lumber and lumber products for export. By the 1940s Cass County lumbermills were producing 75 million board feet of lumber annually.”

“During the antebellum period, the primary major market and supply center had been the riverport and supply center, Jefferson. In 1873 the Texas and Pacific Railway was constructed through eastern Cass County, and the towns of Atlanta and Queen City grew up along that line. In 1876 the East Line and Red River was constructed through the southwestern corner of the county; its principal Cass County station was Hughes Springs.”

“The 1930s saw the birth of a new industry in the county, as the oil reserves beneath the surface were tapped, beginning with the exploration of the Rodessa oilfield south of Atlanta. By 1936 over 100 wells had been drilled. Although this activity brought a new town, McLeod, and prosperity to some landowners in the area of the oilfields, its impact on the economic base of the county is hard to measure.”

“The trend towards larger and fewer farms begun in the 1930s also continued. By 1982 only 894 farms were in operation in Cass County, and their average size had grown to 277 acres. The trend away from cotton continued and expanded to include all harvested crops. In 1930 the county’s farmers reported that they had harvested crops from over 206,000 acres of cropland in 1929. In 1982 the total cropland harvested was only 25,000 acres. Replaced by a wide variety of crops, the former mainstays of cotton and corn had been totally abandoned. The county’s farmers had turned to livestock, particularly beef and poultry, as their major source of income.”

“In 1982 many county residents worked at jobs beyond the county line, predominantly at Lone Star Steel in Morris County and Red River Arsenal and Lone Star Army Ammunition Plant in Bowie County. Of those who worked in Cass County, the largest numbers worked in manufacturing, trade, and local government. Income figures for 1981 indicated that Cass County was poorer than most Texas counties. With a per-capita income of $7,457 annually, it ranked 218th among the state’s 254 counties.”

The first Cass County courthouse was a wooden frame structure that was eventually sold to a church. In 1859, the county began work on a second building to be completed in 1861. Though it has seen its share of renovations and changes, this courthouse still stands. It is the oldest, continuously-used courthouse in the state of Texas. In this same category, it is the only antebellum design left standing as well. The photo above is the courthouse circa 1939.

“The Cass County Courthouse was designed by Judge Charles Ames in 1859 and was constructed of local brick made by J. Thomas Veal and L. W. Lisenbee, who were also the builders. The Civil War delayed the building’s completion until 1866. This 50-foot by 60-foot structure was two stories high with four brick chimneys. It featured a hipped metal roof painted a lead color and a square, 23-foot high cupola with a zinc covered dome, crowned with a spire and a wooden ball. Both the ball and spire were covered with gold leaf. The interior featured 12-foot high ceilings and tongue and grove flooring. The entire courthouse was painted ‘Spanish brown‘ inside and out. Around 1900, a 15-foot wing was added to the east side of the building by B. H. Singletary of Atlanta, Texas. In 1917, two more wings were added, one on the west side and another on the east side. The architect for this addition was Stewart Moore, form Texarkana, Texas, and the contractors were A. M. and R. G. Brashears, also from Texarkana. In 1933, a fire destroyed part of the second floor. The damage was repaired immediately; the tin covered cupola was removed, and the third floor was added. Sometime after the fire, stucco was applied over the brick and was painted white with deep tan trim. In 1979, a fourth addition of offices and an elevator were constructed on the west side of the courthouse. The existing three-story, Classical Revival style courthouse is the result of these renovations.” – National Register

This is how the courthouse looked from approximately 1979 to 2011, when the Texas Historical Commission began their restoration of the structure. That process would be completed in 2012. 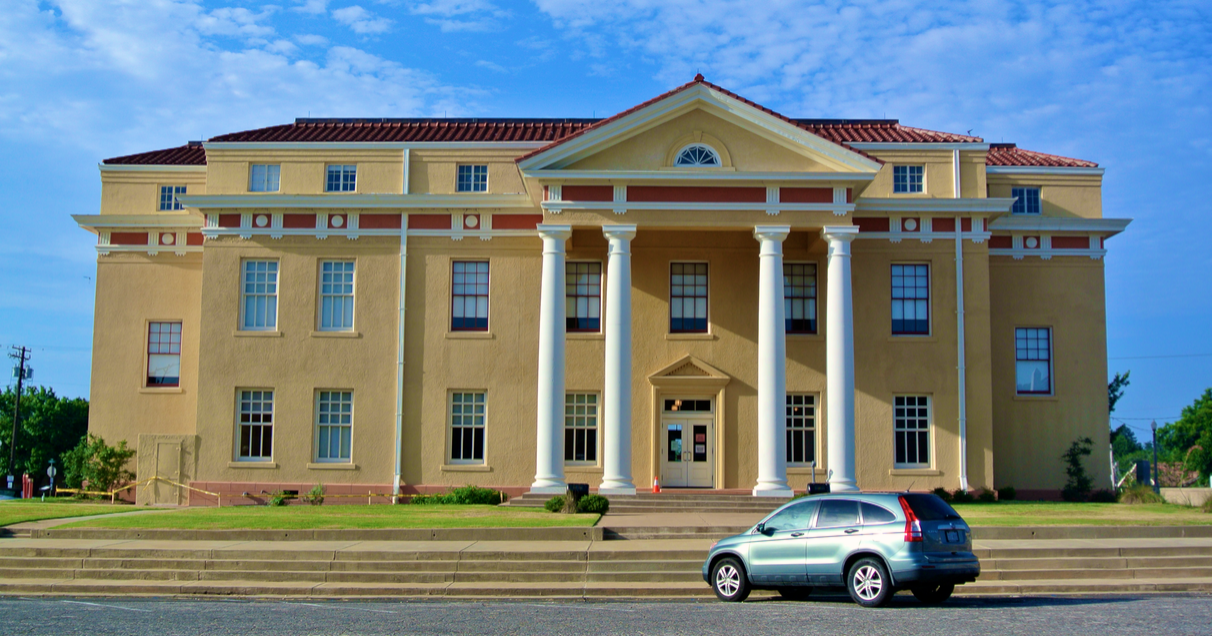 By 2014, it was clear to see that the restoration had returned the exterior’s “Spanish brown” paint. It looks good to me. 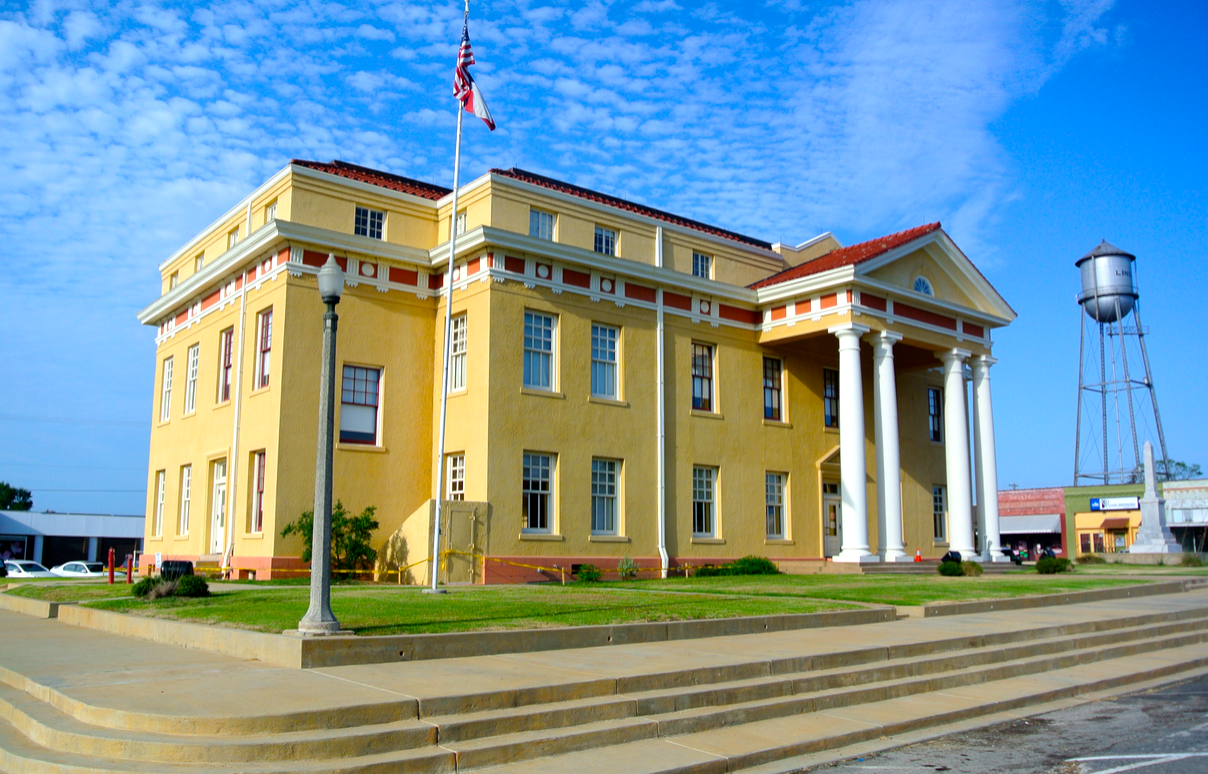 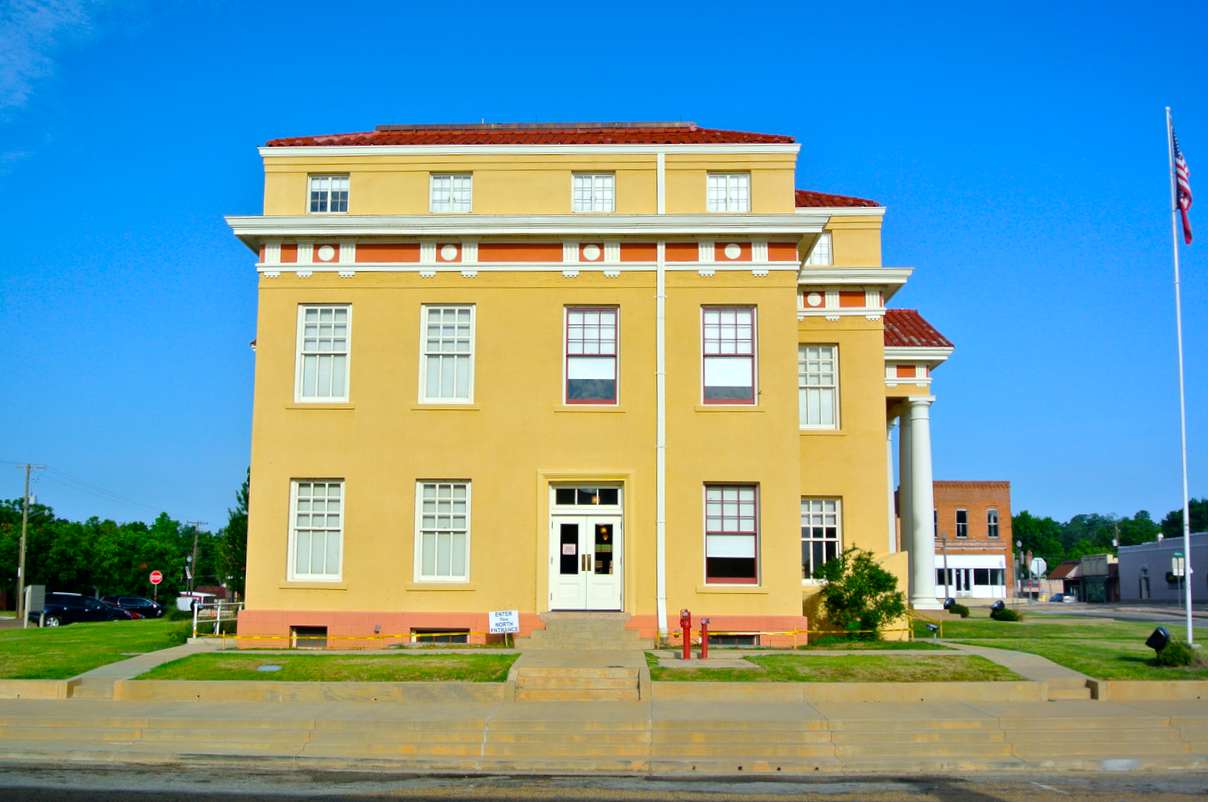 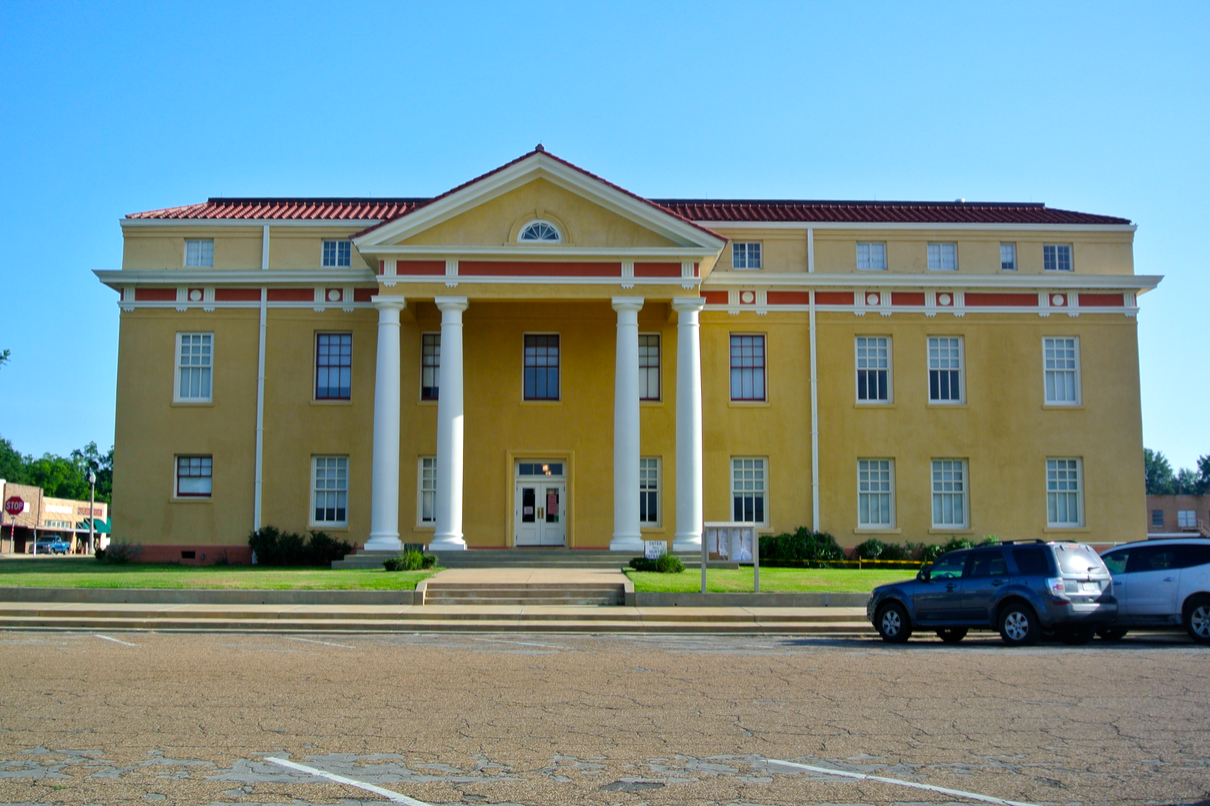 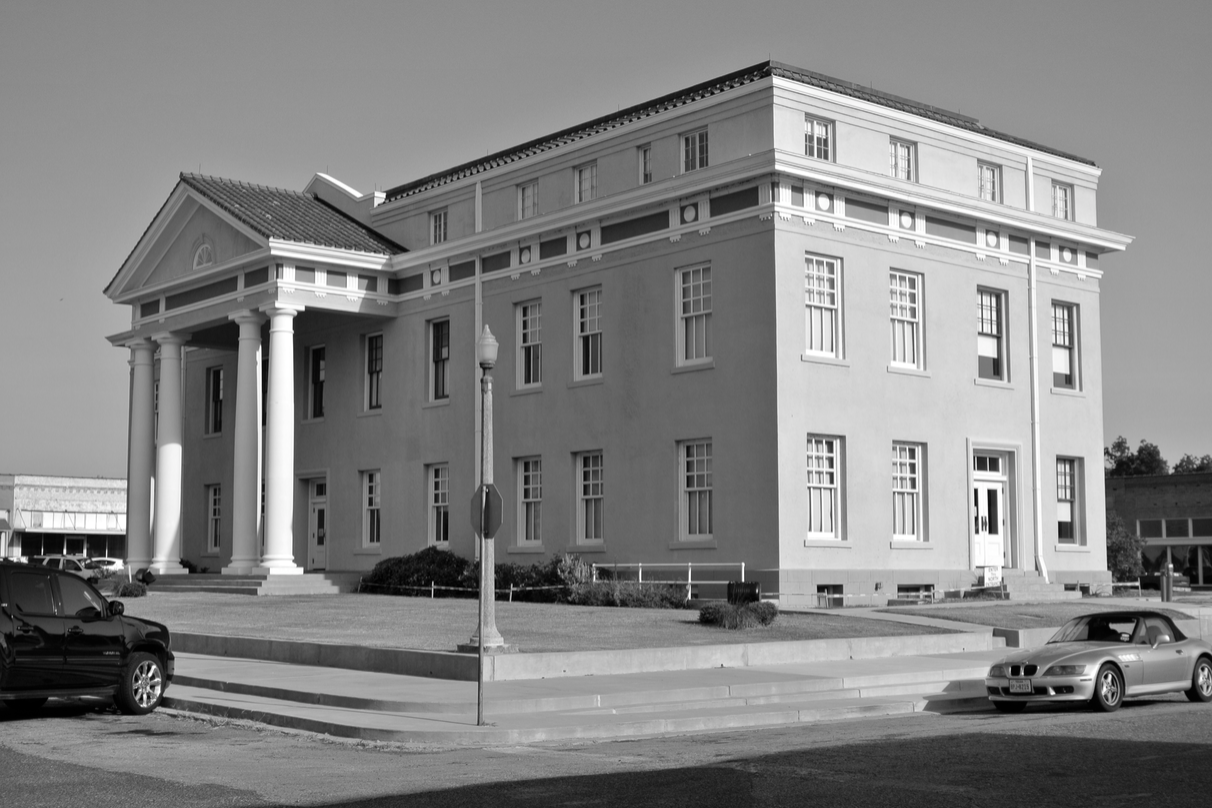 The western side, facing Main Street 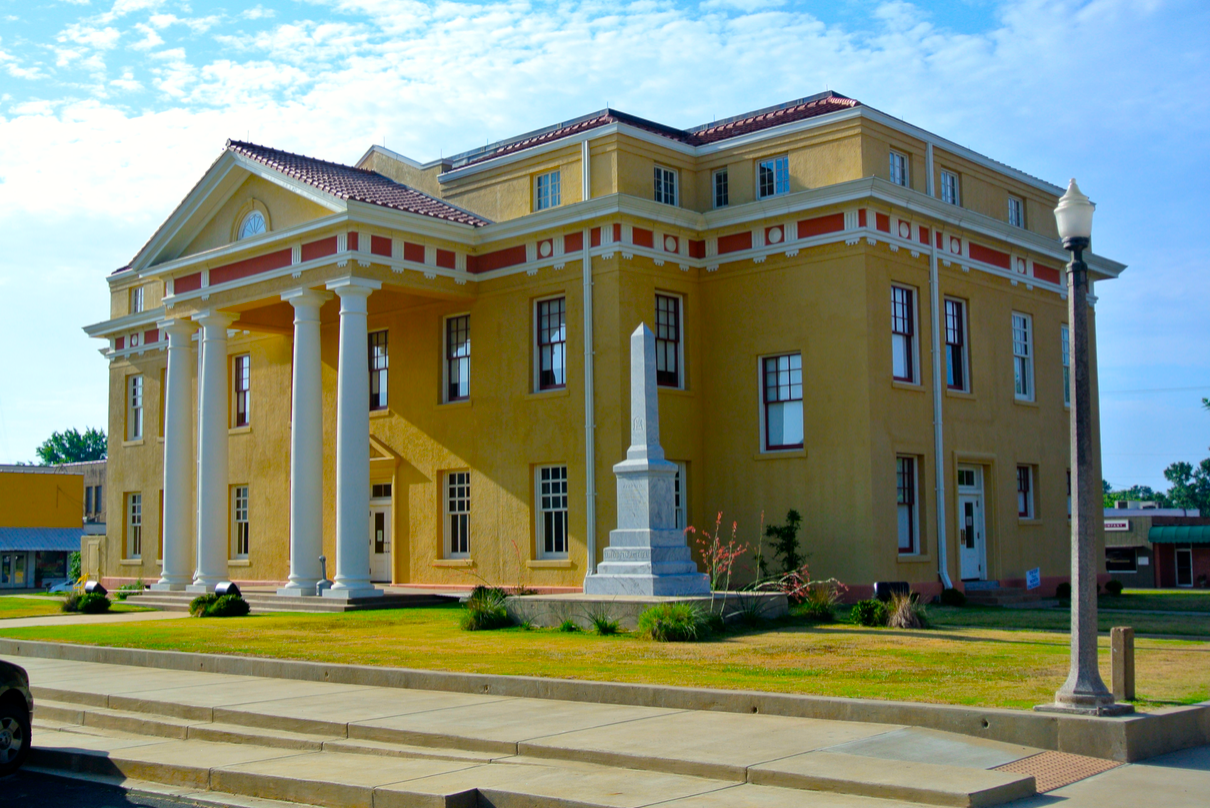 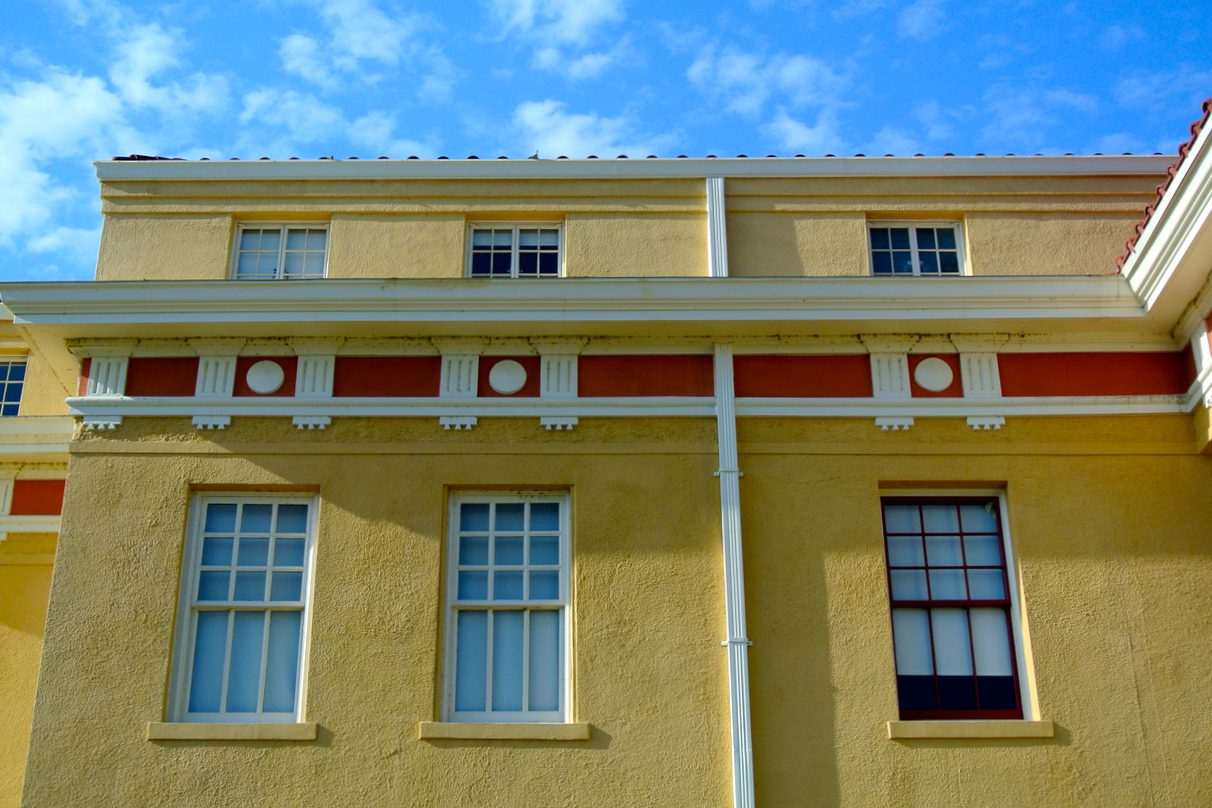 I love the restored ornamental trim. 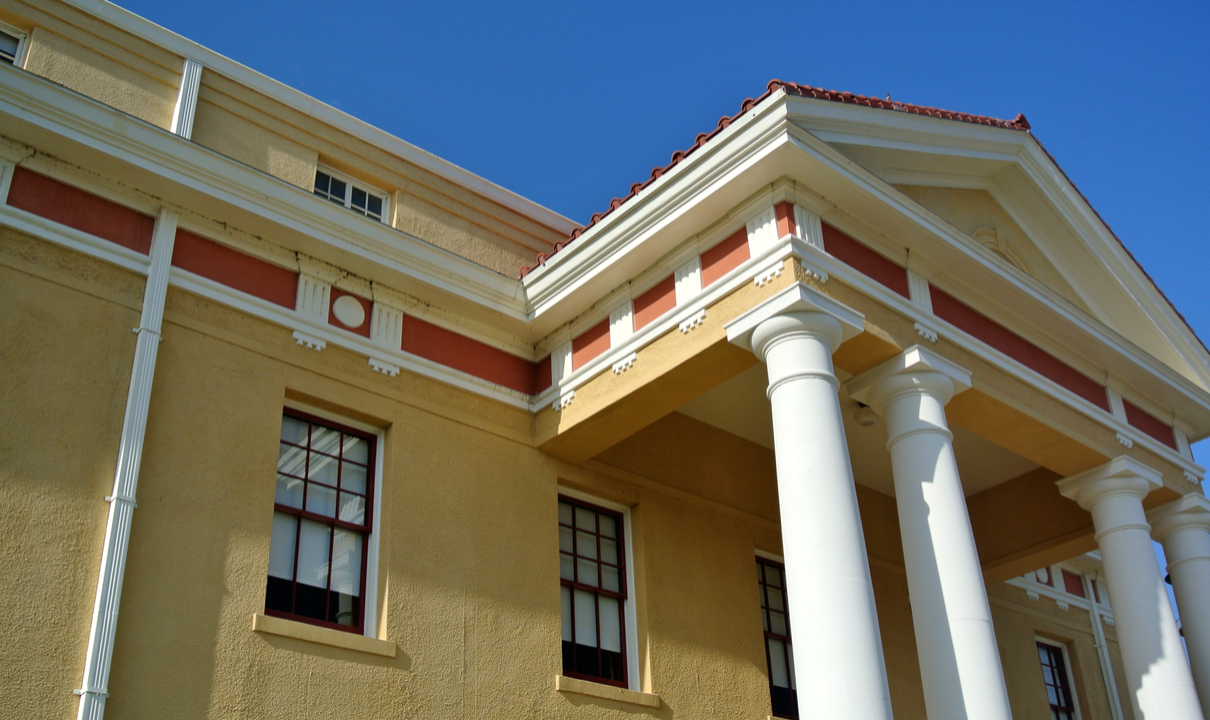 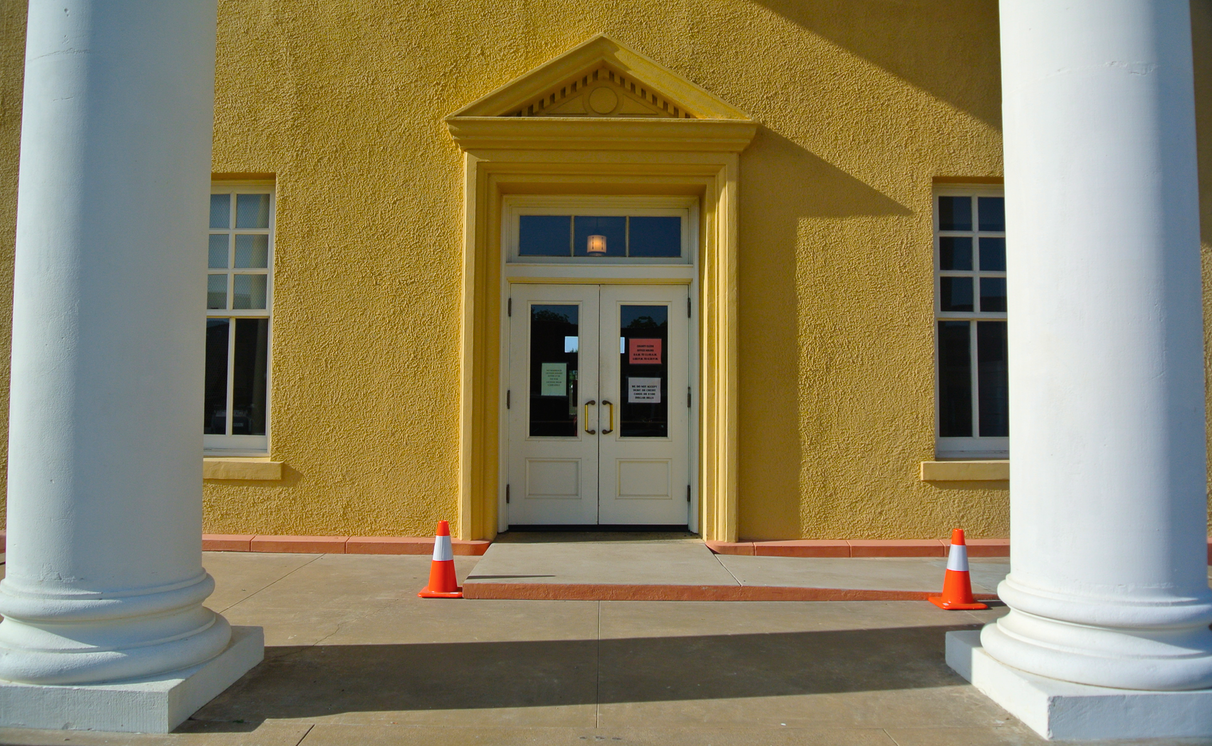 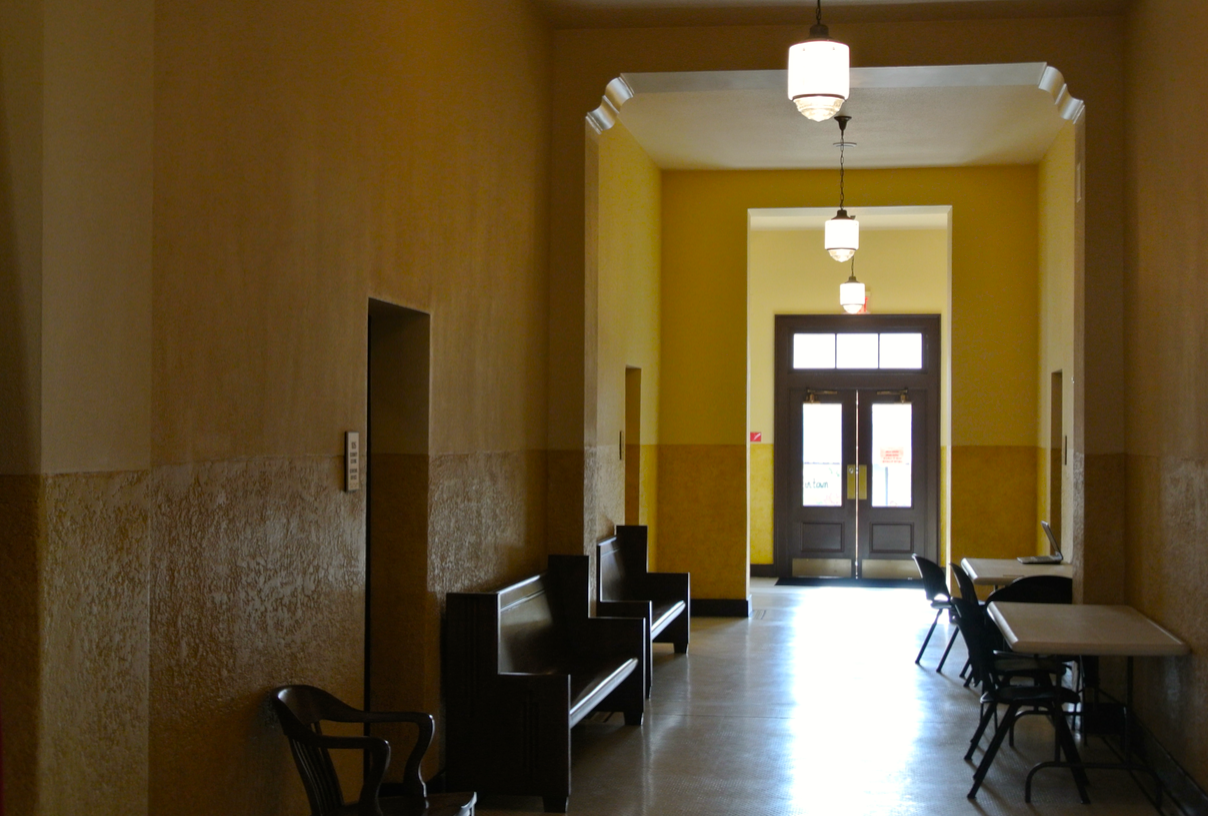 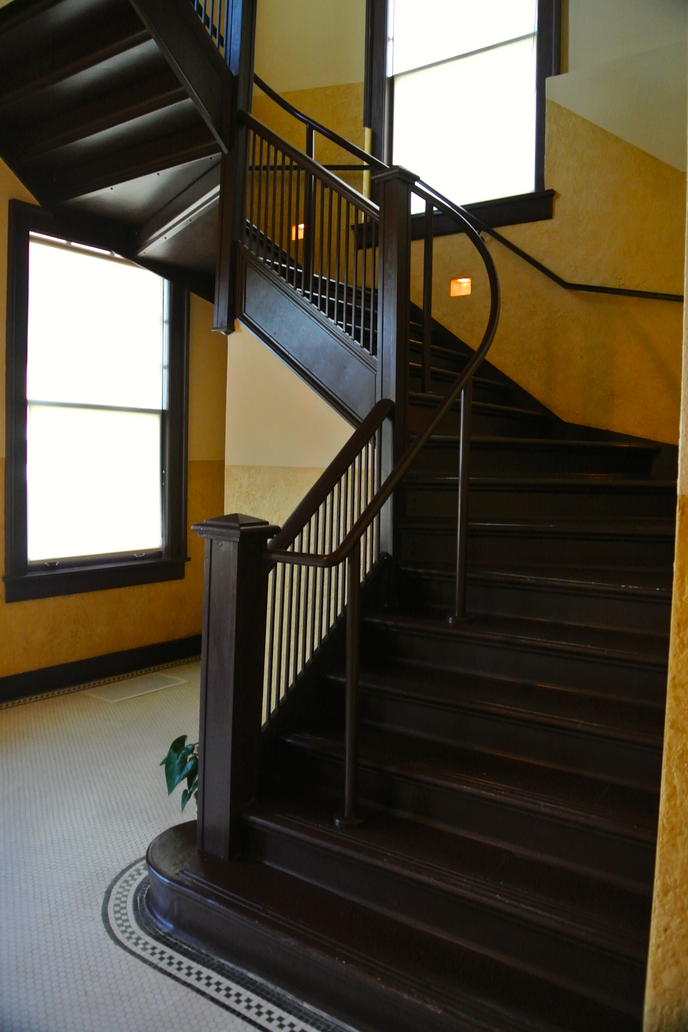 There’s a plaque inside that pays tribute to Bill Hines and Don Henley (of the Eagles), who are both past residents of Cass County contributors to the courthouse restoration effort. 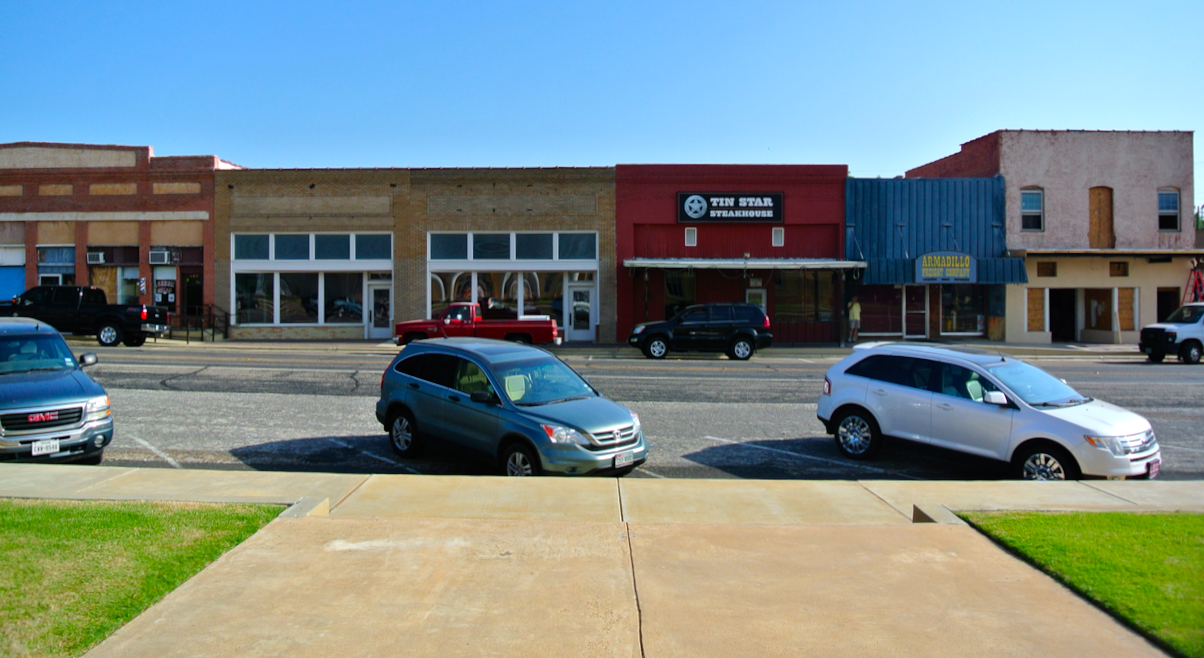 This is the view from the northern entrance, which looks out on to Houston Street / TX-11. 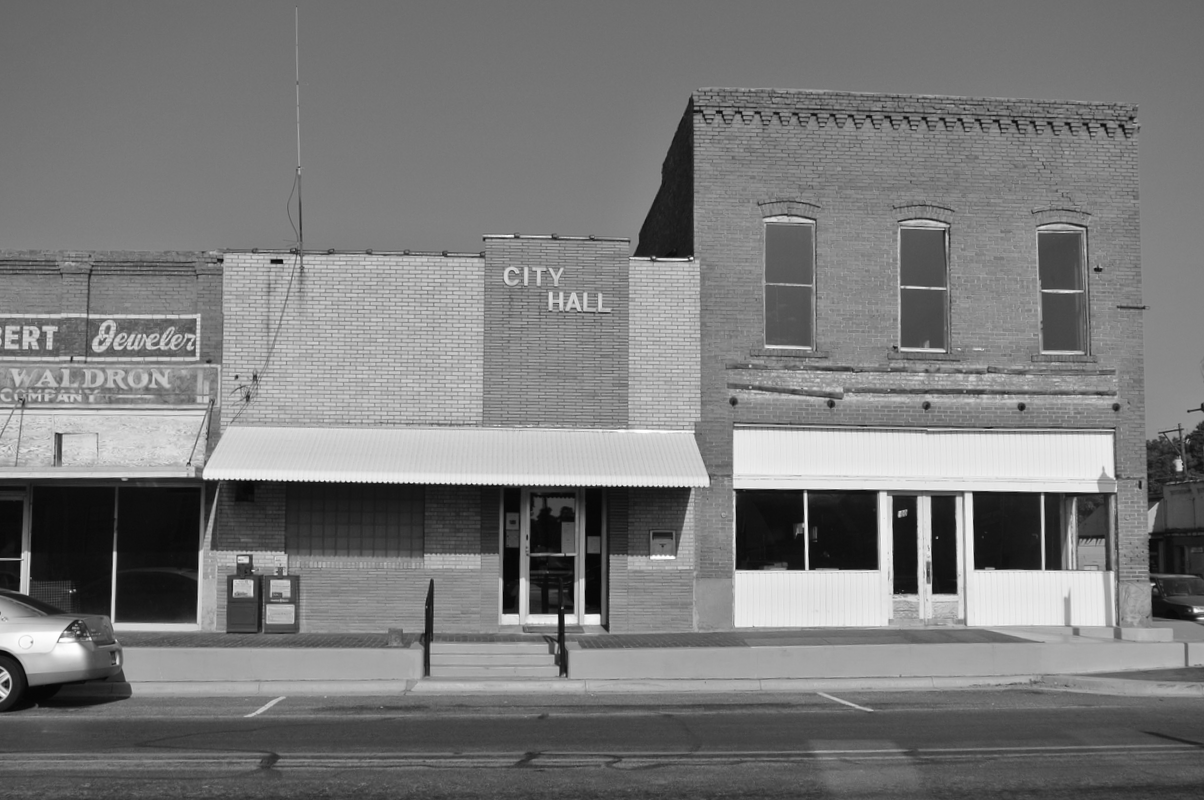 Linden City Hall is across Main Street from the western entrance.

A greater view of the shops along Main Street.

The “Cass County Office Building” is on the corner of Kaufman & Rush, on the eastern side of the square. 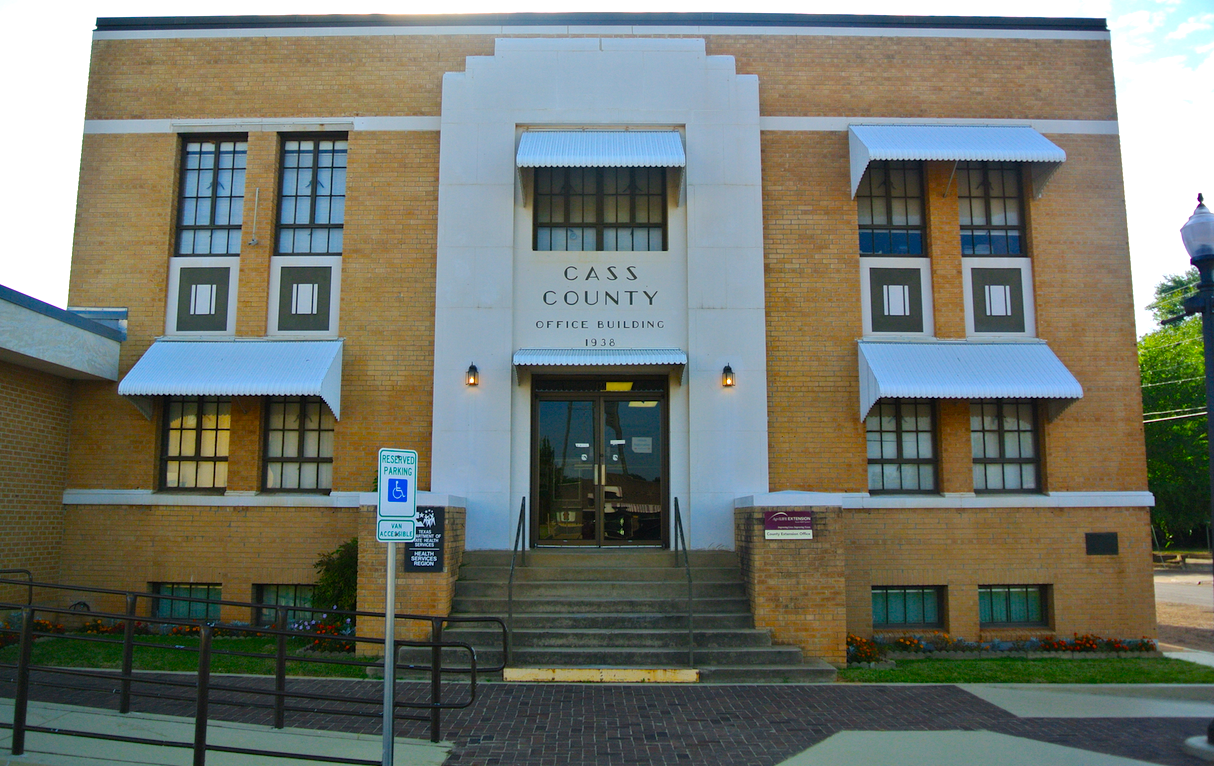 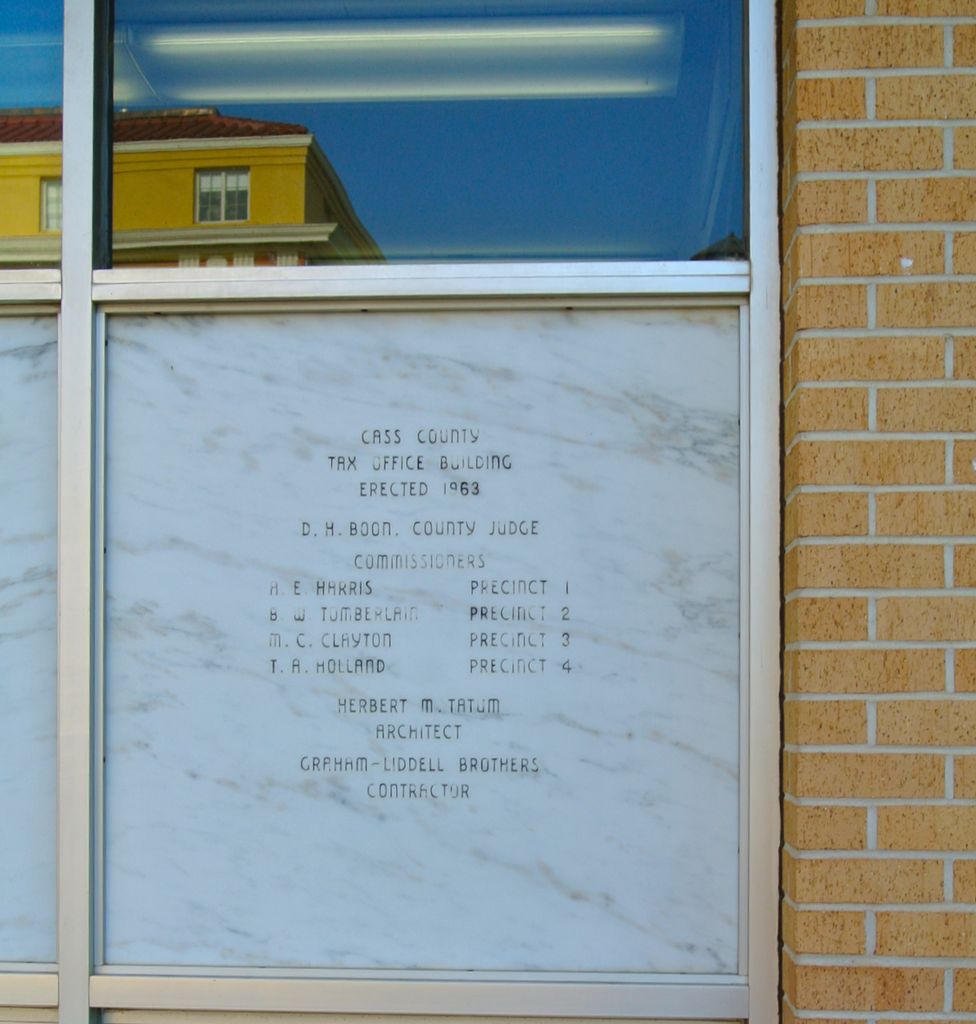 I found it interesting that the “cornerstone” for this building, was in fact part of the window. 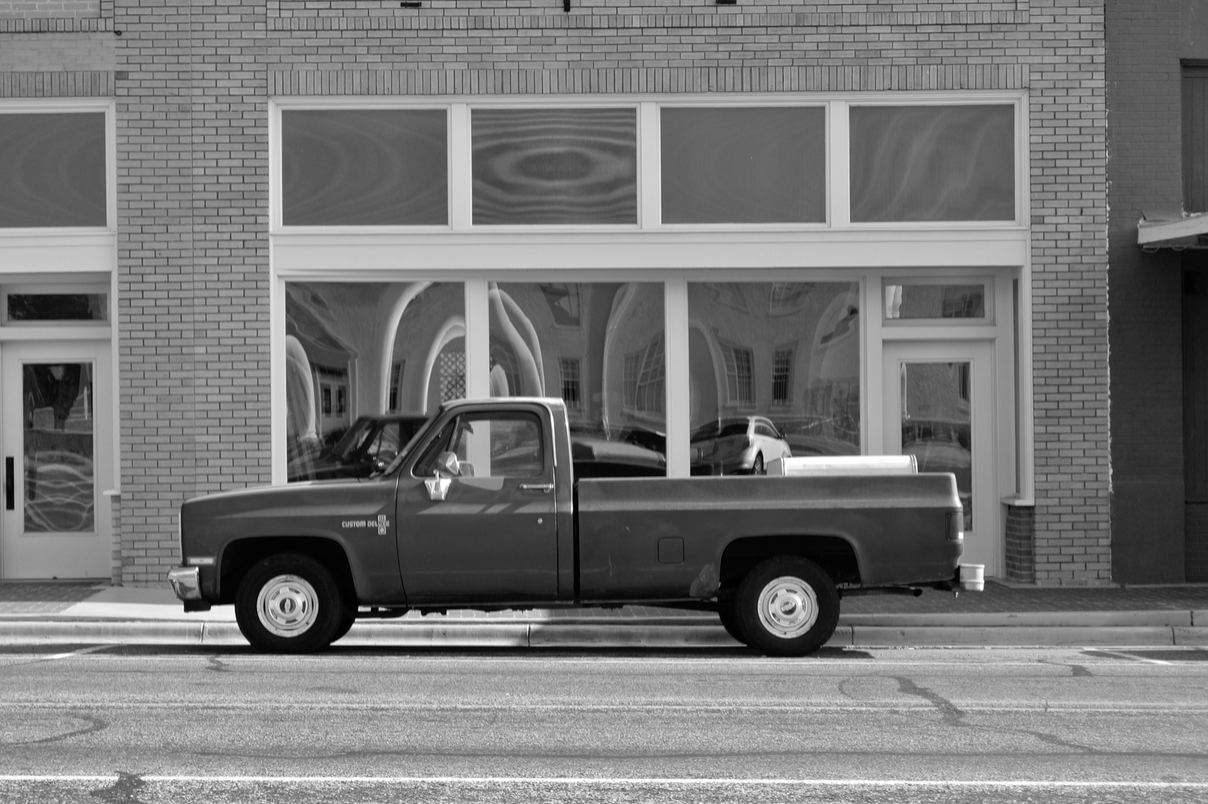 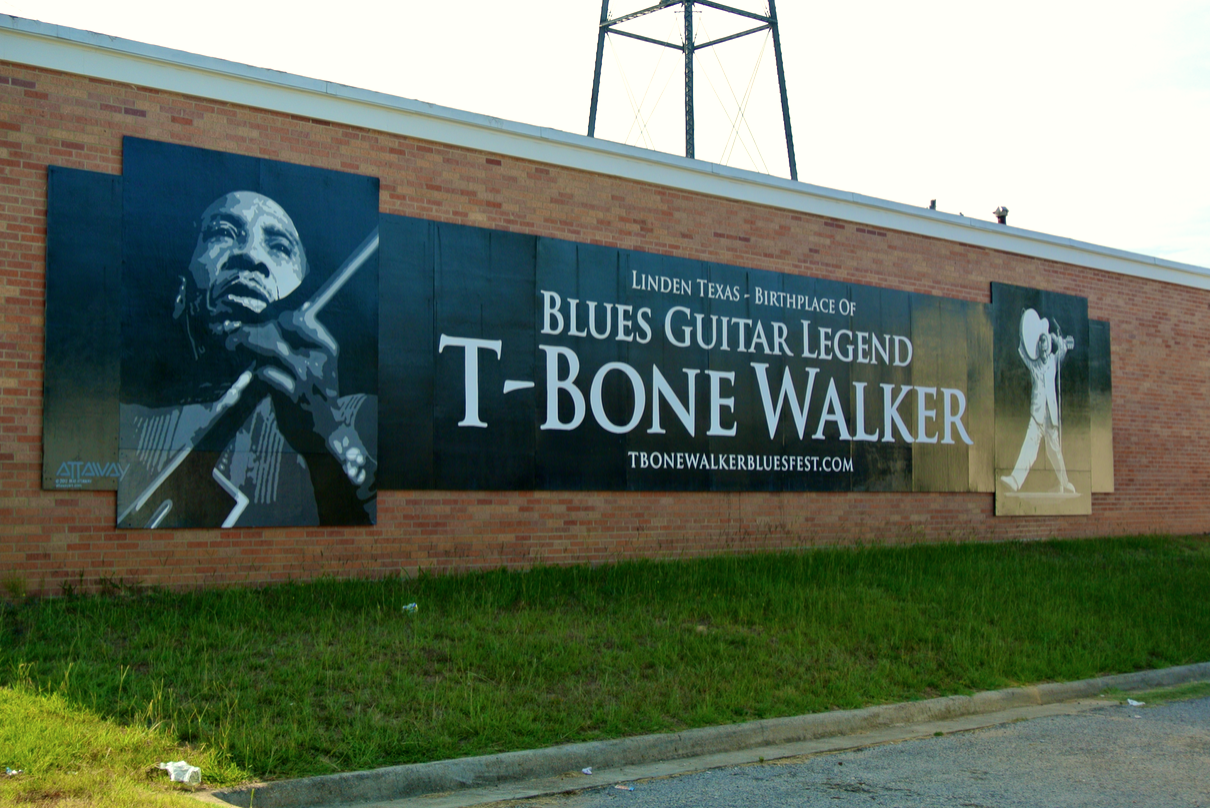