“The county is named for James Collinsworth, the first chief justice of the Republic of Texas, whose name was misspelled in the legislation that established the county. Collingsworth County occupies 894 square miles of rolling prairie and riverbreaks located to the east of the Texas High Plains. The county terrain is such that about half of its area is not suitable for farming. Therefore ranching remains strong in the county, balanced but not displaced by farms.”

“In 1876 the Texas legislature formed Collingsworth County of land previously assigned to Bexar and Young counties. Buffalo hunters who occupied the area during and just after the Indian wars slaughtered the great herds and opened the frontier for cattlemen. Ranchers first appeared within the borders of Collingsworth County during the late 1870s; the Rowe Brothers Ranch established its large holdings in southwestern Collingsworth county during 1878. In 1880 the United States census reported six people (three white and three black) living in Collingsworth County.”

“The severe drought of 1885–87 and the even more destructive blizzard of 1886 wiped out many large ranches, while changes in Texas land laws made it more difficult for ranchers to control state lands desired by settlers. As a result the large ranches began to break up in the late 1880s and early 1890s and smaller spreads were established by newcomers, some of whom began farming on a limited scale. In 1890 there were eighty-nine farms and ranches in the county, eighty-seven of them 500 acres or smaller.”

“Immigration and economic development led to the county’s political organization in 1890, when the growing population felt the need for local political control. In August of that year a petition of organization was circulated, and in September an election was held to choose county officers and a county seat. The site of a proposed town, Wellington, was elected over its competitors as the county seat. In 1891 the new city was platted, and the construction of a courthouse began.”

“Good wheat crops in 1889 and 1890 had indicated the land’s agricultural potential, and newly arriving farmers and stock farmers eagerly purchased lands in Collingsworth County. By 1900 there were 218 farms in the area encompassing 584,692 acres (with 21,494 acres classified as “improved”), and the population had increased to 1,233. In the first years of the twentieth century agricultural development accelerated, and by 1910 the county had developed a mixed ranching and farming economy based on small and medium-sized ranches and cotton, corn, milo, and wheat farms.”

“Following the Federal Highway Aid Act of 1916 and the establishment of the State Highway Commission in 1917, many Texas counties began to build auto routes. Collingsworth County began its first road projects in 1917 by building unpaved roads. By the mid-1920s, good roads linked Wellington to Childress, Shamrock, Clarendon, and Memphis, while lesser routes tied the outlying towns and ranches to the major road system.”

“By the late 1920s, all the land in the county suitable for farming was occupied, and in 1930 Collingsworth County maintained a mixed agricultural economy, with numerous cattle ranches and over 246,000 acres of farmland. Almost 26,400 cattle were counted in Collingsworth County that year, while local farmers planted corn, wheat, oats, alfalfa, milo, and, especially, cotton; about 162,000 acres was devoted to cotton production alone. In 1930 the census enumerated 2,112 farms and 14,461 residents in the county.”

“By 2000 peanuts had emerged as an important local crop, and the county was second in the state in acreage planted in peanuts that year. In 2004 some 113,900 acres were planted, of which almost 30,000 were irrigated, and cotton, peanuts, and wheat were the primary crops. That same year the county reported 32,000 head of cattle. In 2000 county communities included Dodson (115), Samnorwood (39), and Quail (33). The bulk of the county’s population, 2,275 inhabitants, resided in Wellington, the county seat.”

I was the guest of Wellington and Collingsworth County on May 31, 2014. 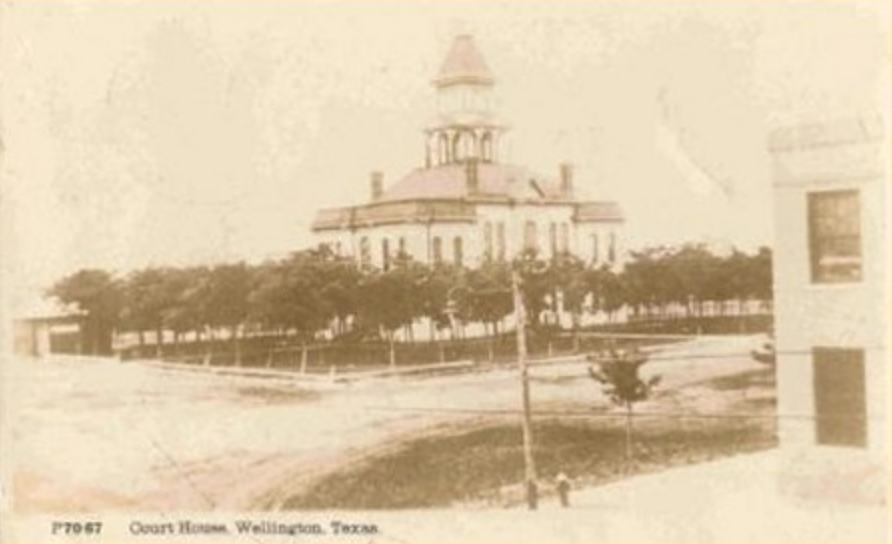 J.A. White was the architect selected to design a courthouse for the Wellington square and after completing his plans, he handed the commissioners a price tag of $31,000. This number was troublesome to county citizens, who naturally made quite a bit of noise in opposition to its construction. The process, meanwhile, went through nonetheless.

At the beginning of the 1930s, the courthouse was demolished in favor of a more modern building. 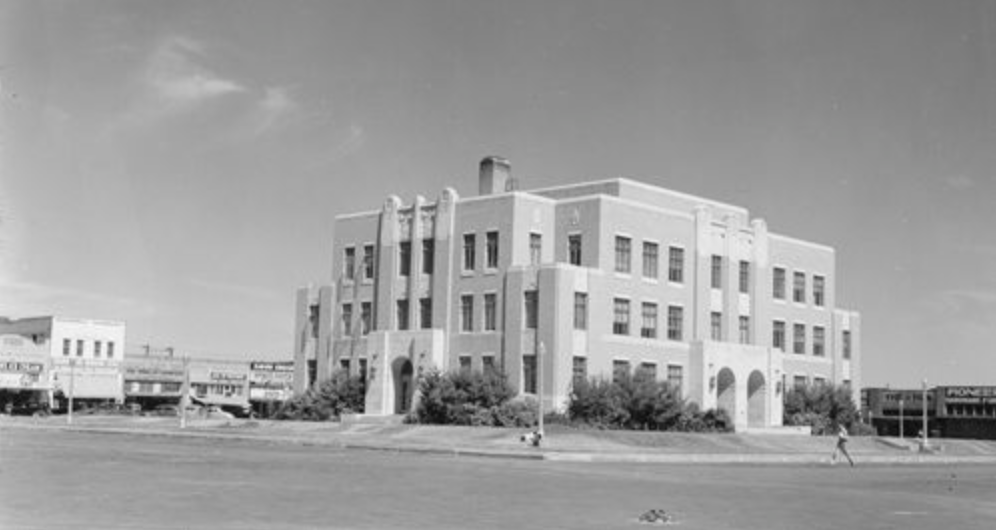 This four-story, brick and stone, Art Deco courthouse was designed by Berry & Hatch, while contracting work was provided by the Christy-Dolph Construction Co. Relief detailing, ornamental friezes, and chevron-patterned string courses all point to the stylistic influences on this impressive, Moderne building. Its sister complement stands in Dumas and was designed by the same firm.

Entering Collingsworth County from the north via Highway 83 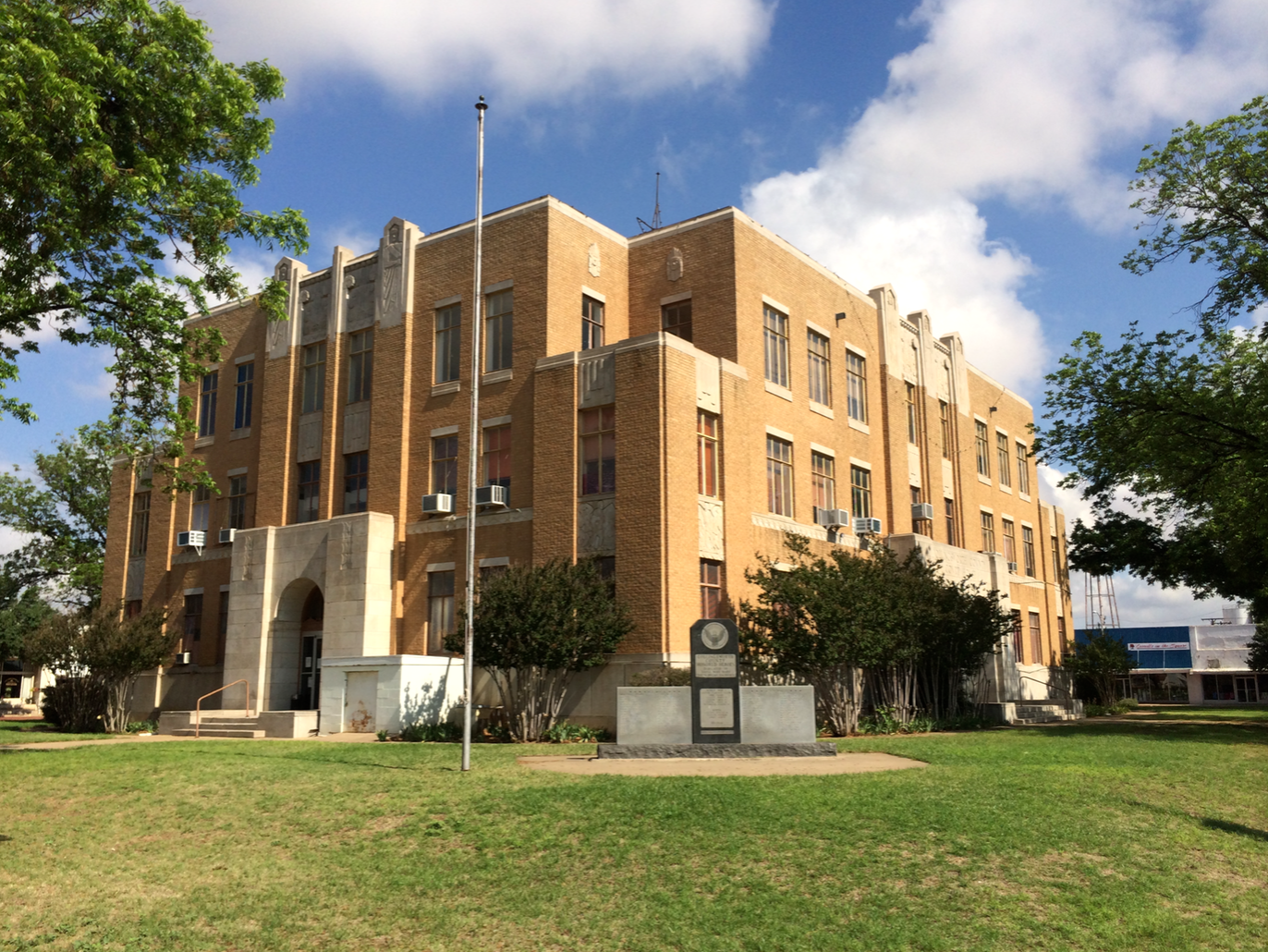 The eastern façade, on East Avenue

Wellington was once a part of the Ozark Trail, which you can read about: here. This is the northeast corner. 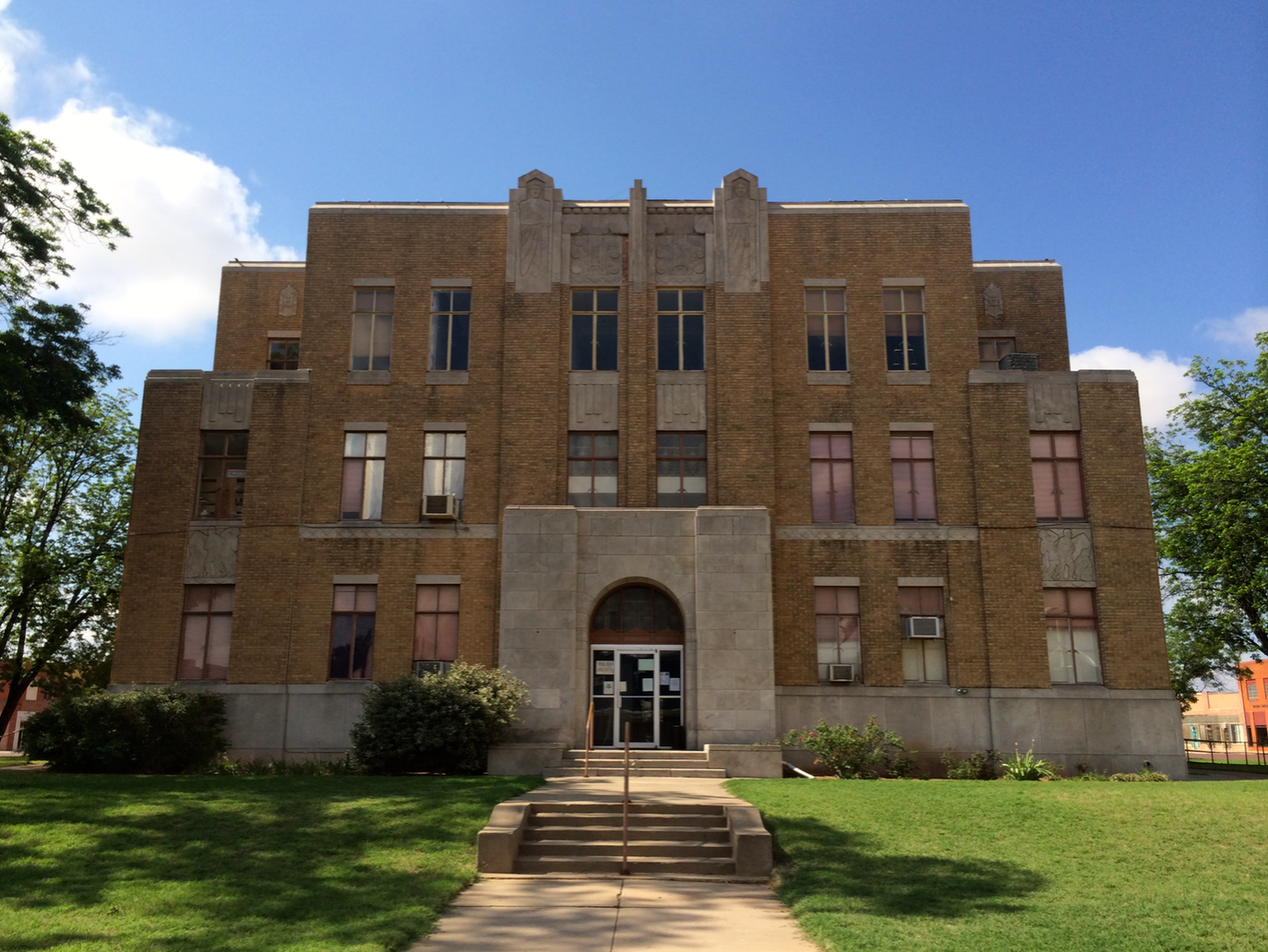 The northern façade, on 8th Street 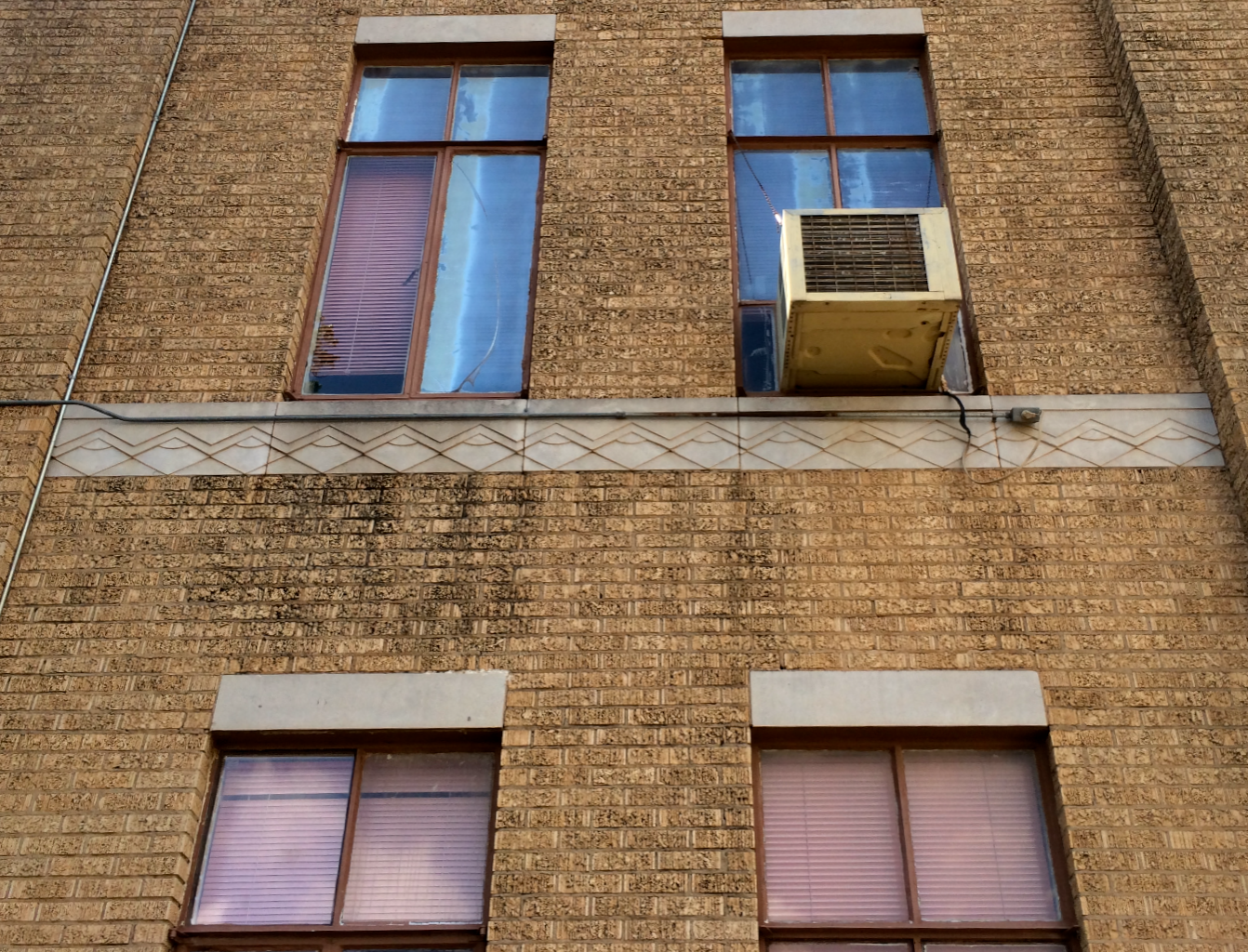 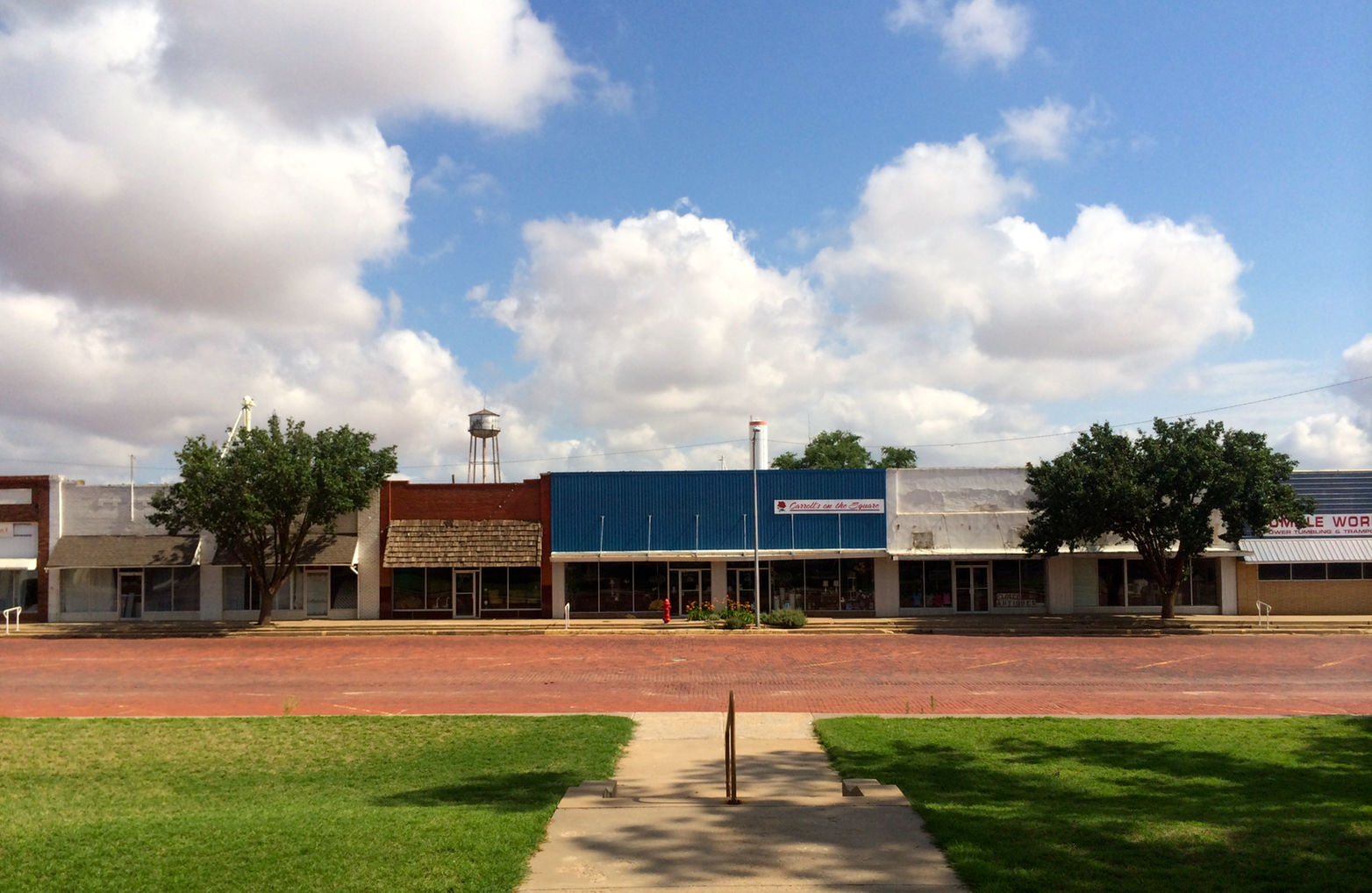 8th Street, as seen from the northern doors 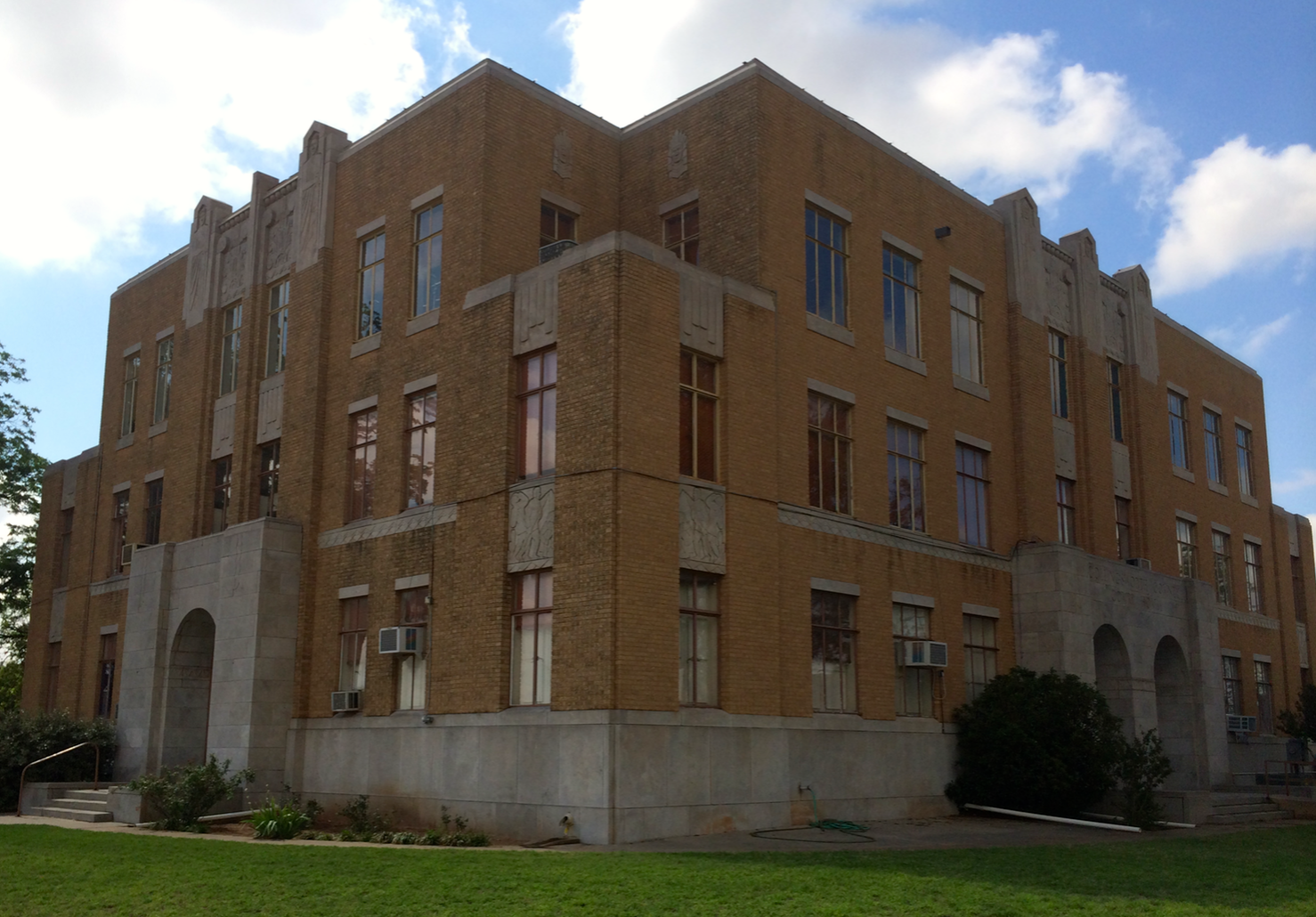 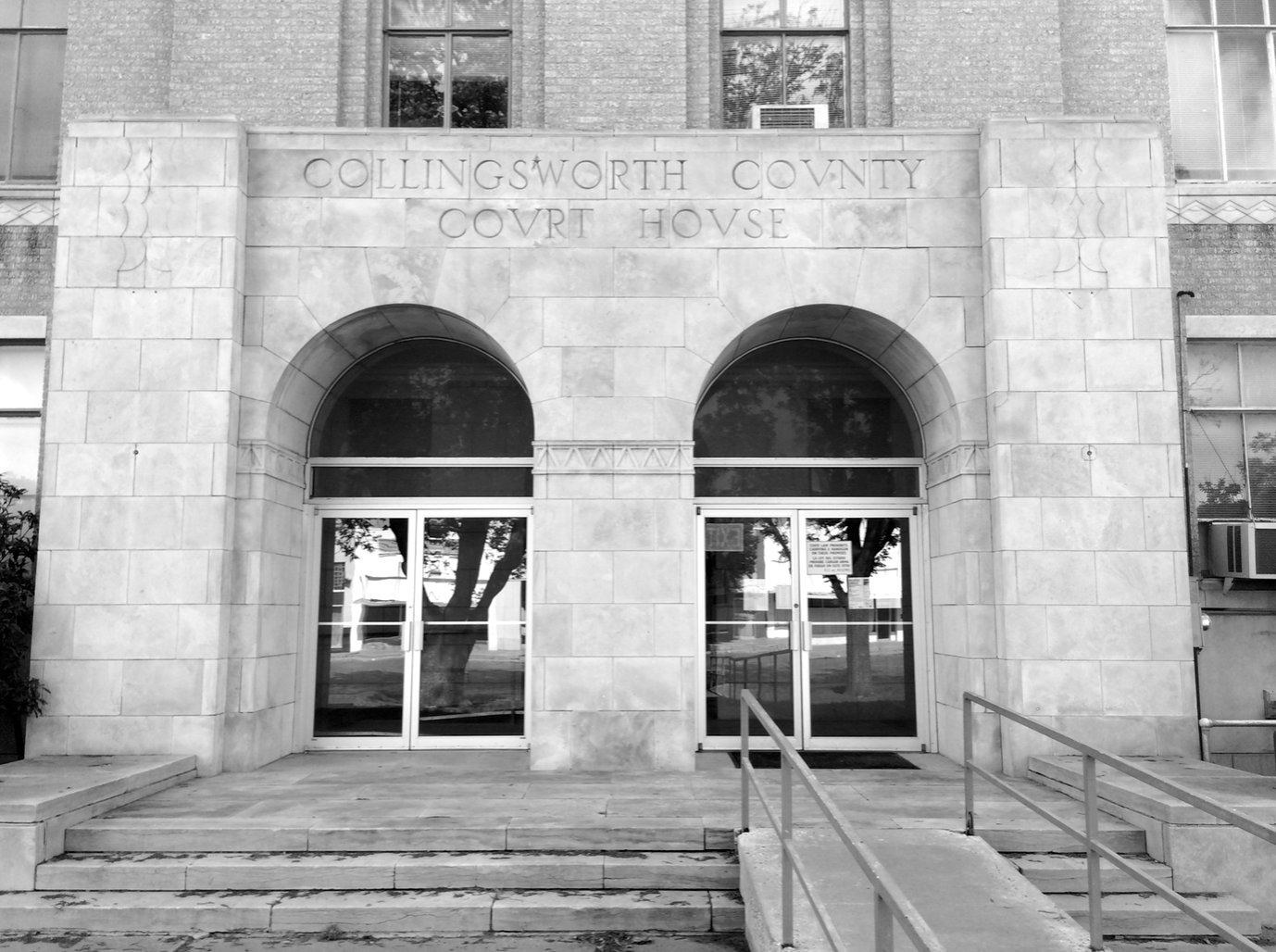 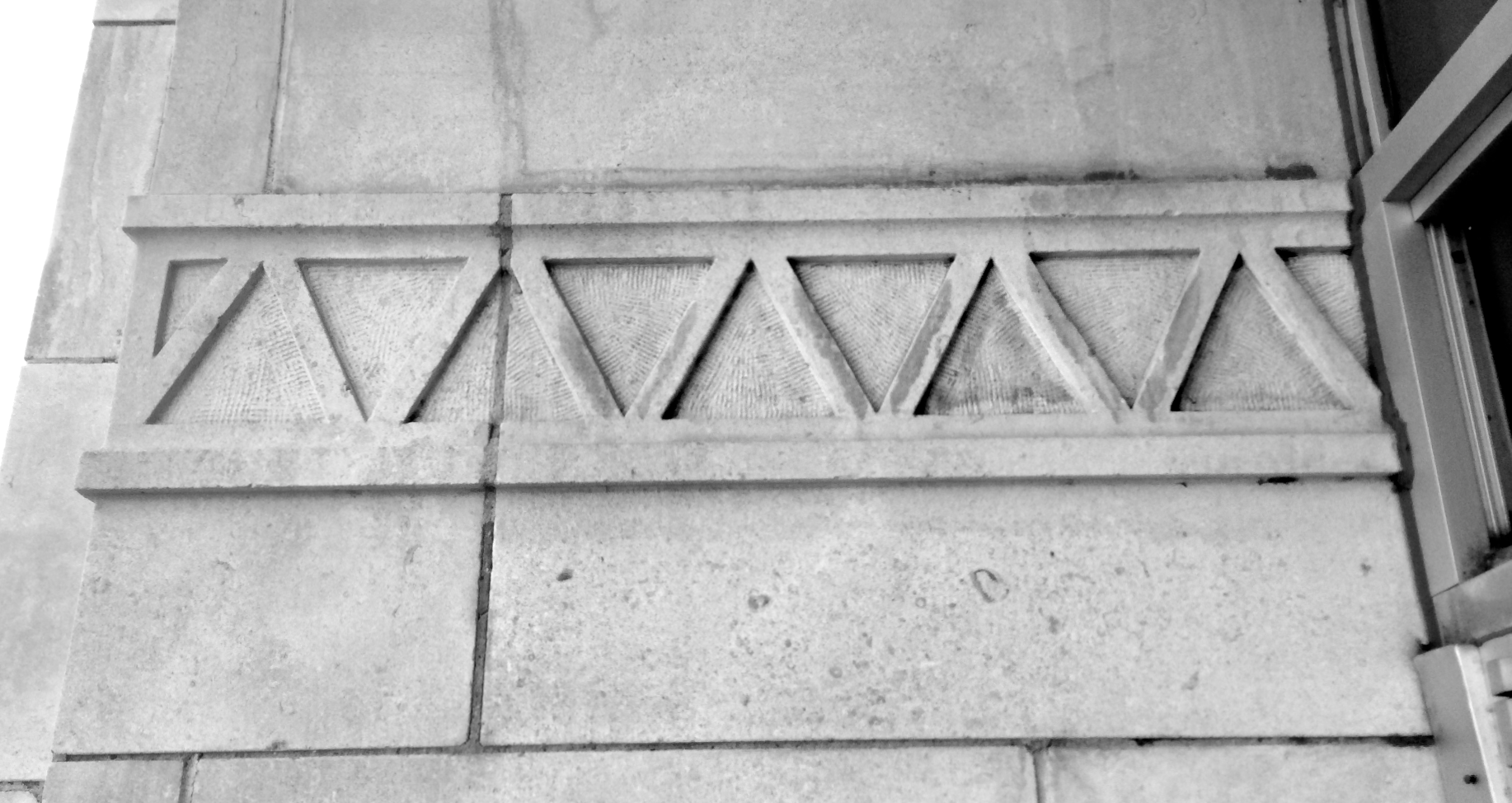 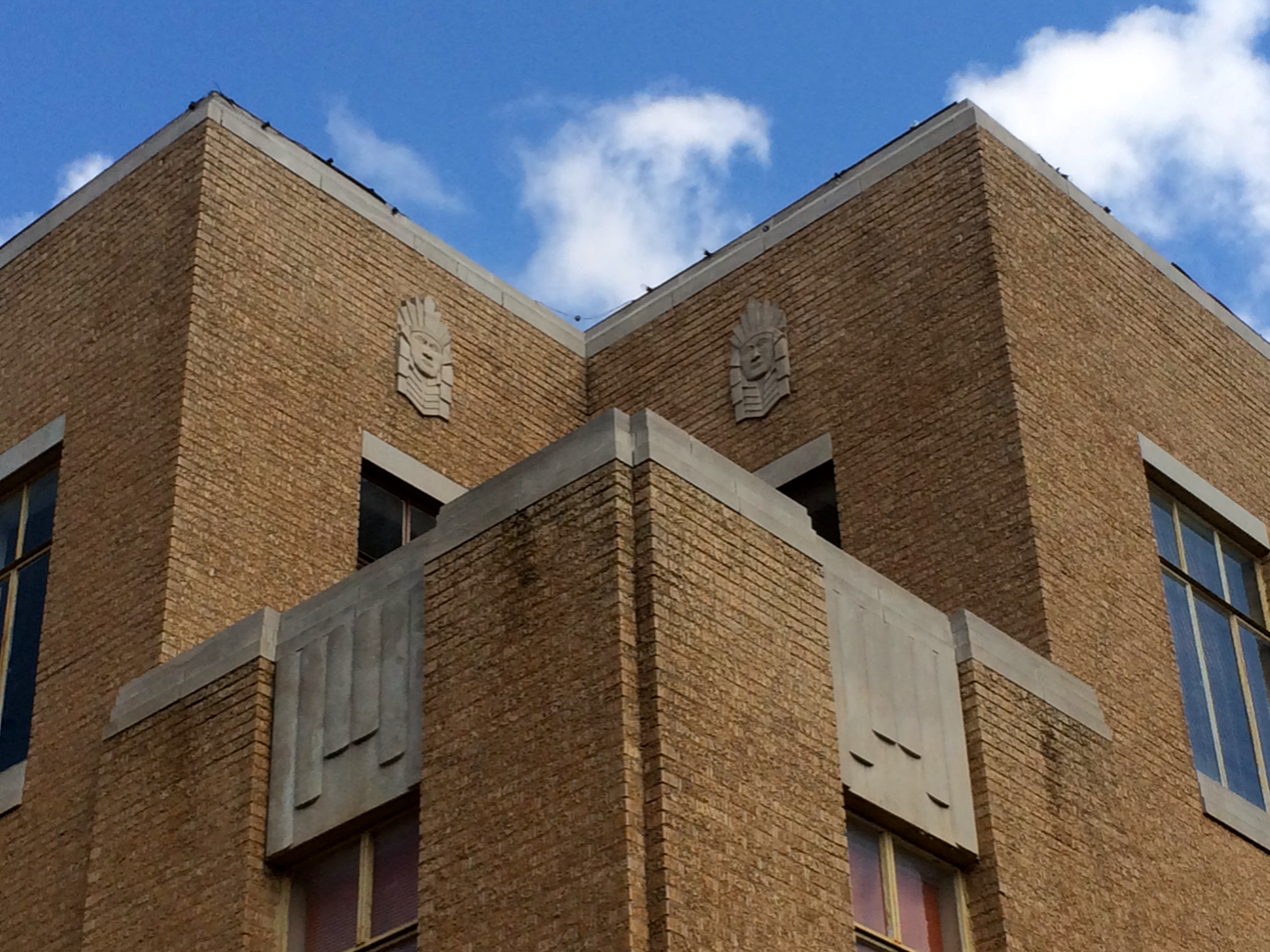 West Avenue, as seen from the western doors 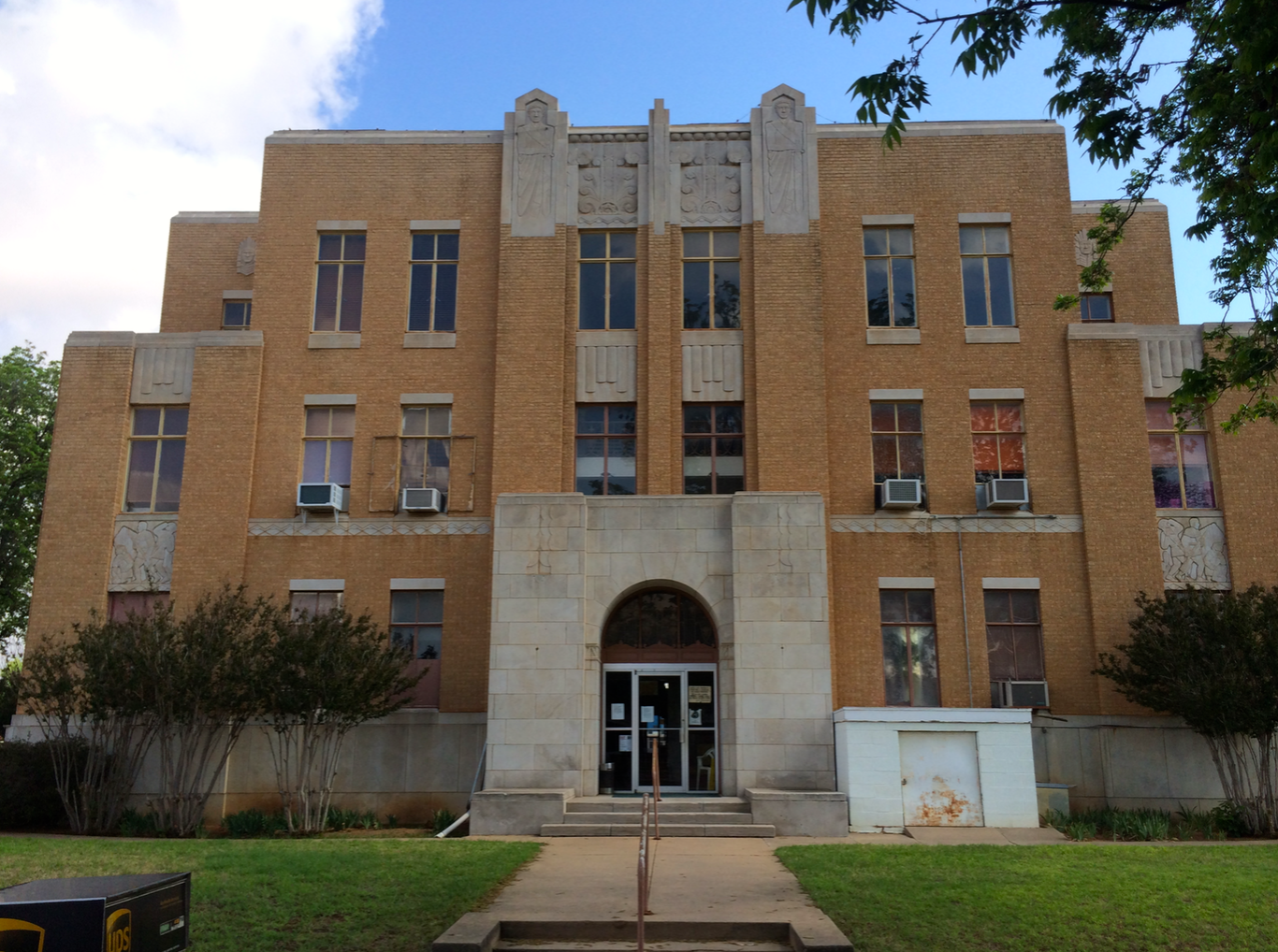 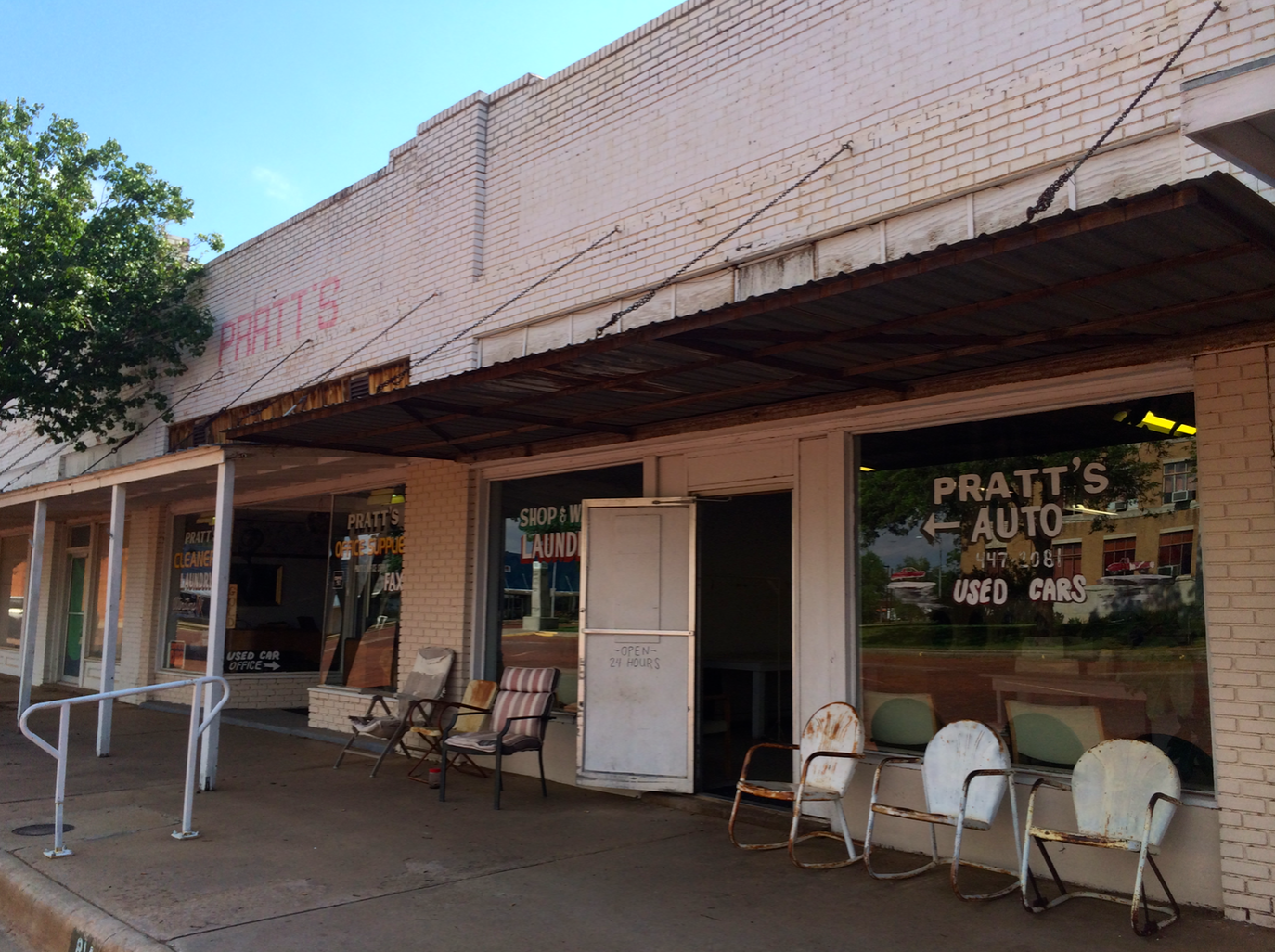 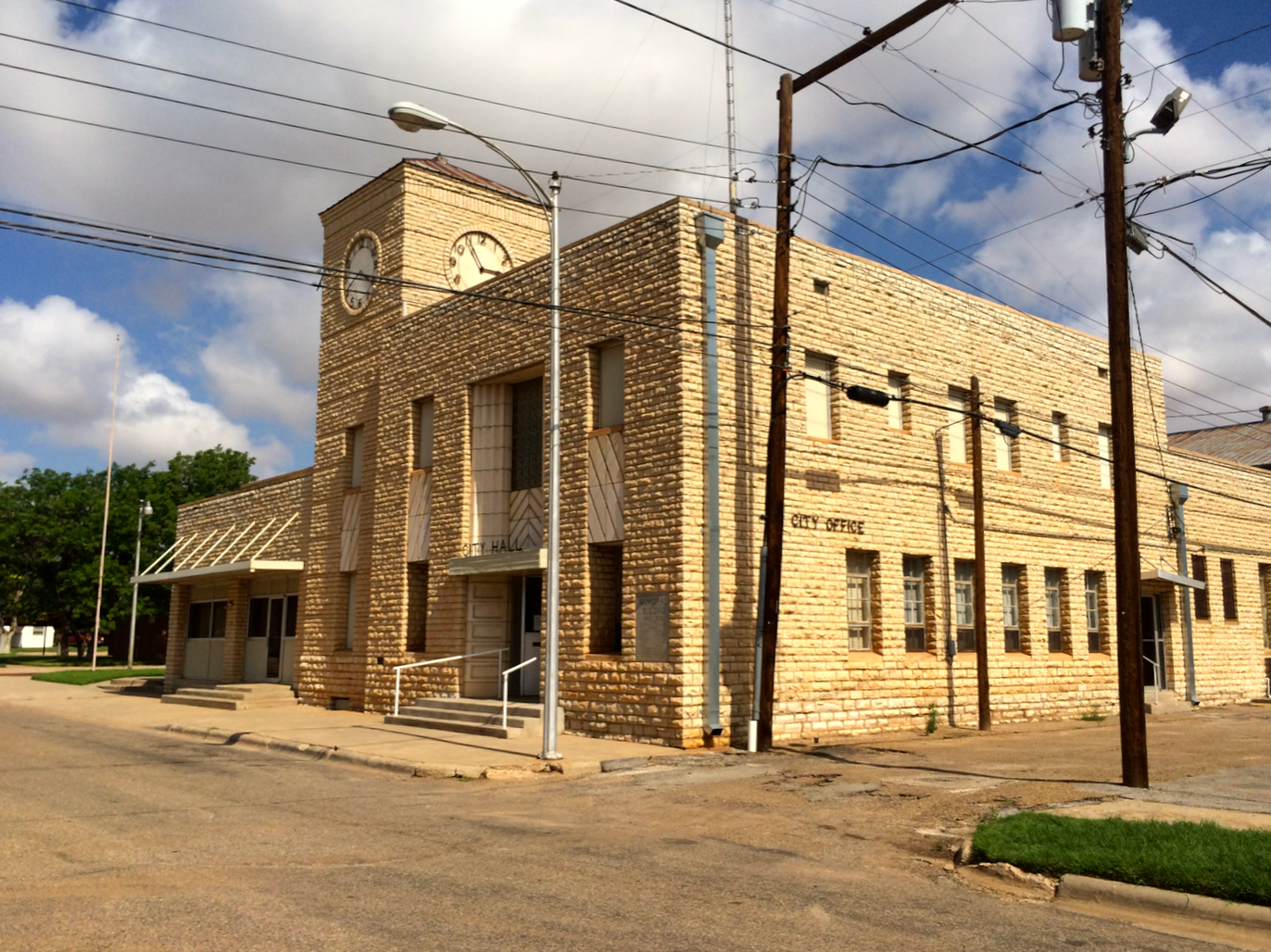 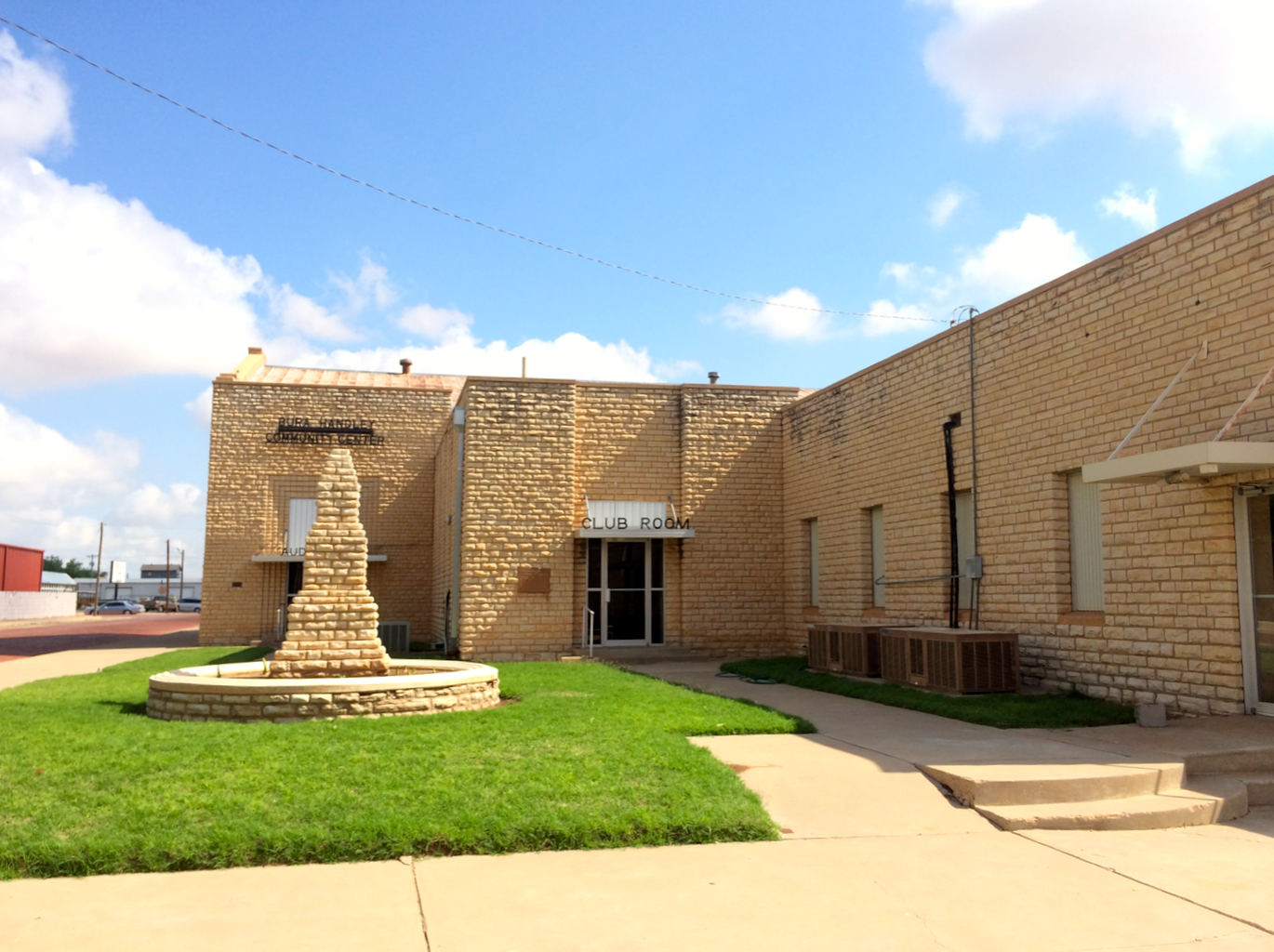 It also functions as a community center, with a particularly interesting fountain.