“The area was named for Royal T. Wheeler, the second chief justice of the Texas Supreme Court. Wheeler County occupies 914 square miles of rolling prairies and rough river breaks in the area east of the High Plains; elevations range from 2,000 to 2,800 feet above sea level.”

“Buffalo hunters had begun moving into the area before the Indians were removed. In the spring of 1874 they established a crude outpost, called Hidetown or Sweetwater, on Sweetwater Creek, in the northwestern part of what is now Wheeler County. To curb Indian escapes from Indian Territory, in June 1875 the United States Army established a post near Hidetown. It was named Fort Elliott in 1876 and remained operative until 1890, providing both protection and economic benefits for newly arrived residents. In 1878 the first post office in the Panhandle was established there.” 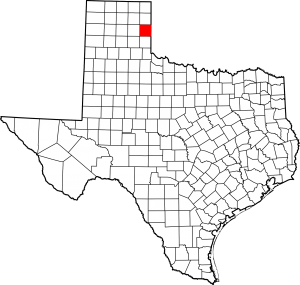 “As the Indian threat diminished in 1875 and 1876, settlers began to congregate around Fort Elliott and Hidetown, and in 1876 the Texas state legislature established Wheeler County from lands formerly assigned to the Bexar and Young districts. As the buffalo were hunted out of existence, cattle ranching began to develop in the area, and former buffalo hunters, discharged soldiers, and newly arriving ranchers settled into the county. In 1879 the local residents petitioned for county organization. On April 12, 1879, Wheeler County became the first organized county in the Panhandle, with fourteen other unorganized counties attached to it. The small camp of Sweetwater was chosen to be the county seat; the settlement was renamed Mobeetie in 1880, when a post office was established there.”

“Throughout the second half of the 1870s and during the 1880s and 1890s, ranching and Fort Elliott dominated the local economy. In 1890, when the United States agricultural census counted forty-six ranches or farms in the county, almost 9,300 cattle and 1,700 sheep were reported, but only 400 acres were planted in corn, the county’s most important crop at that time.”

“The ranching industry began to give way to farming around 1900, as a rush for school lands, beginning in 1898 and 1899, led to a substantial increase in cultivation between 1900 and 1910. Railroad construction during this period encouraged immigration and linked the area to national markets. The Santa Fe Railroad, building into the Panhandle in 1887, had missed Mobeetie by twenty miles, but in 1902 the Rock Island built westward across the Panhandle from Oklahoma to Amarillo, and along it several townsites were developed: Crossroads, Lela, Shamrock, Norrick, and Benonine.”

“Meanwhile, ranching remained important to the economy, and 32,000 cattle were reported that year. Wheeler County’s population rose rapidly during this period, and by 1910 there were 5,258 people living in the area. The evolution of the economy also contributed to the county’s government being moved in 1907 from Mobeetie to Wheeler, which was located closer to the center of the county. Cultivation continued to expand between 1910 and 1930, and cotton became the county’s most important crop.”

“The first producing oil well was drilled in 1924, and by the end of the 1920s the entire southwestern part of the county was honeycombed with oil and gas wells, tank batteries, and pipelines. Magic City and Kellerville developed as small oil centers. Oil and gas discoveries also led to more railroad construction. The Santa Fe extended a line from Clinton, Oklahoma, to Pampa in 1929, crossing the northern part of Wheeler County. Townsites on this line included Allison, Zybach, Briscoe, and New Mobeetie (two miles north of Old Mobeetie).”

“Wheeler County’s agricultural progress was reversed during the Great Depression of the 1930s. Low prices, federal crop restrictions, and other factors combined to drive thousands of acres out of production. Cropland harvested declined from 185,000 in 1930 to 167,000 acres in 1949; cotton acreage fell by more than 50 percent during this period, and by 1940 only 42,000 acres were planted in the fiber. Hundreds of farmers were forced off the land: by 1940 only 1,266 farms remained.”

“By the 1980s the bulk of the county’s population lived in the urban areas and commuted to oil and gas, farming, or ranching jobs. The remainder lived in smaller towns and on isolated farms and ranches in the rural areas. In 1982 about 95 percent of the land was in farms and ranches; 26 percent of the farmland was cultivated, and 7 percent was irrigated. About 73 percent of the county’s agricultural receipts was derived from livestock, particularly cattle and hogs. That year the county ranked first in the state for the production of rye, wheat, sorghum, hay, and cotton.”

“[In 2000,] Wheeler (population, 1,750), the county seat, served as a petroleum center and had large feedlots and a slaughtering plant. Other communities included Shamrock (2,087), Mobeetie (112), Allison (135), and Briscoe (135). Wheeler is home to the Wheeler County Historical Museum. The Pioneer West Museum is in Shamrock, which also holds a St. Patrick’s Day Celebration each March.” 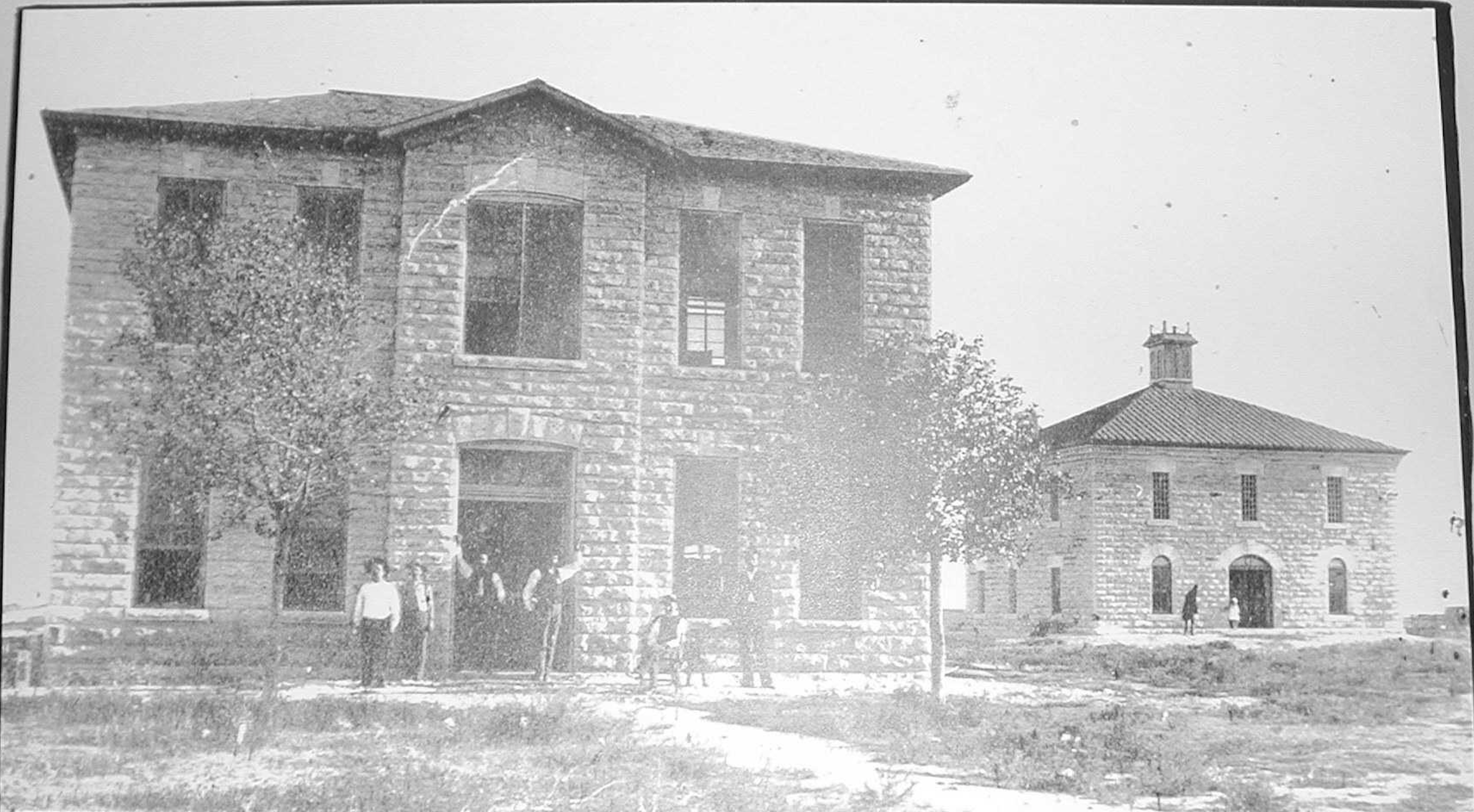 This Italianate building was constructed by a team of Irish workers that followed the plans of an unknown architect. Local stone was taken from the homestead of Mr. Emanuel Dubbs, who lived nine miles west of Mobeetie (the original county seat). In 1888, the structure was condemned following the discovery of a lack of reinforcement pins in the walls and a new courthouse was quickly put into the works. 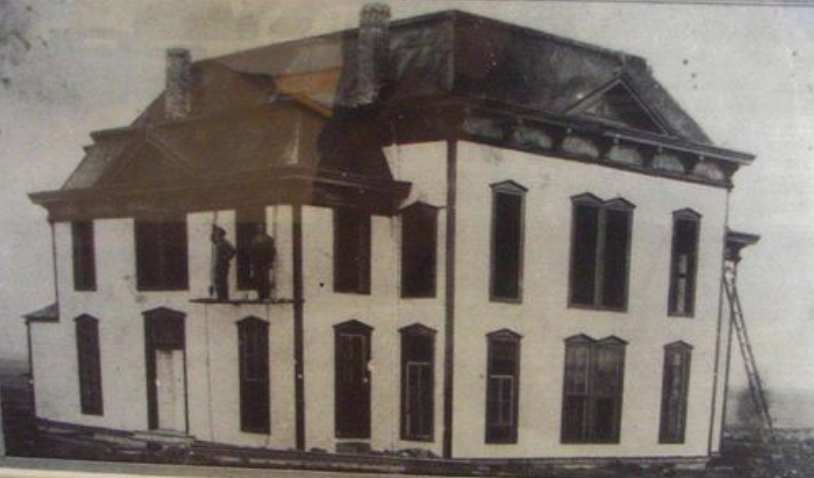 As a replacement for its structurally unsound predecessor, Wheeler County’s second courthouse adopted the Italianate style of its forebear, but neglected to follow its pattern of stone construction. It was a wooden frame building that stood two stories.

When Wheeler became the county seat in 1907, this building was literally moved down the road to the new center of government. By 1913, six years later, the county had grown sizably enough in population that county officials deemed the courthouse too small to conduct business properly. A separate building was therefore built on the square to hold the county clerk’s office. A decade later, that same structure was enlarged, which indicated to commissioners the need for an outright, proper, new courthouse.

A bond election in 1925 set aside those necessary funds. The 1888 courthouse was subsequently sold to the county sheriff Riley Price, who took it apart and used the salvaged lumber to build barns on his ranch. The 1913 county clerk’s office was demolished in 1929.

E.H. Eads, of nearby Shamrock, was the chosen architect for the county’s new courthouse. Among the class of courthouses standing today, this is one of only a few occurrences I know of in which a county resident provided the plans for his own county courthouse. The contractors involved were Hughes and Campbell.

The Wheeler County Courthouse Historical Marker can tell the rest of the story better then I can:

“Featuring Palladian windows and Corinthian columns characteristic of the Classical Revival style, the 1925 Wheeler County Courthouse typifies the favored style of American public buildings of its time. [C]urbs and sidewalks were in place after the summer of 1930. Gas heat and a water system were installed in 1926. The streets on all four sides of the courthouse were paved in 1944 and the surrounding streets in the late 1970s. Standing prominently on the town square, the historic Wheeler County Courthouse continues to serve as the center of local government.”

Wheeler County is cattle country. We passed this very large, and very pungent, cattle operation on the way into Wheeler. 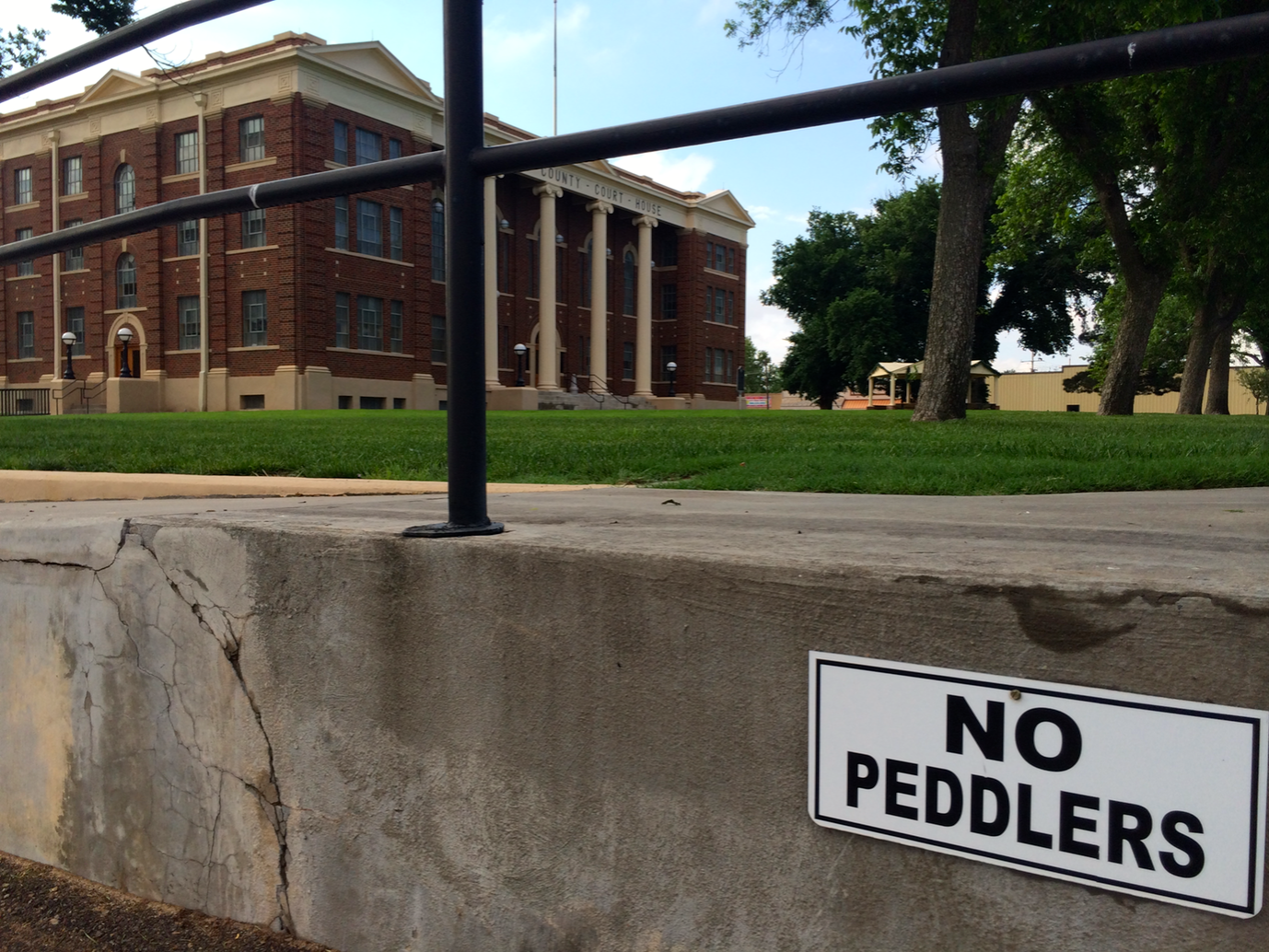 Keep in mind, there is a strict “No Peddlers” rule on the grounds.

The northwest corner of the building

The western façade, on Main Street 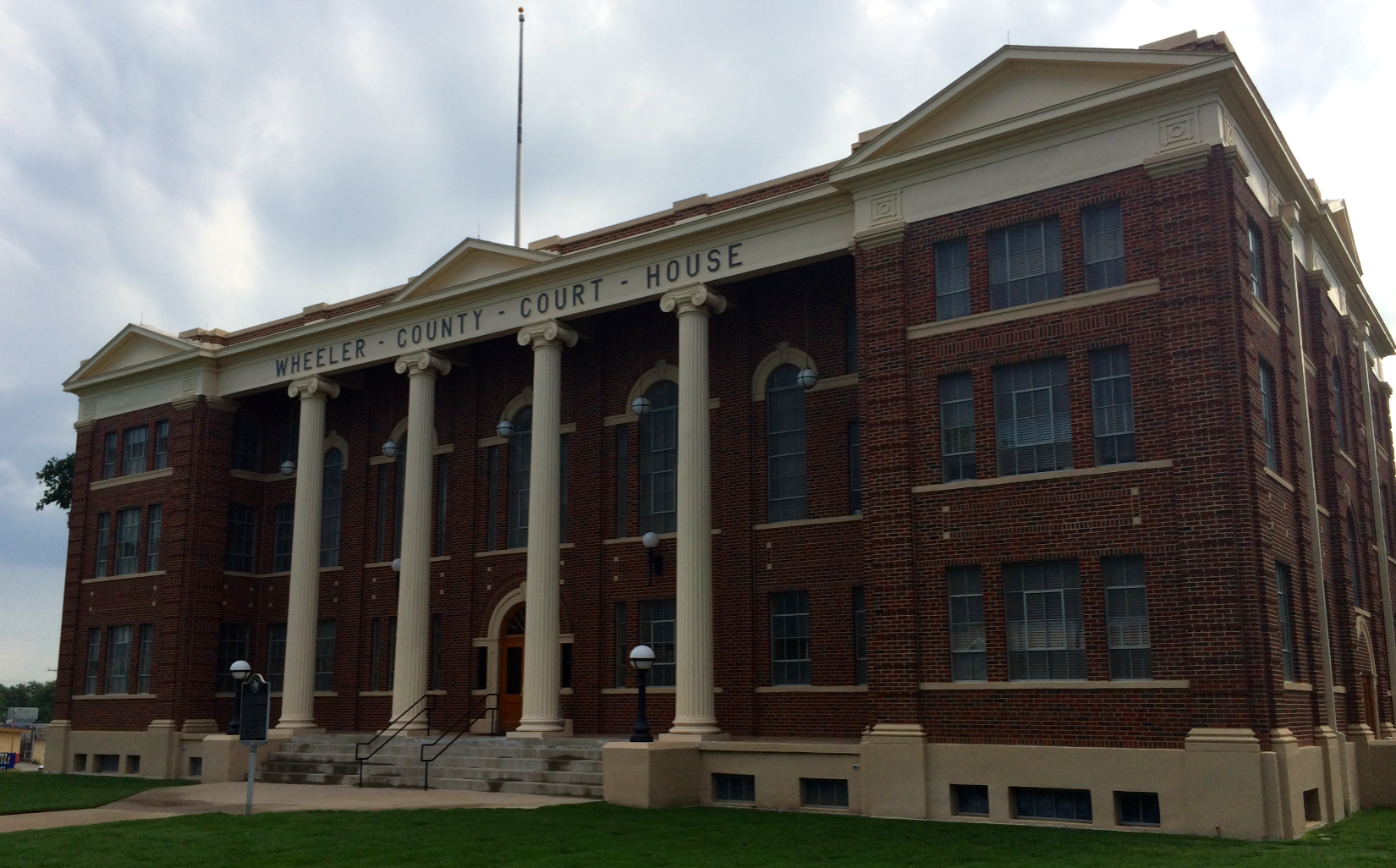 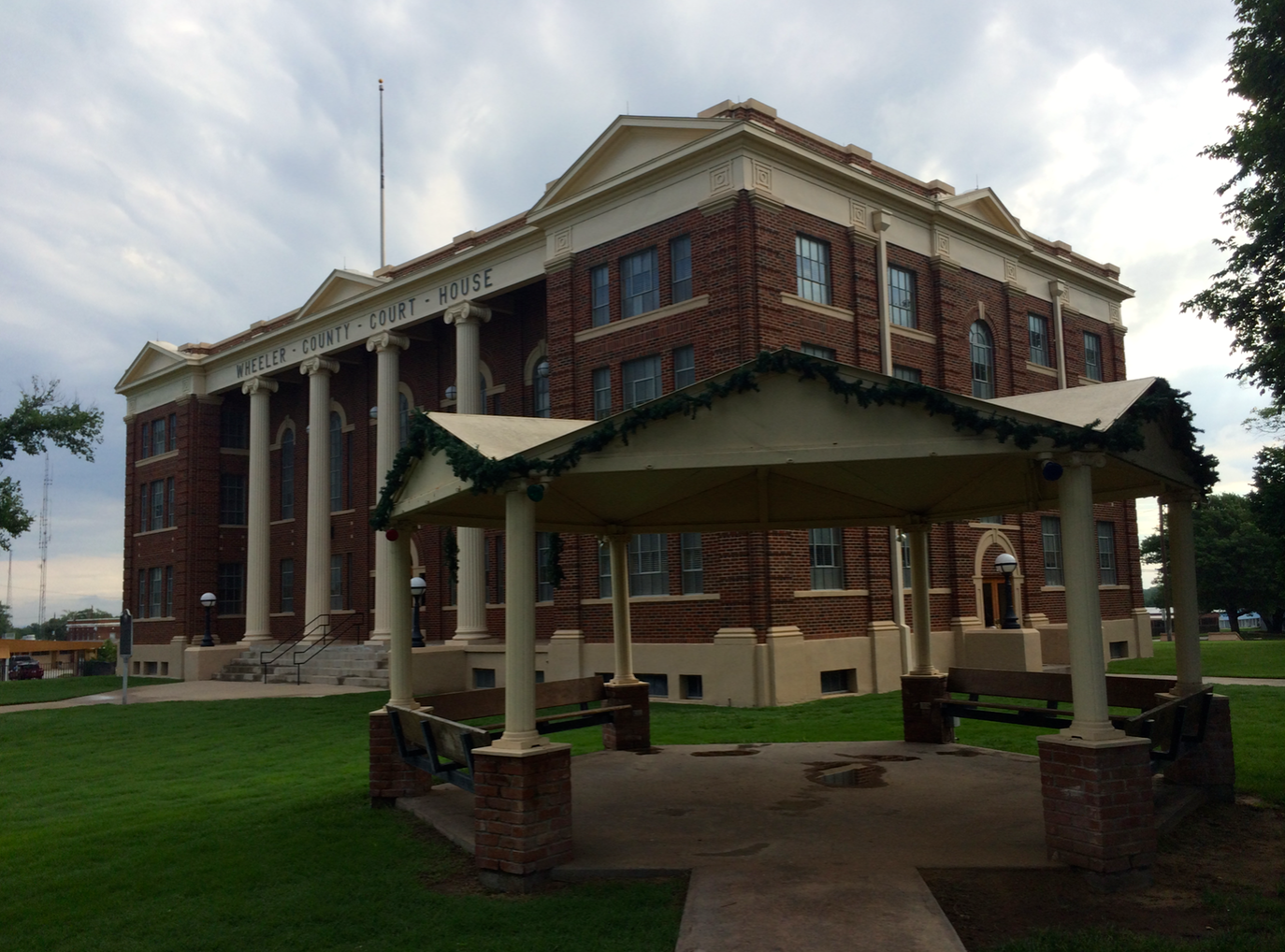 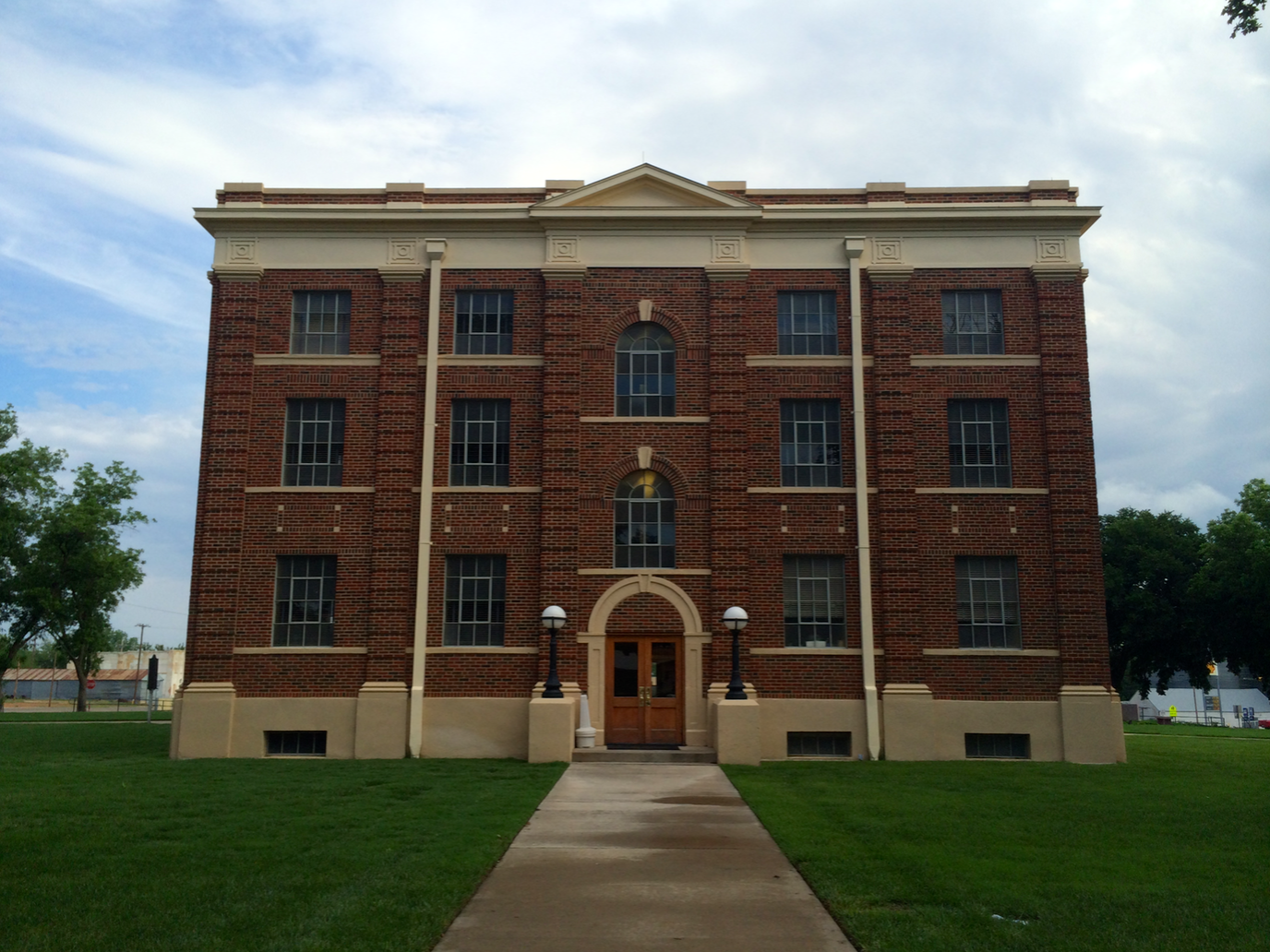 The southern façade, on Texas Avenue 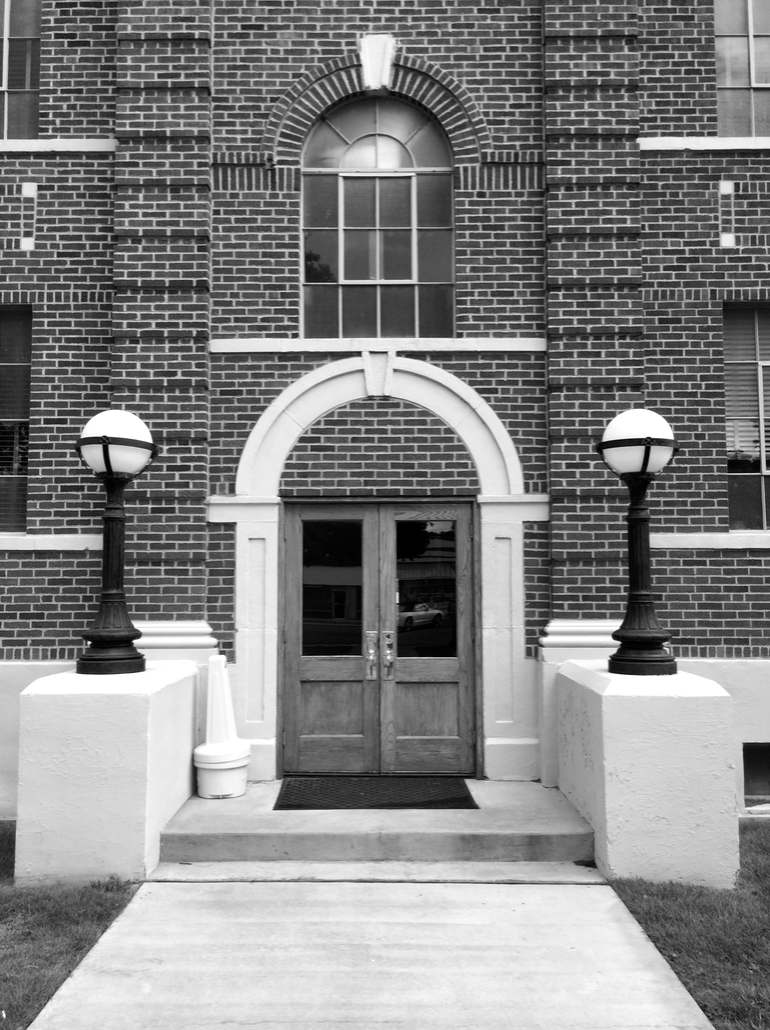 Texas Avenue, as seen from the southern doors 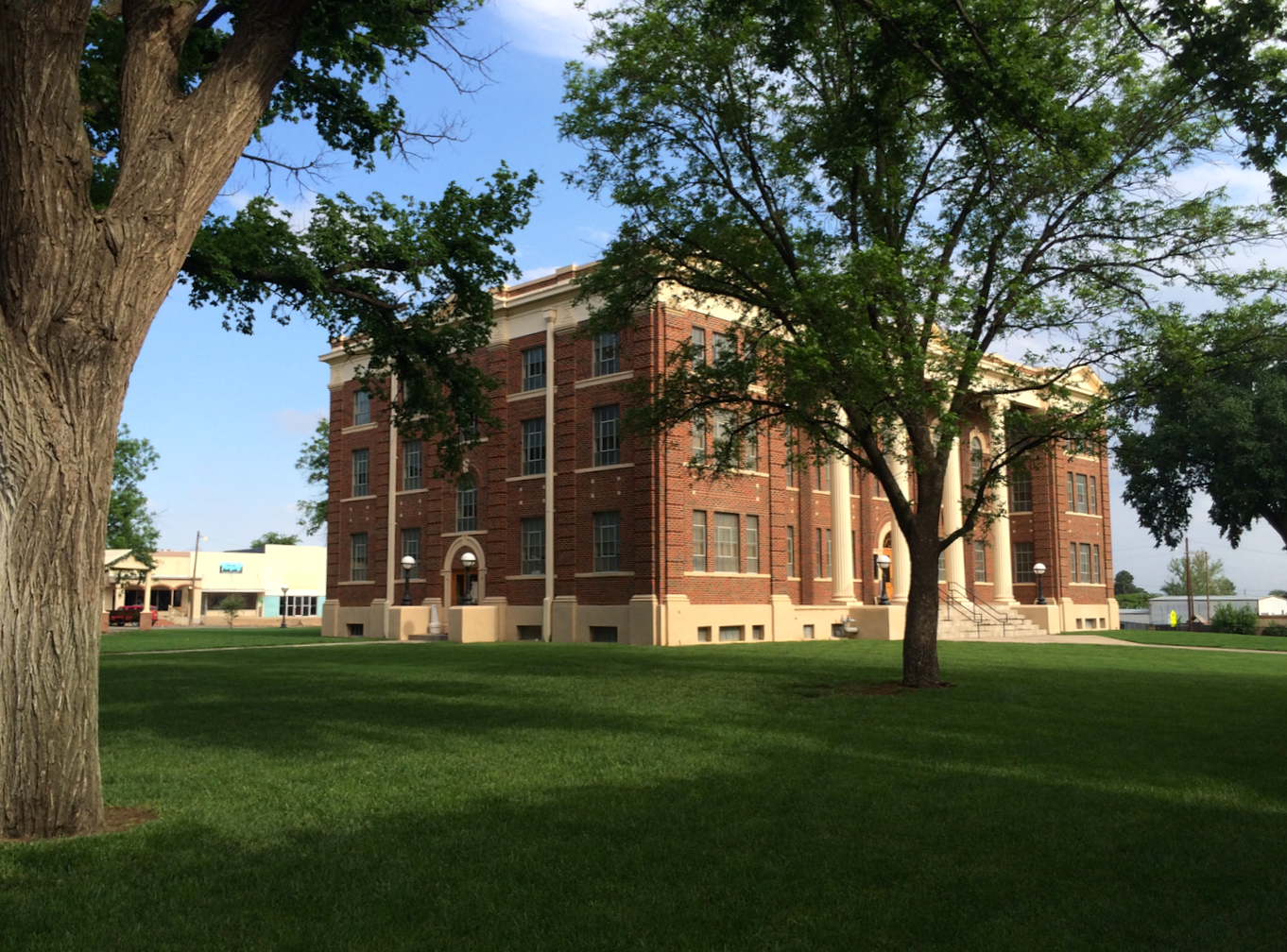 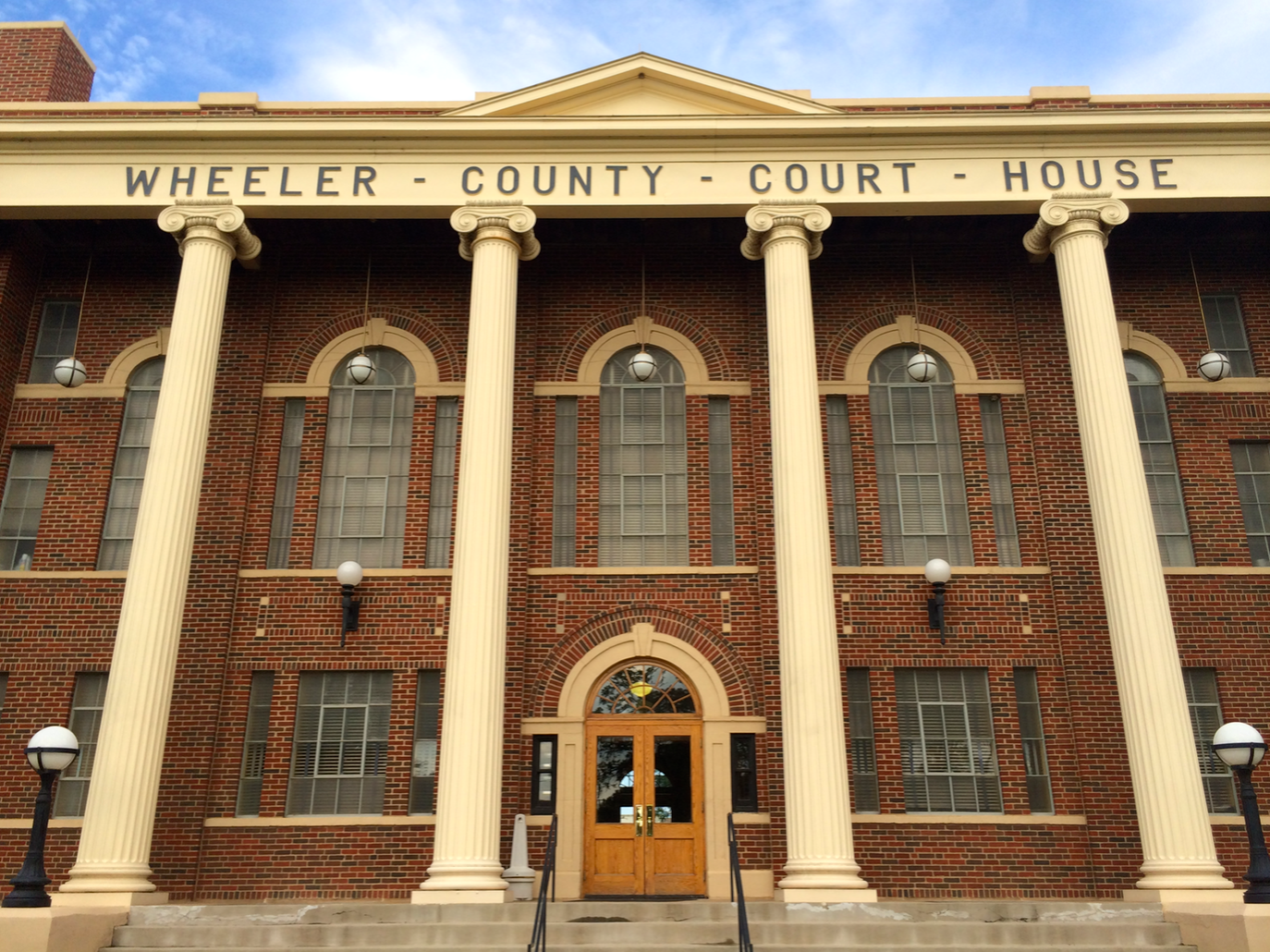 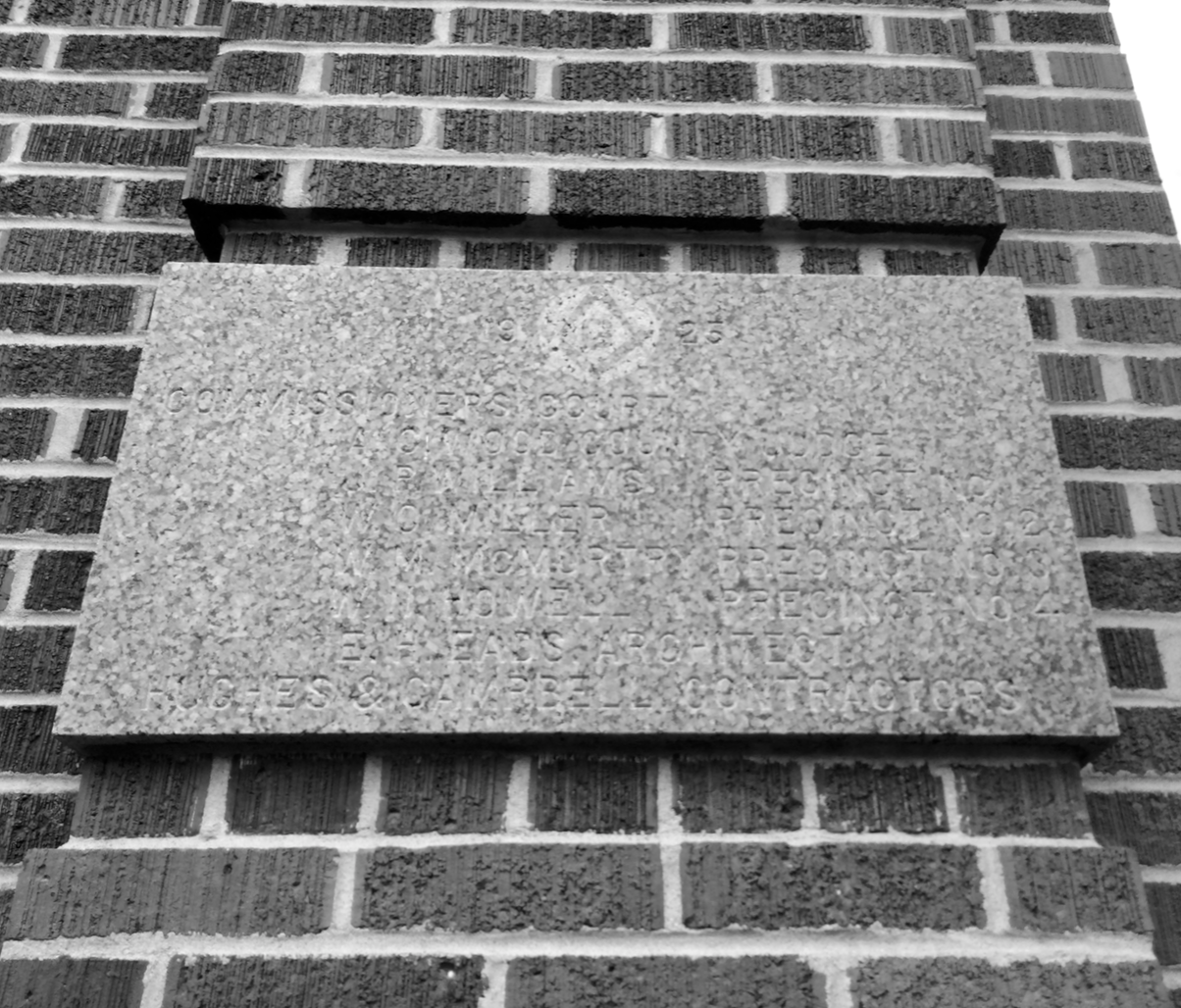 The cornerstone is tricky to read.

Also on the courthouse lawn is the historic Wheeler County Jail, now the sheriff’s office. 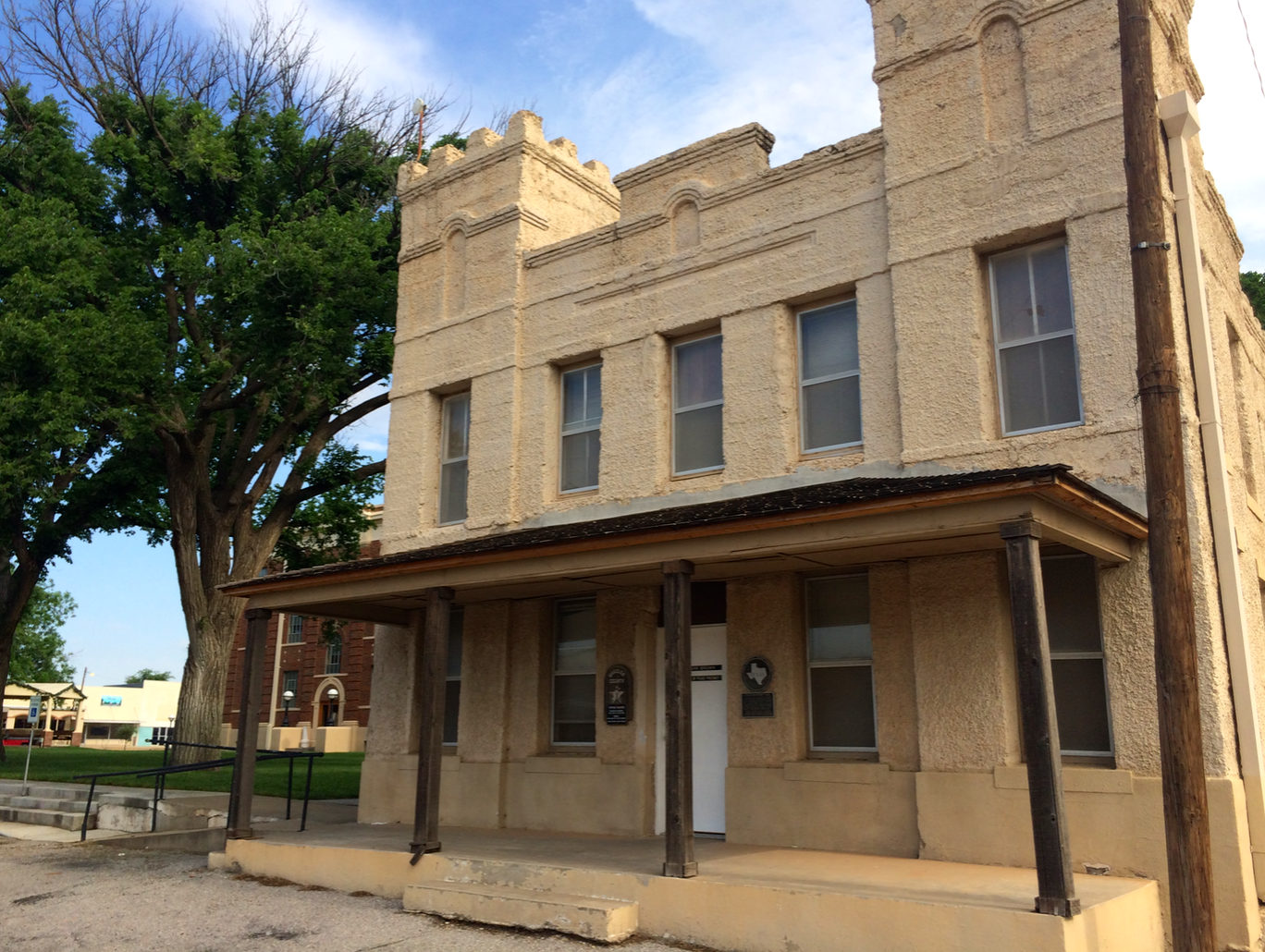 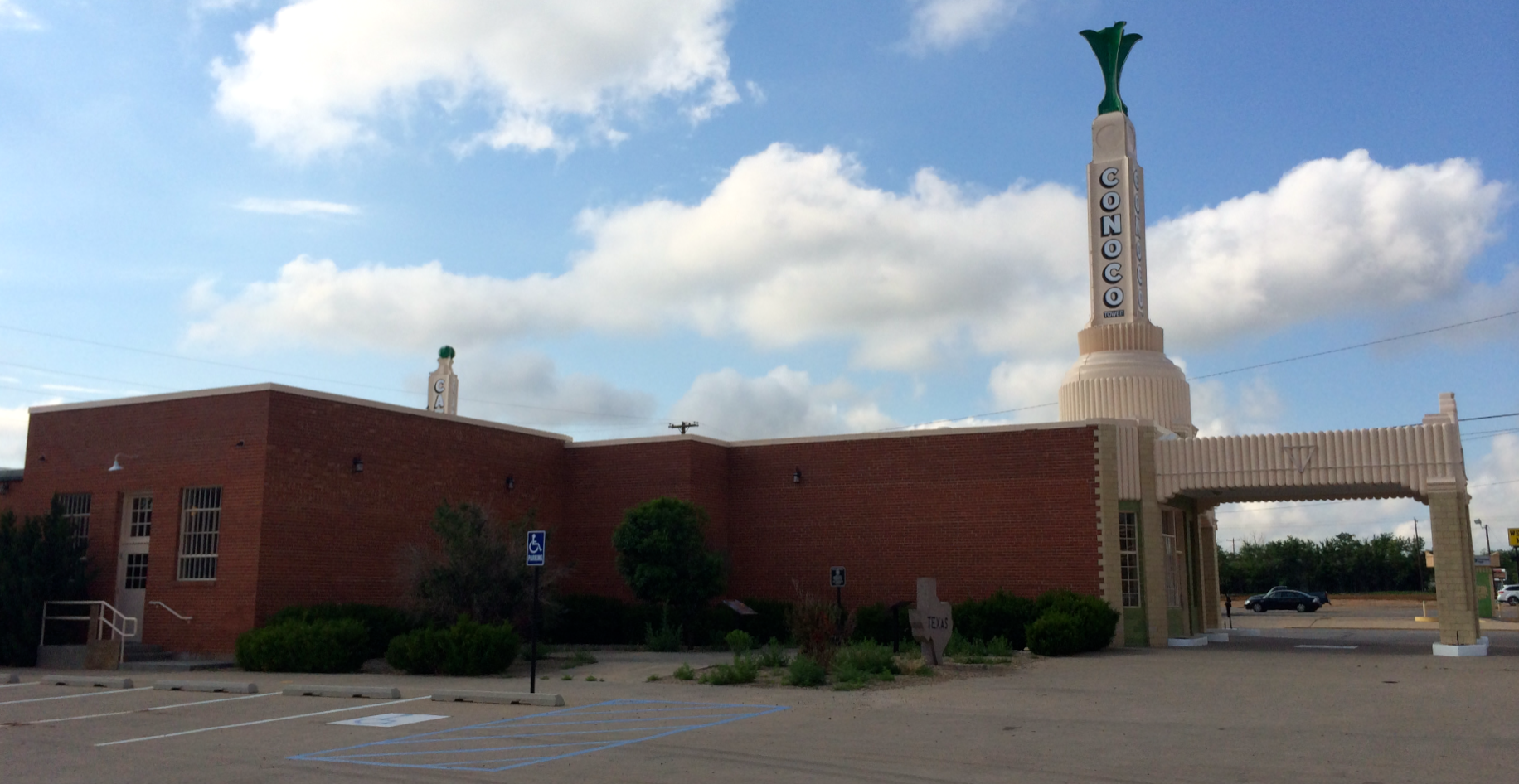 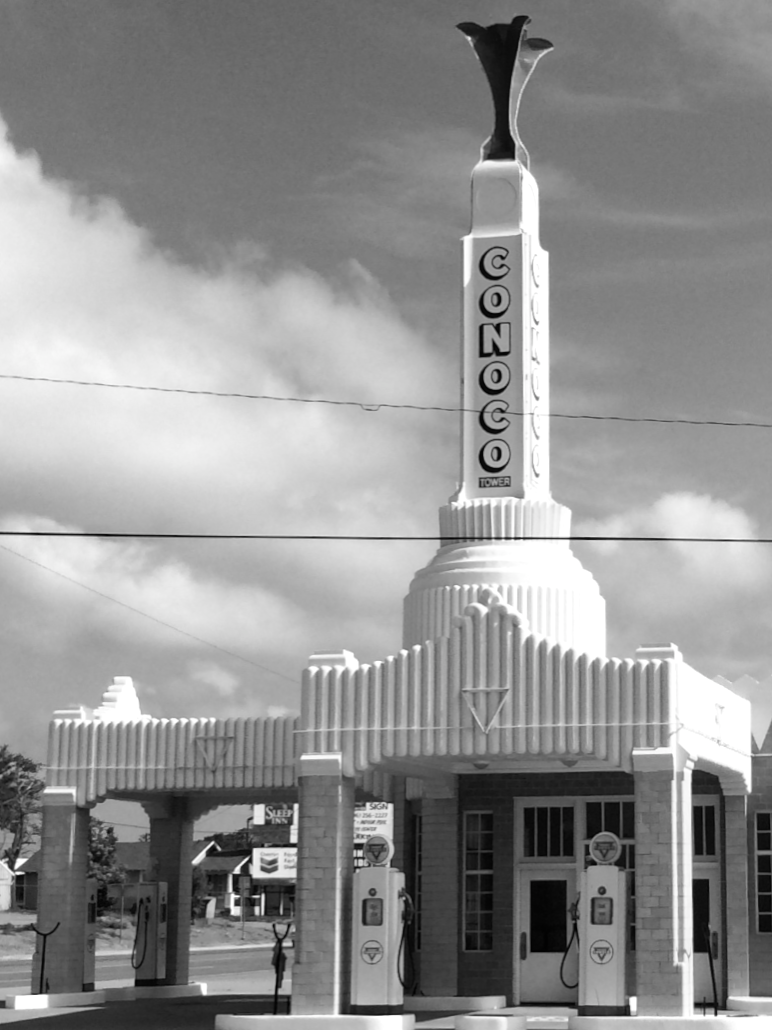