“The county was named for two distinguished Texans with the surname Roberts, John S. Roberts and Oran Milo Roberts. Miami is the county seat. The county is crossed by U.S. Highway 60, State Highway 70, and the Atchison, Topeka and Santa Fe Railway. Roberts County covers 924 square miles of rolling plains with elevations that range from 2,467 to 3,219 feet above sea level. Annual rainfall is 20.7 inches.”

“The nomadic Comanches hunted the immense herds of http://254texascourthouses.com/euro-palace-online-casino-download-android-apps/ that ranged through the area that would become Roberts County. The actions of Ranald S. Mackenzie and federal troops in the Red River War of 1874–75 removed the Indian threat. At the same time buffalo hunters killed off the great herds of bison.”

“In 1876 Roberts County was carved from Bexar County and the Clay Land District and attached to Wheeler County for judicial purposes. The first settler was Bill Anderson, who arrived the same year. Henry Whiteside Cresswell established the first ranch on Home Ranch Creek in 1877. Cresswell included most of Roberts County in his Cresswell Ranchand ran 45,000 cattle on land spanning several counties. Marion Armstrong opened a stagecoach stand on Red Deer Creek at the site of future Miami in 1879.”

“In 1887 the Southern Kansas Railway built a line from the Oklahoma border into the Panhandle, passing through Roberts County and linking up with Panhandle City the following year. Settlers followed in the wake of the railroad, and the town of Miami was platted out along the railroad in the southeastern part of the county in the summer of 1887. Settlers around Miami petitioned for county government, while cattlemen and settlers along the Canadian River in the northern part of the county framed a counter petition with Parnell, a small settlement in the northwestern part of the county, as proposed county seat.” 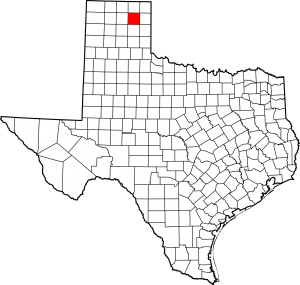 “The county was organized in January of 1889, and Miami was chosen as the county seat, but the election was declared fraudulent in December, and Parnell was chosen county seat instead. Parnell remained the county seat until 1898, after another election relocated the seat of county government back to Miami. By 1890 Roberts County had a population of 326 and thirty-four farms and ranches. Among the important ranches were the Cresswell Ranch, the Turkey Track Ranch, and the Cross Bar Ranch. Miami prospered as the shipping point for cattle.”

“Throughout its history Roberts County has remained one of the most sparsely populated counties in the state. Most of the inhabitants of the county have been white of English, Irish, and German descent; in 2000 blacks comprised 0.34 percent of the county’s residents and Hispanics made up less than 4 percent of the population.”

“Agribusiness and oilfield operations came to dominate the county’s economy. Oil was discovered in Roberts County in 1945, and 40,126,321 barrels had been produced through 1990. Almost 412,600 barrels of oil and 23,574,562 cubic feet of gas-well gas were produced in the county in 2000; by the end of that year 44,937,568 barrels of oil had been taken from county lands since 1945. Though the number of acres devoted to wheat production never returned to its 1930 level, wheat remained the dominant crop through the 1990s, while the number of cattle raised in the county remained in excess of 30,000 over the same period.”

“Miami, the county seat and the only incorporated community in the county, had 675 inhabitants in 1990; in 2000 588 people, more than two-thirds of the county’s residents, lived there. The annual National Cow Calling Contest has been held in Miami since 1949, and there are a number of scenic drives in the county.”

Just to note, it’s “my-am-uh” (unlike that other Miami in Florida). 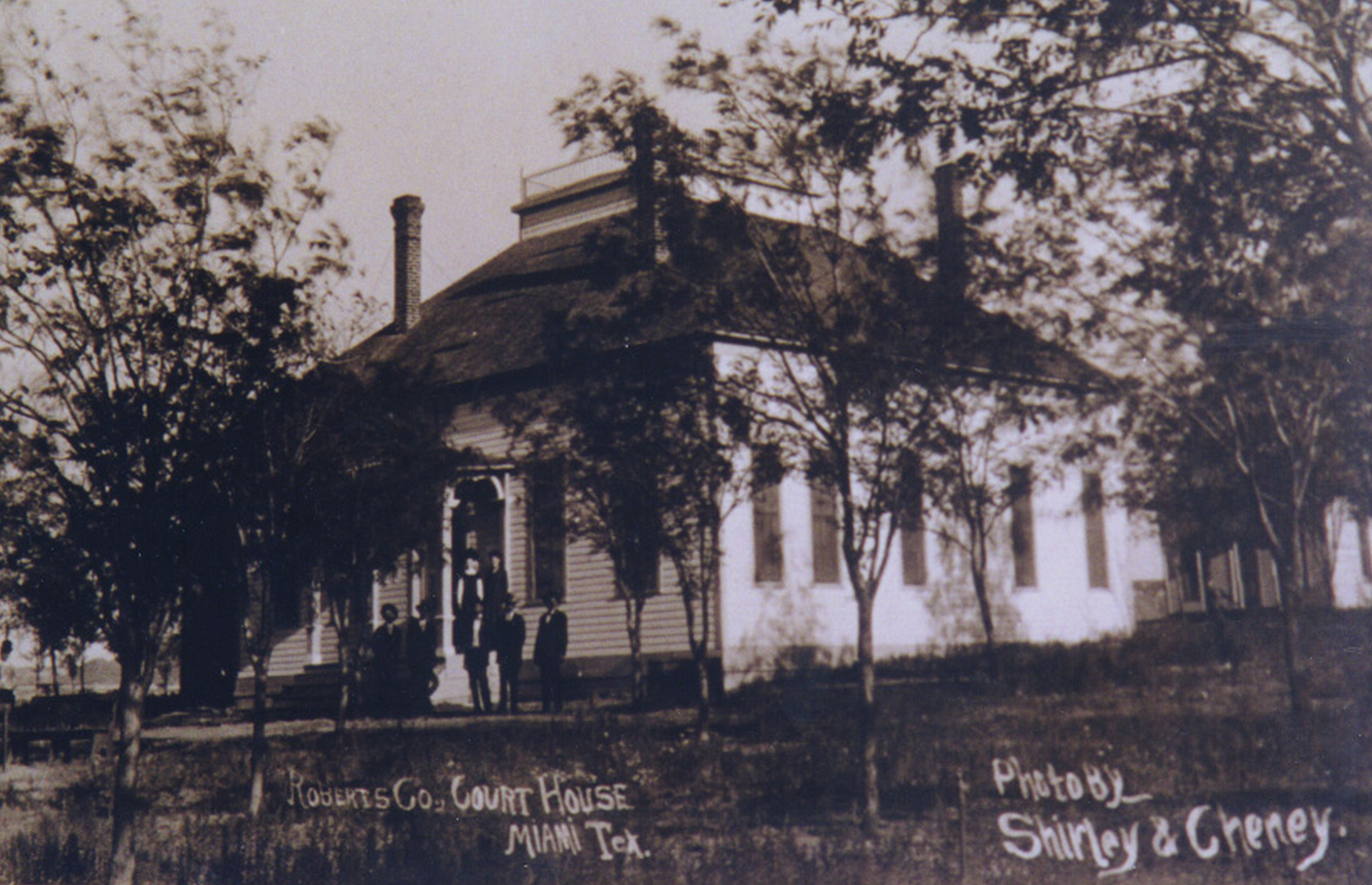 This building was built in 1890 by an unknown contractor, and served the county in Parnell, the first county seat. After Miami took on that role, the building was moved there. County officials demolished it sometime around 1913. 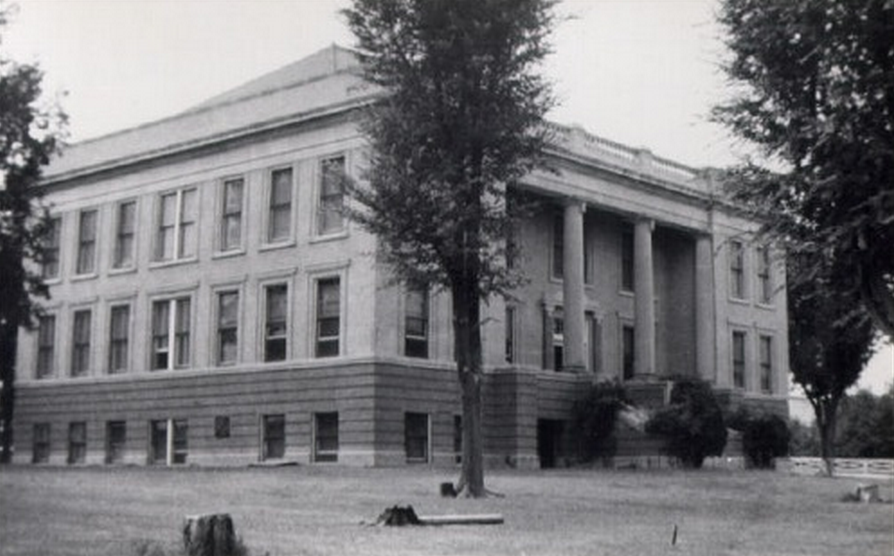 The contractors on hand were from the firm Bone & Parr of Amarillo. An elevator and handicap ramp were installed in 1985. 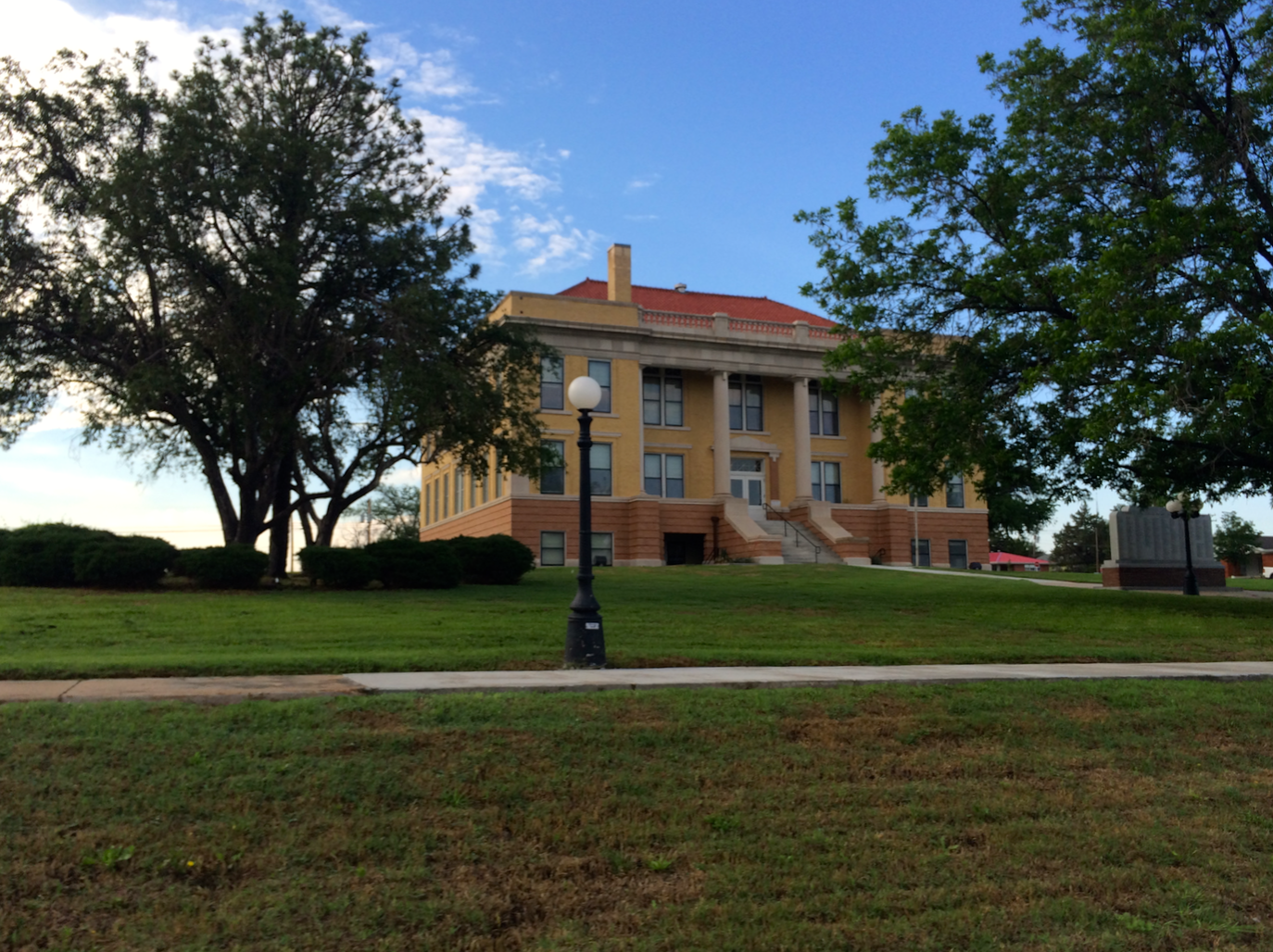 The Roberts County courthouse rests on a gradual hill on the eastern side of town. 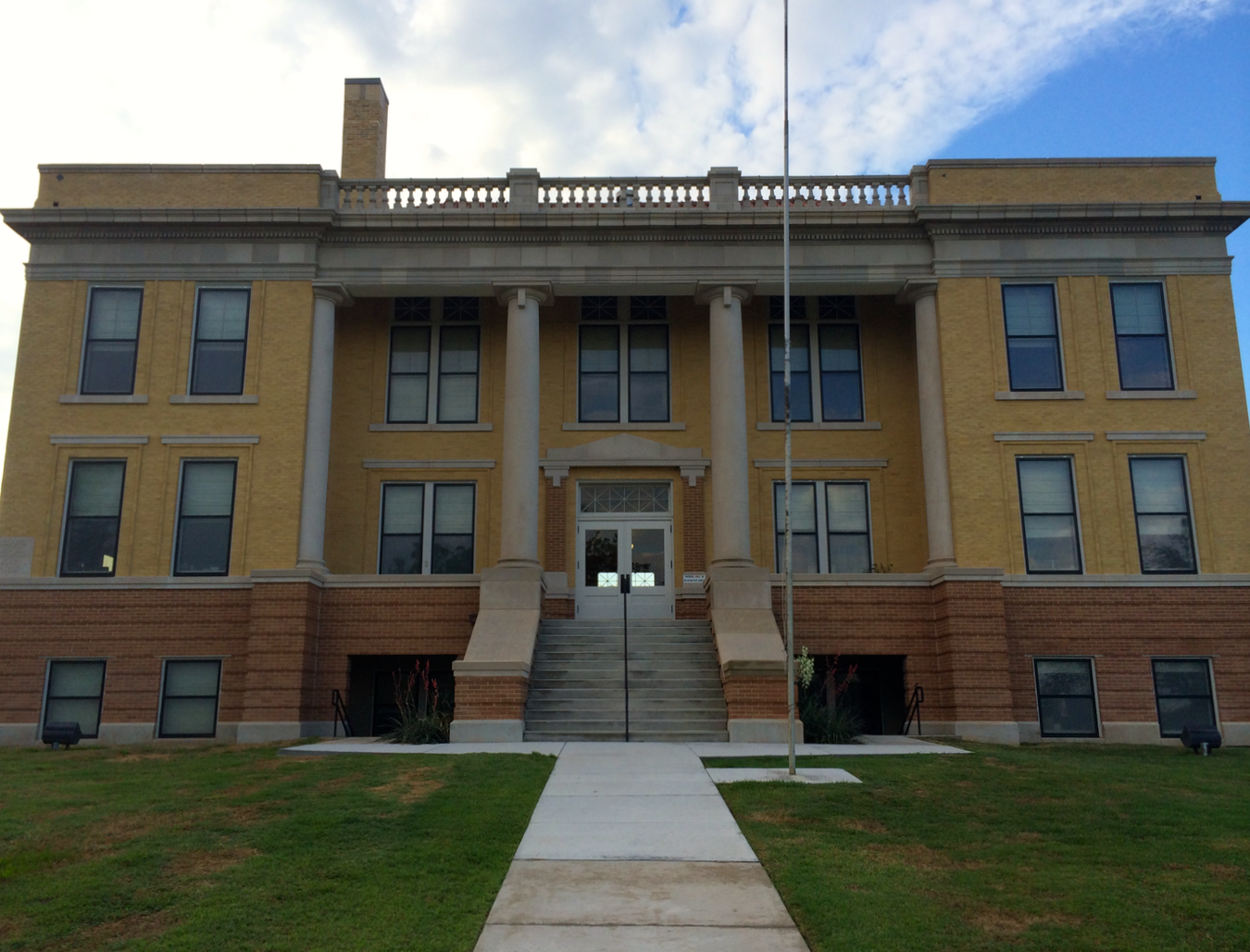 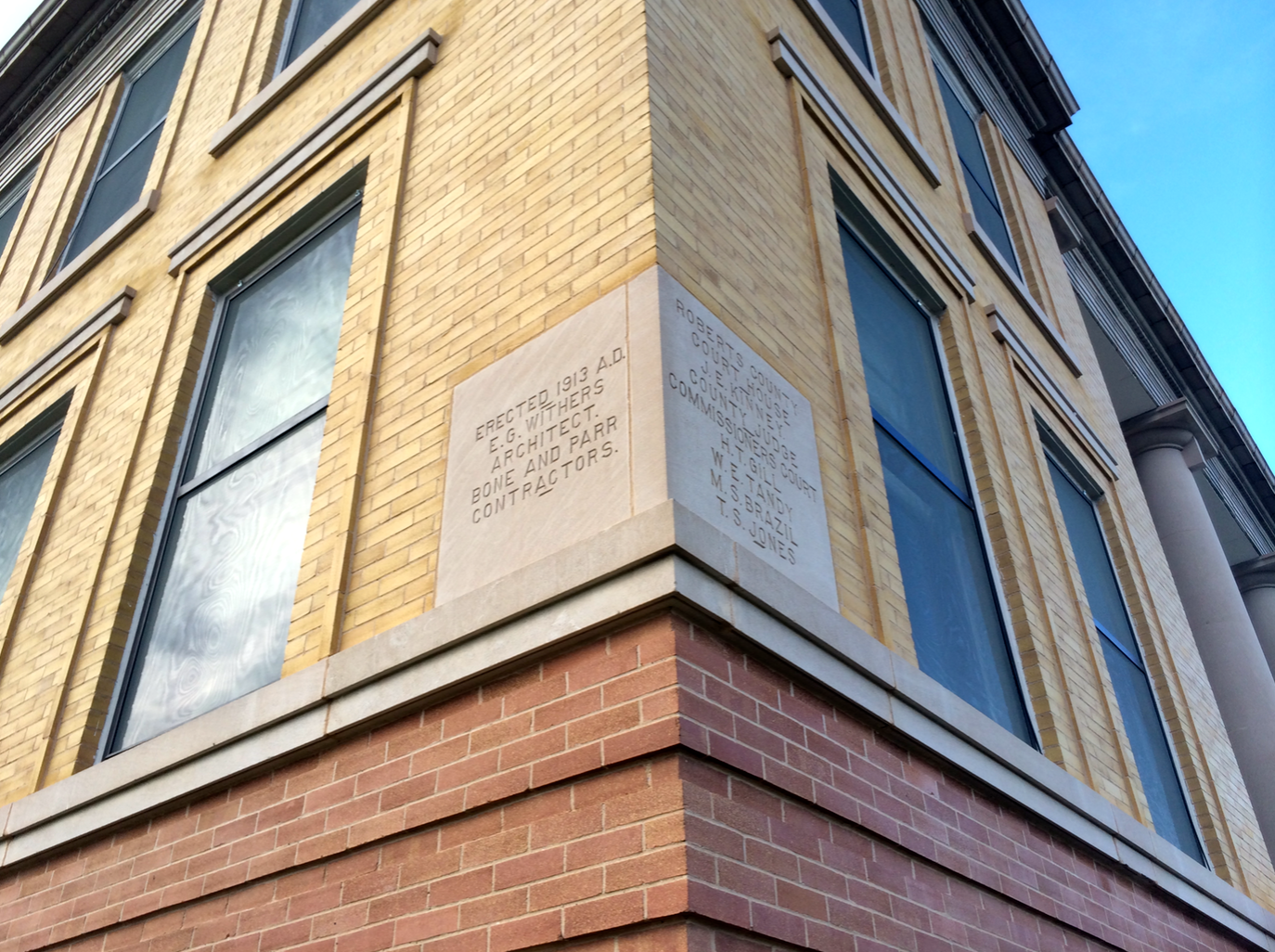 The cornerstone is on the northern corner. 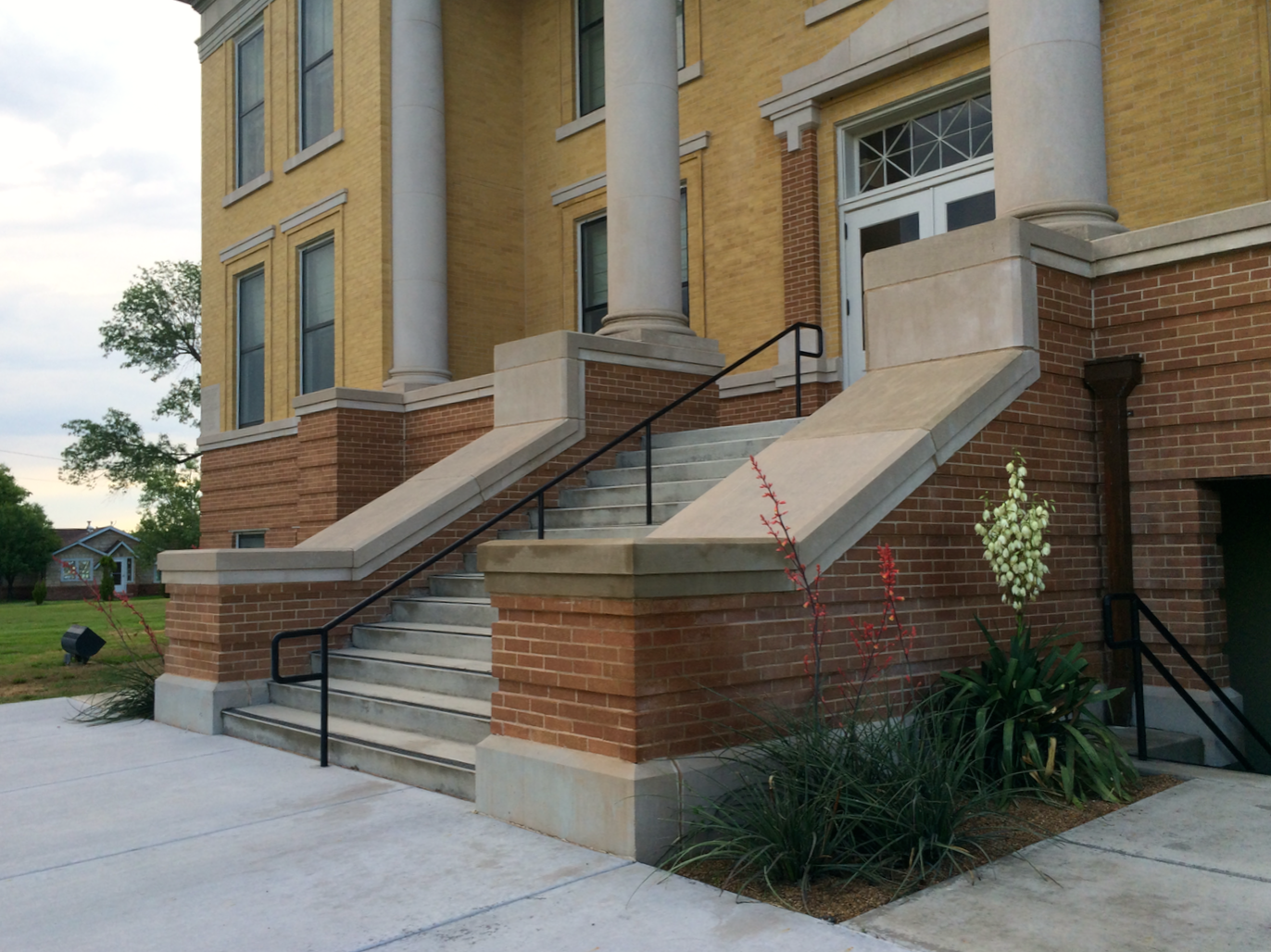 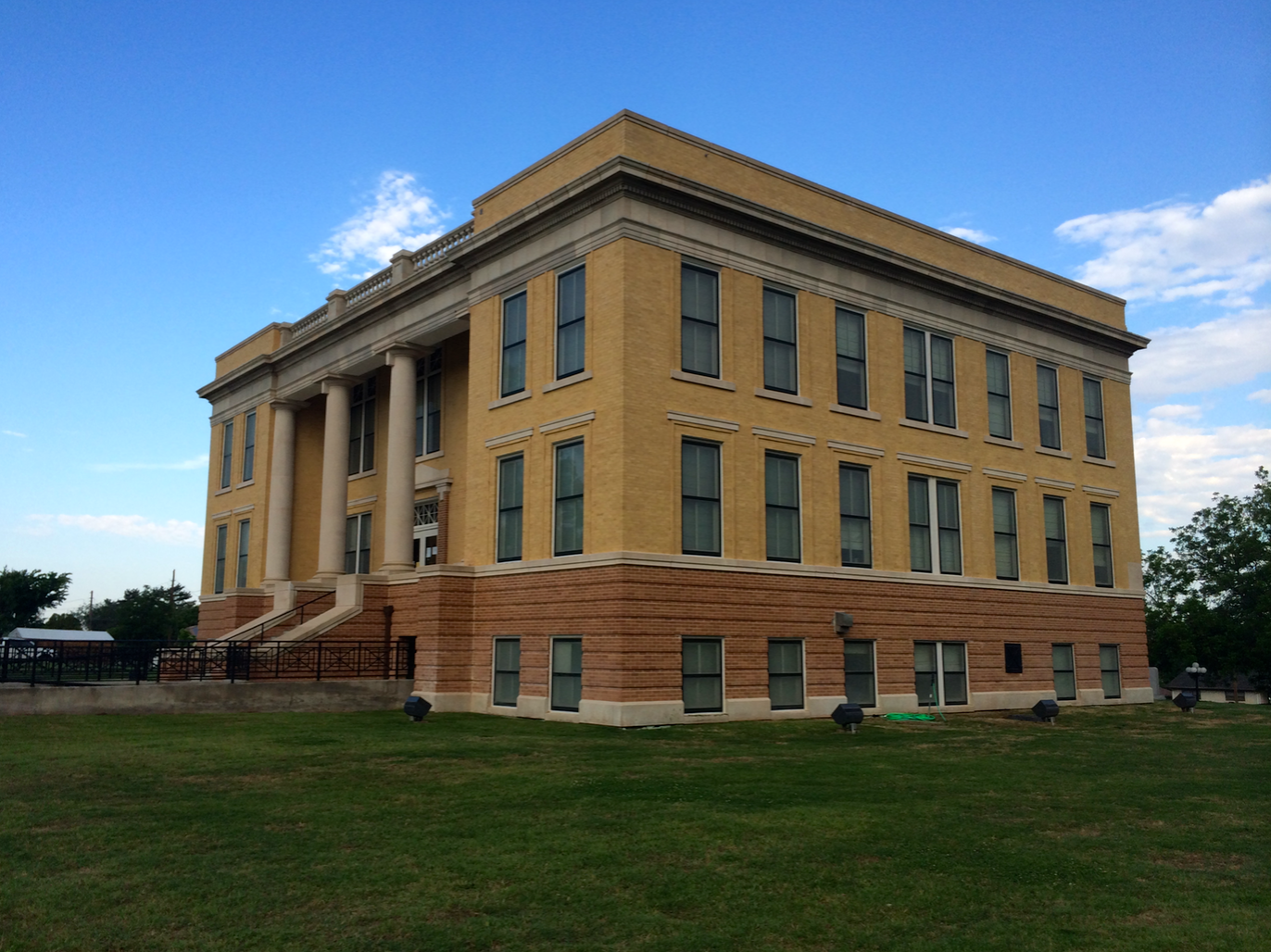 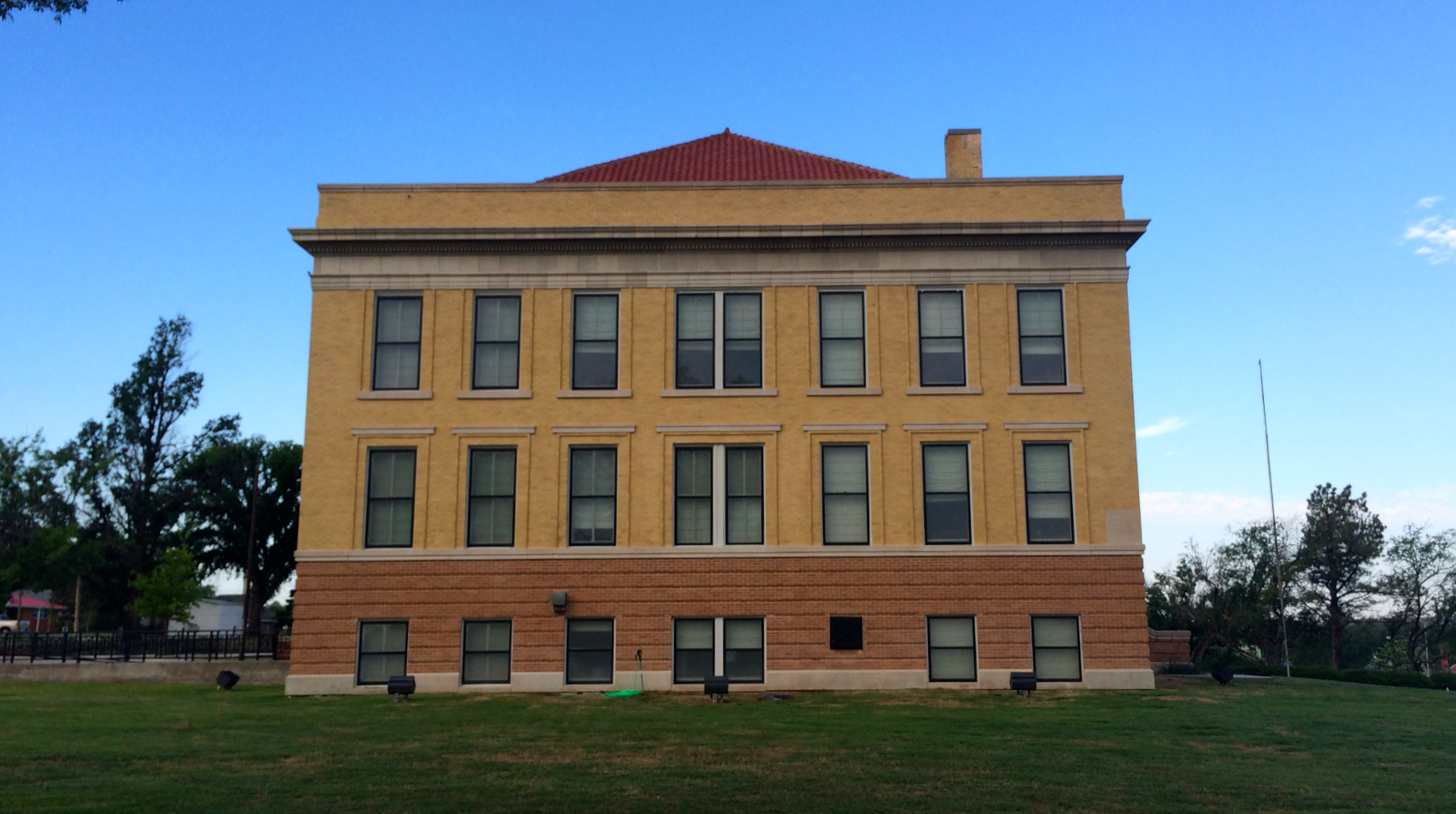 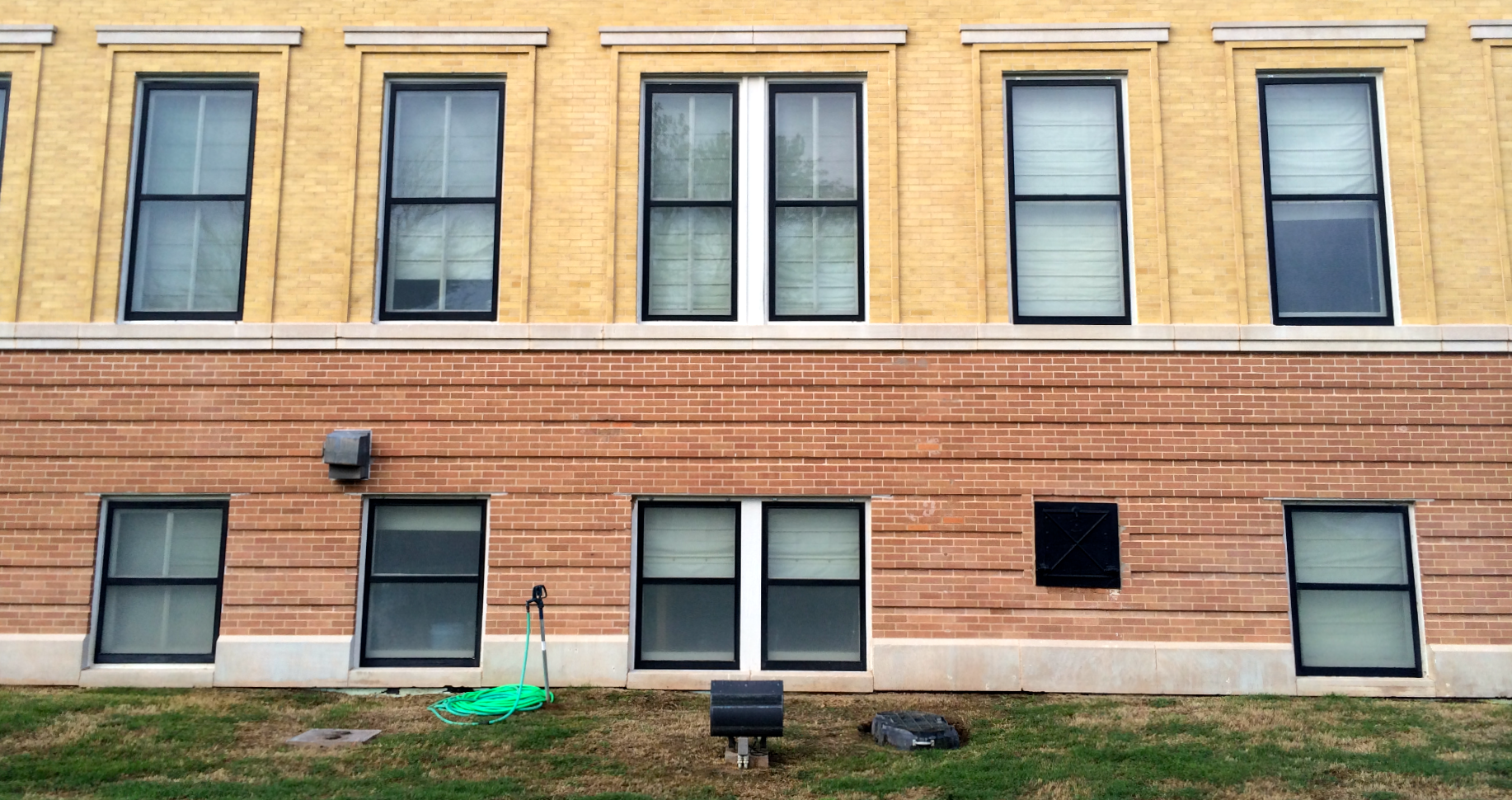 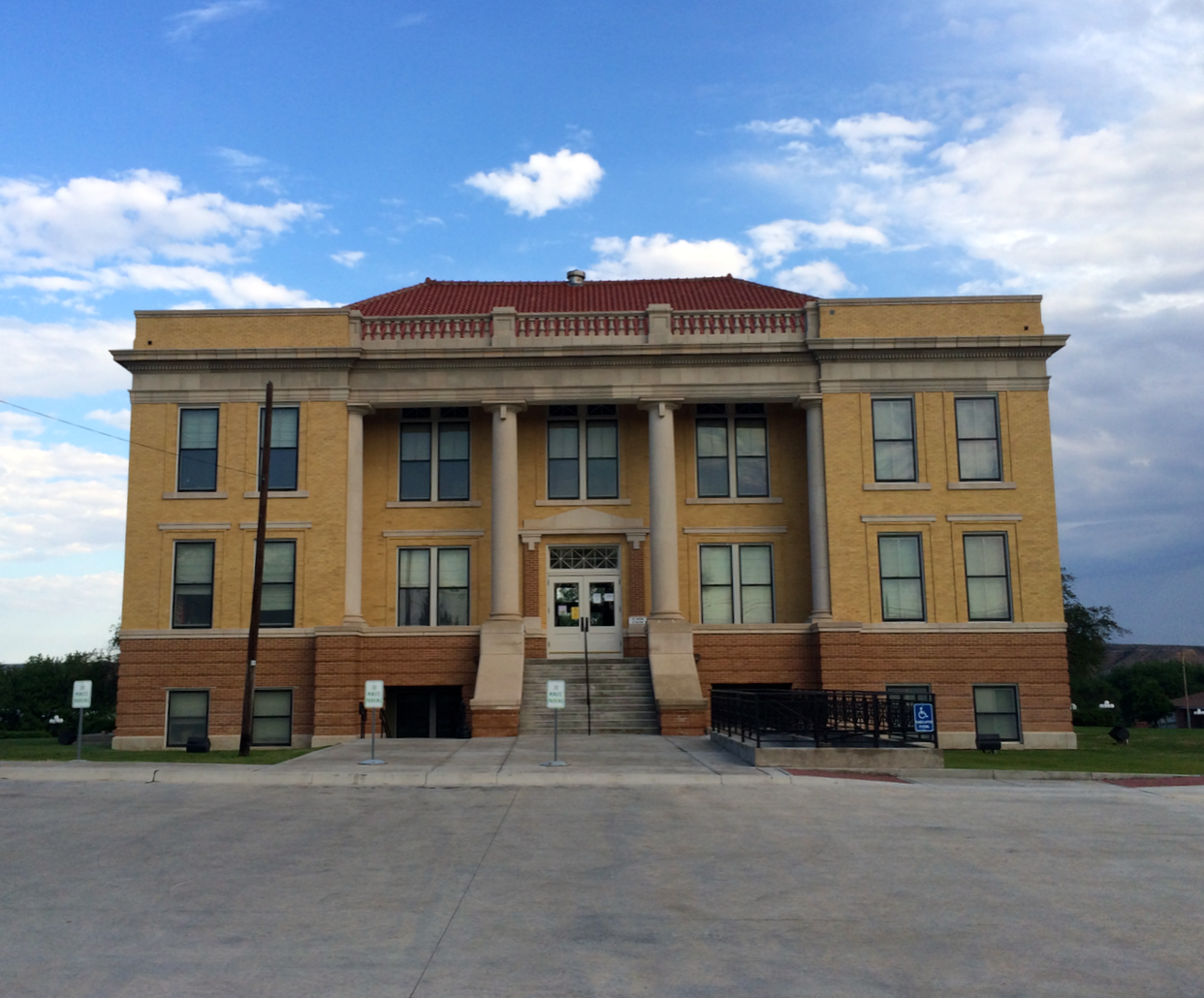 The courthouse interior, as seen through the southeast doors 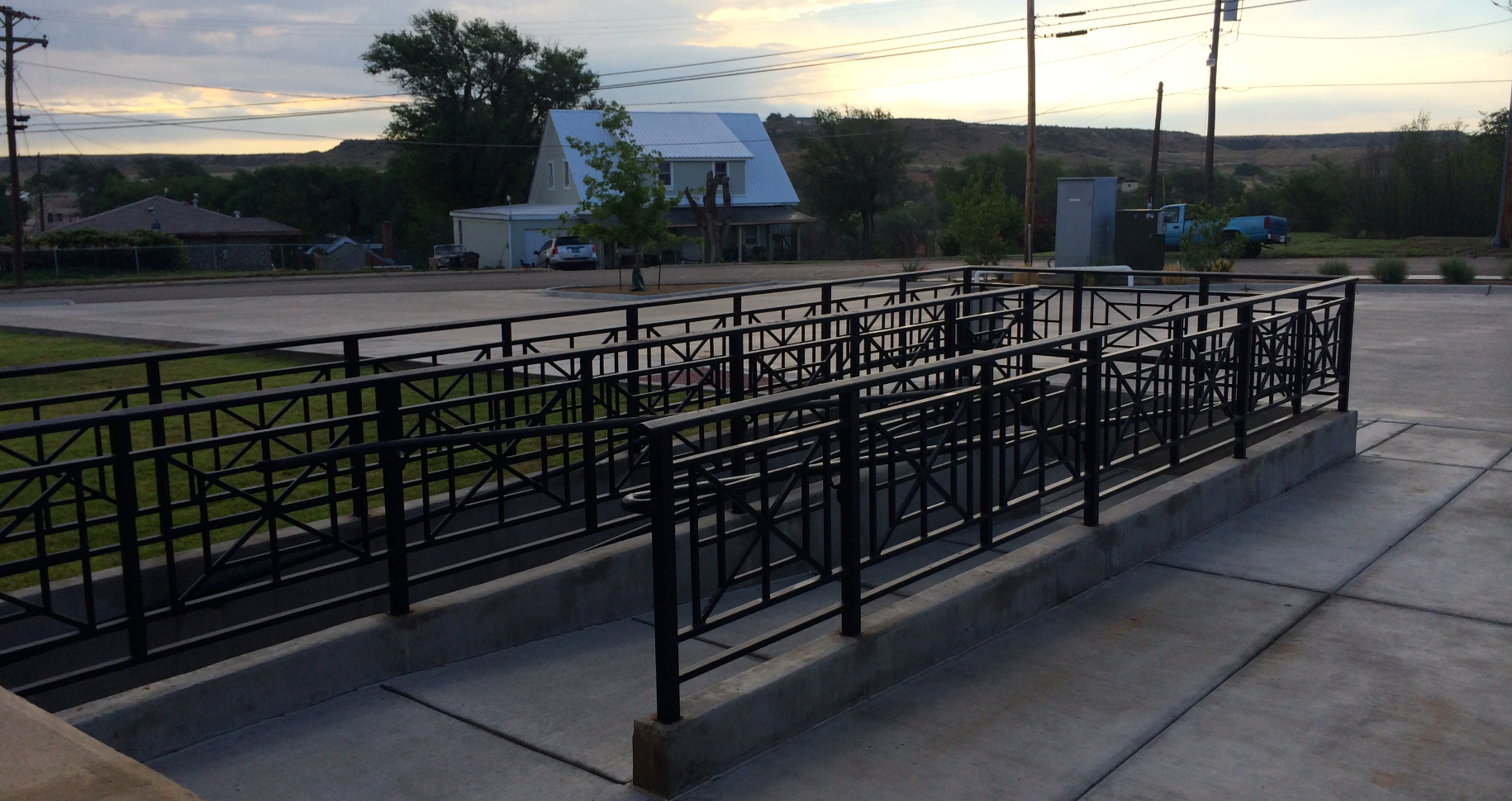 The handicap ramp was installed in 1985.

The view from the southeast entrance

Leonora Street merges with Wichita and Kiowa Streets near the western courthouse corner. The Roberts County landscape spills away into the horizon. 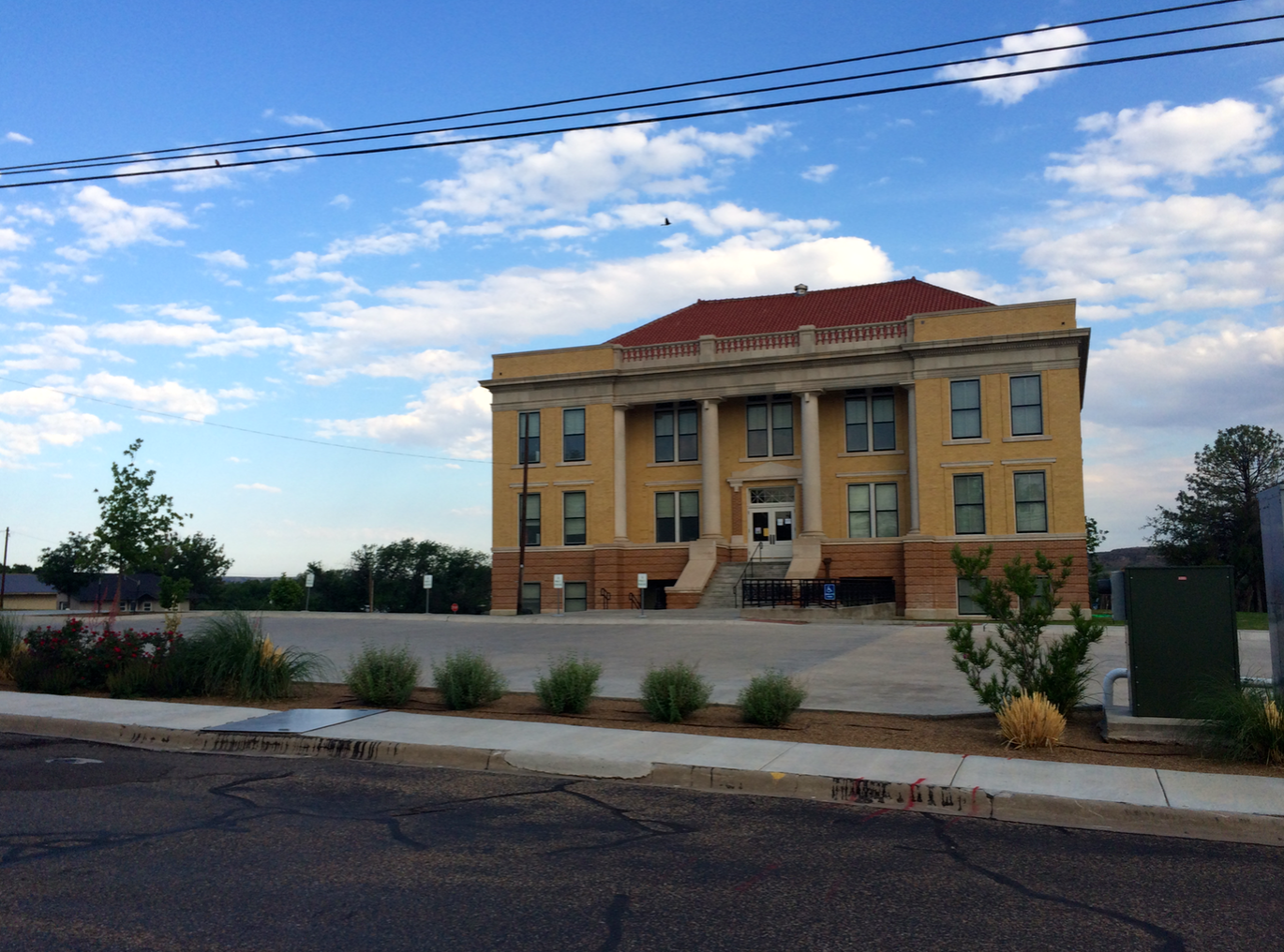 The courthouse, as viewed from across the parking lot on Wichita Street 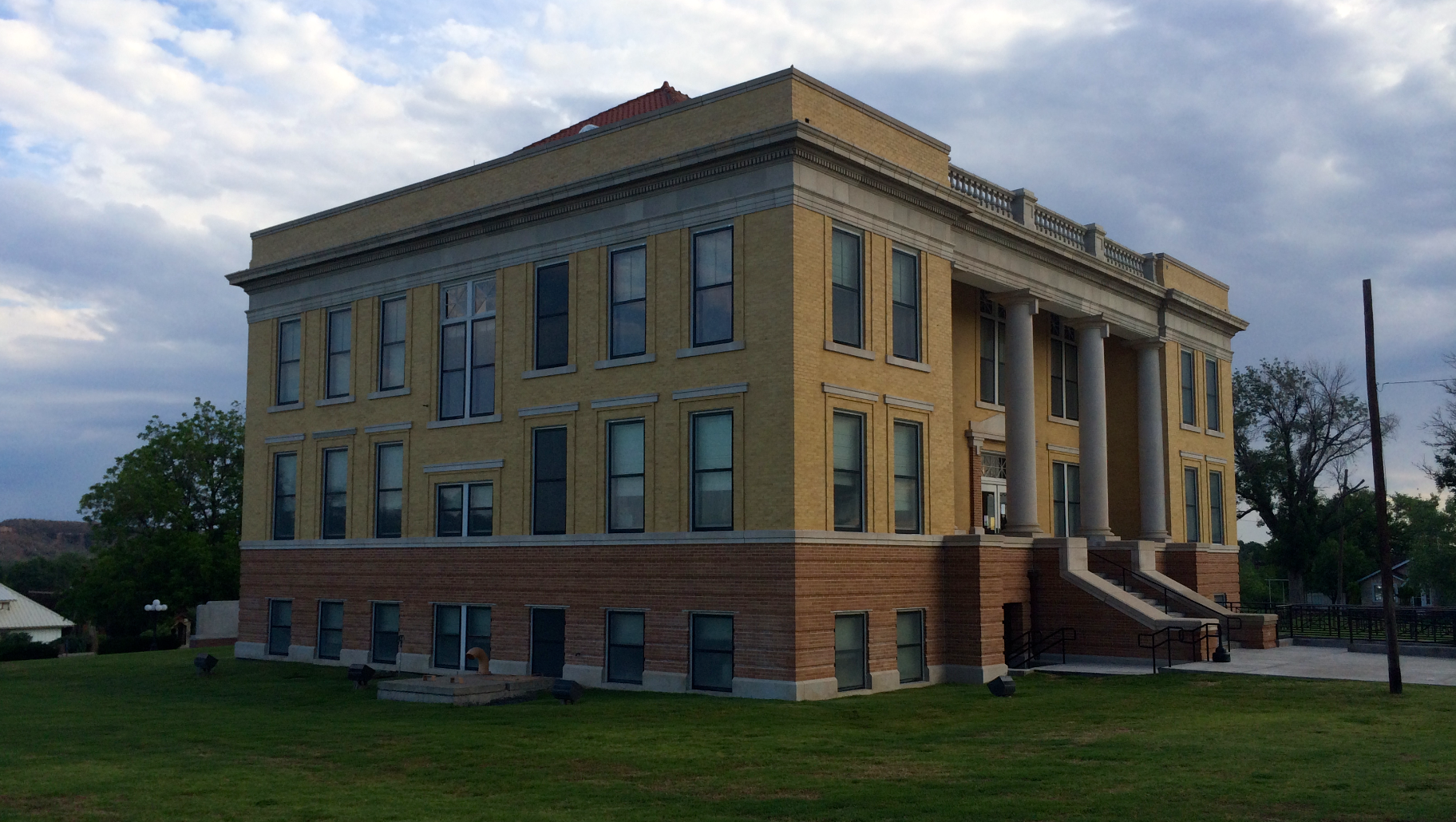 The view from the southwest façade 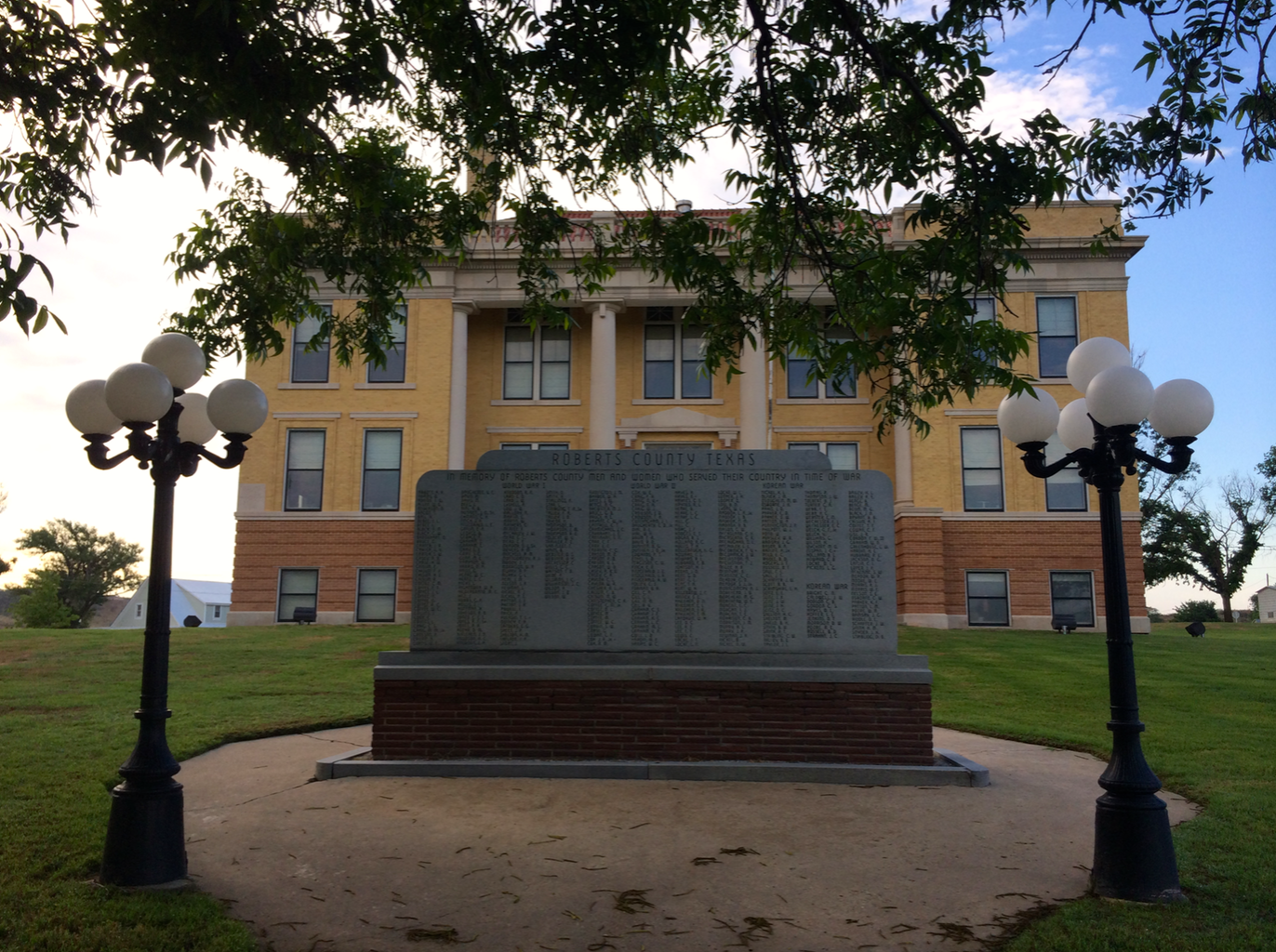 No beachfront mansions here, but I love the flag in the window. This is on Kiowa Street.