“Johnson County comprises 740 square miles with three geographical areas. The western half is a part of the Grand Prairie, where the predominant soil type is alkaline loam over limestone. About one-third of the county is in the Eastern Cross Timbers, with acid soils that are both loamy with clay subsoil and sandy with loamy subsoils. The rest of the area to the east is Blackland Prairie, with deep clayey, alkaline soils.”

“The initial permanent settlements came in the mid-1840s. Charles and George Barnard established a trading post near Comanche Peak in an area no longer in Johnson County. The earliest known resident of what is now Johnson County was Henry Briden, who settled on the Nolan River in 1849. The county was marked off in 1854 from Ellis, Navarro, and Hill counties. Its population was then 700. Its name came from Middleton T. Johnson, who had served in the Mexican War, on the Texas frontier, and later in the Civil War, and also served as a legislator.”

“The first county seat was Wardville, named for Thomas William Ward, second commissioner of the General Land Office of Texas. In 1856 Buchanan, named after the newly elected president of the United States, became the county seat. After the western portion of the county was severed in 1867 to form Hood County, Cleburne, which was named after Gen. Patrick Cleburne, was chosen county seat. In 1881 a section of Ellis County was added to Johnson County, thus completing its current boundaries.”

“The oldest settlements in Johnson County were in the east. The site of Alvarado was settled in 1851, and the town was platted in 1853. Grandview (originally two words), founded around 1860, was the second community established. In 1890 the population of the two was 1,342 and 713. The early county seats, Wardville and Buchanan, no longer exist. Both Joshua and Burleson were established as depots in 1882. The town of Keene grew up around the college. Other communities in the county include Rio Vista, south of Cleburne, and Godley, to the northwest.”

“Until the late twentieth century the economy of Johnson County was mainly tied to agriculture. The total value of farm production in 1870 was $192,716. Twenty years later the total was $1,554,960. Although corn remained a major crop, cotton production increased from 1,212 bales in 1870 to 18,826 bales in 1890. The vicinity of Venus, on the eastern edge of the county, was considered a major cotton-growing area. Livestock production also increased over this same twenty-year span. Land ownership in the county was concentrated in the hands of relatively few people; of the 2,829 farms listed in the 1890 census, 1,232 (43.55 percent) were involved in some type of sharecropping system.”

“An important change in the economic climate came with the railroads. The first railroad to be constructed in the county passed through Venus in 1854. In 1881 Cleburne was connected by rail with Dallas. That same year the Gulf, Colorado and Santa Fe was completed through Johnson County. This line was eventually extended to connect the Texas coast with the Atchison, Topeka and Santa Fe line in the north. In 1898 Santa Fe repair shops were opened in Cleburne.”

“Johnson County entered the twentieth century as a rural county. The total population in 1900 was 33,819, with only 22.2 percent urban. The only major town was Cleburne, which had a population of 7,493. Between 1900 and 1960 the population remained fairly stable; it reached a peak of 37,286 in 1920, only to decline for the next twenty years. For many years Johnson County’s proximity to Fort Worth did not affect its growth, even though an interurban railroad did operate between Cleburne and Fort Worth from 1912 through the 1920s.”

“The influence of Dallas and Fort Worth began to be felt in the second half of the twentieth century. Johnson County was designated first as a part of the Fort Worth Standard Metropolitan Statistical area and later as part of the Dallas-Fort Worth SMSA, an indication of its economic ties to the area. Although the 1960 county population was still only 34,720, the population of Burleson in the north had reached 2,345, a 196 percent increase since 1950. The next decade saw an increase of 224 percent as Burleson became a bedroom community to the expanding Fort Worth area. The growth resulted in the establishment of an ancillary courthouse in Burleson.”

“In 2000, the census counted 126,811 people living in the county. About 84 percent were Anglo, 3 percent were black, and 12 percent were Hispanic. Almost 77 percent of the residents age twenty-five and older were high school graduates, and almost 14 percent had college degrees. In the early twenty-first century agribusiness, the railroad shops, and some manufacturing and distribution activities were the central elements of the area’s economy, though many residents commuted to Fort Worth to work.”

I’m a neighbor of Cleburne and Johnson County, but the official date I was their guest was May 24, 2014. This county was something of an anomaly: right next door, but #146 in the project. By #35, I’d been to every other bordering one.

Johnson County’s first courthouse was nothing short of a log cabin and stood in the original county seat, Wardville. Its recorded dimensions were 14 x 14 and it was constructed by William O’Neal in 1854.

Two years later, the seat moved to Buchanan, and a new courthouse was built that gained only slightly in size. Construction work on the 16 x 16, wooden frame courthouse finished in 1858.

Two yeas after that, another wooden frame courthouse was completed, this one standing two stories tall. For seven years it enjoyed a comfortable existence in Buchanan until the Texas legislature carved Hood County away from Johnson County in 1867. In search of a newer, more centralized county seat, the county moved the seat once more to Camp Henderson. This area was eventually renamed Cleburne. And like the county’s government, the courthouse itself moved as well. It stood for two years in Cleburne, but was demolished in 1869.

Joseph W. Anderson designed the fourth Johnson County courthouse as a square, two-story, brick building. It served for fourteen years until the population of the county forced a move to a much more spacious building. It was demolished in 1883.

Wesley Clark Dodson, of Waco, was chosen to head the effort for the county’s remarkable fifth courthouse. Over the course of his life, Dodson designed a trio of courthouses in this region of Texas in three different counties that all border one another. His designs form the foundation of Parker County’s in Weatherford, Hood County’s in Granbury, and at one time, Johnson County’s in Cleburne.

This impressive Second Empire design was constructed in 1883 by contractor Lee Slaughter and cost the county $49,685. The bell tower alone was $4,000. Regrettably, the building burned on April 16, 1912 (one day after the Titanic disaster). 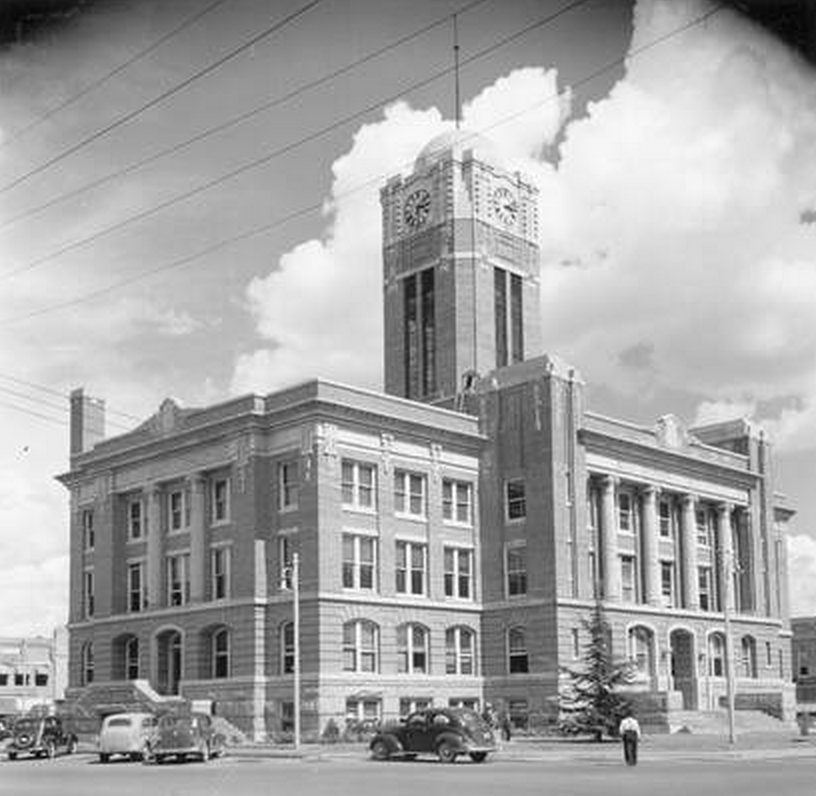 In its place came the sixth and final courthouse in Johnson County’s history. Lang & Witchell, of Dallas, provided the designs and were aided in the process by Charles E. Barglebaugh. Their combination of Classical Revival and Prairie Style elements was built by the American Construction Co.

The Texas Historical Commission offers a lengthy, but fascinating, summary of the courthouse’s architectural heritage:

“The Johnson County Courthouse is a freestanding structure occupying a full block at the heart of the Cleburne commercial district. The structure is essentially rectangular in shape, with the East and West facades representing the longer sides of the rectangle. It is three stories high with a full, raised basement and a square tower rising another five stories. There are generally paired, one-over-one windows; most retain their wooden frames. The roof is flat, except for a hemispherical dome atop the tower. The basement level is clad in Texas pink granite ashlar, while the brickwork of the first floor is rusticated. Second and third floors are faced with smooth Elgin brick, and all four sides have central colonnades with stylized, Giant Order Composite columns. The entablature over the colonnades has an incised inscription: ‘A.D. Johnson County 1912 and symmetrically placed Sullivanesque pendants at the sides and on the tops of the paired east and west faade pylons. The Courthouse is surmounted by an approximately 90′ central clock tower. The first floor of the tower contains courthouse storage and the upper portion of the central atrium, while the bulk of the tower is a hollow shaft. The upper portion of the tower has clocks facing cardinal directions flanked by terra cotta ornamentation in a chain like pattern, which in turn have Sullivanesque pendants below. Unquestionably the most spectacular interior space in the Courthouse is the six-story central atrium. Rising from the basement level, the atrium has Georgia creole marble facing the corner walls and balconies on the first, second and third floors. Rich, Sullivanesque detailing is found along the cornice, architraves and along the chamfered corners. An octagonal art glass skylight crowns the atrium; especially noteworthy are the Lone Star cartouches along the four wider sides. Other interior spaces are more conventional. Most of the hall spaces have Georgia creole marble wainscoting and tile floors.” 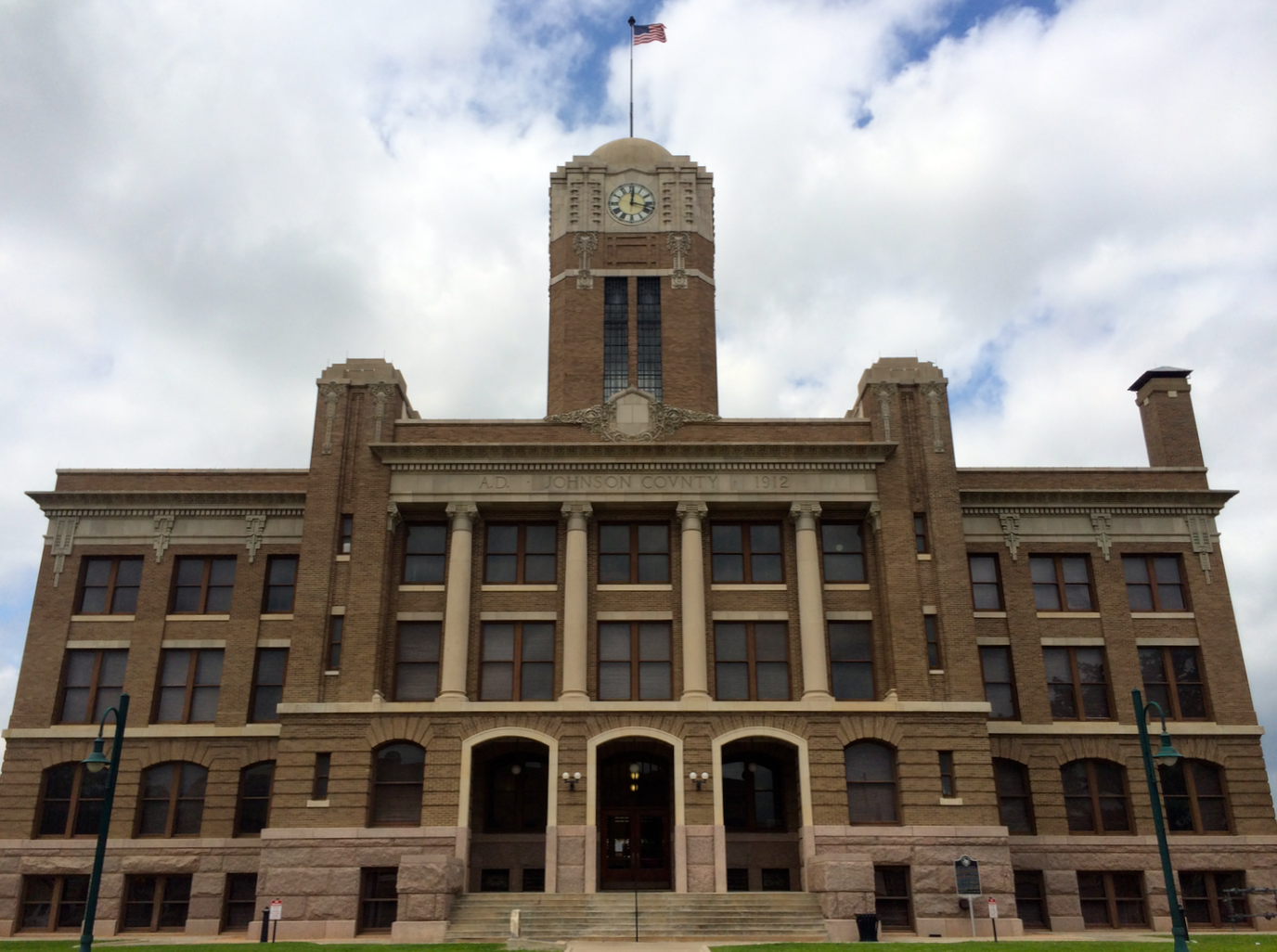 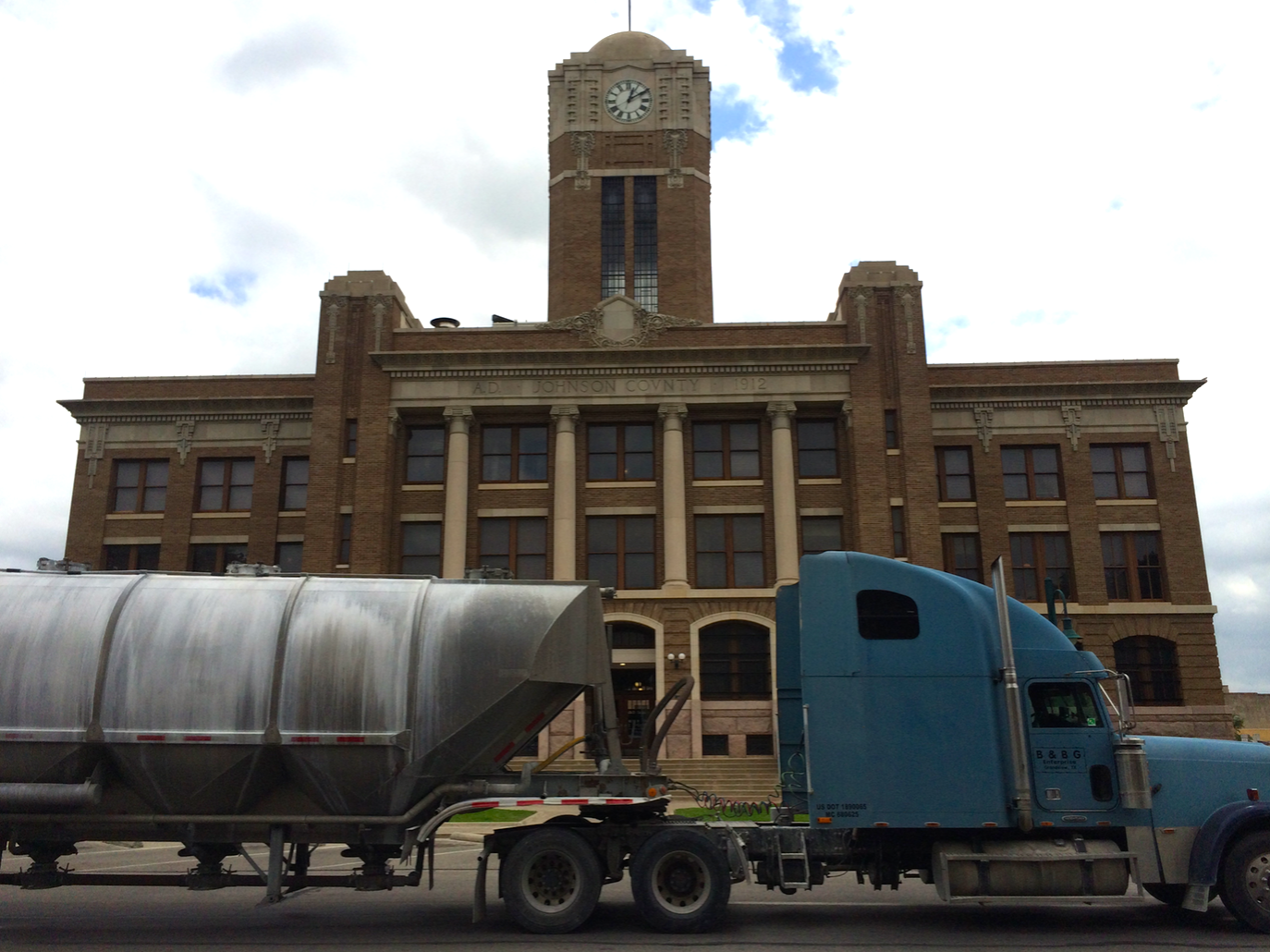 Traffic-wise, this is a very busy area. 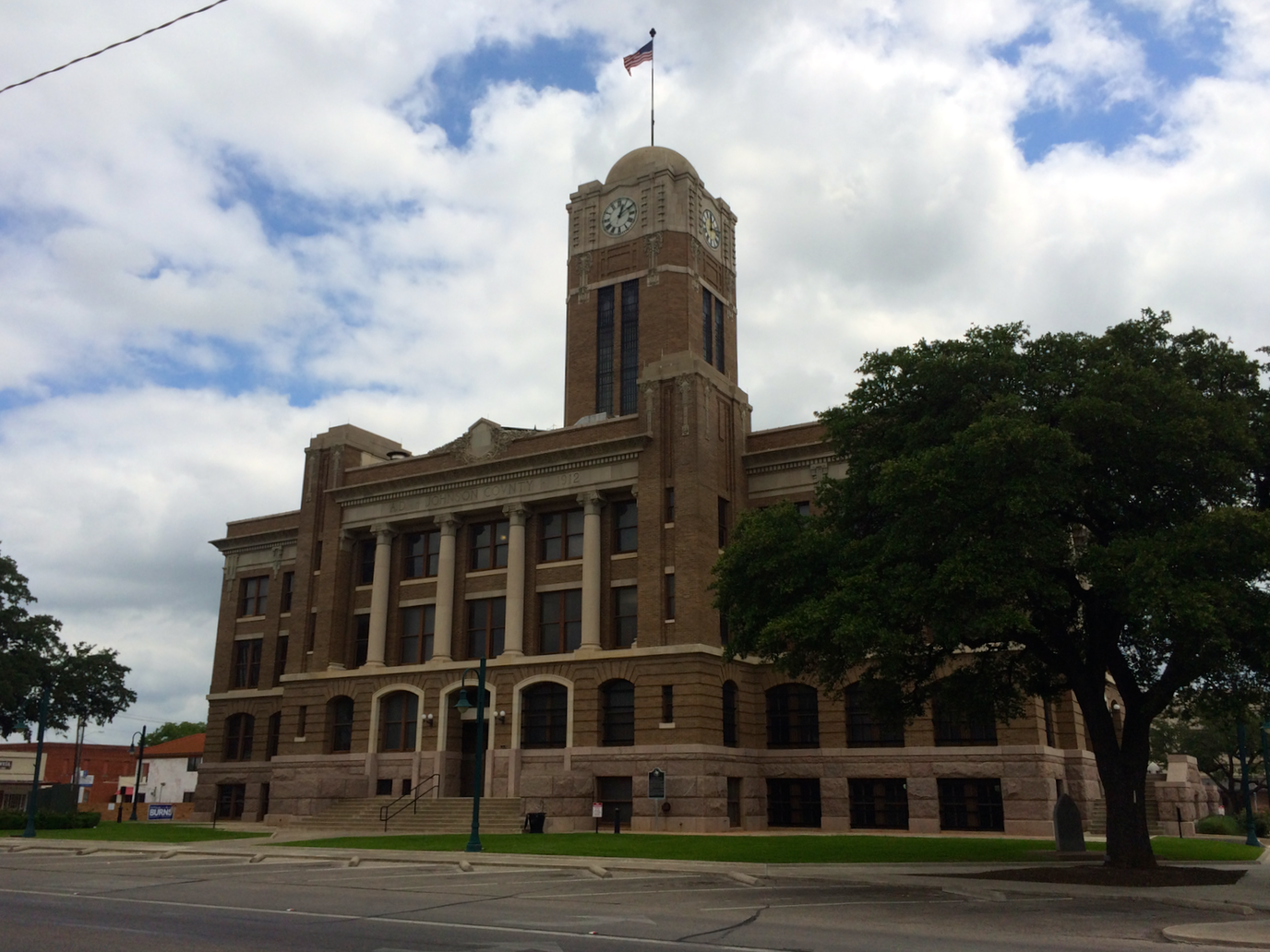 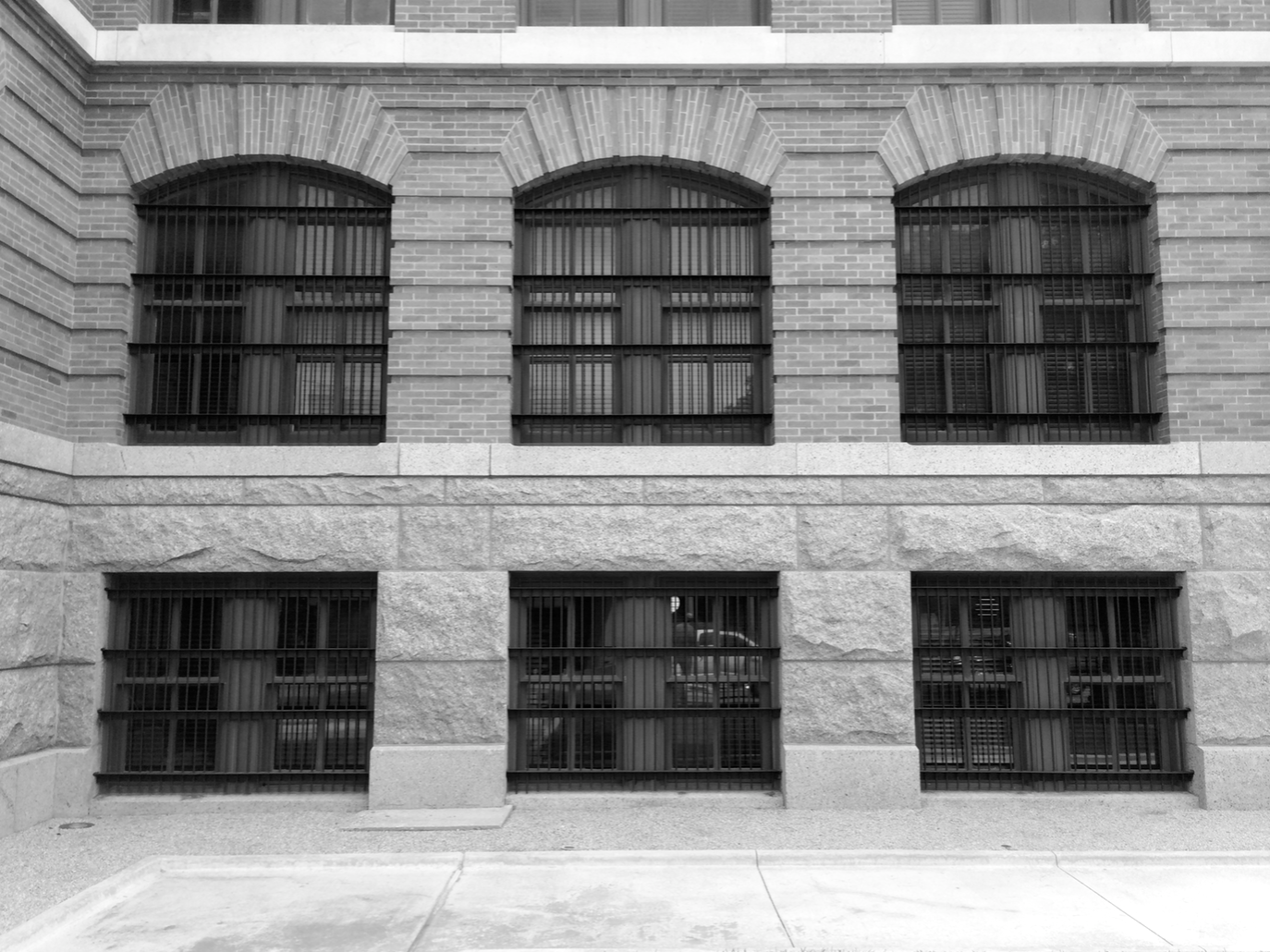 Barred windows on the western side look down into the county records vault. 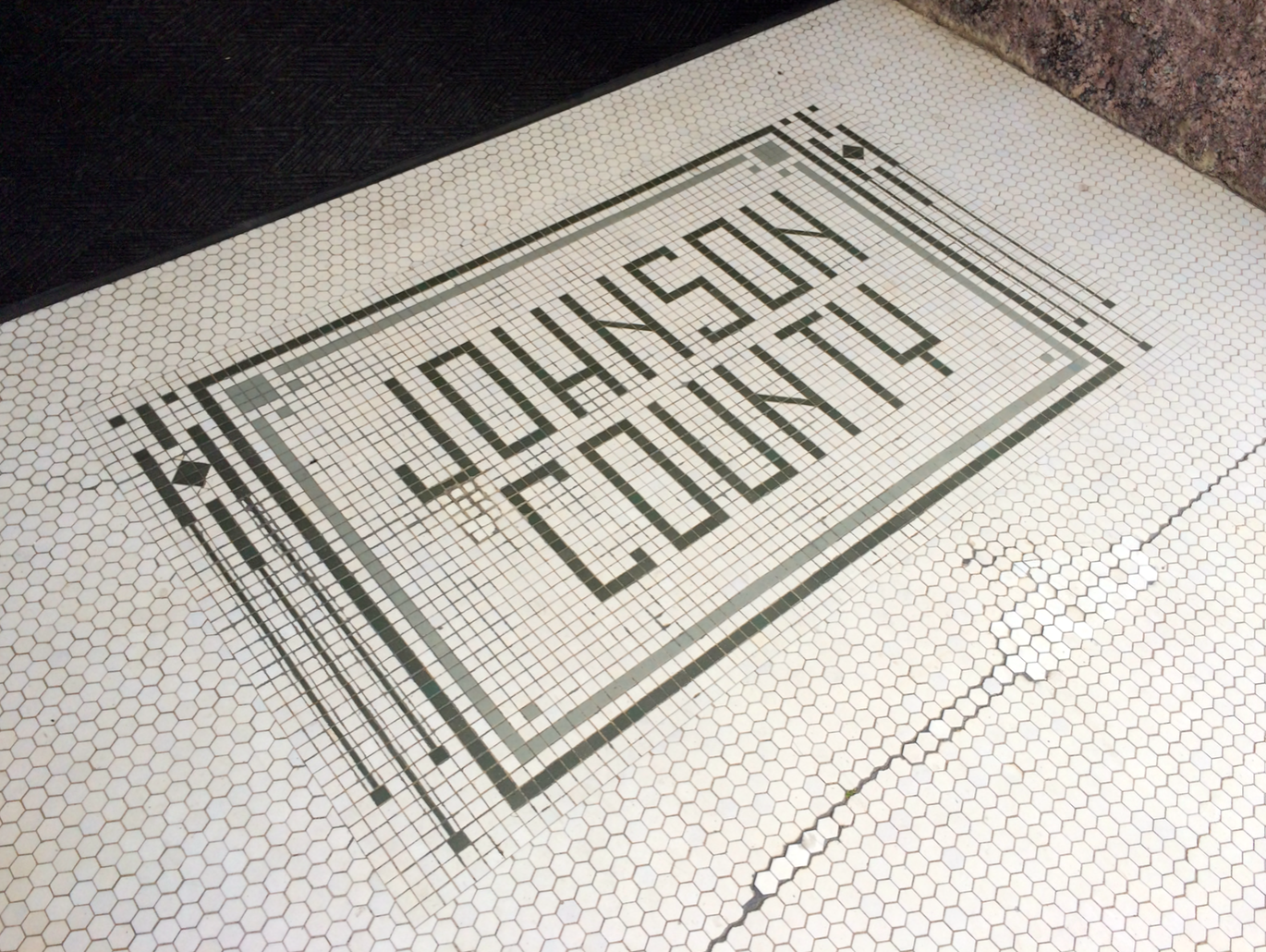 At the western entrance

The Johnson County Annex (inside Community Bank) is across Main Street from the western entrance. 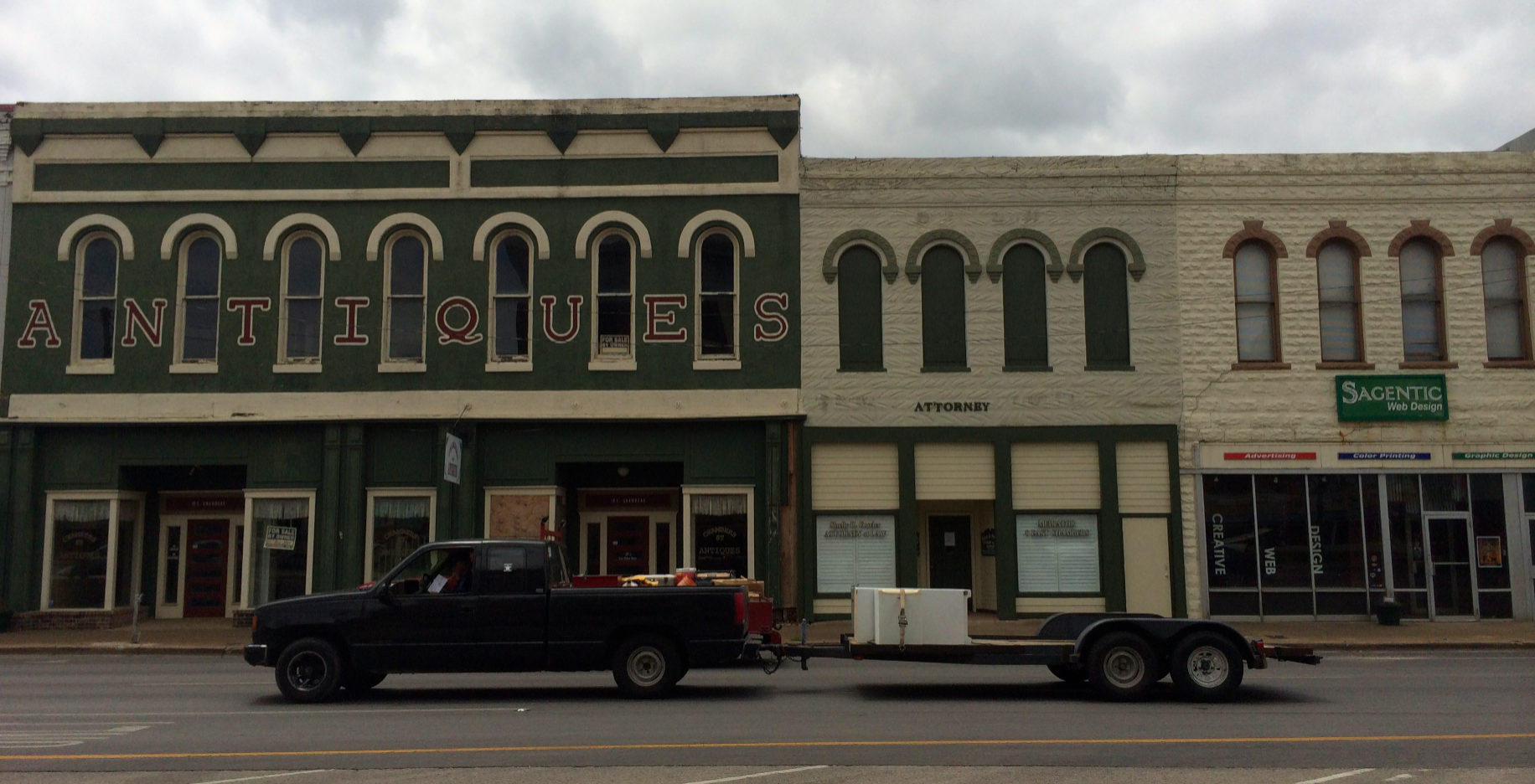 Buildings along Chambers Street (across from the southern façade) 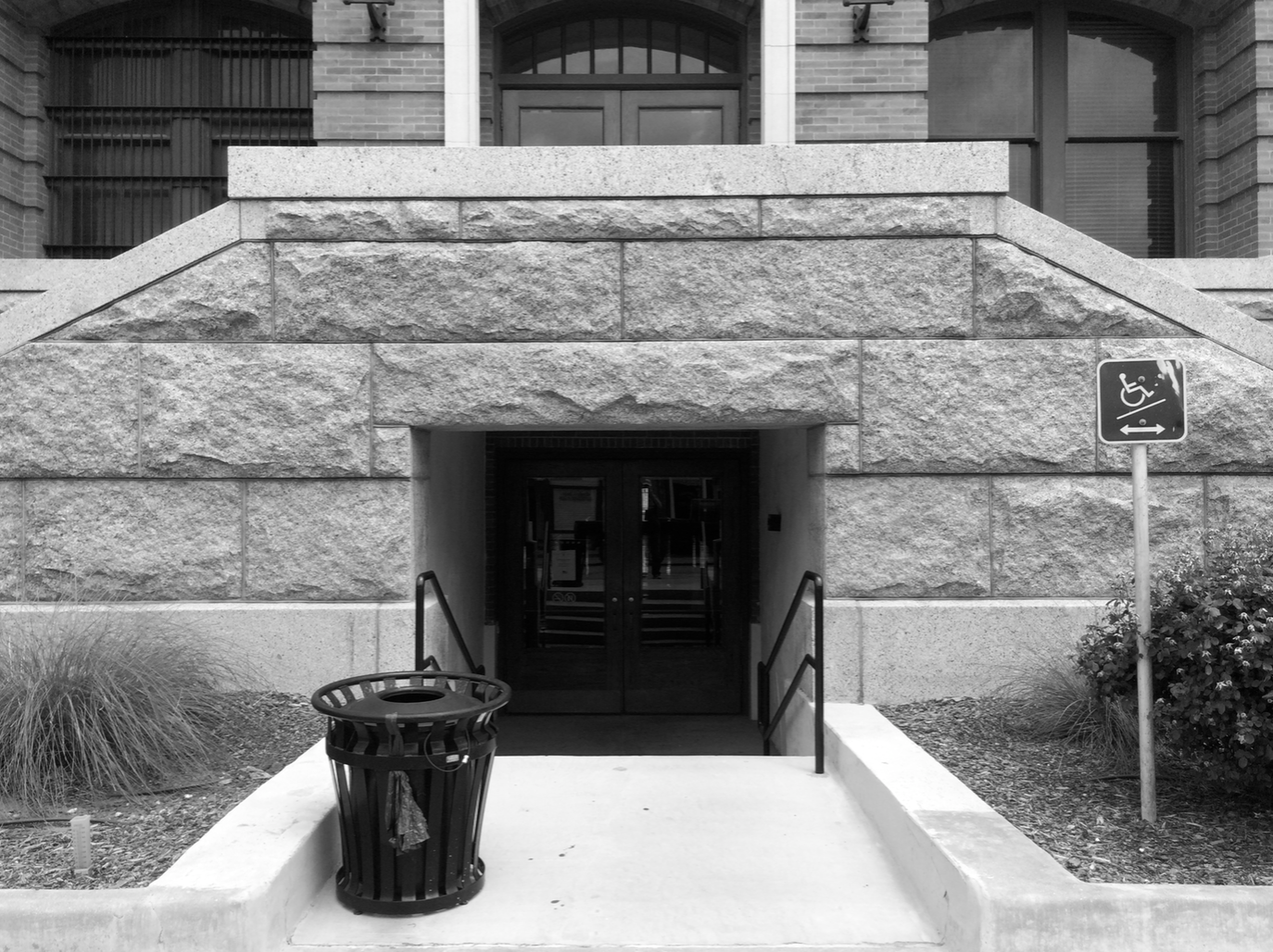 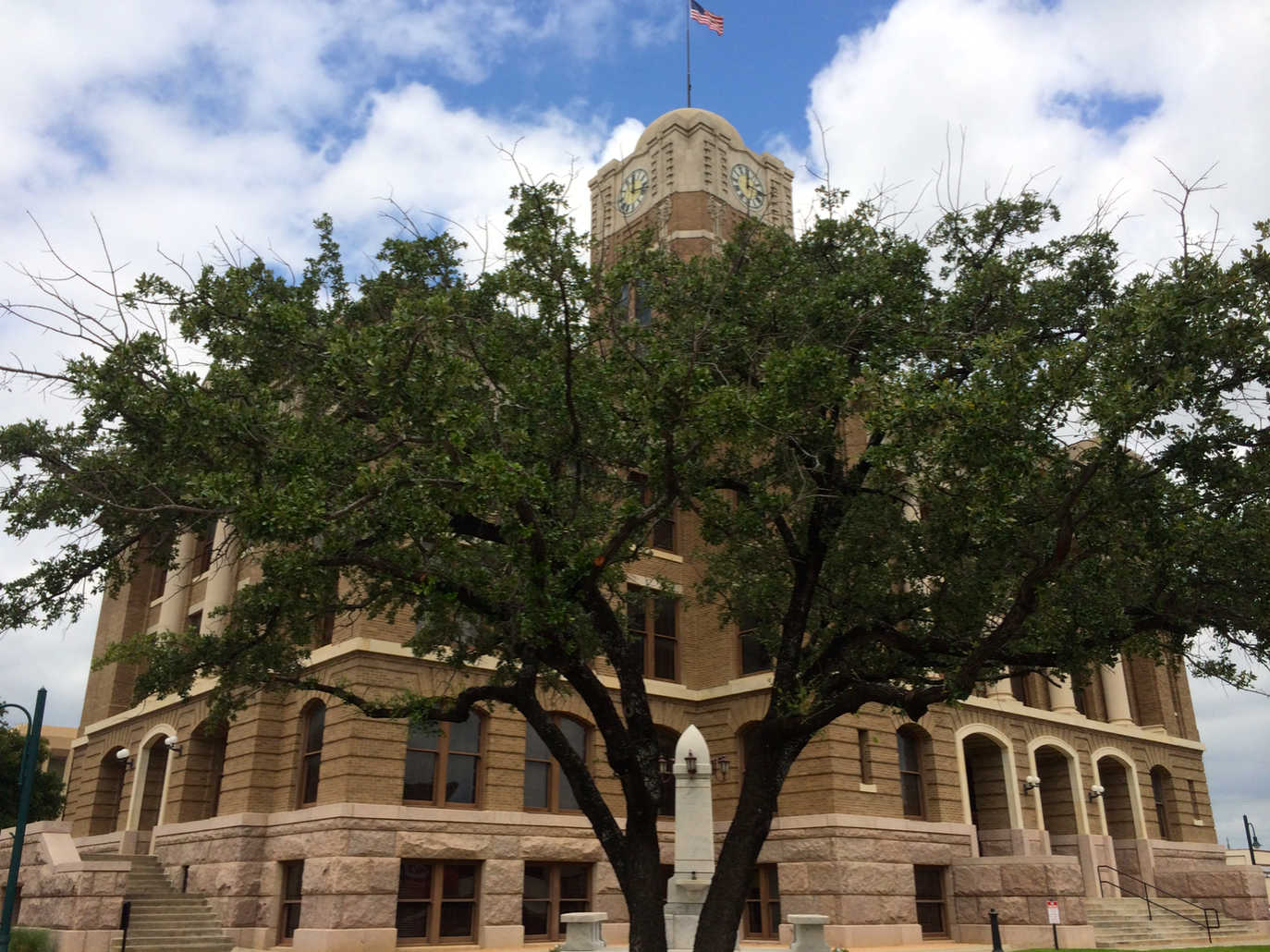 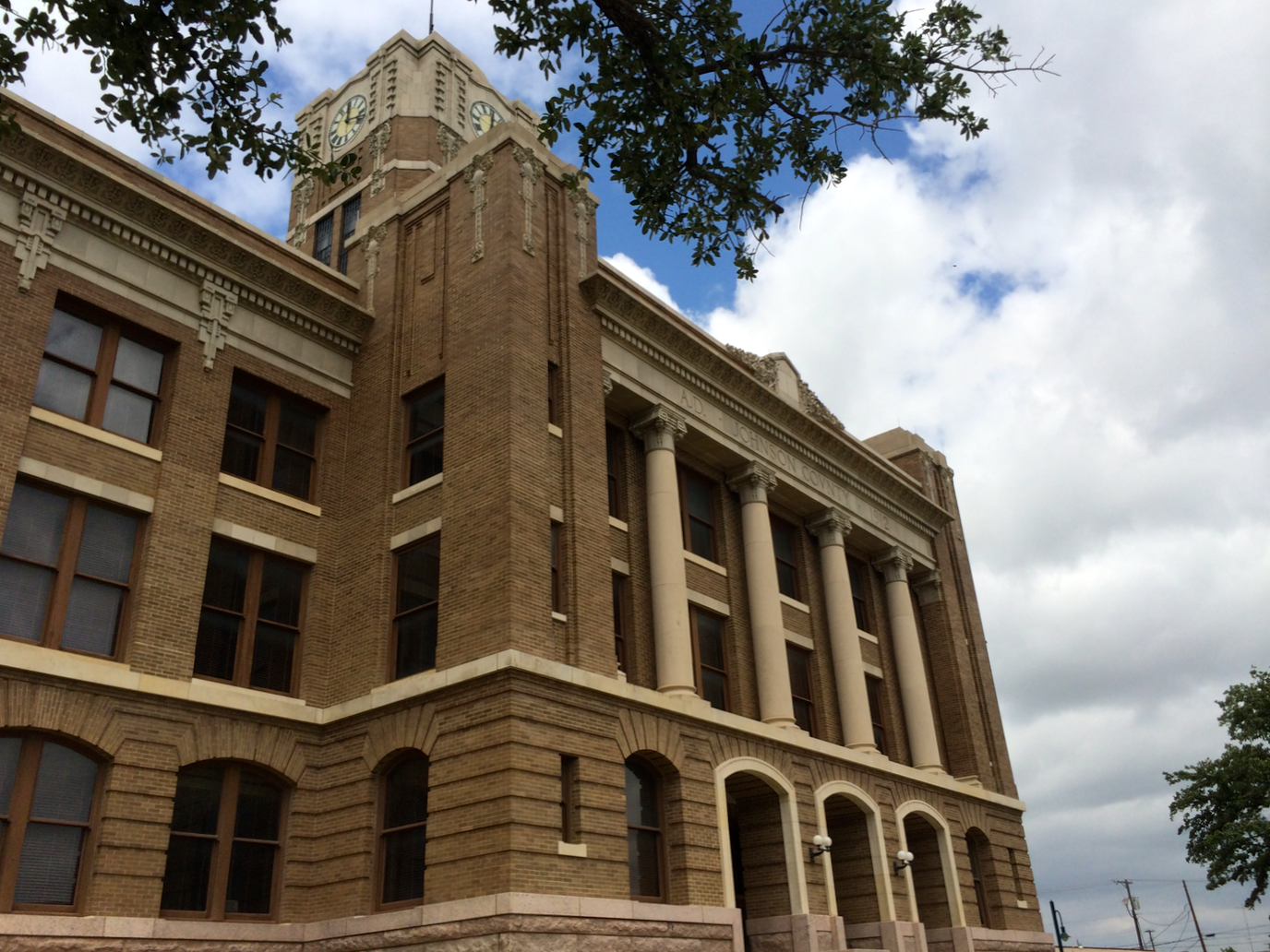 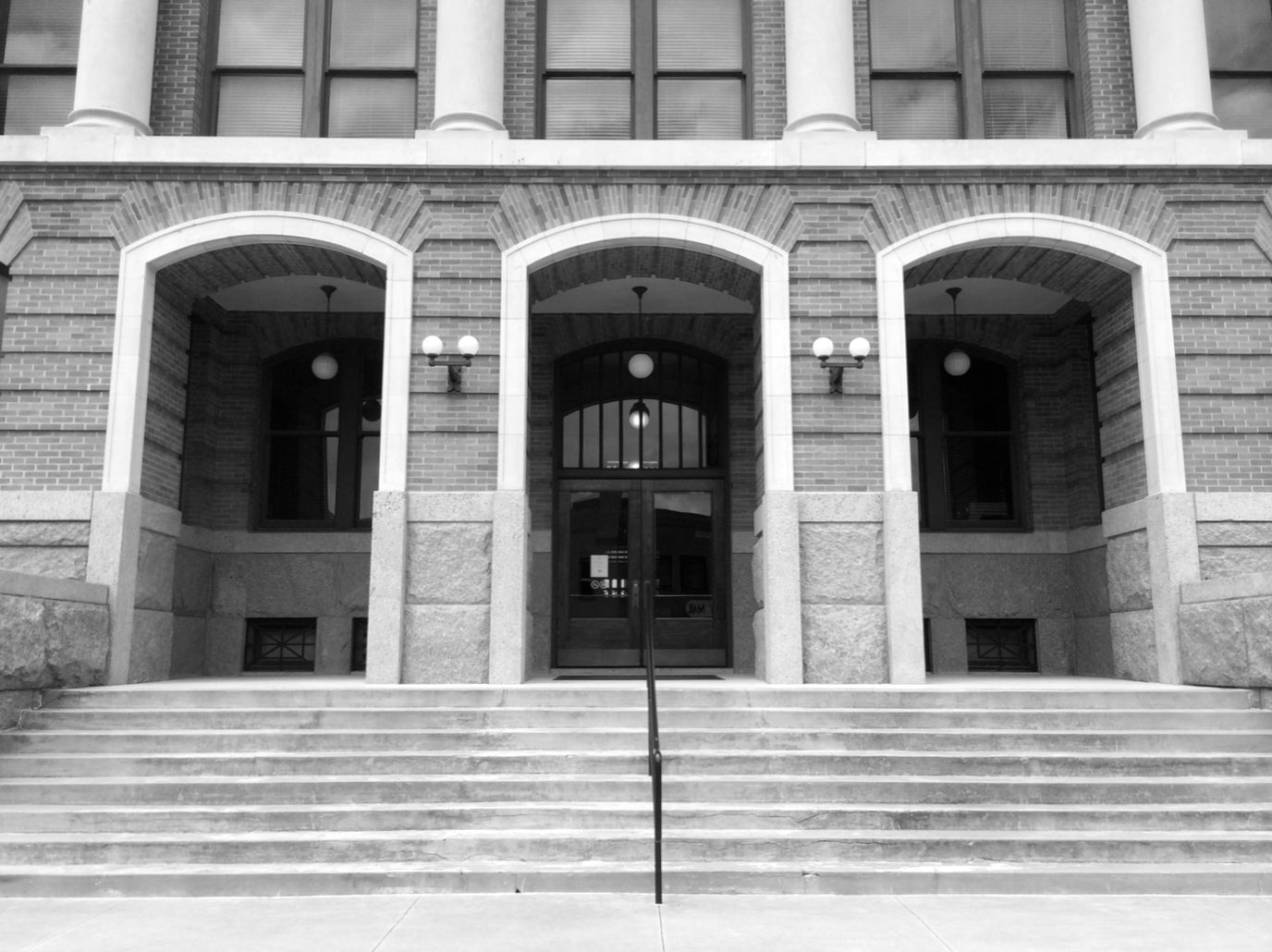 A stone from the 1883 courthouse is preserved on the eastern side of the courthouse lawn. 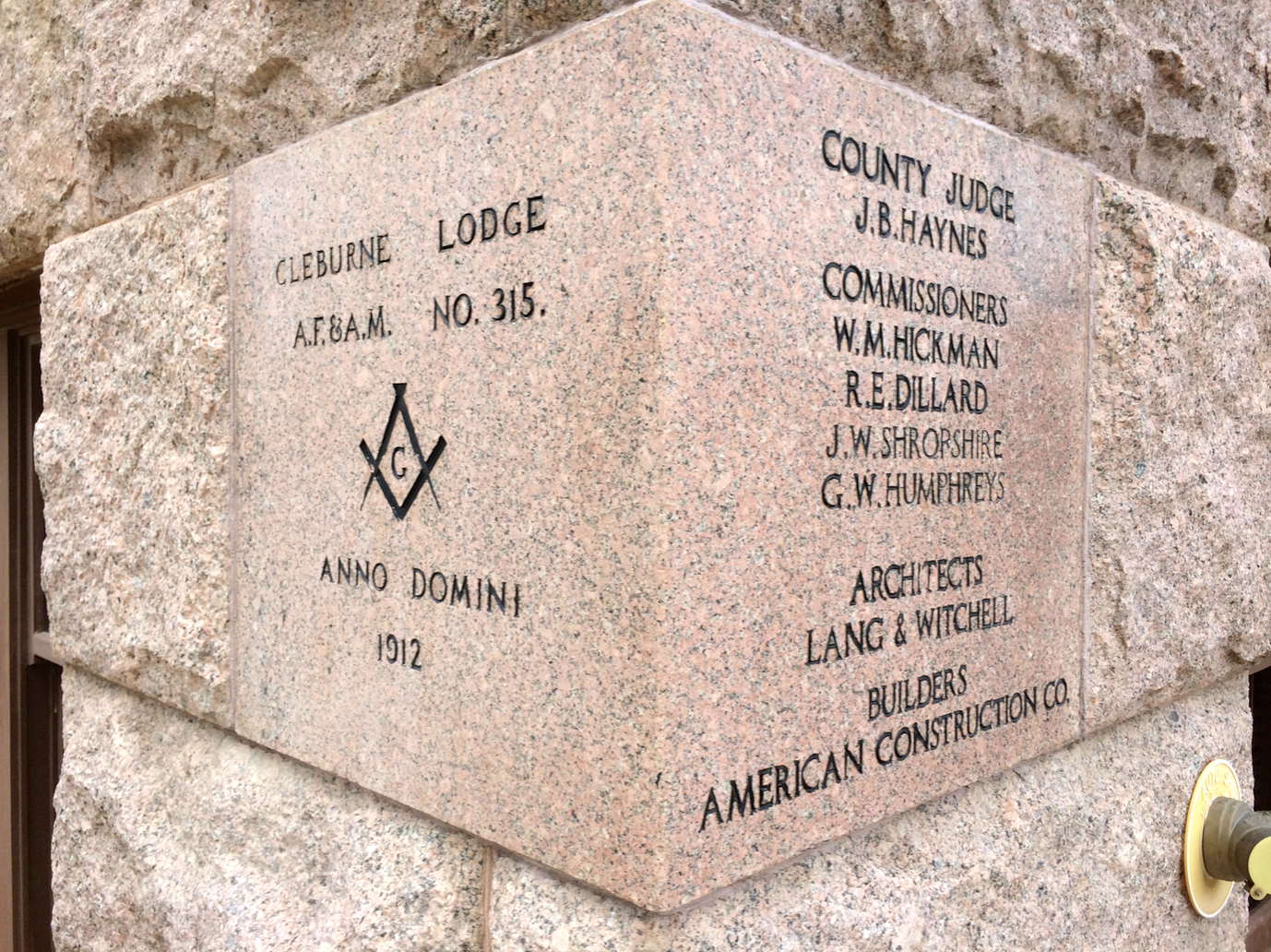 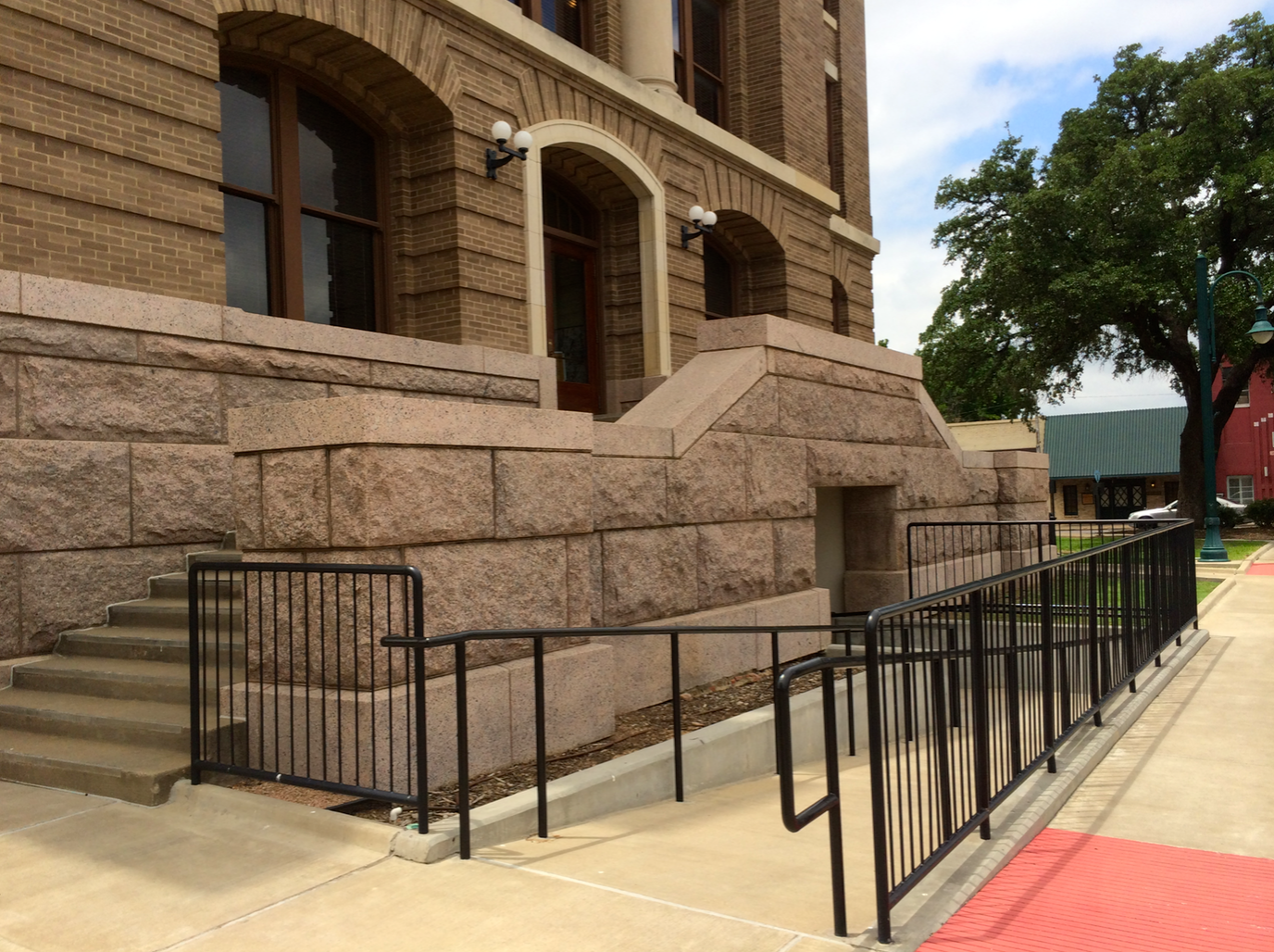 The courthouse handicap ramp is on the northern side. 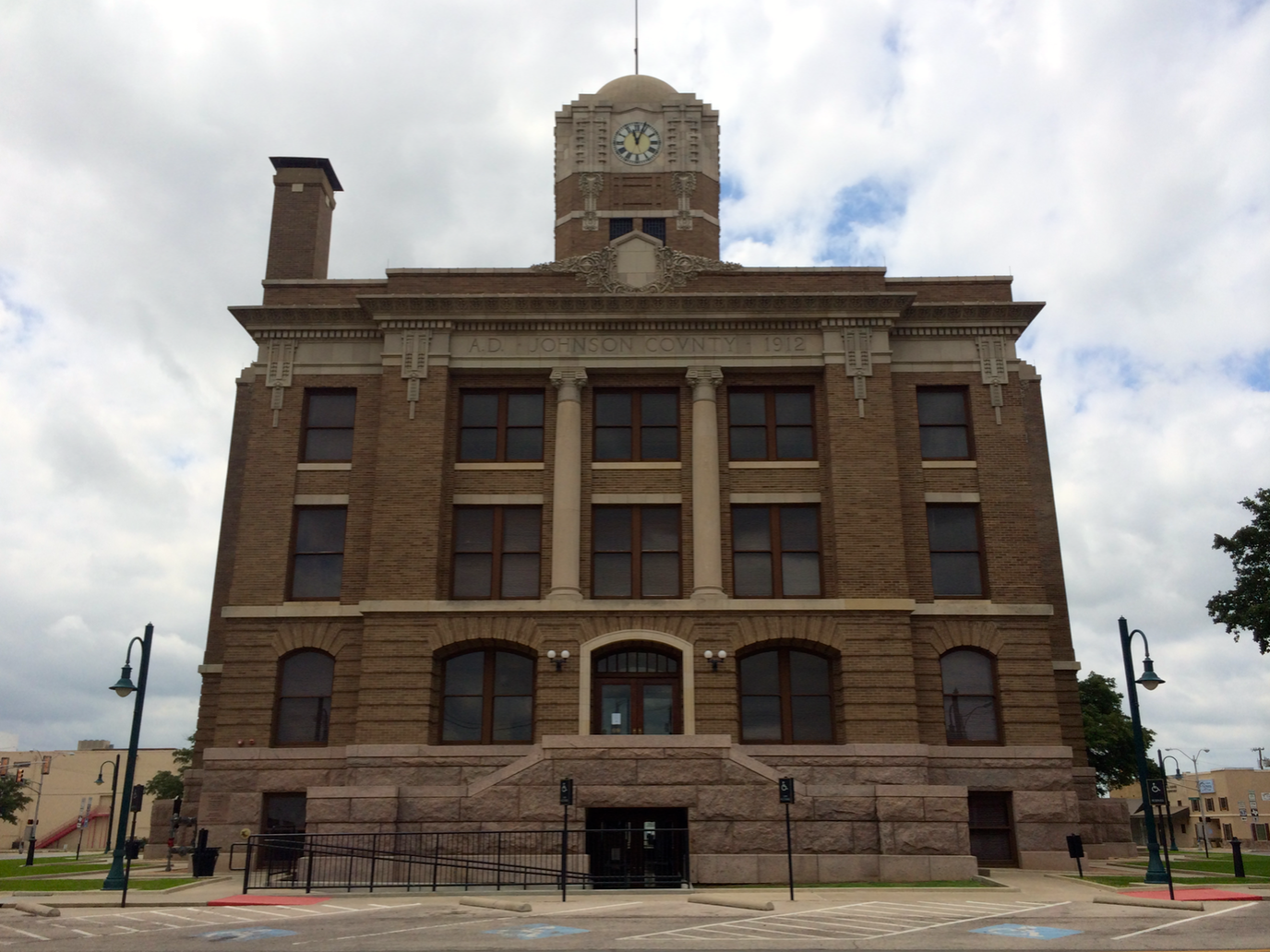 The northern façade, on Henderson Street 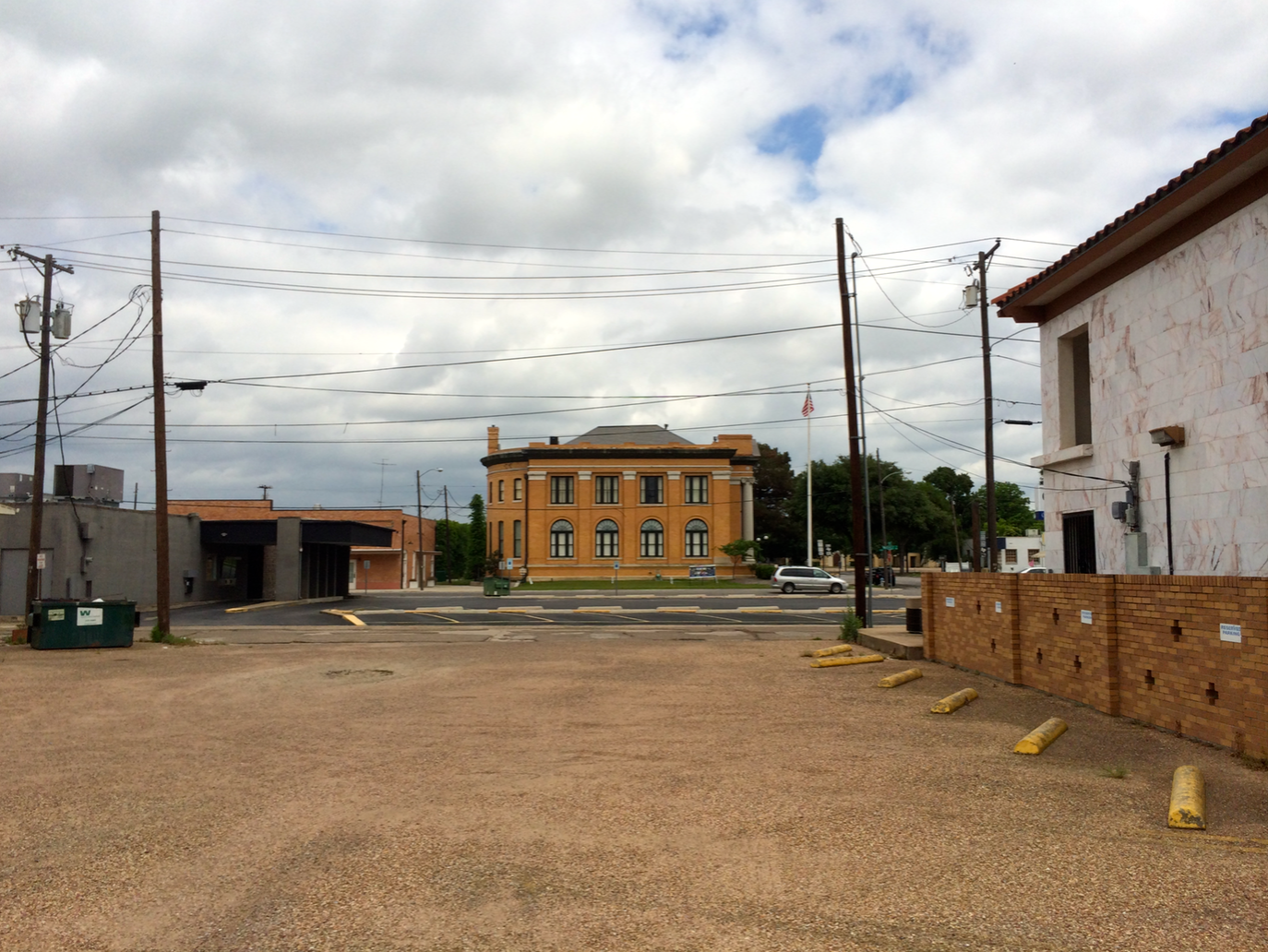 The view from the northern side of the courthouse lawn is of Cleburne’s Carnegie Library. 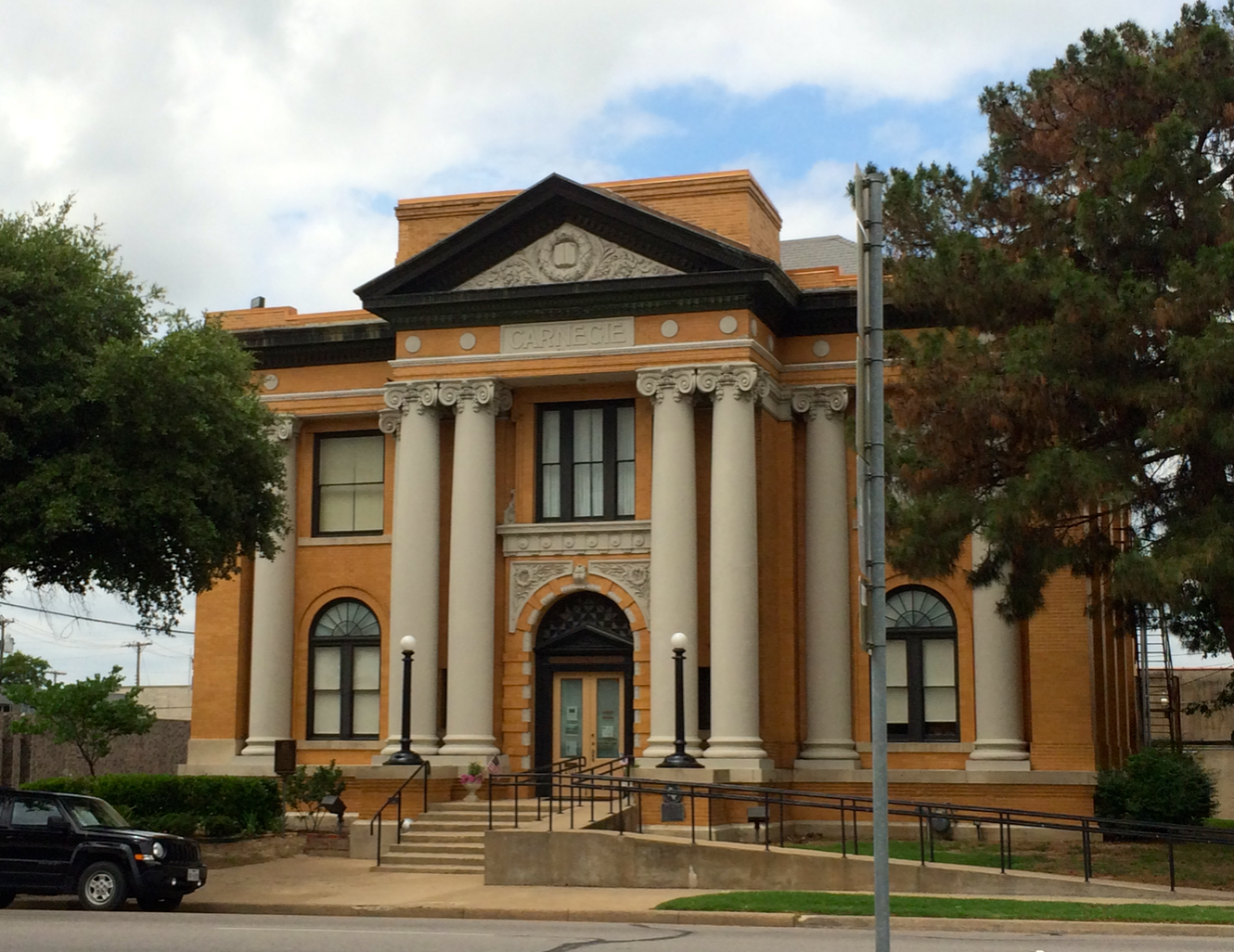 It’s located at the corner of Wardville and Caddo Streets. Today it’s a museum. 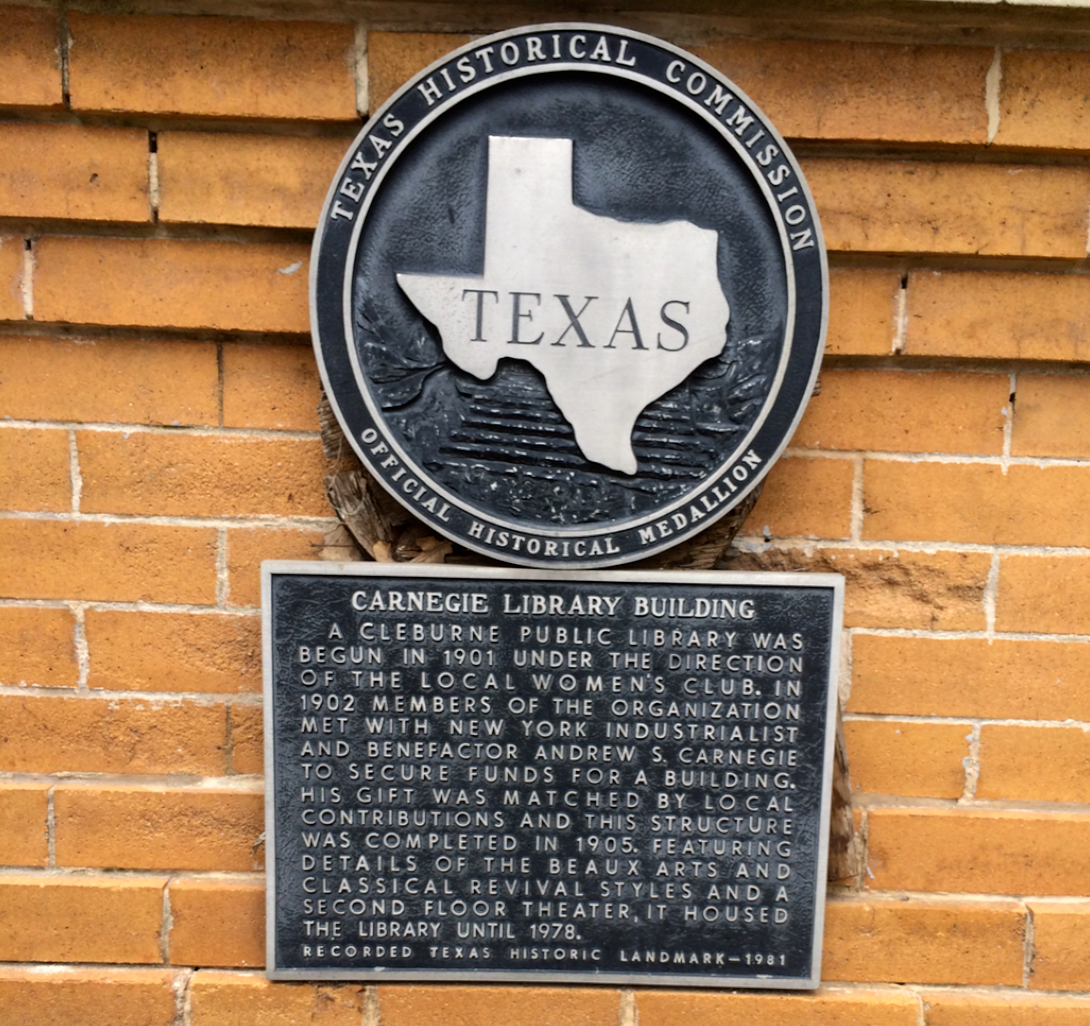 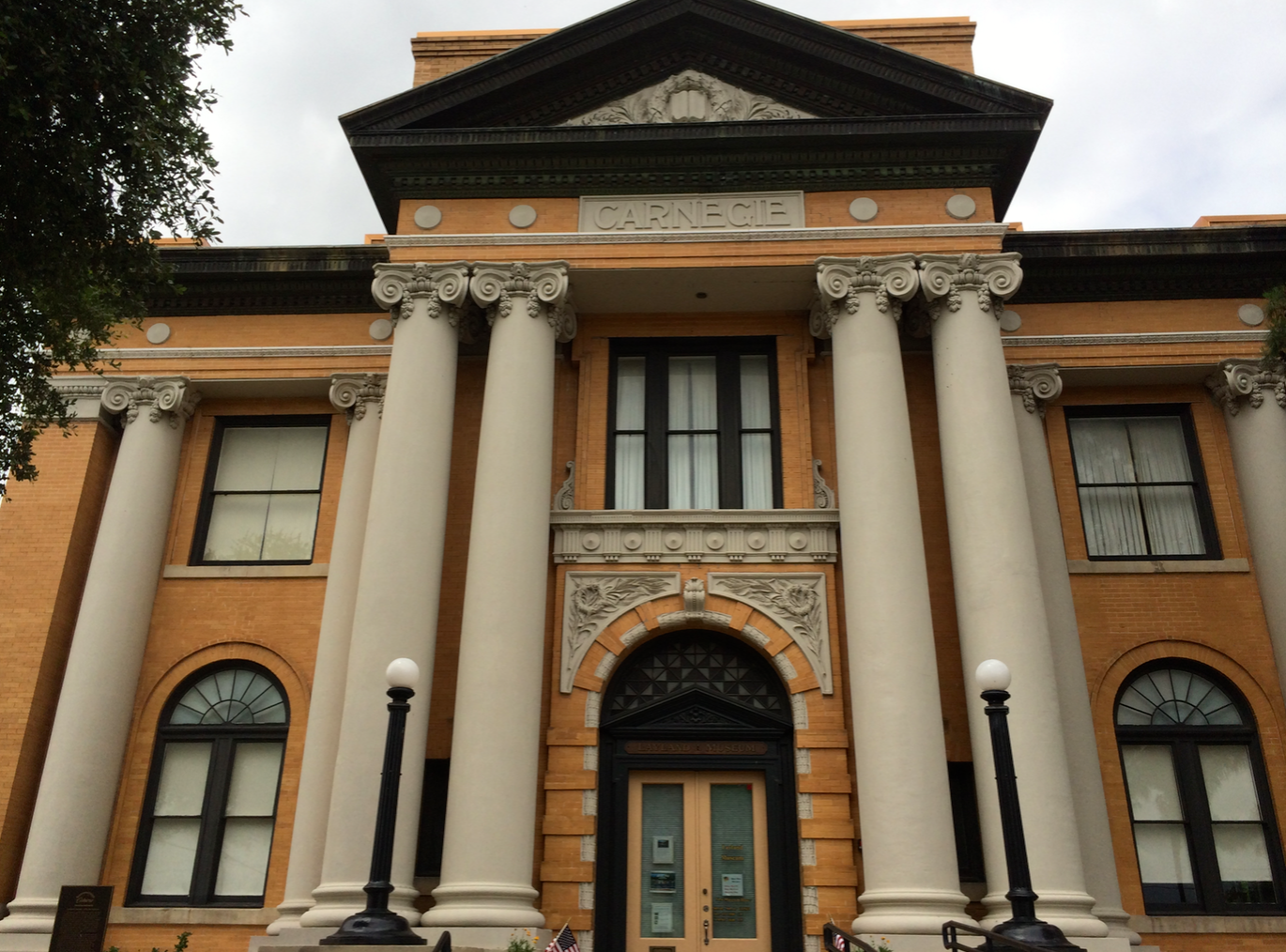 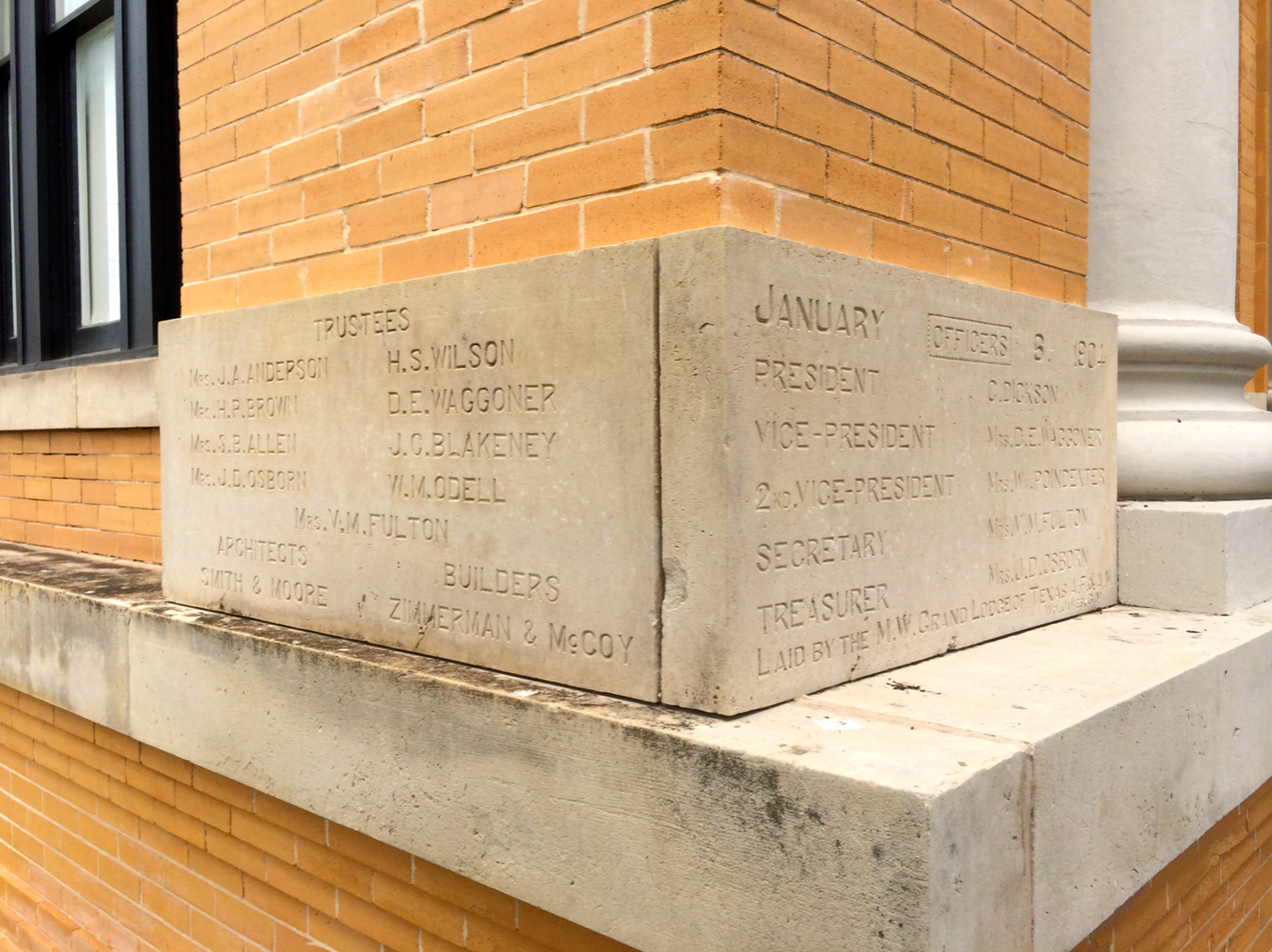