“Robertson County covers 854 square miles of flat to gently rolling terrain, with elevations ranging from 250 to 500 feet. The county is bounded by the Brazos River in the west, the Navasota River in the east, and the Old San Antonio Road in the south. The region is characterized by rich river bottoms, upland prairies, and timberland that supports post oak, black jack oak, cottonwood, elm, pecan, and mesquite trees.”

“[In 1825] Sterling C. Robertson, his cousin Felix Robertson, and several other Tennesseeans representing the Texas Association of Nashville explored the area with the view of eventually colonizing it. On April 15, 1825, Robert Leftwich, acting as agent for the Texas Association, received a contract from the Mexican government to settle 800 families in an area bounded on the south by the Old San Antonio Road, on the north by the Comanche Trace, on the east by the Navasota River, and on the west by the watershed separating the Brazos and Colorado rivers. Leftwich, however, received the grant in his own name and upon his return to Nashville was forced to resign and sell his interest to the investment group.”

“In 1826 Felix Robertson, who served as president of the group, led a party of thirty Tennesseeans to Texas, establishing a camp at the mouth of the Little Brazos. But attempts to colonize the area were stalled by the outbreak of the Fredonian Rebellion and by land claims made by squatters who had moved into the area between 1824 and 1826. In 1827 the Mexican government approved the transfer of Leftwich’s grant to the Texas Association and substituted another member of the group, Hosea H. League, as empresario. Under the new contract the grant boundaries were expanded to include an area second in size only to Stephen F. Austin‘s League subsequently established an office at San Felipe de Austin and awaited the arrival of families recruited to settle in the colony but was implicated as an accomplice in a local murder and jailed.” 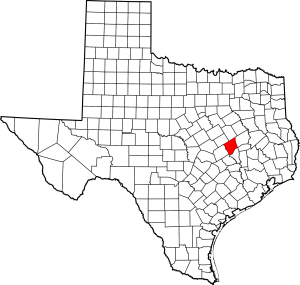 “1831 Stephen F. Austin petitioned the Mexican government for a grant covering the land previously awarded the Texas Association. A new contract issued by Mexican authorities conveyed to Austin and his new partner, Samuel May Williams, the right to colonize the area previously granted to Robertson and his group. Robertson challenged Austin’s action, first in the local courts and later in the Texas legislature. Both the court and legislature sustained Robertson claims, and the government voided the Austin-Williams contract, recognizing the land titles of the Nashville company.”

“Nevertheless the episode began a legal battle to clear land titles in Robertson County that continued until it was finally settled by the Texas Supreme Court in 1847. During the early 1830s Sterling Robertson worked tirelessly to make the project a reality. He made numerous trips to and from Texas, recruiting and escorting settlers to the area. In many instances Robertson put up his own money to finance the venture, which came to be called Robertson’s colony. Despite continued legal battles and other obstacles, small groups of colonists began to gradually settle in the area.”

“December 14, 1837, the First Texas Congress passed a measure establishing Robertson County from portions of Milam, Bexar, and Nacogdoches counties and naming it in honor of Sterling Robertson. When the county was organized the following year, the settlement of Franklin (usually referred to as Old Franklin today to differentiate it from the present county seat also named Franklin), which served as headquarters for surveyors of a land district including present Leon, Freestone, Limestone, Navarro, and other counties, became the county seat. Over the next nine years sixteen counties were carved from its original jurisdiction, and the county only assumed its present limits in 1846.”

“In 1850 the county residents voted to move the county seat from Old Franklin to Wheelock because the town was closer to the most heavily populated areas of the area. Six years later the county seat was once again moved, this time to a new town, Owensville, near the geographical center of the county, where it remained until after the Civil War.”

“The first farms in the county were on the upland prairies, but as the population increased and the Indian threat abated growing numbers of settlers moved into the bottomlands. Between 1835 and 1840 a number of large land owners, including Andrew Cavitt, Liston Purdy, Joseph Webb, and James R. Robertson, established plantations in the Brazos valley. Although cotton was grown as early as 1840, during the decade of 1840s subsistence farming continued to be the rule. But by the early 1850s a thriving plantation economy, based largely on cotton, had begun to emerge. Between 1850 and 1860 the cotton crop increased from 429 to 6,467 bales. The last antebellum decade also witnessed a tripling in corn production, and a five-fold increase in the value of livestock.”

“During Reconstruction blacks, supported by white Republican allies, managed to briefly exercise political power. On July 12, 1870, the Republican-controlled Twelfth Legislature, in a political move to retain Republican political control of local government in Robertson County, voted to relocate the county seat from Owensville to Calvert. But whites gradually regained the upper hand in the early 1870s and over the course of the next decade, using intimidation and occasional force, managed to effectively disenfranchise most of the African-American population.”

“Although a number of towns declined or were abandoned after being bypassed by the railroad, including Wheelock, Owensville, Nashville, Sterling, Staggers Point, Mount Vernon, Little Mississippi, and Port Sullivan, many other communities were founded or began to flourish. In 1878 residents voted to move the county seat to Morgan, on the railroad near the geographical center of the county. When application was made for a post office, the town was renamed Franklin in honor of the original county seat.”

“Over the next three decades both the amount of acreage under cultivation and overall production steadily increased. Cotton, corn, and cattle, which had formed the mainstays of the economy after 1850, continued to be the leading products through the second half of the nineteenth century. But, while agricultural output steadily increased, Robertson County did not escape the hard times experienced by Southern farmers in later nineteenth and early twentieth centuries. Falling cotton prices and depleted soils reduced profits.”

“By 1930 three out every four farmers (2,936 of 4,065) were tenants. The combination of declining yields and tenancy kept many farmers in permanent debt and brought widespread misery. The harsh conditions led to a decline in population after 1900, as a sizeable number of families left to seek better opportunities elsewhere. Between 1900 and 1910 the population of the county fell by more than 4,000, from 31,480 to 27,454.”

“Prosperity began to return by the eve of World War II, when both demand and prices for agricultural products increased. Oil was discovered in the county in 1944, providing additional income for some landowners. Since World War II the agricultural scene has seen marked changes. During the late 1940s and 1950s many farmers continued to emphasize cotton farming, but in the 1960s farming was increasingly replaced by ranching. By the 1970s livestock raising-particularly of beef and dairy cattle, hogs, horses, and poultry-had taken center stage, and for the next two decades the majority of the county’s agricultural income was from livestock and livestock products.”

I was the guest of Franklin and Robertson County on May 4, 2014. 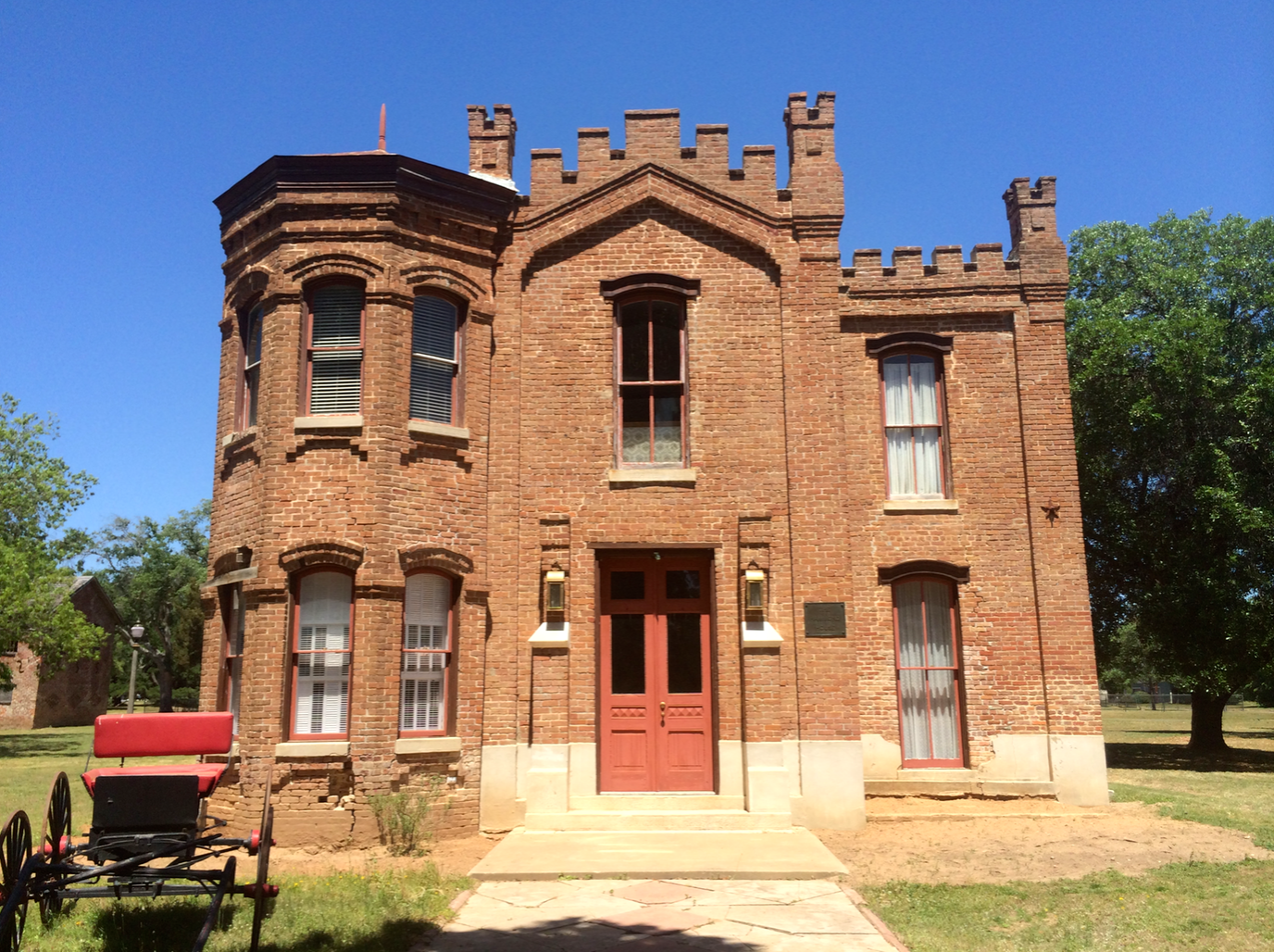 Over the course of history, Robertson County’s seat changed five times. And with nearly every change came a subsequent courthouse in the new center of government. Old Franklin had one in 1837, Wheelock gained one in 1850, Owensville constructed one in 1856, and Morgan (later renamed Franklin) saw the advent of the current courthouse in 1882.

After Owensville lost the county seat title, the city of Calvert adopted it. This was part of remarkable effort by post-Civil War black county leaders intending to assert their political power in a racially divided Robertson County. Calvert was a key place to base a government because the Houston and Texas Central Railway had, in 1868, included it on its line through the area.

For nine years Calvert served as seat, and in that time, county clerk’s offices were based in a house rented by the county for fifty dollars a month, while a downtown building’s second floor was utilized for other government purposes. But no courthouse was ever built.

There was, on the other hand, a jail building constructed in 1875 that had the bearings of a courthouse. And judging by the historical marker in front of the building today, it seems to have confused a lot of people. I understand this “courthouse” never actually served as a courthouse and has simply been inappropriately described as such in some historical records.

I photographed it all the same. 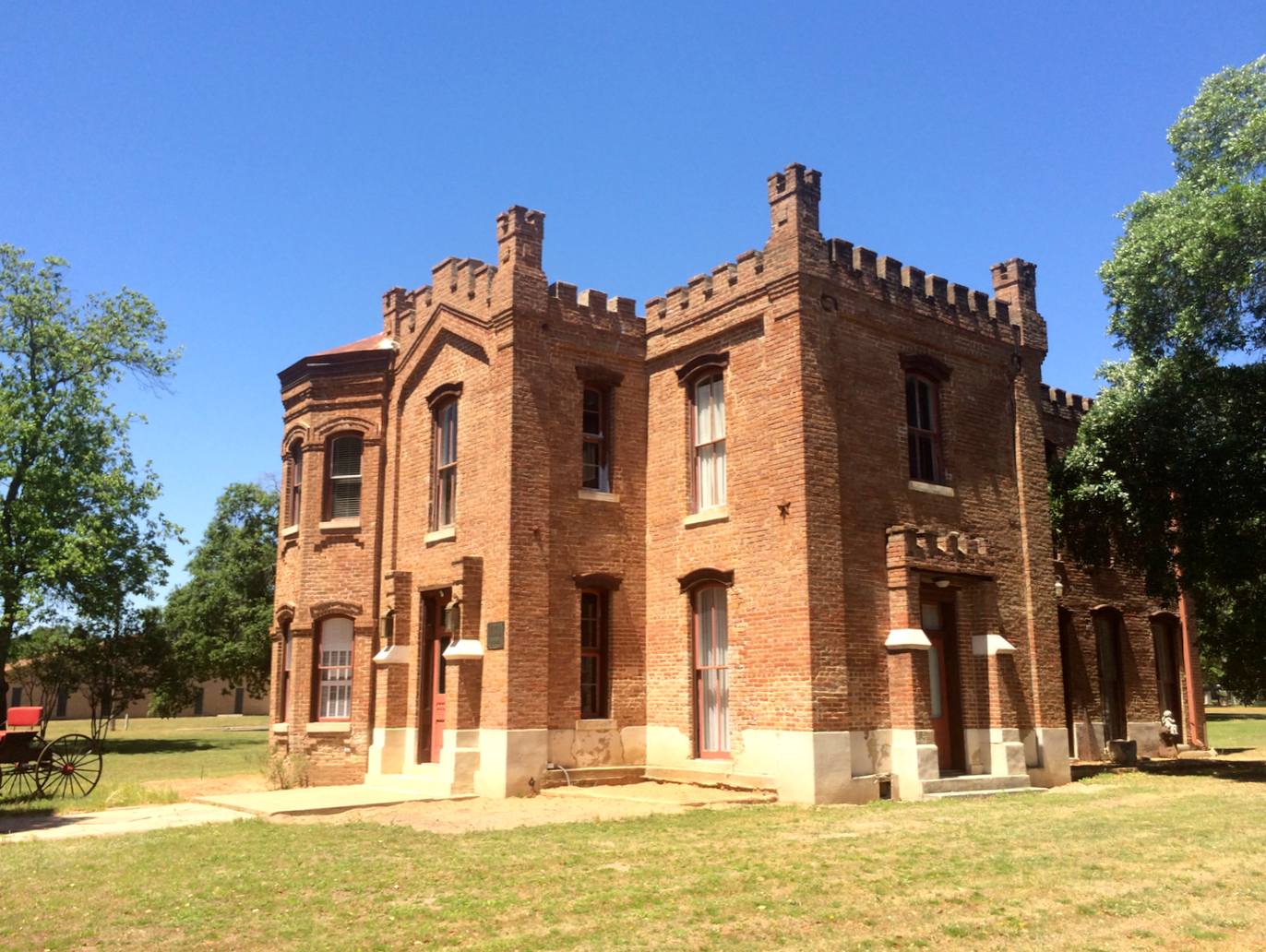 It was designed by W.T. Ingraham.

Today, it’s privately owned and functions as a museum. 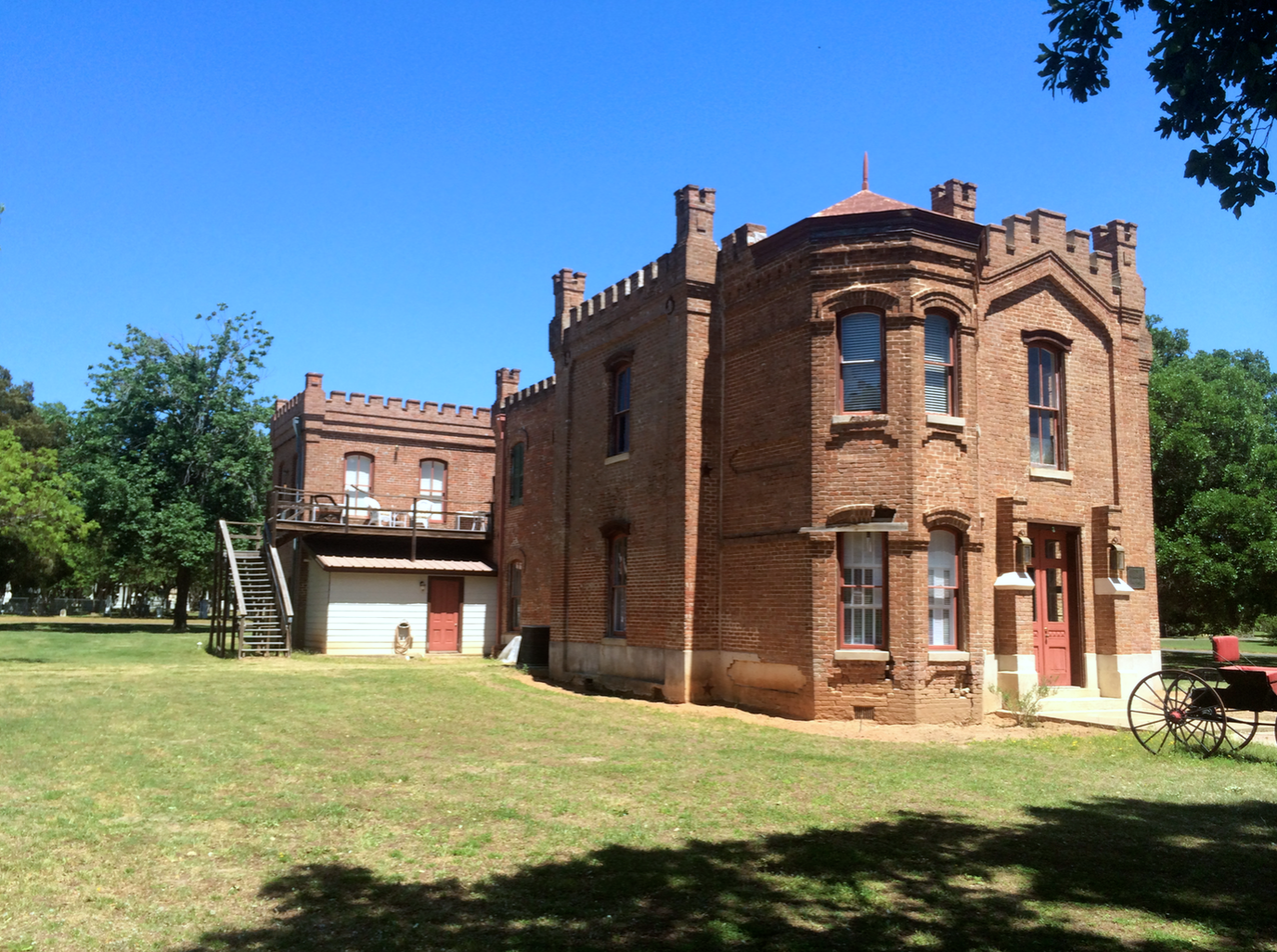 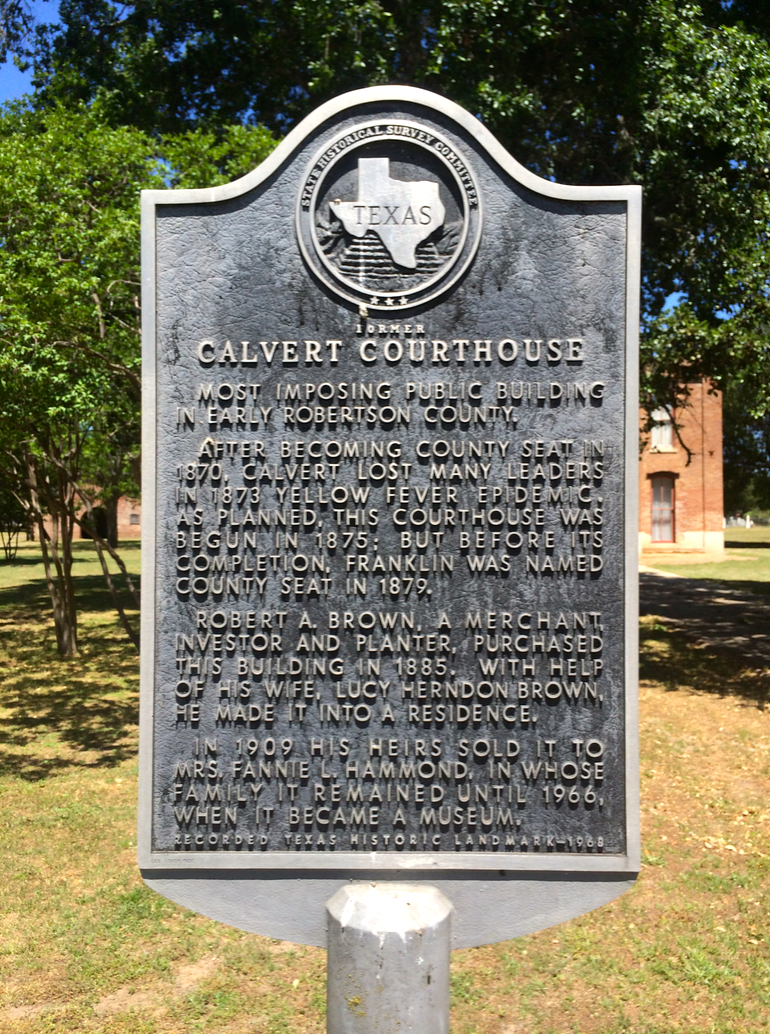 Whether actual courthouse or not, I guess we’ll never know. 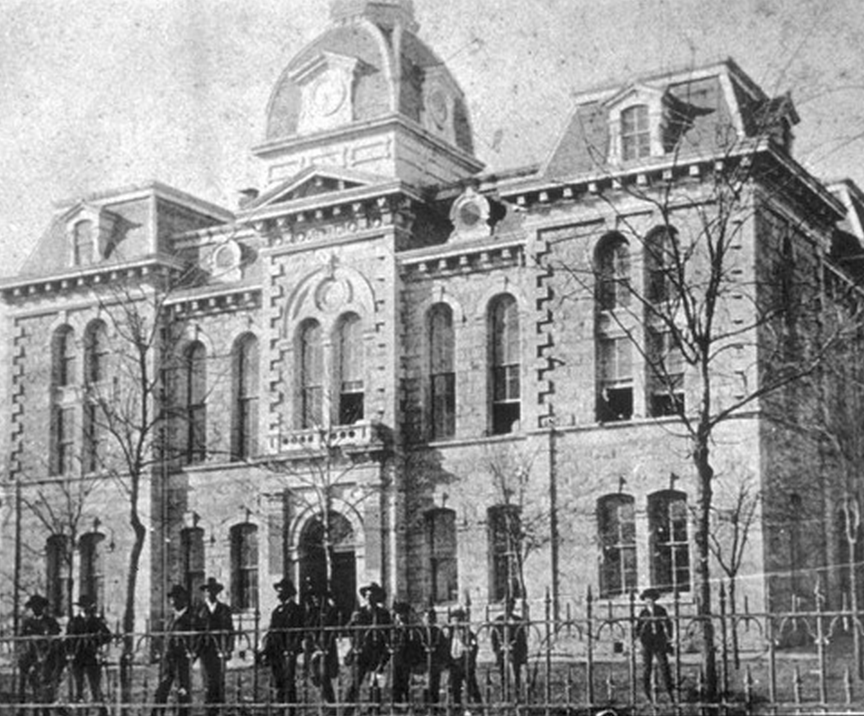 F.E. Ruffini was the mastermind of Robertson County’s fourth courthouse and his imposing Second Empire style was brought to life by contractor James B. Smith. According to the Texas Historical Commission, this was a:

“3-story limestone structure with segmentally-arched windows on the 1st floor and windows on the 2nd and 3rd floors set into tall, 2-story round-arched openings. The building also features 1-story porches, quoins, and a mission-influenced roof parapet.”

Between 1923 and 1924, a remodeling effort was undertaken that removed the courthouse’s Mansard roofs and clock cupola. In their place came Mission style parapets and an awning skirt, designed by Hix McCanless. A second, interior-only remodel was completed in 1980. 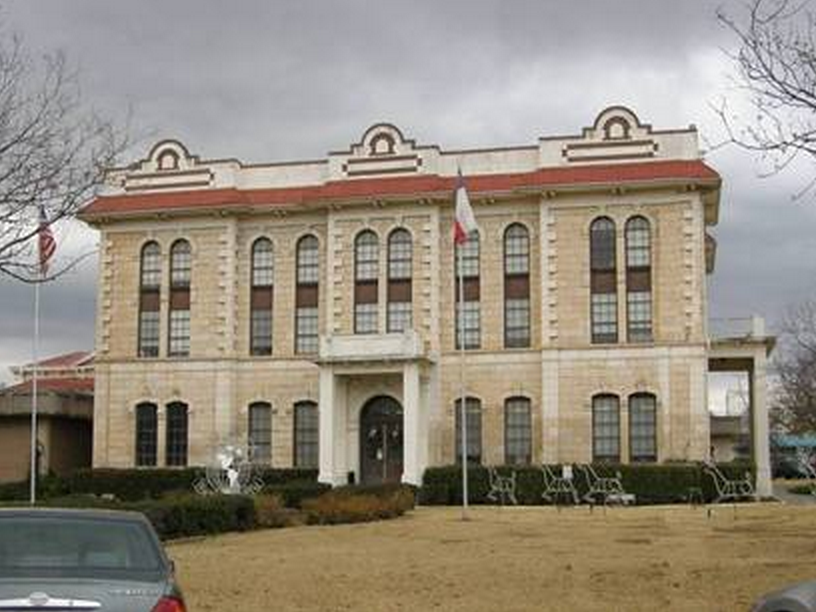 ‘Modern annexes from the 1970s were demolished in 2009, and a newer, more historically-appropriate annex was completed in 2011. The entire courthouse was restored to its 1882 appearance by the Texas Historical Commission between 2009 and 2014. I arrived just as the finishing touches were being applied. 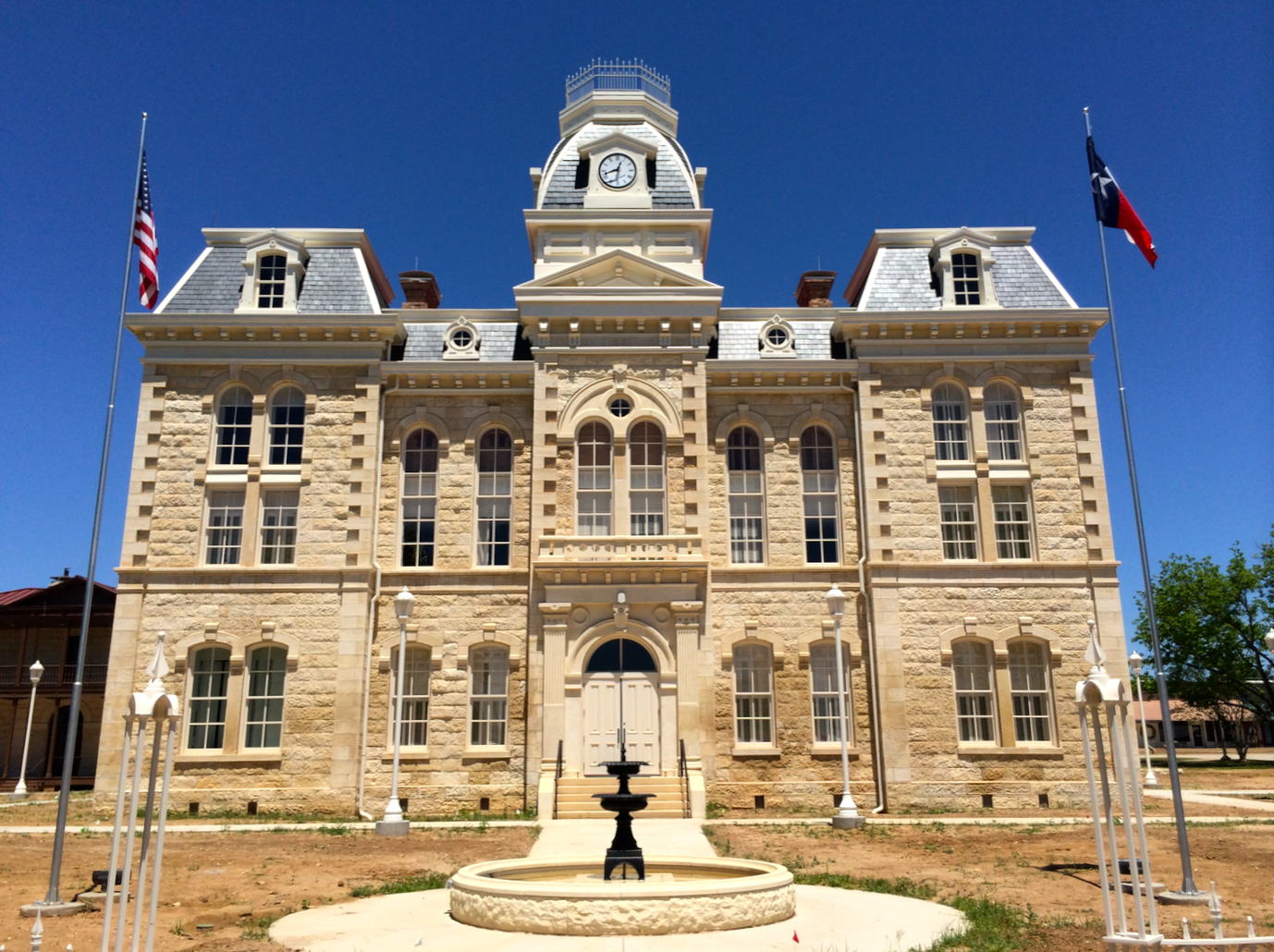 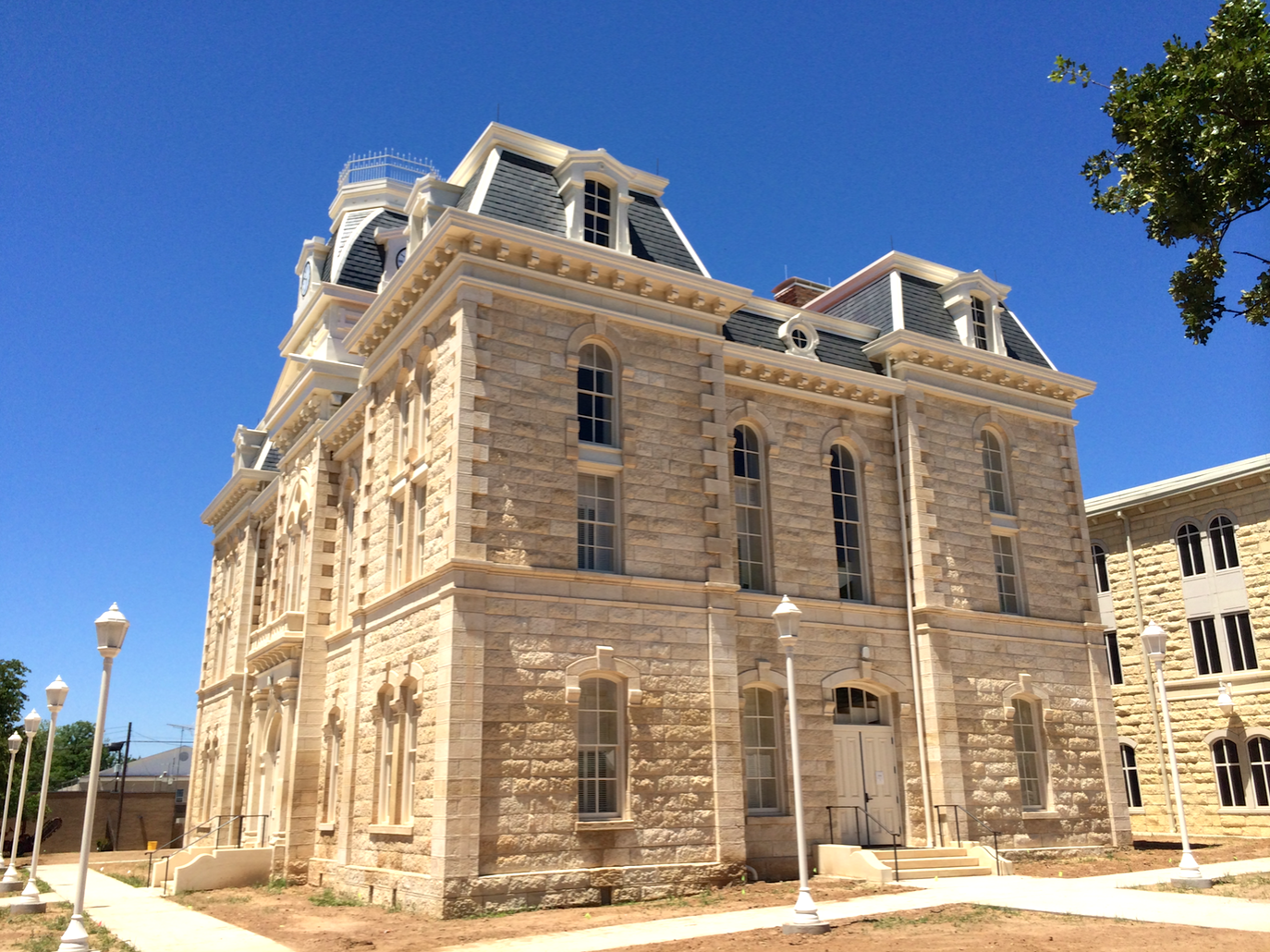 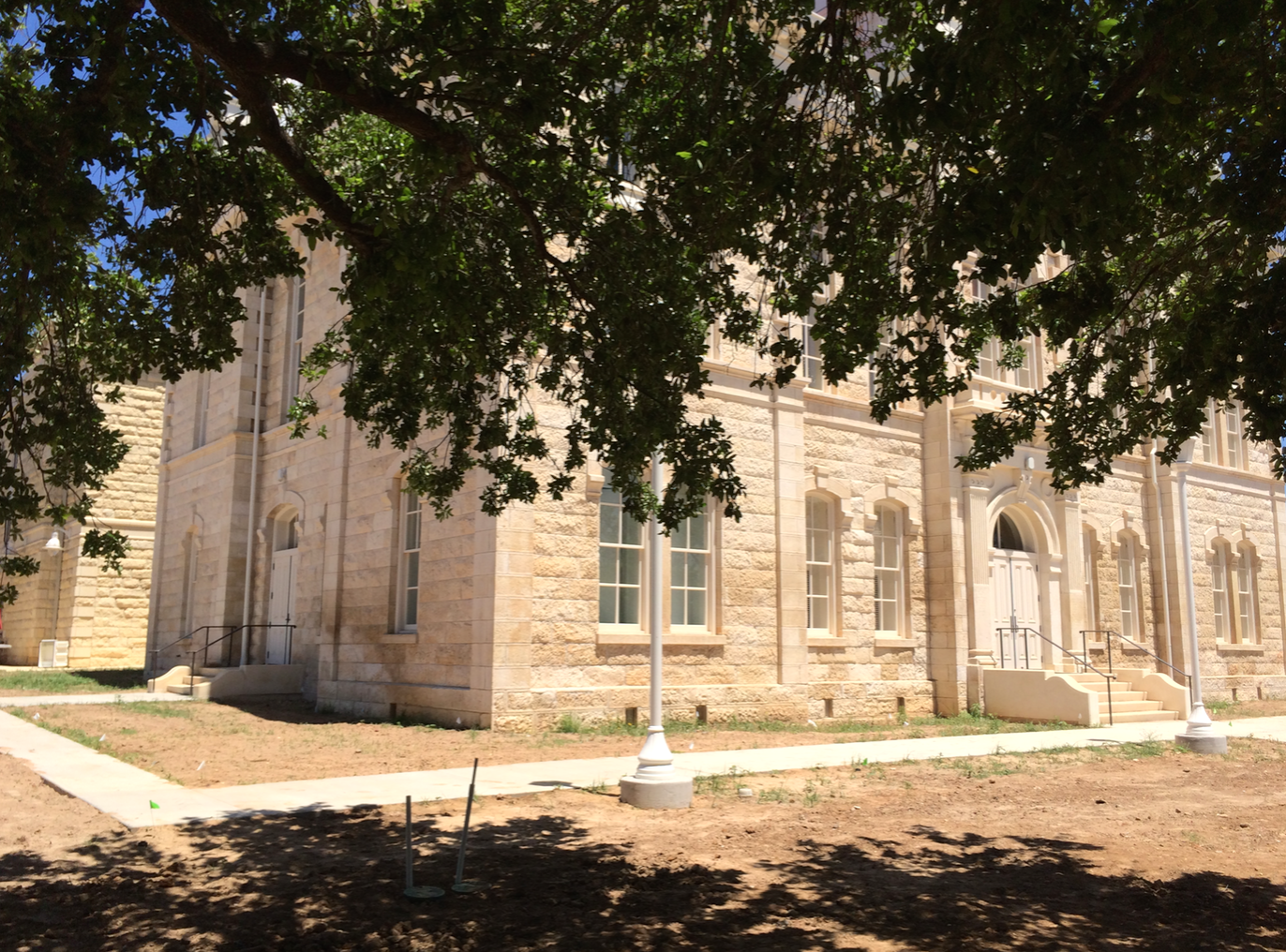 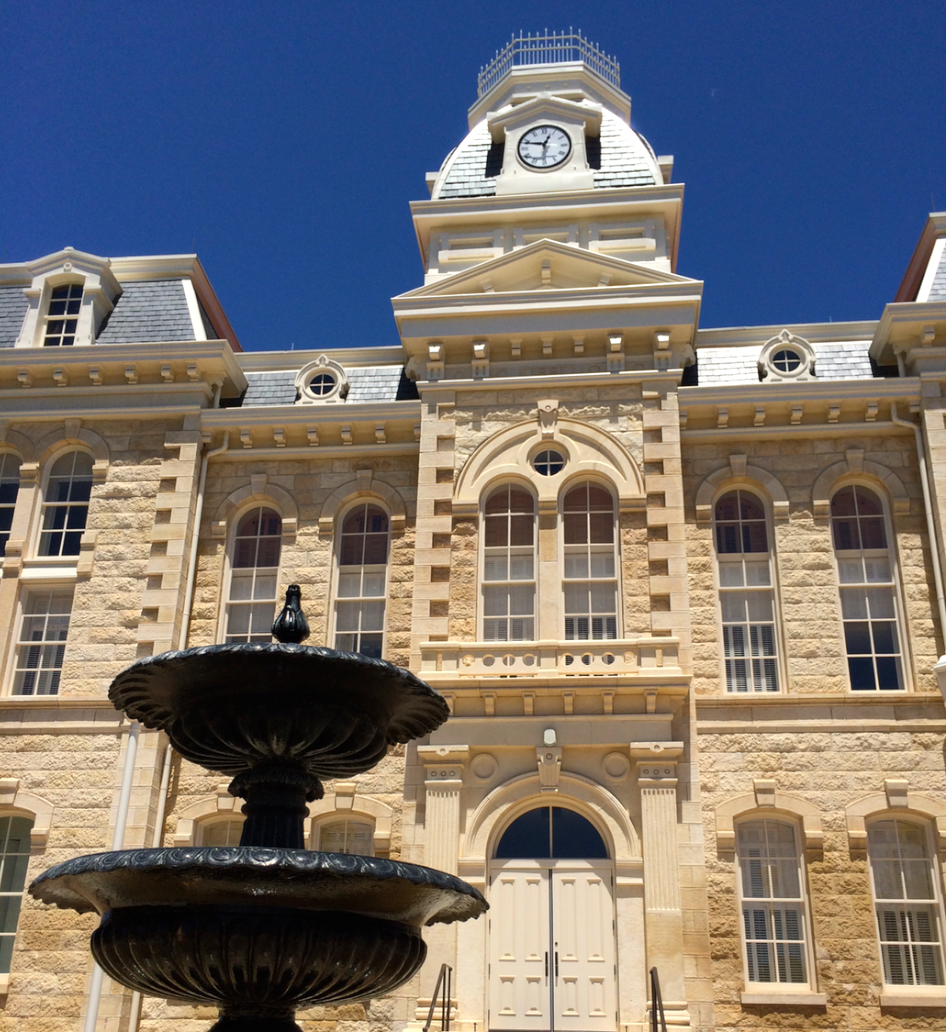 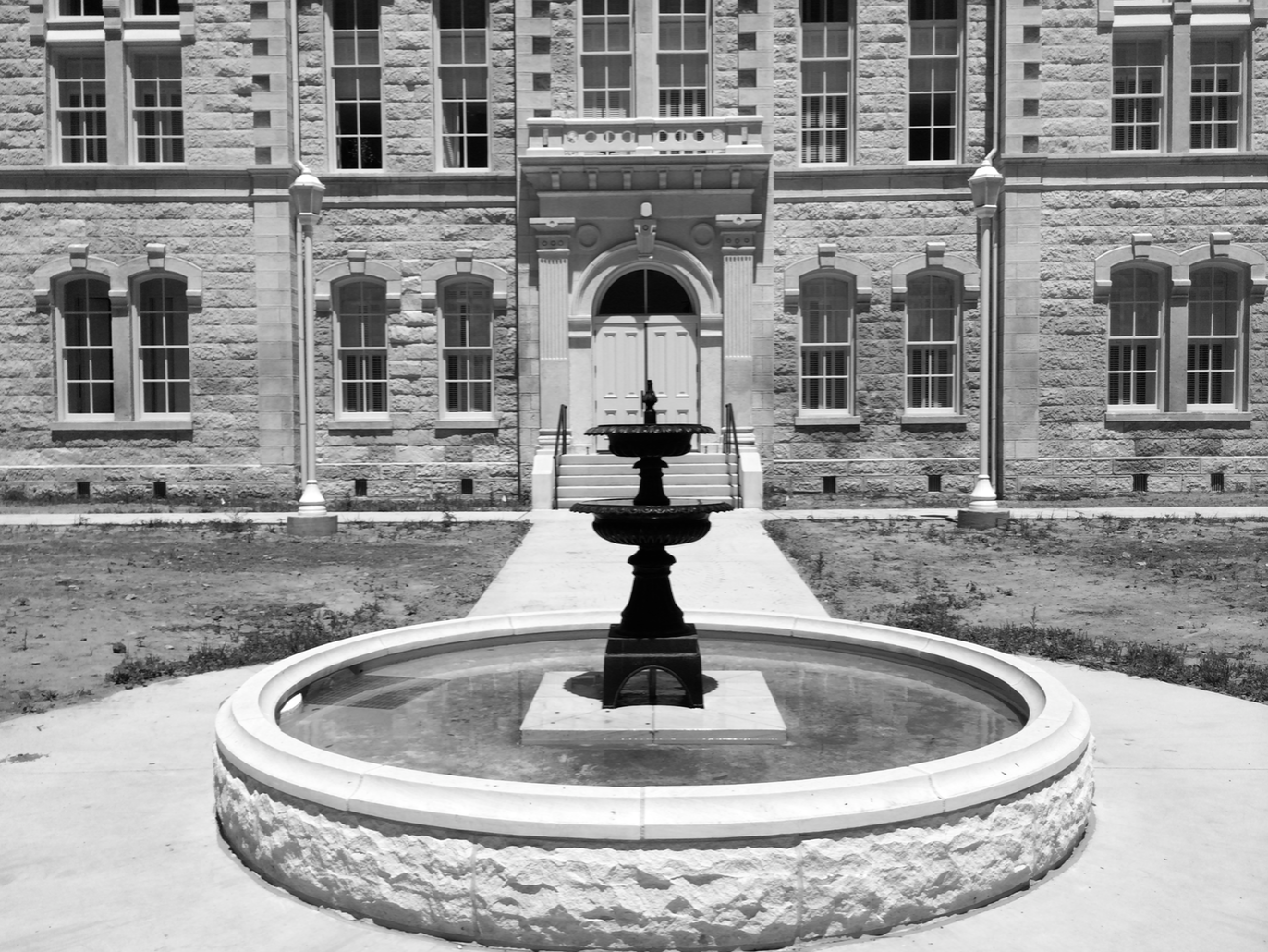 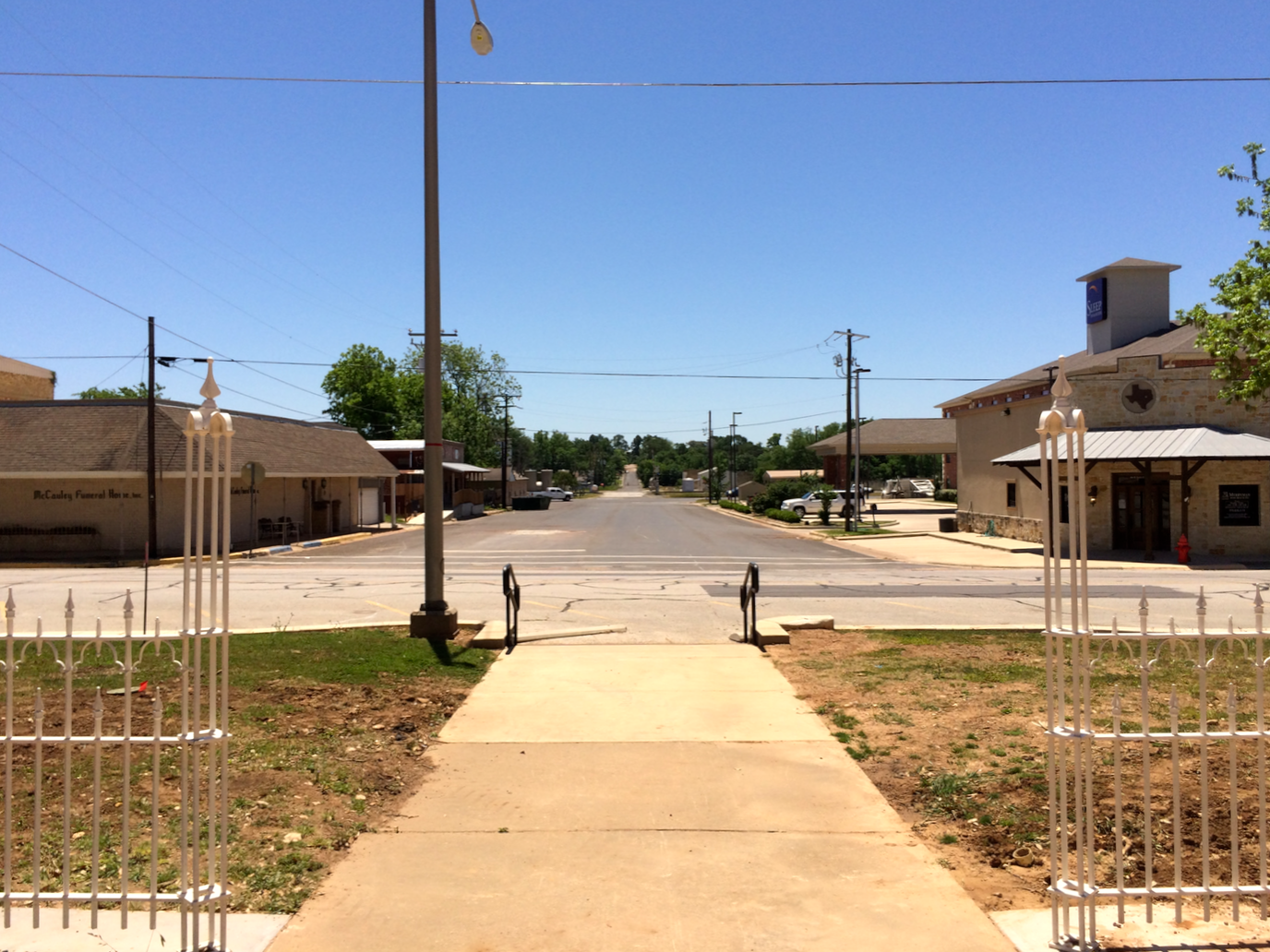 The view from the southeast façade 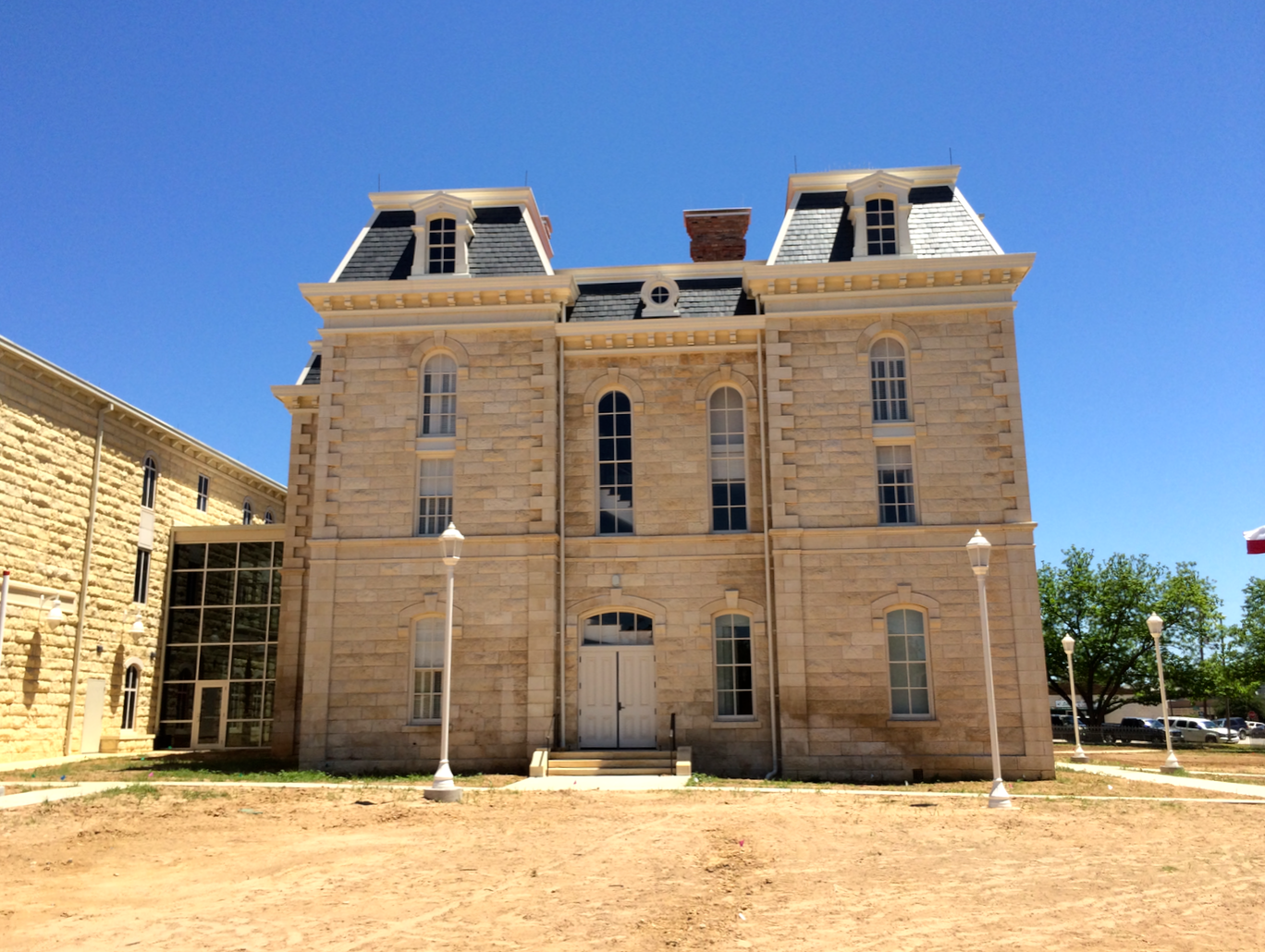 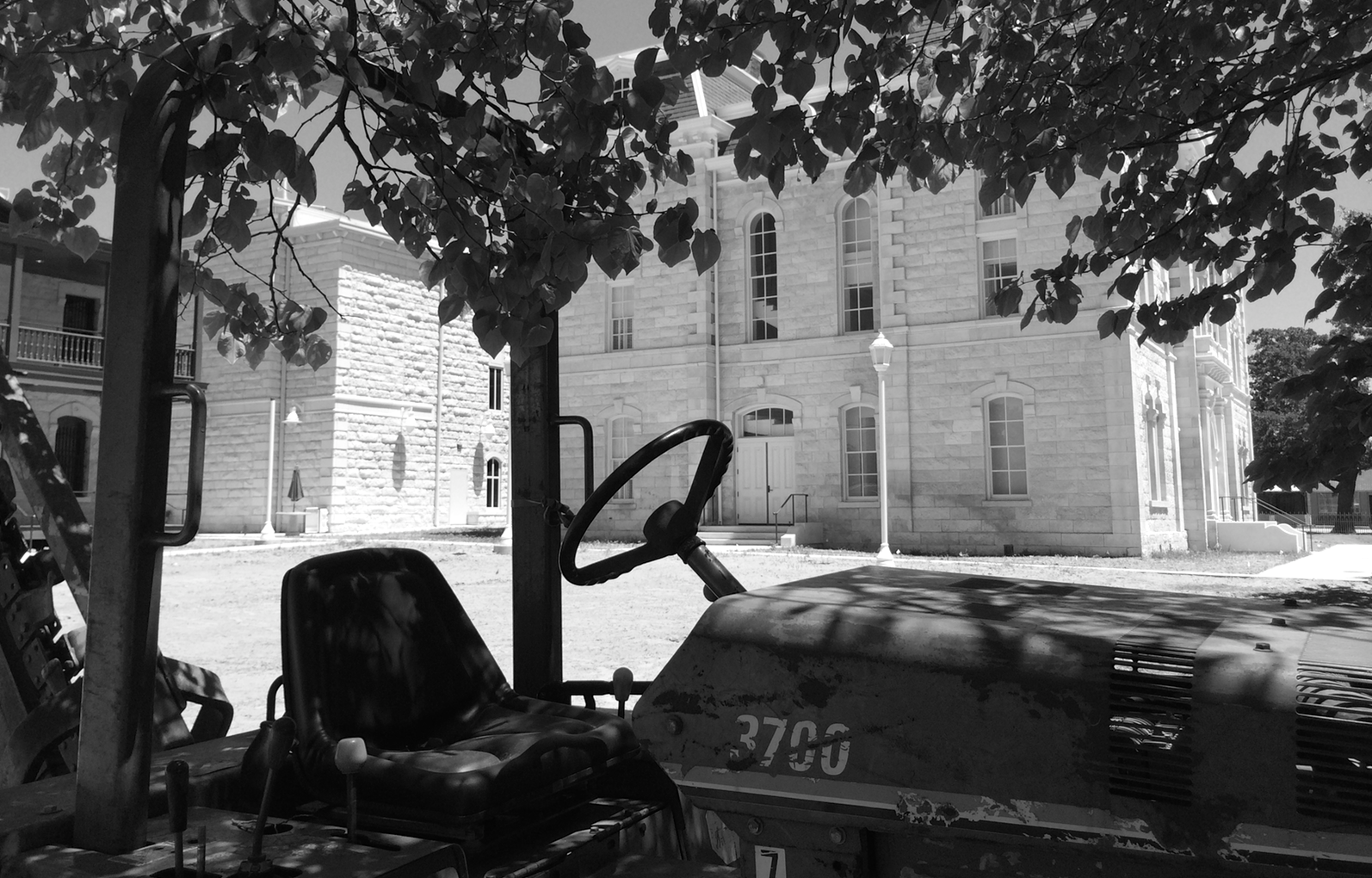 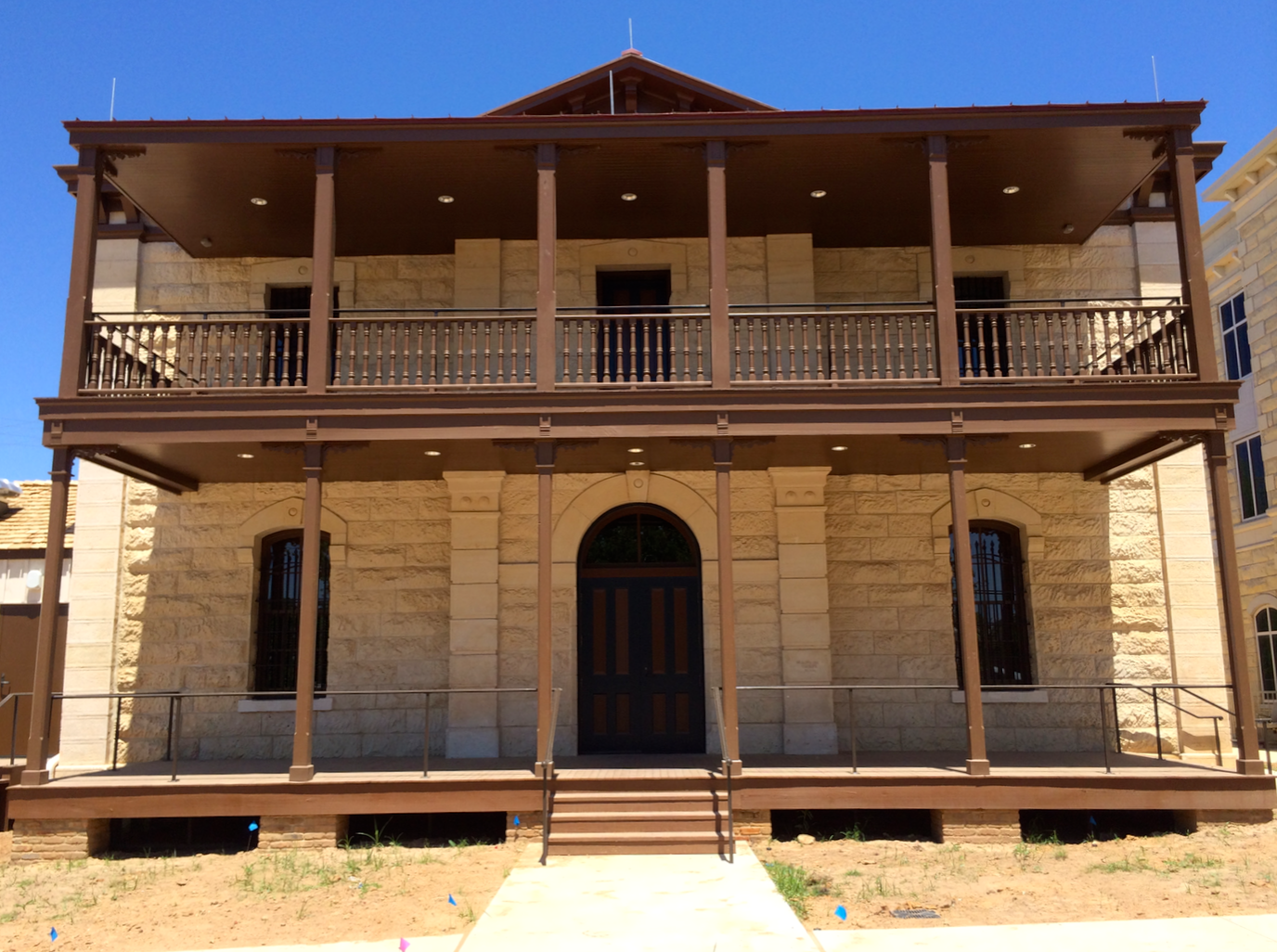 The historic Robertson County Jail is near the courthouse on the southwest side. 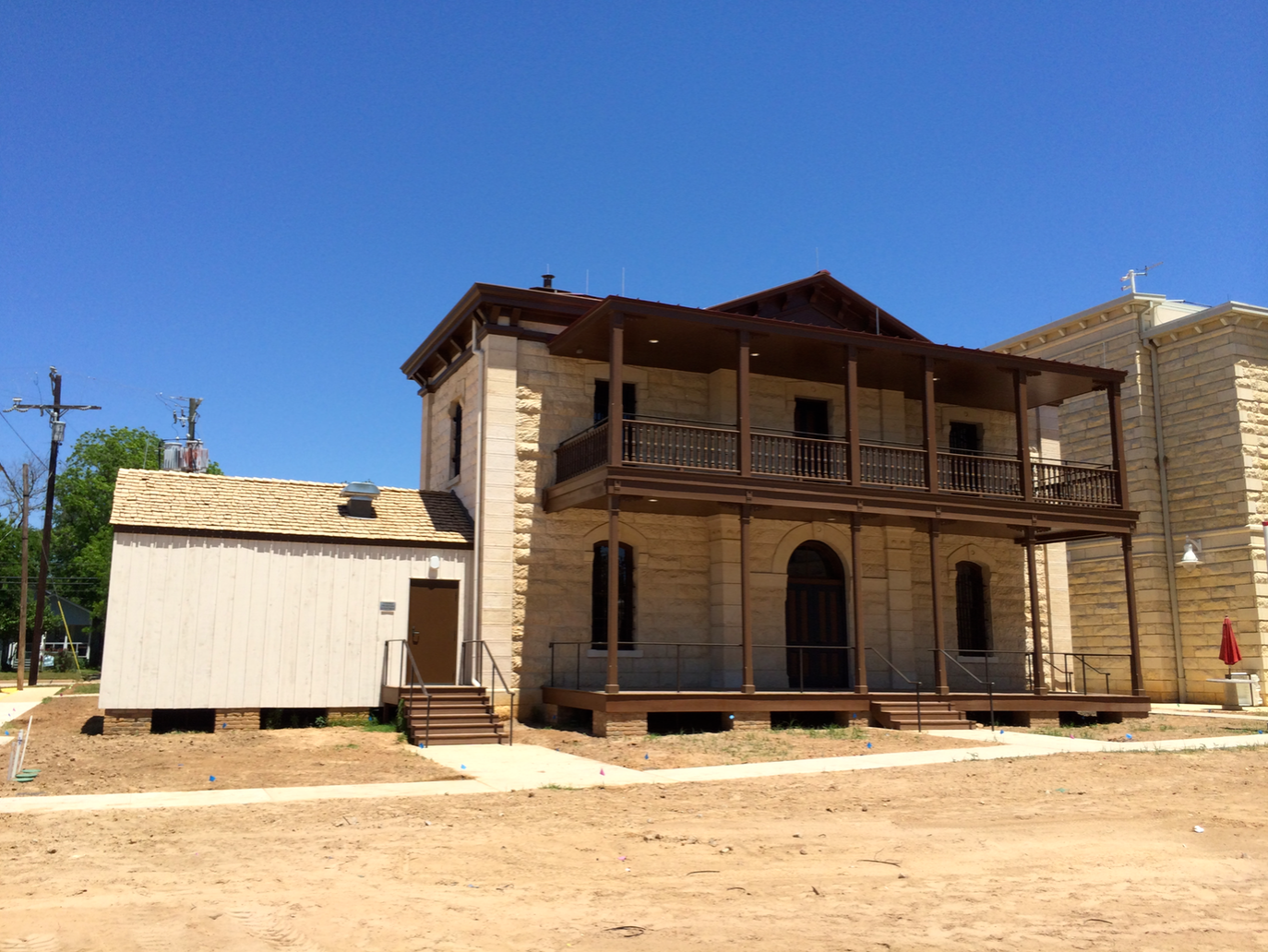 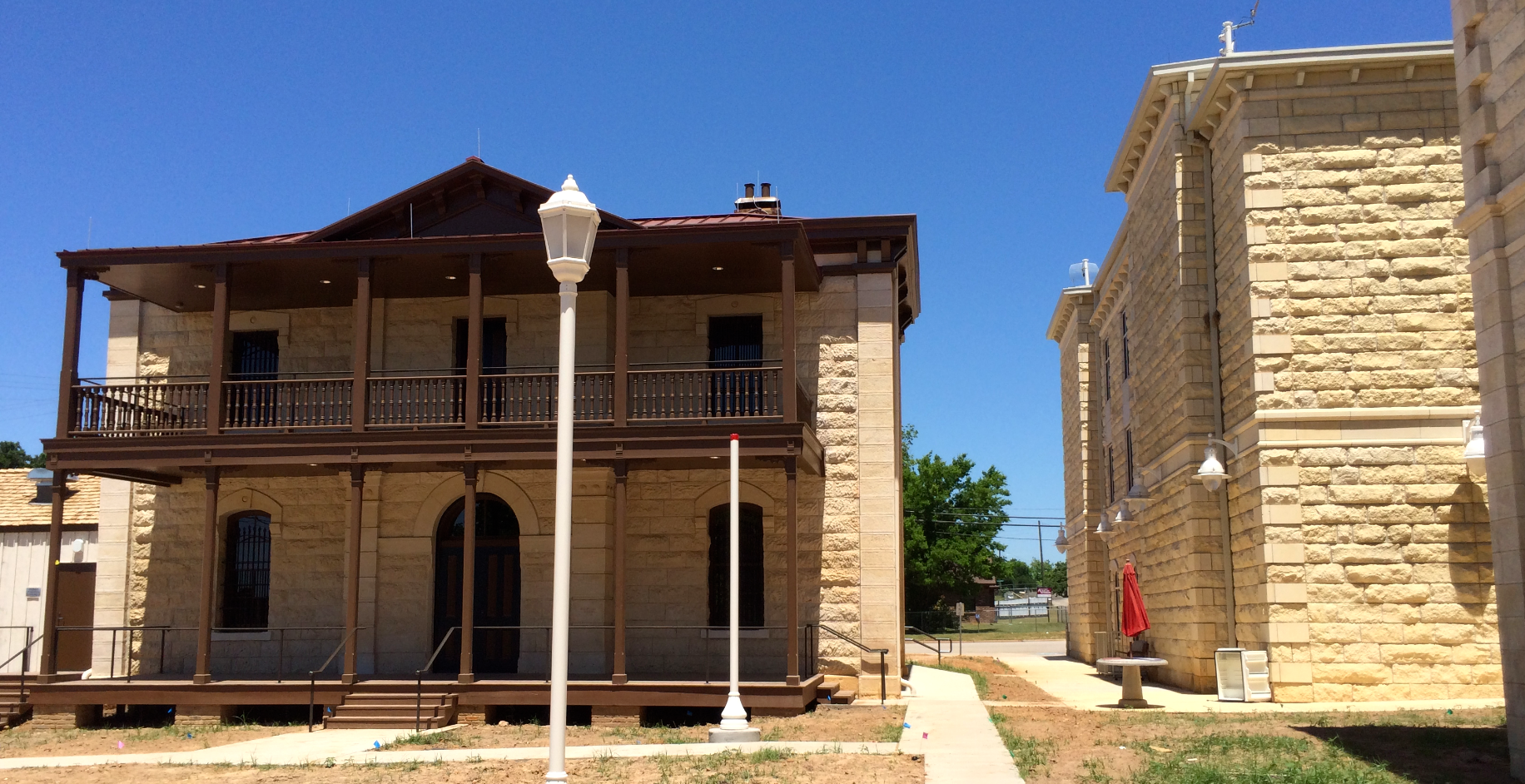 The historic jail and the not-so-historic courthouse annex 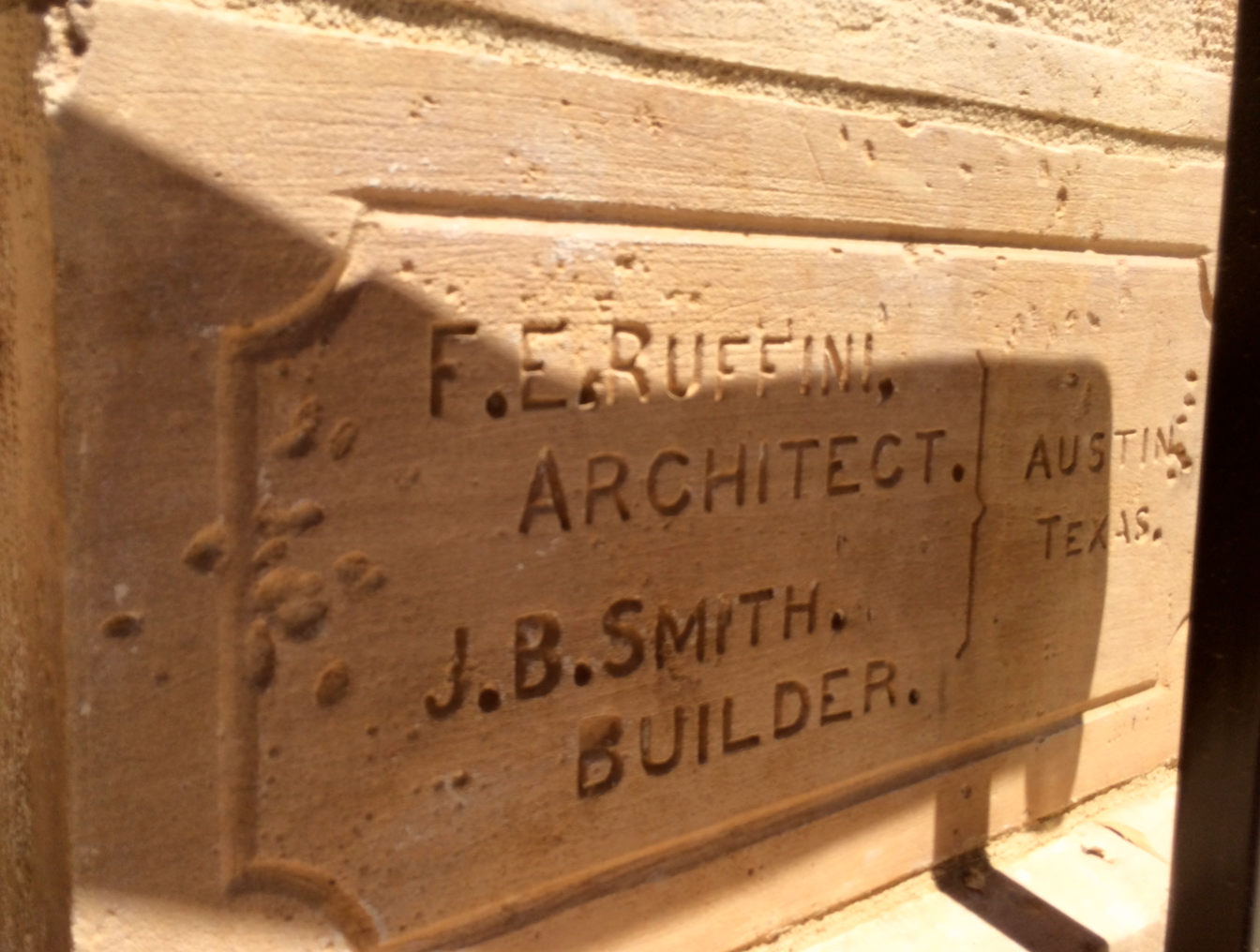 The cornerstone on the jail lists F.E. Ruffini as its architect as well. 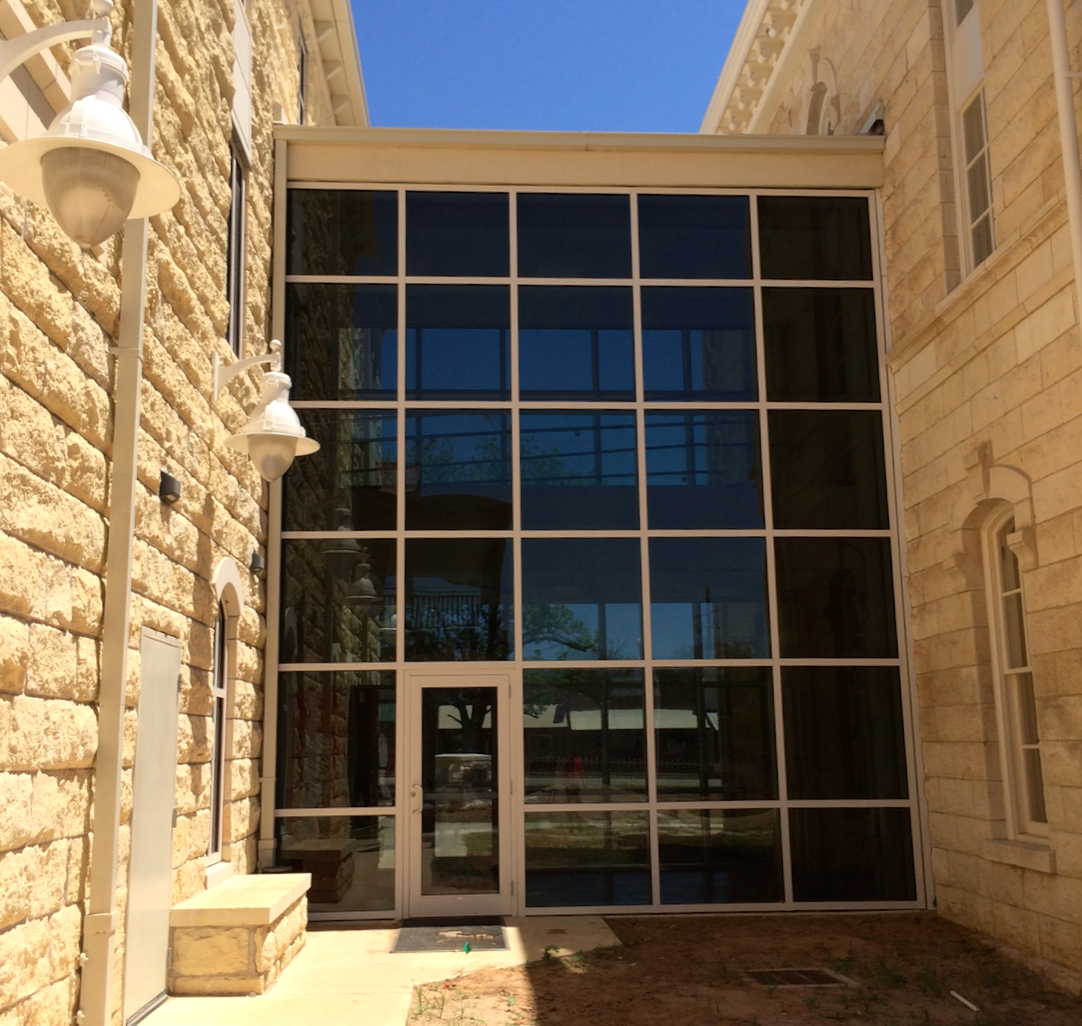 Near the jail, one can see the windowed walkway connecting the courthouse to the annex. 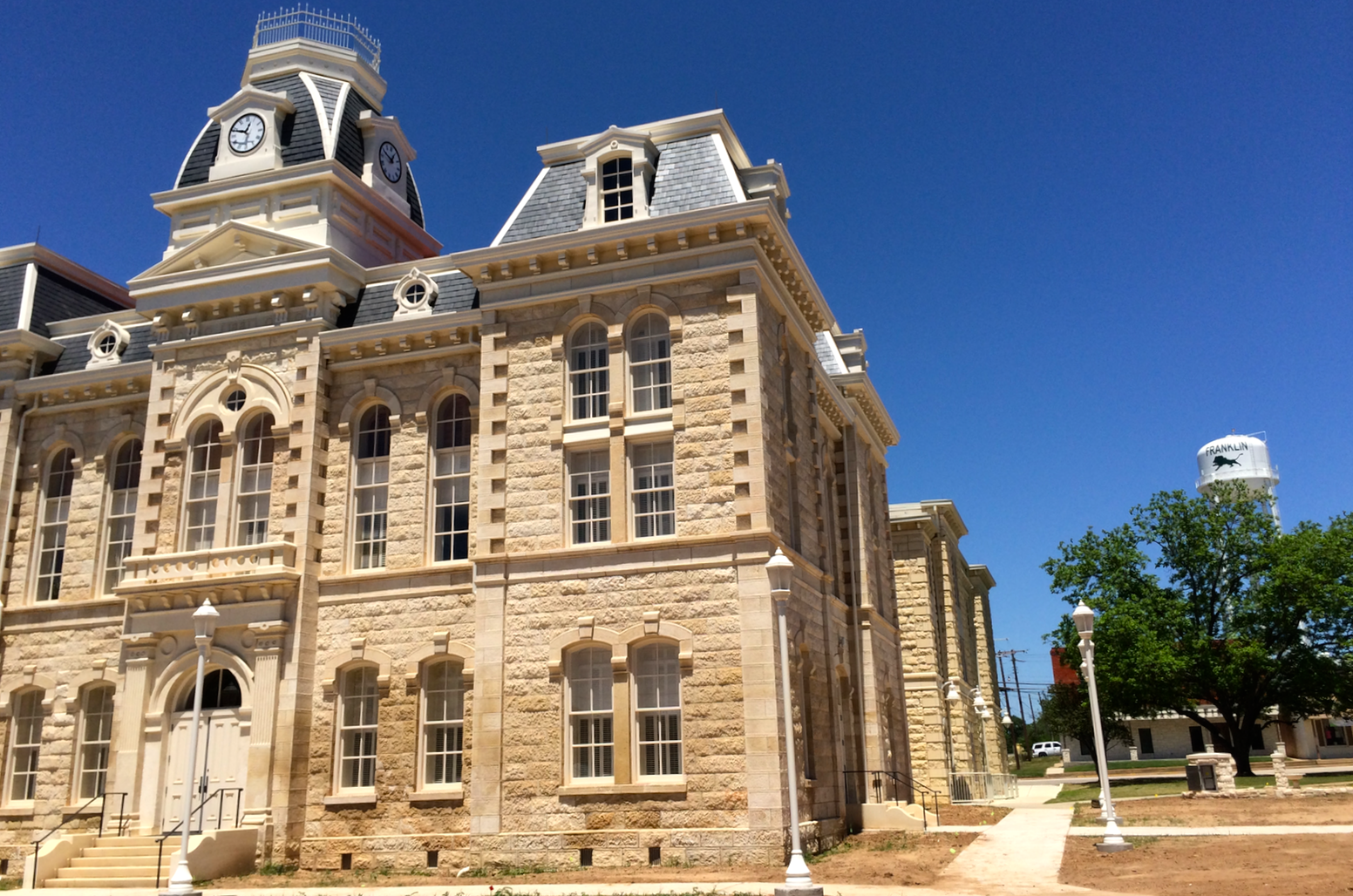 The courthouse and annex beyond 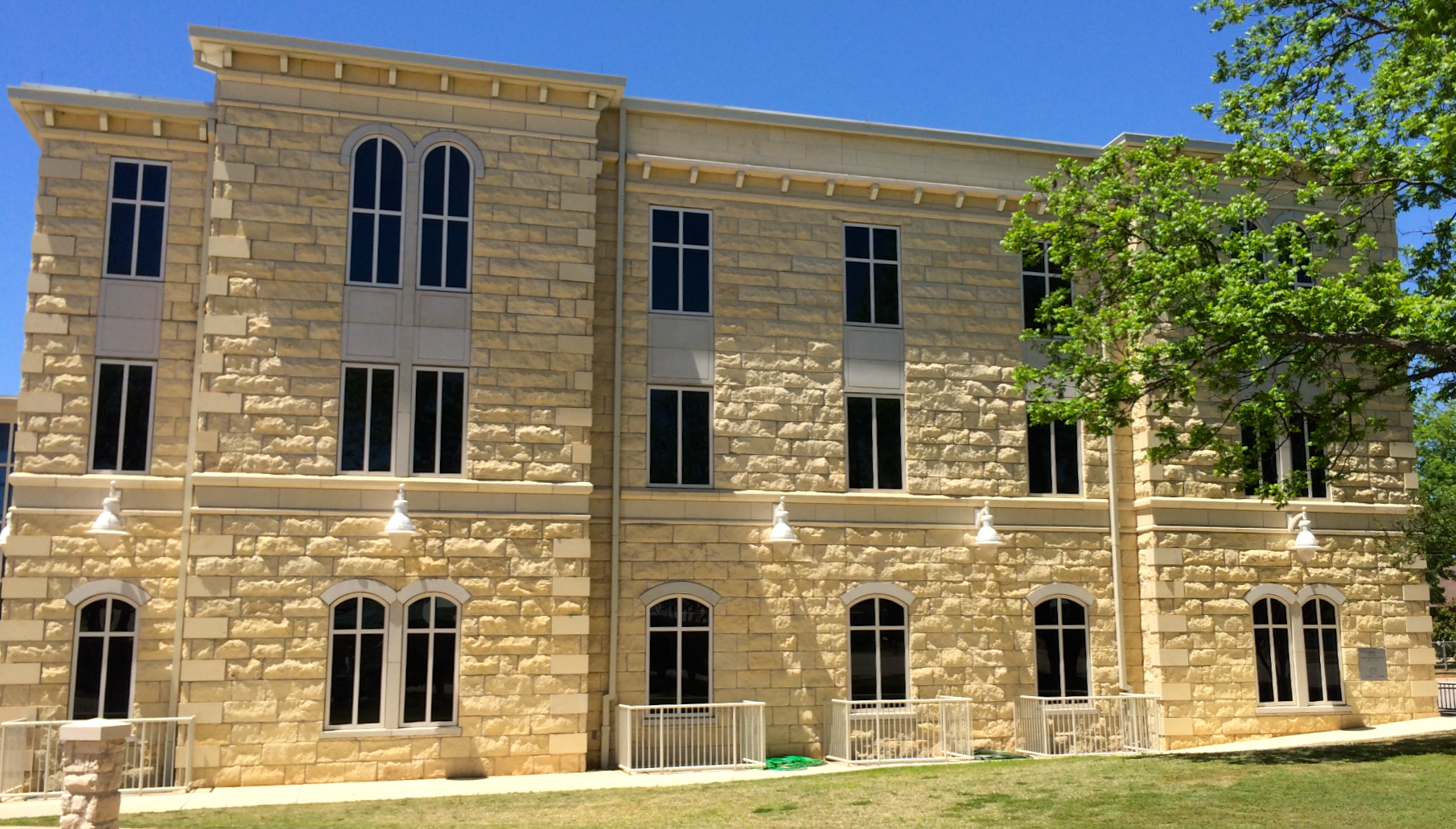 The 2011 annex was styled after the courthouse by Sinclair & Wright of Tyler.

The courthouse has two cornerstones, one listing the architect/contractor/county officers and this one. 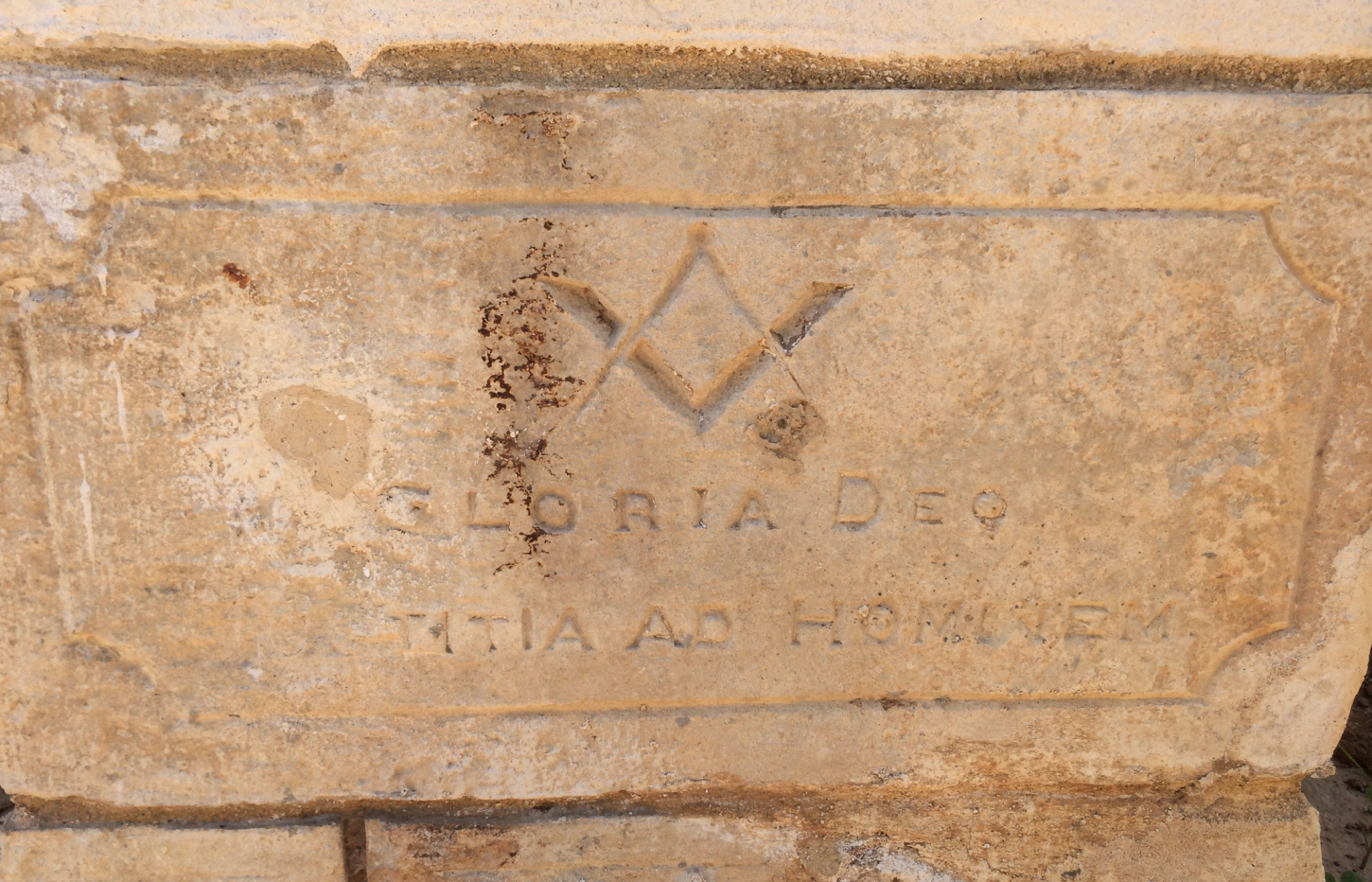 In faded lettering it reads: “Gloria Deo” and “Justitia Ad Hominem”  The E and O of “Deo” seem to have been hand carved after the cornerstone was laid. Grammatically-wise, the word should be “Dei” rather than “Deo”, however the intended translation is: “Glory to God, Justice to Men”. 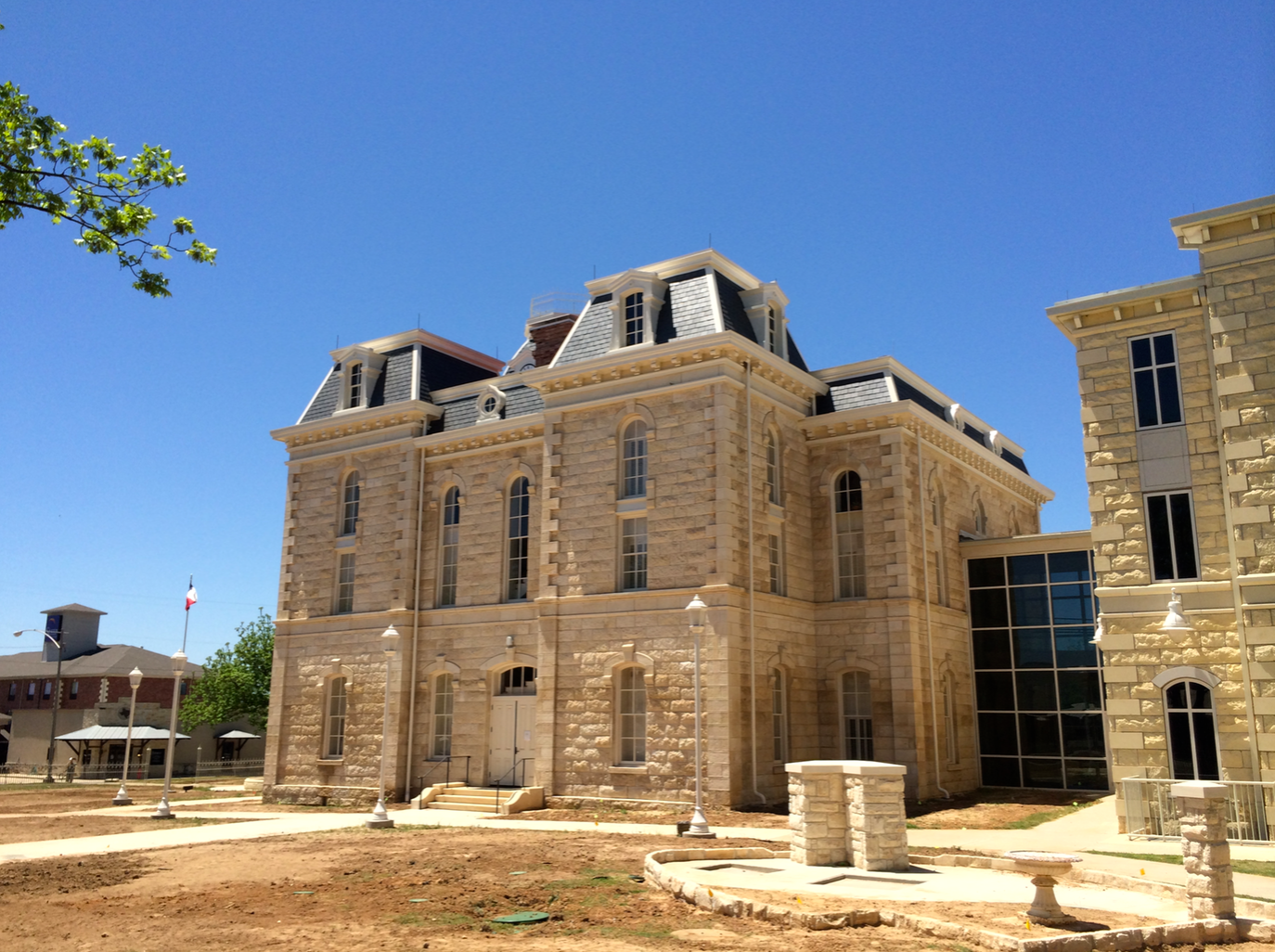