“Madison County includes 473 square miles primarily of post oak savannah, a mixture of post oak woods and grasslands. The northeast and south central parts of the county are in the Blackland Prairies region; the southeast corner of the county lies in the Piney Woods. Today, about one-fifth of the area is timbered, but early reports describe it as two-thirds timber and one-third prairie. It supported oak, cedar, elm, walnut, hickory, gum, pecan, ash, cypress, and pine.”

“The first European explorers known to have reached the area were Luis de Moscoso Alvarado and Robert Cavelier, Sieur de La Salle. Moscoso, a member of Hernando De Soto’s expedition who continued on in 1542 after De Soto’s death, eventually reached the southeastern part of the future Madison County and traveled along what became the La Bahía Road. La Salle is thought to have crossed southeastern Madison County in 1687, and some believe he was killed in Madison County, at a site just south of Madisonville.”

“Prominent among other early settlers and instrumental in settlement and development were James Mitchell, Job Starks Collard, and Dr. spa resort casino. Mitchell kept a well-regarded hostelry at the parting of the San Antonio and La Bahía roads and established the first post office in Madison County. Collard, a member of the Austin colony, was granted a league of land by the Mexican government on May 28, 1835. In 1853 he donated 200 acres for the establishment of a townsite, on which the county seat, Madisonville, was founded.” 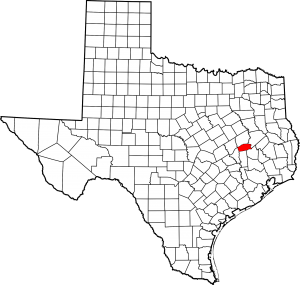 “The judicial Madison County was formed on February 2, 1842, from Montgomery County. (Judicial counties were later declared unconstitutional because they had no legislative representation.) Because residents of the northern parts of Walker and Grimes counties lived forty to fifty miles from their county seats, they petitioned the legislature for the establishment of a new county. The formation of Madison County from Grimes, Walker, and Leon counties was approved on January 27, 1853, and organization followed on August 7, 1854.”

“Madisonville, the county seat, was established upon the formation of the county, in compliance with the legislature’s ruling that county seats be no more than five miles removed from the centers of the counties. By 1854 Elwood, one of the largest communities in the county, was a rival to Madisonville for designation as the county seat. But after being passed over, it did not continue to prosper.”

“Madison County, reported to have been “wild and wooly” before and after the Civil War, was referred to as the “Free State of Madison.” Between 1854 and 1873 the county lost three courthouses to fire, and in 1967 yet another courthouse burned to the ground. The present building was completed in 1970.”

“The railroad reached Madison County in 1903, when the International-Great Northern Railway Company extended a branch line from Navasota to Madisonville. In the 1980s the county was served by the Joint Texas Division main line running between Dallas and Houston, operated by a partnership of the Burlington Northern and Chicago, Rock Island Pacific lines. By the early twenty-first century the line was operated by the Burlington Northern Santa Fe.”

“Madison County has always been primarily agricultural and rural. Crop production, once the primary means of subsistence, dropped off sharply after 1959 in almost every category. In 1987 the number of farms operating was 756, only 32 percent of the total of 2,355 reported in the peak year of 1930. The former staple crops, corn, cotton, and sweet potatoes, no longer contribute significantly to agricultural income. Cotton production was 12,196 bales in the peak year, 1900, but yields diminished gradually to 2,435 bales in 1959 before dropping to zero in 1982. Corn harvests increased dramatically, from 65,225 bushels in 1860 to 589,202 bushels in 1920, then dropped to 189,364 bushels in 1930.”

“The construction of Interstate Highway 45 through Madison County, which began in 1962, brought a short period of prosperity to the county. A substantial decline occurred after its completion in 1965, however, as jobs and trade that had been generated by the construction were lost. Between 1960 and 1970 employment in every category declined drastically; construction jobs dropped from 568 to 69, jobs associated with transportation dropped from 326 to 32, and employment in service industries and retail and wholesale trade declined from 2,745 in 1960 to 547 in 1970.”

“Oil was discovered in 1946, and the county has generally ranked in the middle range of producing counties in Texas. In the early 1980s the county ranked in the top third of Texas counties in oil production, yet still substantially below the largest producers. As the market fell off, however, Madison County’s petroleum-related activities shared the decline of the rest of the Texas oil industry.”

“Madison County is crossed by Interstate Highway 45 and has a road network that in 2002 totaled 507 lane miles. One public airport provides service to the county. Madisonville (population, 4,708) is the county’s seat of government and largest town; other communities include Midway (236), North Zulch (600), and Normangee (668, mostly in Leon County). The scenic Texas Brazos Trail runs through Madison County, and Madisonville hosts the Texas Mushroom Festival in October.”

I was the guest of Madisonville and Madison County on May 2, 2014. 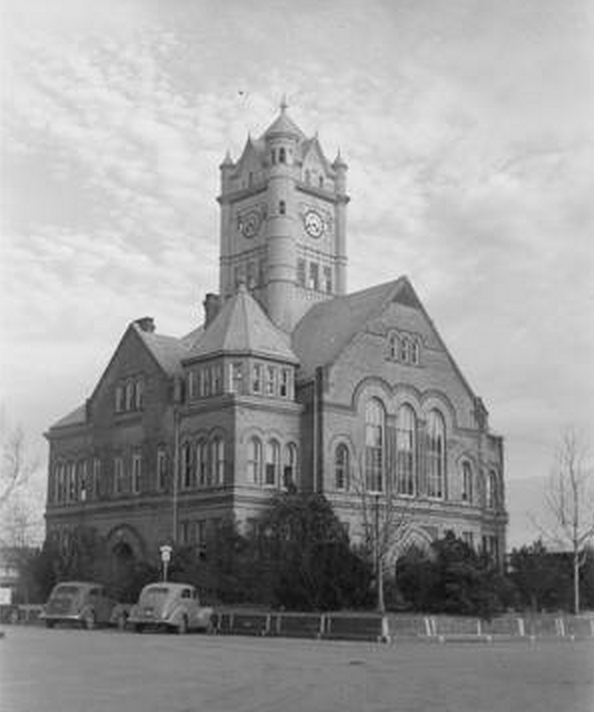 This grand Richardsonian Romanesque courthouse was designed by an unknown architect. In no place have I ever been able to find the name of whoever brought this building to life. The only information that survives is that it burned on Mother’s Day (May 14), 1967 and cost the county $22,500. 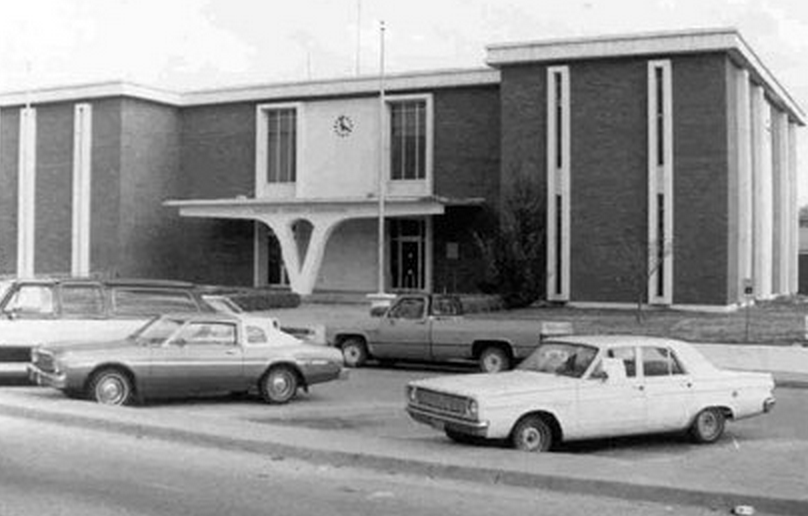 The firm Dickson, Dickson, Buckley, & Bullock designed this modern courthouse and it was constructed by the J.H. Spruiell Construction Company. 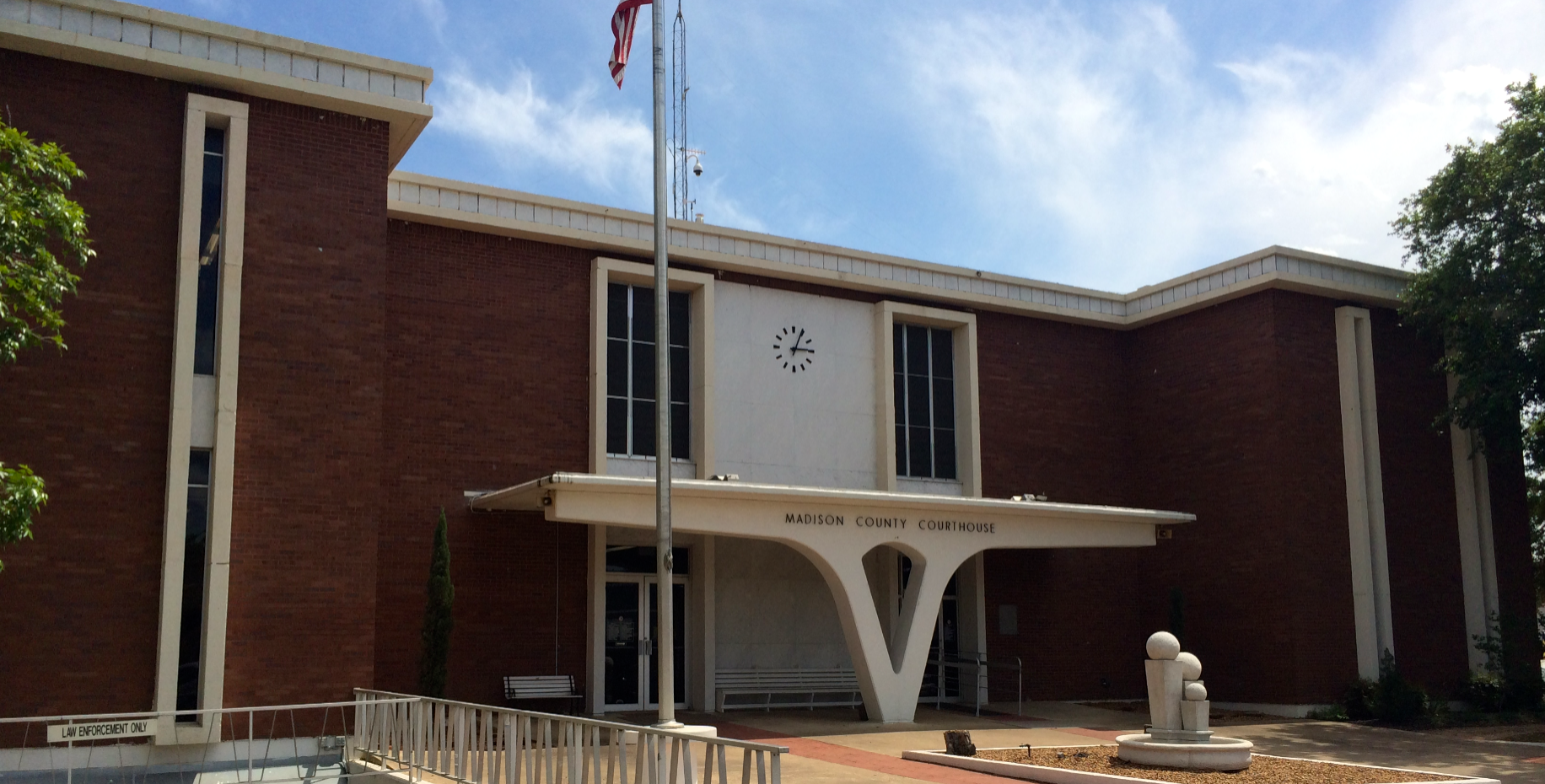 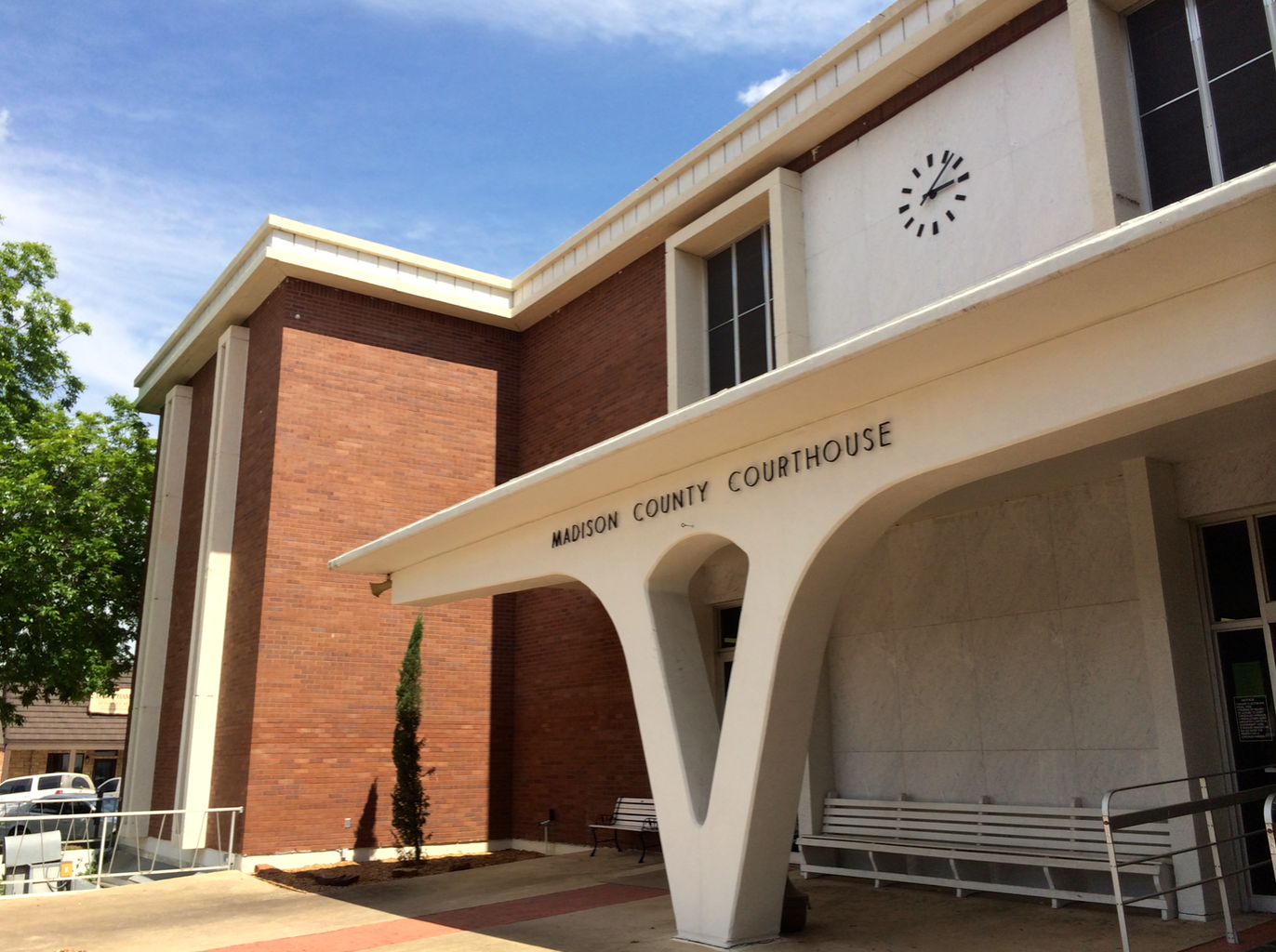 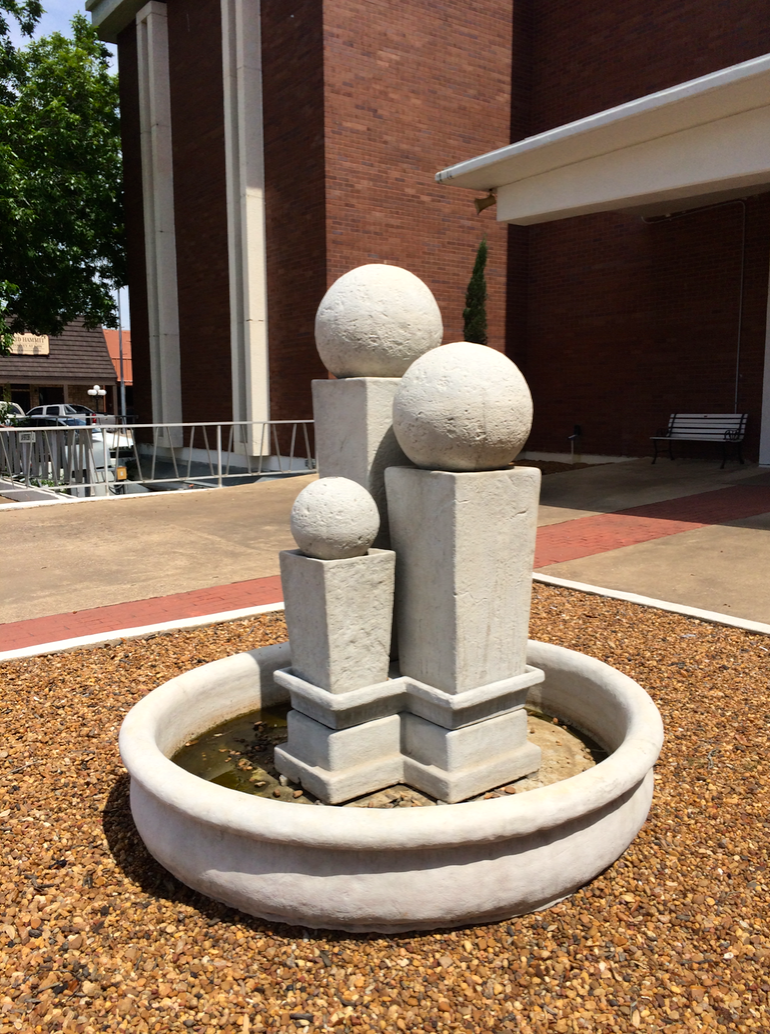 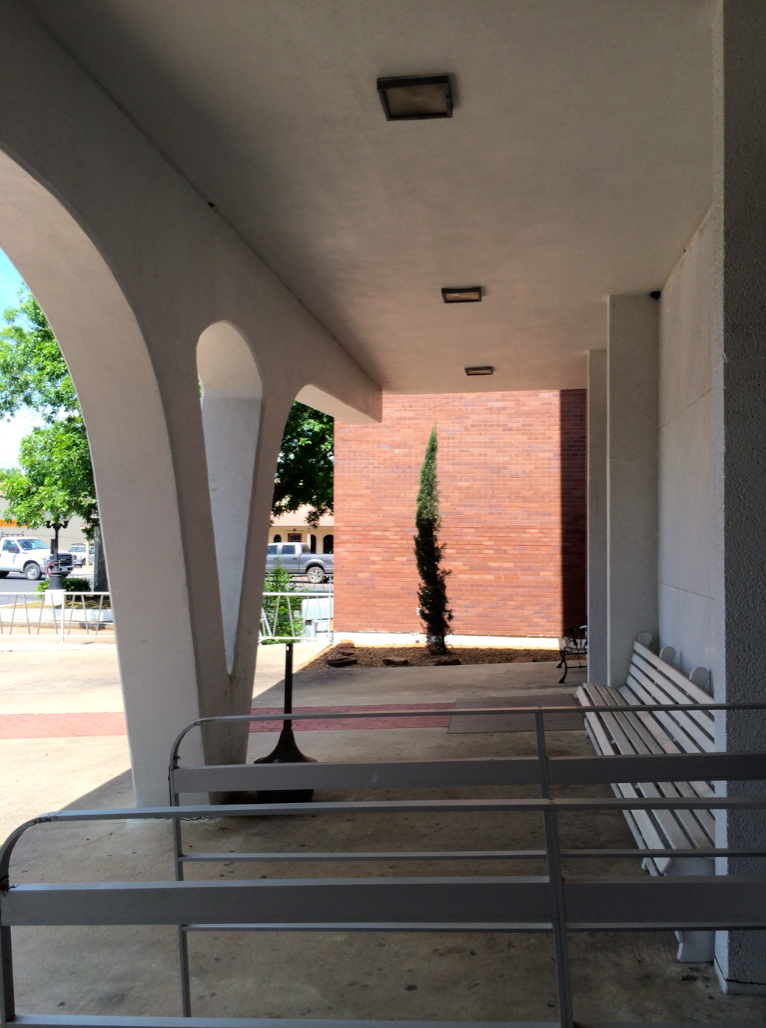 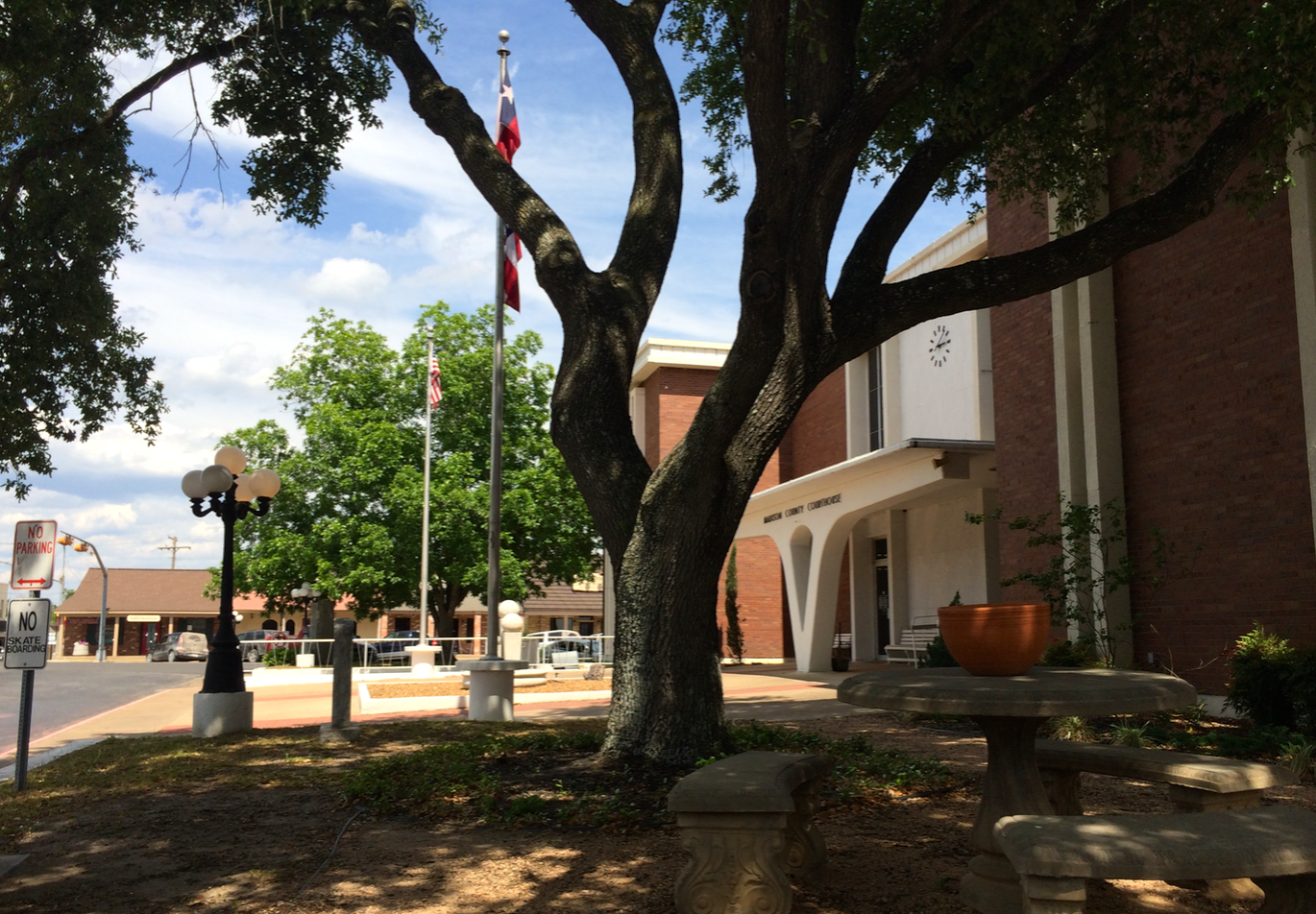 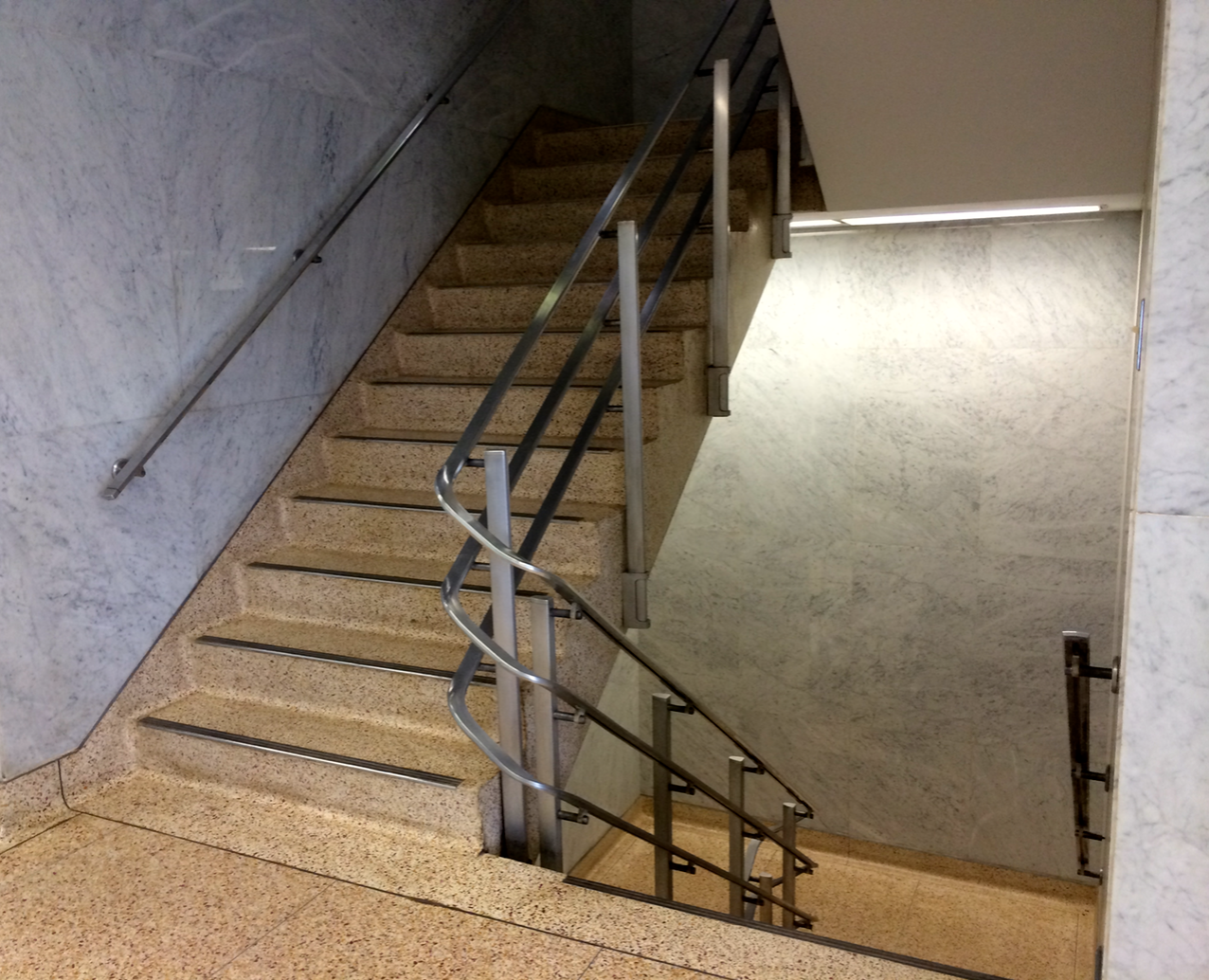 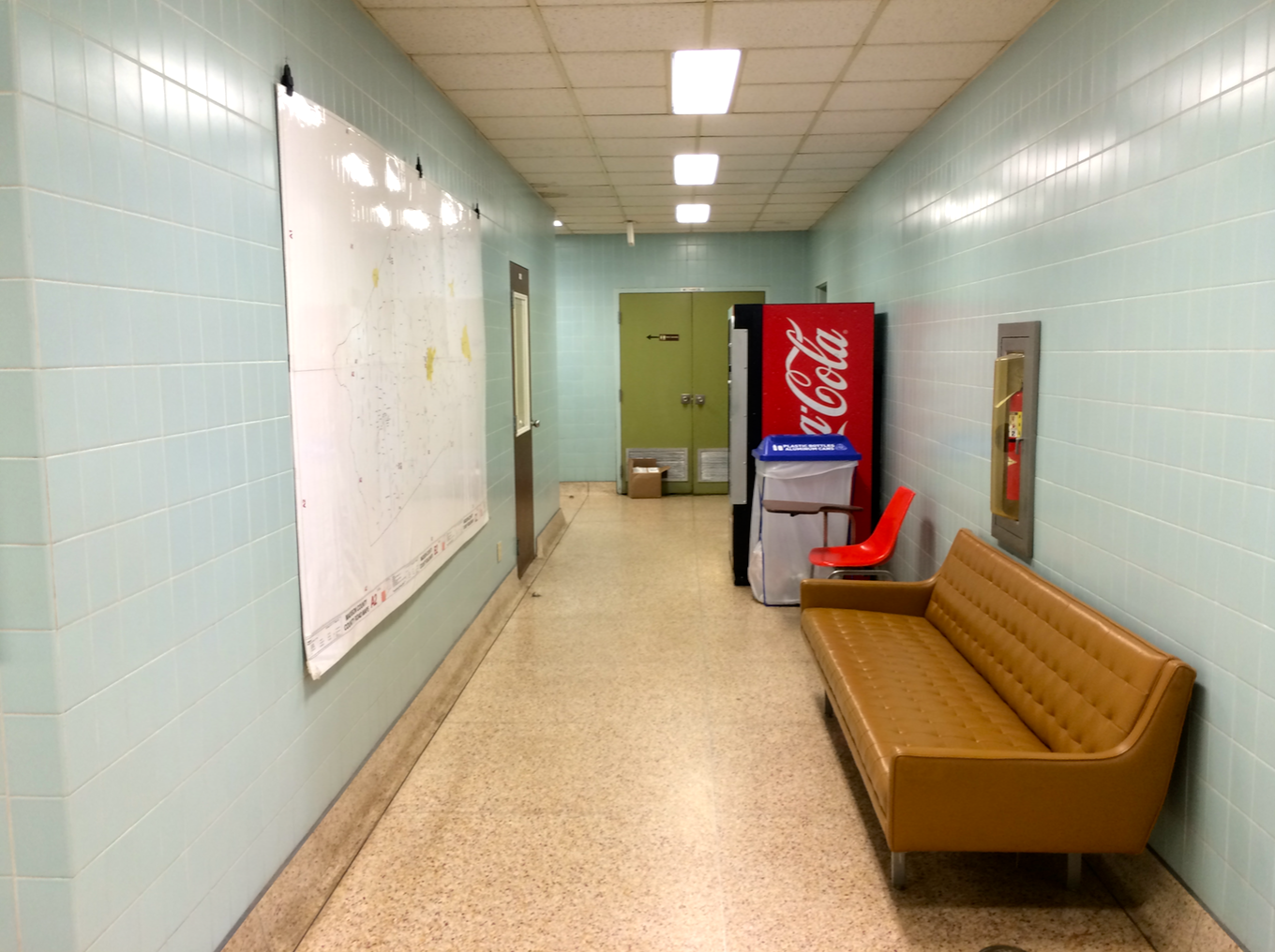 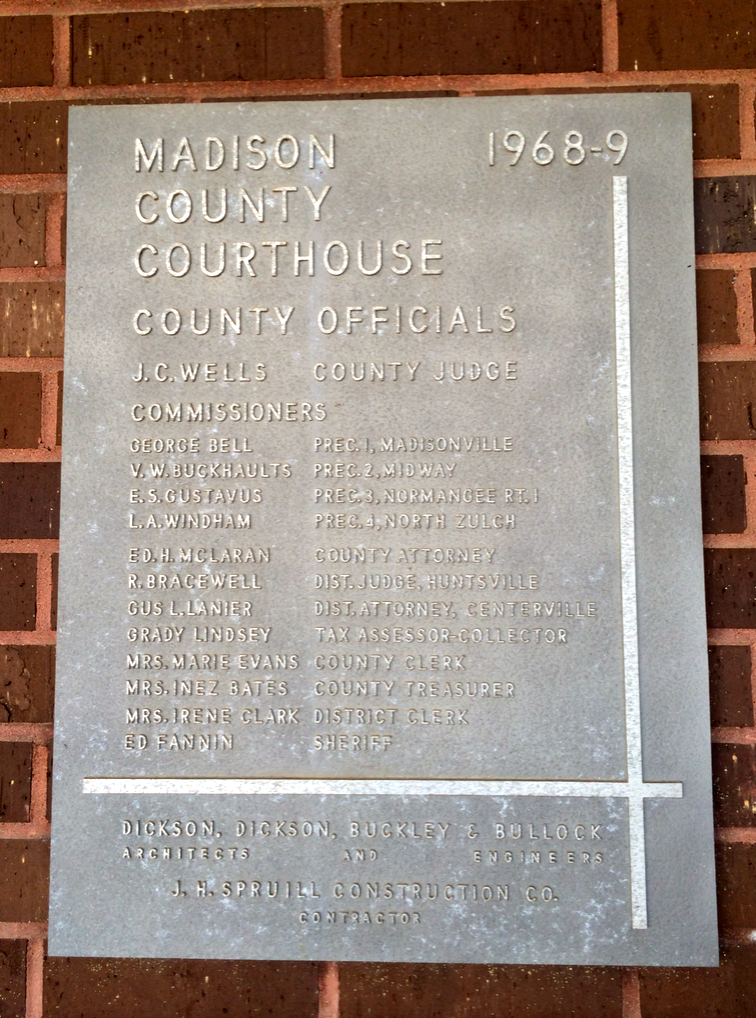 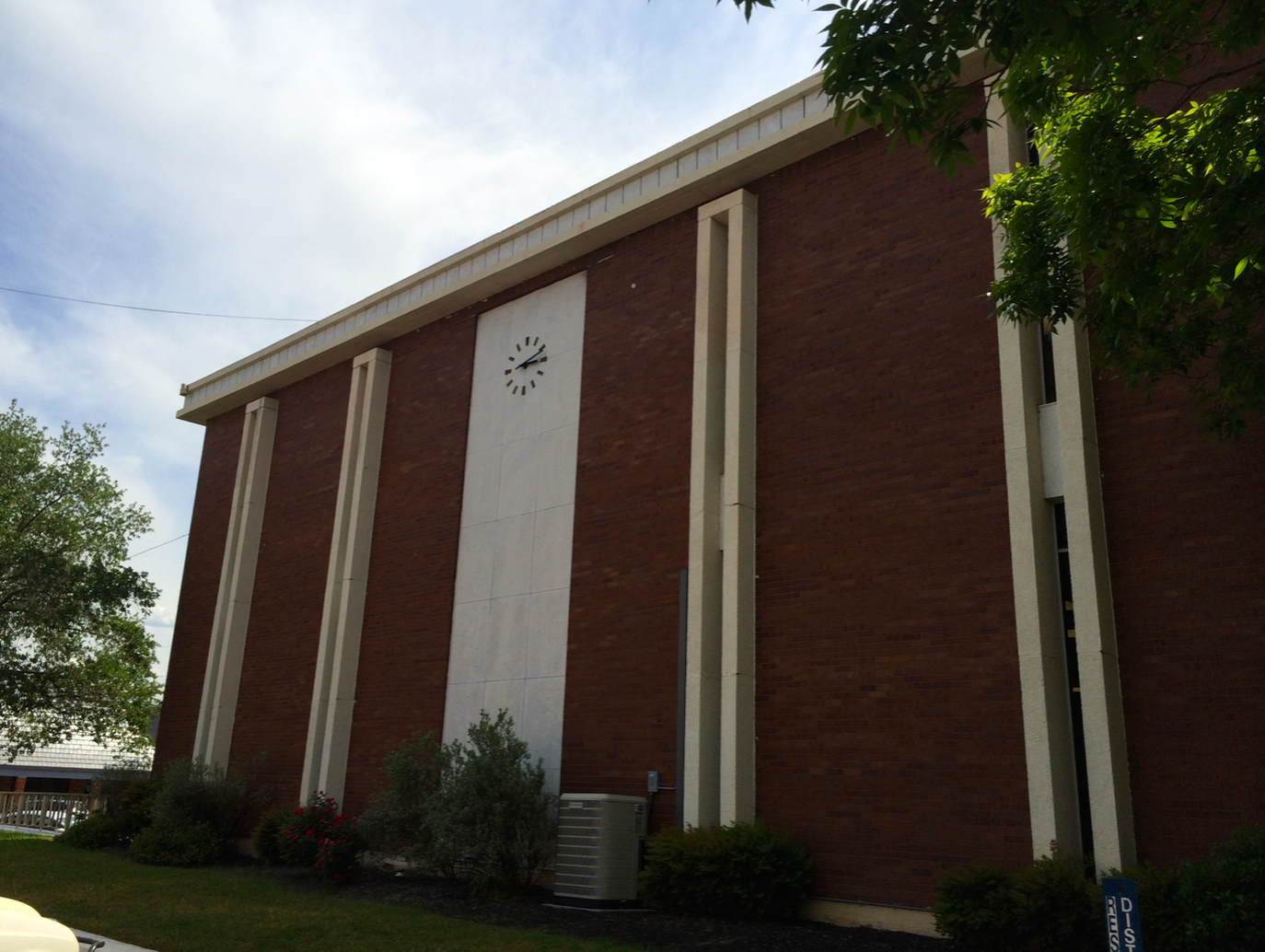 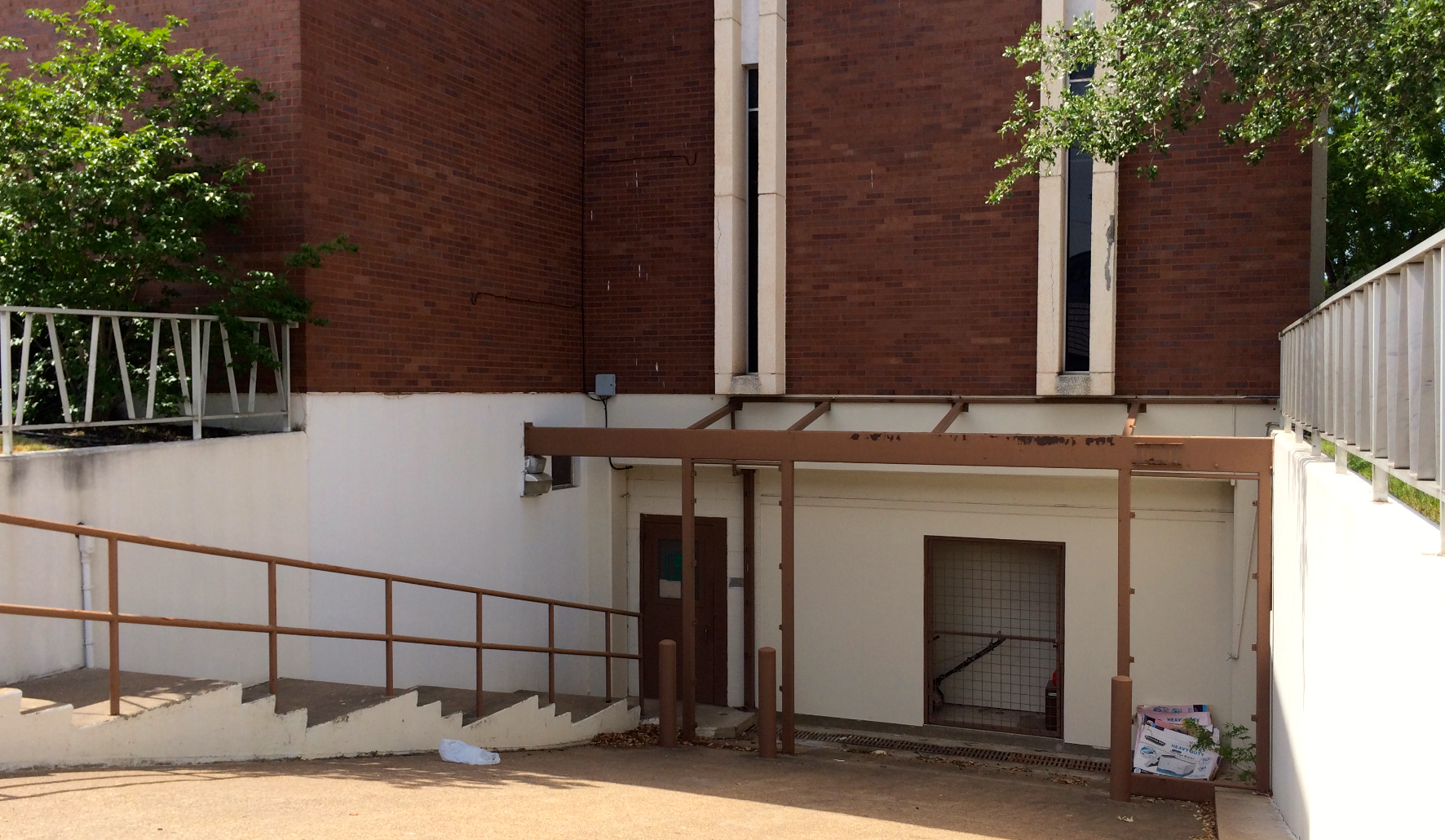 The courthouse annex is on Trinity Street.