“Bosque County is an agrarian area that covers 989 square miles. As a part of the Grand Prairie subdivision of the North Central Plains, the land is primarily an area of shallow to deep, well-drained soils underlain by limestone. Around the streams are deep, well-drained and moderately well-drained soils. Many believe that the soil is the most important natural resource of the county because the life of the livestock and the flora and fauna depend heavily upon it.”

“The area is also distinguished by clusters of flat-topped hills separated by low areas of flat grassland. Although many grasses cover the prairie areas of Bosque County, Johnson grass is the most common. Numerous livestock graze in the county, where sudden outcroppings of white limestone form tall, steep hills or cliffs. Throughout the plains areas, cedars, oaks, and mesquites are prevalent. The only commercial mineral found in Bosque County is limestone.” 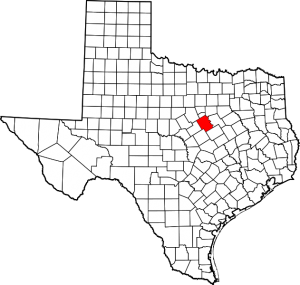 ”The first exploring expedition that recorded travel in this area was made in 1721 by the Marqués de San  Miguel de Aguayo, a Spaniard who established many missions in Texas. In one trip from San Antonio de  Béxar to an East Texas mission, he ventured away from the regular road, the Old San Antonio Road, and  wandered north. During this time he camped near the Brazos River and a major tributary. He named this  tributary Bosque, Spanish for “woods.” The county, therefore, derives its name from the Bosque River.”

”Bosque County was officially formed in February 1854 from McLennan County. Soon a site was chosen at  which to locate the county seat. (George B.) Erath laid out the town of Meridian in the center of the county on l  land donated by Dr. Josephus M. Steiner. Town lots were sold at a public auction on the Fourth of July 1854.  Soon thereafter, the first courthouse, a one-story log cabin, was erected in the middle of town. This building  served the needs of the residents until 1869, when a larger frame structure was built. In 1871 this second   courthouse burned. For four years the business of the county was conducted in a tent.”

“Also in 1854, Norwegian immigrants began to move to the area. Ole Canuteson, the first, believed that the land was much like that in Norway. The state of Texas offered 320 acres to each family that would settle in the new county, and the Norwegians took advantage of the offer. Cleng Peerson, the “father” of Norwegian immigration to America, led the settlers to the region.”

“At the turn of the century the population had increased to 17,390, but growth fell off subsequently in livestock production, crop production, and manufacturing. There were several reasons for the local depression. The soil was exhausted and eroding. Declining prices, spring floods, summer droughts, unseasonable weather, and onslaughts of insects plagued farmers.”

“During the 1980s, Bosque County grew in population and economy. In the late 1970s and 1980s residents of Clifton, the largest town, carried out “Operation Comeback.” The town grew by 40 percent in population and more than 100 percent in businesses. The town renovated old buildings in order to open a modern home for senior citizens, established Goodall-Witcher Hospital, and opened a 150-employee garment factory, an oilfield-tool manufacturing plant, and a 100-employee lime plant.”

1. You’ll find that pronouncing the county with the usual Spanish flare bosque would require is incorrect. It’s pronounced: “boss-key.”

2. The current courthouse tower and portions of the roof were removed in 1934 as a WPA project. The second phase of a restoration project added the tower and roof back. It was rededicated in 2007. 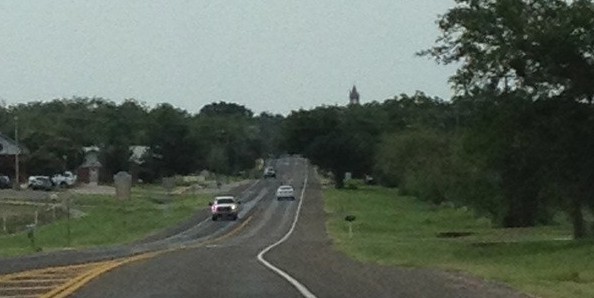 Approaching Meridian from the north

You can clearly see what portions of the building are originally from 1886, and which were added from 2006-2007. 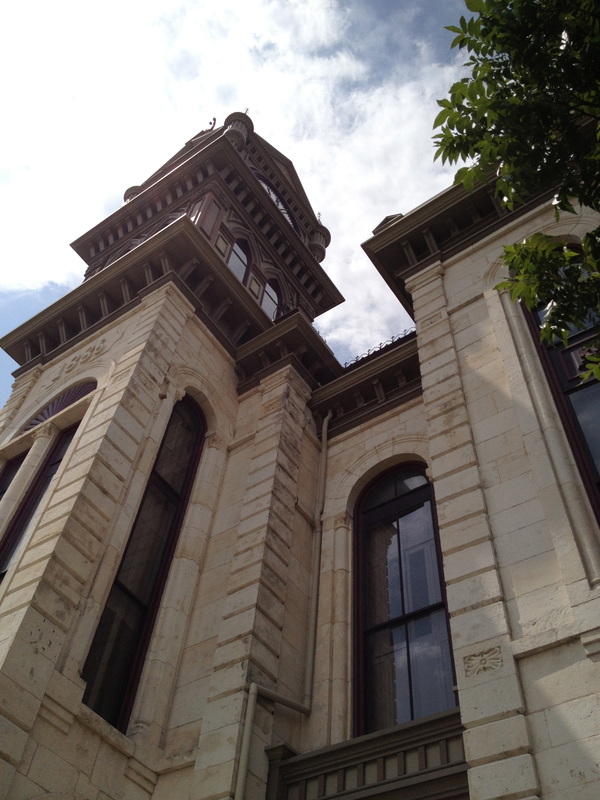 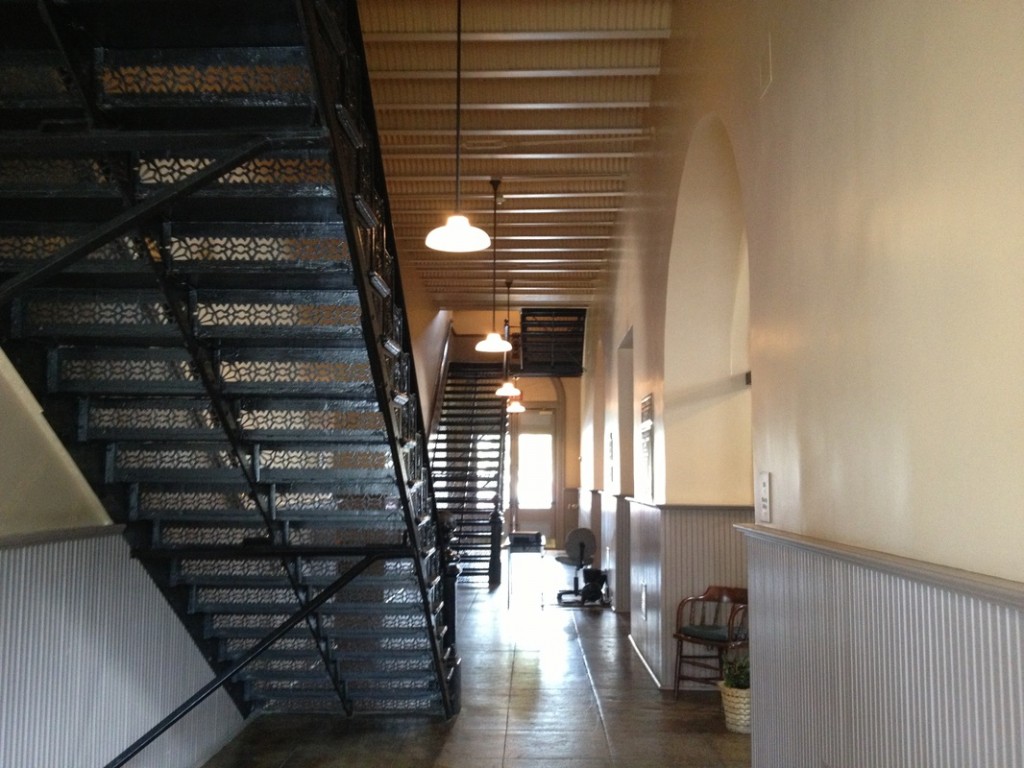 A very welcoming security guard informed us that both staircases are original. 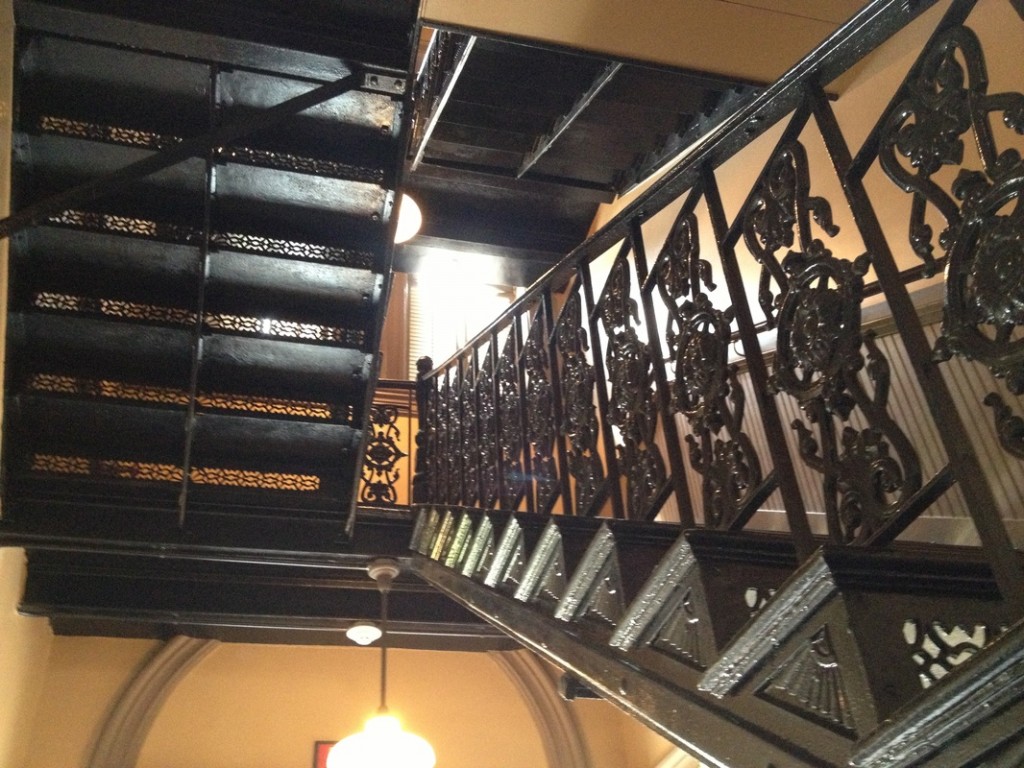 “There’s nothing going on, but you can go up there if you want.” – Security Guard

We tried out the original staircases and went to see the second-story courtroom. 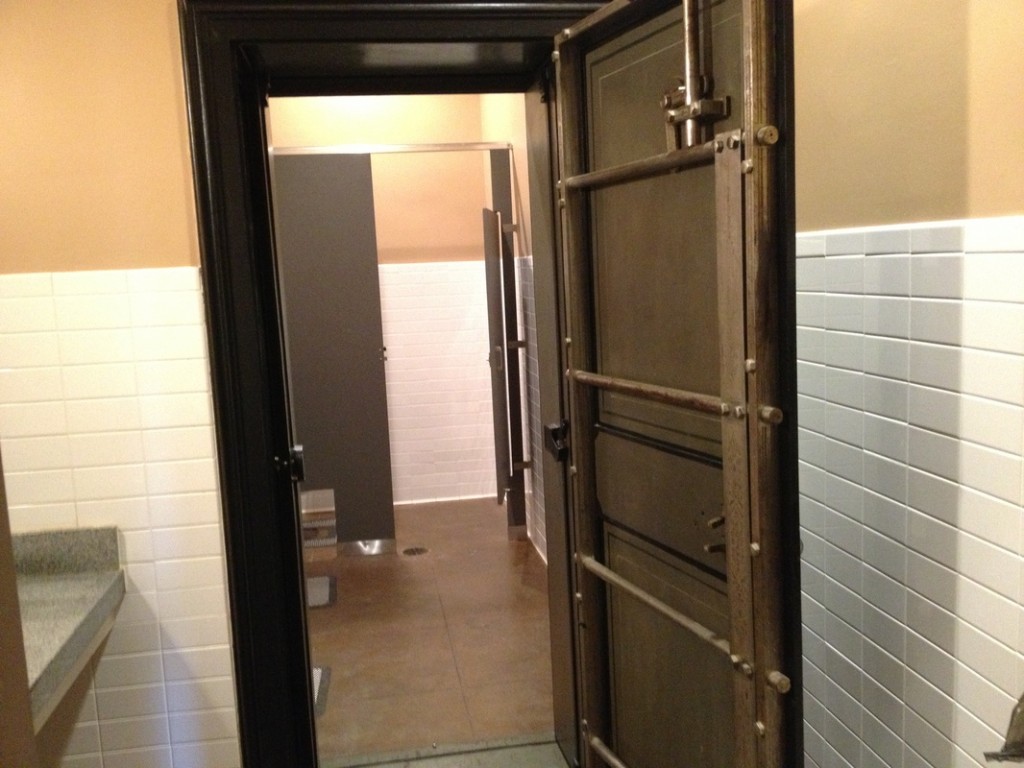 If it was not for the security guard, we might not have found this interesting feature of the courthouse: an old walk-through safe on the first floor was converted into a men’s restroom (during the renovation, I presume). 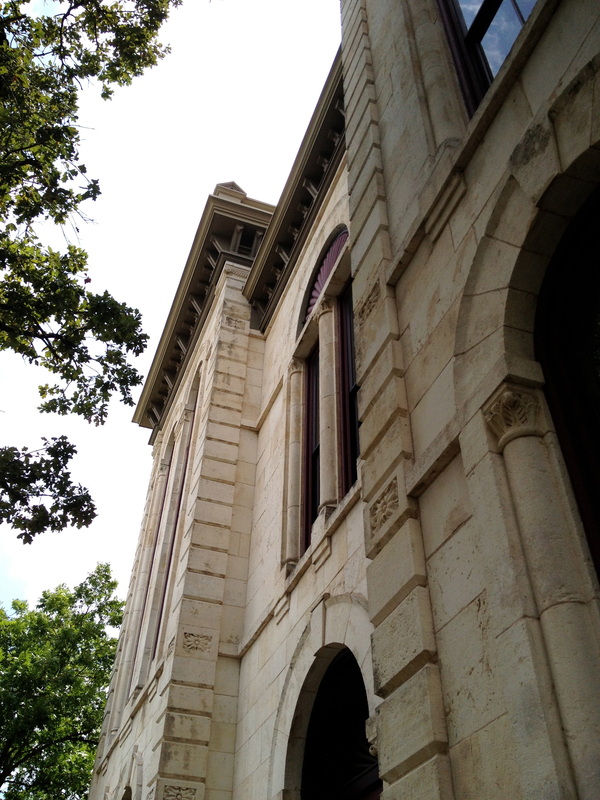 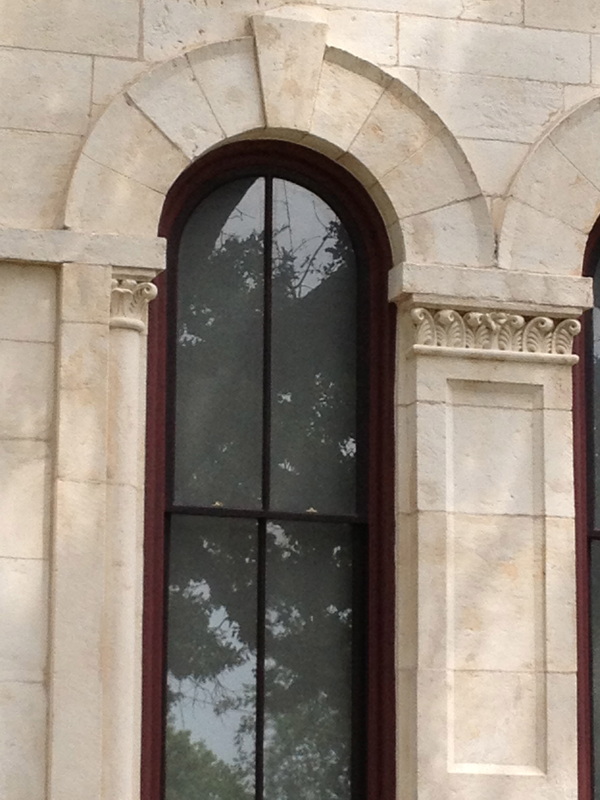 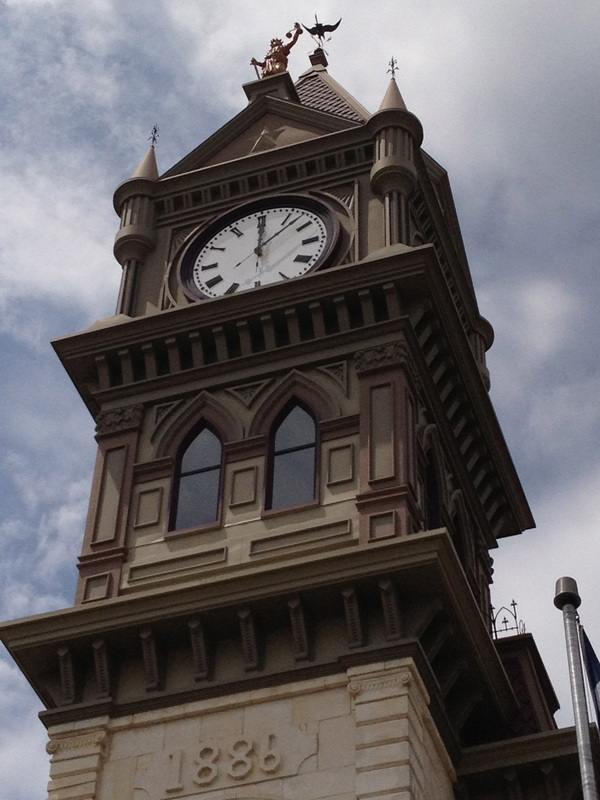 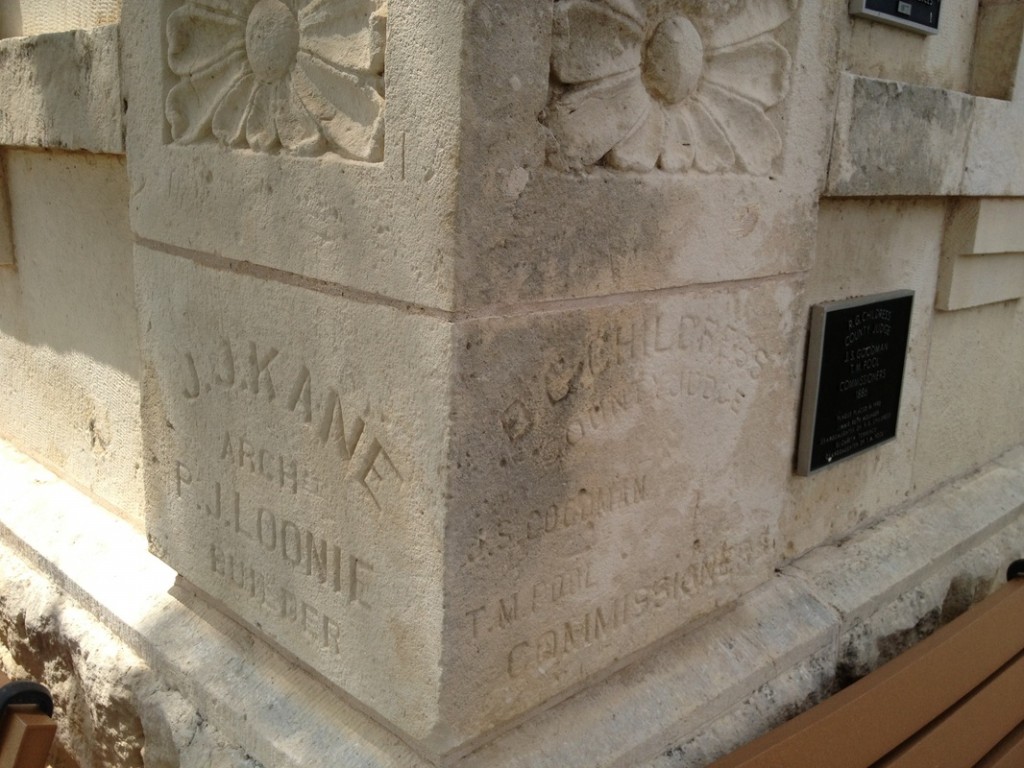 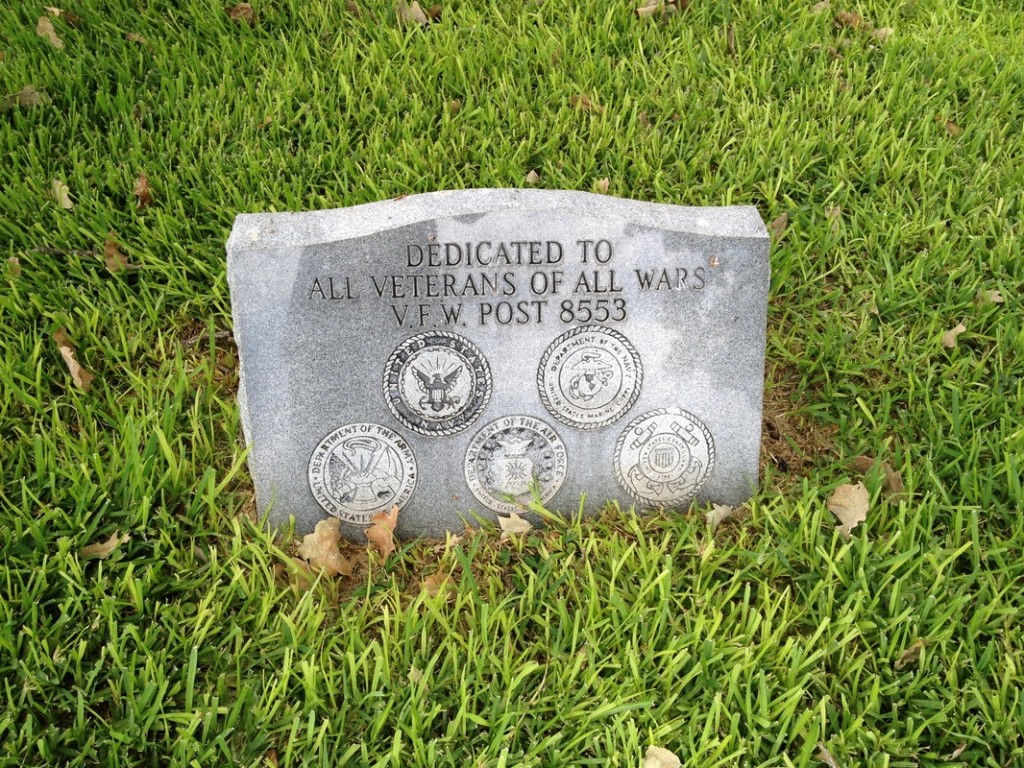