“The county was named for the nearby Brazos River. Bryan is the county seat, and College Station is the other major community in the county. Brazos County is crossed by U.S. Highway 190 and State highways 6, 21, and 30, as well as the Union Pacific railroad. It comprises 588 square miles of rolling prairie and woodland with elevations that range from 200 to 350 feet above sea level.”

“The territory that is now Brazos County was included in Stephen F. Austin‘s second colony and became part of Washington Municipality under the Mexican government. Colonists who sought plantation sites on the Brazos between 1821 and 1831 included Elliot McNeil Millican, Richard Carter, James H. Evetts, Melvan Lanham, Lee C. Smith, and Mordecai Boon. In 1837 most of the area of present-day Brazos County was included in Washington County. The Brazos River, which bisected the latter, proved a serious obstacle to county government, and a new county, Navasota, was formed in January 1841.”

“Federal troops arrived in Millican in June 1865, when Brazos County began almost eight years of Reconstructionturmoil. County blacks and white landowners struggled to work out their new economic and social relations, and a series of Freedmen’s Bureau agents, occasionally backed by small numbers of federal soldiers, attempted to mediate between the groups. While black children attended school for the first time at Millican and at Wilson’s Plantation, whites and blacks quarreled constantly over labor contracts, and interracial violence became increasingly common.” 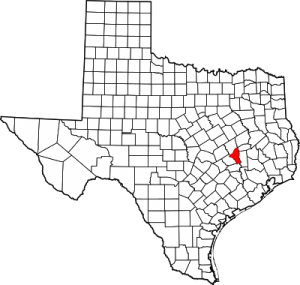 “This strife reached its peak in the Millican race riot of 1868. The Ku Klux Klan made its first appearance in the county in June of that year, when a group of masked men paraded through the black neighborhood in Millican. Armed blacks fired at the Klan members, drove them off, and organized a militia company under the leadership of George Brooks, a black clergyman who had also been active in registering black voters and was much hated by some white county residents.”

“While county residents worked out the social and political problems left by the Civil War, the county prospered and grew. In 1866 the Houston and Texas Central Railroad resumed construction past Millican, and county citizens voted to make a site on the railroad line, the new community of Bryan, their county seat. Both Millican and the former county seat, Boonville, declined rapidly as their inhabitants moved themselves, their goods, and in some cases, the lumber from their homes and stores to Bryan.”

“Beginning in the 1870s substantial numbers of Germans, Austrians, and Czechs (Bohemians) migrated to the county, and Italians began arriving in the 1880s. In 1900 the county population reached 18,859. Of the 10,005 white residents that year, 1,403, or 14 percent, were foreign born, including 553 from Italy, 239 from Germany, and 223 from Bohemia. Settlement and economic growth were hastened in the county by transportation developments in the last decades of the nineteenth century.”

“During the twentieth century, Bryan and College Station played an increasingly important role in the life of the county. After its founding as a railroad town in 1866, Bryan slowly grew to a community of 3,589 in 1900, when approximately one-fifth of county residents lived there. The nearby community of College Station, which grew around Texas A&M after its founding in the 1870s, numbered only 391 inhabitants in 1900. Both communities grew steadily, and by 1940 they had a combined population of 14,026; at that time more than half of the county population lived in the two communities.”

“At the same time that the county was becoming more urban, the building of a network of rural roads in the 1930s and 1940s transformed the Brazos County countryside. As late as 1930 the great majority of the county’s farms, 2,100 of 2,439, were located on dirt roads. Twenty years later only 538 were still on dirt roads. Similarly, though only forty-eight farms had electricity in 1930, rural electrification brought power to most of the county’s farms by the early 1960s. Starting in the 1960s, as Texas A&M University embarked on a major expansion program, much of the rural land in the vicinity of Bryan-College Station was brought into the suburban orbit of the two cities.”

“In 1982, 67 percent of the land was in farms and ranches, with 18 percent of the farmland under cultivation and 20 percent irrigated. Primary crops were hay, cotton, sorghum, oats, and wheat, and primary livestock and products were cattle, hogs, and milk. The industries with the most employment were agribusiness, oil and gas extraction, and construction. In 1980 Brazos County was one of the most densely populated counties in the state.”

“In 2000 the census counted 152,415 people living in Brazos County. About 67 percent were Anglo, 18 percent were Hispanic, and 11 percent were African American. More than 81 percent of residents age twenty-five and older had four years of high school, and 37 percent had college degrees. In the early twenty-first century Texas A&M University played a key role in the area’s economy, and other local companies produced high-tech equipment and services, wine, and other goods; agribusiness was also important.”

“The incorporated towns were Bryan (2000 population, 65,660), College Station (67,890), Wixon Valley (235), Millican (108), and Wellborn (100). Brazos County hosts a number of fall, spring, and summer festivals. The Texas Brazos Trail, which offers tourists scenic views of wildflowers and forests, passes through the county, and there are recreational parks for boating and fishing on several of the county’s lakes and reservoirs. The Texas World Speedway, which opened in 1969, is a local venue for auto racing.”

I was the guest of Brazos County and Bryan on December 29, 2010 and returned to rephotograph the courthouse on May 4, 2014. 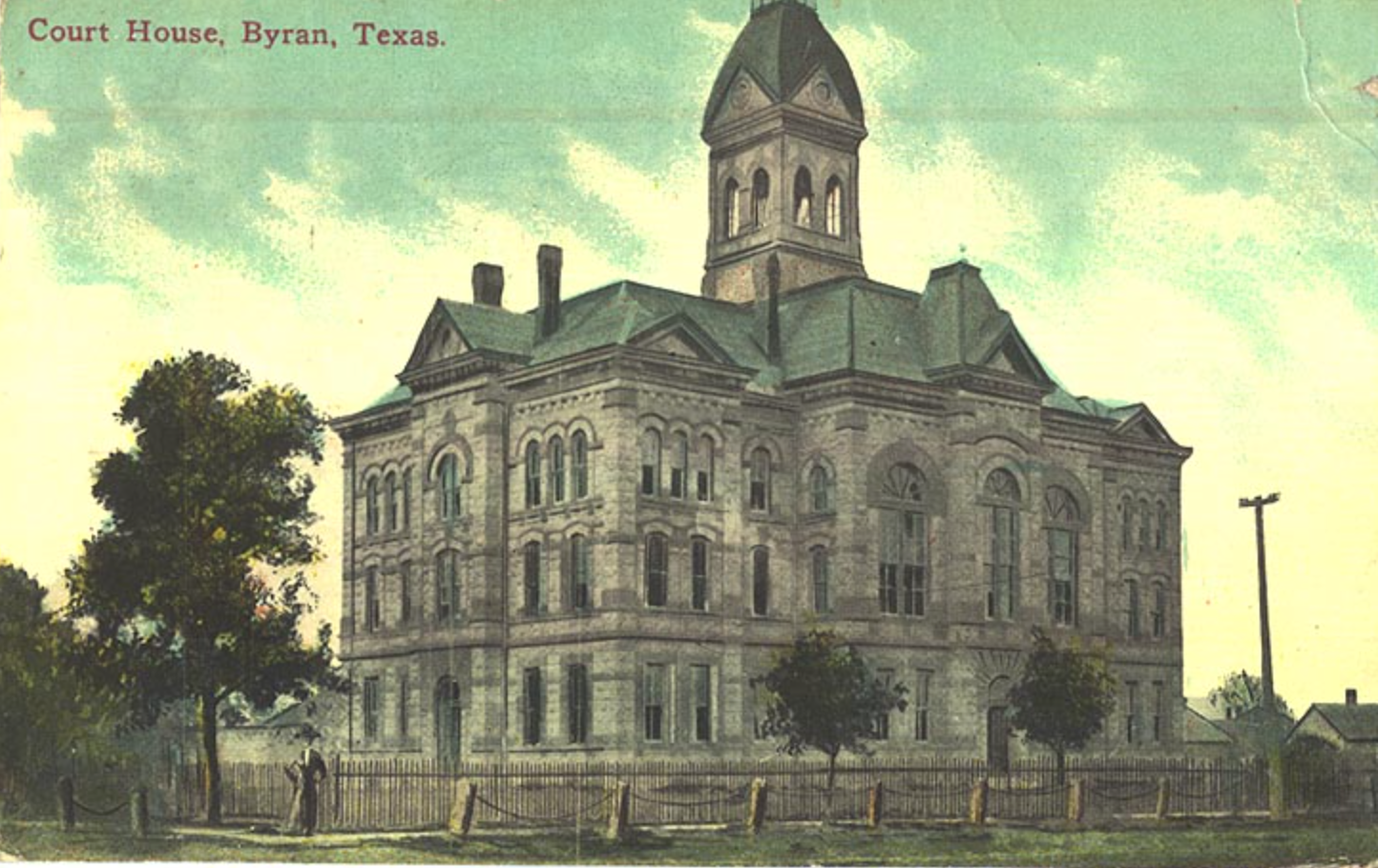 Notice the misspelling of Bryan as “Byran” on this postcard from 1915. 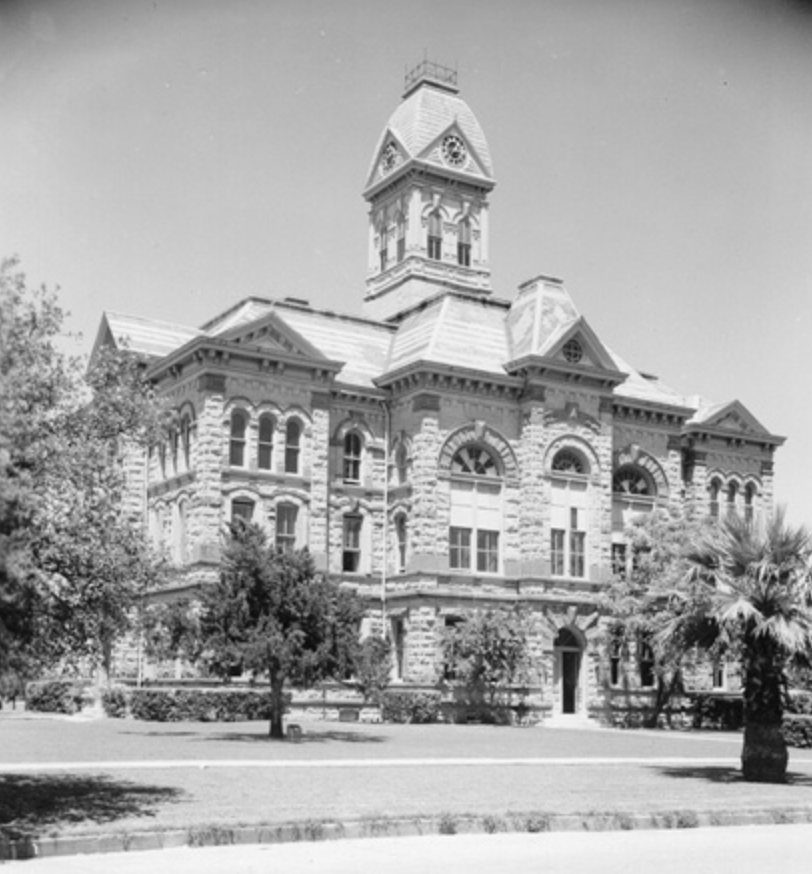 “The building had an oblong plan; two faades were seven-part compositions, rare in Texas, and two were three part. French Mansard roofs with crestings surmounted the massive building, and a tower rose from the center. Polychromatic masonry was used to emphasize the stringcourses, archivolts, entrance arches and pilaster bases and capitals.” - Texas Historical Commission

With influences from both the Richardsonian Romanesque and French Second Empire styles, Eugene T. Heiner put together this courthouse with the construction aid of L.M. Brown.

This absolutely beautiful courthouse was designated “a little Victorian” by some residents of Brazos County, and as the 1950s trend of modernizing architecture swept through Texas, it met a downright shameful fate at the hands of a Ted Hall – led demolition team.

This is one of the saddest stories as far as Texas courthouses go. It didn’t fall by natural fire, arson,  structural problems, or work for the WPA. This was a fully functioning building that had faithfully served the county, and managed to survive the Great Depression years, and yet they still had the indecency and ignorance to tear it down. Shame on them. 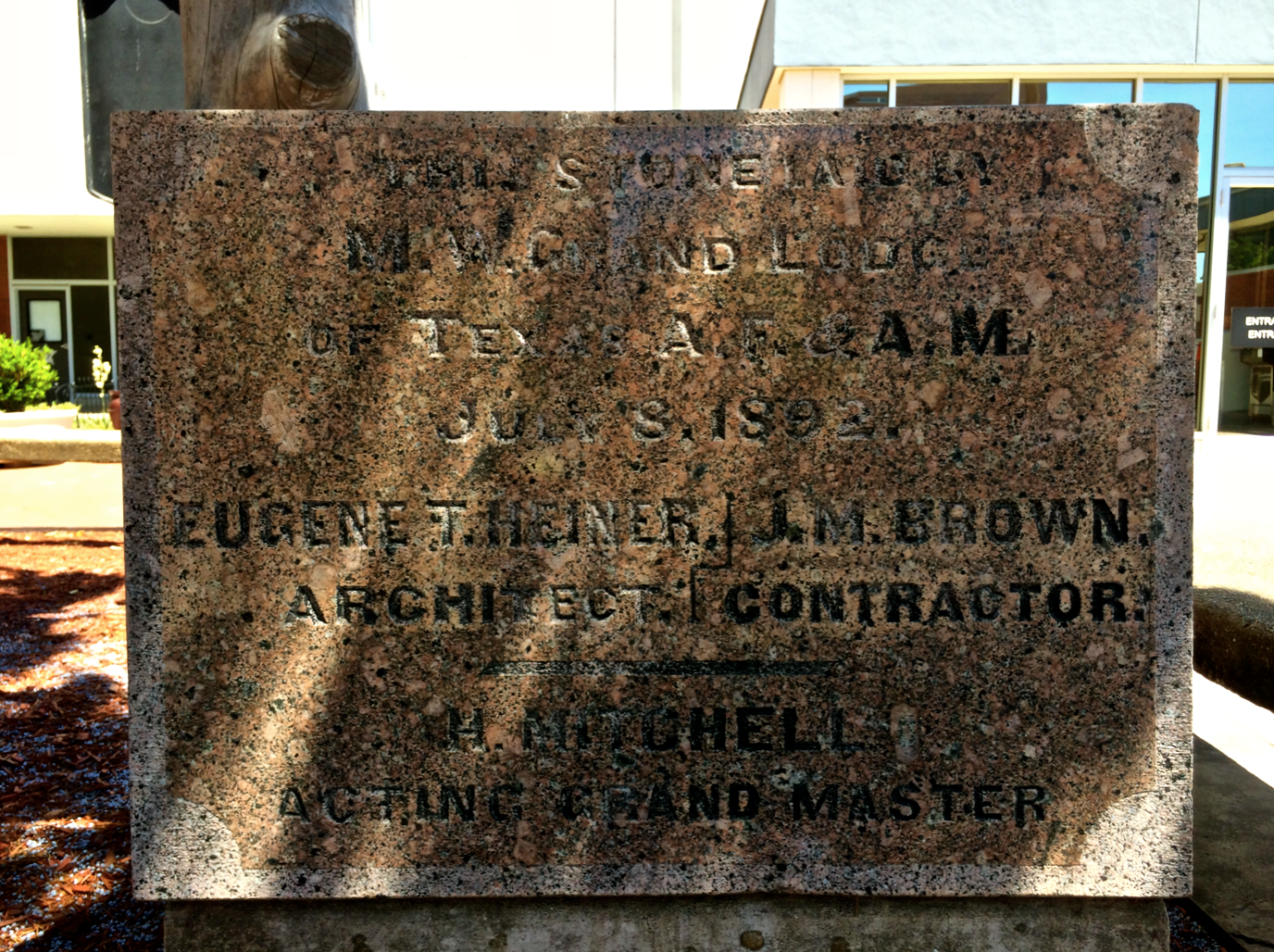 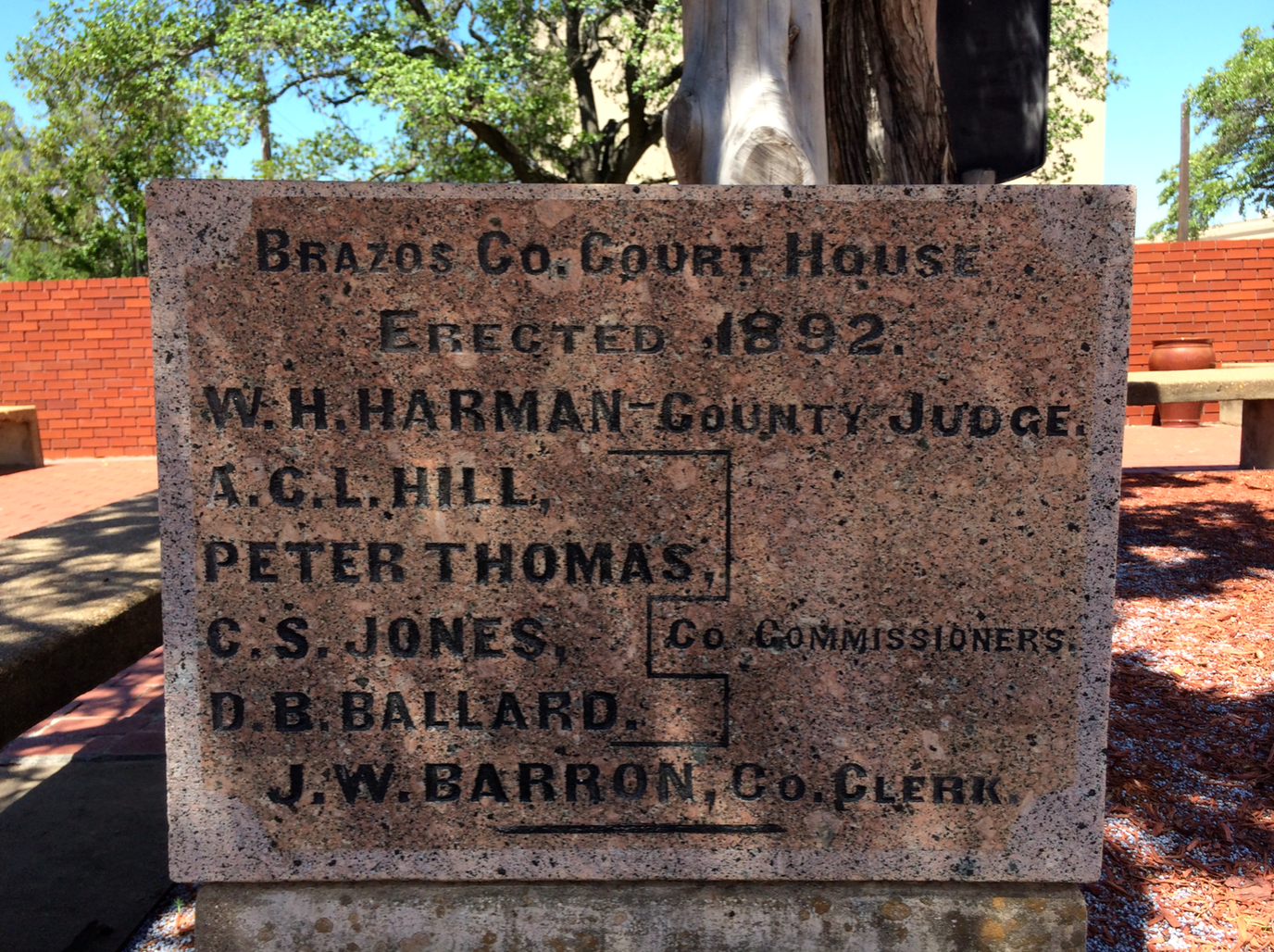 The county preserved its cornerstone as a sick reminder that they tore down the original. Wait until you see what they replaced the Heiner work with… 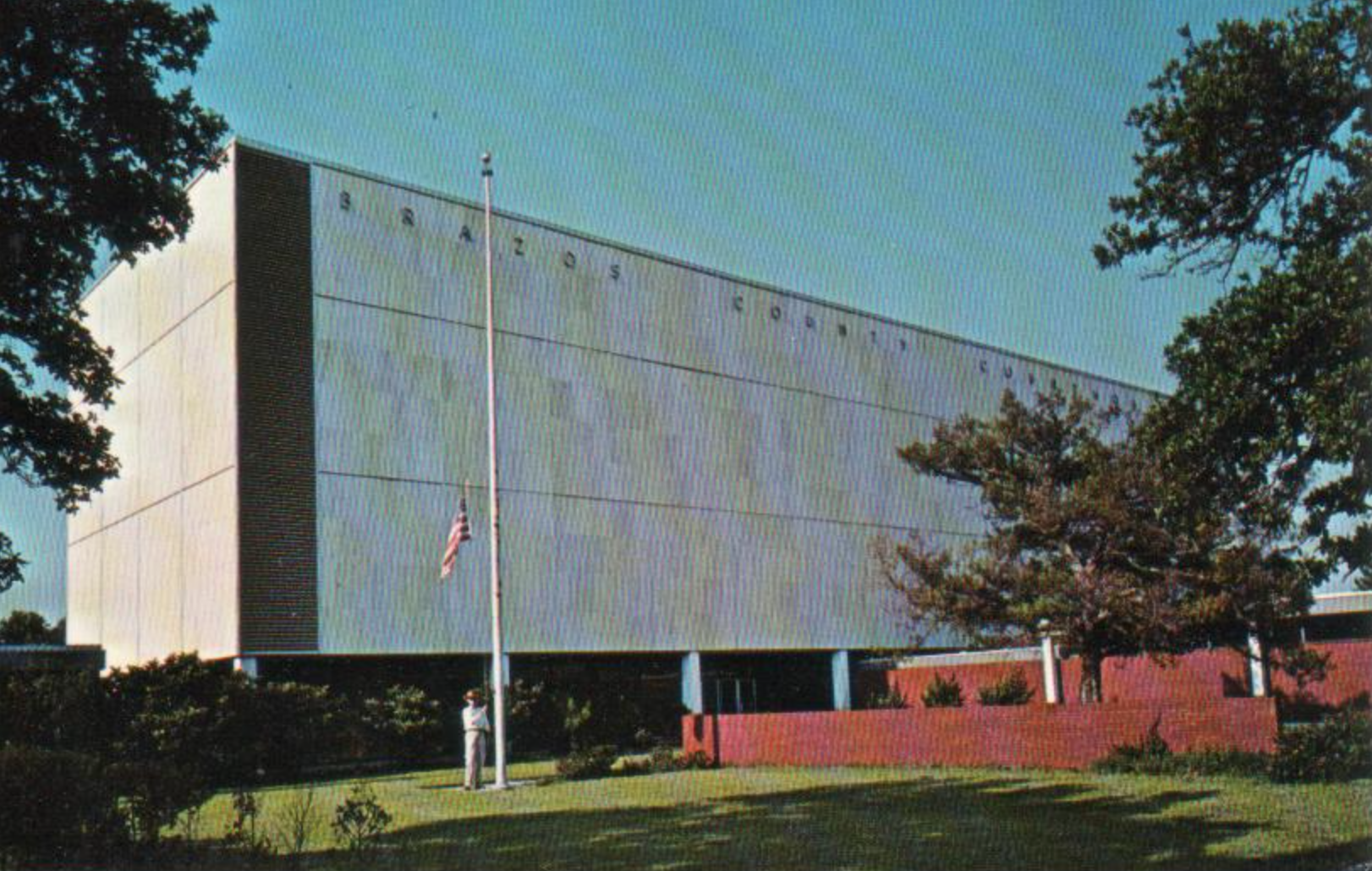 Oh, because this one is so much better, right?

This disgusting and disrespectful conglomeration of stone, brick, and steel was designed by the firm Caudill, Rowlett, & Scott. Get this…it took three architects to design the 1955 version, while it took only one to do the last one. You tell me which is more impressive.

That seems to be the trend of music these days, as well. More writers…less quality. Sigh.

You’ll understand why I don’t have many photos for this travesty. 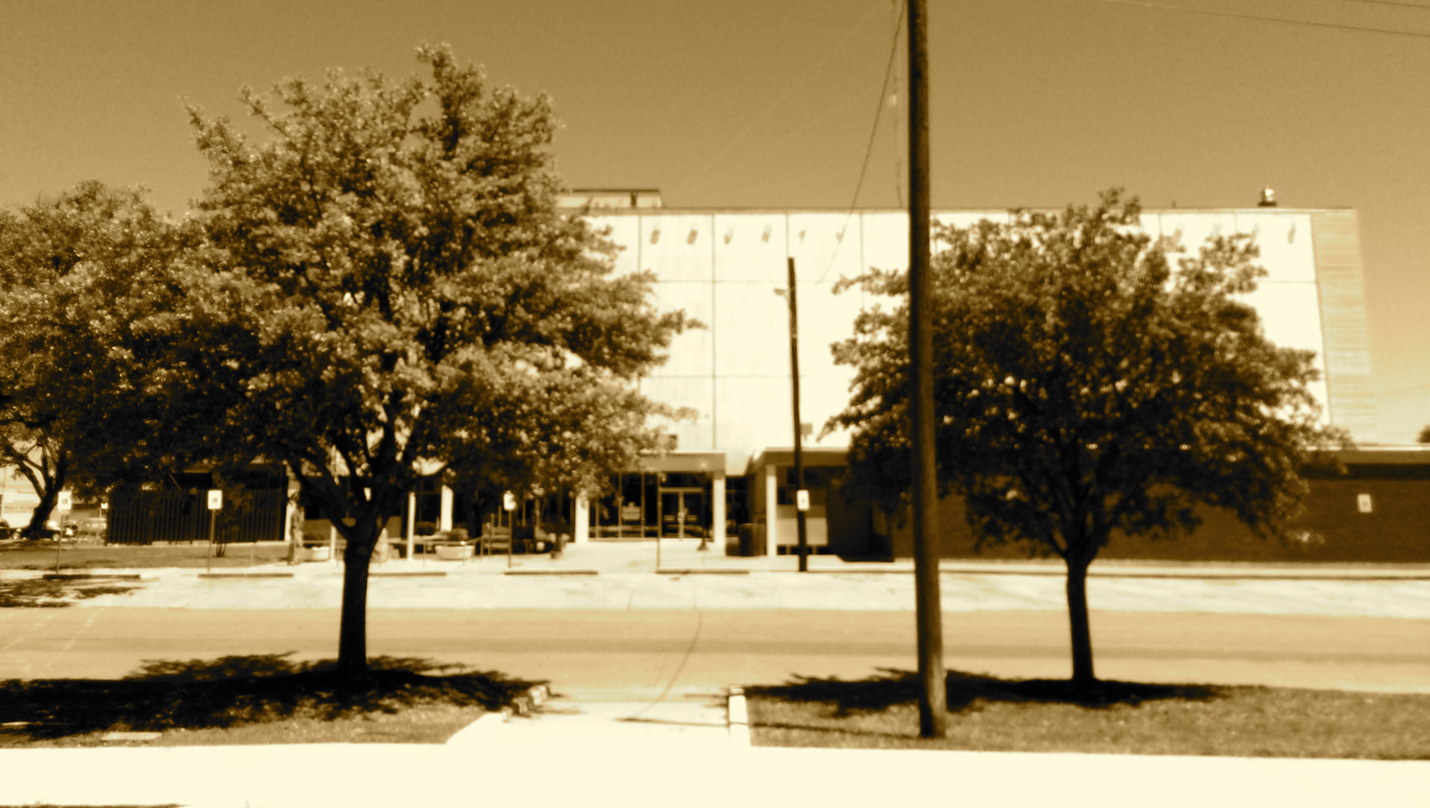 I’m not even sure the sepia tint can help make this look any better. 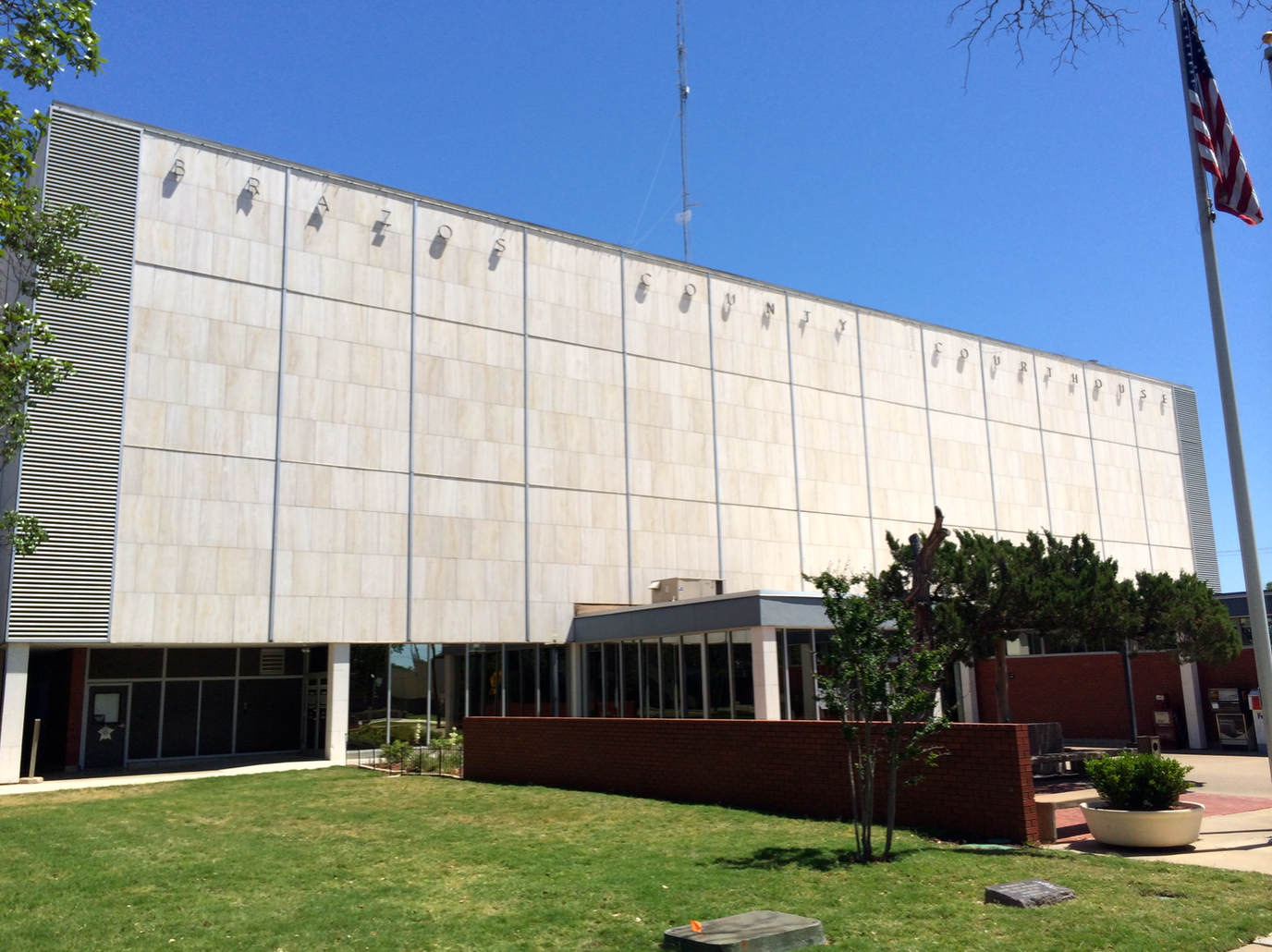 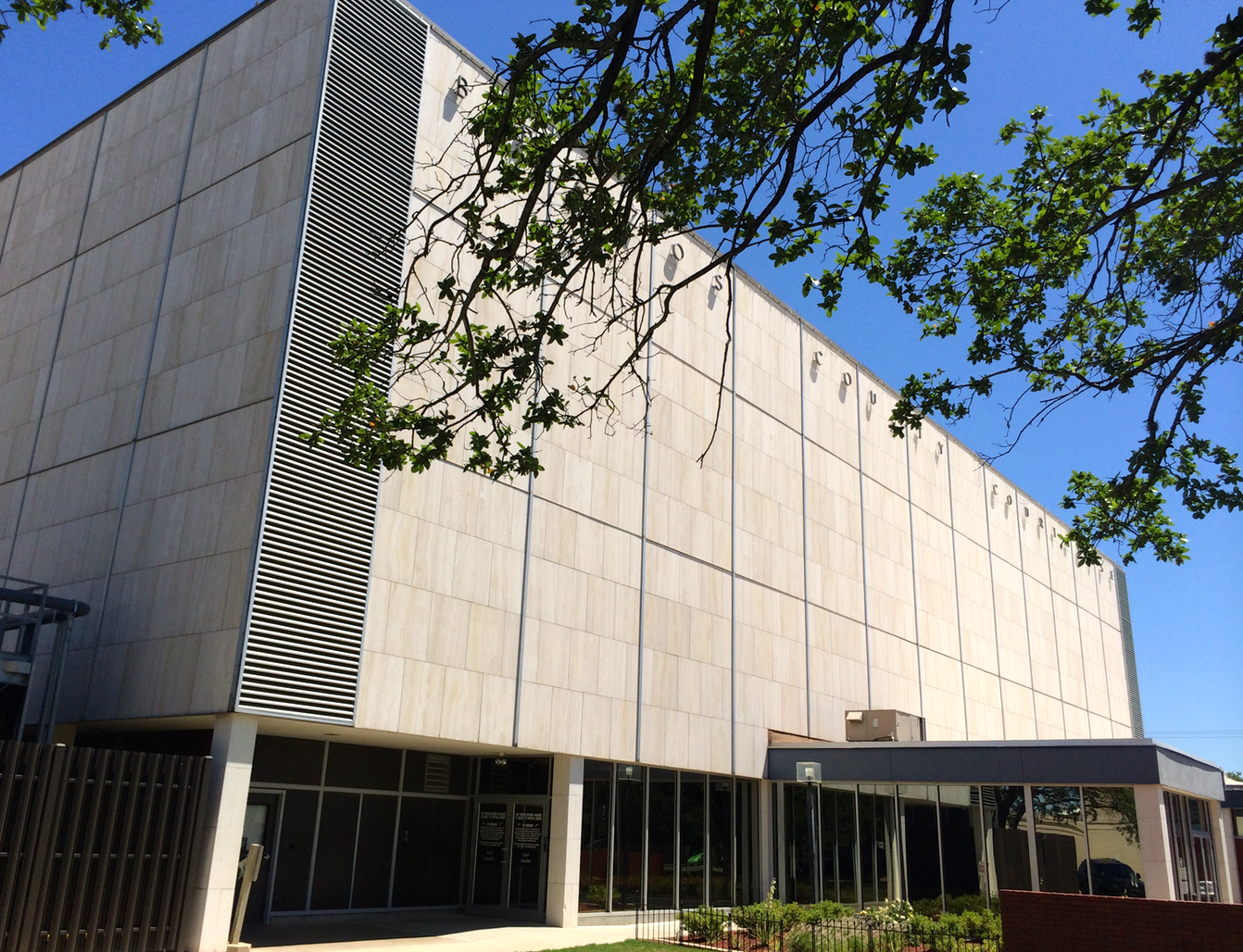 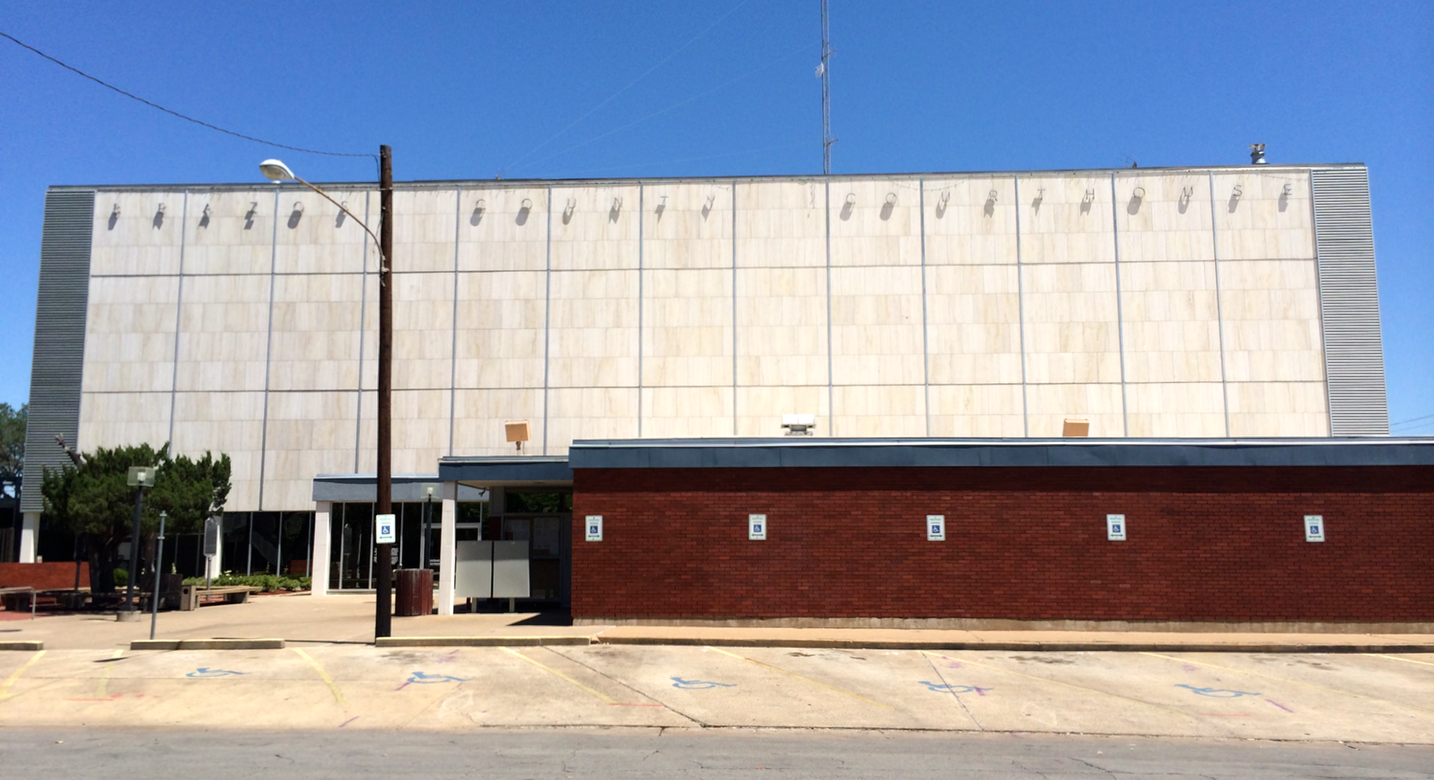 This large and lifeless façade faces south on 26th Street. 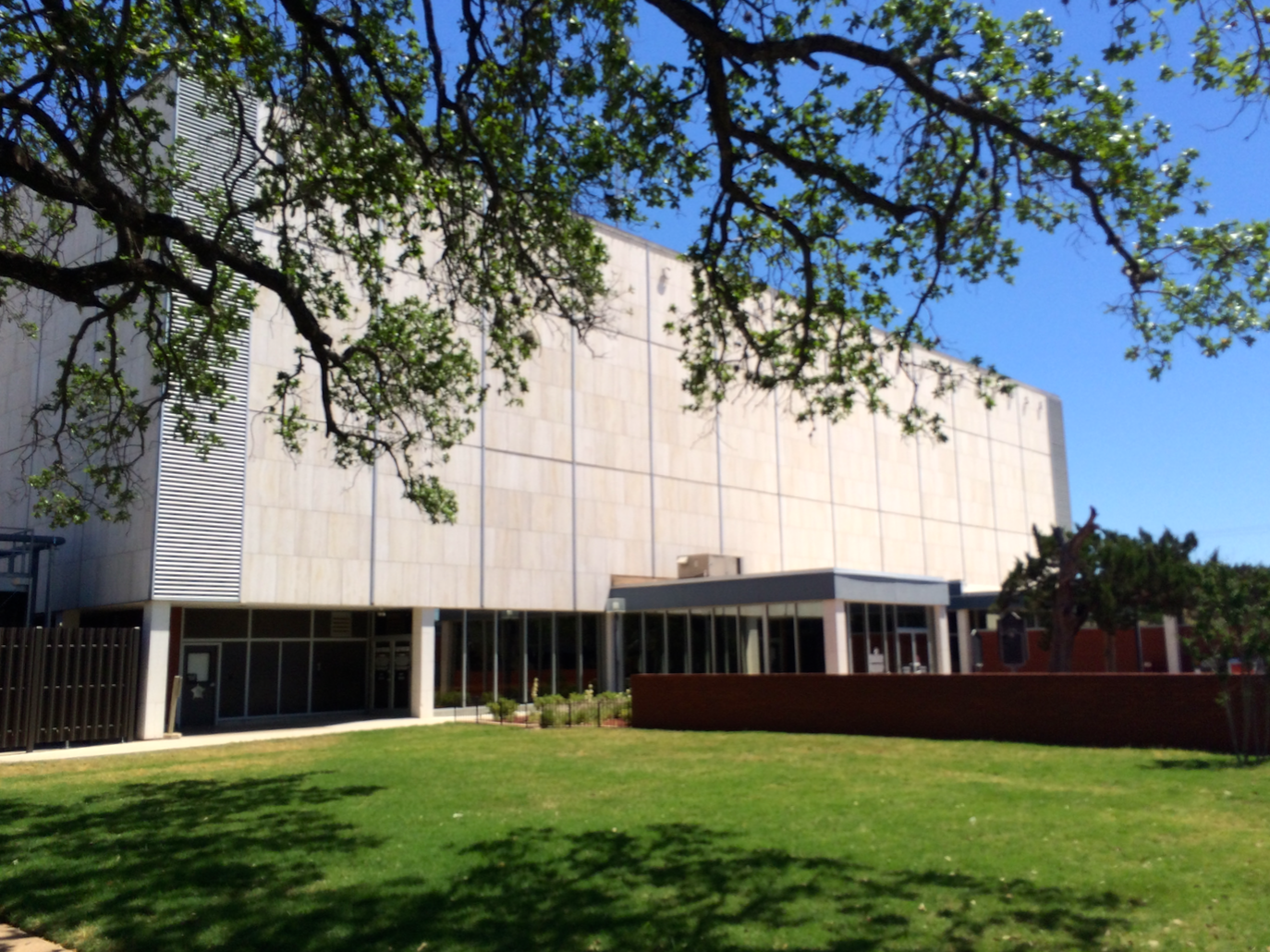 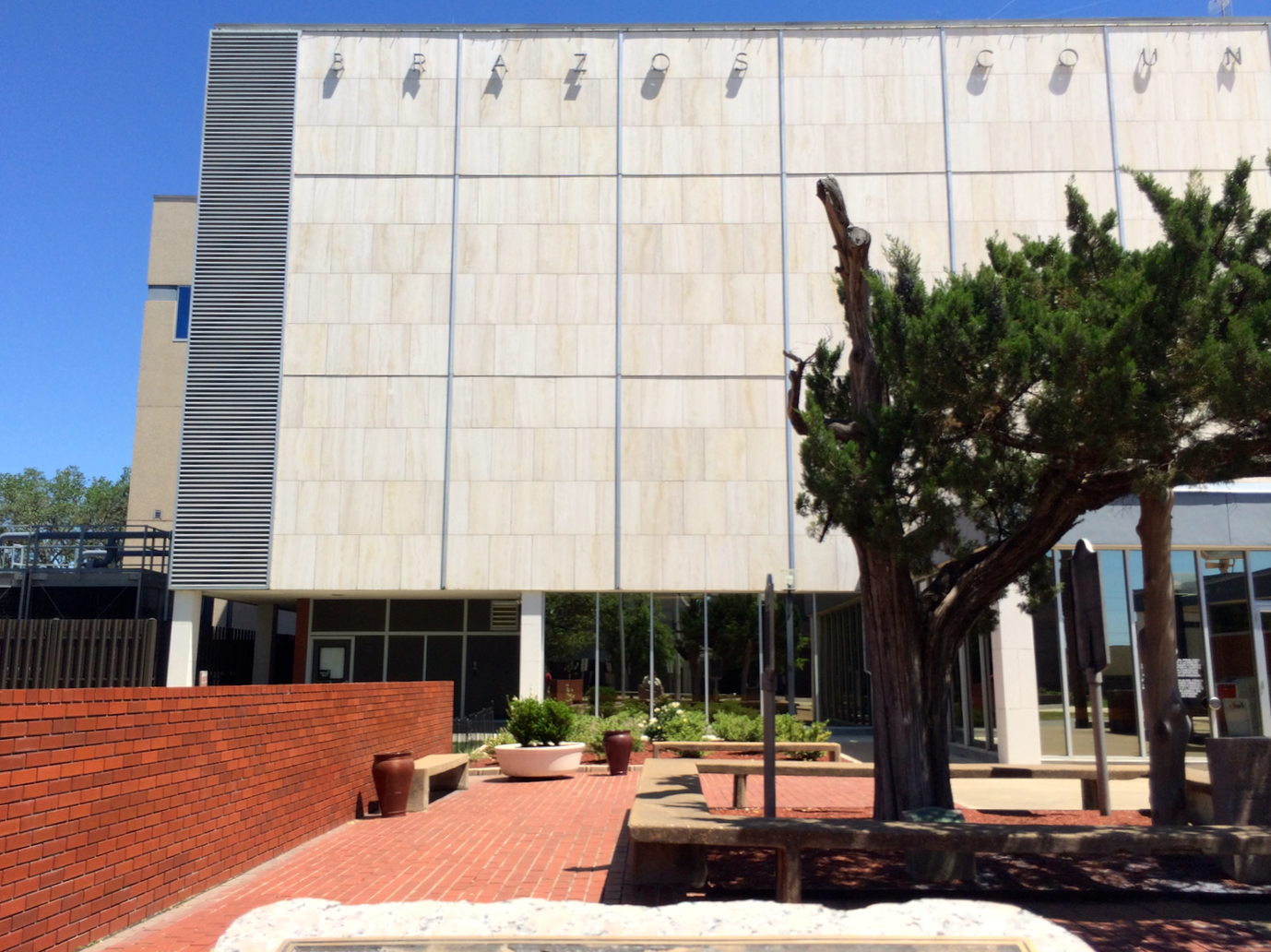 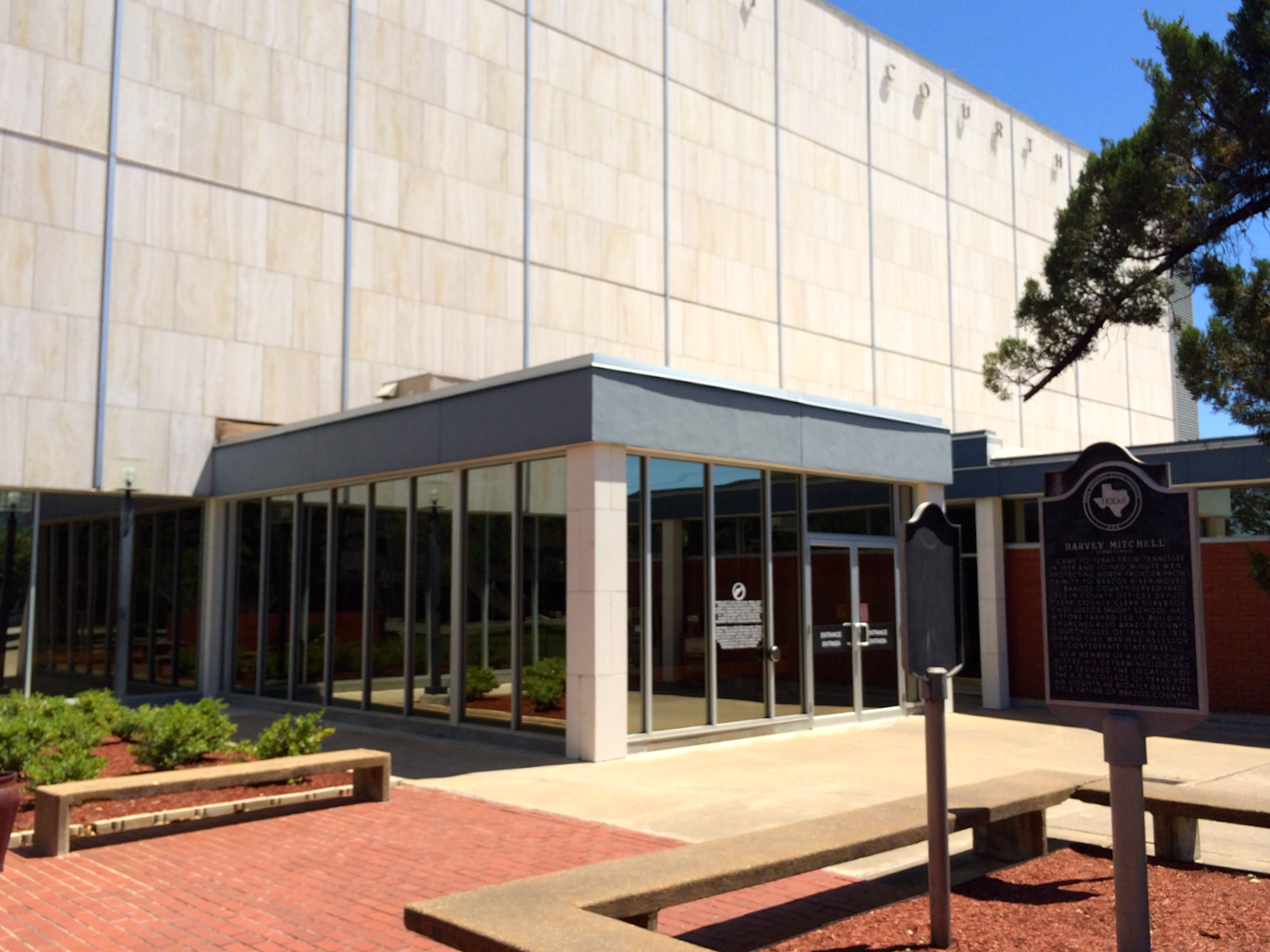 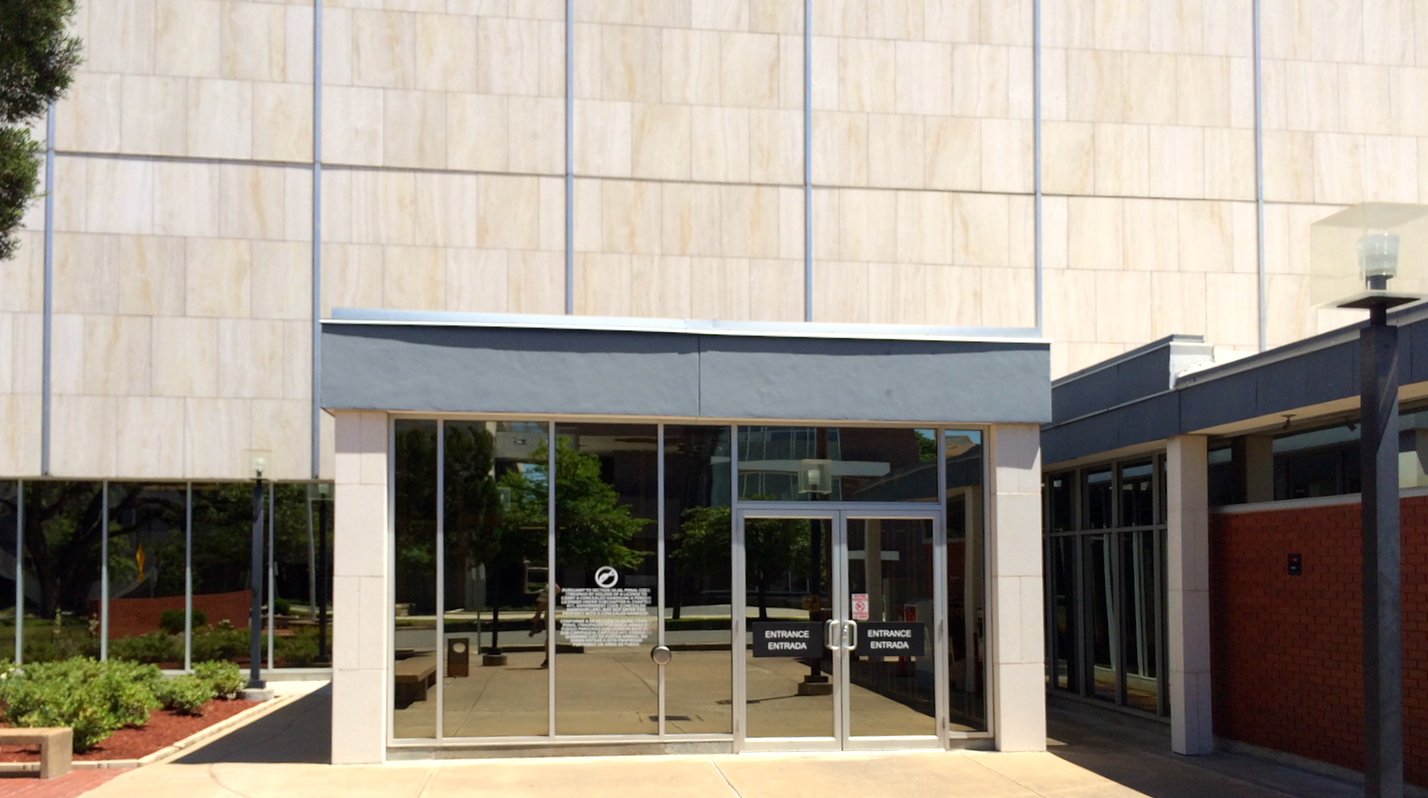 Brazos County, you have my sympathies.