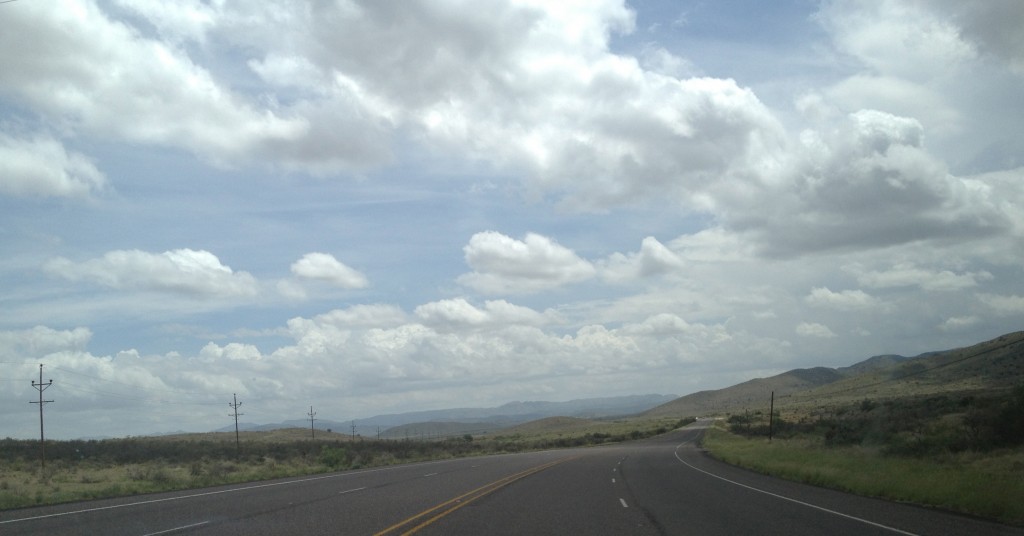 “Brewster County, the largest county in Texas, is located in the Trans-Pecos region of West Texas, and is the site of Big Bend National Park, the largest park in the state.”

“In 1747 Governor Pedro de Rábago y Terán of Coahuila led an expedition into the Chisos Mountains, and in 1772 Lt. Col. Hugo Oconór led an expedition to locate sites for forts along the Rio Grande. Oconor placed Capt. Francisco Martínez in command of the presidio at San Vicente, on the Comanche Trail on the Mexican side of the river. Between 1779 and 1783 Col. Juan de Ugalde organized four assaults on the Mescalero Apaches who had settled in northern Mexico, the last of which drove them back across the Rio Grande and into the Chisos Mountains, where the Spanish pursuit halted.”

“For much of the nineteenth century the presence of Comanche raiding parties on their way to and from Mexico combined with the forbidding local topography to discourage European exploration of the Big Bend.”

“In the autumn of 1852 M. T. W. Chandler, assigned by the United States-Mexico boundary survey to work down the Rio Grande from Presidio del Norte to the mouth of the Pecos River, led a party into what is now the heart of Big Bend National Park. Chandler explored Santa Elena Canyon, the Chisos Mountains (where he named the highest peak after his boss, William H. Emory), Mariscal Canyon, and Boquillas Canyon before giving up due to a shortage of supplies and the weakened condition of his party.”

“In the summer of 1859 a camel expedition under 2d Lt. Edward L. Hartz set out from Fort Davis to explore the Comanche Trail and recommend a possible site for a fort on the Mexican border to protect against Indian raids. Hartz went through Persimmon Gap and down Tornillo Creek to the Rio Grande.” [Yes, you read camels right]

“In response to [Indian] threats, officials at Fort Davis established Camp Peña Colorado a few miles south of the future site of Marathon in 1879. Burgess and such other freighters as August Santleben helped spread the word about the open rangeland available in the Big Bend, and in the 1870s many ranchers from other parts of the state made plans to come west and investigate the area.”

“The burgeoning cattle industry got a major boost in 1882, when the Galveston, Harrisburg and San Antonio Railway built through the area. Suddenly the gradual influx of cattlemen became a veritable flood, as a number of surveyors who had come with the railroad, and the Texas Rangers who had been assigned to protect them, elected to stay. Among them were such men as Alfred S. Gage, James B. Gillett, and Joseph D. Jackson, who soon became the leading citizens of Brewster County.”

“Initially, at least, ranchers generally settled in the northern part of what is now Brewster County, for ease of shipping their cattle via the railroad; the Gage Ranch and the G4 Ranch, started in the mid-to-early 1880s, were the first major cattle operations in what is now southern Brewster County, and Gage soon moved north to be nearer the railhead. Several towns sprang up along the rails, the most significant of which were Alpine, then called Murphyville, and Marathon.”

“About this time the mercury-mining industry exploded in southern Brewster County. Scattered agricultural communities had existed for years on both sides of the Rio Grande, but had been largely ignored by the county government in Alpine, due to their isolated position and relatively small and heavily Hispanic populations. In 1884, however, a Presidio merchant named Ignatz Kleinman made the first significant discovery of mercury in the Big Bend, setting off a mining boom that made the Terlingua Mining District one of the leading sources of mercury in the nation in the first half of the twentieth century.”

“The dominant personality in the development of mercury mining in Brewster County was Chicago shoe manufacturer Howard E. Perry, whom the local Mexican Americans punningly nicknamed “El Perrito” (the little dog) for his tenacity. Perry built his Chisos Mining Company, established in 1903, into one of the largest mercury mines in the nation; by 1905, it was supplying 20 percent of the mercury in the United States.”

“The isolated position of many of the mining and industrial settlements that grew up in southern Brewster County made them tempting targets for raiders from Mexico, especially during the turbulent early years of the Mexican Revolution. As early as the spring of 1912, J. O. Langford, who owned a resort at Hot Springs, on the Rio Grande, was asking for military protection from bandits from across the river. In response to such needs, troops were stationed at several locations in the Big Bend. The mere presence of a handful of troops, however, did not eliminate the threat. Perhaps the most famous incursion from across the Rio Grande was the Glenn Spring Raid of May 5, 1916, in which bandits overwhelmed nine cavalrymen posted at Glenn Spring to protect against just such an event.”

“After World War I raiders from Mexico became less of a problem, at least in part because many of the mines and wax factories that had tempted them were played out. The population of Brewster County dropped from 5,220 to 4,822 between 1910 and 1920. Cattle ranching remained an important local industry, however, and the Highland Hereford Breeders Association was organized in 1918 to promote the cattle ranched in Brewster and Jeff Davis counties.”

“In the 1930s, however, the local cattle industry was hit hard by depression and drought, and the population of Brewster County dropped from 6,624 to 6,478. Despite the efforts of the Federal Emergency Relief Administration, most Big Bend ranchers were forced to shoot their stock because they could neither feed nor move them, and the number of cattle dropped from 91,143 to 39,488 by the end of the decade.”

“By 1936 many local cattlemen had given up ranching and moved away, and much of their land eventually ended up in Big Bend National Park.”

“The history of the park begins in February 1933, when State Representative Everett Ewing Townsend cosponsored a bill for the establishment of Texas Canyons State Park. On October 27, 1933, Governor Miriam A. Ferguson signed legislation establishing a greatly expanded Big Bend State Park. In May 1934 the Civilian Conservation Corps established a camp in the Chisos Mountains basin. The camp, eighty-five miles from the nearest town, was the temporary home of more than 200 laborers, mostly Hispanic. Their first project was to build a seven-mile road into the mountains using no power equipment. The federal presence in the Big Bend led the citizens of Brewster County to press for the establishment of a national park, and in June 1935 Congress passed legislation founding Big Bend National Park. Acquiring the land for the park was a long and often frustrating process, but it finally opened to the public in June 1944.”

“In 1952 Houston oilman Walter M. Mischer began buying land around Lajitas, in southwestern Brewster County, and in 1976 he began “reconstructing” a Wild West town that had never existed, complete with condominiums, motels, restaurants, and shops, next to old Lajitas, the true ghost town. The World Championship Chili Cookoff at Terlingua began as a tongue-in-cheek challenge between Wick Fowler and humorist H. Allen Smith in 1967 and has become a November tradition, celebrated across the state and nation. In 1988 the state of Texas doubled the size of its state park system when it bought the Big Bend Ranch, in southwestern Brewster and southeastern Presidio counties; the resulting Big Bend Ranch State Natural Area opened to the public in January 1991.”

“In the early 1980s Brewster County was fifty-third among United States counties in land area, and one of the most sparsely populated in Texas. The largest ancestry groups were Hispanic and English, both at 43 percent. In 1990 the population was 8,681. As of 2014, the population was 9,173. The largest town, Alpine, had 5,951 residents. The Brewster County economy has become increasingly dependent on tourism.” 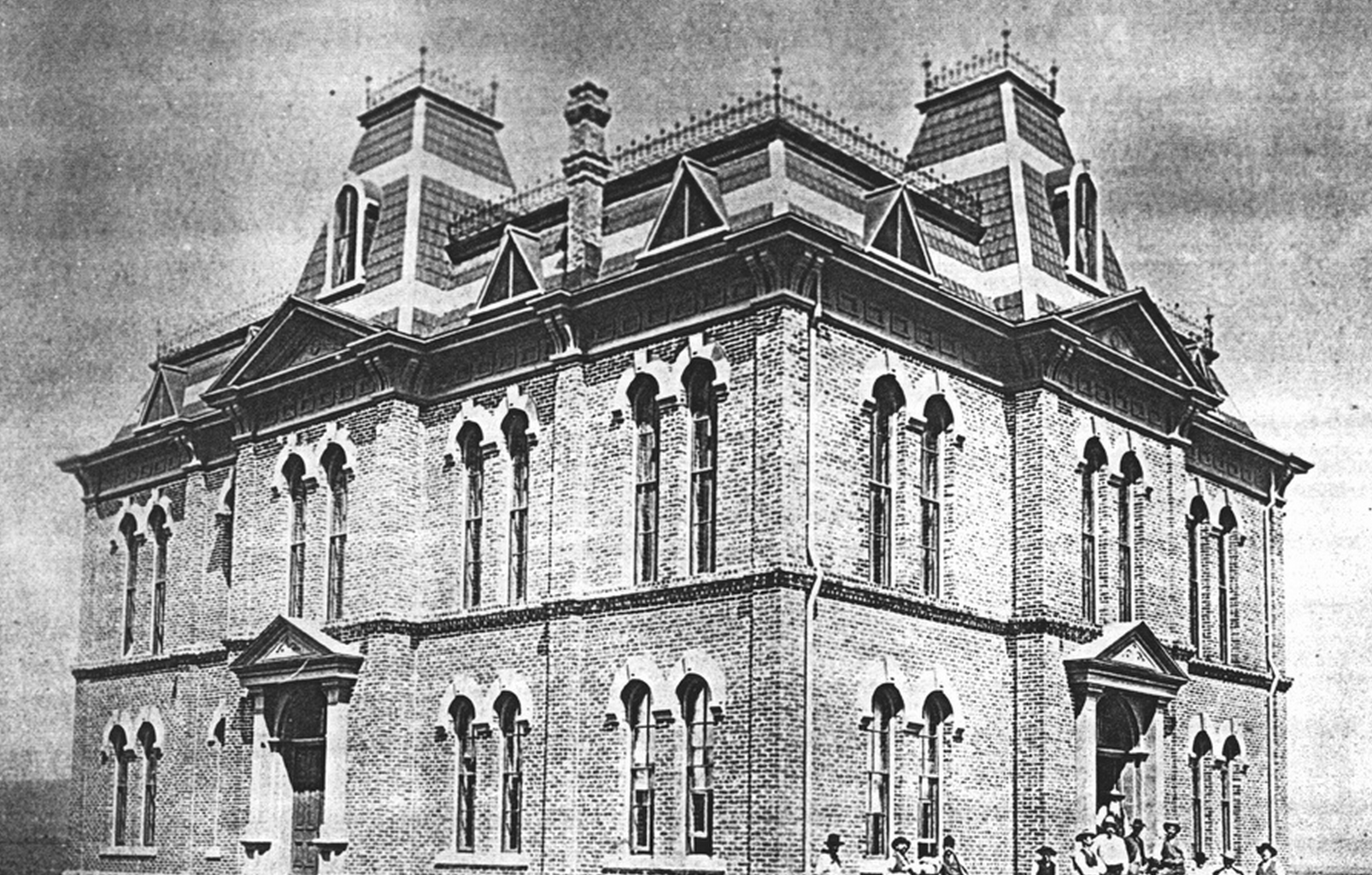 “Constructed in 1887 in West Texas, the Brewster County Courthouse is an interesting local “vernacular” interpretation of an architectural idiom which was to become known as the American Second Empire Style. [The design was provided by architect Tom Lovell.] This two-and-one- half story brick building laid in Common bond is rectangular in massing with thin, elongated pavilions advancing slightly from the center of each facade. No corner towers, which would be expected in this style, are in evidence. All four facades are comprised of pairs of elongated, round arch window openings surmounted by curved, pressed-tin hood molds with a single voussoir on center. The window openings on the second story are slightly longer than those on the first story. Each bay of paired windows is delineated by vertical brick strips or referential pilasters. The Brewster County Courthouse rests on a small base of rusticated local limestone with a brick belt-course separating the facades between the first and second stories. The shorter east and west facades are comprised of three bays of paired round arch window openings with a pressed-tin “frontispiece” doorway on the first floor pavilion comprised of a triangular pediment supported on single Doric pilasters resting on single paneled podiums, and a semicircular, two-pane light over paneled, wooden double doors. The longer north and south facades are comprised of two stories of five bays of paired round arch windows with similar pilaster strips. The north facade has no doorway and the recent addition of a two-story brick wing to the northwest half of this facade has obscured the two northwest bays and part of the north pavilion. The south facade has a similar pressed-tin “frontispiece” doorway, although the door itself has been removed and replaced with a twentieth century aluminum frame window. All original window frames (wooden, double-hung, four-over-four-light sash) have survived, with the exception of those on the second story of the east facade and portions of the second stories of the north and south facades. These have been replaced with fixed wooden shutters. A pressed-tin entablature, comprised of a paneled frieze and a cornice, surmounts the building. Pairs of pressed-tin brackets are incorporated within the entablature and reflect the spacing of the brick pilaster strips below and serve as referential (or interpretative) capitals to them. Pressed-tin triangular pediments crown the pavilions throughout. The radically hipped, wood-framed, pyramidal roof of standing-seam-tin is capped by pressed-tin cresting in the pattern of a cornice. Triangular, two-paned dormers punctuate the roof line: four each on the north and south facades and two each on the east and west facades. Originally, each pavilion was capped with a large attenuated Mansard-like roof with a single round arch four-light window. These, however, were removed in the second half of this century. The first floor of the wood-frame interior is bisected by a center hall on the east/west axis dividing offices equally on both sides. Exemplary pressed-tin ceilings and some of the original woodwork have survived. A handsome wooden staircase with “Eastlake-like” details rises from the first floor to the General Courtroom on the second floor. Extensive remodeling has taken place on the second floor. However, much of the original fabric has been maintained beneath the new paneling and above the newly lowered ceilings.” – National Register Narrative 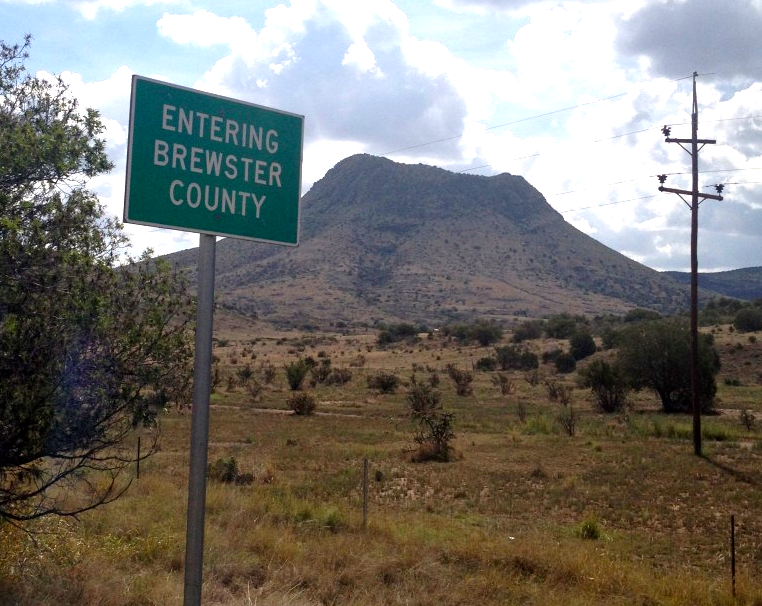 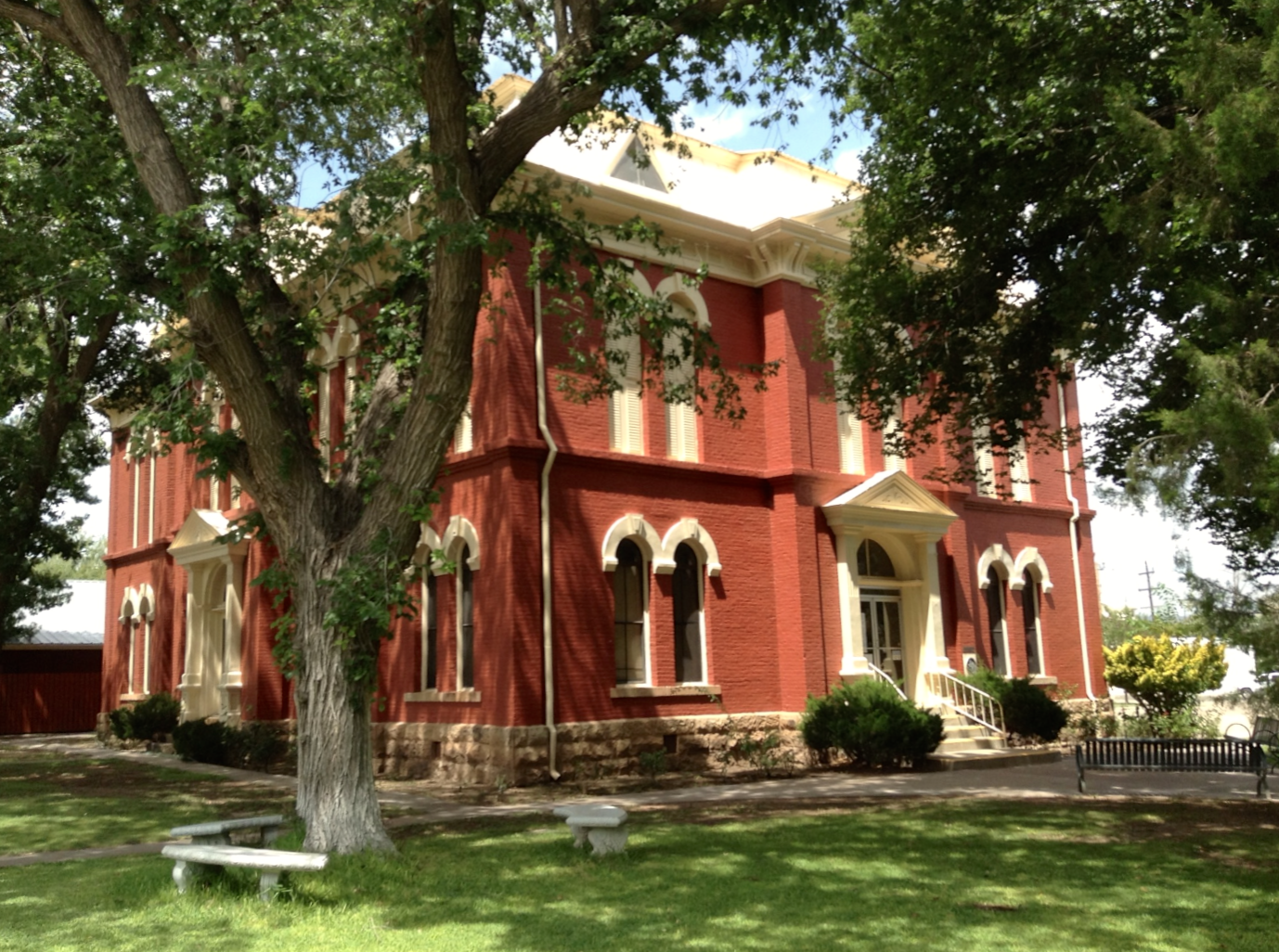 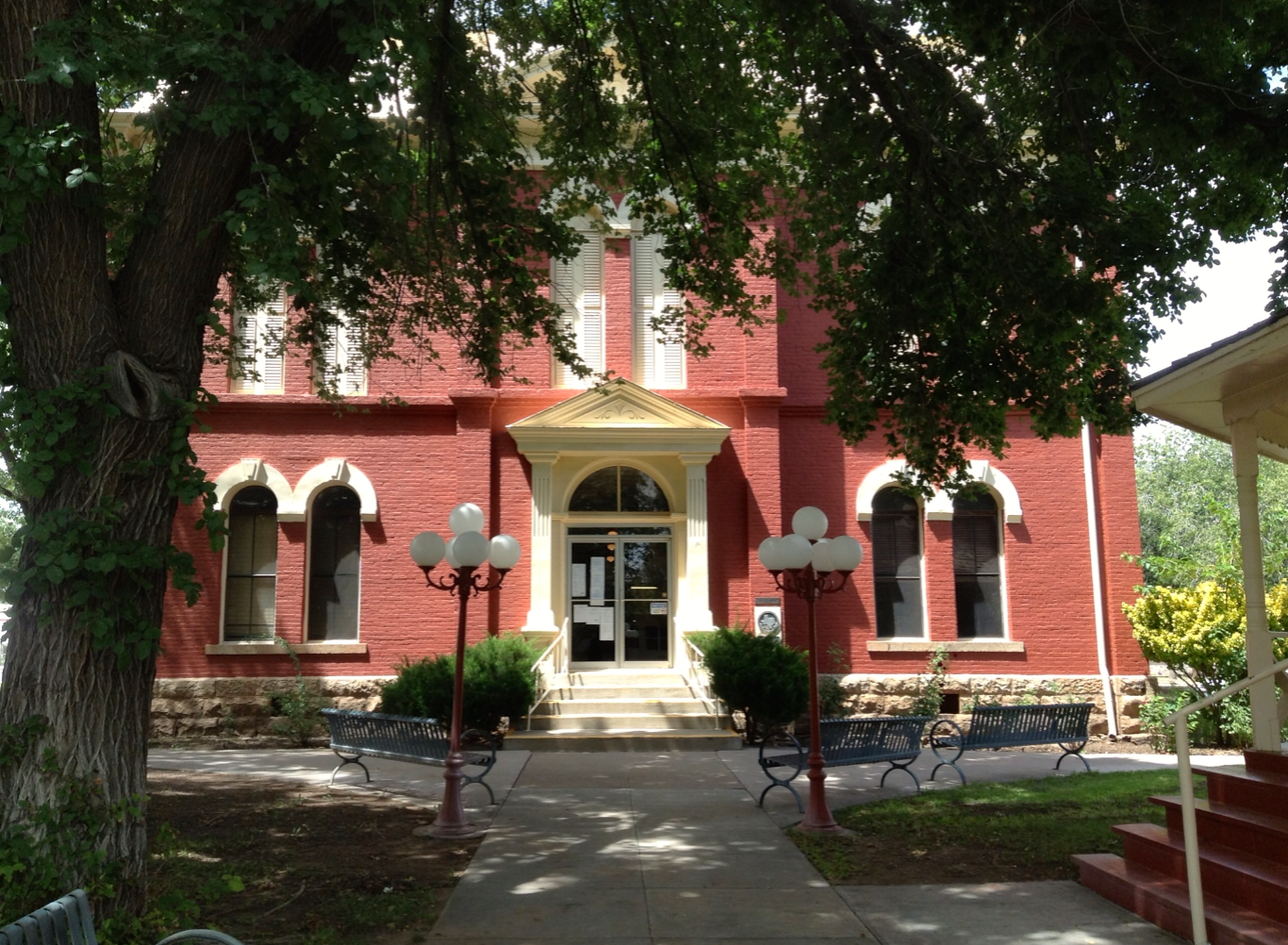 The western façade (and only accessible entrance) of the original courthouse 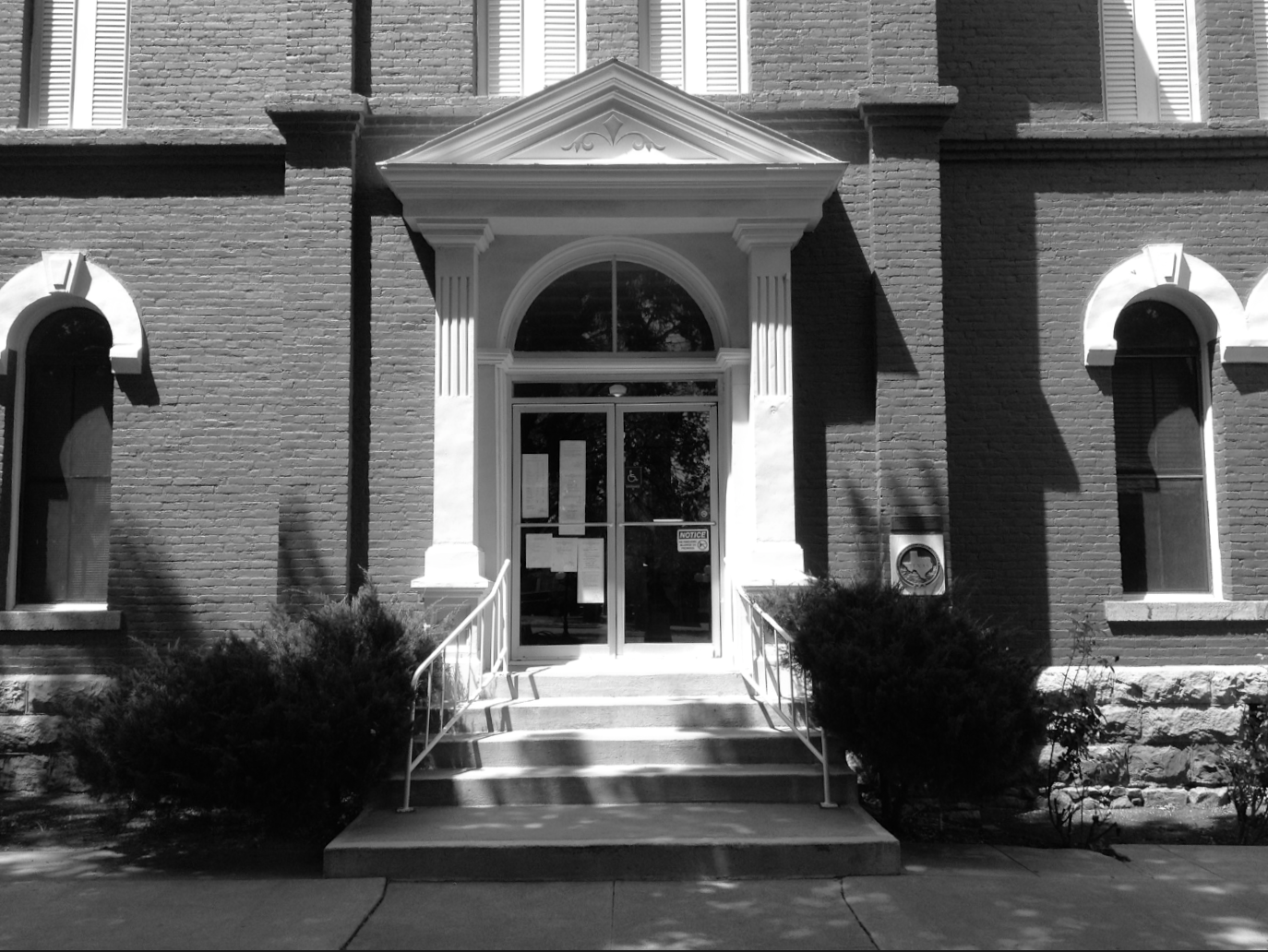 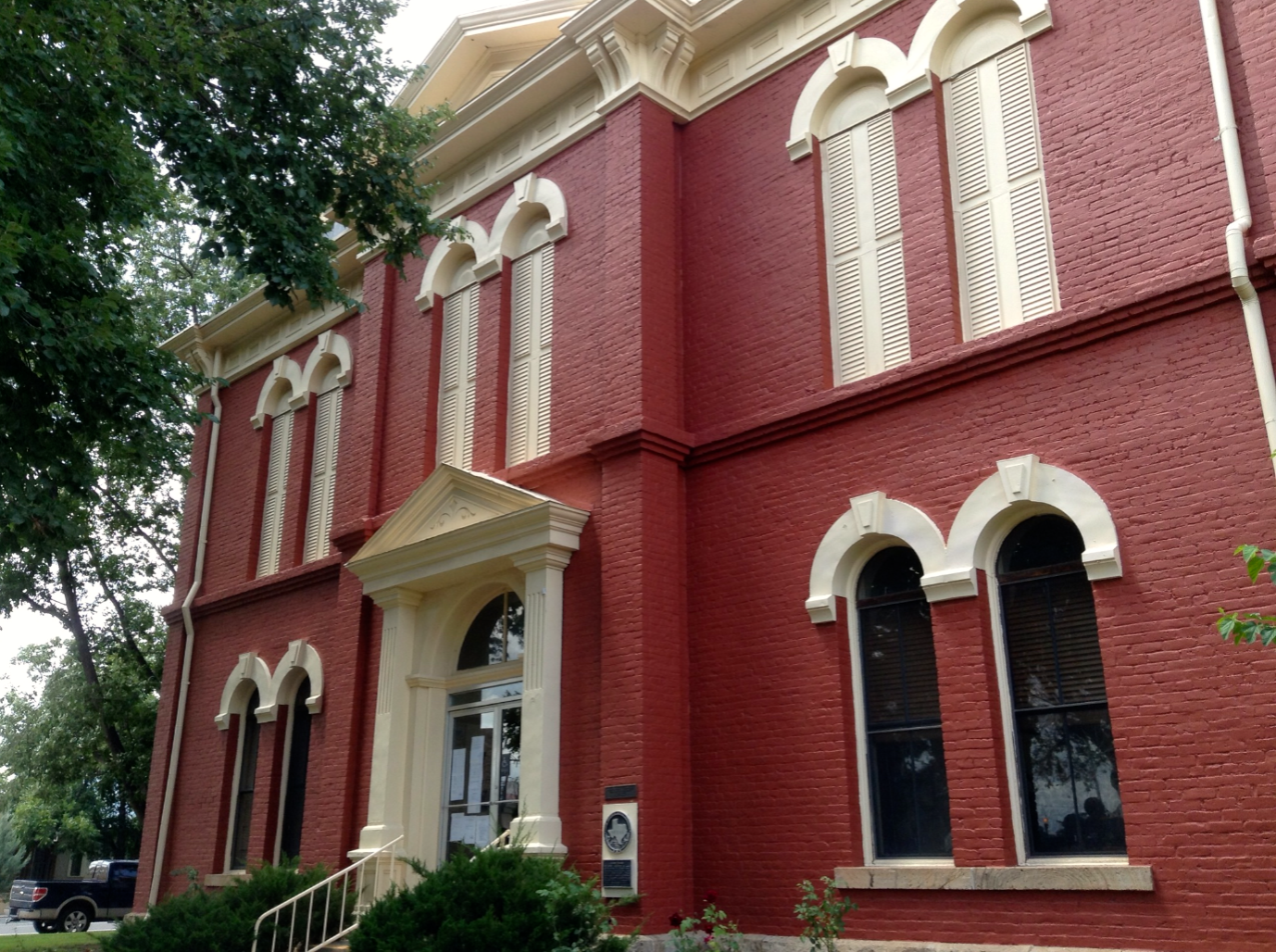 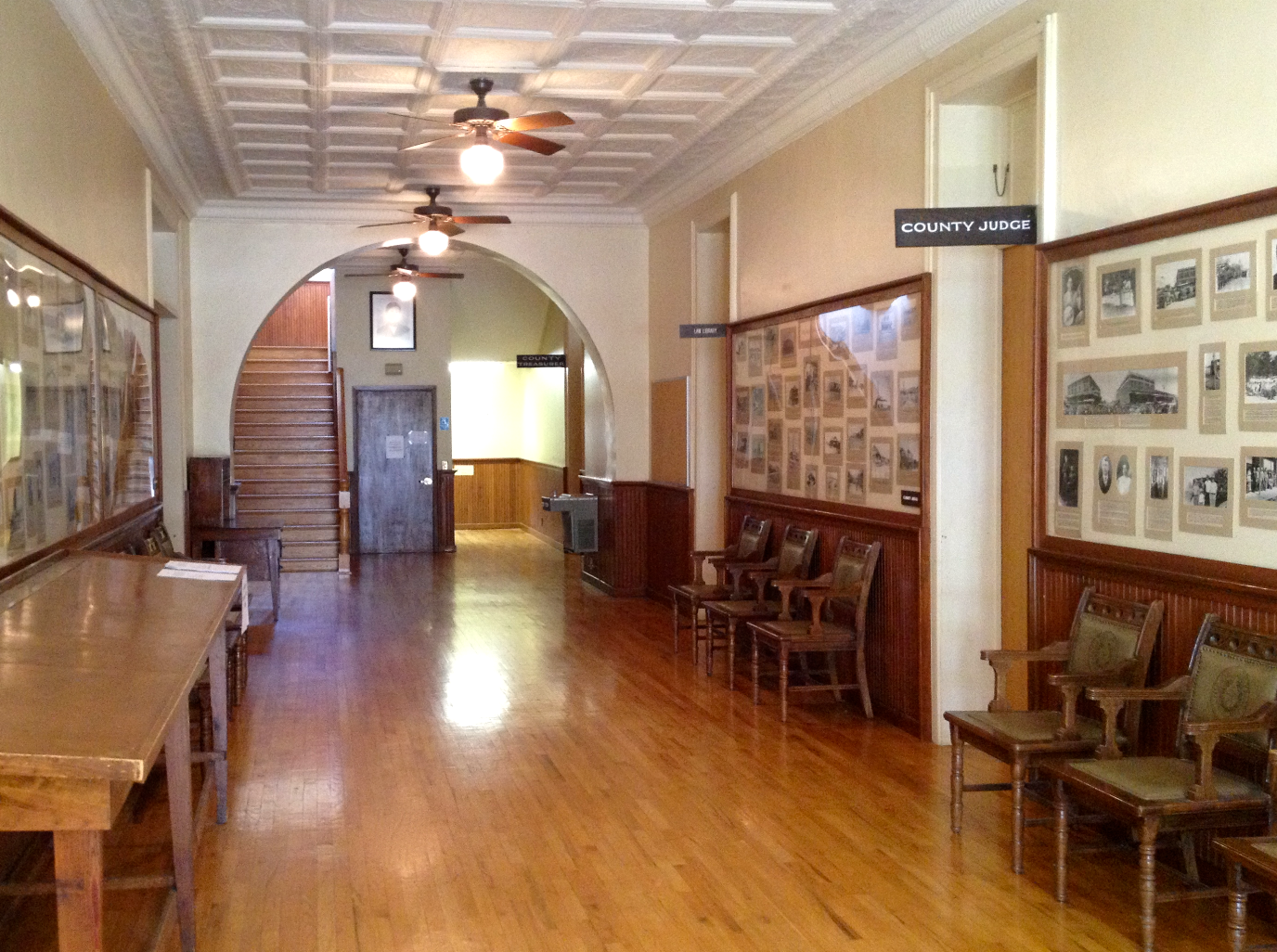 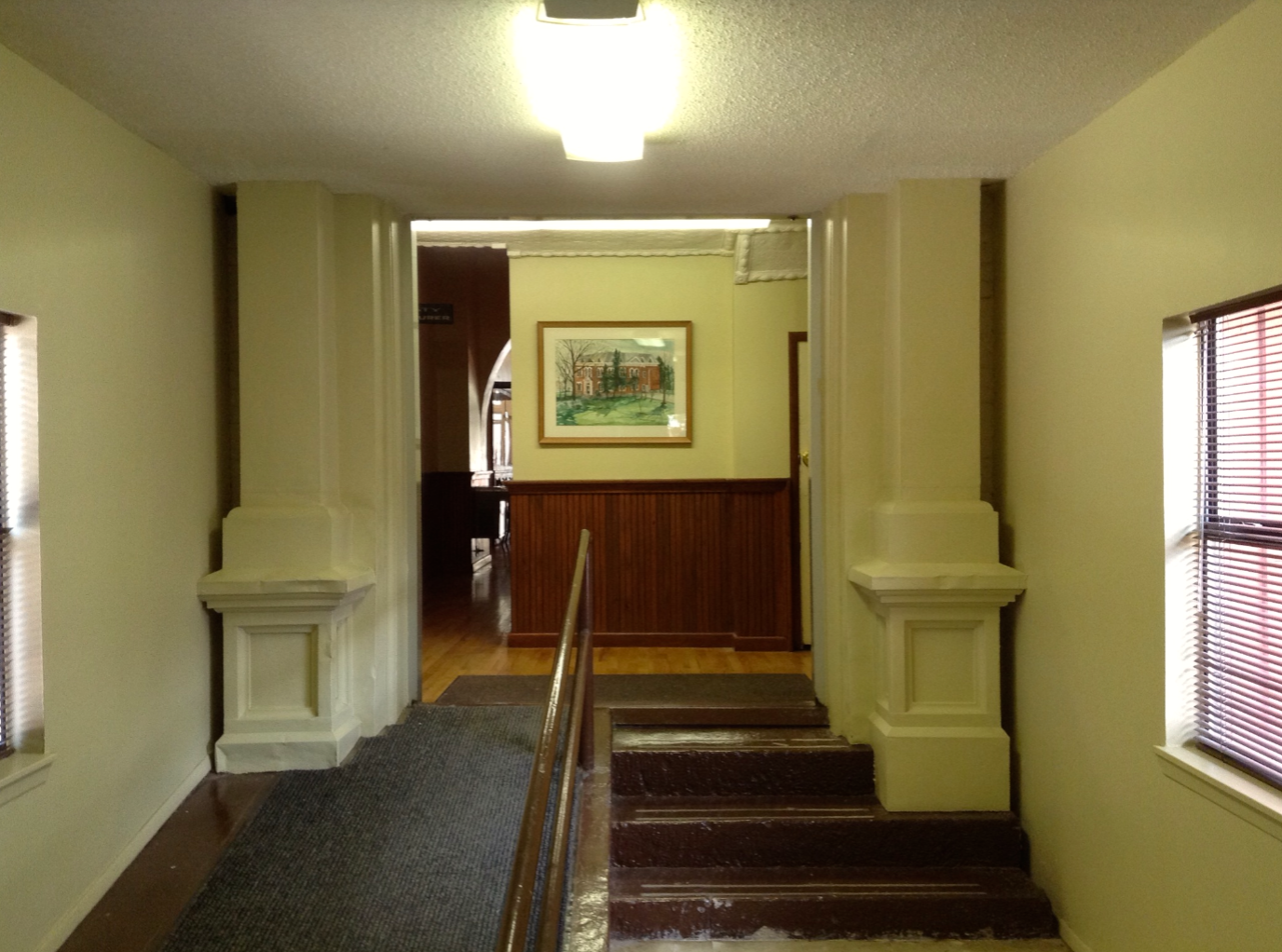 The courthouse features a large annex to the rear of the historic building. This hallway connects the two. 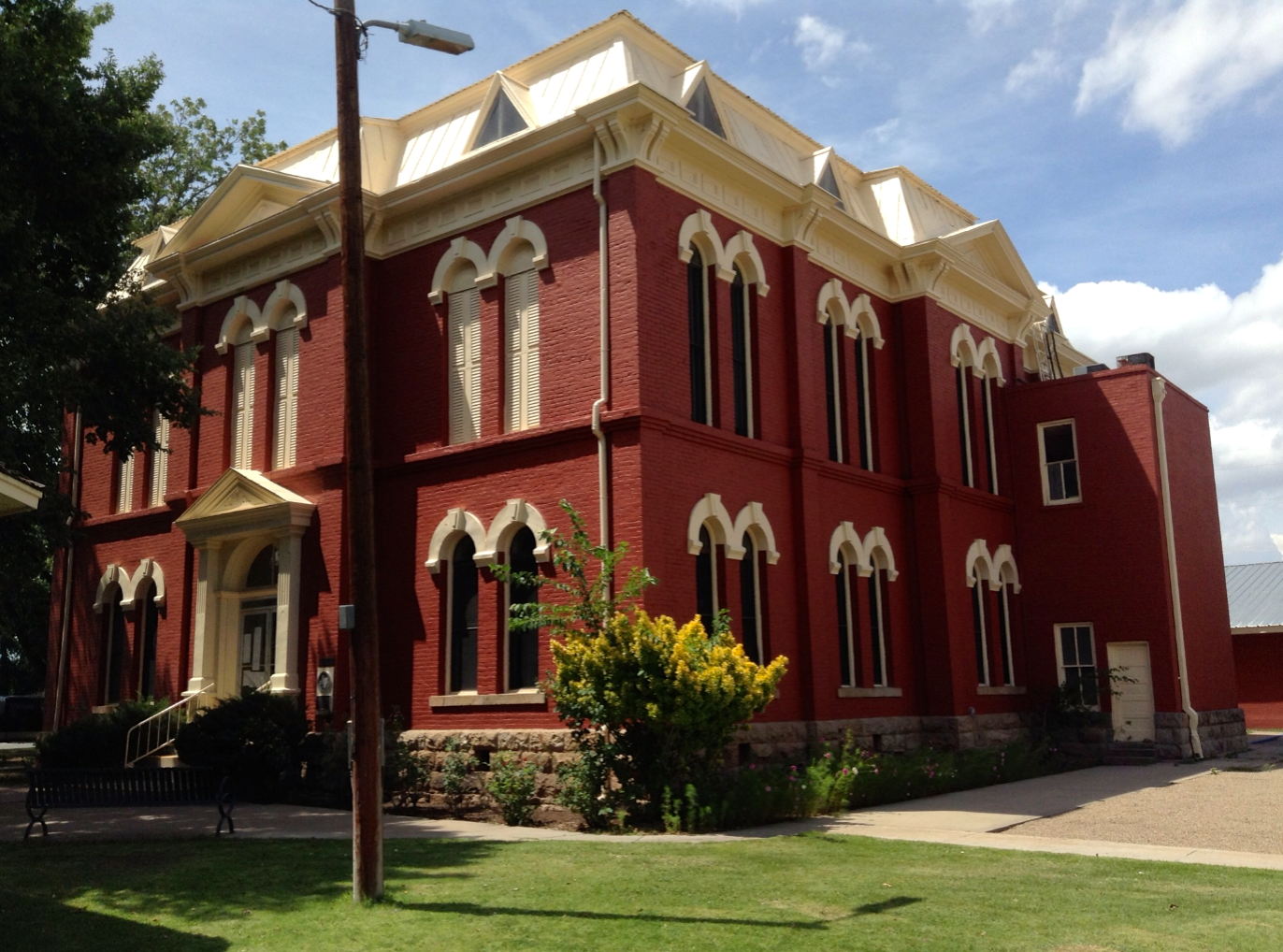 An elevator was added in 2011. The shaft can be seen to the right of the picture. 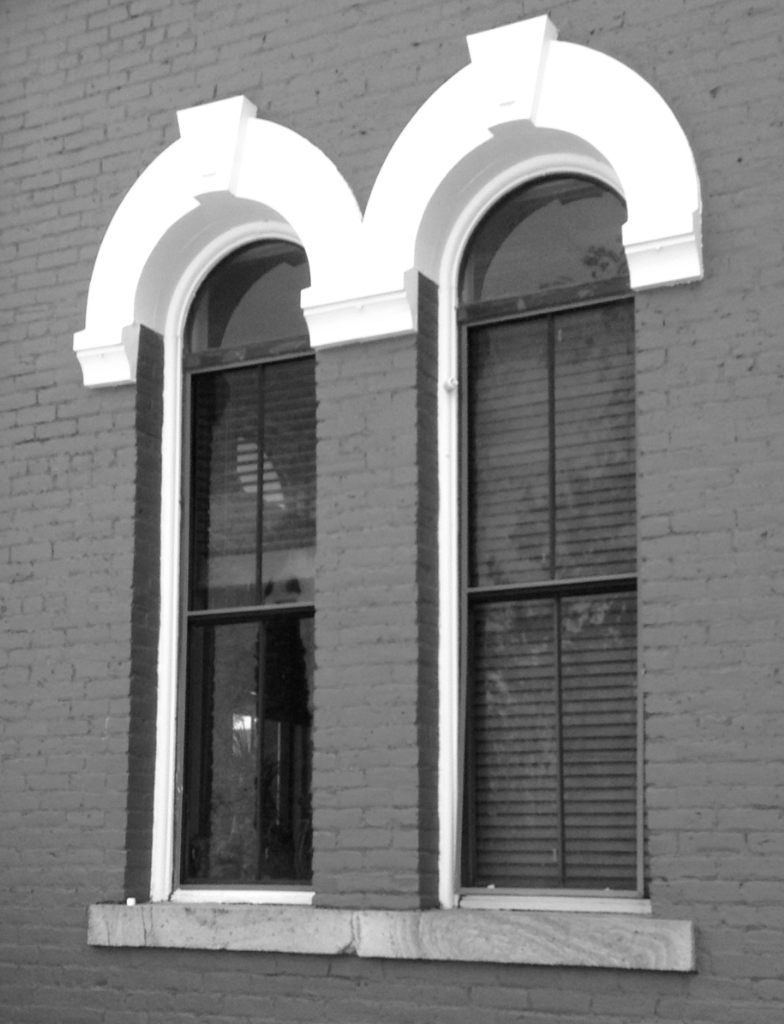 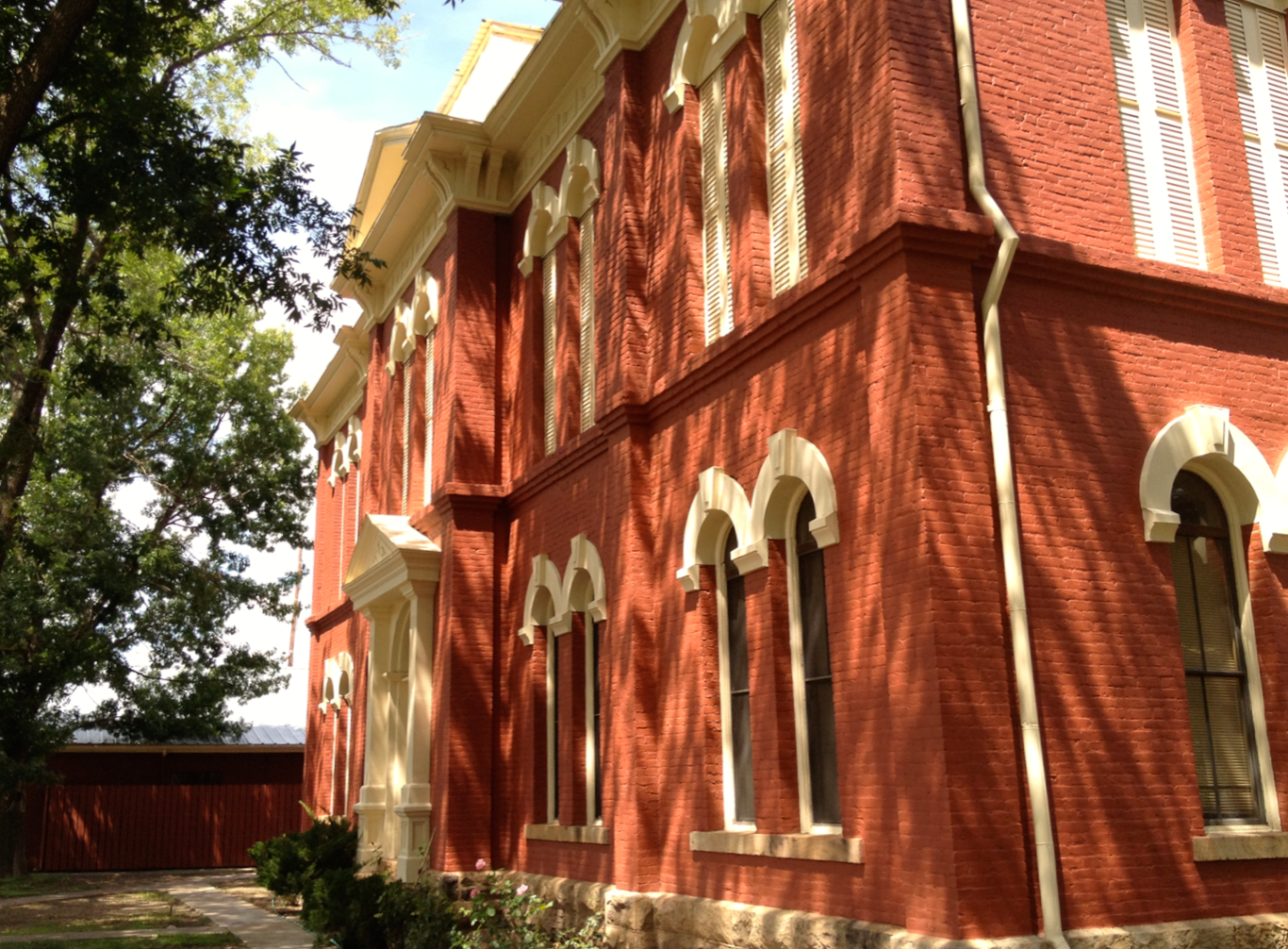 The southern façade; this entrance is now permanently closed (the room it would have opened into is now the commissioners’ courtroom)