“In 1876 Cochran County was formed by the Texas legislature from land previously assigned to Bexar and Young counties. It was a land of grass, sand hills, mesquite, jackrabbits, coyotes, bison, and pronghorn antelope. Until the 1920s, when farmers began to move into the area, the county’s economy was dominated by ranches; the huge XIT Ranch controlled much of the land.”

“In 1890 census does not show any residents in the county, and in 1900 only twenty-five people lived there. In 1901 George Washington Littlefield bought 238,858 acres, including some of Cochran county, for his great ranch; other parts of the county were ranched by C. C. Slaughter. The first headquarters of Slaughter’s ranch was established in 1898 near the site of present-day Lehman, but was moved a year later to a site two miles southwest of Morton.” 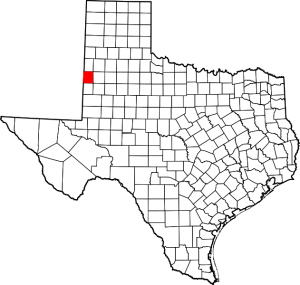 “Nevertheless, as late as 1920 only fourteen ranches and farms had been established in the county, and only sixty-seven people lived there. During these first years of its existence, the judicial administration of the area was assigned to Hockley and Lubbock counties. A post office was located in the county at Mexline, now a ghost town, from 1903 to 1905. Another post office was established at Edwards in 1905, and named for the county’s first storekeeper, Edward P. Kirkland, the postmaster. This post office closed in 1913. Until the 1920s, county residents got their mail from the Yoakum County post office of Bronco.”

“Cochran County began to grow rapidly after 1921, when Slaughter’s heirs dissolved the Slaughter Cattle Company and began to sell its ranchlands to farmers. The area’s limited rainfall had helped to deter settlement of the county for many years, but the new farmers tapped into underground water supplies a shallow depths.”

“In 1924, after the influx of new farmers had begun, the county was formally organized, and a spirited political struggle ensued between Morton J. Smith, a rancher, and the Slaughter heirs. The Slaughter family, having failed on two earlier attempts to secure rail connections to their ranch, had founded Ligon four miles south of the site of Morton, in hopes that Ligon would become the county seat. Smith, meanwhile, was pushing to have the new town of Morton made county seat. In the 1924 election, Morton received seventy-nine votes to Ligon’s twenty and thus became the county seat.”

“During the 1930s many residents were hurt by the Great Depression and the Dust Bowl. The county had some of the worst sandstorms ever seen; new sand dunes as high as twenty-eight feet were reported. Nevertheless, the number of farms in the area increased to 431 by 1940, and cropland harvested in the county increased from 28,045 acres in 1929 to more than 90,500 acres in 1940.”

“The discovery of oil in 1936 also helped to provide jobs and to stabilize the economy during this period. The first producing well in the county was drilled in 1936 at the Duggan ranch, south of Whiteface, and in 1938 Cochran County produced 95,458 barrels. Reflecting this growth during the 1930s, the county’s population also increased significantly during this period, rising to 3,735 by 1940.”

“The decline is largely traceable to the trend toward larger farms and does not necessarily indicate poor economic prospects for the future. Most Cochran County farm families live in Morton and commute to their jobs. Prosperity since the 1960s owes much to the tapping of underground water for irrigation, mostly for cotton raising. By 1986 the county included about 300,000 acres of cropland, 110,000 of which was irrigated. Cattle range comprises almost 191,500 acres of county land, and the county has a feed lot and a horse-meat packery. By the mid-1980s the Santa Fe Railroad had abandoned its tracks in the county.”

The 1926 courthouse is the only one Cochran County ever had. Originally built of brick and steel, the W.R. Kaufman-designed structure was of Classical Revival design. However in 1968, it was remodeled beyond recognition to fill a modern shell. 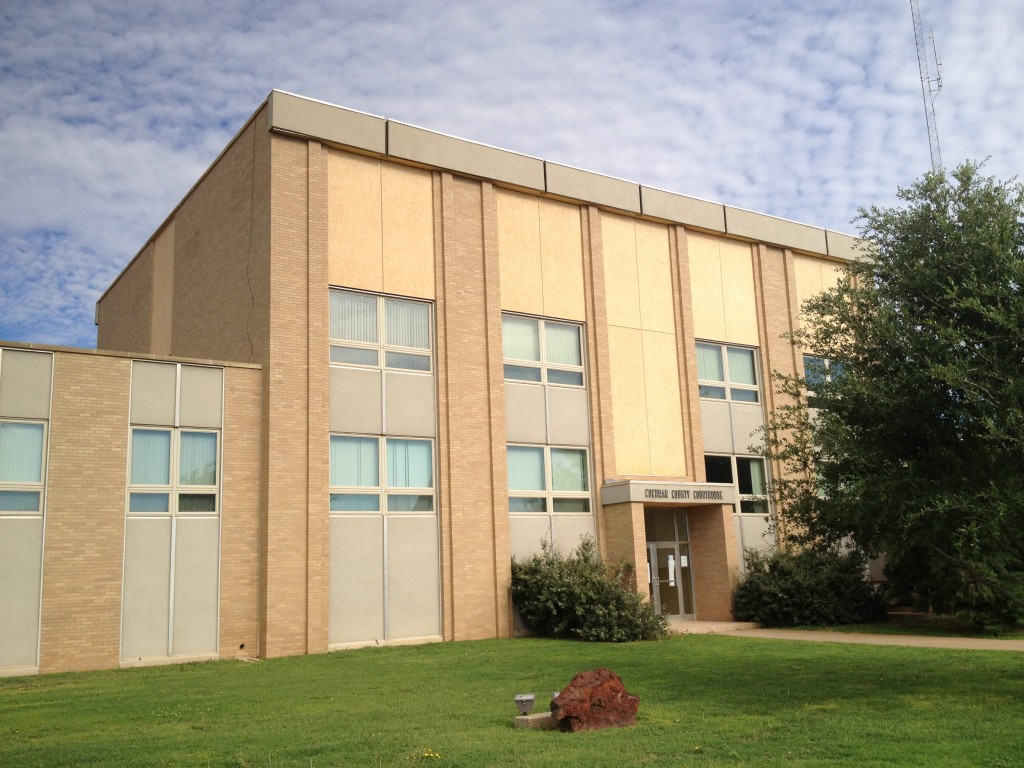 The county should be ashamed of the 1968 remodel. 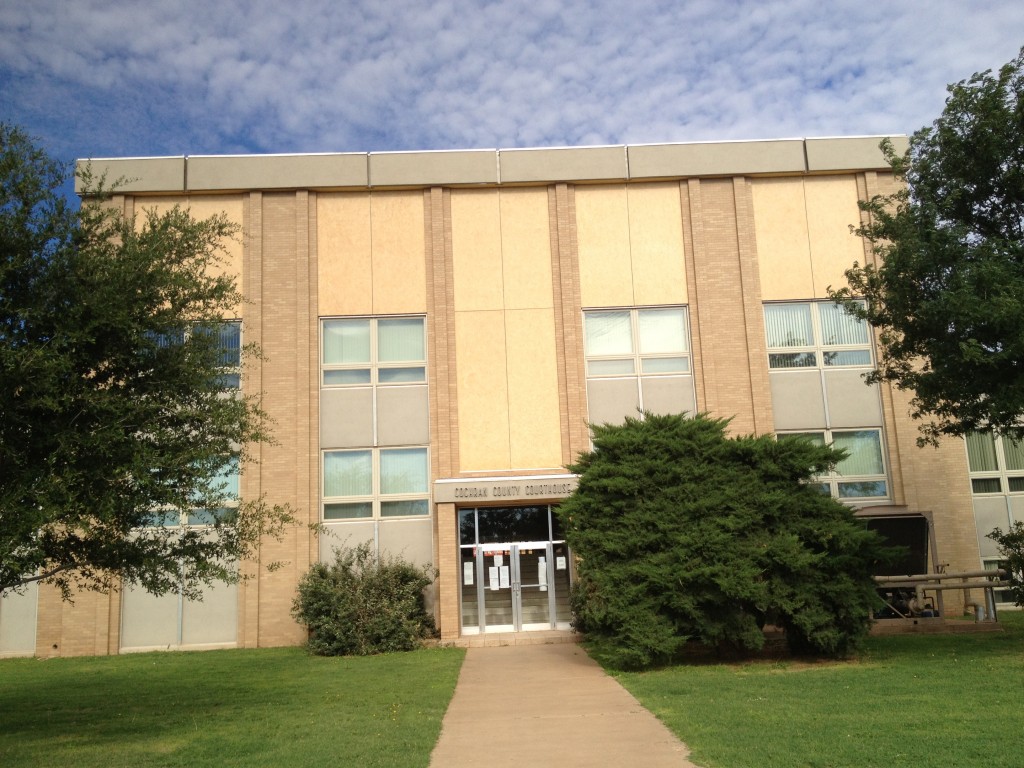 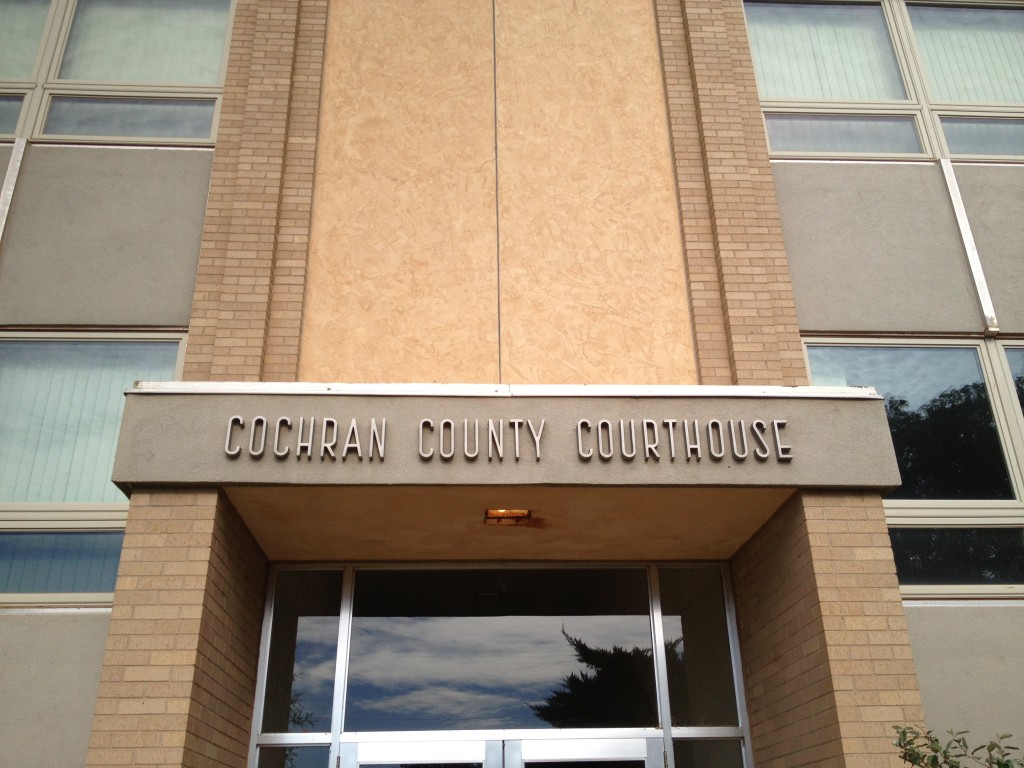 The lawn around the building features an assortment of monuments/memorials. 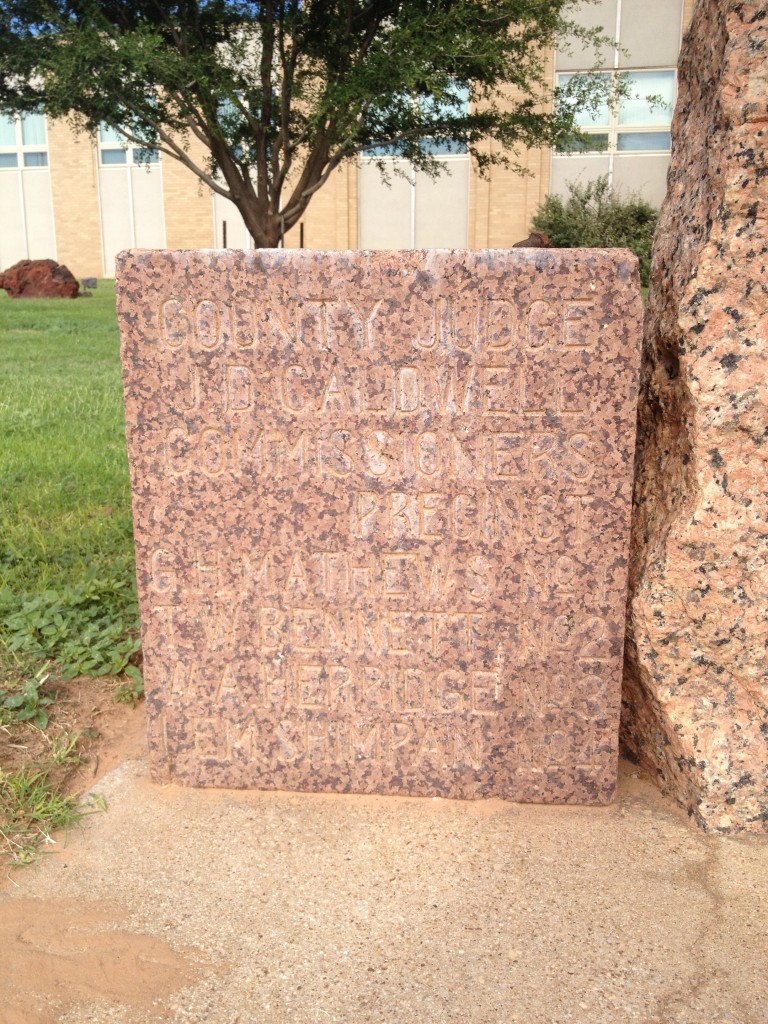 I’m unaware of what this is, but I’d like to think it’s the cornerstone from the original 1926 building. 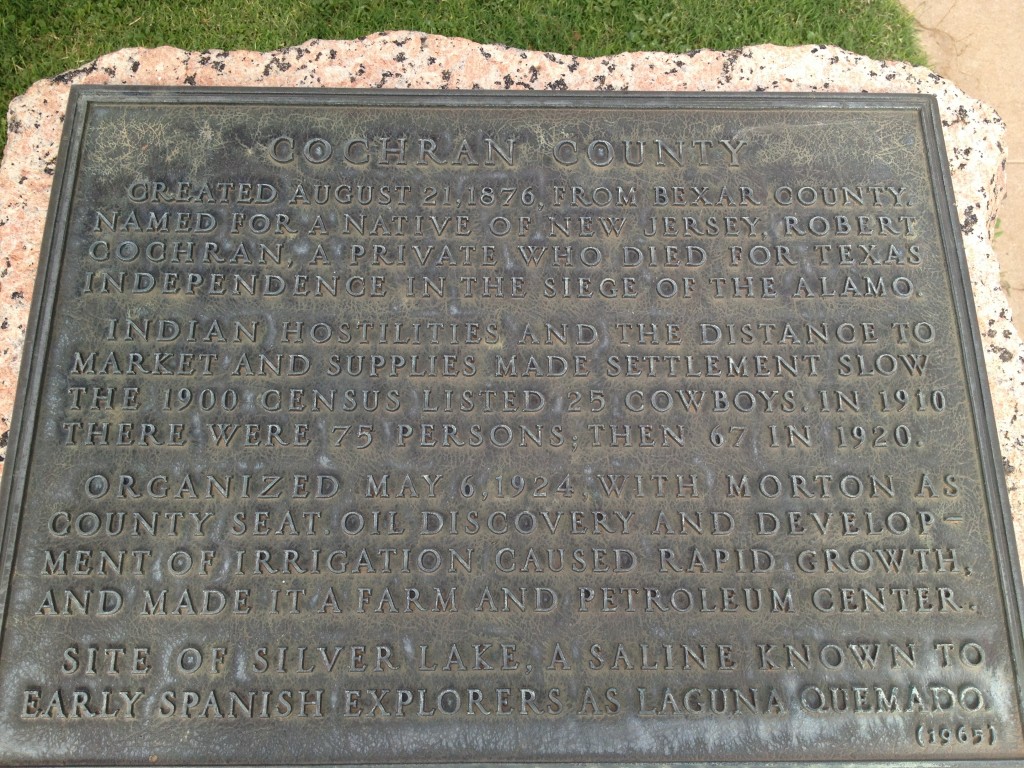 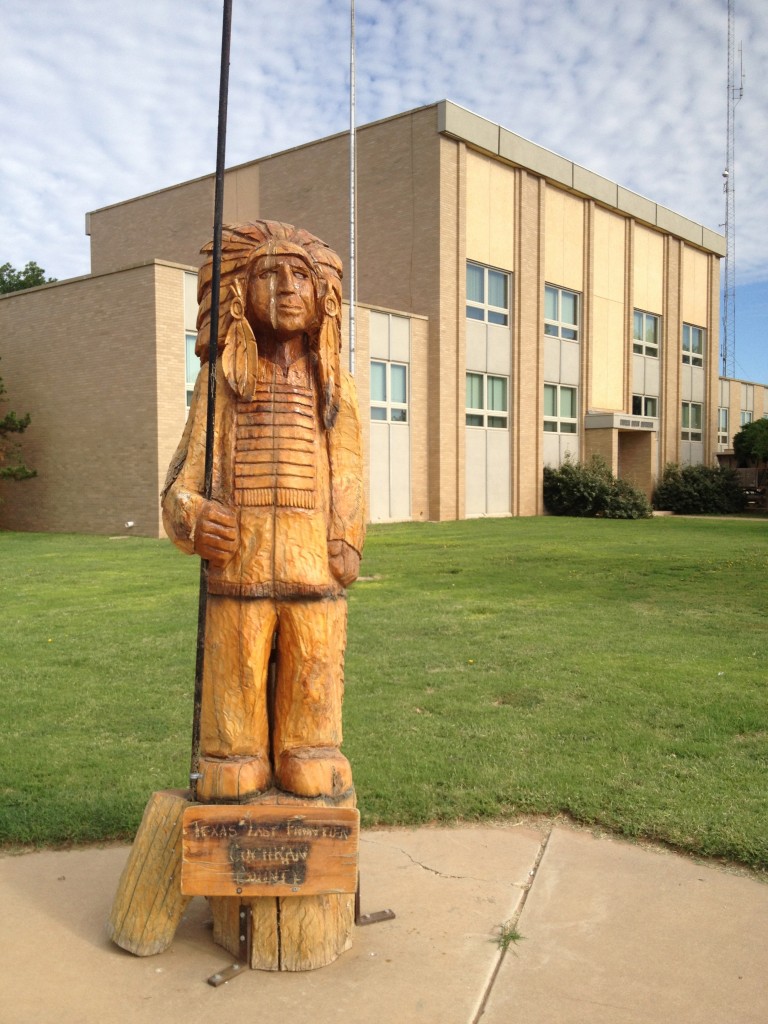 The most interesting feature is the courthouse’s statue of an Indian chief.