“Culberson County comprises 3,815 square miles of terrain that varies from mountainous to nearly level, with elevations ranging from 8,751 feet on Guadalupe Peak, the highest spot in the state, to 3,000 feet. The county is in the Rio Grande basin.”

“The growing season averages 224 days a year, and the average annual precipitation is ten inches. Less than 1 percent of the land in Culberson County is considered prime farmland.” 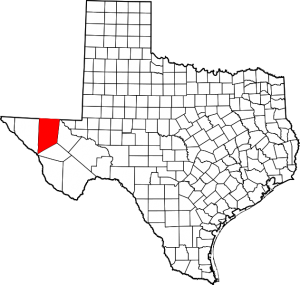 ”Also in 1849, the Van Horn Wells were supposedly discovered by Maj. Jefferson  Van Horne, en route to El Paso. The wells became known as one of the few  dependable water sources in the vast emptiness of West Texas; ten years later  the army considered them sufficiently important to establish a cavalry outpost  there under Lt. James Judson Van Horn (no relation to Jefferson). Lieutenant  Van Horn commanded the station until 1861, when he was taken prisoner by  Confederate troops who seized the wells. The town of Van Horn, founded some t  twenty years later, was named for him.”

”Extraction of minerals has long been important in Culberson County, although  rumors of fabulously wealthy gold mines in the Guadalupes seem to be mere  wishful thinking. Around 1875 an old prospector named Ben Sublett strode into a  saloon and casually tossed a buckskin pouch full of gold nuggets onto the bar,  hinting broadly that he had discovered them in the Guadalupes. All efforts to get  him to reveal the exact location of his find were unsuccessful; he took his secret  to the grave in 1892, leaving his son to search in vain for the mine.”

“The story of the local cotton industry follows the pattern of farming in general in the county. Culberson County had been the only county in Texas never to produce a bale of cotton, but in 1949 Darwin Brewster grew the first on a 500-acre farm near Lobo. The bale was ginned at Tornillo, in El Paso County, and proudly displayed at the main intersection in downtown Van Horn; Brewster himself was honored by the chamber of commerce.”

Culberson County is home to most of Guadalupe Mountains National Park (the rest being in neighboring Hudspeth County). This portion of the park includes Guadalupe Peak. 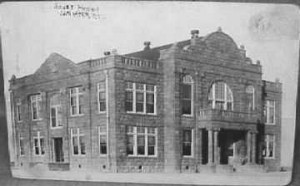 Culberson County’s first courthouse was constructed in 1912 (the same year the county was organized) and designed by E.E. Churchill. According to THC , [It featured] sandstone pilasters, columns, and a balustrade of classical detail, with [a] curved Mission Style parapet. [It also had an] interior pressed metal ceiling. The building was razed in 1967, making way for the very unassuming structure that stands today. 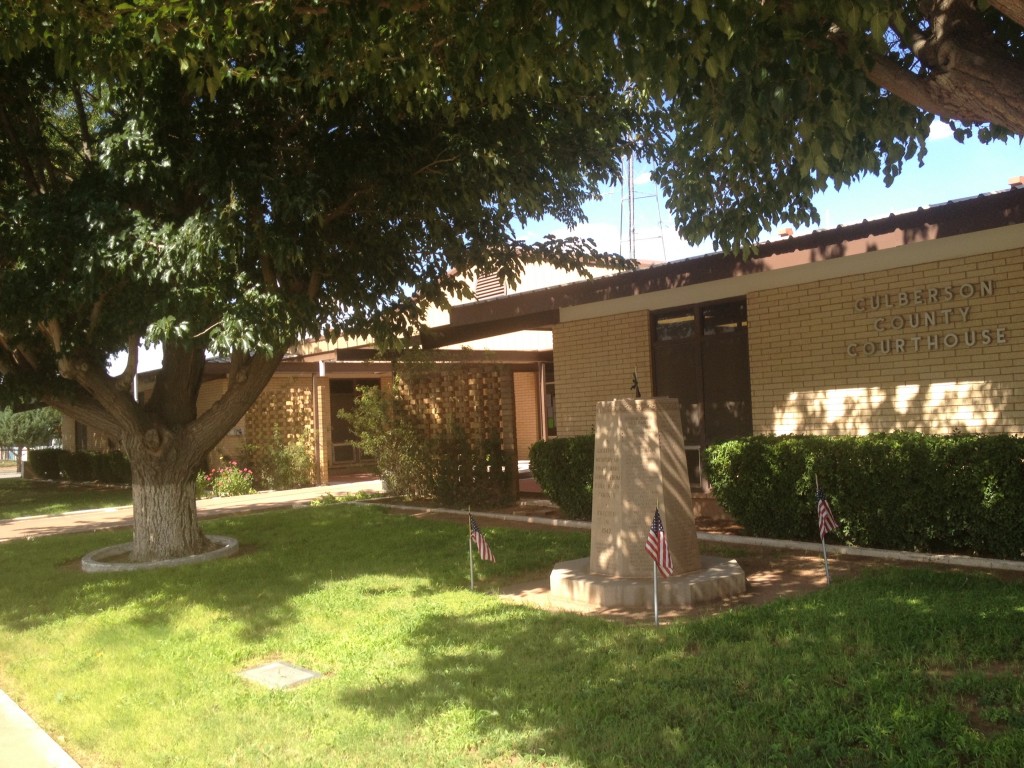 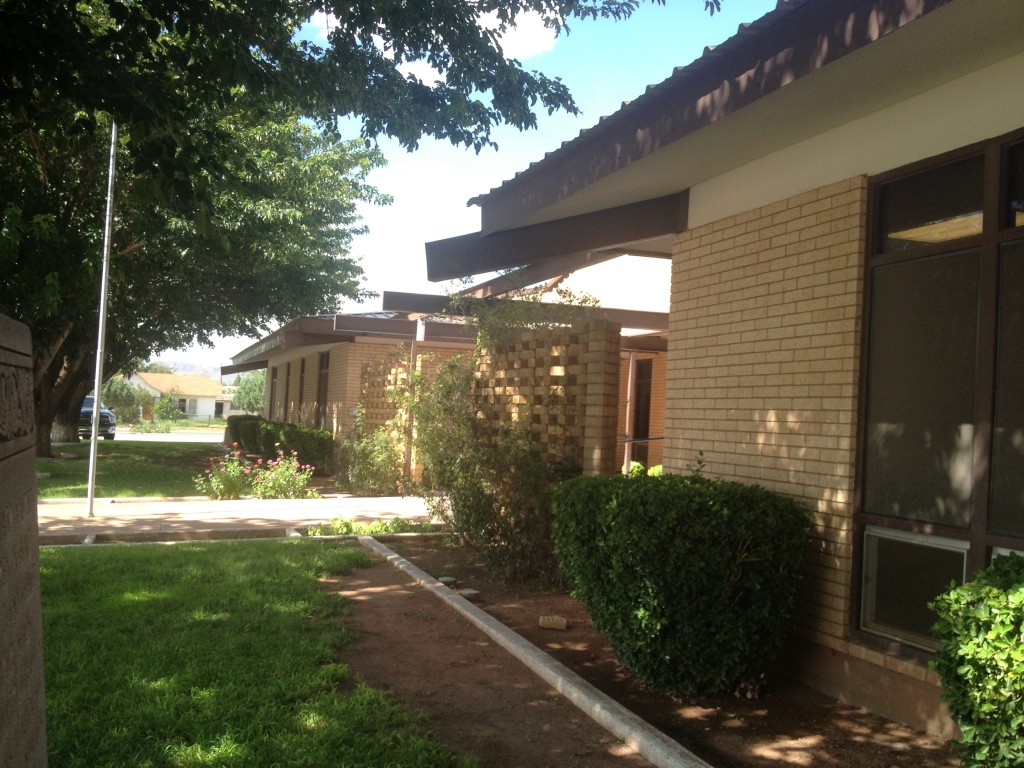 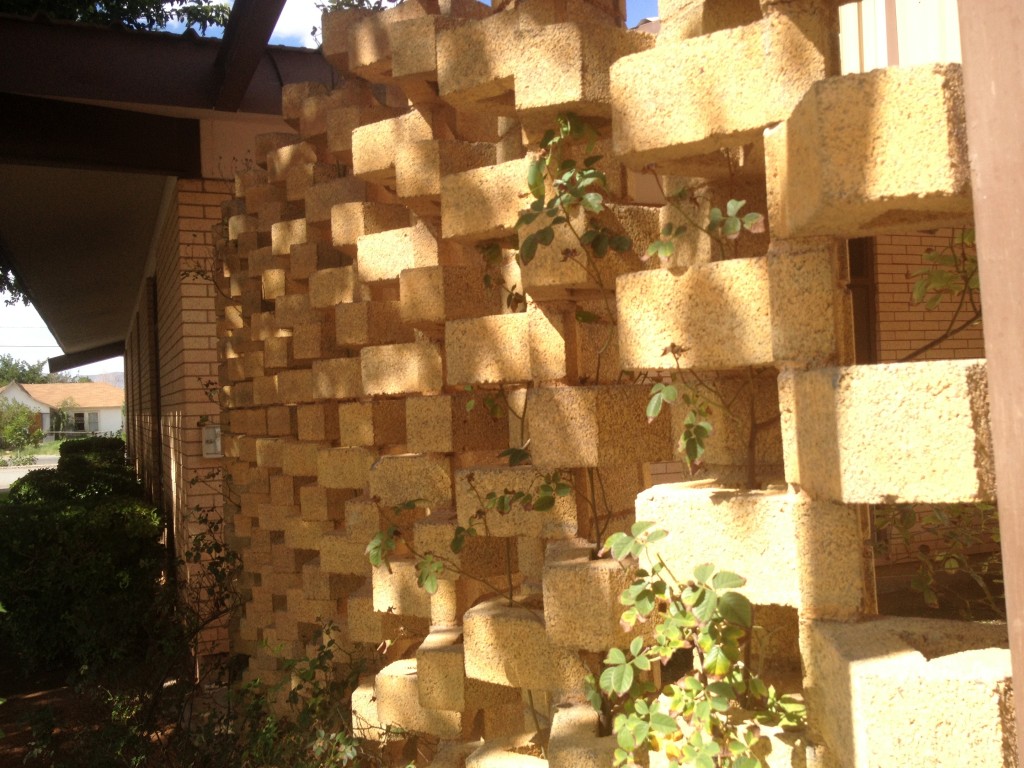 Two unique cinder block walls guard the patio in front of the entrance. 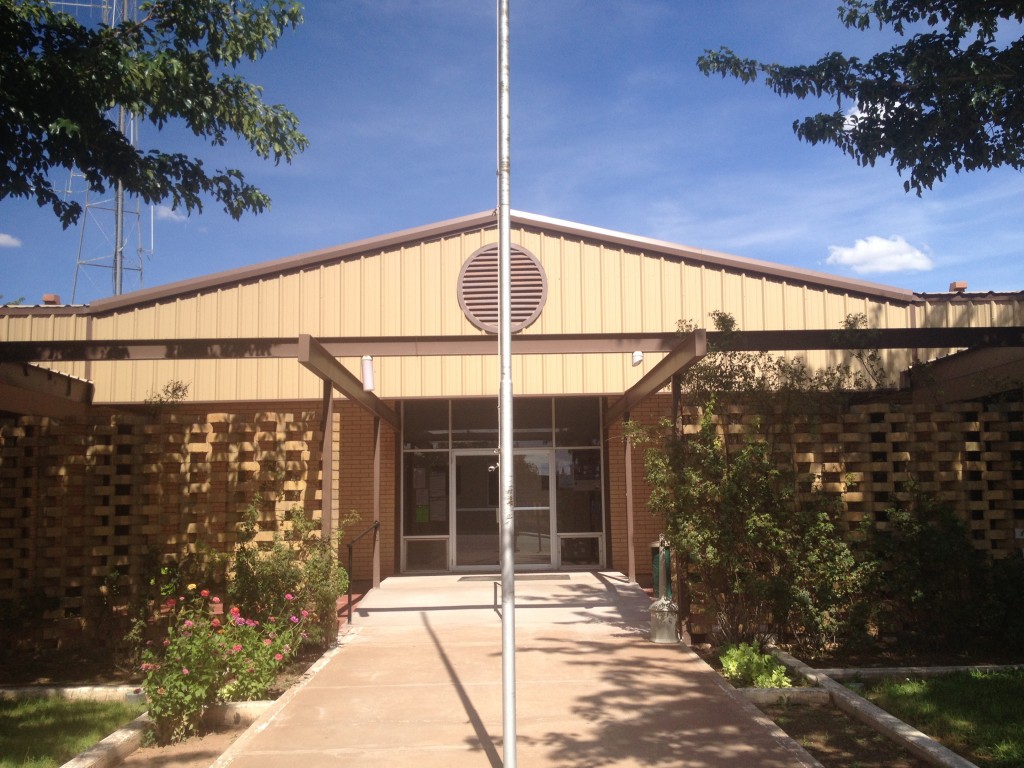 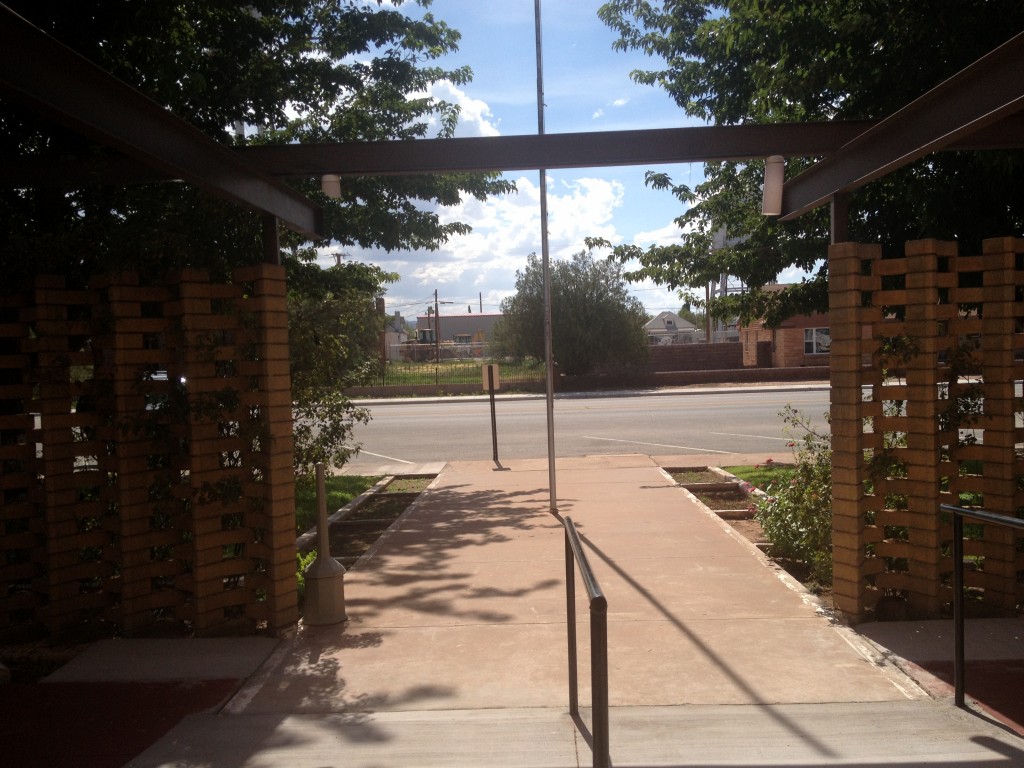 Looking north from the patio towards La Caverna street. 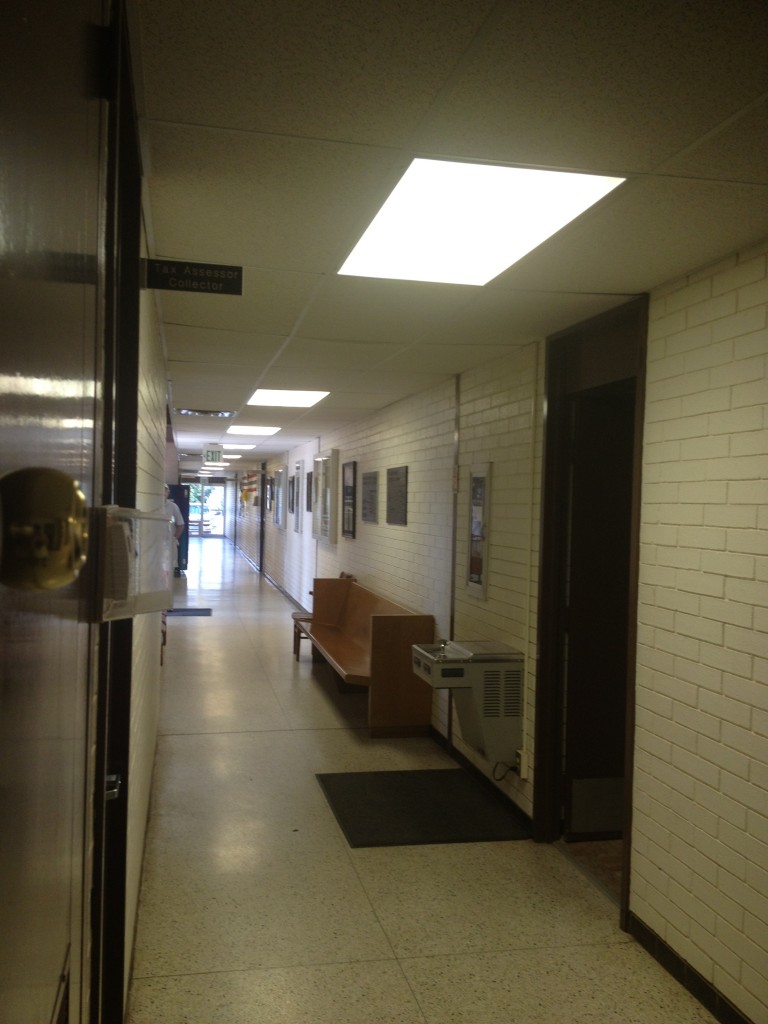 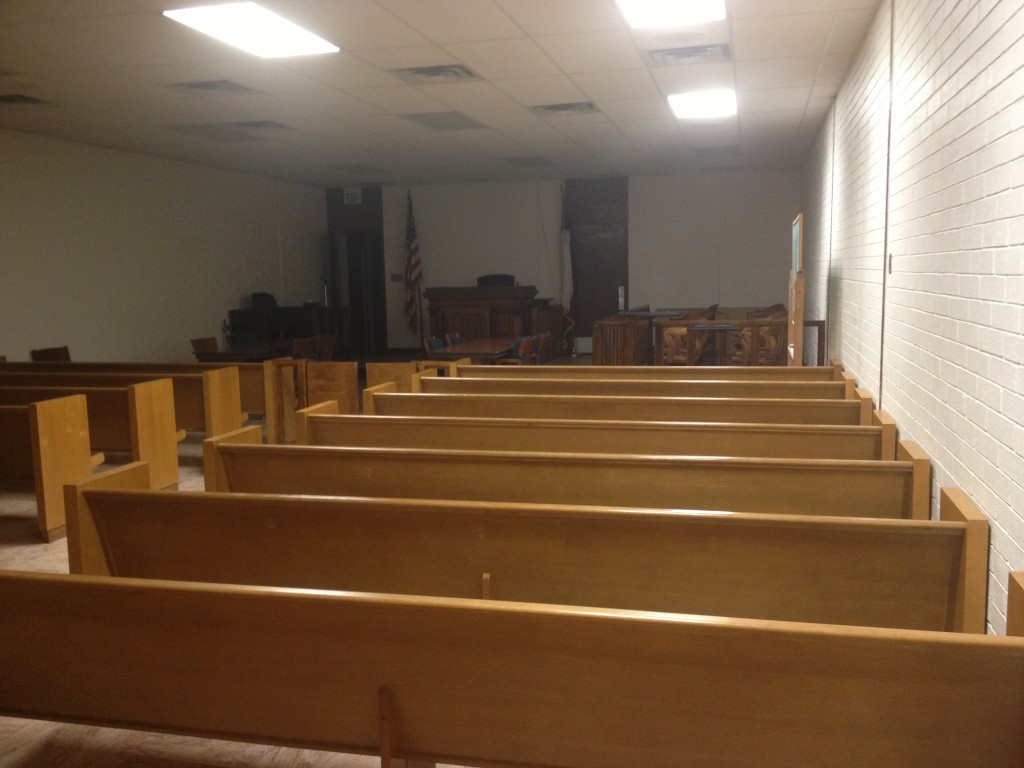 The very small, very narrow courtroom on the first (and only) floor 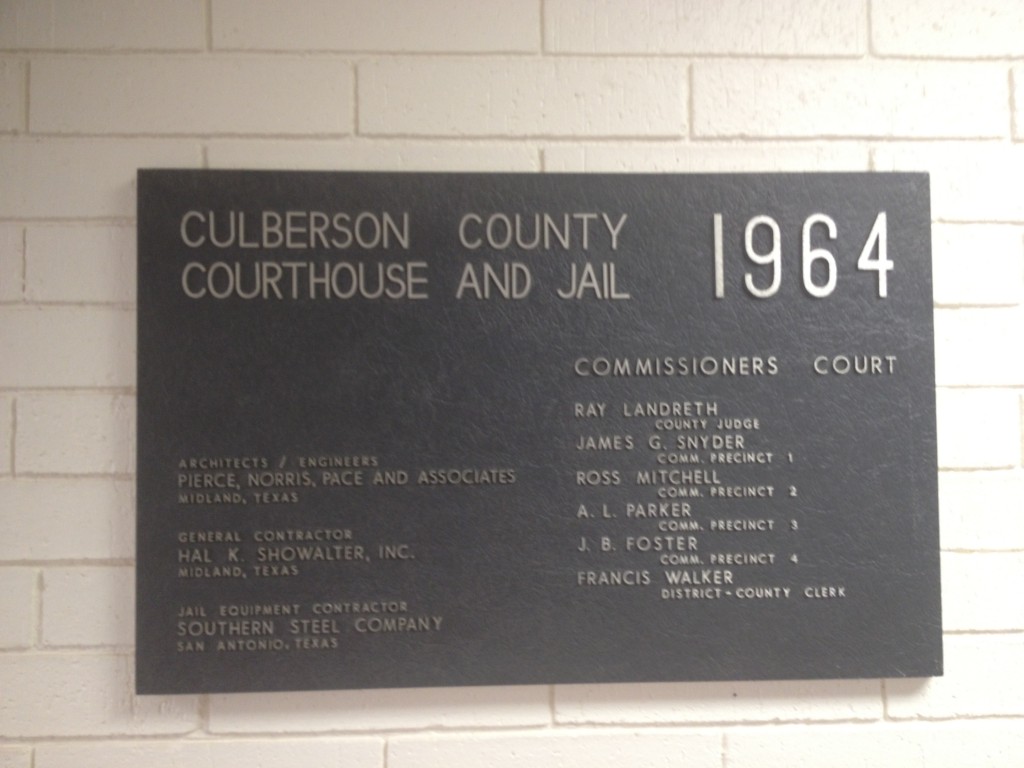 Popularly assumed to be the ruins of the 1912 courthouse, this is actually what remains of The Duke’s Castle, a 1910 building purchased by Duke D’Autri who remodeled it to resemble his family’s home in Europe. 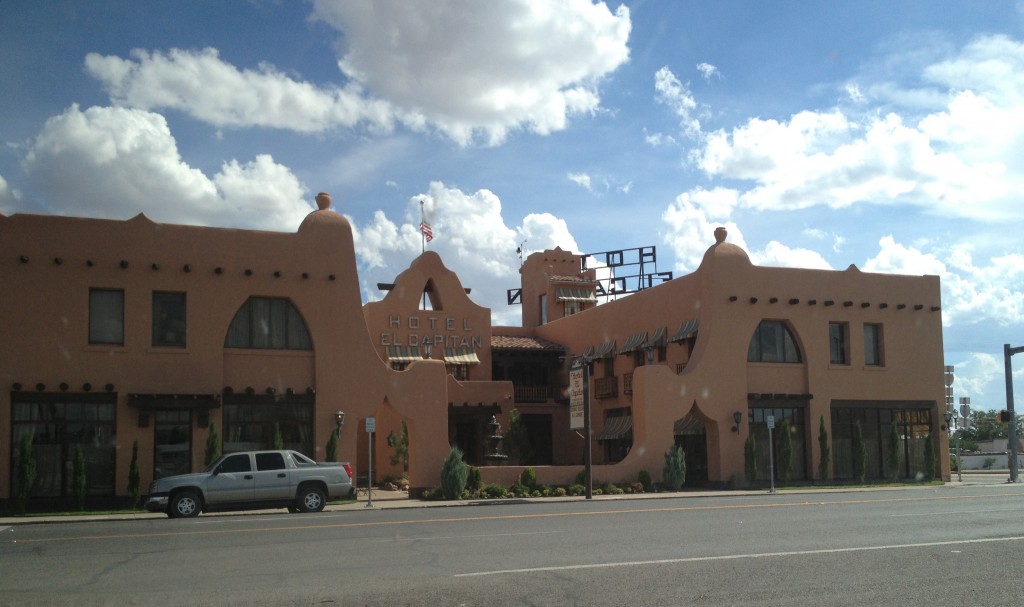 Historic Hotel El Capitan; the architects of the building are the same that designed the Reeves County Courthouse in Pecos 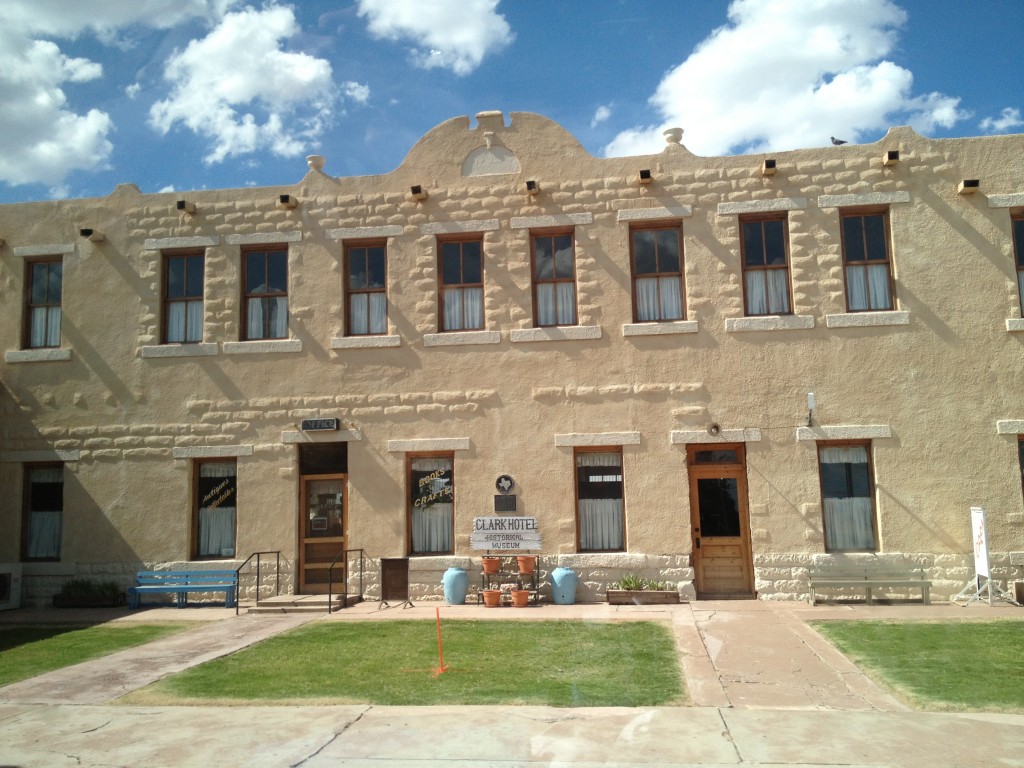 Van Horn is home to two historic hotels. The other is the Clark Hotel which served as the courthouse from 1911-1912.

The Culberson County landscape surrounding the city. Notice the V for Van Horn.