“Donley County, in the eastern Panhandle just east of the Llano Estacado, is bordered on the north by Gray County, on the west by Armstrong County, on the east by Collingsworth County, and on the south by Briscoe and Hall counties. It was named for Stockton P. Donley, a pioneer lawyer.”

“The county occupies 929 square miles of rolling prairie and broken rangeland. Its sandy clay, deep loam, and sandy loam support a variety of native grasses as well as cotton, grain sorghum, wheat, and corn. Oak, cottonwood, elm, mesquite, and other trees can be found near the rivers and streams in the county.” 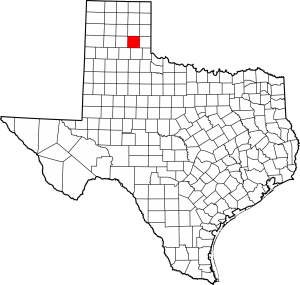 “The region remained the Indians’ domain until the Red River War of 1874–75. On September 7, 1874, during Col. Nelson A. Miles‘s campaign, Lt. Frank D. Baldwin and a scout fought their way out of a Cheyenne ambush on Whitefish Creek in the northeastern section of what is now Donley County. The subsequent defeat of the Indians and their confinement to reservations in Indian Territory left the area open to white settlement. In 1876 the area was separated from the jurisdiction of the Bexar District, briefly assigned to Wegefarth County, and finally designated Donley County.”

“The first group of settlers, Methodists from the New York area, moved into Donley County intending to set up a colony. The colonists were sponsored and led by Lewis Henry Carhart, a young Methodist minister, who purchased 343 sections of the newly formed Donley County and established his colony at the junction of Carrol Creek and the Salt Fork of the Red River. The small settlement was organized in 1878 and named Clarendon, for Carhart’s wife, Clara; it came to be called Saints’ Roost by local cowboys, who disdained its prohibition regulations.”

“Clarendon grew slowly. By the early 1880s it was one of only three towns in the Panhandle and was a small regional trade center. According to the census, seven ranches or farms had been established in Donley County by 1880, and 160 people lived there. No cattle were reported in the area that year, but the agricultural census did count 14,620 sheep and 7,592 horses. The county was politically organized in 1882, when residents formed a local government and chose Clarendon as the county seat. Ten other unorganized West Texas counties were attached to it for judicial purposes at one time.”

“The county remained largely unchanged until the arrival of the Fort Worth and Denver City Railway in 1887 as it built westward from Fort Worth to Colorado. As the railroad crossed the county, it passed five miles south of Clarendon, prompting that settlement’s residents to move the town to a new site on the tracks in October 1887. By 1888 little remained of the old Clarendon; the site was later inundated by Greenbelt Reservoir. The relocated Clarendon was a division point on the railroad until 1902. Shops and offices were built there in 1887–88, and in 1887 Clarendon College, a Methodist School, was established.”

“As early as 1890 fourteen farms existed in the county, but these were more stock farms than crop farms. By 1900, however, 188 farms and ranches were in operation in the county; “improved” land comprised 14,504 acres, with 1,716 acres devoted to corn production and much smaller areas planted in wheat and cotton. Farming became firmly established in the area between 1900 and 1910, when 601 farms and ranches could be found in the county, with almost 20,000 acres devoted to corn and almost 5,000 acres planted in cotton.”

“This trend continued for the next two decades, as the cultivation of cotton, forage crops, and fruit trees rapidly expanded in the area. By 1920 cotton was cultivated on 18,240 acres and various cereals on more than 68,000 acres; sorghum culture occupied 51,000 acres, and the county’s new orchards were cultivating more than 30,000 fruit trees, mostly peach. Poultry was also rapidly becoming an important part of the county’s economy; by 1920 local farms had 57,683 chickens and produced 262,431 dozen eggs.”

“Many local farmers suffered devastating losses during the Great Depression, and their hardships were aggravated by the extended drought of the early 1930s. Cotton production dropped significantly during these years—by 1940 it occupied only about 38,500 acres—and many farmers were forced off their land. By 1940 only 877 farms and 7,487 residents remained in Donley County.”

“In 2002 the county had 440 farms and ranches covering 584,340 acres, 83 percent of which were devoted to pasture and 15 percent to crops. In that year farmers and ranchers in the area earned $73,614,000; livestock sales accounted for $64,736,000 of the total. Cattle, cotton, peanuts, wheat, alfalfa, and hay were the chief agricultural products. The majority of the county’s population lives in its towns.”

The Donley County Courthouse is one of my favorites. 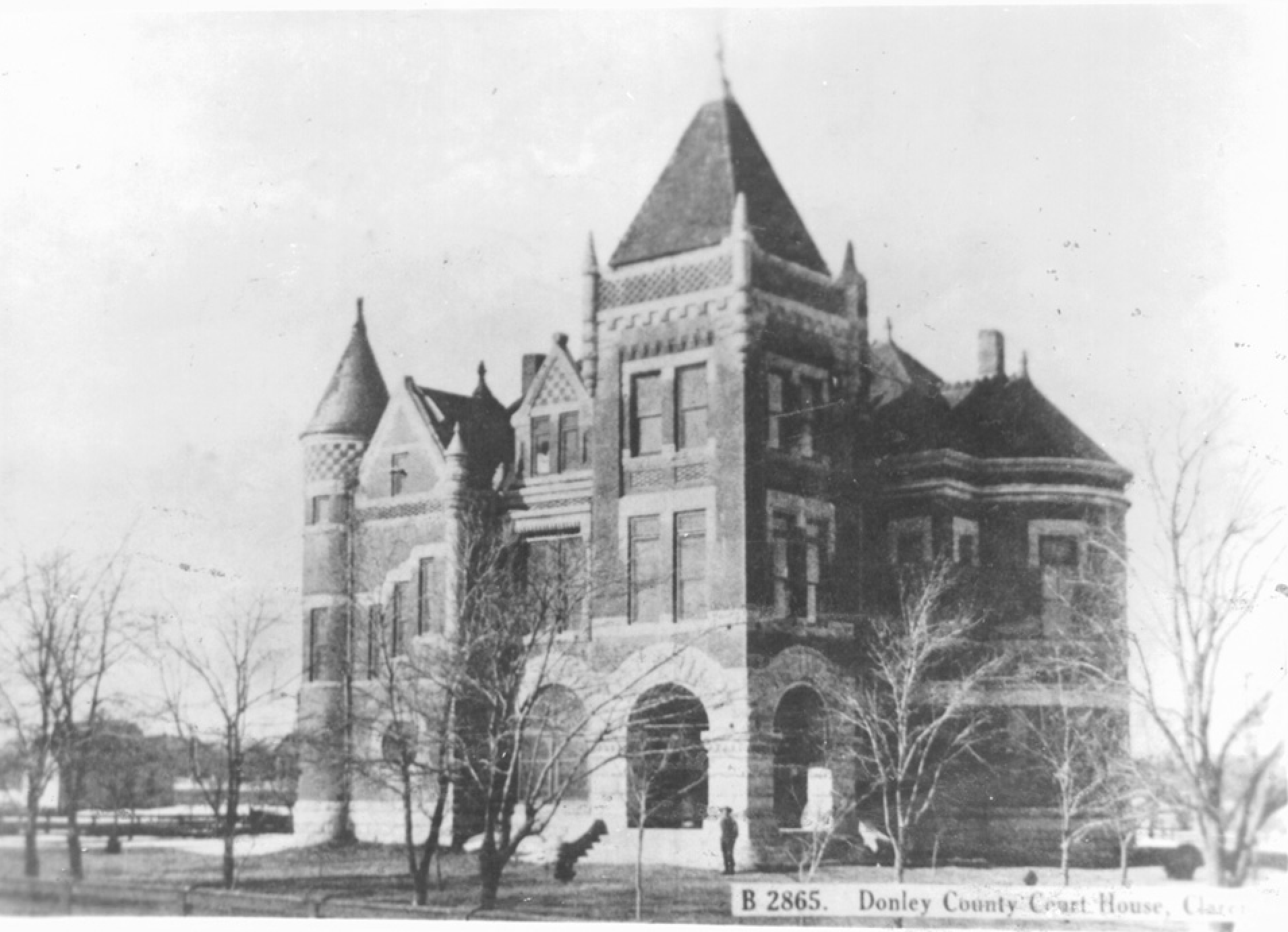 “The Donley County Courthouse, designed by C. H. Bulger and Isaac Hamilton Rapp in the Romanesque Revival style, was constructed in 1891. The courthouse plan is unusual in Texas but conforms to conventions followed by other architects who worked in the Romanesque Revival style. The main entrance is emphasized by a round arch entry bay at the northeast corner that was originally surmounted by a large, square tower. The arches of the entry bay are comprised of large voussoirs with quarry faces, wide archivolts, cut intrados, and imposts decorated with an egg and dart pattern. The abutments display alternating courses of smooth and textured stones. The main stairway, located in the turret at the southeast corner, is indicated by a stair step window arrangement. The walls of the structure are of pressed brick placed on a base of quarry-faced ashlar. According to a local historian, the stones of the base were taken from an earlier courthouse. Stone was also used for the arches, lintels, water table and pinnacle shafts. Changes in the exterior of the building, done in the 1930s, include the removal of the upper section of the tower, dormers, brick corbelling, and the conical turret roof. In addition, some of the pinnacles have been removed, and a cast iron cresting and metal finials have been taken off the roof ridges. These unsympathetic changes have significantly altered the exterior proportions. An addition of restrooms onto the rear of the building is reasonably compatible with the rest of the courthouse. The interior retains much of its historic character and configuration. The tile floors, stained glass and main stair are still in use. The second floor is comprised of the district courtroom and a few small offices. The courtroom is still a double-height space and has a pressed metal ceiling. The floor has been carpeted and the judge’s bench moved from its original location.” – National Register Narrative 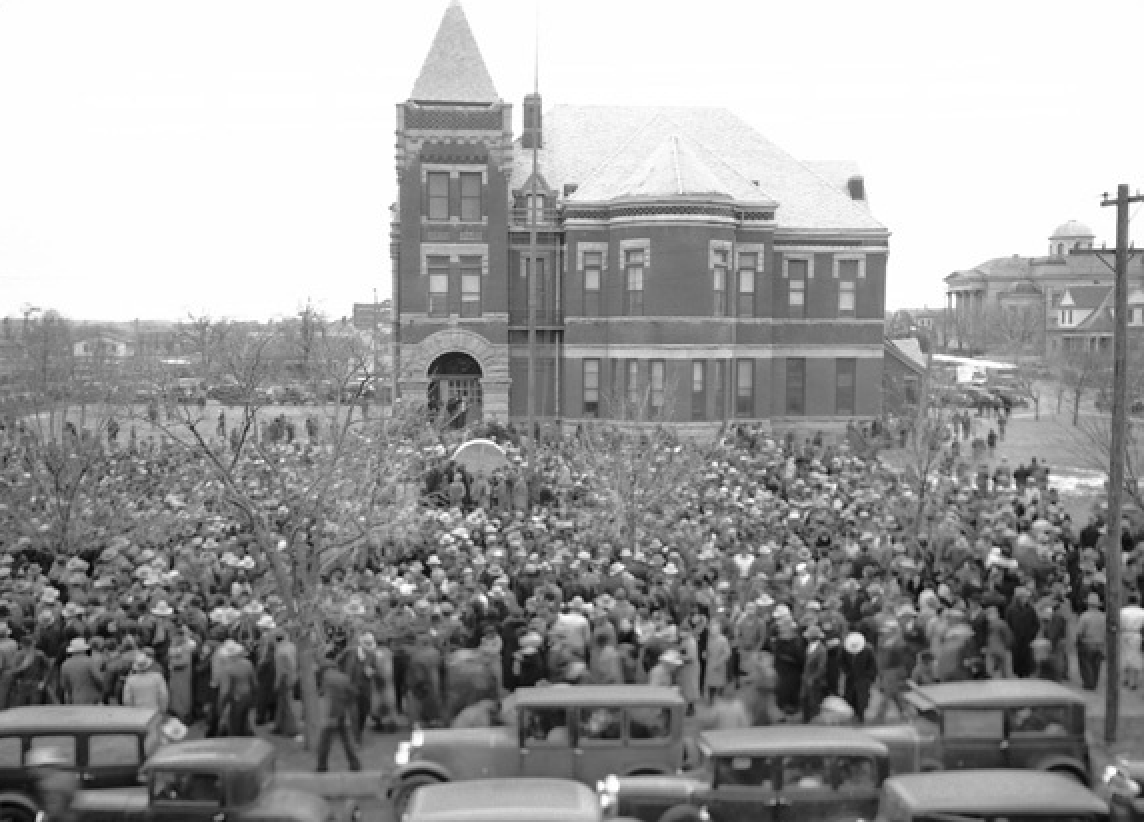 Information about the various renovations the courthouse has gone through is as follows: 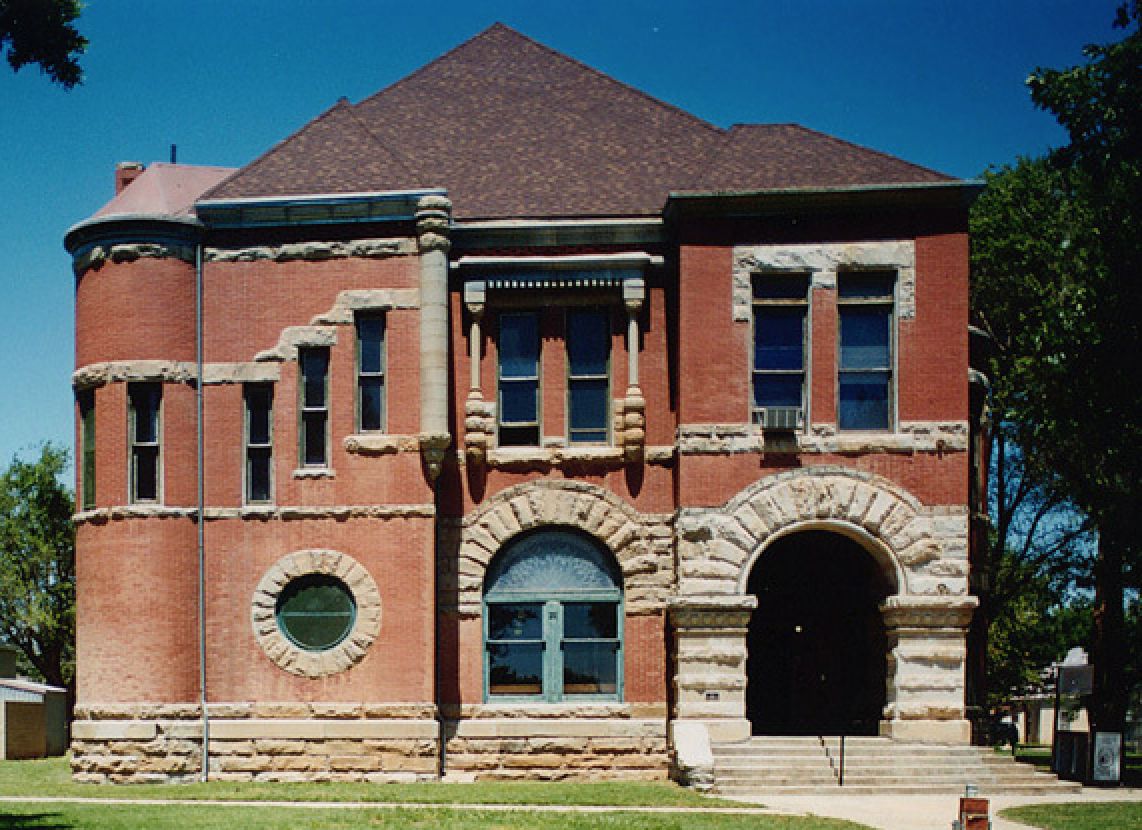 The courthouse’s tower was removed and roof altered between 1936 and 37. In the early 2000s, the firm Volz-O’Connell-Huston designed the building back to its original look. The THC Renovation of this structure was completed in 2003. 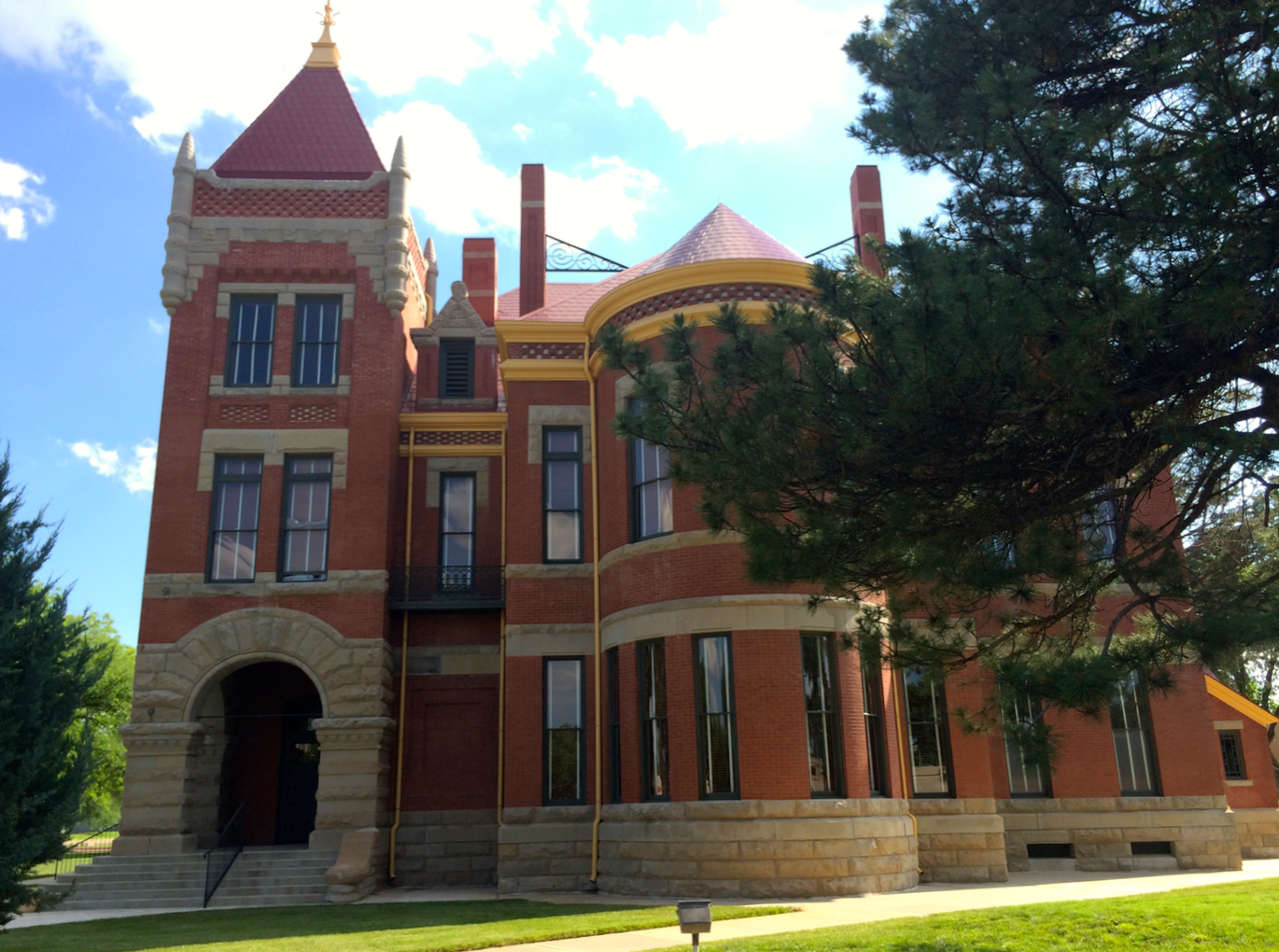 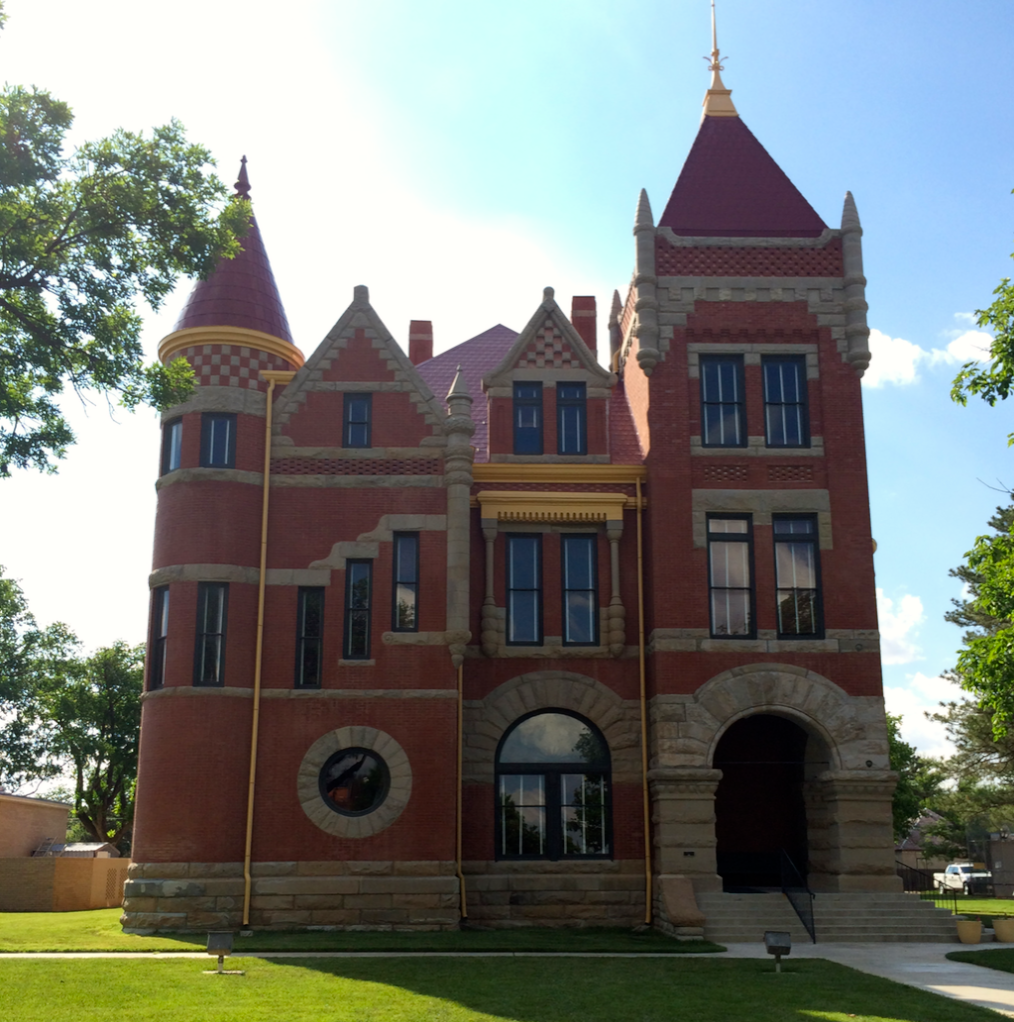 The eastern façade (compare this photo to the one above of the courthouse without its tower, gables, and turret) 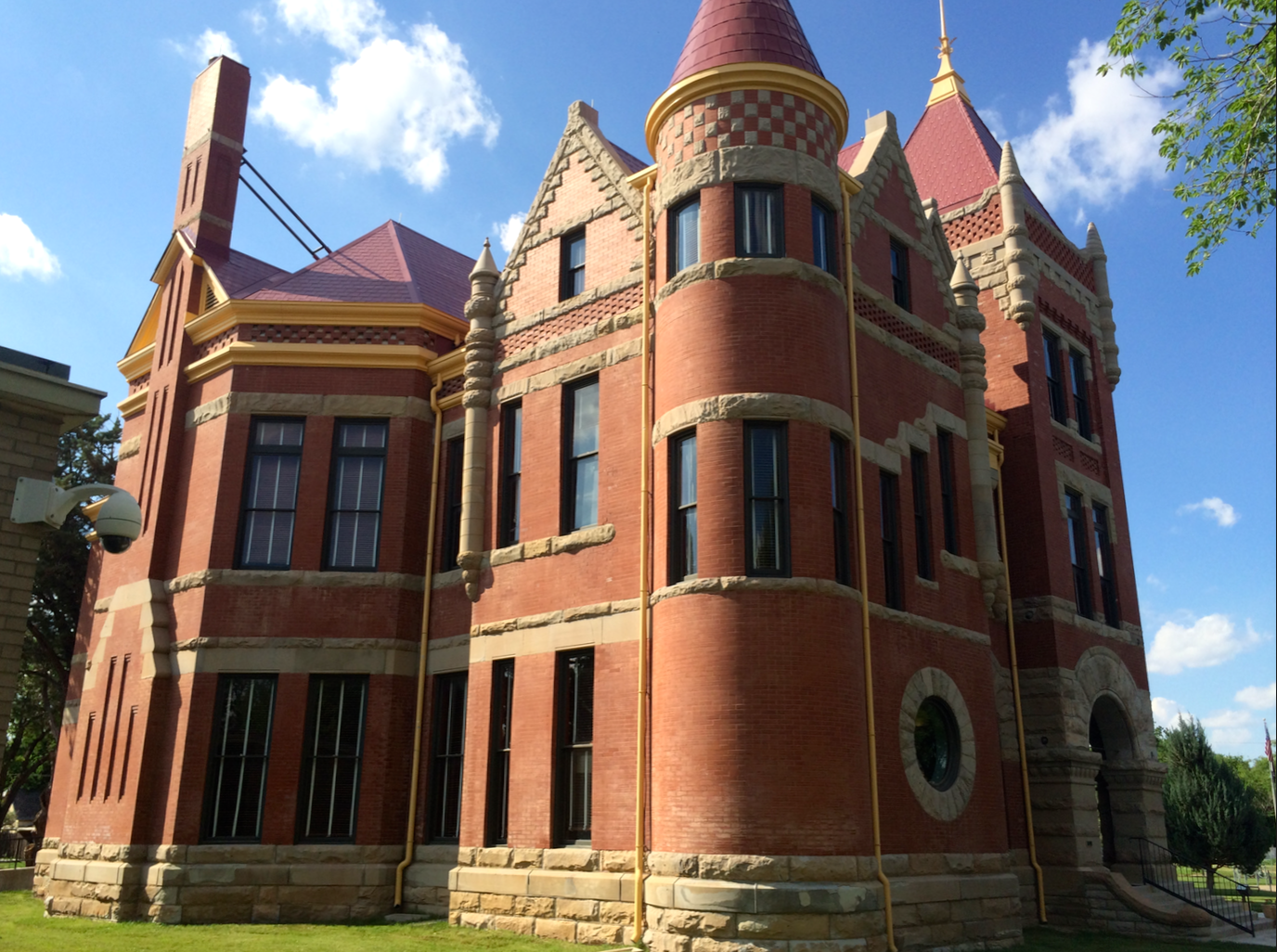 The rear side of the building 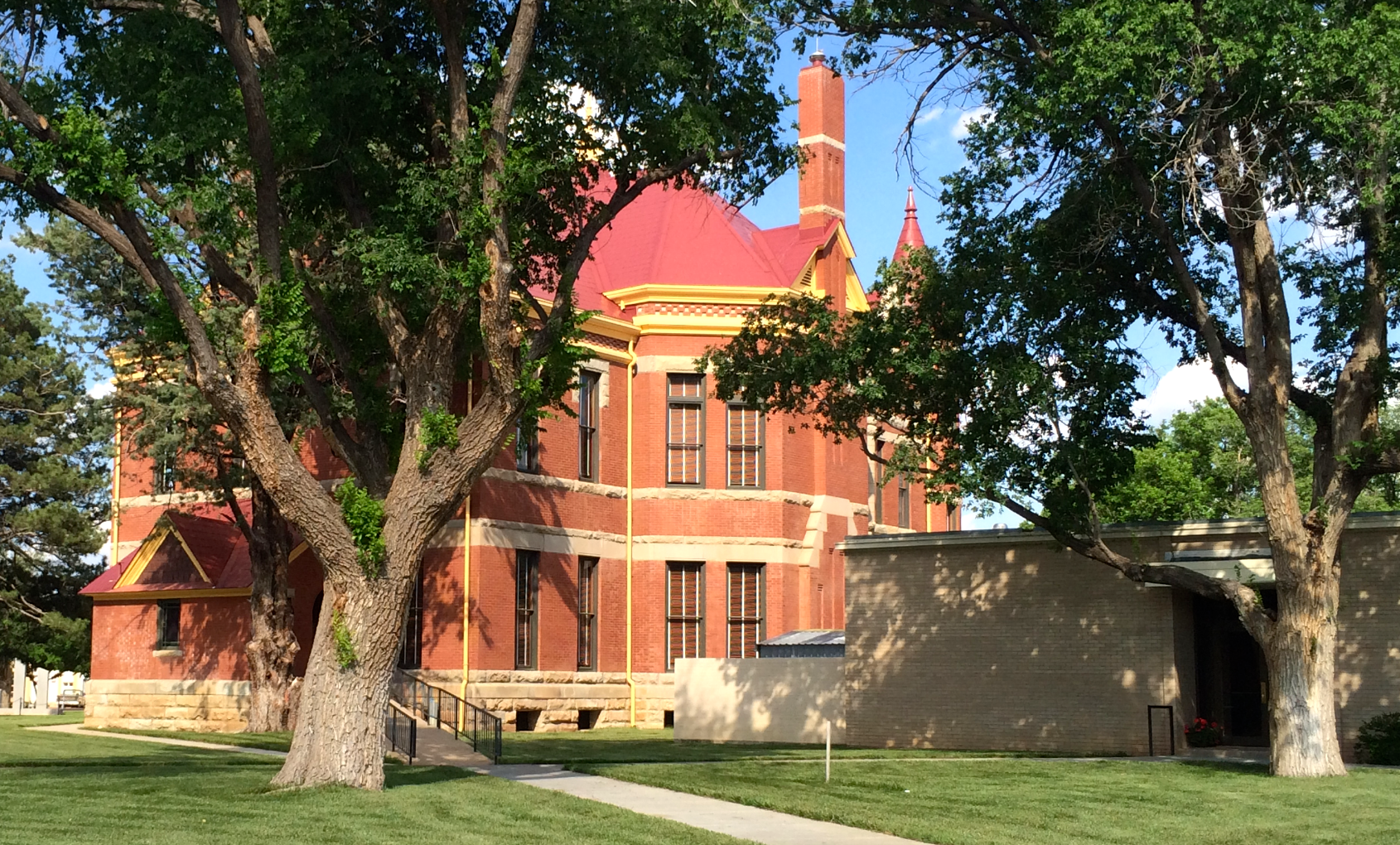 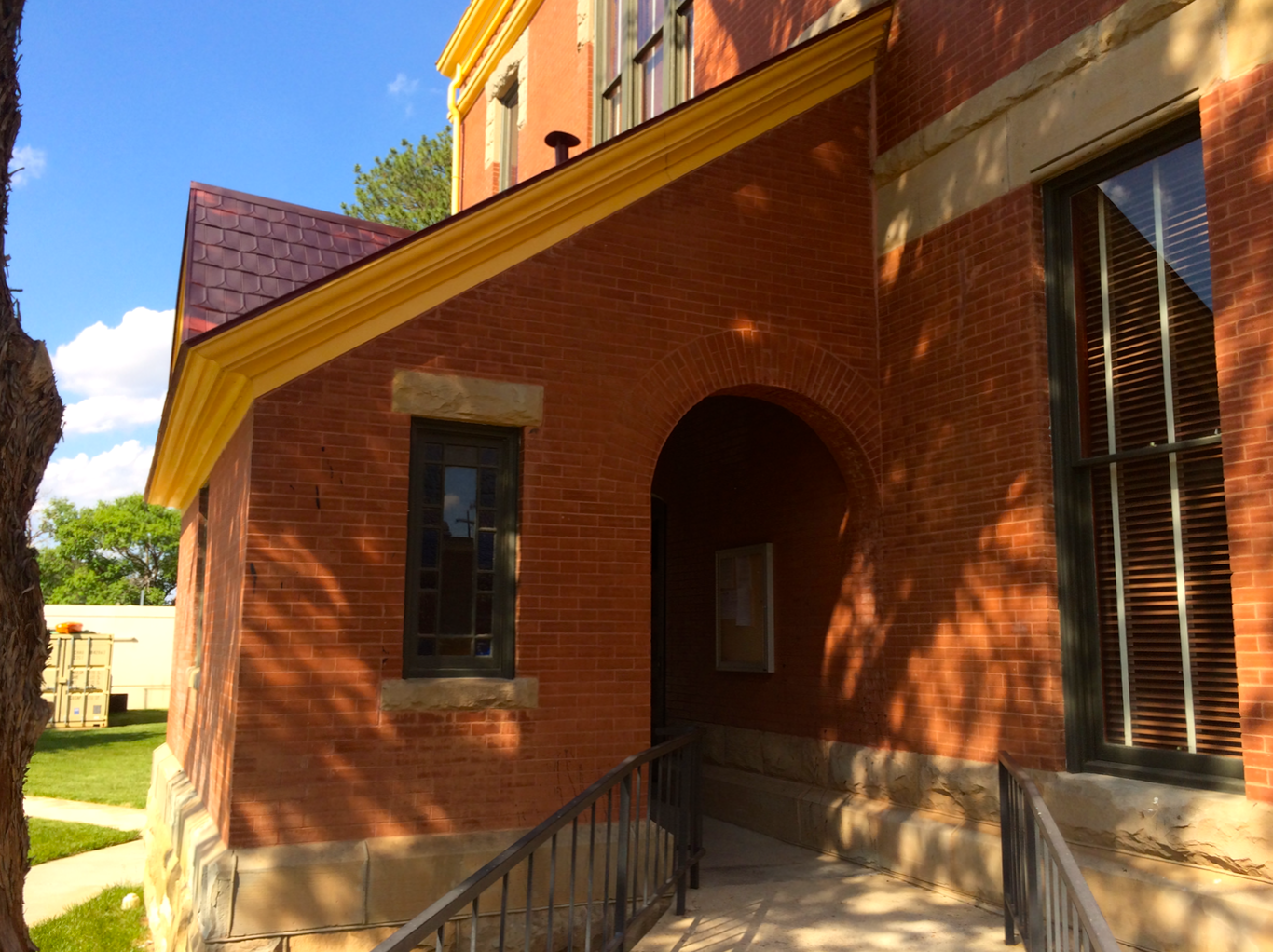 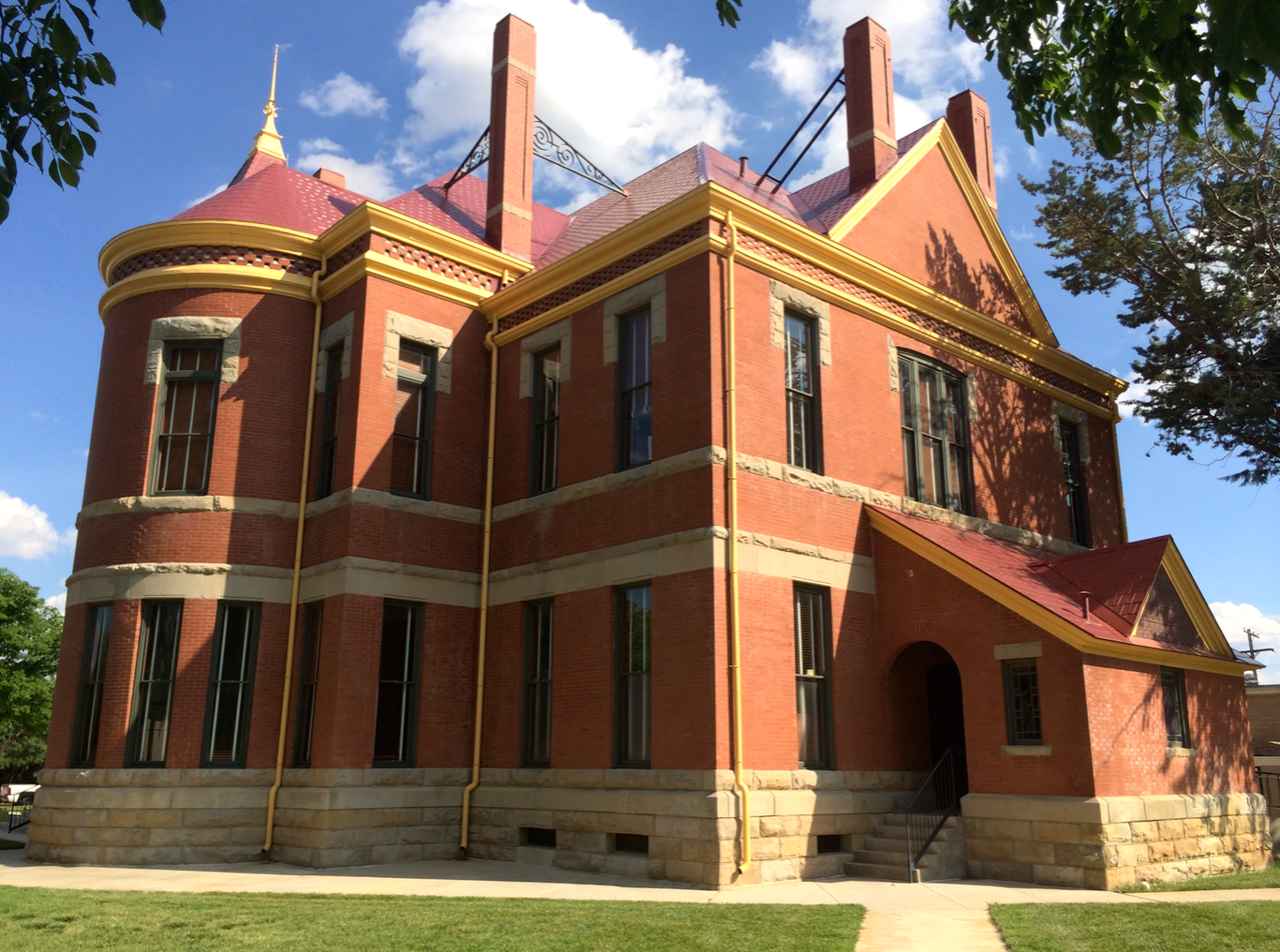 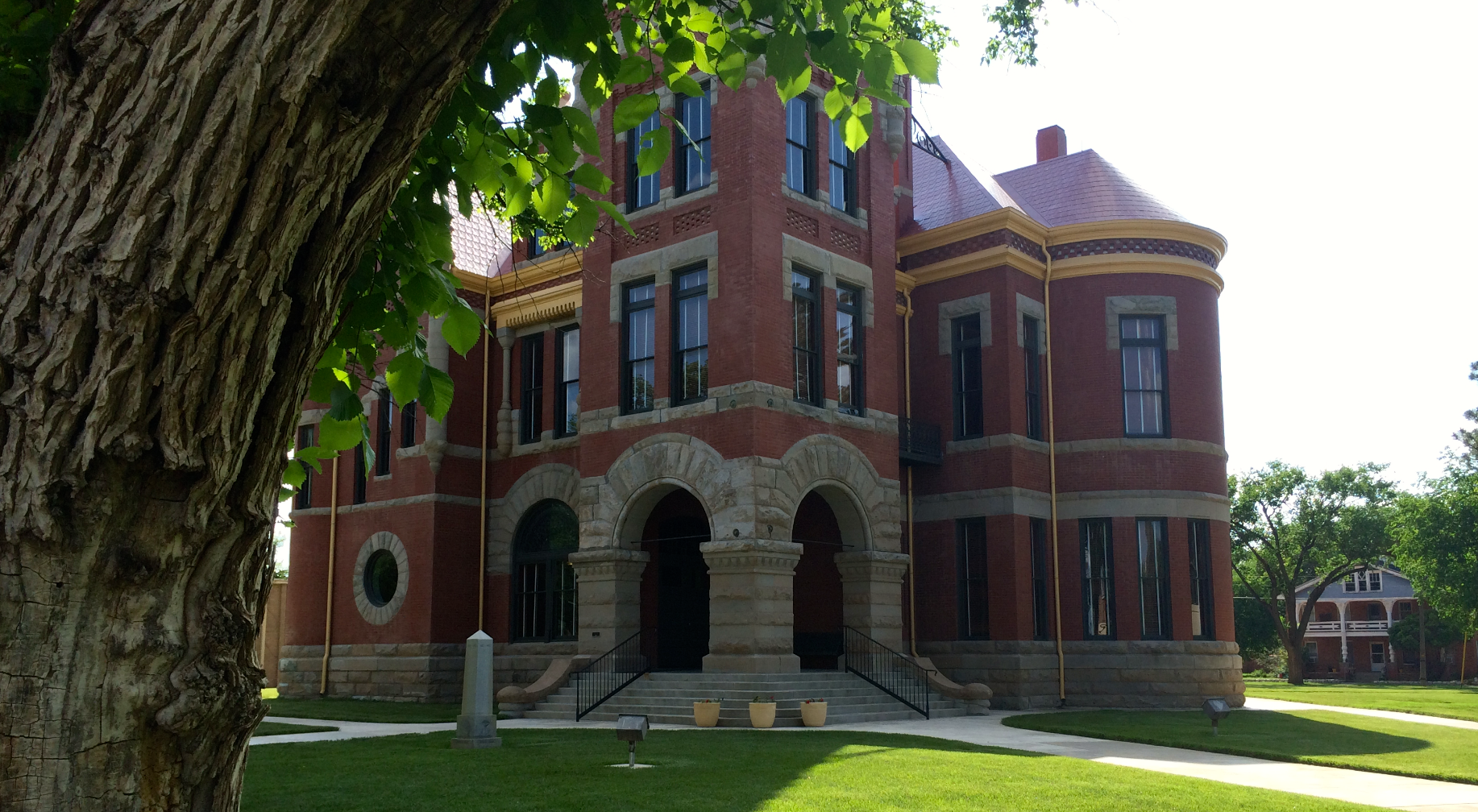 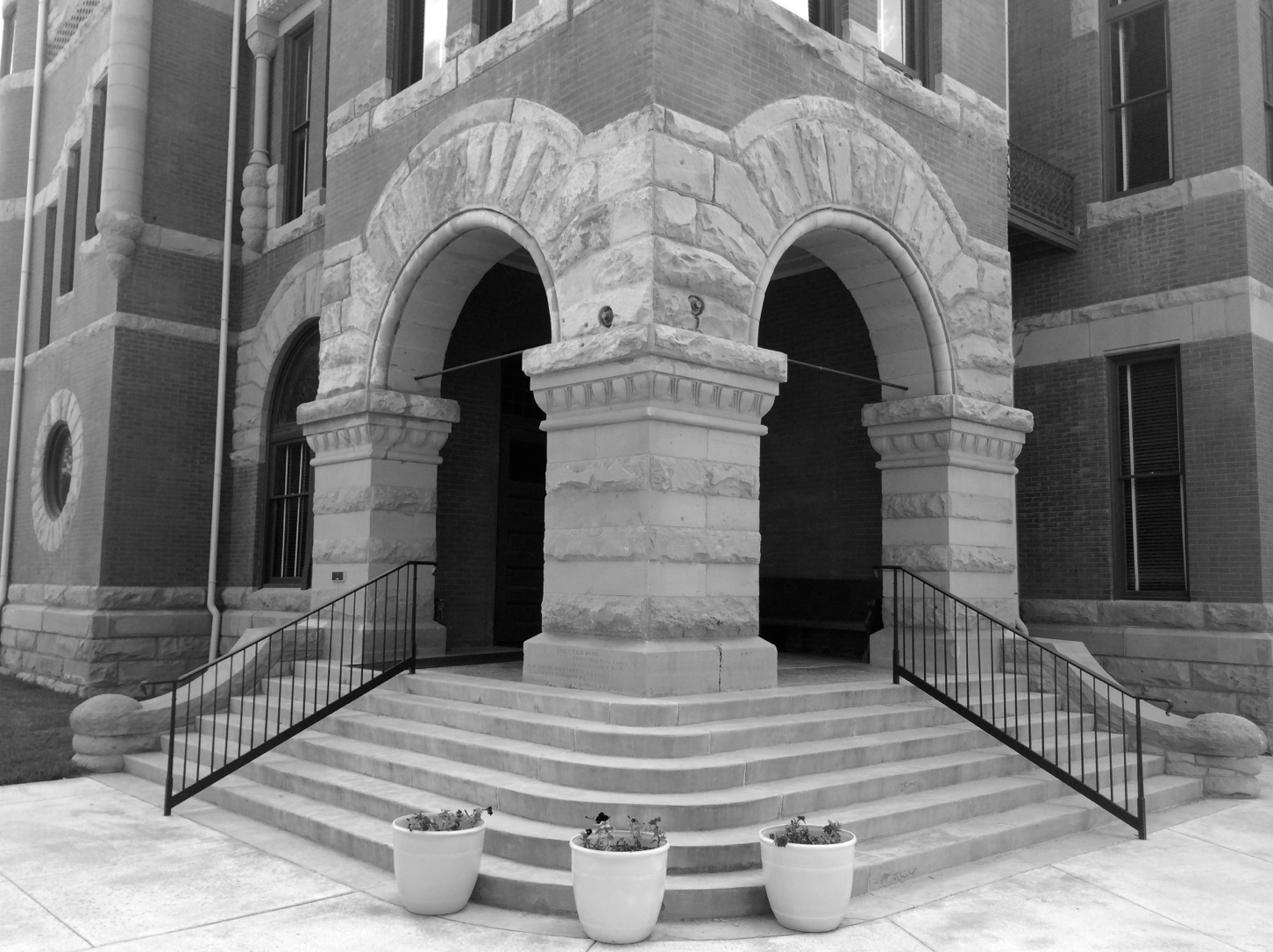 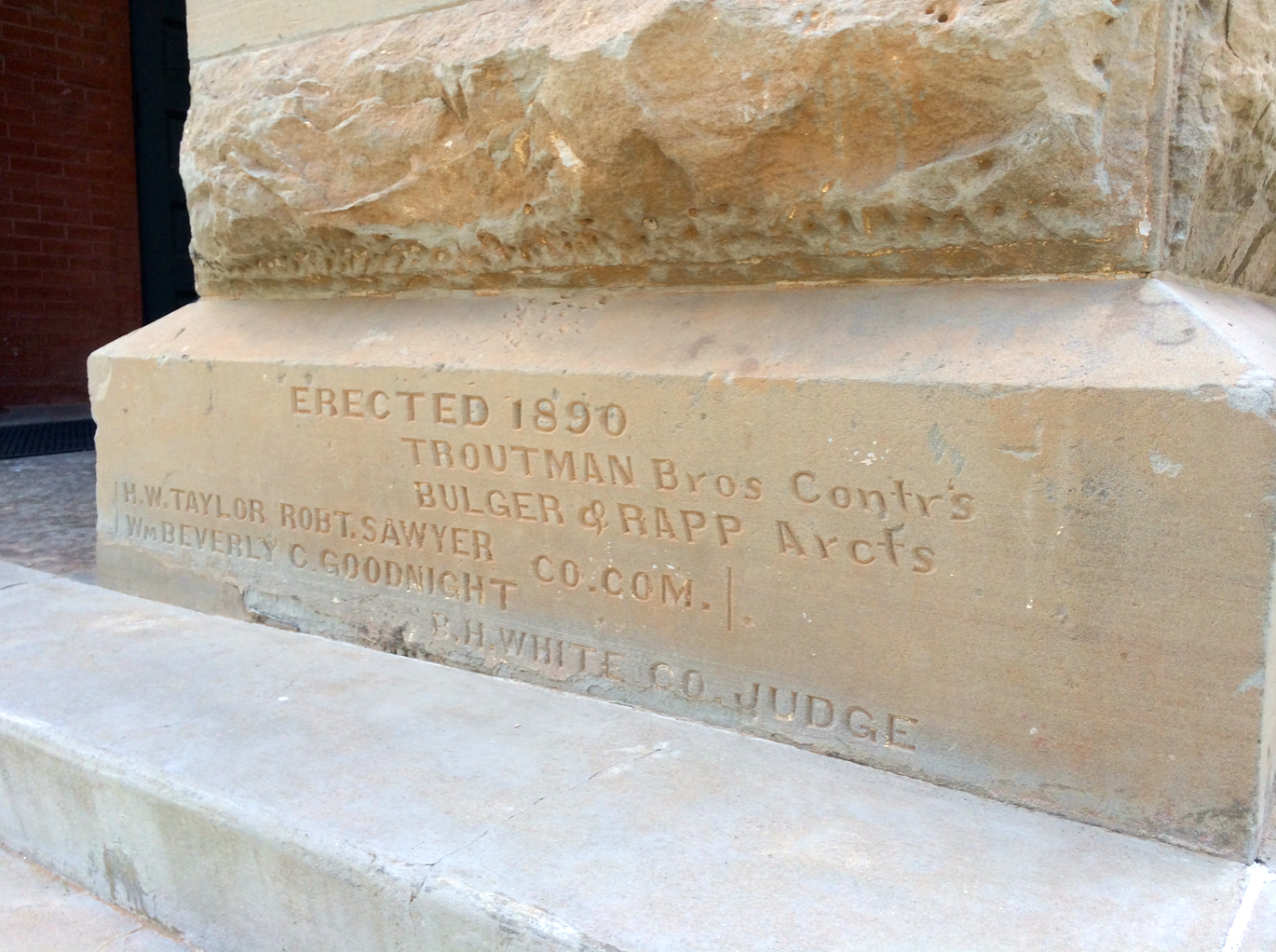 The cornerstone is housed at the base of the main entrance’s double arches. 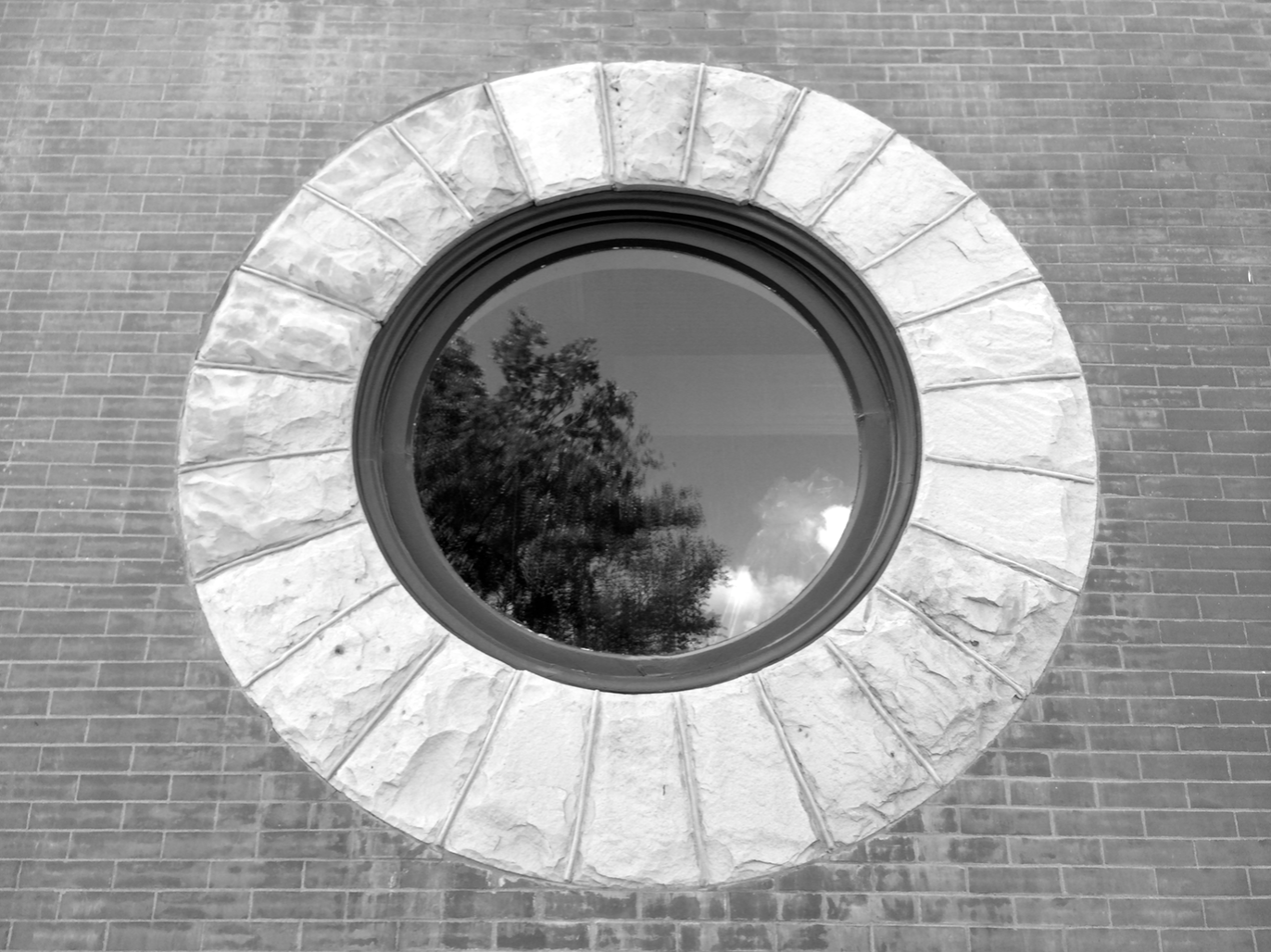 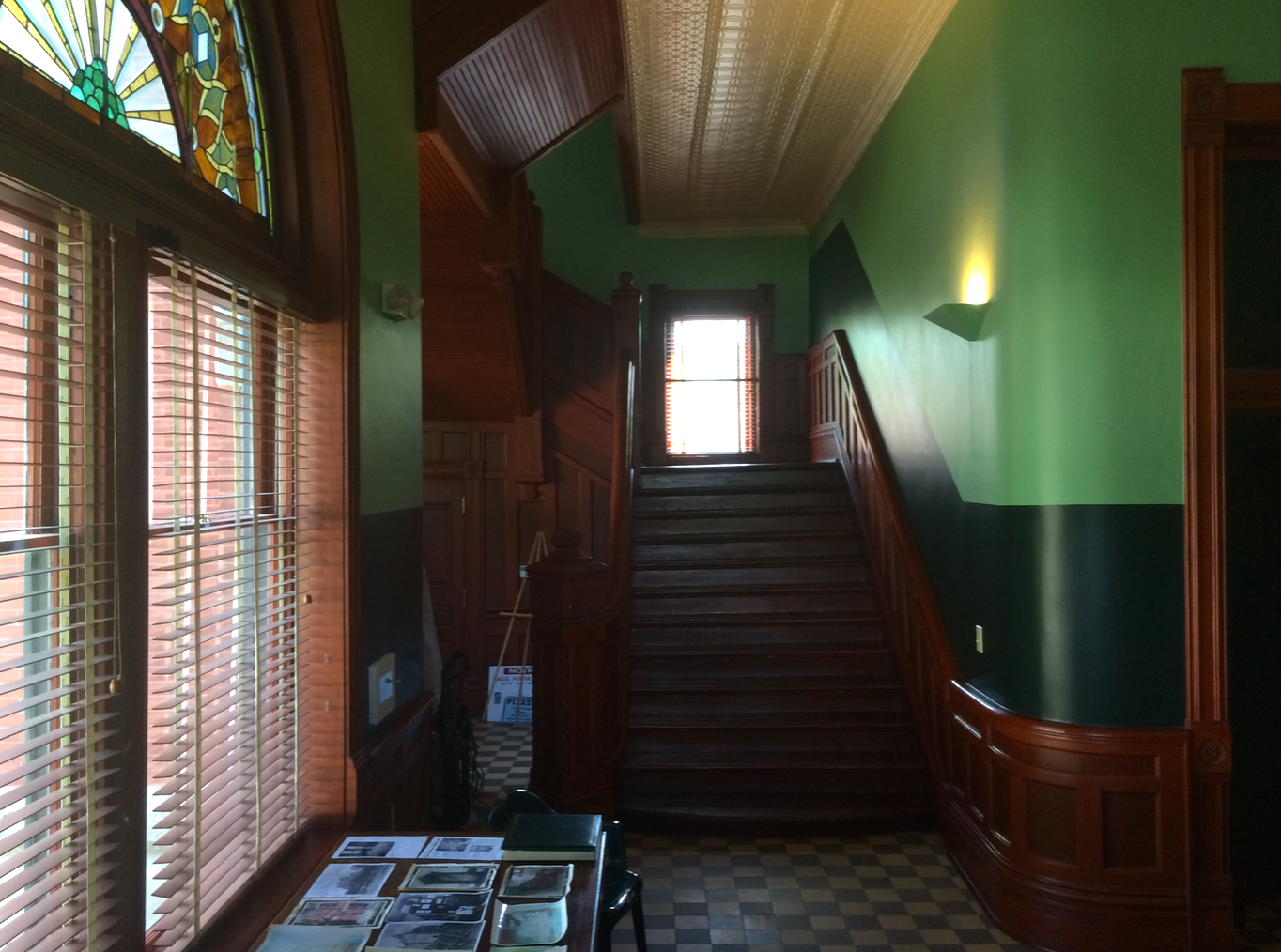 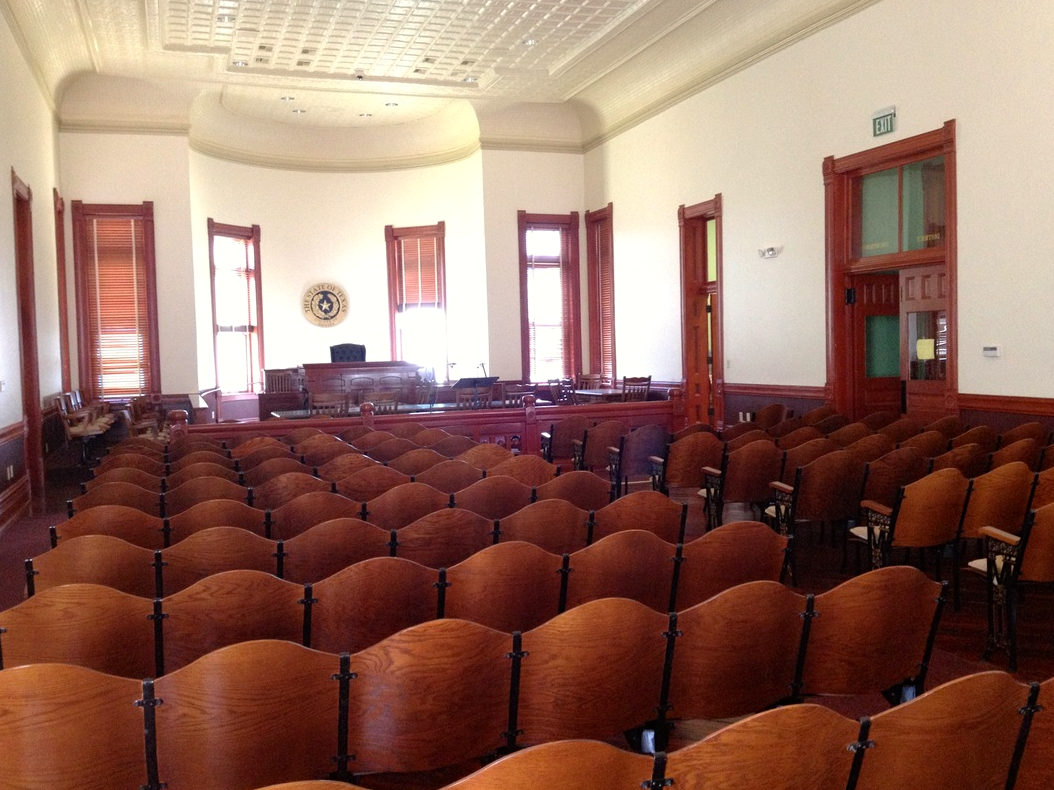 The courtroom is on the second floor.

The courthouse annex is directly behind the historic building. 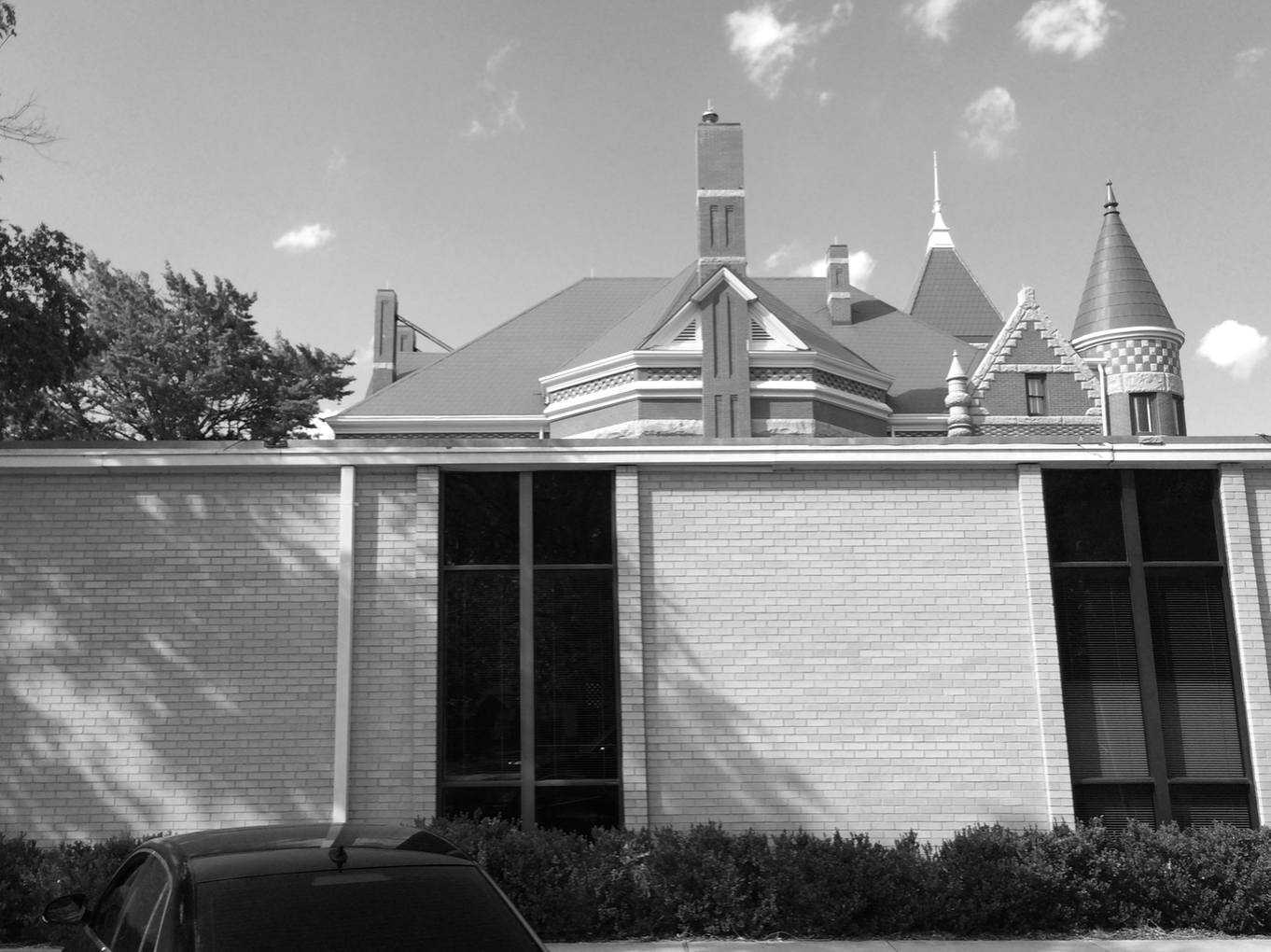 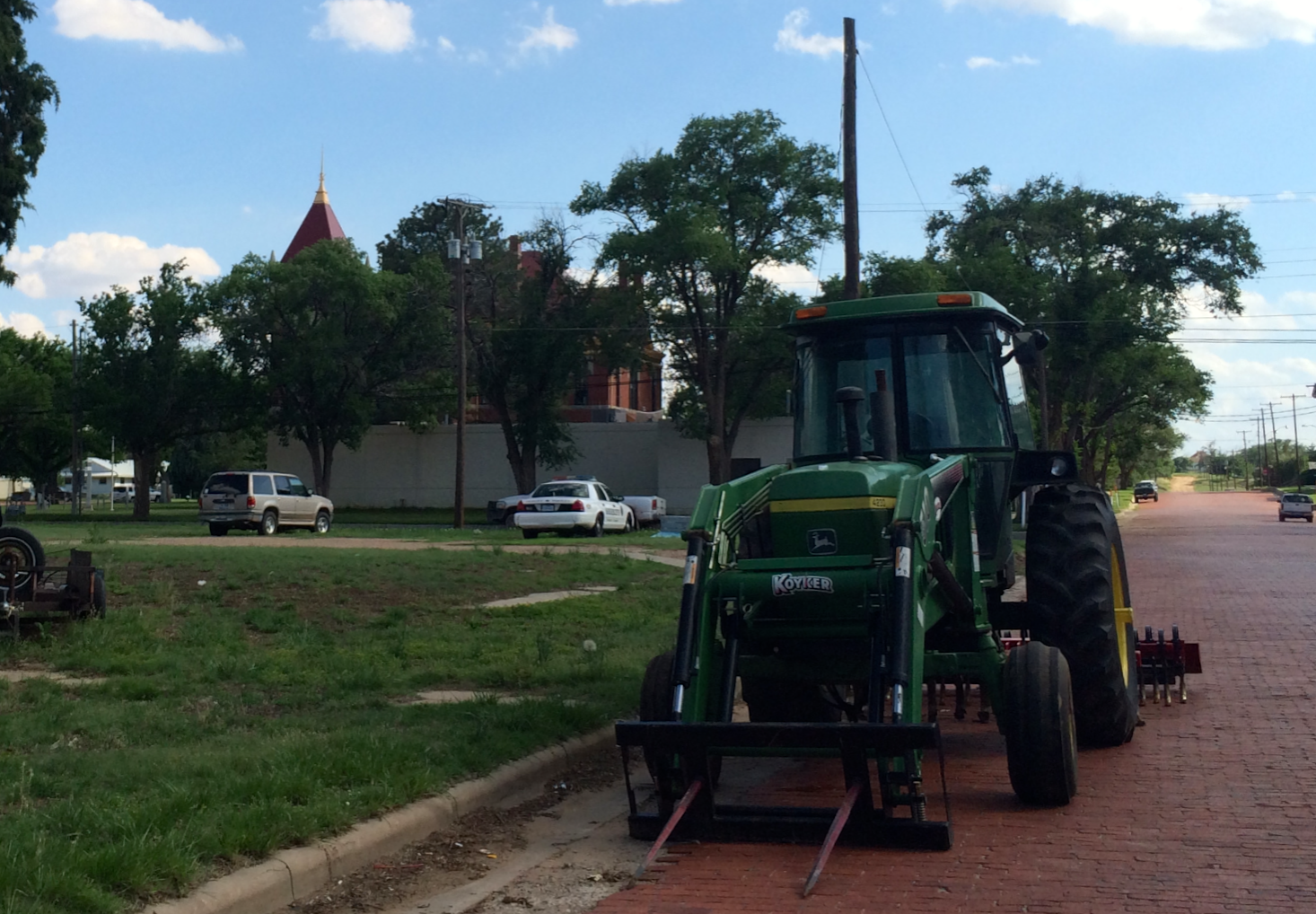