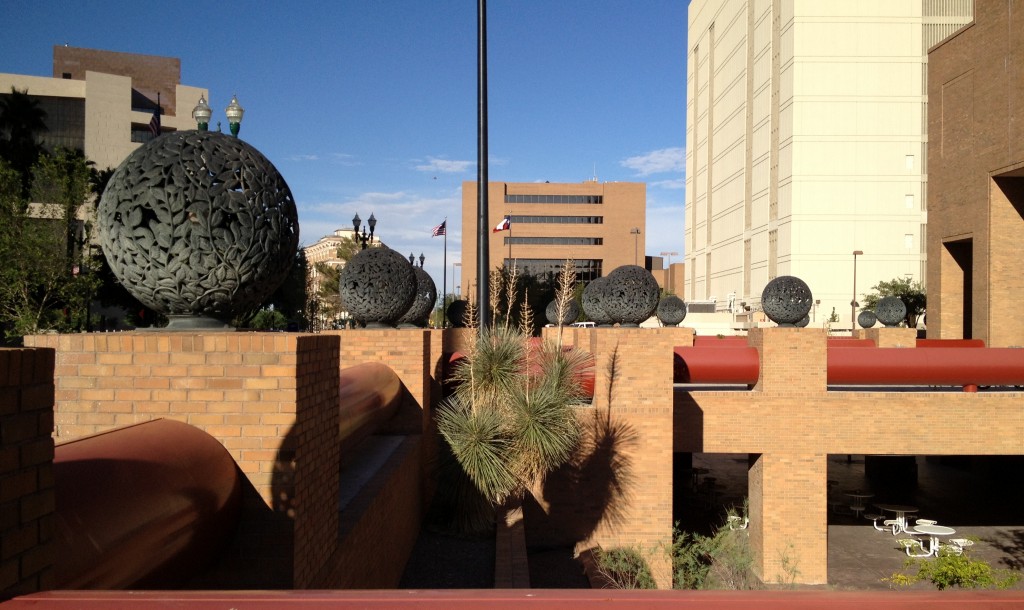 “The county comprises 1,057 square miles of desert and irrigated land that rises from an elevation of 3,500 feet at the Rio Grande to 7,000 feet at the summits of the Franklin Mountains.”

“Some 240 square miles of the county is occupied by the city of El Paso (1992 population 515,342), the largest United States city on the Mexican border, the fourth largest in Texas, and twenty-eighth in the United States. Other El Paso County communities include Fabens, Tornillo, Clint, San Elizario, Socorro, Horizon City, Canutillo, and Anthony. Although a major industrial area, El Paso County has few natural resources other than abundant sunshine and bounteous agriculture. There is no oil production, although there are two oil refineries.” 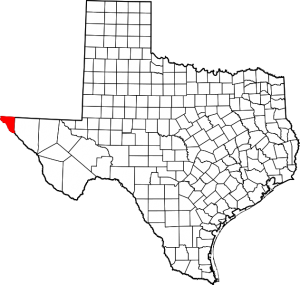 “The Spanish name El Paso del Norte denotes a historically important geographical point, the channel cut by the Rio Grande through the mountains to form a natural passageway for travelers to the north or south, east or west.”

“The pass continued to serve as a way station for travelers between Spanish Mexico and its far-flung dominions to the north. In 1680 an Indian uprising drove the Spaniards out of New Mexico. Many of them found refuge in the El Paso valley, bringing with them members of two Indian tribes, the Tiguas and the Piros. For these were founded the missions of Corpus Christi de la Isleta in Ysleta and Nuestra Señora del Socorro in Socorro.”

“The people of El Paso had little involvement with the stirring events of 1836–45, the period of the Republic of Texas. An old and valued part of the Republic of Mexico, the El Paso area went its own way. Then came the Mexican War, and the resulting Treaty of Guadalupe Hidalgo in 1848, which made all of the area north of the Rio Grande a part of the United States. Suddenly the historic gateway at the pass became important to Texas, and the state almost immediately attempted to assert its right to the area.”

“On March 15, 1848, the Texas legislature proclaimed Santa Fe County, which included the area of present-day El Paso County as well as other parts of west Texas and much of the present-day state of New Mexico.”

“In January 1850 the Texas legislature subdivided Santa Fe County into four smaller counties, one of which was named El Paso County; and in February 1850 Robert Neighbors arrived again in El Paso in another attempt to organize the area. This time his efforts were successful, and San Elizario, the ancient Spanish presidio town, was chosen to be the county seat. With its population of 1,200 San Elizario was at the time the county’s largest town and possibly the largest settlement between San Antonio and the West Coast. Parts of the original county were subsequently stripped away from Texas as part of the Compromise of 1850, passed by the United States Congress in November of that year. In its resulting form the county also included the present Hudspeth and Culberson counties; Culberson was separated in 1912 and Hudspeth in 1917.”

“Though the Republican party dominated county politics until 1886, the county was convulsed during this period by political conflicts, such as the Salt War of San Elizario of 1877. Although on the surface this was a struggle over rights to salt from the salt beds 100 miles to the east, it was primarily a conflict between political factions. It came to a bitter climax of riot and murder in the streets of San Elizario. One result of the conflict was that Fort Bliss, temporarily not in use, was quickly regarrisoned, to be a part of El Paso County life from that time forward. Postwar county politics also featured a protracted county-seat war. In 1866 the county’s government was moved from San Elizario to Ysleta, one of the oldest settlements in the county. Then, in 1868, San Elizario again became county seat; it retained the role until 1873, when another election made Ysleta county seat. In 1883, after yet another hotly contested election, El Paso became the county seat.”

“Modern El Paso County is fronted, just across the Rio Grande, with another metropolitan area, Ciudad Juárez, Chihuahua, the largest Mexican city on the border (estimated population in 1985: 750,000). The two populations shared the experiences of Civil War in the United States and of the Mexican Revolution. The blending of two cultures is everywhere present on both sides of the border. More than 60 percent of the residents of El Paso County have Spanish surnames.”

El Paso County has had seven courthouses (if you include one as a remodel), and holds the record for most courthouses of any county (tied with Liberty and Limestone Counties). The major courthouses are those of 1886, 1917 (and its 1955 remodel), and 1991 (the courthouse that still stands). 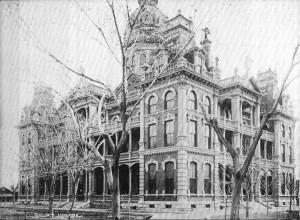 The 1886 structure was designed by Alfred Giles. The THC has it down has: “[It included] Italianate pediments and Mansardic roof pavillions, along with a high central tower, and slate roofing in contrasting colors decorated the building.” Without as much of the ornamentation, this courthouse resembles the still-standing Presidio County Courthouse in Marfa. It no longer stands.

From the THC narrative/Photo courtesy: THC

The structure was designed by local architect Henry Trost of the firm Trost & Trost, and was completed in 1917. 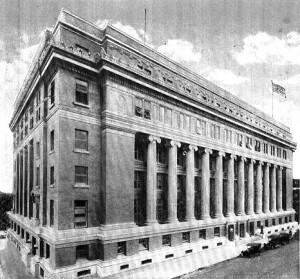 In 1955 it was significantly remodeled beyond recognition. The historic structure (or what as left of it) was demolished in 1992 after the current courthouse had existed for about a year, in order to make way for additions to the new building. The 1991 current building stands on approximately the same site as the 1917 one. 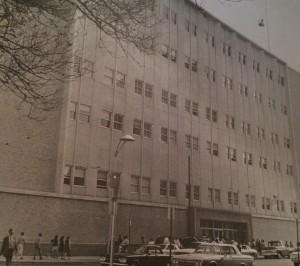 Number for the County: Seventh 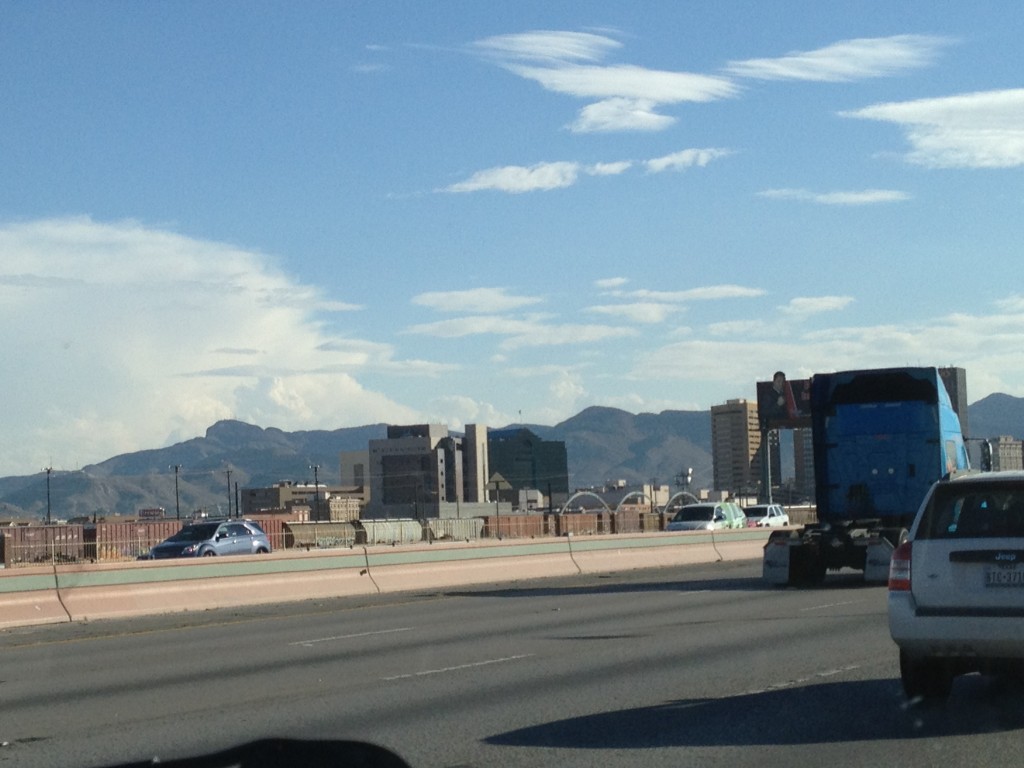 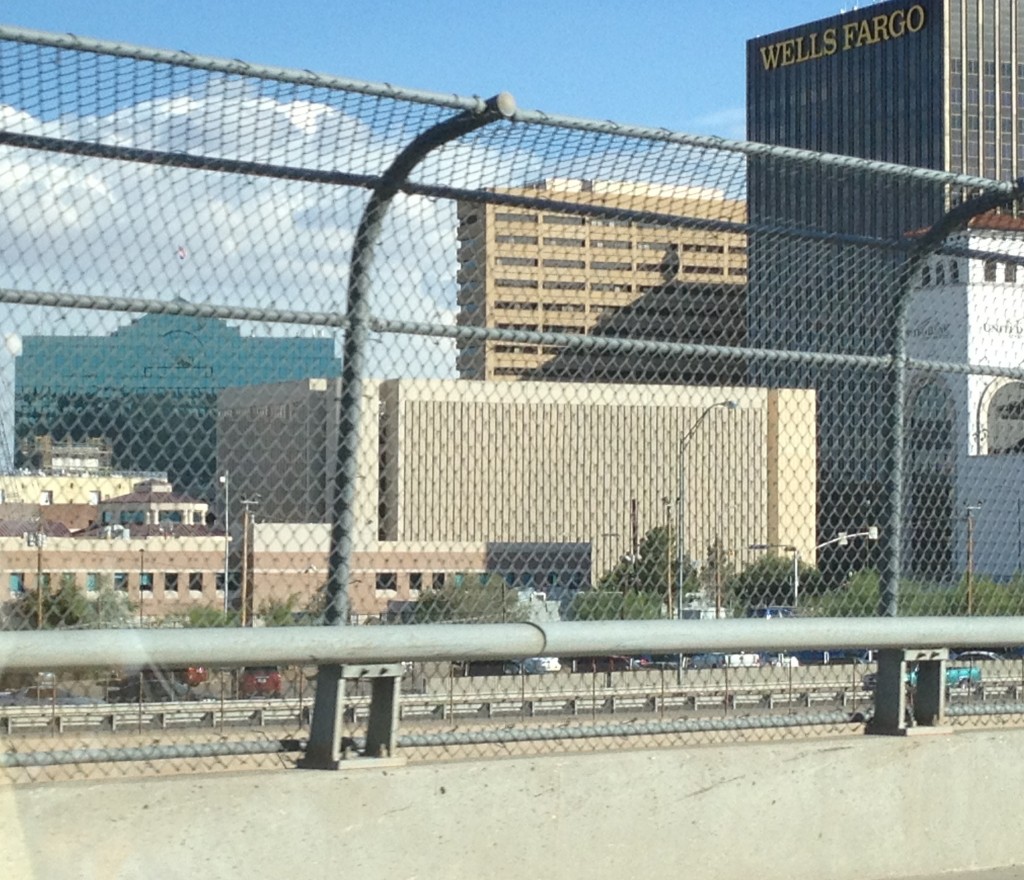 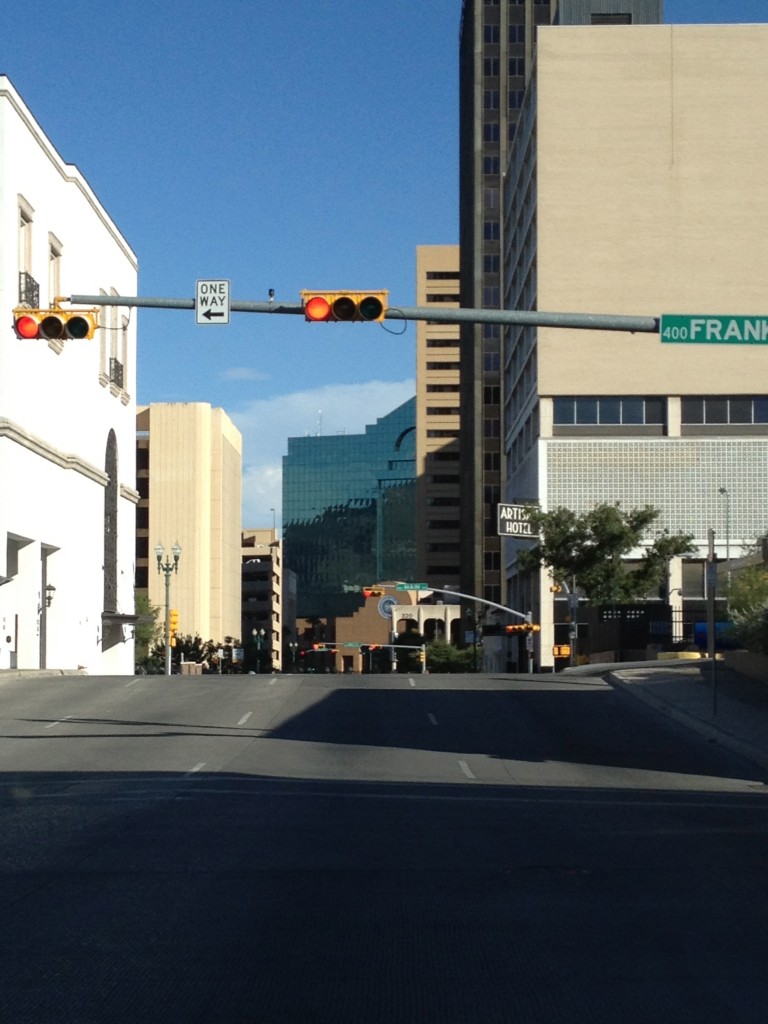 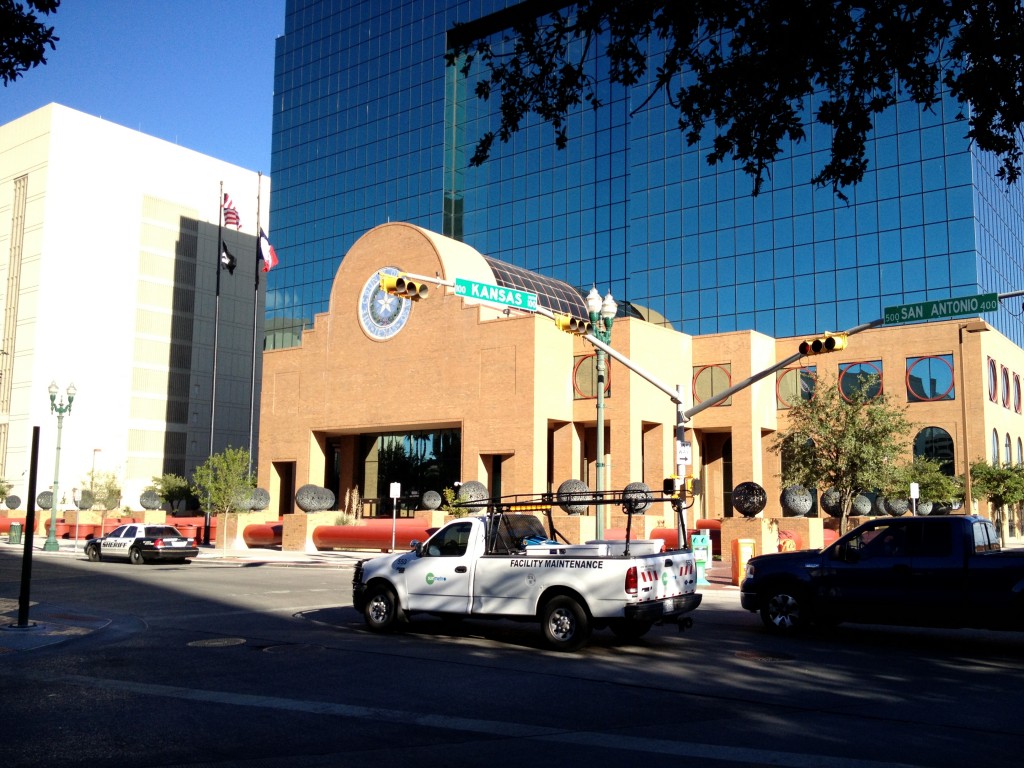 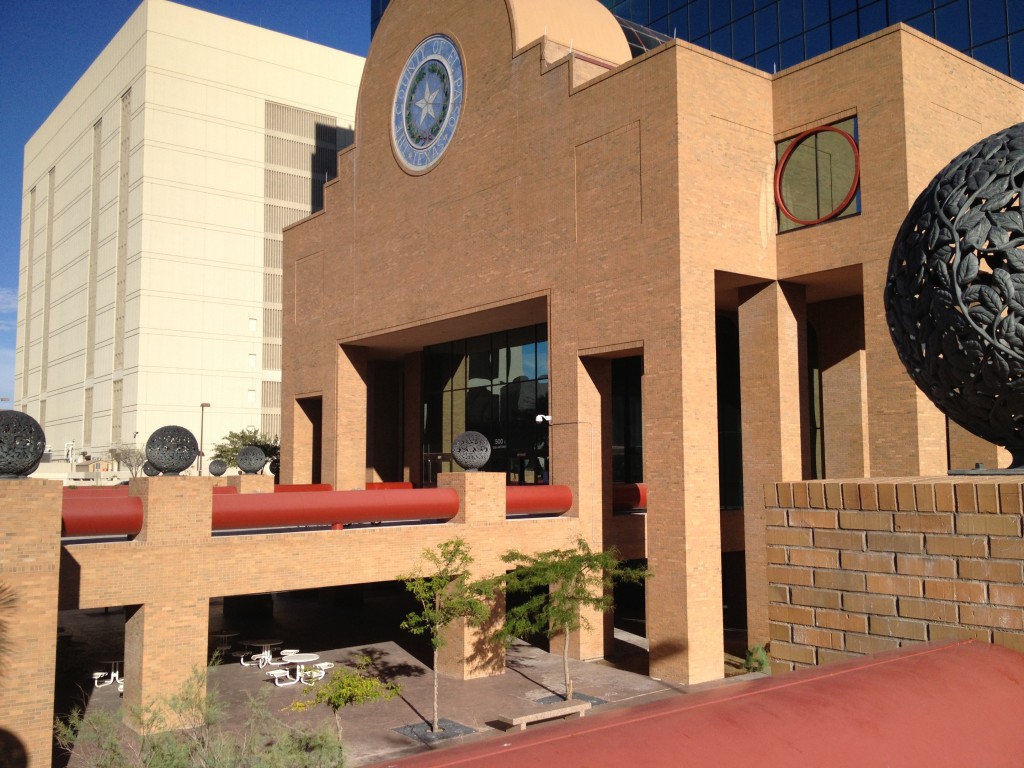 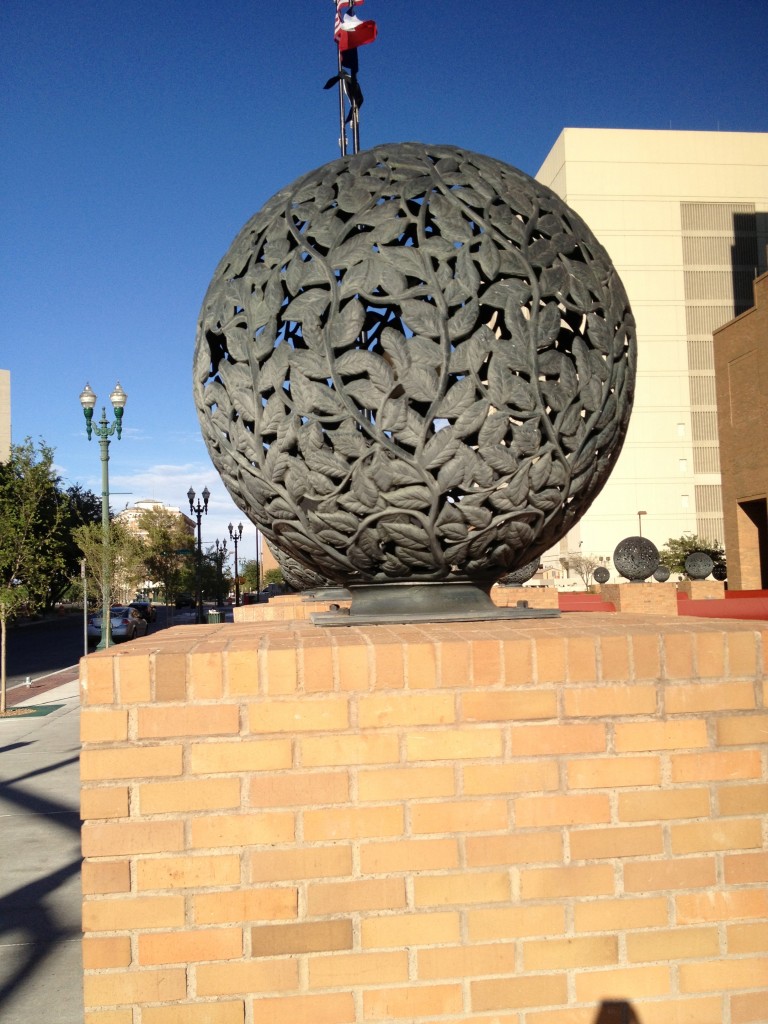 Several of these large, ornamental spheres are clustered around the entrance. 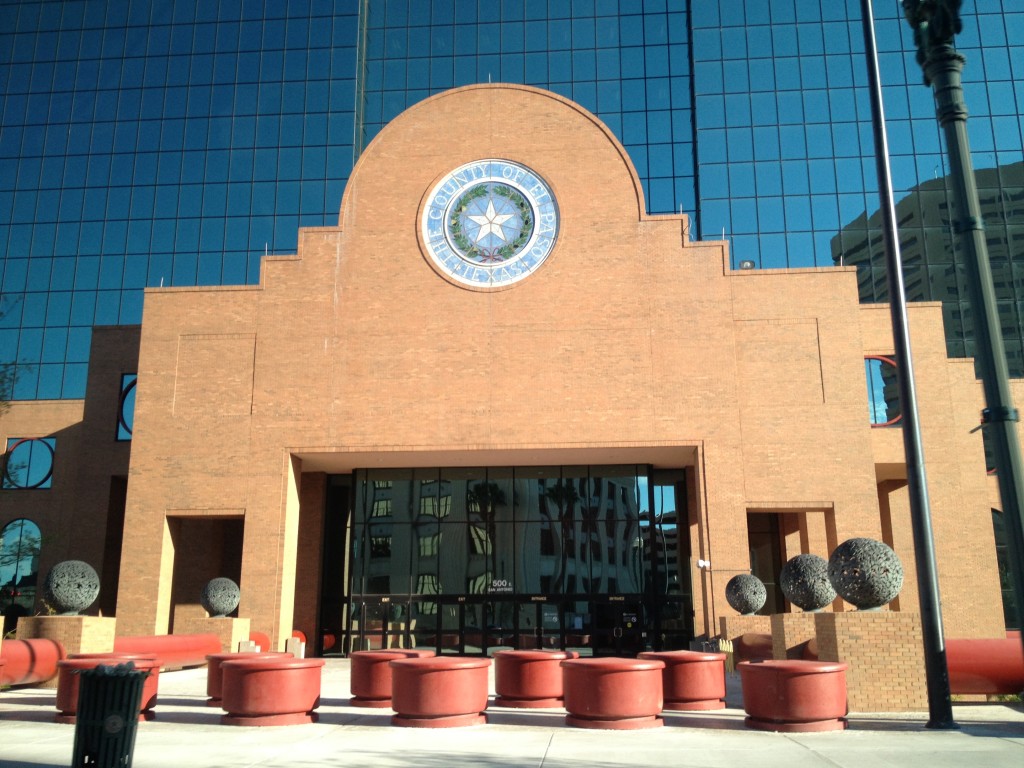 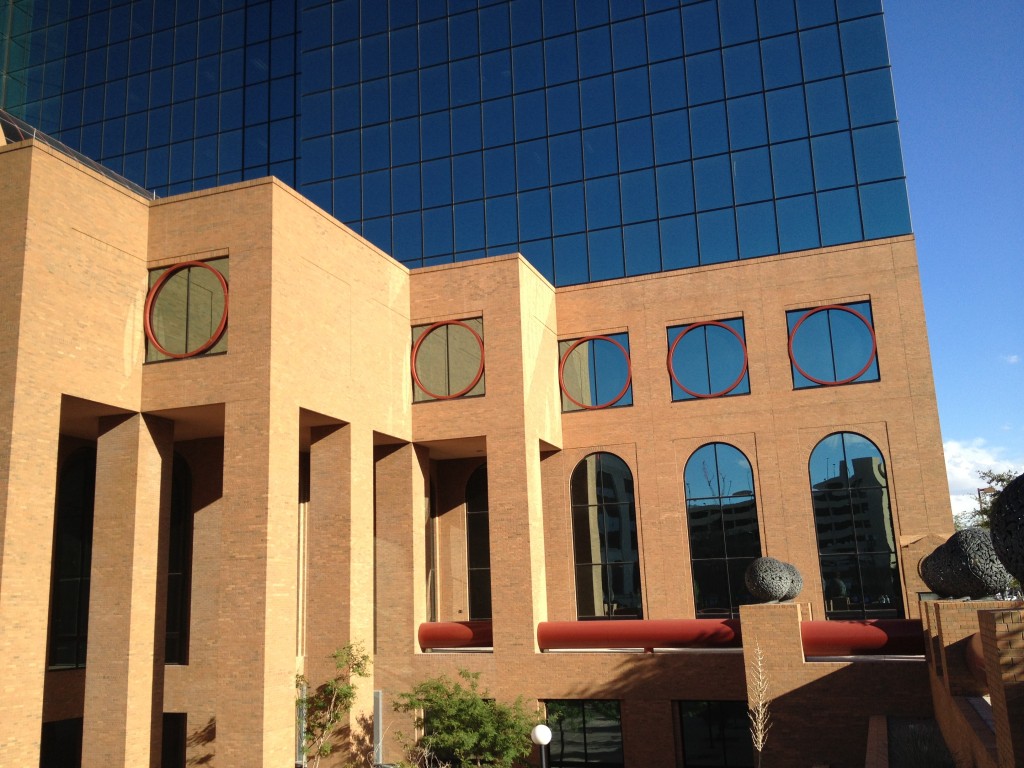 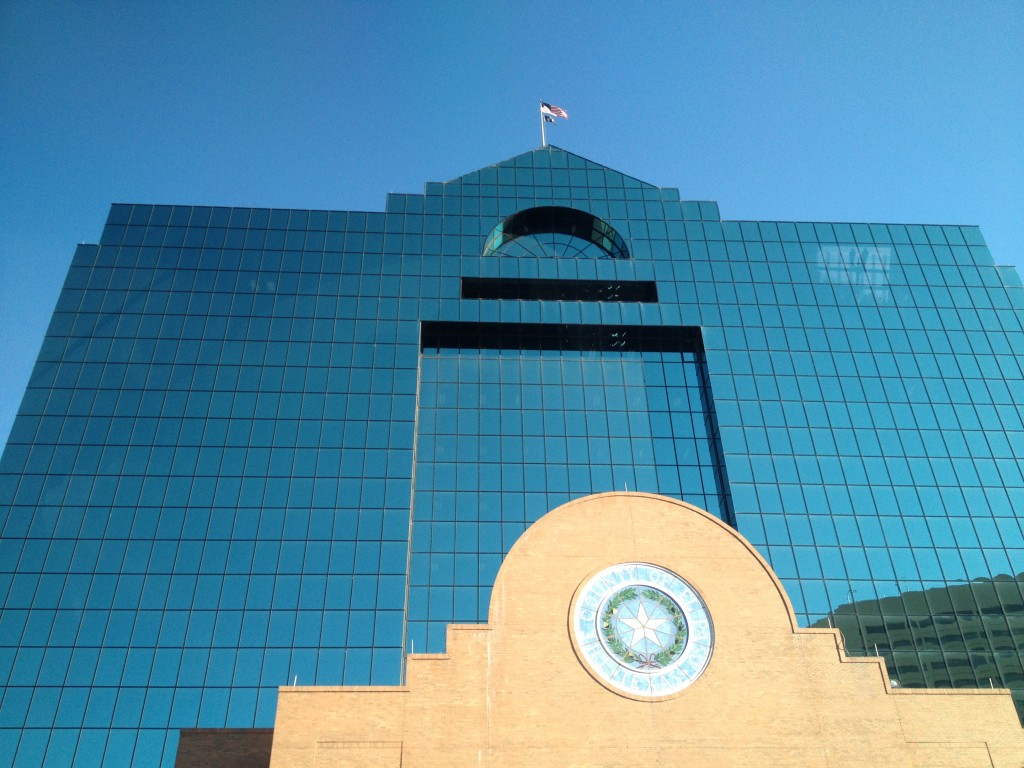 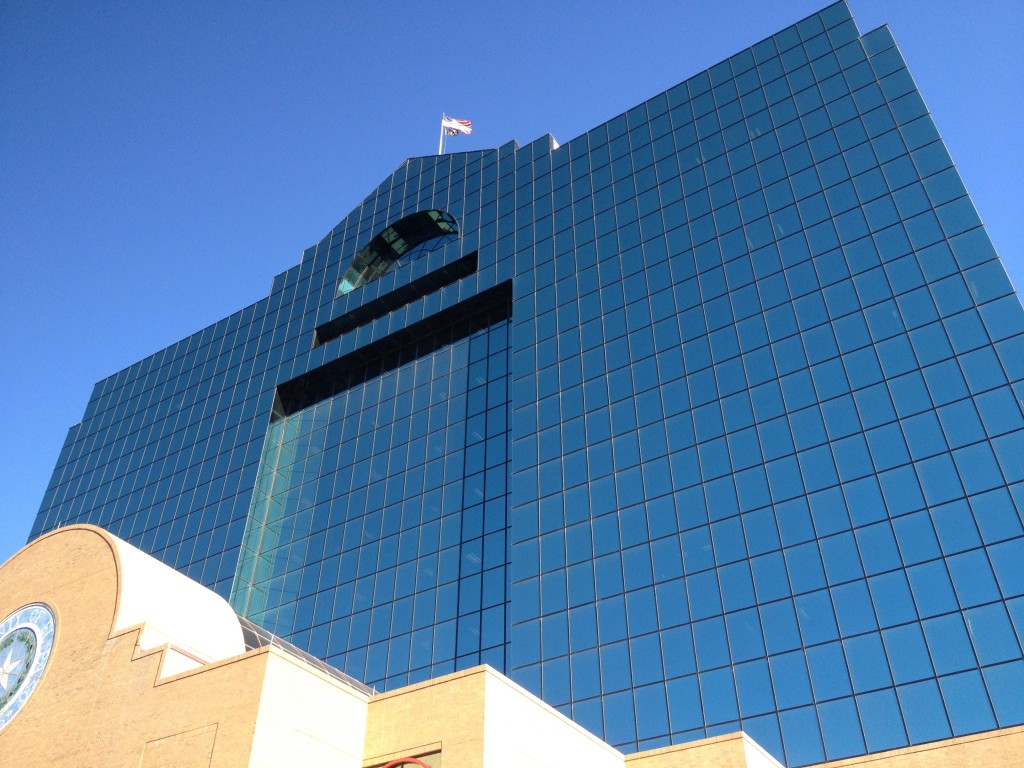 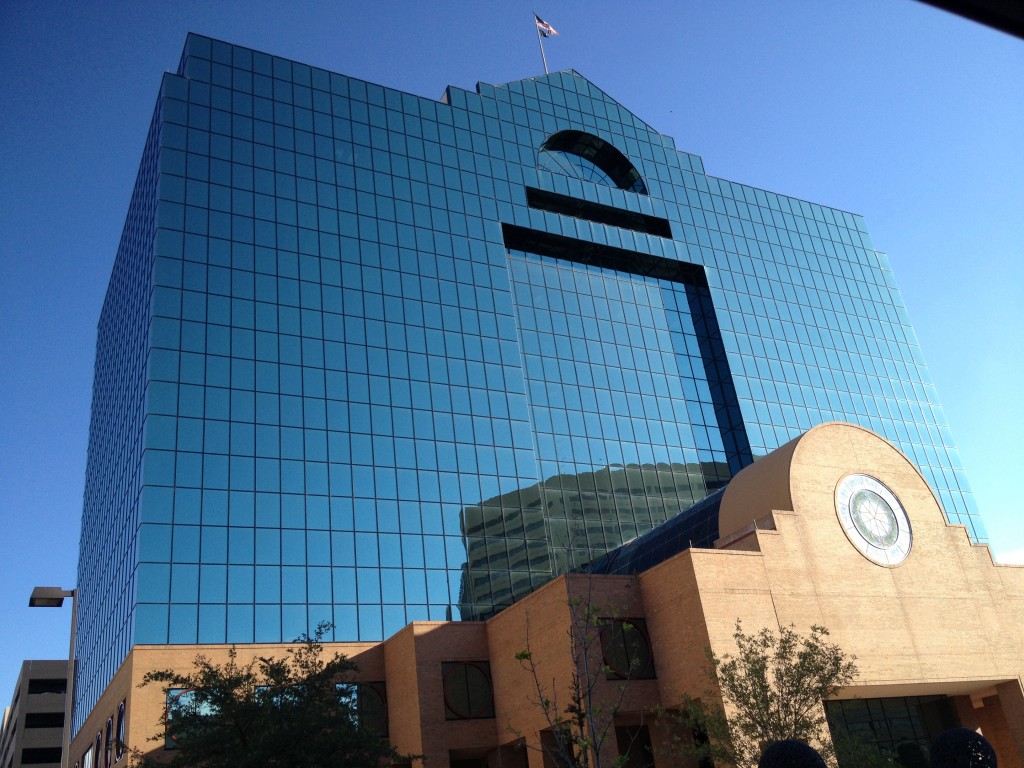 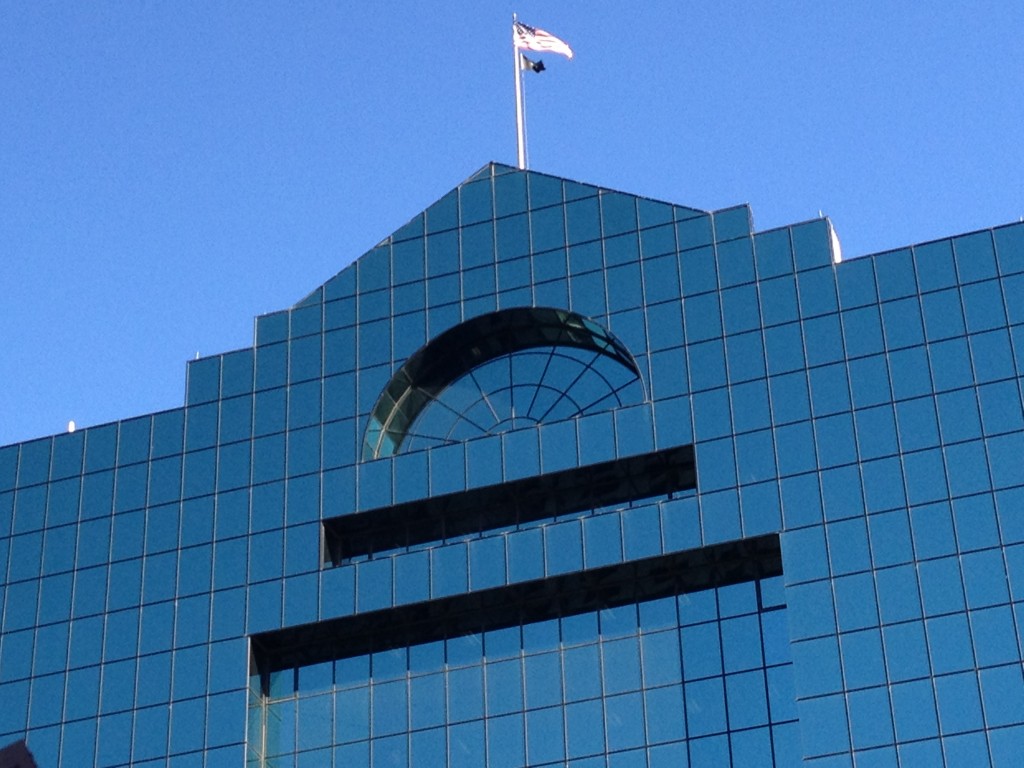 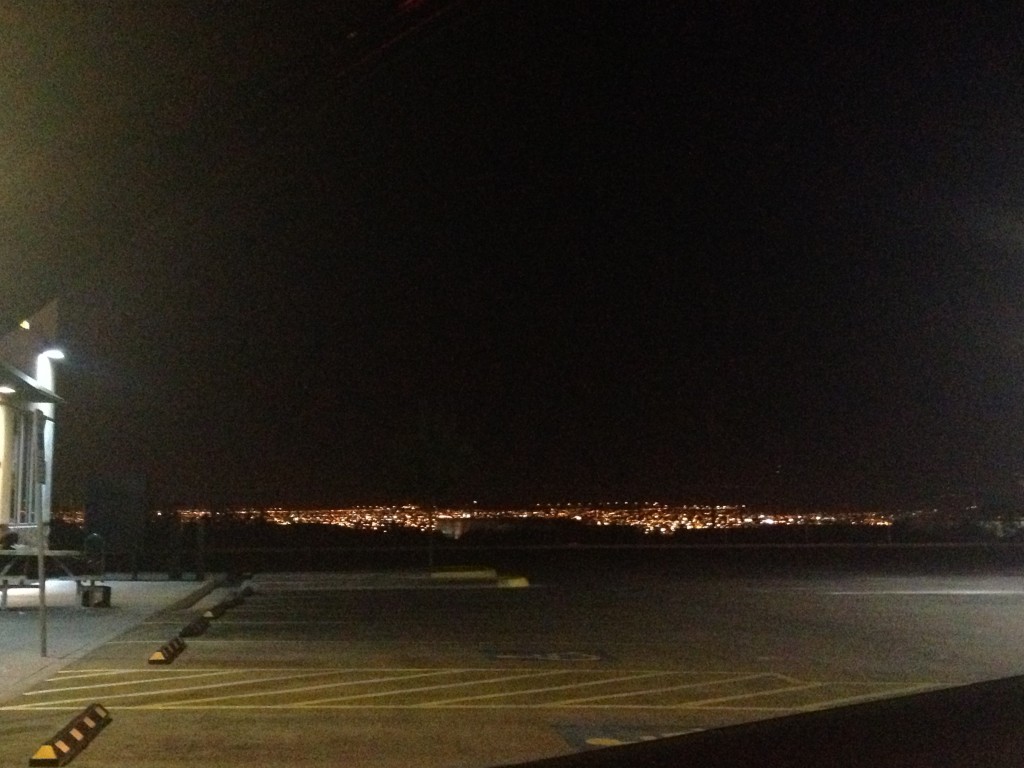 Ciudad Juarez as seen from the parking lot of a gas station just off of I-10 at approximately 5:30-6:00 AM Mountain Time.