“Ellis County comprises 939 square miles of the Blackland Prairie. Away from the streams it is almost treeless except for scattered mesquite, cacti, and shrubs. Native vegetation consists mainly of bunch and short grasses, including Indian, buffalo, grama, big and little bluestems, and three-awn. Such native trees as ash, cottonwood, pecan, hackberry, bois d’arc, oak, and elm grow along watercourses. The terrain is level to rolling, with an elevation ranging from 300 to 700 feet above sea level.”

“Before the Texas Revolution in 1836, the Mexican government granted land in what is now Ellis County to Thomas J. Chambers, Rafael Peña, and Alejandro de la Garza. In 1841 and 1842 the Republic of Texas granted land to William S. Peters in the northern half of the county, and Charles Fenton Mercer received a grant in 1843 in the southern part. One of the first settlers in the area was William R. Howe, who settled late in 1843 near the site of present Forreston.”

“Acting on a bill sponsored by Gen. Edward H. Tarrant, the state legislature officially established Ellis County on December 20, 1849. It was drawn from Navarro County, organized in February of the following year, and probably named for Richard Ellis, president of the Convention of 1836. Waxahachie was named the county seat and established on land donated by E. W. Rogers in August 1850.”

“A boundary dispute with Johnson County was temporarily settled during Reconstruction, when Ellis County ceded nearly 100 square miles of land. The argument resurfaced in the late 1880s and was finally peaceably settled by a new survey of the line in 1939.”

“Ellis County found itself deeply embroiled in the secession crisis. Waxahachie citizens formed a chapter of the Knights of the Golden Circle, and in the fall of 1860 rumors of slave insurrections in Waxahachie and in nearby communities led to the lynching of a number of blacks and allegedly antislavery whites. In January 1861 Amzi Bradshaw and T. C. Neel represented Ellis County at the state Secession Convention in Austin. The following month the citizens of the county overwhelmingly supported secession.”

“After the Panic of 1873 the heavy immigration from the Old South cotton areas prepared the country for its future leadership in cotton culture. The population almost tripled, growing from 7,514 in 1870 to 21,294 in 1880. Cotton production increased sixfold by the end of the decade, when it amounted to 18,956 bales.”

“Ellis County continued to be agricultural and rural from 1880 to 1930. The population grew quite rapidly in the closing decades of the nineteenth century, to 50,059 in 1900, and increased more slowly thereafter to 55,700 in 1920. A slow decline set in by 1930, when the population was 53,936. The black population grew more rapidly than the white, as African Americans increased to almost one-fourth of the county population in 1930.”

“Two electric railway lines were also built by the Texas Electric Railway Company around the time of World War I. The two earliest roads were stage roads leading from Dallas to Waco and Dallas to Corsicana. By 1892, after some lobbying in the county seat, a substantial number of iron truss bridges were built over Ellis County creeks.”

“The 1930s and 1940s marked the beginning of changes in Ellis County at least as important as those brought on by the Civil War and the coming of the railroad. The Great Depression drastically affected the county. There were more than 2,100 fewer farms in 1940 than in 1930, a trend that continued into the 1980s. In the same period the value of farm property fell 42 percent. Unemployment became a problem.”

“As Ellis County suffered an agricultural decline and a population loss from 1930 into the 1960s, other developments indicated recovery. Since many of the area soils were damaged before World War II, soil-conservation districts were established in the 1940s to improve the agricultural output of the county. The automobile revolutionized transportation and necessitated improved roads. Ellis County had only 10,823 motor vehicles registered in 1938. By 1969 the total was 18,493. All major roads in the county were paved by 1948.”

“The county population began to increase again in the 1960s, reaching 46,638 in 1970, when the number of blacks had declined to 8,593, or some 18 percent of the whole. The population reached a new high of 59,743 in 1980, when black residents constituted 12 percent of the whole and Hispanics had risen to 10 percent. The decrease in the number of farms slowed, while agricultural property value rose to more than $275 million.”

“By 1990 the Ellis County economy showed a balance between varied manufacturing, agribusiness, and commerce. The county population was 85,167. For the first time Hispanic residents formed a higher percentage (13.2) of the county population than blacks (10 percent). More than a third of the county’s residents lived in the two largest communities, Waxahachie and Ennis. Many county residents were employed in Dallas, and the growth of such communities as Midlothian, Red Oak, Ferris, and Ovilla demonstrated how county development had become tied to the Dallas-Fort Worth economy.”

“In 1989 Ellis County was chosen as the site for the Superconducting Supercollider, a planned fifty-four-mile tunnel in which electrically charged protons would be accelerated for collision experiments. Ellis County residents exulted at the prospect of a burst of prosperity. The Texas 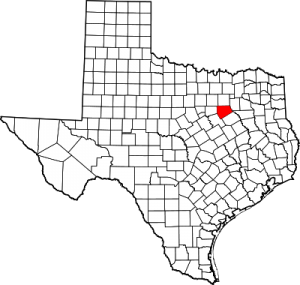 National Research Laboratory Commission oversaw the purchase of almost 17,000 acres of land and began to construct facilities west of Waxahachie. But opposition to the project in Congress, resulting from charges that it was “pork” for Texas and from uncertainty about the value to be derived from a supercollider, resulted in the defunding of “Super Clyde” in 1993. At that point some 20 percent of the project had been completed, including fourteen miles of tunnel, a magnet-development complex, the supercollider central facility, and the linear accelerator. At its peak the project had employed some 2,100 people at the Ellis County site. In 2005 the Ellis County government owned the site, and was actively looking for a buyer to develop it.”

I was the guest of Ellis County and Waxahachie on January 3, 2011 and returned to rephotograph the courthouse on June 12, 2014. 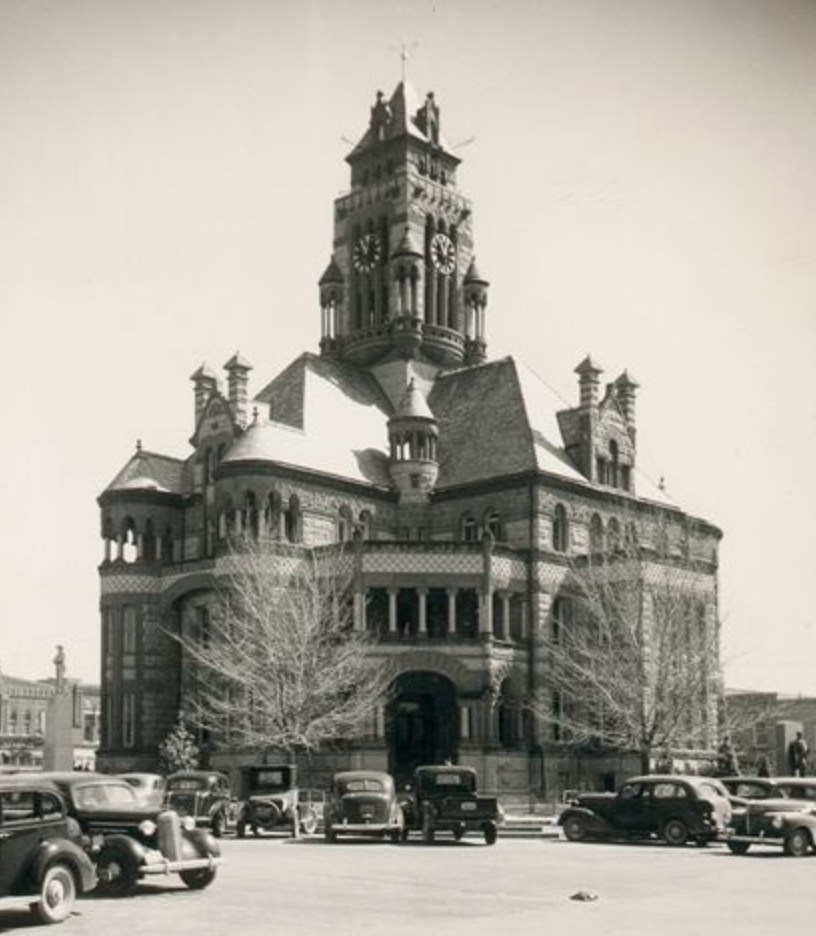 “The Ellis County Courthouse, designed in 1895 by J. Riely Gordon, is rich in Romanesque detail. Even though the courthouse was designed by Gordon, he was not directly involved in the construction of the courthouse. A set of Gordon’s plans were sold to Ellis County by Otto Kroeger, a building contractor who supervised the courthouse’s construction. When the building was completed in 1897, it stood nine stories tall and featured a total of 23,739 feet. The massive quality of the building is enhanced by the exterior surface treatment of the masonry: Pink granite with a rock-faced texture is combined with red sandstone for the window lintel and sill bands. Windows are typically Romanesque in detail with rounded arches and slender proportions. An extensive gray slate roof of steep pitch follows the various undulations around the exterior walls. Projecting from the roof are turrets with conical roofs and dormers with chimney extensions. The copper cornice, turret detailing and a terra cotta frieze below the cornice, further embellish the courthouse. The center of the courthouses cross axial plan is marked by a massive clock tower with four clock faces and a pyramidal roof. On the interior, various county offices radiate from the central stairwell on all four levels. Originally, this stairwell was open from the basement to the top of the bell tower, but unfortunately, it has been converted to an elevator shaft. The interior of the courthouse still features original wainscot and mill work in many areas. The courthouse entrances are located in the four corners formed by the projecting arms of the cross. Unfortunately, the Ellis County Courthouse has been altered greatly through the year. The third floor balcony, which once overlooked the district courtroom, was removed in order to provide space for a additional third story offices. The exterior second floor porches were enclosed with glass block, further altering the courthouse’s appearance.” - Texas Historical Commission

Designed by the master of courthouse architects, James Riely Gordon, this massive and impressive Romanesque design was completed in 1896, with help from contractor Otto Kroeger of San Antonio. Today, it is considered by many to be Texas’ most beautiful courthouse. 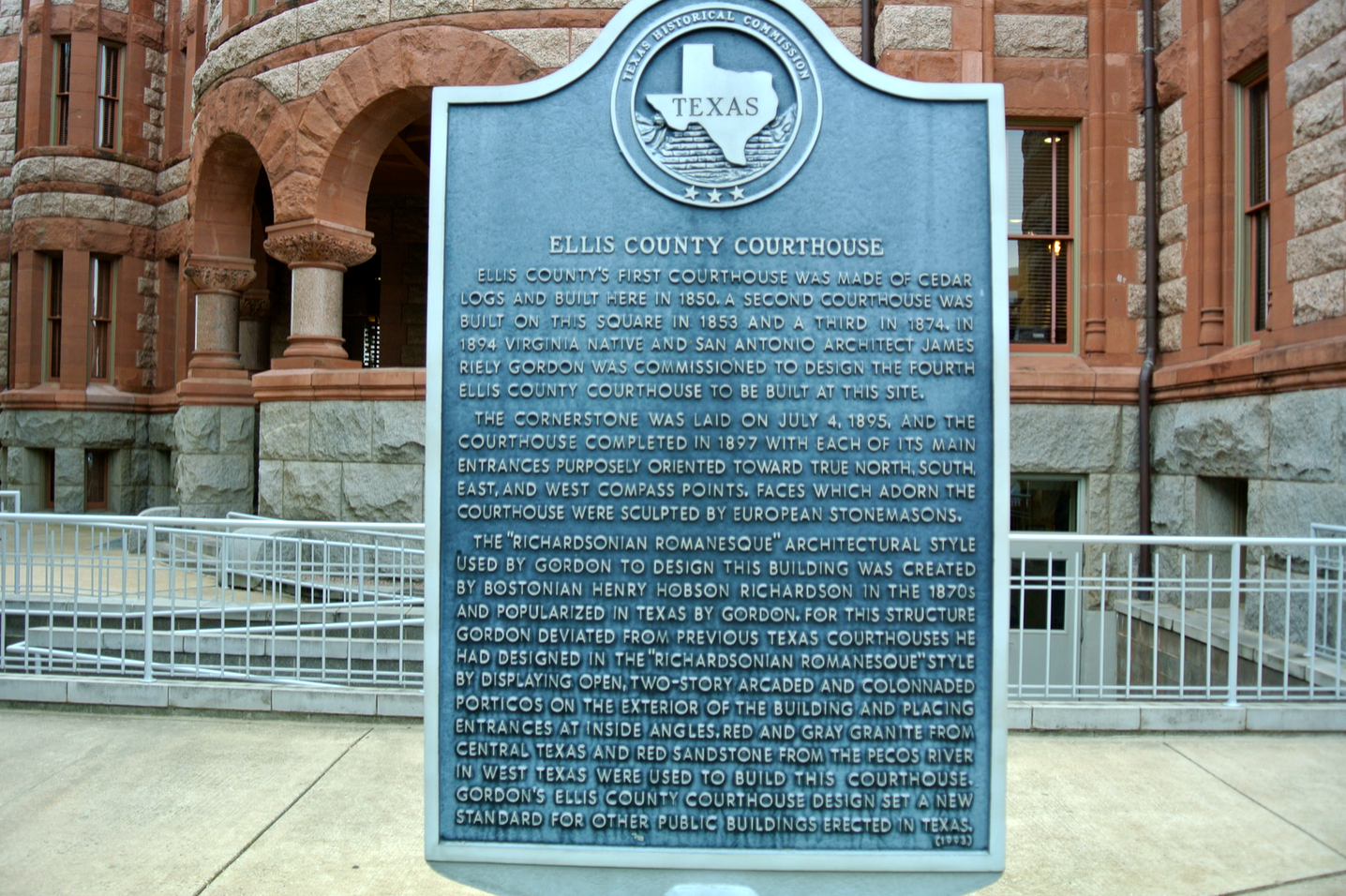 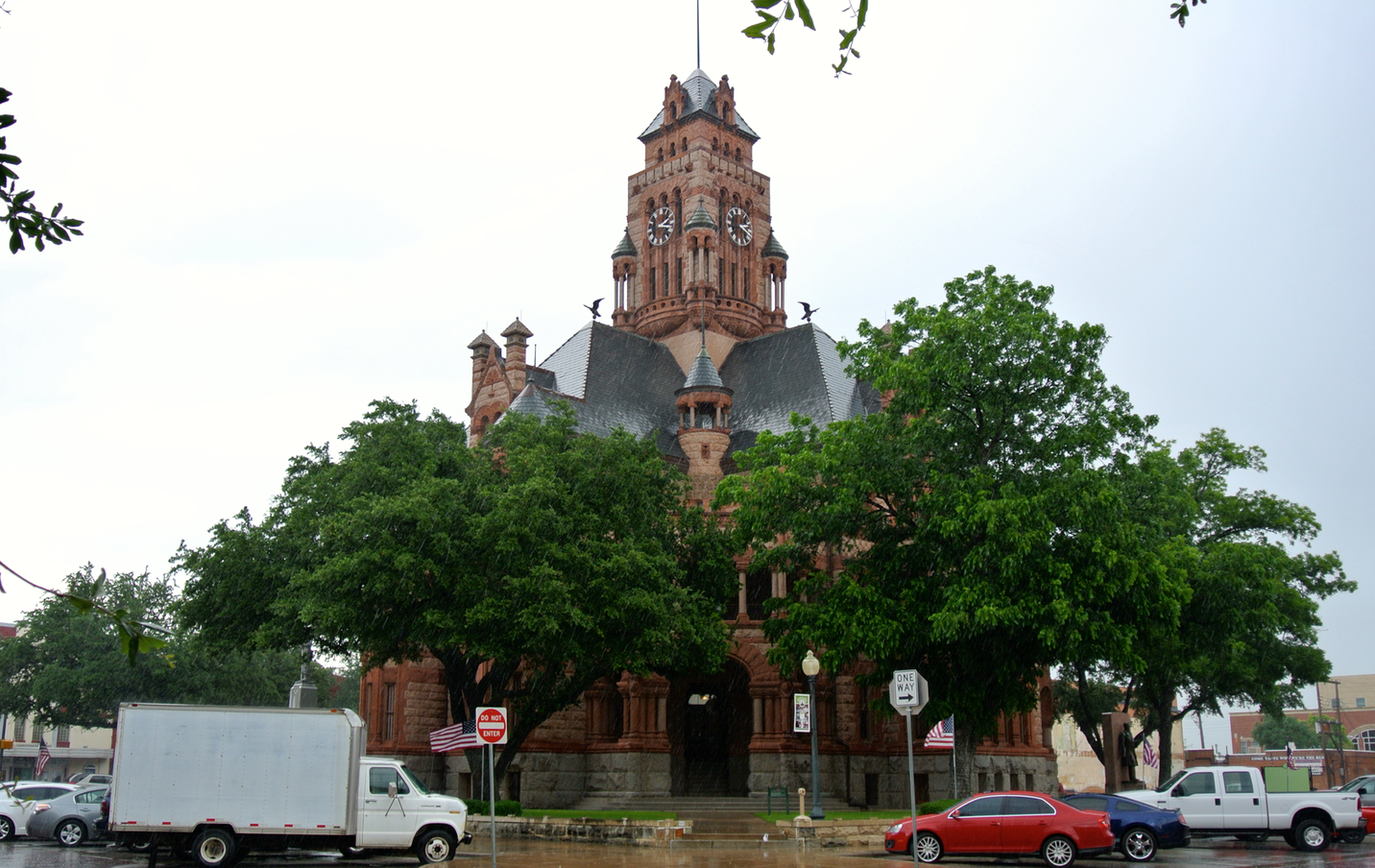 The southwest entrance, at the intersection of Franklin & Rogers Streets 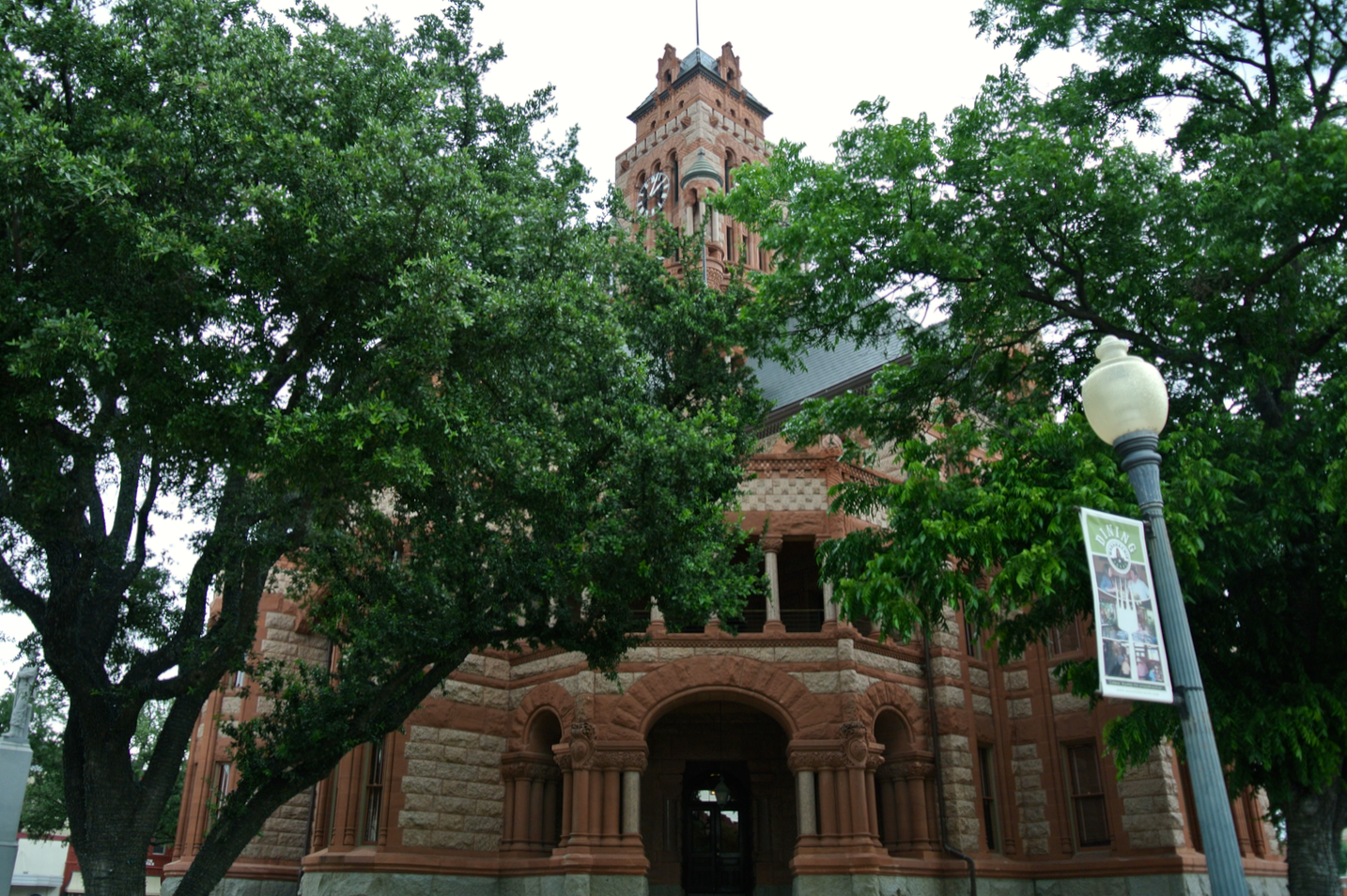 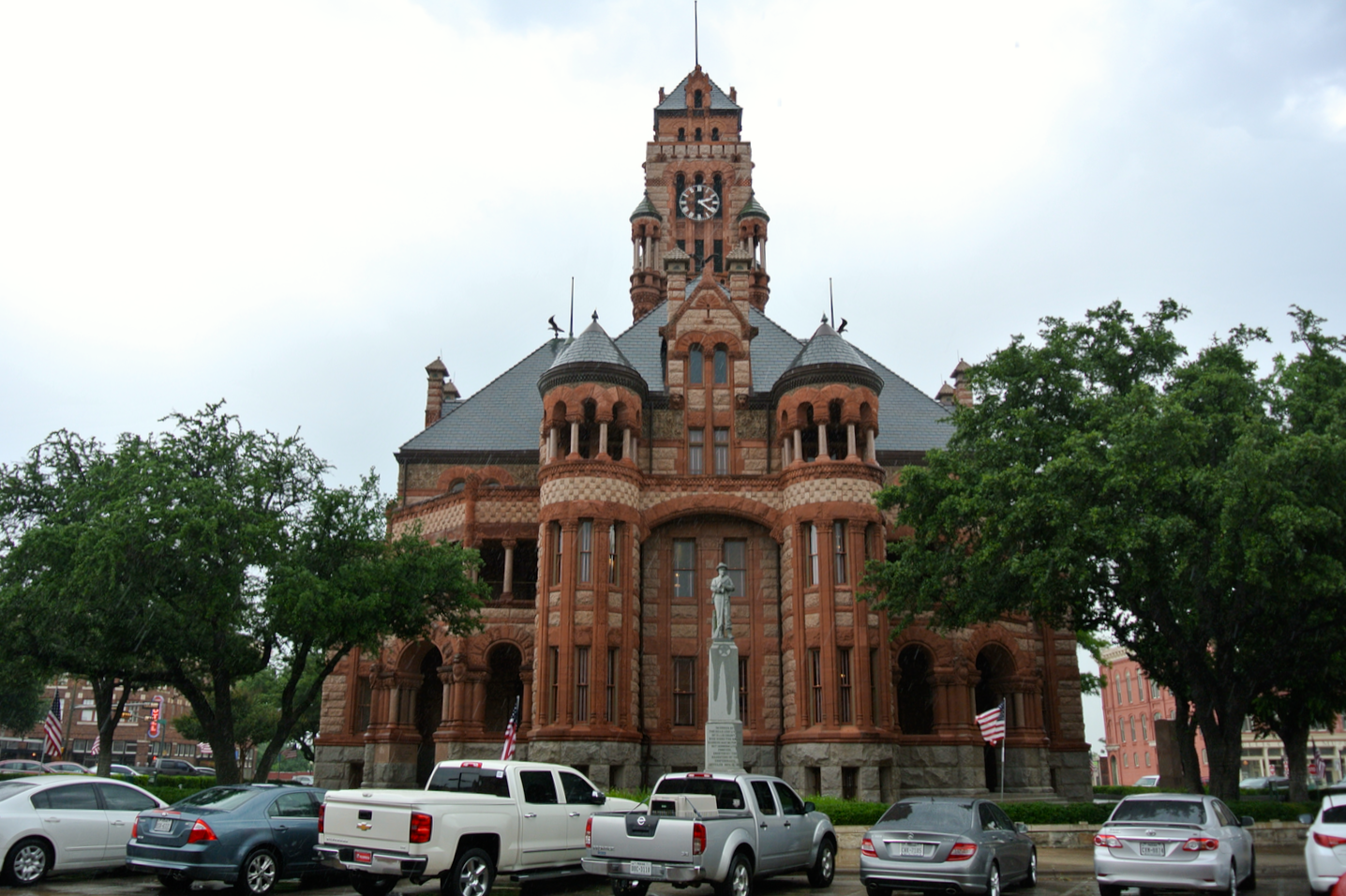 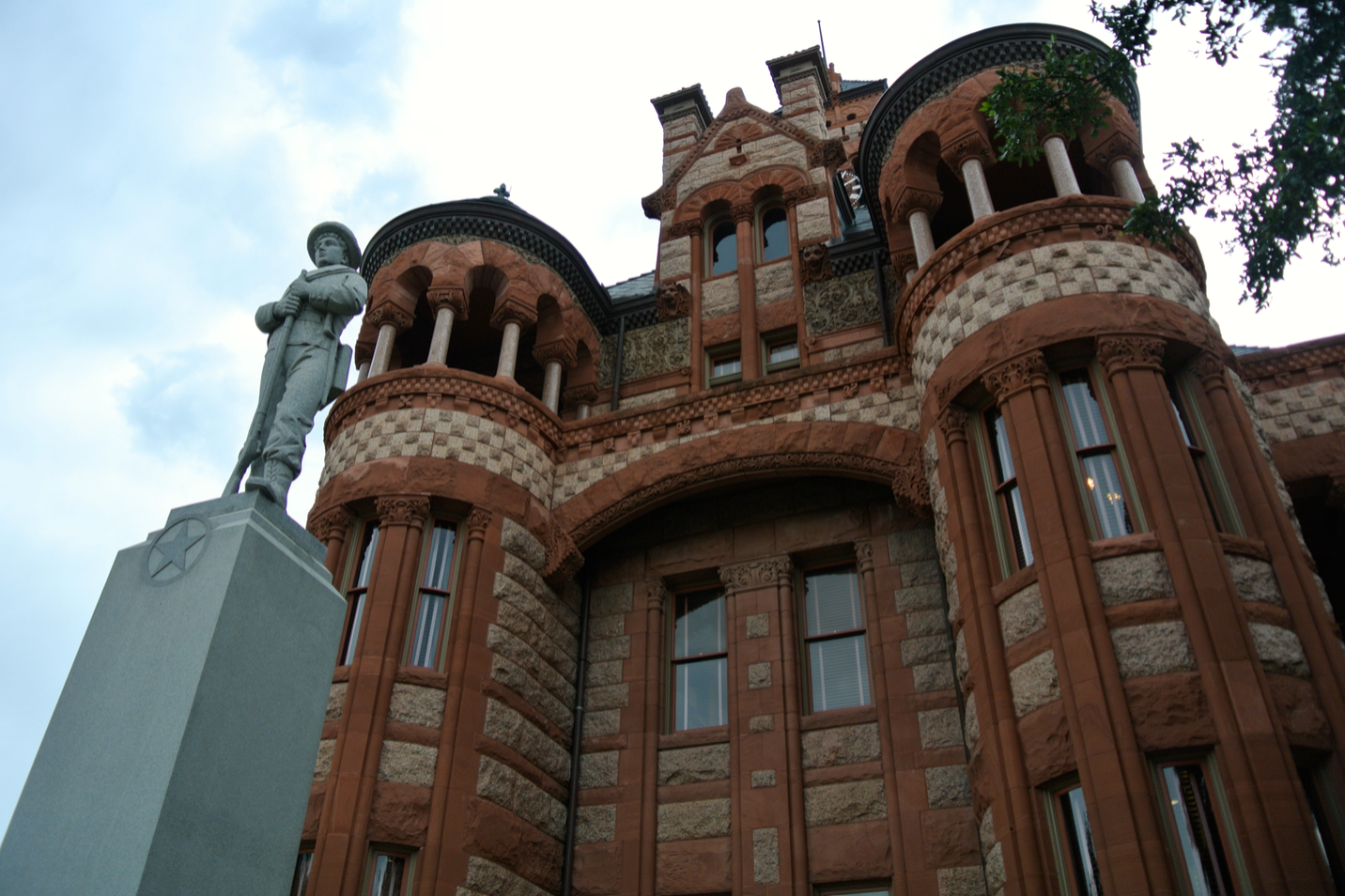 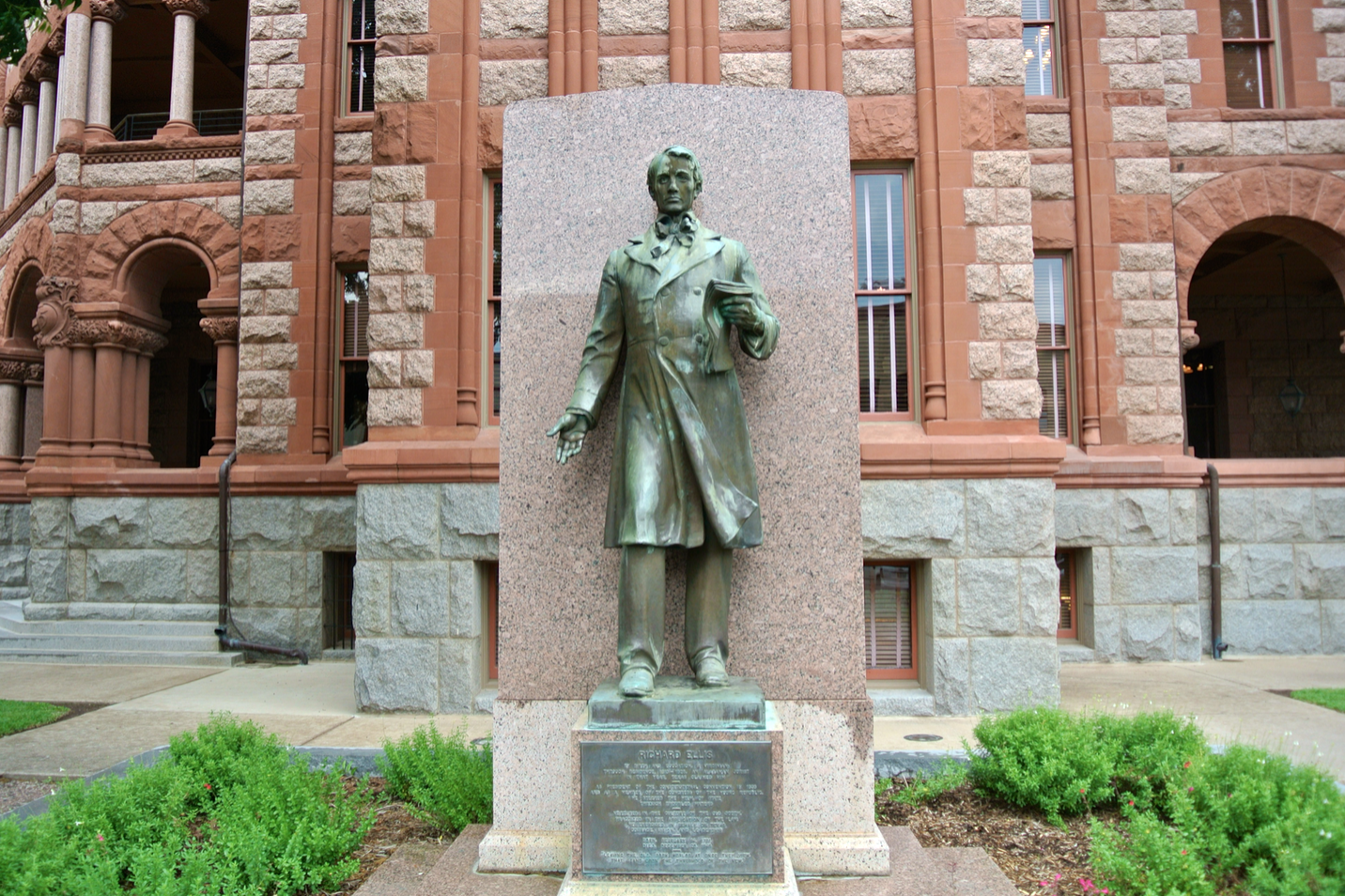 Richard Ellis, namesake of the county 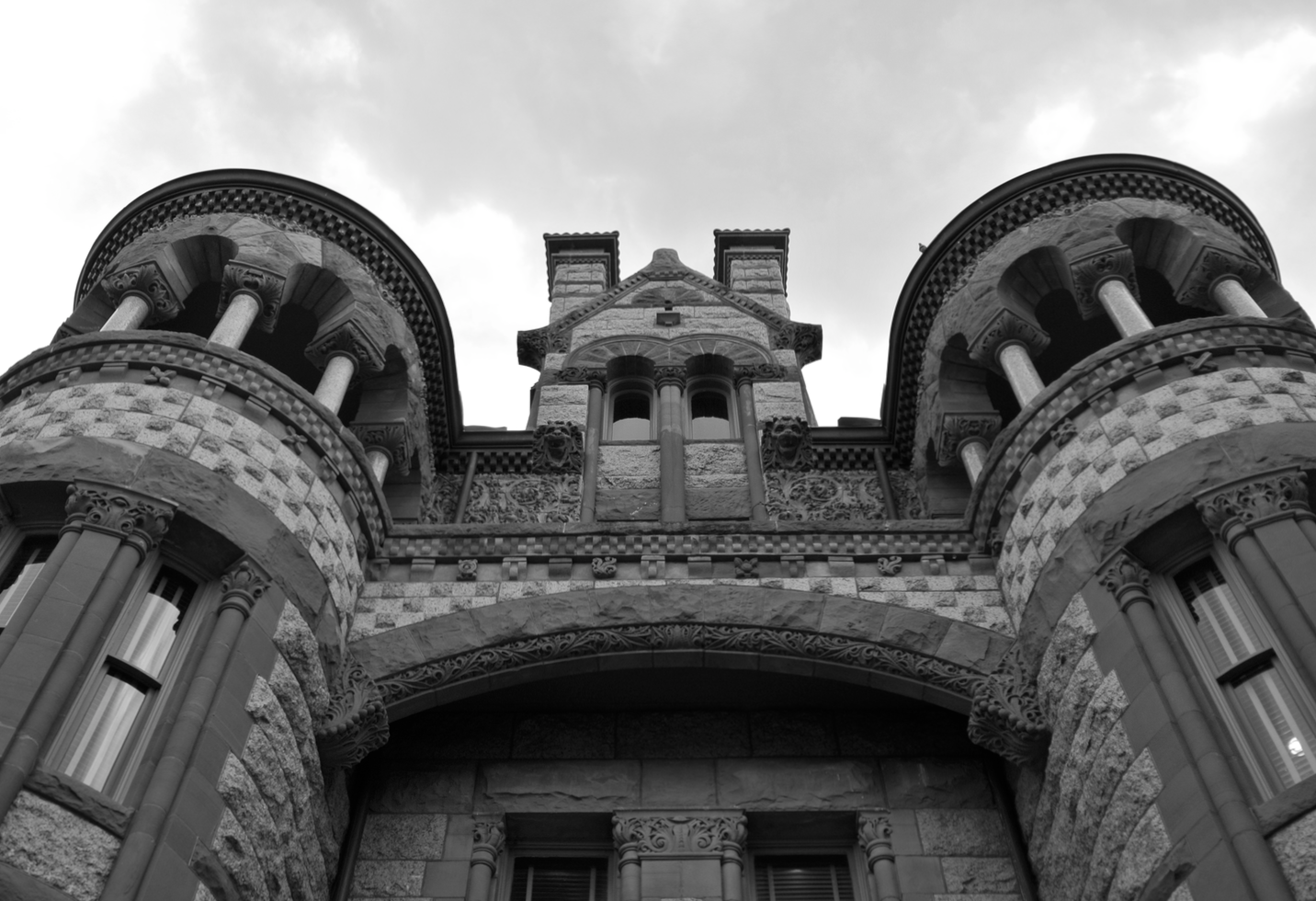 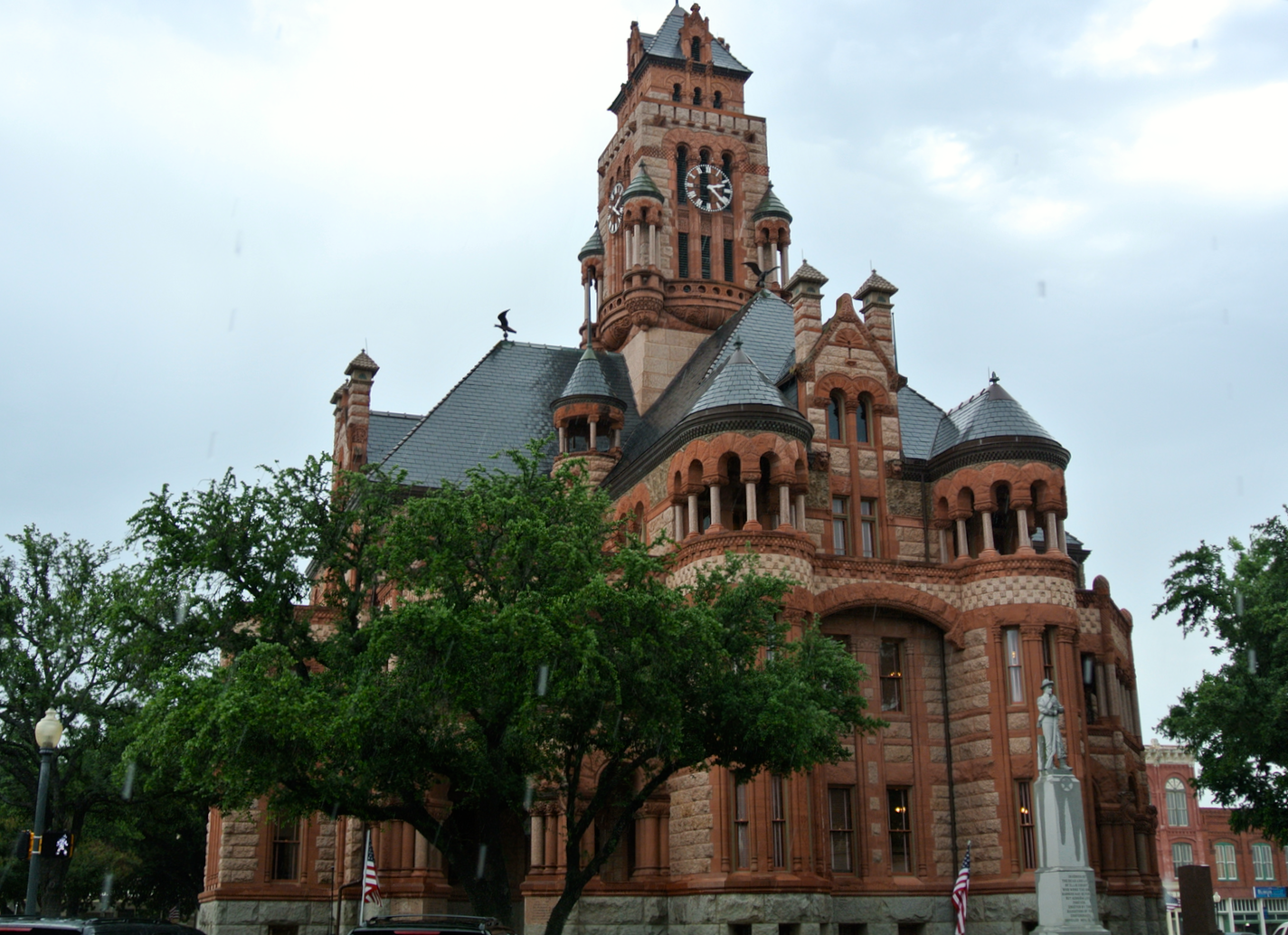 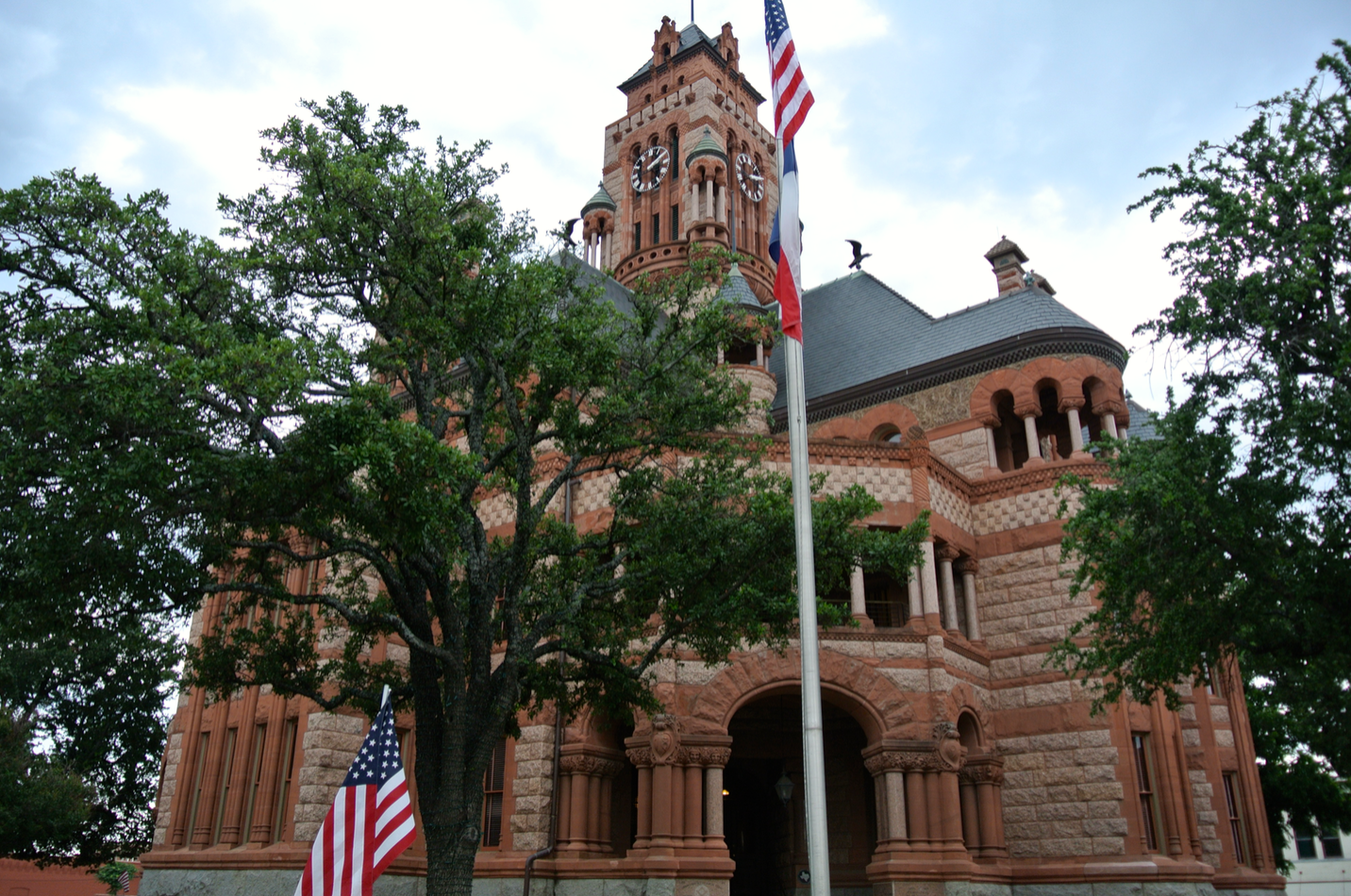 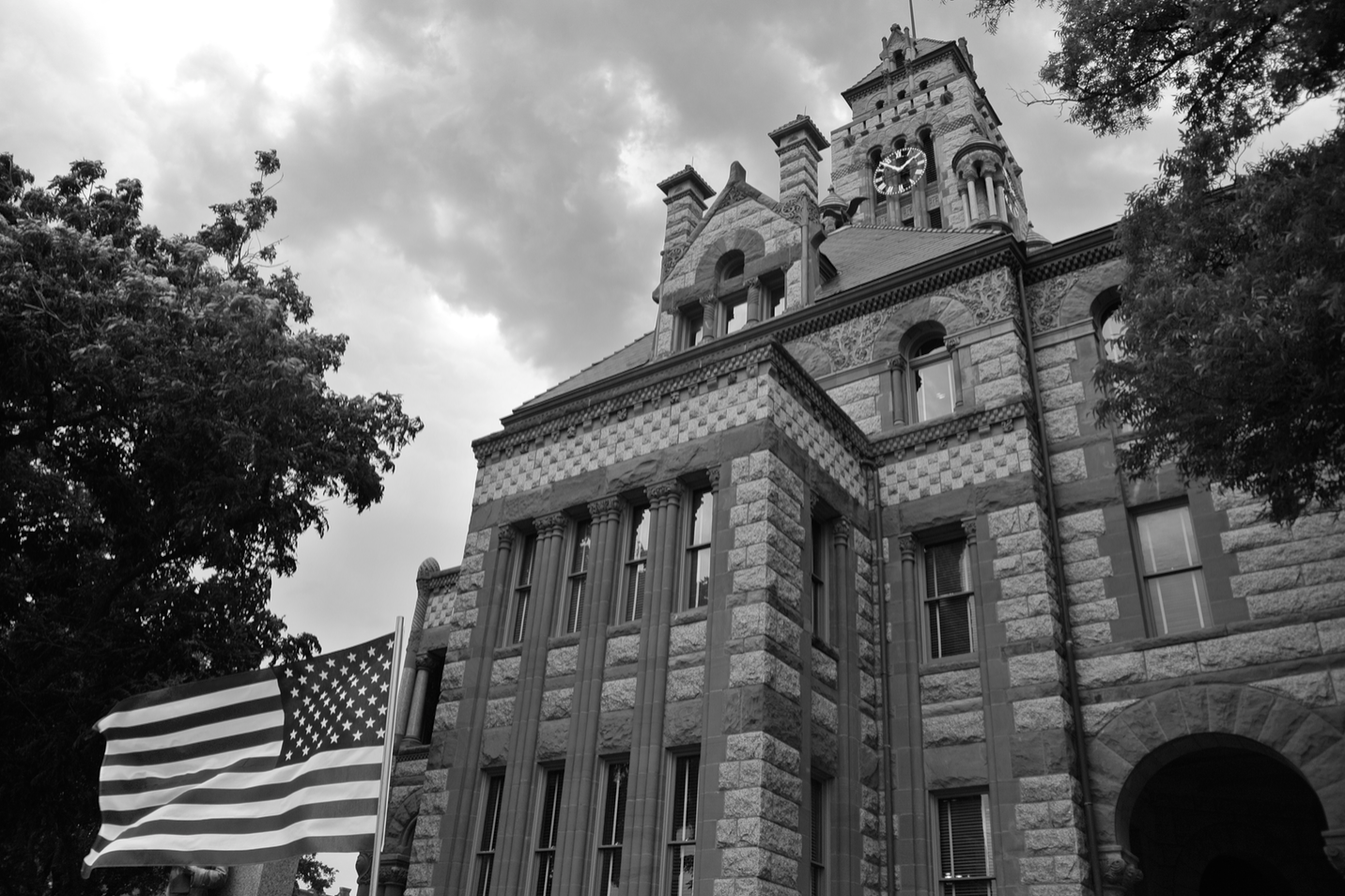 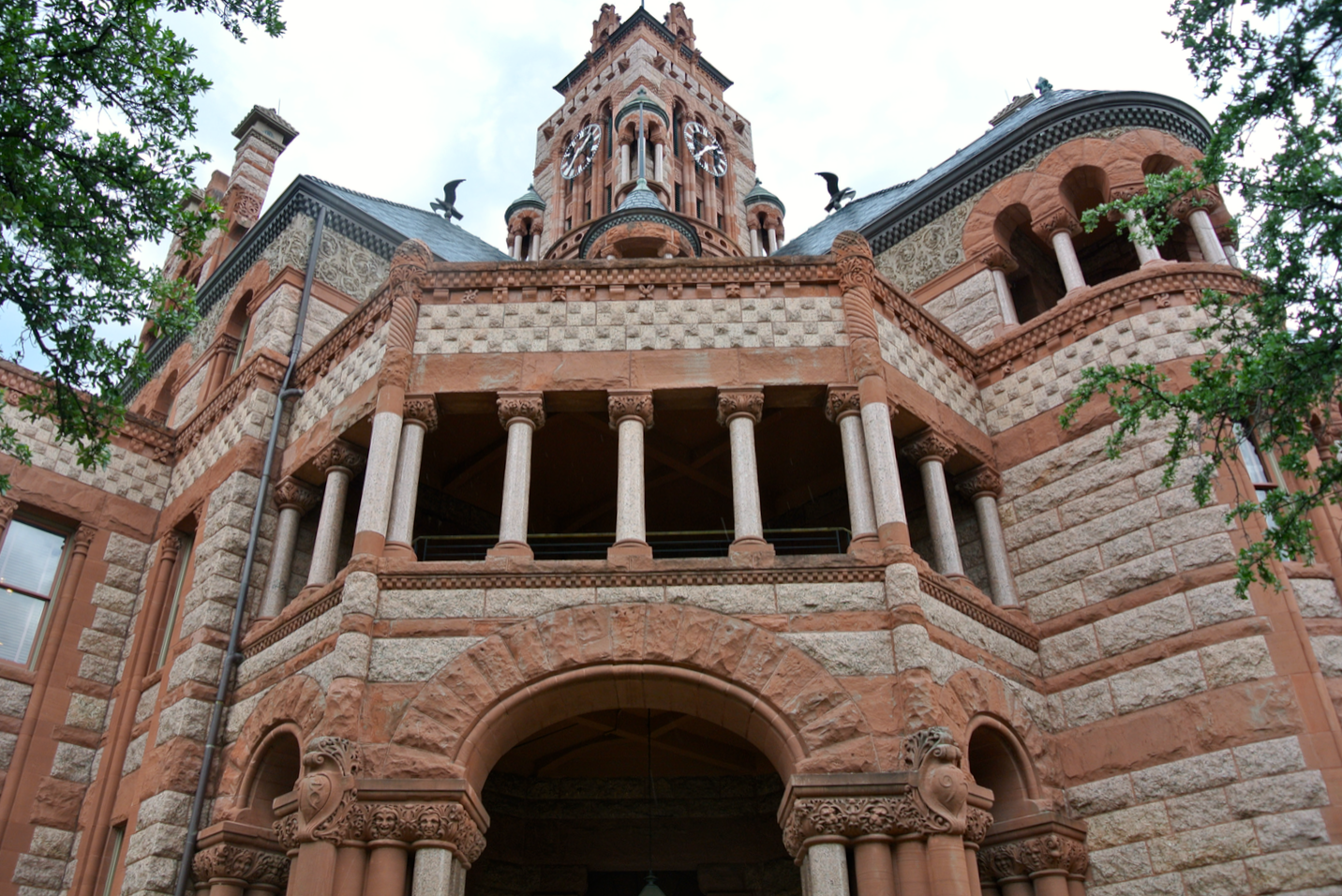 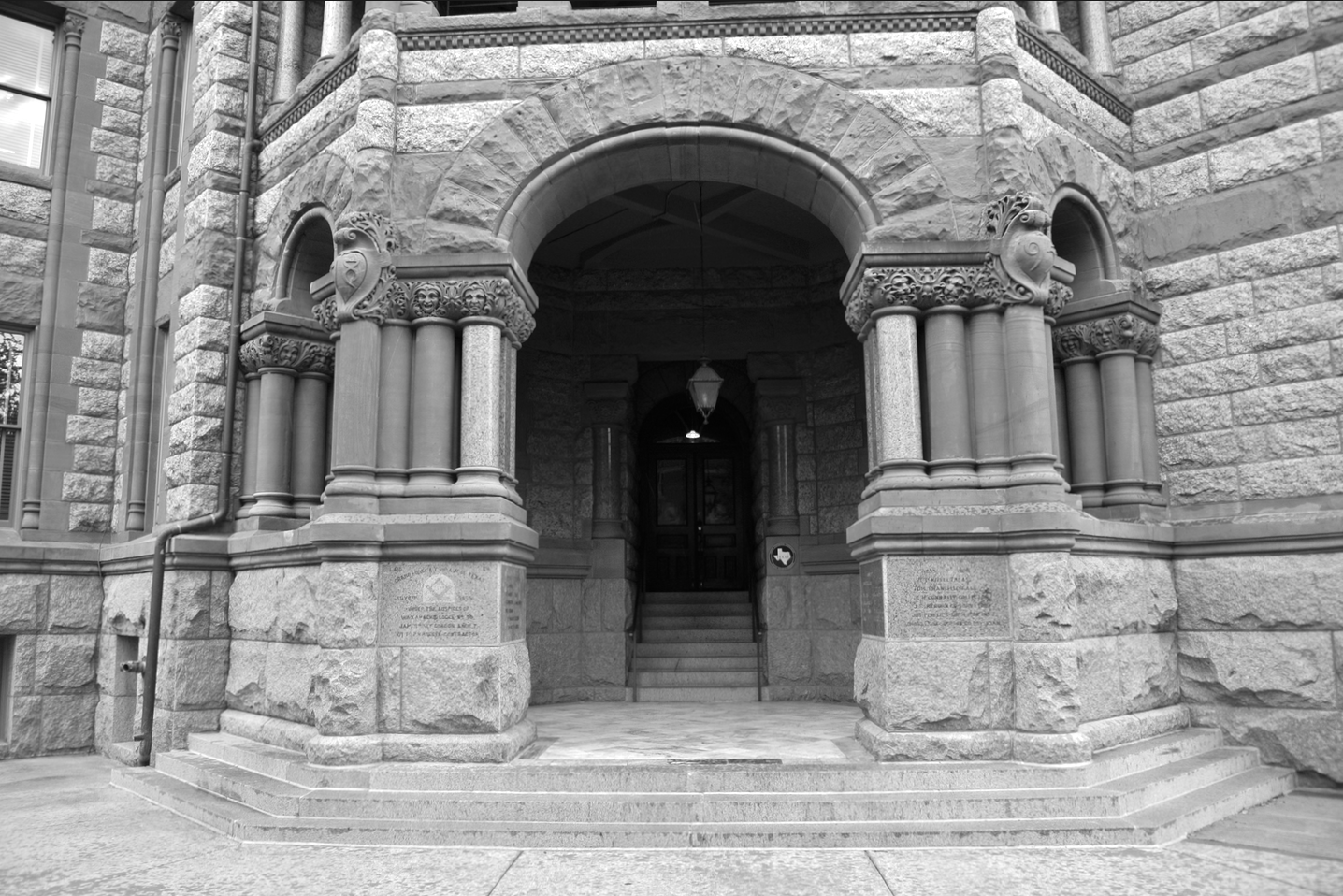 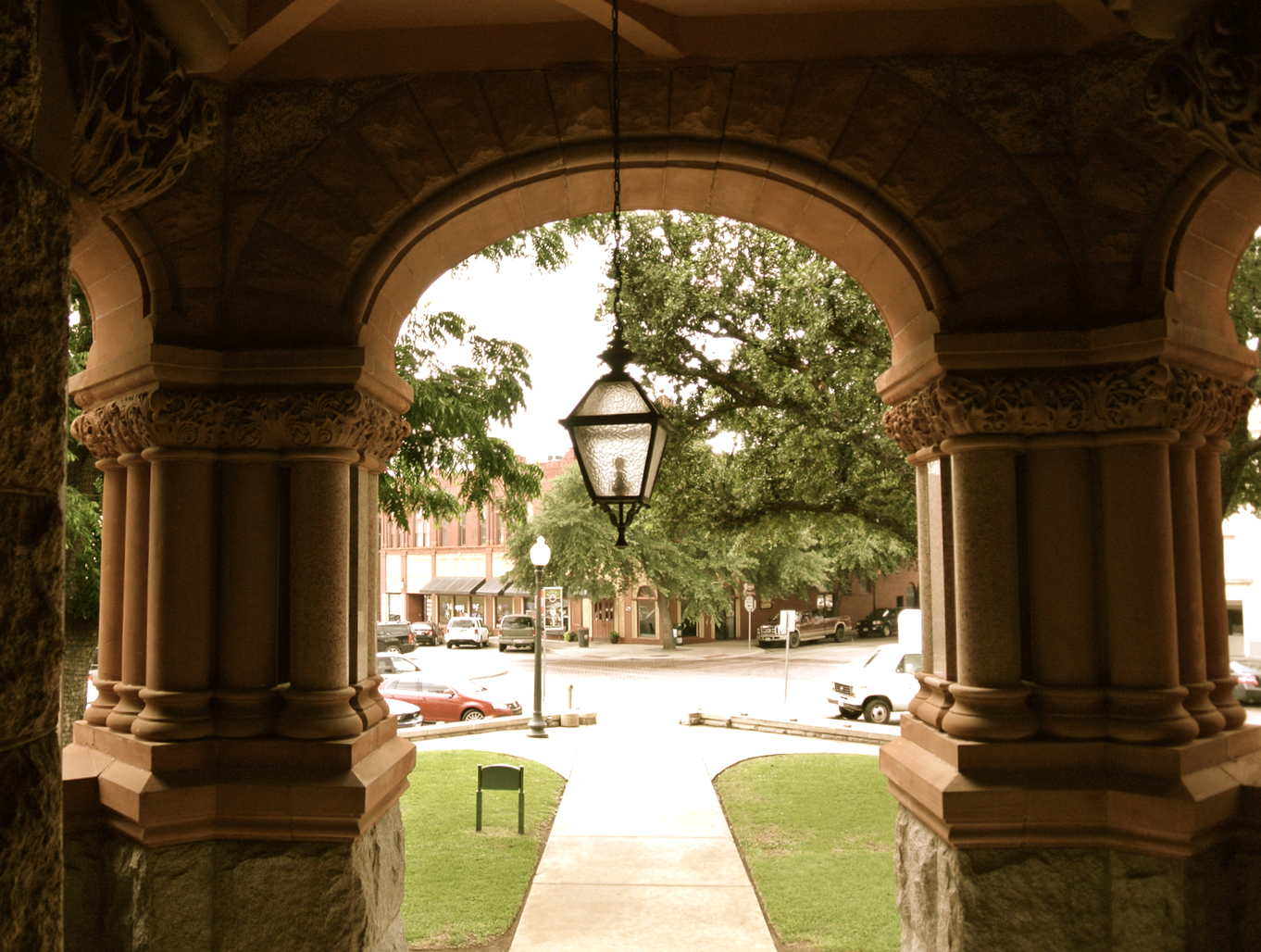 It looks out on the intersection of Rogers and Main. 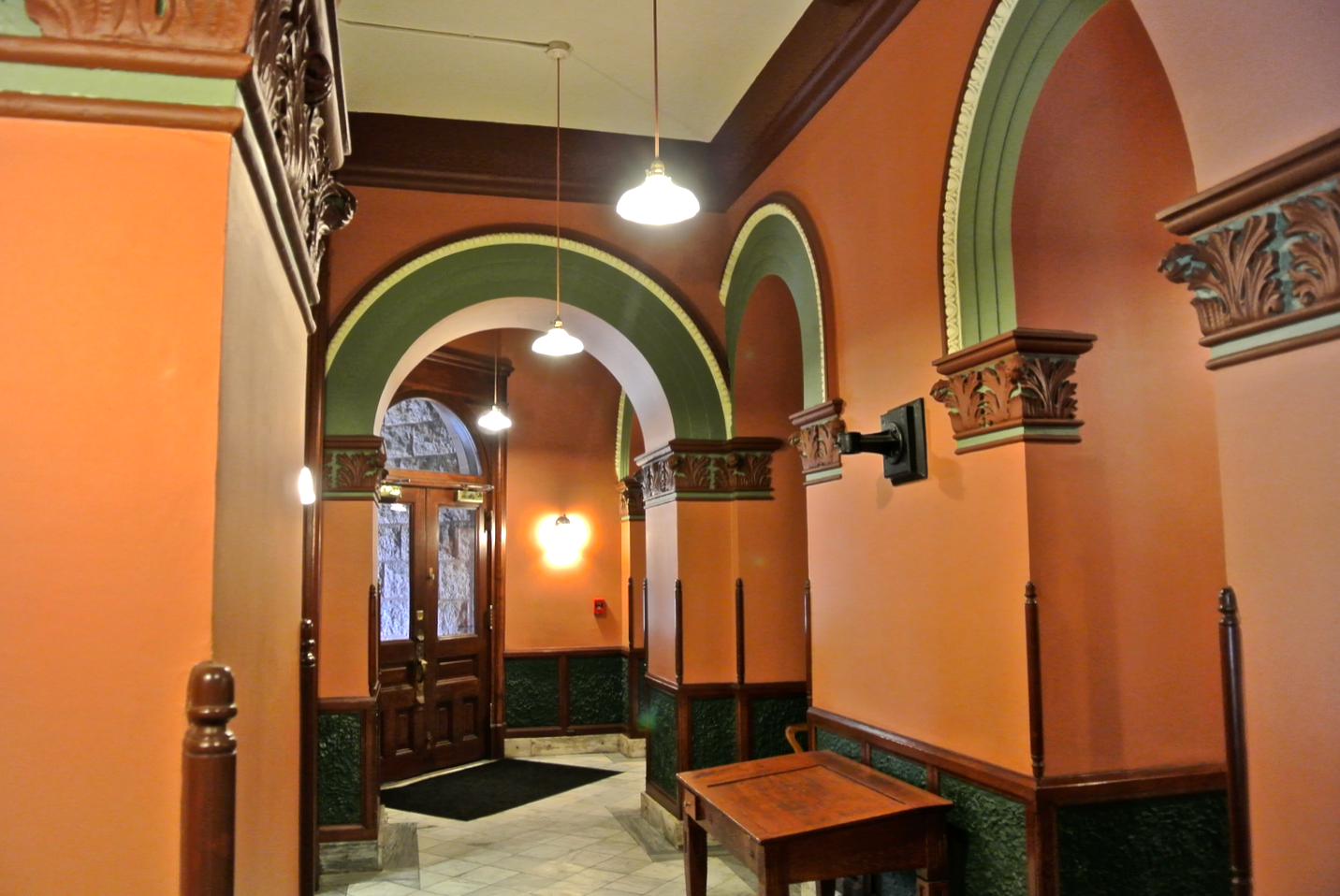 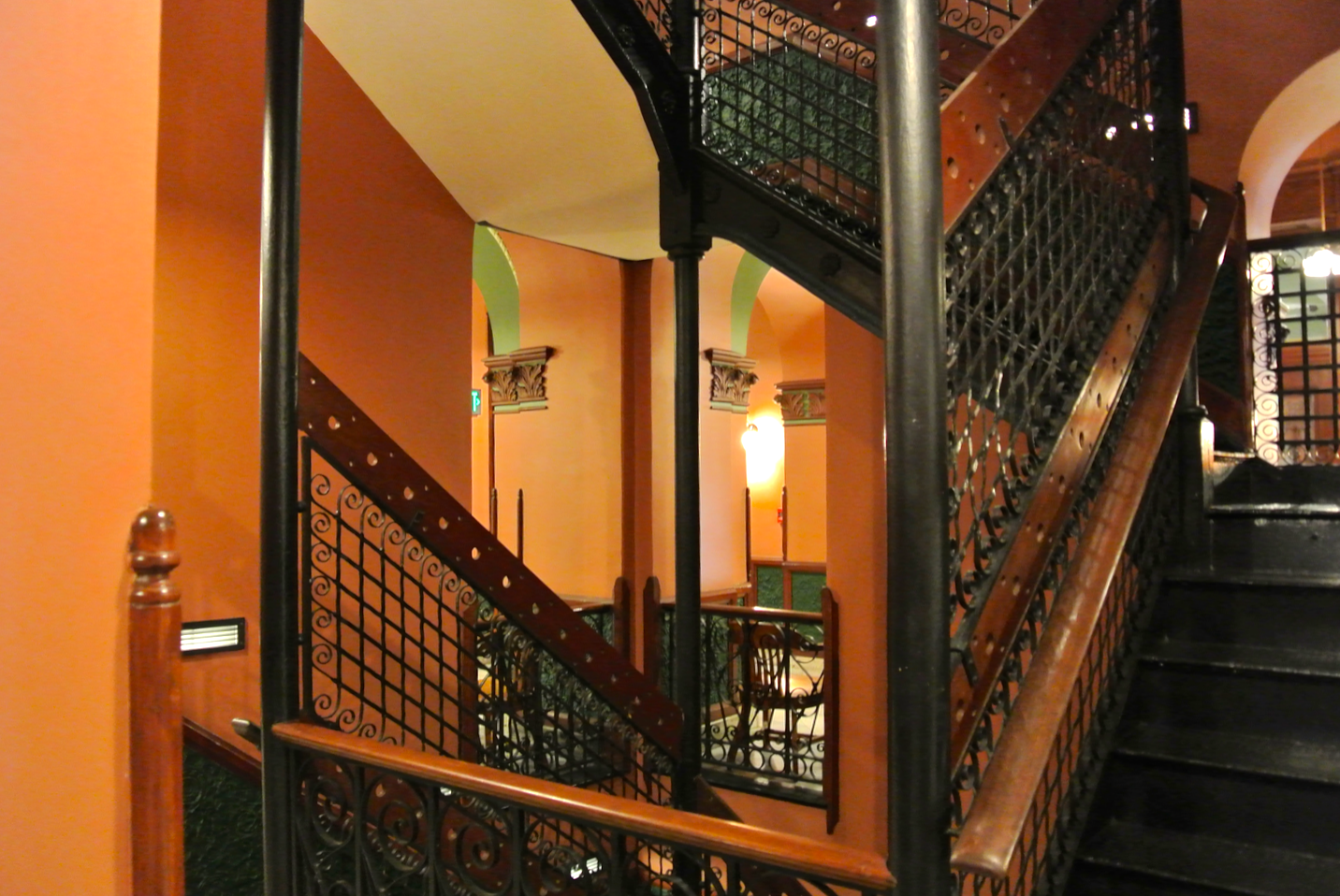 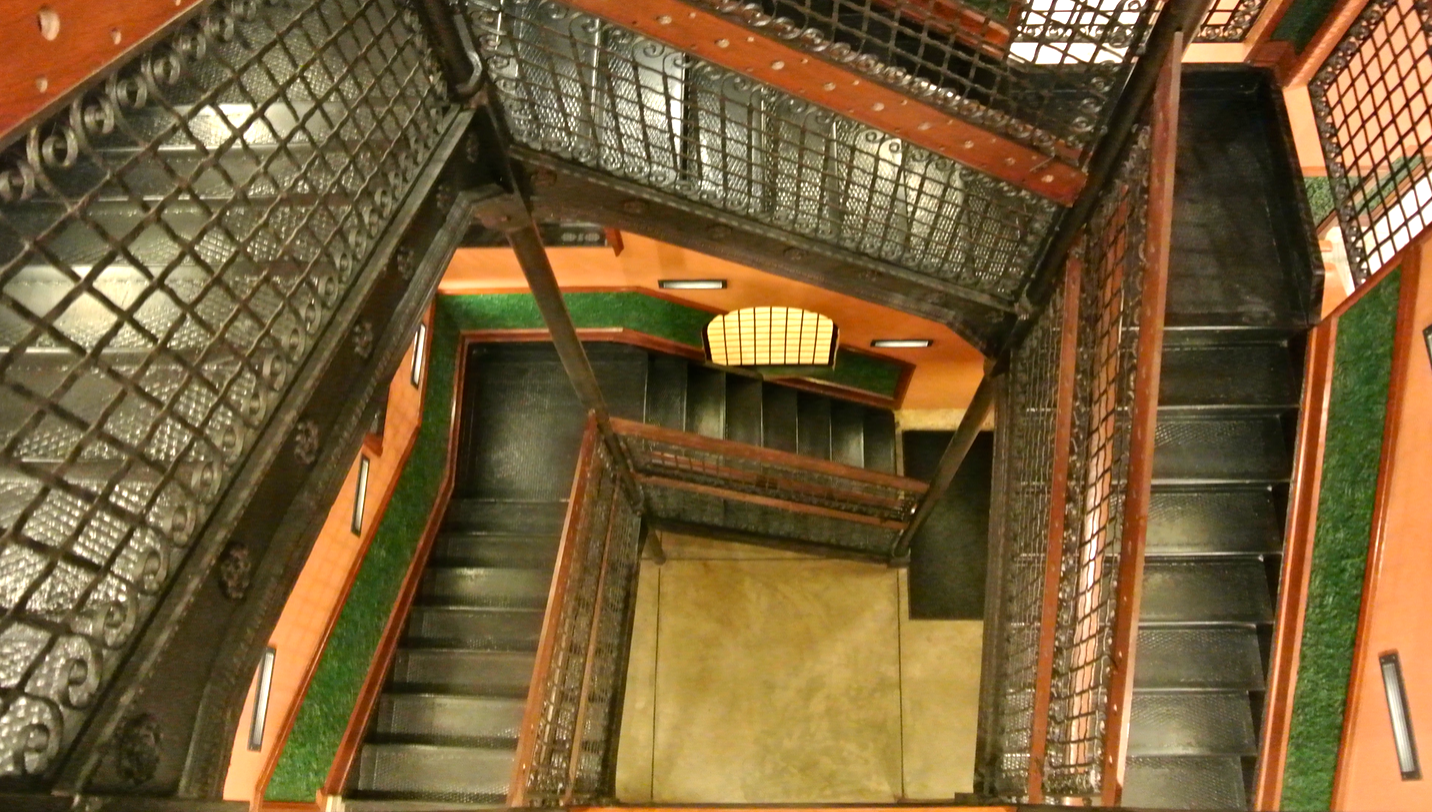 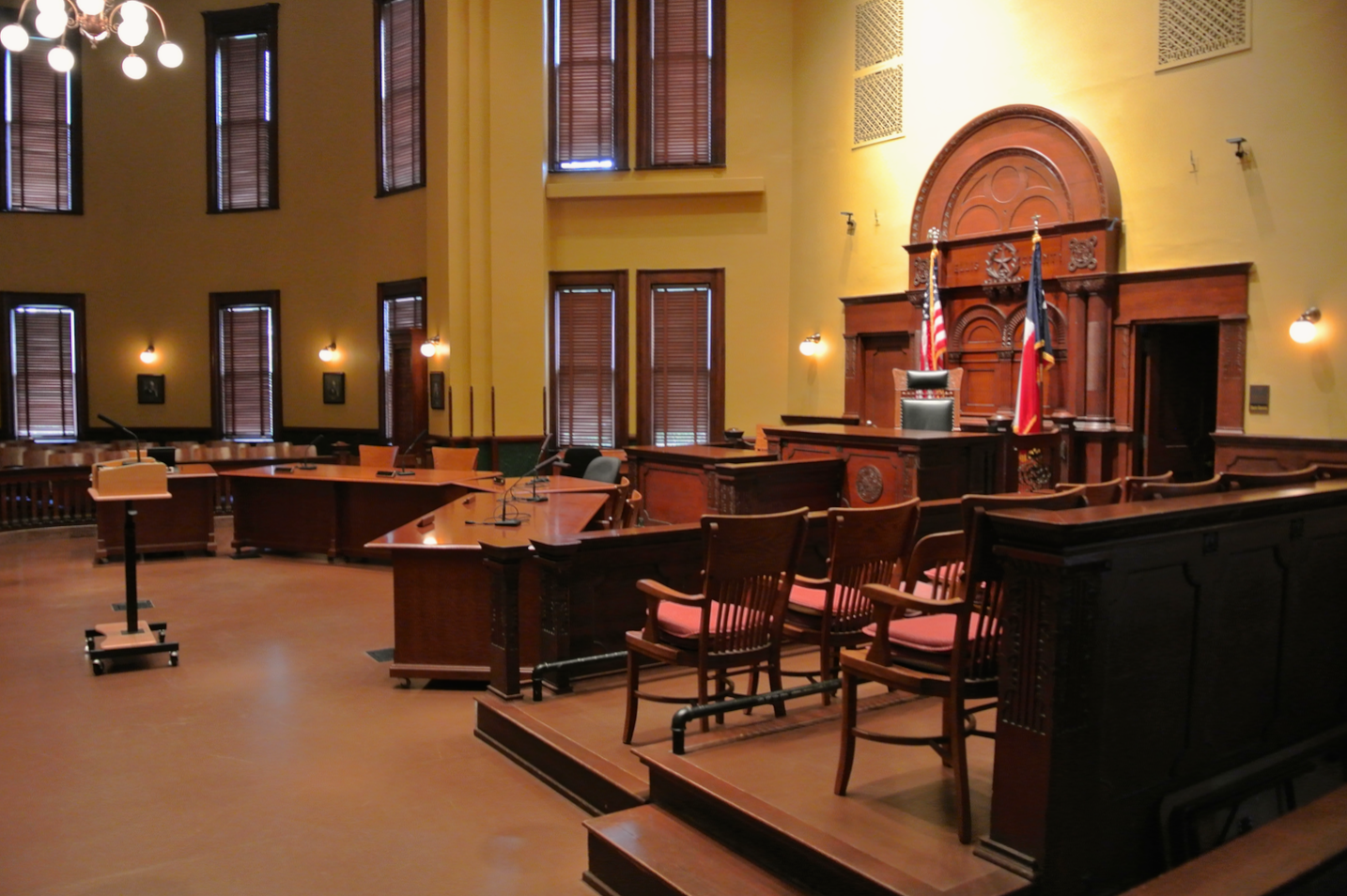 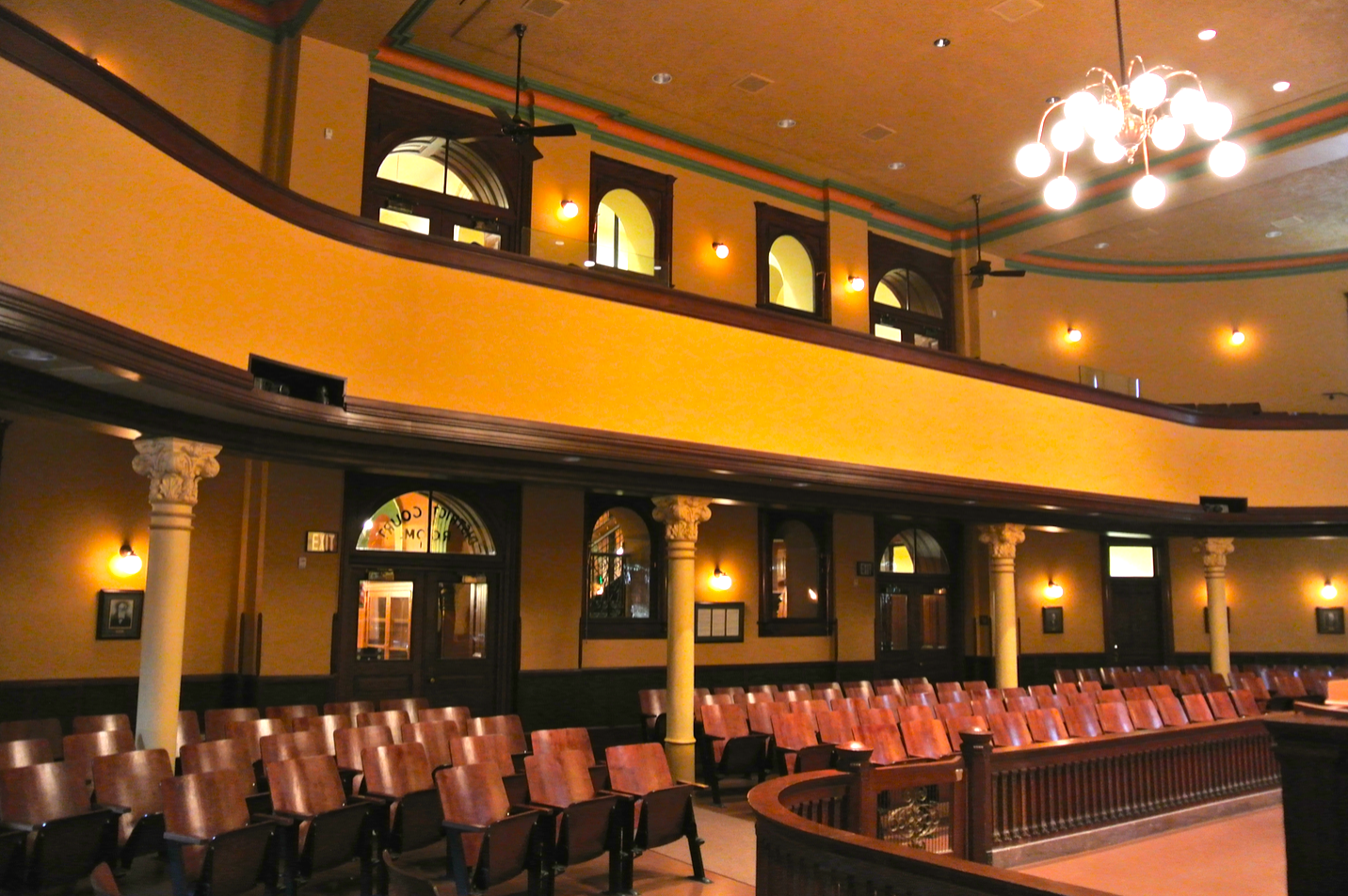 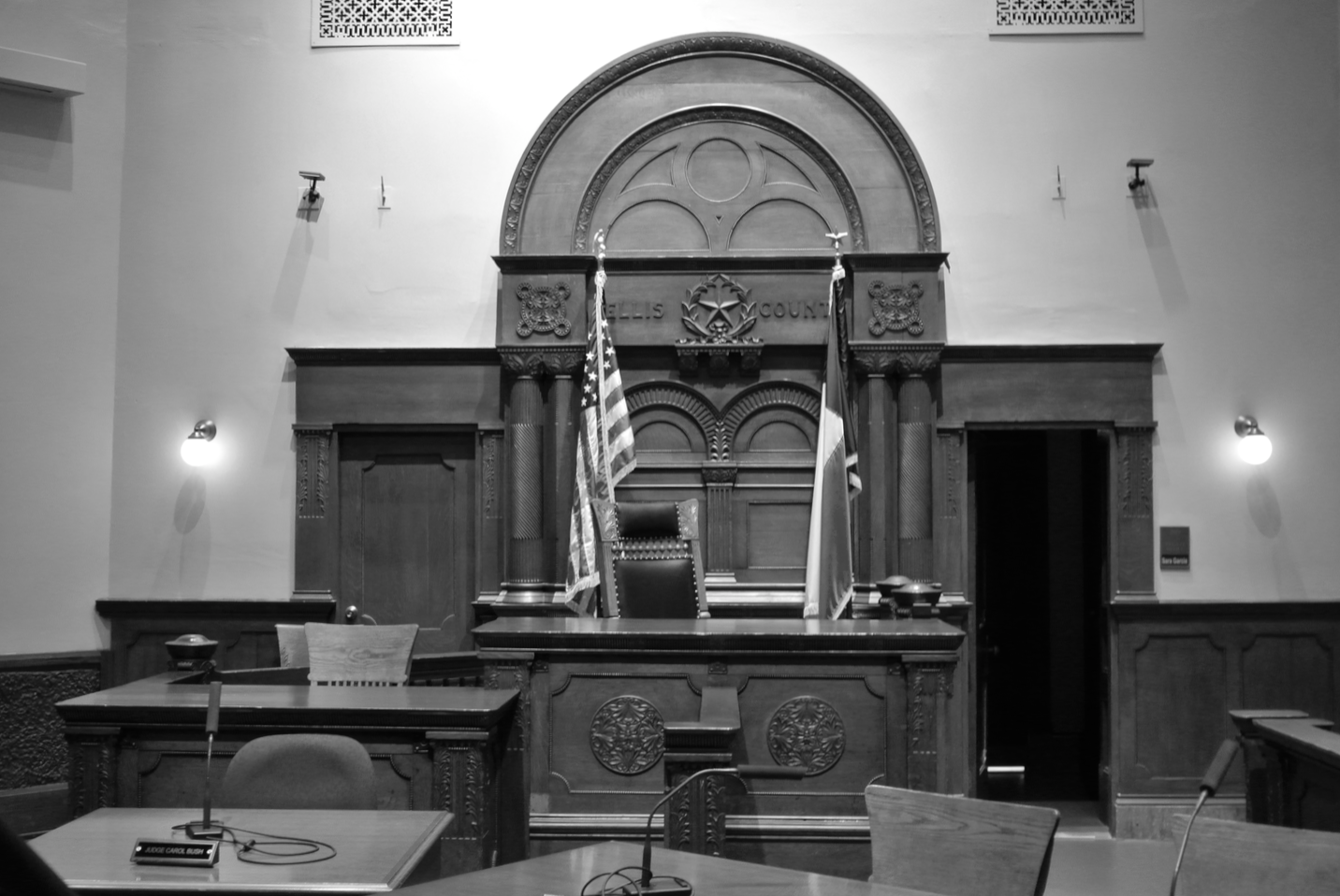 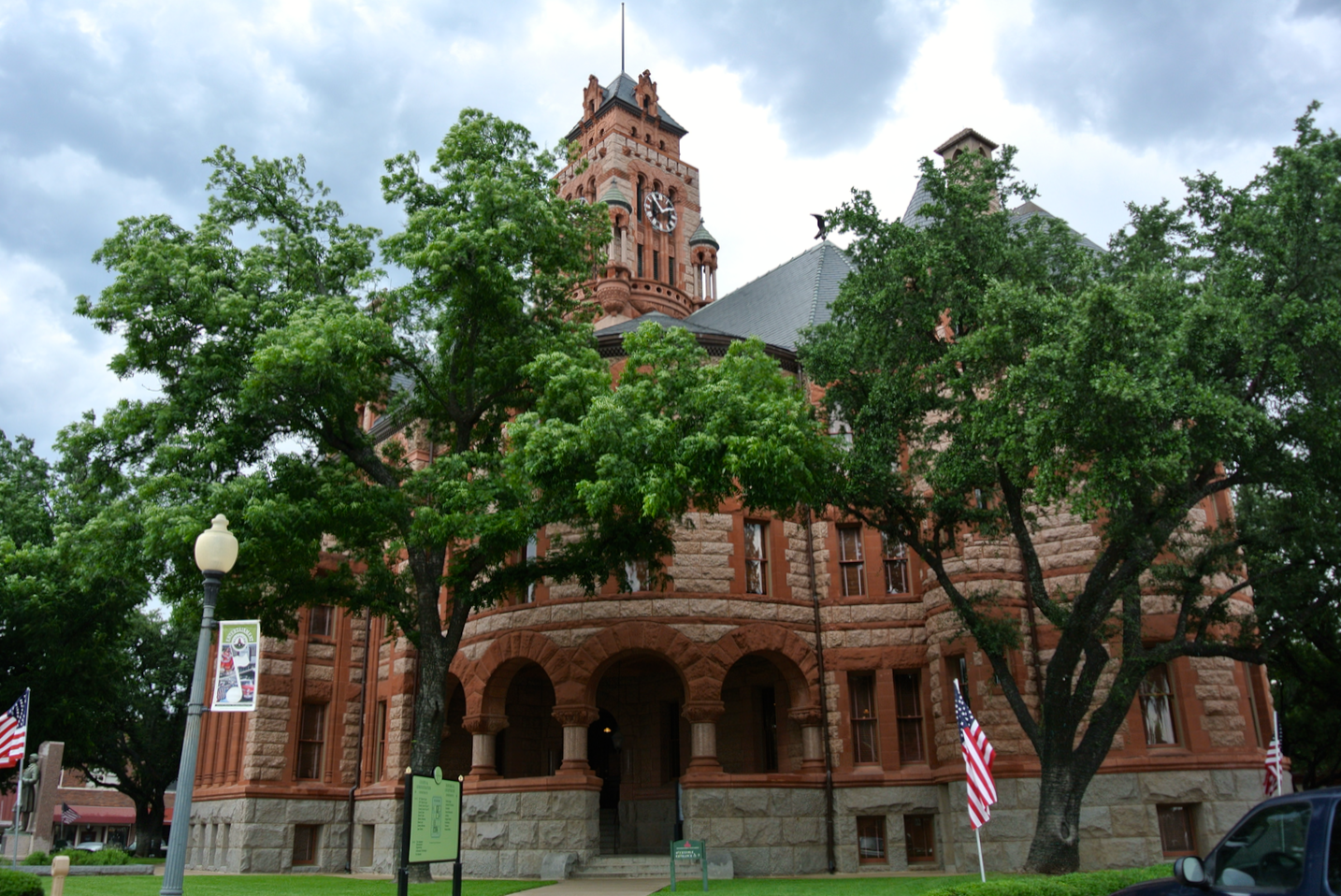 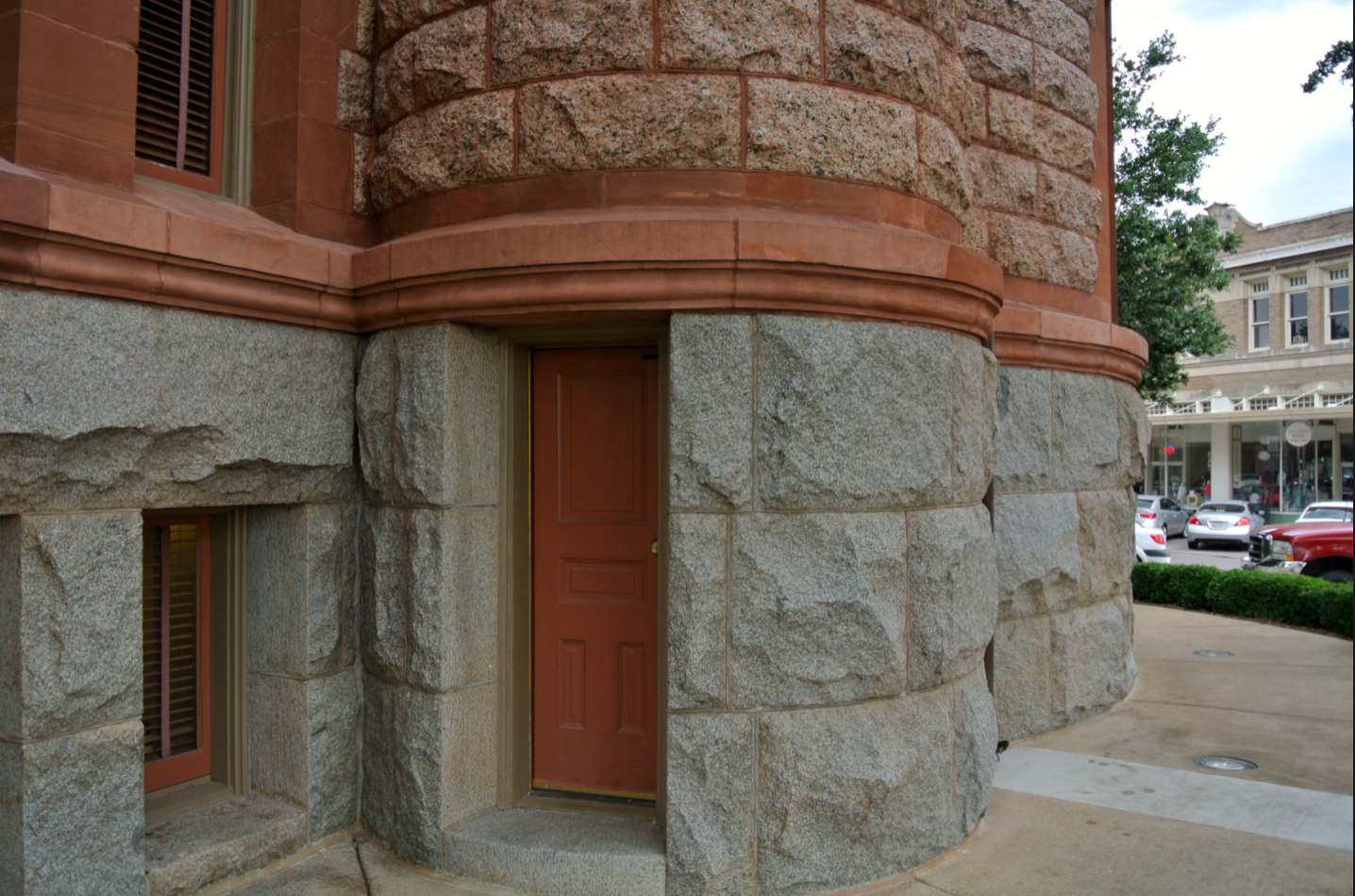 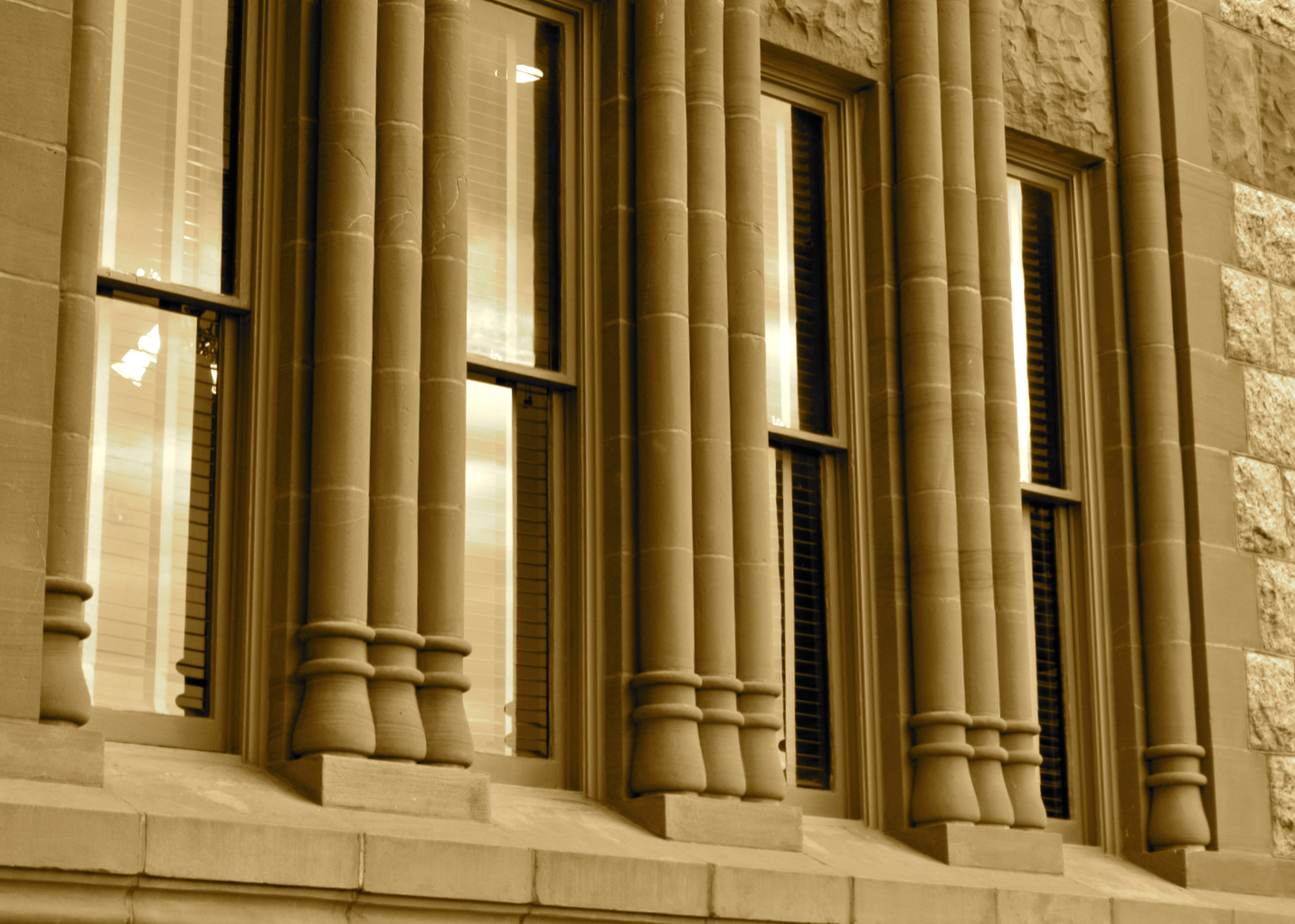 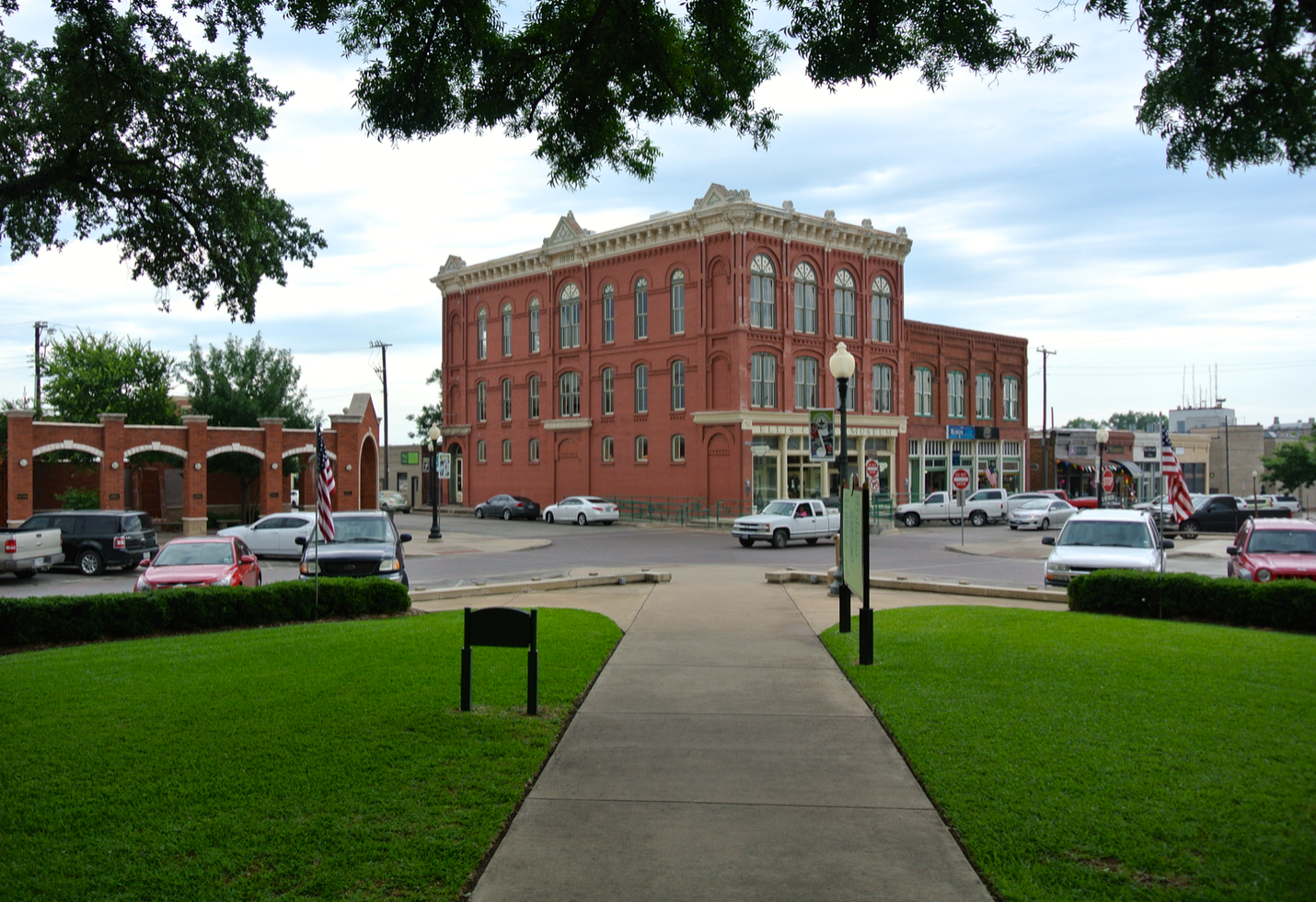 The view from the southeast entrance