“Falls County covers 765 square miles in the Blackland Prairie region. The gently rolling terrain consists of broad flatlands, with elevations ranging from 300 to 500 feet, and the Brazos River bisects the county.”

“The falls of the Brazos River have long been an important fording and camping area for Indians and white settlers. The first Americans in the area were sent in 1819 by Dr. James Long to establish a trading house. Because of problems with the Mexican government they did not stay long. In 1825 the area was included in the empresario grant to Robert Leftwich of the Texas Association, a group from Nashville, Tennessee, which sought permission from the Mexican government to settle in Texas.”

“Until 1829 the falls area did not have a permanent Indian settlement but served as hunting grounds for several tribes, including Wacos, Tawakonis, and Anadarkos, who were often attacked from the north by the stronger Comanches. The Cherokees arrived in the early 1830s, after the other Indians had been weakened by internal wars in 1829–30. The Cherokees were alone in the area until 1834–35, when Sterling C. Robertson began bringing American settlers to his Nashville colony (later called Robertson’s colony). Although it was illegal under new laws passed by the Mexican government, nine families had settled in the area by 1830.”

“In 1833 Robertson established the capital of his Nashville colony and called it Sarahville de Viesca. At this time problems with the Indians were exacerbated by clashes with the Mexicans, and in 1835 the settlers prepared for war with Mexico. The change of name from Fort Viesca to Fort Milam reflected the shift away from Mexico. In early 1836 all the settlers fled during the Runaway Scrape, giving Viesca the name of “the town that died overnight.” After the battle of San Jacinto families returned to the area, but Fort Milam never reached its former importance except as the head of the Brazos military operations against the Indians.”

“On January 28, 1850, the state legislature formed Falls County from Limestone and Milam counties. The falls of the Brazos gave the county its name. Since Falls County was established its boundaries have not changed. The legislature stipulated that Viesca would be the county seat, but the citizens petitioned for another location because most of the residents lived east of the Brazos River. The citizens voted 20–0 in favor of Adams, which officially became the county seat on January 30, 1851. Soon after, the town was renamed Marlin in honor of the Marlin family.”

“Falls County approved secession almost unanimously in 1861. The only dissenters were two prominent slaveholders. Almost 600 men, twice the voting population, fought for the Confederacy, and many lost their lives. Because of the distance from the occupied areas of the Confederacy, many refugees fled to Falls County. Some paused only briefly on their way to Mexico. Between 1860 and 1870 the white population grew from 3,614 to 16,240 while the black population went from 1,716 to 4,681.”

“Transportation in Falls County relied on stagecoach lines and private transportation until the Reconstruction era. Until the middle 1880s cattle were driven up to the Waco area to connect with the Chisholm Trail. The Houston and Texas Central Railroad became the first railroad through the county around 1870. It passed through Marlin and led to the establishment of the towns of Reagan and Perry.”

“The first automobile appeared in the county in 1904. By 1927 the road which eventually became U.S. Highway 77 became a state highway. In 1930 the other major road in the county became State Highway 7. In 1915 an airport shed was built to house three airplanes. Promoters put on an airshow near Marlin, but it was closed one year later when a female pilot was killed in a crash. Marlin was the largest town, with a population of 4,000, just over 10 percent of the county’s total population.”

“The years of the Great Depression and World War II brought about significant changes in Falls County. The population dropped by 8 percent, the first decline since the formation of the county. The ratio of blacks to whites remained the same. The depression caused a 64 percent drop in the number of farms, and the value of the farms dropped 55 percent.”

“The decrease in farms continued until there were only 1,117 in 1982. Cotton became insignificant and corn returned almost to its predepression level, but wheat and grain sorghum became major crops, each with over a million bushels.”

“The mineral water in Marlin remained an important industry. Manufacturing went from 8 percent of employment in 1965 to 19 percent in 1986. Retail trade remained at around 35 percent and services around 29 percent during the same time period.”

I was the guest of Falls County and Marlin on December 29, 2010 and returned to rephotograph the courthouse on May 4, 2014. 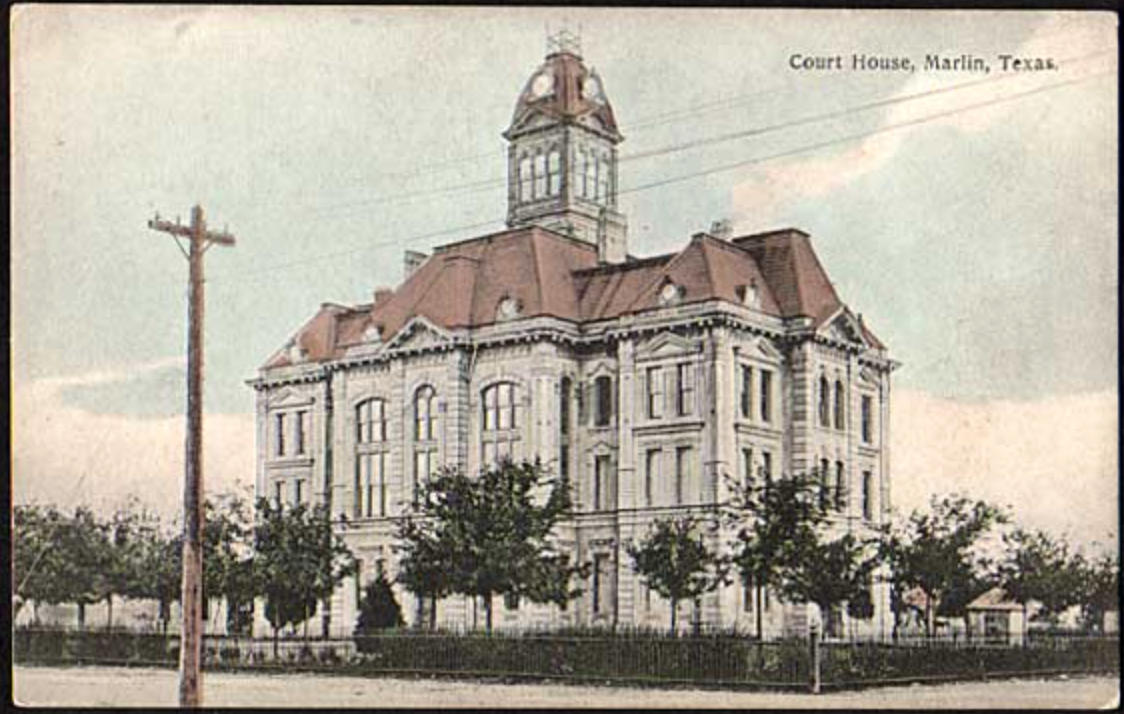 This was the work of Eugene T. Heiner, done in the Romanesque Revival style. It also included influences from the Second Empire school of architecture.

The Texas Historical Commission details it as such:

“Richly detailed walls in high Italianate style were crowned by complex mansard roofs. The center pavilions, which announcd the entranced, were surmounted by triangular pediments and semicircular and stilted arches with geometrical ornamental features. The corner pavilions contained openings spanned by pediments with designs that were varied on each story. Flat arches with archivolts returning part way down the sides were at the ground level. Masonry work included quoining with stones of different textures and pilasters with geometrical ornament.”

This no longer exists. Presumably, it was demolished to build the current one. 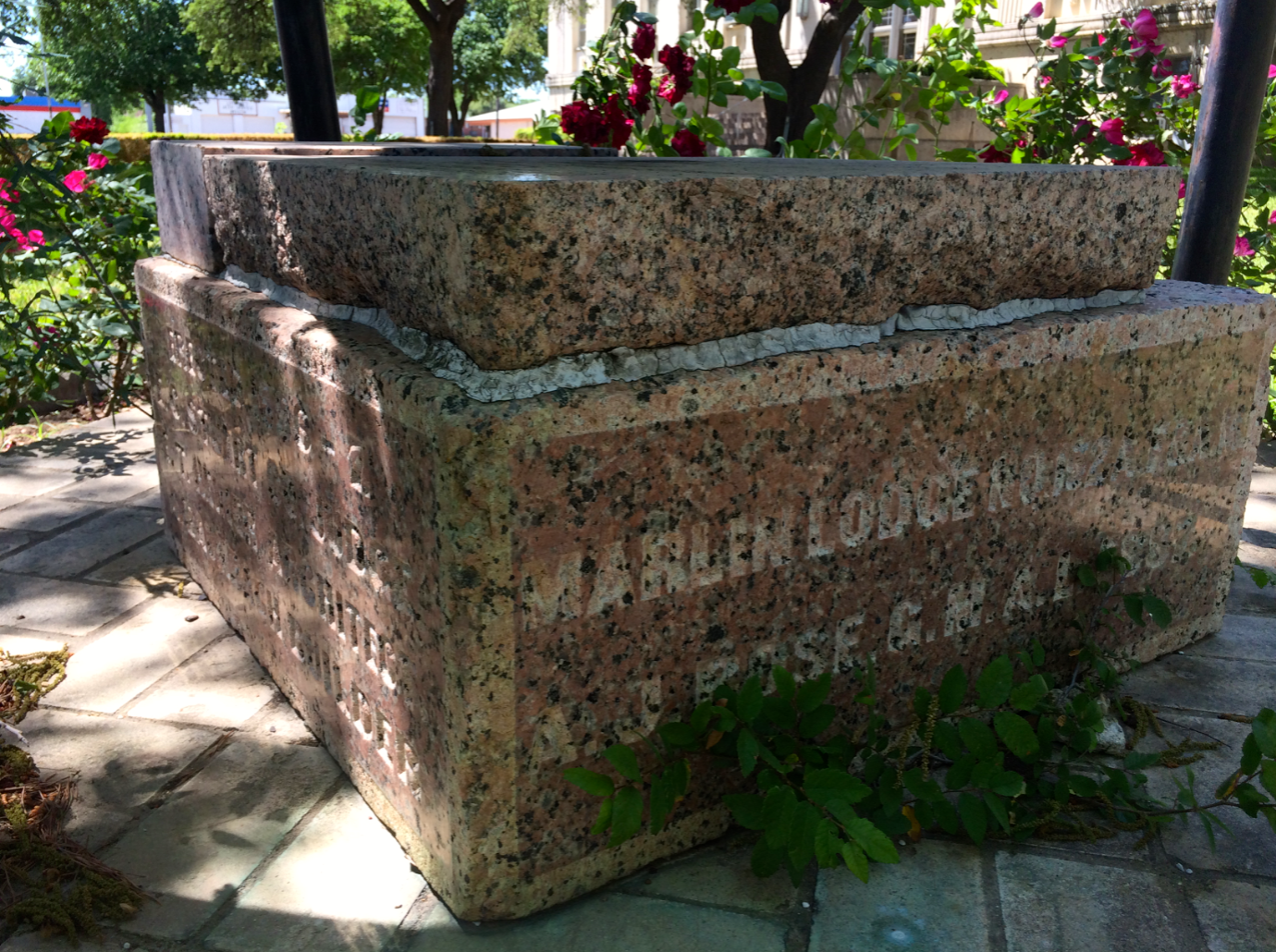 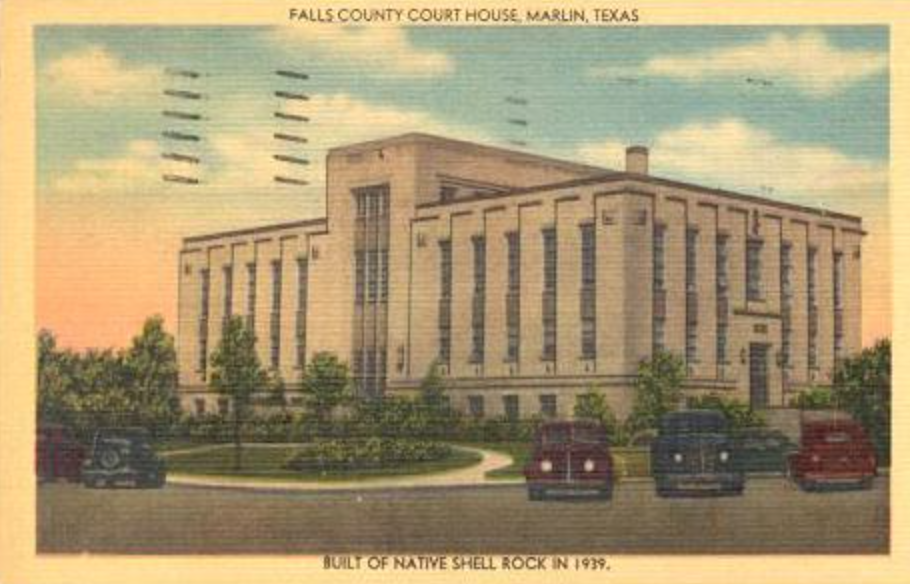 A Moderne creation of concrete, brick, and stone, this was completed towards the end of the Great Depression-era. The design was provided by Arthur E. Thomas. 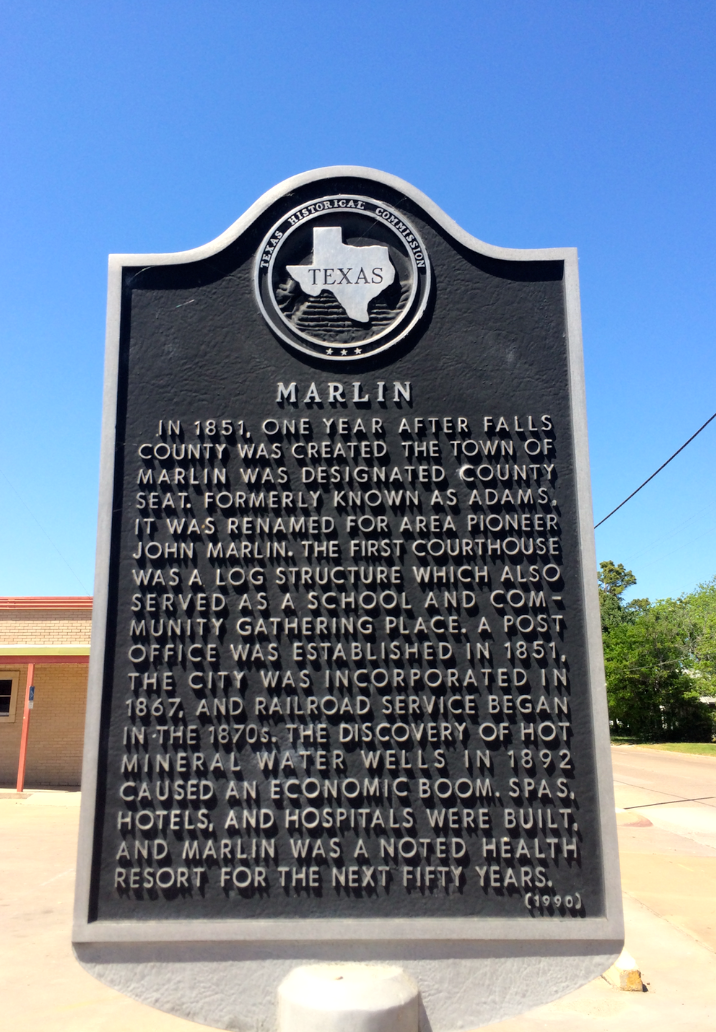 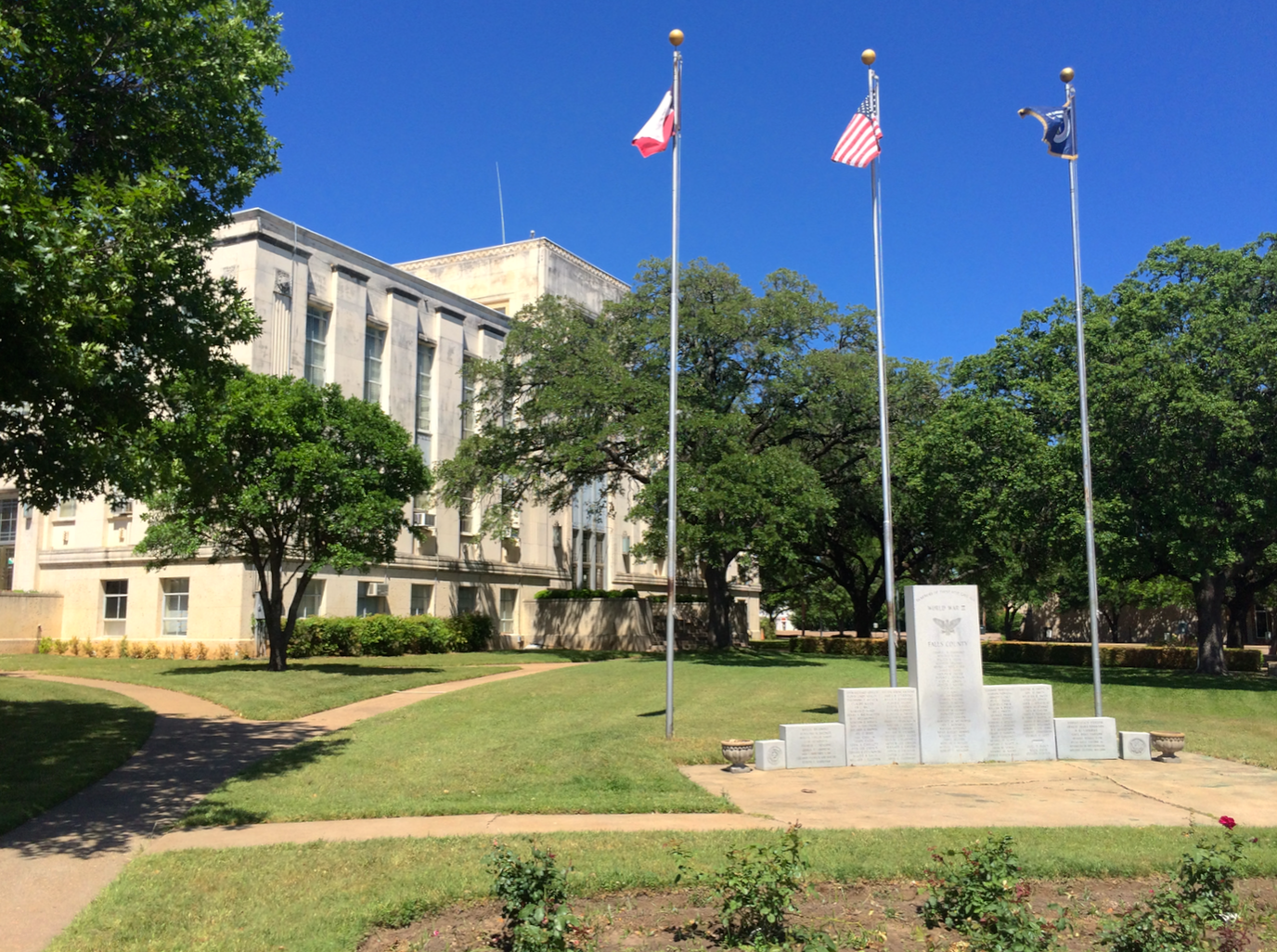 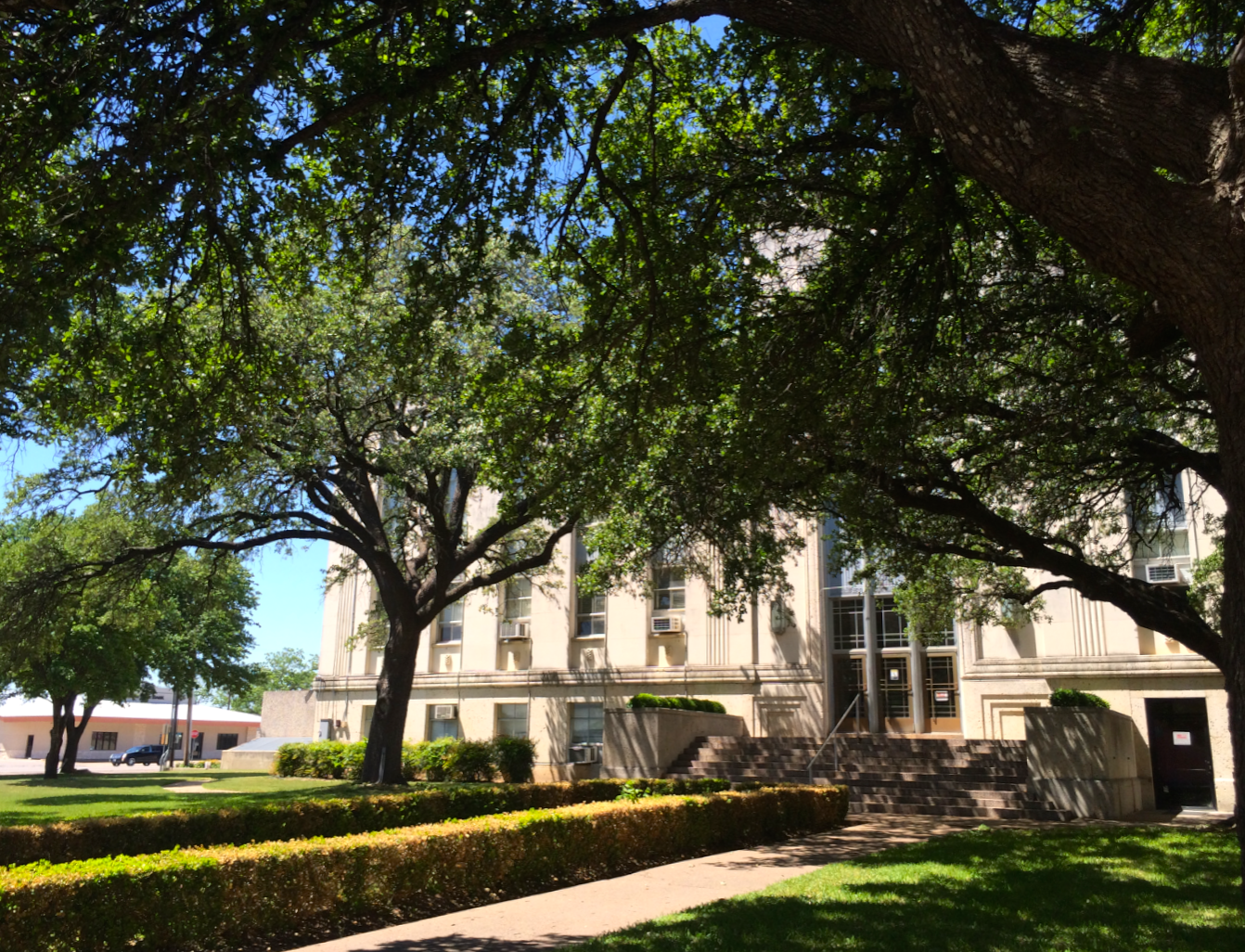 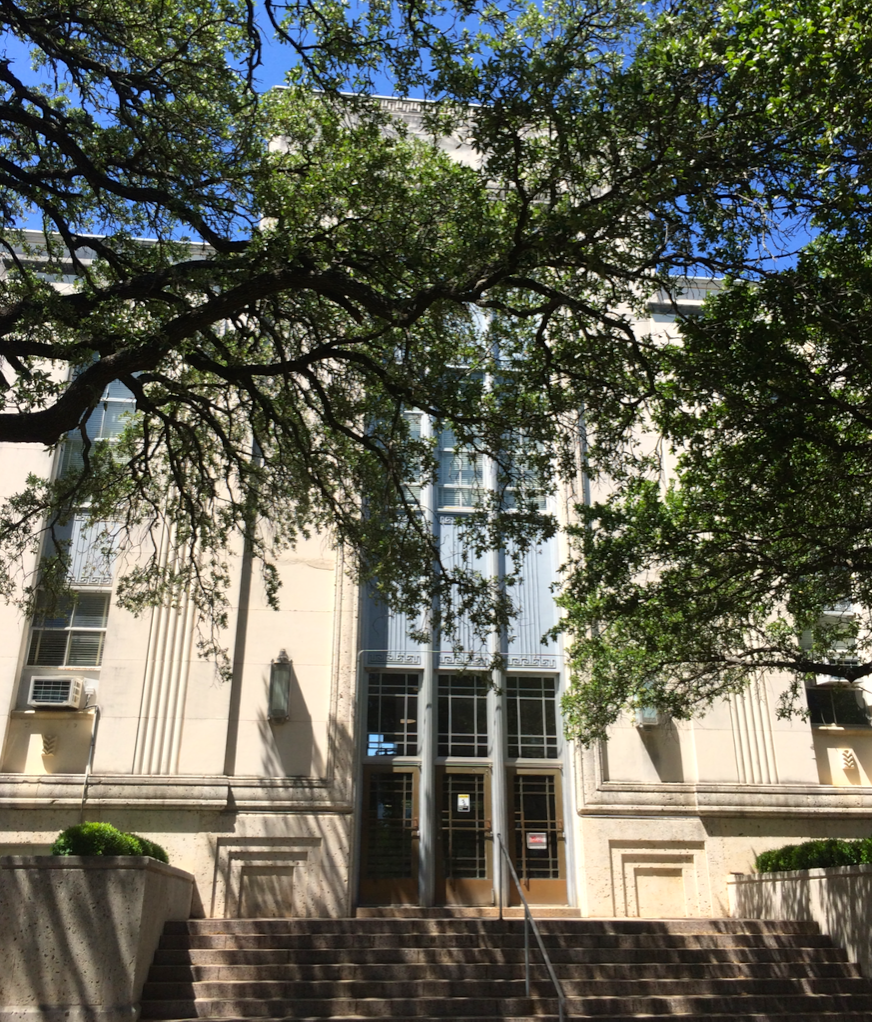 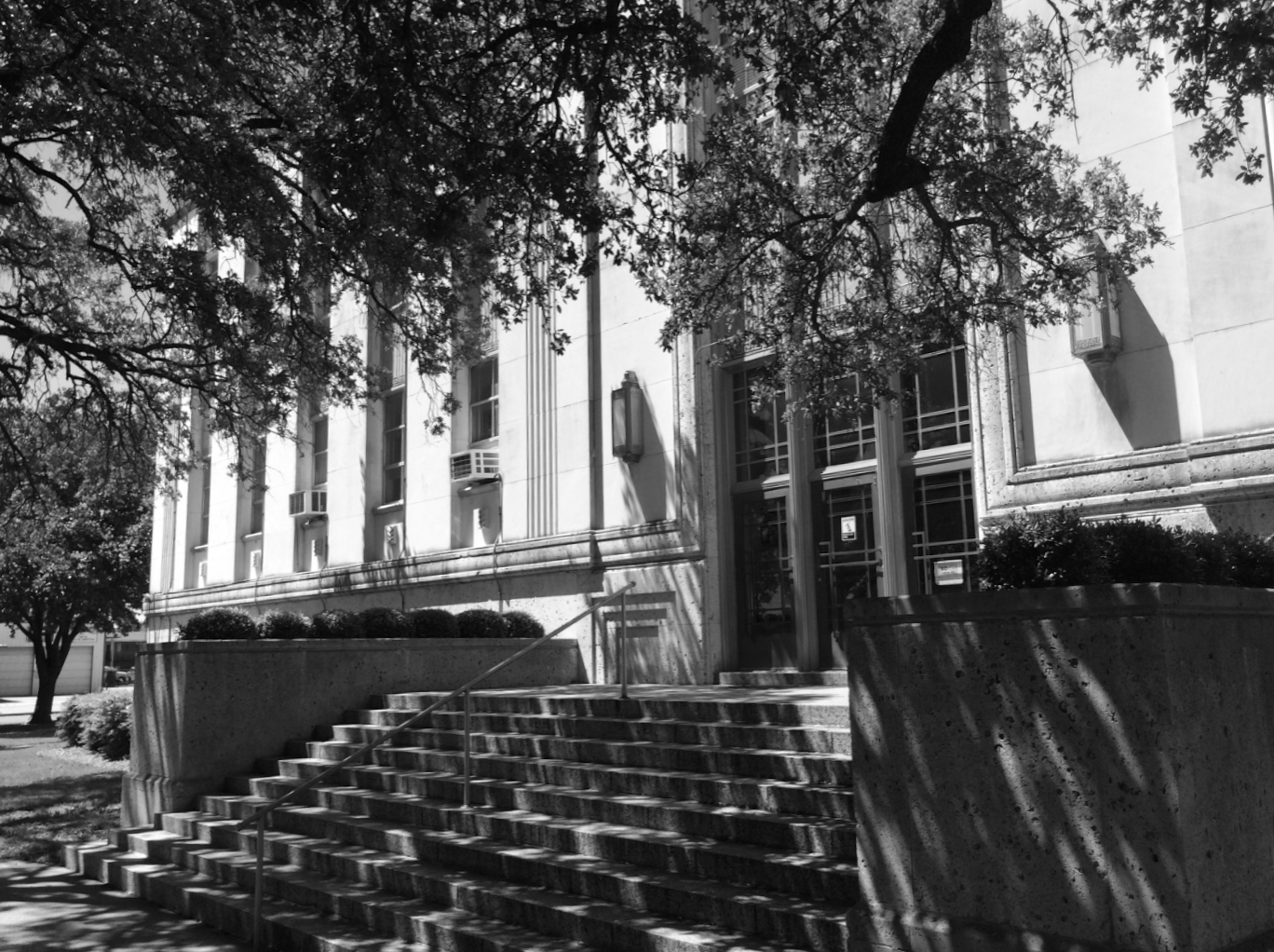 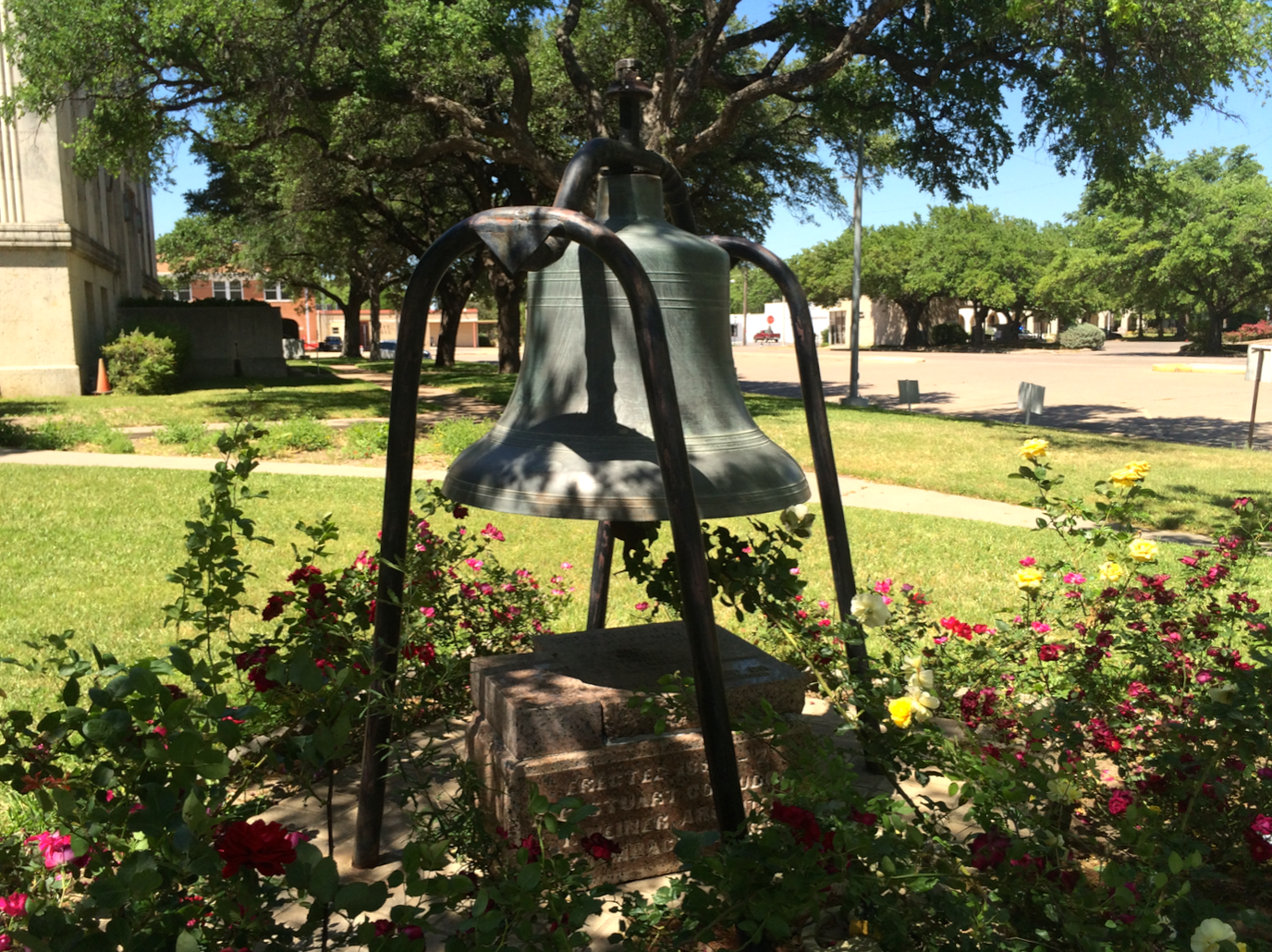 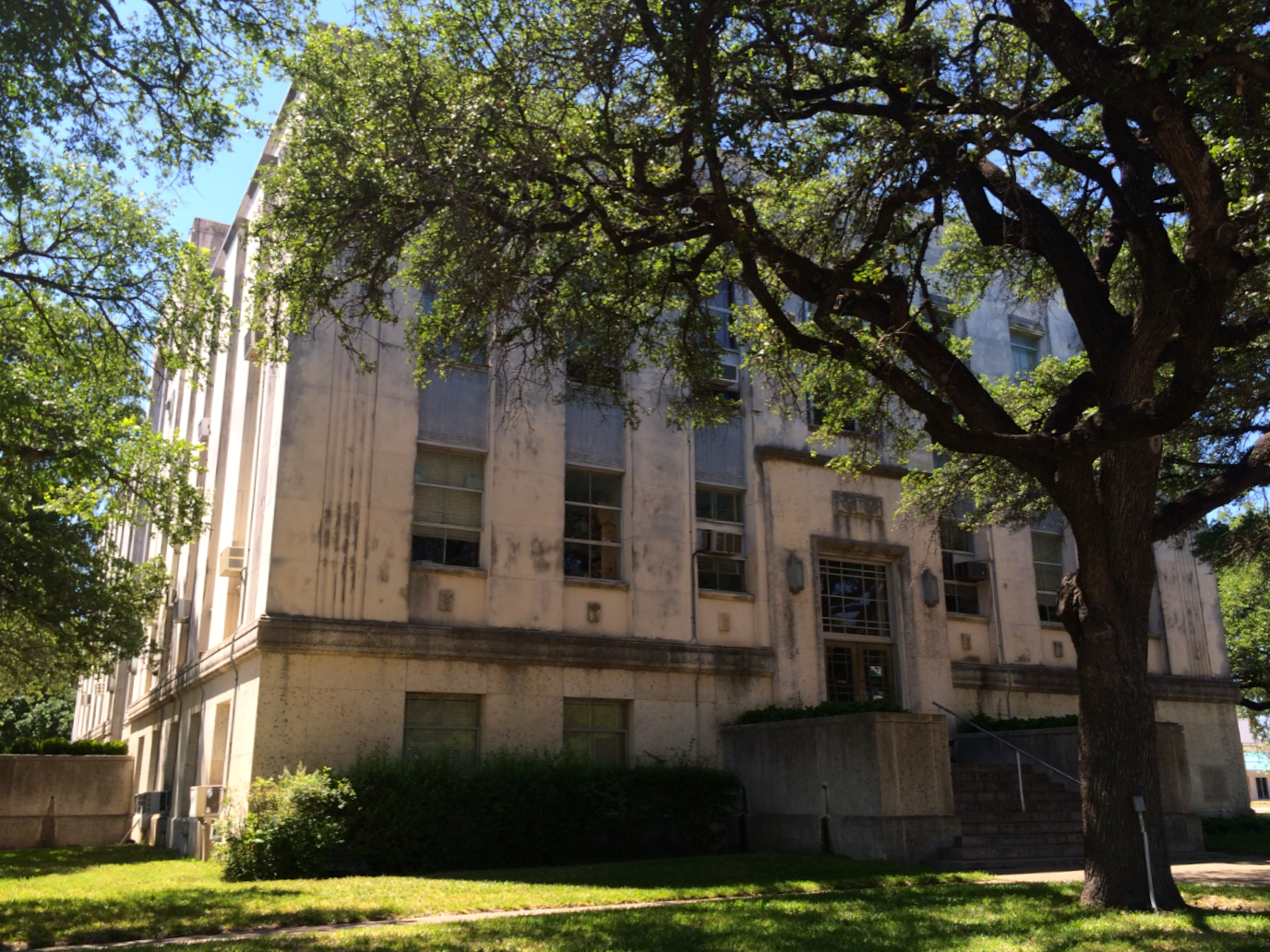 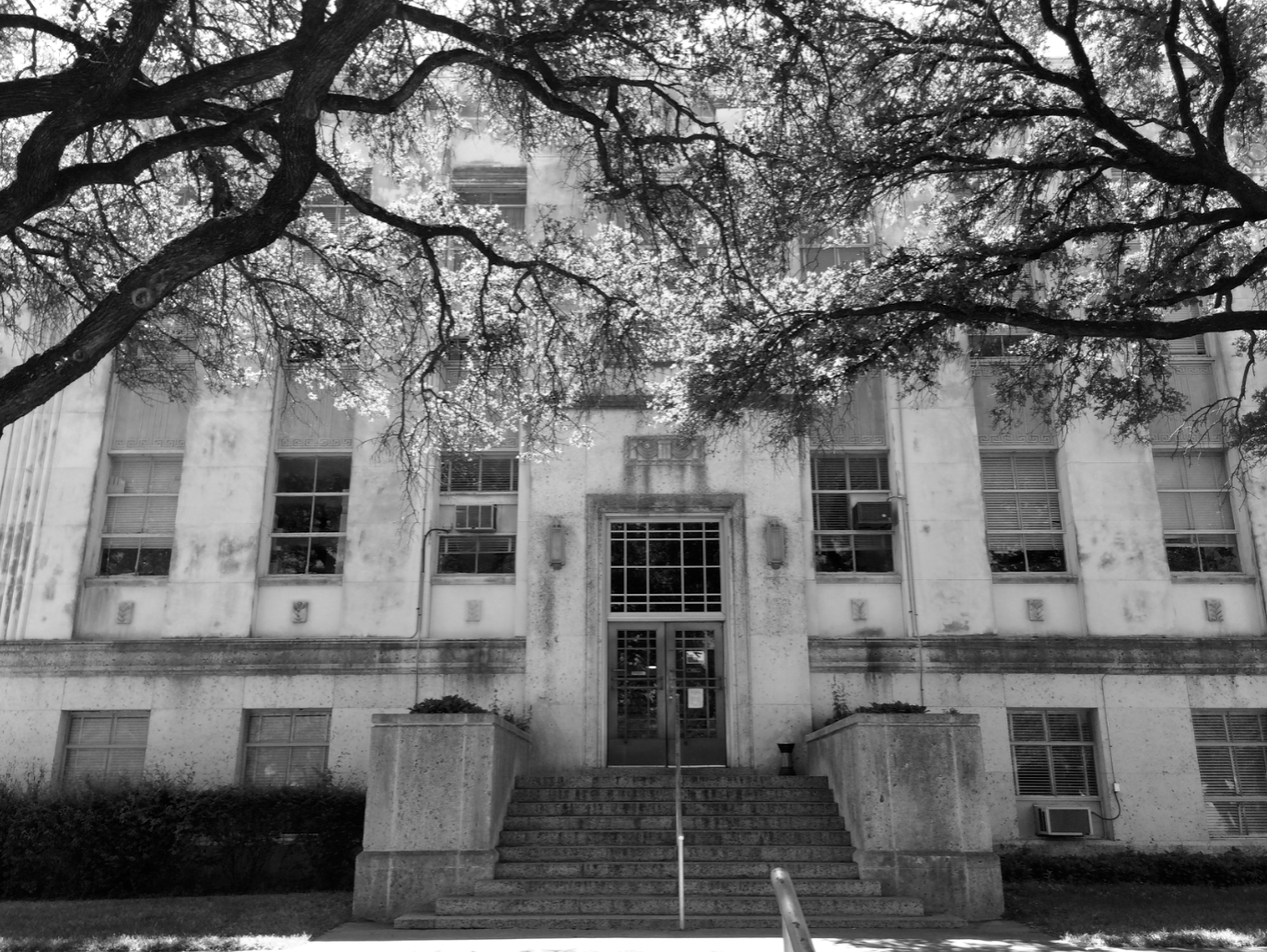 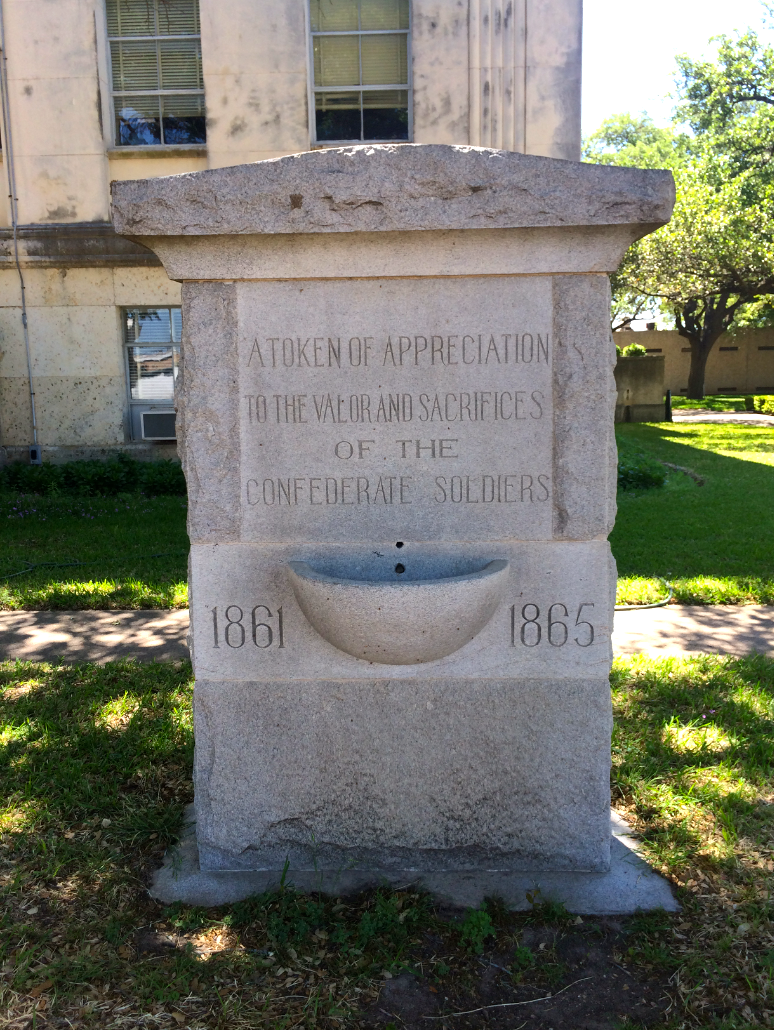 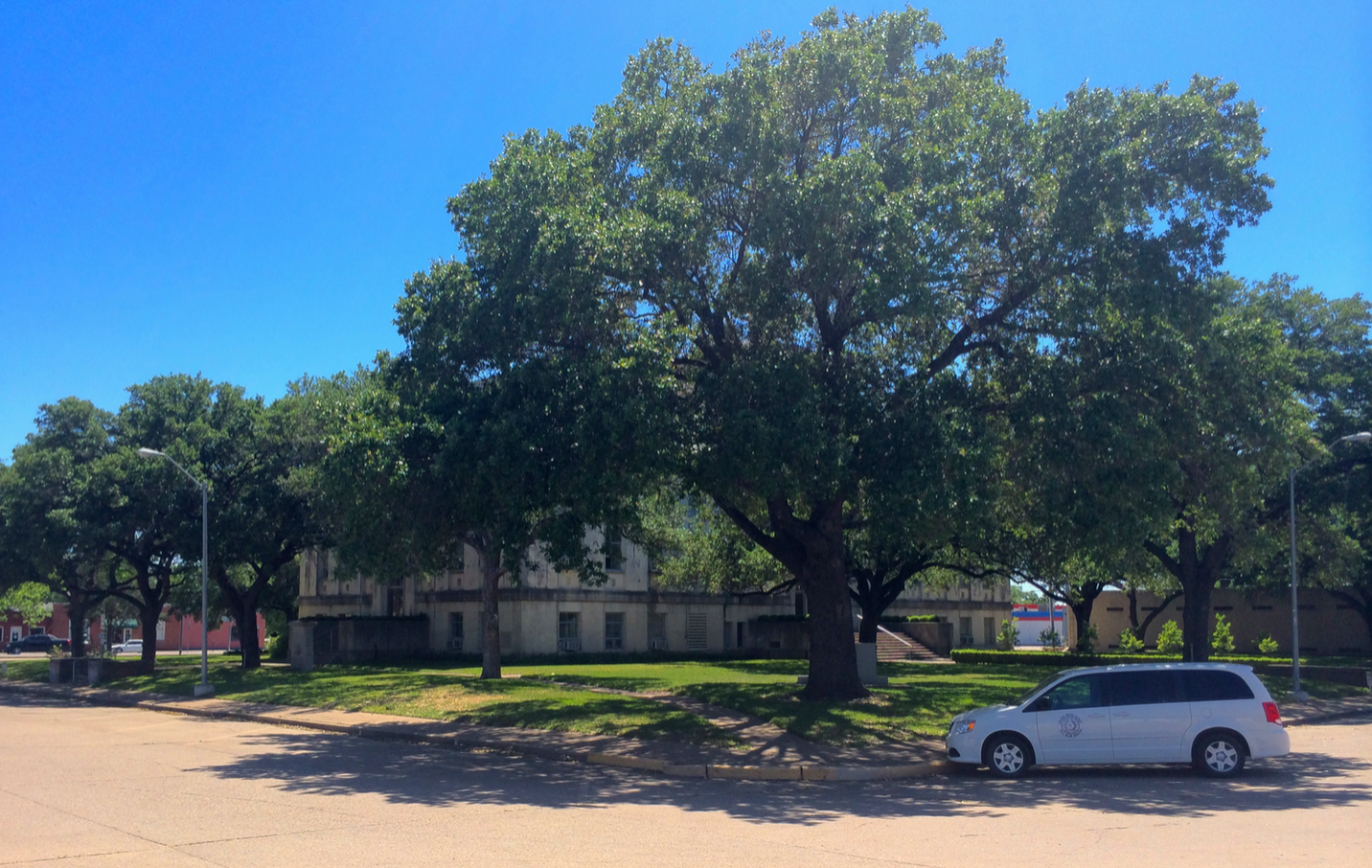 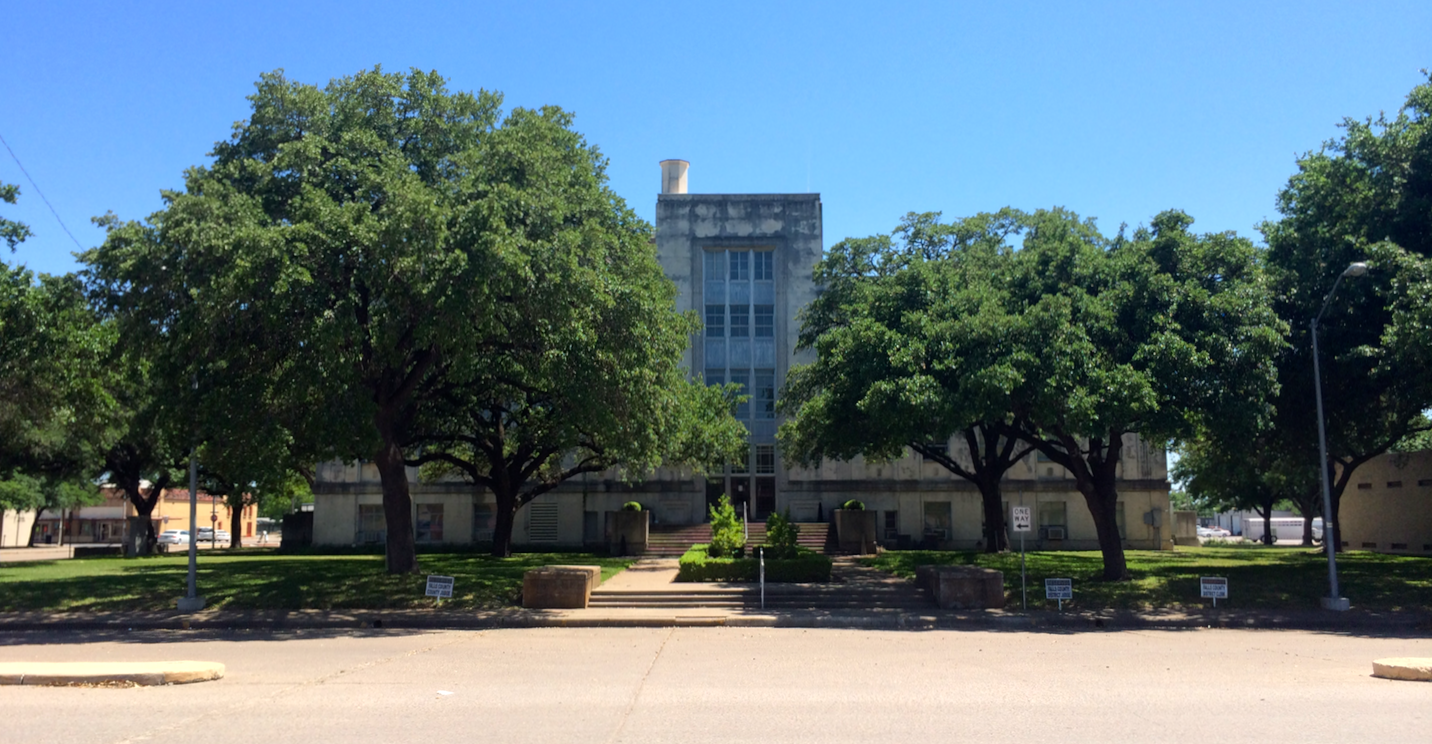 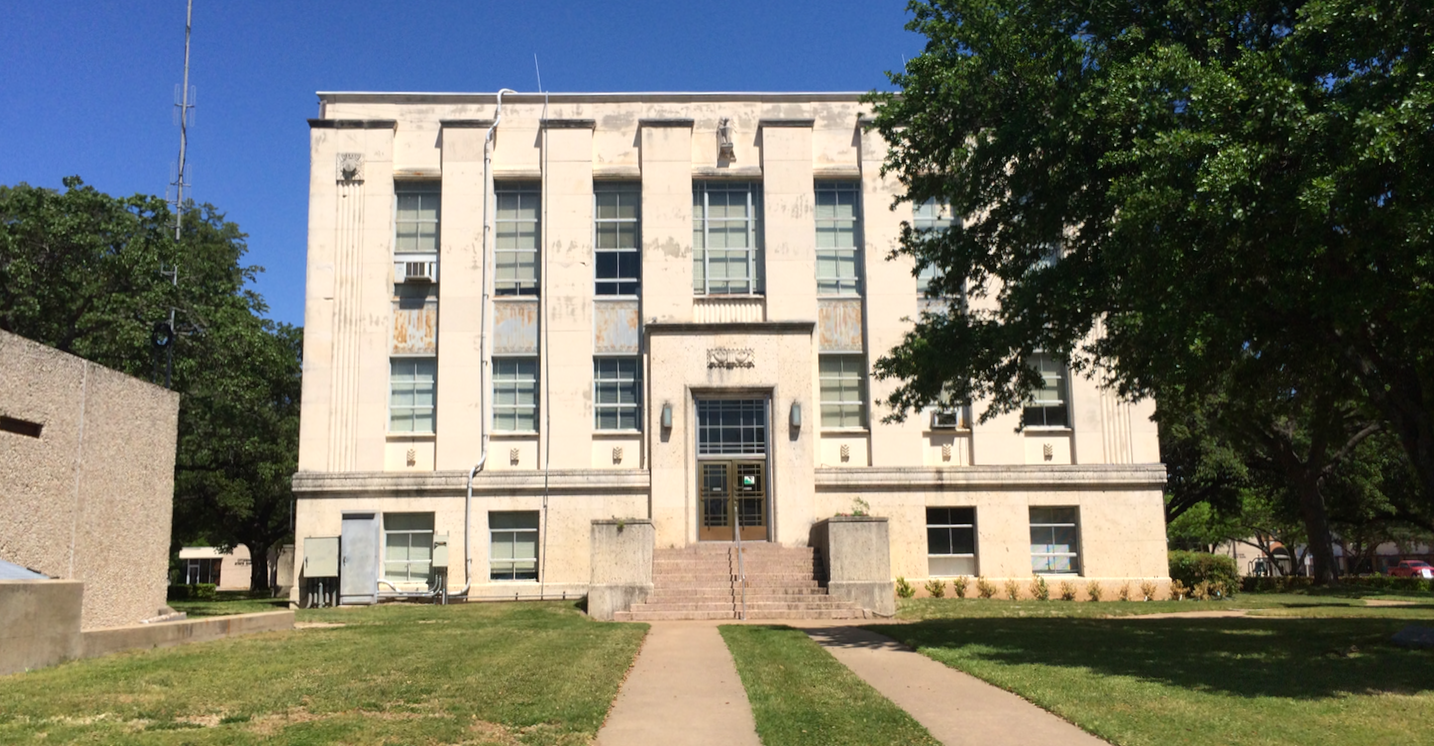