“The county was named for a pioneer Bexar County family of which José Antonio de la Garza was a well-known member. It covers 914 square miles of rough, broken land drained by tributaries of the Brazos River; elevations vary from 2,100 to 3,000 feet above sea level. The area’s sandy, loamy, and clay soils support grass, small mesquite, and thorny scrubs and cacti.”

“Garza County was formed from Bexar County in 1876. It began to be settled by ranchmen during the mid-1870s, when buffalo hunting had nearly devastated the herds. Two of the earliest ranchers in the county were Andy and Frank Long, who stocked the range south of the Double Mountain Fork of the Brazos for their OS Ranch. In 1879 W. C. Young and Ben Galbraith established the Llano Cattle Co in the northwest part of Garza County.”

“The ubiquitous West Texas rancher John B. Slaughter used Garza County rangeland during the 1870s. In 1880 the census counted thirty-six residents in the county. The last Indian raid in the county occurred in 1883 at the Curry Comb Ranch, owned by the Llano Cattle Company; in 1884, the Square and Compass Ranch put up the first barbed wire fence in the county. The disastrous winter of 1885–86 and the drought of 1886 discouraged some of the early ranchers, and by 1890 only fourteen residents remained.” 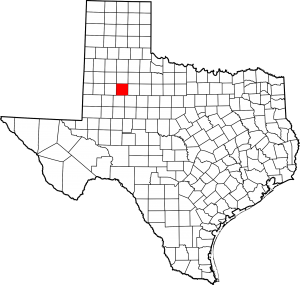 “The development of the county quickly accelerated after 1906, when Charles William Post bought 250,000 acres in Lynn and Garza counties to start an experimental colony. He bought a number of ranches, fenced off the land in 160-acre tracts, laid out a townsite, built houses, and in other ways worked to attract settlers. In 1907 Garza County was formally organized, with the new town of Post City designated as county seat. Land speculators and liquor were banned in the settlement. That same year, Stockton Henry began publication of the Post City Post. By one estimate, more than 1,200 families followed the cereal millionaire to the colony, and the company town Post named for himself hastened the development of the entire region. Transportation improved with an extension southward through the county of the Panhandle and Santa Fe Railway in 1910.”

“C. W. Post sponsored a number of agricultural experiments in the area. His rainmaking efforts between 1910 and 1913 were some of the more colorful, if less conclusive, of these. Post’s “rain battles,” as he called them, involved the heavy use of explosives fired from kites and towers along the rim of the Caprock. Though more than half of the “battles” produced immediate measurable moisture, the project did not actually contribute to the colony’s success in agriculture. Nevertheless, by 1910 there were eighty-one farms and ranches in Garza County, and the population had increased to 1,995; by 1920 farms and ranches numbered 425 and residents 4,253.”

“Though C. W. Post is and was best known for his cereal company, little corn or wheat was grown by the settlers he attracted to his colony: instead, cotton became the foundation of the area’s agricultural economy. Post built a gin in 1909 and a cotton mill in 1911, and by 1920 cotton culture occupied almost 18,358 acres in Garza County; corn was planted on 1,389 acres, and wheat production was negligible.”

“The discovery of oil in the area in 1926 helped somewhat to offset the worst effects of the depression. Although the area lost many farms during the 1930s, the county’s population actually rose slightly during that time; in 1940, 5,678 people lived in Garza County.”

“By January 1991, 250,618,823 barrels of petroleum had been extracted in Garza County since 1926. The petroleum industry helped to diversify and stabilize the economy, which remains fundamentally agricultural. The most important county industries in the early 1980s were agribusiness, oil and gas extraction, and textile mills.”

“Post (population, 5,470) is the county’s seat of government and largest town; other communities include Justiceburg, Graham, Close City, and Pleasant Valley. The county offers visitors lake activities, scenic areas, the Post-Garza Museum, and Founders Day, which is held in September.”

The first courthouse in Garza County bore no surviving photos. It was constructed in 1908, only a year after the county was formally organized (due to the efforts of C.W. Post).

The courthouse was a “two story rusticated stone building” and had “the appearance of a very simple commercial structure with storefronts on the first floor”. Architect F.L. Maupin brought it into existence and charged the county $5,044 for his work.

The Texas Historical Commission describes it as follows:

“The second level was accented by three evenly spaced, wood double hung windows. The building was capped by a modest metal or stone cornice. This building was located two blocks east of the current courthouse.” 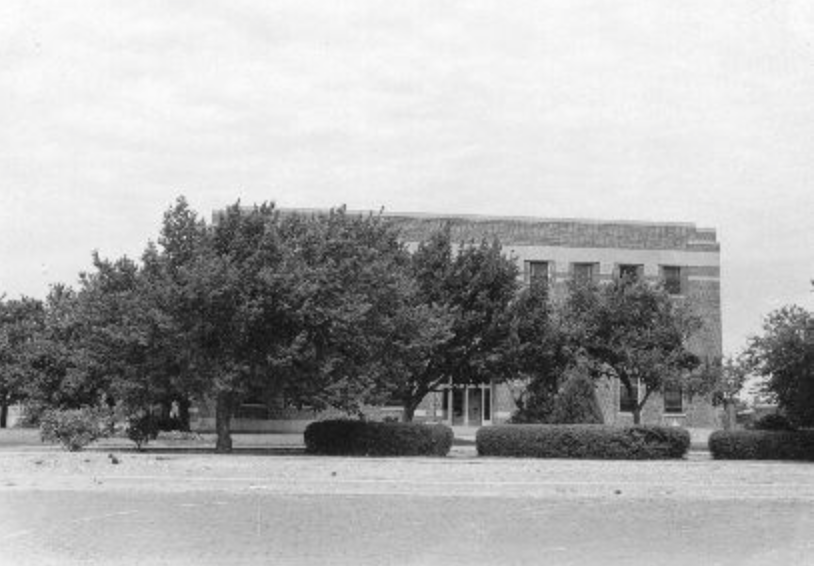 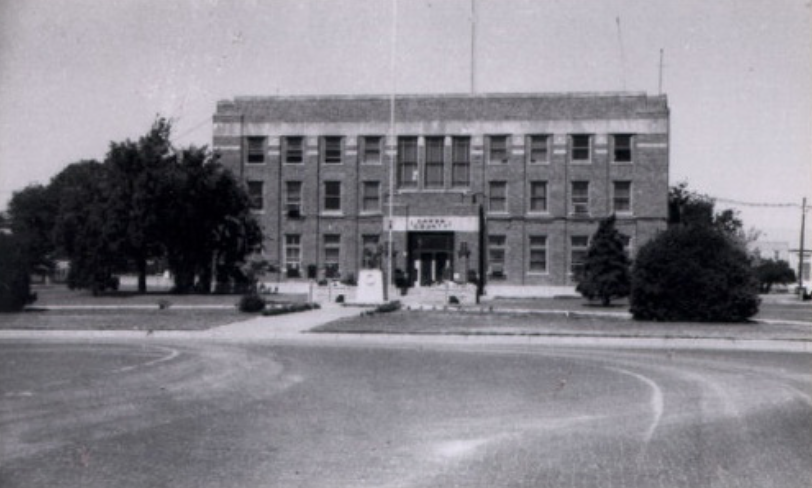 This building hails from the era of architectural history known as the Texas Renaissance period. In my experience, some very intriguing buildings originated then. It was that short period right between the beginning of the end for the Classical Revival style of approximately 1905-1925 and the Moderne era from 1930 to 1950.

Something like the Garza County courthouse doesn’t exactly fit in either of those, so we call it dub it as part of our state’s own architectural renaissance. In my opinion, our renaissance was was really at the end of the 1800s when France’s Second Empire style reached our shores and Romanesque Revival dominated. Such was a time when you got the likes of Hopkins and Ellis Counties.

Of course, the Garza County is equally as pleasant (just in its own way).

Guy Carlander, a prominent architect from Amarillo was chosen to design the building. Contracting work was provided by the Fred T. Bone Company, who also happened to be from Amarillo.

“Built in 1923 of reinforced concrete with brick exterior and cast stone details, the Garza County courthouse is a late, but fine, example of Prairie School architecture.”

It stands three stories, and it made from dark, red brick. It cost Garza County $65,490. 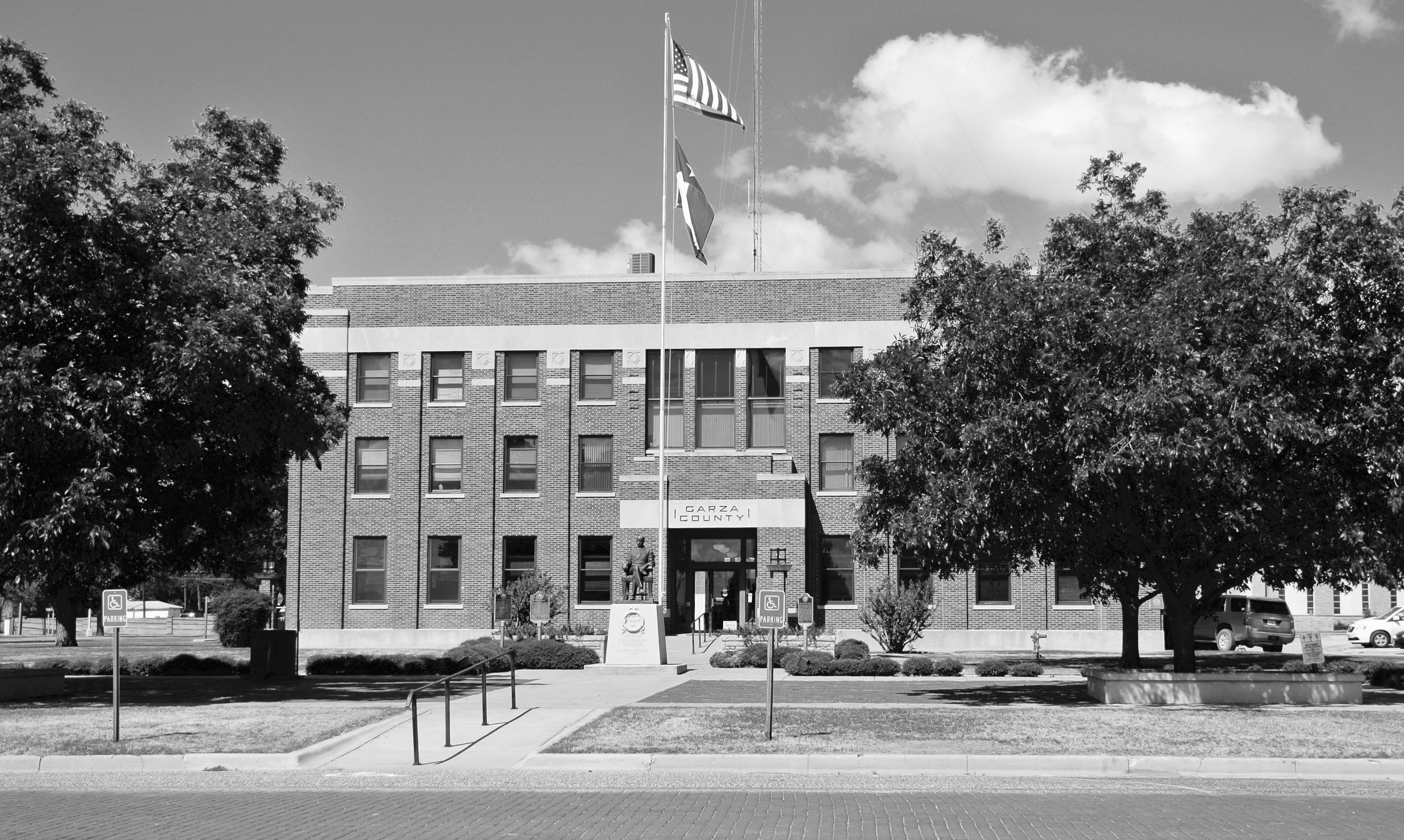 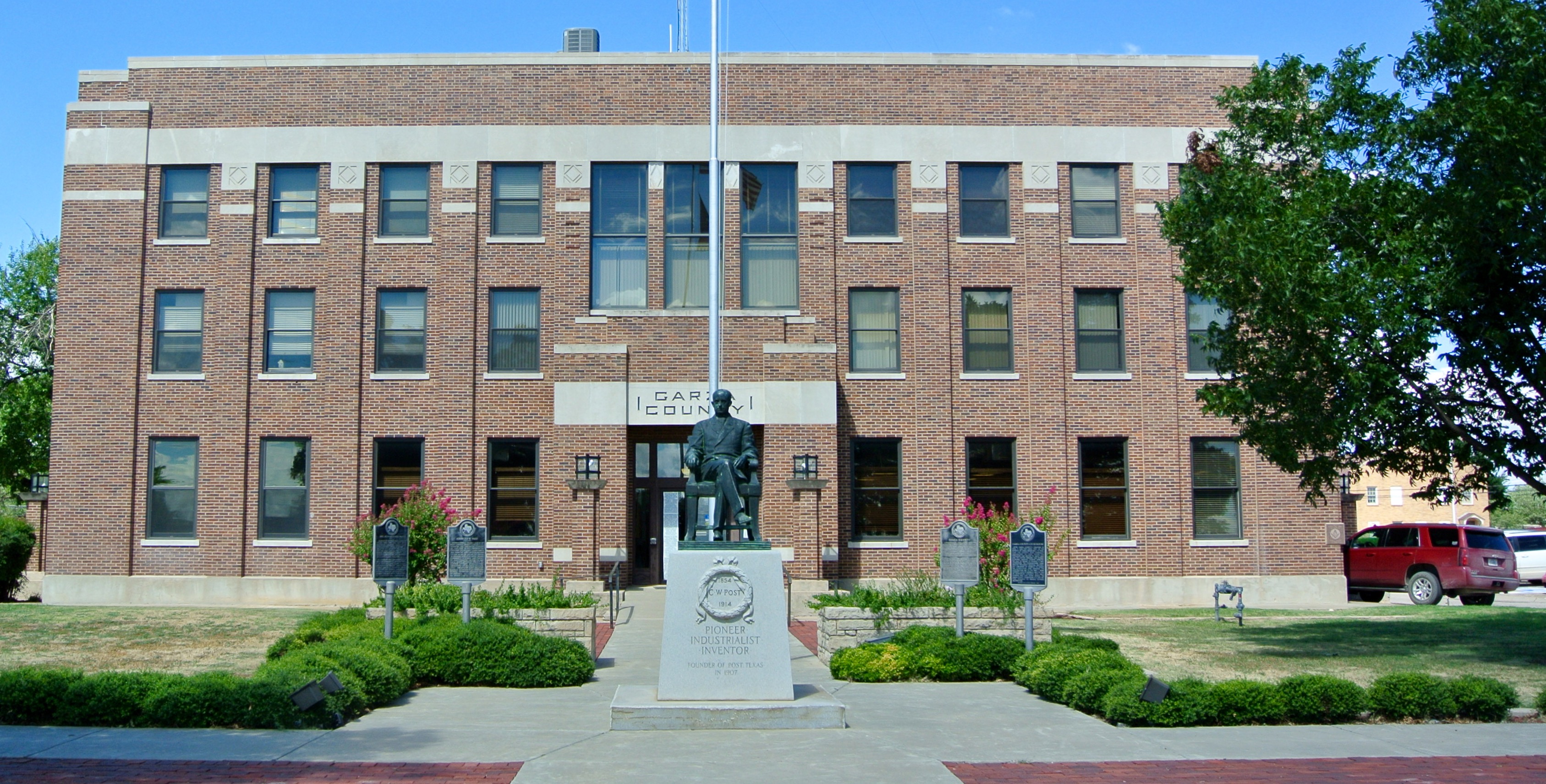 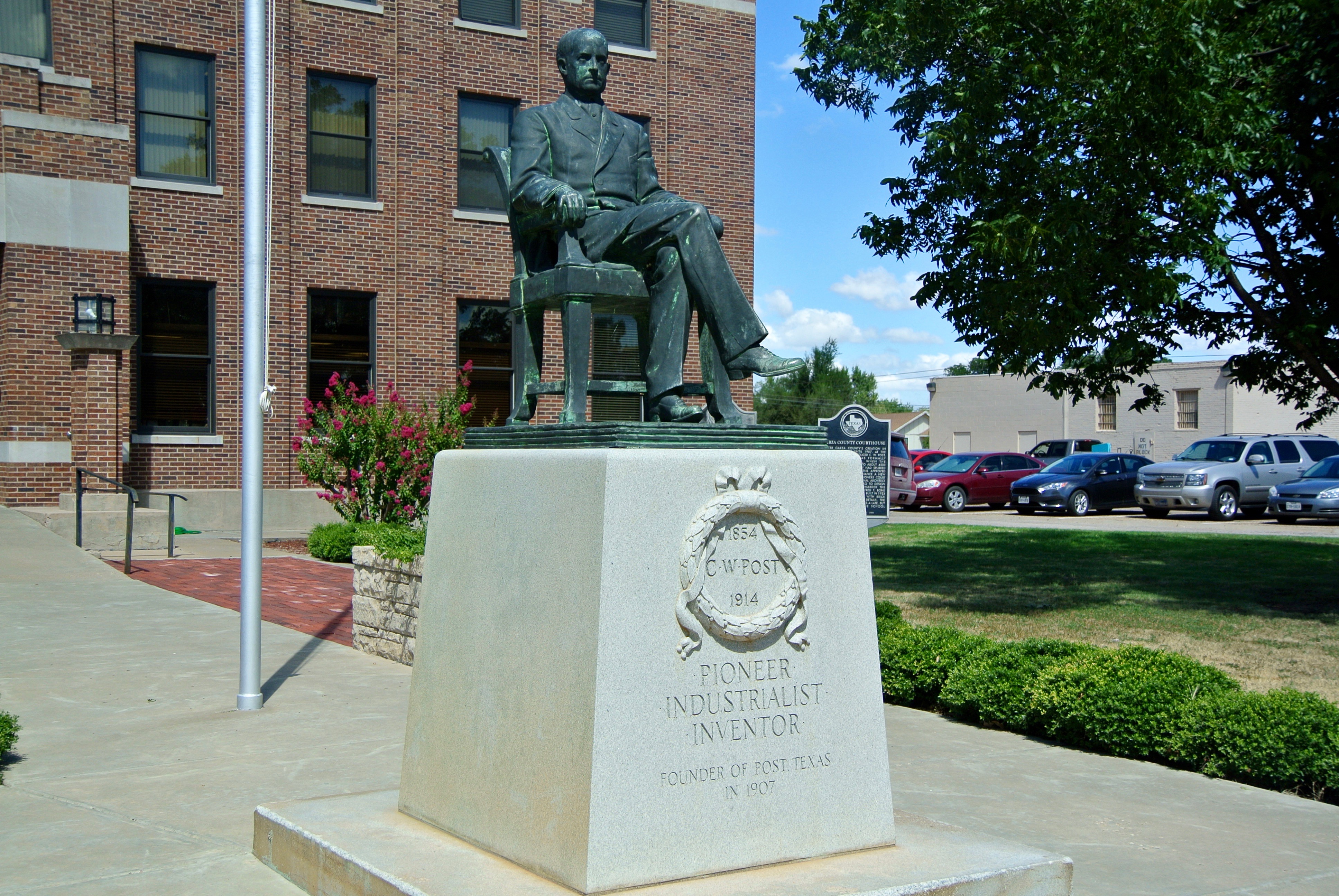 The years haven’t been too kind to him. 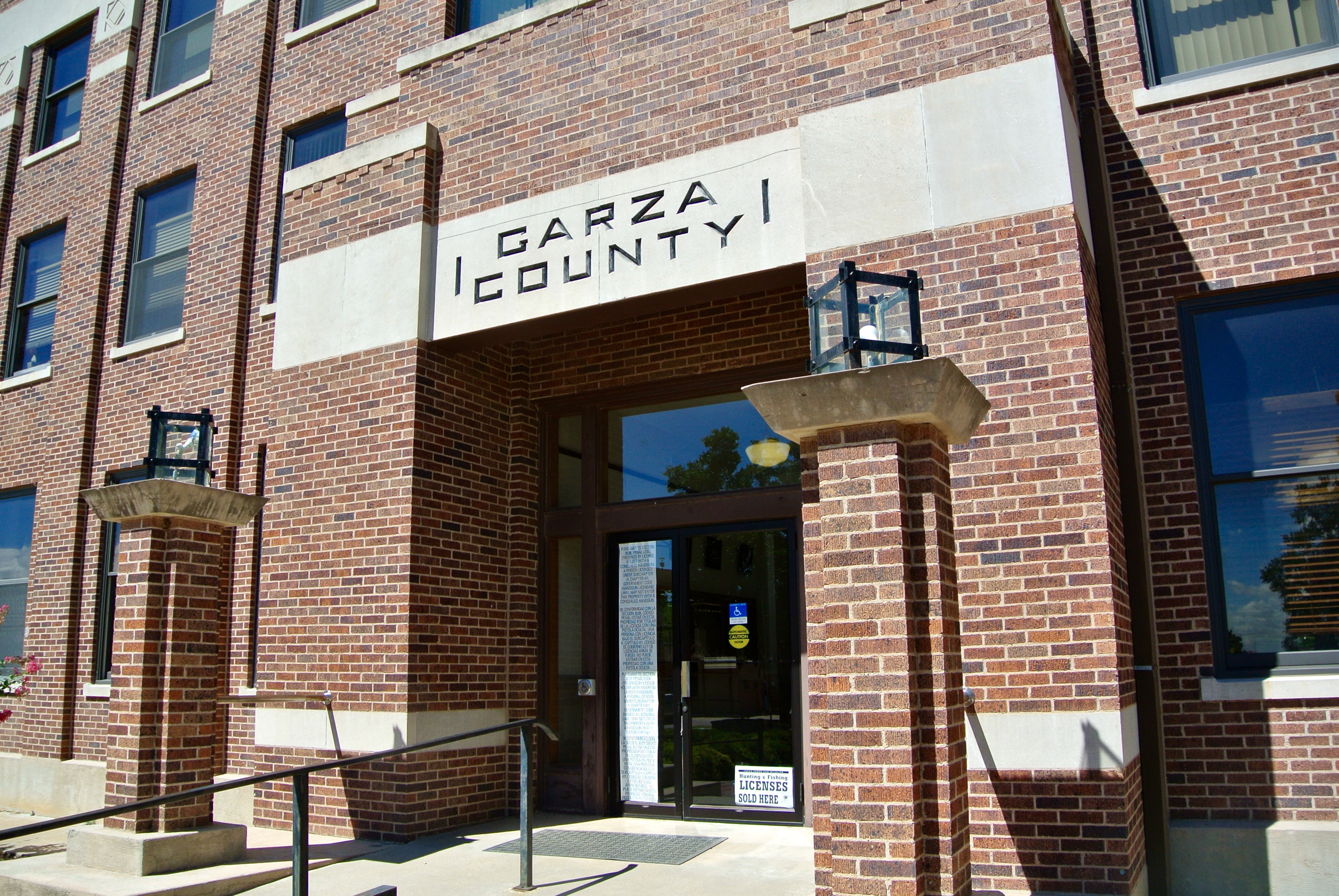 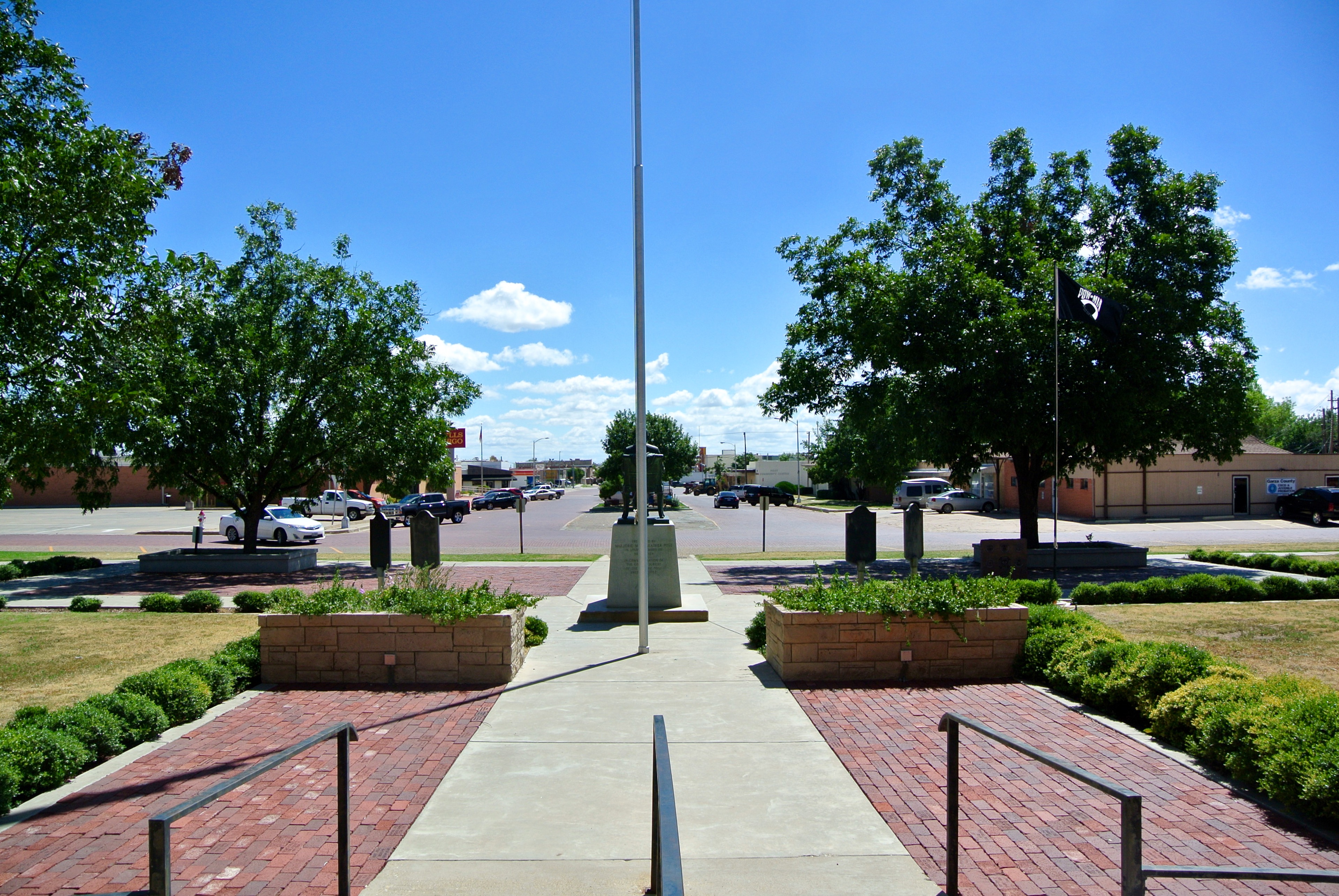 The view of Main and Avenue L from the front doors 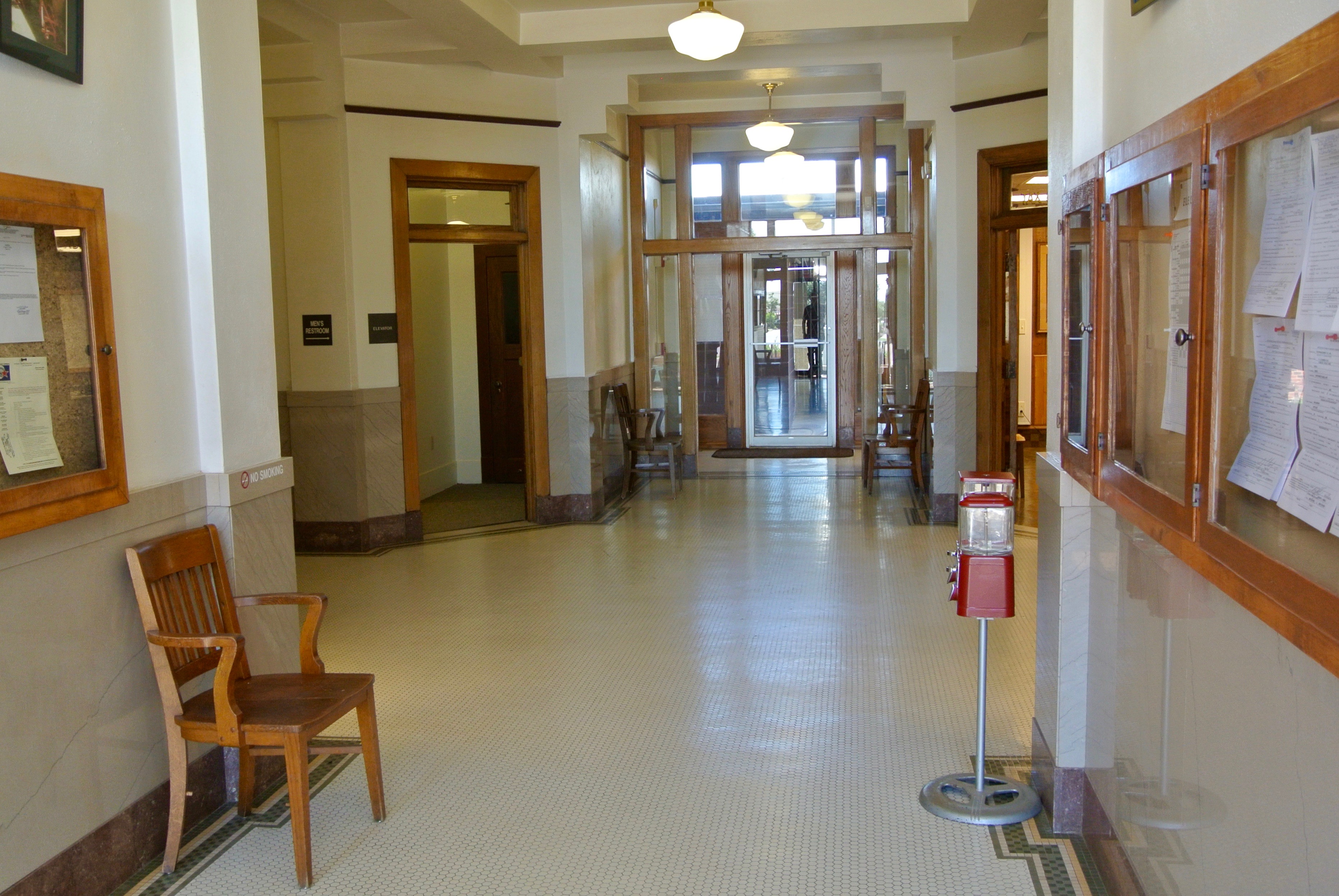 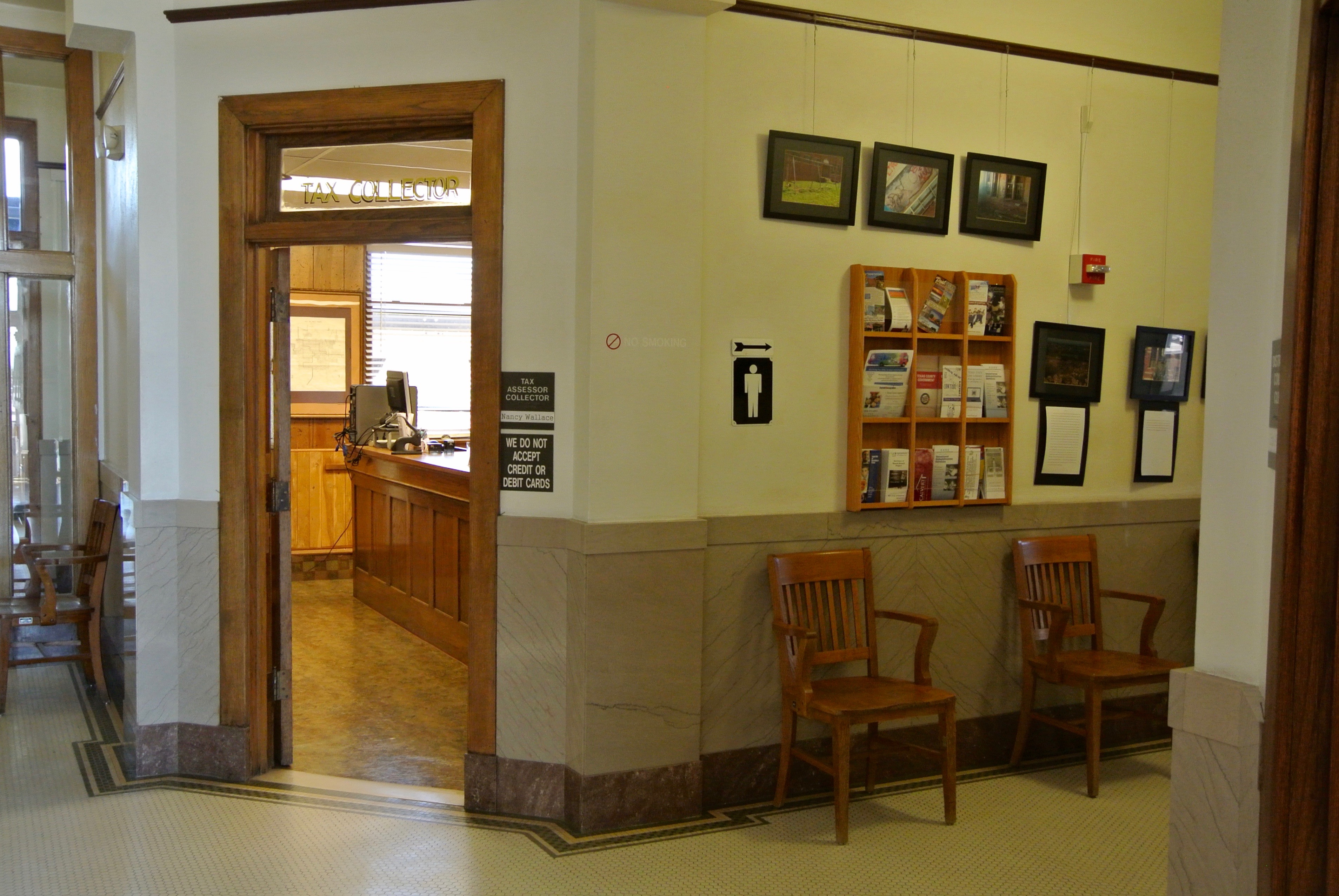 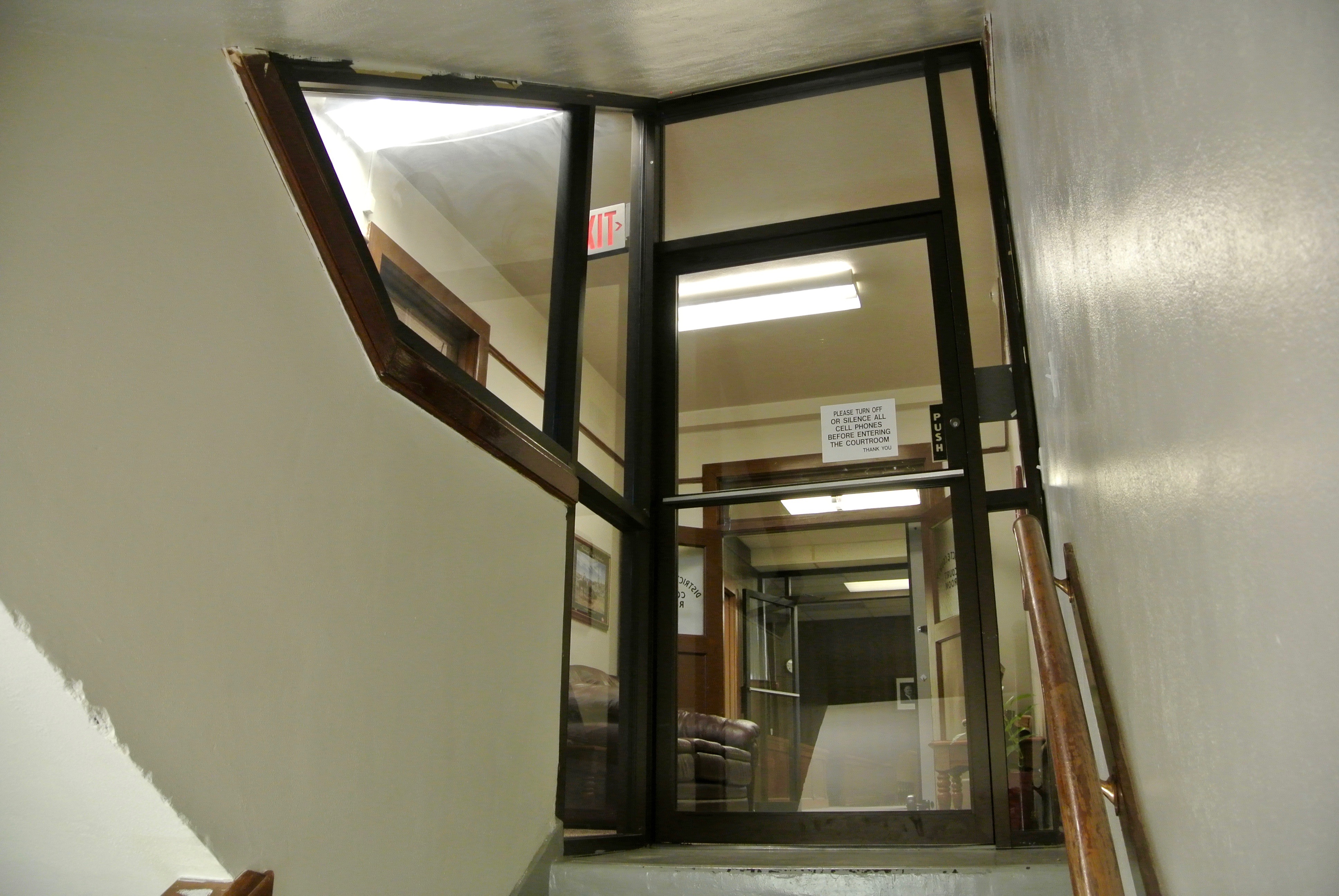 Interestingly enough, the entire second floor is marked off by a door and glass paneling. 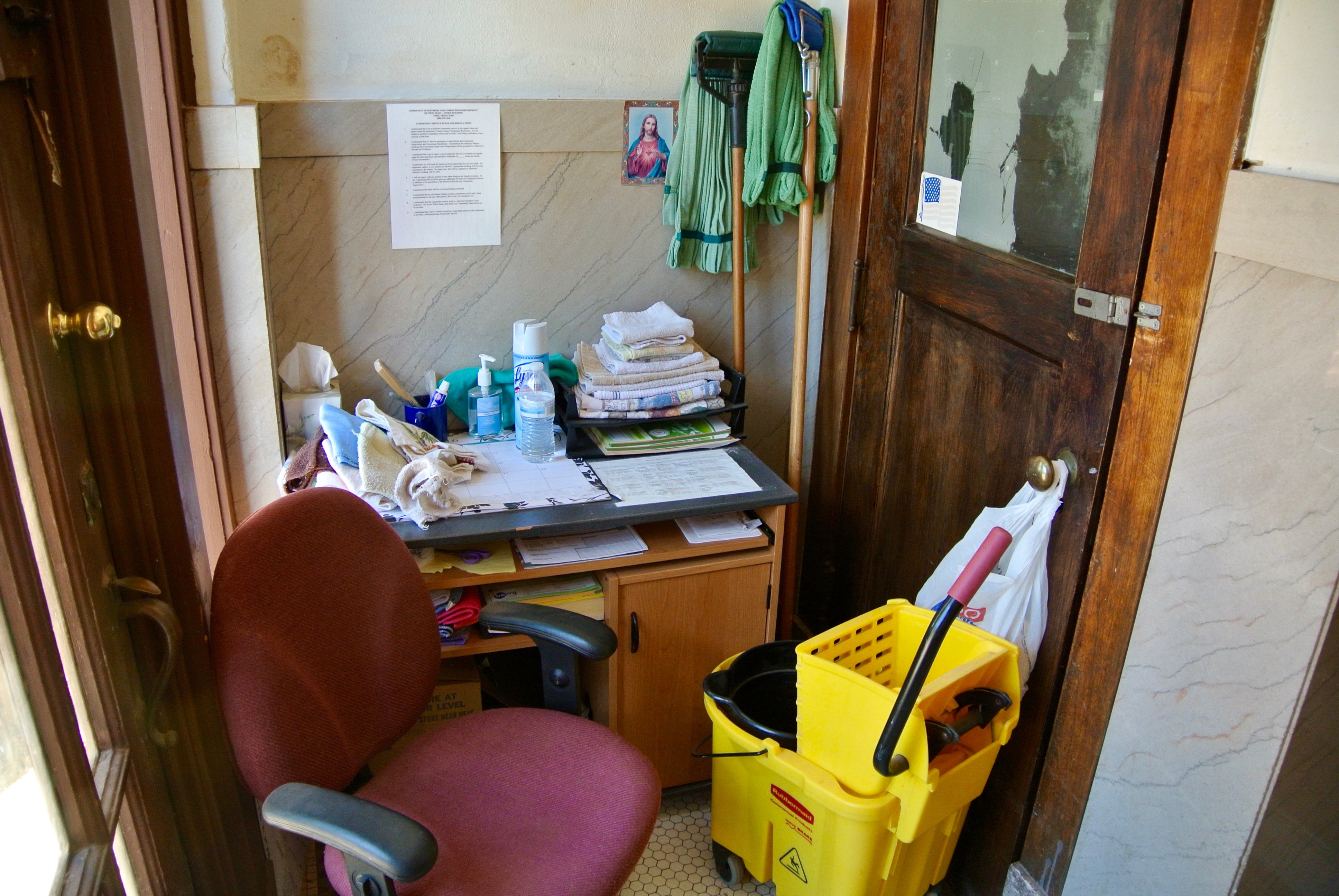 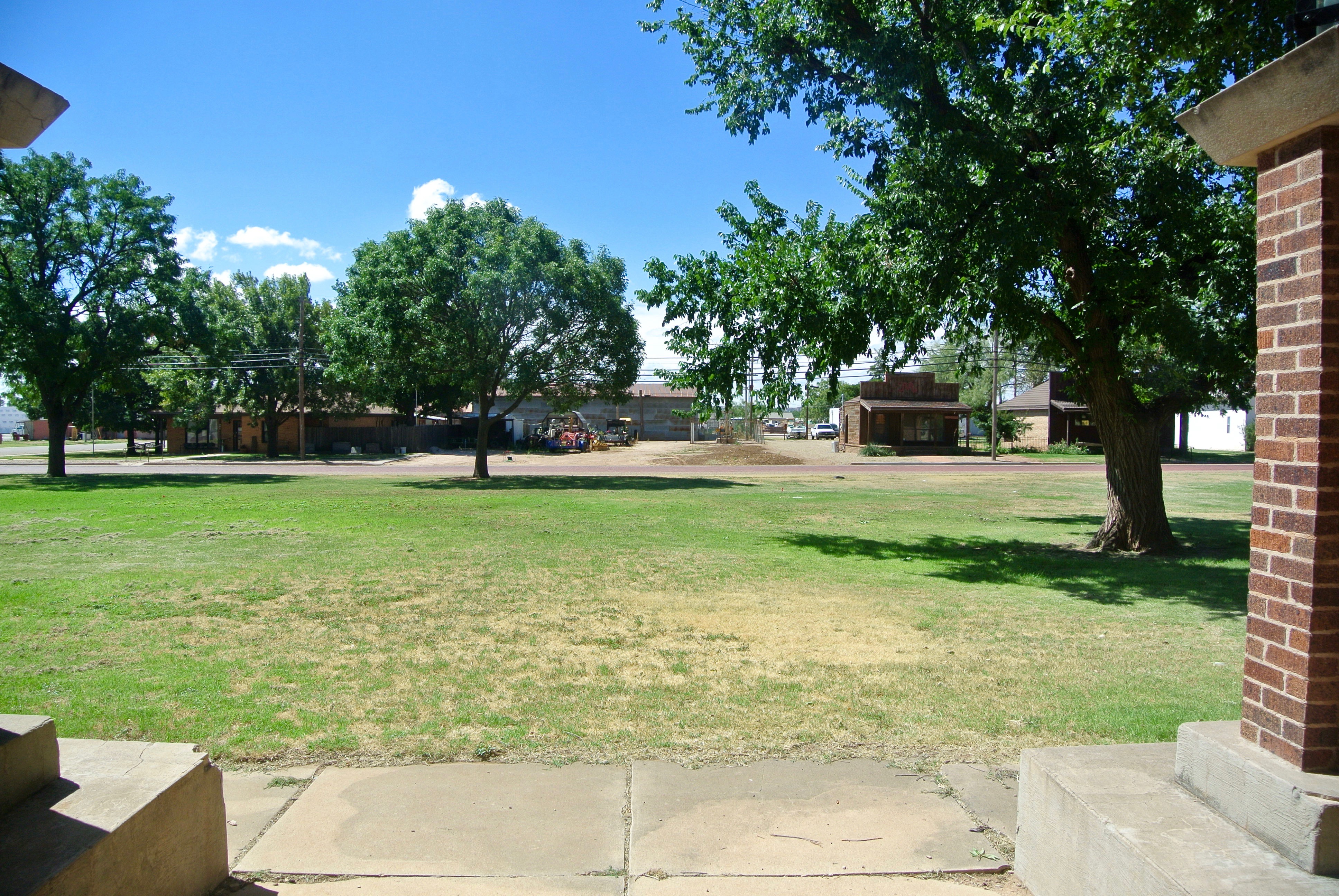 This is the view from the southern doors. This entrance is not popularity used, as you can probably tell. There’s no walkway leading up to it. 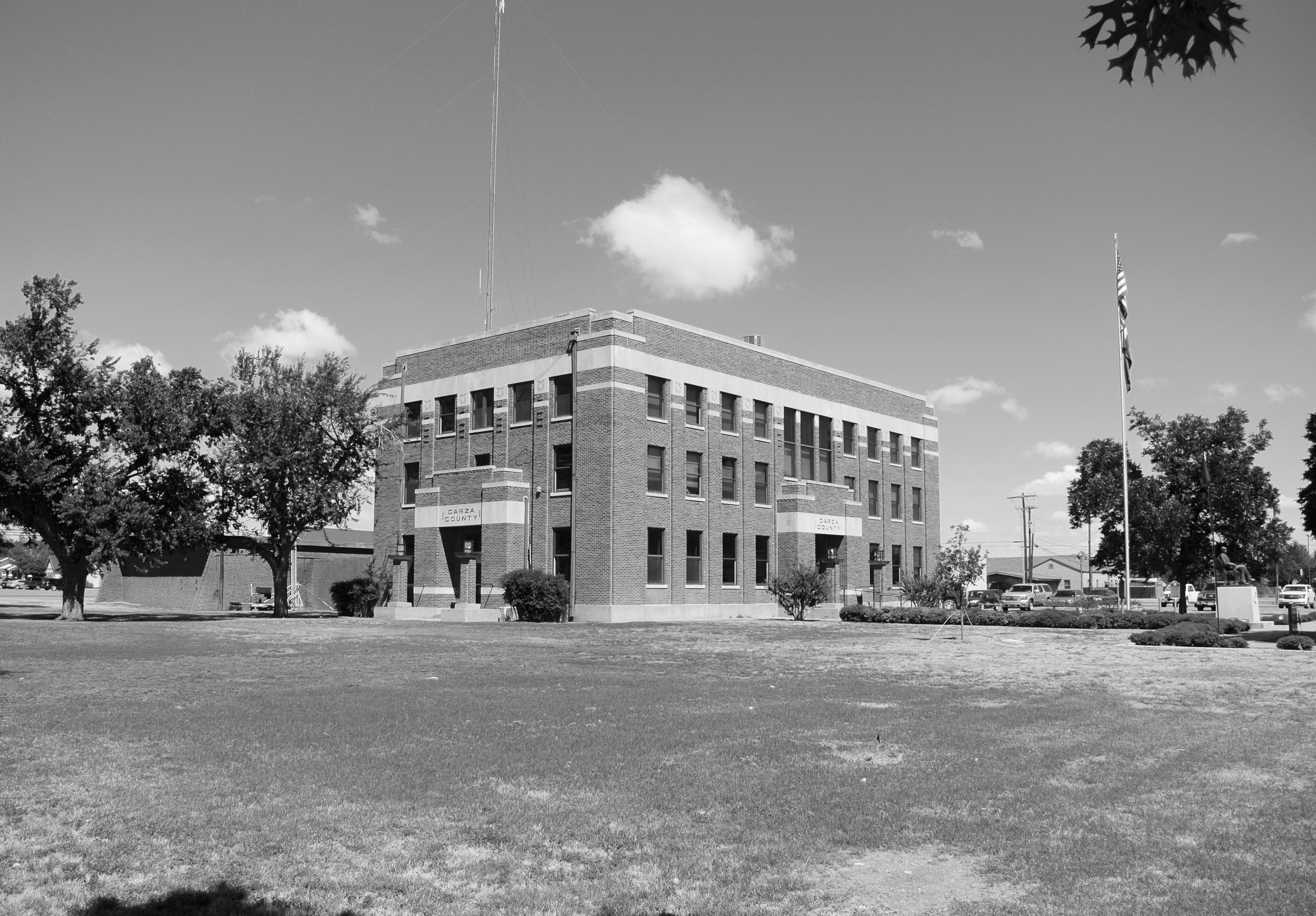 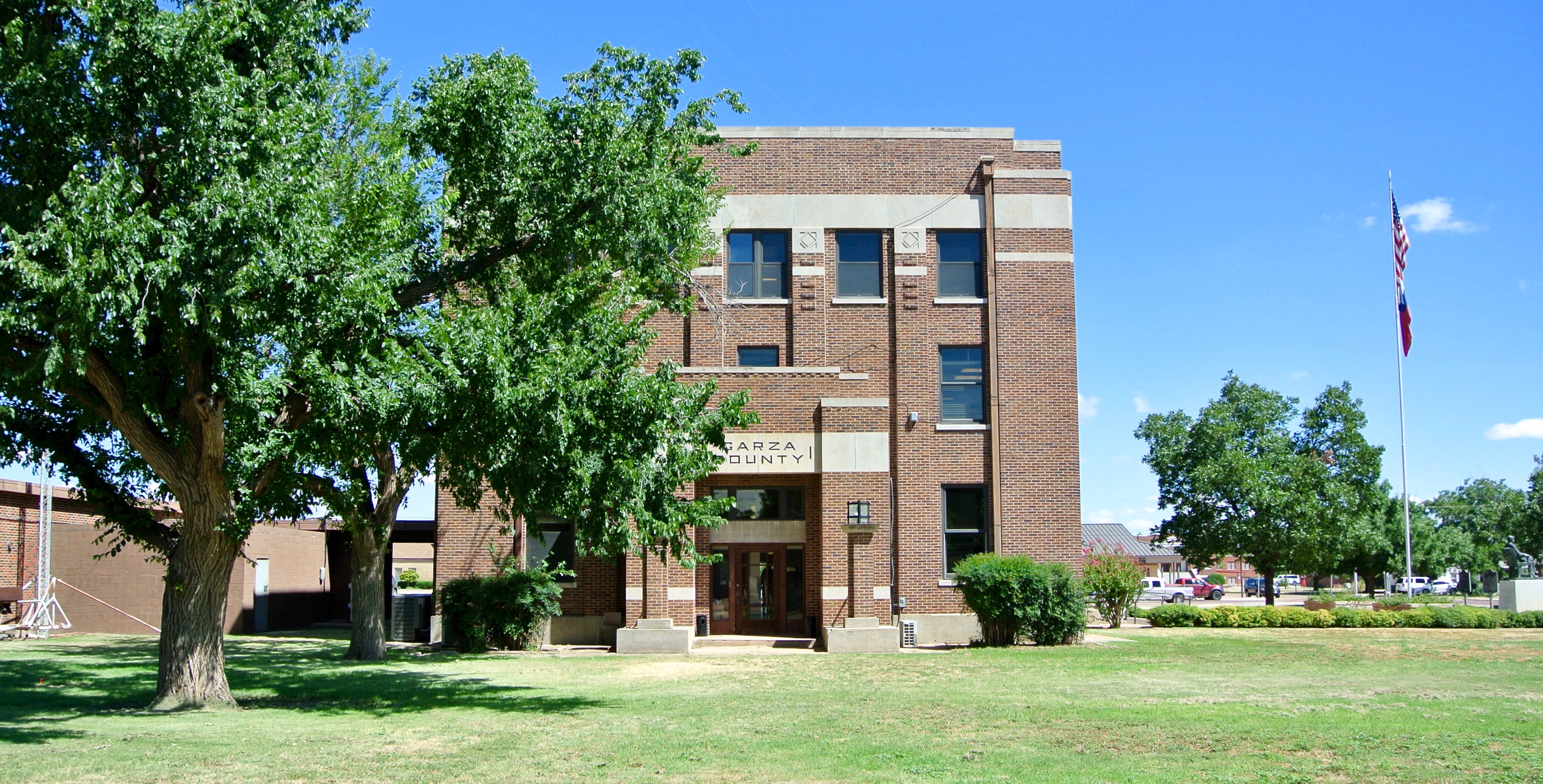 Here’s the southern façade across an empty lawn. 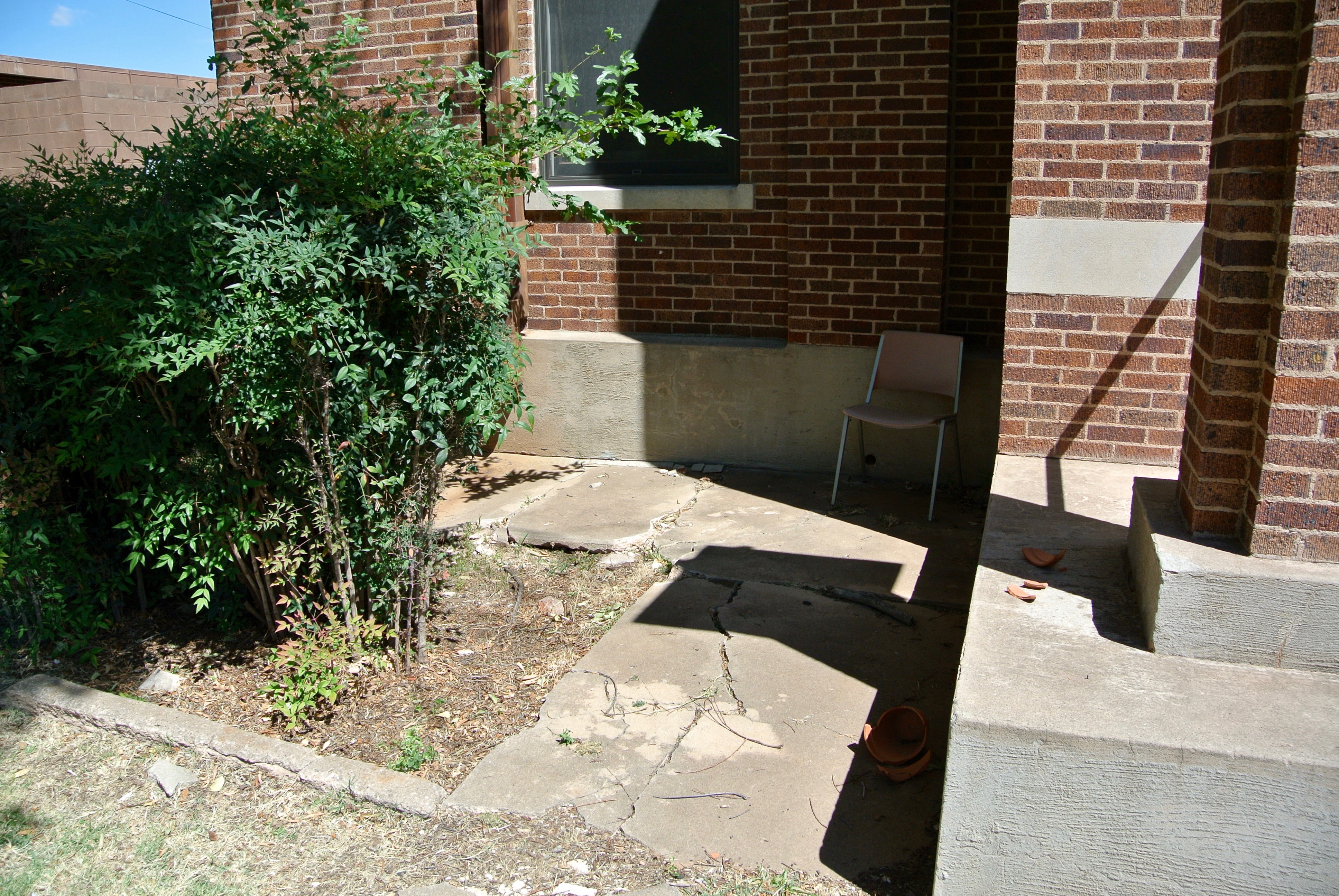 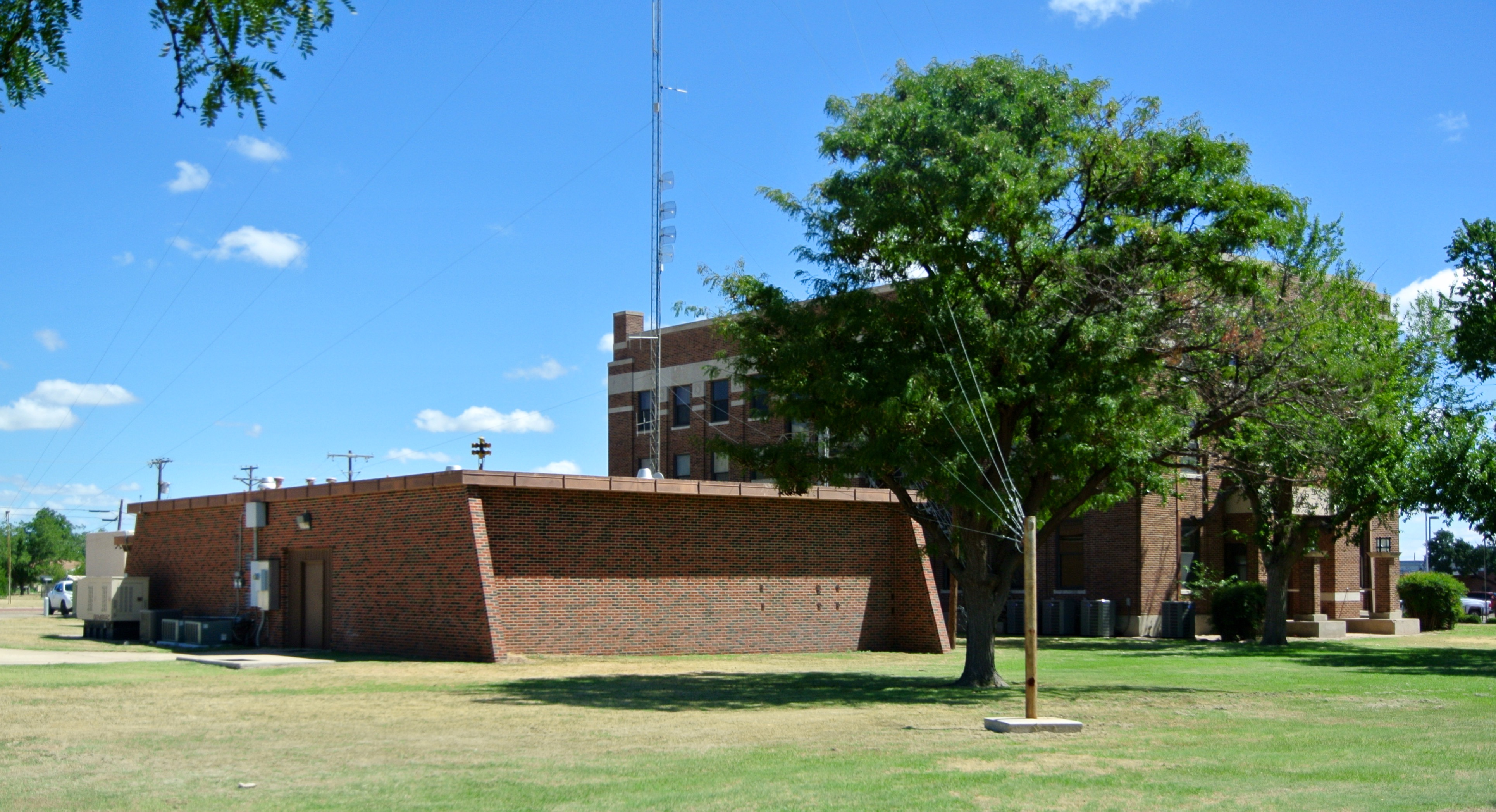 This addition is where you can find the Justice of the Peace, amid other officers. 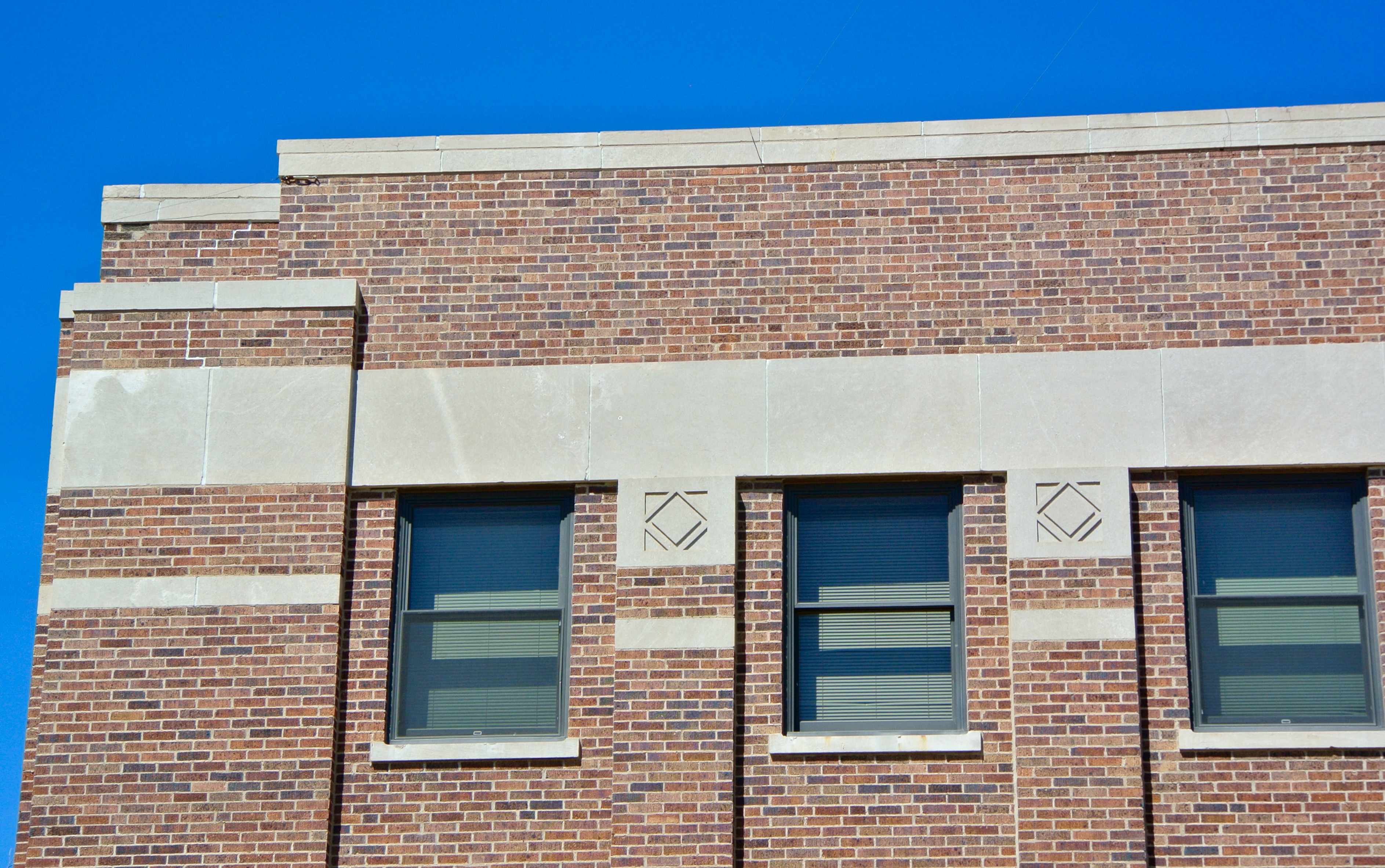 Gardening displays out front bear the marks of cattle brands, assumably local ones. 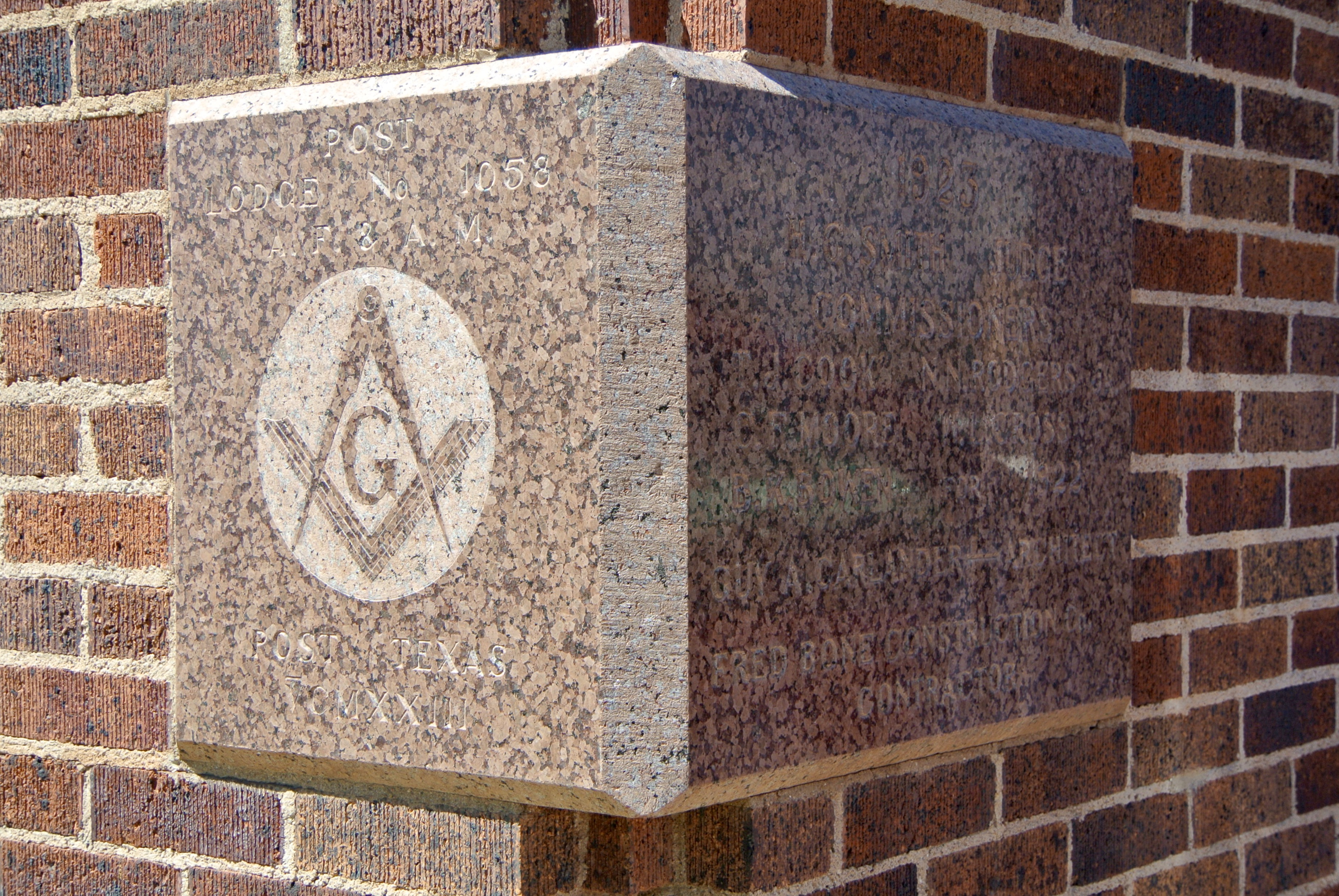 On the northeast corner 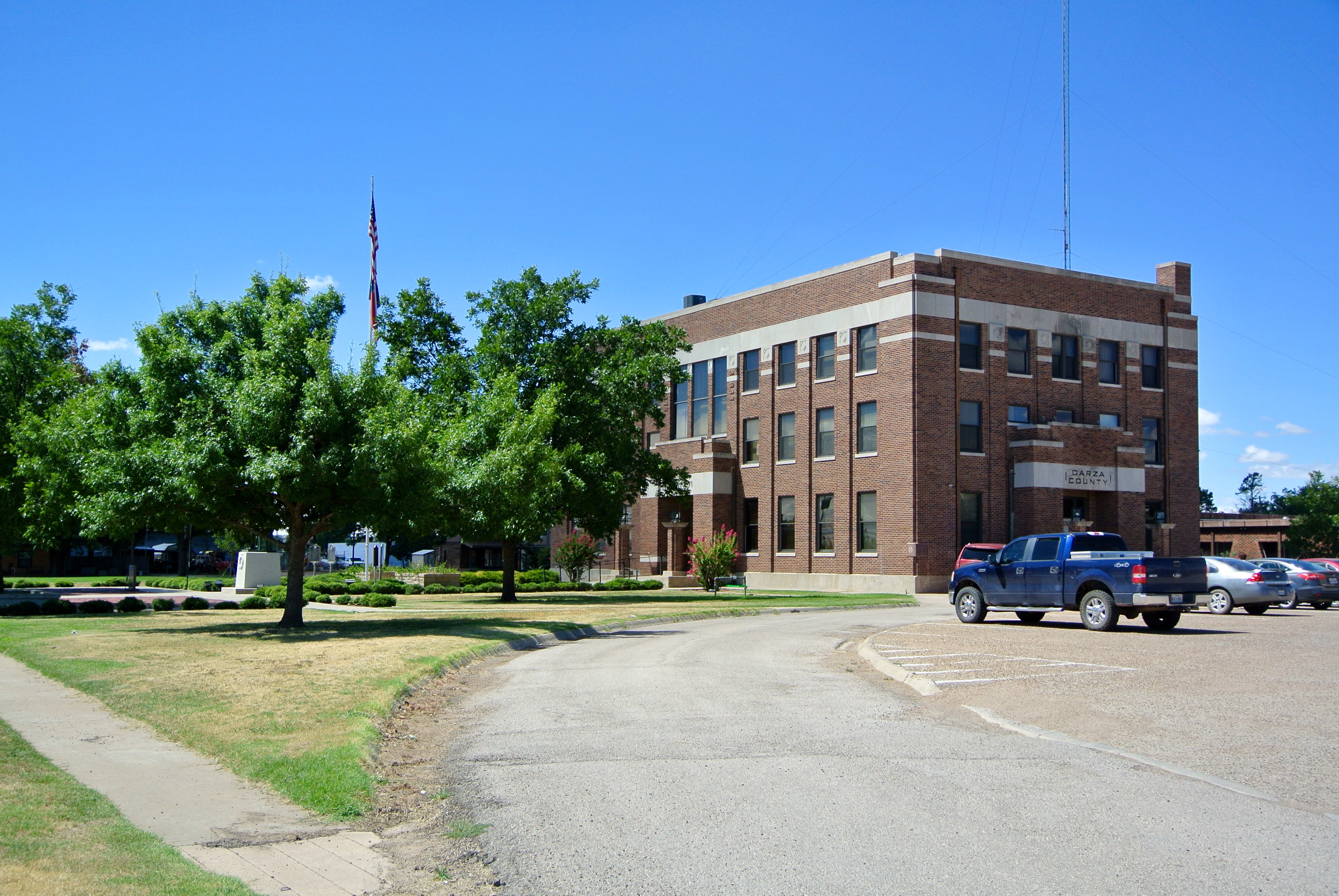 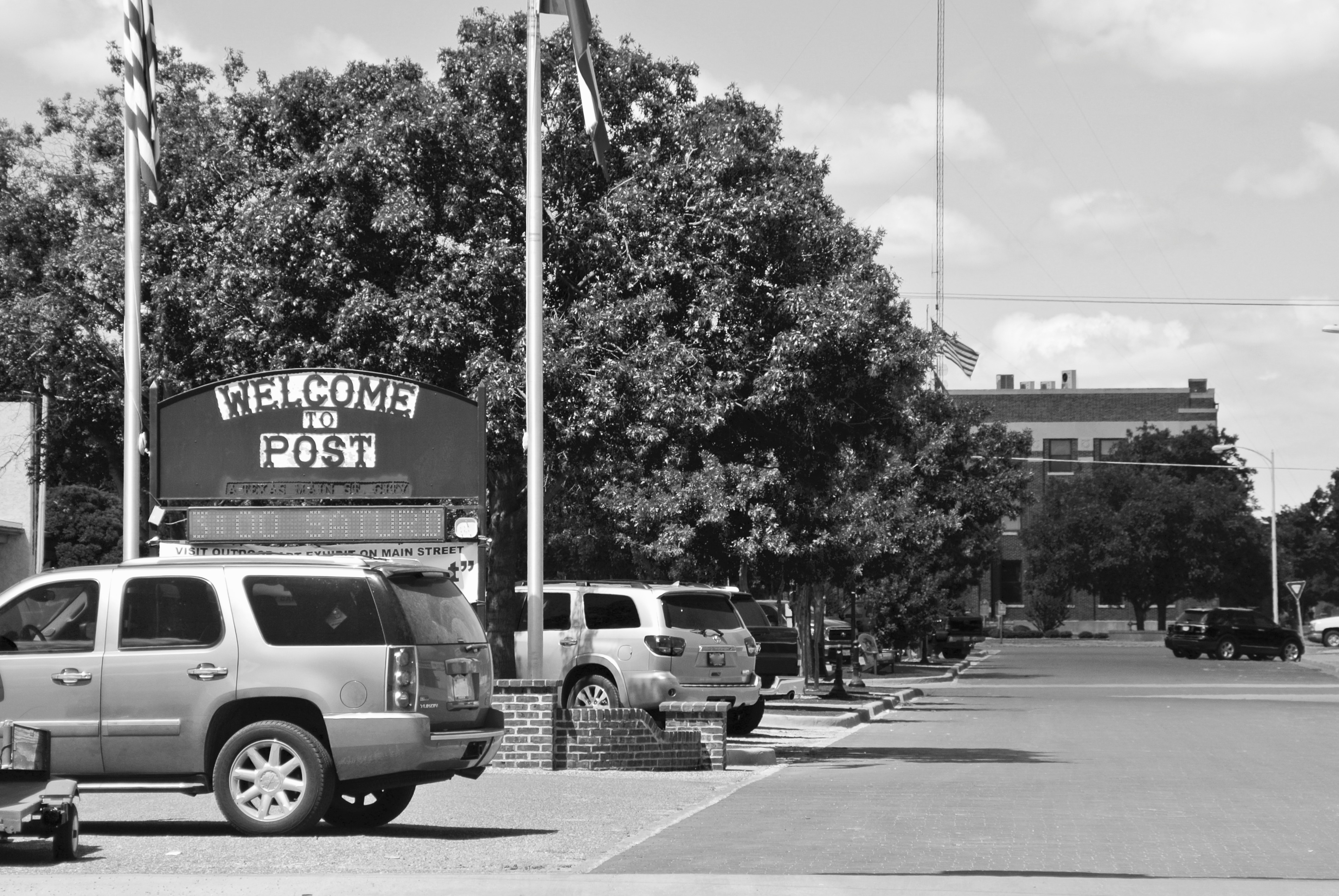 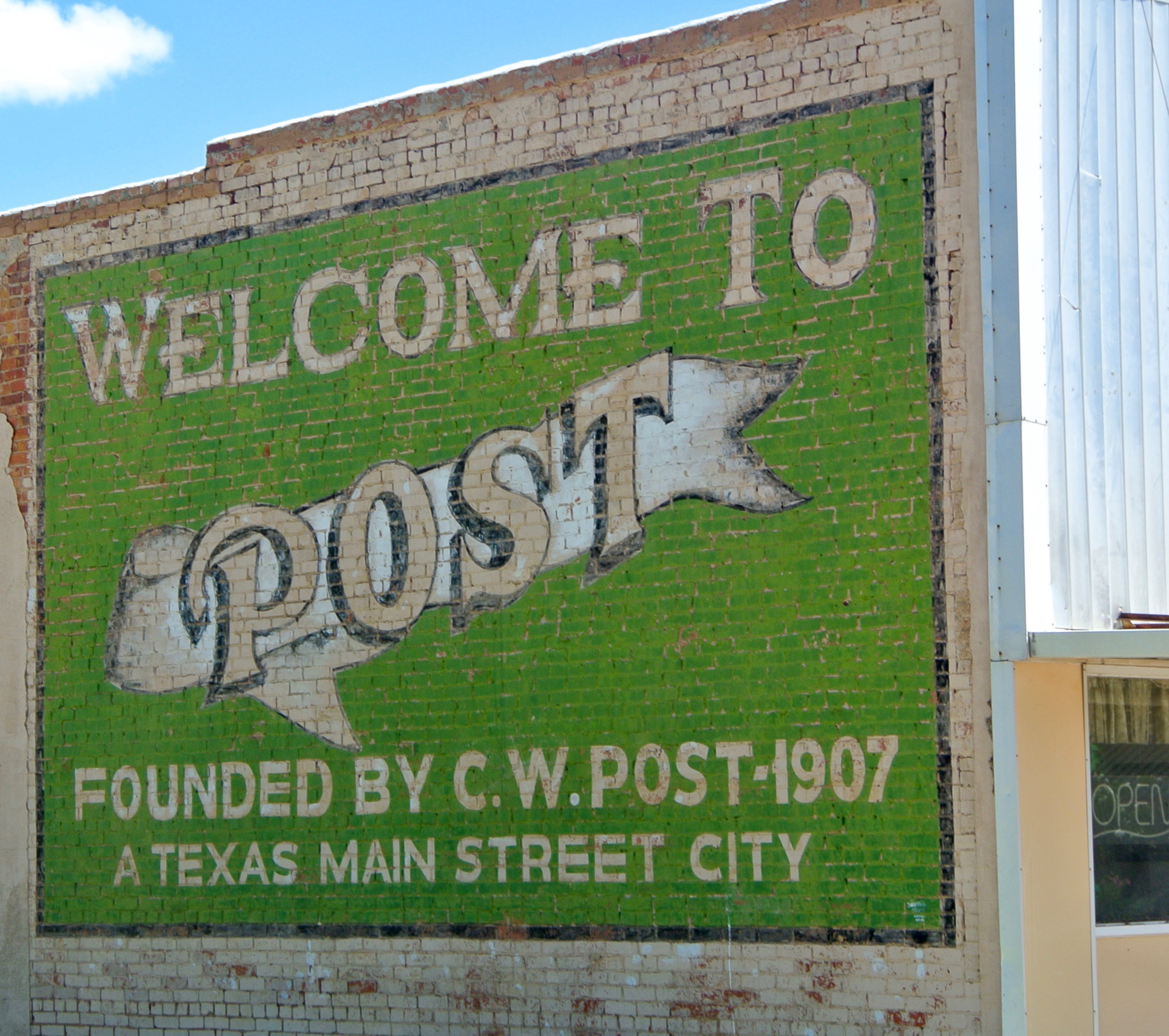 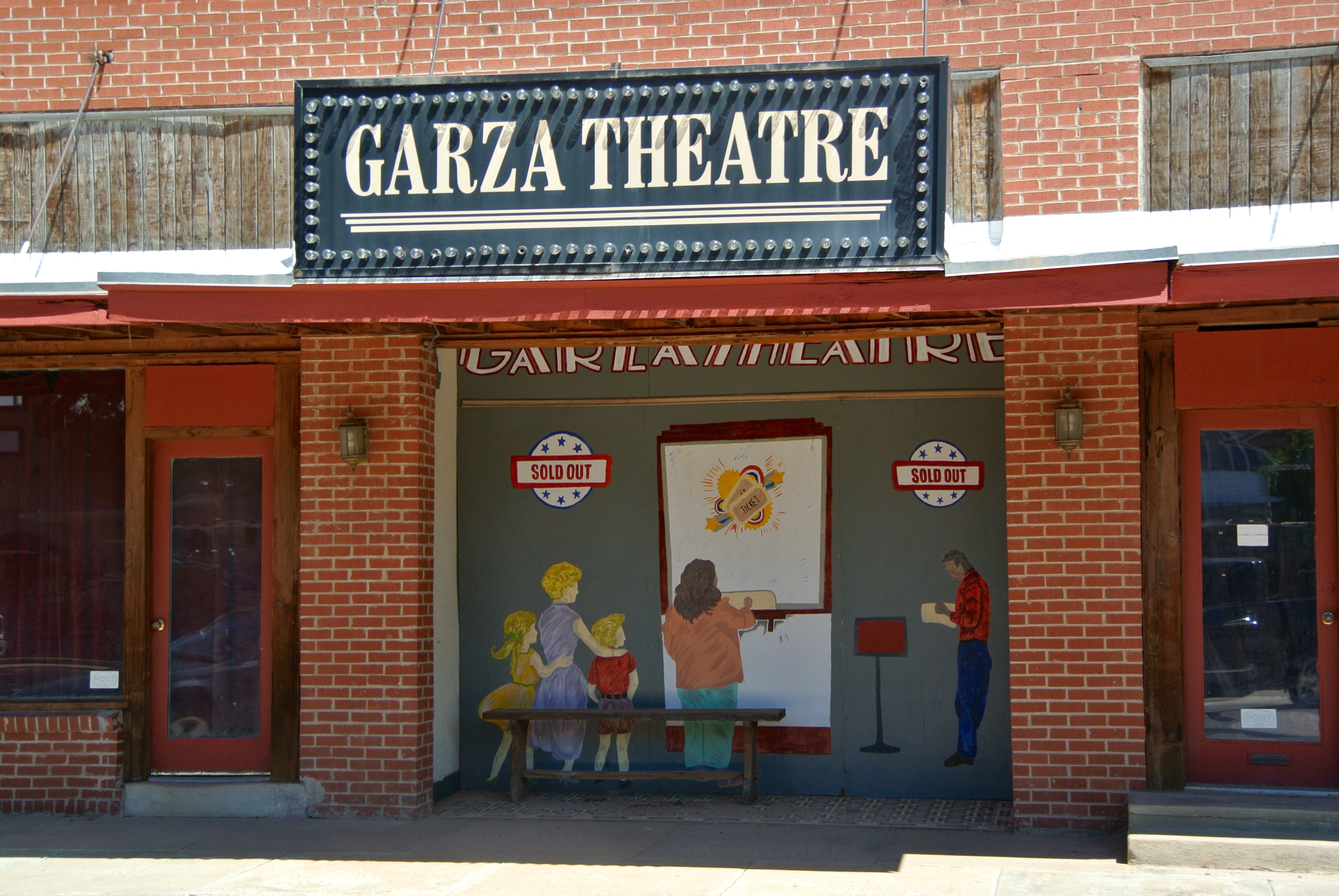 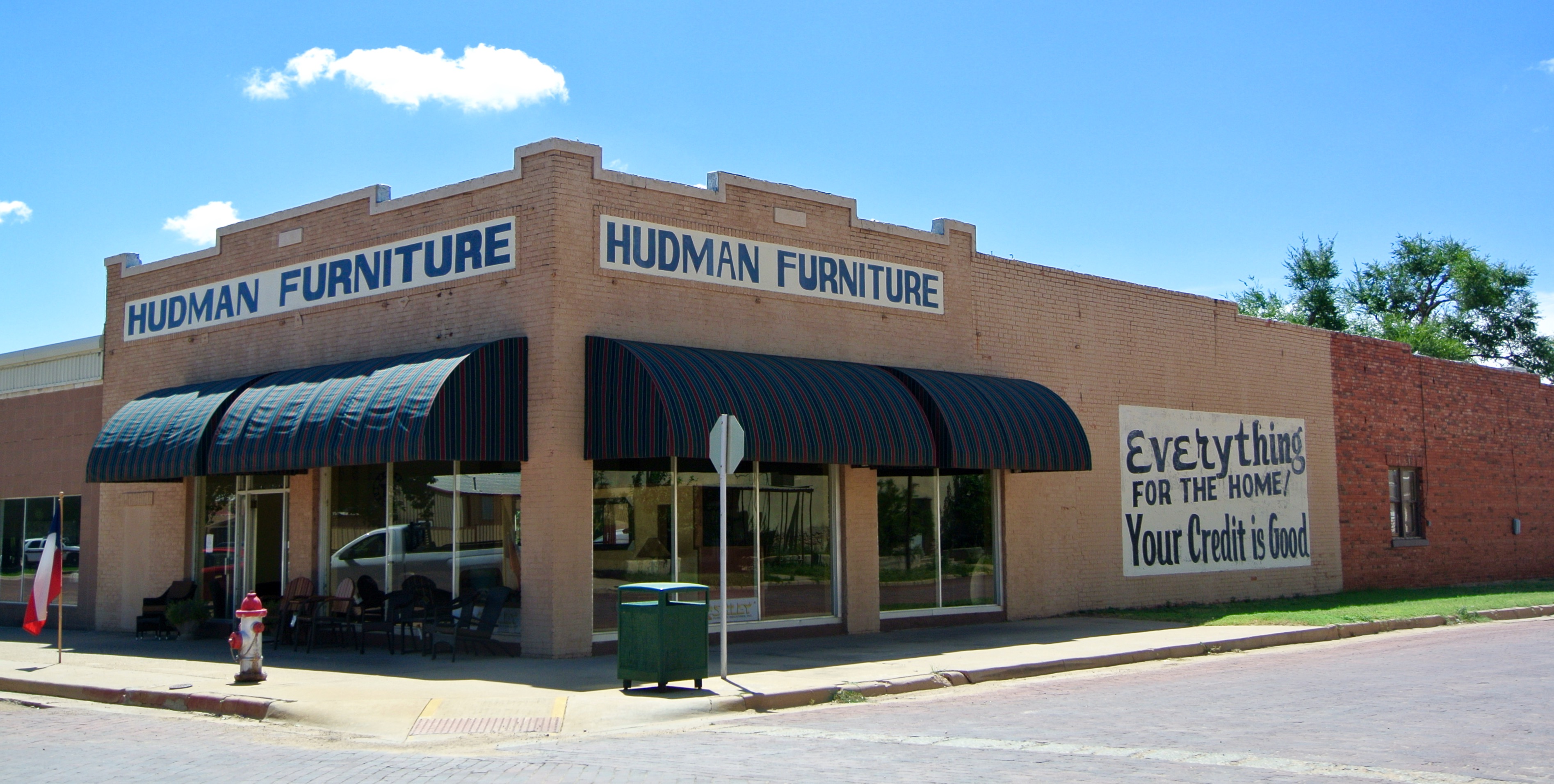 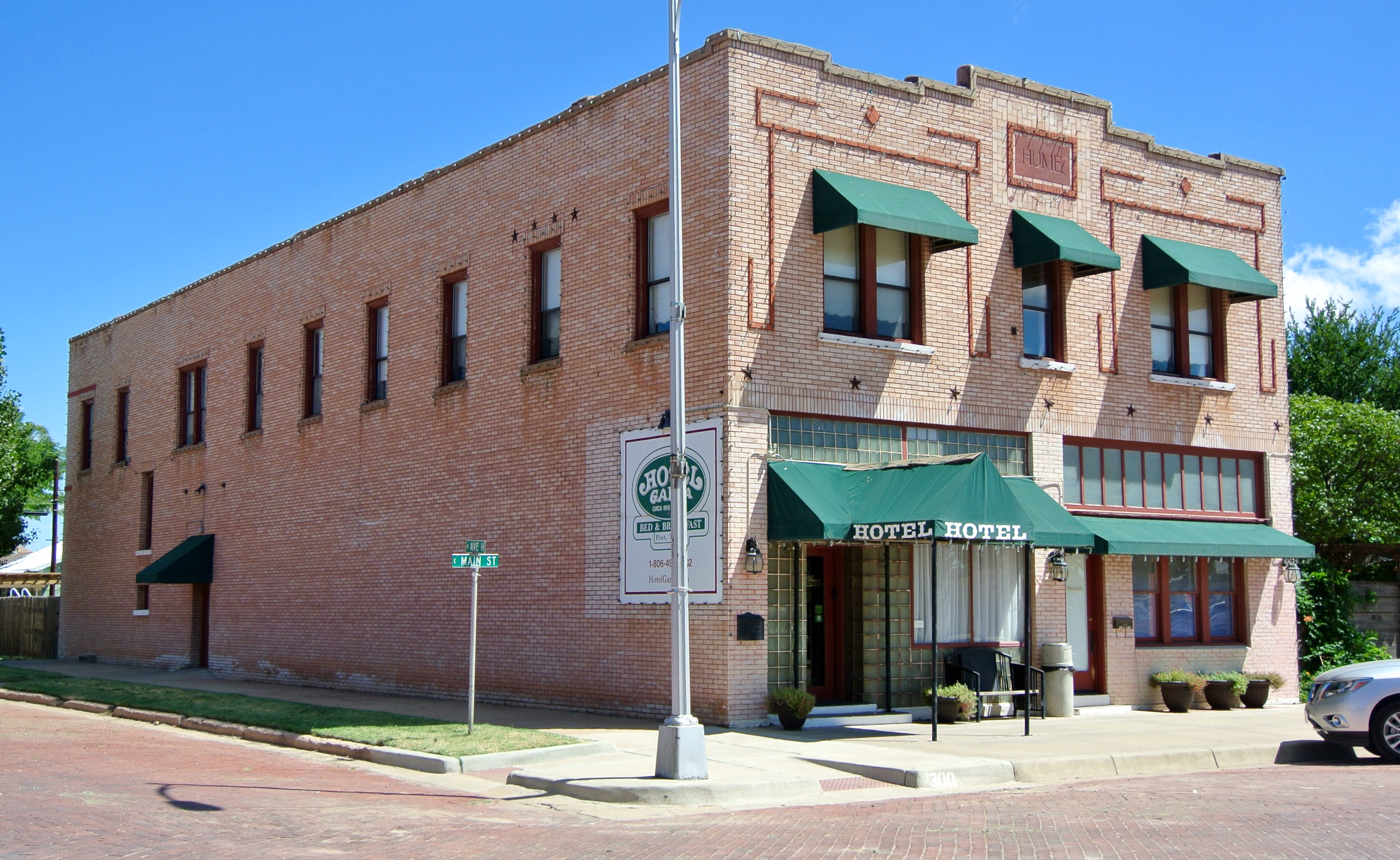 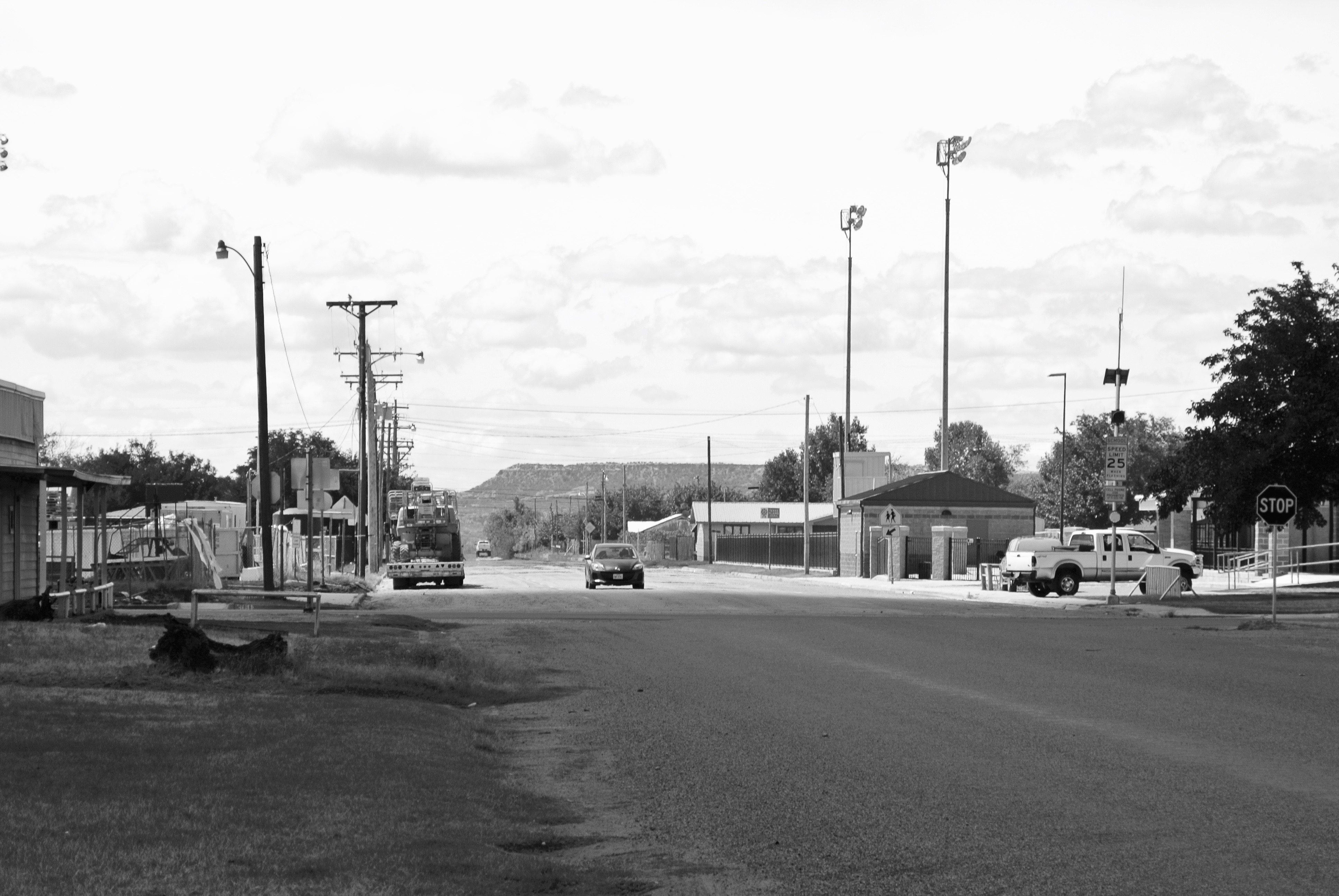 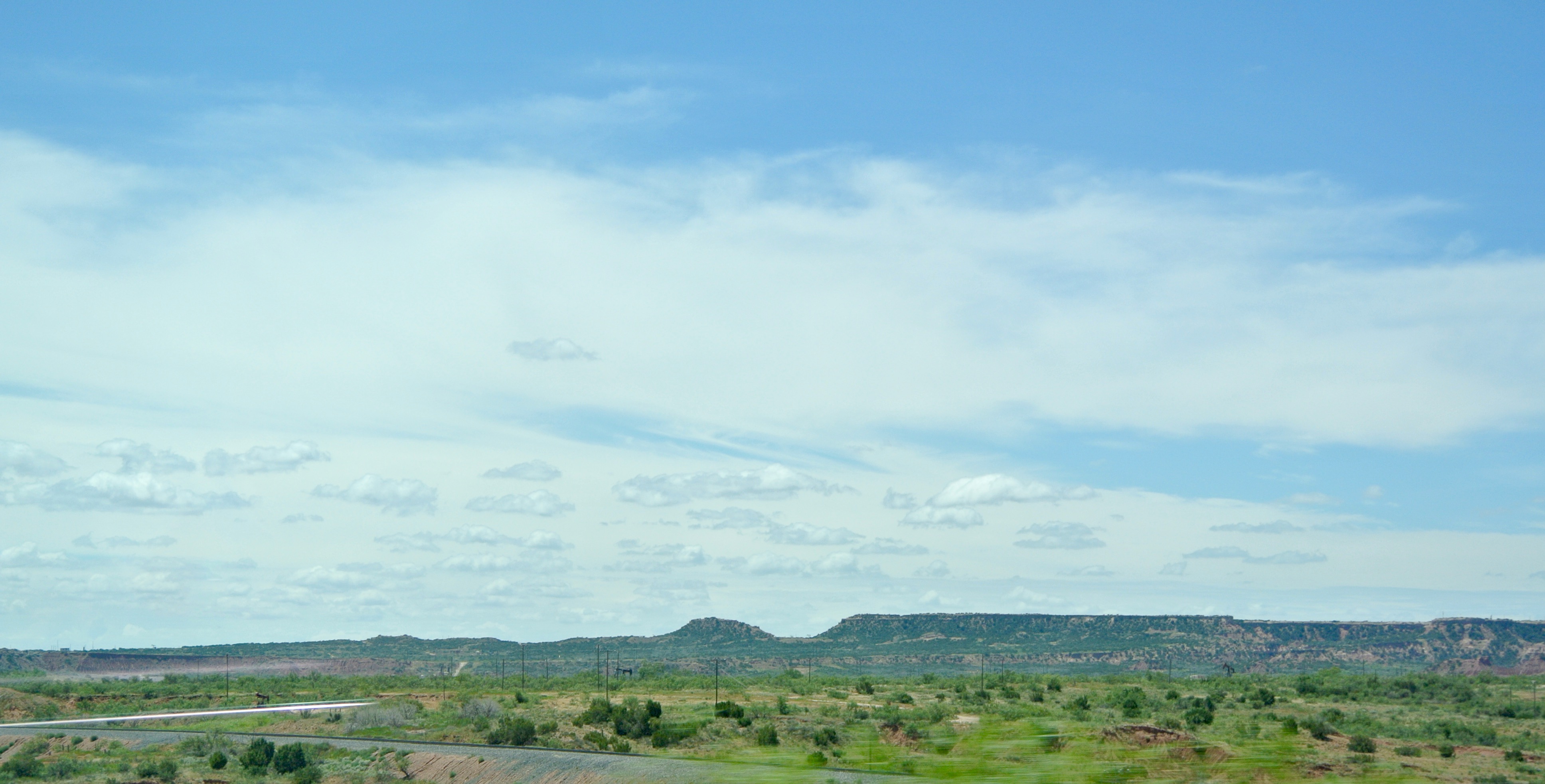 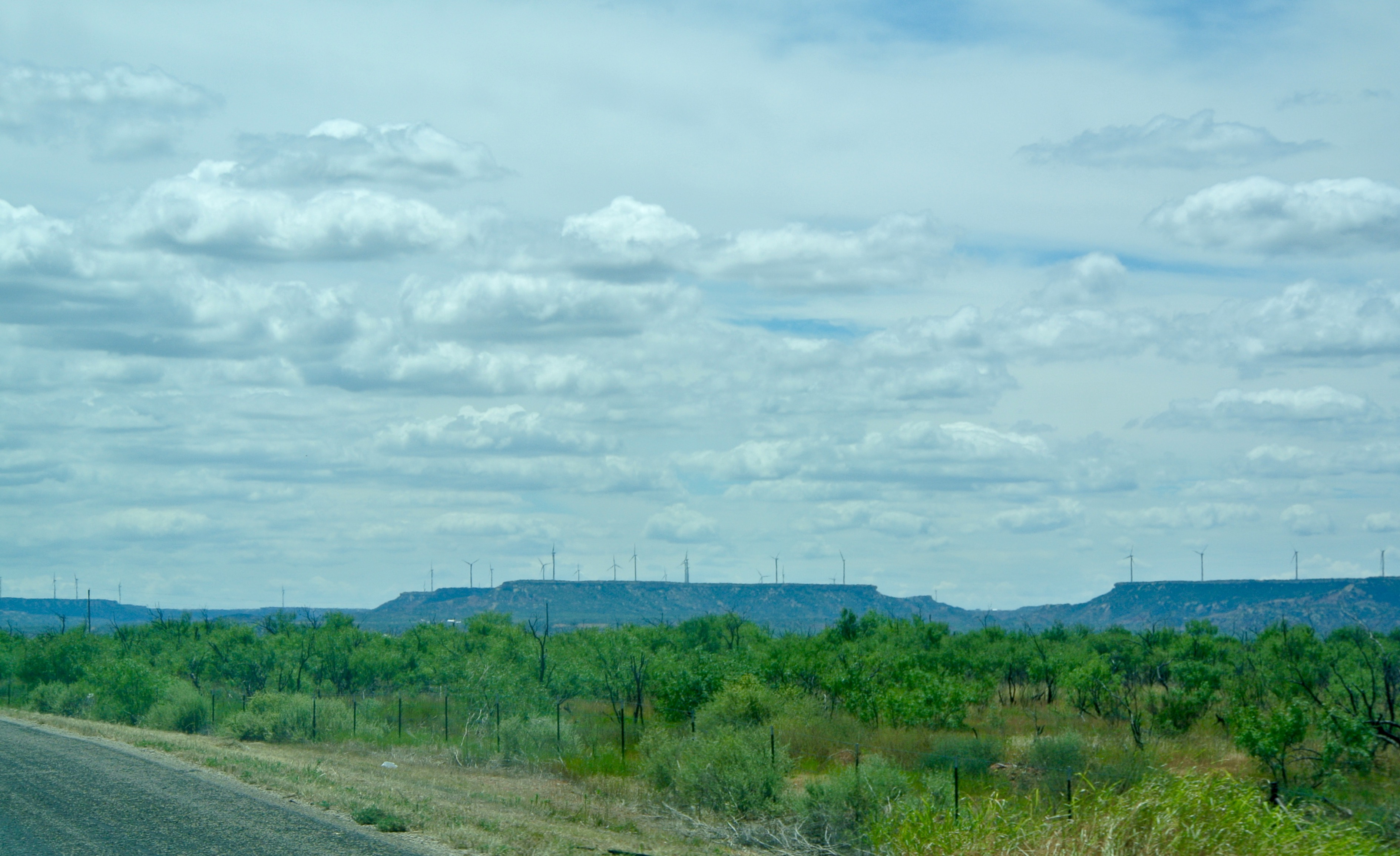 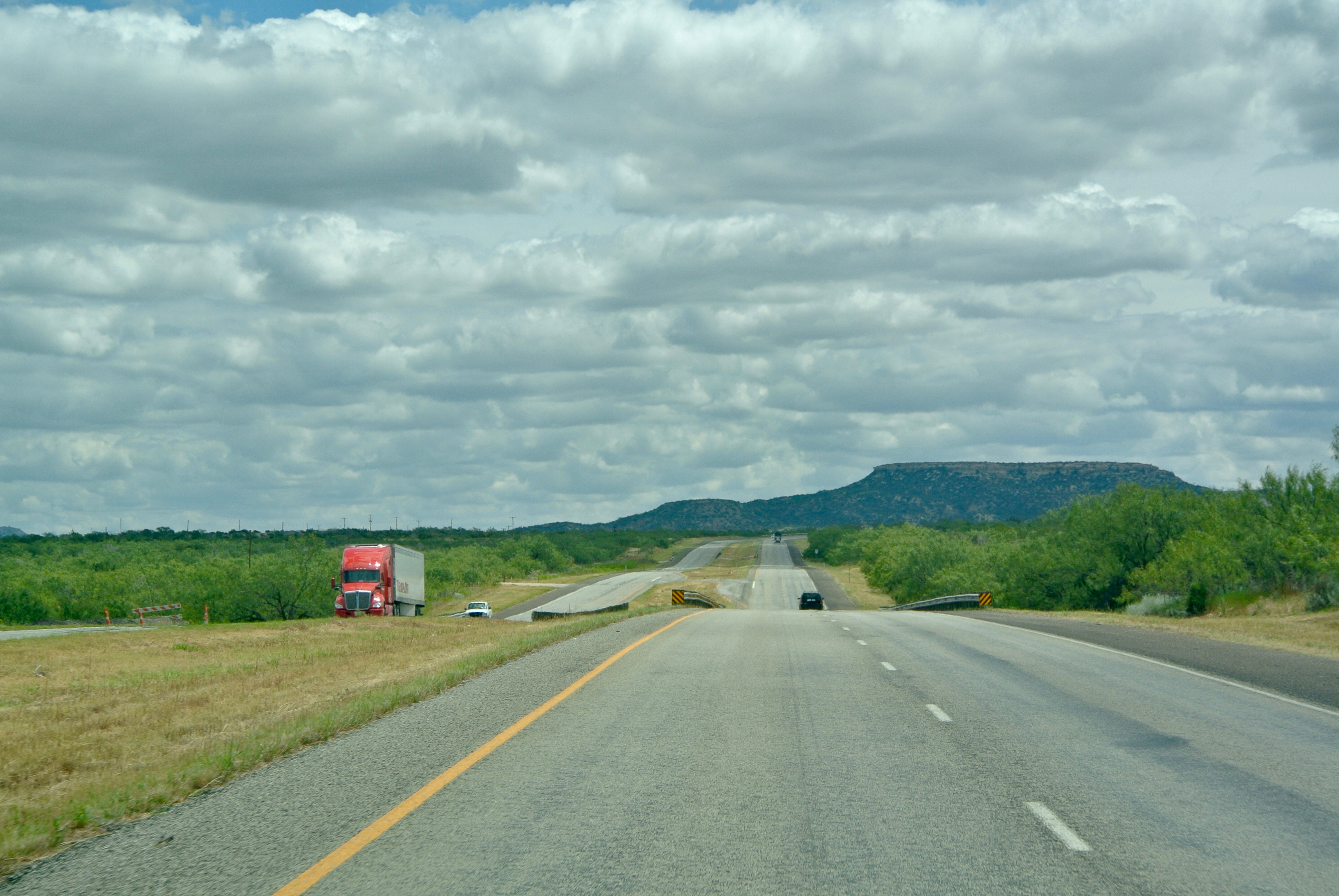