“After the Civil War a few buffalo hunters and ranchers moved to the region, but it was still only very sparsely settled when the county was organized in 1884. In the 1870s and 1880s rustling was among the principal industries, as thieves headed for Indian Territory crossed Hardeman County to reach the Red River. From 1881 to 1884 Wilbarger County administered Hardeman County’s legal affairs, though its handful of settlers had few administrative needs.”

“The 1880 population of Hardeman and Foard counties together totaled only fifty, but population increases in Hardeman County and adjacent regions justified organization in 1884 and a change in county lines some years later. Margaret, first called Argurita, was the original county seat. In 1885 the Fort Worth and Denver Railway made a survey through the area, and the site of Quanah was laid out. Since Margaret was across the Pease River from other settlements and from the railroad, an election held in 1890 made Quanah the county seat. As it was decided that a voter could establish residence by having his laundry done in a town for six weeks, all the railroad crews are said to have become citizens in time to vote for Quanah.”

“From 1875 to 1890 Hardeman County was principally a ranching area. In early years, before the construction of the railroad, cattlemen of the R2 Ranch, which covered thirty-five square miles of Hardeman County, and other ranchers drove their herds to Dodge City, Kansas. Cowboys picked up the Western (or Dodge City) Trail at Doan’s Crossing of the Red River, near Vernon. After the completion of the railroad in 1887, Quanah emerged as an important shipping point for the surrounding area.”

“Lured by the promise of abundant, inexpensive land, large numbers of new settlers began pouring in during the late 1880s. Between 1880 and 1890 the population of Hardeman county grew nearly a hundredfold, from forty-nine to 3,904. Many of the settlers were farmers, who began to till and fence the land. In the eastern part of the county they were planting wheat by 1889 and producing oats and wheat in substantial amounts by 1890.”

“Higher than average rainfall, good weather, and soaring commodities prices induced some farmers to plow immense stretches of raw prairie for planting. But in 1892 prices fell dramatically, and the following year the entire crop failed. For much of the rest of the decade, Hardeman County farmers struggled. Between 1890 and 1900 the population fell from 3,904 to 3,634, as many discouraged farmers moved away. The number of farms also dropped during the same period, from 373 to 262. The economy, however, began to recover at the turn of the century, in part because of the introduction of large-scale cotton culture.”

“After 1900 the population also began growing rapidly again. In 1903 the St. Louis-San Francisco Railway was built to Quanah from Oklahoma City, giving the county direct access to St. Louis and points east, and in 1910 the Quanah, Acme and Pacific Railroad opened a rail link with the West. The construction of the railroads fostered more new settlement, particularly in the western part of the county. Between 1900 and 1910 the population rose from 3,634 to 11,213. The number of farms also grew dramatically, from 262 in 1900 to 1,068 in 1910.”

“During the early years of the century grain and cotton were the principal agricultural products in Hardeman County, but from 1910 to 1920 there was a pronounced shift from corn and oats to wheat. In 1920 county farmers raised 871,134 bushels of wheat, making the county one of the leaders in the state in wheat culture. Cotton also continued to be grown in large amounts. In 1926 more than 50,000 bales were ginned in the county, and production levels continued to be high through the end of the 1920s. Droughts, boll weevil infestations, and falling prices, however, combined to drive down cotton production in the 1930s.”

“As a result of poor crop yields and the reluctance of banks to extend credit to financially strapped farmers, many of those who made a living from the land, particularly tenants, found themselves in a precarious position. Numerous farmers were forced to give up their livelihood and seek work elsewhere. Between 1930 and 1940 the number of farms in the county fell by almost a third, and by 1940 only slightly more than half the number of tenants of a decade before-566 of 946-were still on the land.”

“The economy began to recover during World War II, partly as a result of the discovery of oil in 1944, which helped many cash-poor farmers to settle long-standing debts. Cotton farming continued to decline after the war, and by the 1960s only six gins were in operation, in contrast to the high of sixteen in the early 1930s. Subsequently wheat was the leading crop. The yield reported by the agricultural census of 1982, 1,915,320 bushels, placed Hardeman County near the top of wheat-producing counties in the state. Much of the western part of the county is ranching country, with cattle the leading revenue producer, followed by sheep, goats, and horses.”

“In 1886, Hardeman County, was planning a courthouse, but with a bit of contrivance. Two years earlier, the town of Margaret had been selected as the county seat of Hardeman, but not without opposition from the town of Quanah. In early 1886, rumors were heard that the Ft. Worth and Denver Railroad planned to extend a line from Ft. Worth to Quanah. The citizens of Margaret were provoked at the news and decided to solidify their position as county seat by erecting a costly courthouse and they immediately budgeted $40,000 for the project. The meeting deciding this was on February 11, 1886 and a week later, plans submitted by JEF [(James Edward Flanders)] were accepted and the court began advertising for bids to construct the building. When word reached Quanah, the townspeople were literally up in arms and confronted the commissioners at Margaret. On April 7, the court met and formally rescinded the order to build the courthouse. At the same time, they ordered that Flanders receive his fee for the plans and specifications. It was not until 1890 that Quanah became the county seat.” - James Edward Flanders Dallas’ First Architect 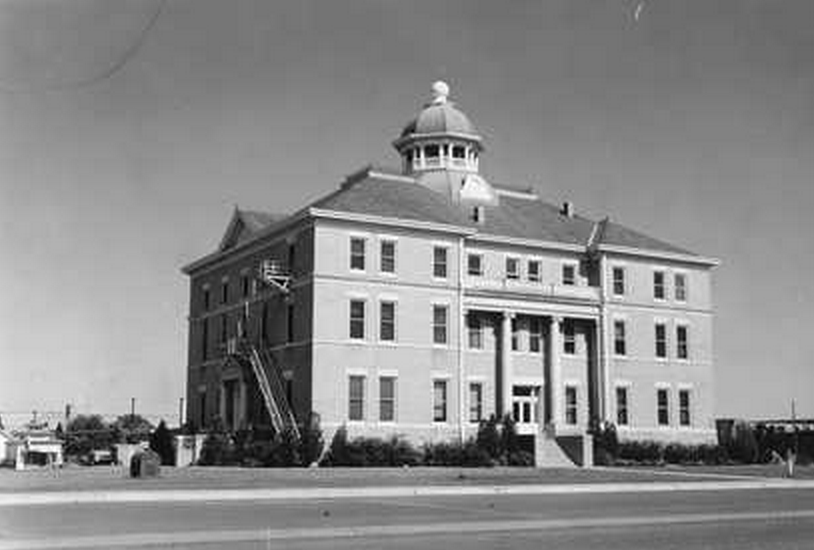 “A 1906 bond election secured funds for the construction of a new building to replace the 1890 county courthouse. The Commissioners Court selected architect R. H. Stuckey of Chillicothe and Tom Lovell & Sons of Denton to design and construct the building, respectively. Stuckey used a domed cupola, stone lintels over the windows, and ionic columns flanking the entryways to execute his Neoclassical design for the courthouse. Built of glazed tan brick with a raised basement of Indiana limestone, it was completed in 1908. Since its construction, the Hardeman County Courthouse has served as the center of politics and government for county residents. The square is a focal point for local festivals and community events. An anchor in Quanah’s downtown historic district, the 1908 courthouse continues as a significant part of the community’s architectural heritage.” – Hardeman County Courthouse Historical Marker

The building’s appearance, circa 2008

The courthouse underwent a recent THC program to restore it back to its 1908 look. 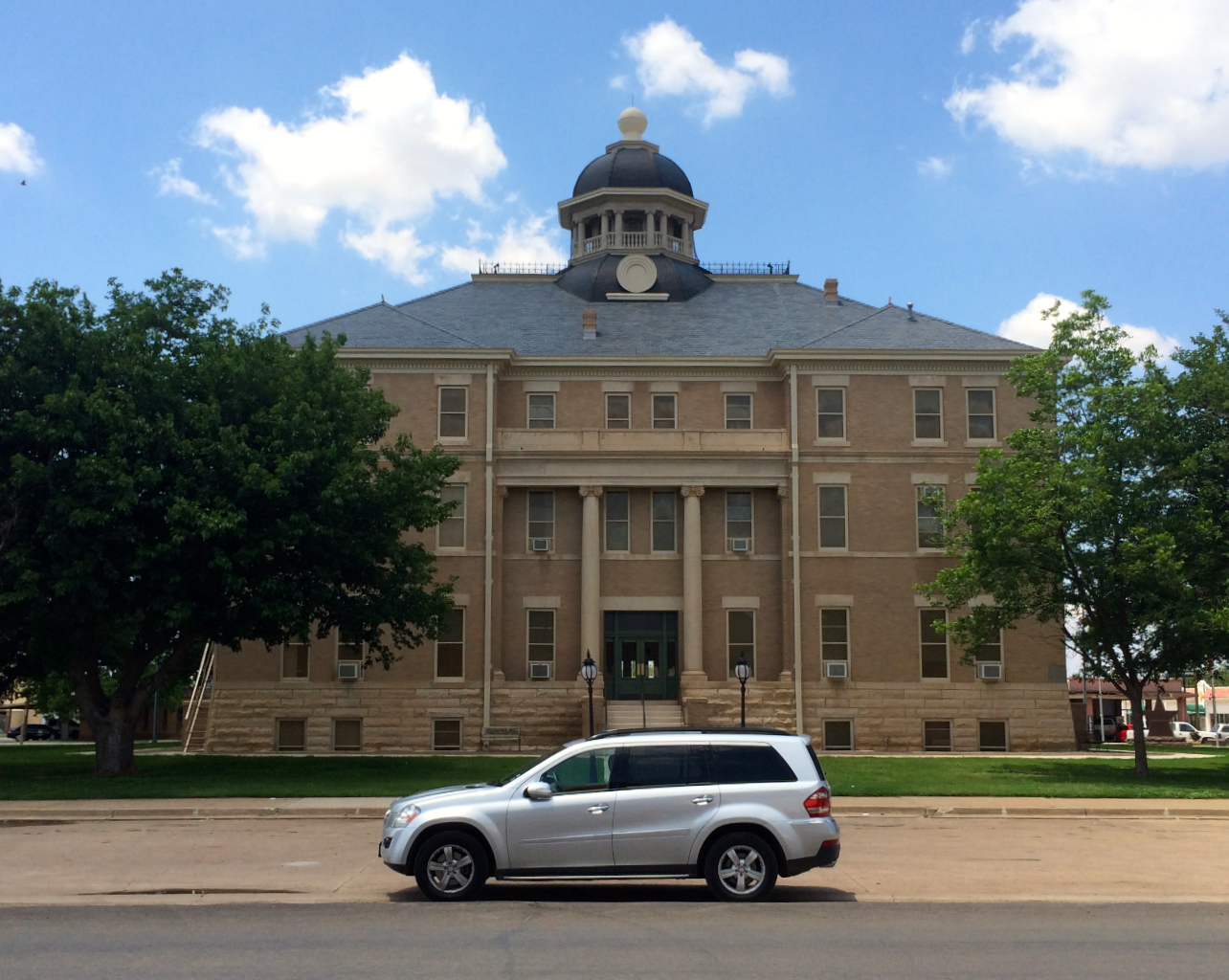 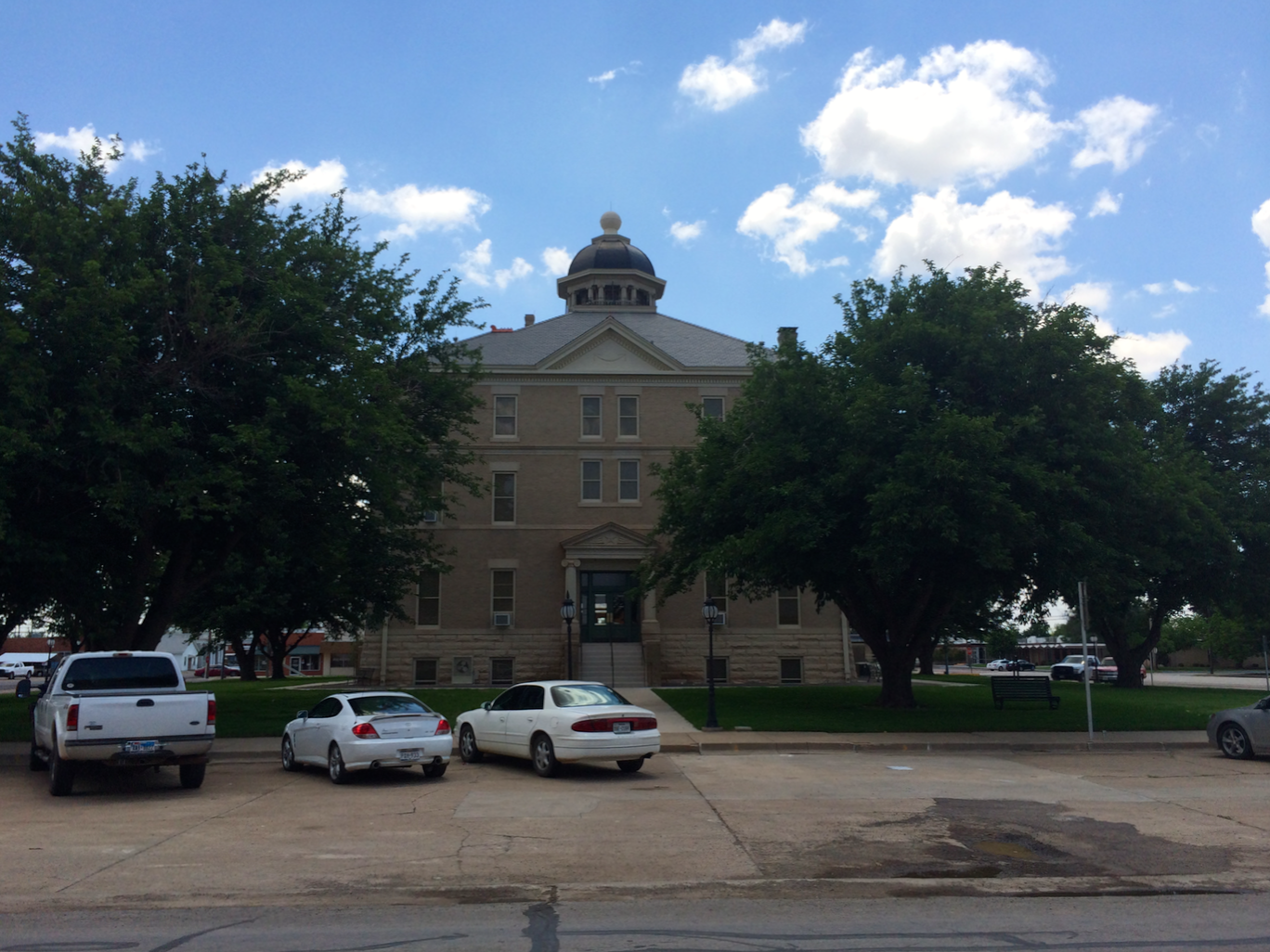 The courthouse seems to smile after its THC renovation. 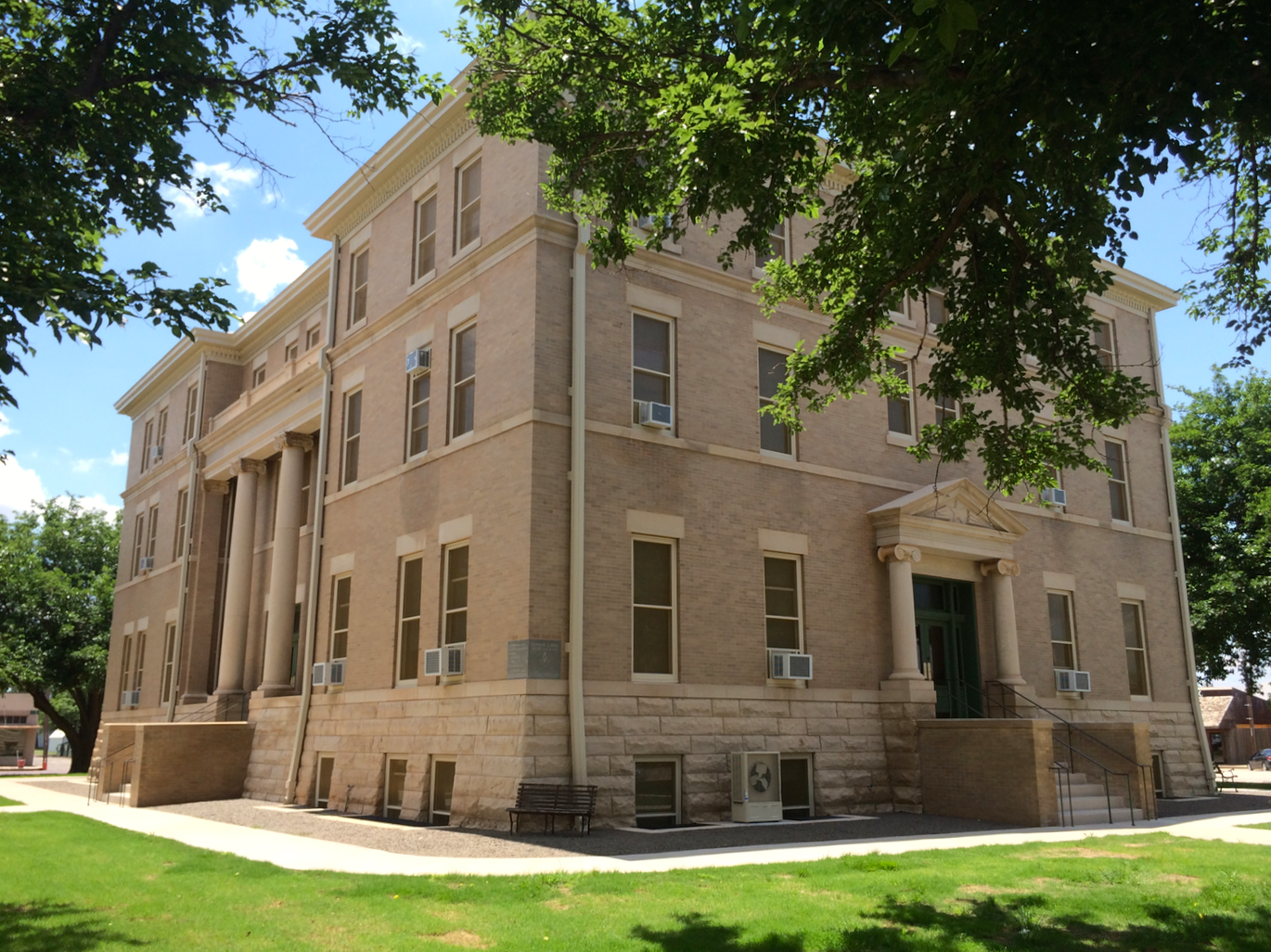 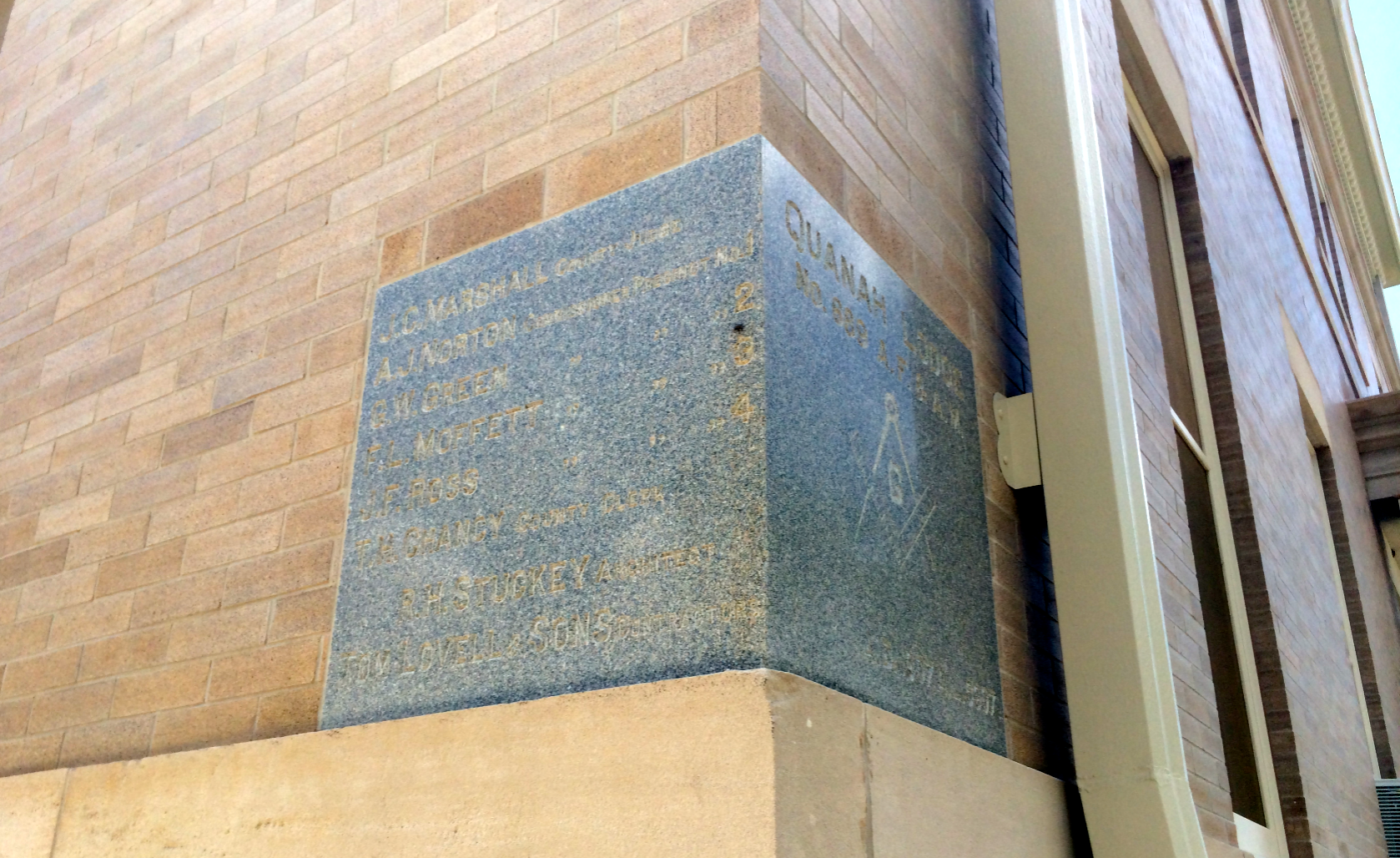 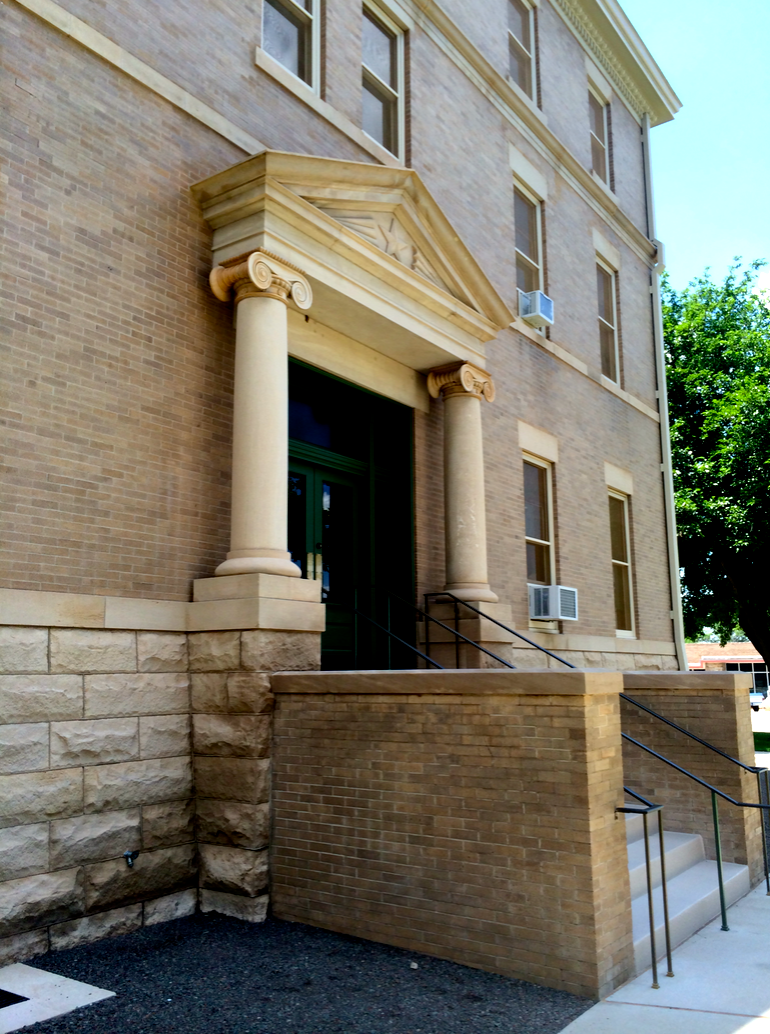 The northern, souther, and western entrances feature “toned-down” Ionic columns, different from the much grander versions in front of the eastern doors. 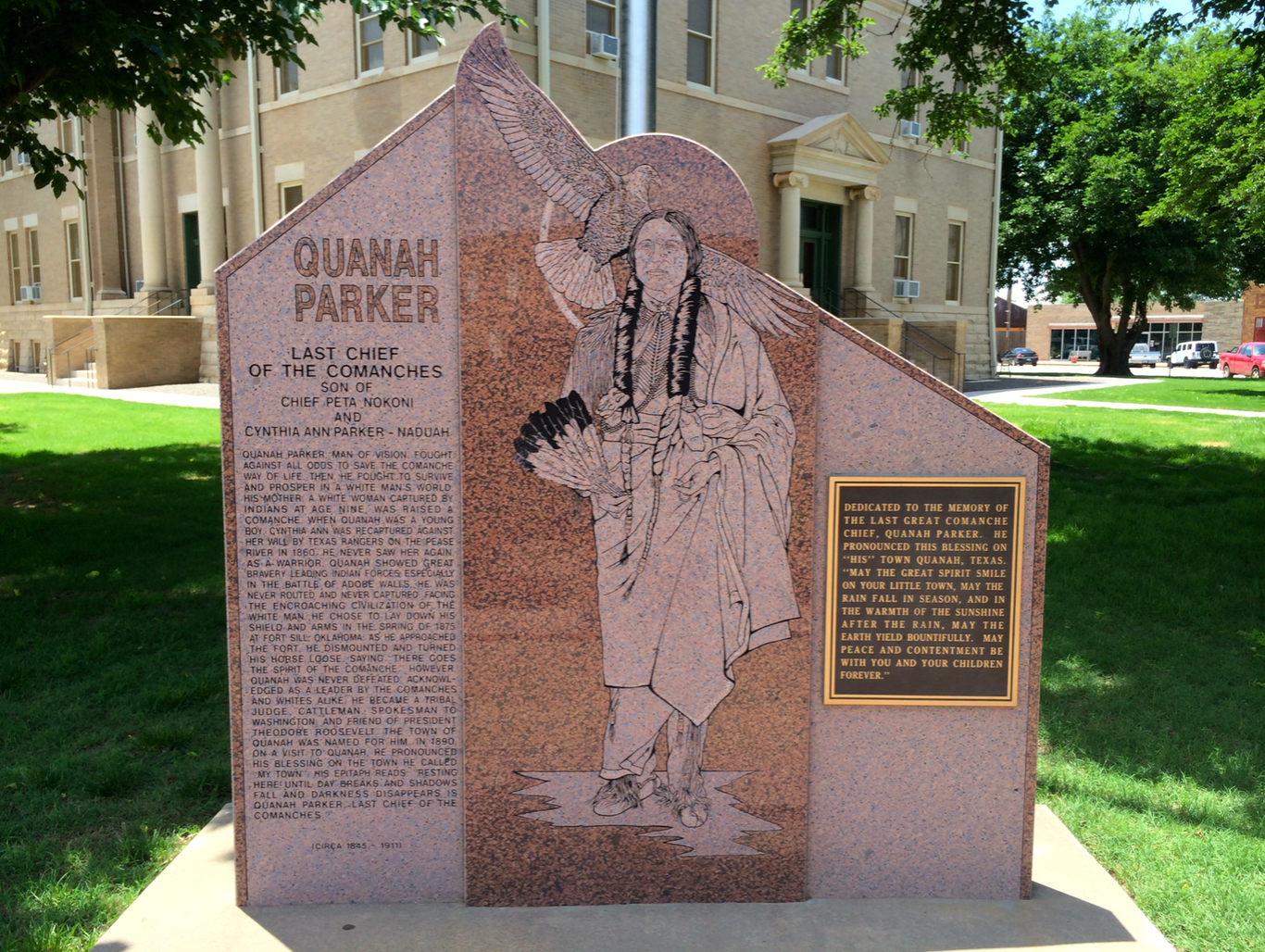 A memorial honors city namesake, Quanah Parker on the northeast corner of the courthouse lawn.

The southern side of the courthouse contains the fire escape. 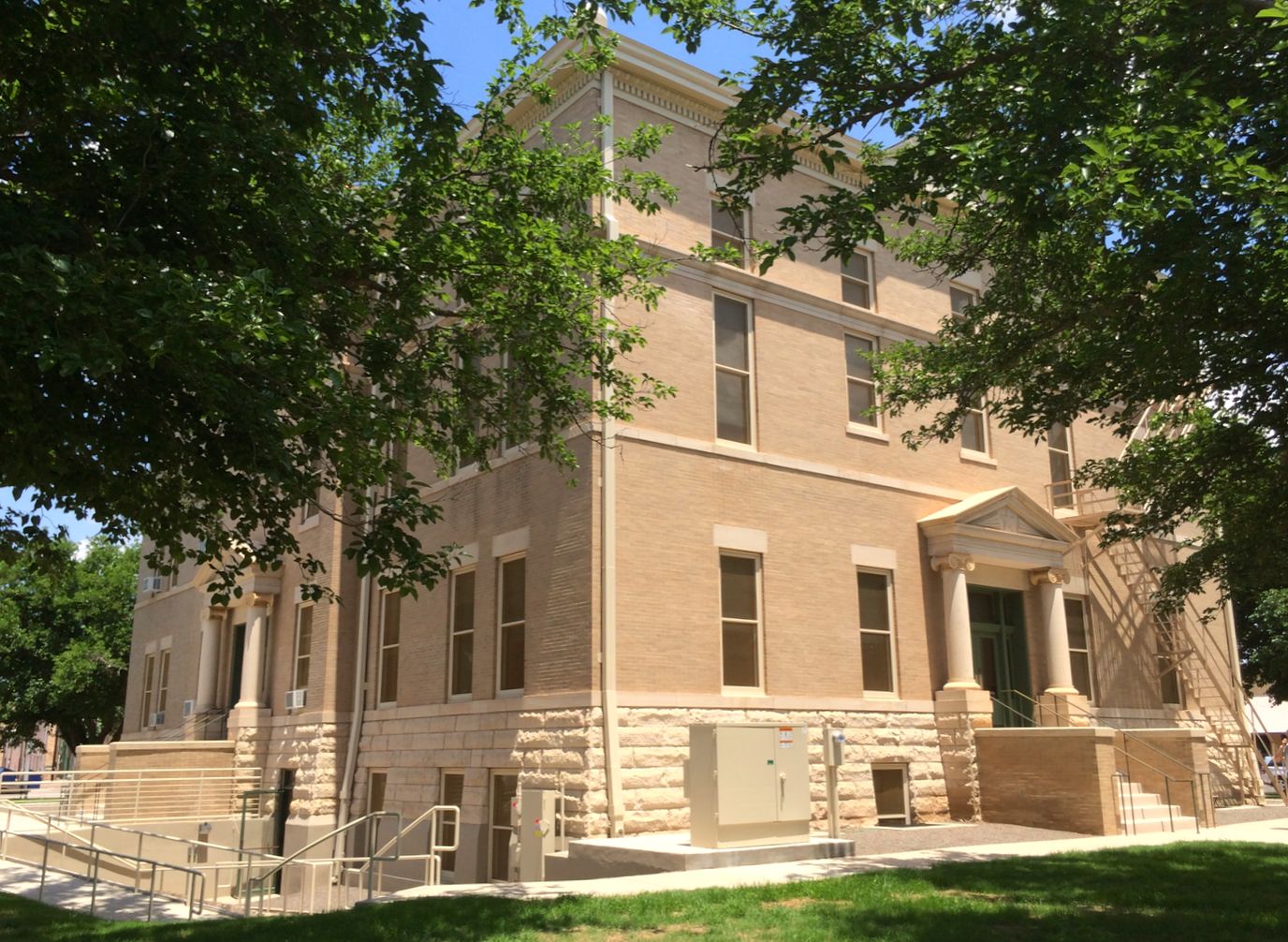 The handicap-accessible entrance on the western side 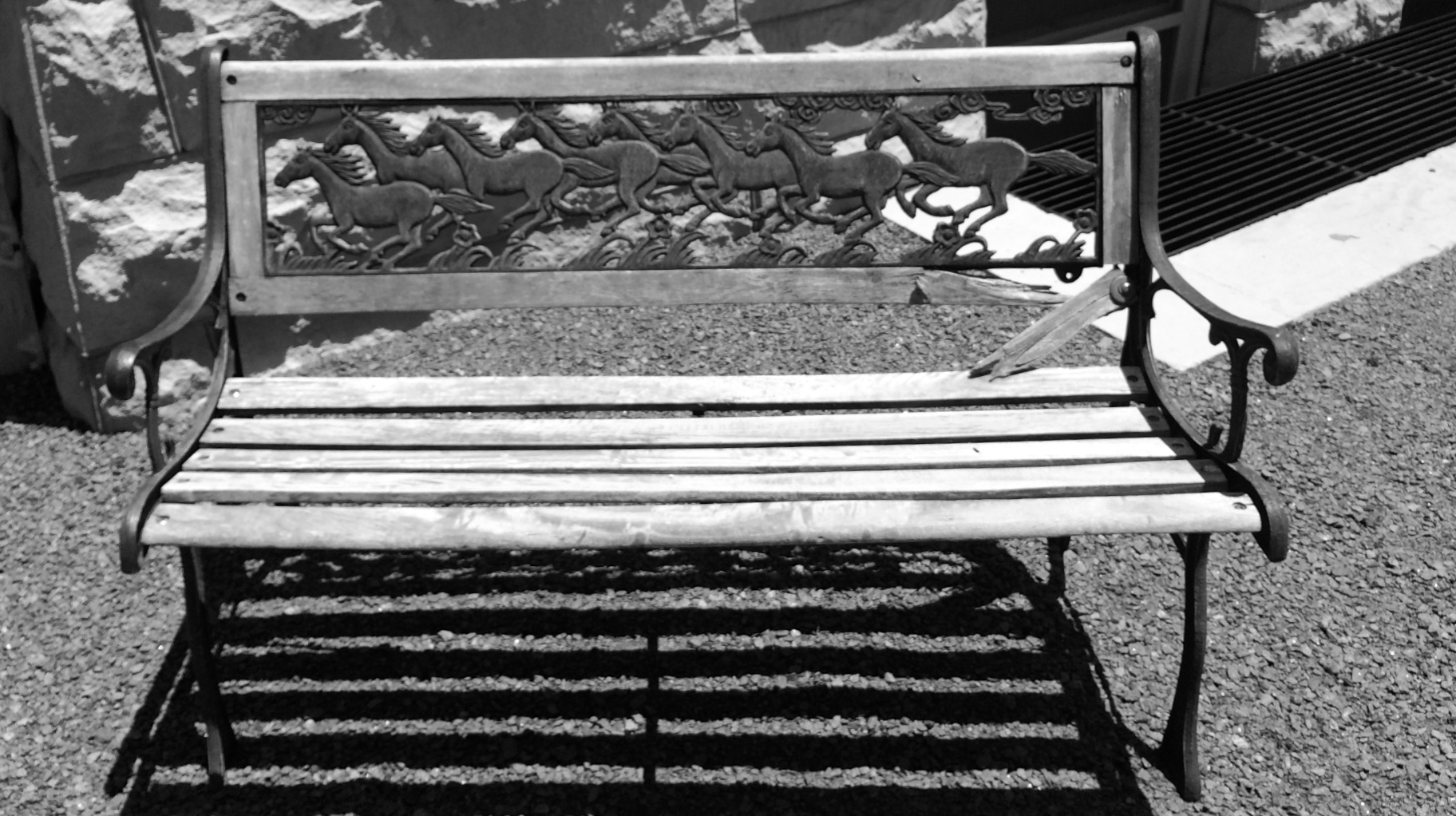 An interesting bench nearby 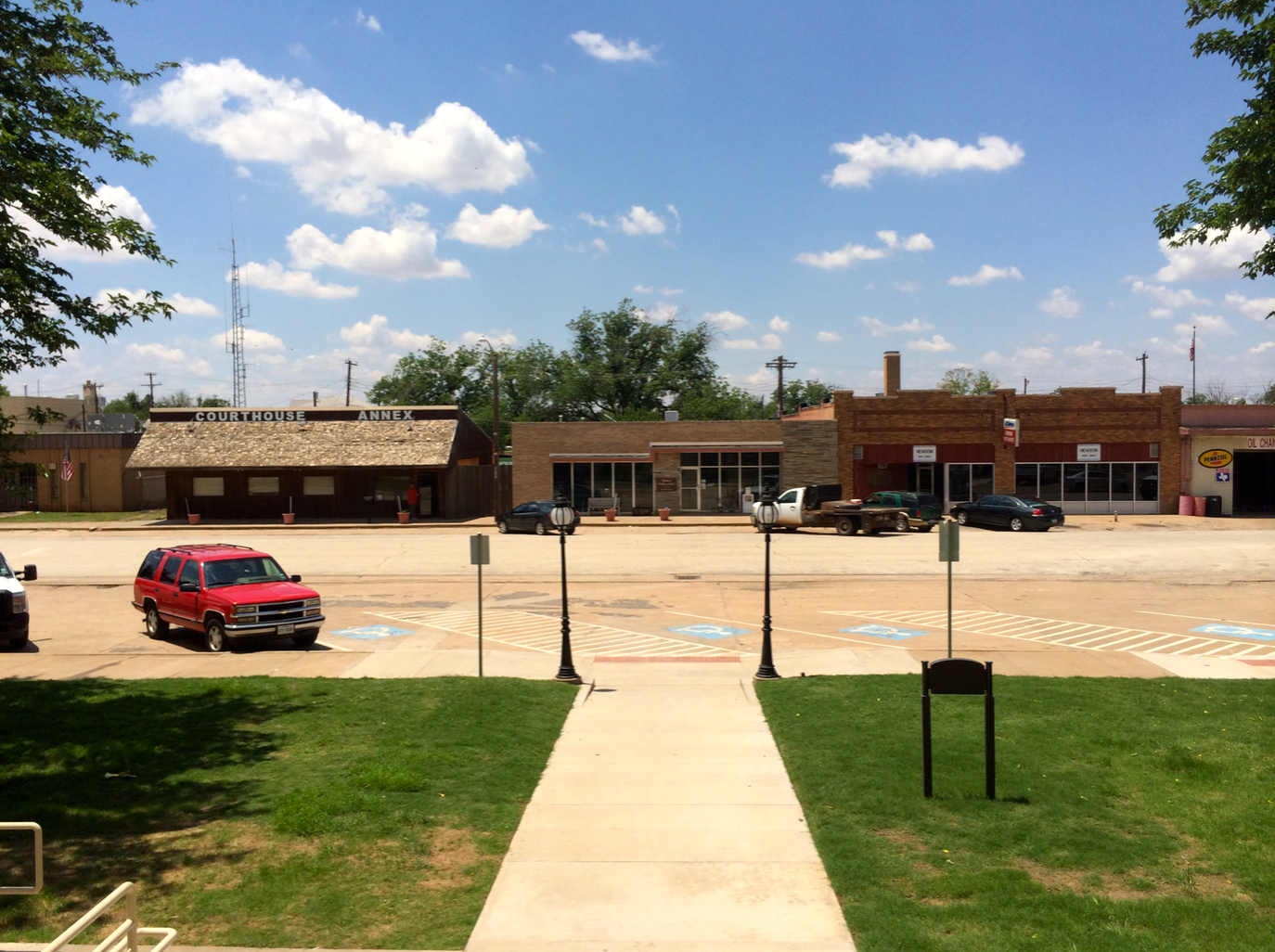 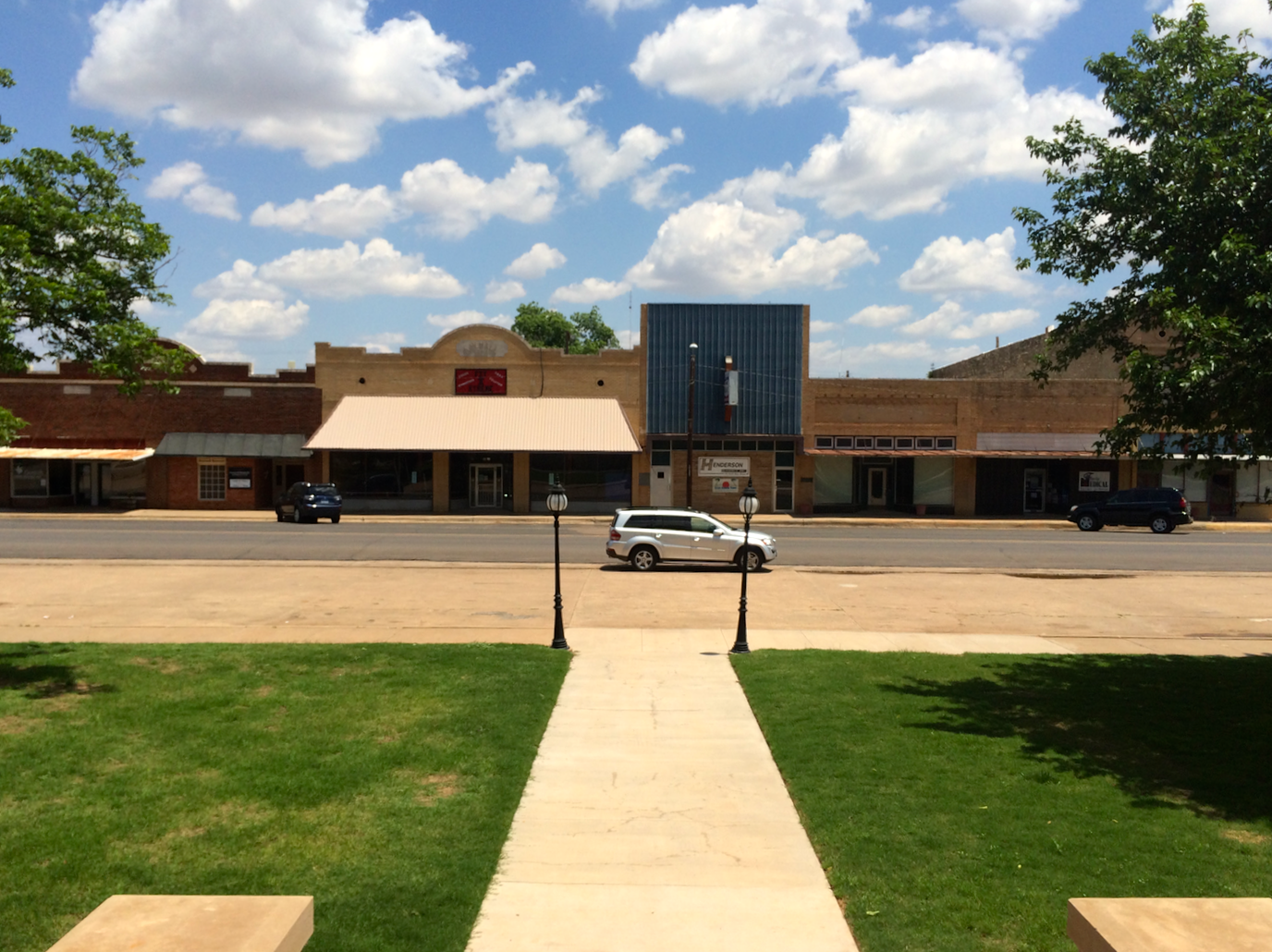 The view of Main Street from the eastern doors 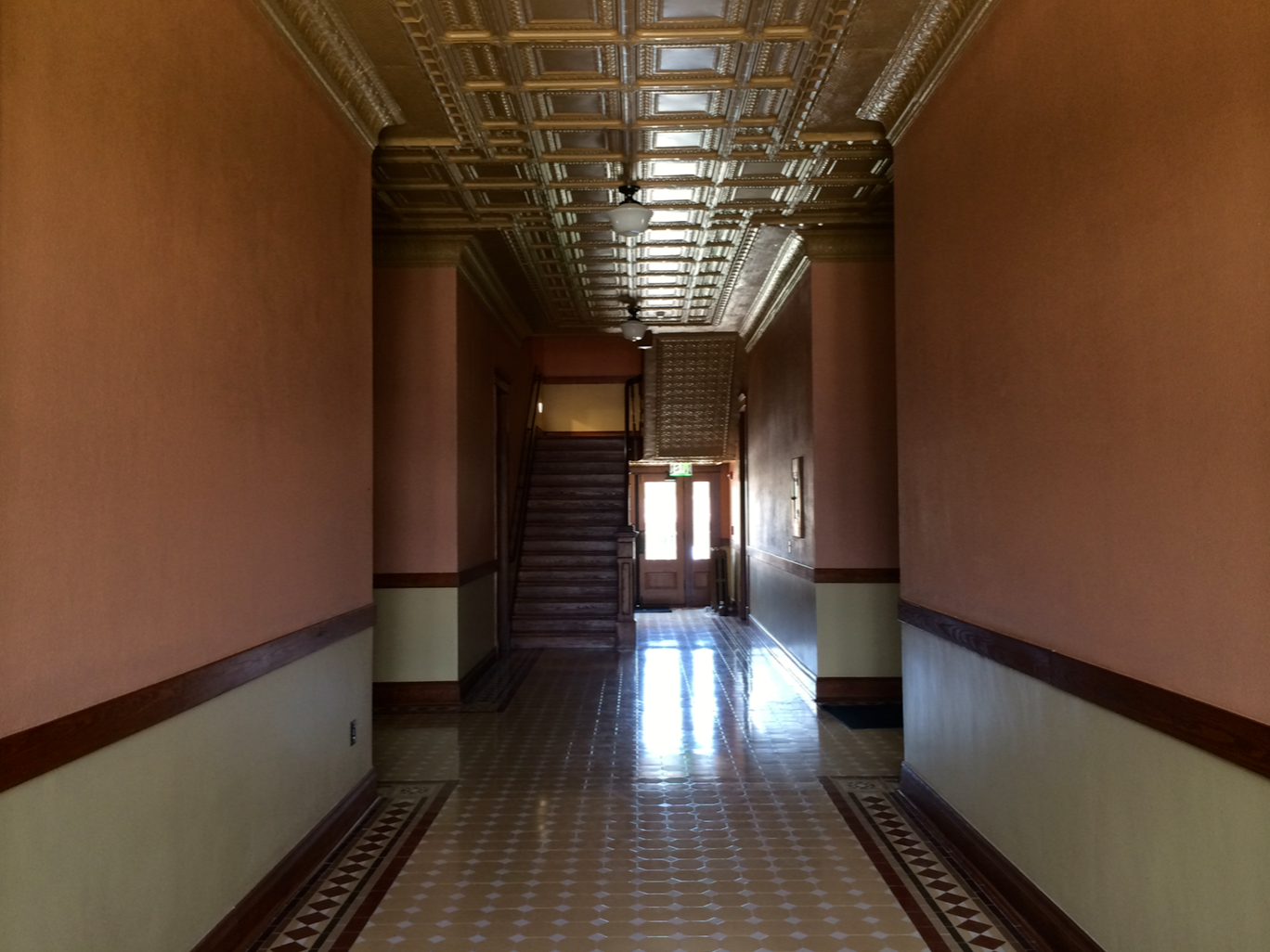 The courthouse interior smelled of new paint at the time of my visit. 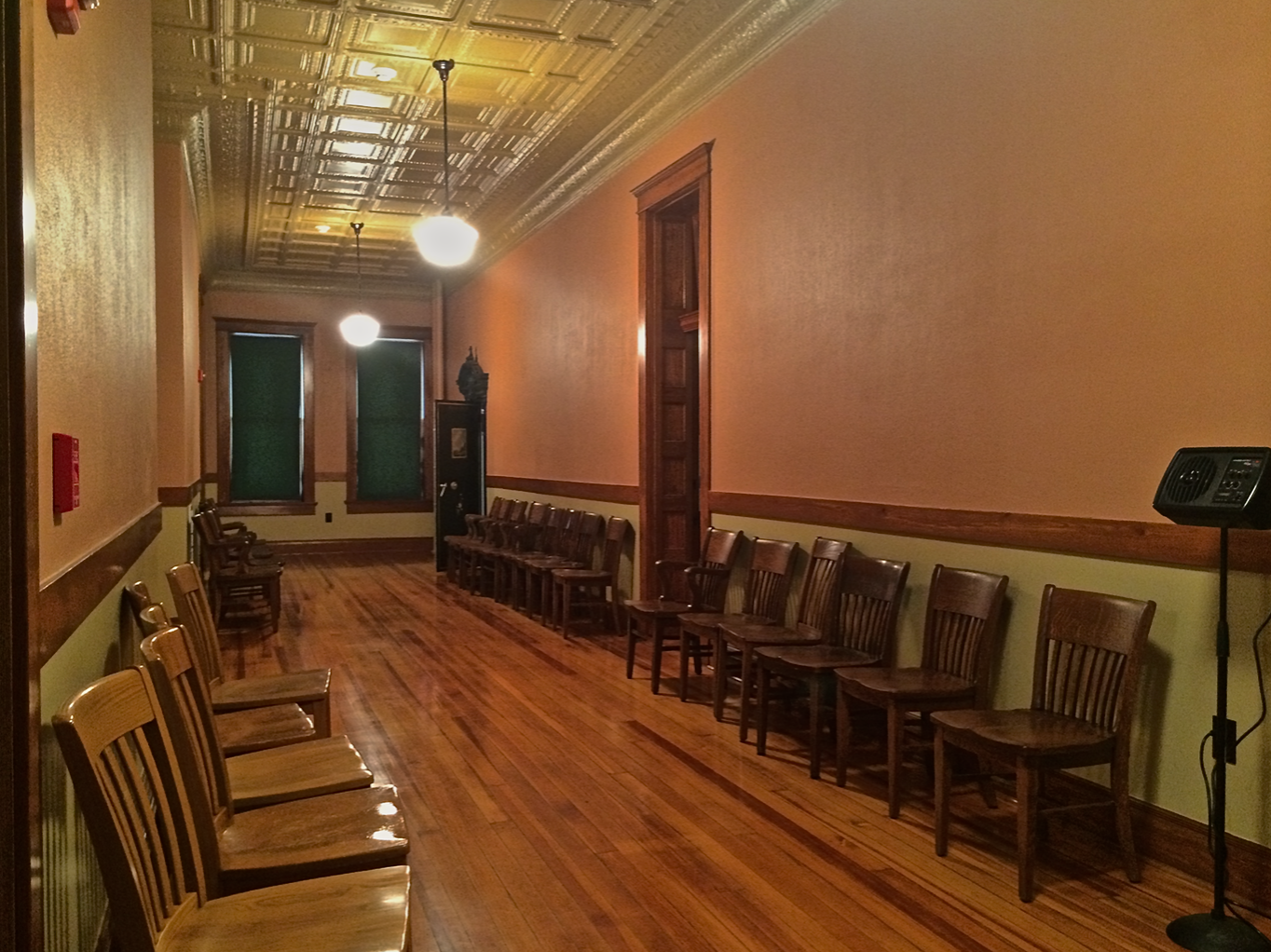 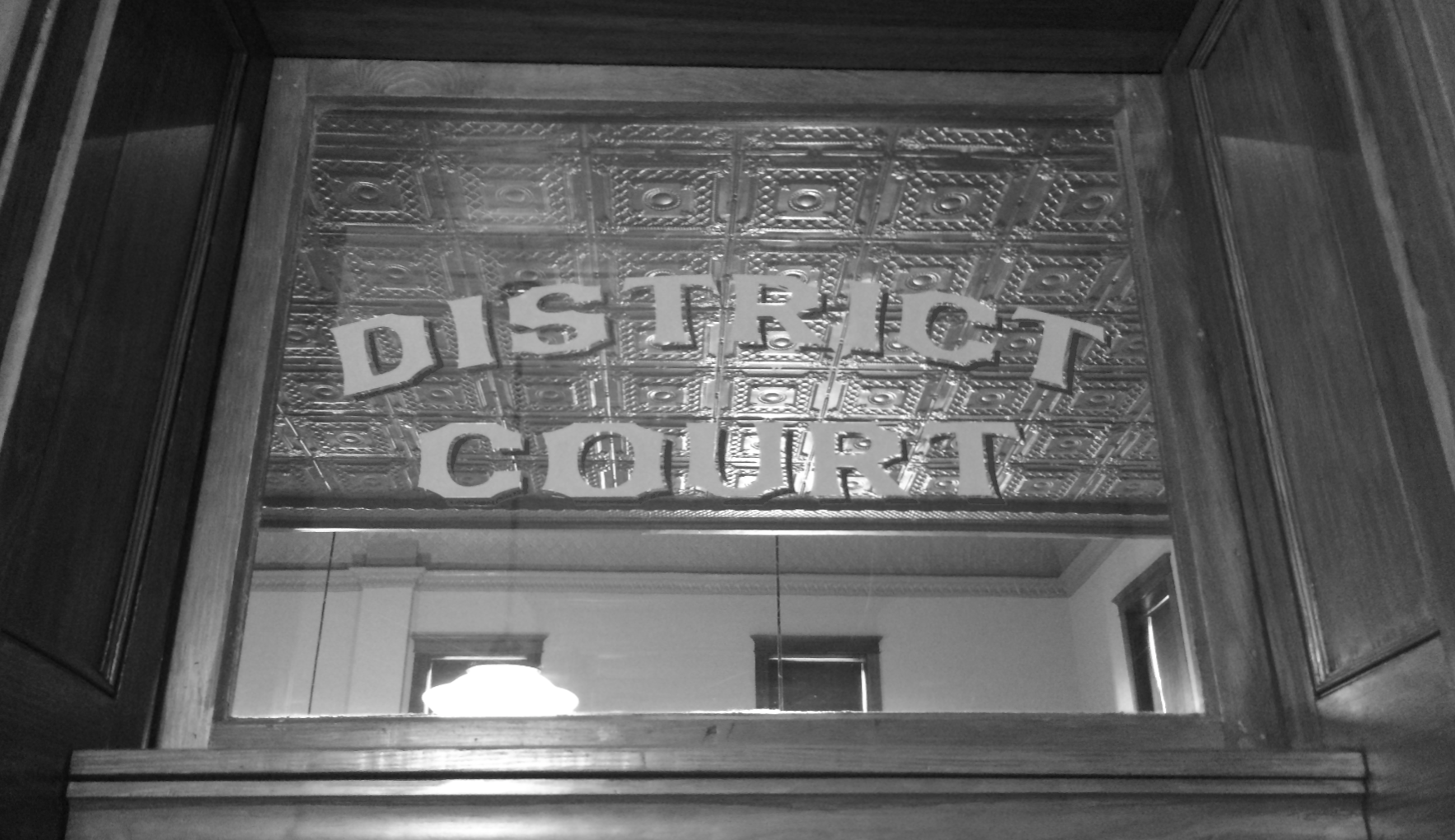 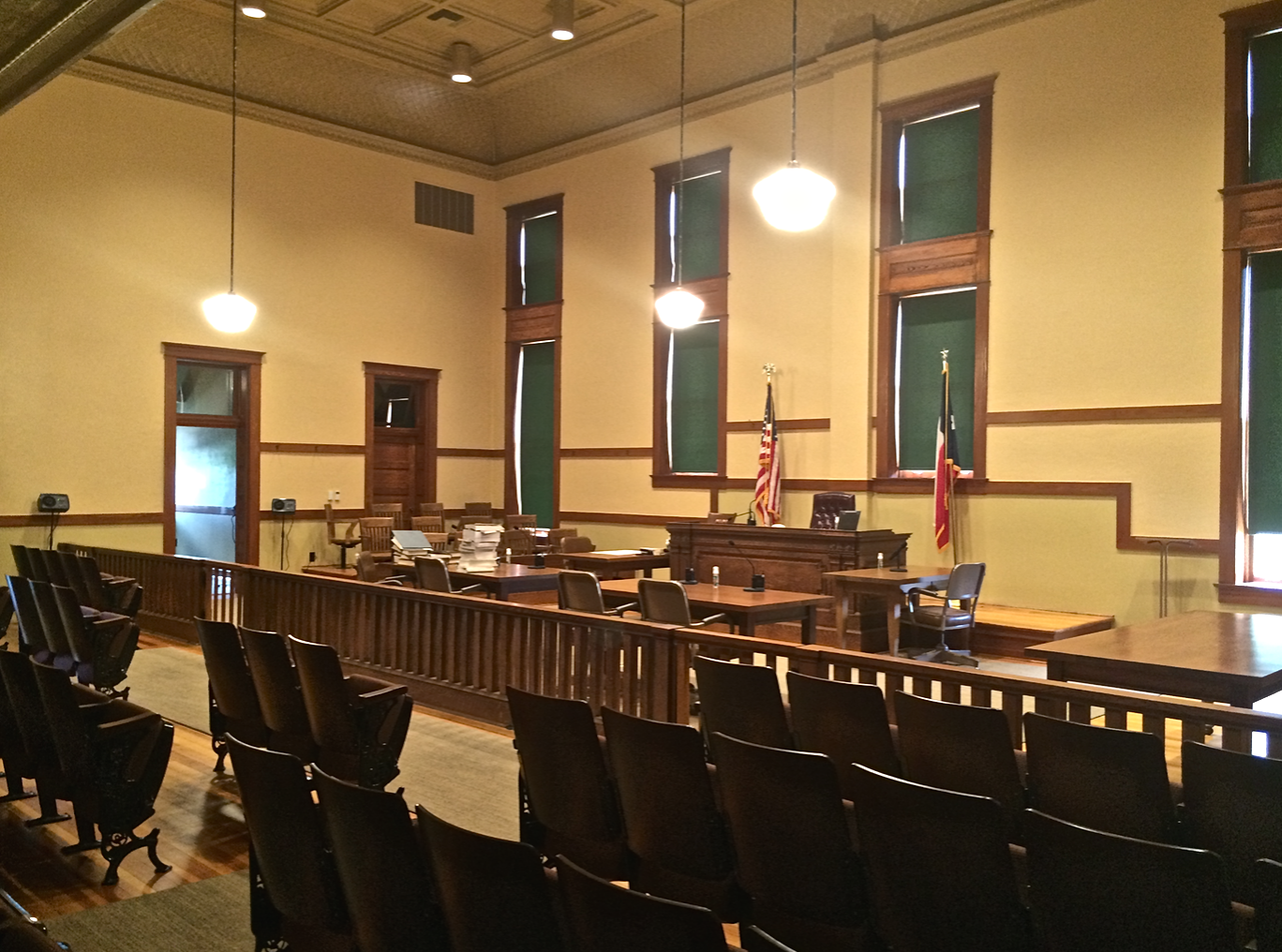 Someone here has been doing some very heavy reading.

A section of the newly restored ceiling… 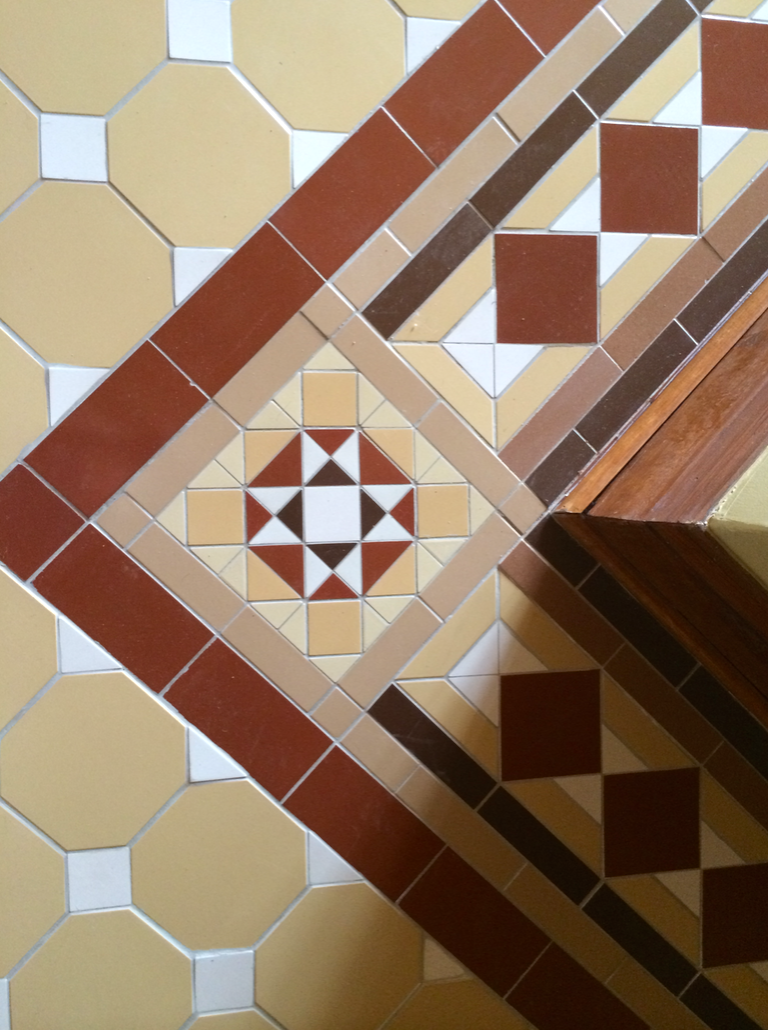 …and a section of the floor

The courthouse, as viewed from the opposite side of Mercer Street; yes, that is a set of butterfly-patterned sun shades 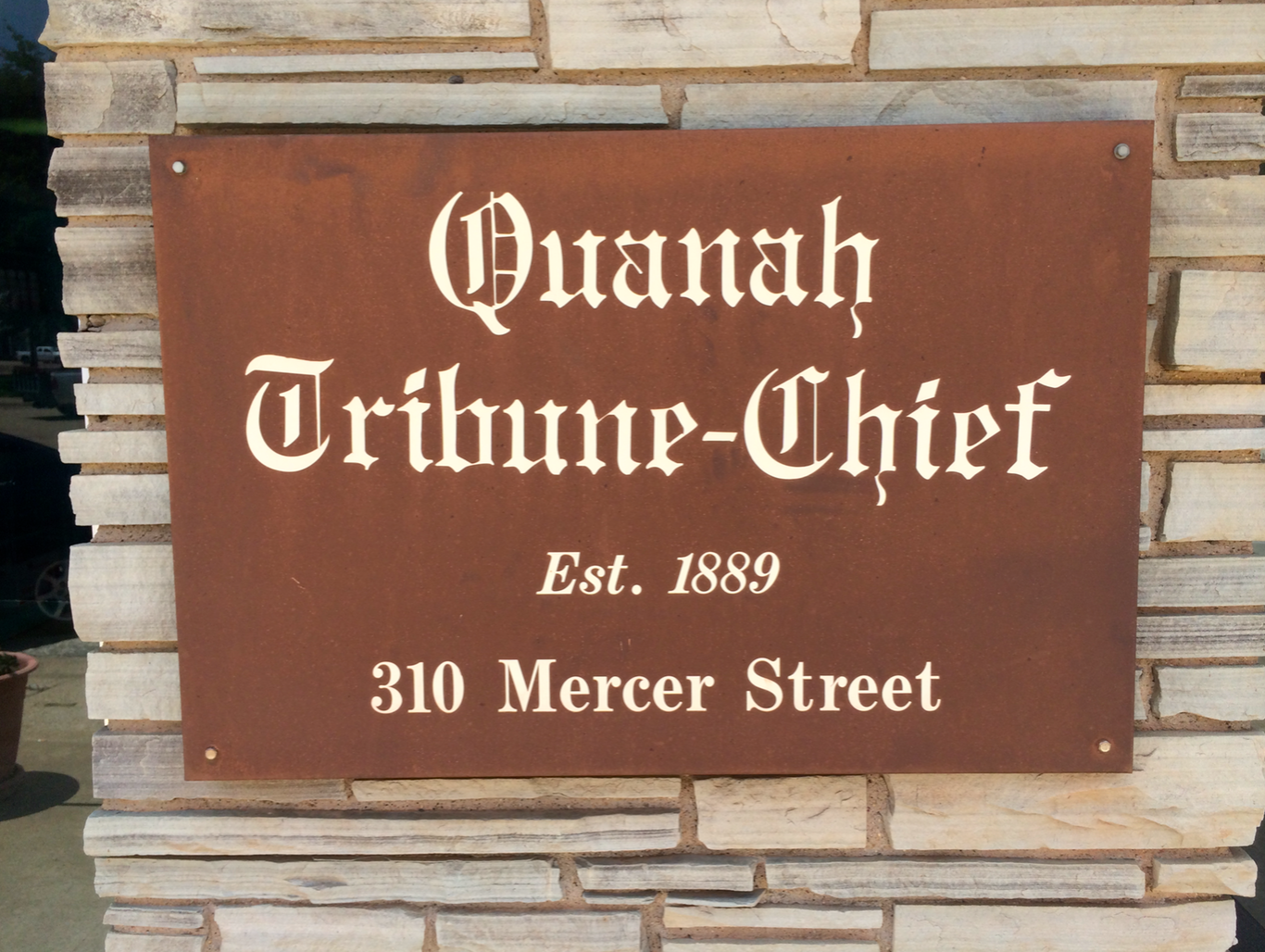 Mercer Street is the home of both the courthouse annex and the area newspaper. 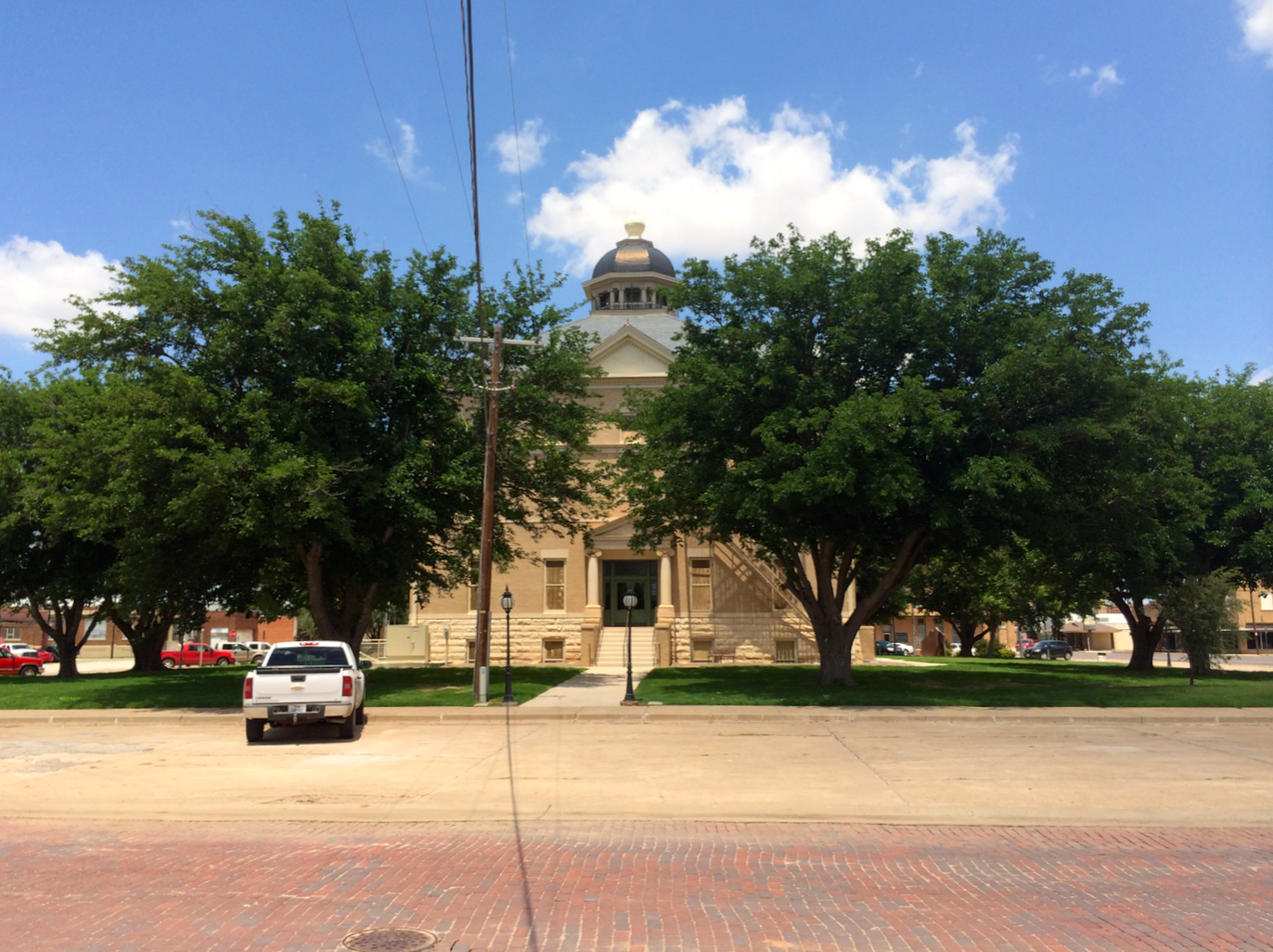 The southern façade as seen from across 4th Street 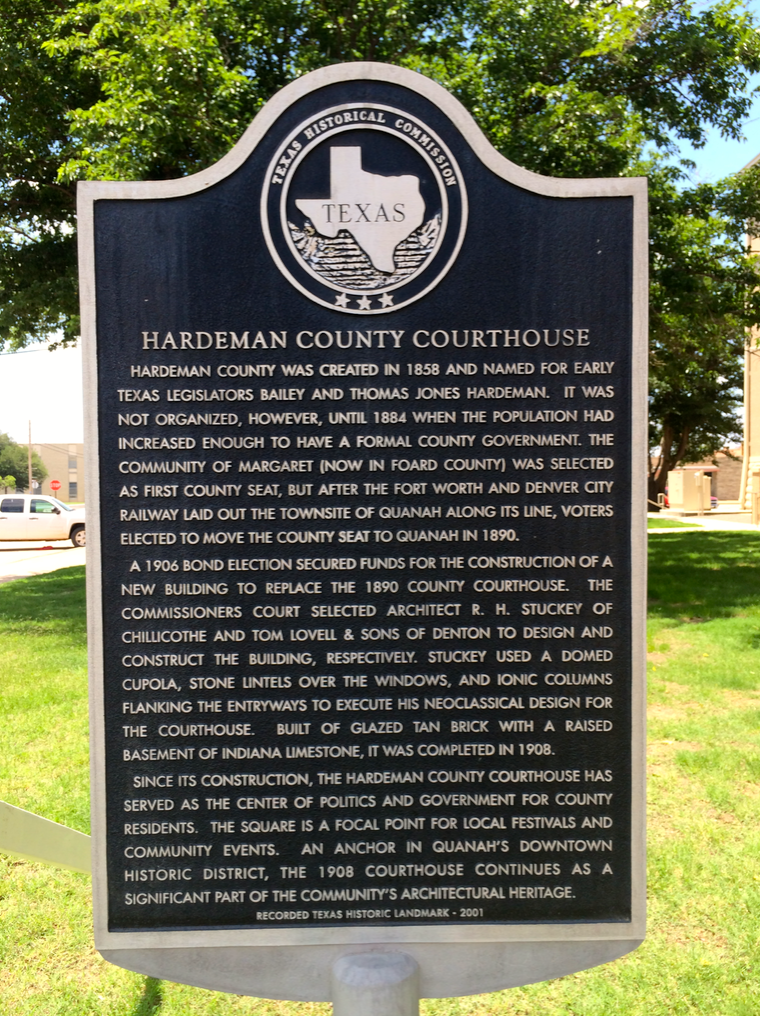 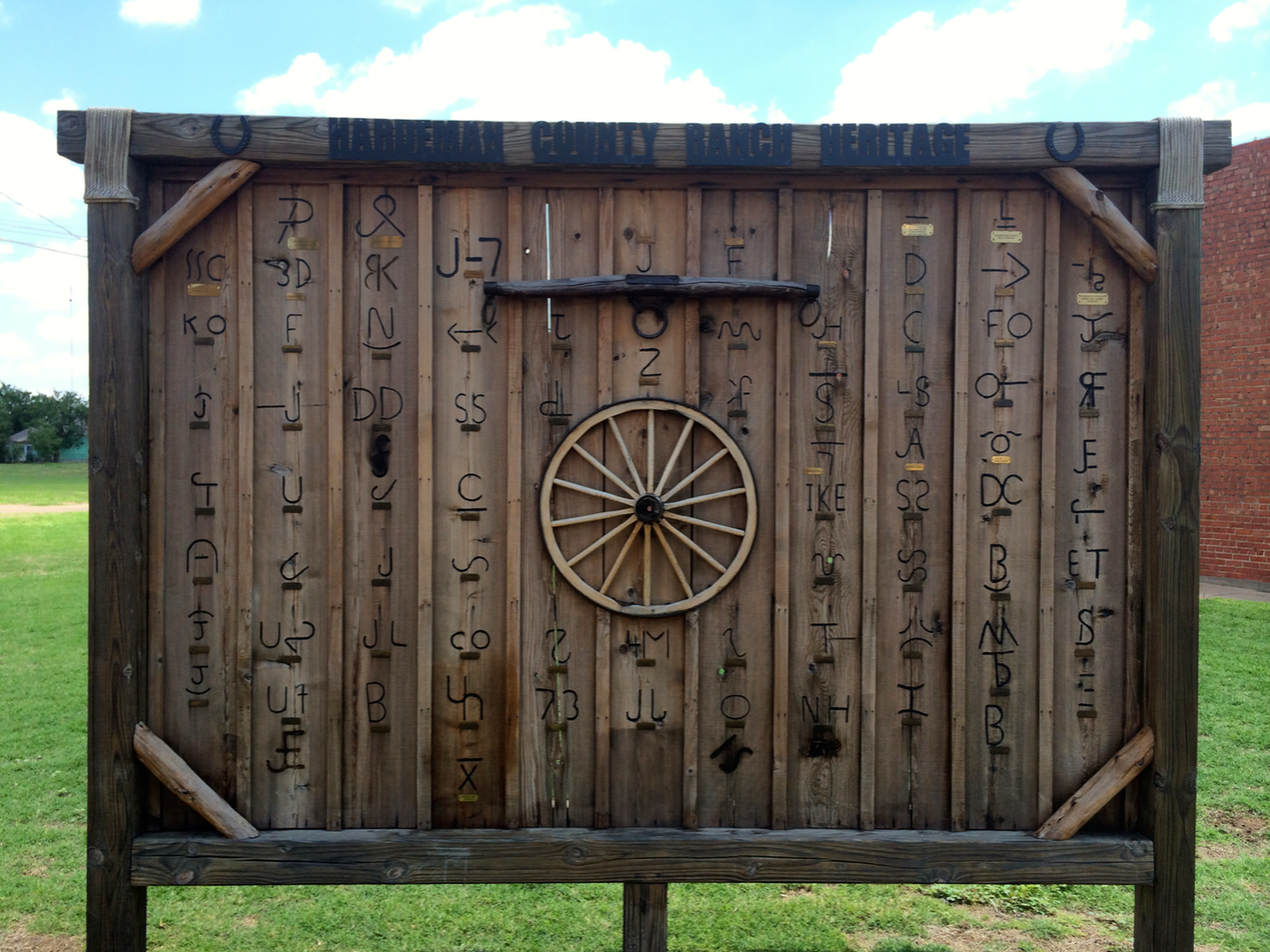 The historic Hardeman County Jail is on Green Street, two blocks northwest of the courthouse. 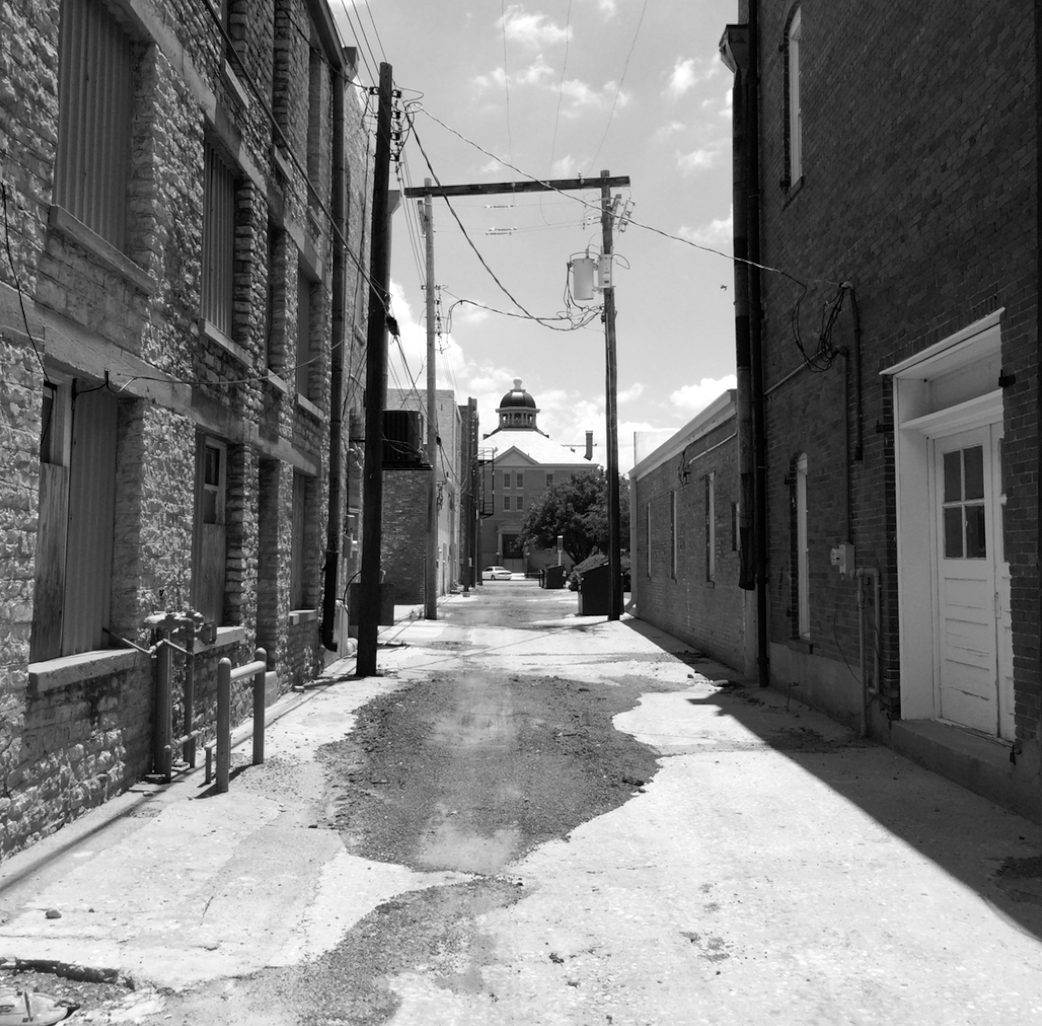 On the road in Quanah