“The county covers 4,566 square miles of terrain in the Rio Grande basin that varies from mountainous to nearly level, with elevations ranging from 3,200 to 7,500 feet above sea level”

“Petroglyphs, middens, and pottery from prehistoric peoples have been found at various springs in Hudspeth County. Artifacts found in the southern part suggest that Jornada Mogollón people (A.D. 900–1350) were practicing agriculture in the Rio Grande floodplain; the Salt Basin in northeastern Hudspeth County was occupied  by hunter-gatherers during roughly the same period.”

”A more ferocious group, the Mescalero Apaches, greeted later European  travelers and explorers, who learned to avoid springs frequented by them.  Among these was Indian Hot Springs, a sacred place to the Apaches, who  used the medicinal water to heal wounds.”

”The California Gold Rush of 1849 intensified demands for trails to the  west, and both the Butterfield Overland Mail and the San Antonio-El Paso  Mail crossed the area in the 1850s. Fort Quitman was established in 1858  to provide protection for travelers on the latter route, which passed through  southern Hudspeth County; the site of the fort, however, was already  known to Forty-Niners as the first shade for hundreds of miles.”

“Men from San Elizario and the other villages along the Rio Grande near El Paso had become dependent on the salt trade for their livelihoods. After the Civil War they broke a road from Fort Quitman to the Salt Basin in northeastern Hudspeth County. But Anglo politicians tried to capitalize on this trade by asserting ownership of the salt lakes and levying fees on the traders. The result was the Salt War of San Elizario, which heightened tensions between Mexicans and Americans in the 1870s.”

“A new county was officially organized from eastern El Paso County in February 1917. It was first to have been called Darlington County, then Turney County, before it was finally named for state senator Claude Benton Hudspeth of El Paso. Sierra Blanca was made the county seat, and the county courthouse there is the only one in Texas made entirely of adobe.”

“Hudspeth County has generally been richer in minerals than in prime cropland and fresh water. In the early 1940s zinc was briefly produced in the Eagle Mountains, and from 1942 to 1950 the same area produced some 15,000 short tons of fluorspar.” (Like neighboring Culberson County, less than one percent of Hudspeth County is considered “prime farmland”).

Sierra Blanca is named for the local mountain of the same name. Also, whether or not you saw it above, the courthouse there is the ONLY one in the state to be constructed primarily of adobe. 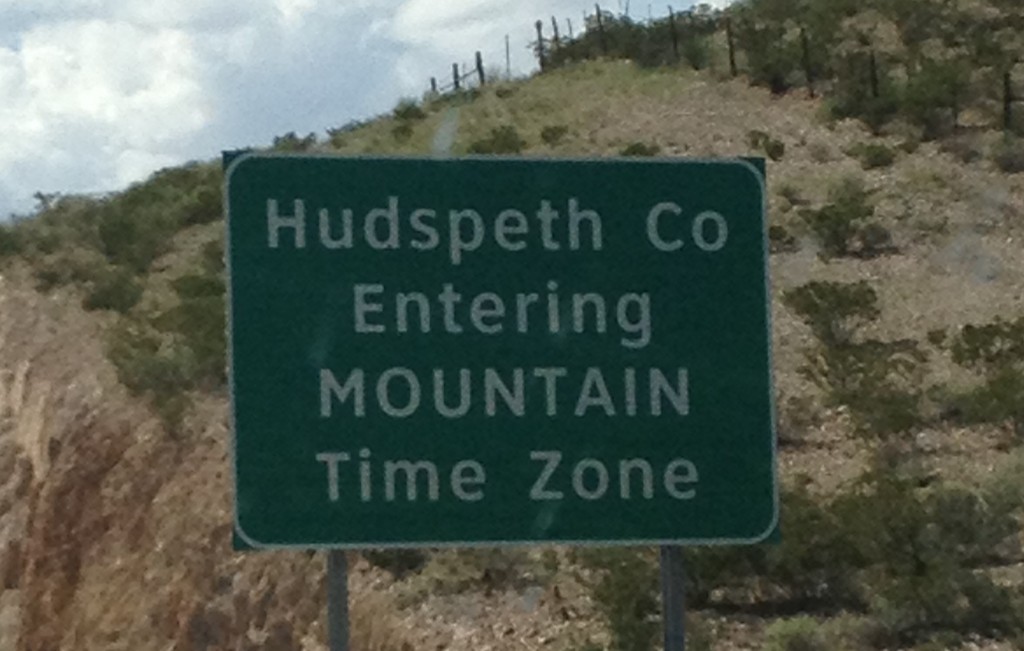 Two Texas counties are part of the Mountain Time Zone. These are Hudspeth and El Paso. 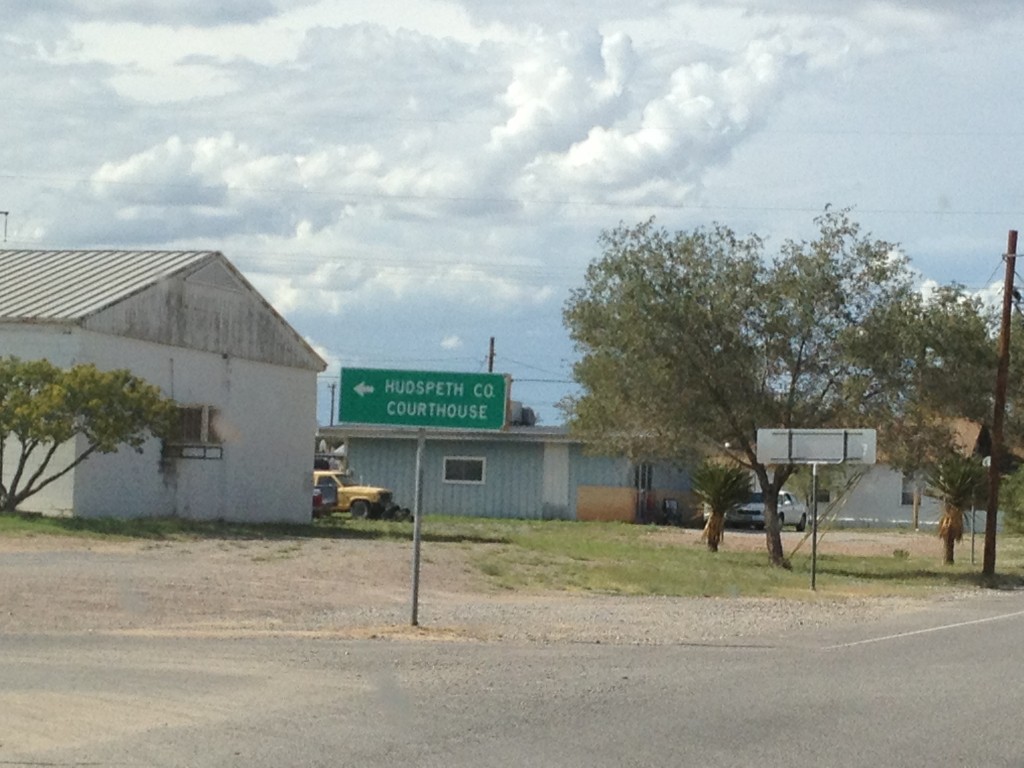 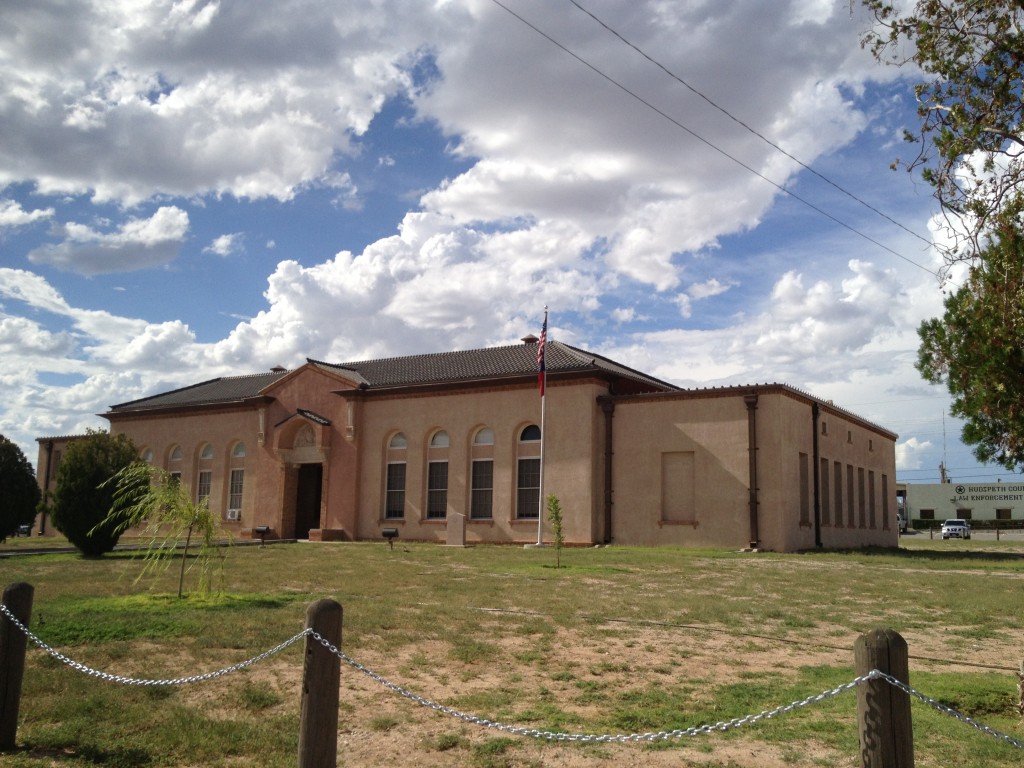 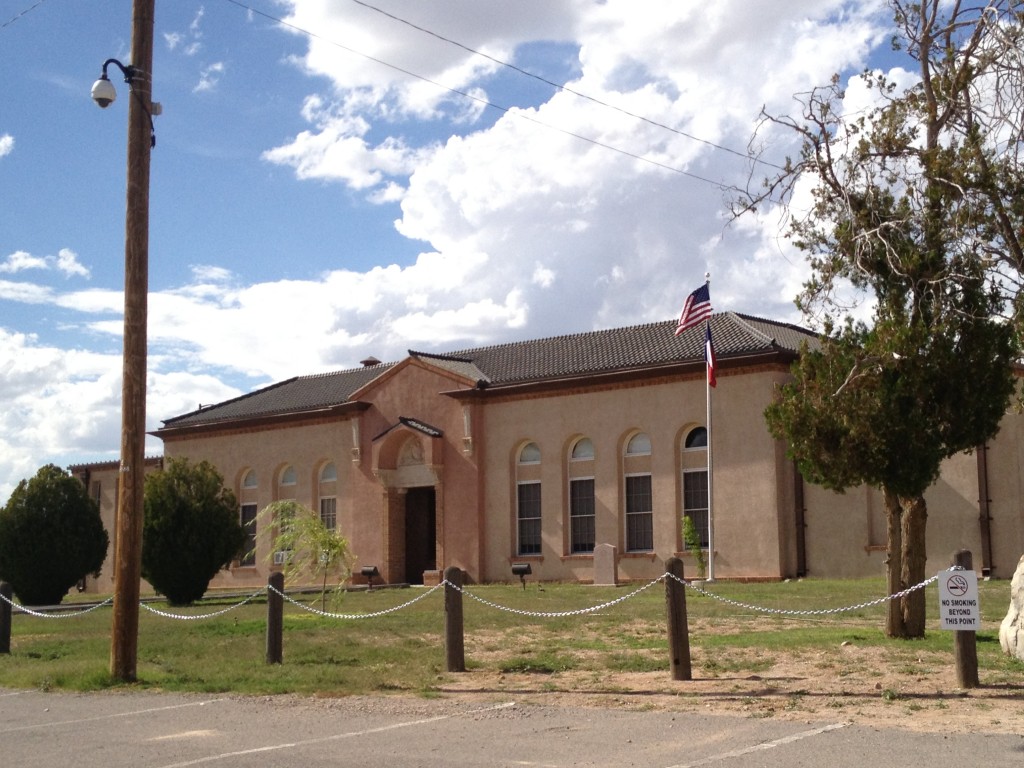 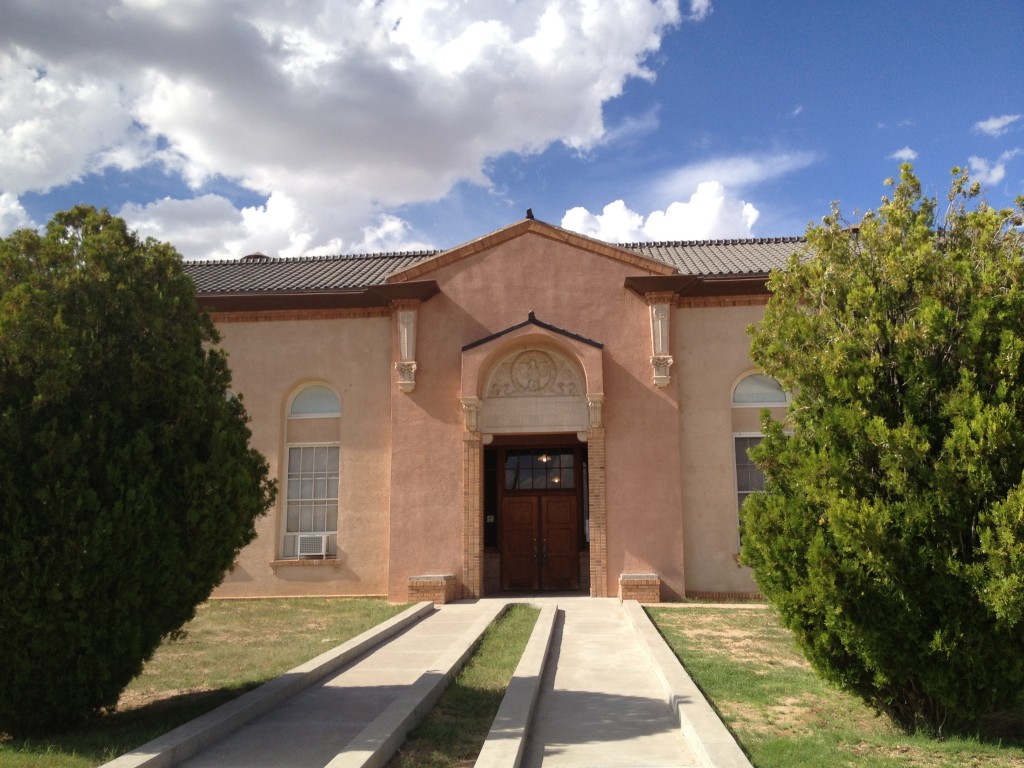 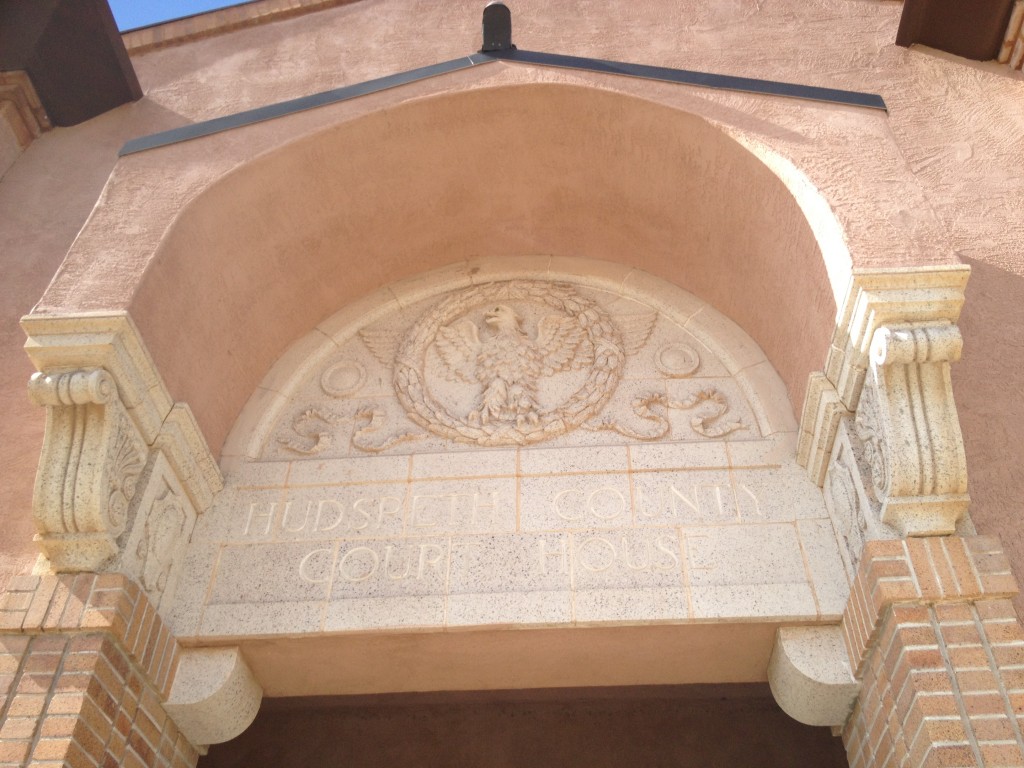 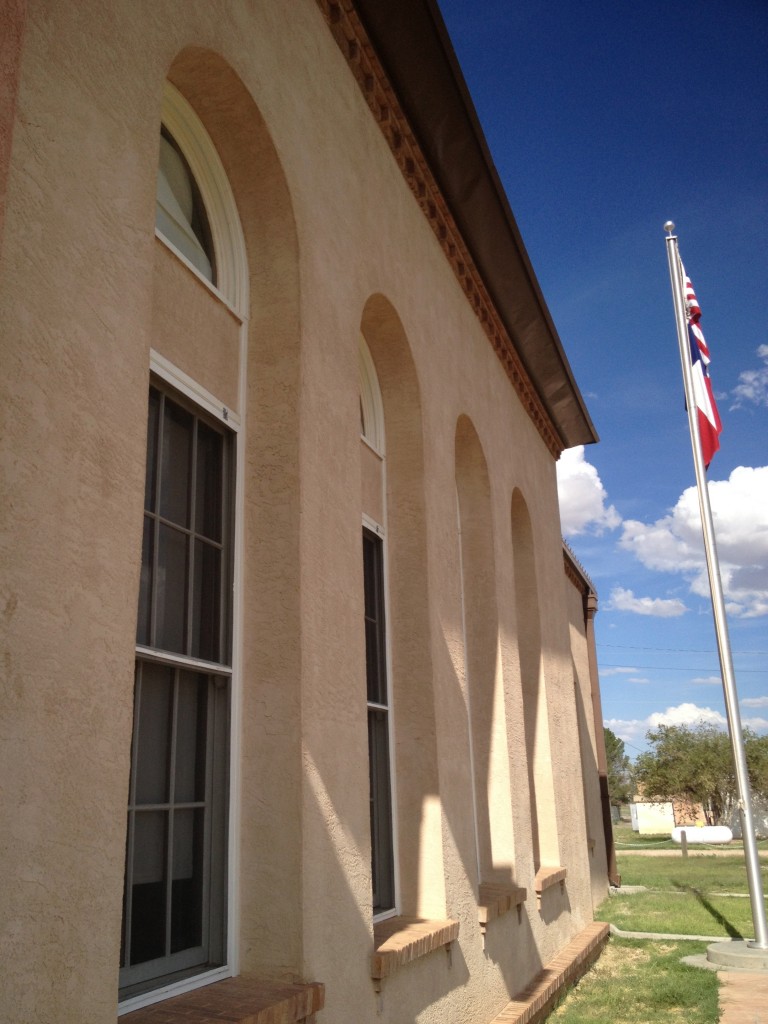 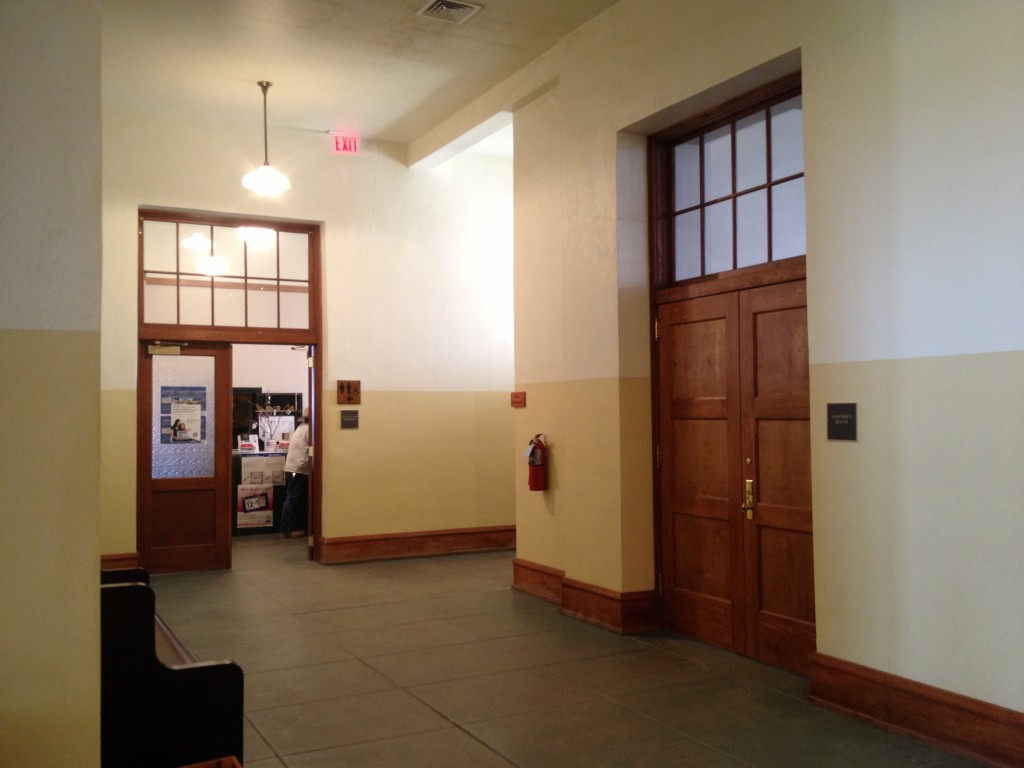 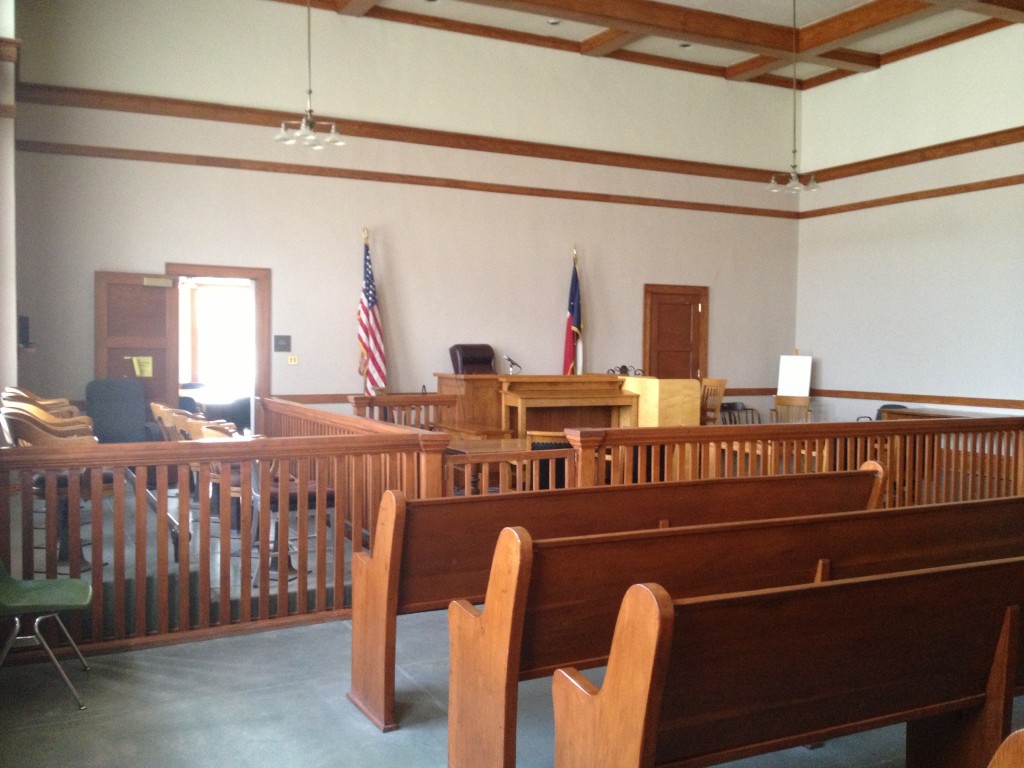 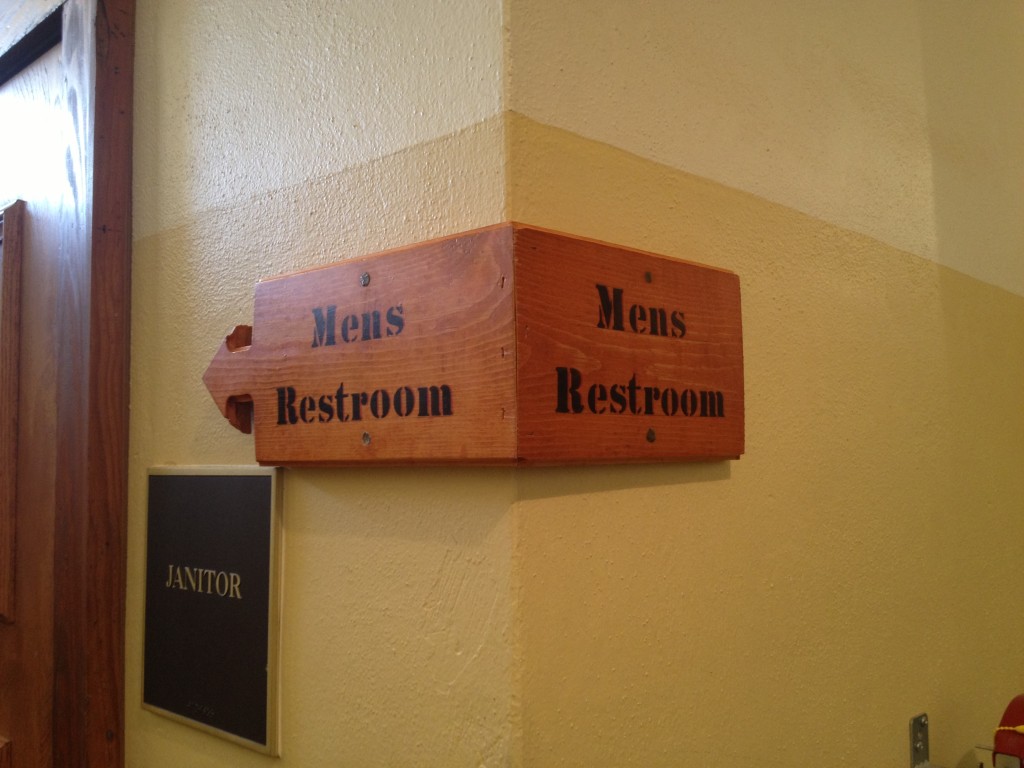 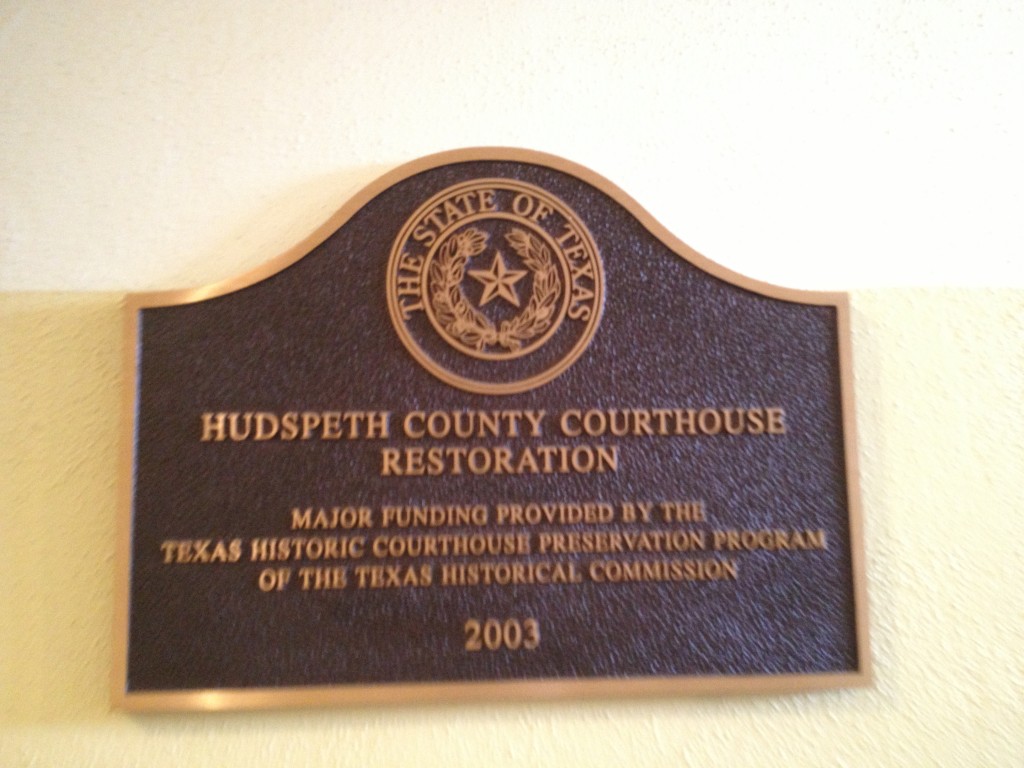 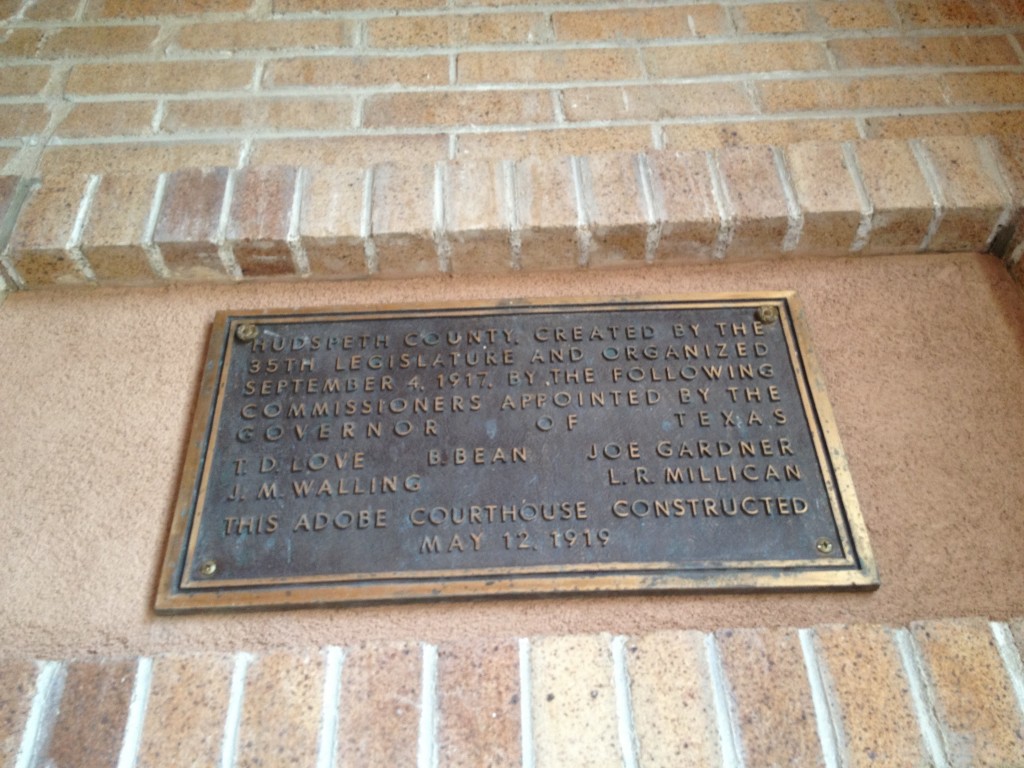 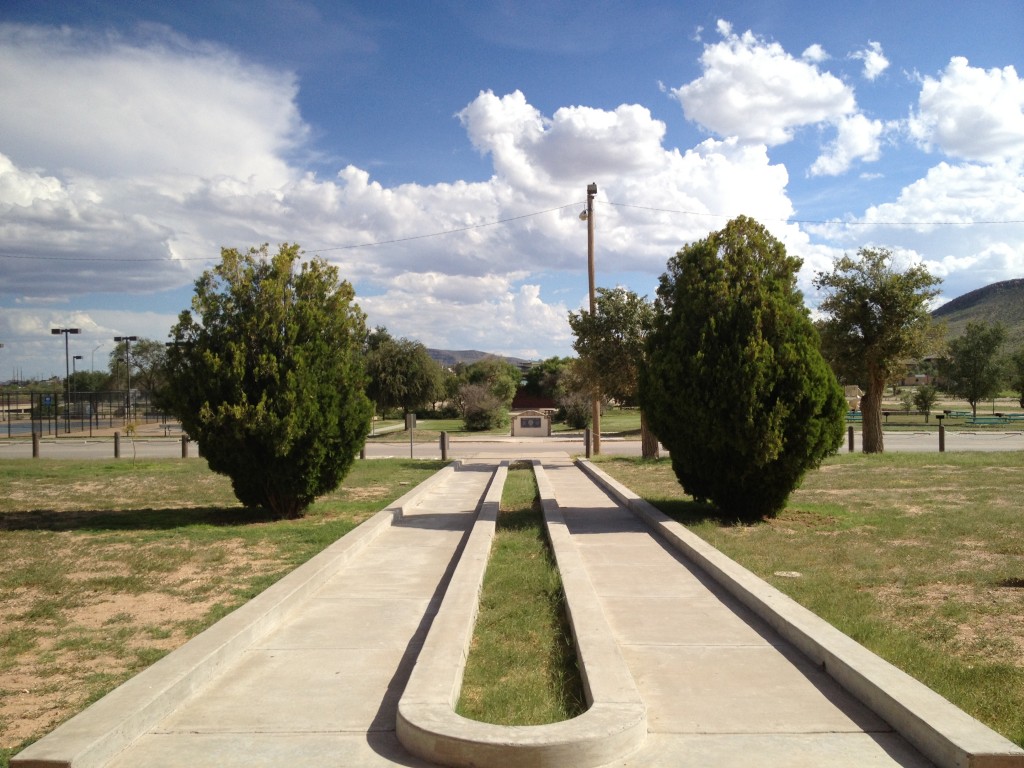 Looking south from the front door towards Fort Worth Street. 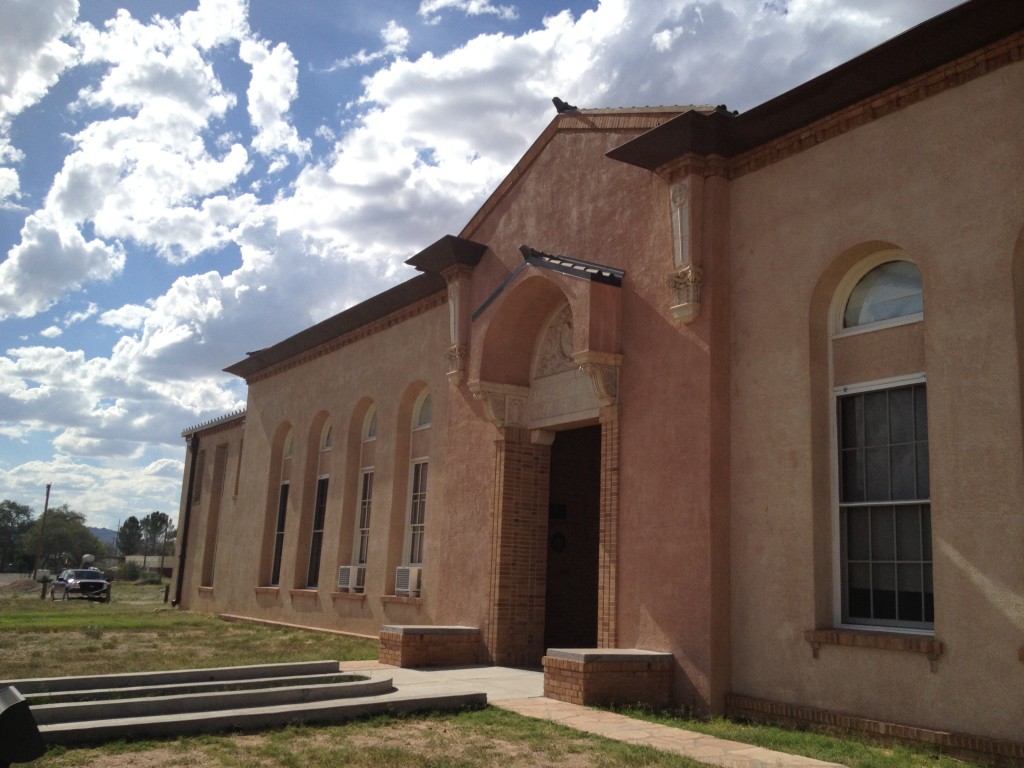 A large rock is on display on the courthouse grounds. 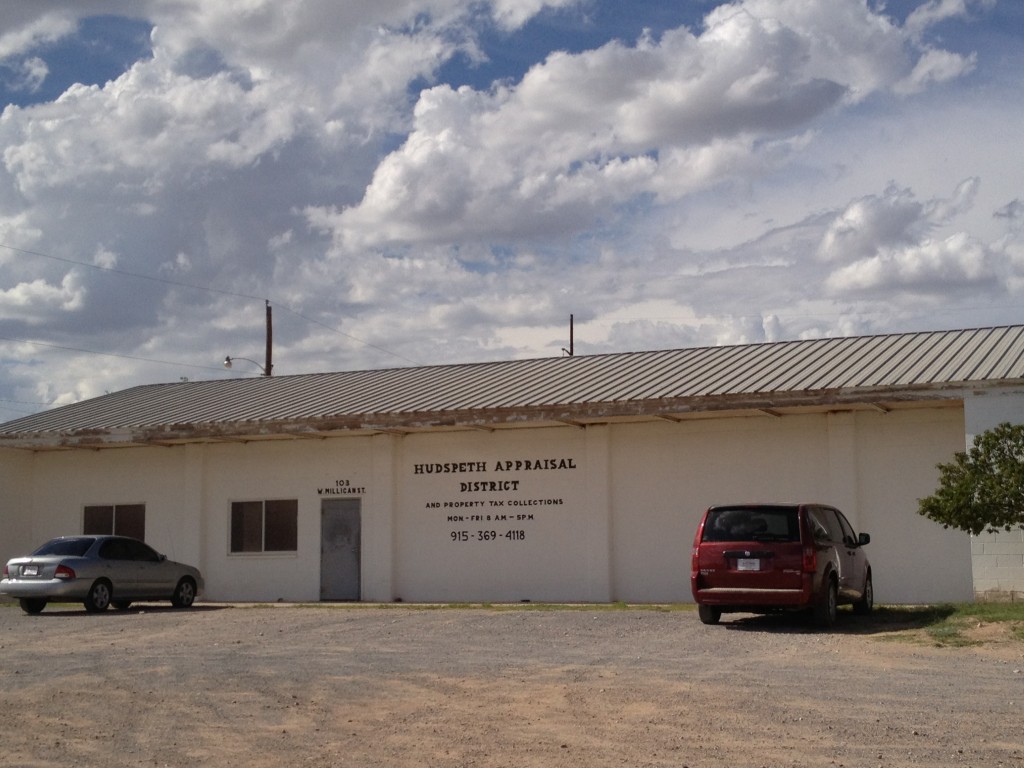 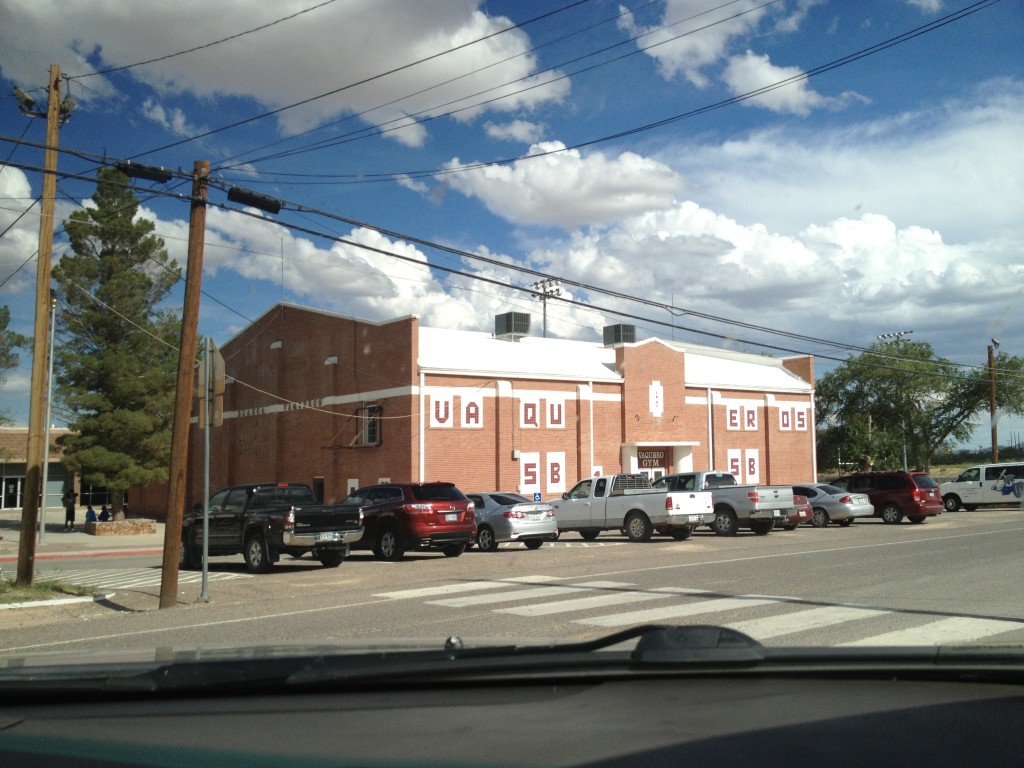 The Vaquero Gym was constructed in 1947 and is part of the Sierra Blanca school. 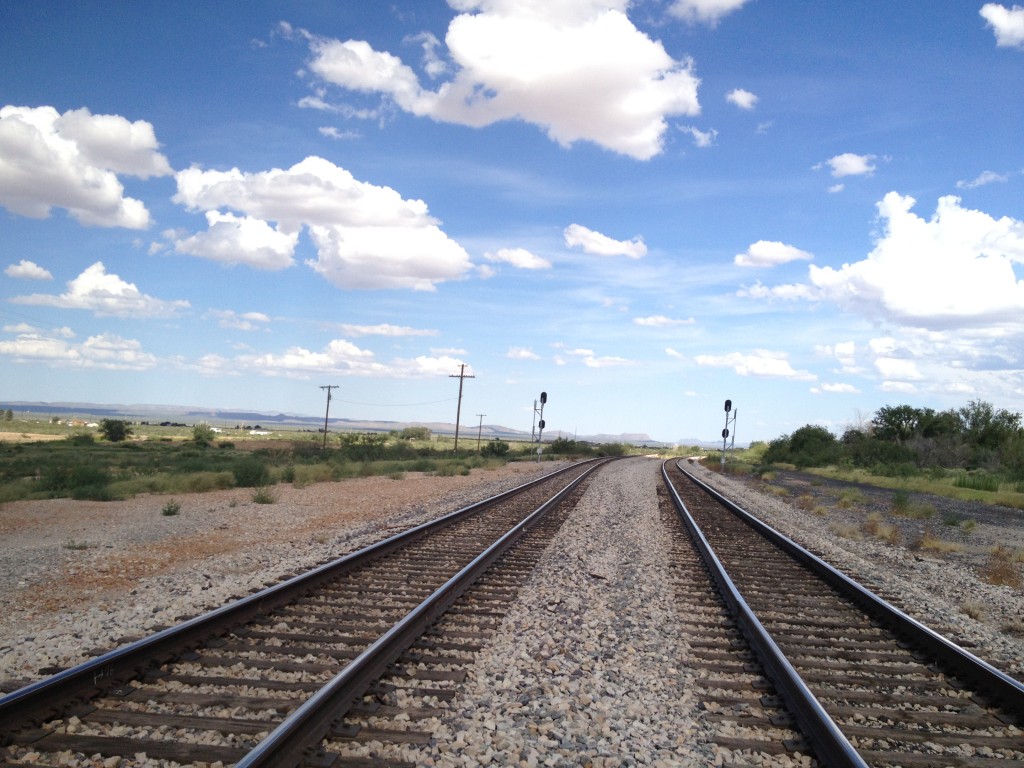 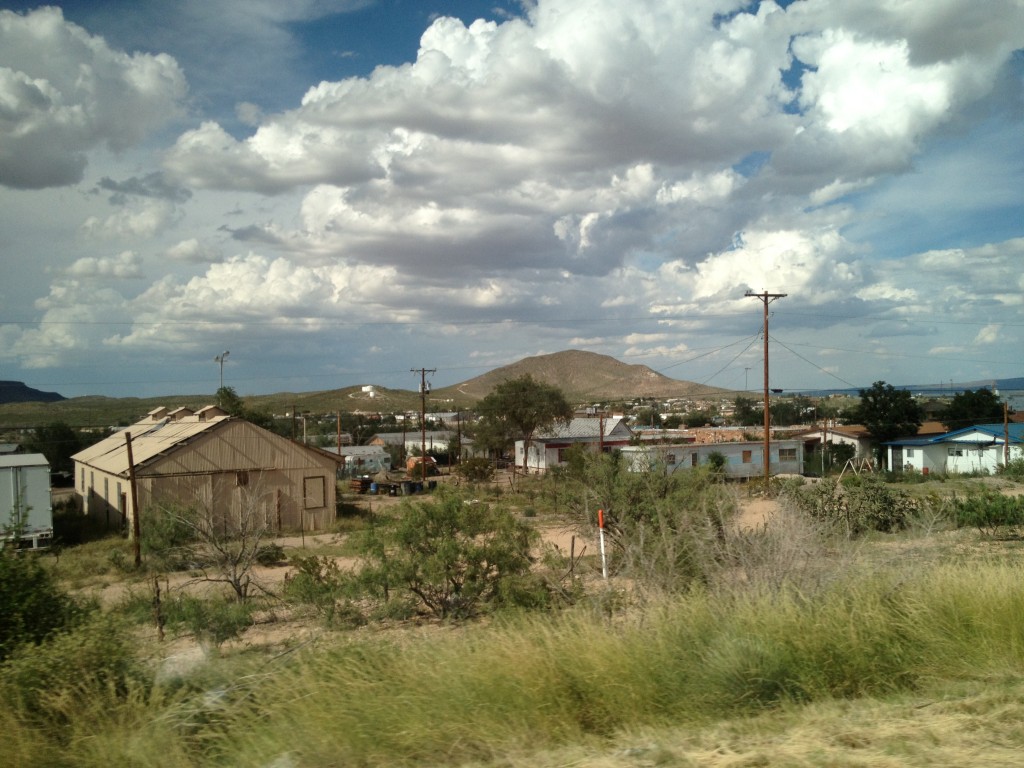 Sierra Blanca as seen from I-10