“Jack County is situated in the North Central Prairies region. The land is undulating to hilly, with light-colored, loamy soils over very deep reddish clayey subsoils, shale, and sandstone. The county’s 920 square miles [are] forested mainly by mesquite, live oak, blackjack oak, and post oak, with pecan, elm, walnut, and cottonwood trees along the waterways. The altitude increases from east to west and ranges from 800 feet to 1,350 feet.”

“Settlers began arriving in the future county by 1855, and by 1856 the first settlement, Keechi, was established. Early settlers entering Jack County came mainly from the middle South states, primarily Alabama, North Carolina, Arkansas, Missouri, and Kentucky, many by way of Smith County or other parts of Texas.” 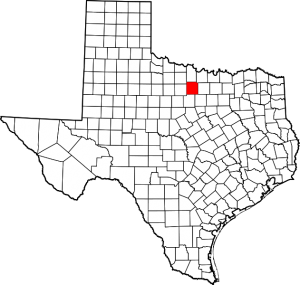 “The Texas legislature approved the establishment of the county on August 27, 1856, and named it for William H. and Patrick C. Jack, participants in the Texas Revolution. It is the only county with that name in the United States. The Butterfield Overland Mail crossed the county.”

“Fort Richardson, on Lost Creek near the site of present-day Jacksboro, was established by the United States Army in 1867 and completed in 1869. It was the most northern of the Texas frontier forts built to protect pioneers against Indian raids and was abandoned in 1878. Mesquiteville was designated county seat; the town was later renamed Jacksboro.”

“Because of the county’s position on the frontier and its relative isolation, a plantation economy never developed; on the eve of theCivil War only thirty-seven slaves lived in the county. Though the earliest newspaper in the county, the Whitemanqv (1860), owned and operated by Harris A. Hamner, advocated the Southern cause, county residents voted 76 to 14 against secession in February 1861.”

“The Jack County area was untouched by combat, but the removal of federal troops from the frontier had dire consequences for the populace. Without an army presence, Indian raids became frequent and numerous residents were forced to flee eastward. The 1860 census counted 1,000 people in Jack County, but by 1870 the population had dwindled to 694. Though federal forces returned to the area after the end of the war, Indian raids on the new settlers continued.”

“Oil, discovered near Bryson in 1923, set off a small boom, as numerous oilfield workers and others attracted by the prospects of easy money moved in. Nevertheless the population of the county as a whole declined steadily after 1915, largely as the result of a series of agricultural busts. The population, which reached a peak of 11,817 in 1910, fell to 9,863 in 1920 and 9,046 in 1930. Income from oil helped some cash-poor farmers to settle debts and survive the lean years of the Great Depression, but many others were forced to sell their farms and equipment and try their hands at something else.”

“The economy began to recover during World War II, but subsequently the population declined slowly. Between 1940 and 1990 the number of residents fell from 10,206 to 6,981.”

“The census counted 8,763 people living in Jack County in 2000. About 86 percent were Anglo, 6 percent were black, and 8 percent were Hispanic. Almost 76 percent of residents older than age twenty-five had graduated from high school, and almost 13 percent had college degrees. In the early twenty-first century petroleum and gas production, oilfield services, and livestock were the central elements of the area’s economy.”

I was the guest of Jack County and Jacksboro on January 8, 2011 and returned to rephotograph the courthouse on May 17, 2014. 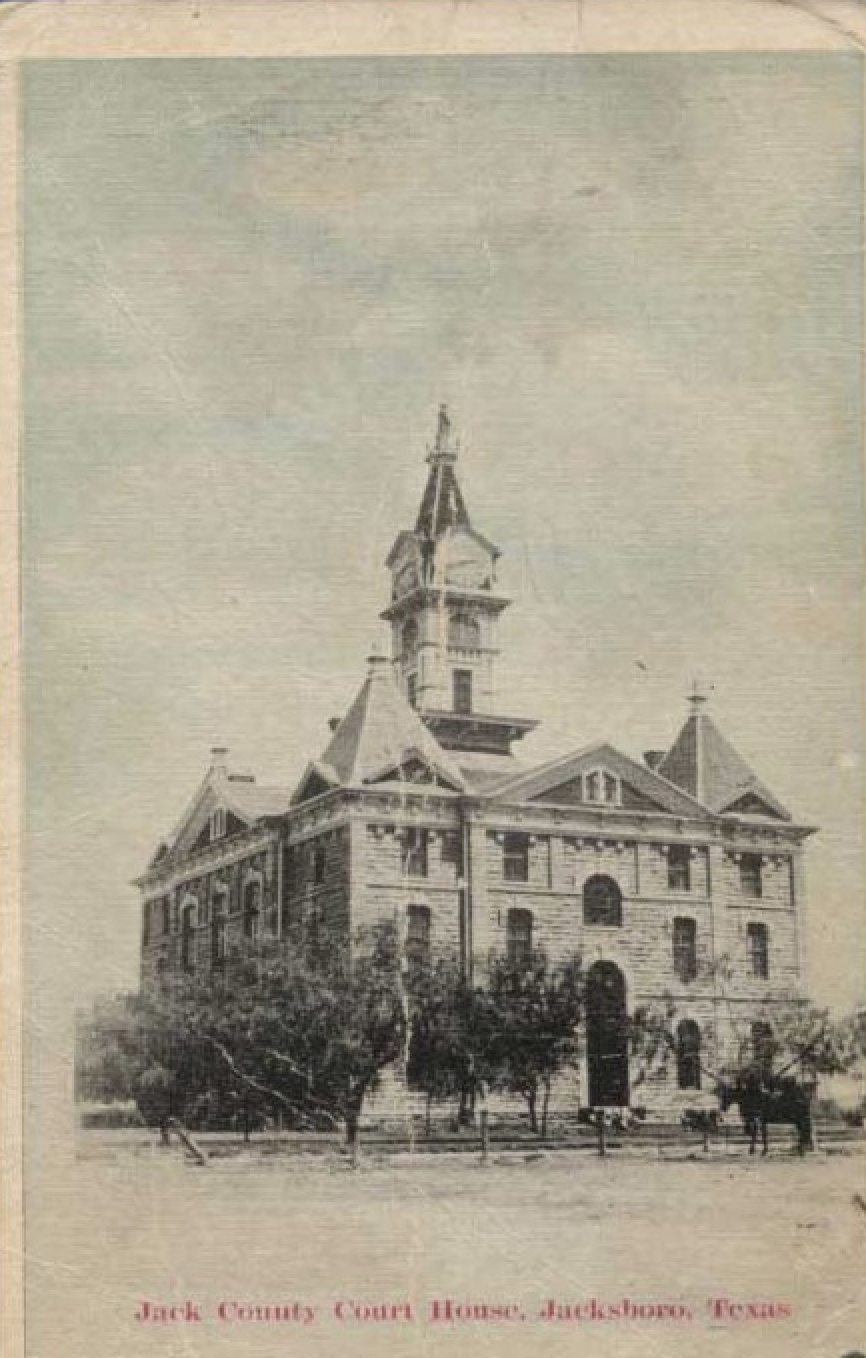 Constructed of limestone by Strain, Risley, & Winburn and designed in the Italianate Style by James Flanders, this courthouse was destroyed in 1938 in preparation for the current structure. The county preserved both the cornerstone and bell of this historic building. 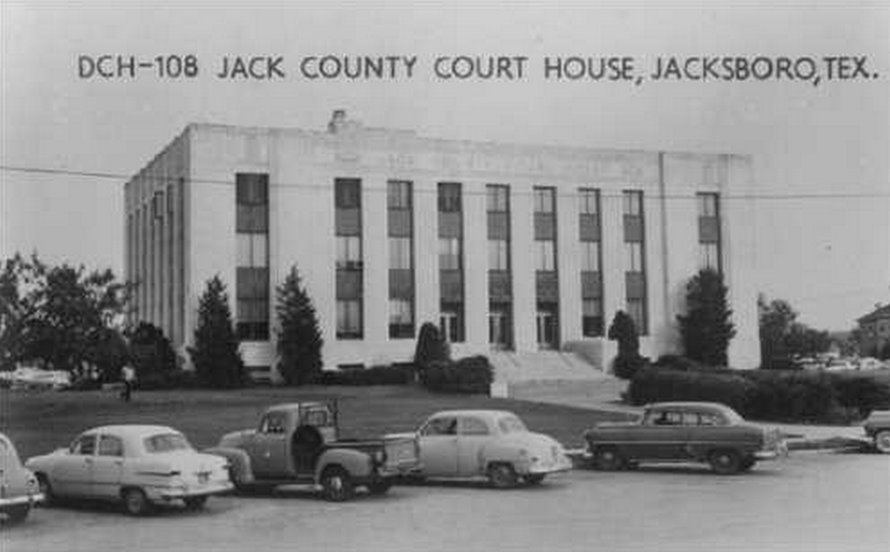 This Moderne work of Voelcker & Dixon cost the county approximately $250,000 with partial funds provided by the WPA. It was built of Cordova Cream limestone by Eckert & Fair of Dallas. 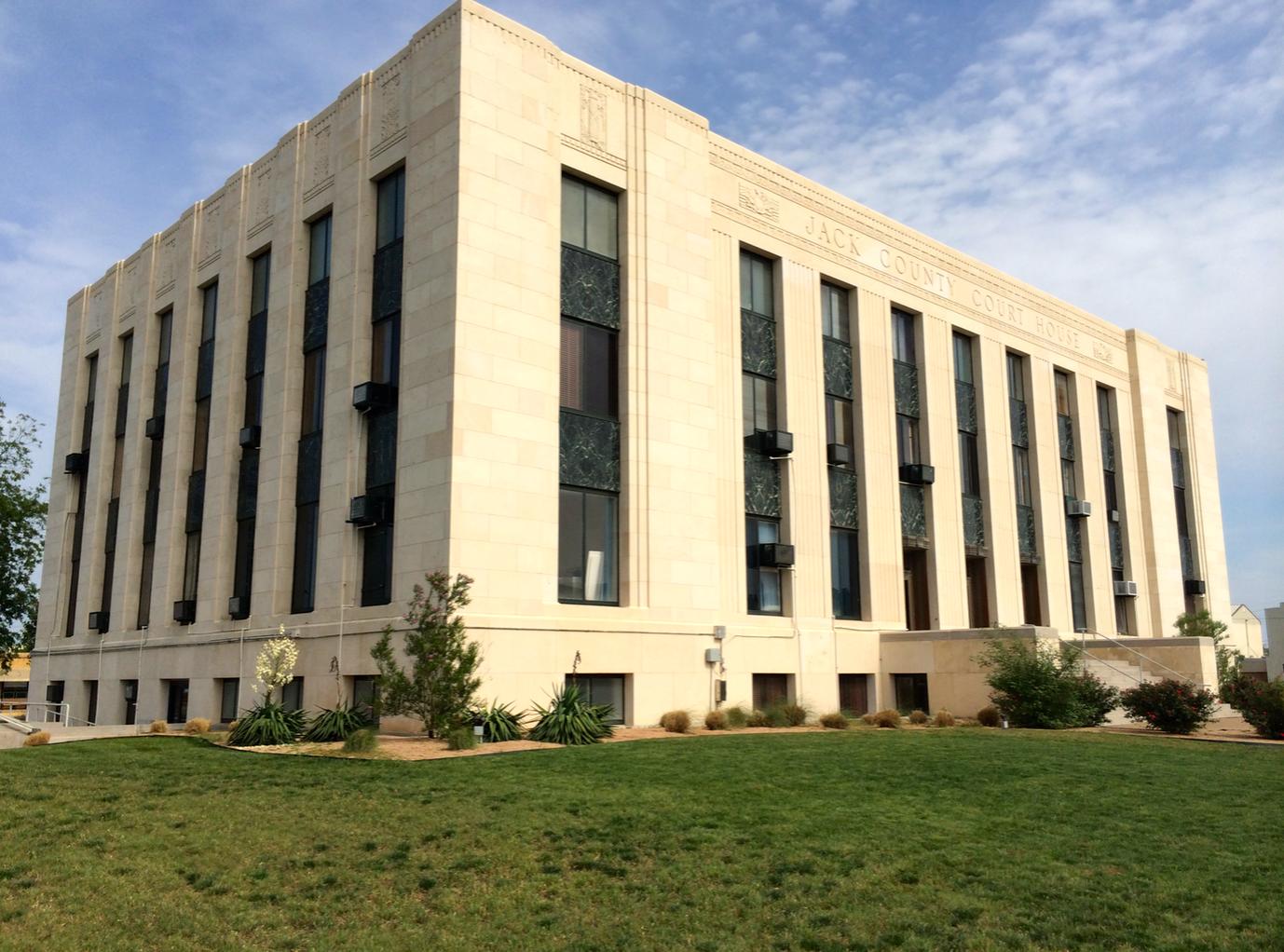 The pristine Jack County Courthouse; for a modern building, it still catches its viewers’ eyes. 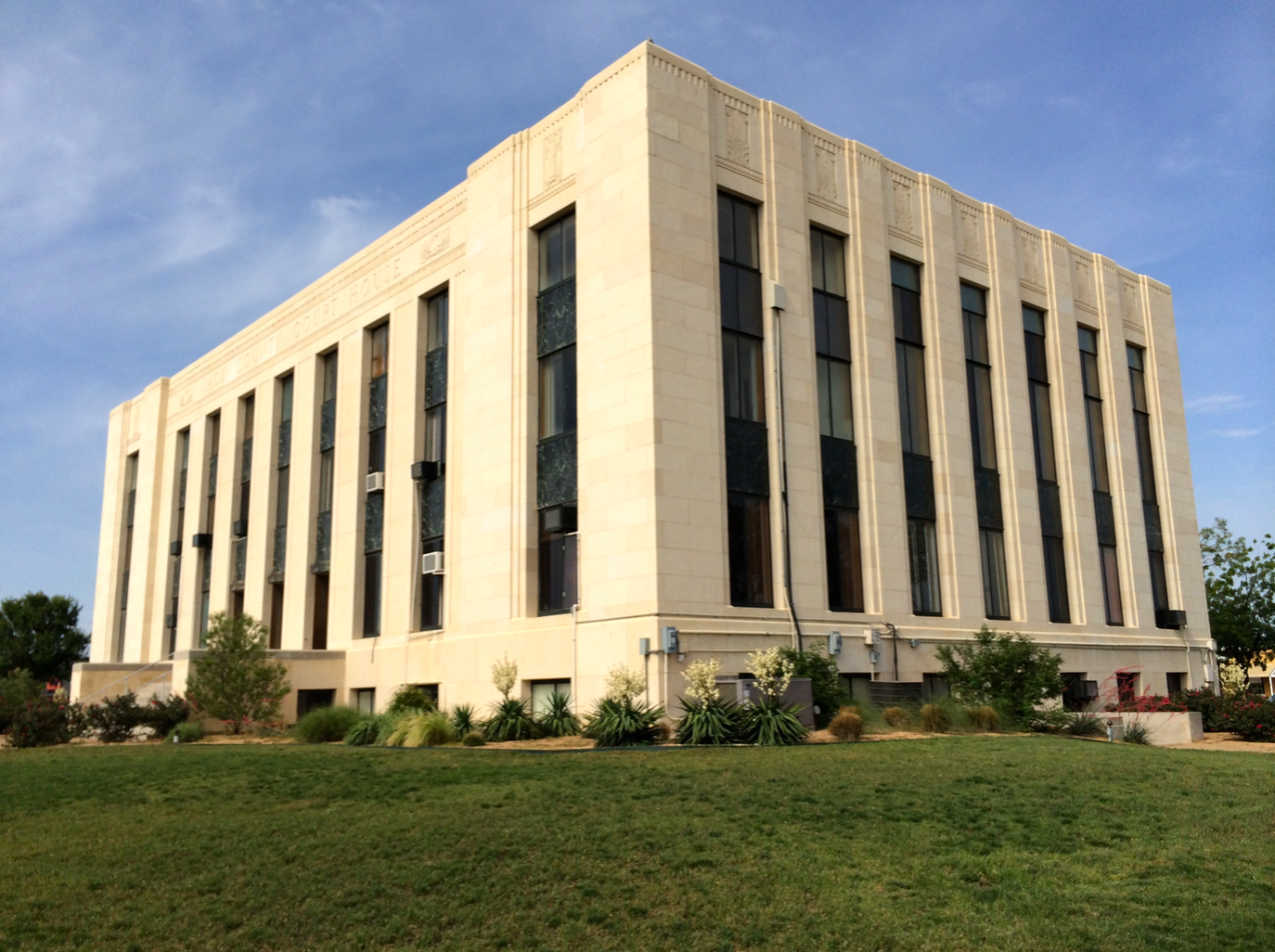 Of course, the “grand” assortment of air conditioners diminishes the appeal. 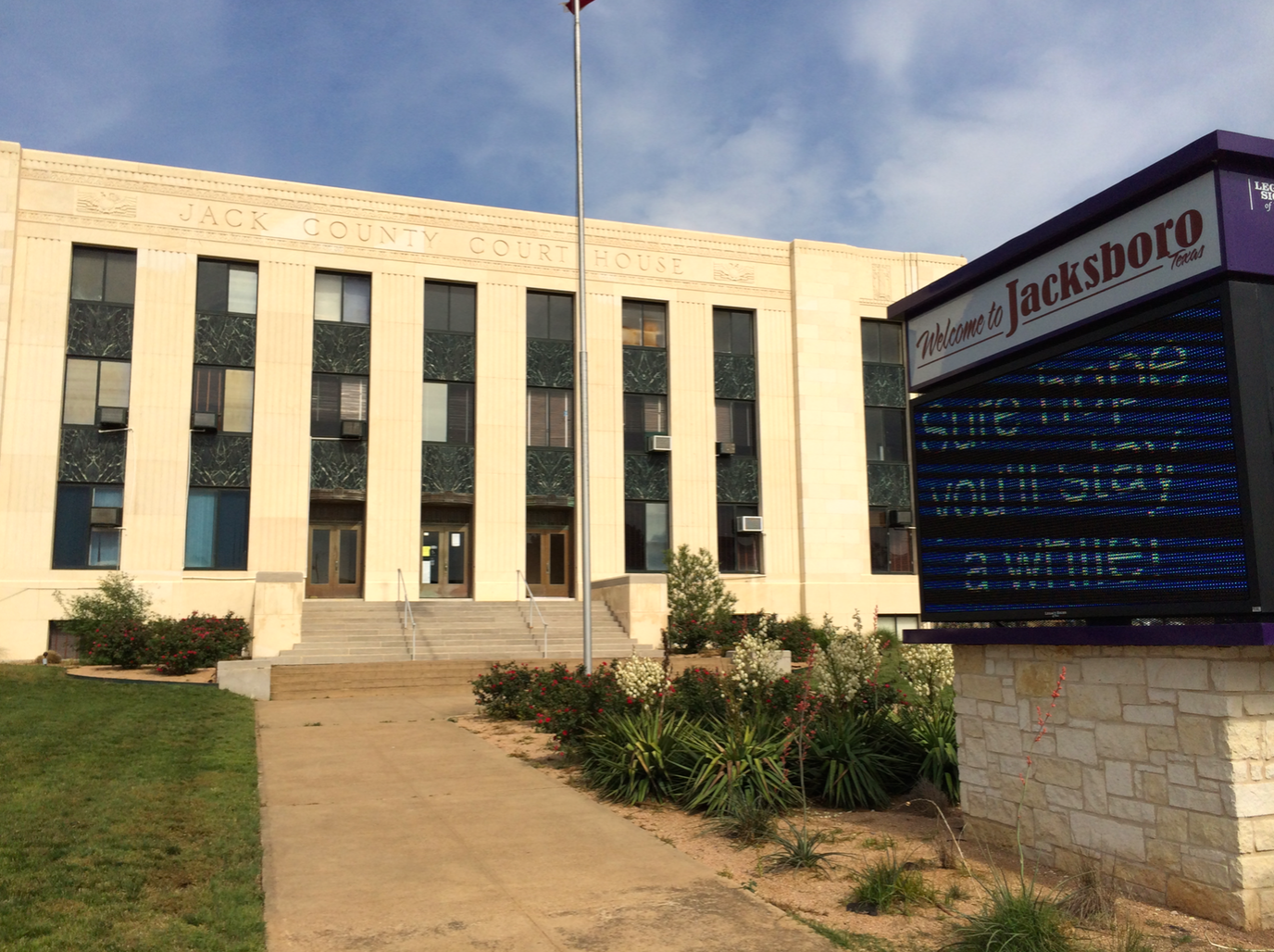 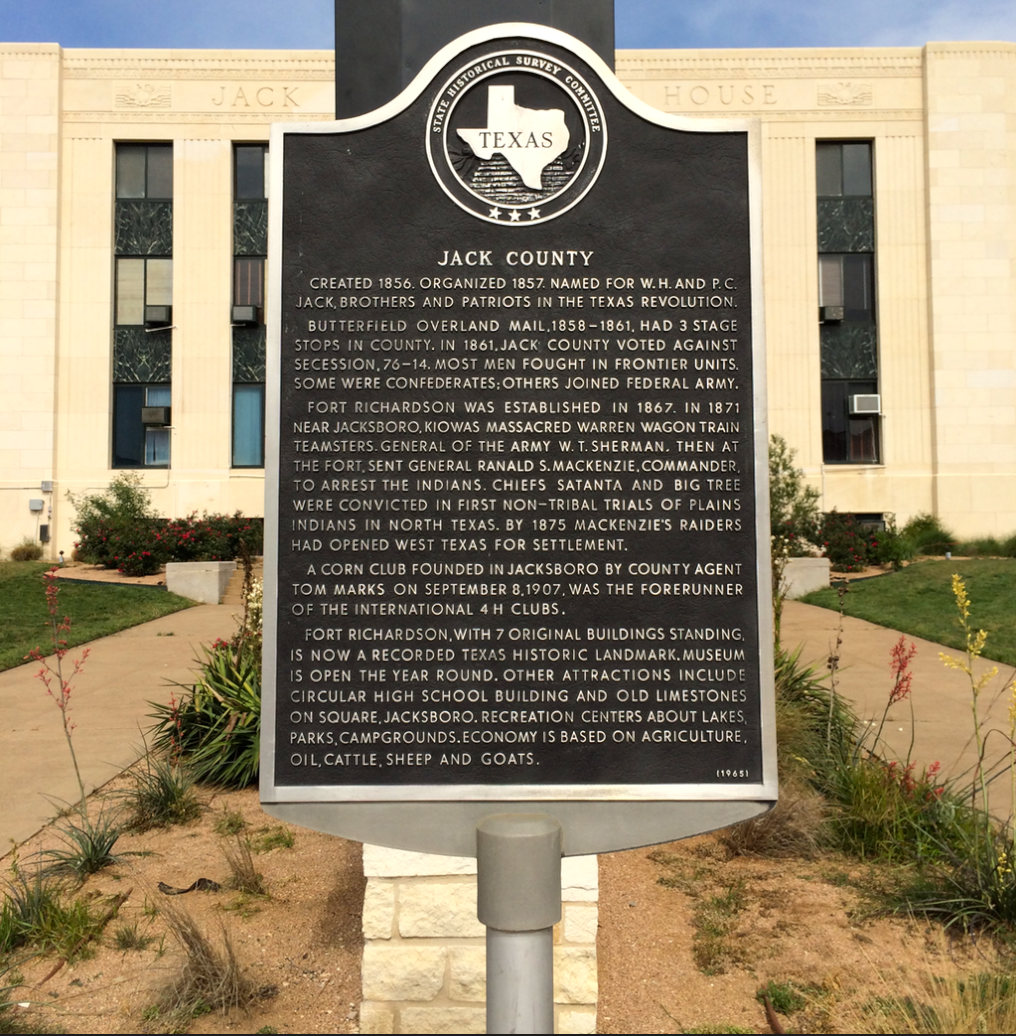 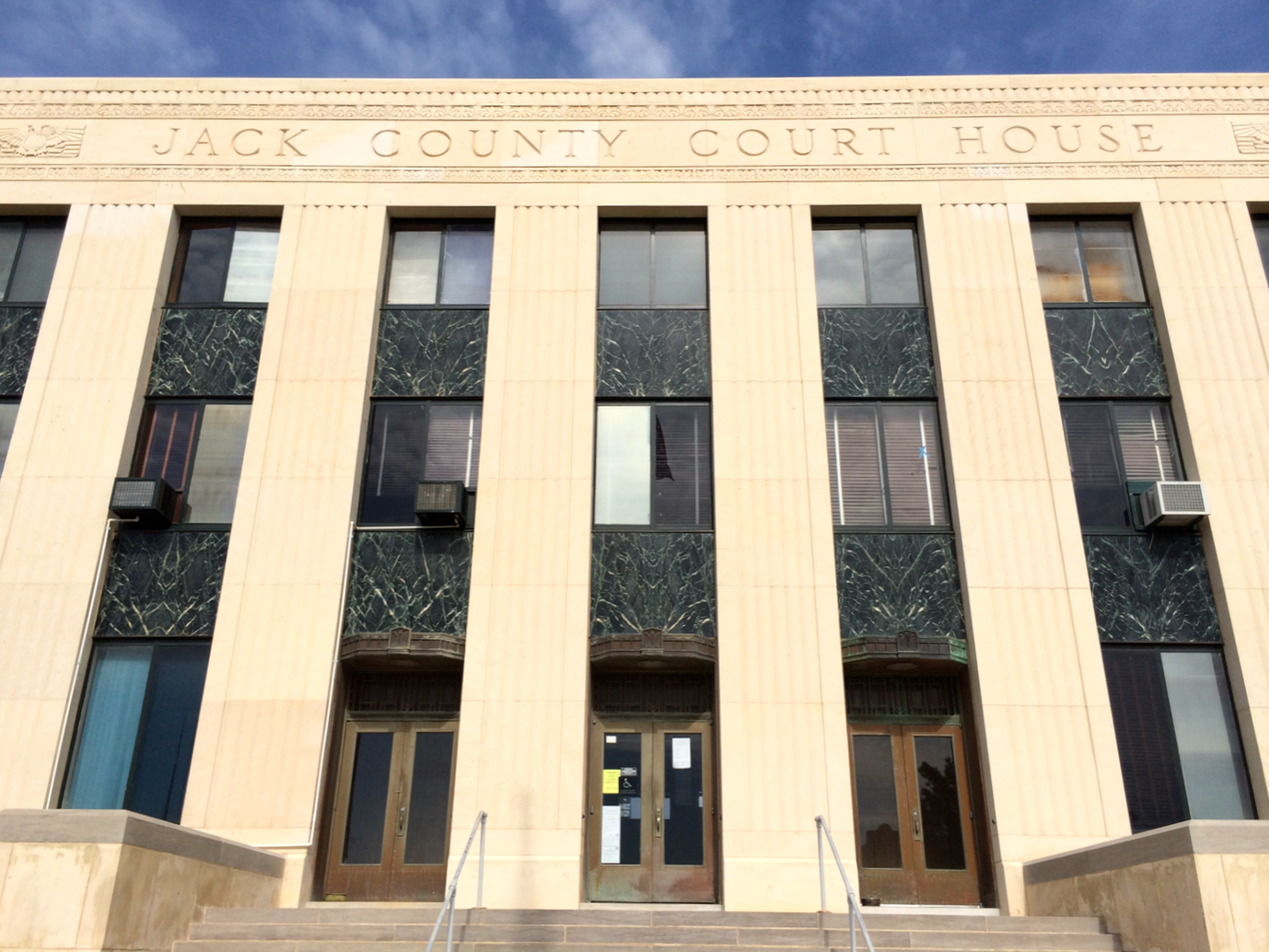 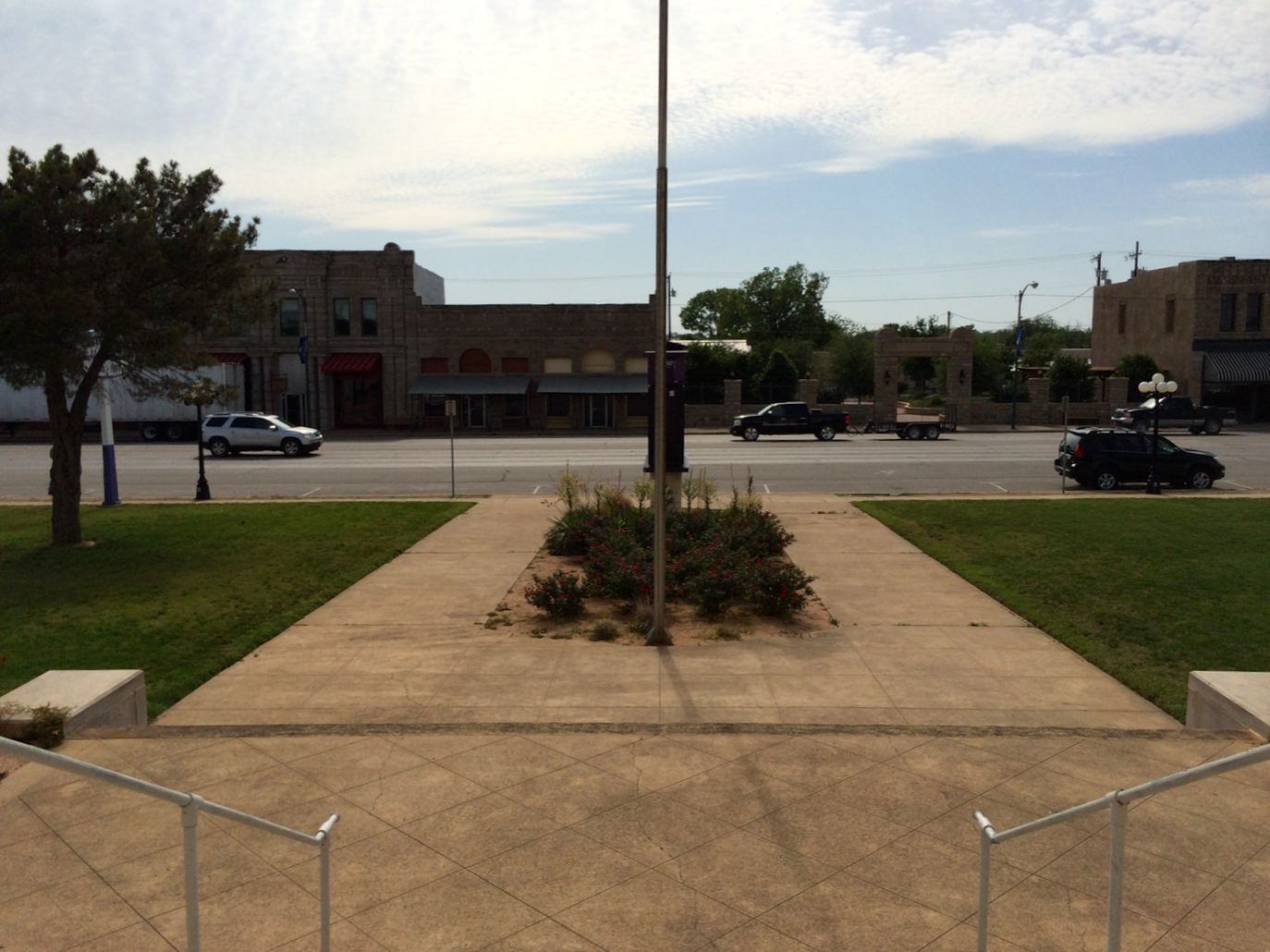 The view west from the main entrance 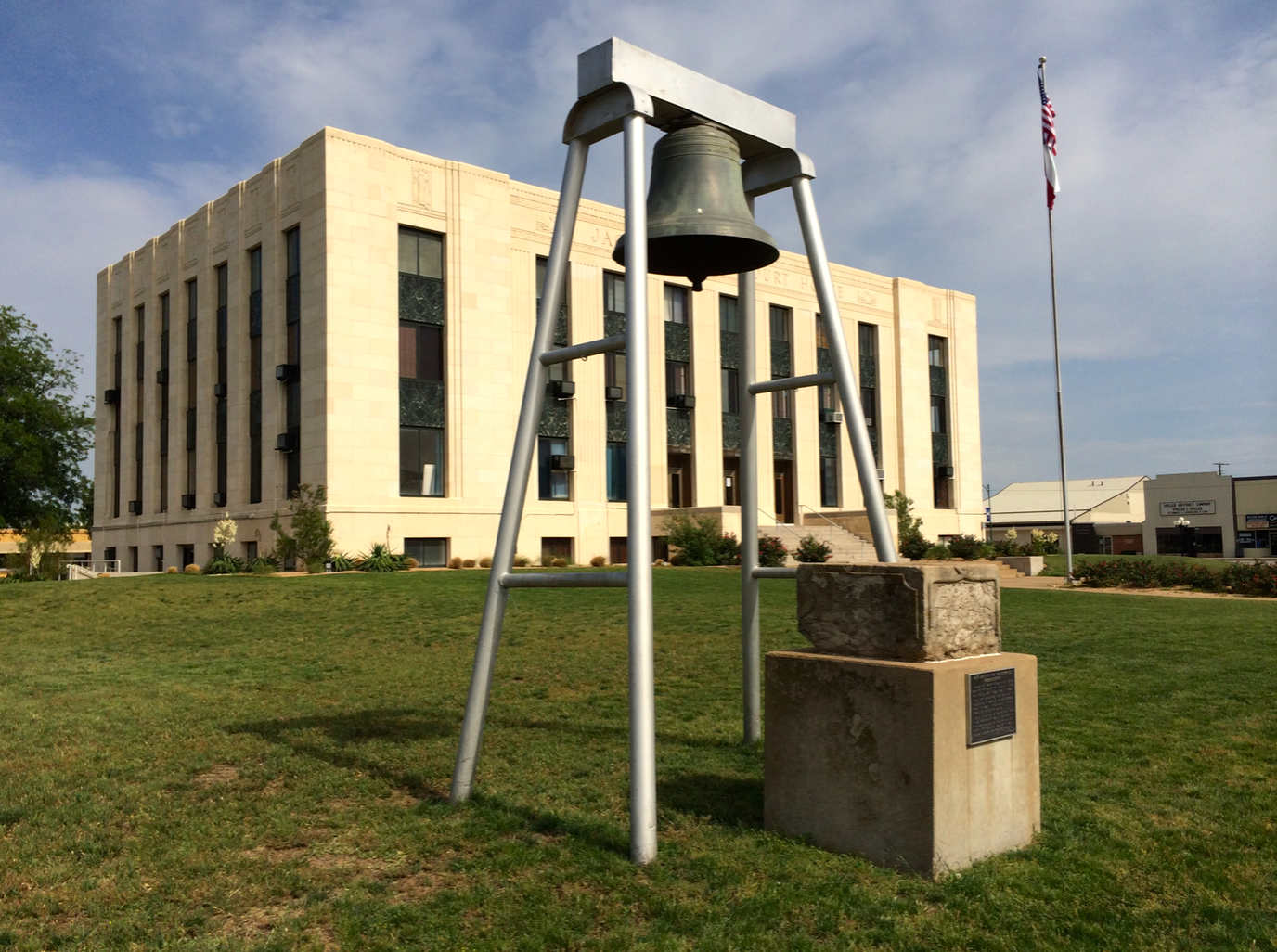 The historic bell and cornerstone from the 1886 courthouse are displayed on the northwest corner of the courthouse grounds. 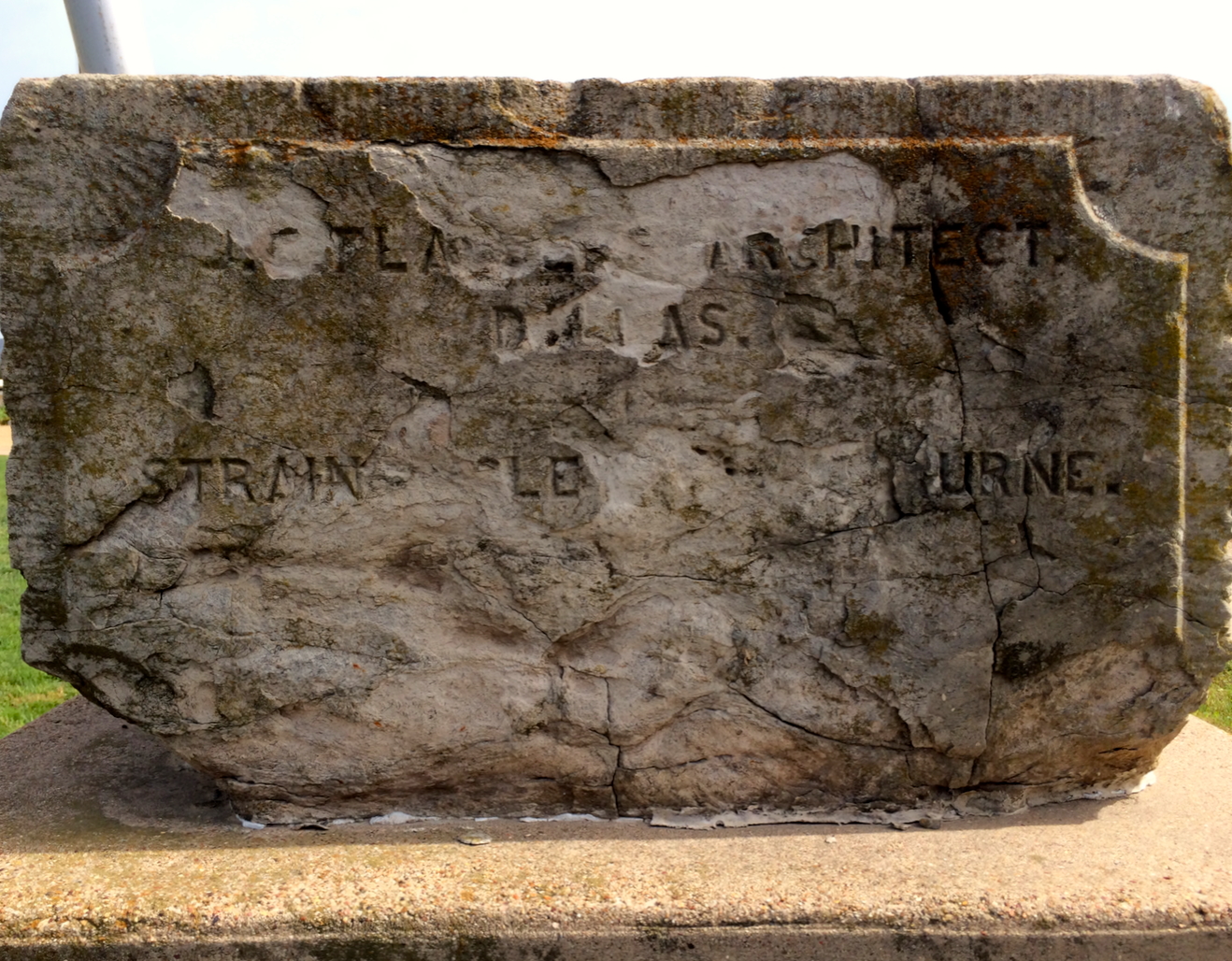 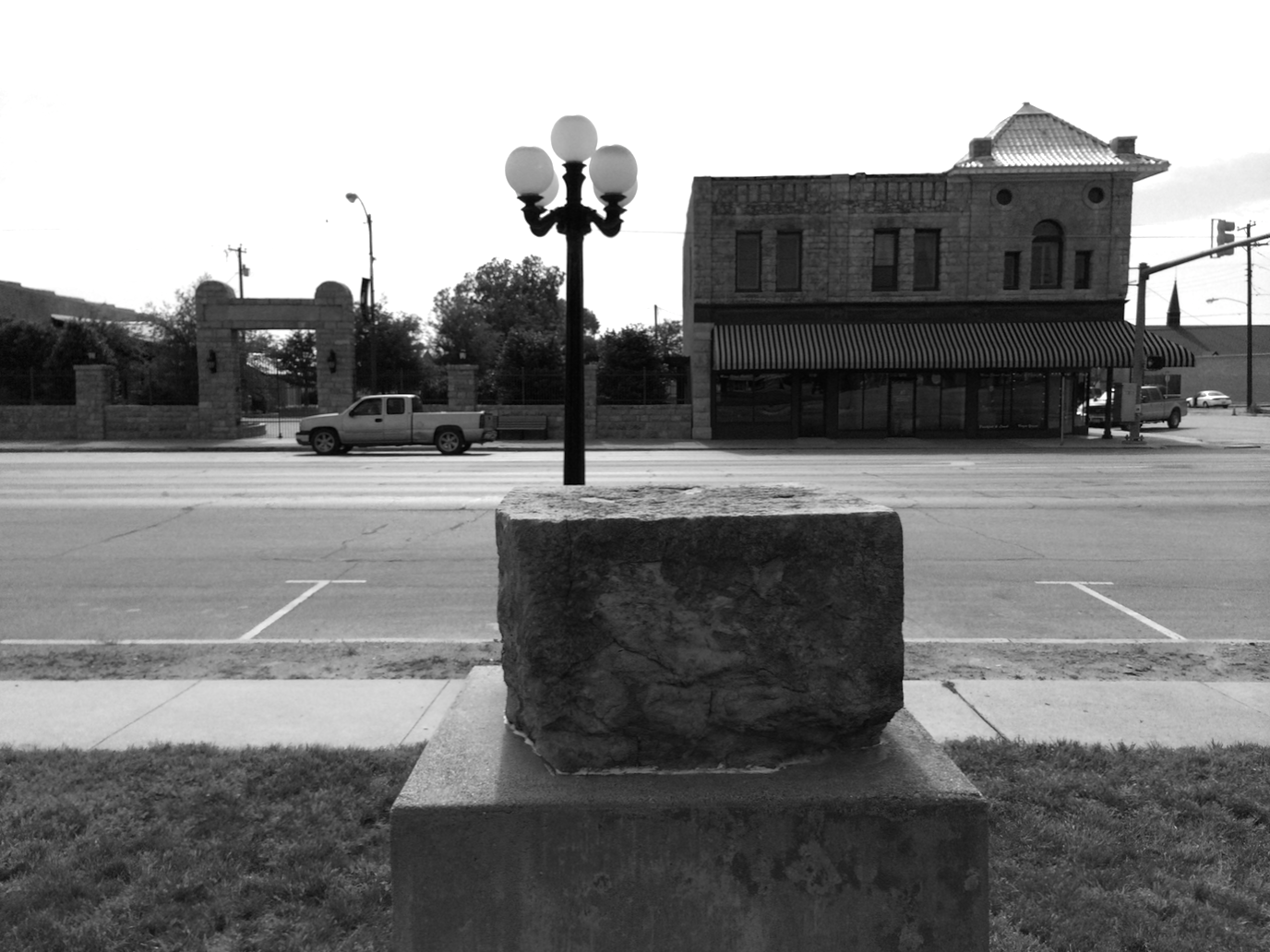 The rear entrance and eastern façade 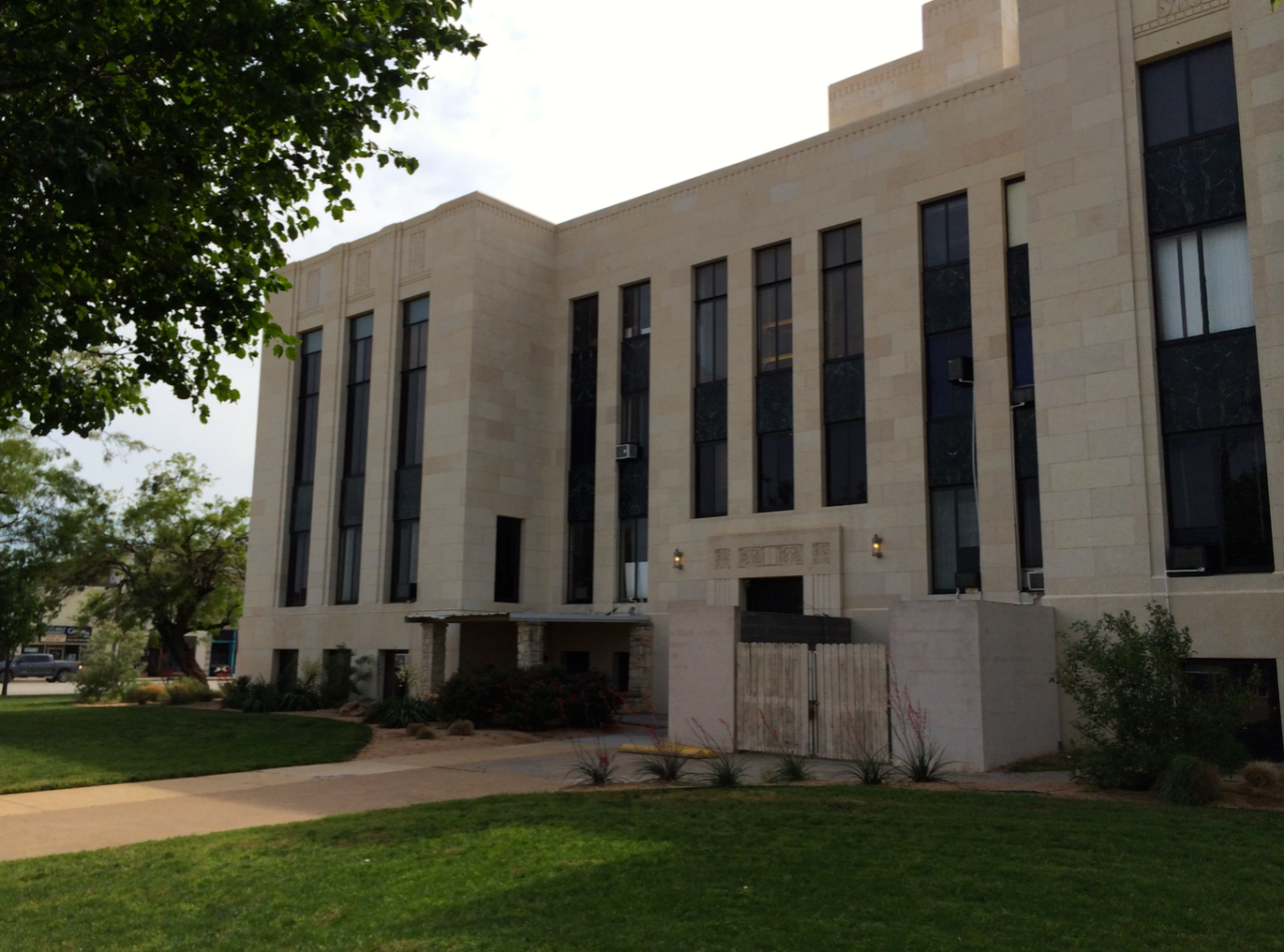 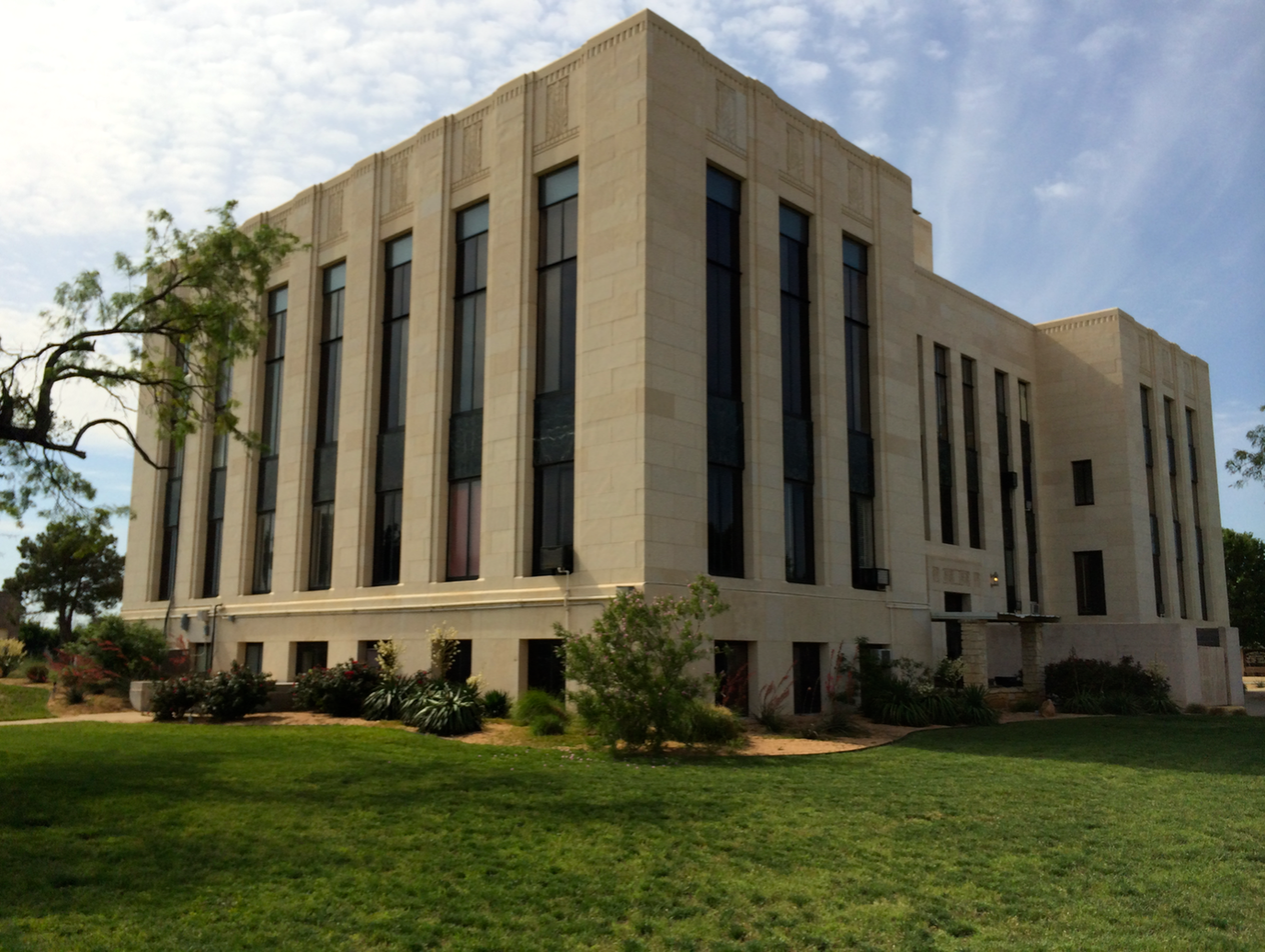 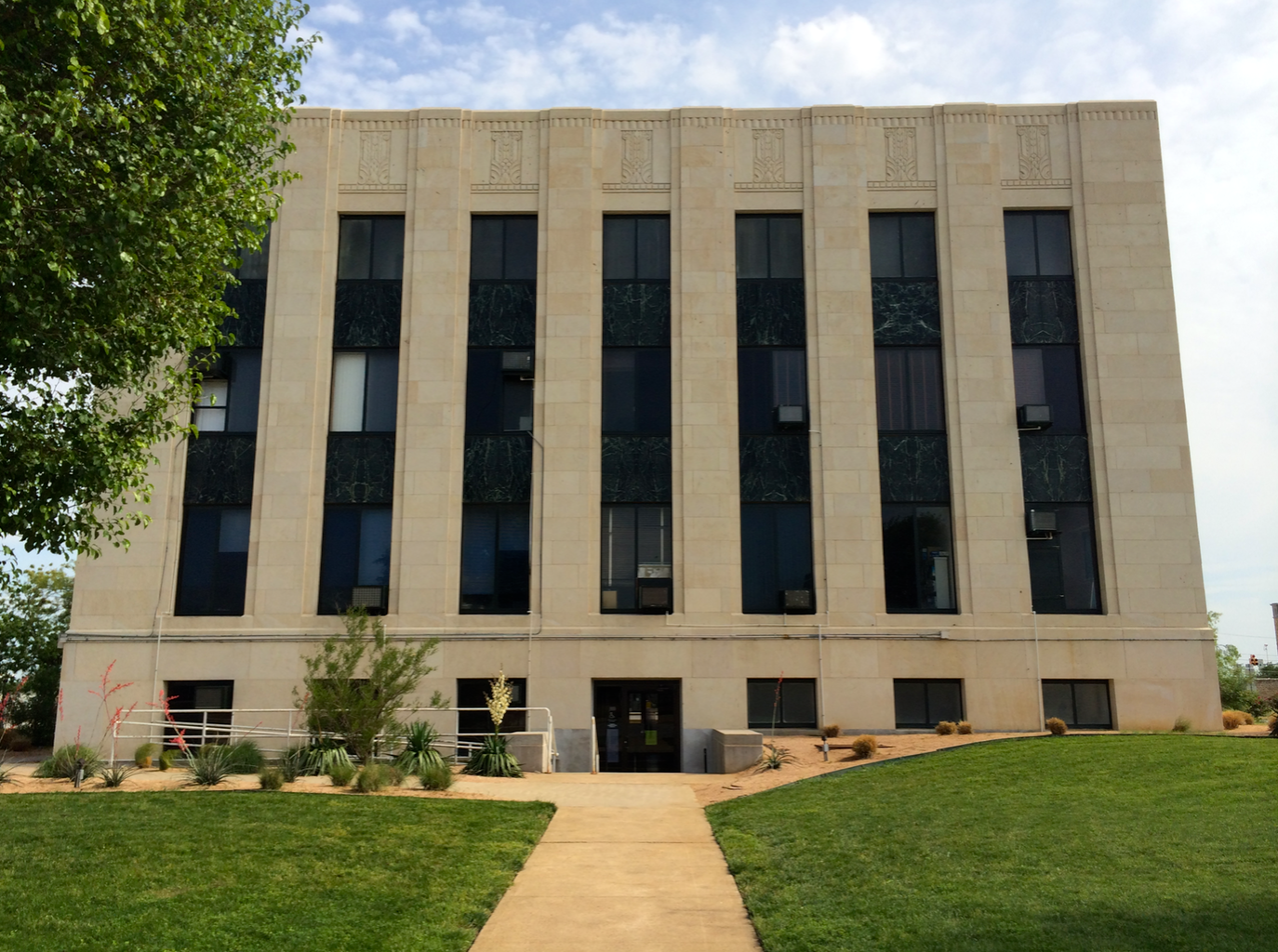 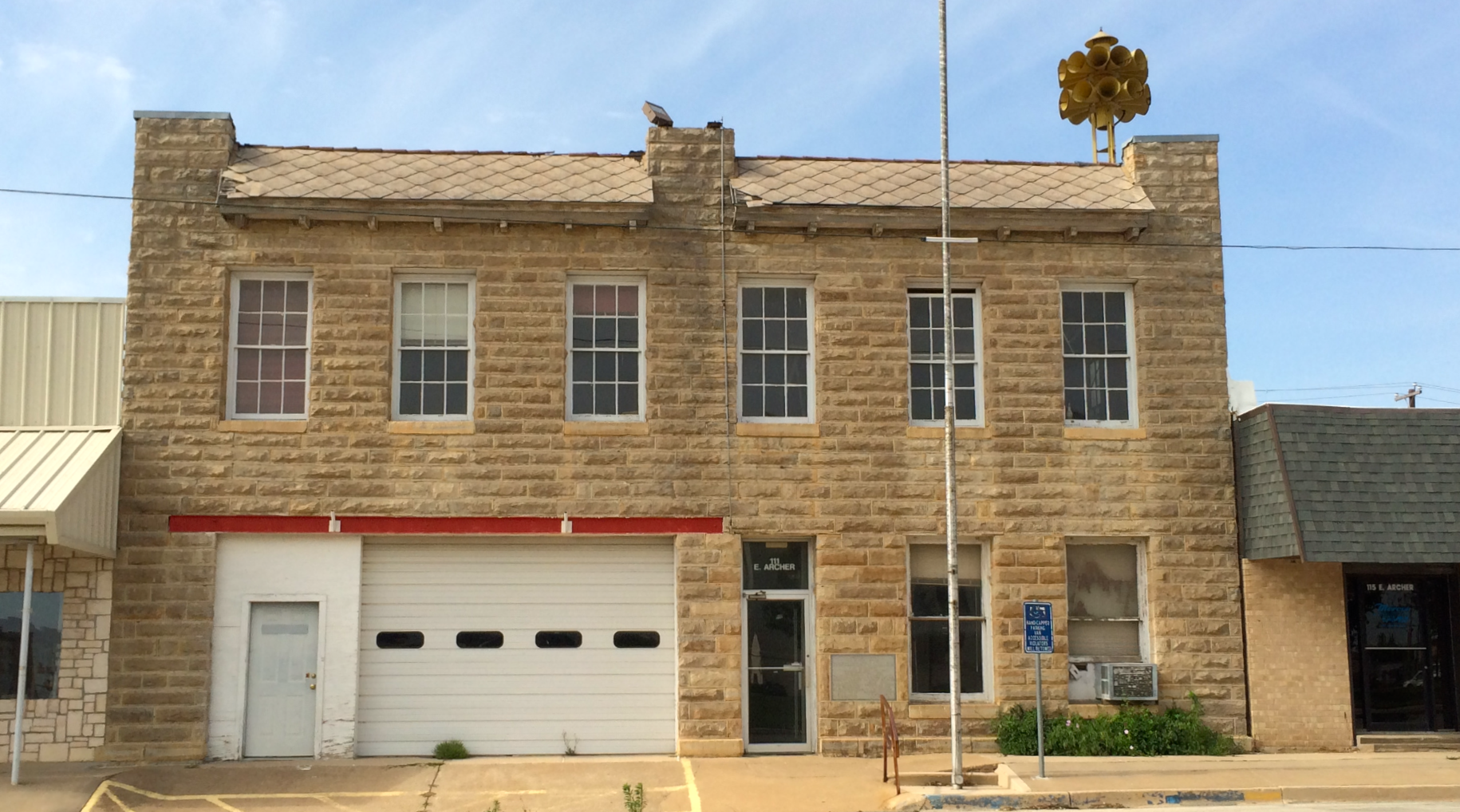 The retired Jacksboro Fire Station on Archer Street; get a load of that siren!