“The county embraces 1,359 square miles, partly on the Edwards Plateau and partly on the plain of the Rio Grande, which forms the southwestern boundary. The northeastern corner of the county is drained by the West Nueces River. The land is level to rolling in the south and rugged in the north along the Balcones Escarpment and the breaks of the Nueces River.Anacacho Mountain is in the southeast.”

“During the latter eighteenth century several Franciscans established a settlement on Las Moras Creek near the center of the county, and a small village and mill were still in evidence in 1834, when English empresarios John Charles Beales and James Grant attempted to establish an English-speaking colony called Dolores at the site. Streets were laid off and fifty-nine colonists were brought in, but the project was abandoned, and no other American settlement was attempted for another twenty years.” 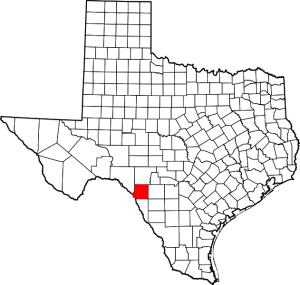 “Despite the region’s sparse population, the state legislature authorized the formation of the county from Bexar County in 1850 and named it for early settler and adventurer Henry Lawrence Kinney. In June 1852 the United States Army established a fort on Las Moras Creek, which it named Fort Riley; the name was changed a month later to Fort Clark, after John B. Clark, who had died in the Mexican War.”

“Brackett (now Brackettville) was established nearby the same year and named for Oscar B. Brackett, who came to set up a stage stop and opened the town’s first dry-goods store. Brackett became a stop on a stage line from San Antonio to El Paso, but the settlement grew very slowly because of continuous Indian attacks”

“Much of the county’s economy in the early postwar period was dependent on cattle ranching. In 1870 the county had 14,846 cattle, and large numbers of cattle were driven north during the great drives of the middle 1870s. Sheep ranching, however, gradually replaced cattle ranching during the 1870s; by 1880 sheep outnumbered cattle 55,597 to 7,966, and Kinney County became an important source of wool.”

“The construction of the Galveston, Harrisburg and San Antonio Railway (later the Southern Pacific) in 1883 gave the wool and mohair industry access to markets. At the same time it also helped to bring in numerous new settlers. By 1884 Brackettville had an estimated population of 1,400, Catholic and Methodist churches, three schools, a bank, a weekly newspaper, the Brackett News, Masonic and Odd Fellows lodges, and a daily stage to Spofford.”

“The onset of the Great Depression brought a marked downturn in prices for wool and mohair, and by the early 1930s many ranchers and other residents of Kinney County found themselves economically strapped. A large Civilian Conservation Corpscamp constructed adjacent to Fort Clark helped to employ some people, but the economy did not completely recover until the onset of World War II, when wool and mohair were once again in demand for the defense industries.”

Alamo Village, north of Brackettville, was a full-size replica of the Alamo complex the way it might have looked in 1836. It was used for several movie productions, most notably The Alamo itself starring John Wayne. It was a popular tourist destination for many years before it permanently closed a few years ago. Between Brackettville and Rocksprings, we took FM 674 to get a look at what was left of Alamo Village. The gates are padlocked, but the old faded signs are still standing (barely) as is the ticket booth at the entrance.

I was the guest of Brackettville and Kinney County on August 15, 2013. 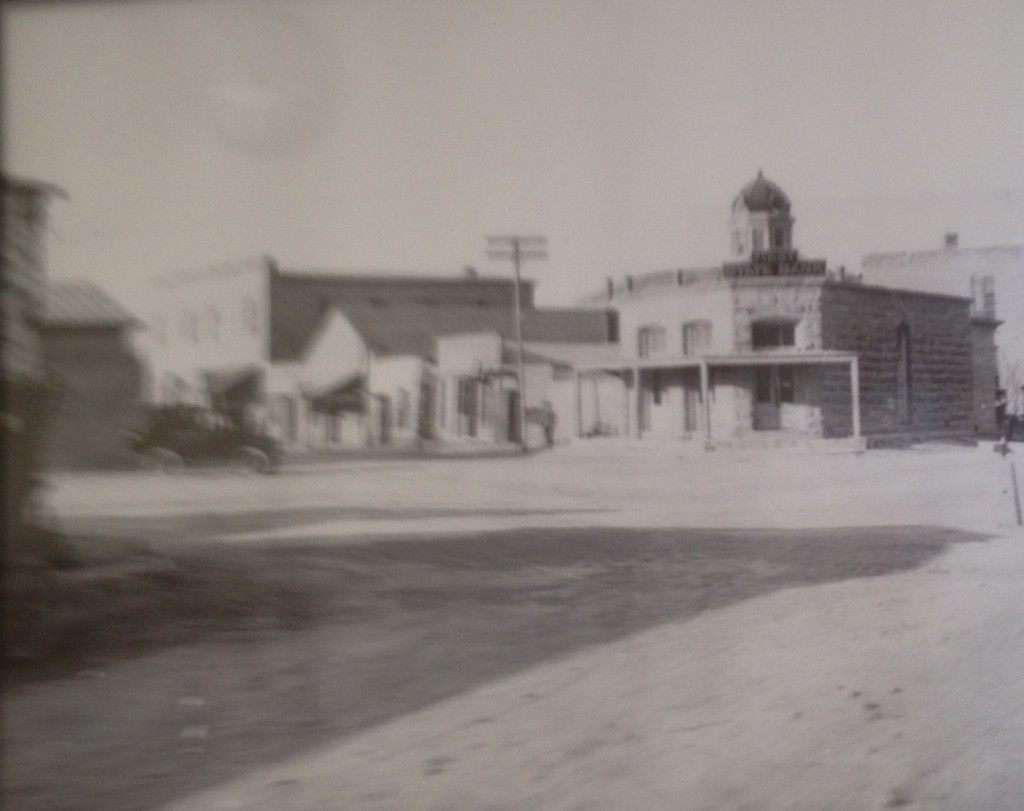 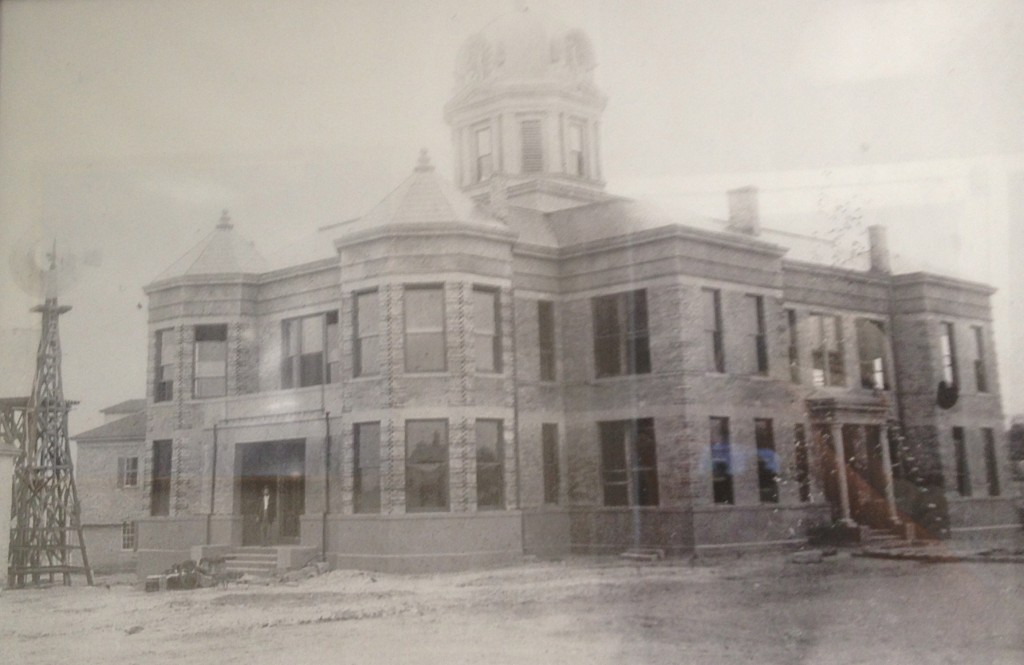 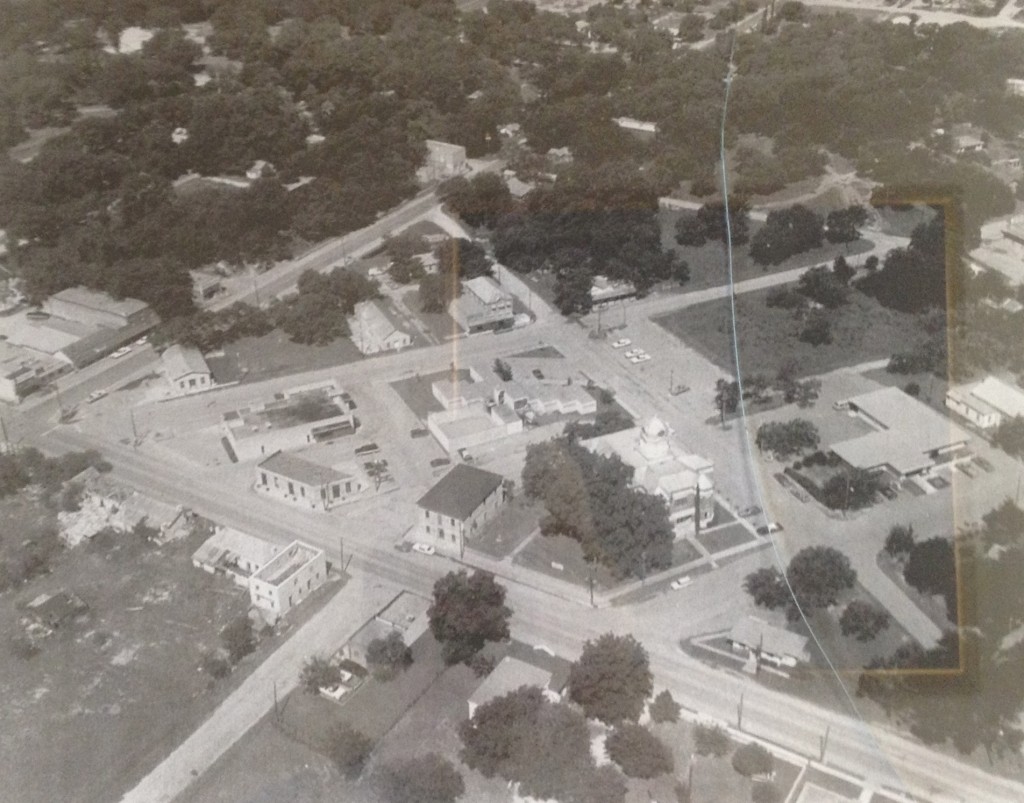 Vintage photographs hanging on the wall inside the courthouse. Mind the glare. 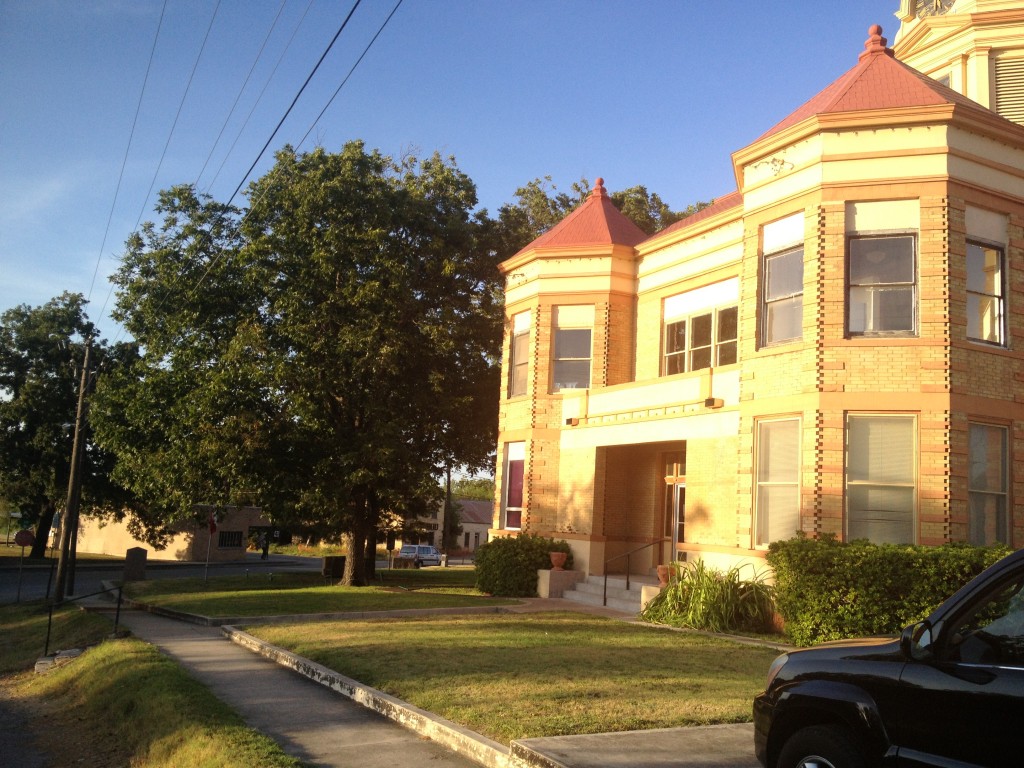 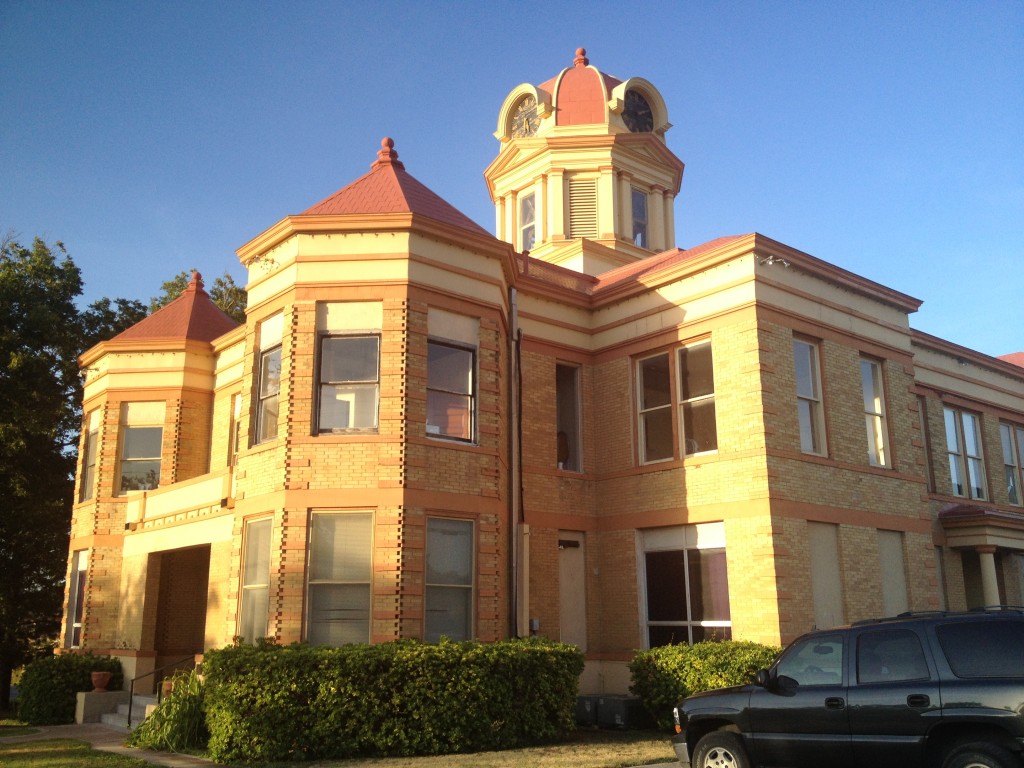 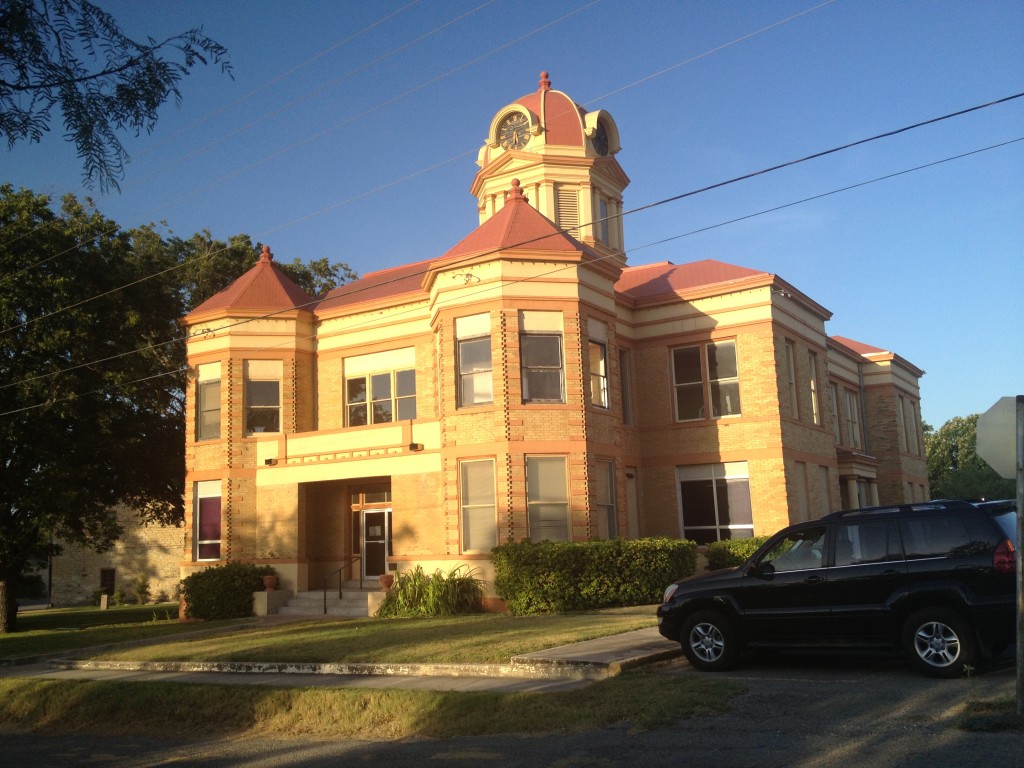 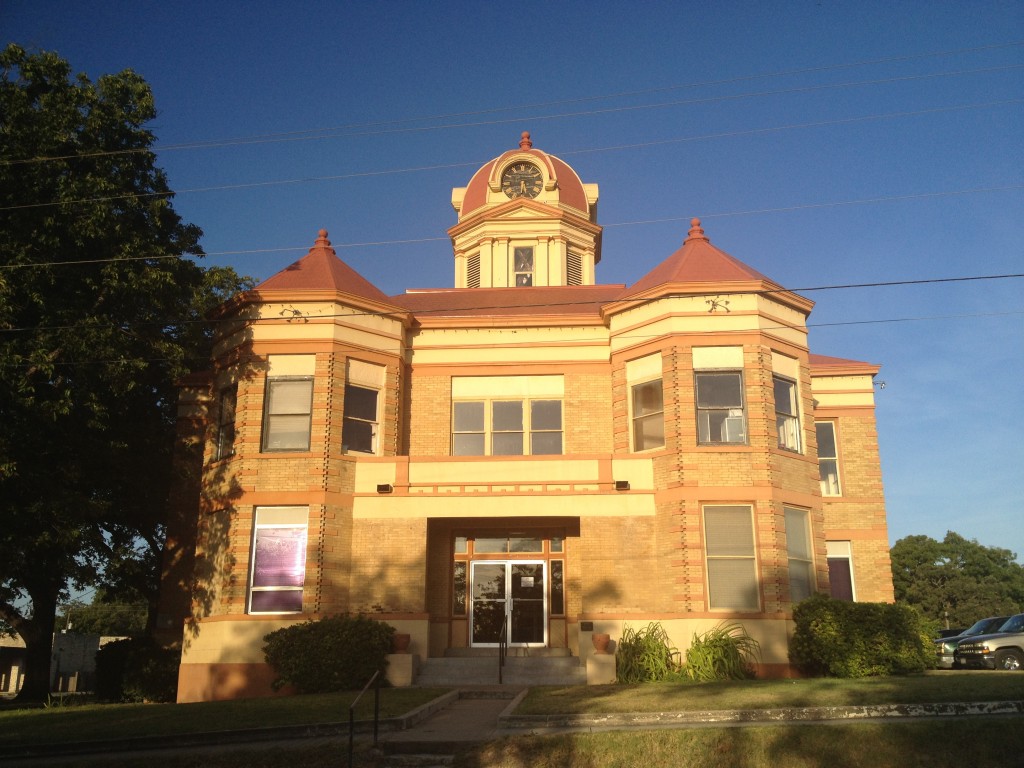 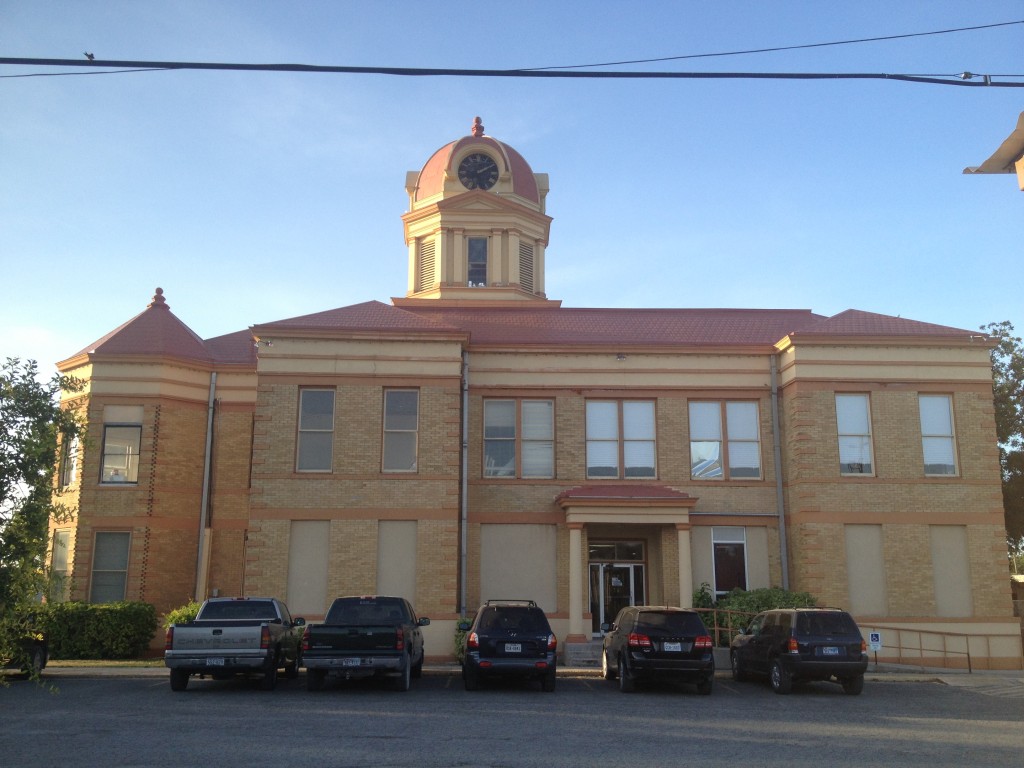 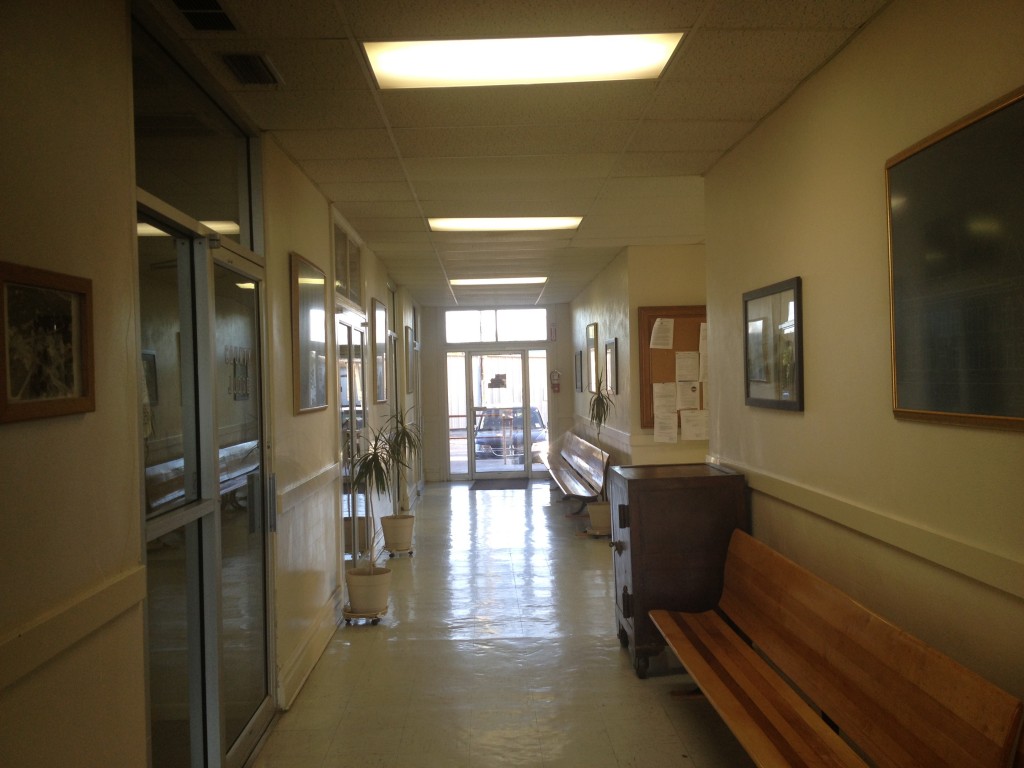 The clock system is still in place and functional, but unfortunately, per the words of a courthouse worker, the county does not have someone to constantly wind it. 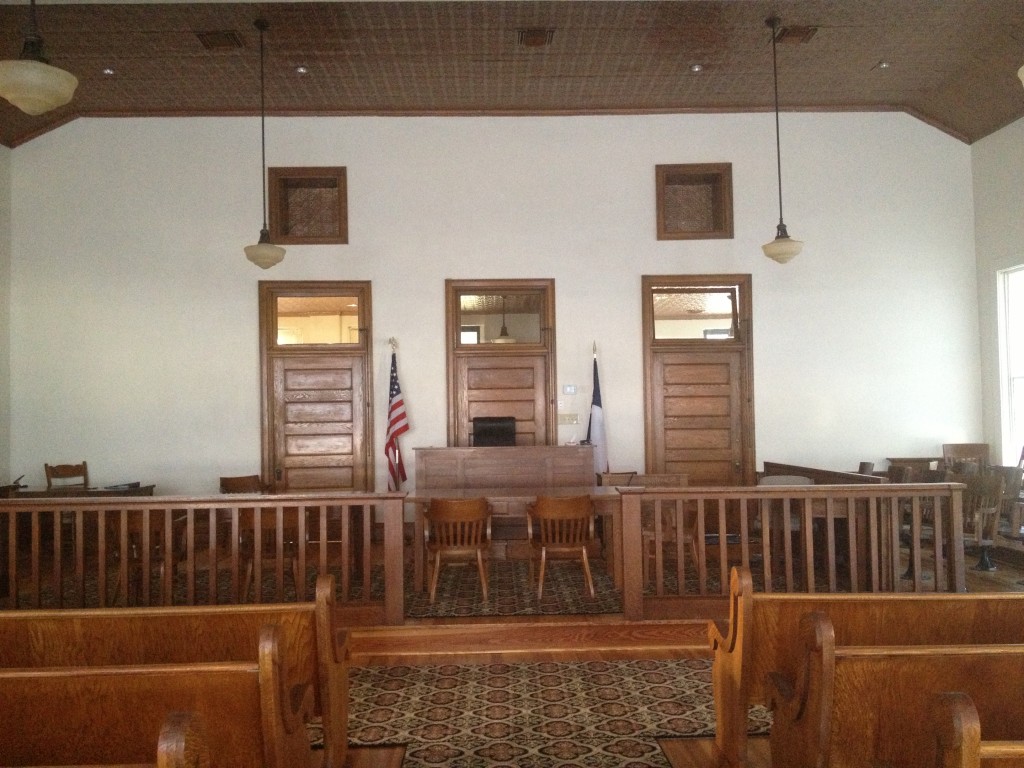 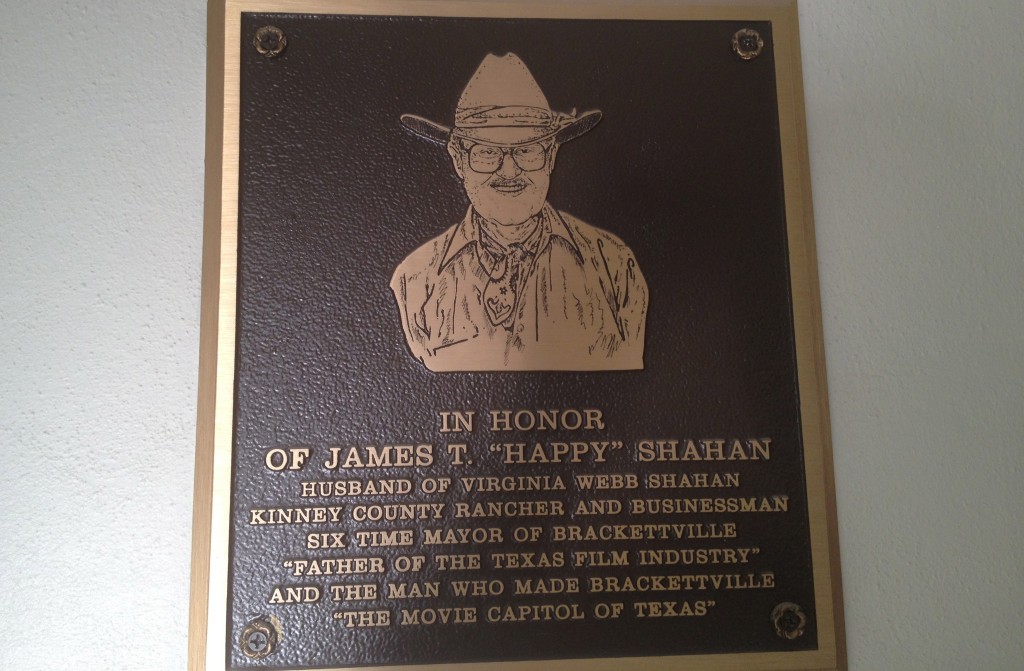 In addition to being the six time mayor of Brackettville, James T. “Happy” Shahan owned, operated, and built Alamo Village. 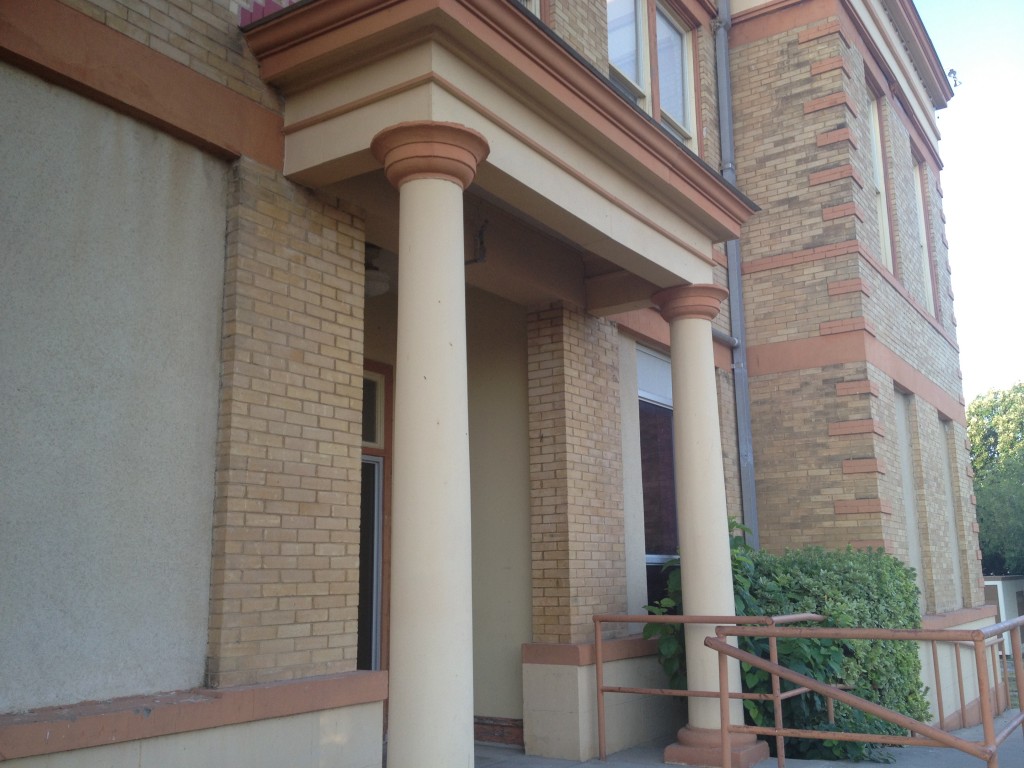 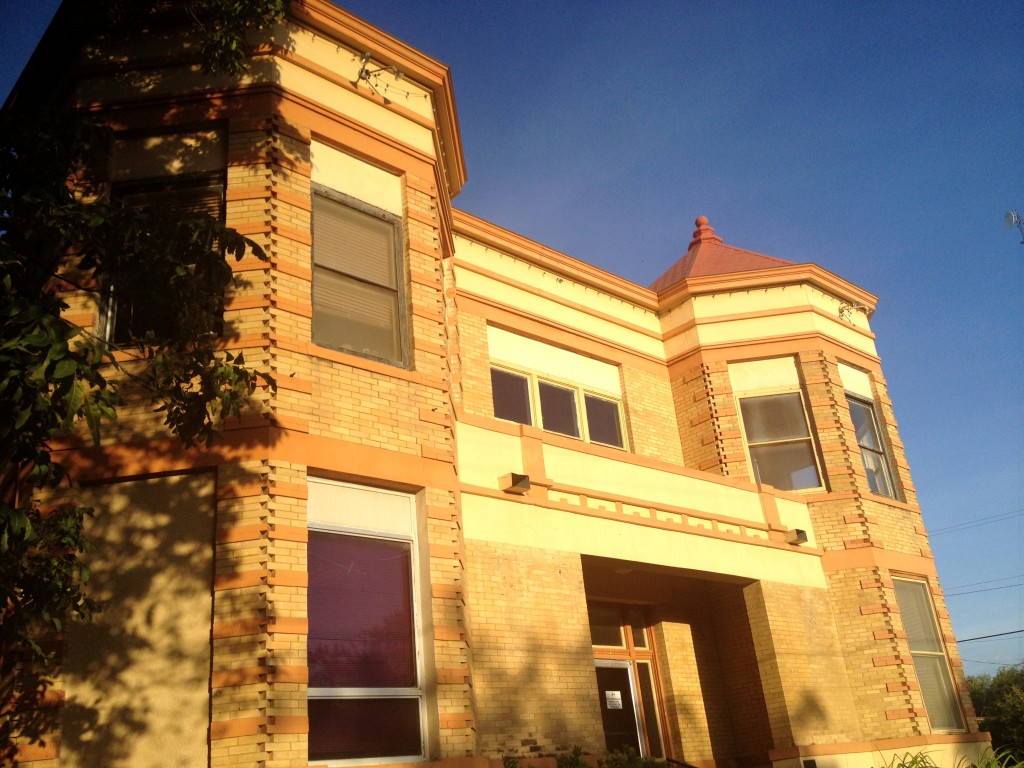 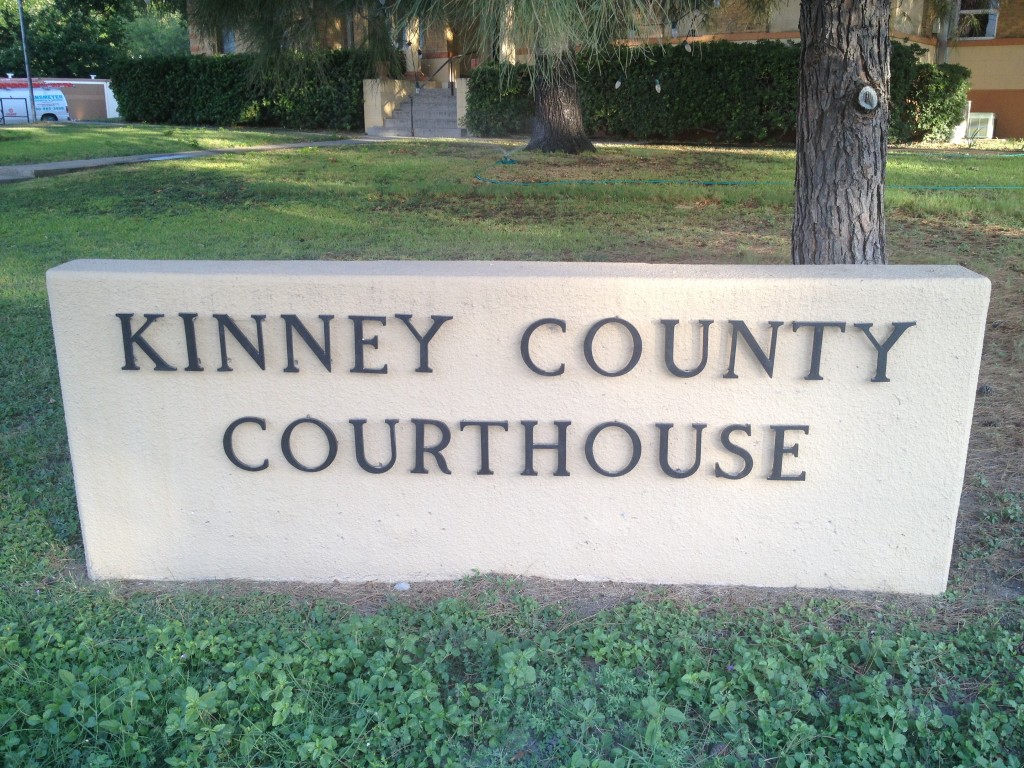 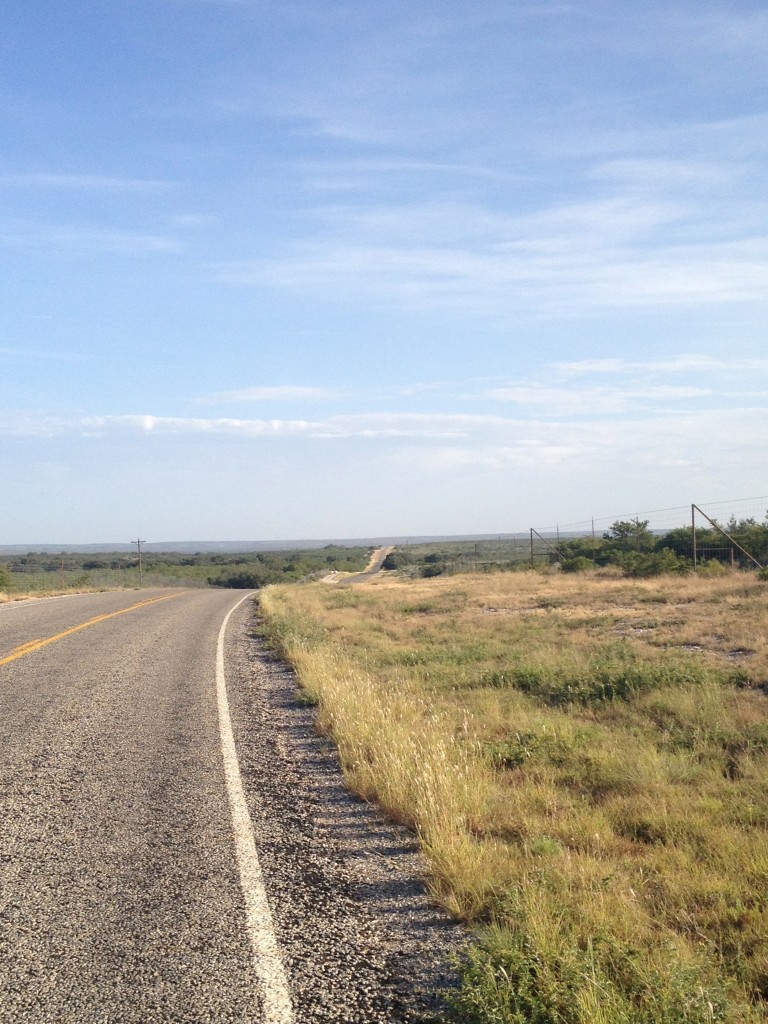 Leaving Brackettville on FM 674, headed for Alamo Village and Rocksprings 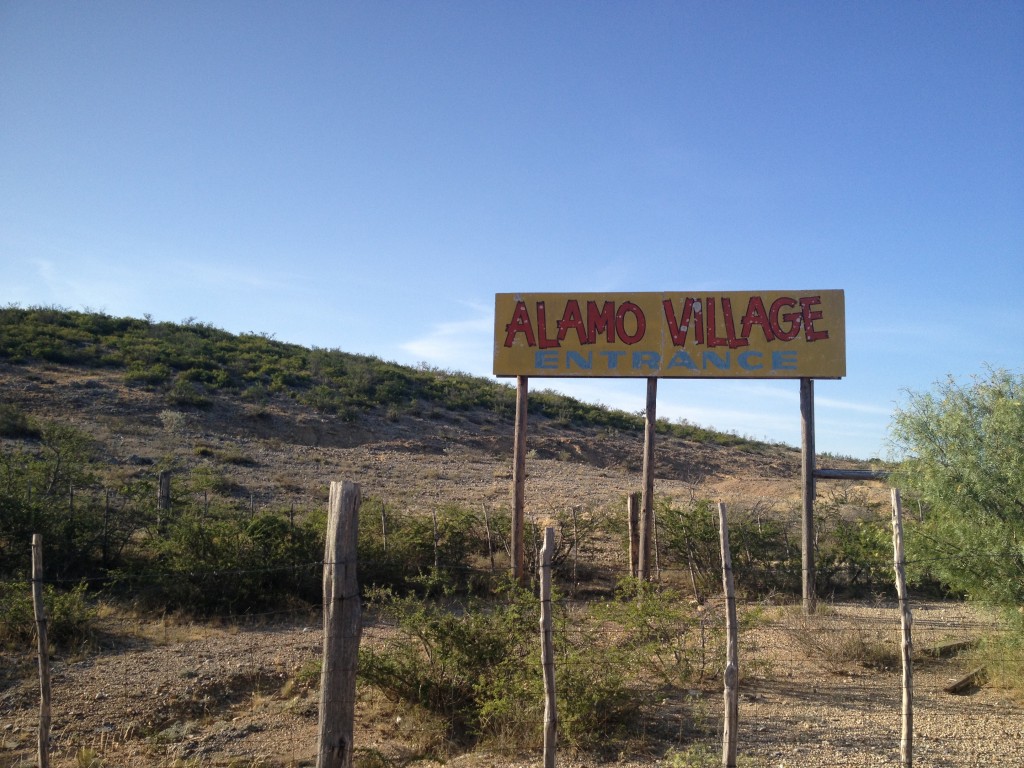 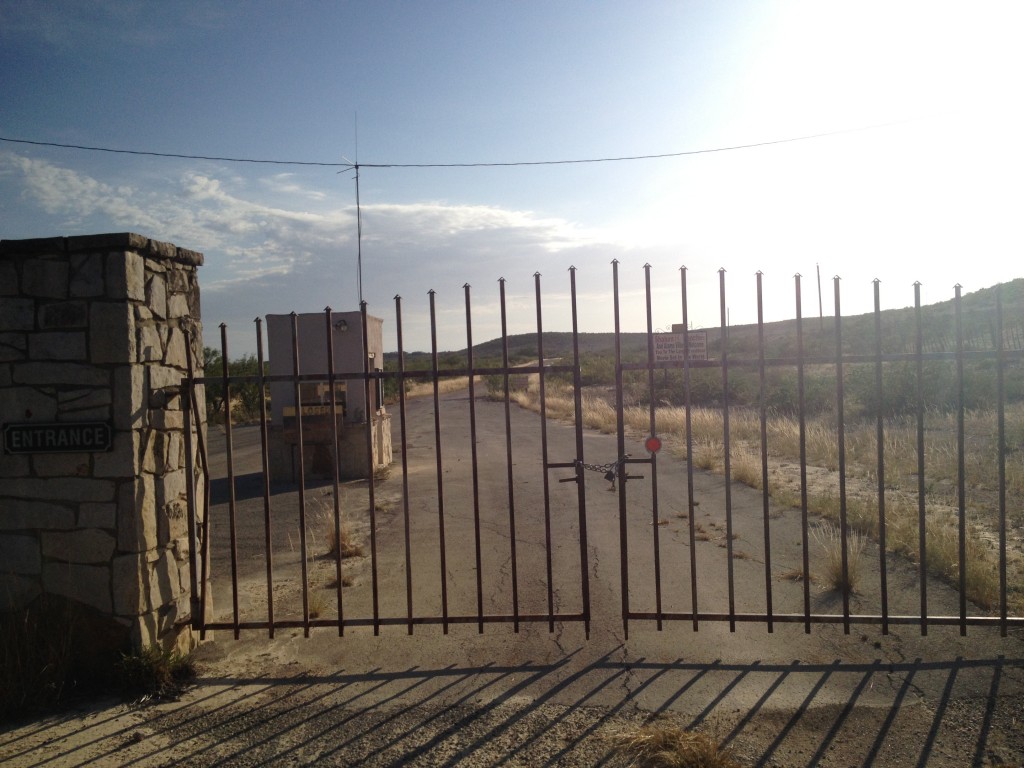 This locked gated symbolizes an end of an era.