“McLennan County was part of the colonization grant obtained by Robert Leftwich from the Mexican government in 1825 and was later part of Robertson’s colony. One of the first land grants made in the area of McLennan County was to Thomas Jefferson Chambers on April 26, 1832. Although several surveying expeditions ventured into the county district through the 1830s, permanent settlement was delayed until the 1840s by the threat of Indian raids.”

“The Republic of Texas tried to establish local government in the region in 1842 by establishing a judicial district known as Waco County, but later that year the Texas Supreme Court declared such counties unconstitutional. In 1844 and 1845 representatives of the republic held talks with several Indian groups at a site near the Torrey Trading Houses (see TEHUACANA CREEK COUNCILS). Following the annexation of Texas by the United States, settlement of the area proceeded rapidly.”

“Plans for a permanent townsite at the former Waco Indian village were made in 1848, when Jacob Raphael de Cordova and several others became involved in a project to sell land in the area at a dollar an acre. The townsite was laid out in 1849, and George B. Erath, one of the surveyors for the project, suggested Waco Village as the name of the settlement, in honor of the previous inhabitants. The sale of town lots was very successful, and a small business district began to develop.”

“McLennan County was established by the Texas legislature on January 22, 1850, and named for Neil McLennan, one of the early settlers. The county government was organized in August 1850 with Waco as its county seat. The county originally included its present area, as well as the land to the northwest as far as the northern boundary of the Robertson colony; it was reduced to its present size in 1854, when Bosque County was established. Although McLennan County was organized too late to be included in the 1850 census, its population at that time has been estimated at several hundred.” 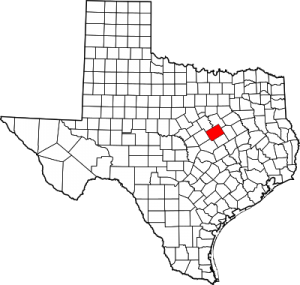 “Aside from Waco, the earliest communities in the county were at Bosqueville and Bold Springs (later called West). Most of the settlers who came to the county before the Civil War were Americans of English, Scottish, and Irish descent who moved from other parts of Texas or from the southern United States. Many of them were well-educated, well-to-do people with money to invest in the establishment of new towns, schools, and churches.”

“Like most areas in the South, McLennan County suffered a severe economic decline immediately following the Civil War and throughout the Reconstruction period. Between 1863 and 1866 the county experienced a 73 percent loss in property tax receipts. A little more than 38 percent of the total property loss was in slaves; the rest came from declines in total farm acreage, farm value, and livestock value, each of which fell 45 to 70 percent by the time of the 1870 census. Recovery was slow because transportation was poor and the economy was so dependent on agriculture.”

“The completion of the Waco Suspension Bridge in 1870 provided a reliable means of crossing the Brazos River and made Waco a major center for trade. The Waco and Northwestern Railroad passed through Waco in 1872, laying track from Bremond to Ross and thereby giving McLennan County access to markets through the Houston and Texas Central.”

“With the railroads came new towns such as McGregor, Moody, Crawford, Lott, Bellmead, Hewitt, Riesel, Battle, Leroy, and Axtell; other towns, like West, Eddy, Mart, Hallsburg, and Elm Mott, were already in existence when the railroads built through and profited from the increased economic opportunity; still other communities, like Perry, Mastersville, and Elk were bypassed by the railroads and faded as their populations were drawn to more convenient locations.”

“World War I brought Army Camp MacArthur and Rich Field to Waco in 1917, and the resulting growth in business and population shifted the urban/rural balance of the county. For the first time the number of people living in cities and towns was greater than the number of people living in the country. Waco’s population doubled in the late 1910s, and support services grew rapidly to meet the demand of the larger population.”

“The Great Depression of the 1930s, complicated by severe drought conditions in much of the area, slowed the county’s growth considerably. Cotton prices fell from 18 cents a pound to 5 cents between 1928 and 1931. Some city residents moved to the country to find food; some rural residents moved to the city to find work. Waco’s population increased by only 2½ percent between 1930 and 1940; the county as a whole grew by only 3 percent.”

“In the years following World War II Waco and McLennan County experienced a resurgence of population growth, and the transition to a peacetime economy went fairly smoothly. In 1950 130,194 people resided in McLennan County; 65 percent of that total lived in Waco. The county, and especially Waco, experienced a serious setback in May 1953, when a tornado struck the downtown area.”

“Nearly 60 percent of the county’s agricultural receipts came from livestock and livestock products, the most important ones being turkeys, cattle, milk, sheep, wool, angora goats, mohair, and hogs. Industries in the county surpassed agriculture in terms of income and number of people employed, but the two spheres were closely interrelated. Poultry processing, manufacture of prepared feeds, and dairy production were among the county’s important businesses.”

“Waco has a number of tourist attractions, including the Texas Ranger Hall of Fame and Museum, the Texas Sports Hall of Fame, and the Dr. Pepper Museum; and President George W. Bush’s “western White House” on his ranch near Crawford has drawn international attention to the area.”

I was the guest of McLennan County and Waco on December 29, 2010 and returned to rephotograph the courthouse on June 12, 2014. 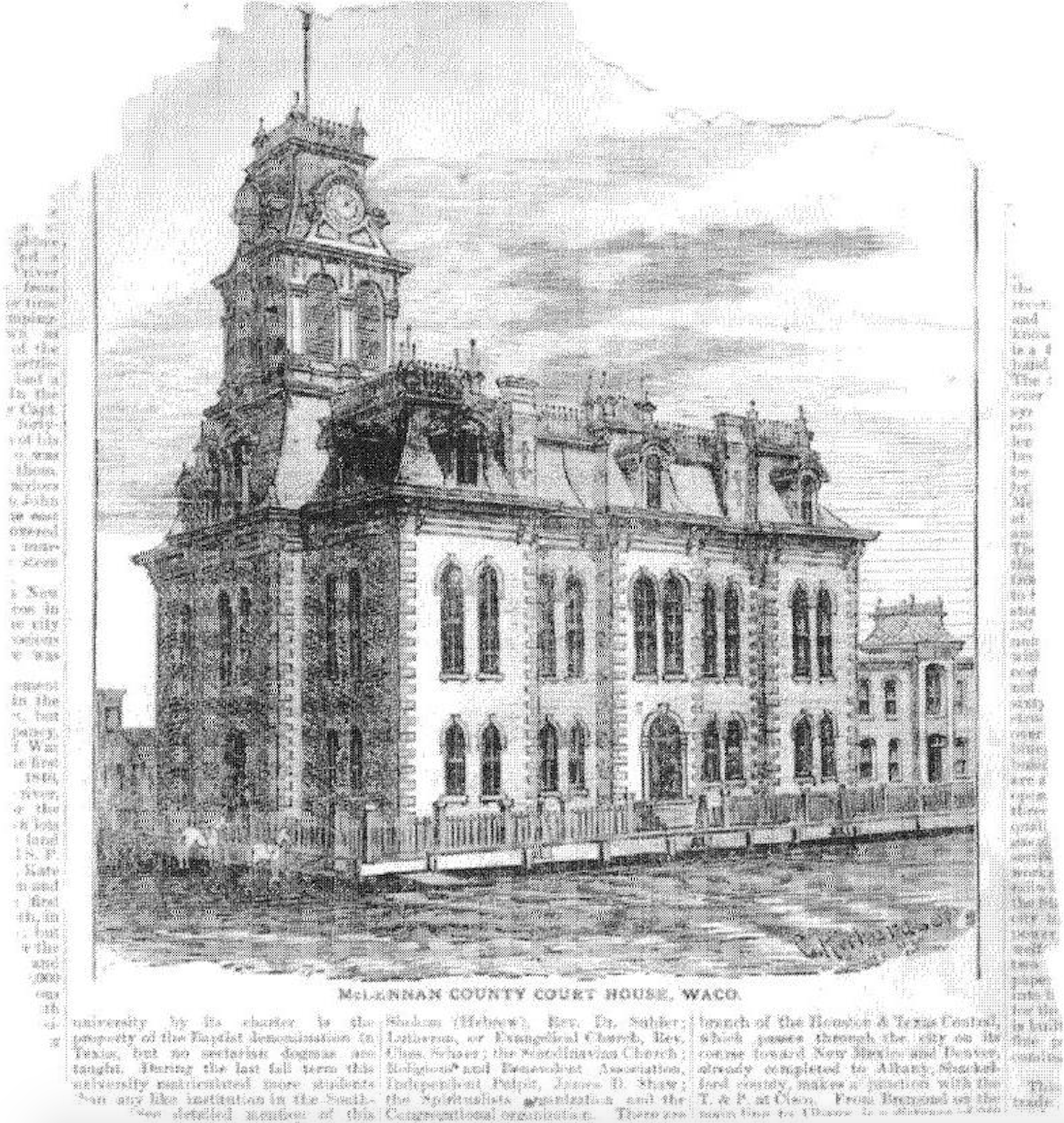 This was the third courthouse of McLennan County, though the first in which a drawing/photo survived. In the 1870s, the county sought a new courthouse and jail because of structural problems with the previous one (completed in 1856). Such problems included a reported two fatalities as the result of faulty doors on the second story. Yikes.

W.C. Dodson, who would become one of the most celebrated architects in North Texas, rose to the occasion and created the design for this lovely building. It was constructed by the teams J.W. Mann & Brothers and Trice & Harris. 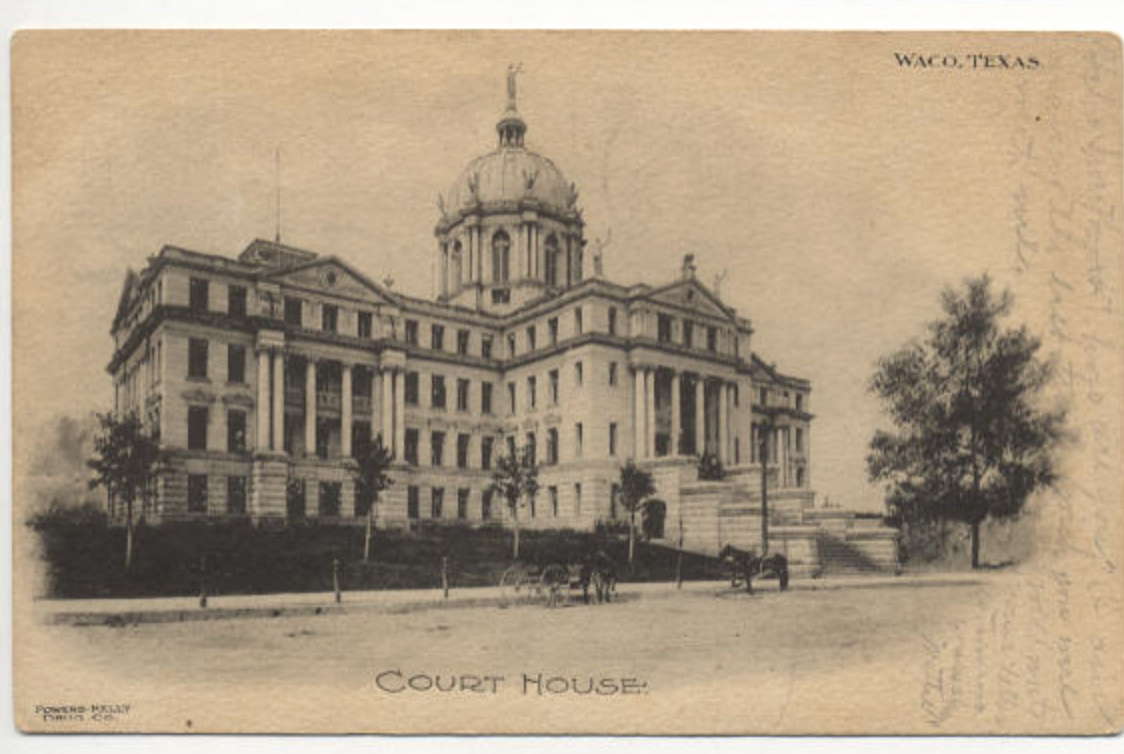 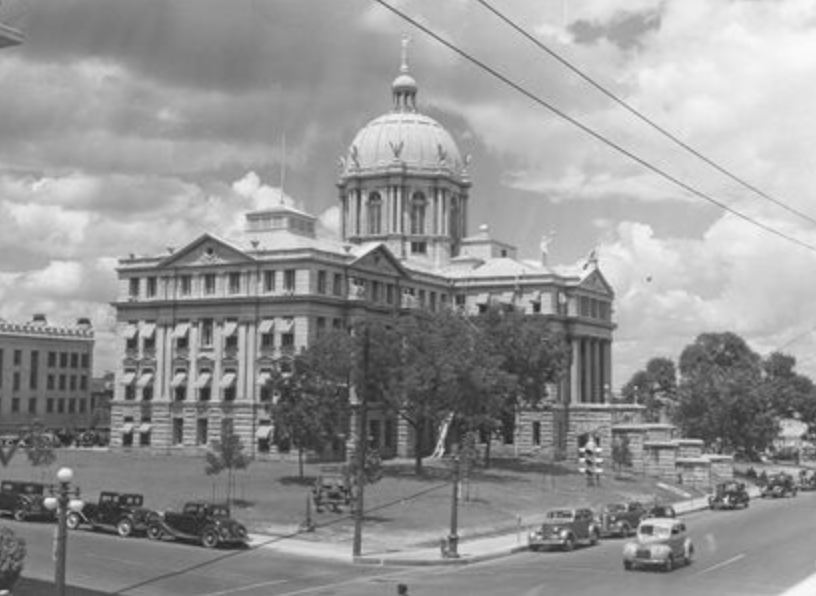 Look at what they were able to do.

Resting atop a small hill in downtown Waco, this courthouse is “dominating” in every sense of the word. The source of inspiration is cited as St. Peter’s Basilica in Rome. Tom Lovell of Denton served as the contractor, and the courthouse was completed on March 3, 1902. 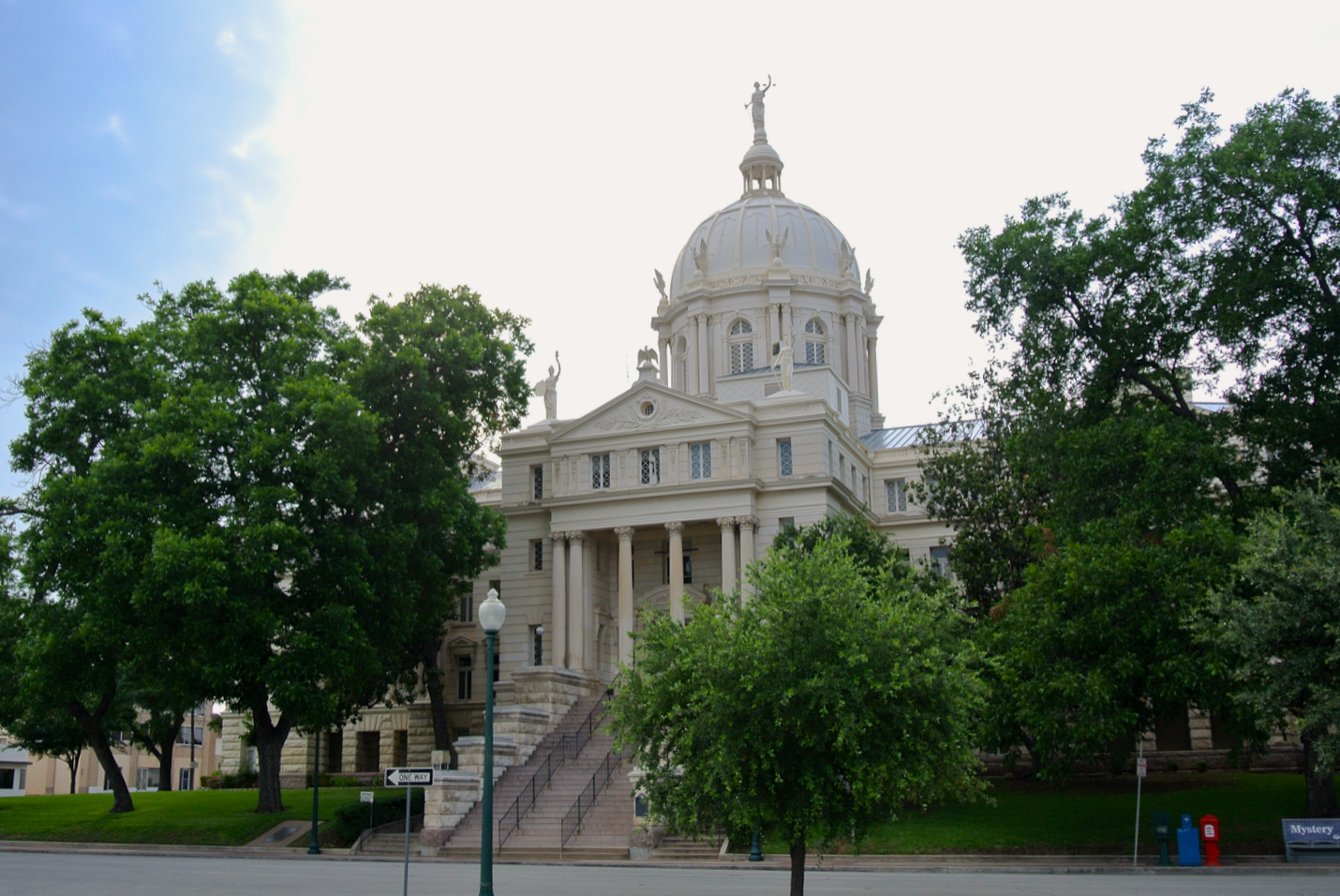 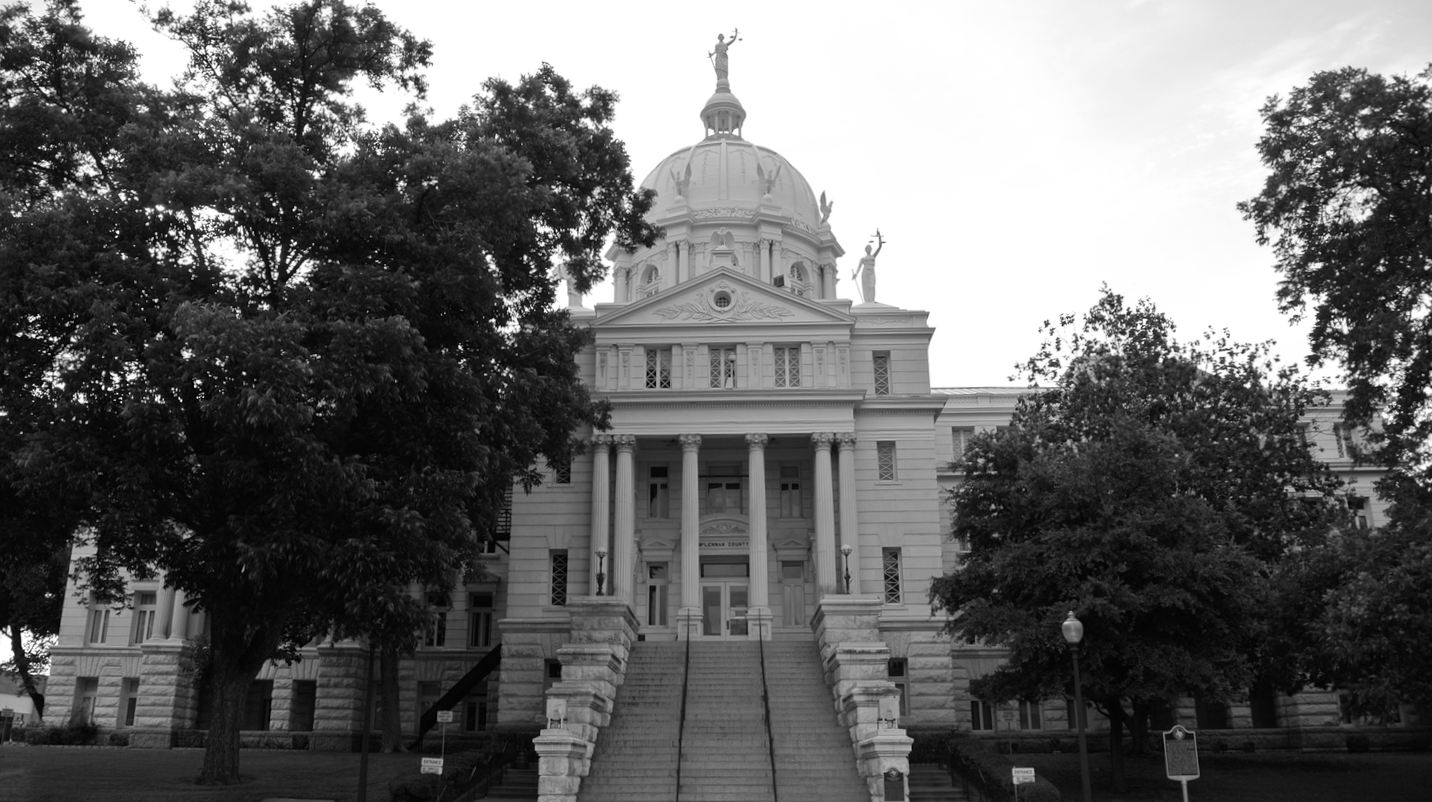 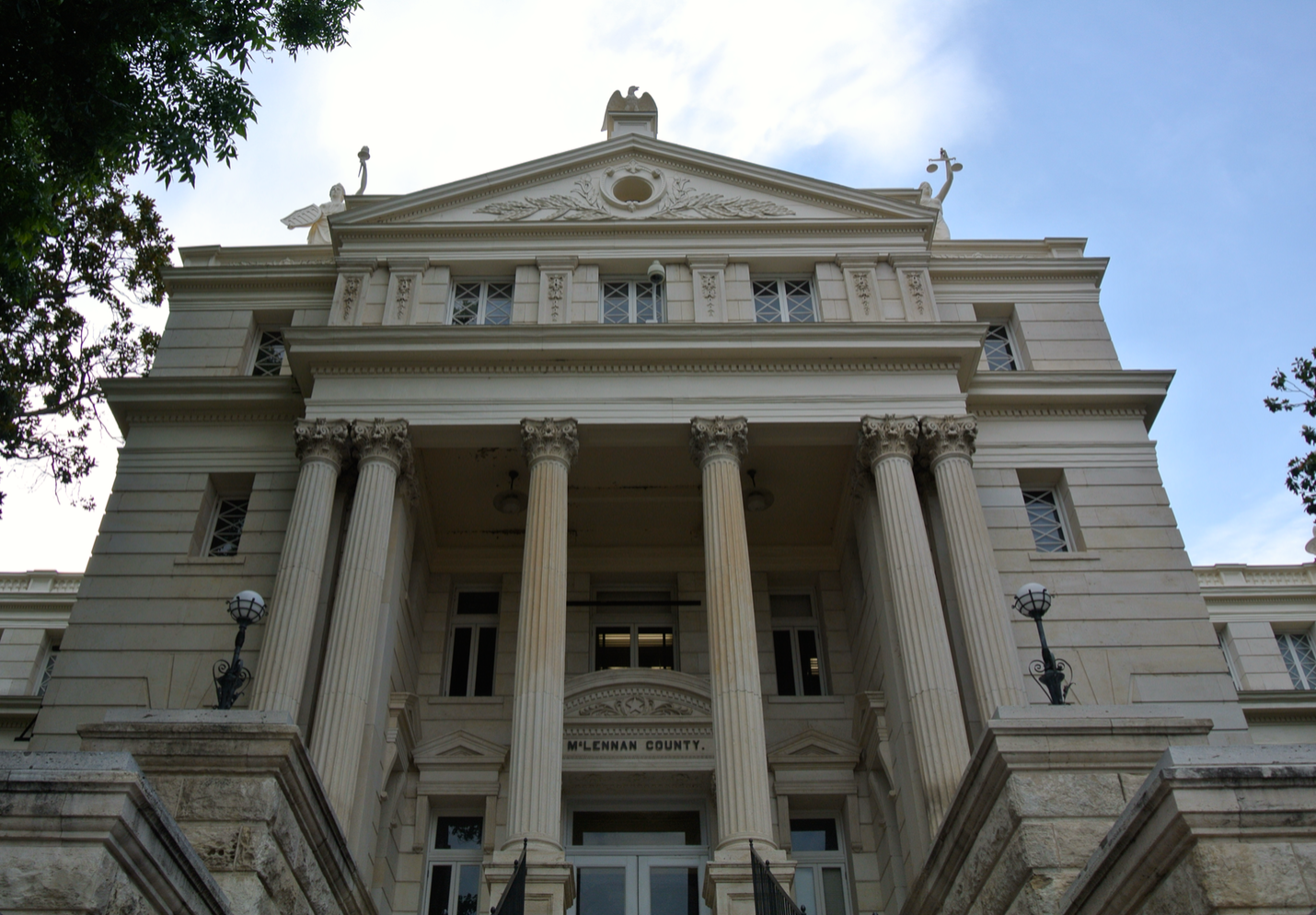 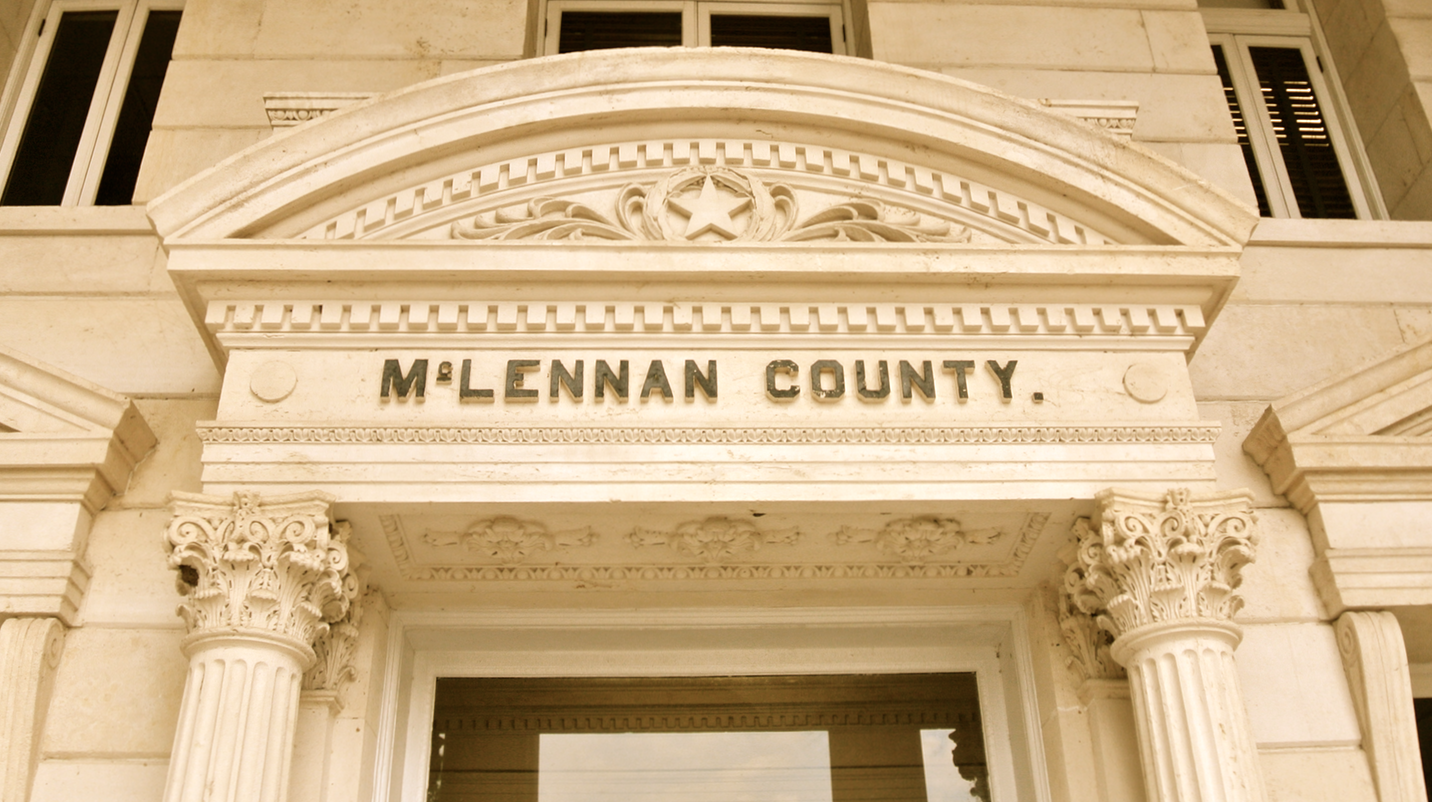 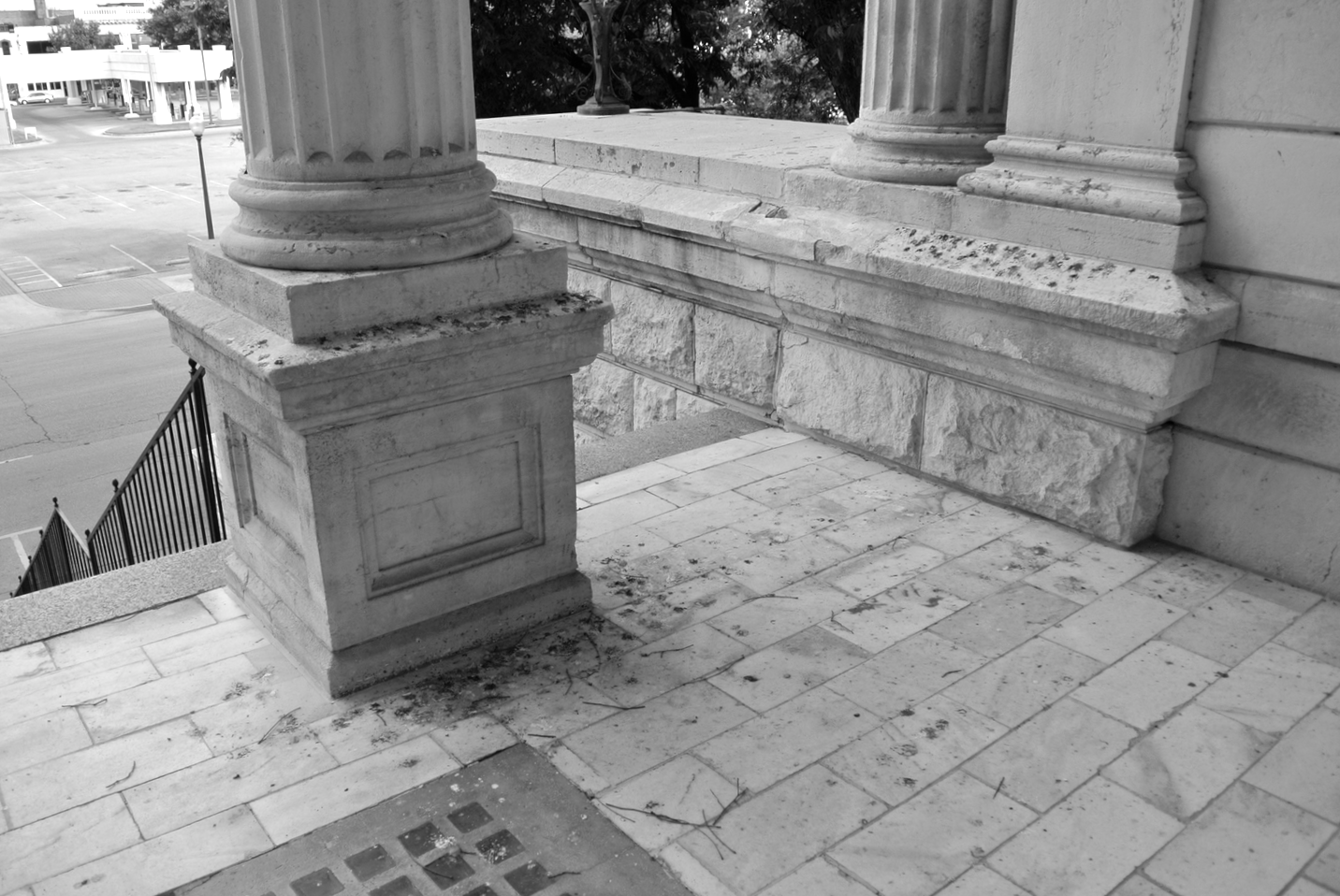 The “main doors” on the second floor are no longer in use, and you can tell it’s been a while since they were. 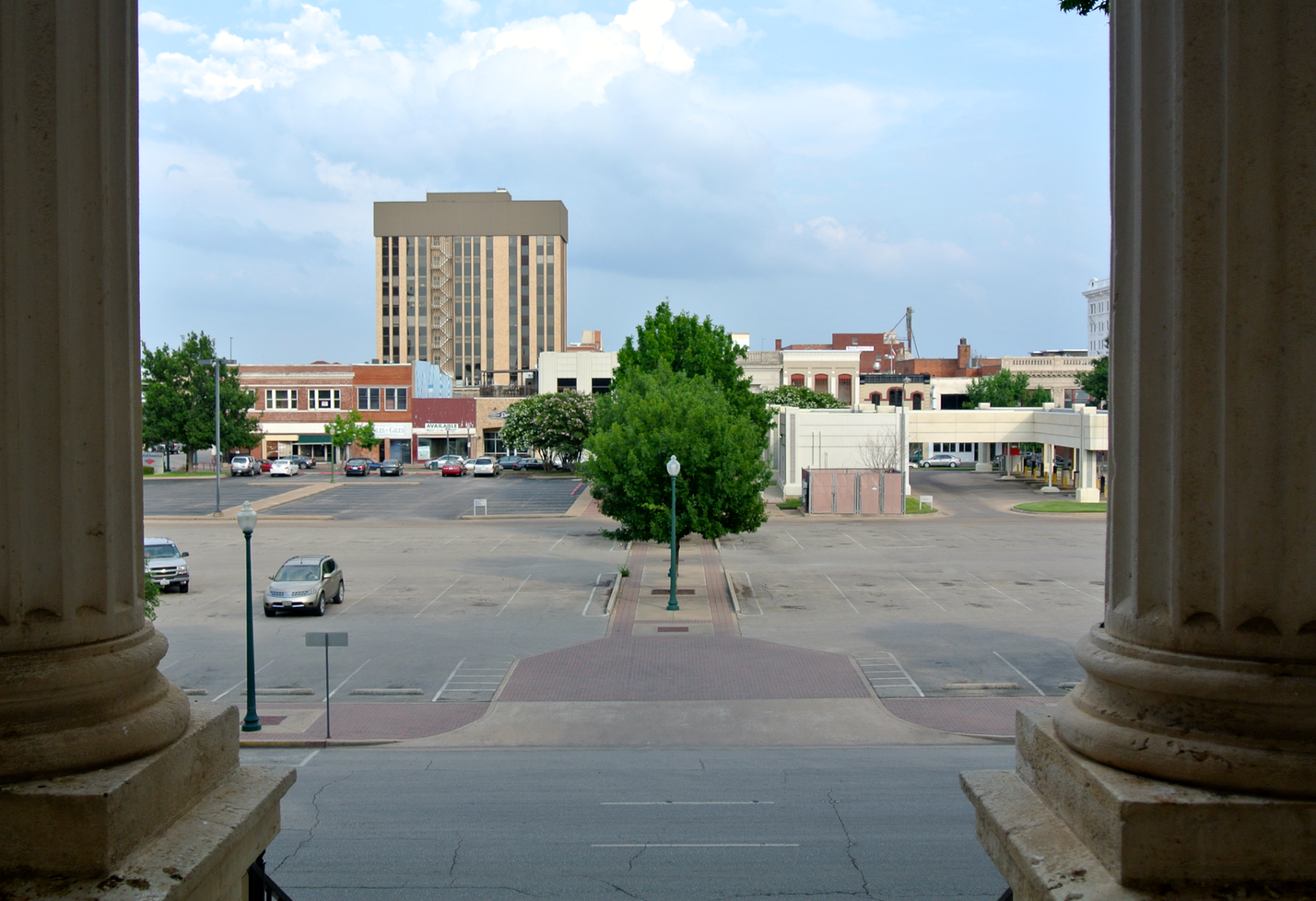 Washington Avenue as seen from the “main doors” 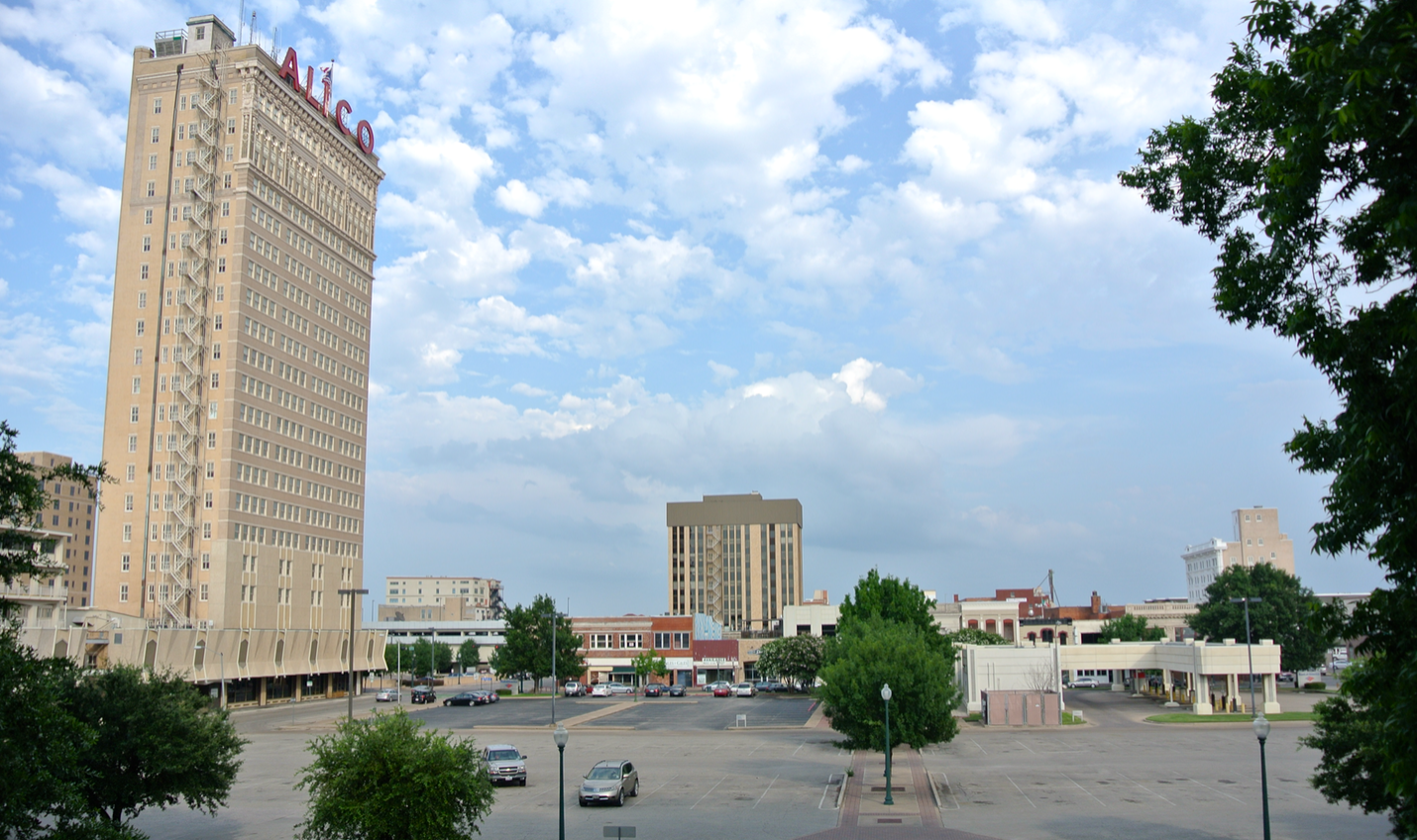 The Alico Building has been standing since 1911; (“Alico” stands for Amicable Life Insurance Company). It’s got a pretty fascinating history, which you can read about here. 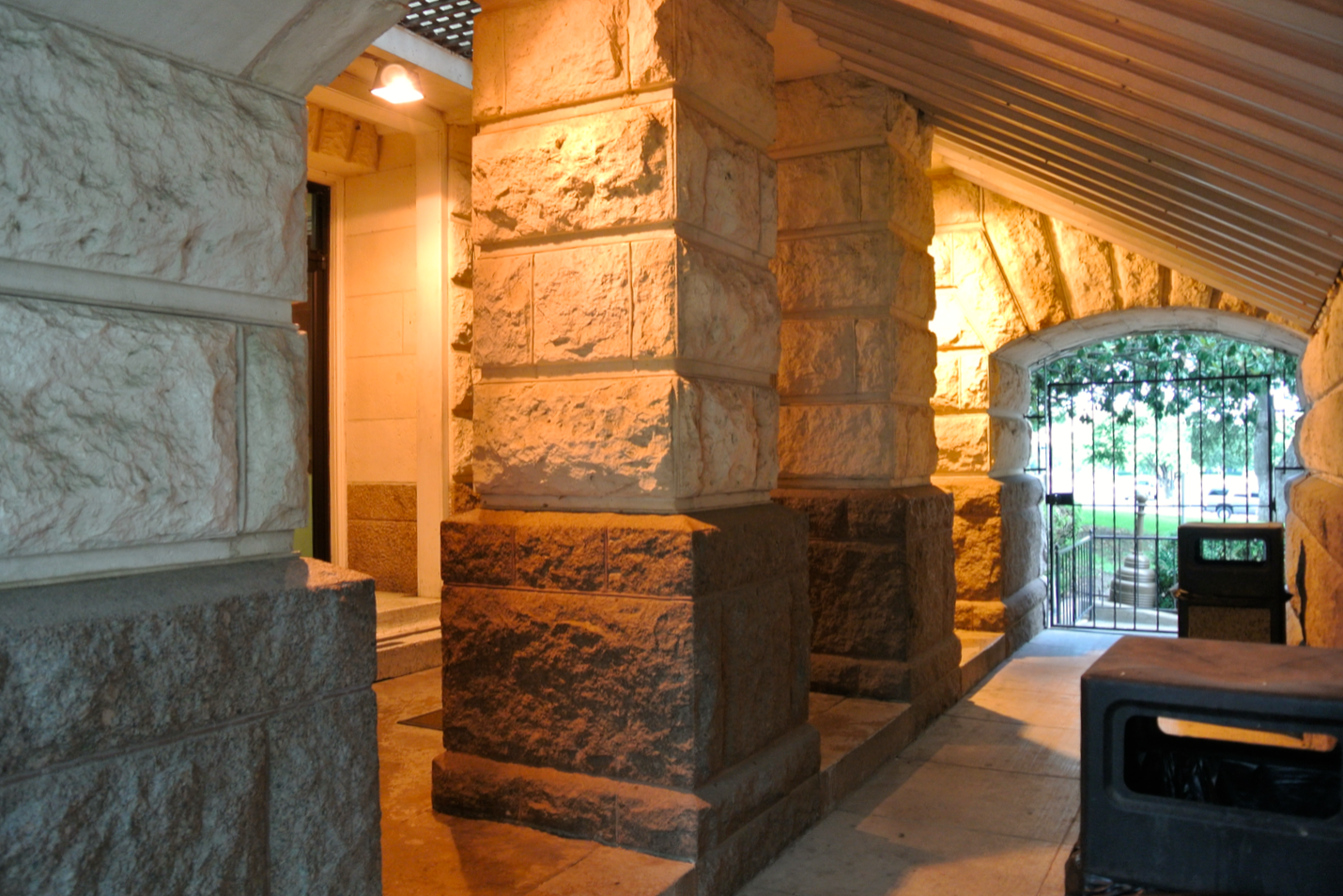 The current entrance lies underneath the grand frontal staircase. 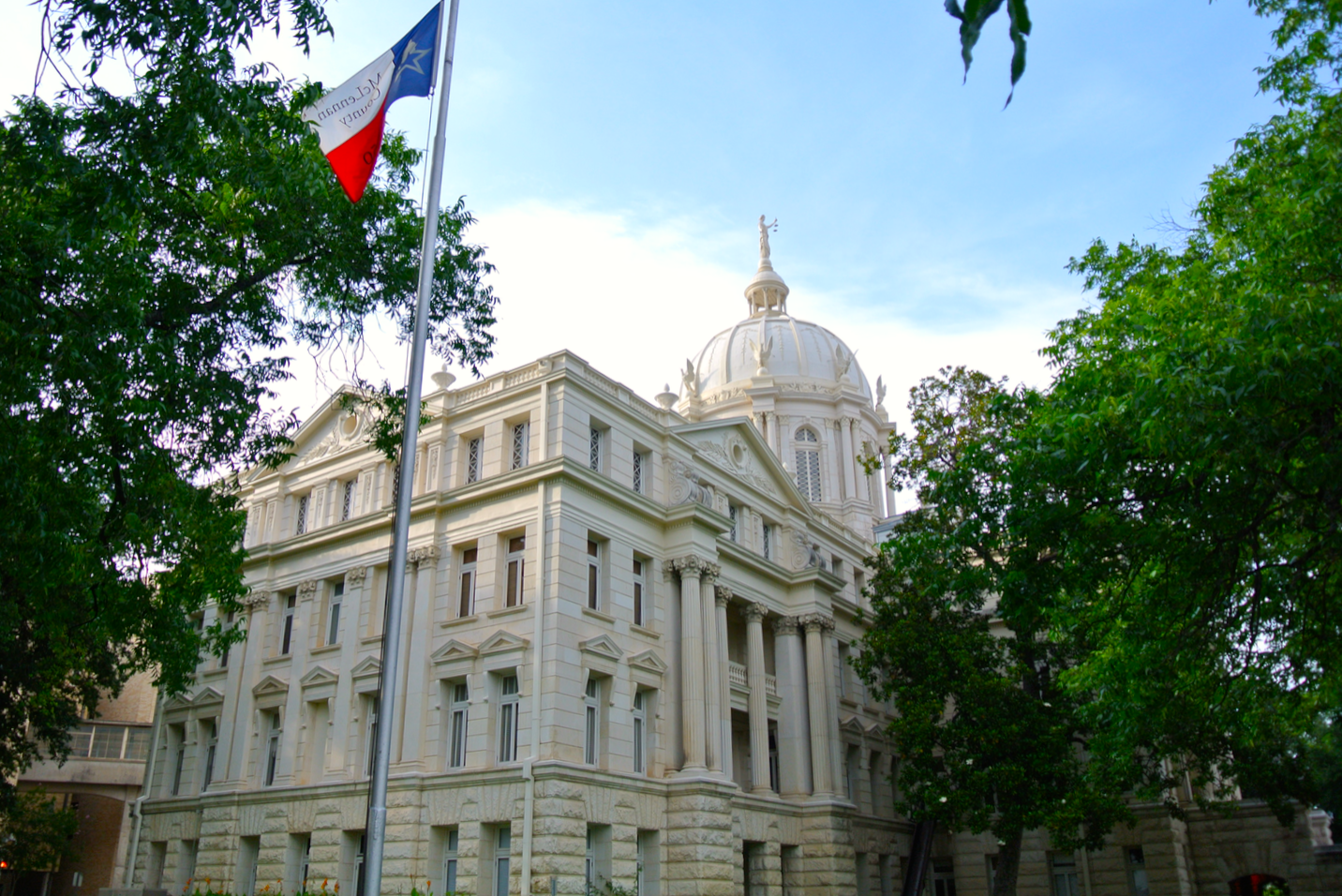 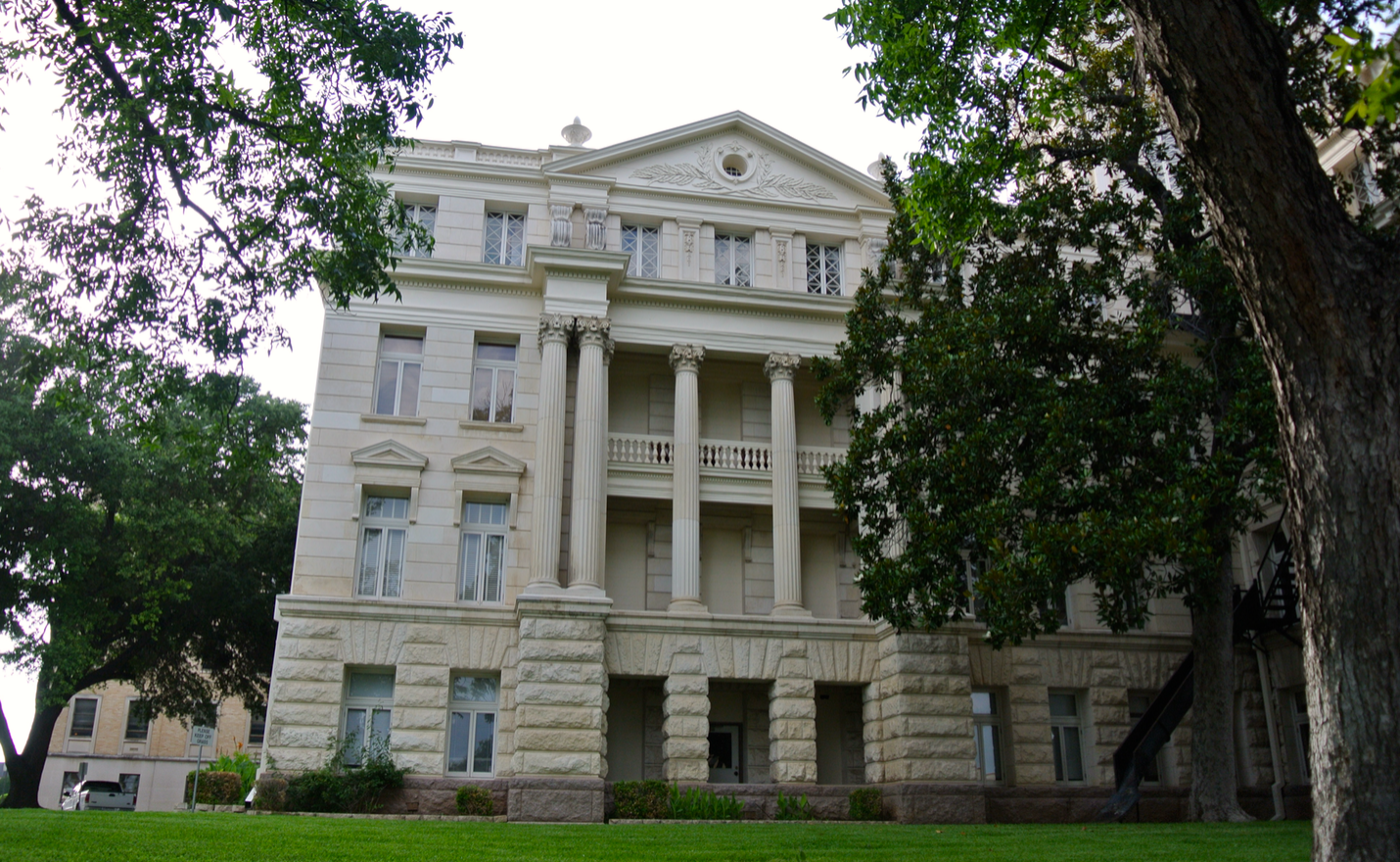 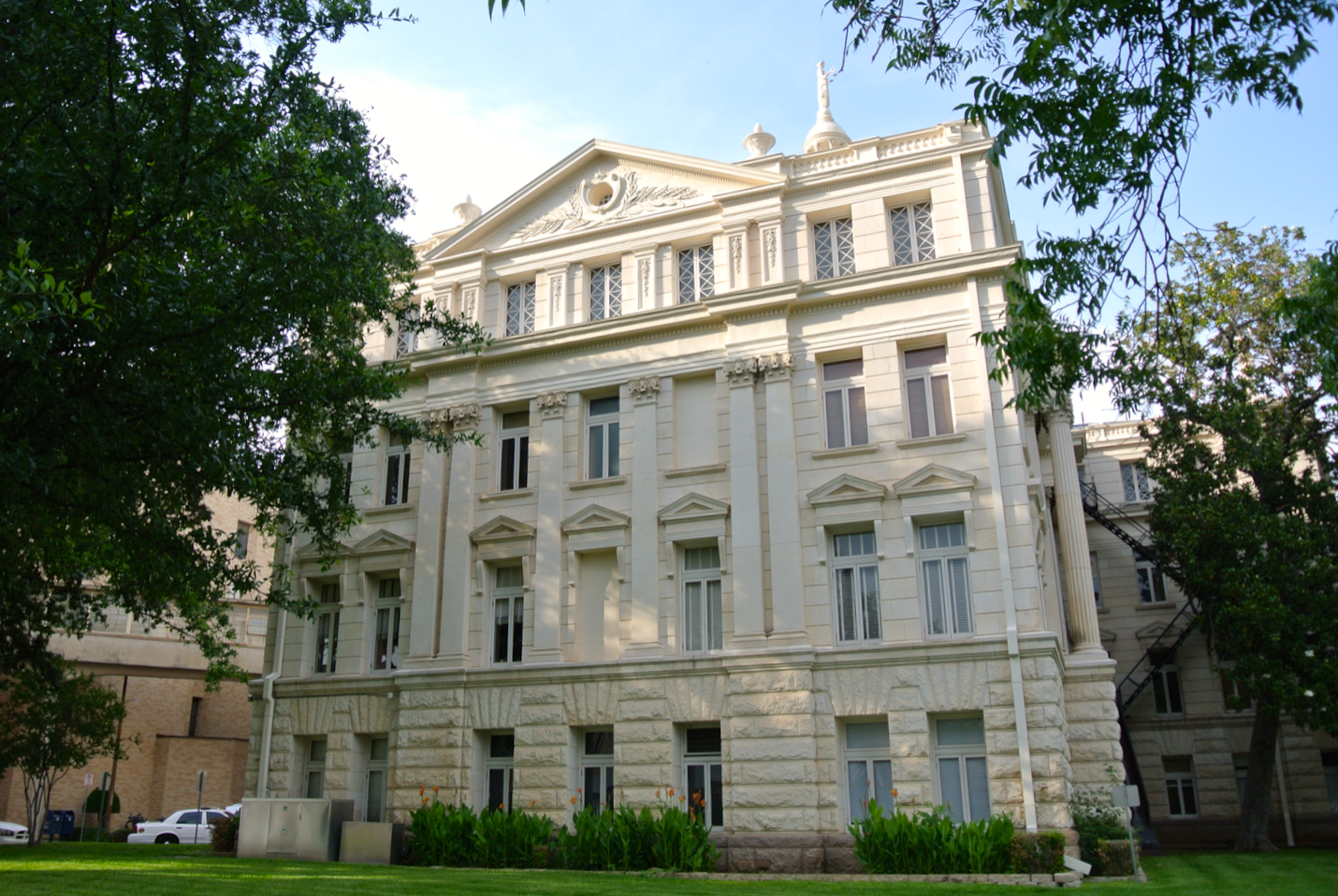 The southwest façade, on 6th Street 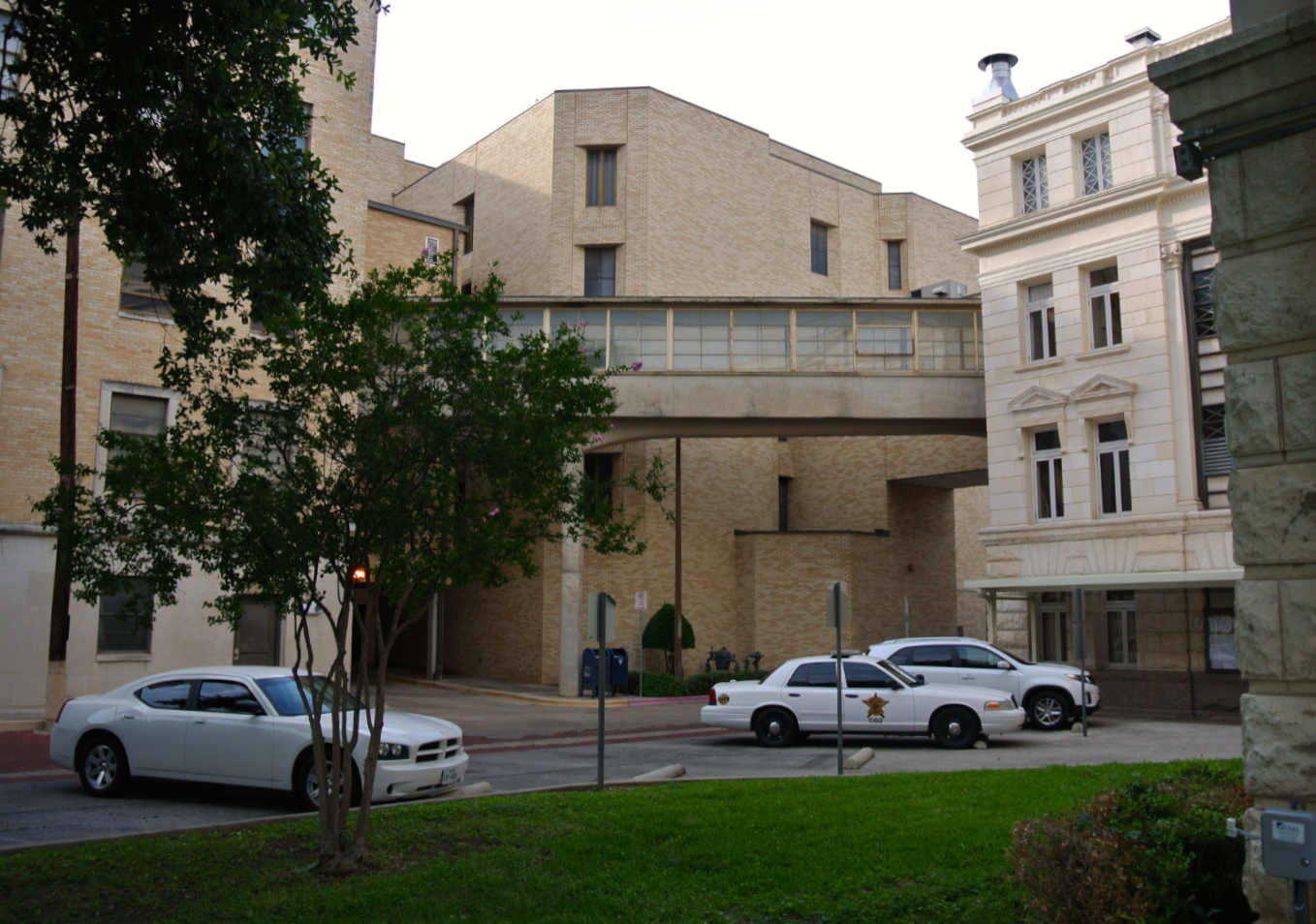 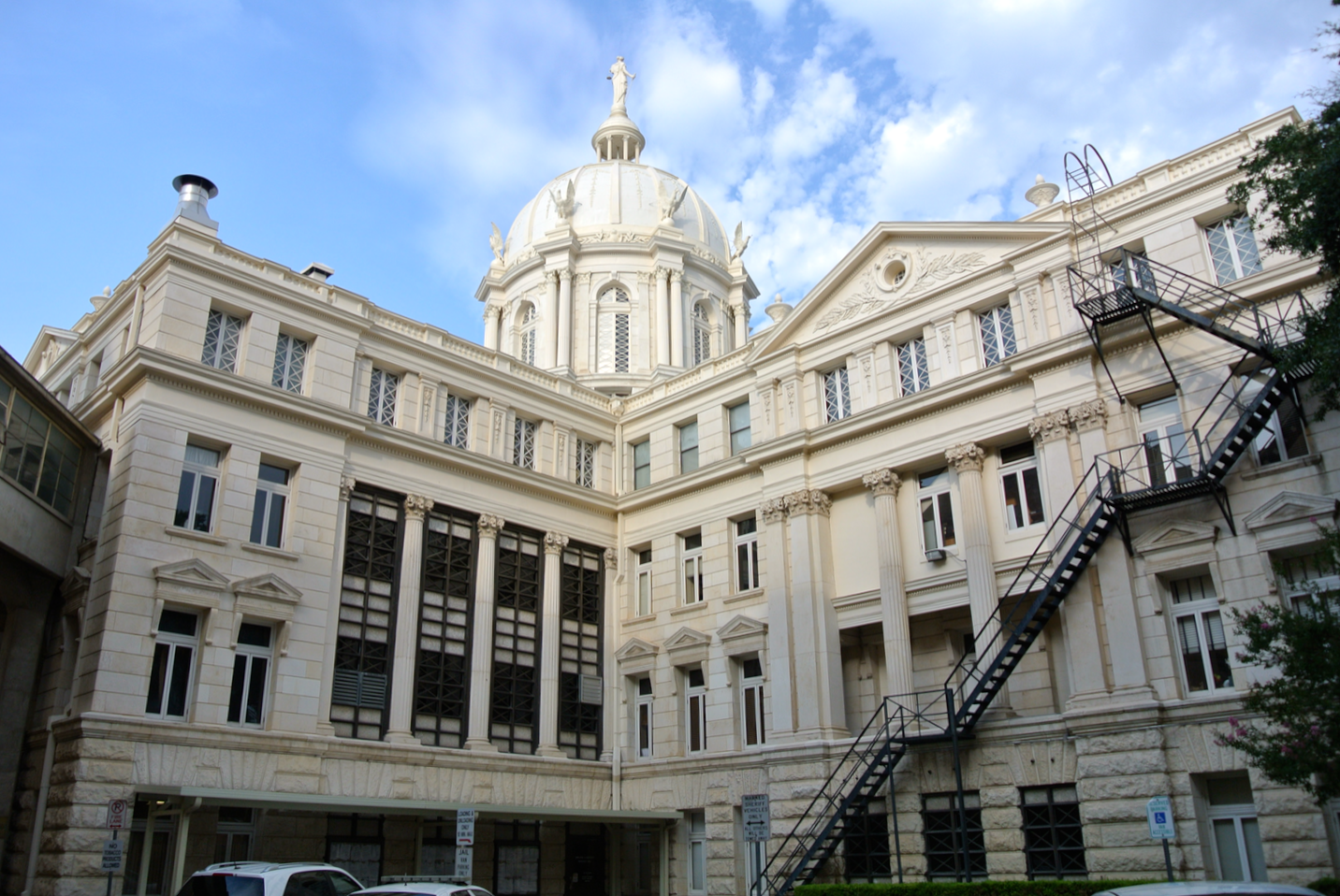 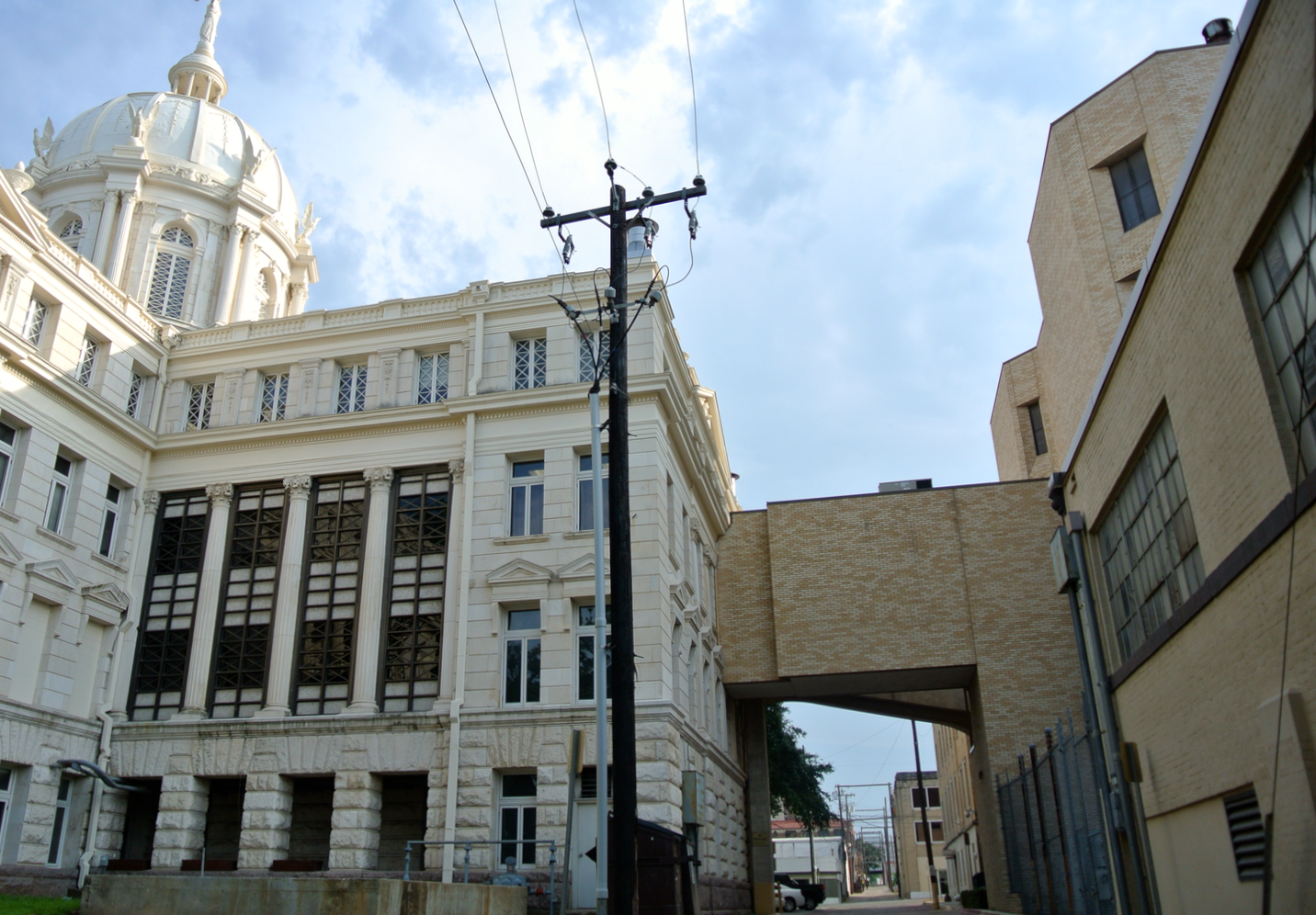 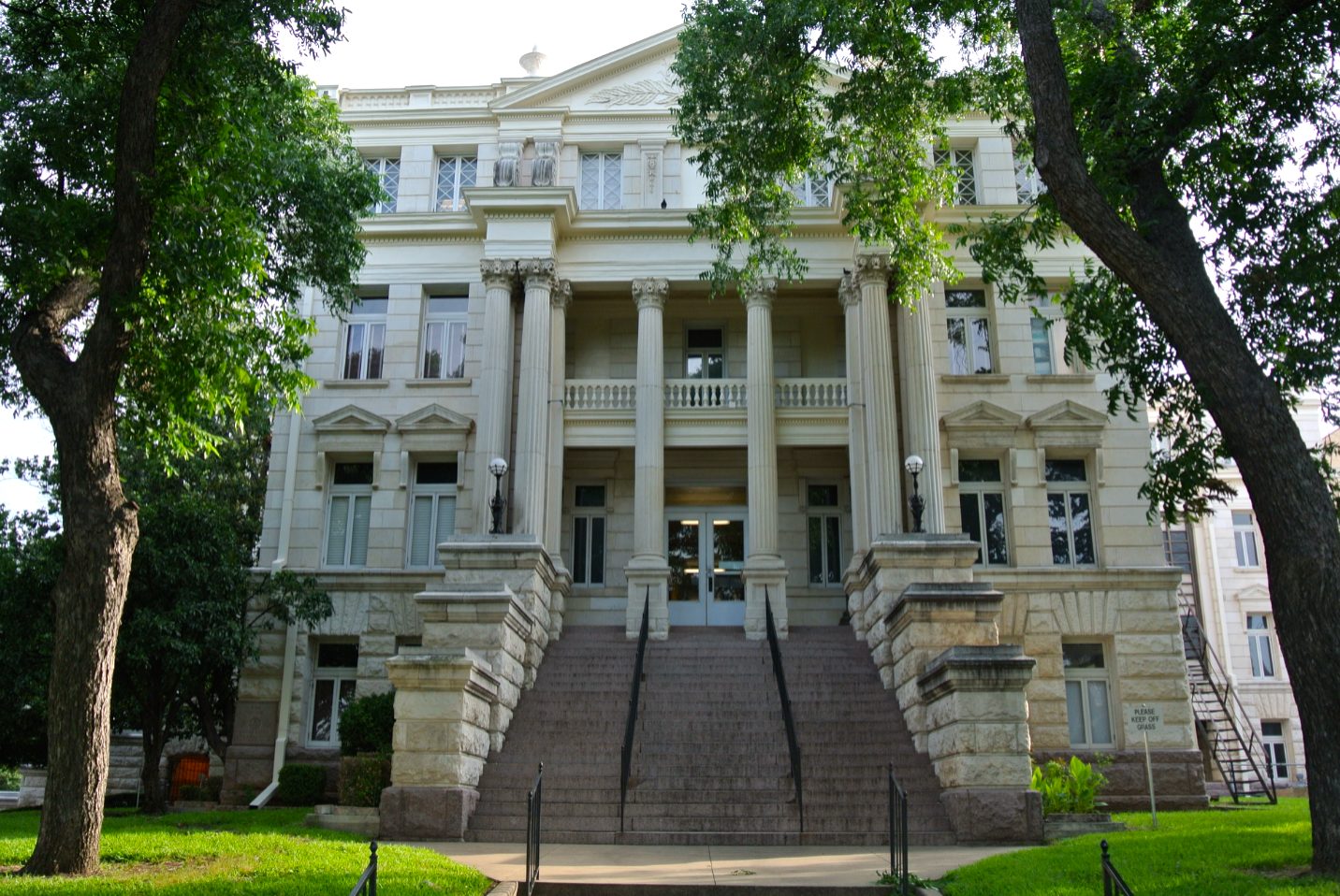 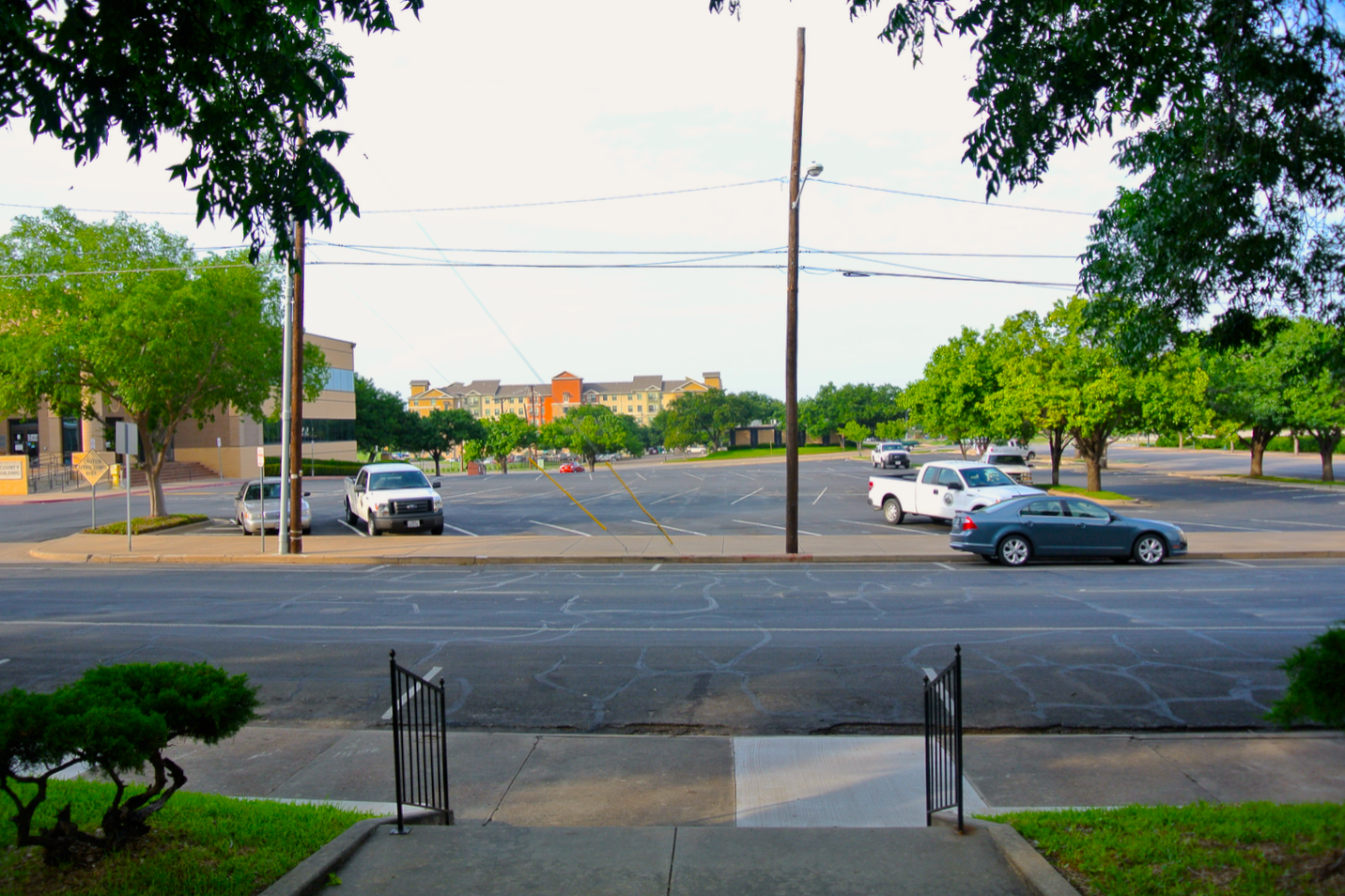 …and the view of 5th Street from its steps 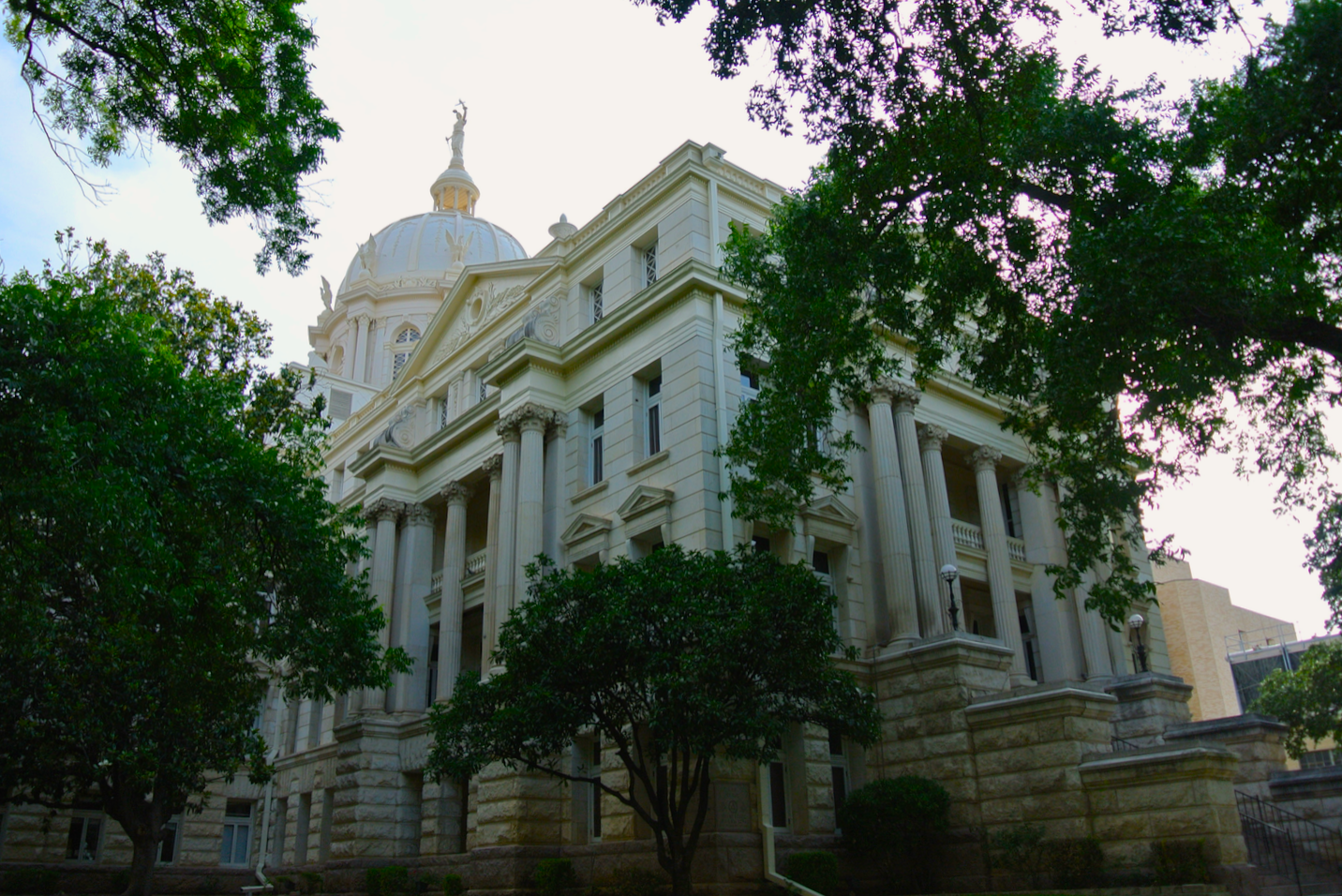 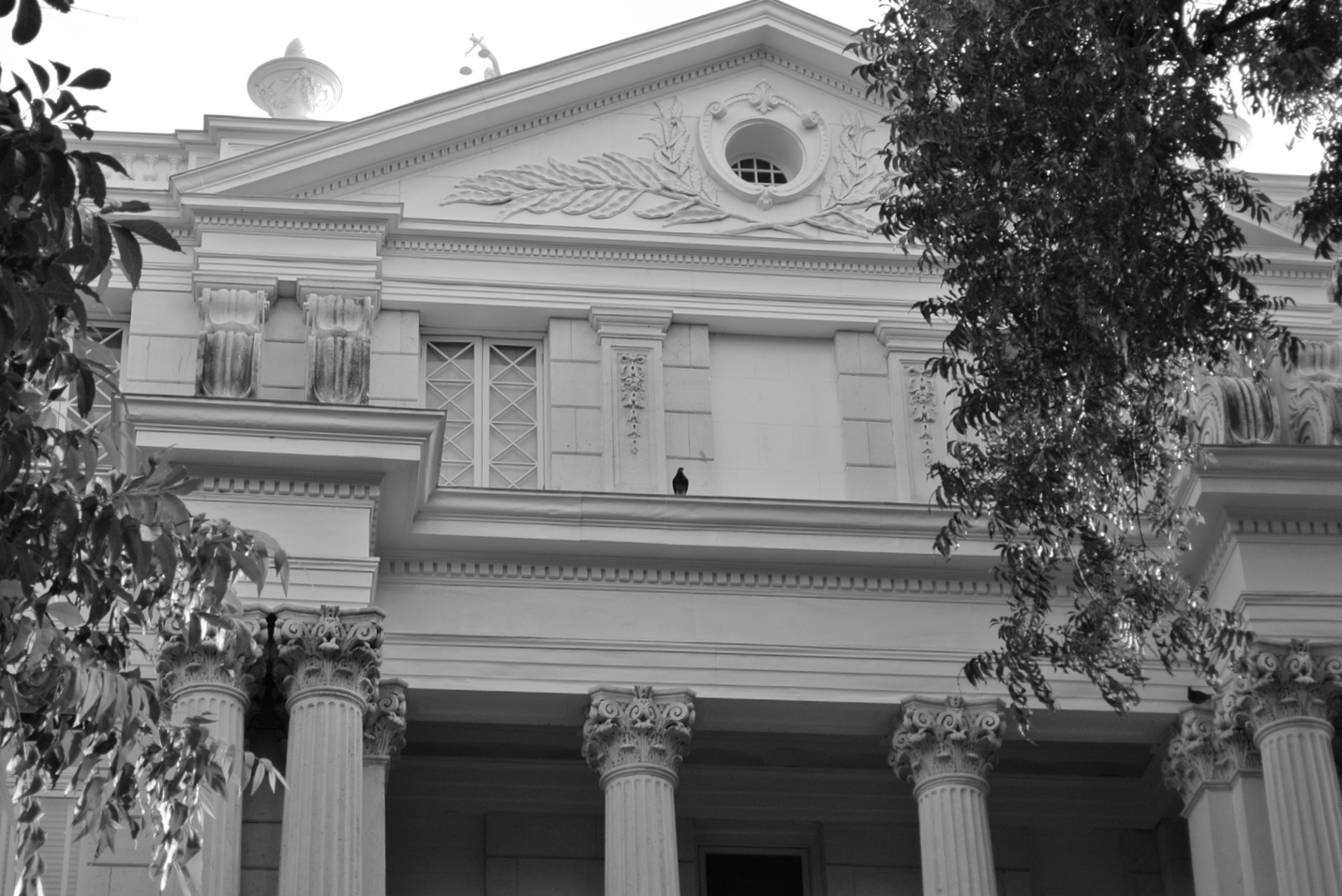 The cornerstone is on the east corner. 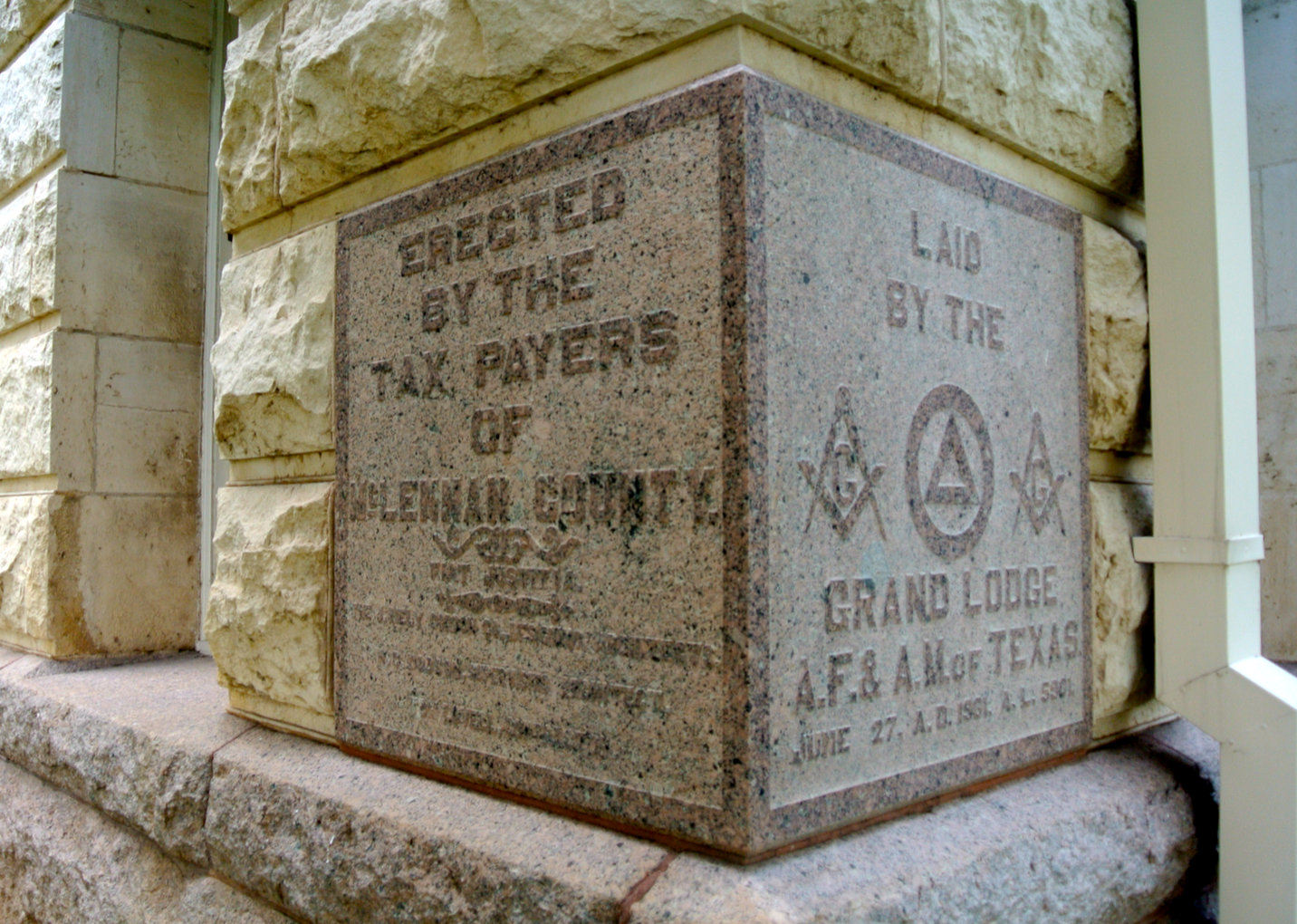 This stone in particular honors the tax payers of McLennan County, who funded this courthouse. 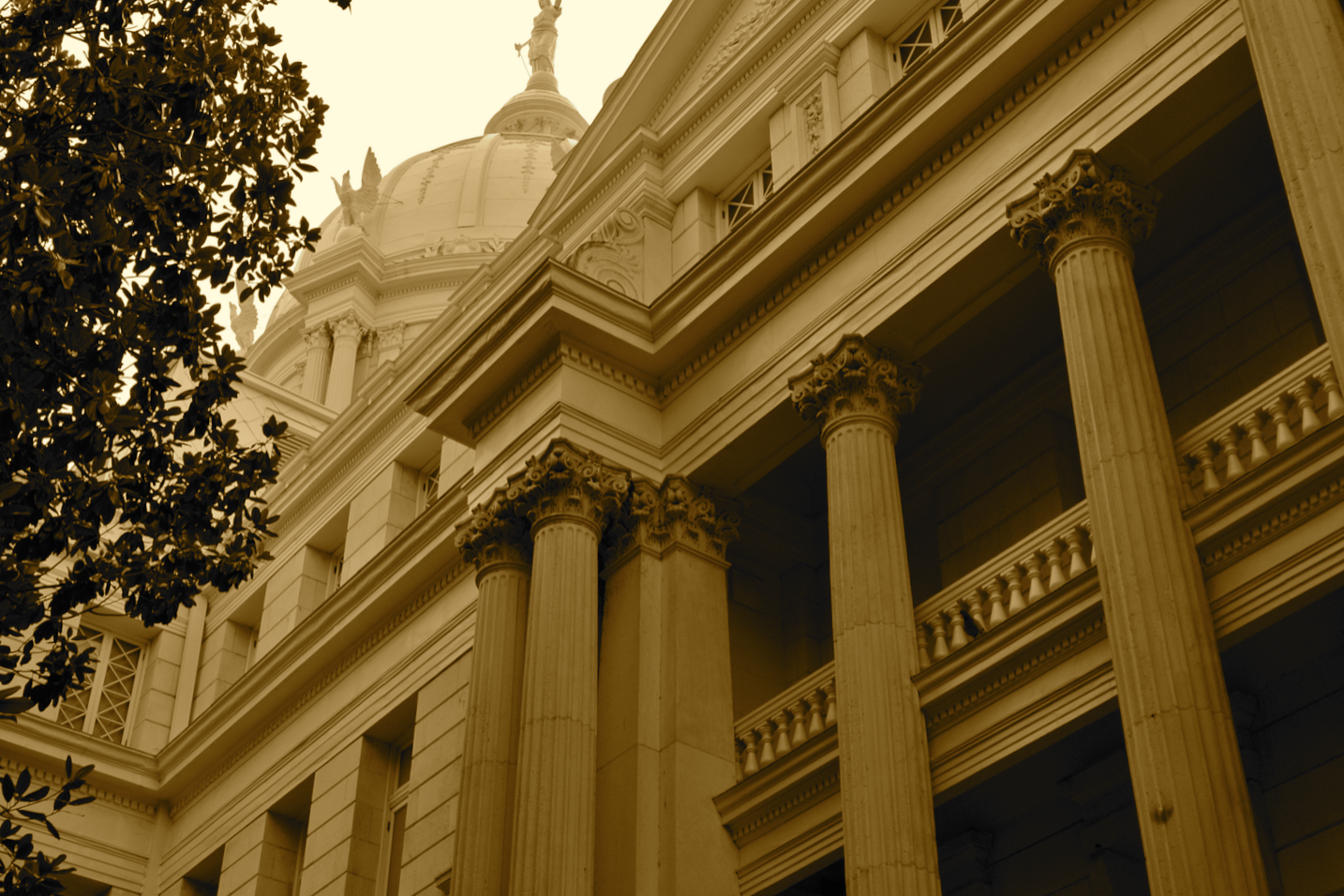 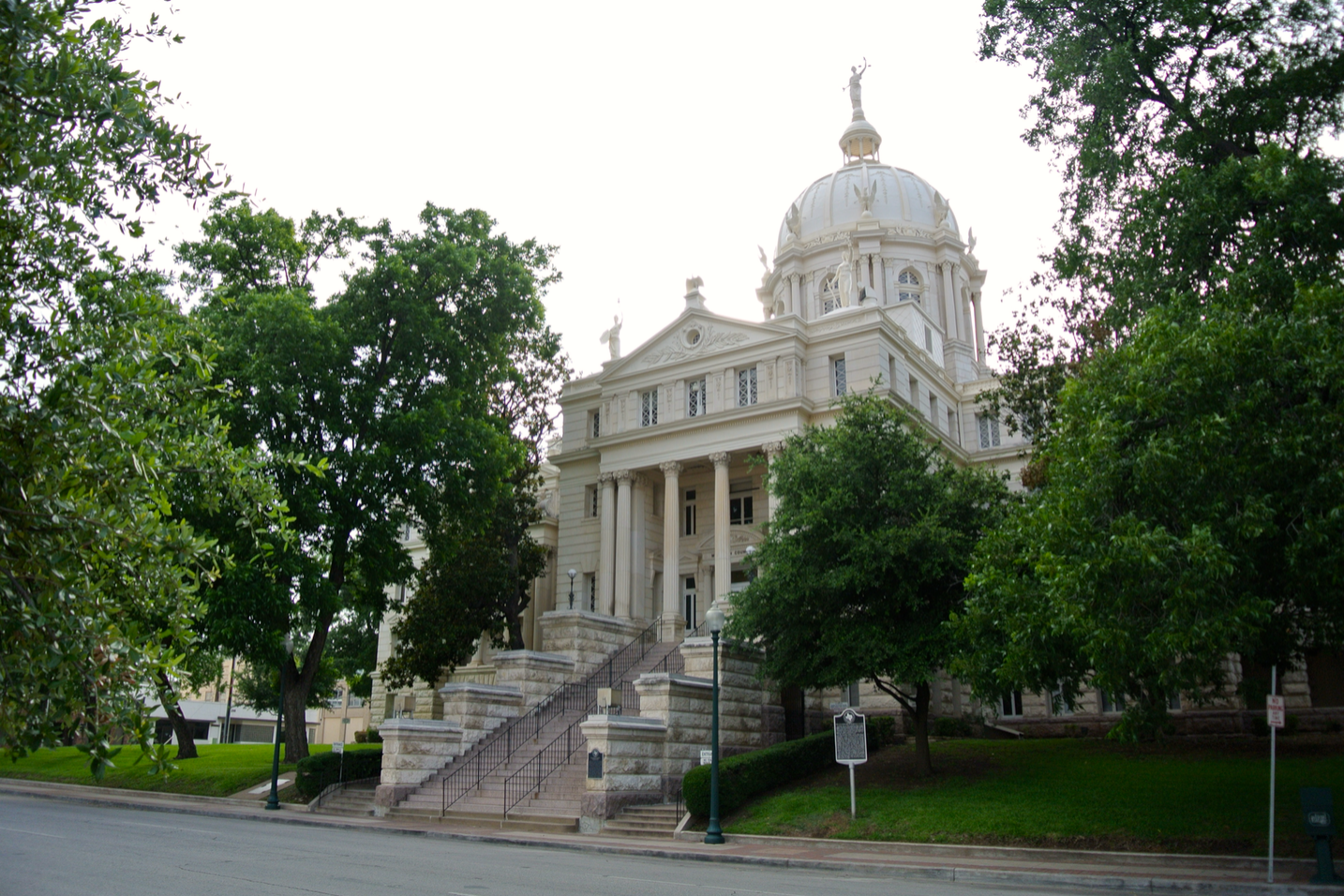 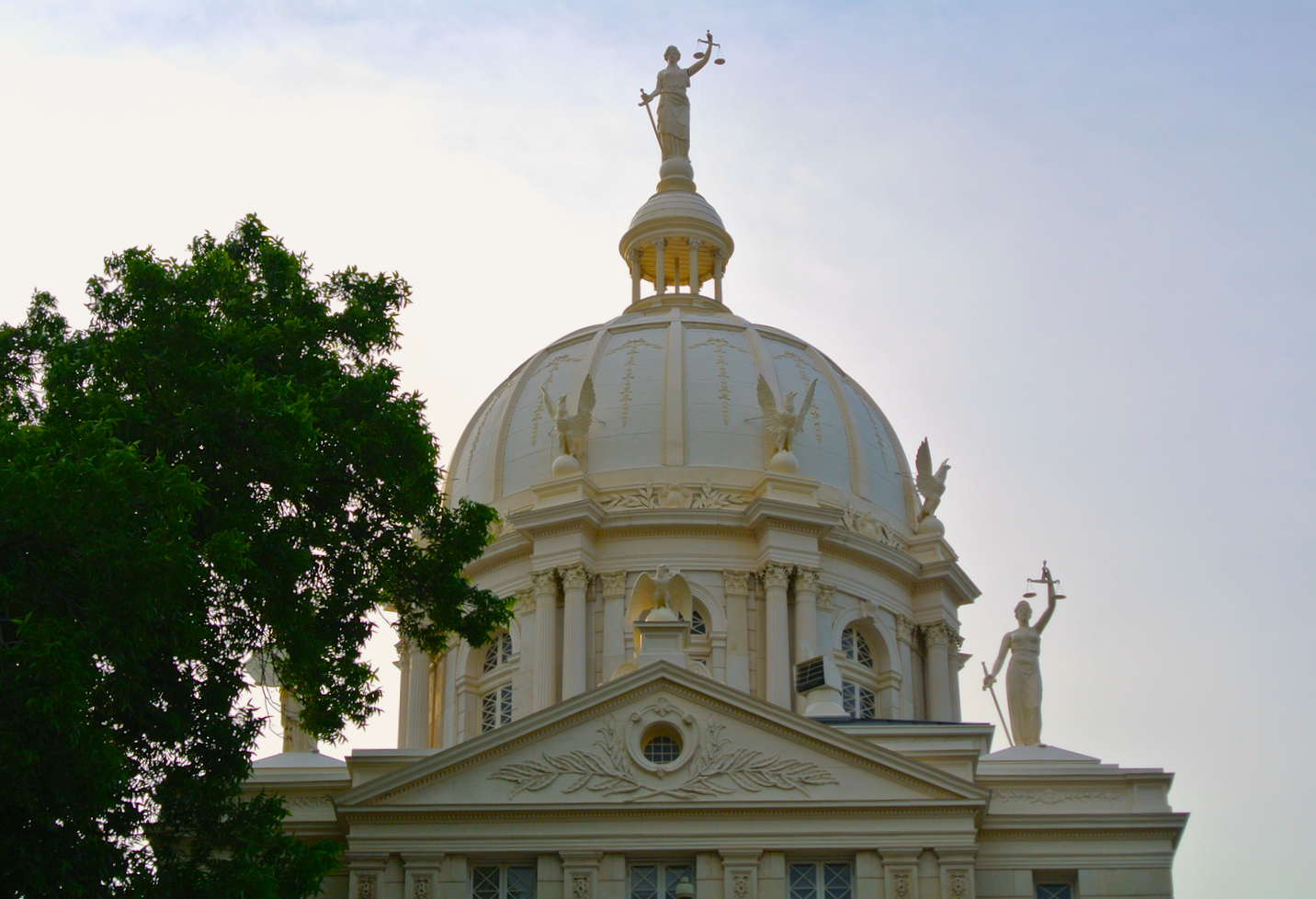