“Most of Montague County’s 937 square miles lies in the region known as the western Cross Timbers, in which the dominantly light colored, sandy, and loamy soils support a post oak savannah. A small portion of the northwestern part of the county lies in the north central prairie, where the soils are dominantly dark colored and loamy and support grass.”

“In 1747 French trappers negotiated a Wichita-Comanche alliance that, within a decade, produced two large settlements on the banks of the Red River, the northern boundary of present Montague County. The principal village was north of the river and was inhabited by the Taovayas, a branch of the Wichita Indians. A smaller settlement south of the river was inhabited by Wichitas. Following an Indian attack on the San Saba Mission, the Spanish attempted a reprisal raid on the Red River settlements in 1759 only to discover that the villages were protected by a moat and stockade.”

“Approximately twenty years later Athanase de Mézières conducted a peace with the Indians and renamed the villages San Bernardo and San Teodoro. By 1812, however, losses suffered from smallpox had forced the Indians to abandon their settlements. Decades later Anglo-Americans discovered traces of the villages and named the location Spanish Fort. Although no permanent settlement remained, Comanche and Wichita Indians continued to inhabit the area, and their presence slowed Anglo-American development of the region.” 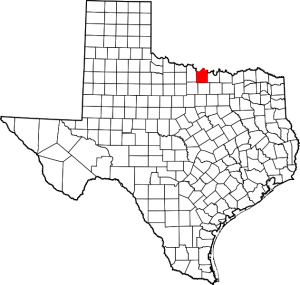 “Organization of the area occurred twenty years after the Texas Revolution of 1836. The state legislature established the county on Christmas Eve in 1857. The following year, on August 2, 1858, the county was formally organized with its present boundaries carved from Cooke County. The new county was named for Daniel Montague, surveyor of the Fannin Land District and veteran of the Mexican War. Only three villages existed in the county at the time, and none of them was near the geographic center of the county. So an uninhabited area at the appropriate location was identified as the county seat and also named in honor of Daniel Montague. At the time the area of Montague County had less than 1,000 residents.”

“A substantial number arrived from north of the Mason-Dixon line, mostly farmers from Illinois, Indiana, and Ohio. As a result of this immigration pattern, the county did not reproduce the slaveholding plantation society that characterized the state. This in part explains the position Montague County took when voters rejected secession 86 to 50 in 1861. The 849 residents, including thirty-four slaves, may have been more concerned with preserving their lives than the union. If Texas joined the Confederacy, federal troops would withdraw from the Red River area.”

“Government soldiers provided the only protection from Indian raids, and their removal would leave the underpopulated county exposed to attacks from Indians who far outnumbered them. The next fifteen years confirmed their fears, as Indian raids forced farmers to abandon their homes. In 1863, for example, an Indian attack wiped out the community of Illinois Bend. The end of the Civil War did not resolve the problem. Bands of Comanche and Wichita Indians continued to harass the county until the mid-1870s. As a result of these raids, in 1870 only 890 residents had settled in the county. During the first few years of the 1870s, however, an organized effort successfully drove the Indians from the county, allowing the governor in 1878 to pronounce that Montague County was no longer a frontier county.”

“As the number of Indian raids decreased, the number of settlers increased. By the early 1880s the population was 11,000. The abundance of grasslands had attracted cattlemen as early as the late 1860s. In the fall of 1867 Montague County was the last Texas county crossed by the Chisholm Trail before it entered Indian Territory. For the next twenty-five years county residents concentrated their efforts on cattle raising, as a result farms produced forage for livestock and food rather than cultivating a cash crop.”

“The emergence of large cattle ranches and the continued increase in population attracted railroads to the county in the early 1880s. In 1882 the Fort Worth and Denver Railway reached southwestern Montague County. The railroad enabled the growth of Bowie, Sunset, and Fruitland. Five years later the Gainesville, Henrietta and Western Railway built through north central Montague County and founded Saint Jo, Bonita, and Belcherville. In 1892 a third rail system stretched across the county, the Rock Island Railroad. Ironically, the one community that was not touched by the tracks of the three rail systems was the county seat. As a result, Montague was soon overshadowed by Nocona, home of the Justin Cowboy Boot Company, to the north; Saint Jo, an important farm market center, to the east; and by Bowie to the south.”

“Bowie’s growth and development as an agribusiness center prompted a call by the town’s residents for the county seat to be changed to their community. An election was held in 1884 and, although Bowie received more votes than Montague, it did not collect the required two-thirds majority needed to move the county seat. Since the mid 1880s, however, Bowie has remained both the largest and most important town in the county, while Montague’s population has never exceeded 500.”

Unlike the “mon-tuh-gyoo” pronunciation you might hear in Shakespeare’s Romeo and Juliet, I understand that locals pronounce “Montague” as “mon-teg.”

I was the guest of Montague County and Montague on January 8, 2011 and returned to rephotograph the courthouse on May 17, 2014. 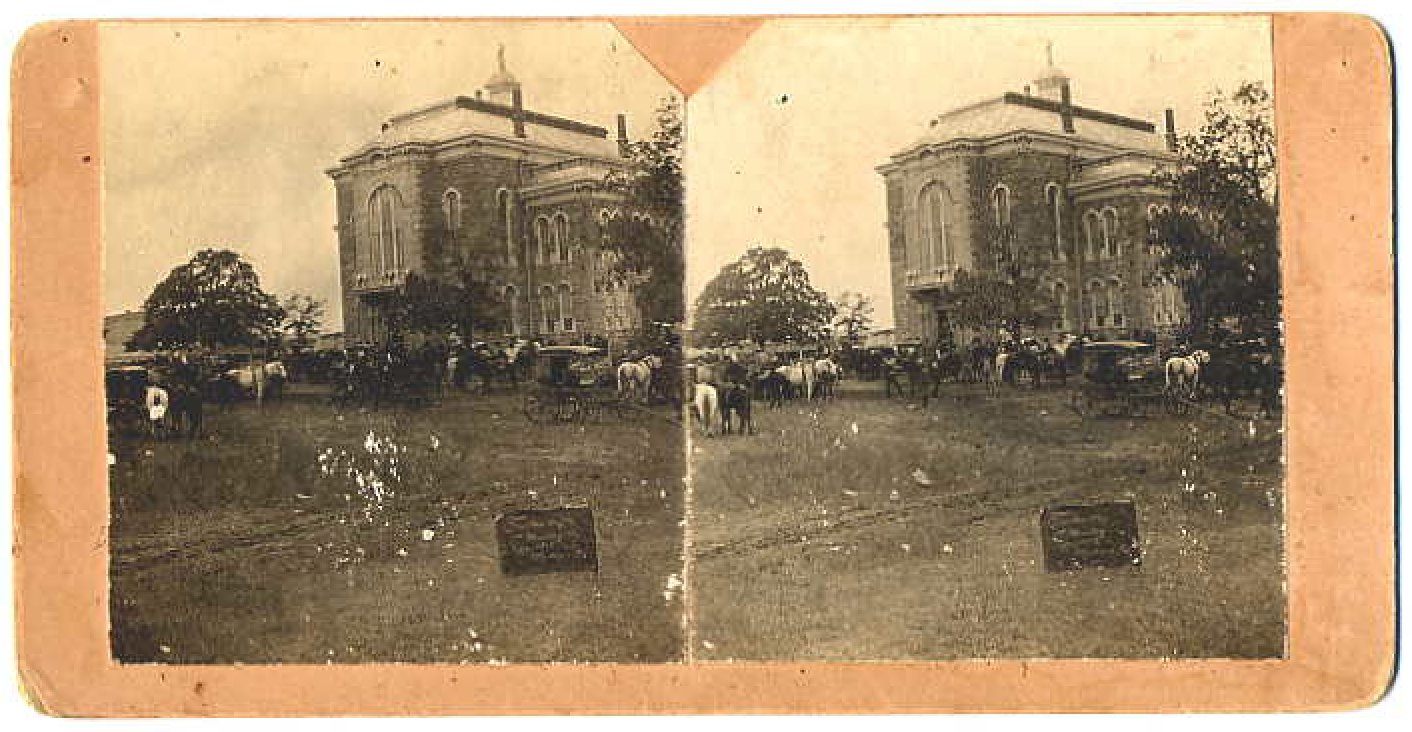 The dome having been destroyed in 1905 by a tornado, the Second Empire courthouse suffered more storm damage in 1911, prompting the county to demolish it. 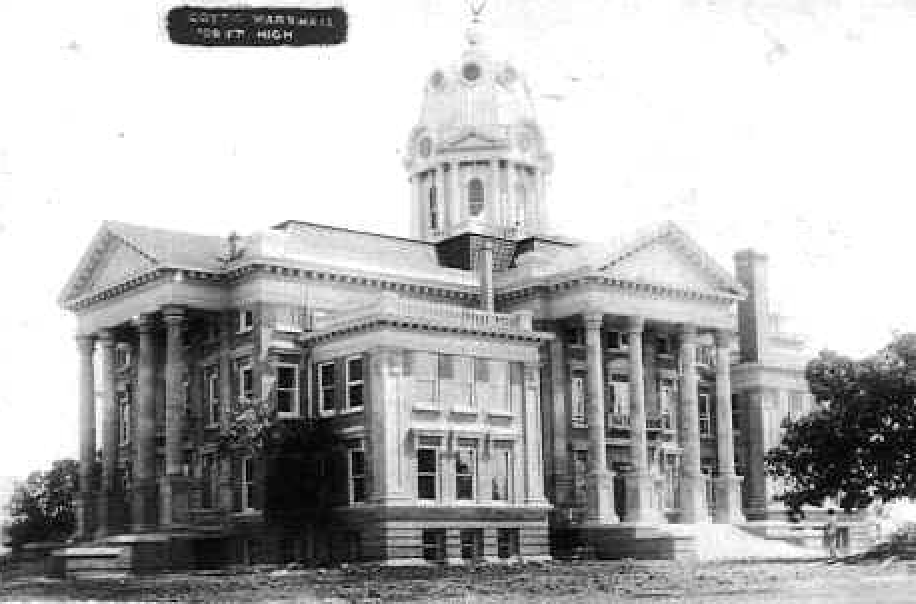 George Burnett designed this building with a dome, however after more storm damage, it was removed in 1939. The 1939 remodel also called for the replacement of all interior doors, and the addition of aluminum framing for the entry doors. 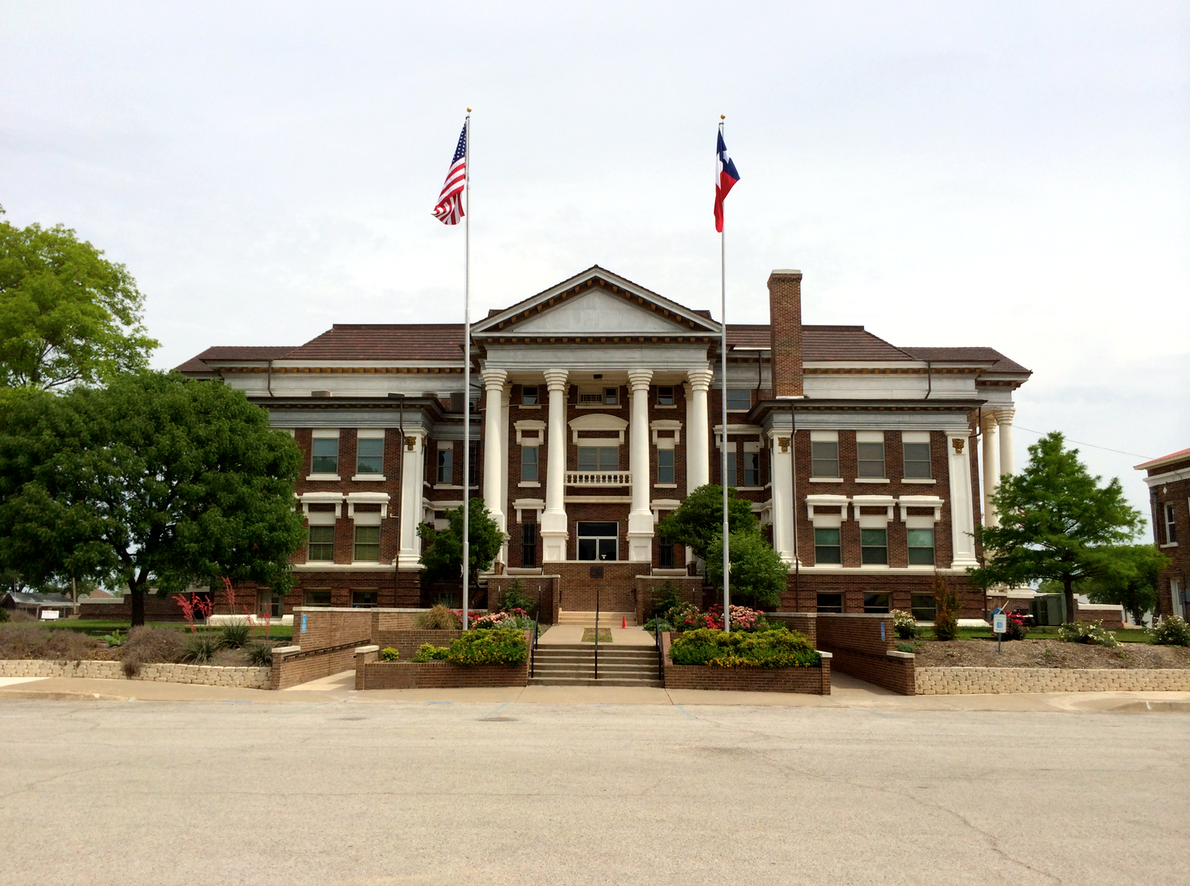 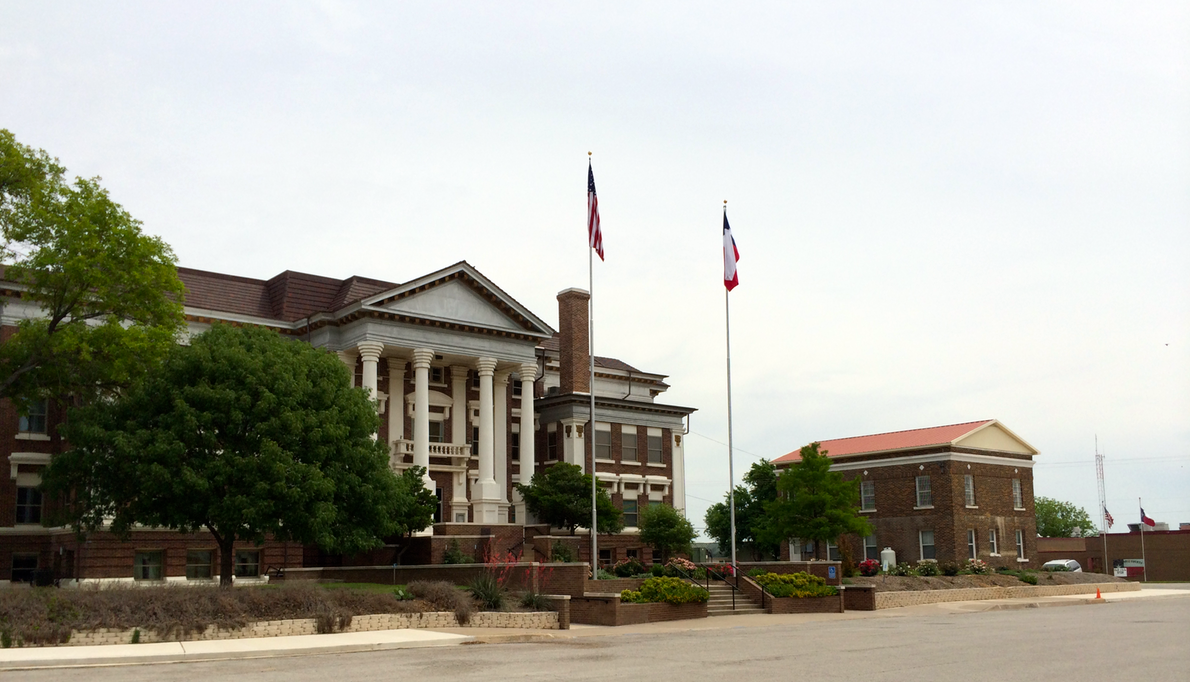 Located directly next to the courthouse is the historic jail, constructed in 1927. 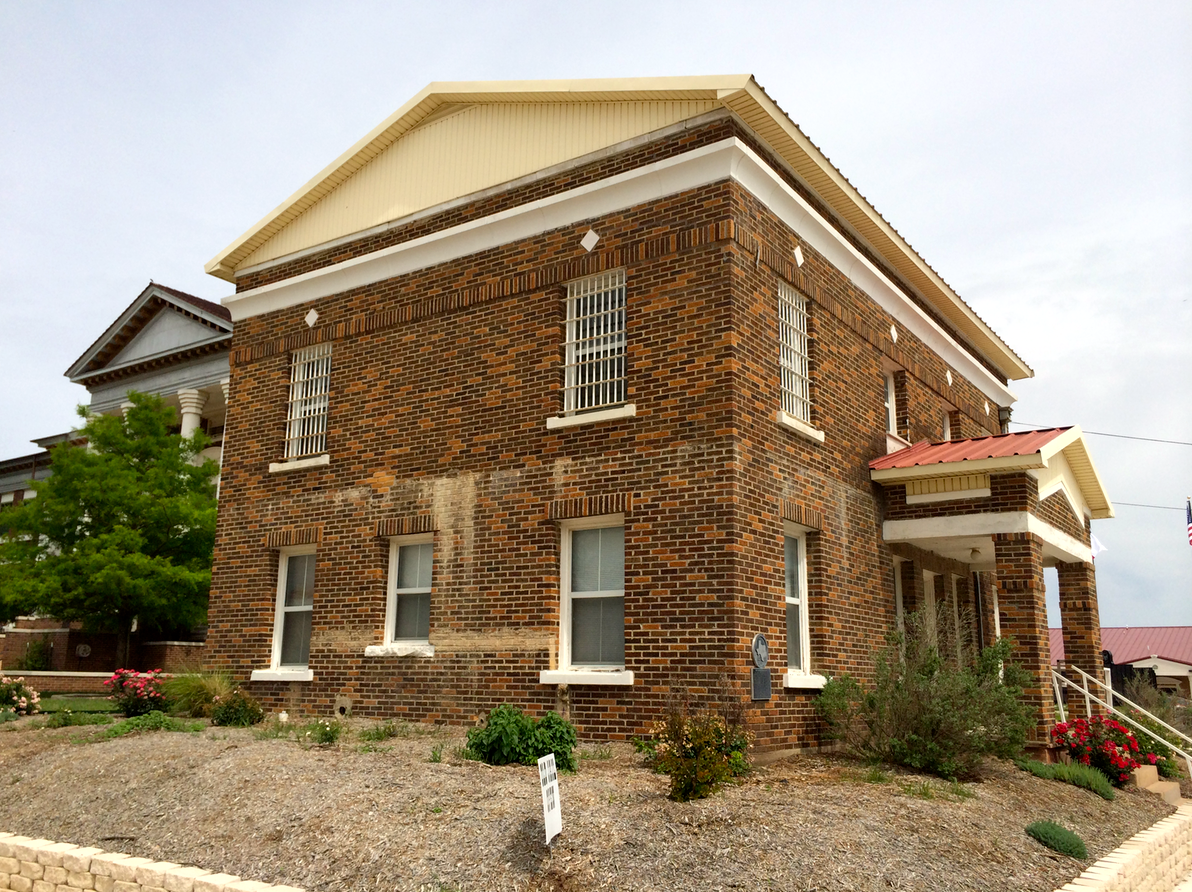 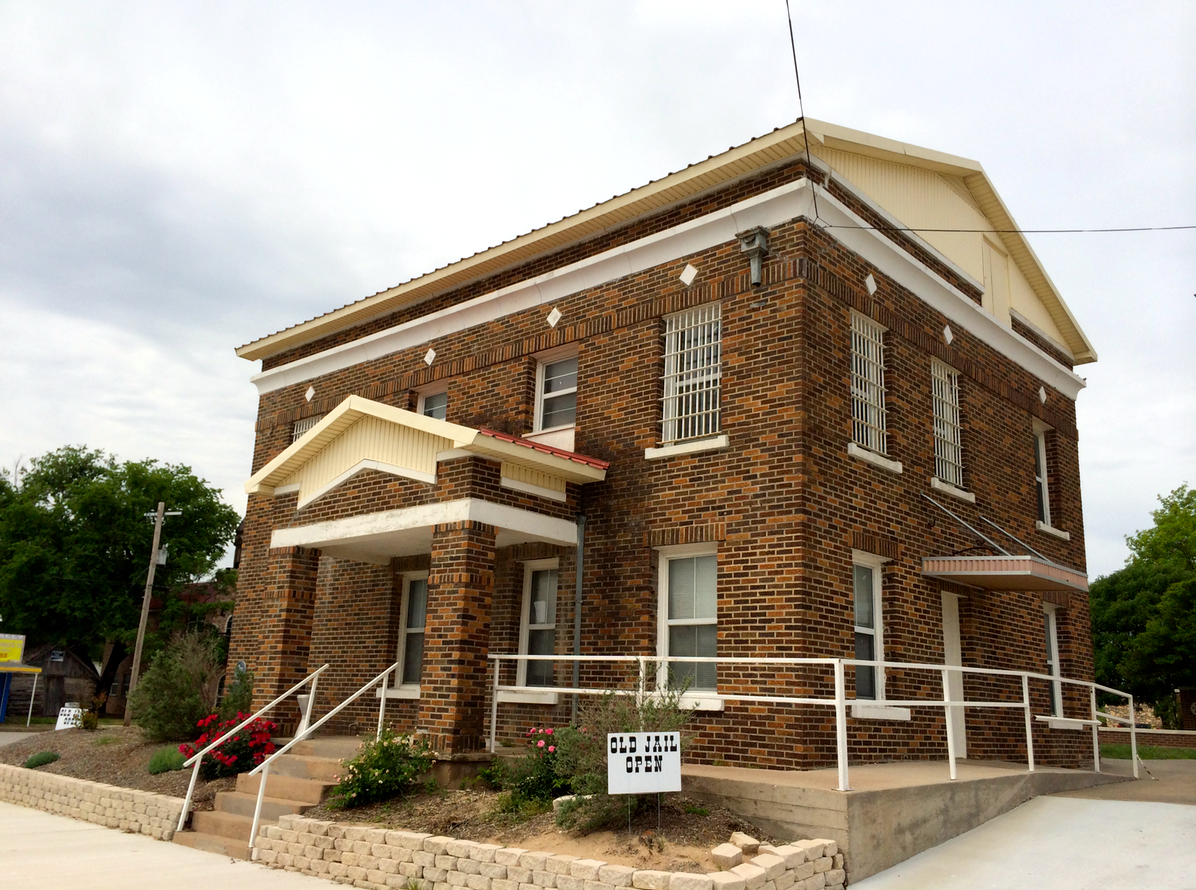 It now serves as a museum. 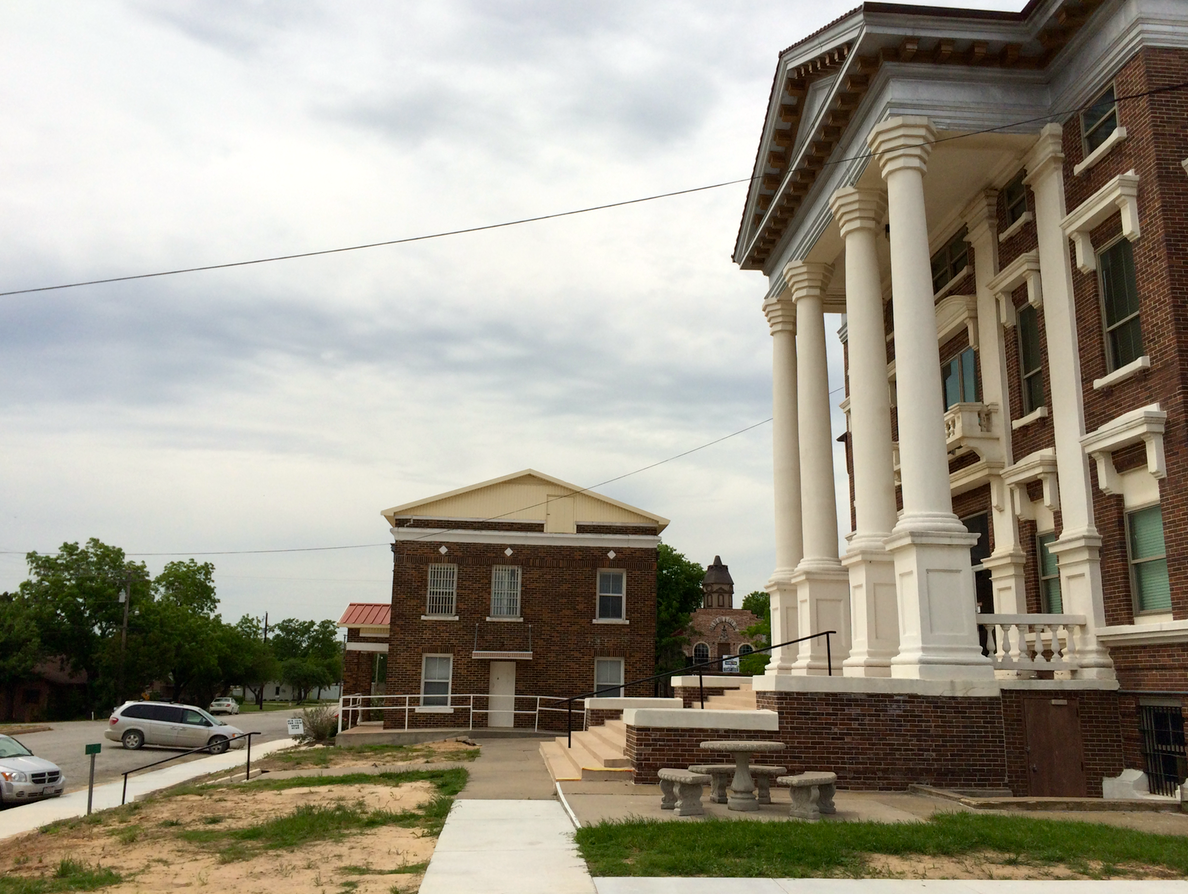 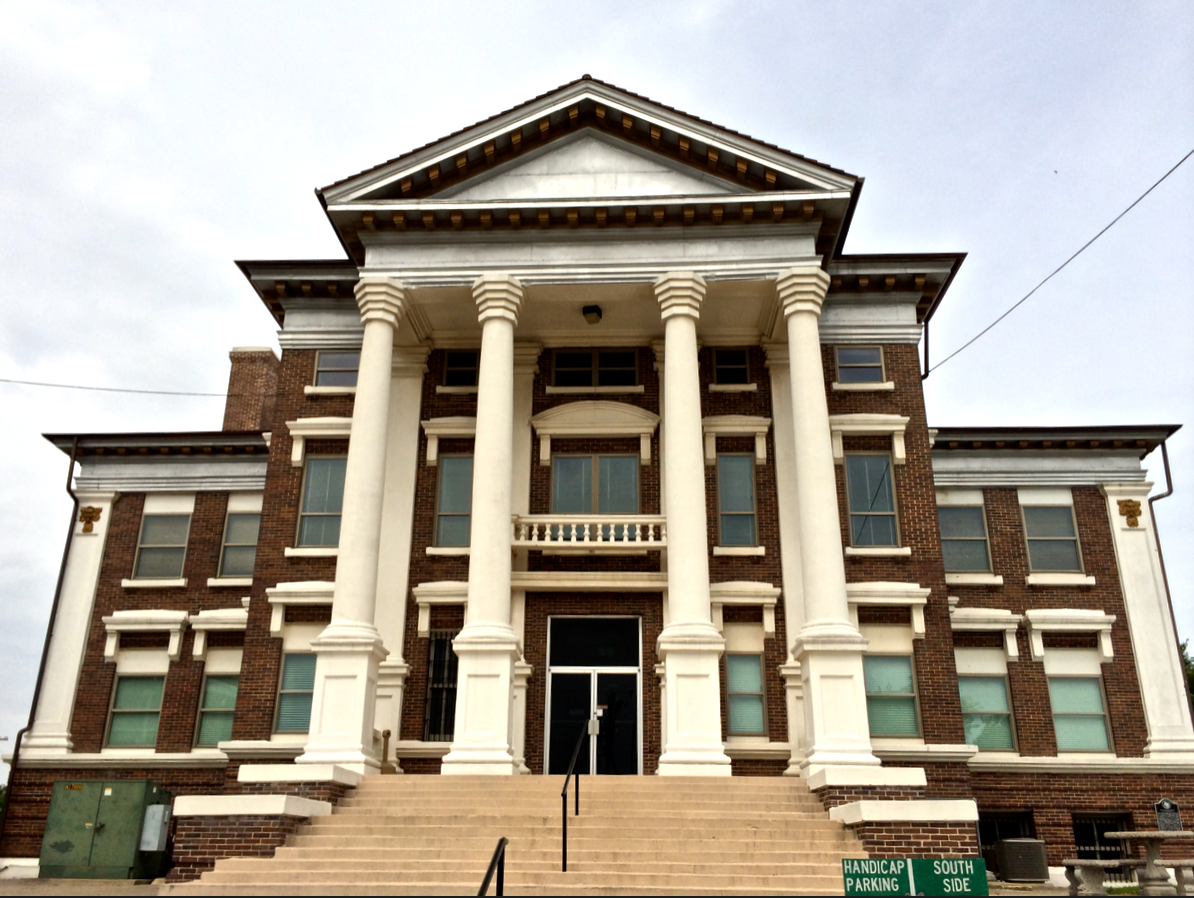 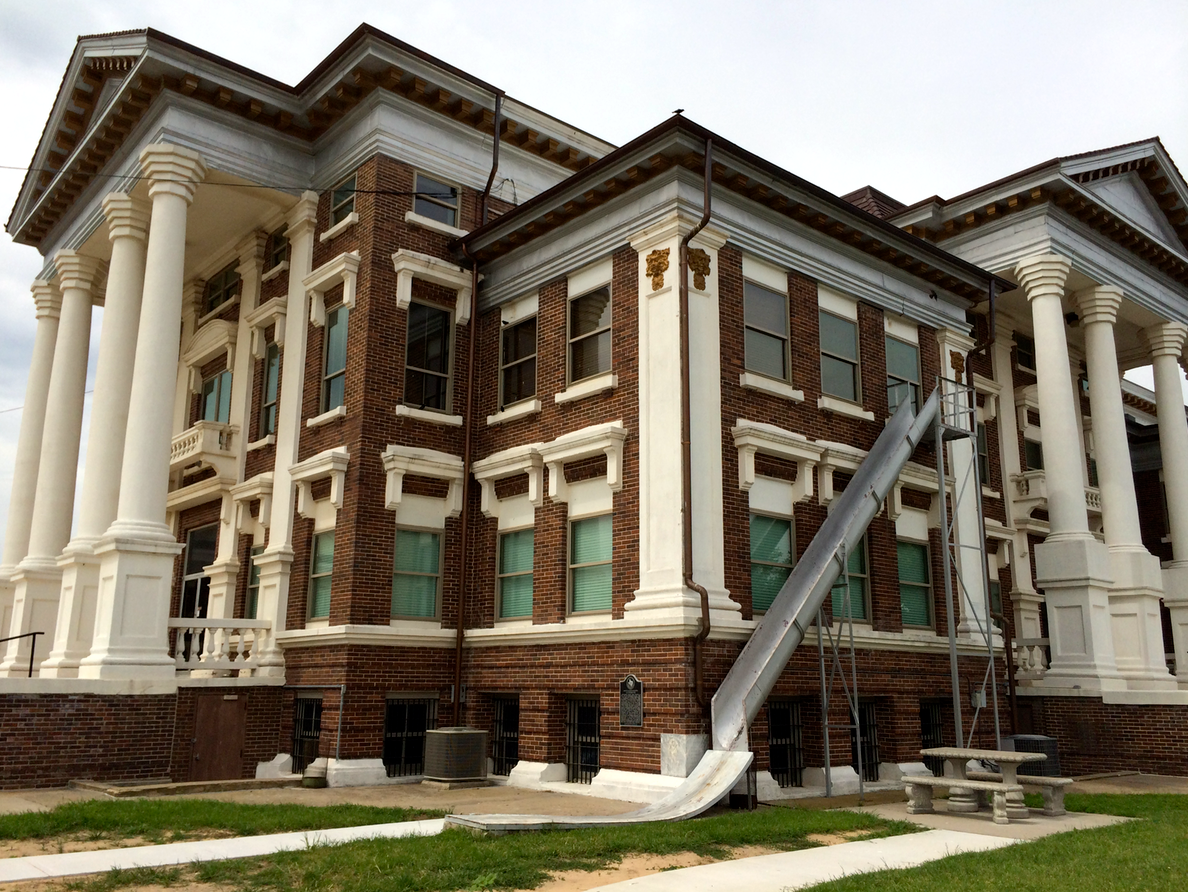 The northeaster corner features the historical marker, cornerstone, and one of two emergency fire escapes. 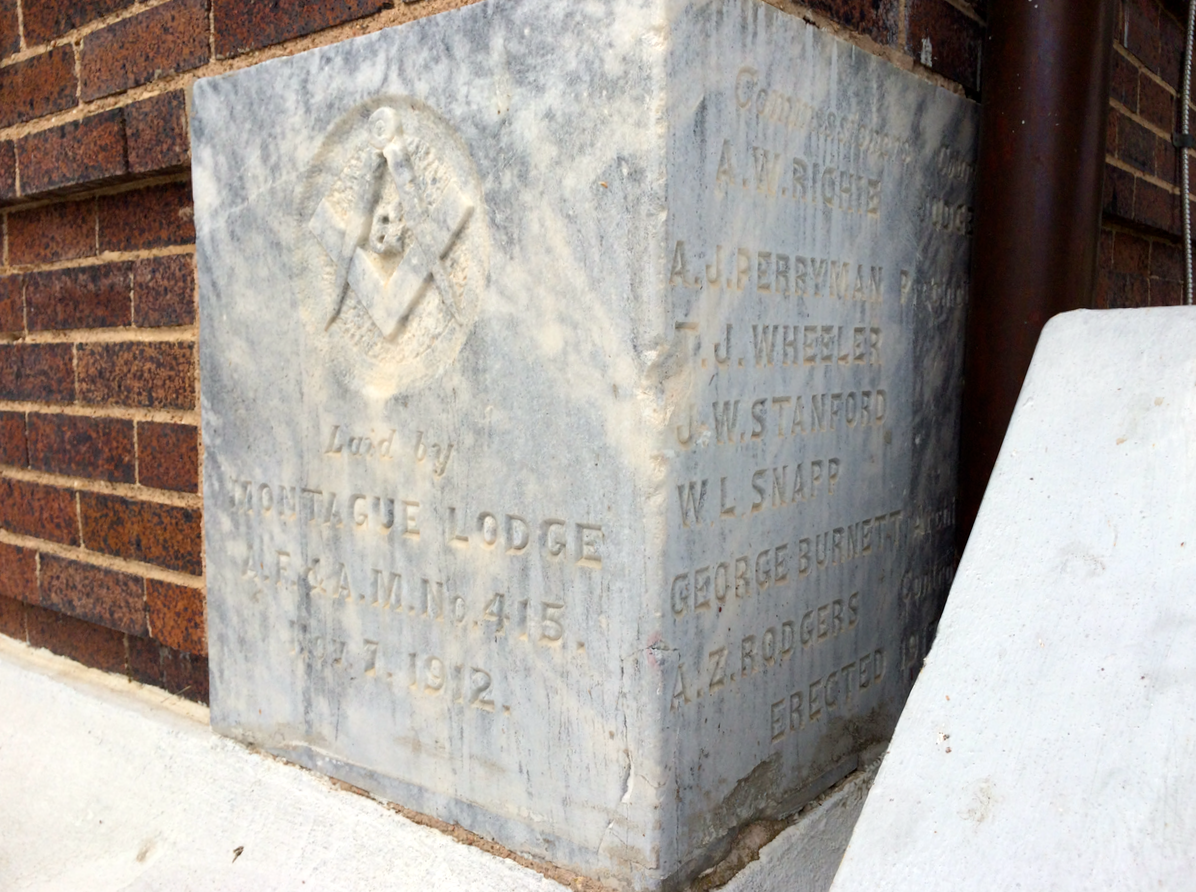 The fire escape prevents any great pictures of the cornerstone’s northern half. 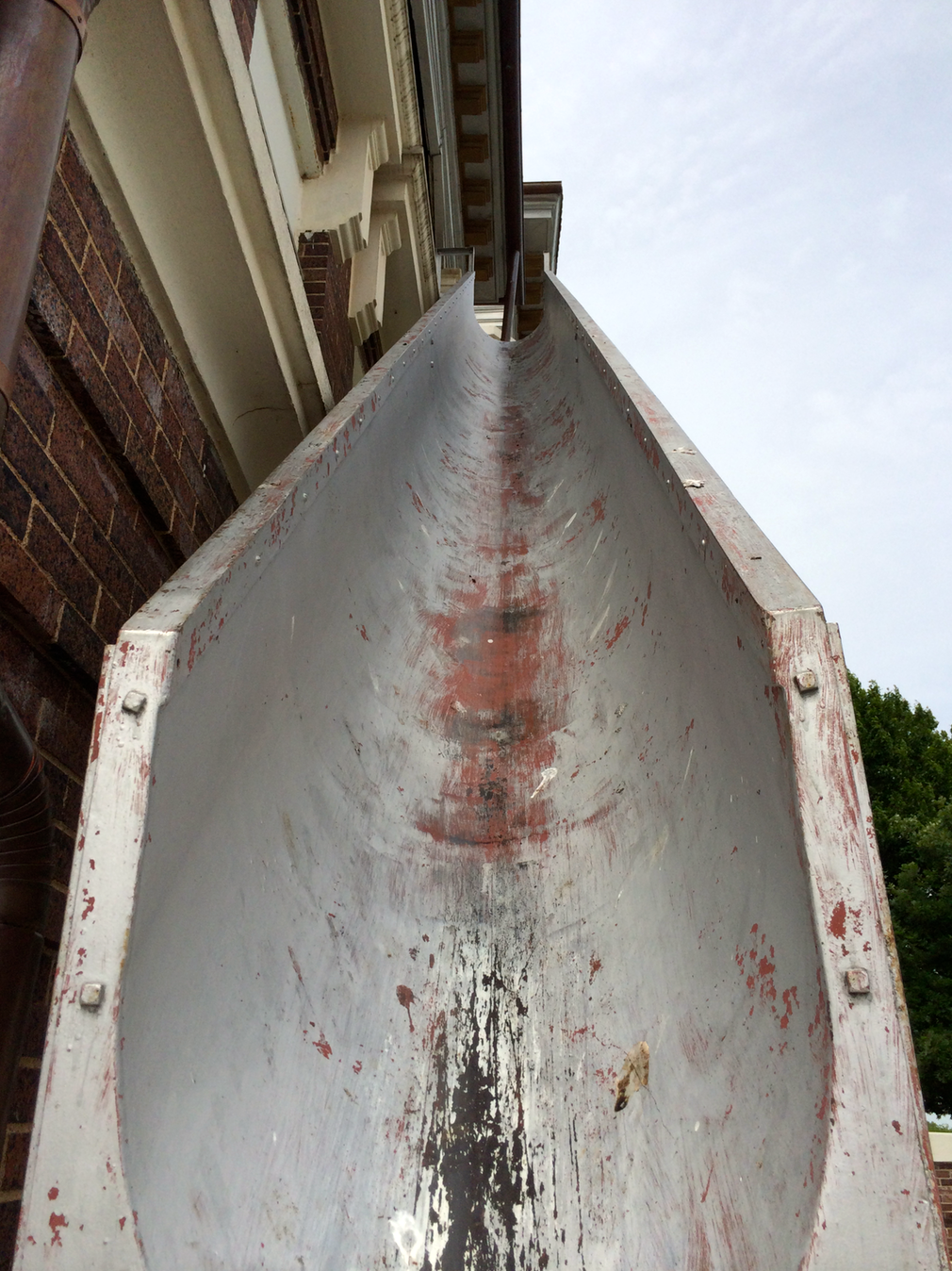 I’d hate for there to be a fire with this kind of mess. 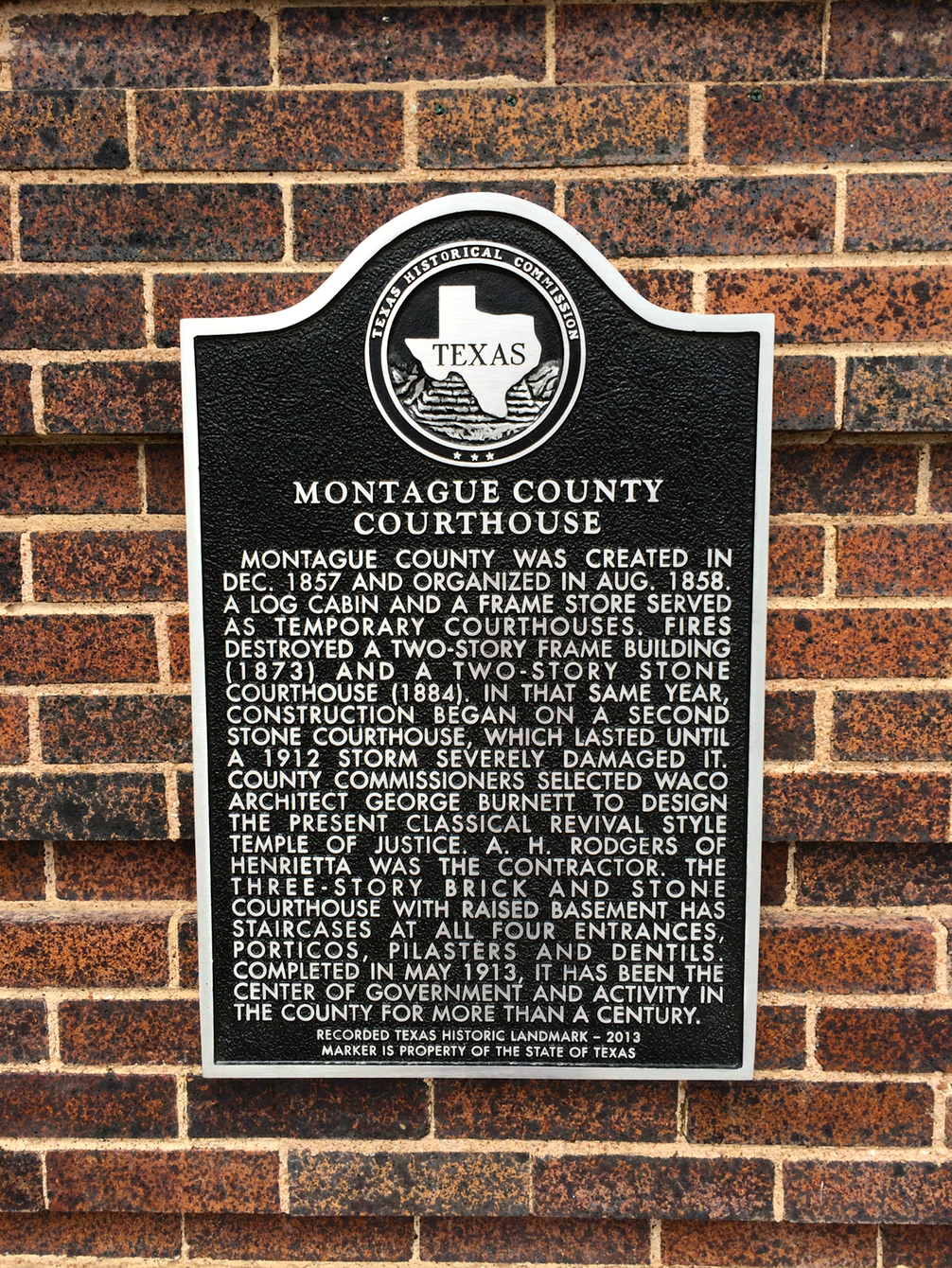 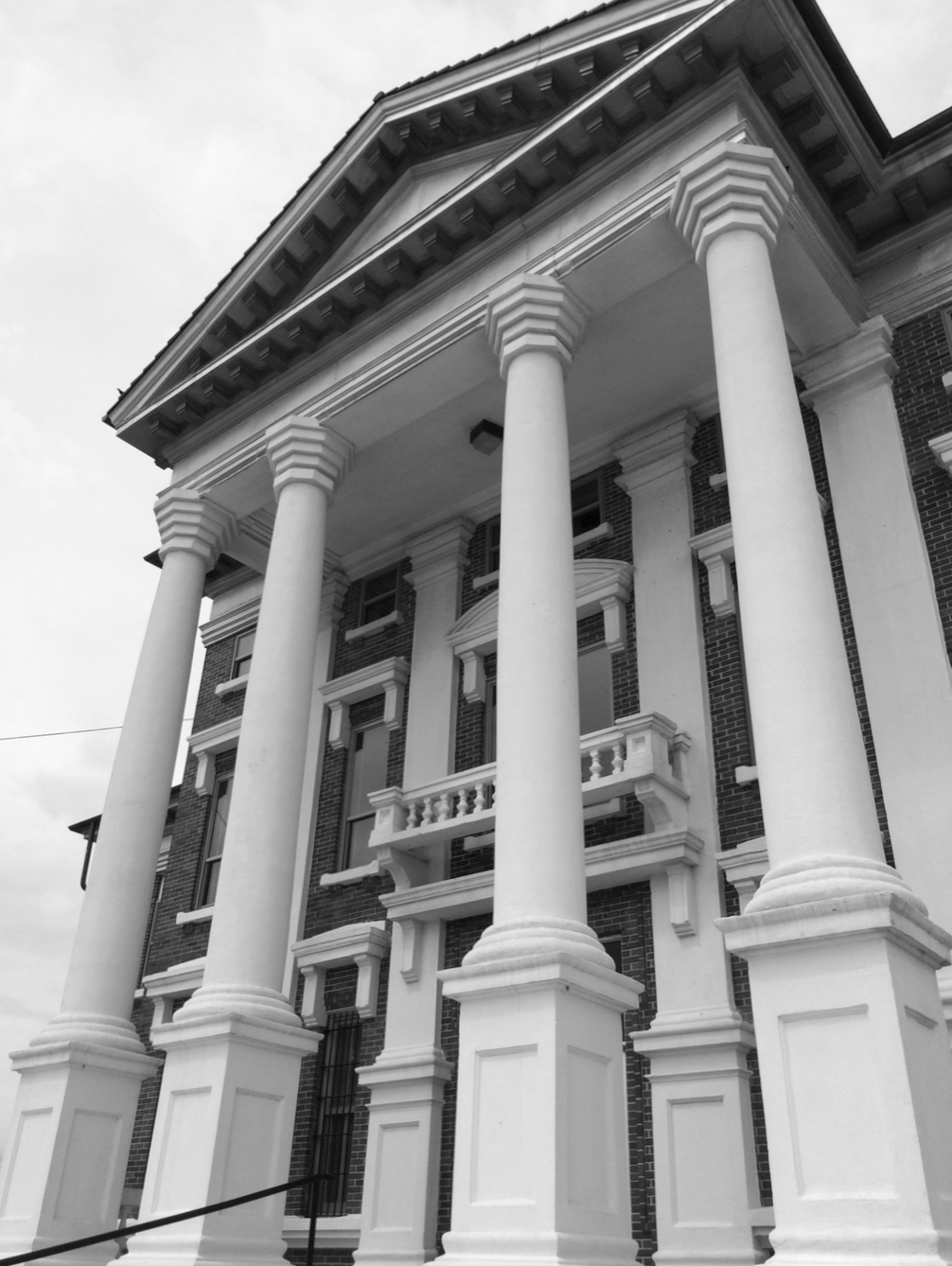 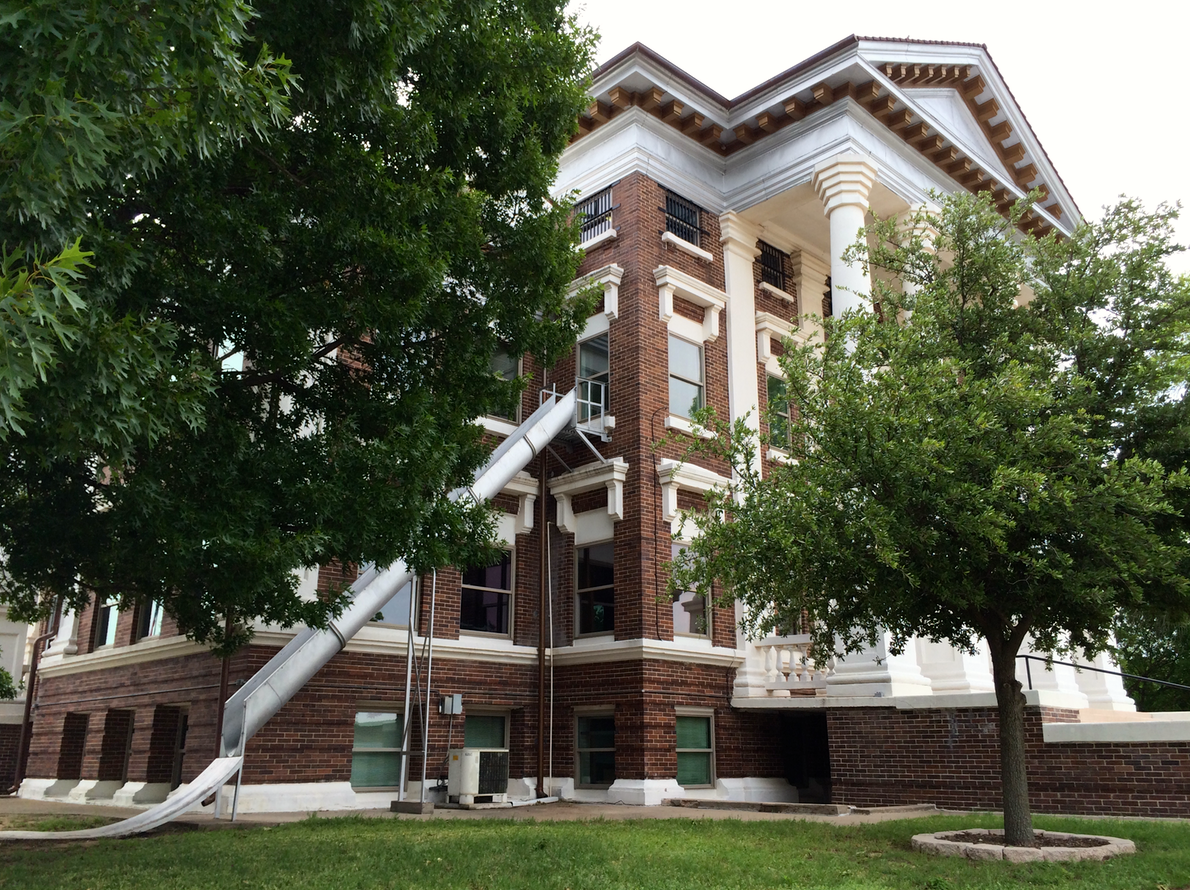 The northwest corner has the second fire escape. 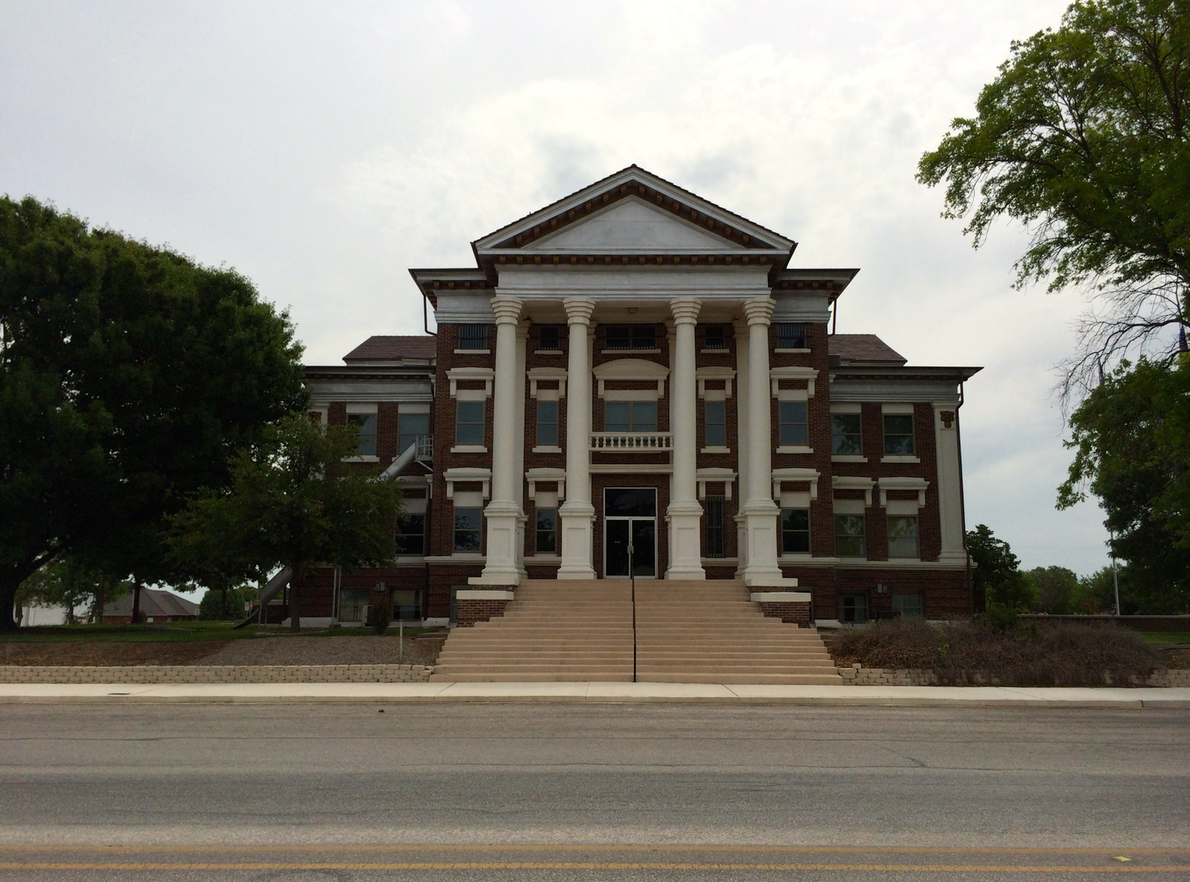 The view from the western façade 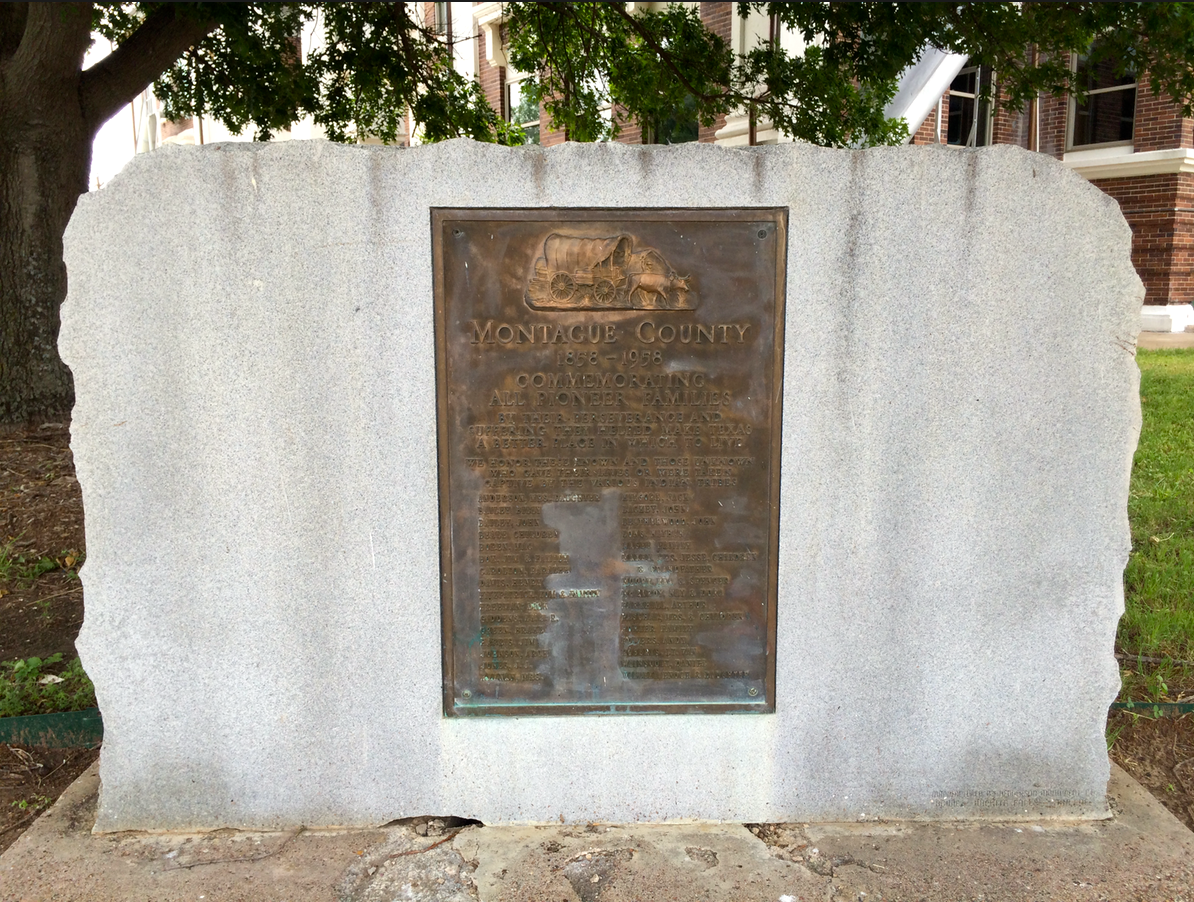 At the northwest corner is a monument to the pioneer families affected by early Indian raids. 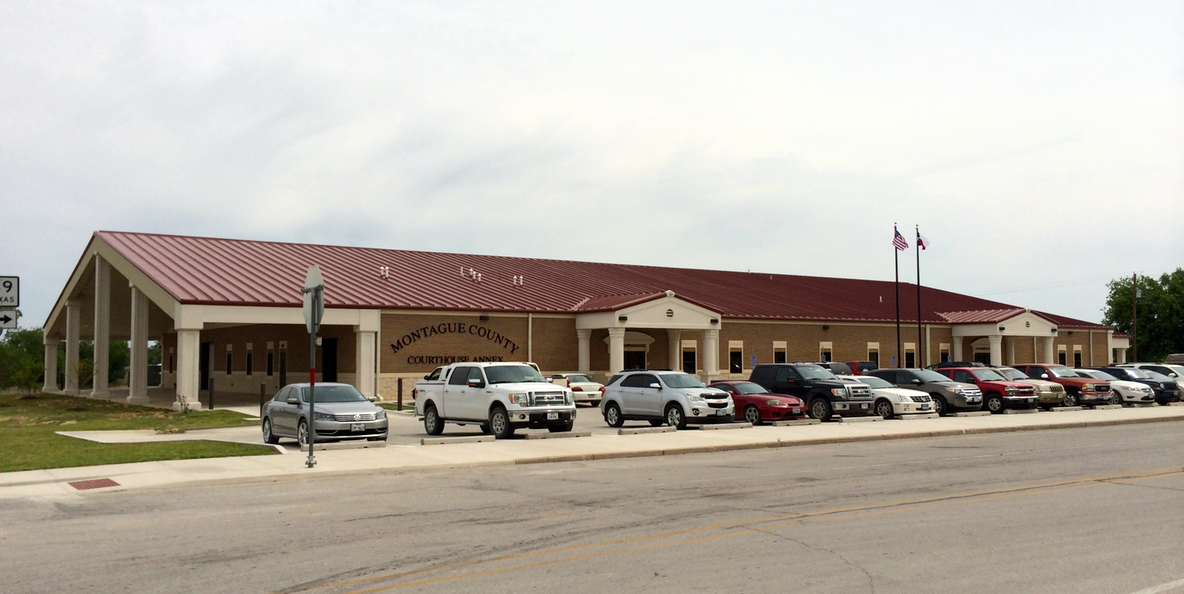 Across the street from the monument is the shiny, new 2013 courthouse annex. It was not here at the time of my first visit to Montague. It was very busy on this Saturday morning. 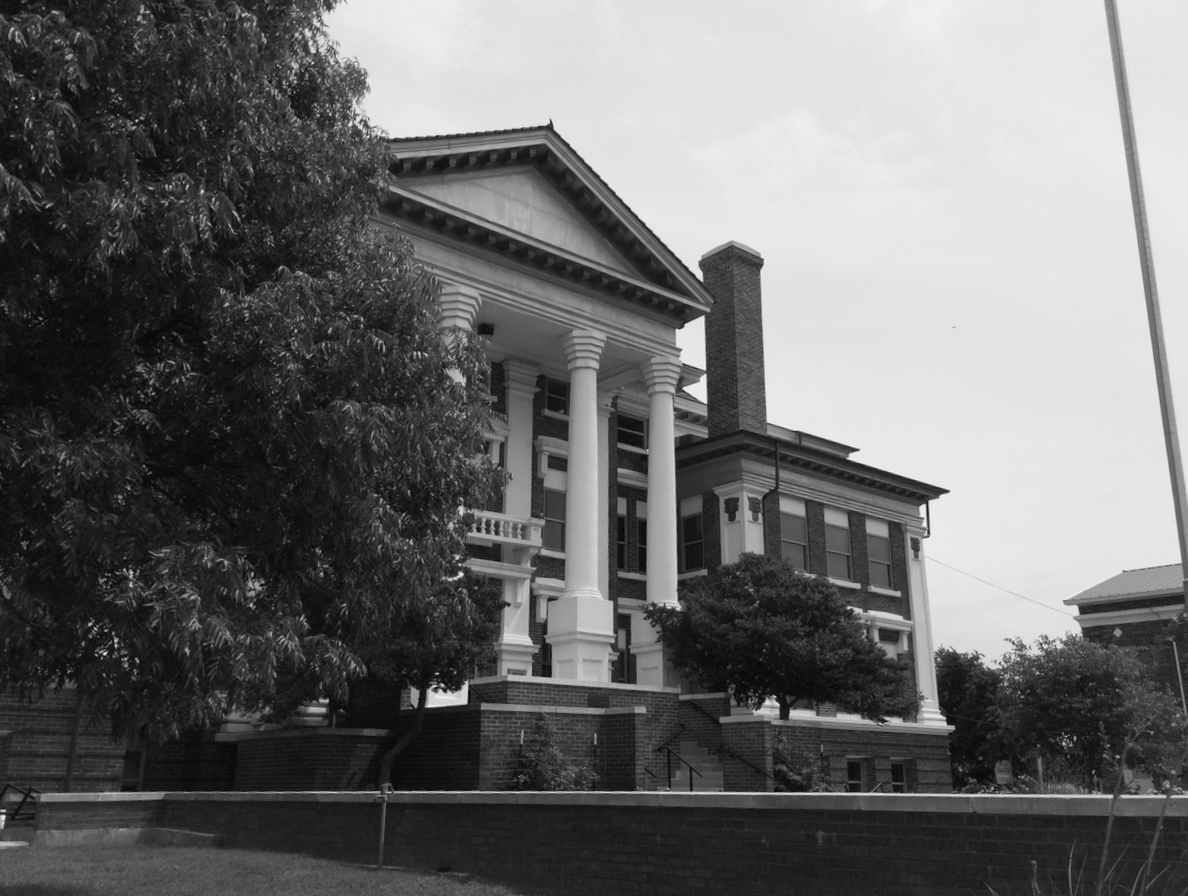 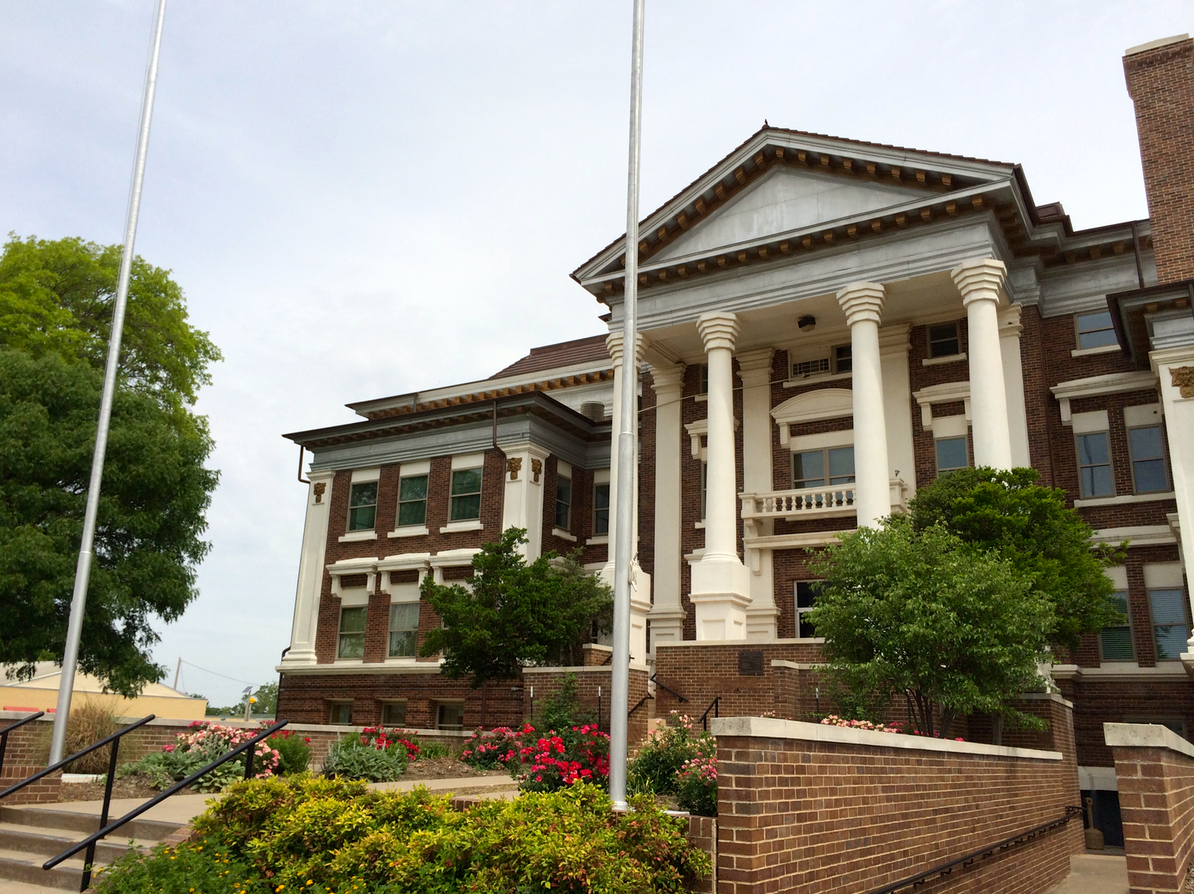 The southern façade is the most impressive of all. 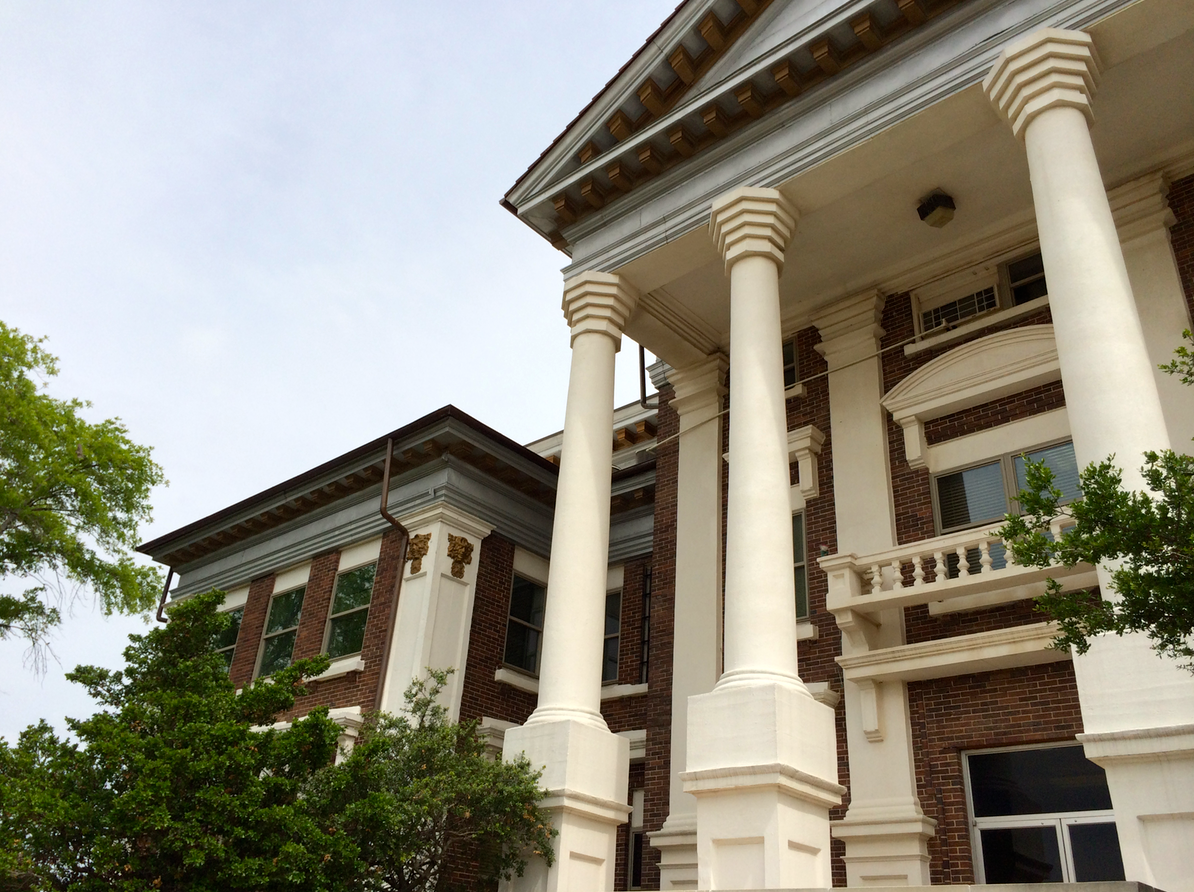 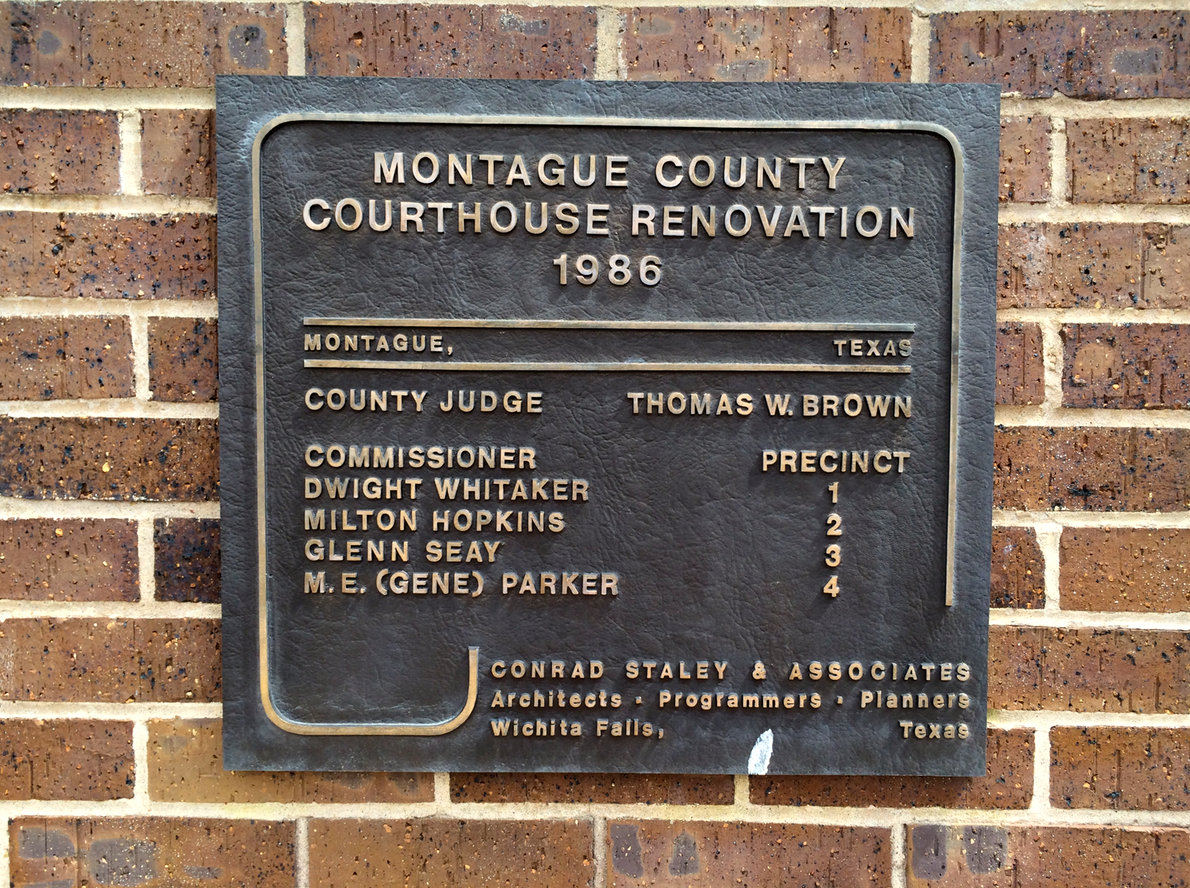 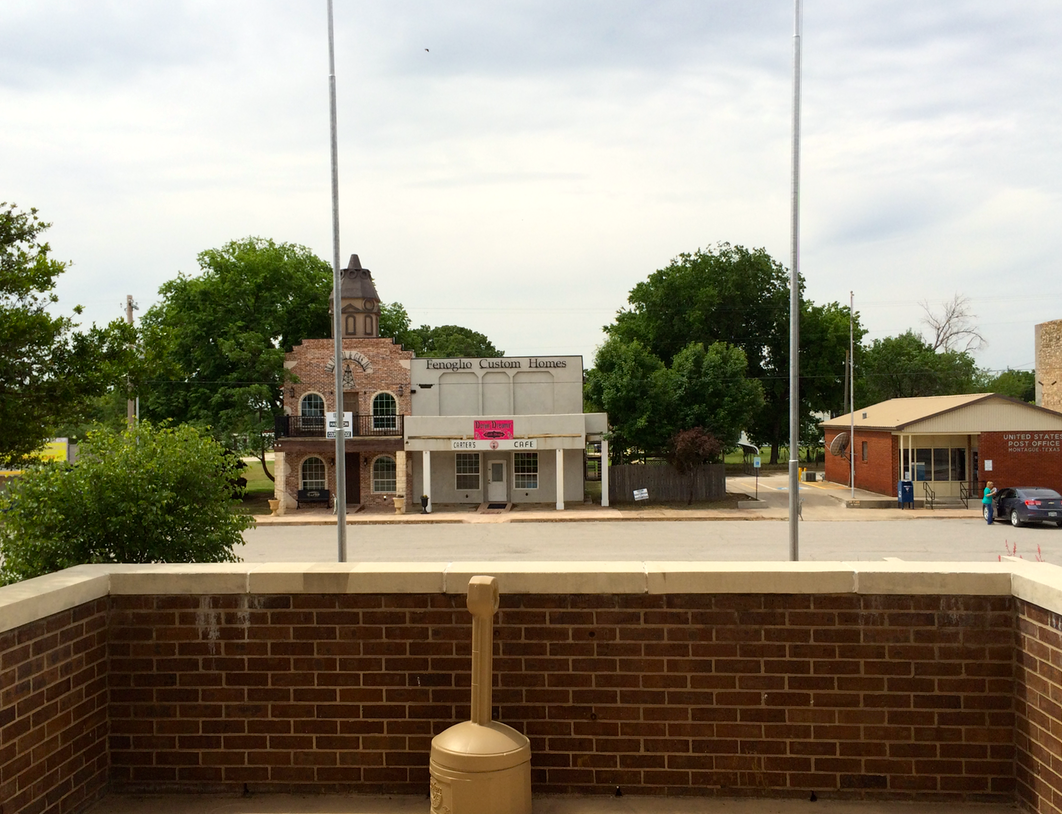 The view of Franklin Street from the southern entrance 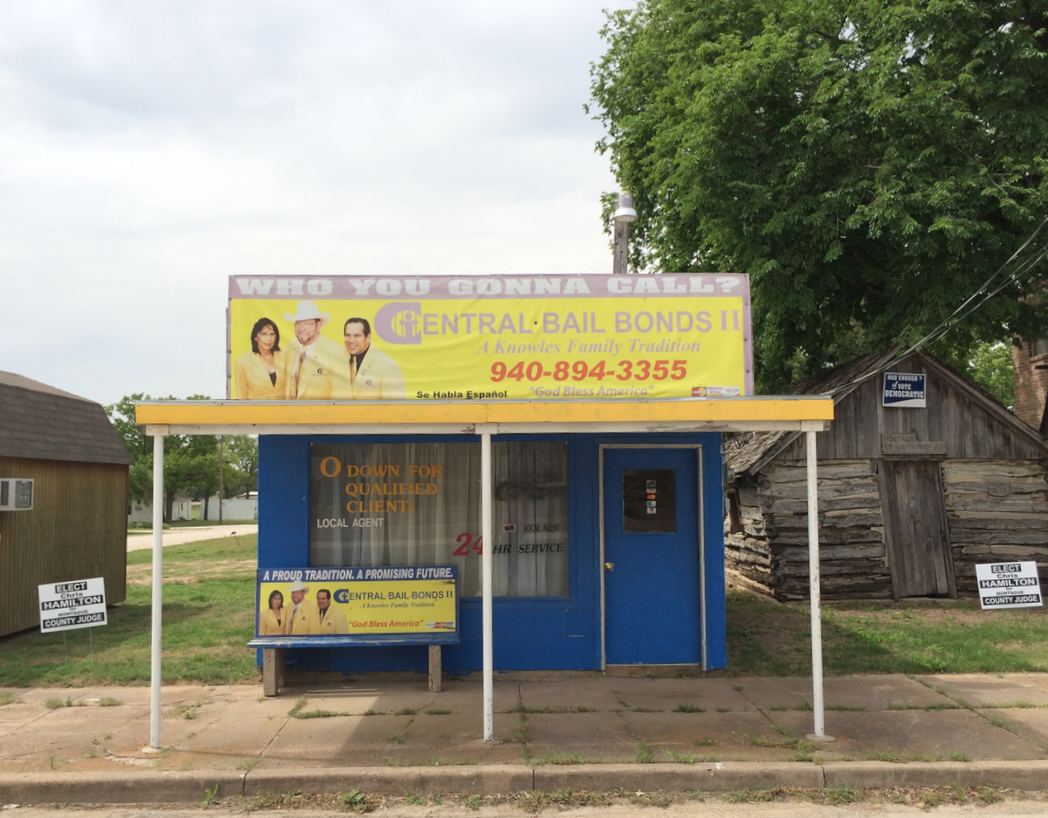 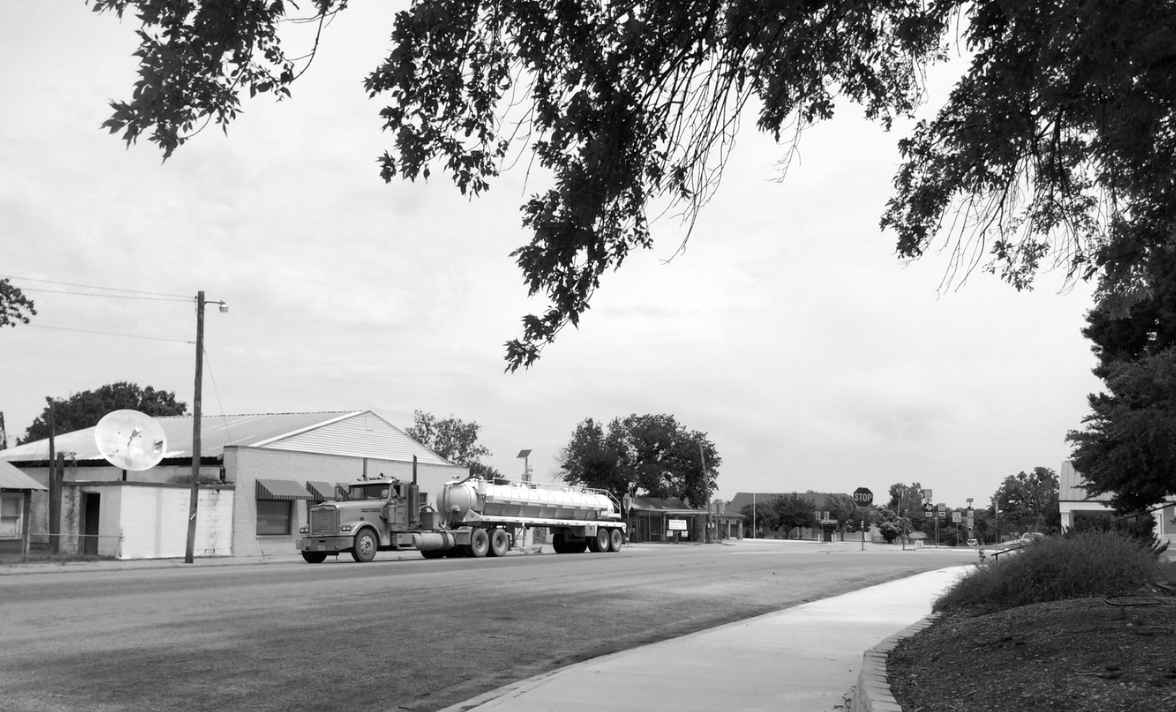