“Vegetation is typical of the Piney Woods area, with thick stands of longleaf, shortleaf, and loblolly pines and hickory, maple, sweet and black gum, oak, and magnolia trees. Grasses include Virginia wildrye, blackseed needlegrass, and purpletop.” 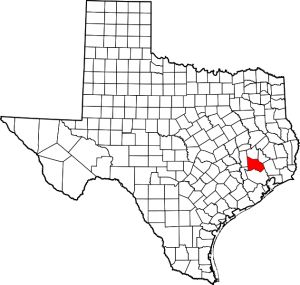 “Wildlife in the county includes eastern gray and fox squirrels, various species of bats and skunks, and small herbivores such as gophers, mice, rabbits, and armadillos, as well as raccoons, white-tailed deer, opossum, bobcat, coyote, and red and grey fox. Alligators, frogs, toads, and numerous species of snake, including the poisonous copperhead, cottonmouth, coral snakes, and rattlesnake, are found in abundance. A wide variety of birds-mockingbirds, cardinals, doves, quail, bluejays, and roadrunners, to name a few-are also native to the area.”

“Natural resources include timber, lakes, gravel, and oil; the Conroe oilfield was once the third largest in the United States. The county’s principal water source is the San Jacinto River basin drainage system, which includes Peach, Caney, Spring, and Bushy creeks.”

“During the mid-eighteenth century the Spanish made several attempts to establish settlements in the area and eventually set up three missions on the banks of Spring Creek within the current boundaries of Montgomery County, but the missions were abandoned in 1756 and no permanent Spanish settlements were made.”

“The future Montgomery County area was included in the colonization contracts issued by Spanish and later Mexican authorities to empresario Stephen F. Austin, and during the early 1820s Anglo-American settlers began moving into the region. Forty-two families of Austin’s colony obtained land titles from the Mexican government and settled in western Montgomery County.”

“Among the earliest settlers was Andrew Montgomery, who established a trading post at the crossroads of the Loma del Toro and lower Coushatta traces. He was soon joined by relatives and others, and the settlement eventually grew into the town of Montgomery.”

“During the early 1830s the population of the region increased rapidly, and in December, 1837 the Republic of Texas Congress established Montgomery County, which was named for its largest settlement. The new county was carved from Washington County, and its borders originally extended from the Brazos River on the west to the Trinity on the east, and from the Old San Antonio Road on north to the San Jacinto River on the south, an area which included future Grimes, Walker, San Jacinto, Madison, and Waller counties. The county’s present boundaries were established after the establishment of Waller County in 1870.”

“The town of Montgomery, situated on the stagecoach line that ran from Huntsville to Houston, was made the first county seat and became the focal point for new immigrants to the area. The first courthouse, a two-room log structure built in 1838, was replaced in 1842 by a two-story building of hand-hewn lumber, and in 1855 a large Greek Revival-style brick courthouse was completed.”

“Montgomery County’s economy in its early years was based on subsistence farming, but by the 1850s a thriving plantation economy, based largely on cotton production, had developed. By 1860 the county was producing more than 8,000 bales annually, most of which was hauled overland by horse-drawn wagons and ox carts to Houston and Galveston.”

“The end of the [Civil] [W]ar brought wrenching changes in the county’s economy. For many of Montgomery County’s whites, the abolition of slavery meant devastating economic loss. Prior to the Civil War slaves had constituted nearly a half of all taxable property in the county, and their loss coupled with a decline in property values caused a profound disruption for most planters. The African-American population of Montgomery County fared even worse. Most blacks left the farms owned by their former masters to seek better working and living conditions, but for the vast majority, the change brought only marginal improvement. Most ended up working as agricultural laborers or as share croppers, receiving one-third or one-half of the crop for their labors.”

“In 1871 the International-Great Northern Railroad built across the county; in 1879 a narrow-gauge line known as the Houston, East and West Texas was constructed; and in 1880 the Houston and Texas Central built a branch line from Navasota to Montgomery and extended eastward to Conroe.”

“Oil was subsequently discovered in several other areas of the county, and the combined oilfields of Montgomery County made it one the richest oil producing areas in the nation.”

“In the early 1990s the majority of nonlumber-related agricultural income came from livestock and livestock products, with smaller amounts from greenhouse and nursery products. Lumbering is once again a major industry; after the wholesale cutting of the 1920s many forests were allowed to regrow, and by the early 1990s over three-fourths of the land was timbered.”

“The Sam Houston National Forest covers much of the northeast and northwest portions of the county. The main impetus for growth in the past two decades has come from the expansion of nearby metropolitan Houston. Many Montgomery County residents now work in Houston, and the spread of the city’s suburbs into the county has led to a rapid rise in population.”

“In recent years Montgomery County has become a recreation destination for many Houston residents. The area, with its abundant lakes and forest, offers numerous opportunities for hunting, boating, fishing, and hiking. Among the most popular attractions are the Sam Houston National Forest, W. Goodrich Jones State Forest, Lake Conroe, and Lake Woodlands. Visitors area also attracted by the shopping opportunities in Conroe, the annual county fair, and the Conroe Main Street Festival.”

I visited the courthouse during the Conroe Cajun Catfish Festival which is hosted on the square. In order to charge entry, a gate was erected, blocking my access to the courthouse. Luckily, we visited early in the day before the festivities, so we were able to bypass the entrance and proceed to photograph.

The first courthouse in Conroe was constructed in 1891 and designed by popular Houston architect, Eugene T. Heiner. A new courthouse, designed in 1936, replaced it on the town square. Additions were made in the 60s. 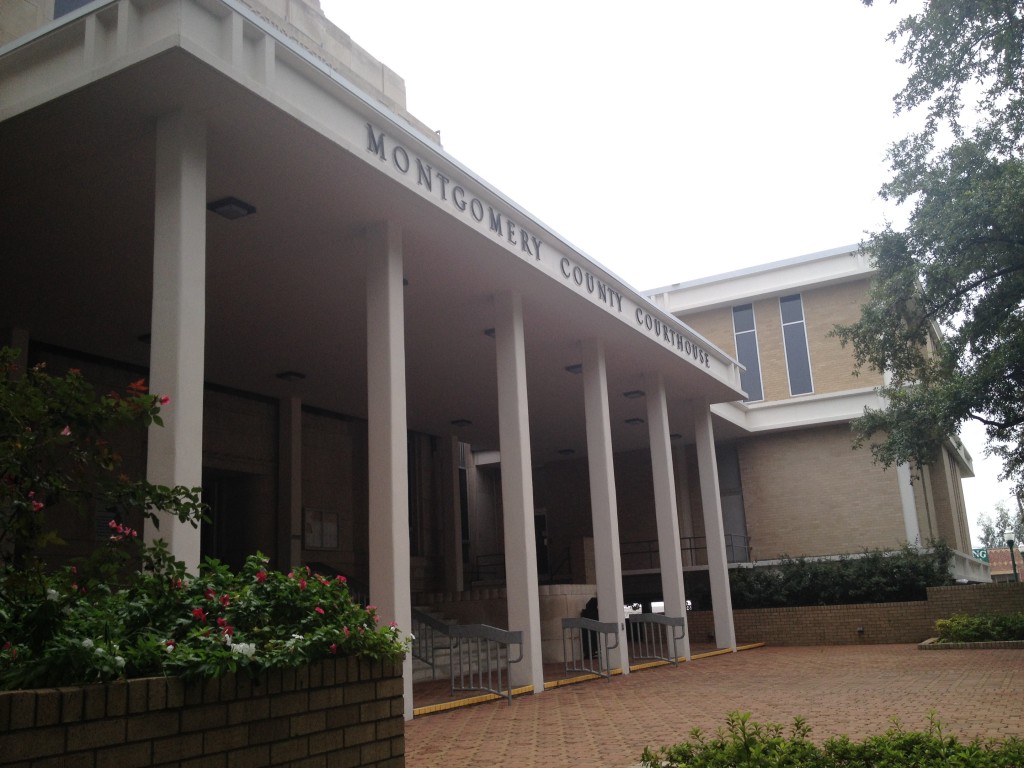 Even with being able to bypass the festival gate, this courthouse was still fairly difficult to photograph. 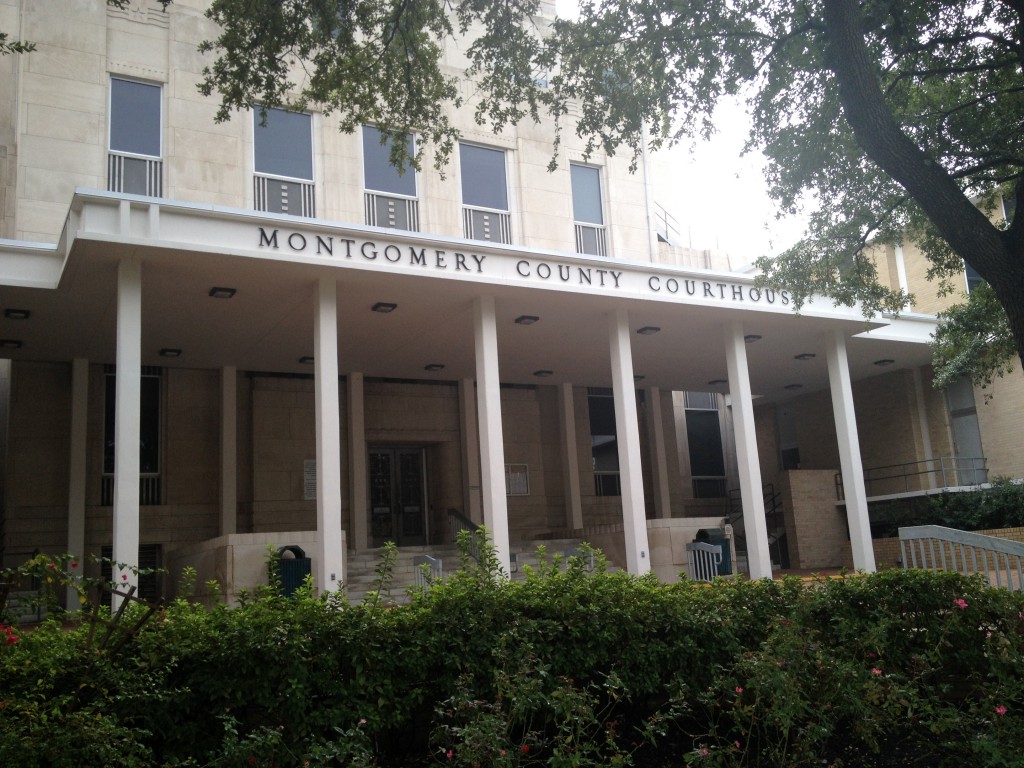 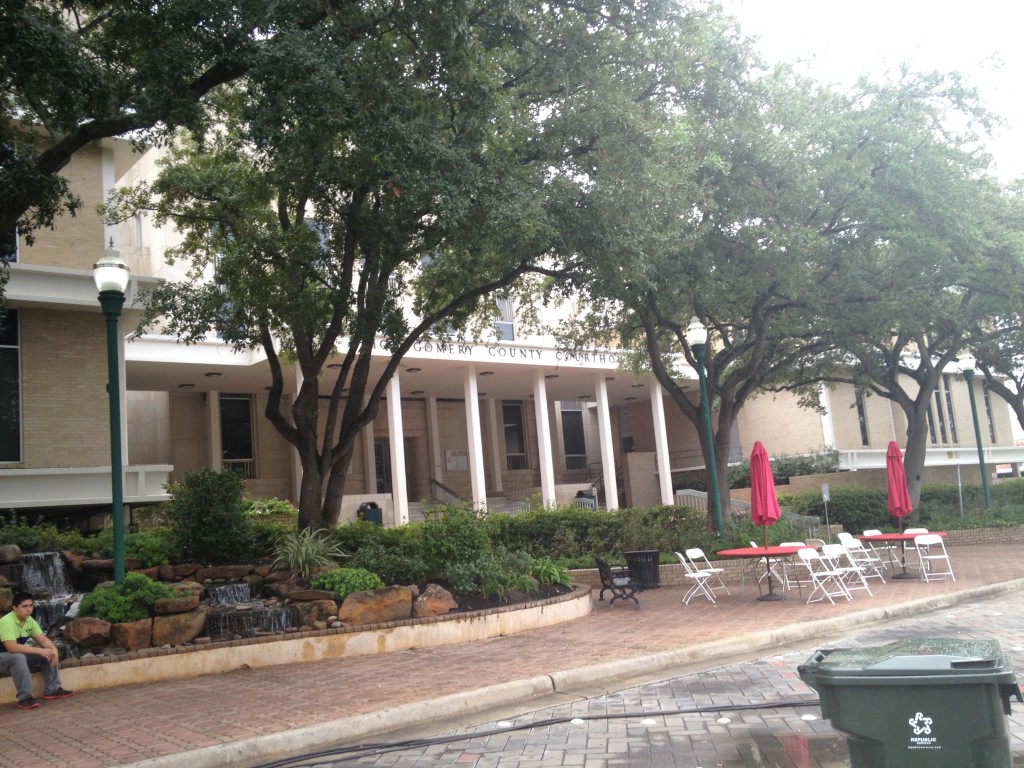 The “front” entrance is well landscaped. 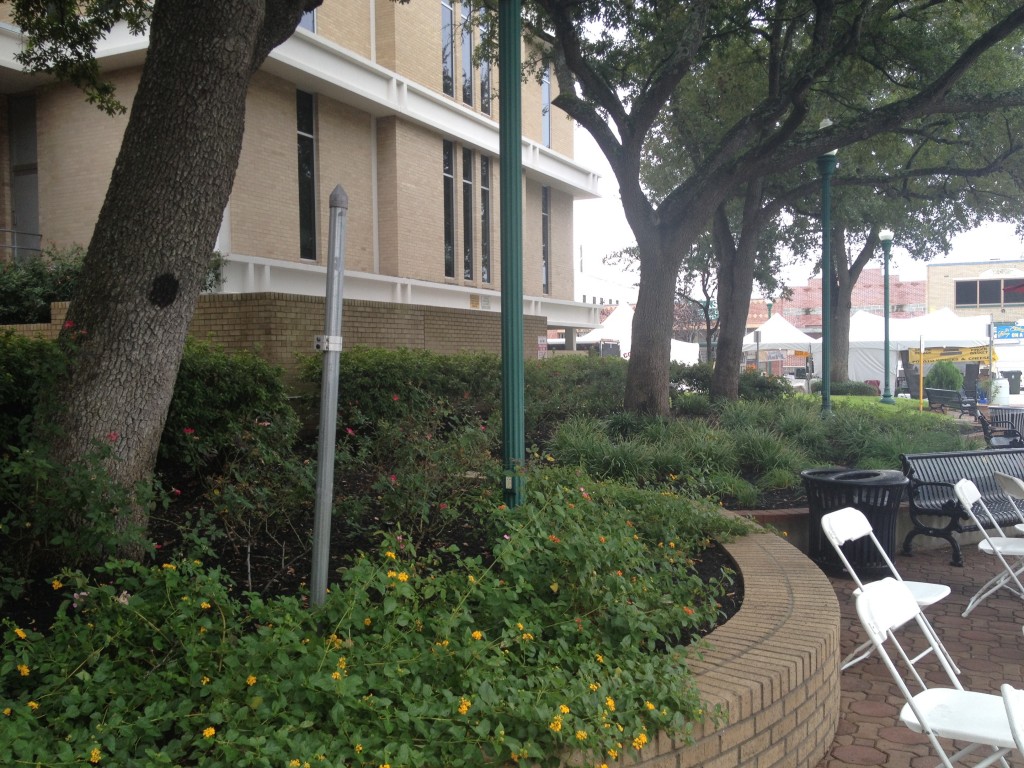 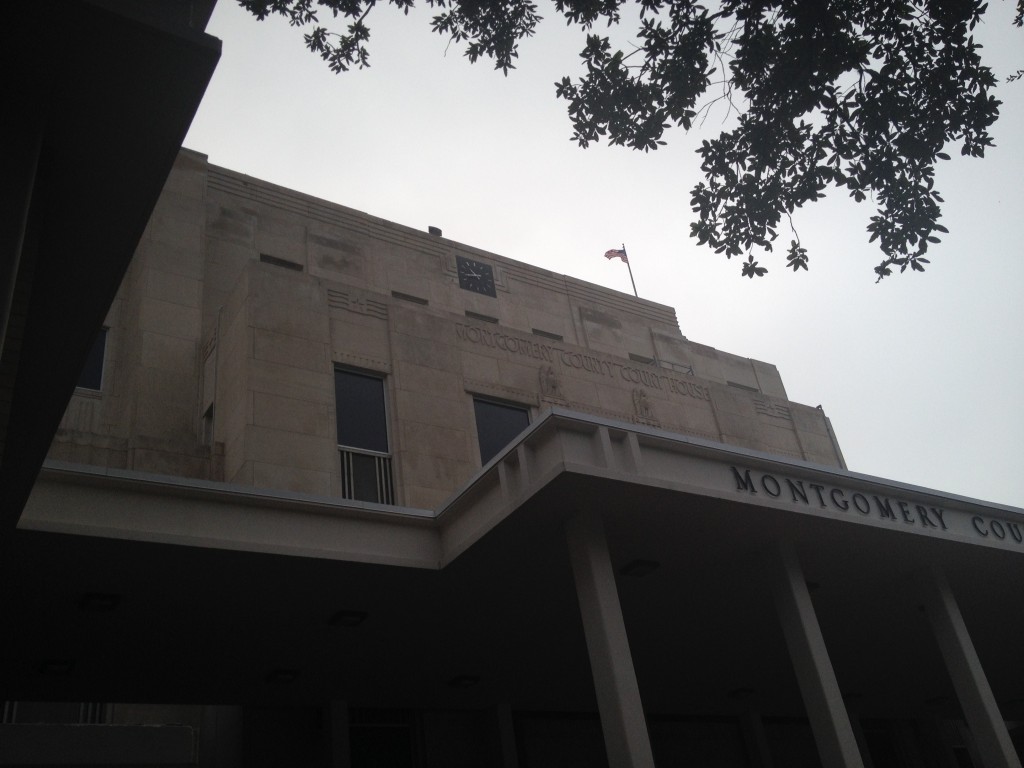 The original 1936 portion of the building does “scrape the sky” better than the 1965 addition. 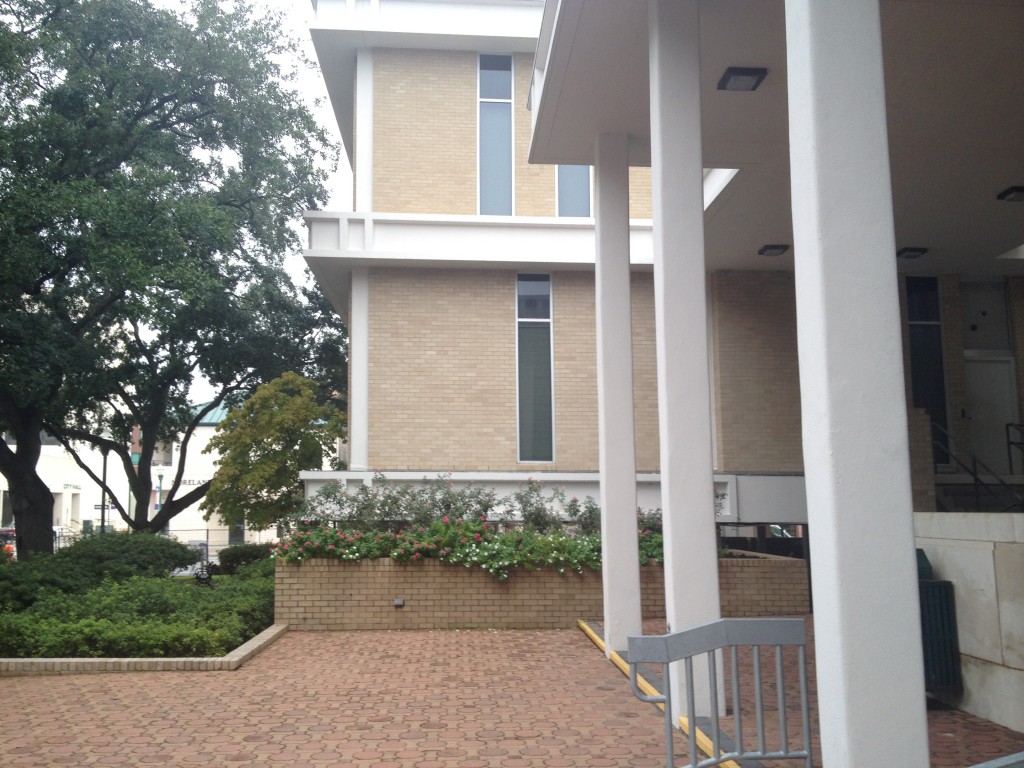 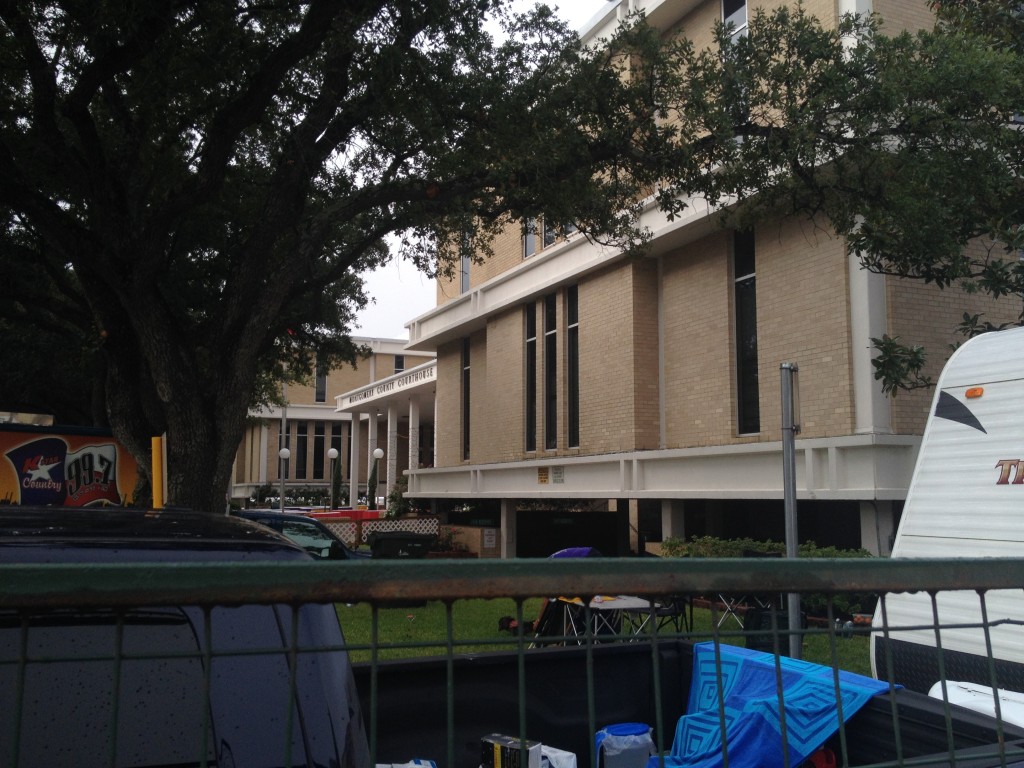 The 1965 addition is suspended above the ground. 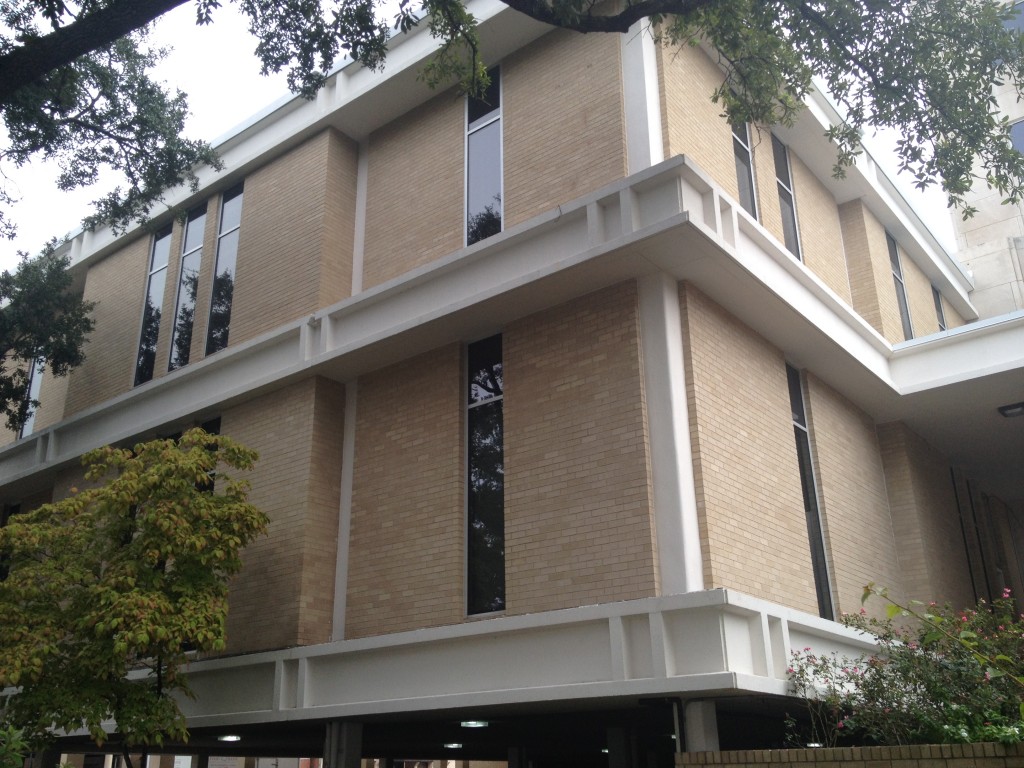 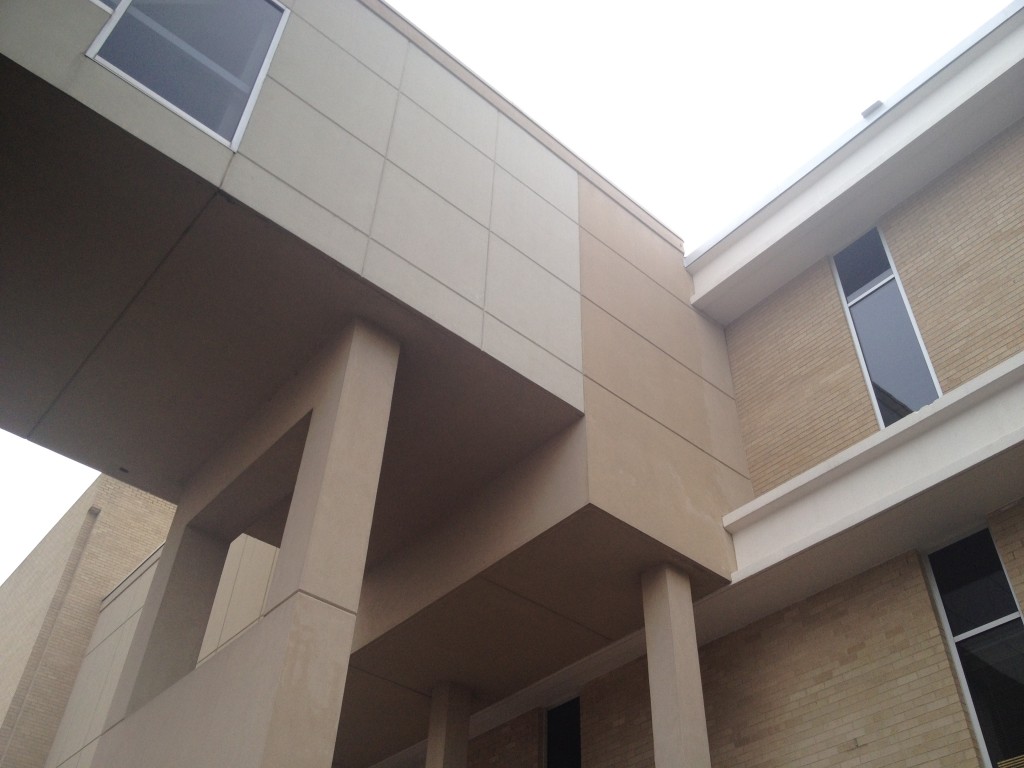 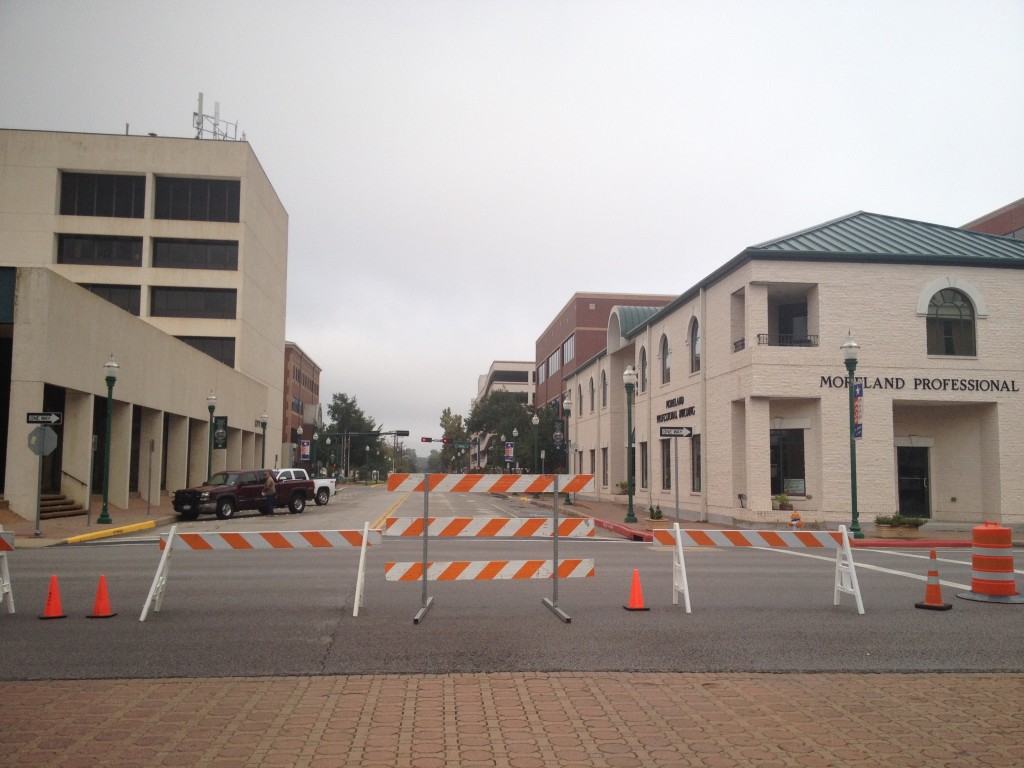 Thompson Street was blocked off from the square due to the festival. 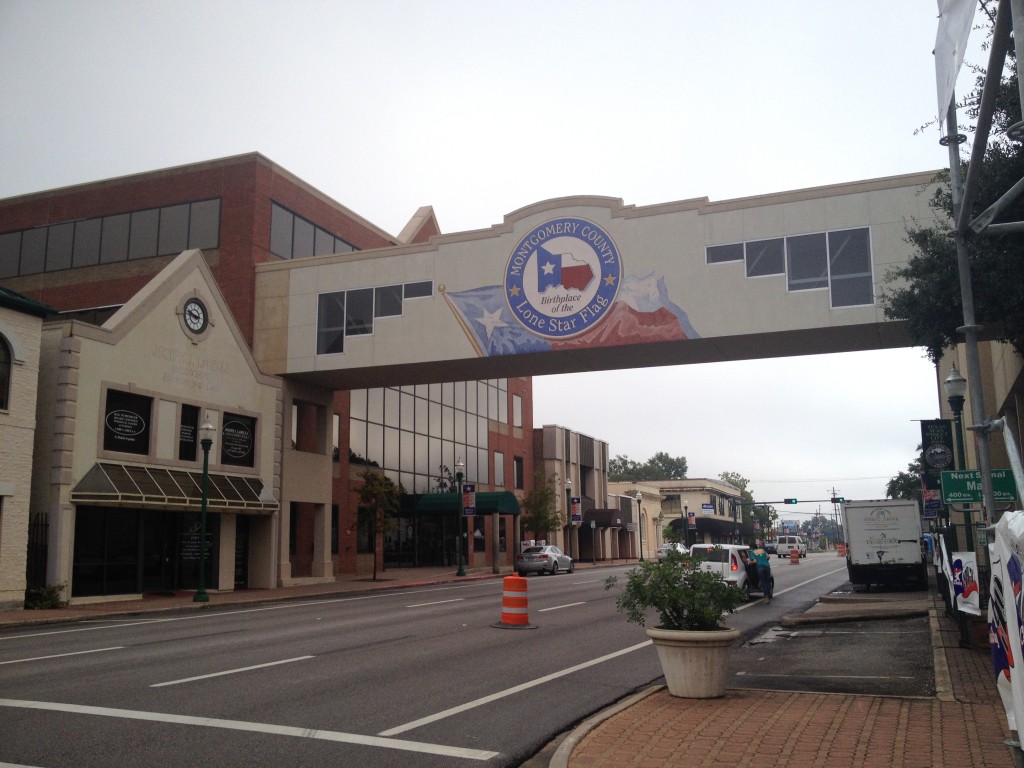 This hallway connects the courthouse to the annex across Davis Street. 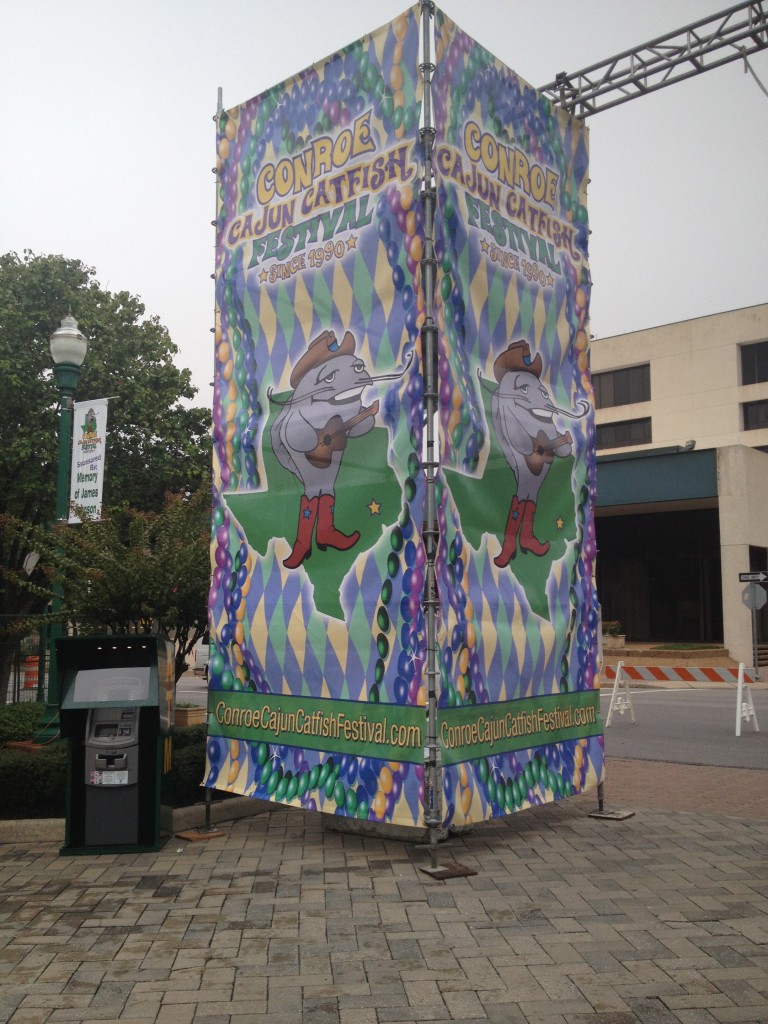 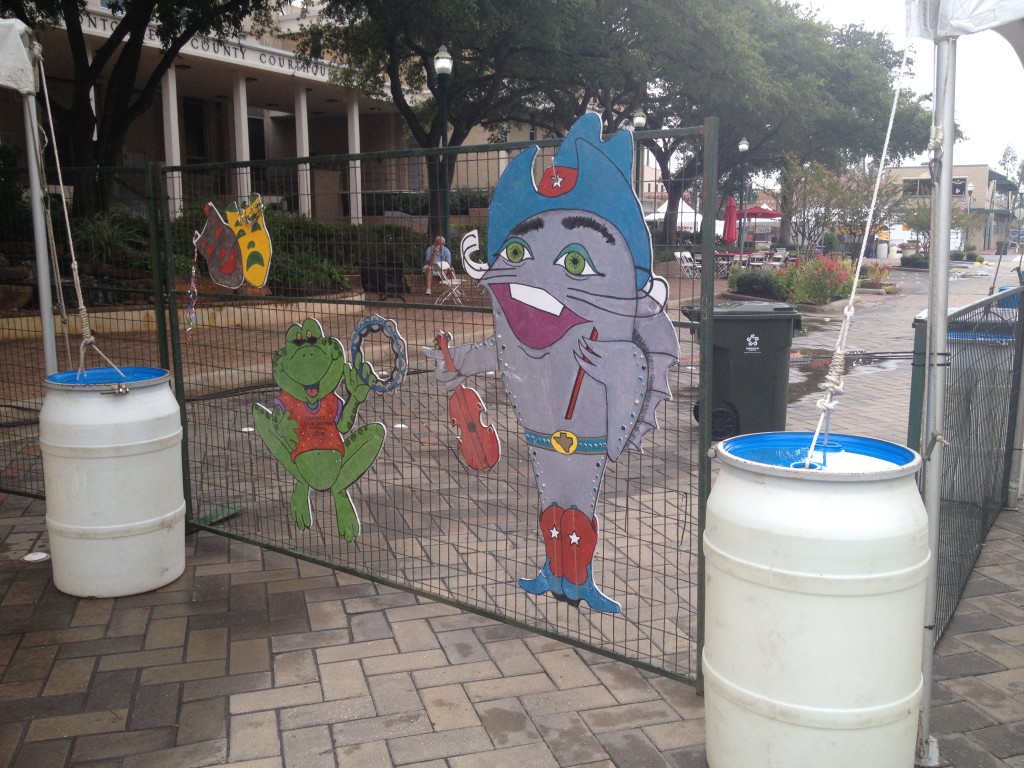 It’s almost a shame that I wasn’t able to at least try the catfish.