“The county was named for Isaac Parker. It covers 902 square miles of undulating to hilly land; elevations range from 700 to 1,200 feet above sea level. The county’s gently rolling plains, situated mostly in the Rolling Timbers vegetation region, are covered by tall grasses, mesquite, and oak. Elm, walnut, and pecan trees are common along streams and valleys.”

“No effort was made to colonize the area that is now Parker County area under Spanish or Mexican rule, although parts of the county were part of an early land grant from Stephen F. Austin and Samuel May Williams. Kiowas and Comanches controlled the area in the late 1840s, when settlers of European descent began moving into the region on trails along the Brazos that had previously been established by the Indians. Immigration to the area was encouraged during the early 1850s by an outbreak of malaria in Tarrant, Denton, and Collin counties, and by the establishment of the Butterfield Overland Mail route in 1855.”

“Under the leadership of Isaac Parker 224 settlers in the area signed a petition requesting the establishment of a new county, and in December 1855 the state legislature formed Parker County from Bosque and Navarro counties. Weatherford was designated as the county seat, and by 1858 the town had a new two-story brick courthouse surrounded by a handful of cabins and tents.”

“In September 1861, after the beginning of the Civil War, many young men from Parker County enlisted in Parsons’s Brigade. Nine companies of eighty men each left the county to serve the Confederate cause during the war. Their absence contributed to population decline and disrupted the county economy and society. Since most of the men under forty-five had left to fight in the war, fears of Indian raids increased. In an effort to protect residents, a police force was appointed to patrol Weatherford, and many ranchers moved their families to more secure lodging in the county seat. By the end of the war many properties were in disrepair and much of the area’s livestock was scattered.”

“Parker County’s recovery from the war was slow, partly because of continued Indian attacks during the late 1860s and early 1870s. In 1870 the agricultural census reported only 148 farms and ranches in the county, fewer than half the number ten years earlier, and only about 6,000 acres was classified as “improved.” Corn and wheat production and livestock counts that year remained significantly below pre-war levels.”

“The county’s population and economy continued to expand during most of the late nineteenth century, encouraged by the construction of three railroads that built through the county during this period. The Texas and Pacific Railway extended its tracks through Weatherford in 1879, and in 1887 the town became the northern terminus of the Gulf, Colorado and Santa Fe. Another railroad, the Weatherford, Mineral Wells and Northwestern, completed its construction in the county by 1891.”

“The economy continued to grow in the first years of the twentieth century, partly because cotton cultivation continued to expand rapidly. By 1910 almost 90,000 acres in the county was planted in cotton. Other farmers diversified into fruit, and by 1910 there were almost 144,000 fruit trees (mostly peach) in Parker County. The local watermelon industry achieved recognition at the 1904 St. Louis World’s Fair, where twelve watermelons raised in the county took the world prize for weight. By that year there were 3,634 farms in Parker County, and the population had grown to 26,331.”

“Parker County began to evolve in new directions during the 1960s. Interstate Highway 20 was built through the area, helping to encourage thousands of new residents to move in; many of them commuted to Fort Worth to work. Significant production of oil began in the county after 1966, and in 1973 almost 823,000 barrels of crude oil were produced there. Meanwhile the area’s longstanding dairy industry continued to prosper.”

I was the guest of Parker County and Weatherford on January 8, 2011 and returned to rephotograph the courthouse on May 17, 2014.

“The Parker County Courthouse is an eye-catcher. Its tall central tower and four corner pavilions with handsome mansard roofs are a naive and charming version of the French Second Empire style in architecture.” - National Register Narrative 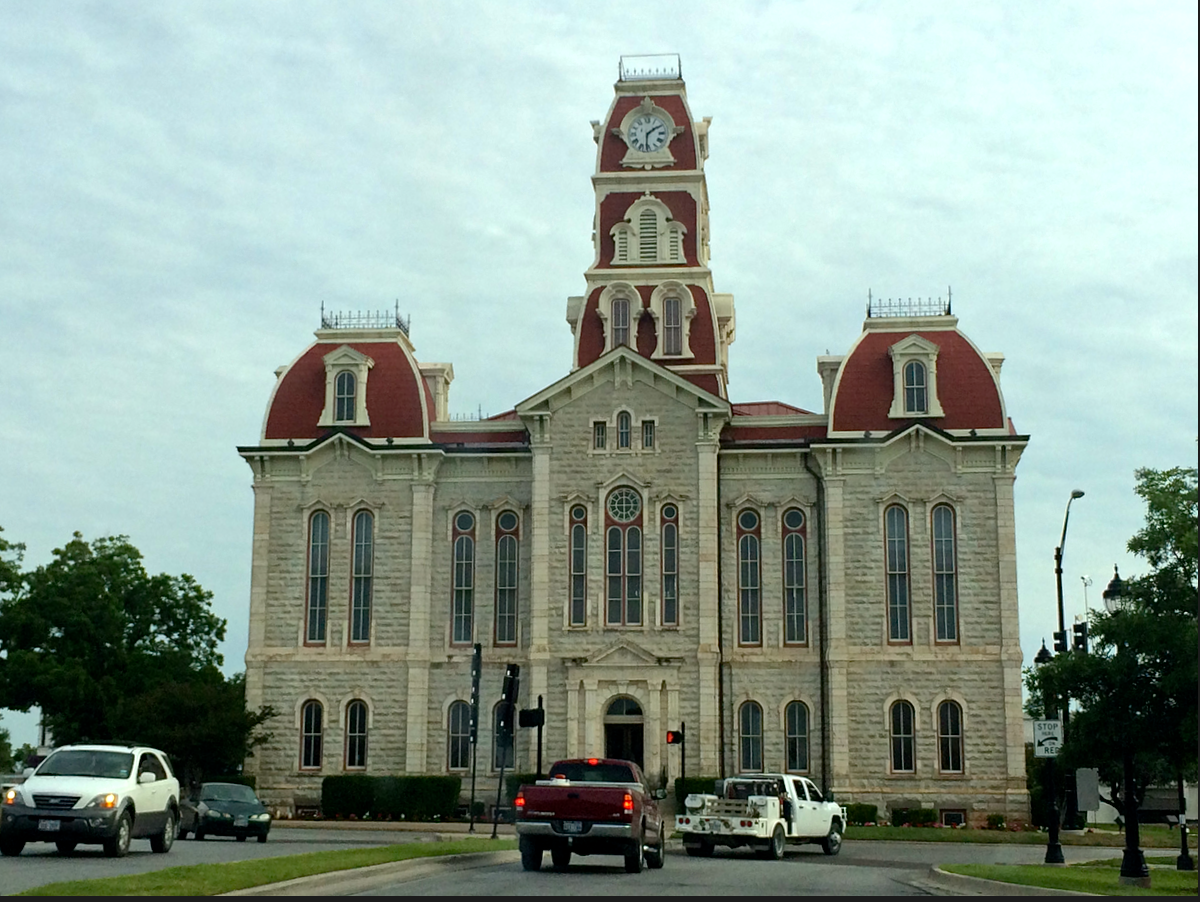 The Parker County Courthouse is an “eye-catcher” indeed. 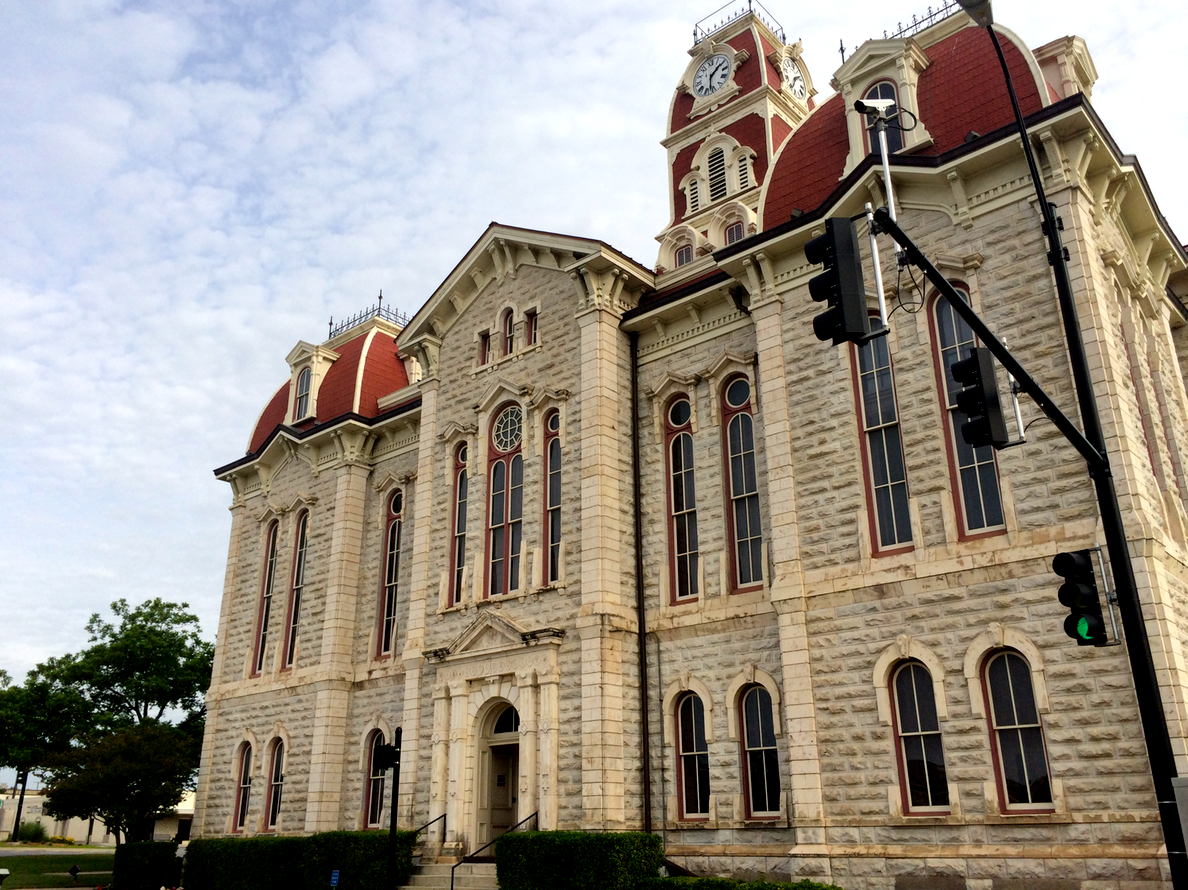 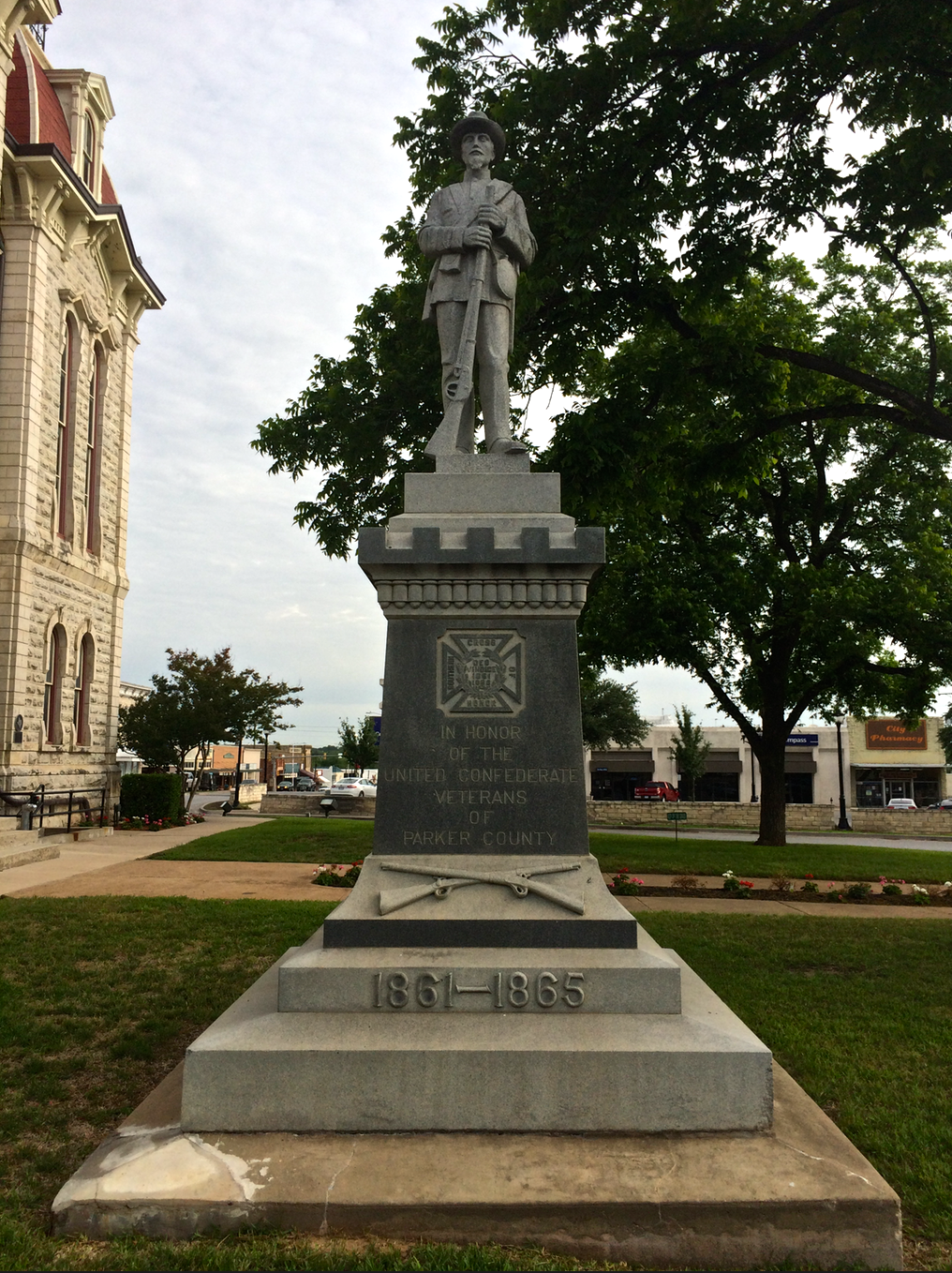 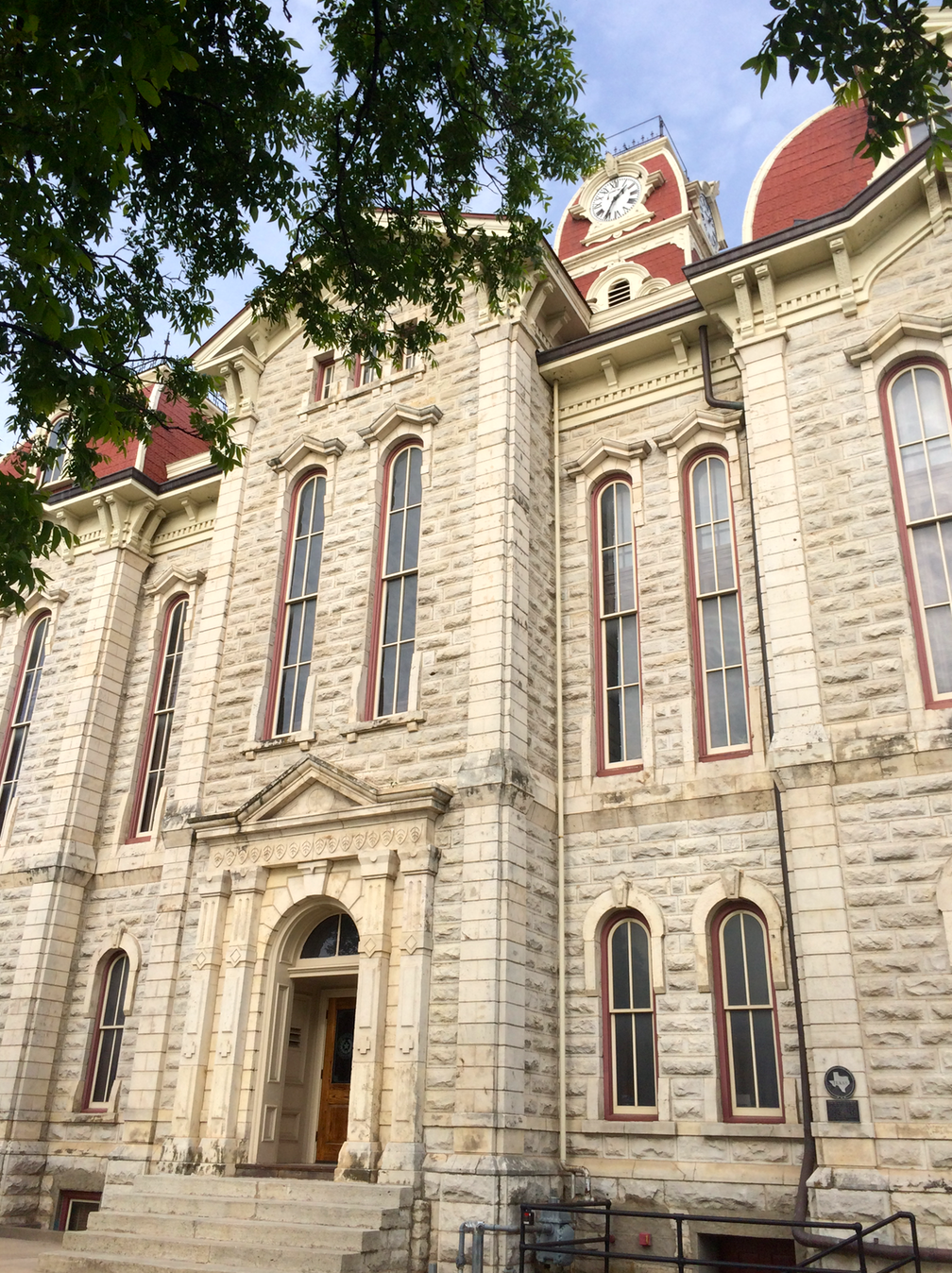 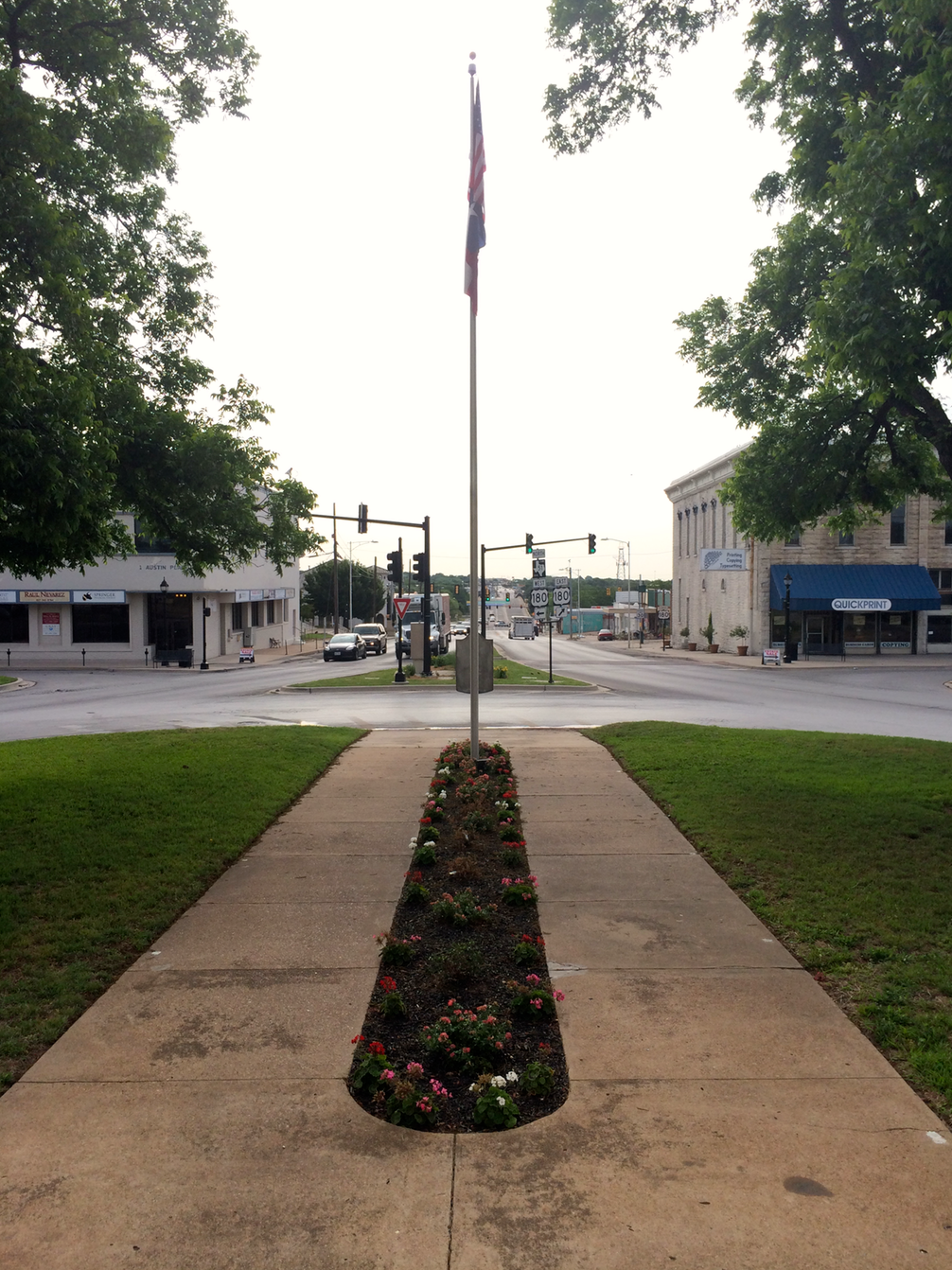 The view from the eastern steps, looking towards Highway 180 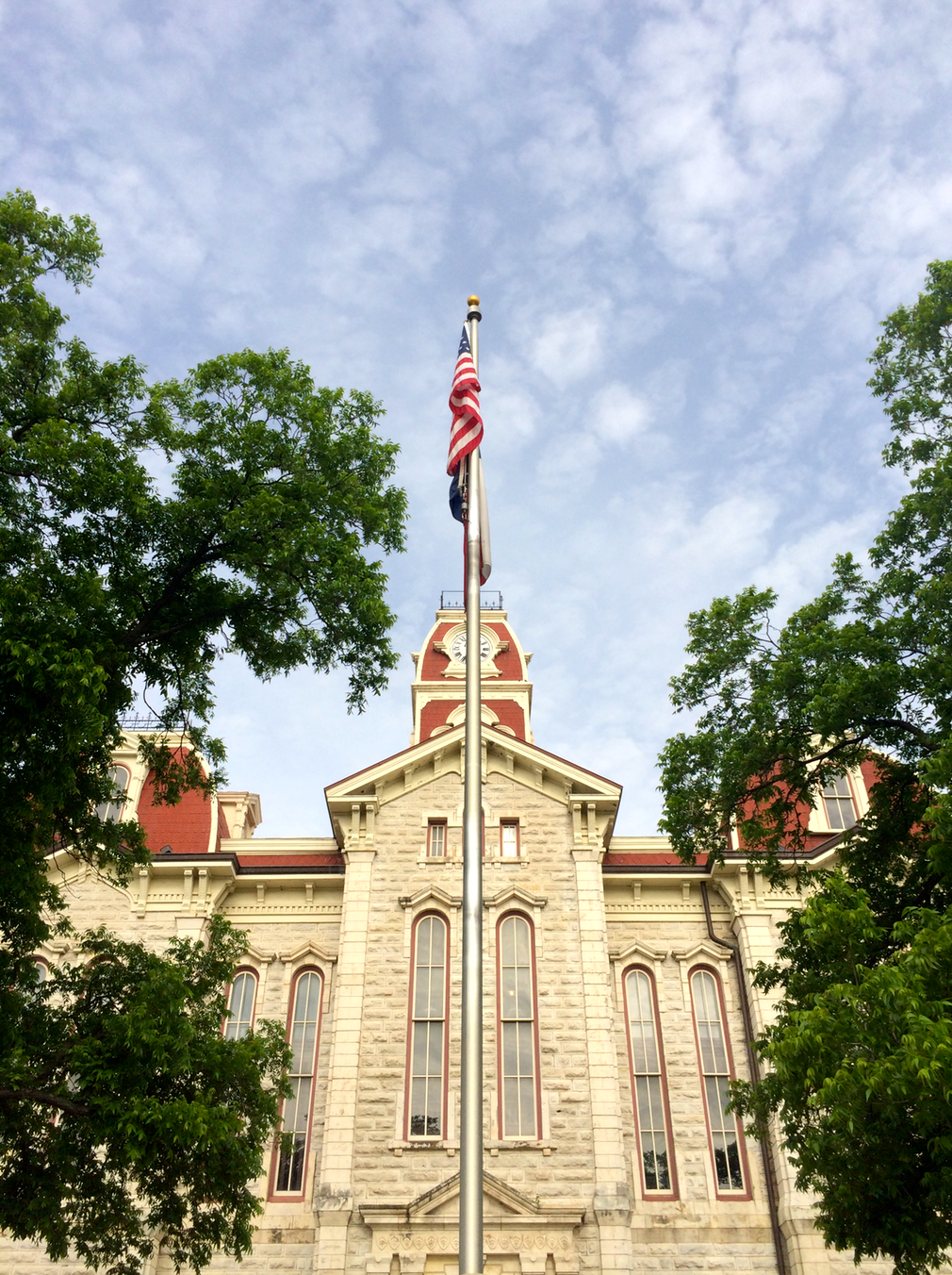 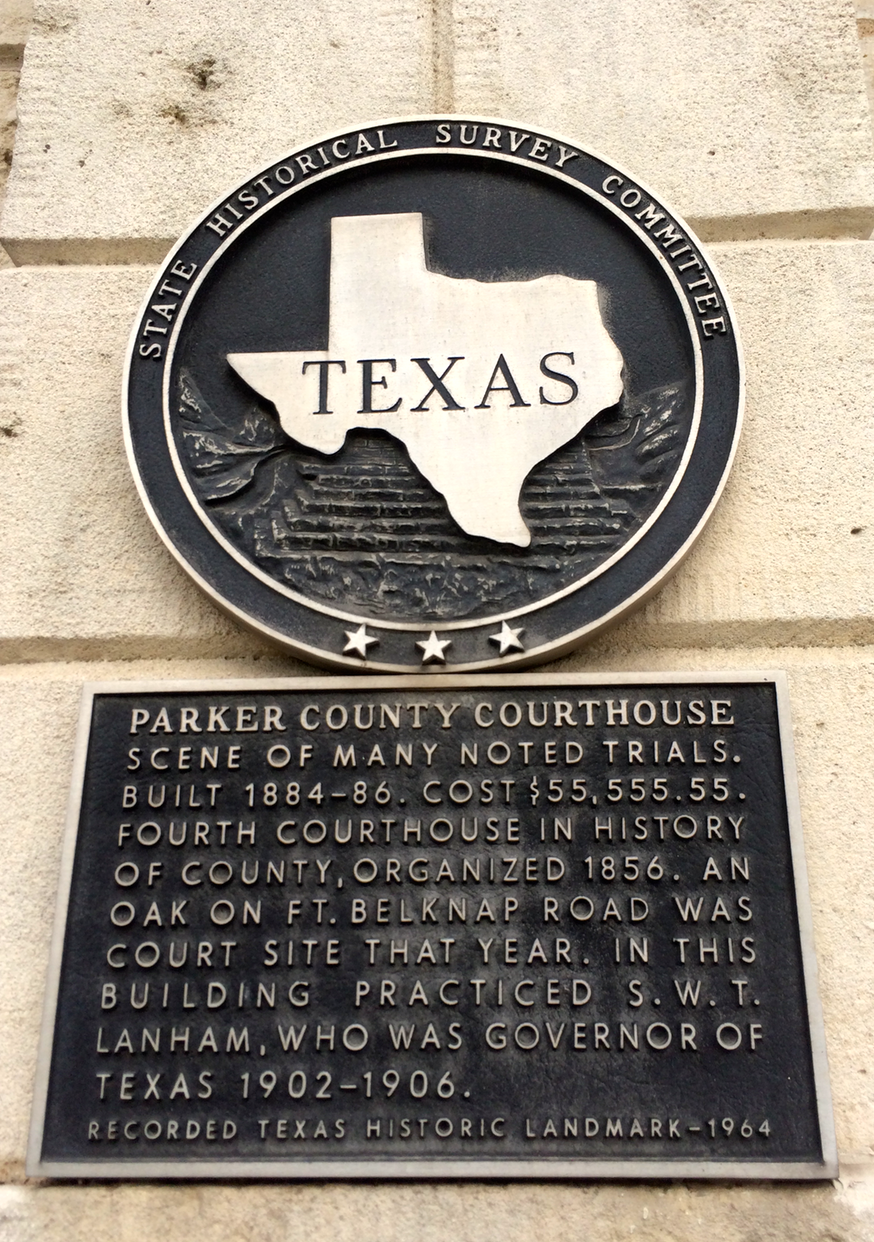 Two identical historical markers can be found on either the western or eastern side of the building. 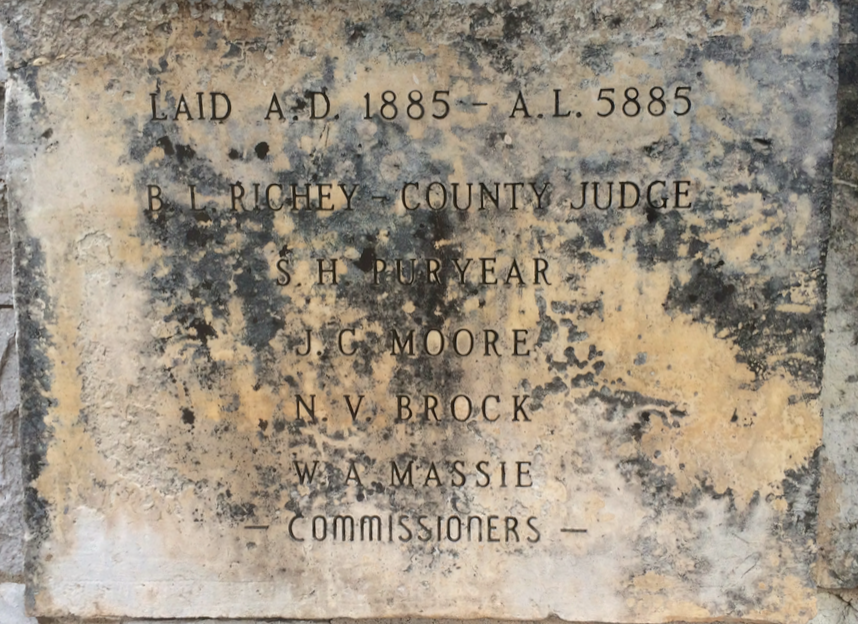 The cornerstone can be found on the northeastern corner of the courthouse. 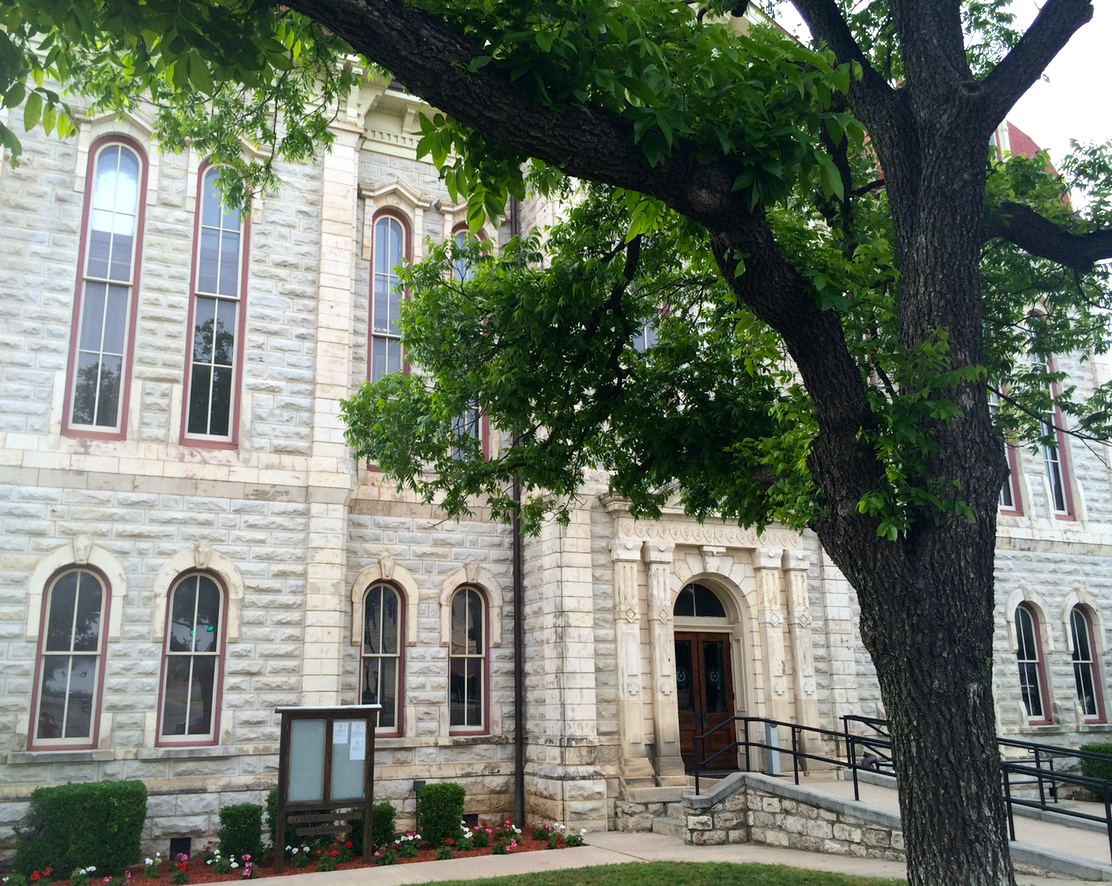 The courthouse’s western side 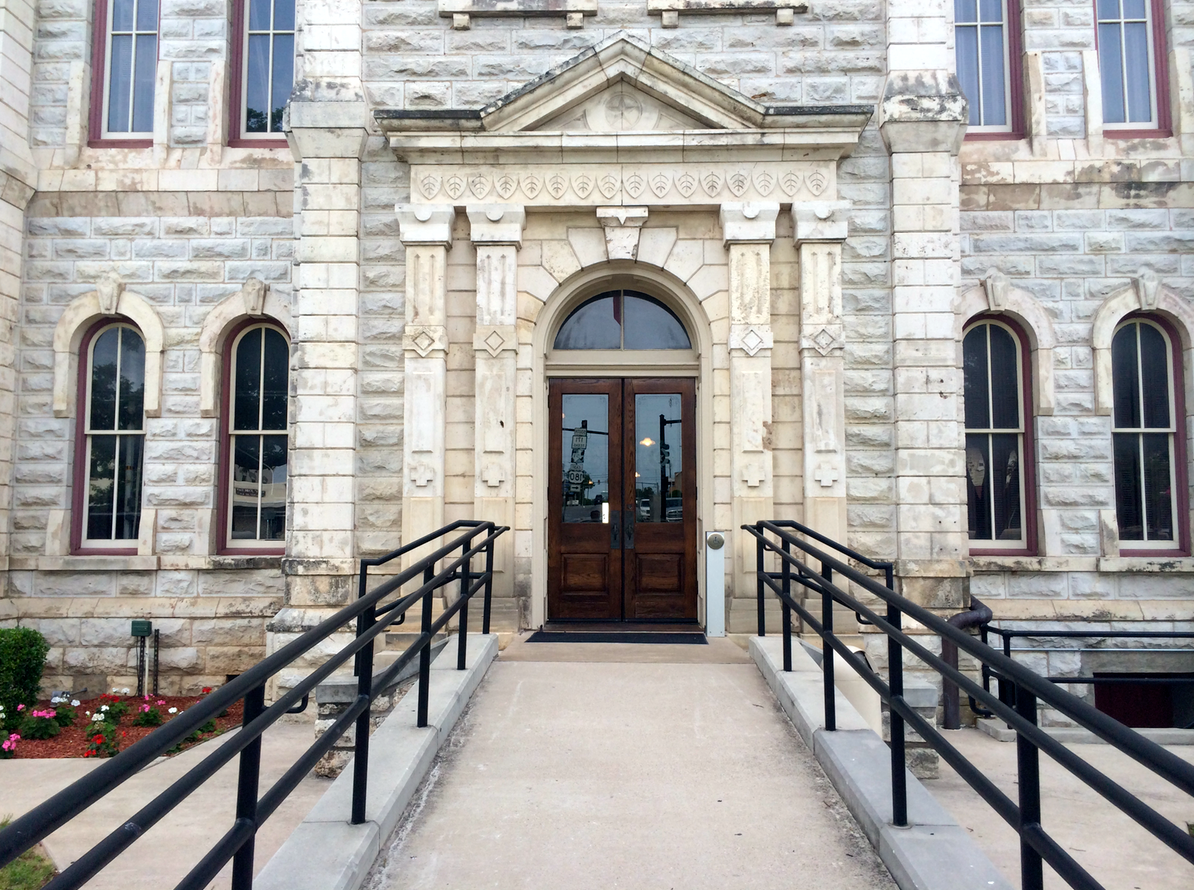 The western entrance is complete with a handicap ramp 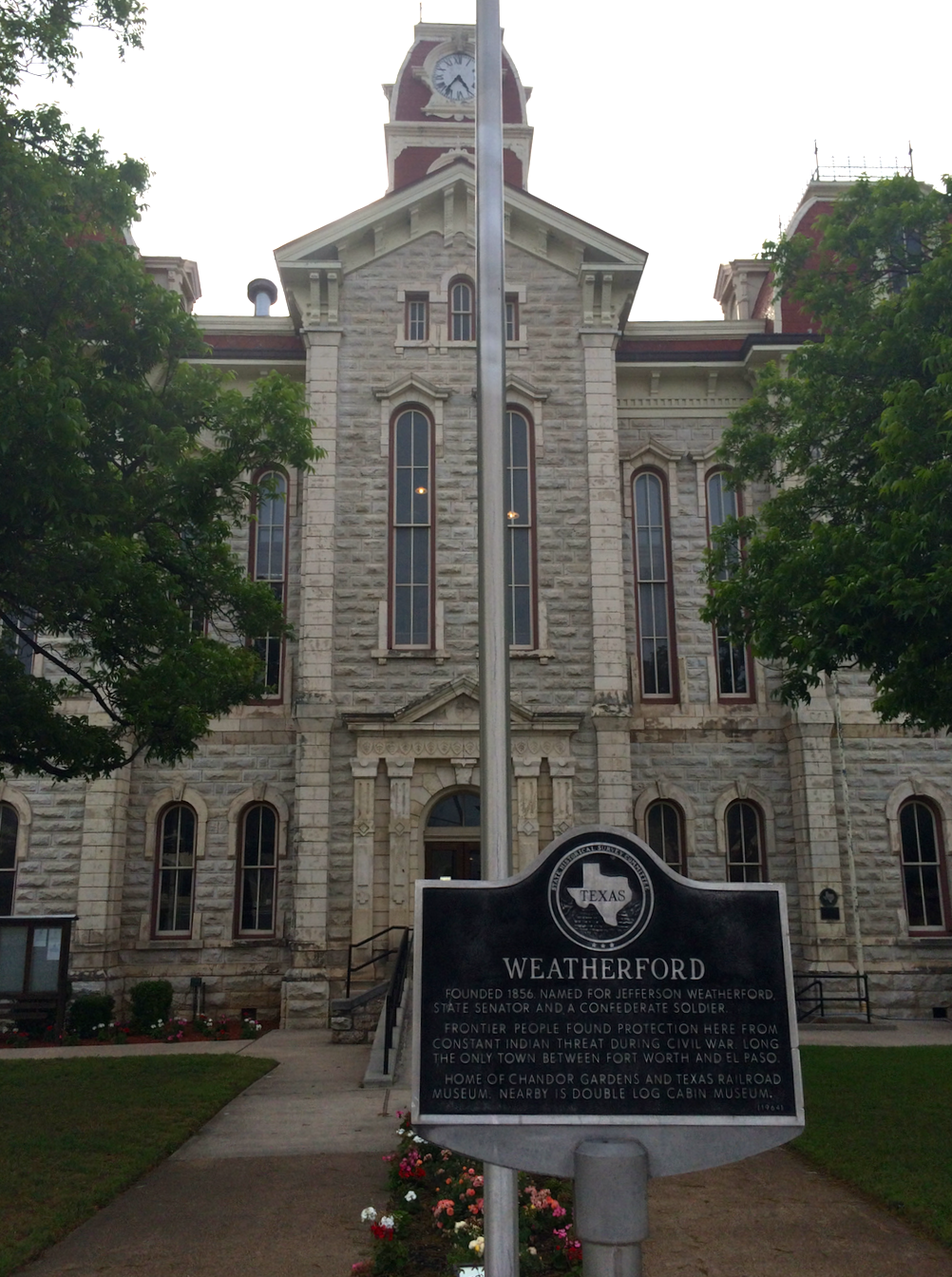 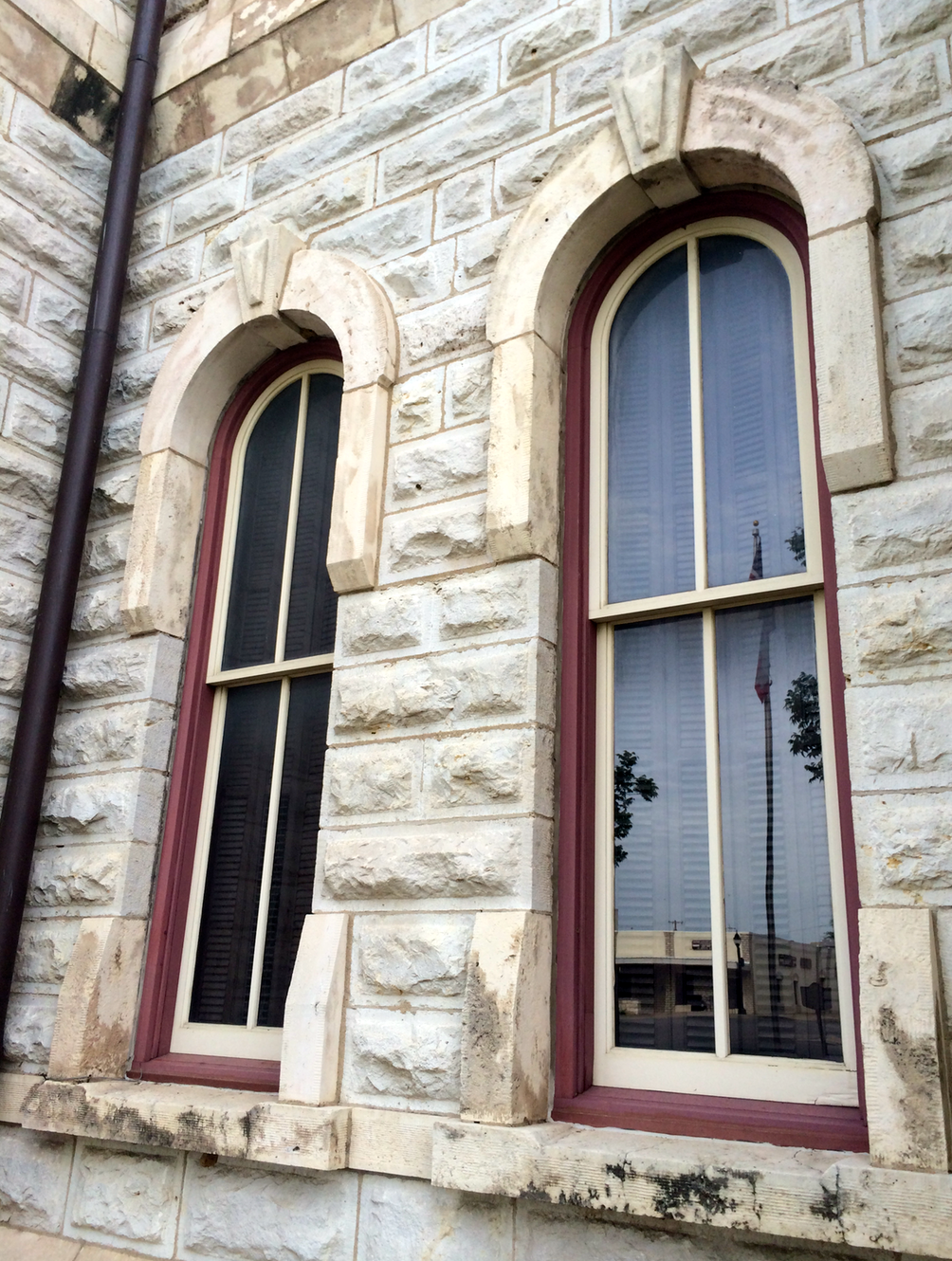 Well carved windows on the western side 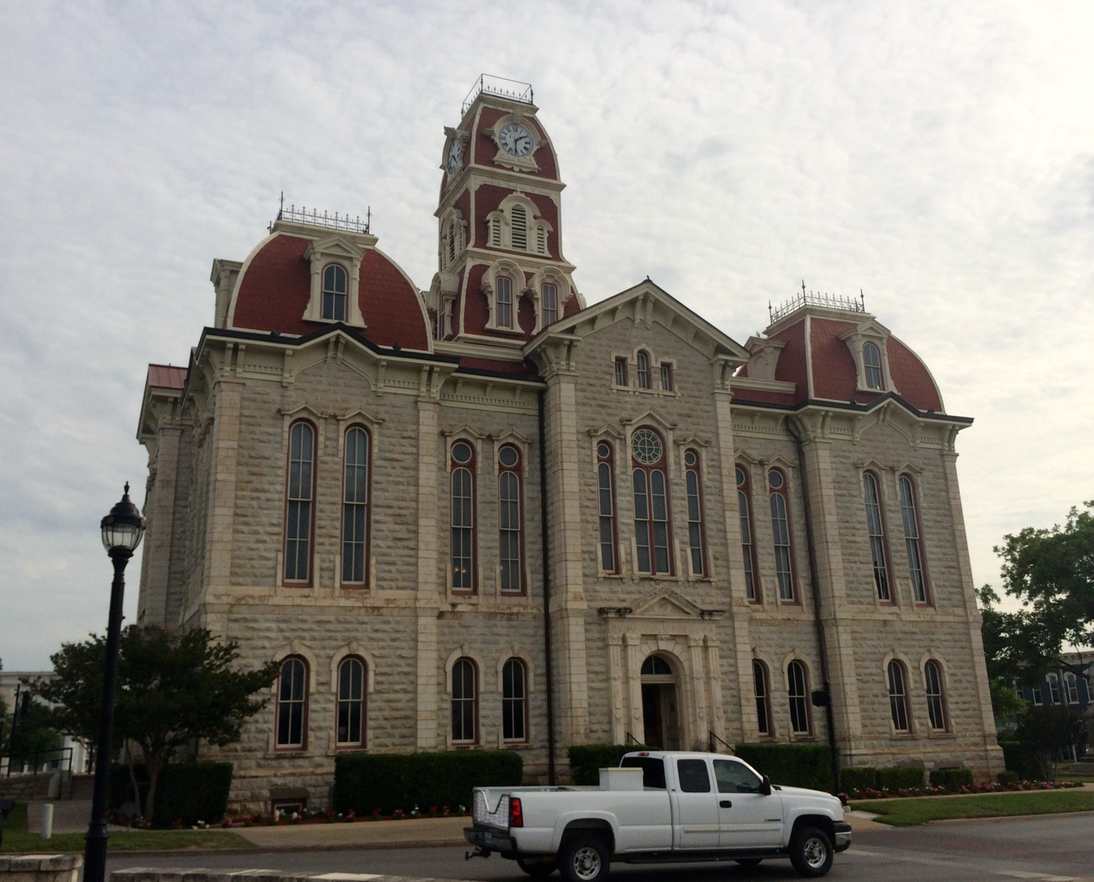 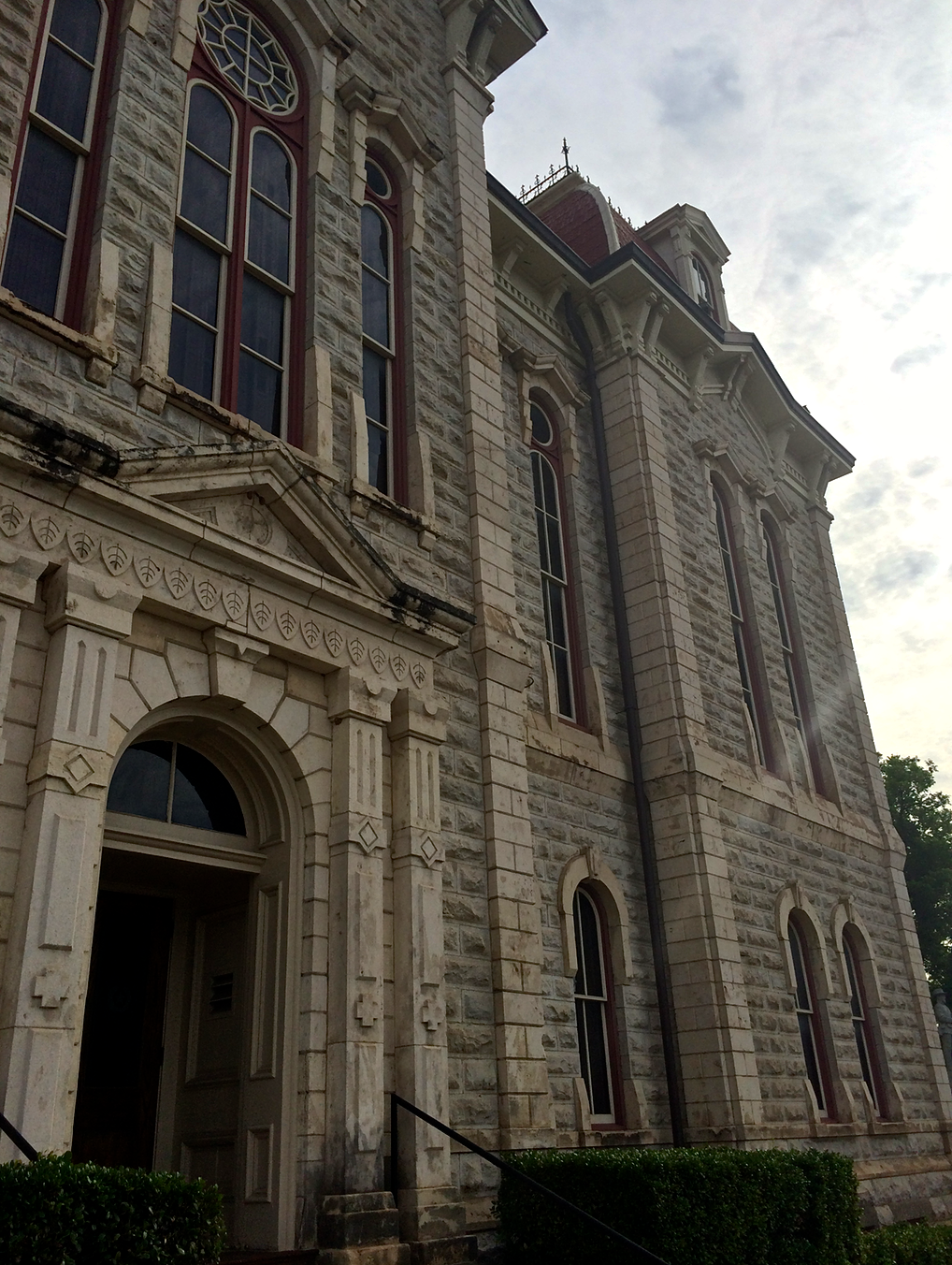 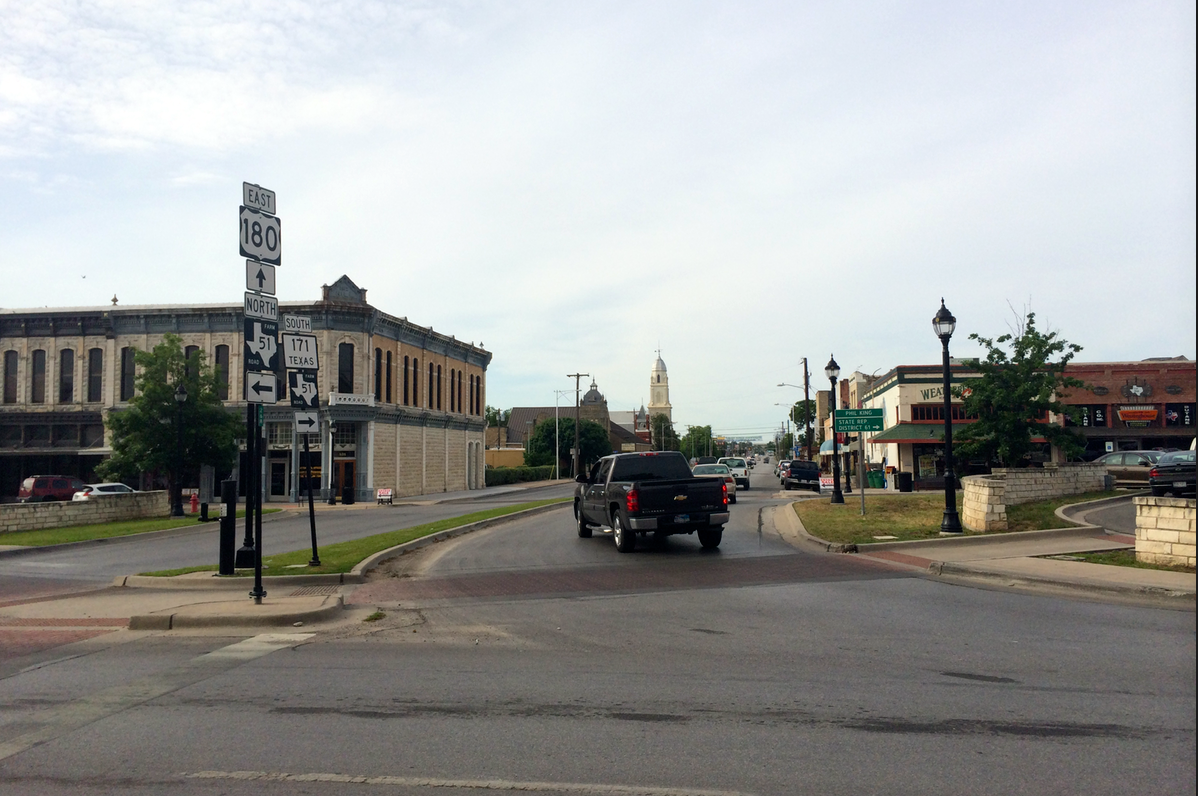 The view from the southern side, looking south towards Highway 51 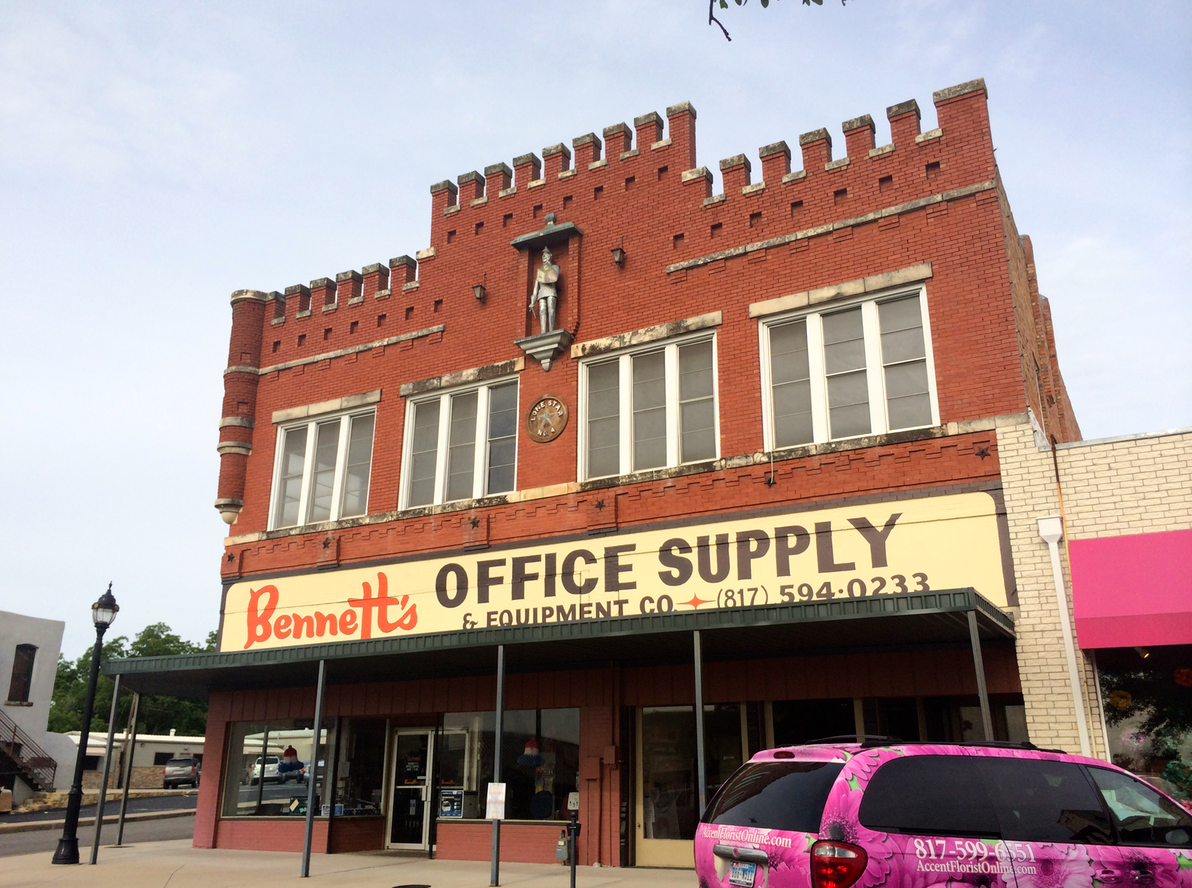 On the Weatherford square, the building that houses Bennett’s Office Supply has a peculiar characteristic. 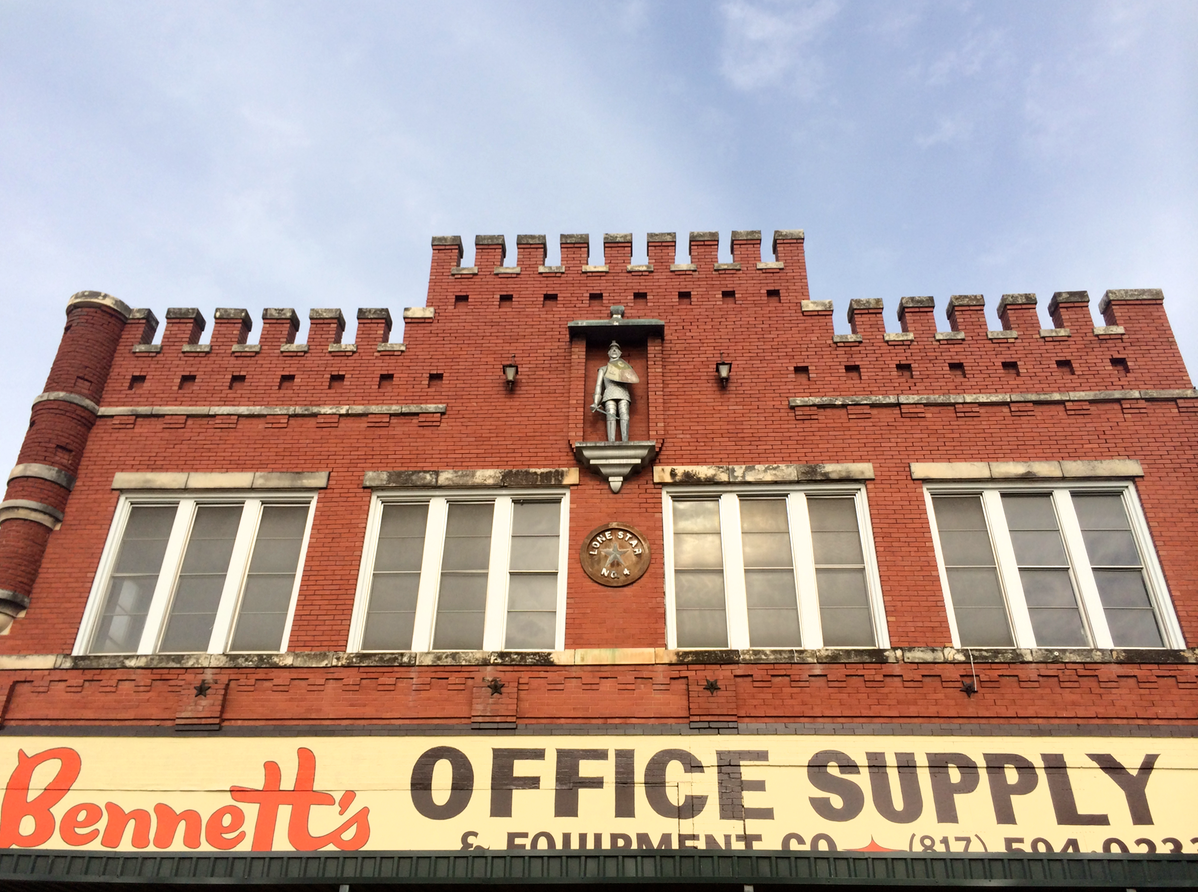 The significance of the knight is not known to me….for now. 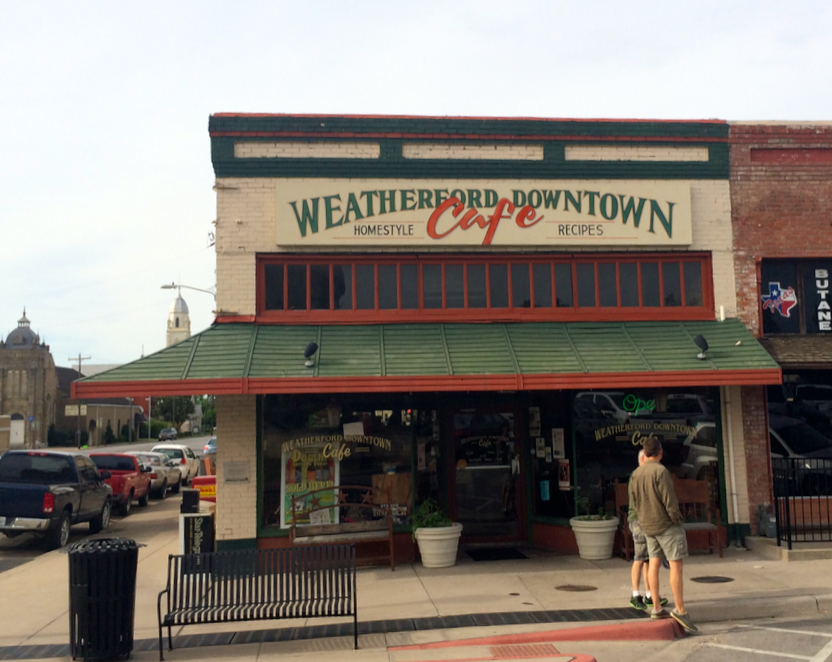 Also on the square is Weatherford Downtown Cafe, a recommendation of mine. 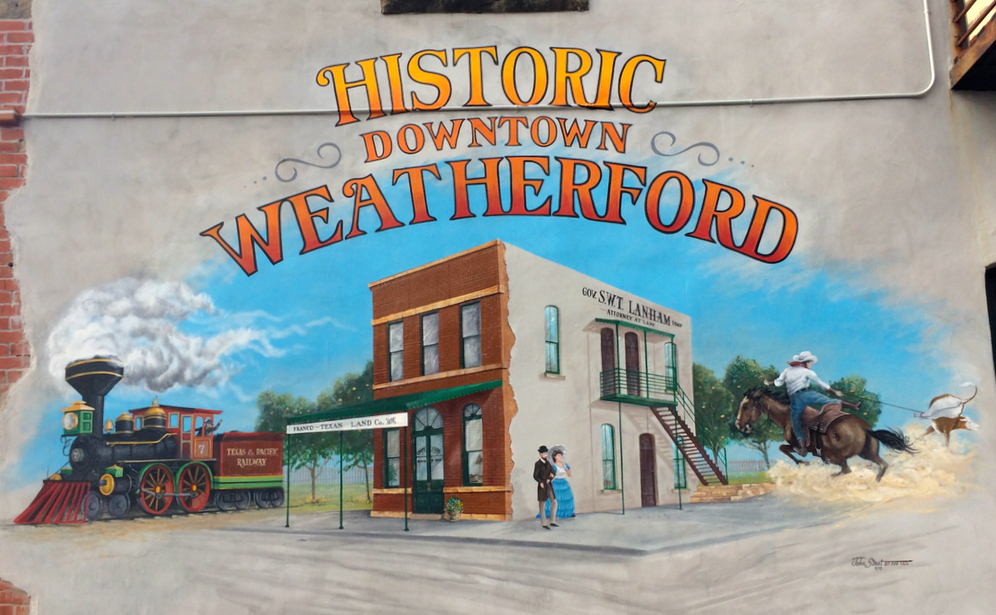 Parker County is known across Texas for its peaches. 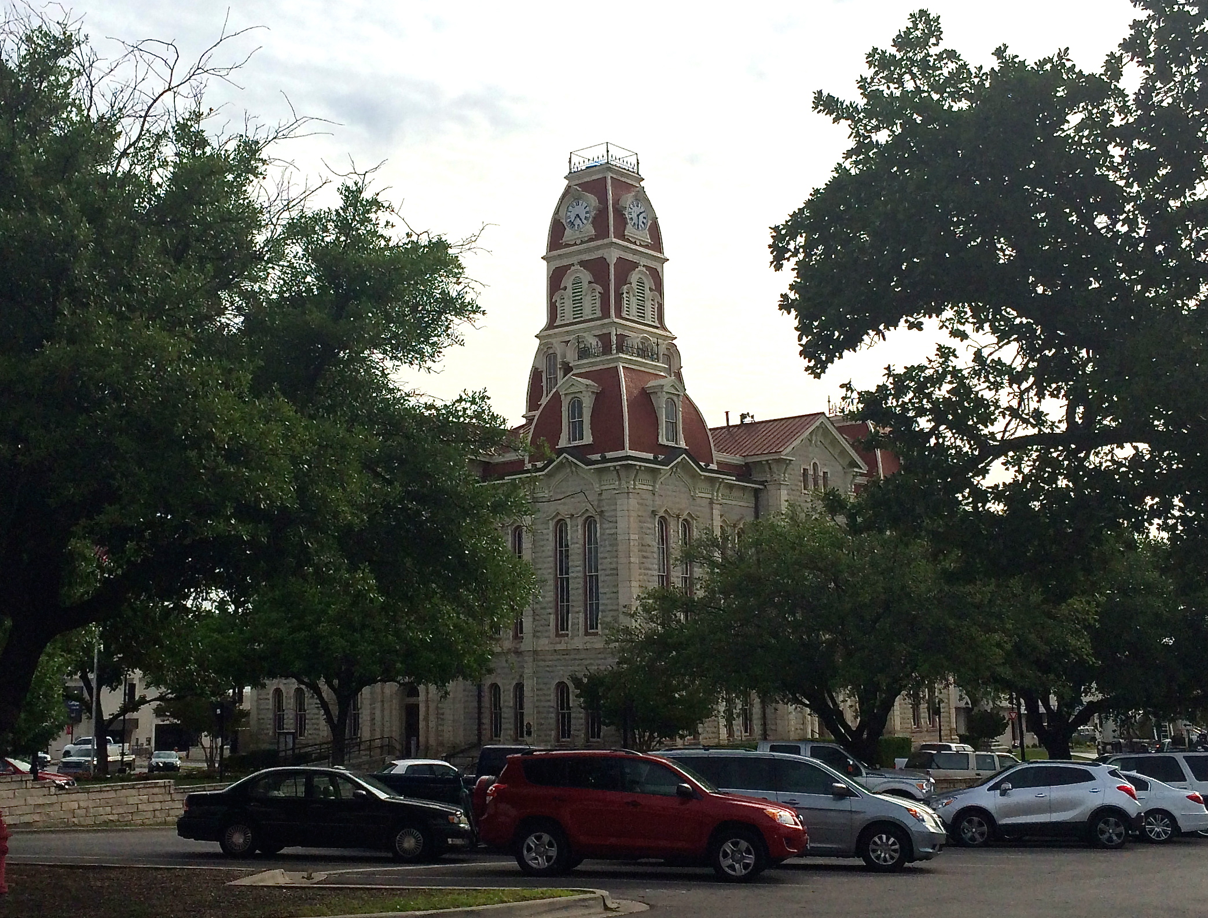 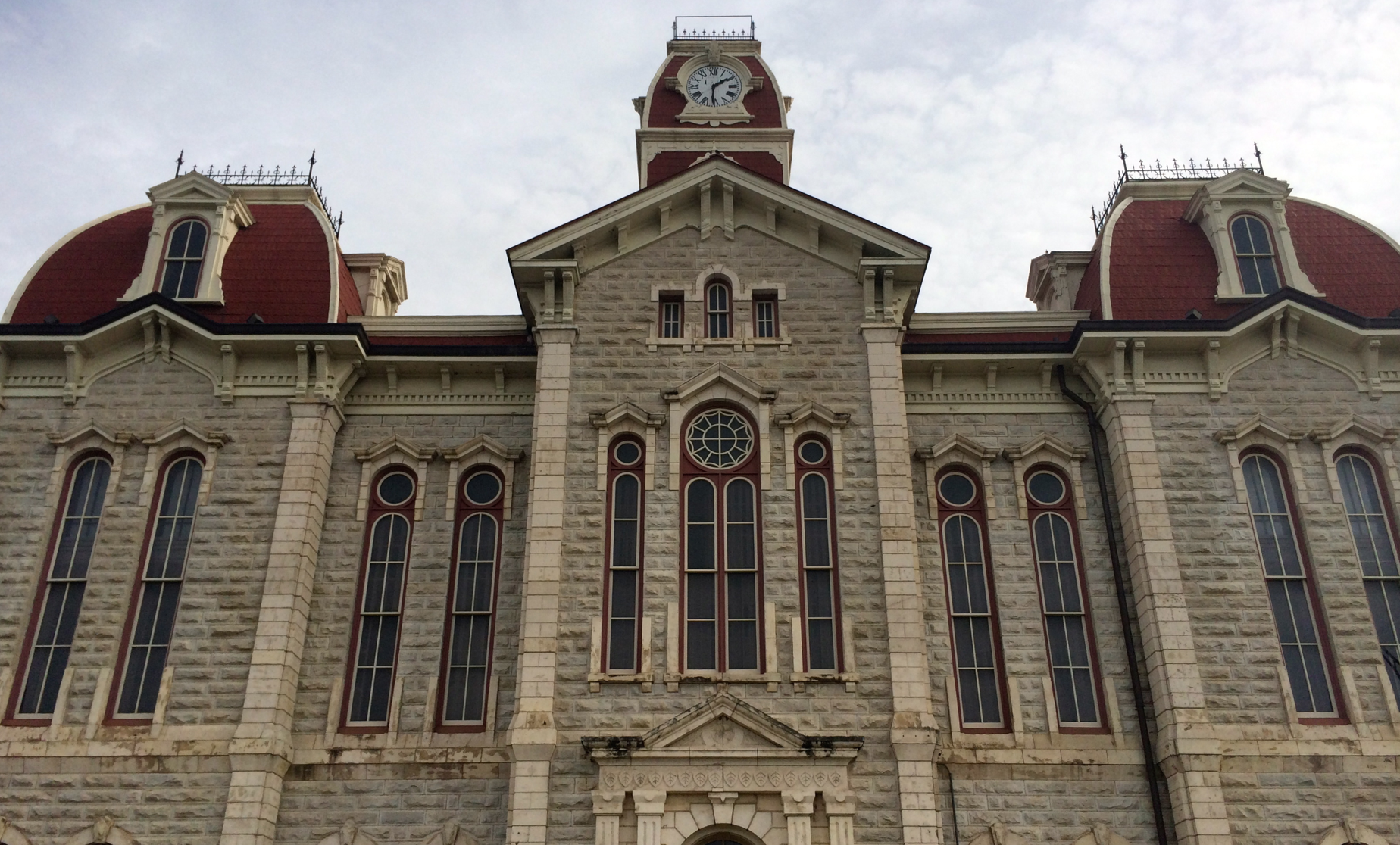 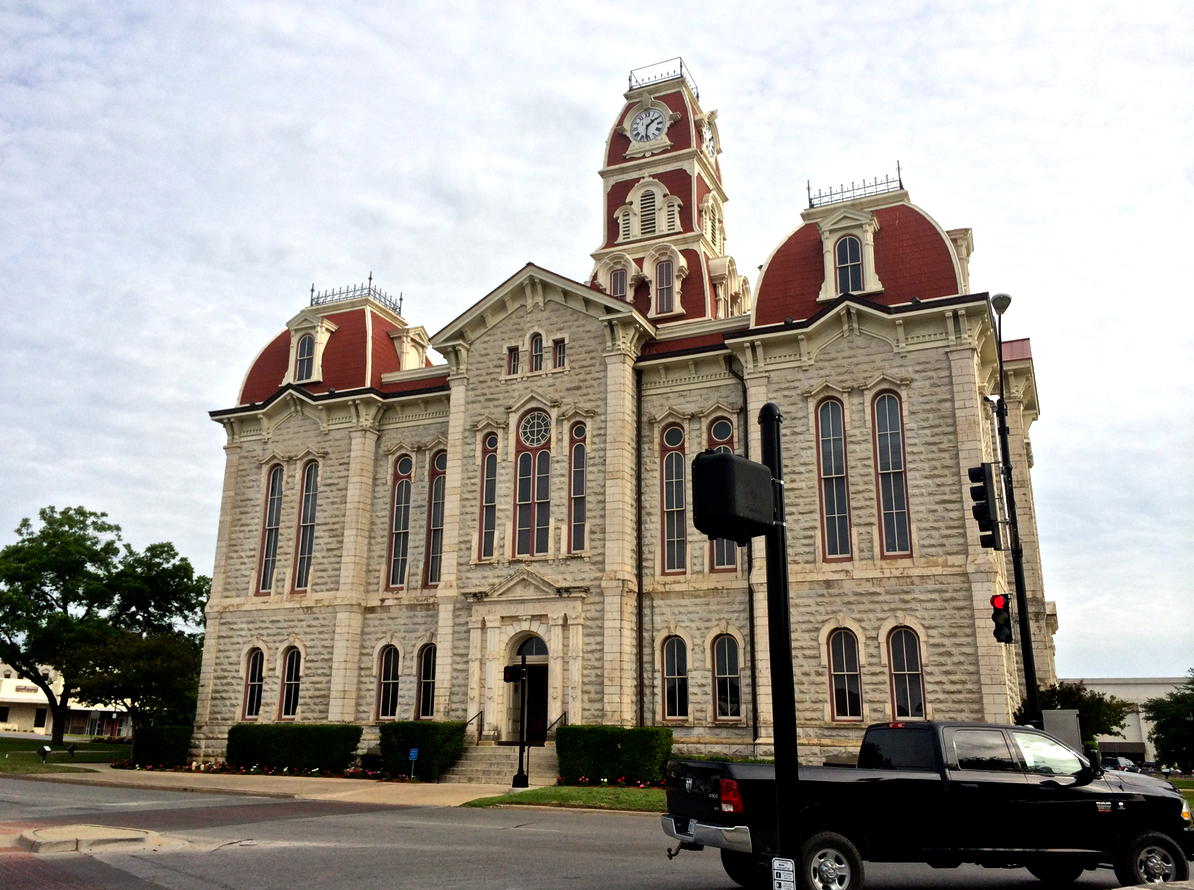 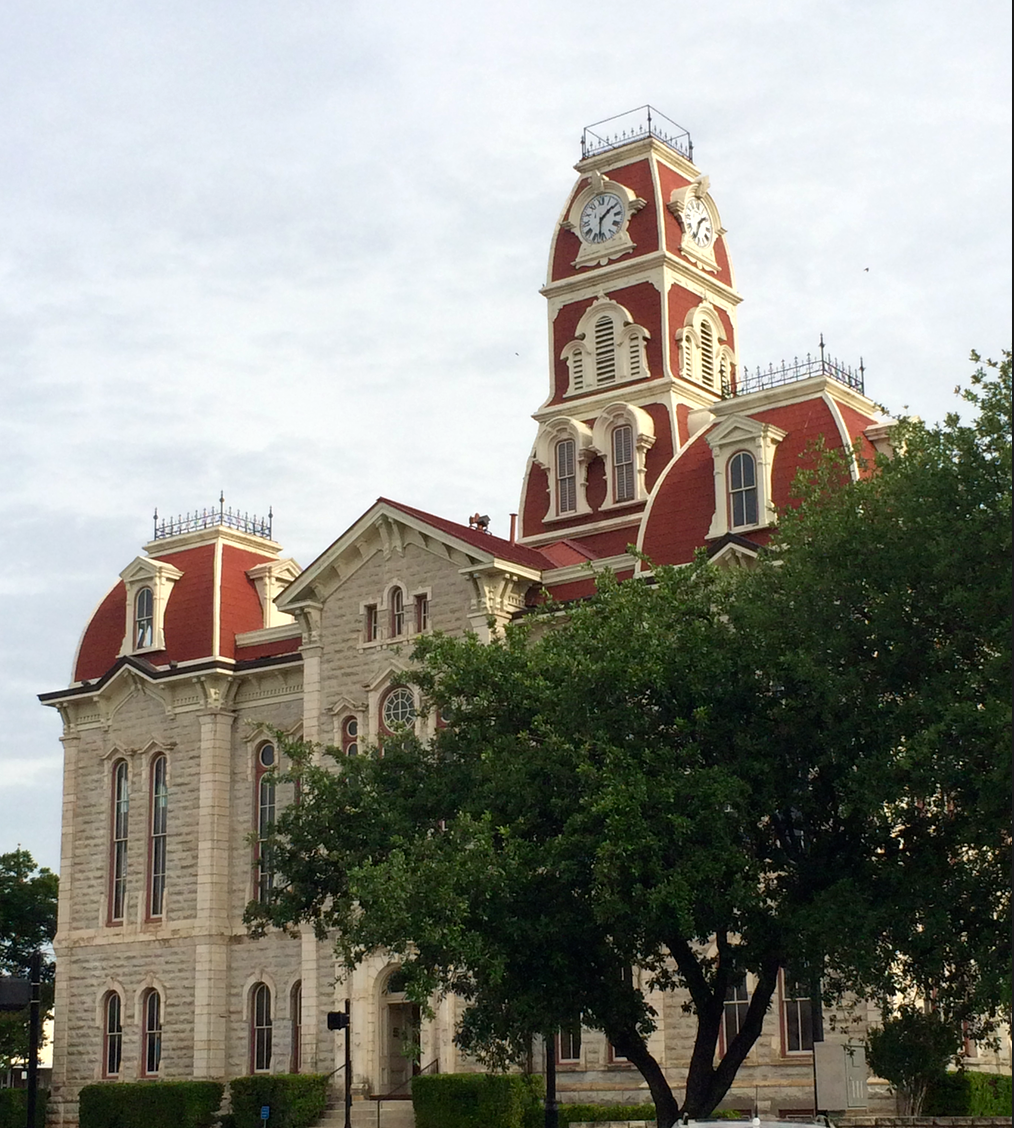 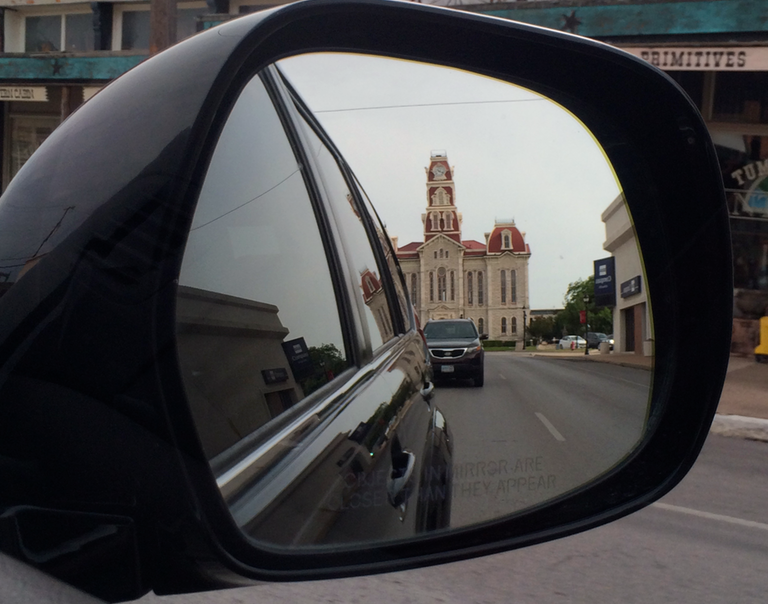