“The county was named for Robert Potter. It comprises 902 square miles of level to rolling terrain, with elevations ranging from 3,000 to 3,800 feet above sea level. Its soils are mainly chocolate and red loams with some sand and clay. The area slopes to the Canadian River, which flows easterly across the northern part of Potter County; Lake Meredith, formed when the Canadian was dammed in 1965, extends about eight miles into the northwestern section of the county.”

“The first known Anglo-American expedition through the area was led by Maj. Stephen H. Long, who followed the Canadian River east to its junction with the Arkansas in August 1820. During the California gold rush, gold seekers passed through the area following trails blazed by Josiah Gregg in 1840 and by Randolph B. Marcy in 1849. Lt. James W. Abert and Lt.Amiel W. Whipple crossed the area during their surveys of the Canadian valley in 1845 and 1853, respectively.”

“In 1876 the Texas legislature formed Potter County from the Bexar District, and ranchers soon found their way into the area.Most of the first Caucasian residents were employees of cattlemen who took their herds into the county. In 1877 David T. Bealsand W. H. Bates established their LX Ranch headquarters on Ranch Creek, near the north bank of the Canadian. The range of George W. Littlefield’s LIT Ranch extended into the western portion of the county. In 1880 the census found twenty-eight people, two of whom were black, living on the three ranches that had been established in the county by that time.”

“In 1881 Henry B. Sanborn established the Frying Pan Ranch, with headquarters at Tecovas Springs. Warren W. Wetzel, the ranch bookkeeper and later Amarillo’s first mayor, resided at the adobe headquarters. His wife Katherine was for nearly six years the only woman in the county.” 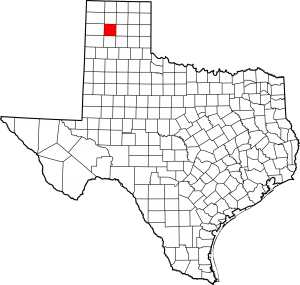 “Settlement of Potter County increased dramatically with the construction of the Fort Worth and Denver City Railway across the Panhandle in 1887. A construction camp grew overnight into a tent and buffalo-hut settlement known as Ragtown. When Oldham County officials ordered an election held on August 30 for the purpose of organizing Potter County, several townsites vied to be county seat. William B. Plemons, the first county judge, had a prospective townsite near the head of Amarillo Creek. Two miles southeast was J. T. Berry’s townsite of Oneida, in which Plemons soon merged his interest. Frank Lester, backed by Henry Sanborn, dubbed a third site Plains City, while Jesse Jenkins, a Tascosa saloon owner, promoted Ragtown under a new name, Odessa. To attract the support of the cowhands of the LX Ranch, who constituted the majority of the county’s qualified voters, Berry promised each of them a business lot and residence lot in his town. The election returns favored Berry’s townsite, which was renamed Amarillo.”

“Partly because of the efforts of Henry Sanborn, who had been establishing another townsite east of “Old Town” Amarillo, and partly because of flood dangers, most of the town was moved to a new, higher site by 1890. By that time cattle ranching had become firmly established in the area and dominated Potter County’s economy and its culture. Twenty ranches, encompassing more than 511,000 acres, had been established in the county by 1890, and more than 44,000 cattle, but no sheep, were reported in the county that year. By 1900 there were seventy-nine ranches in the county, and the population had increased to 1,820.”

“The county’s economy grew and diversified rapidly during the late 1890s and early 1900s as new railroads built into the area. In 1899 the Santa Fe line established a large divisional office in the town and built an eight-stall engine house, a blacksmith shop, and a machine shop there. By 1904 the Southern Kansas, the Pecos and Northern Texas, and the Choctaw, Oklahoma and Texas railroads had also built lines through the county.”

“The subdivision of ranchlands in Potter County began in earnest after 1910, encouraged by the Santa Fe Railroad, which established agricultural demonstration centers in the area, hired agricultural agents to work with local farmers, and ran excursion trains from Chicago and elsewhere into Amarillo. By 1920 more than 16,000 acres in the county was planted in wheat, the county’s most important crop, and another 7,400 was devoted to sorghum; by 1930 almost 24,500 acres was planted in wheat, and about 3,200 acres in sorghum.”

“As thousands of workers and others looking for opportunity flooded into the area, Amarillo’s population jumped from about 15,500 in 1920 to 43,122 in 1930. New towns such as Bushland, Cliffside, Ady, Soncy, Pullman, and St. Francis sprouted up along the railroads. Largely because of [a] gas and oil boom, but also because of the expansion of farming in the area, the population of Potter County rose to 16,710 by 1920 and 46,080 by 1930.”

“The economy declined during the Great Depression of the 1930s, however, as a number of oil companies were forced out of business. The area’s farmers were particularly afflicted by the droughts and dust storms associated with the Dust Bowl. Cropland harvested in the county declined from 42,546 acres in 1930 to 38,037 acres by 1940, when only 302 farms and ranches remained there. Amarillo became the regional center for federal New Deal programs, however, which provided work and sustenance for many families; the Work Projects Administration, for example, helped to fund improvements of Amarillo streets and sewerage.”

“The establishment of Amarillo Air Force Base in 1951, combined with the continuing development of Panhandle mineral resources, helped to spur further growth, as Amarillo became one of the fastest-growing cities in the United States during the 1950s. Despite farm consolidations, the county’s population rose to 115,580 by 1960. The closing of the air force base in 1968 was a severe blow to the local economy, however, and by 1970 the county’s population had dropped to 90,511.”

“Large cattle ranches occupy the greater portion of the county and in the 1980s accounted for 80 percent of the agricultural income. There are more than 20,000 acres of irrigated land in Potter County, mainly in the southern sections. In 1982, 304,092 bushels of wheat and 269,555 bushels of sorghum were harvested there. Dairy products and poultry production also contribute to the farm income. By 1982 the county had 178 farms, 163 manufacturing plants, and 872 service industries.” 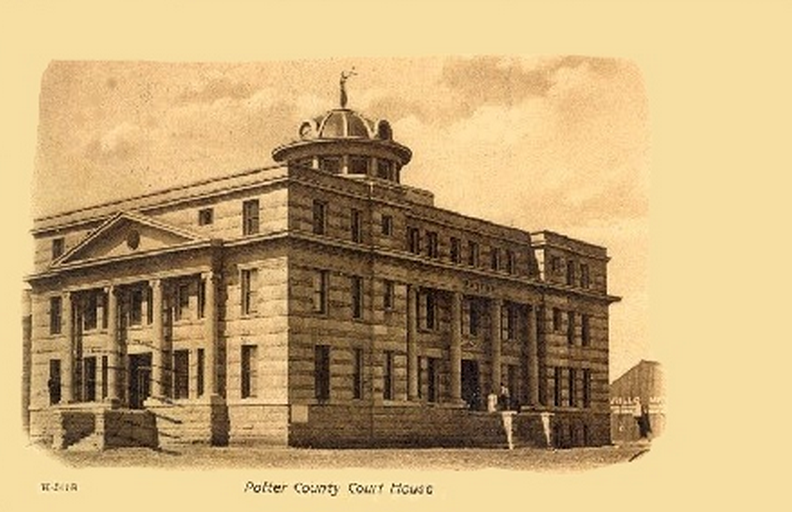 A Classical Revival building constructed by J.J. Holt & J.M. Stansberry that became another one of James Flanders’ great designs to meet its end at the county’s request. While it received an addition designed by W.M. Rice in 1915, it was ultimately razed in 1932.

This soaring, eight-story Moderne creation was designed by the firm Townes, Lightfoot, and Funk with the Page Brothers’s supervision. The contractor was Charles S. Lambie & Co.

The courthouse is one of the handful of skyscrapers that graces Downtown Amarillo. 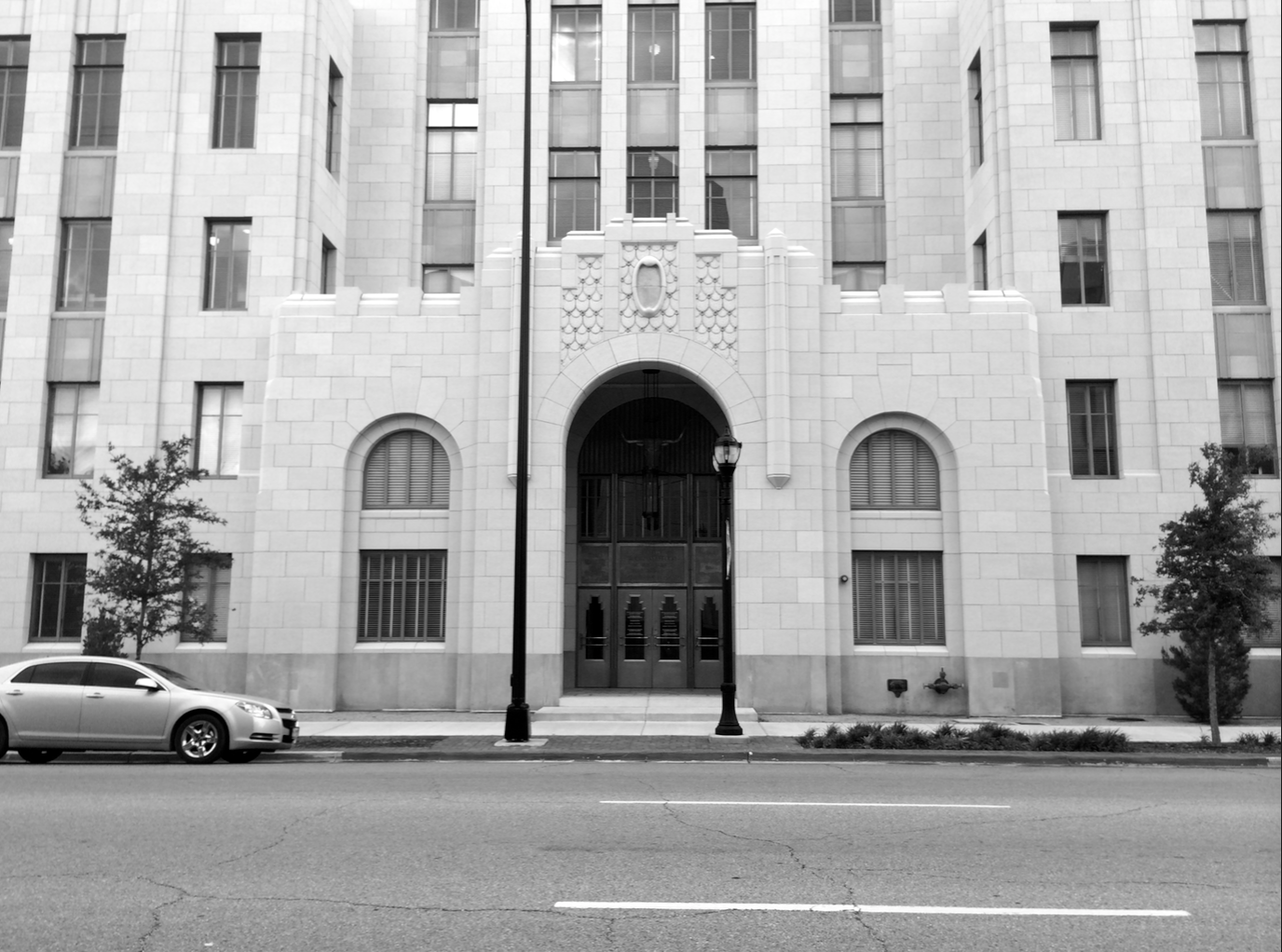 The eastern entrance on Fillmore Street

“To the early settlers of this county, this building is respectfully dedicated” 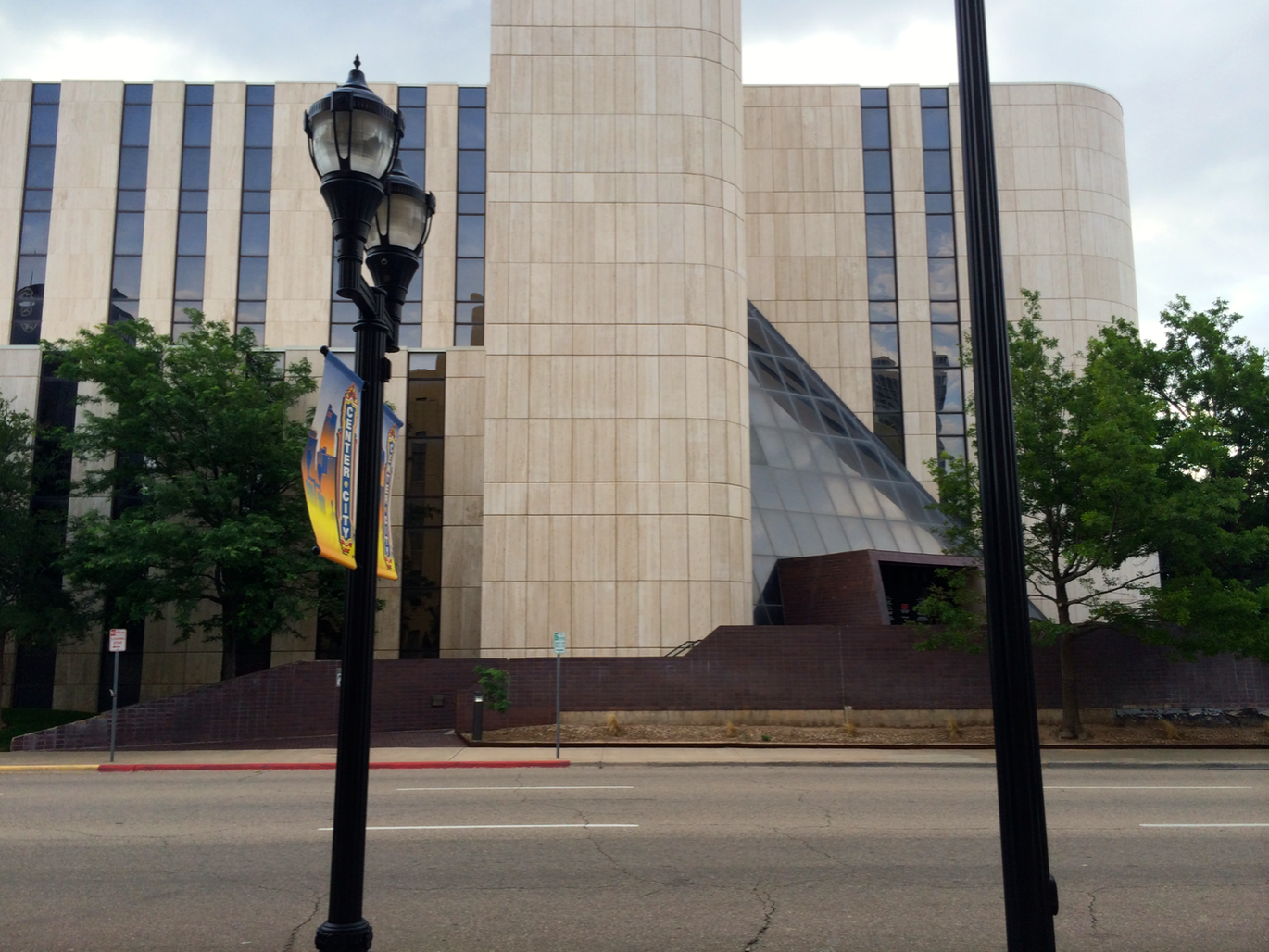 Potter County Courts Building as seen from the eastern entrance 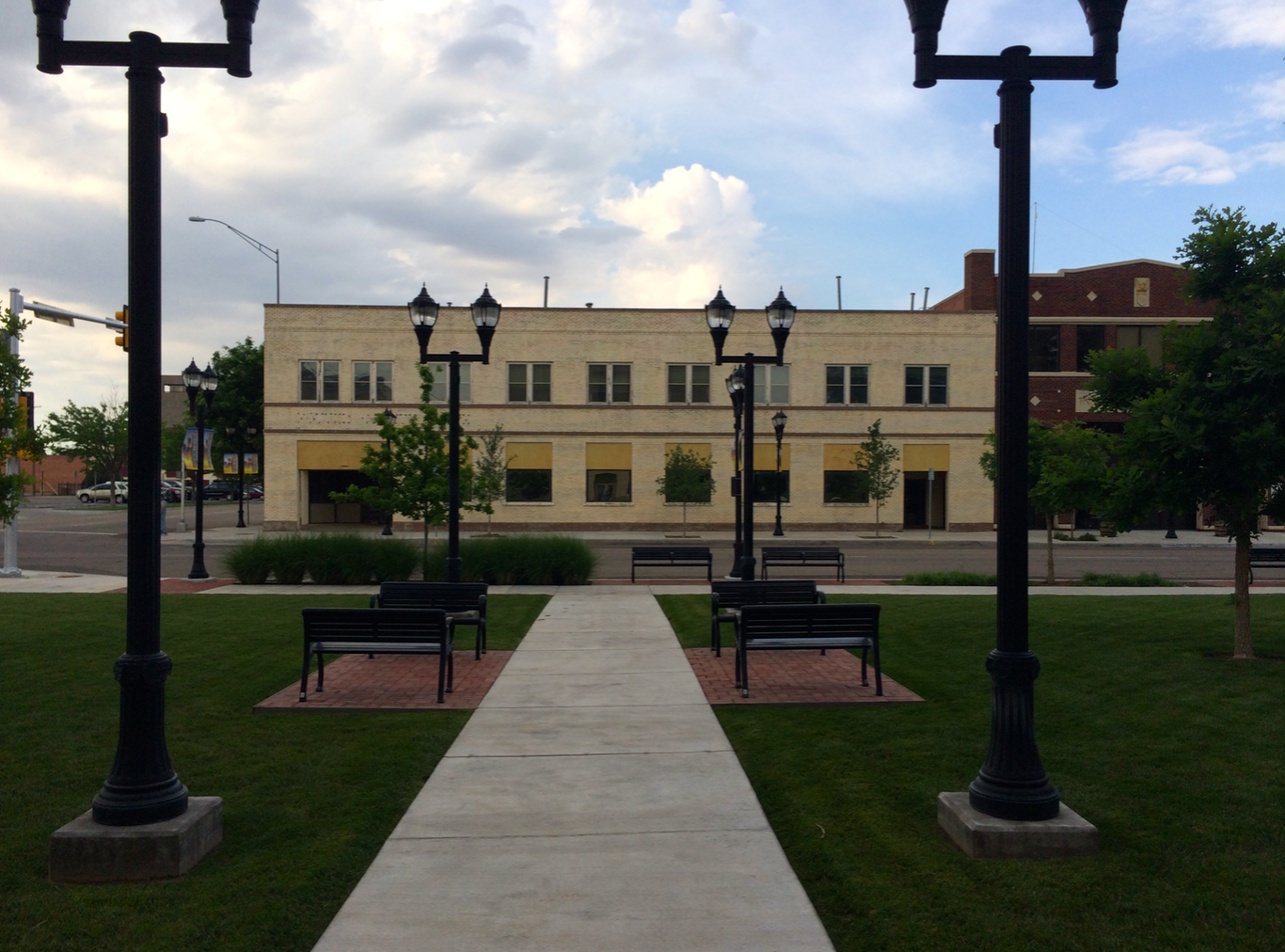 6th Avenue as seen from the southern entrance 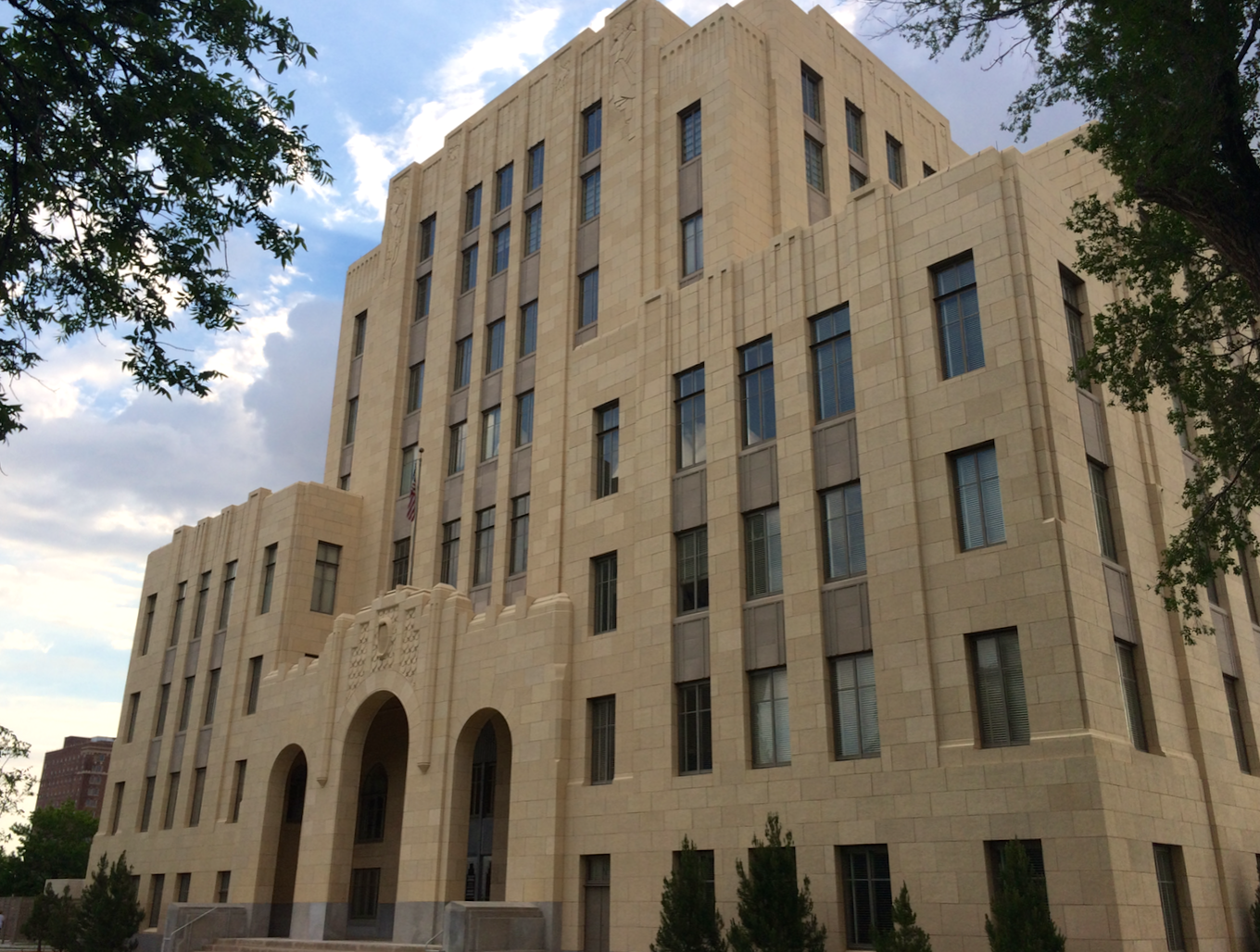 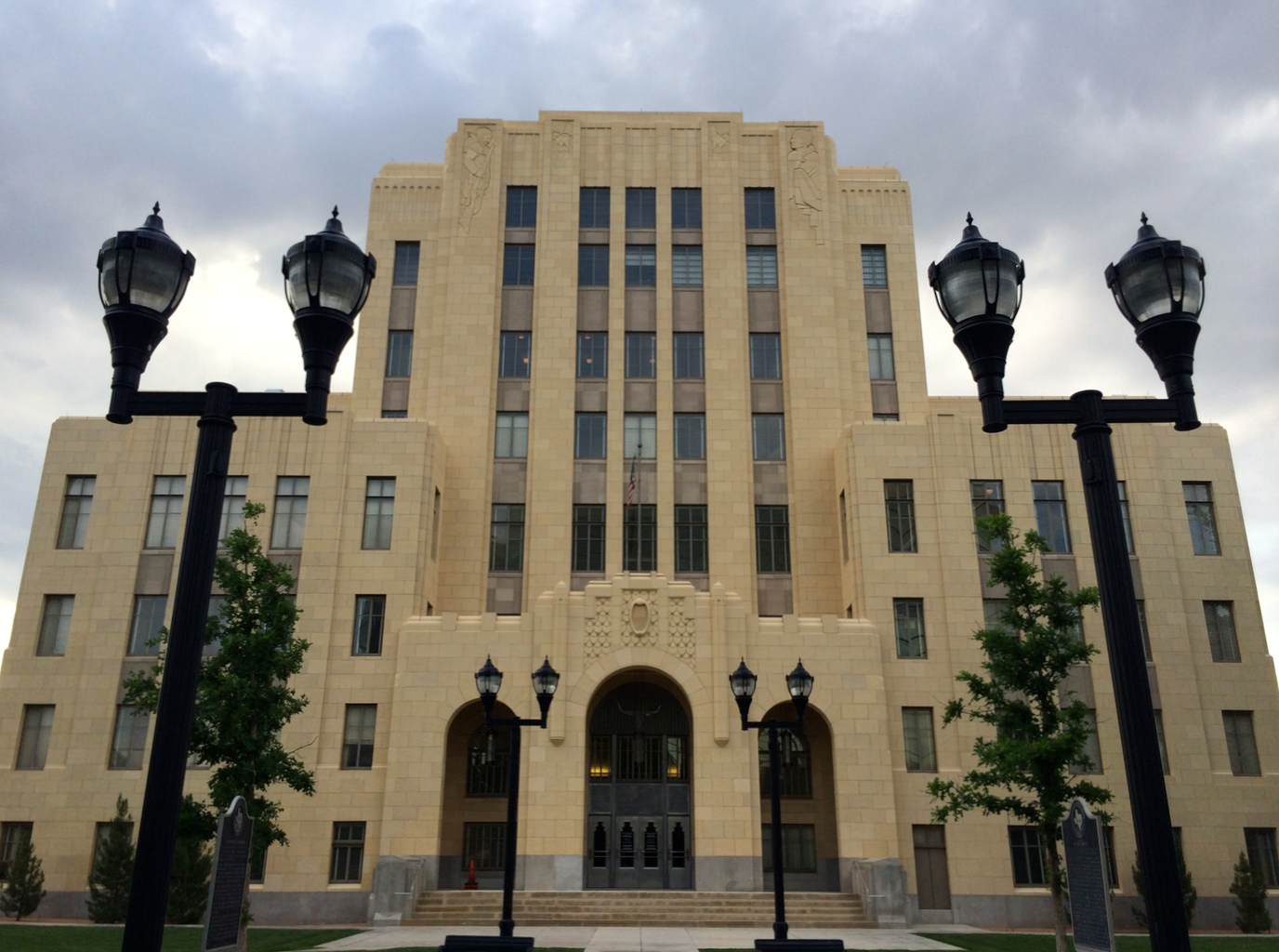 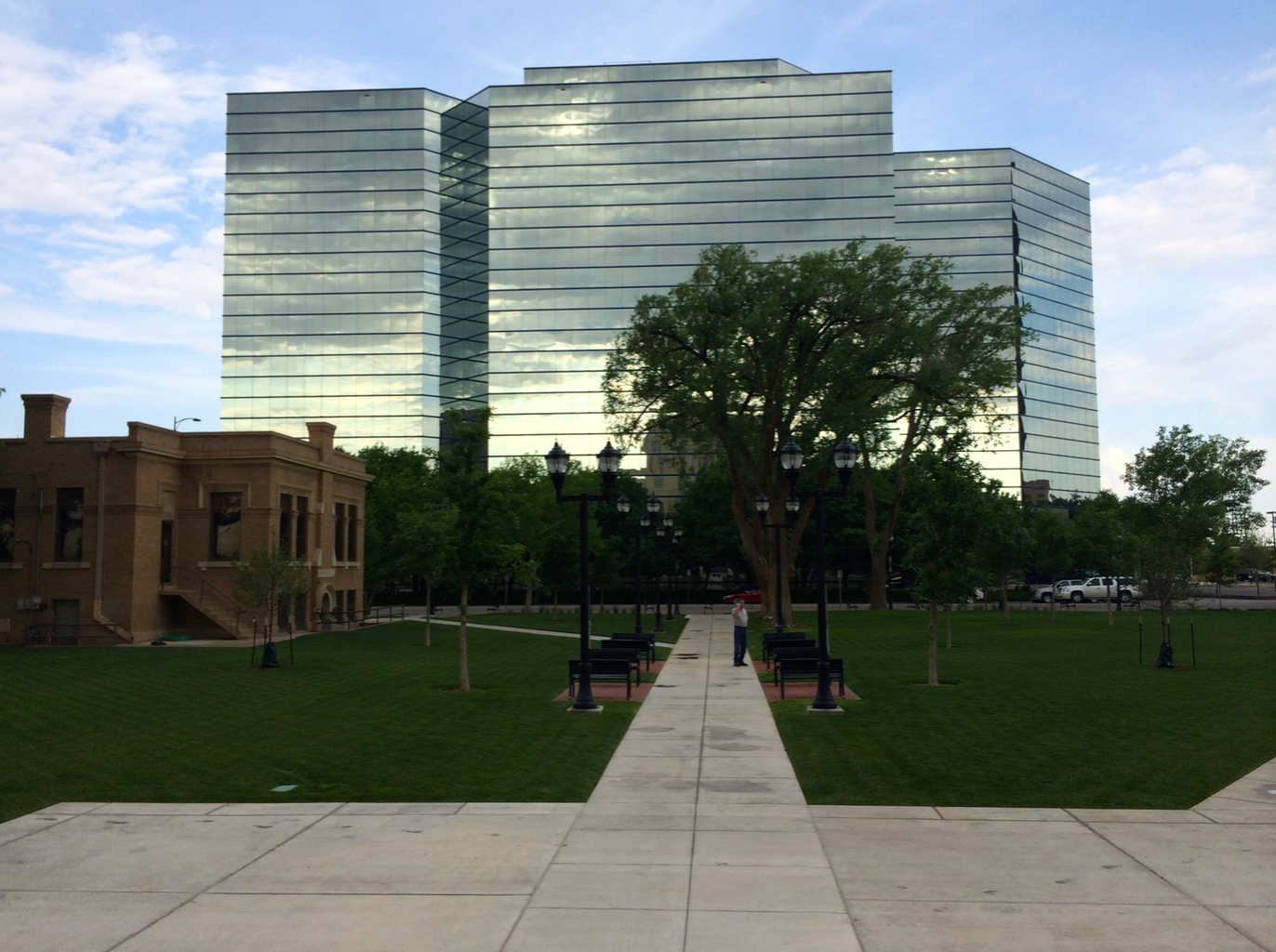 The view from the western entrance 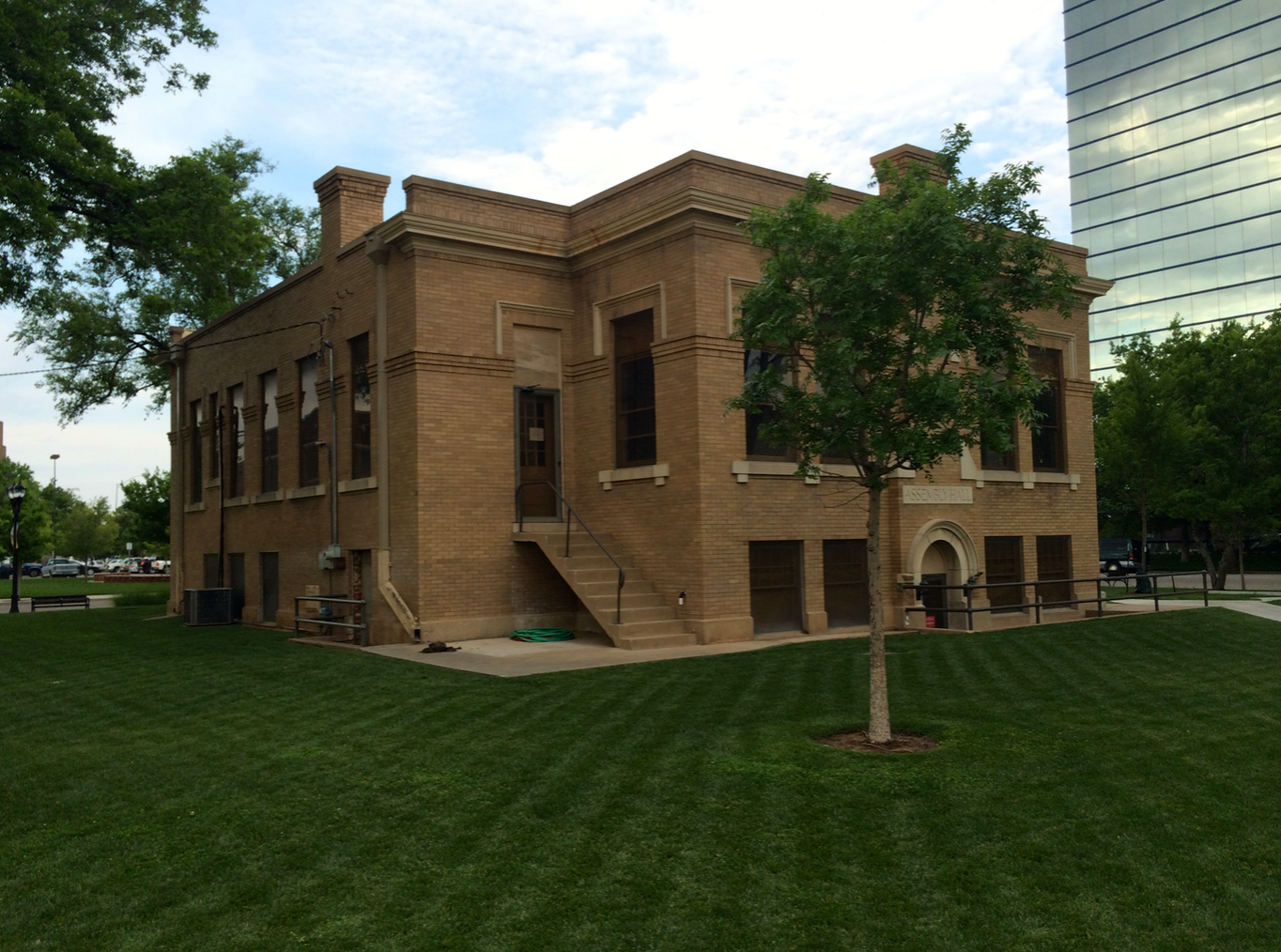 The Potter County Library stands on the southwest corner of the courthouse lawn. 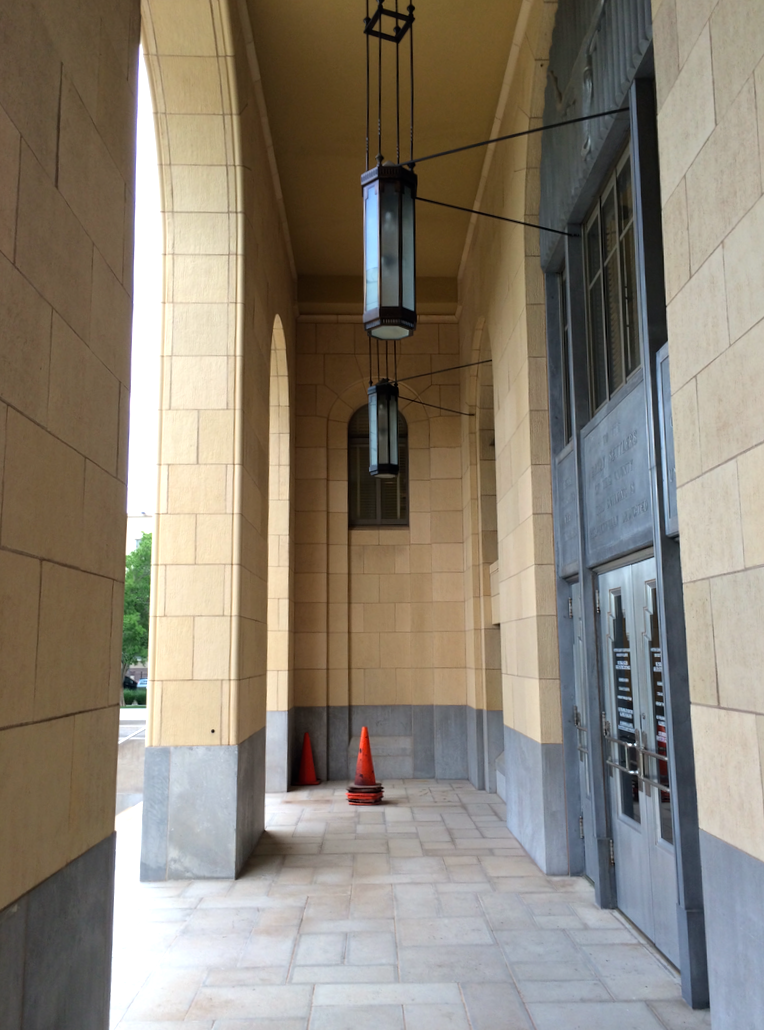 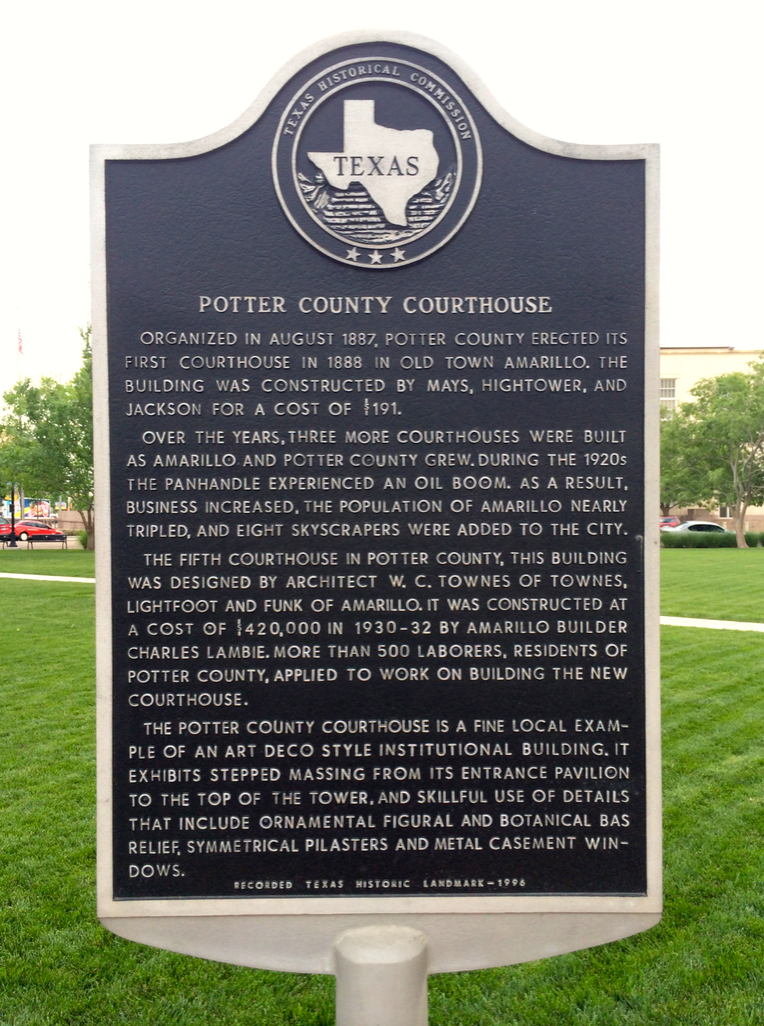 Detailed ornamentation near the roof pays tribute to the early pioneers of Potter County. 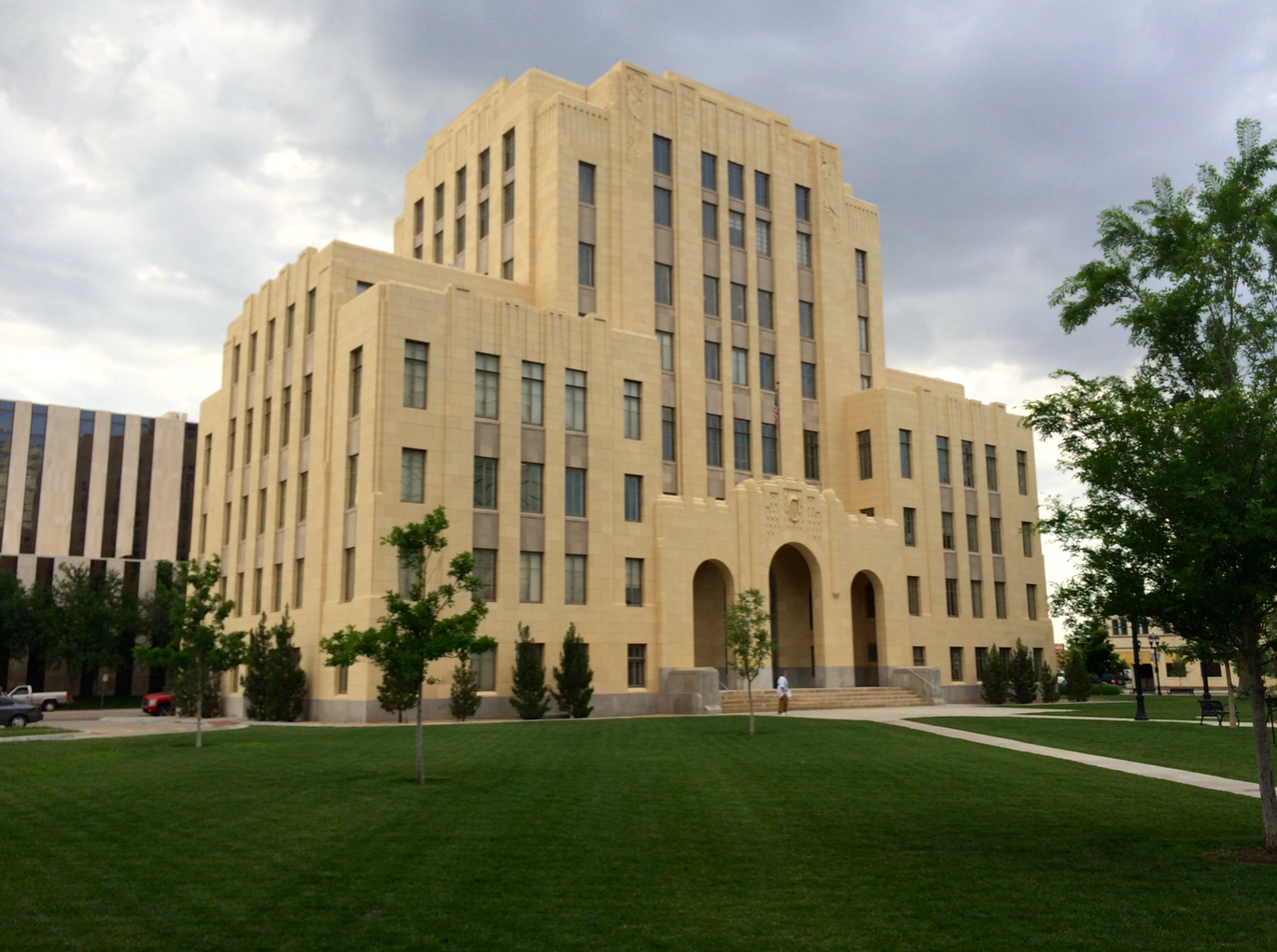 The northwest corner and the well-maintained courthouse lawn

Adjacent to the northern entrance is a large utility complex. 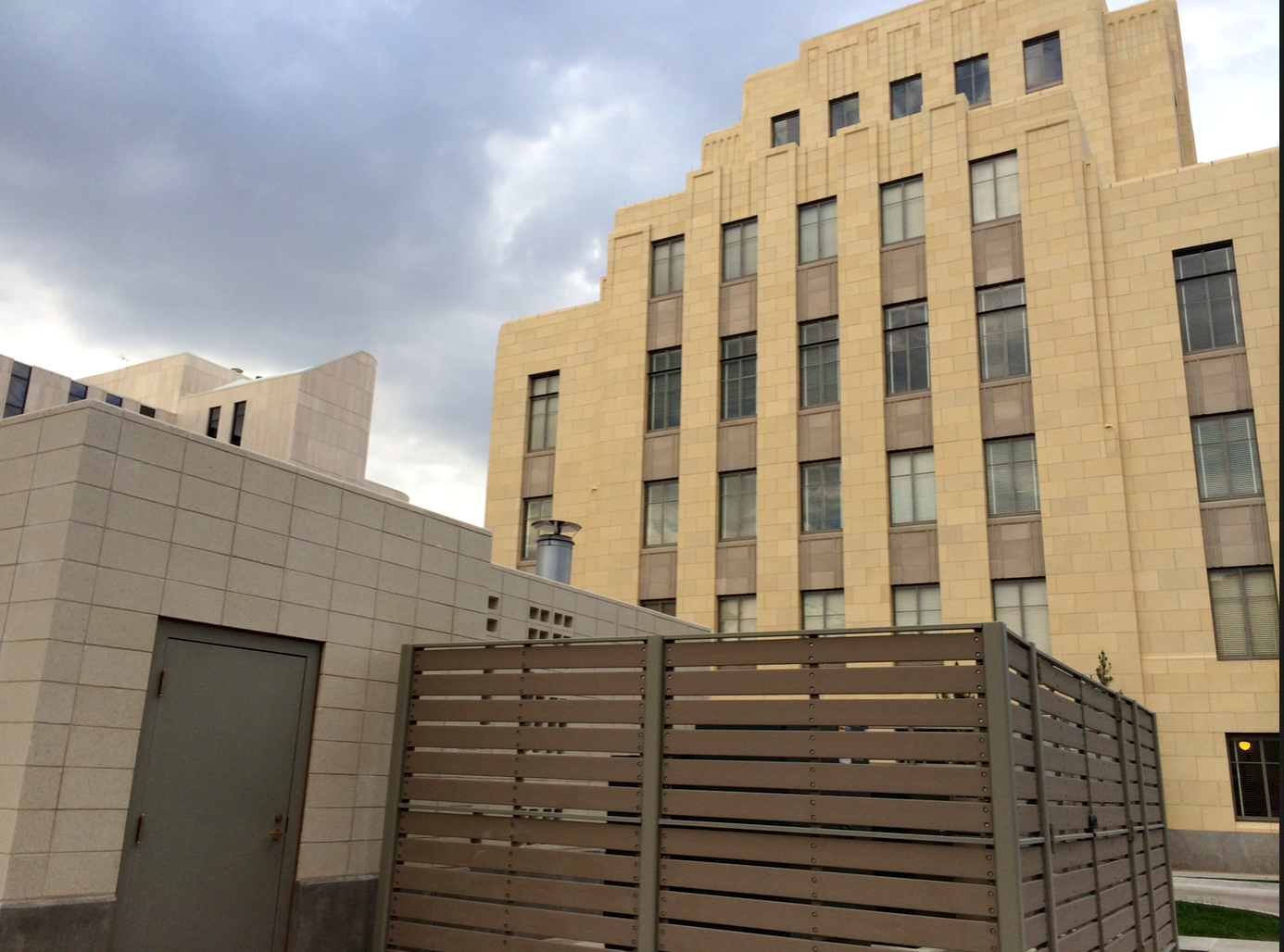 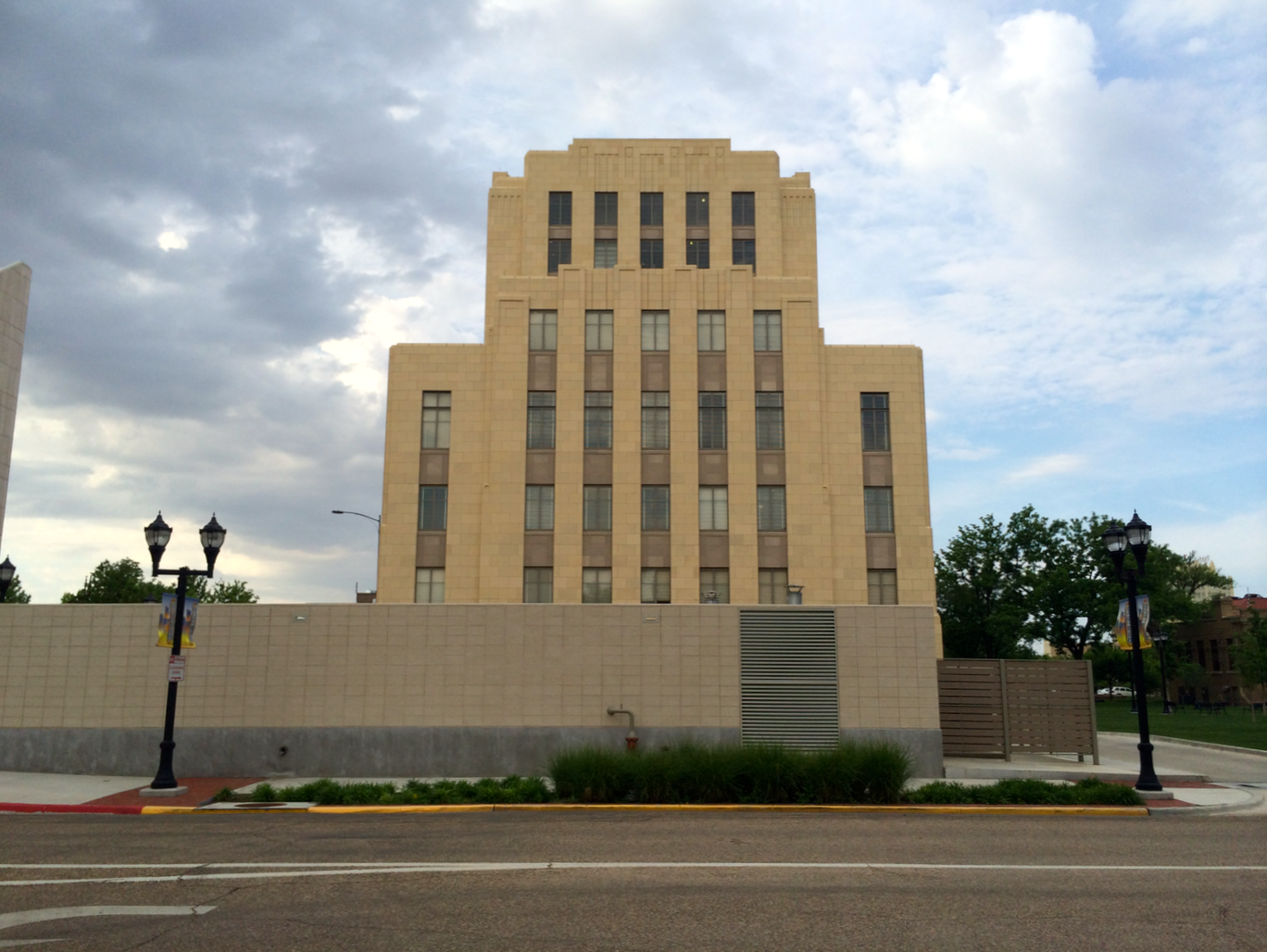 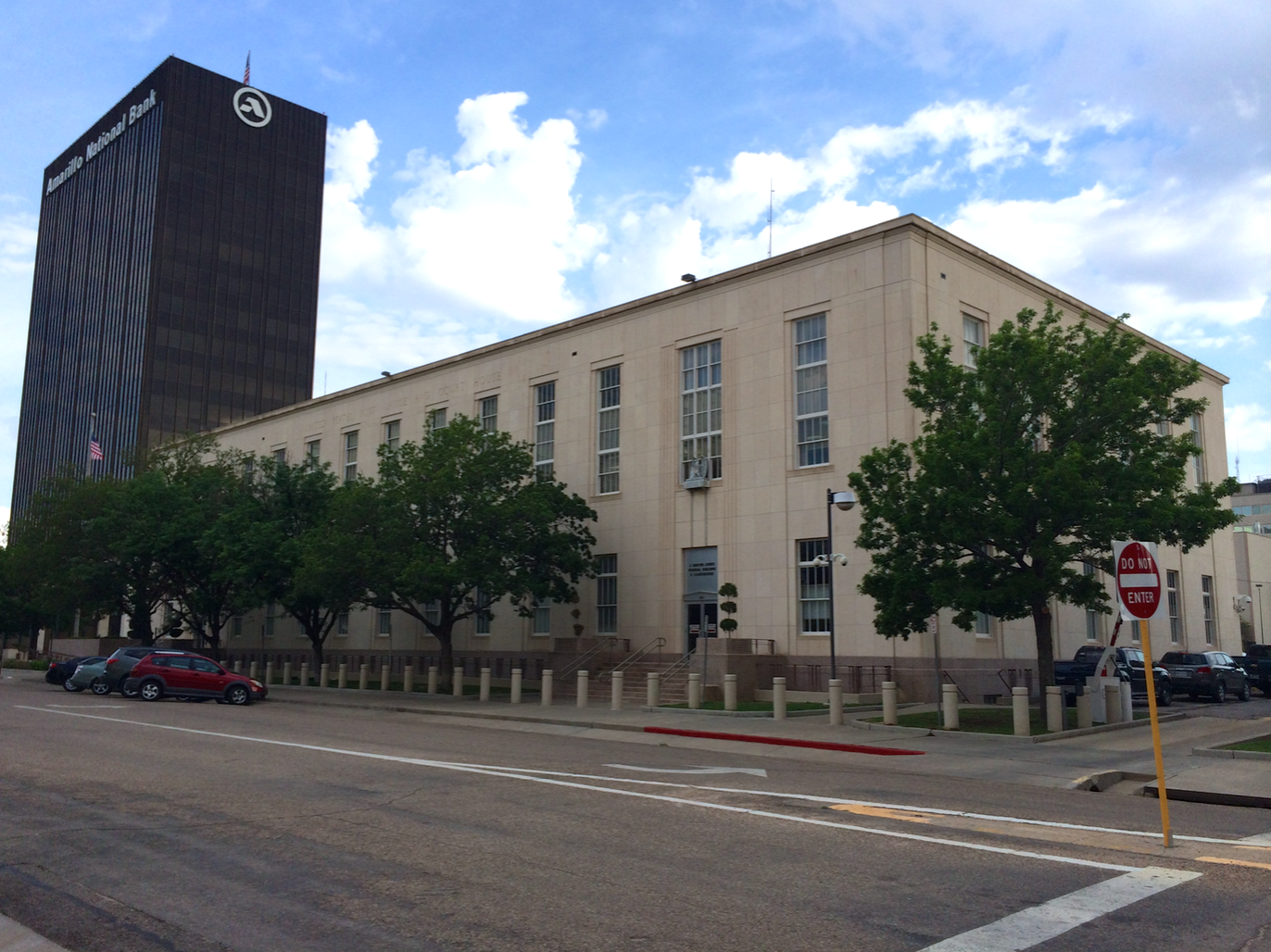 The J. Marvin Jones Federal Building & Courthouse is across 5th Avenue from the courthouse. 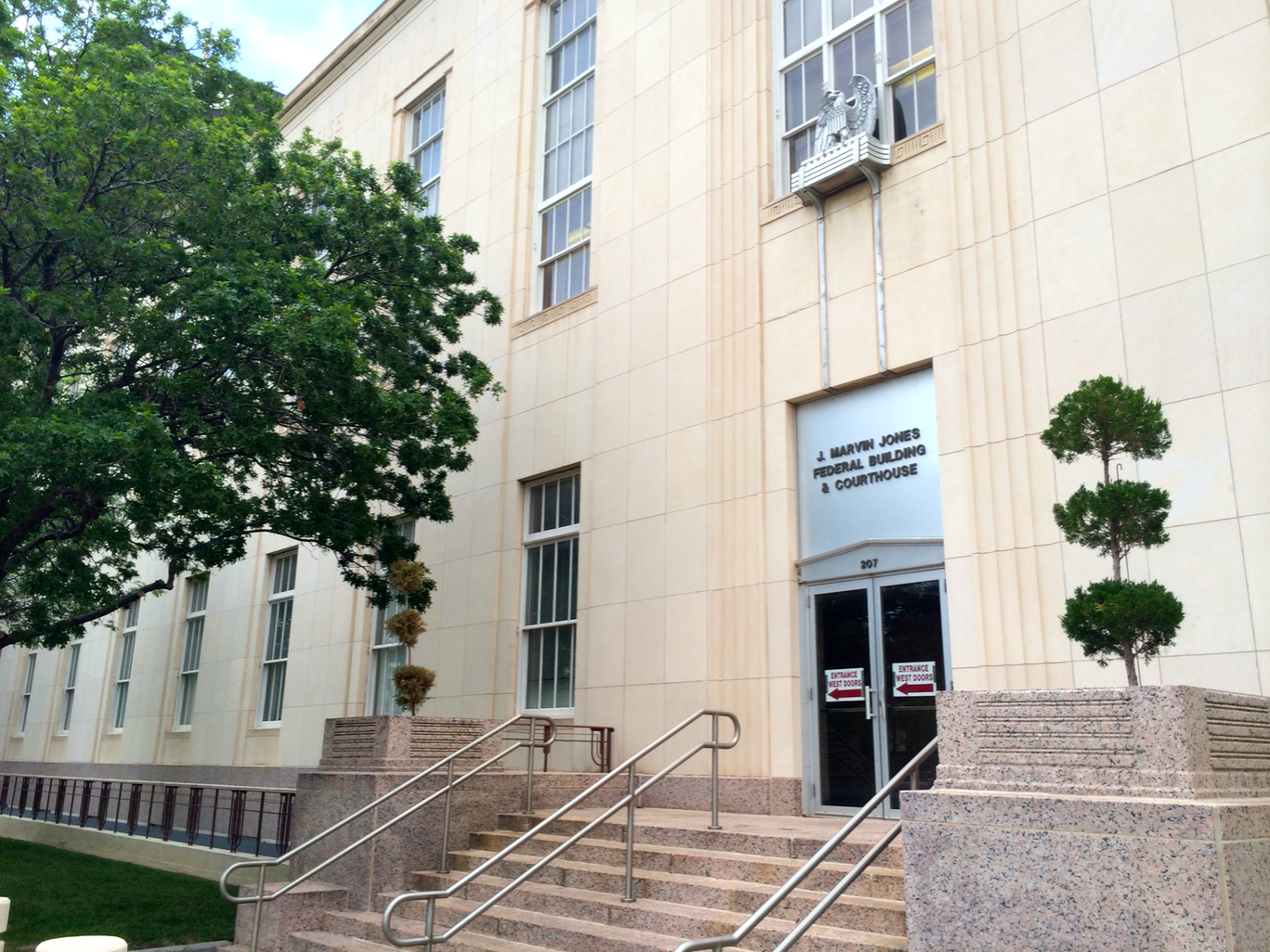 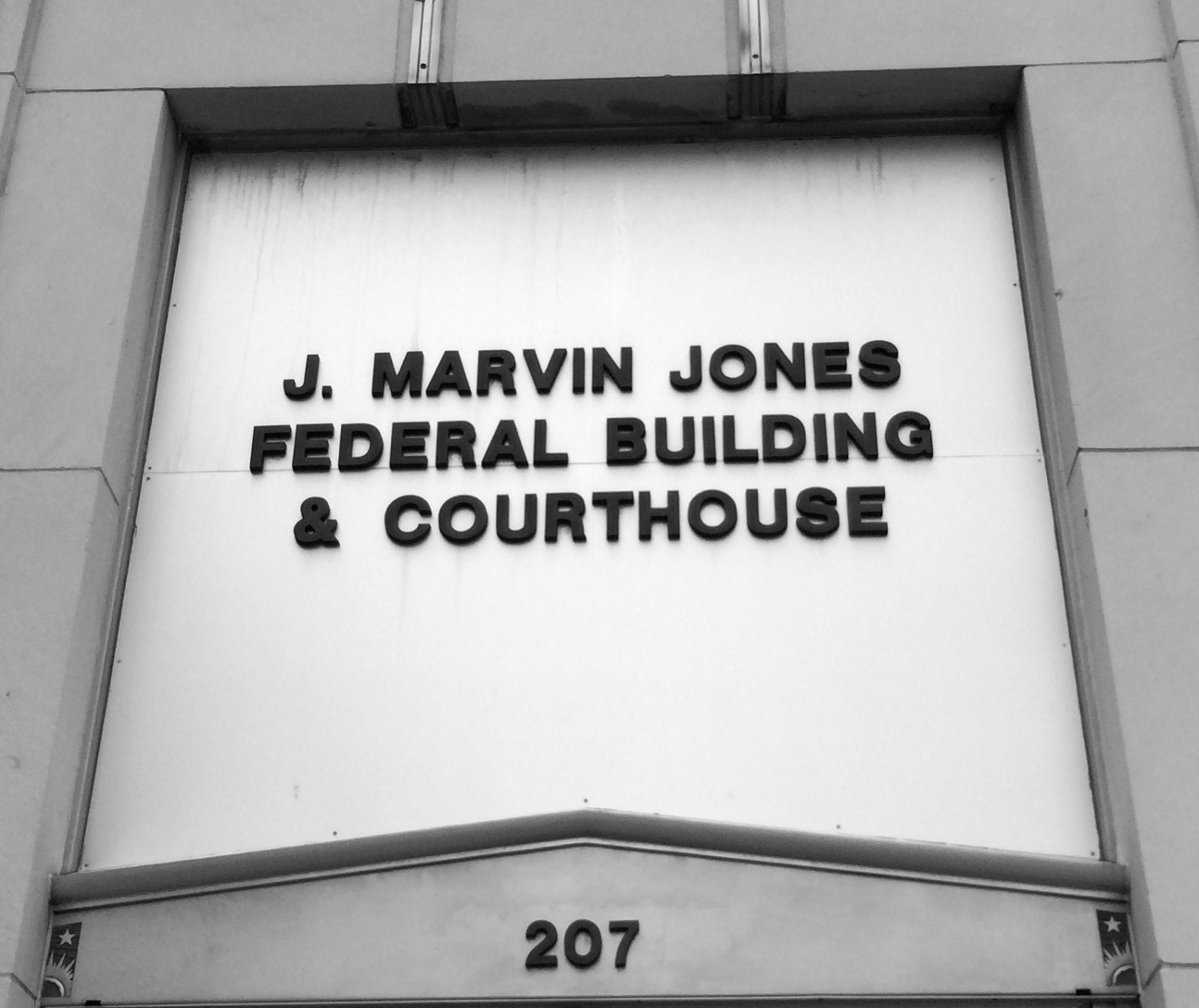 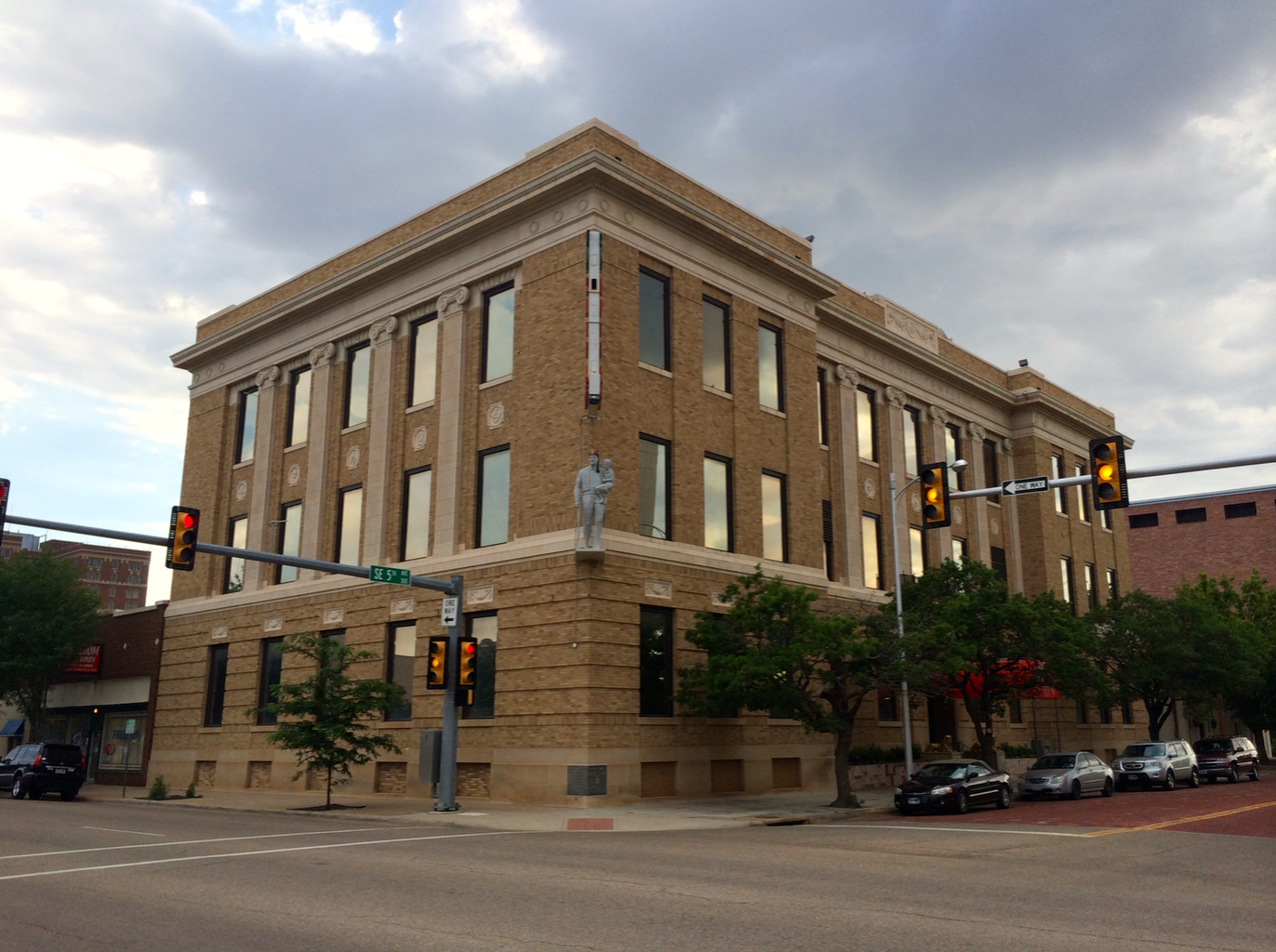 At the corner of 5th Avenue and Fillmore Street is the impressive-looking Khiva Shrine Center. It’s diagonal from the courthouse lawn’s northeast corner. Normally, I don’t photograph masonic lodges, but this one caught my eye. 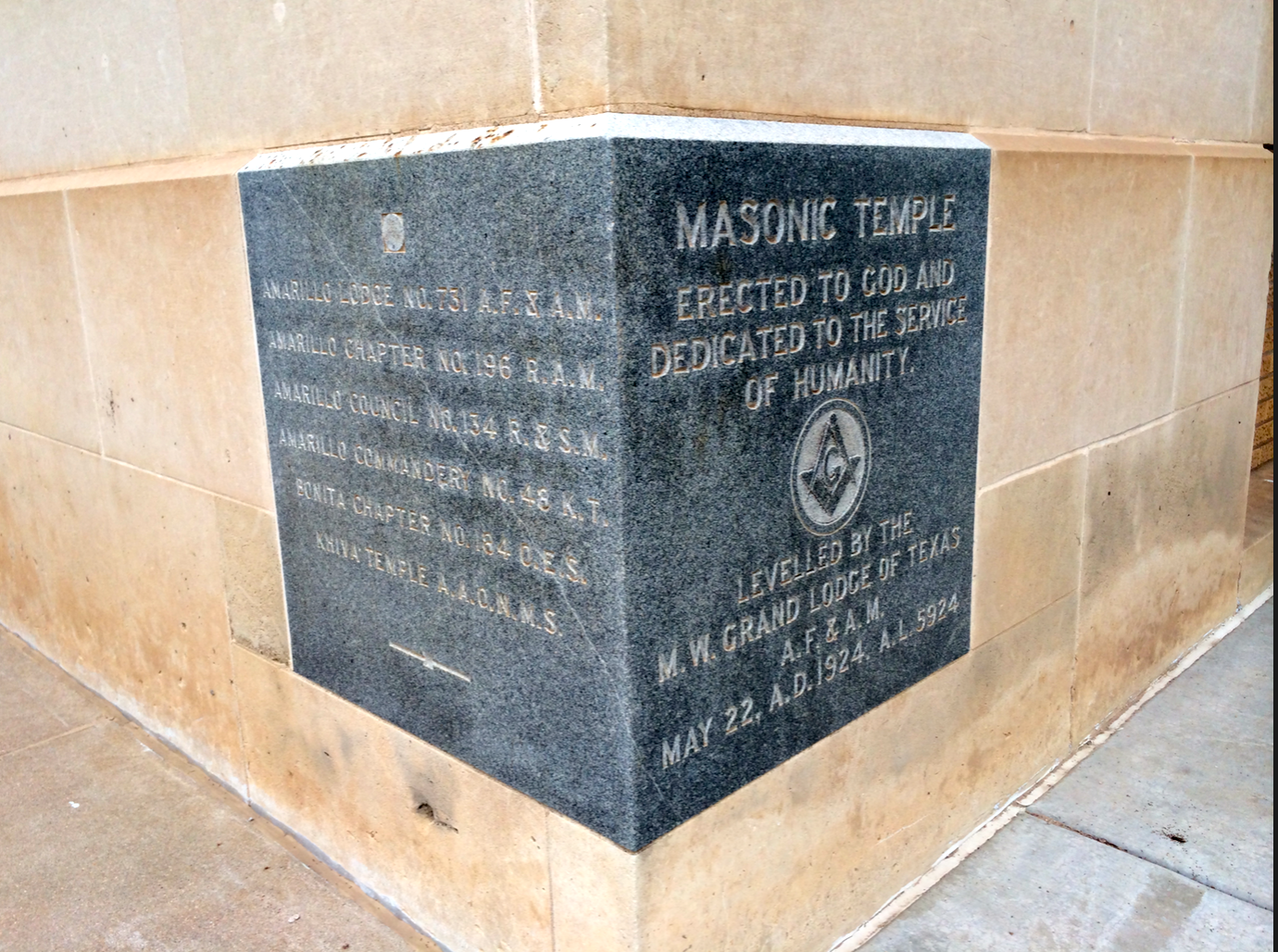