“Sutton County covers 1,455 square miles on the western edge of the Edwards Plateau; elevations range from 1,900 to 2,300 feet. Soils are generally shallow and stony, though deep loams are found along watercourses and irregular outcrops of limestone.”

“The region was originally home to a wide variety of game animals and predators, most significantly deer, quail, dove, wild turkey, plover, coyotes, timber wolves, and bobcats. Periodically herds of antelope and buffalo wandered onto the Edwards Plateau, though they were not native to the region.”

“The single most significant factor in the development of Sutton County has been the scarcity of water. Precipitation averages just twenty inches annually, and severe droughts occur regularly. Meager rainfall is further depleted by rapid evaporation due to the plateau’s constant, dry winds. Consequently, the county is completely dependent for its water supply upon deep wells that tap the Edwards Trinity Aquifer.”

“Anglo-Americans began moving into the area in the early 1870s. Initially attracted by the availability of water in various places along the Devils River, ranchers were soon drawn by the rich, unoccupied pastureland of the western Edwards Plateau. So successful were the herds that grazed in Sutton County, then a part of Crockett County, that by 1878 the region was known as Cattleman’s Paradise, a nickname that was soon changed to Stockman’s Paradise, since both sheep and cattle ranching were important.”

“With the tremendous growth of the cattle industry in the late 1870s and early 1880s, the available rangeland across Texas was occupied quickly and in time fenced off into ranches. This trend was reflected in Sutton County but was slowed by the lack of accessible water. In 1882 a traveler reported that the Birtrong Ranch, which depended on Wall’s Well, a seep discovered by Tom Birtrong and Ed Wall in 1881, was the area’s only ranch. By 1885 there were eleven, all but one located near the region’s few sources of groundwater. That one exception was the ranch of A. J. Winkler, who in 1884 had drilled a well, successfully tapping the water table. Henceforth, ranching on the Edwards Plateau was closely tied to well water, its extraction made easier by the development of the wind-powered water pump and the horse-powered drill. Increasing numbers of ranchers moved to the area and, in order to protect their water supplies as well as their range grass from roaming herds, began to fence off their holdings.”

“By 1898, scarcely ten years after the erection of the first fence, almost all of the area’s 120 ranches were fenced. The discovery of a reliable water supply also stimulated settlement. The area around Winkler’s Well [had become] a small frontier town, which by 1887 had twenty families and a number of buildings, including a Masonic lodge that doubled as a schoolhouse. At about the same time Charles G. Adams, a merchant and sometime rancher from Fort McKavett, moved to the area and settled two miles north of Winkler’s Well.”

“In 1887 the Texas legislature established Sutton County, which was carved out of eastern Crockett County and named after Confederate officer John S. Sutton. The establishment of Sutton County set off a new round of competition between the interests at Winkler’s Well, now called Wentworth, and Sonora, over the location of the county seat. “

“Initially Wentworth had the advantage, but in 1889 Charles Adams was successful in drilling a well on the Sonora courthouse property. With its water supply assured, Sonora proceeded to entice settlers with land grants. This program proved decisive, for by the time of the 1890 election Sonora had a large enough population to assure that it, not Wentworth, would be the county seat. By 1900 Wentworth had ceased to exist.”

The transformed First National Bank serves as the current city hall. This lies at the end of the “main stretch” of buildings perpendicular to the courthouse. 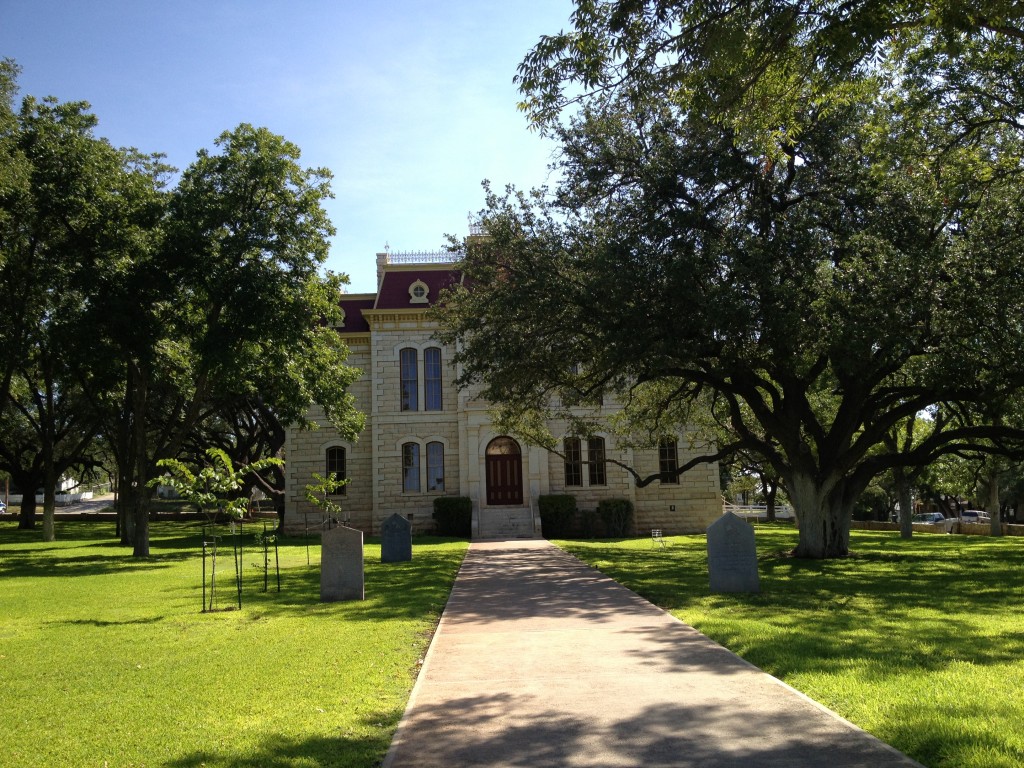 The courthouse property has a wealth of historical makers. 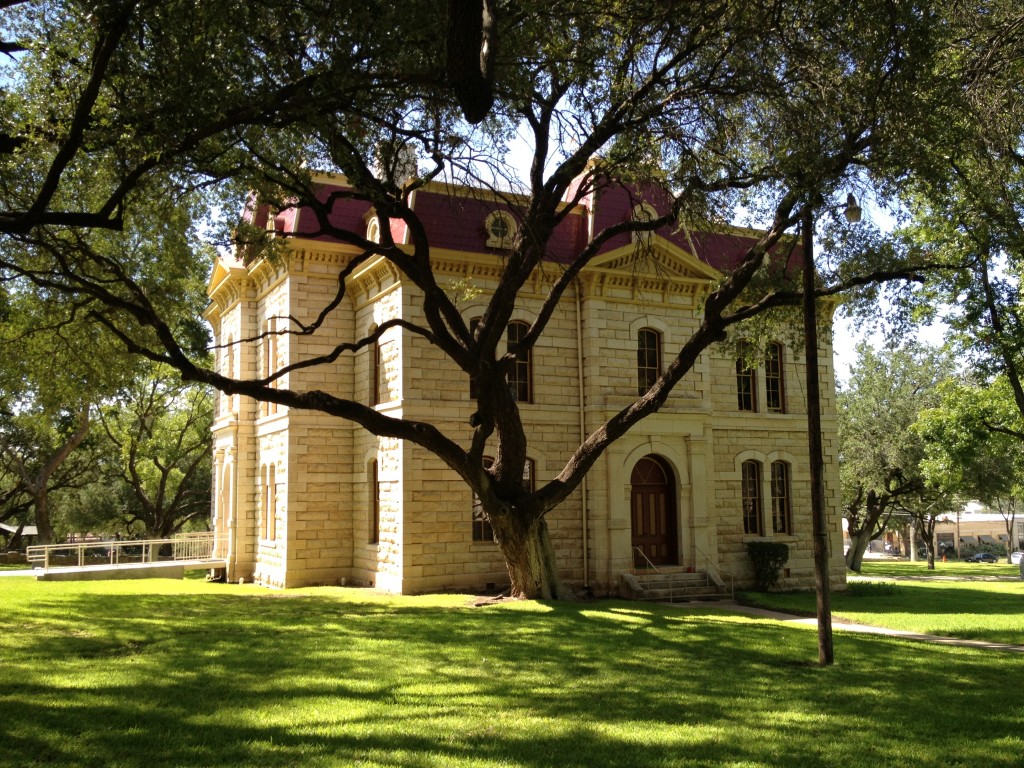 The building is instantly recognizable as a work of one of the Ruffini brothers. 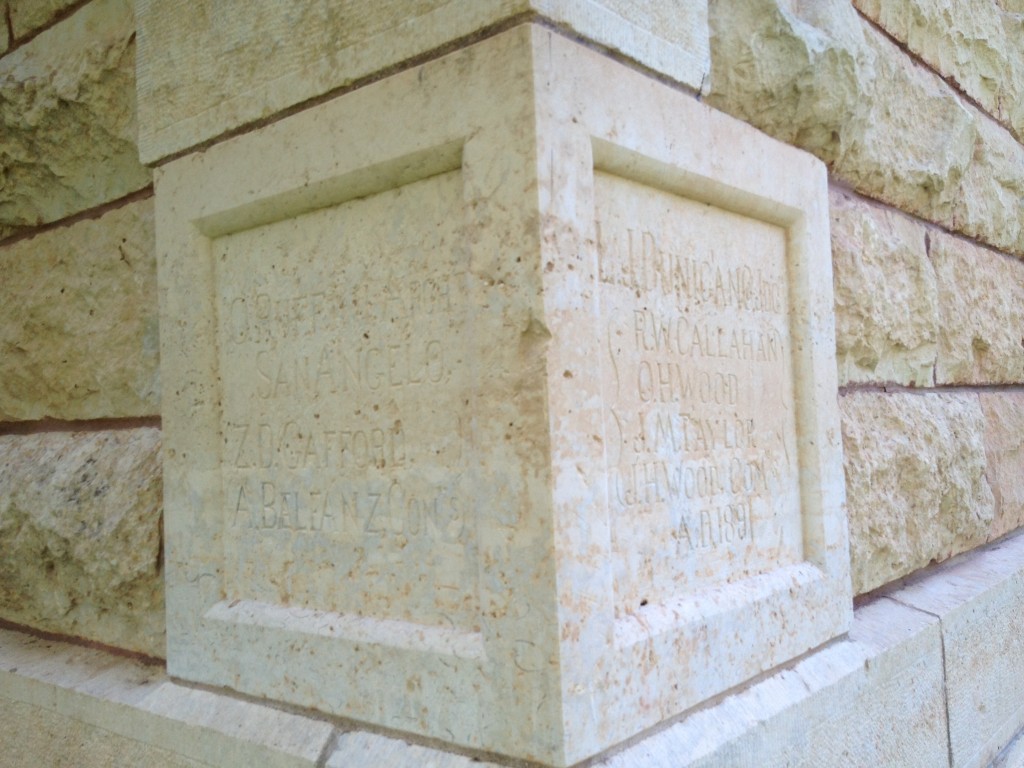 Oscar Ruffini, to be exact 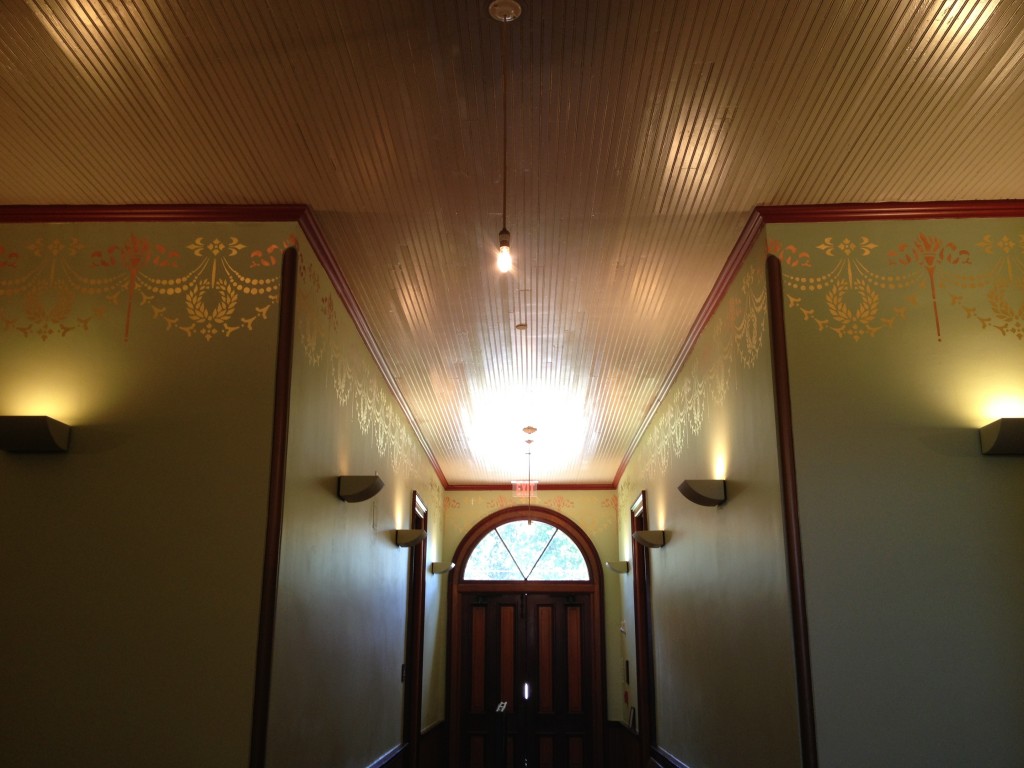 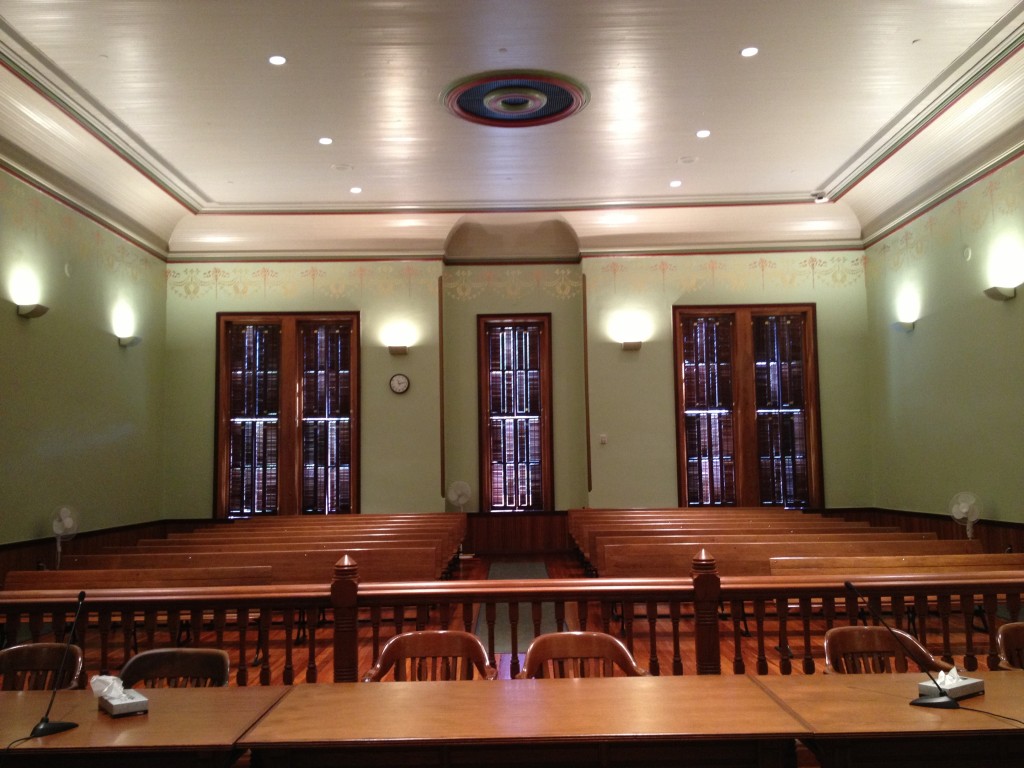 I particularly like the steps leading to the judge’s seat. 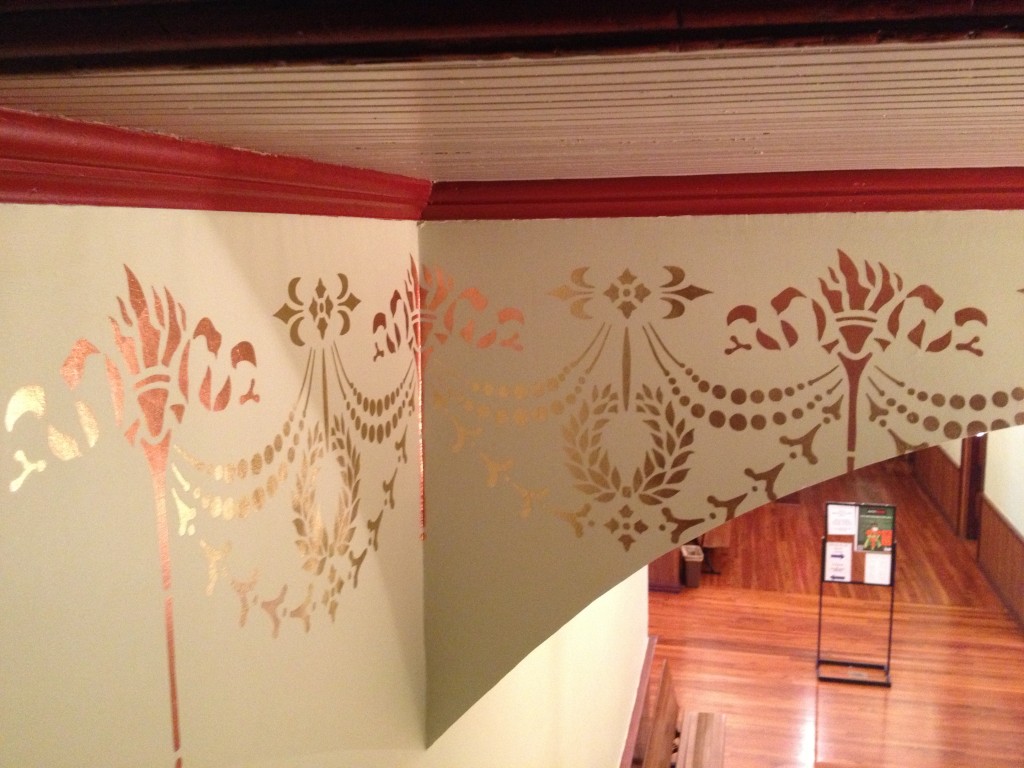 An example of the intricate design on the walls 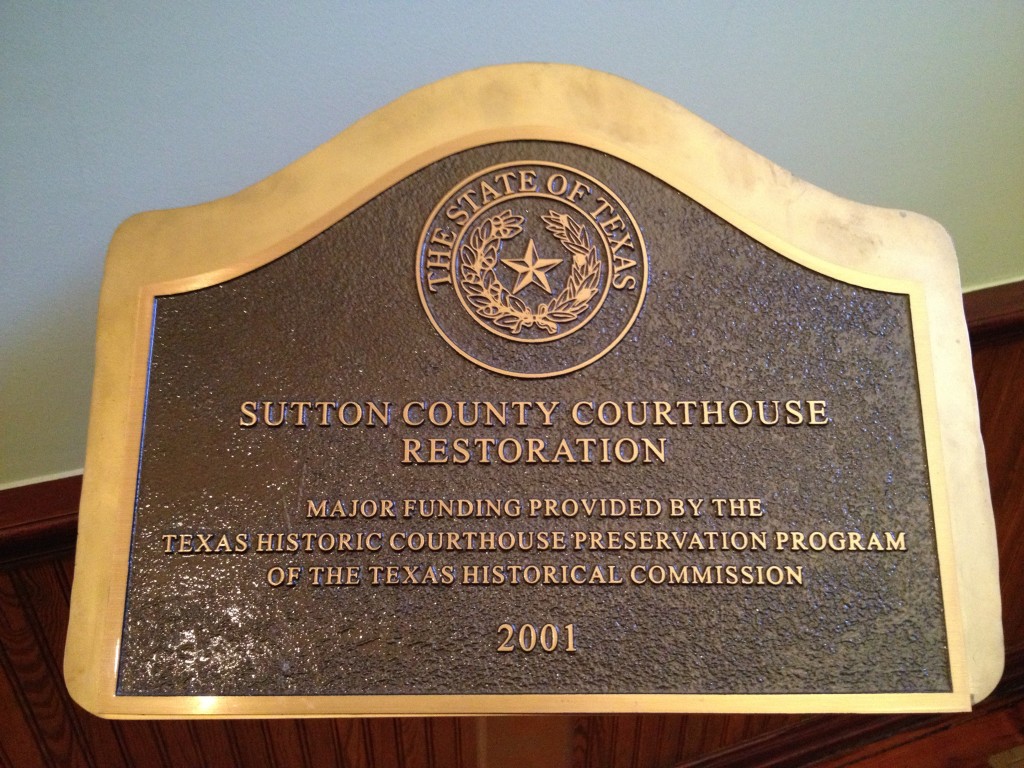 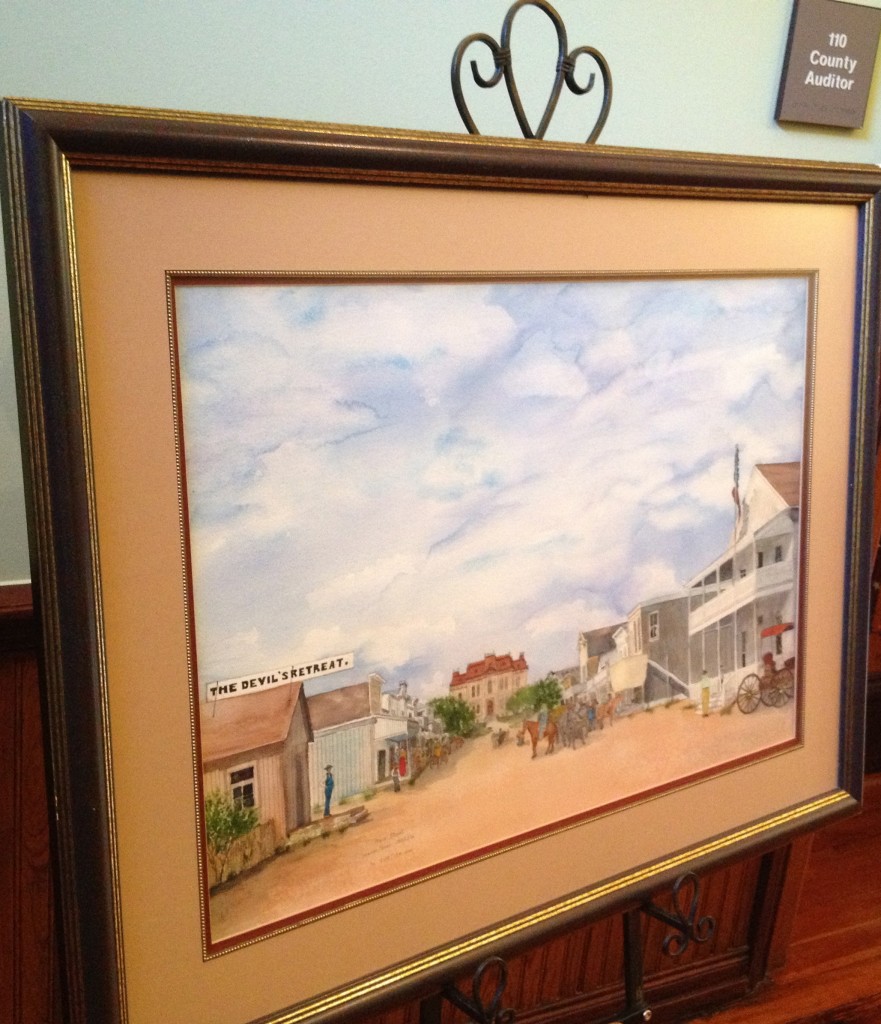 Displayed on the first floor of the courthouse 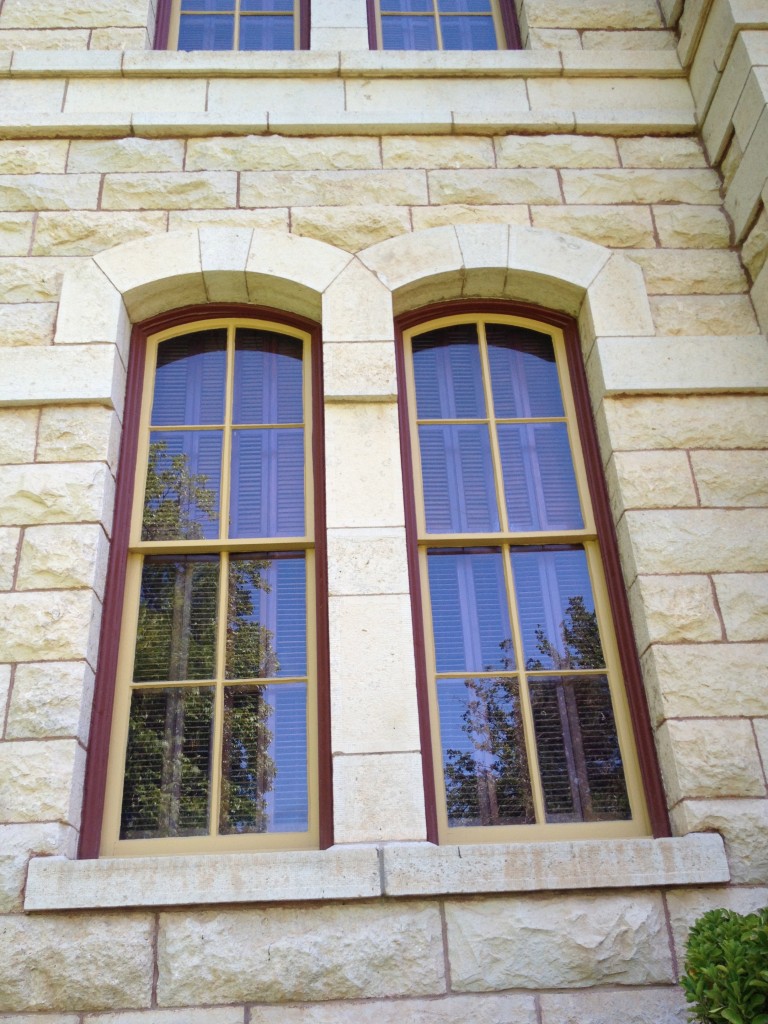 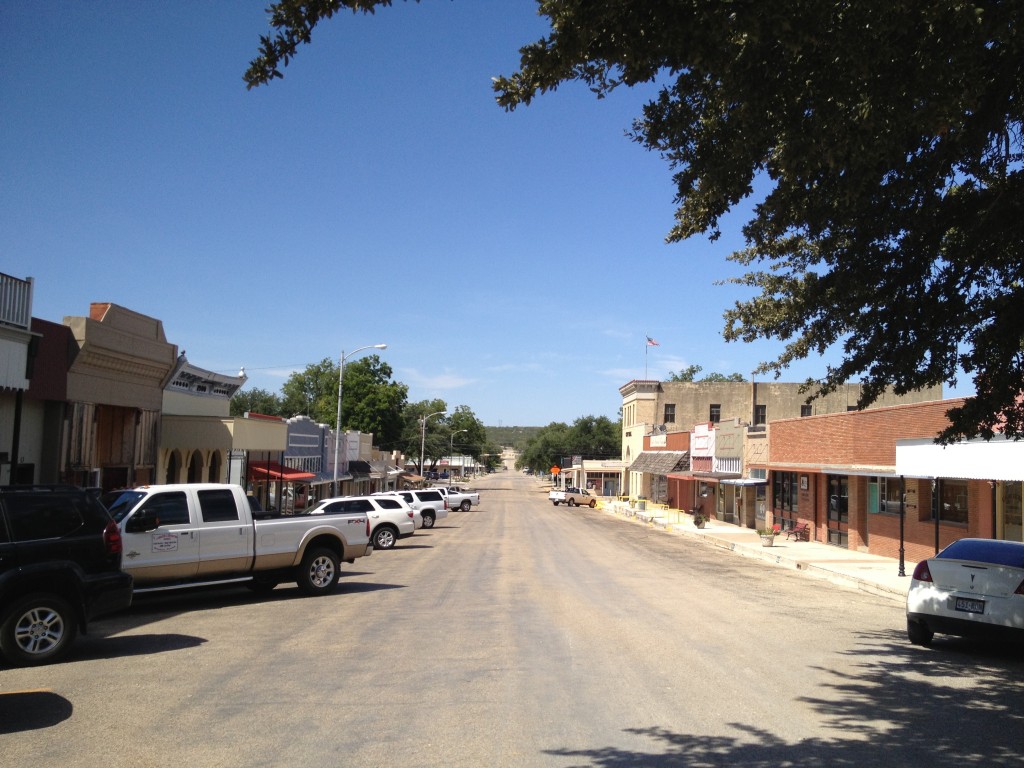