“Sanderson, the county seat, is about halfway between San Antonio and El Paso. The county was named for Alexander Watkins Terrell. Terrell County comprises 2,357 square miles of rocky terrain with elevations ranging from 1,300 to 4,000 feet above sea level. The soils are of limestone origin. Most of the county is situated in the Stockton Plateau, a part of the Western Mountain region.”

“The eastern and northeastern parts of the county consist of gently rolling to level plains. In the western part the land slopes much more and the rolling terrain becomes mountainous, with narrow canyons and valleys. In the southern portion, the rocky lands near the Rio Grande are cut by deep canyons that carry floodwater into the muddy Rio Grande, which defines the county’s southern boundary.”

“Mule and whitetail deer are the principal game animals in Terrell County. Other game species are the javalina (collared peccary), wild turkey, mourning dove, white-winged dove, and blue quail. Furbearers include the grey fox, coyote, raccoon, bobcat, ringtailed cat, and mountain lion. Many varieties of ducks and other birds use Terrell County’s stock ponds and pastures as resting and nesting places during their seasonal migrations.”

Almost all of the area’s agricultural income derives from livestock, especially Angora goats and sheep; mohair and wool are the most important agricultural products. Some cattle are also raised in the area, and some local growers produce pecans.”

“Between 1871 and 1905 the area was part of Pecos County. The region was opened for settlement in the early 1880s in anticipation of the arrival of the Texas and New Orleans Railroad, which had surveyed a route through the region.”

“Cyrus W. (Charley) Wilson developed a townsite called Strawbridge at a designated stop along the railroad, where he bought the land and laid out streets and lots. In May 1882, when the Galveston, Harrisburg and San Antonio Railroad reached the site, the town was renamed Sanderson after a railroad engineer. Charles Downie, a Scot, the first permanent sheepman in the area, homesteaded there in 1881. He eventually increased his holdings to around 150,000 acres. Dryden, the only town besides Sanderson in the county, was also started in 1882 when the railroad built through the area. It was headquarters for the Pecos Land and Cattle Company, a huge ranching operation in the earliest days of white settlement.”

“Goldseekers searching for [a rumored mine] traveled to the county, as did a number of outlaws and gunmen. Roy Bean operated a saloon at Sanderson. By 1900 the population of this community was 112, and post offices had been established there and in Dryden.”

“Terrell County was formed by an act of the Texas legislature on April 8, 1905, and organized on July 27 of that year. Sanderson became the county seat. Cattle and sheep ranching have dominated the county’s economy since its beginnings.”

“Sanderson was struck by a flood on June 11, 1965, in which twenty-eight people died. Two of them were never found. Heavy rains to the west and northwest of the town, on the watersheds of the Sanderson Canyon draw and the Three-Mile draw sent the floodwaters through the town, destroying many homes and businesses.”

“In the mid-1980s sheep continued to outnumber other domesticated animals in Terrell County. In 1984 county stockmen were raising 90,000 sheep, 72,000 goats, and 9,500 cattle. Sheep and goats are susceptible to such predators as coyotes and mountain lions, however, and in the 1980s a number of local ranchers blamed predators from nearby Big Bend National Park for livestock losses.”

“By 1990 only 1,410 people were living in the county. In the mid-1980s Dryden was still an important community in the county, having a post office, service stations, and a general store. It also served as a rallying point for “float trippers” at the end of their runs down the lower canyons of the Rio Grande. The river runners often end their journeys on a ranch south of Dryden. In 1990 there were thirteen residents in Dryden. Sanderson (1990 population, 1,128) is the county’s commercial center.”

The Terrell County Courthouse is the only courthouse in Texas built completely in the Mediterranean style. Also, Sanderson and surrounding Terrell County is featured in Cormac McCarthy’s book No Country for Old Men that was made into a 2007 film.

The THC describes the original courthouse of Terrell County as being a: “3-story stucco structure with Spanish tile roofs, exemplary Mission-style details including: rope molding surrounding arched entry with full fanlight and repetitive arched applied stucco detail.” The courthouse has gone through two remodels: one in 1930 and one in 1983. The 1930 remodel severely changed the look of the building to almost all of which is standing today. In 1983, a new tile roof and a one-story addition were added.

The Courthouses of Texas discusses the courthouse as such: “[a] 1906 Mediterranean-style building with tile roof and details vaguely reminiscent of Moorish Spain.” Below are my pictures of it and my trip to Sanderson.

Number for the County: 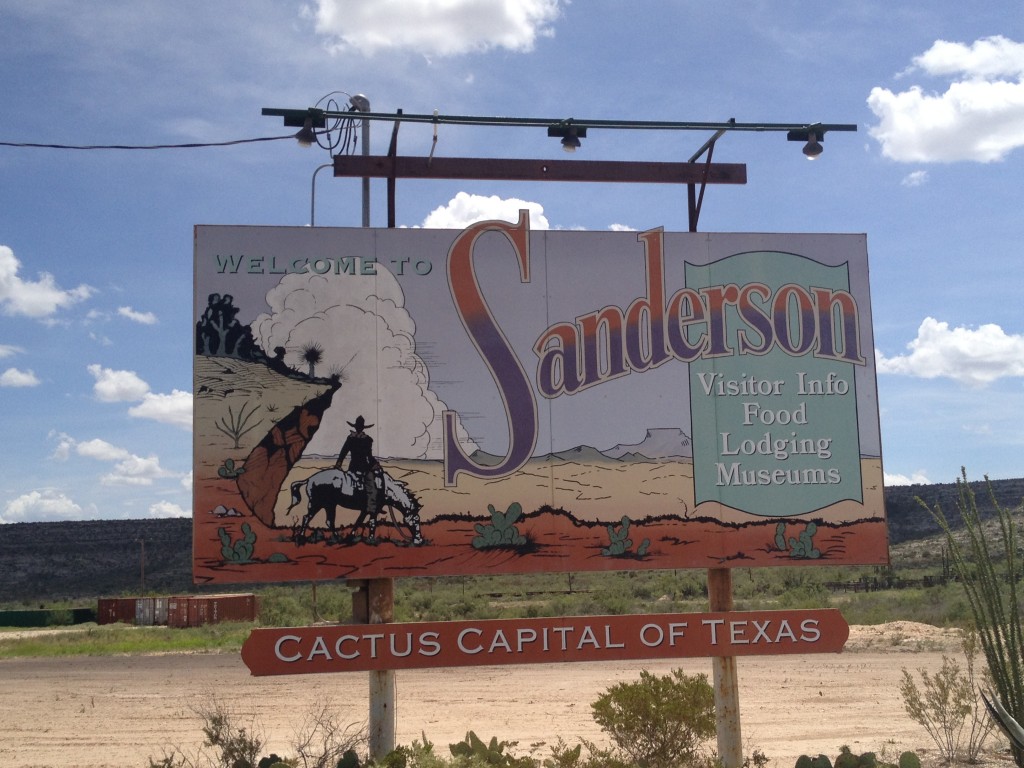 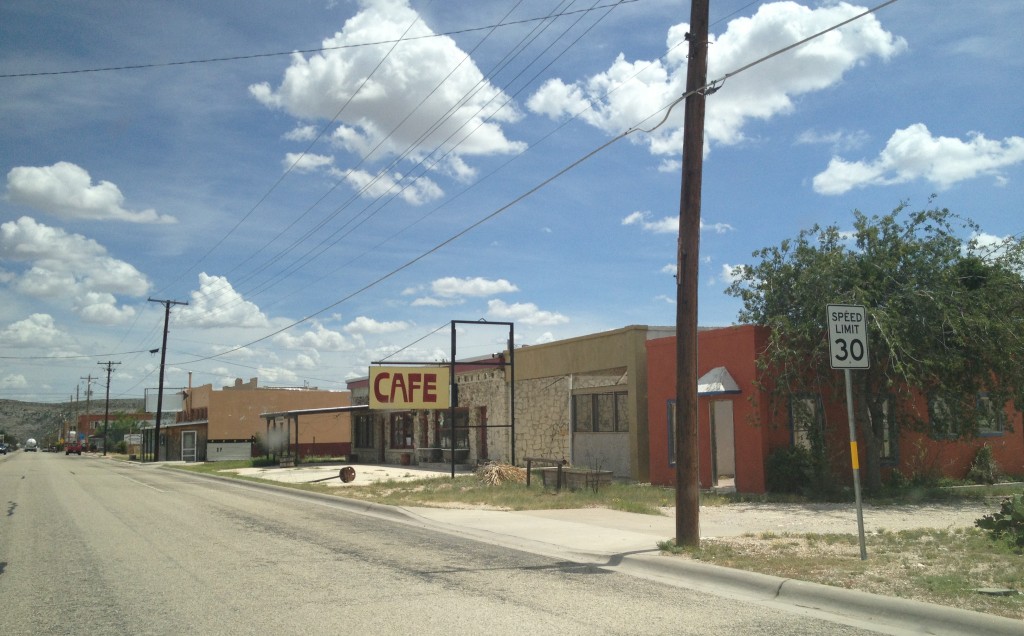 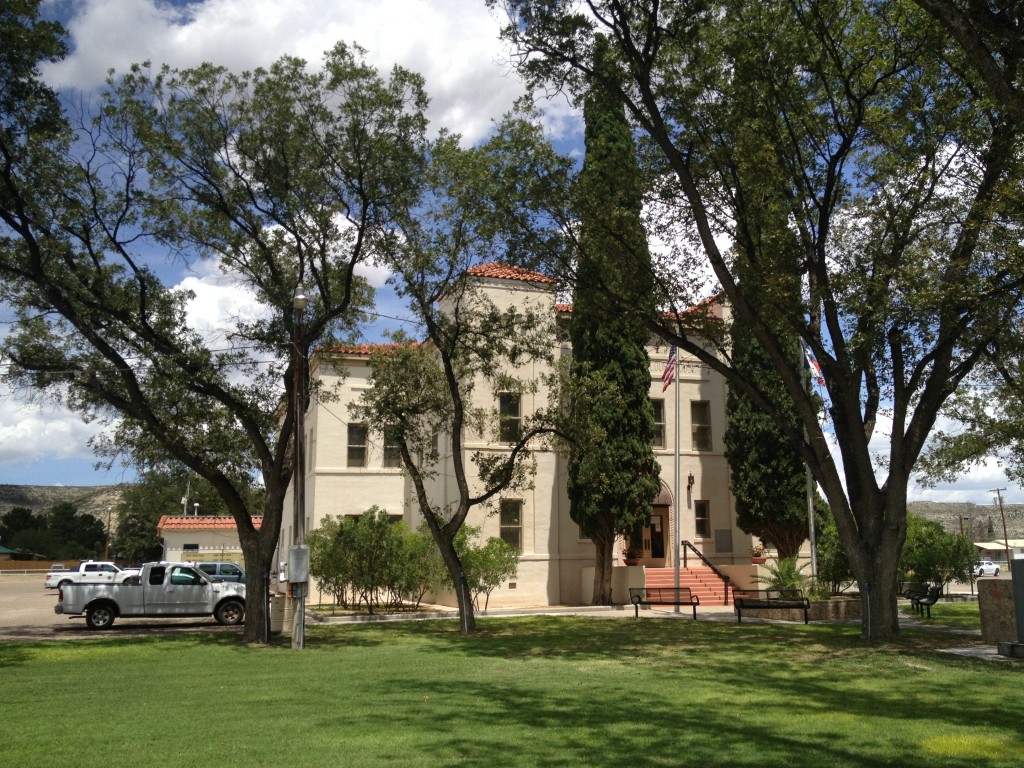 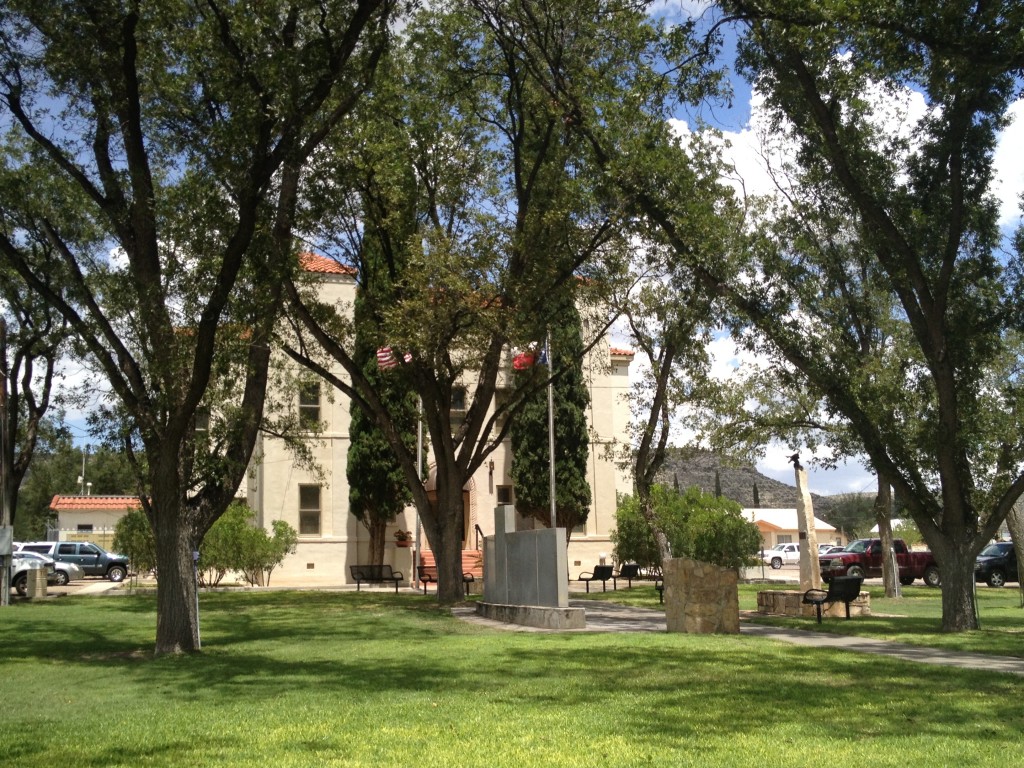 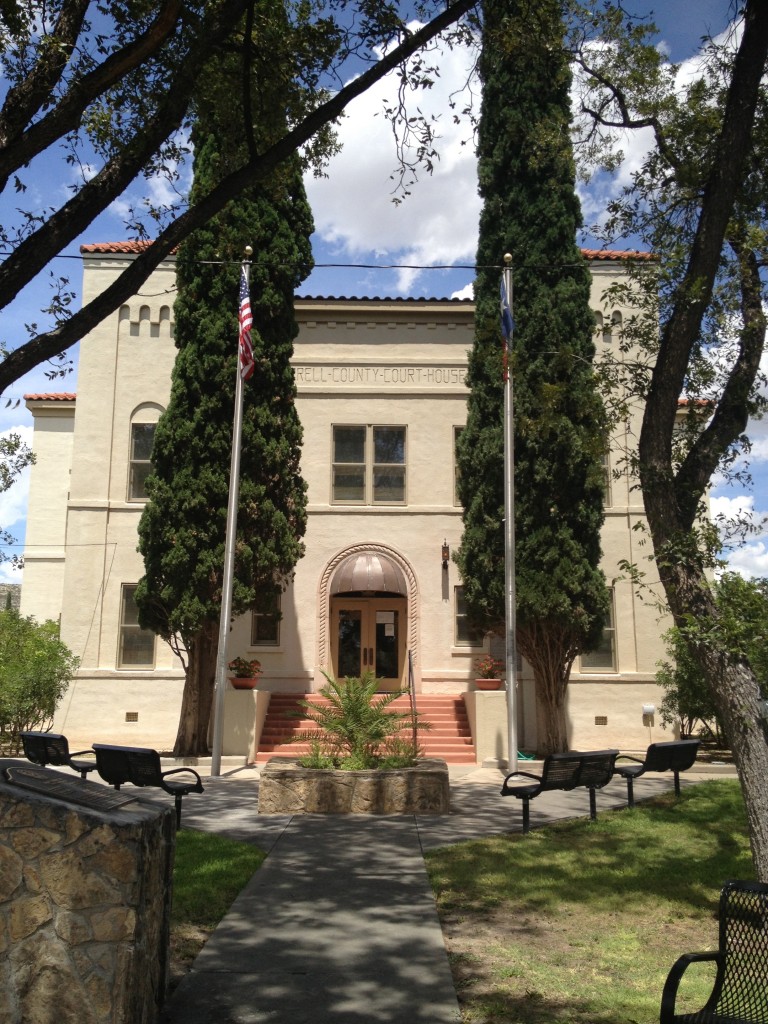 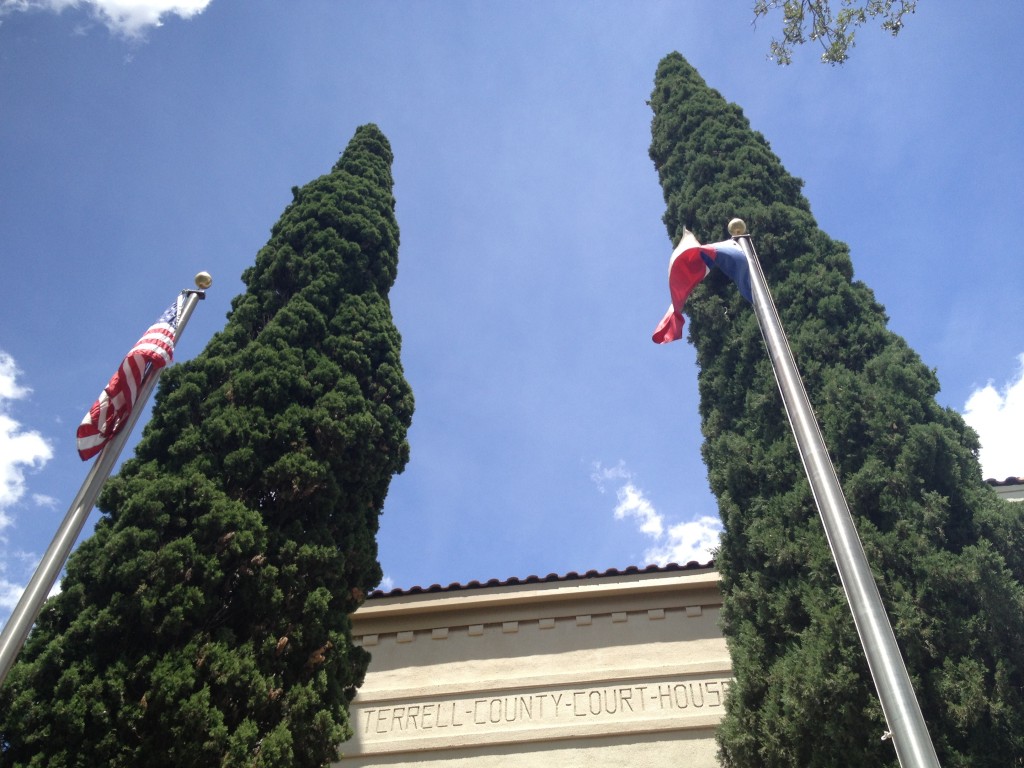 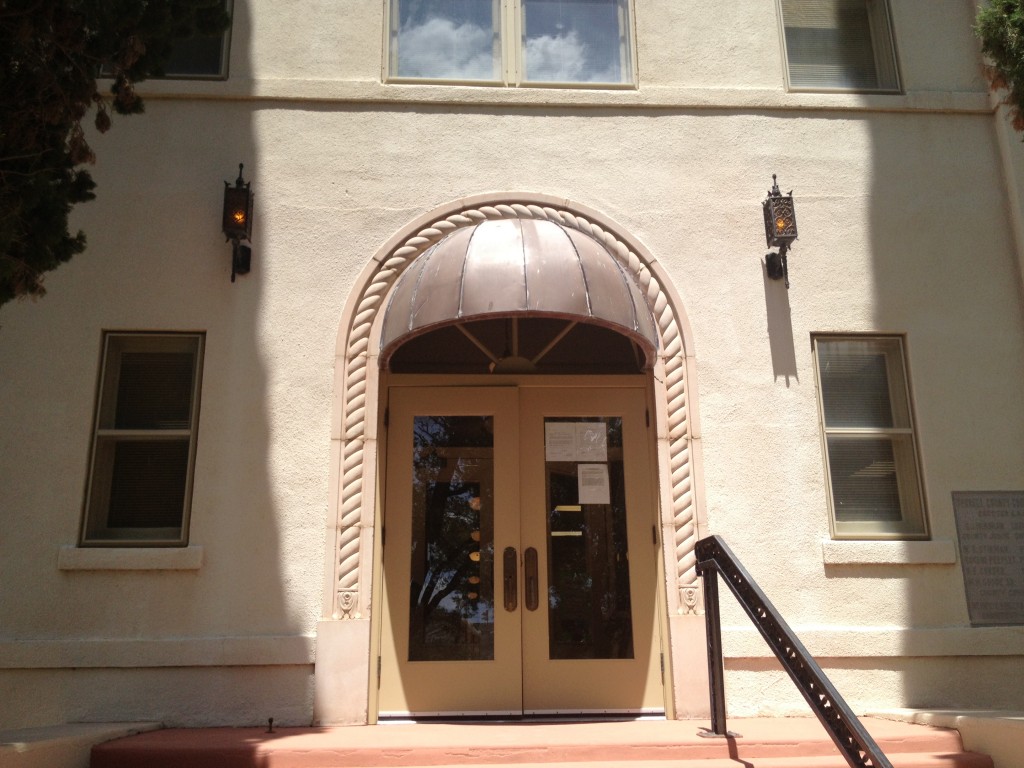 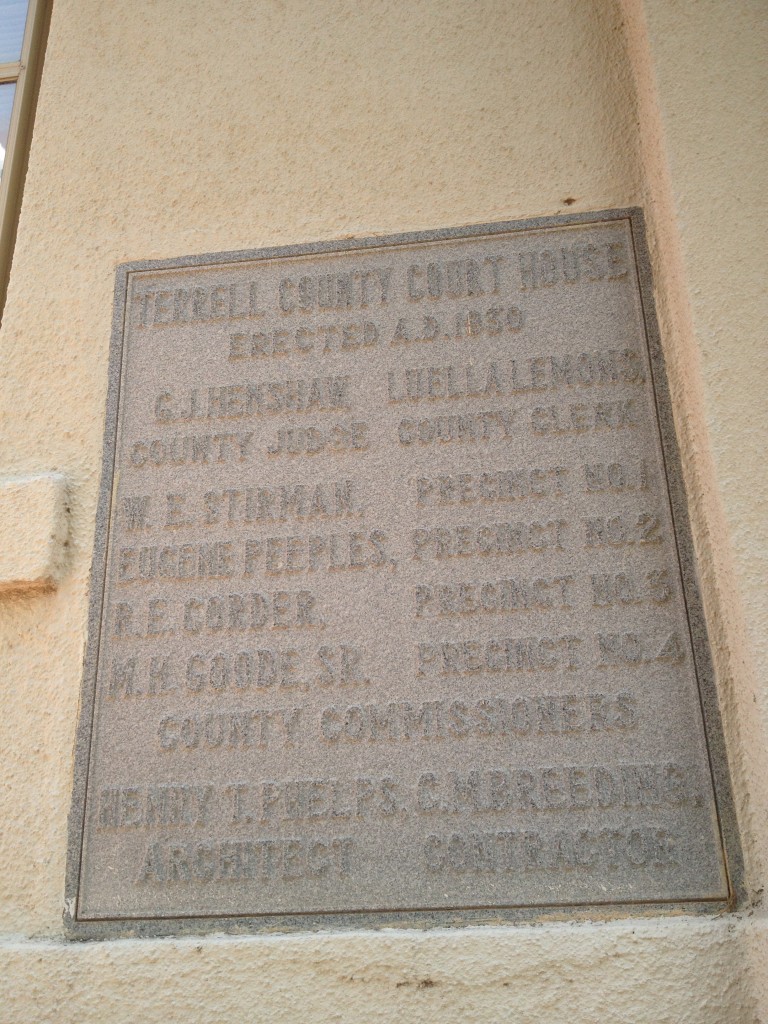 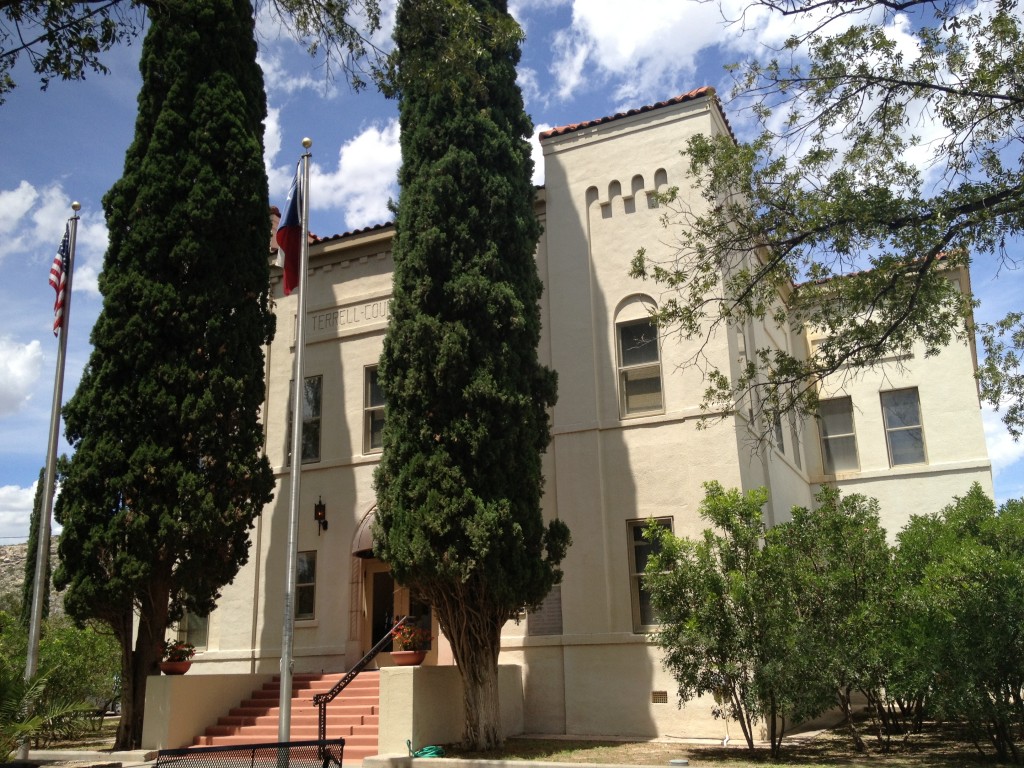 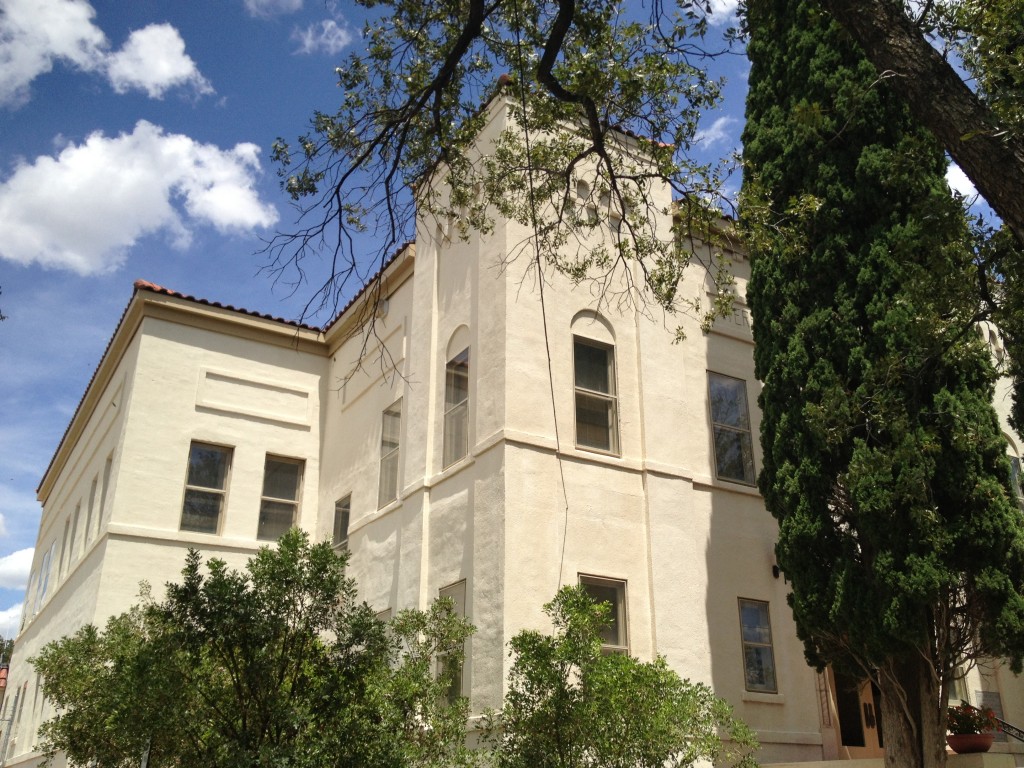 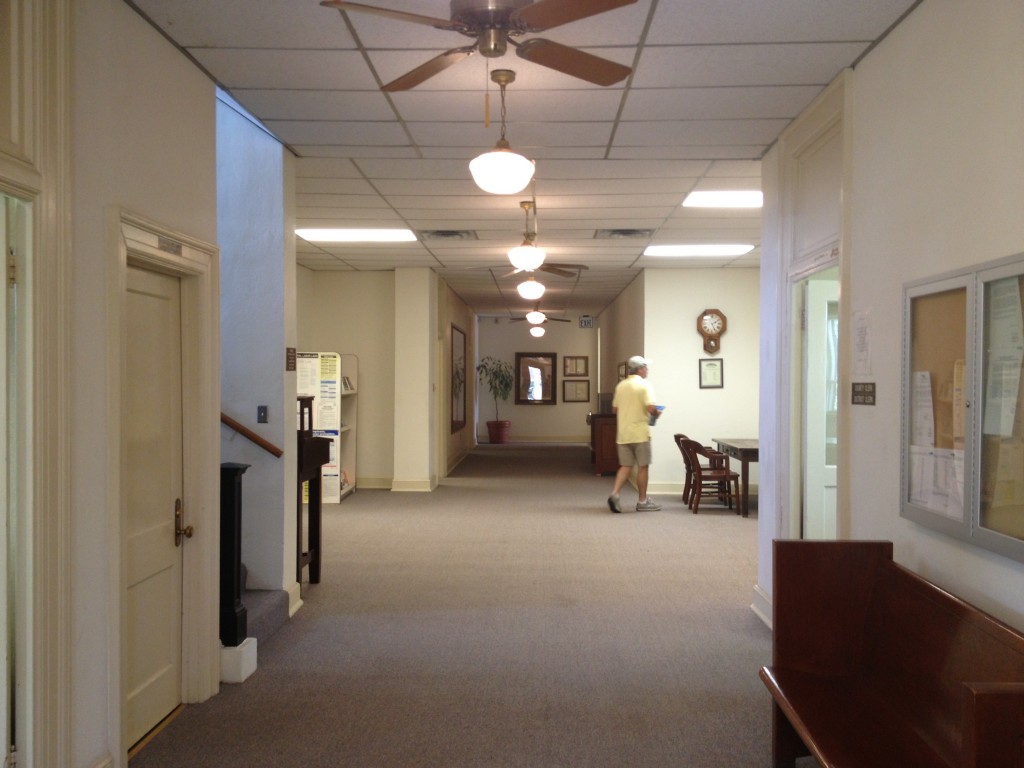 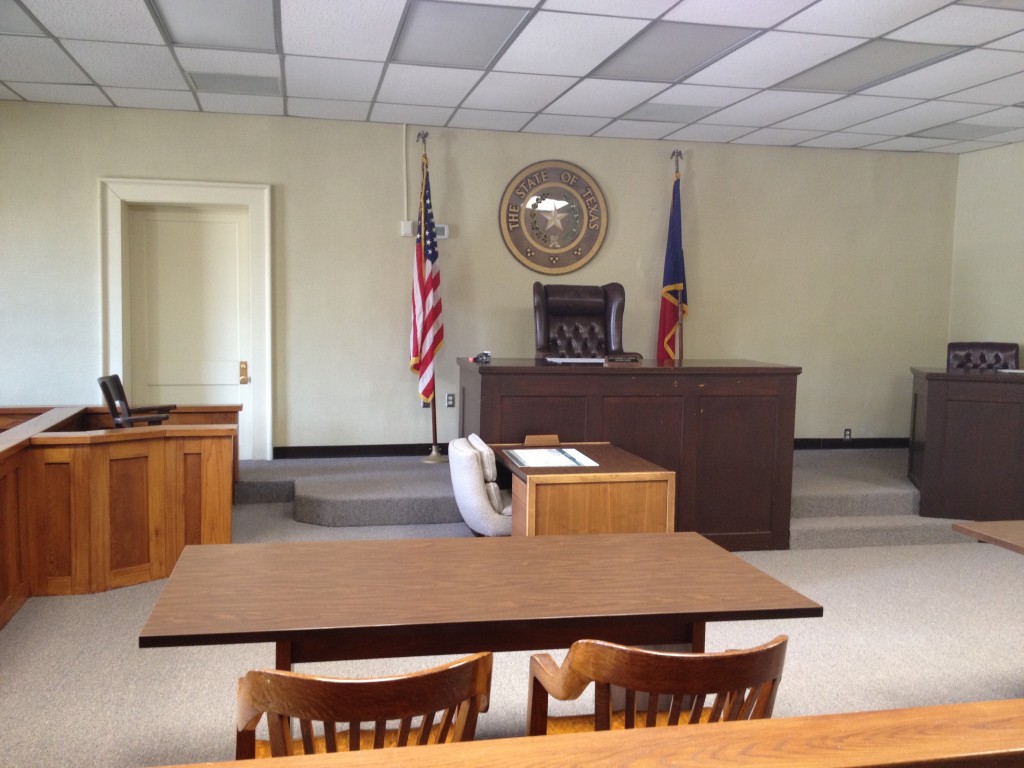 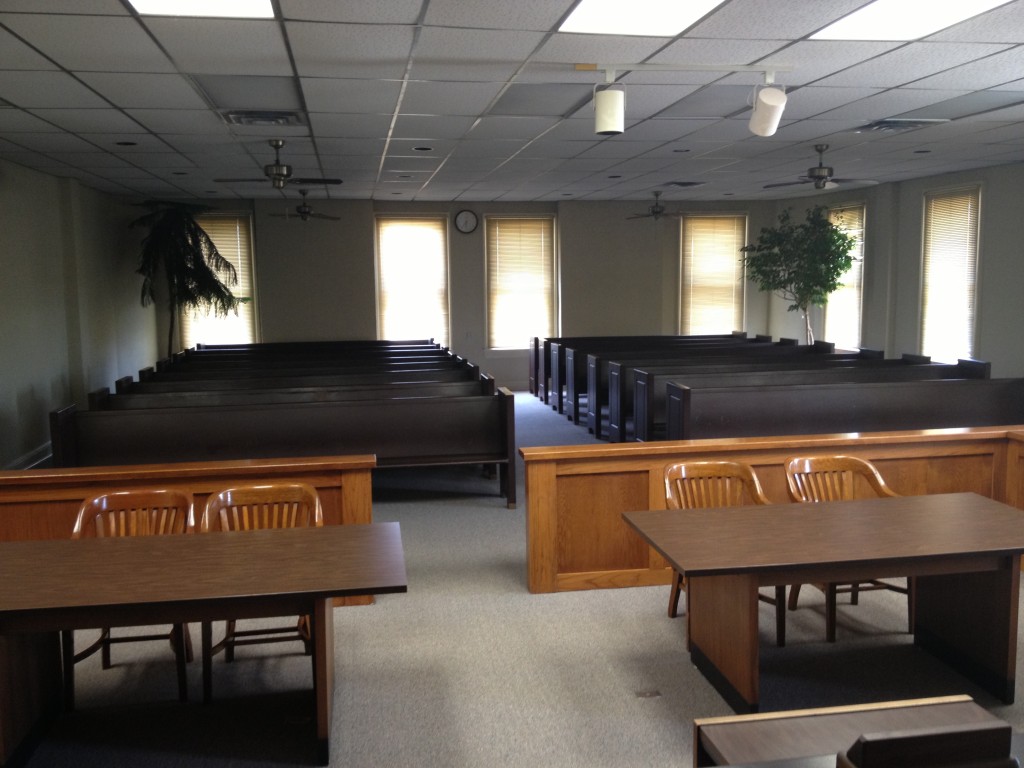 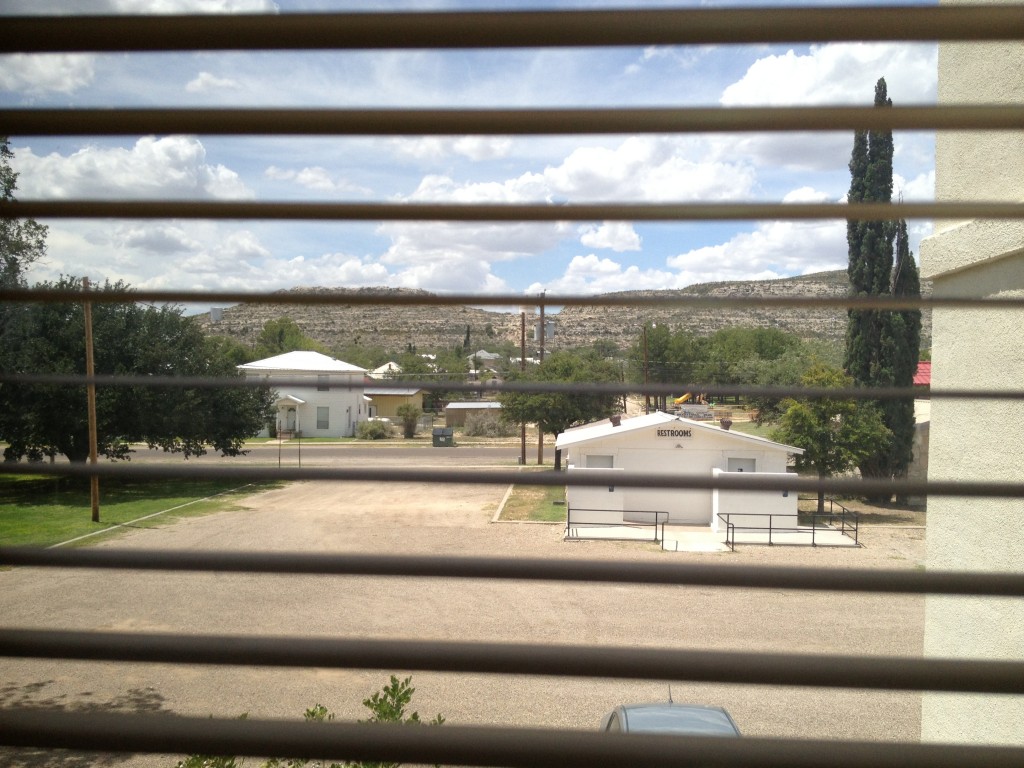 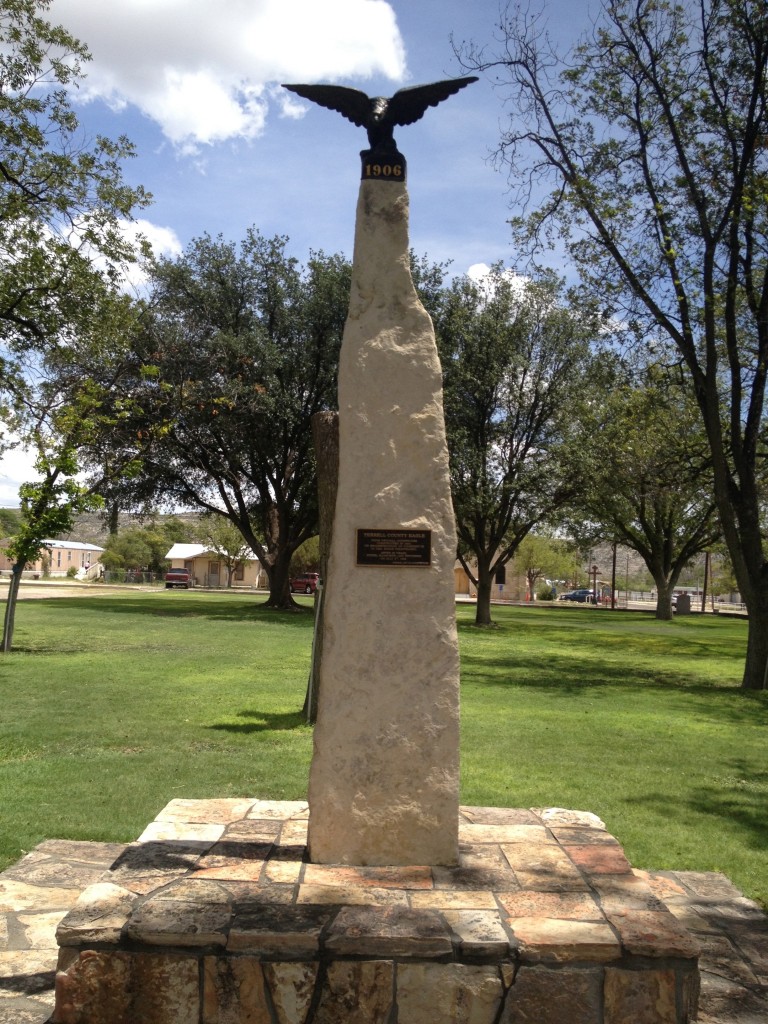 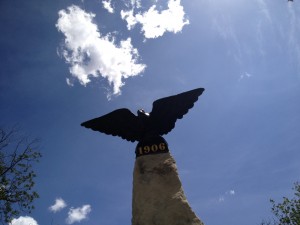 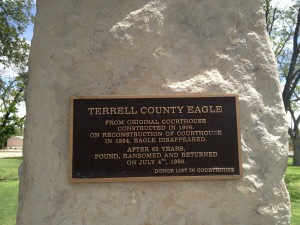 If you look back to the 1906 photo of the original courthouse, you’ll spy the eagle in front of the tower.