“The area that is now Terry County includes lands granted by Mexico to Stephen J. Wilson in 1826 and John Charles Beales in 1832, but the Texas Revolution prevented any settlement on grant lands of West Texas. The land had been a hunting ground for Comanches and other Indians who preyed on the great herds of buffalo in the area, but buffalo hunters depleted the herds during the early 1870s.”

“Terry County was demarked from Bexar County in 1876 and named for Col. Benjamin Franklin Terry, who commanded the Eighth Texas Cavalry (Terry’s Texas Rangers) in the Civil War. It was attached to Young County until 1881, when Throckmorton County took over its judicial affairs. In 1883 administration was vested in Howard County, and in 1889 it was transferred to Martin County.”

“The county began to be settled by whites in the 1890s, when the state offered ten-year leases on school lands for grazing cattle. Terry County was organized in 1904, with Brownfield as its seat of government.”

“Marion V. Brownfield drove his cattle to the plains in 1896, acquired railroad lands, and bought more acreage when the original grazing leases expired between 1901 and 1903. Only three ranchmen actually lived on the six ranches in Terry County in 1900; the other ranching operations were absentee-owned and run by itinerant cowboys. According to the census, only twenty-one people lived in the county in 1890, and only forty-eight lived there in 1900.”

“The county’s transportation network developed slowly between 1900 and 1920. Until a railroad reached Lubbock in 1909 to make it the county’s market center, all freight was brought in from Plainview, Colorado City, or Big Spring over a winding road in Sulphur Draw. It took seven or eight days to make a round trip to Big Spring for supplies.”

“In 1909 Brownfield made a rough auto road through his ranch to Lamesa, and another road was soon constructed to Lubbock. Transportation became easier when a railroad extended its tracks into the county in 1917. For a time Terry County was known as the Egypt of the West, or the Corn Basket of Texas, as 300 to 400 carloads of corn were shipped out annually.”

“By 1991 almost 363,143,000 barrels of crude had been extracted from Terry County lands since 1940. In 1991 Terry County was among the leading cotton counties in Texas, and the oil and gas industry remained crucial to the economy.” 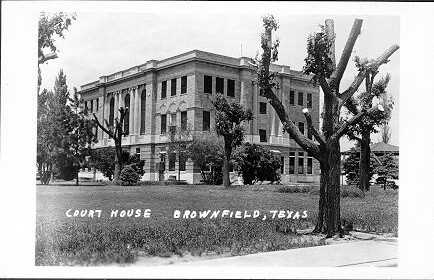 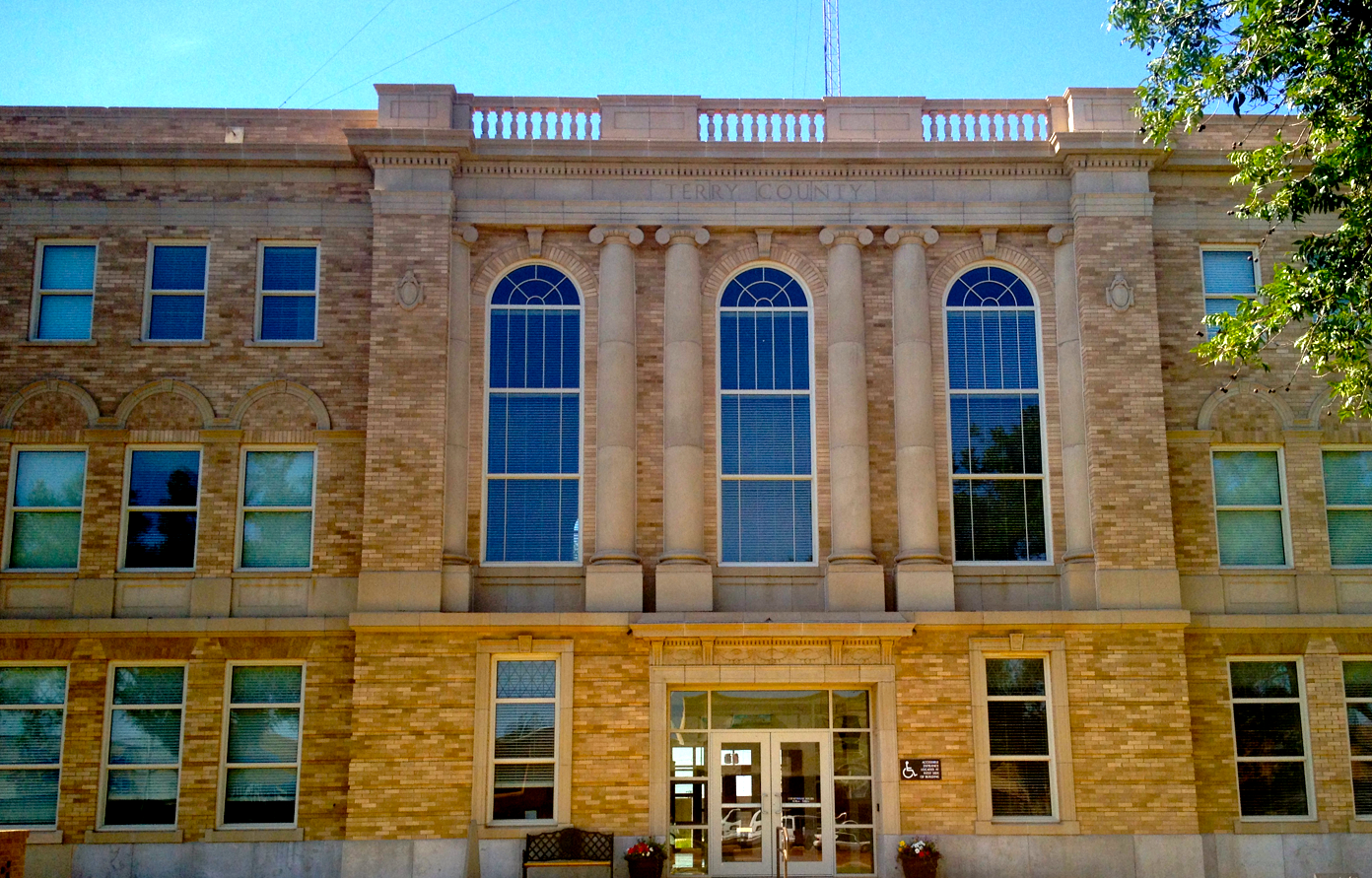 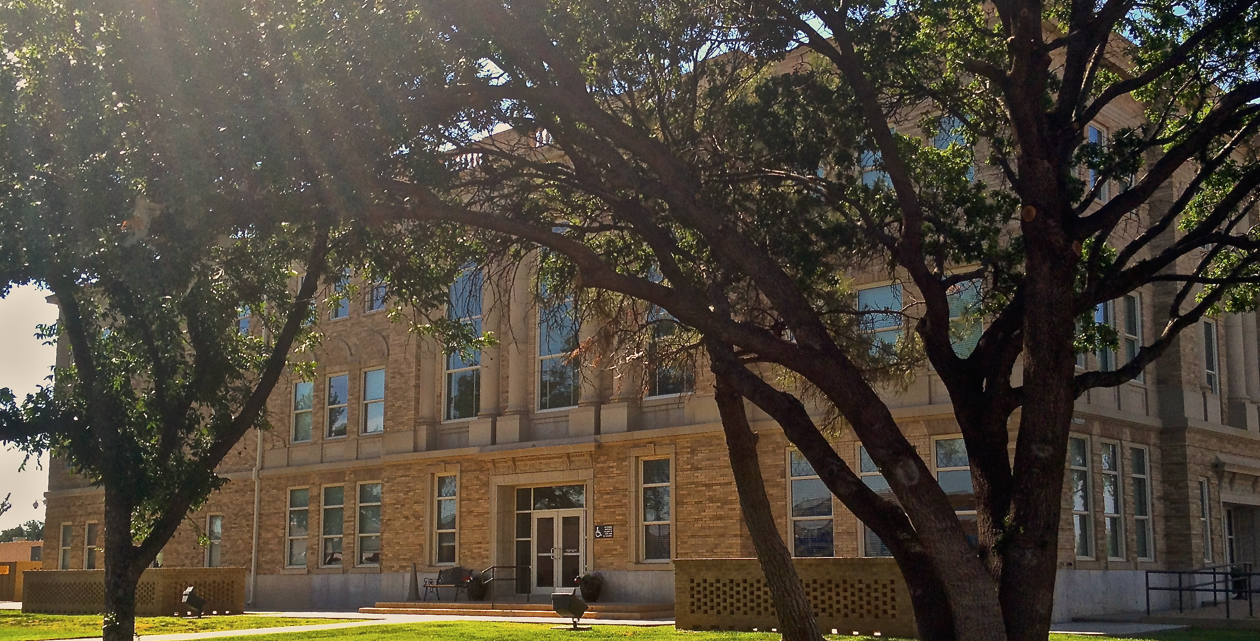 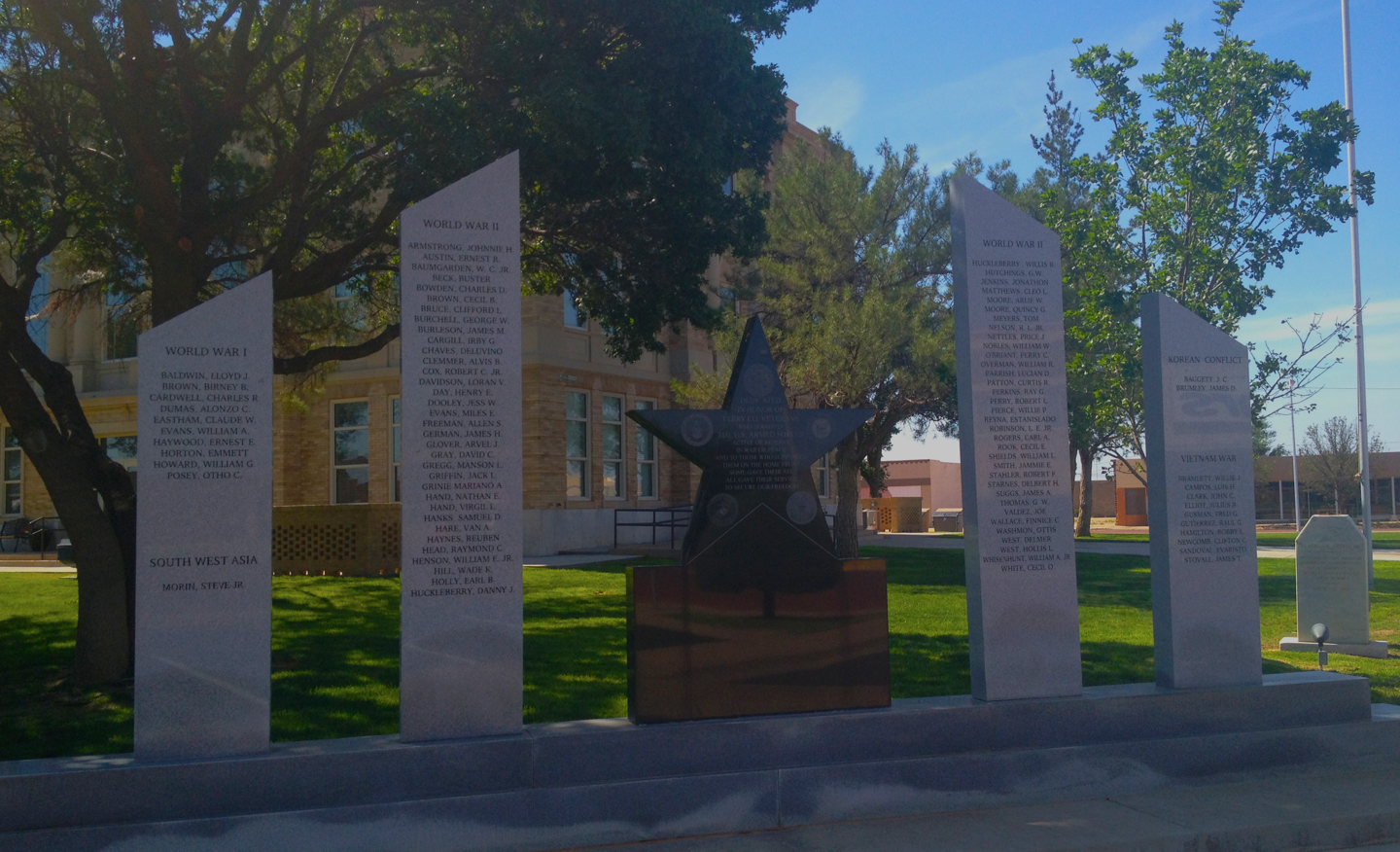 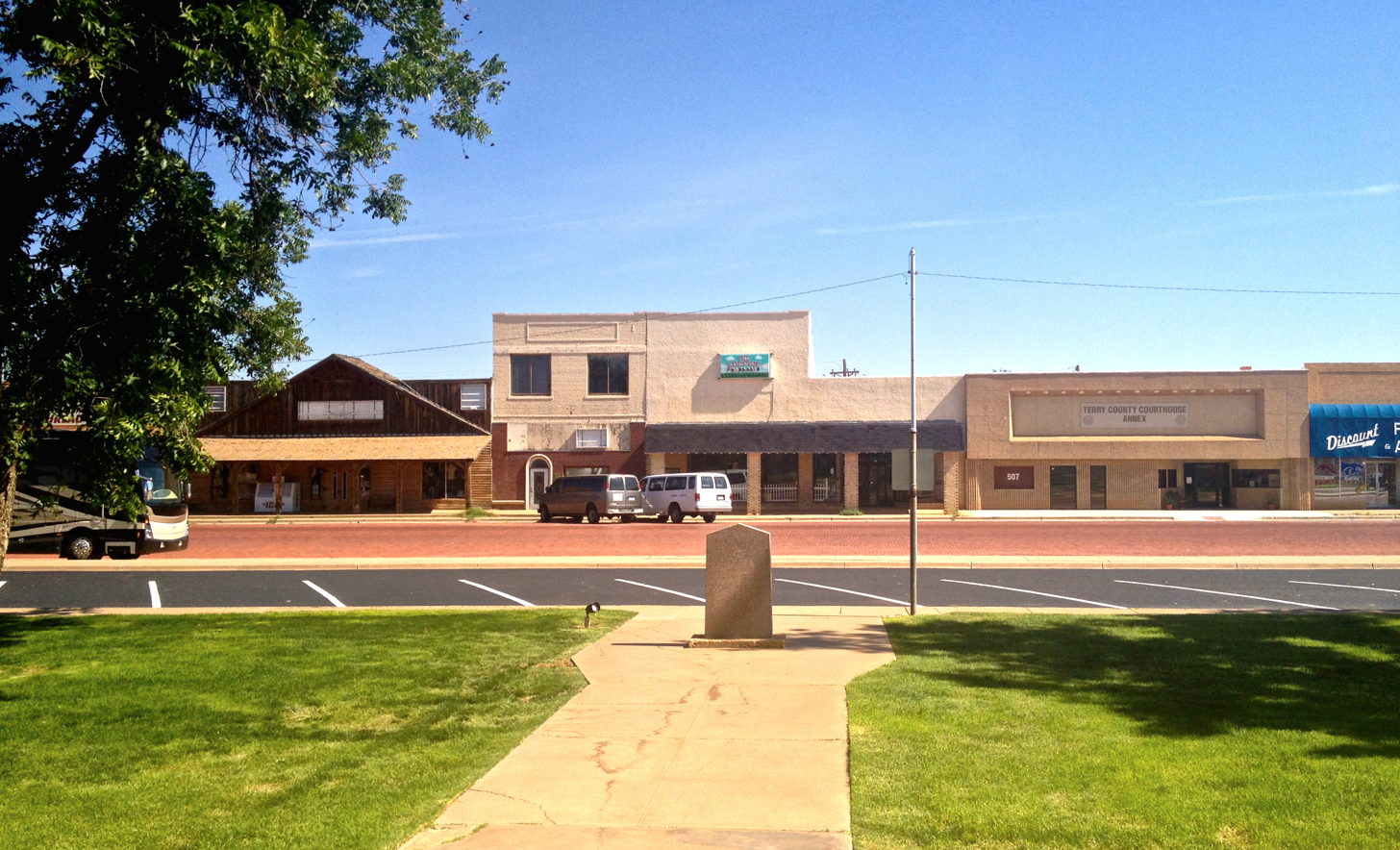 View from the north entrance, looking towards Main Street 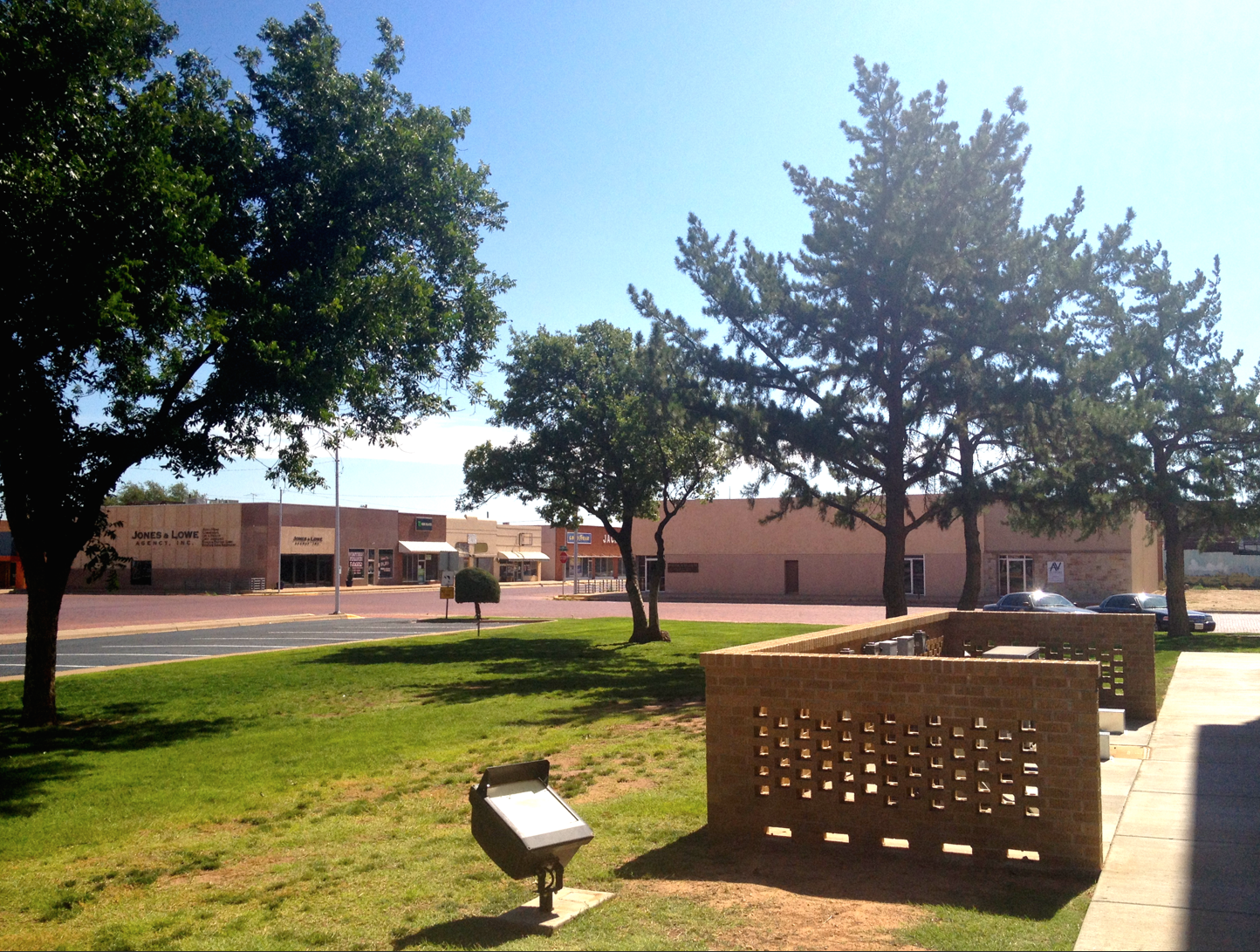 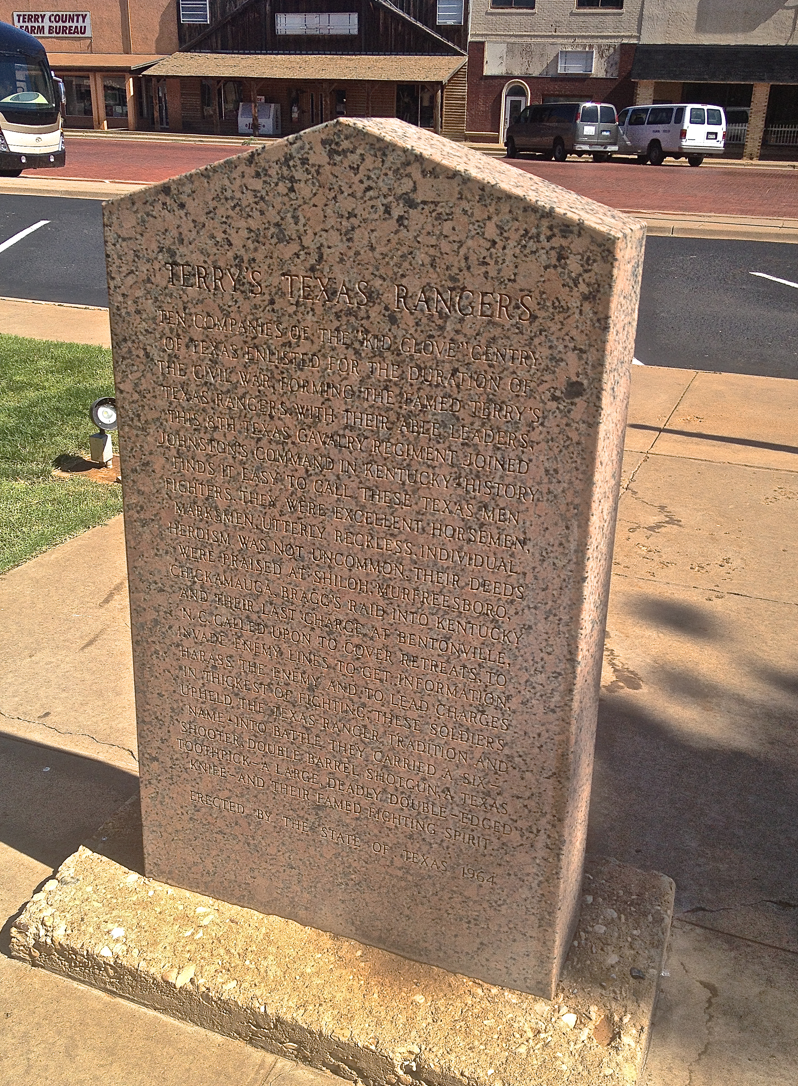 In honor of Terry‘s Texas Rangers