“Walker County encompasses 801 square miles of rolling hills and open prairies in the Piney Woods vegetation area; around 70 percent of the county is blanketed by forests of loblolly, short-leaf and long-leaf pine, and hardwoods. The area rests at the extreme western end of the Coastal Plain region.” 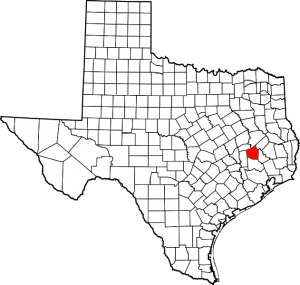 “The area was originally named for Robert J. Walker of Mississippi, who introduced into the United States Congress the resolution for the annexation of Texas; because he was a Unionist during the Civil War, however, in 1863 the state legislature changed the honoree to Samuel H. Walker.”

“Walker County is crossed by the Missouri Pacific Railroad and Interstate Highway 45. Transportation in the area is also facilitated by a series of farm-to-market roads radiating outward from Huntsville.”

“In the early 1830s colonists from the United States arrived in the area. Pleasant Gray and his brother Ephraim established a trading post on the site that eventually became Huntsville, named after Huntsville, Alabama, Pleasant’s former home. In the mid-1830s the brothers conducted a lucrative trade with the neighboring Indians.”

“In the years prior to Texas independence, the area was governed by the Municipality of Washington, which became Washington County during the Texas Revolution. In 1837 the First Congress of the Republic of Texas included the area of present Walker County in Montgomery County when that county was carved from Washington County.”

“Steamboat navigation of the Trinity River spurred the earliest burst of commerce in the county. In 1838 James DeWitt established the port town of Cincinnati, which soon became the leading regional commercial center, partly because it was on the stage road connecting Washington-on-the-Brazos and Nacogdoches.”

“In April 1846 the First Legislature of the new state of Texas established Walker County and designated Huntsville the seat of government.”

“A site for the courthouse was donated by Pleasant Gray and his wife, and Henry Sheets and his spouse provided the property for the jail. The new jail was completed in 1847, and the first courthouse a year later. By 1847 there were 2,695 people living in the area. In 1848 the county became the designated site for what became the Texas State Penitentiary at Huntsville, which began operating in 1849.”

“In 1867 Huntsville was ravaged by an epidemic of yellow fever that touched virtually every family in the city. The people in the county also suffered because the war had seriously disrupted the local economy; farm production had fallen significantly.”

“Racial tensions erupted during Reconstruction. The most dramatic incident occurred in the early 1870s, after Sam Jenkins, a local freedman, was brutally murdered. The killing led to an investigation by Capt. Leander H. McNelly of the State Police in January of 1871. McNelly arrested four suspects, and three were convicted of the crime. Before the judge could pronounce sentence, however, local sympathizers armed the prisoners and a shooting spree erupted in the courtroom. McNelly and another lawman were wounded, and the trio escaped, aided by numerous townspeople; only two citizens were willing to be deputized into a posse. In response, Governor Edmund J. Davis declared martial law in Walker County and ordered a militia unit into the area. The county remained under martial law for sixty days.”

“Logging and cotton farming [were] the mainstays of Walker County between 1900 and 1930, but partly because of the boll weevil, cotton farming in the area became less productive after 1900 even though the number of acres devoted to the crop expanded significantly.”

“A large portion of the county is owned by two public agencies, the state prison system and the National Forest Service. Numerous prison farms are operated by the prison system. The economy benefits from the presence of Sam Houston State University.”

“An increasingly important factor in the growth of Walker County is the tremendous expansion of Houston. As this city continues to sprawl northward, more Walker County residents benefit from employment opportunities available in its metropolitan area. Huntsville residents often work in Houston offices, commuting from their Walker County homes. Huntsville is home to the Sam Houston Memorial Museum and hosts a number of annual events, including the Walker County Fair in July.”

Huntsville was the hometown of Sam Houston. The town honors him with a memorial museum, a large memorial on his grave, and a massive statue in his likeness just off the Interstate. His homestead was also preserved and converted into a park. Seeing most of this was a secondary goal when I visited Walker County.

Eugene Heiner designed this 1888 courthouse that served as the fourth for the county. Its Heiner characteristics arguably made it the most memorable Huntsville has had. Like several others, it met its demise in a blaze. After it burned in 1968, the remains were razed to make way for the current courthouse. It was completed in 1970. 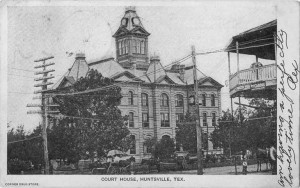 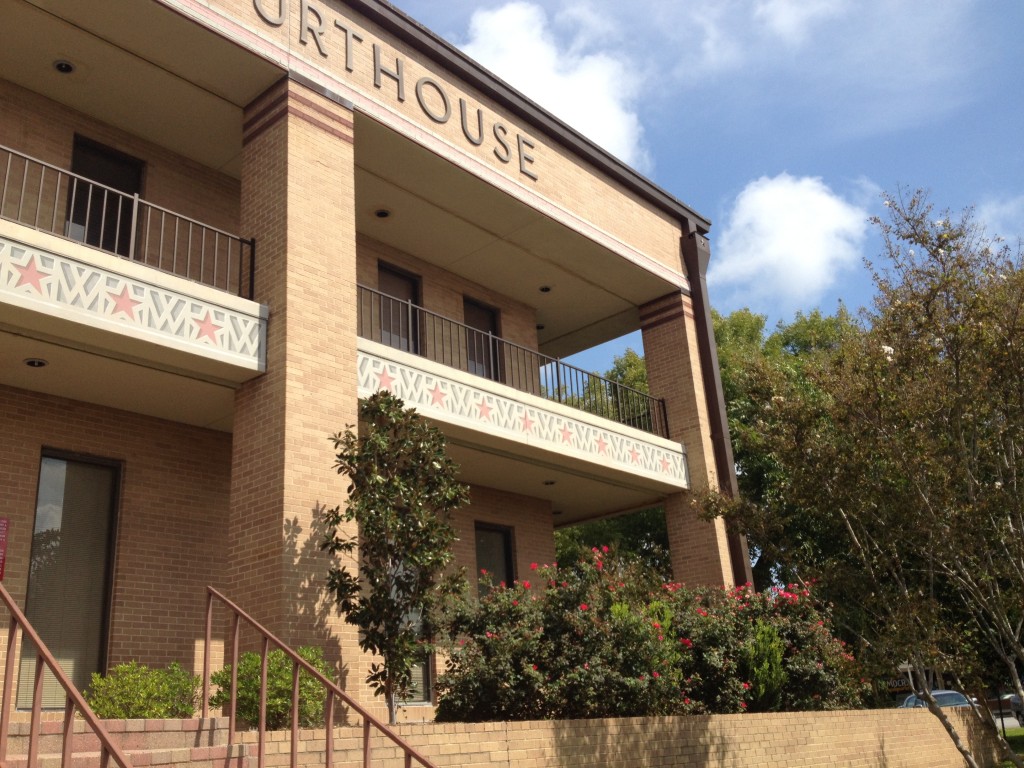 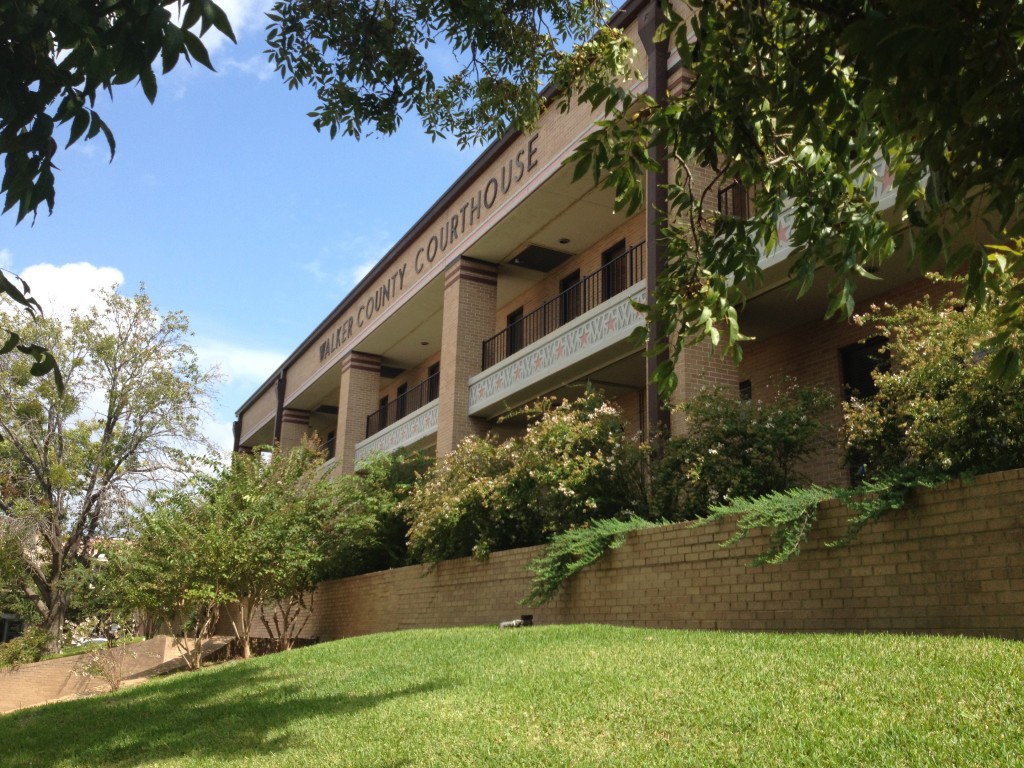 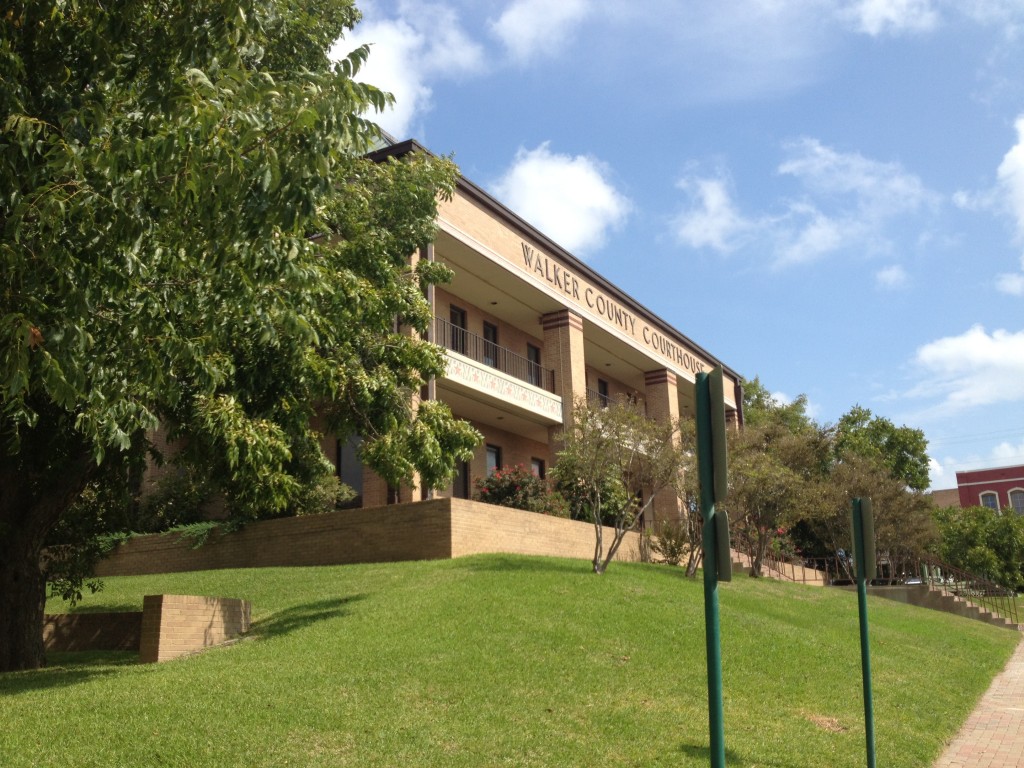 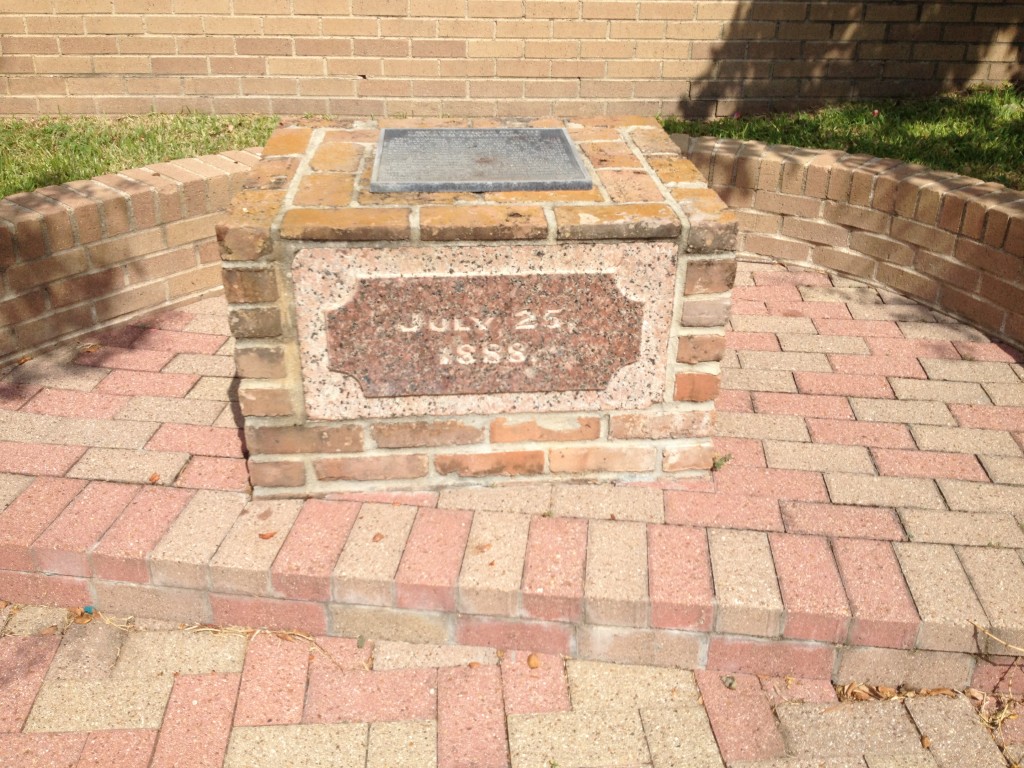 The 1888 courthouse cornerstone is exhibited on the southern side of the courthouse. 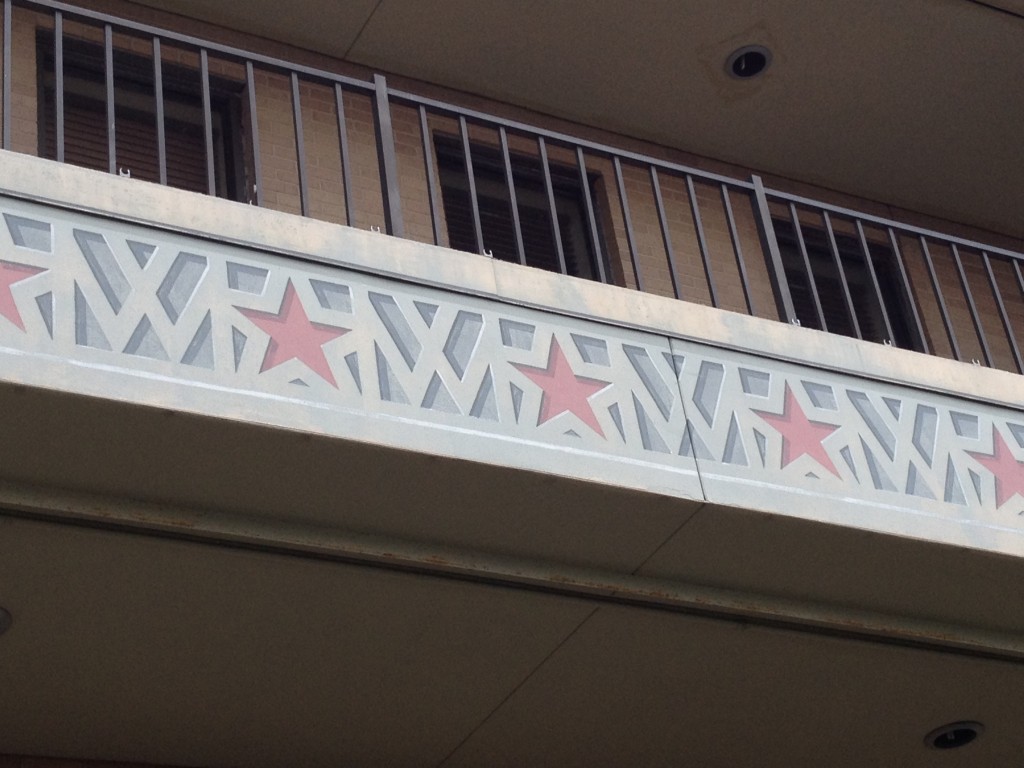 The unique W most certainly stands for Walker. 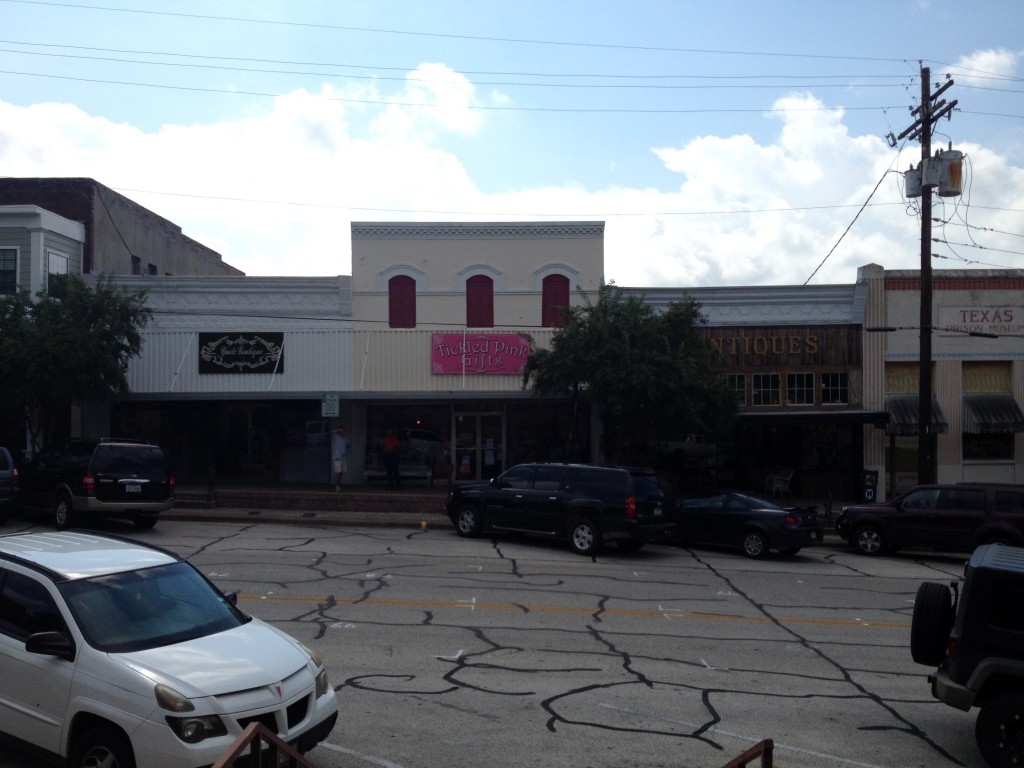 Across from the southern entrance of the courthouse (12th Street) 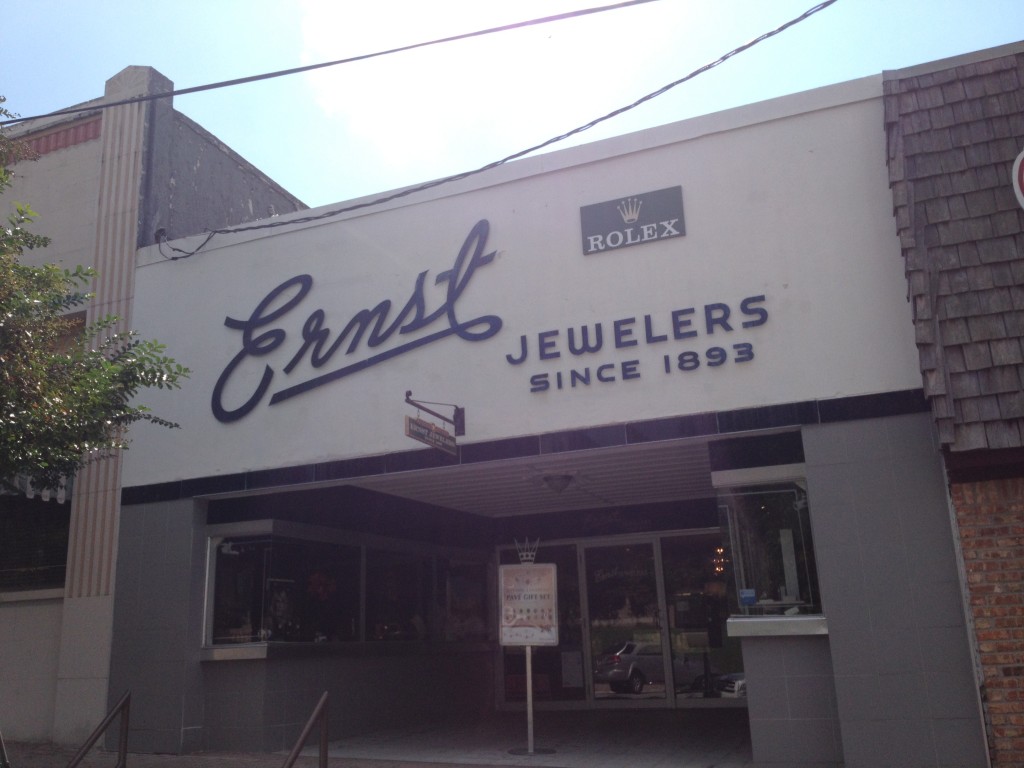 The Walls Unit (part of the prison system)

One of Sam Houston’s preserved homes 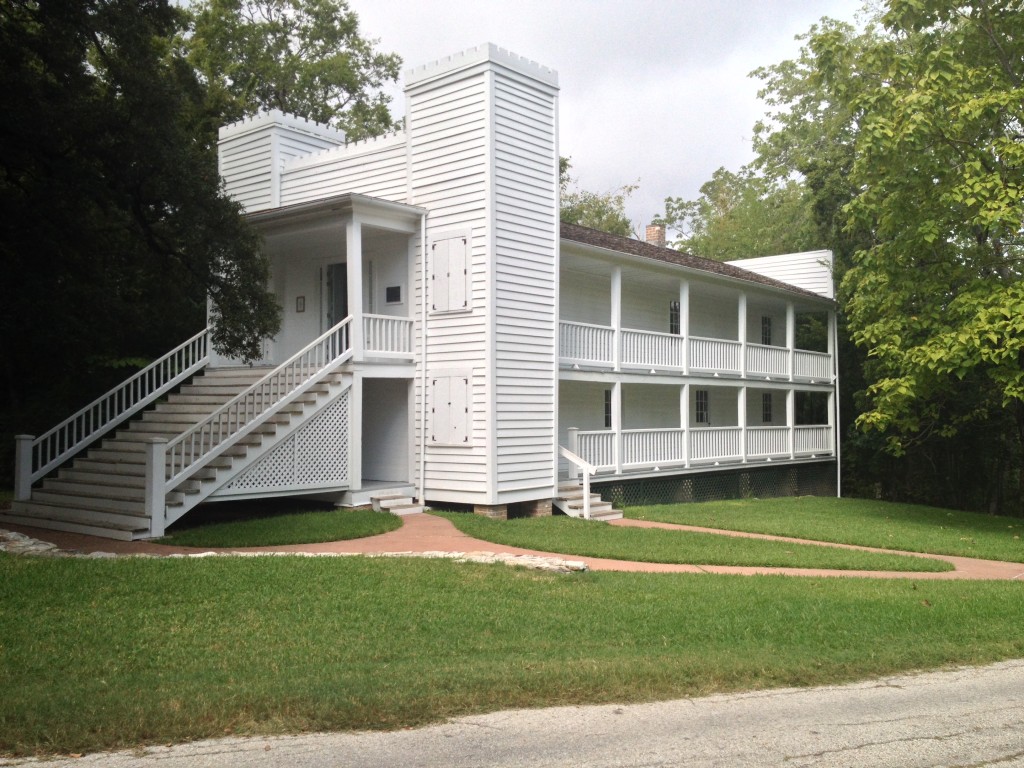 The architecturally unique “Steamboat House” was Houston’s final home. It was here that he died and here that hosted his funeral. While this is the original building, it does not rest on its original site. It was moved to Sam Houston Park (location of his other home) in 1936, the centennial of Texas independence.

I presume this is at least a semi-authentic representation of what Sam Houston’s funeral would have looked like inside the Steamboat House. The thermostat is not part of this estimate. 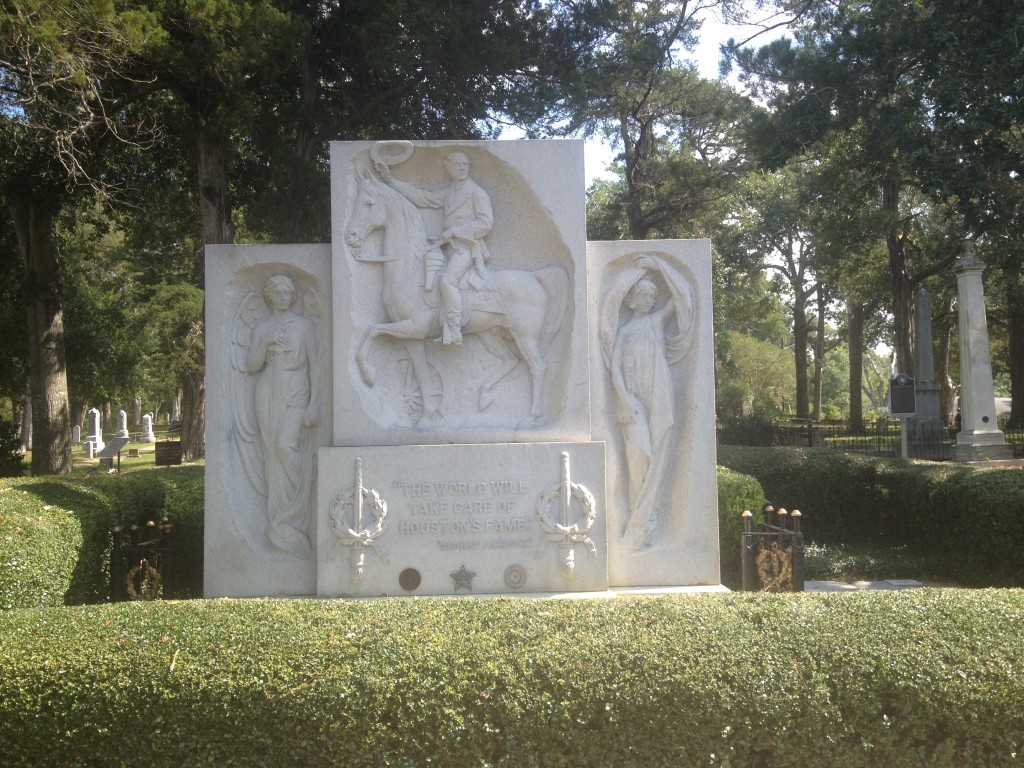 Andrew Jackson said, “The world will take care of Houston’s fame.” Huntsville is not the whole world, but it’s done a nice job.