“[Wise C]ounty, comprising 922 square miles, is divided from north to south between the Eastern Grand Prairie and the Western Cross Timbers regions of Texas. The topography of the eastern section consists of gently rolling hills with sandy loam topsoils and brick clay subsoils. Central Wise County has a combination of flat and undulating terrain; its waxy, light-colored surface soil covers deep layers of red clay.”

“The first known inhabitants of Wise County were probably Wichita Indians, a nomadic plains group that depended upon the http://254texascourthouses.com/best-time-to-go-to-casino/ for food and other necessities. In 1540, when the Coronado expedition came through the area east of the site of present Decatur, there were several Indian villages between the Trinity and Red rivers. The Wichita period ended around 1835, as various Caddo Indian groups filtered into the region.”

“At the time that the first white settlers came to the area, one village of approximately sixty-five Delaware Indians led by Jim Ned remained in Wise County. Jim Ned and his peaceful band befriended the whites, and various hills, streams, and communities were named after the Indian leader. Hostile groups of Kichai Indians also lived in the area near Bridgeport during the period, and they raided white communities in Fannin County. Generals Edward H. Tarrant and James Smith led expeditions against them during the 1840s and early 1850s. By 1855 the permanent Indian settlements had moved to reservations in West Texas.”

“The history of white settlement in Wise County began with Sam Woody, who moved to Deep Creek (then in Cooke County) in 1854. His original log cabin remains as a historic site. Many other settlers, eager to take advantage of the state preemption grants of 160 acres of land, followed Woody into the area. District surveyors from Cooke County in the north and Denton County to the east mapped out the area, most of which was drawn from Cooke County. Wise County was officially established by legislative act on January 23, 1856, and was named in honor of Henry A. Wise, a United States Congressman from Virginia, who, during the 1840s, supported the annexation of Texas.”

“The county seat, Decatur (originally named Taylorsville), was selected by a countywide election and, though challenged after the courthouse burned in 1895, has remained the seat of government to the present. The majority of Wise County settlers were immigrants from southern states, though only fifty-three of the county’s 3,160 white residents owned slaves in 1860.”

“During the antebellum period Decatur was a stop on the Butterfield Overland Mail route from St. Louis, Missouri, to San Francisco, California. A government telegraph line also connected the county with larger population centers. Between 1866 and 1886 the Eastern Cattle Trail to Abilene, Kansas, crossed Wise County east of Decatur. The coming of the railroads eventually provided a more convenient and cheaper means of transportation for crops and livestock.”

“The population increased steadily and reached the highest point in county history in 1900 at a total of 27,116. A community of Hispanics was brought in to work in the coal mines, and thus another ethnic dimension was added to the population. Bridgeport’s large lignite coal reserves supplied fuel for most of the region until 1910, when the Lone Star Gas Company offered residents an alternative energy source with the completion of a natural gas pipeline.”

“The Great Depression and World War II accelerated the decline of the population and the economy, a trend that did not halt until the 1960s. The number of farms was reduced from 3,157 in 1920 to 2,490 in 1940, the number of people living in Wise County fell from 23,363 in 1920 to 19,178 in 1940, and the number of industries was reduced from twenty-three to seven during the period. Low prices for livestock and crops led to widespread unemployment; in 1930 only 4 percent of the labor force was out of work, but by 1940 the percentage had increased to 18.8.”

“It was not until the 1960s that a reversal of earlier trends began. Between 1960 and 1985 the number of people in Wise County increased by approximately 10,000; by 1990 there were 34,679 people living there. The number of industries in the county grew correspondingly during this period, while the farm statistics remained fairly stable. In the early 1980s most of the inhabitants (70 percent) still lived in rural communities, and 79 percent of the land was devoted to farming and ranching.”

I was the guest of Wise County and Decatur on January 8, 2011 and returned to rephotograph the courthouse on May 17, 2014. 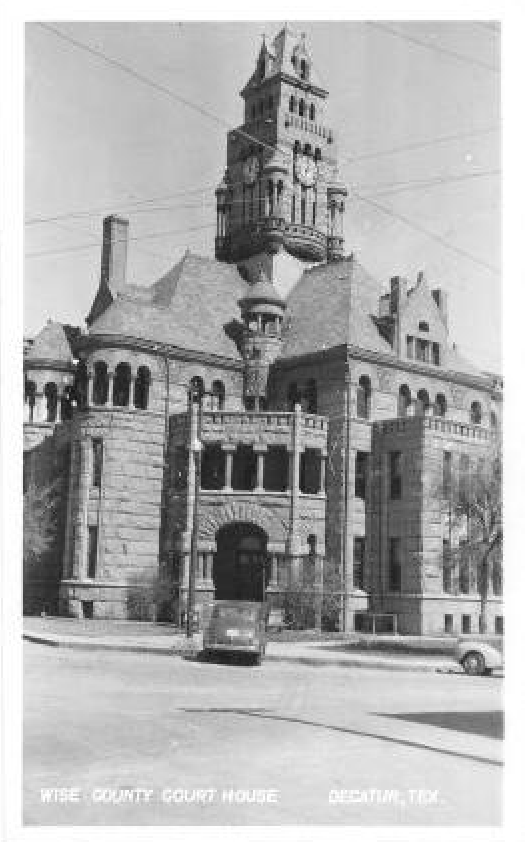 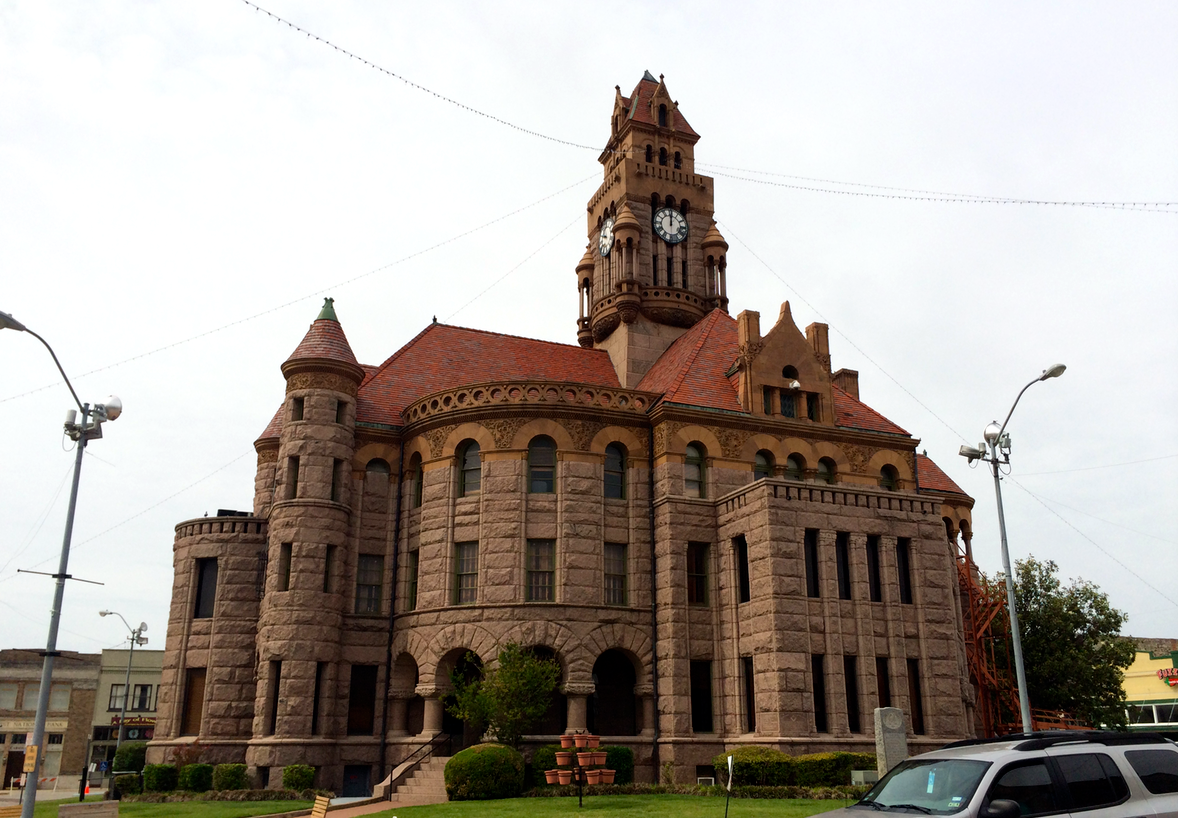 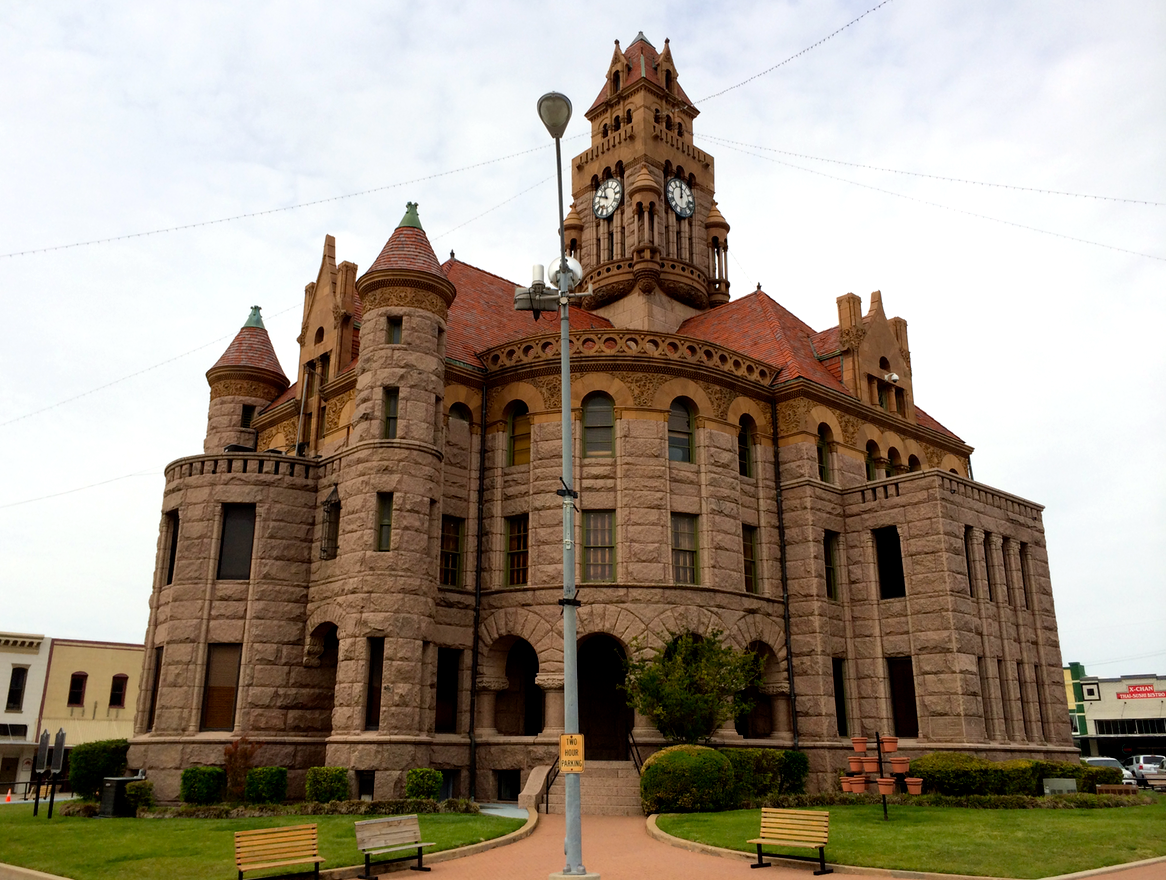 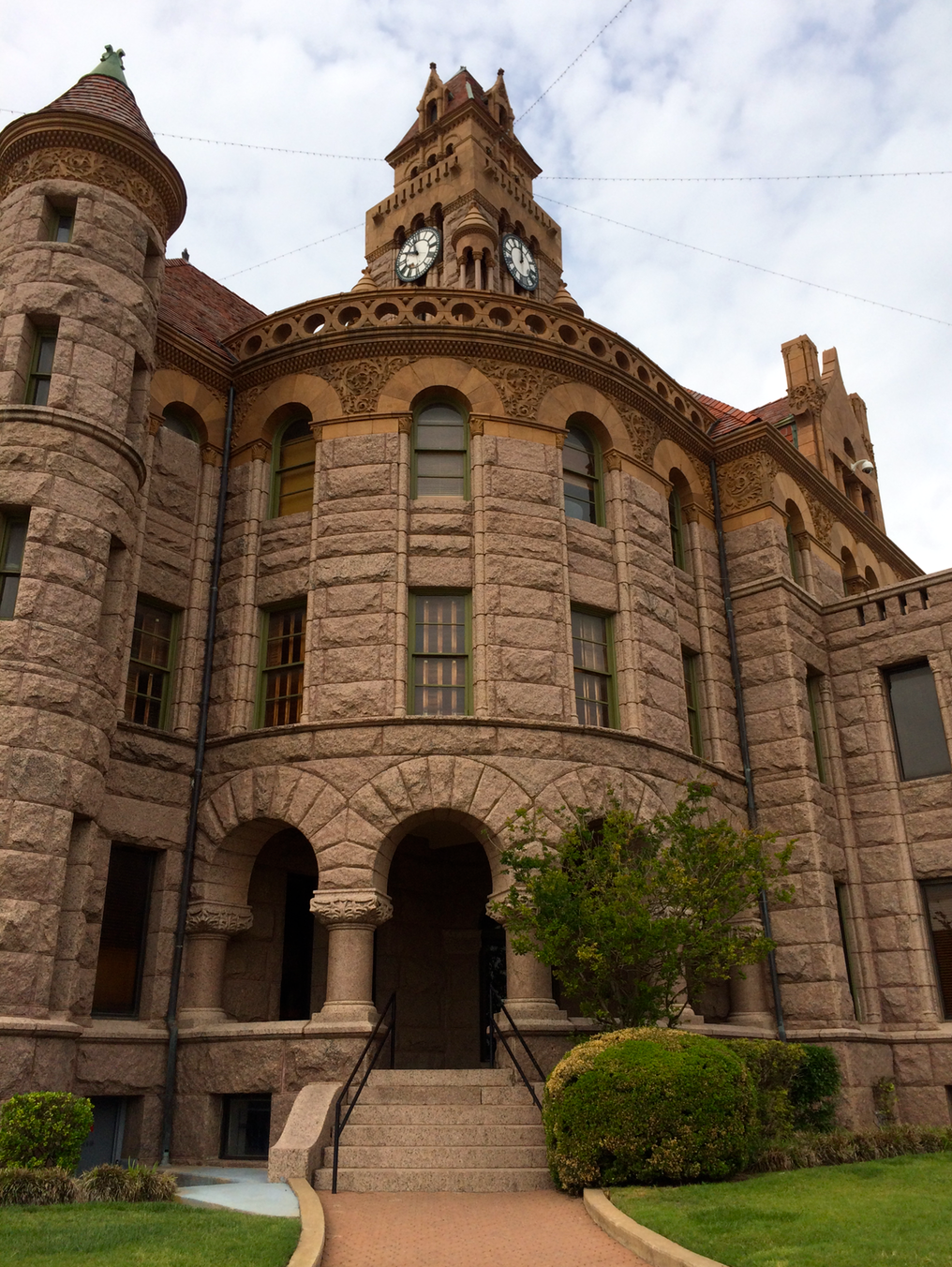 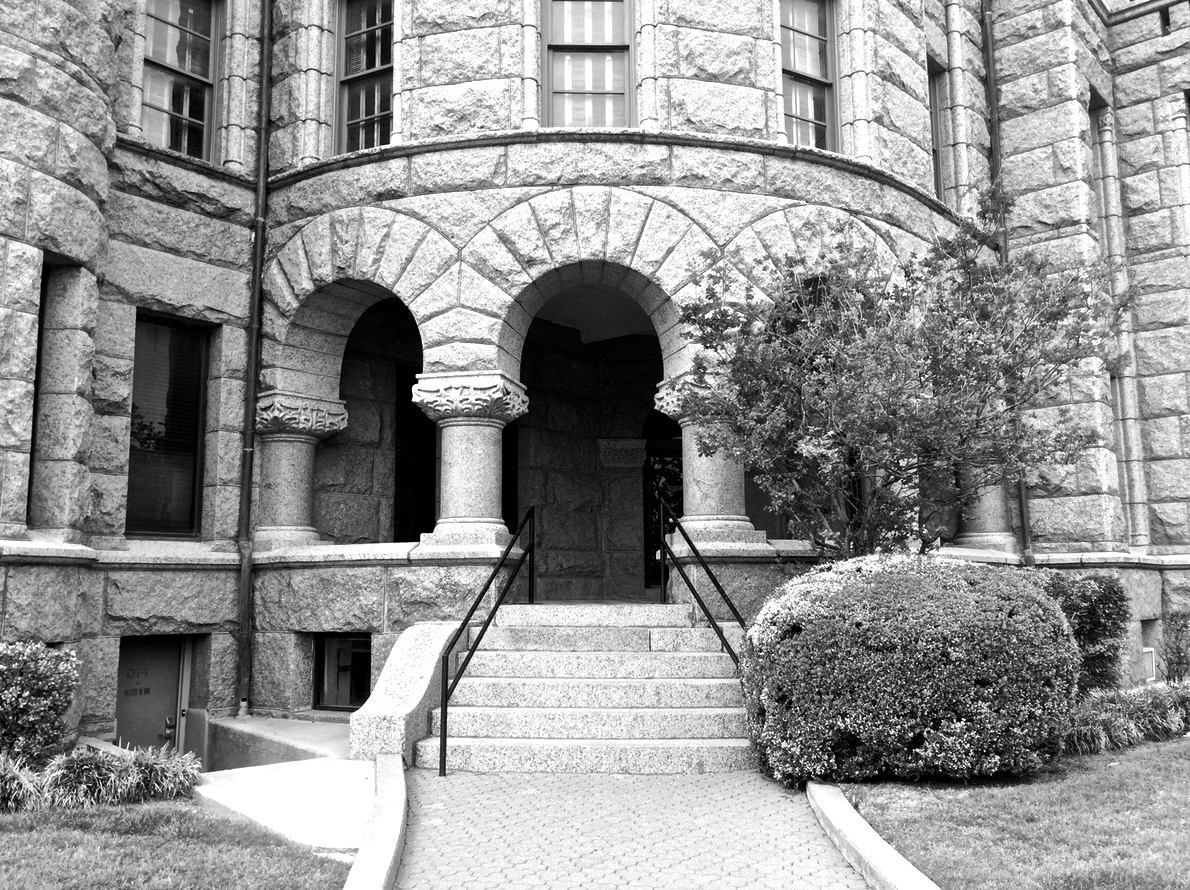 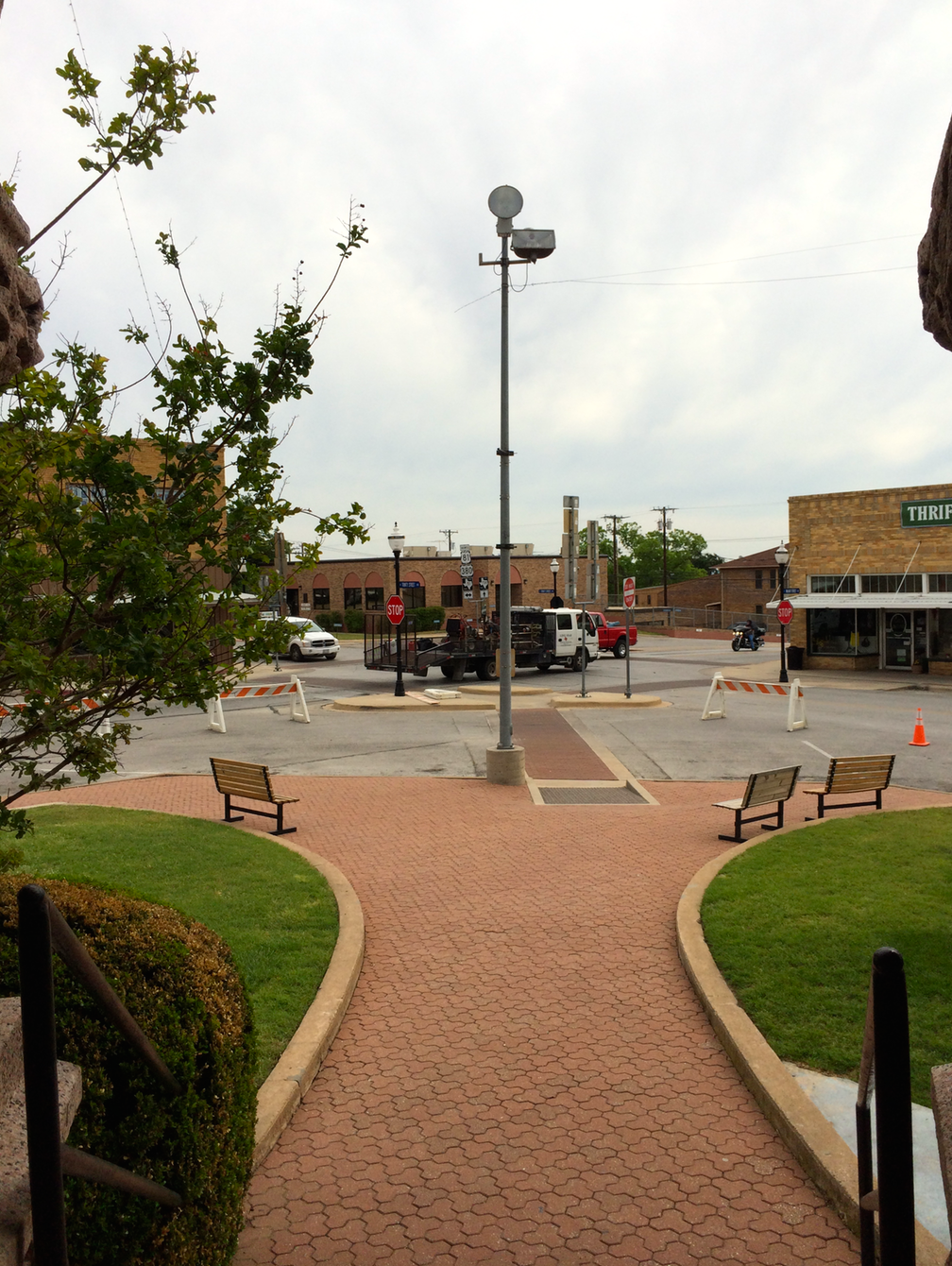 The view from the northeast corner, looking towards the intersection of Trinity and Walnut 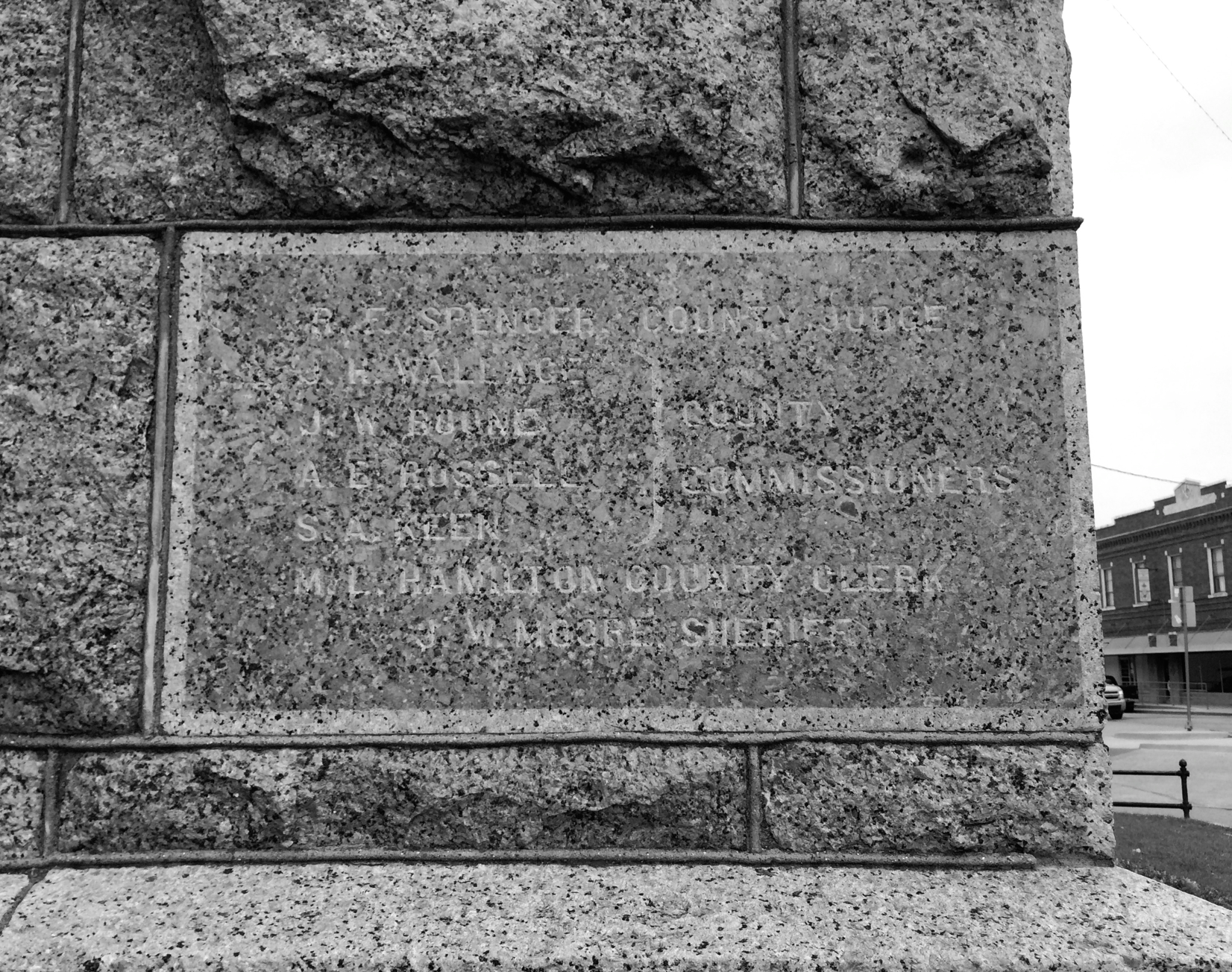 The cornerstone is located near the northeast entrance. 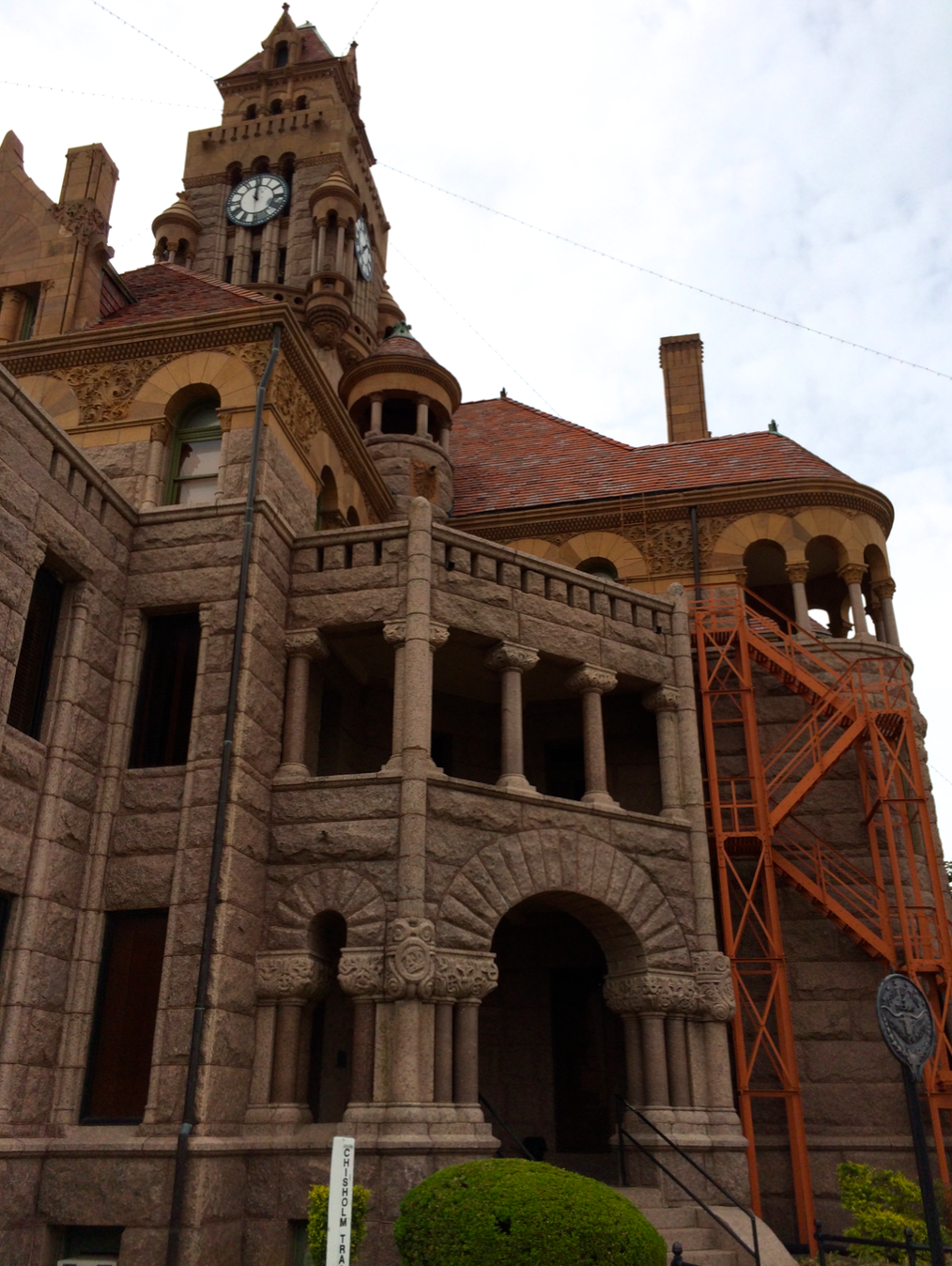 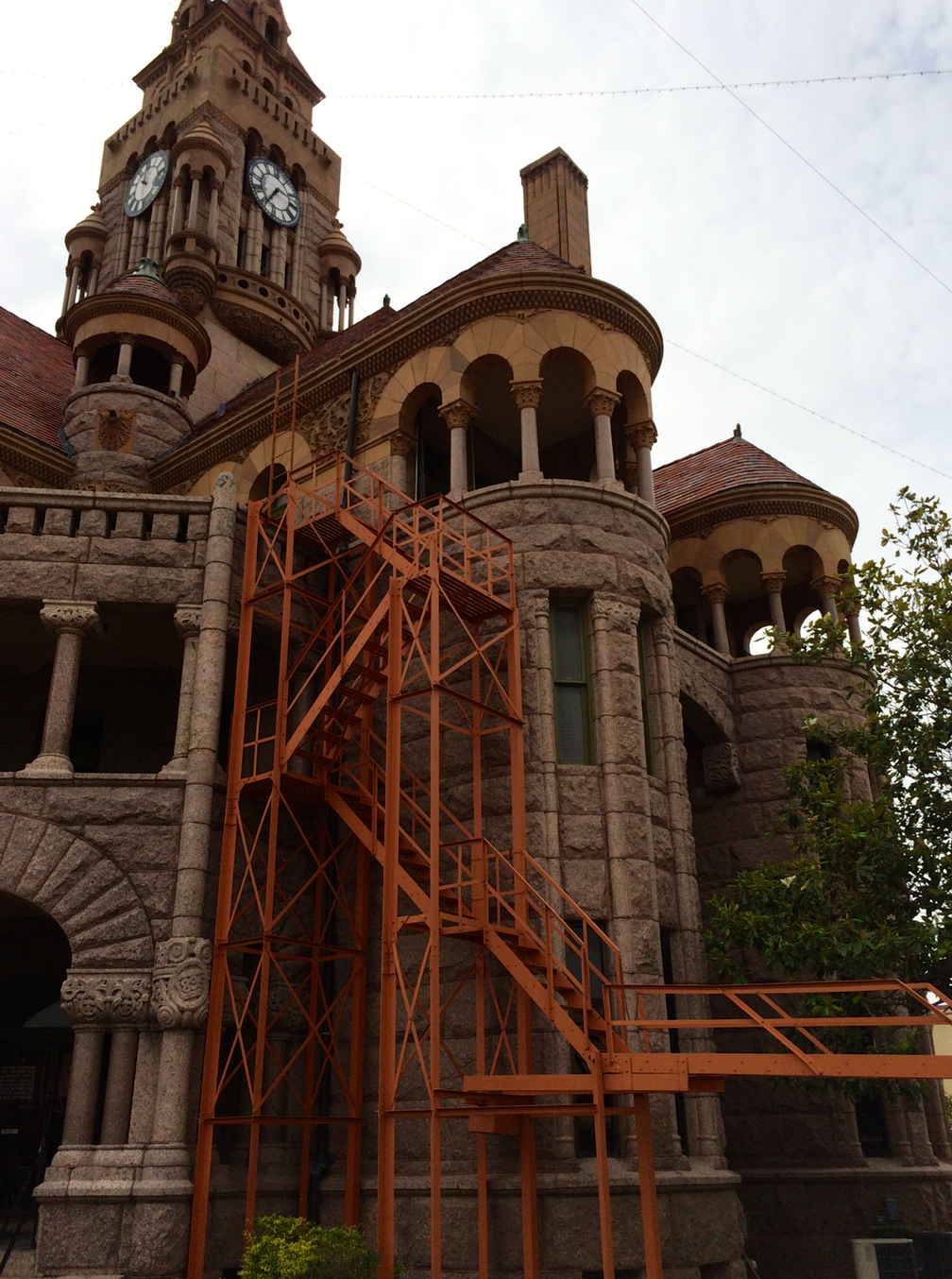 An orange eyesore, otherwise known as a permanent fire escape, is installed on the northwest corner. 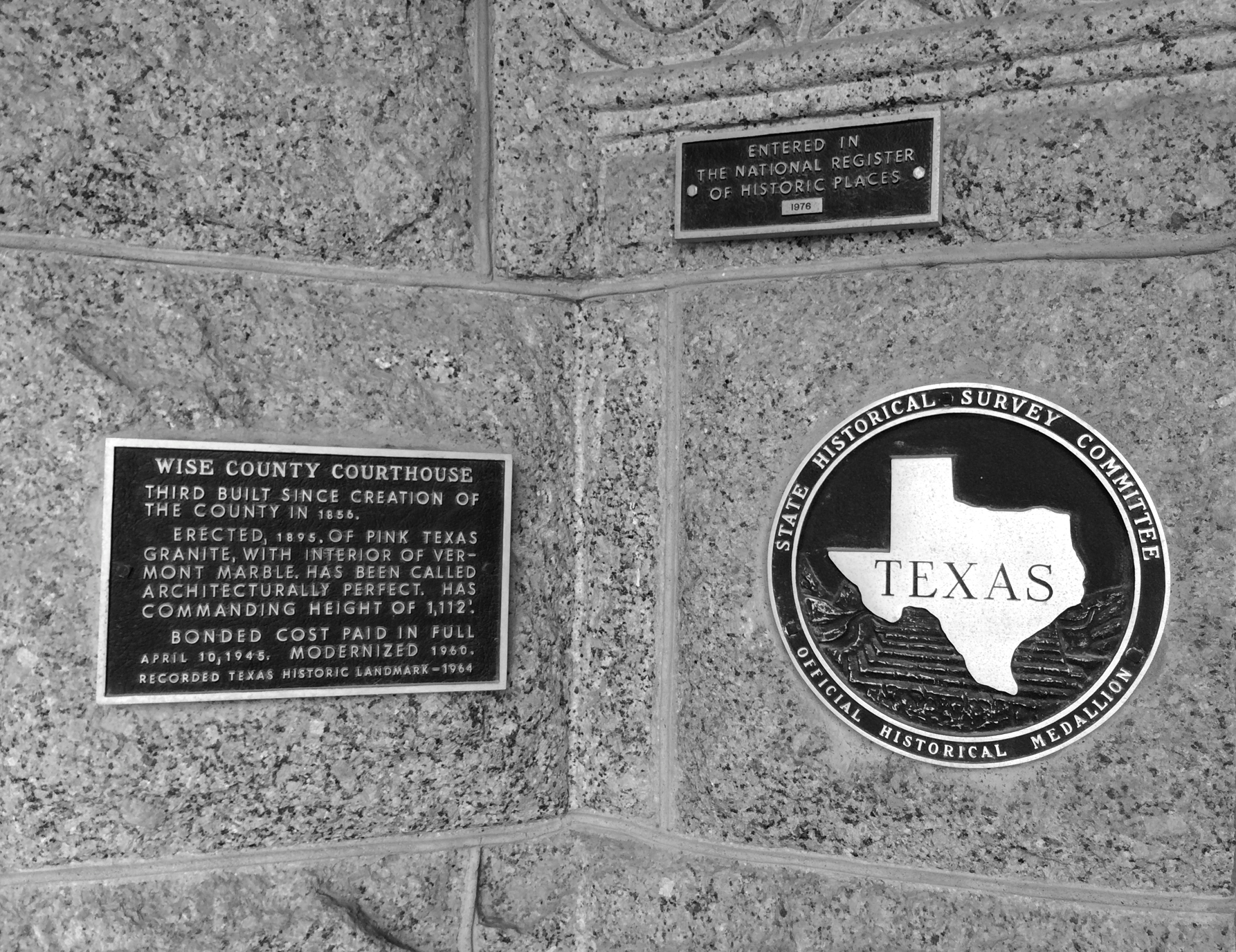 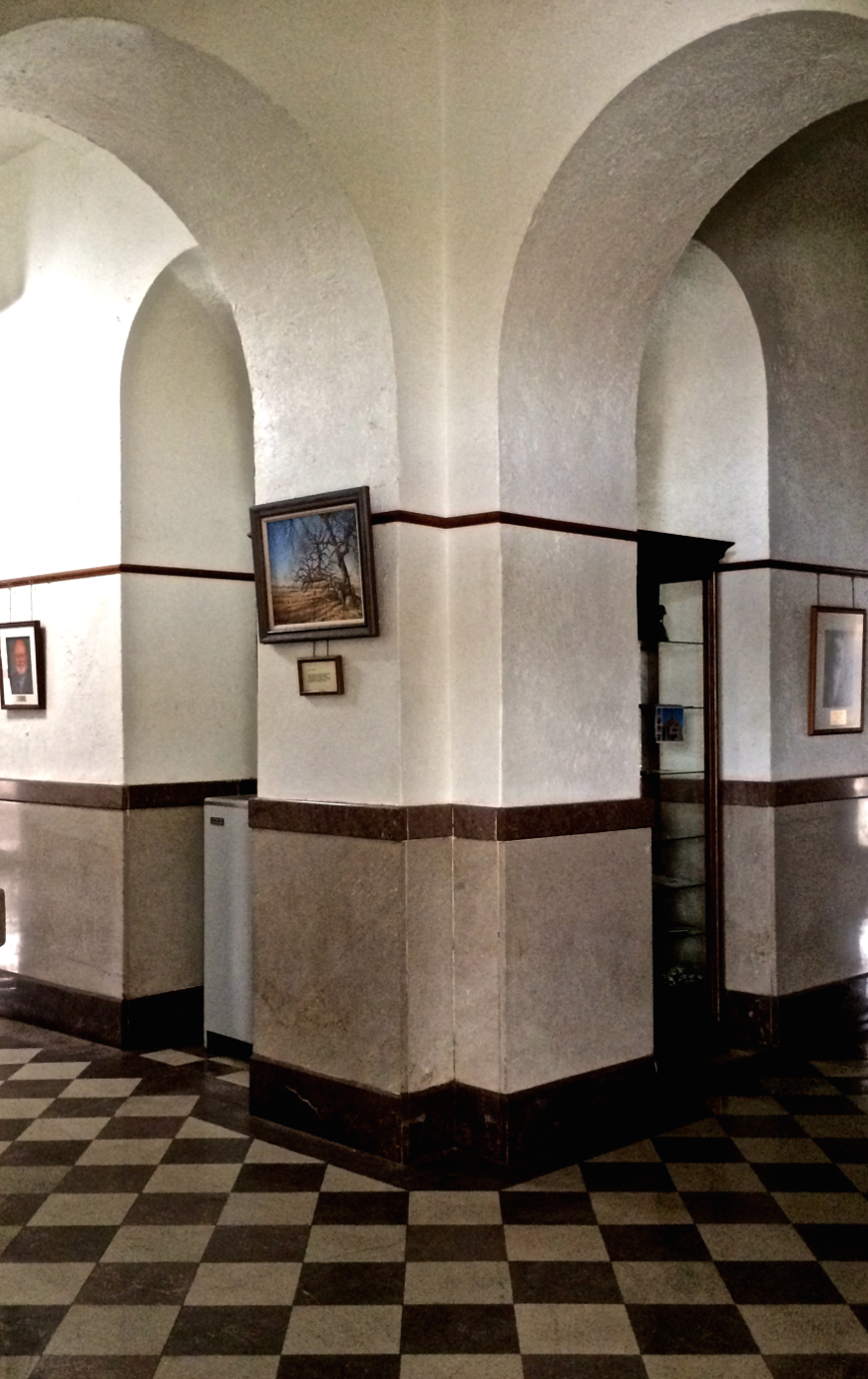 A portion of the interior 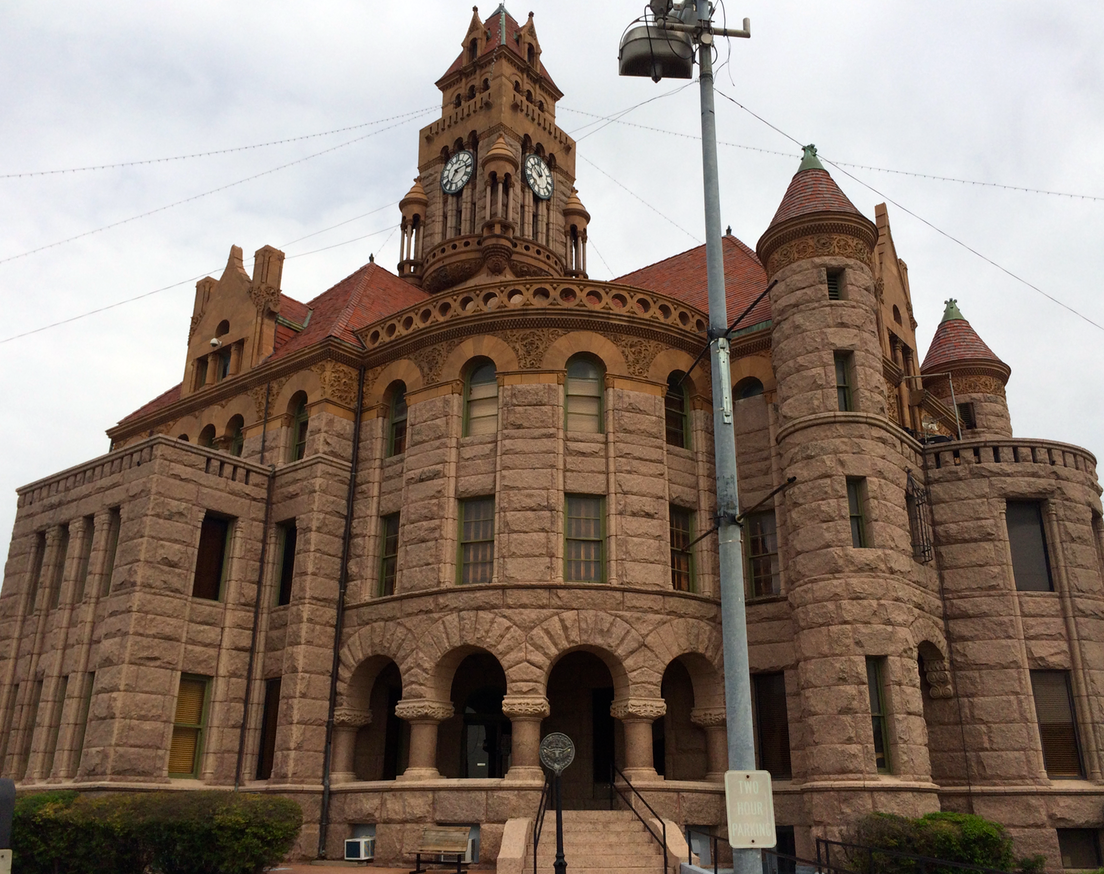 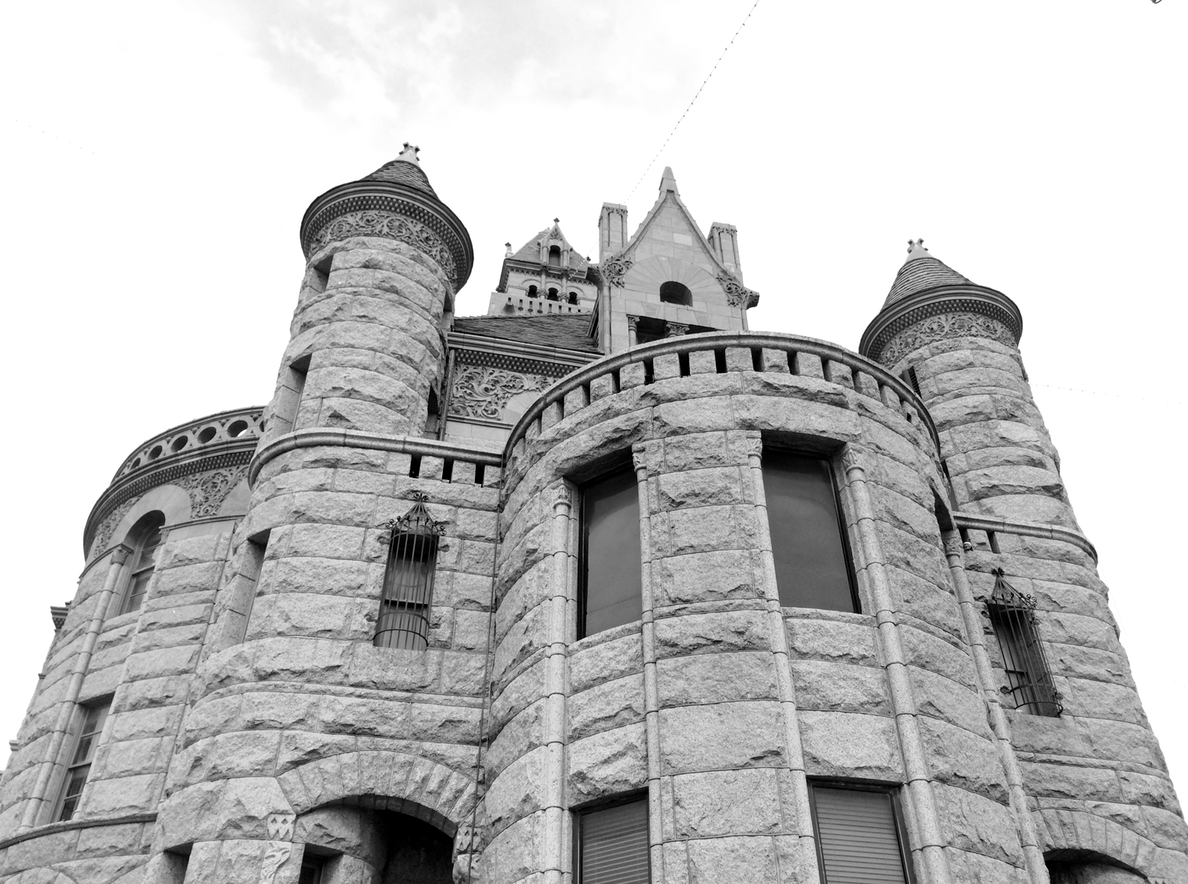 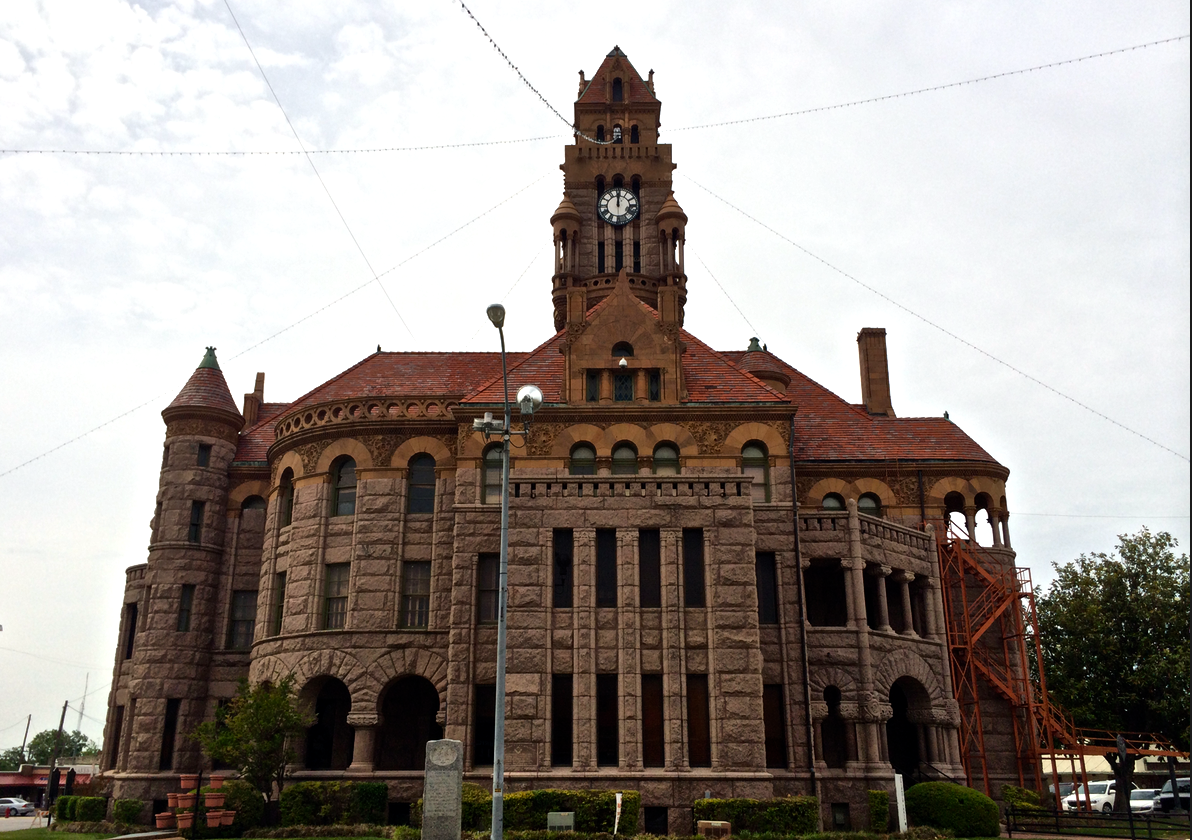 The courthouse’s northern side 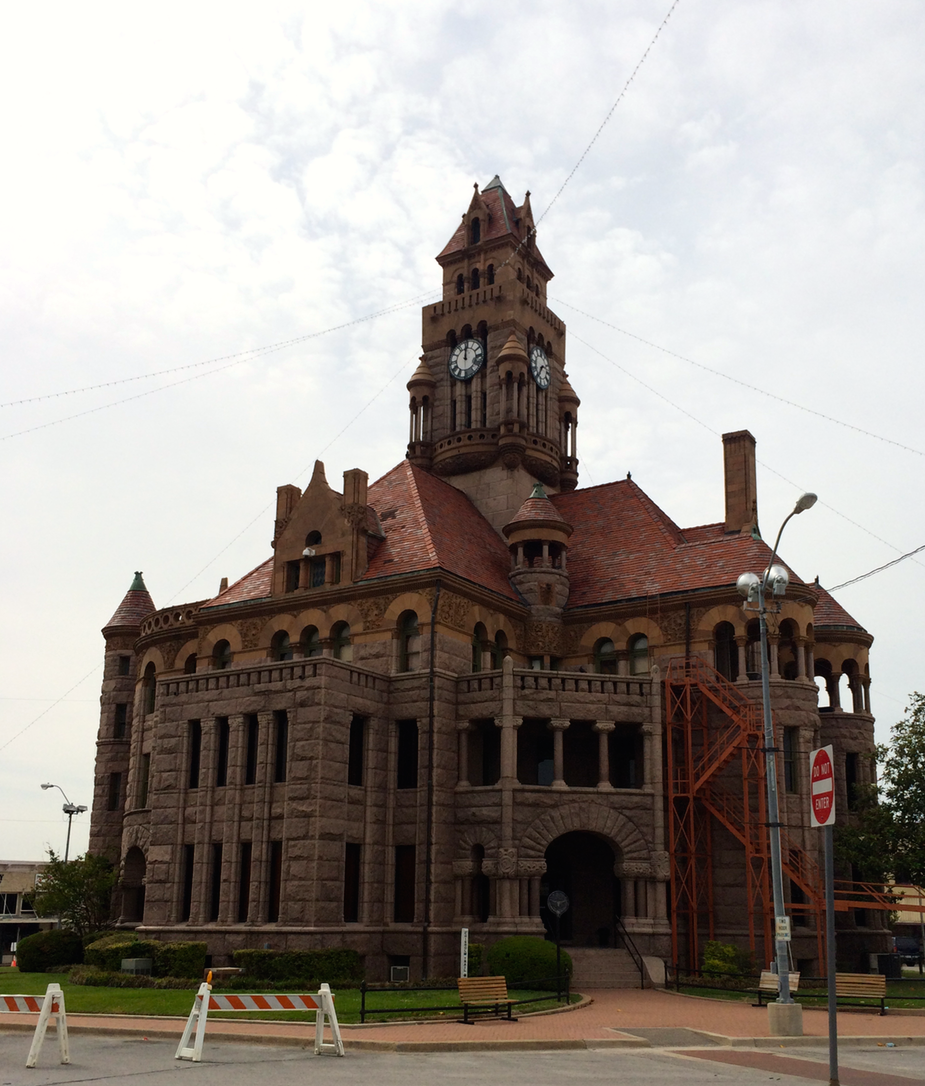 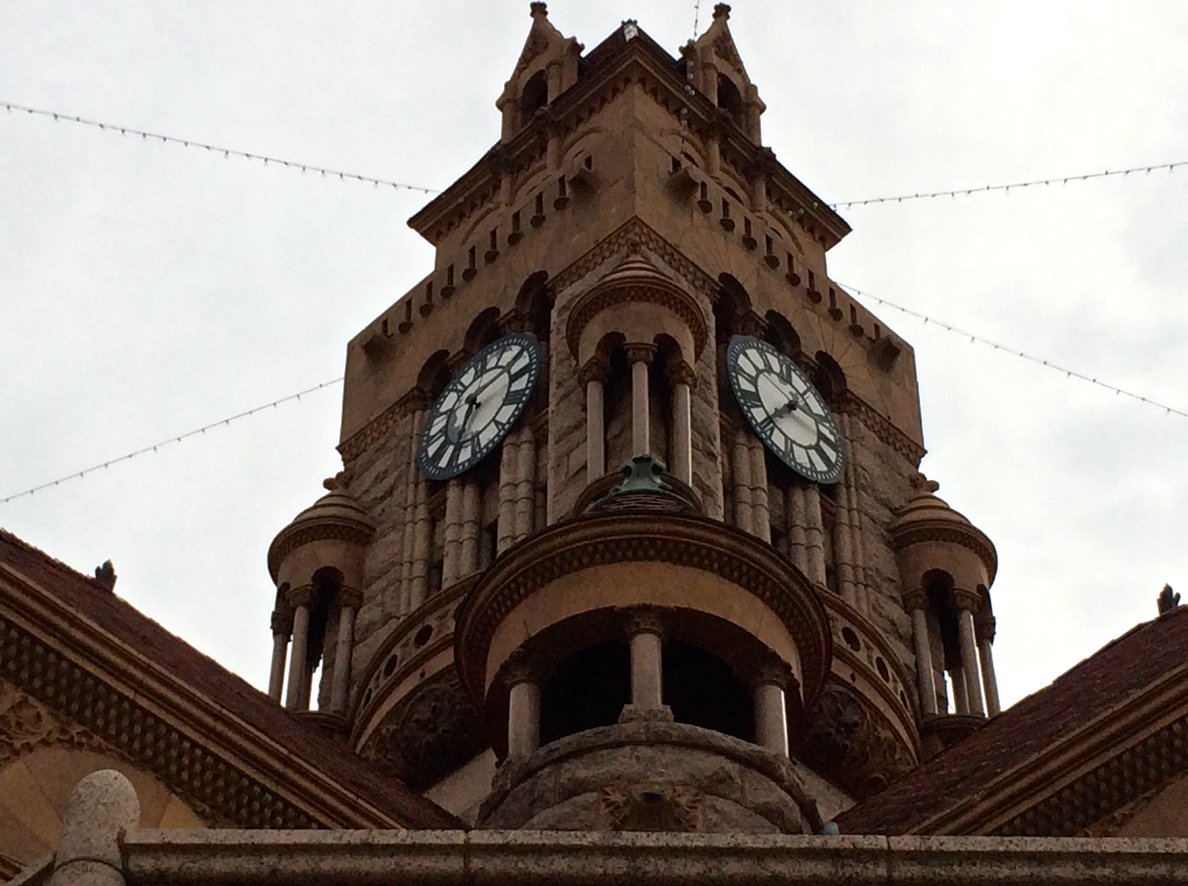 “The Waggoner Mansion or El Castille, as it is sometimes called, is an excellent example of Texas’ finest Victorian masonry architecture. Built in 1883, the house has retained approximately ninety percent of its original craftsmanship and material. This percentage far exceeds most large Victorian homes of this nature that remain in such a good state of repair in Texas, and consequently by all means this home can be classified as being “authentic”. Both the exterior and interior walls are of solid poriferous limestone construction. Although the exterior is in a good state of repair, it is in need of preventive maintenance such as painting and minor material replacement.” 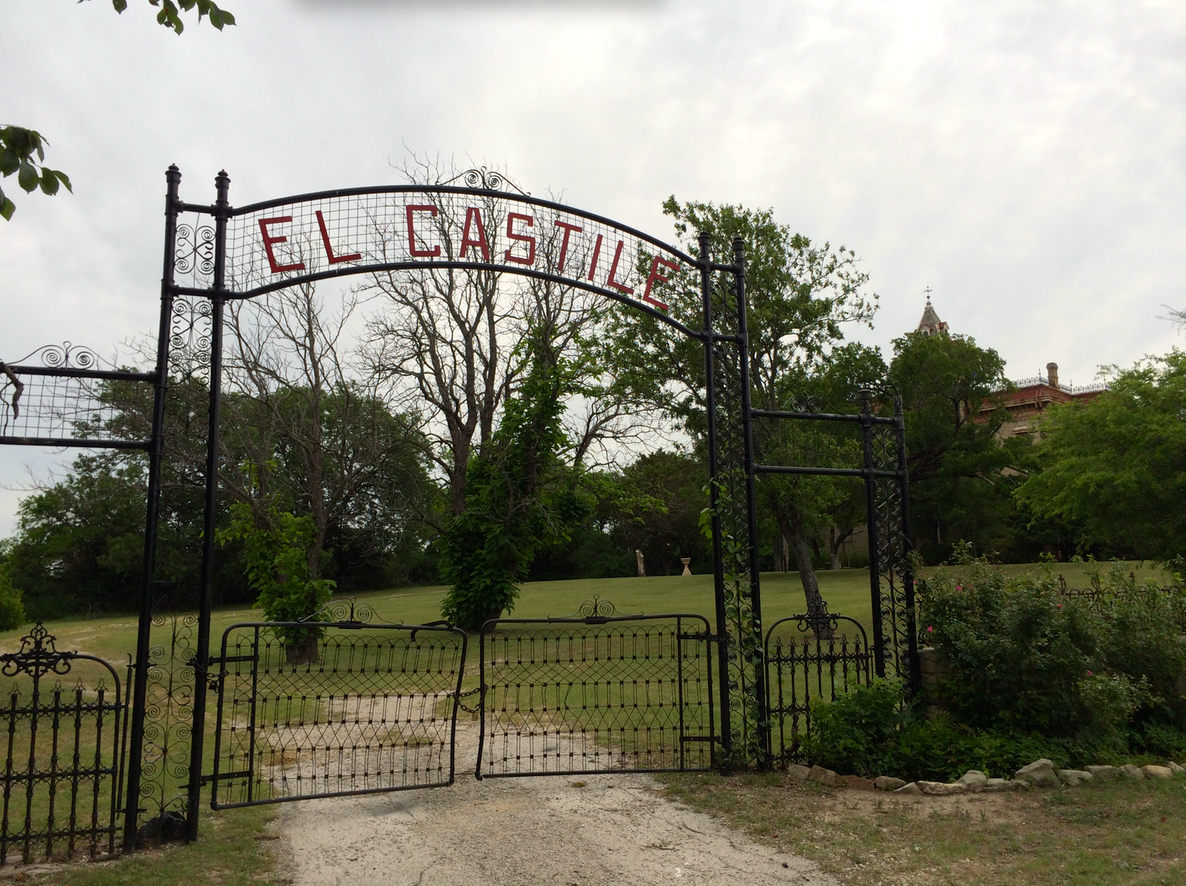 “The house contains a large basement, sixteen rooms and six and one-half bathrooms. There are two bedrooms downstairs and four upstairs. The interior of the house is in very good condition. The intricate woodwork, hardware and finishes are well maintained and only portions of some ceilings and upper walls are in need of any repair. There are many distinguishing features of the home. They include 18 ft. ceiling heights downstairs, 16 ft. ceiling heights upstairs, intricately carved door mouldings on all the interior doors with a Texas “LoneStar” motif carried throughout the house, brass hinges, doorknobs and miscellaneous hardware, frescoed ceilings in a few of the rooms, stained glass transoms above all doors and windows, interior wooden shutters on all windows, eight fireplaces each with decorative tile insets, light fixtures, especially made for individual rooms and marble lavatories in all of the bathrooms. An artisan named Decker was brought from France to the Waggoner Mansion at the turn of the century to add the fresco decorations in some of the rooms. Decker signed one of the compositions in an upstairs room.” 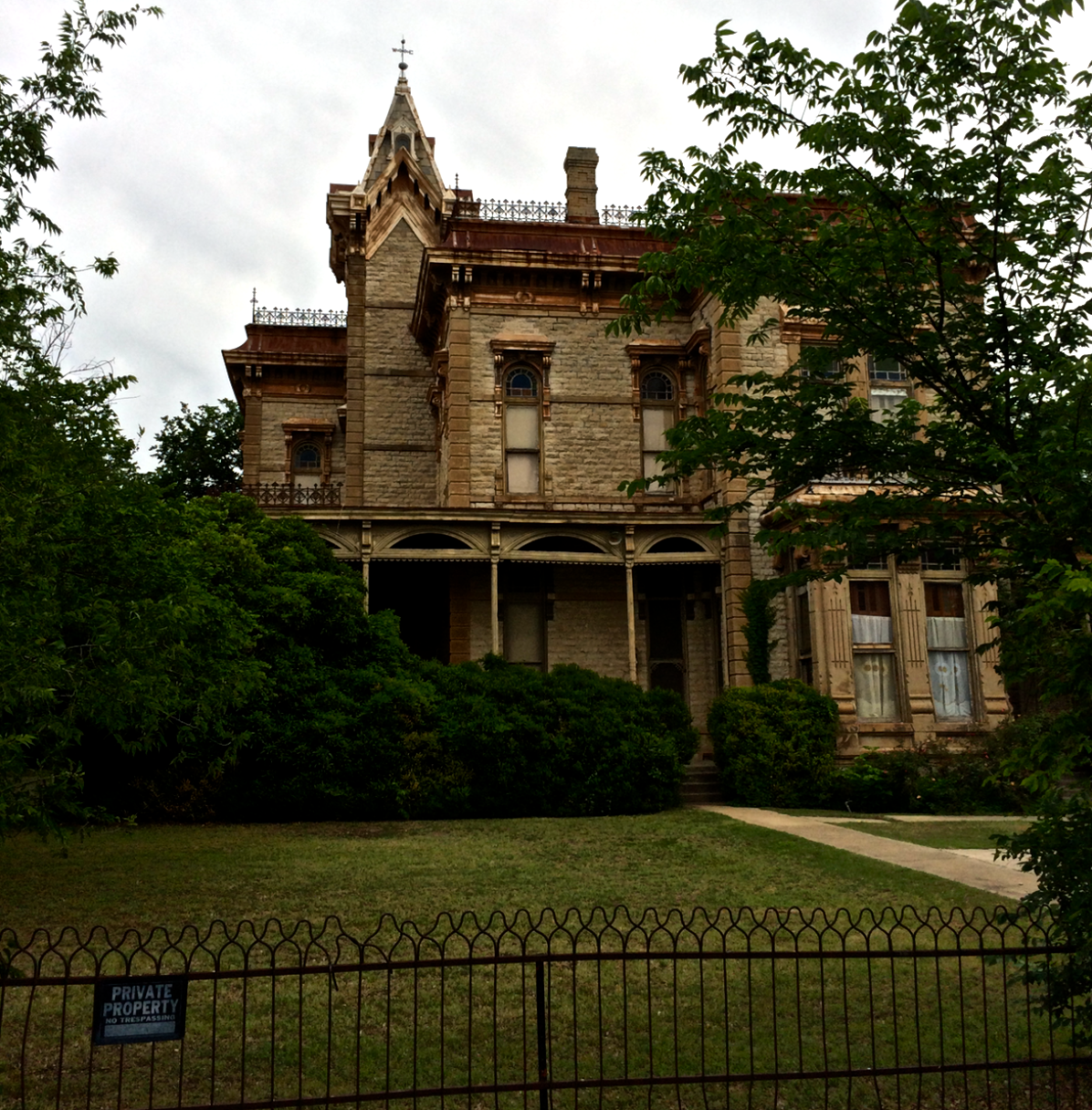 This impressive masonry Victorian house was the home of the Waggoner family, prominent in the early days of ranching in Texas. In the boldness of the style and in the strength of the material the builder achieved an appropriate expression for the original owner, Daniel L. Waggoner, and the times he personified. … In 1931, W. T. Waggoner restored the home. After the death of W. T. Waggoner in 1934, the house was sold to Mr. and Mrs. Phil Luker in 1942. The moviemakers of the film “Giant” duplicated the exterior for the movie set. Thus, the Waggoner mansion is one of the foremost and striking architectural remains of the indelible marks left by the cattle empire of Victorian Texas.”

The mansion is located at the eastern end of Main Street, a half mile away from the square. 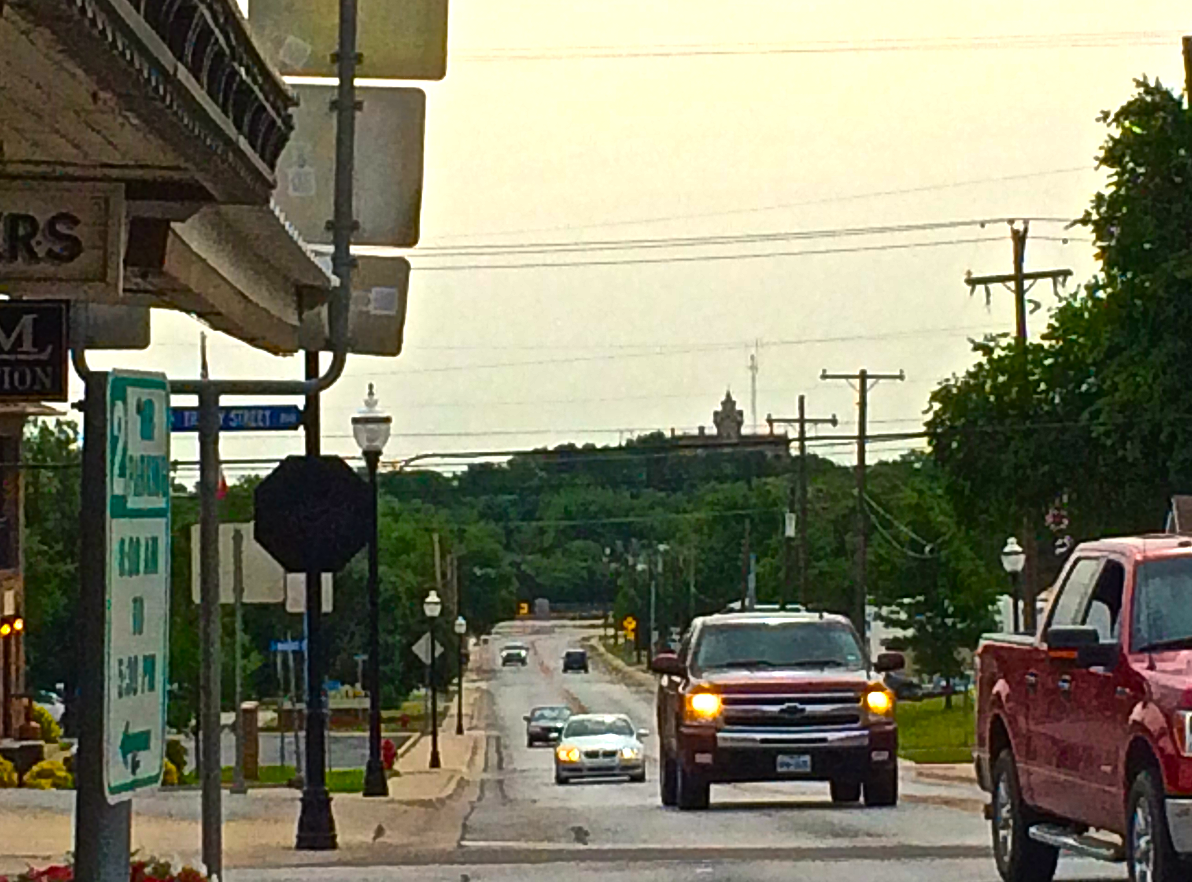 The mansion as seen from the square 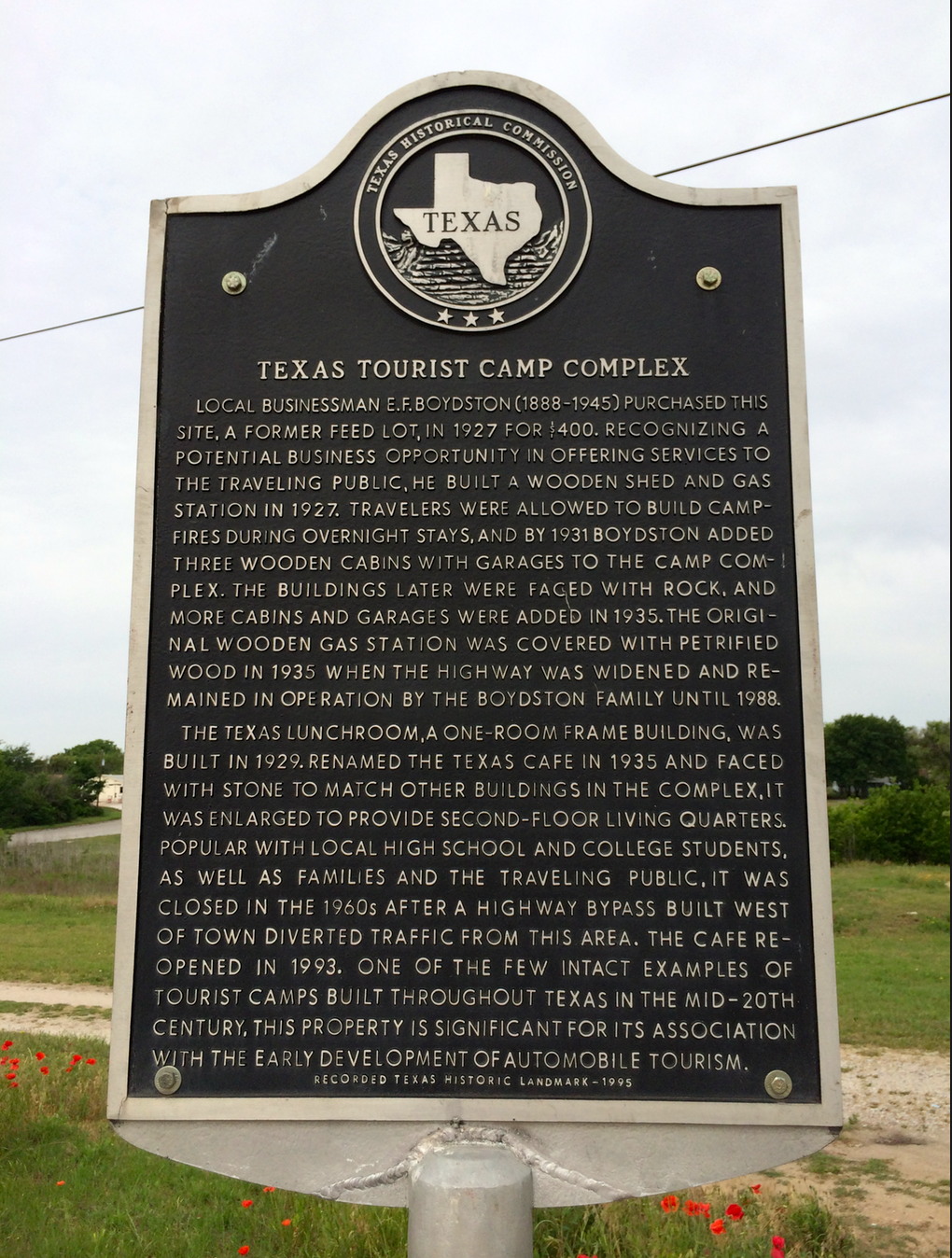 Here is some information about the complex.

The entire complex, complete with a courthouse backdrop can be found near the intersection of Hale Avenue and Highway 81 Business, south of town. 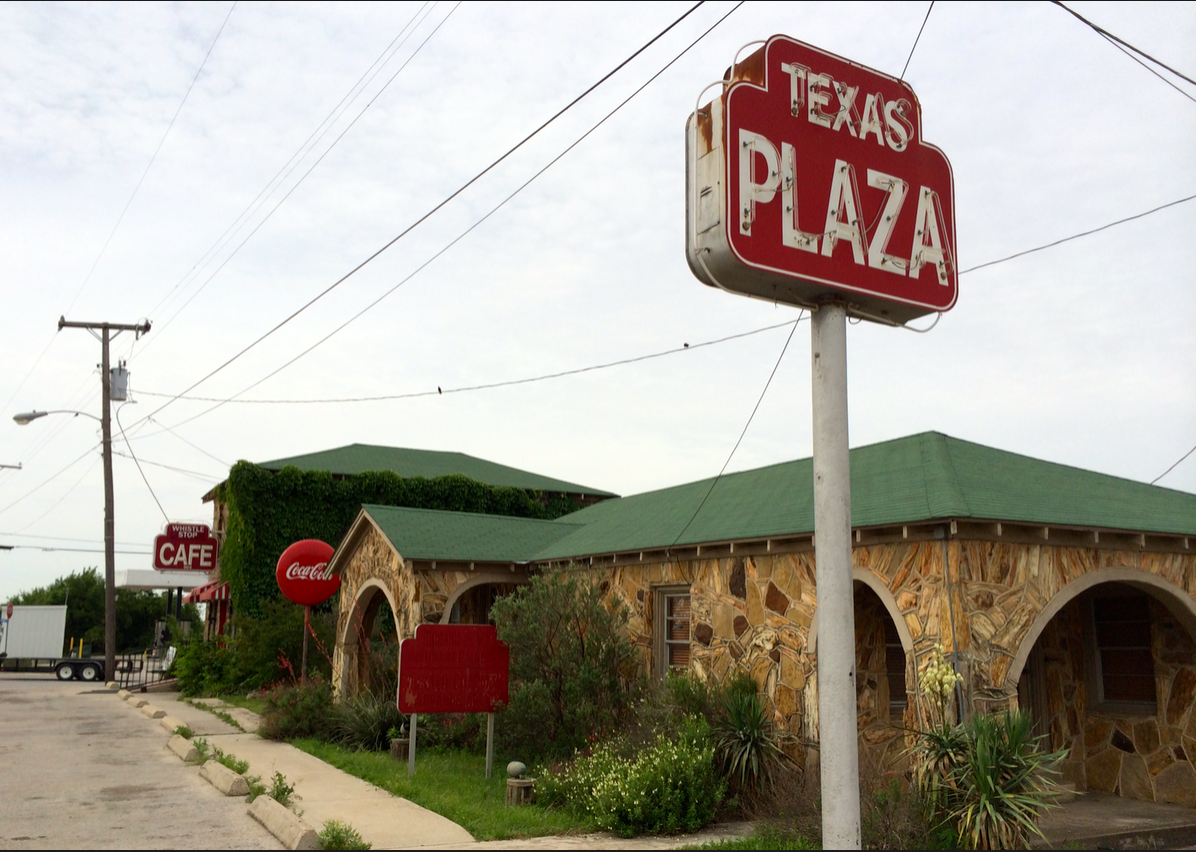 Clearly, there is no gas.