“Young County is in north central Texas. The center of the county is at 33°10′ north latitude and 98°40′ west longitude, fifty-five miles south of Wichita Falls. Graham, the county’s seat of government, is in the southeastern section of the county, sixty-five air miles northwest of Fort Worth. The county was named for Col. William C. Young. It covers 919 square miles of hilly, broken country with elevations from 1,000 to 1,300 feet above sea level.”

“The county was included in the Peters colony, a Mexican land grant made in 1841. Though the settlement terms of the grant were loosely fulfilled eventually by the Texas Emigration and Land Company, the Young County portion of the grant remained unsettled until the 1850s. In 1851 the United States Army established Fort Belknap on the Red Fork of the Brazos, where eventually the town of Belknap grew up. Fort Belknap became one of the largest and most important military posts in North Texas prior to the Civil War. In 1854 the Brazos Indian Reservation was surveyed by Capt. Randolph B. Marcy twelve miles southeast of the fort.”

“The first settlers in the area included John and Will Peveler, contractors who supplied the fort and the reservation. Young County was established by the Texas legislature in 1856 from lands formerly assigned to Bosque and Fannin counties and was attached to Wise County for judicial purposes until it was organized later that same year. The town of Belknap was chosen as the county seat and was a stop on theButterfield Overland Mail route from 1858 to 1861.” 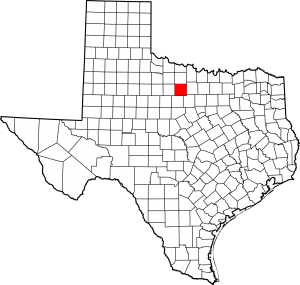 “The county’s early years were marred by conflicts between Indians and white settlers in the region. The Brazos Reservation, originally 18,576 acres, was doubled in size to make room for other western Indian tribes. Among the 2,000 Indians living there were Caddos, Anadarkos, Wacos, and Tonkawas, each with their own villages and all relieved to have protection from the Comanches. Racial antagonisms, fueled by the Whiteman, a Jacksboro newspaper, brought tensions to a state of armed belligerency by 1858. Governor Hardin R. Runnels and Gen. Sam Houston asked the federal government to move the reservation Indians from Texas. The Indians were removed to Indian Territory in July [1859]. Some months later most were slaughtered by Comanches.”

“Though Confederate soldiers held Fort Belknap during the Civil War, Indian depredations during the war and in the late 1860s led many of the original settlers to abandon the area. By 1864, according to county tax records, there were only thirty-one slaves.”

“In 1865 the county’s government was dissolved, and the area was attached to neighboring Jack County for administrative purposes; the county records were transferred to Jacksboro. Fort Belknap was reoccupied by federal troops in 1867, but by 1870 there were only 139 people, including four blacks, living in the county.”

“After the federal government redoubled its efforts to suppress Indian activity in the region following the Warren Wagontrain Raid of 1871, the area again began to attract settlers, especially after the lands of the Brazos Indian Reservation were opened to settlement in 1873. The county was reorganized in 1874, and the county records were brought back from Jacksboro. This time the new town of Graham, platted in 1873, was chosen as the county seat; settlers who had taken up Indian reservation lands supported the new town since it was near their farms.”

“In 1874 the nearest railroad was at Dallas, but as the Texas and Pacific built westward, residents came to receive mail and freight at Weatherford, Mineral Wells, and Jacksboro; in 1876 farmers began to ship pecans, their first export crop, to these railheads, and cotton began to be grown about this time. Meanwhile, cattle ranching remained important to the economy. Stockmen gathered at Graham in 1877 to form the Stock-Raisers’ Association of North-West Texas.”

“An unproductive oil well was drilled in 1887, and in 1891 a group of investors formed the Graham Mining Company in hopes of mining gold, silver, and coal in the area. Though several promising coal seams were located, lack of adequate transportation facilities caused interest in the project to lapse for the time being.”

“The area was hit hard during the Great Depression of the 1930s. Total acres of cropland harvested dropped from 114,906 in 1930 to 92,308 by 1940; cotton acreage plummeted to only 23,000 acres by 1940. Federal programs during the depression helped ranchers and farmers eradicate prickly pears, build water storage tanks, purchase seed and fertilizer, and terrace the land; in 1936 the Work Projects Administration restored old Fort Belknap.”

“The rural population dropped significantly during the 1940s and 1950s as mechanized farm techniques contributed to the consolidation of farmlands, and as young people increasingly moved to urban areas in search of job opportunities. The oil and gas industry expanded significantly during these years, however, particularly in the early 1950s. Eighty-one wells were drilled in the county in 1953 and 1954, for example, more than were drilled in any other county in North Texas at the time.”

I was the guest of Young County and Graham on January 8, 2011 and returned to rephotograph the courthouse on May 17, 2014. 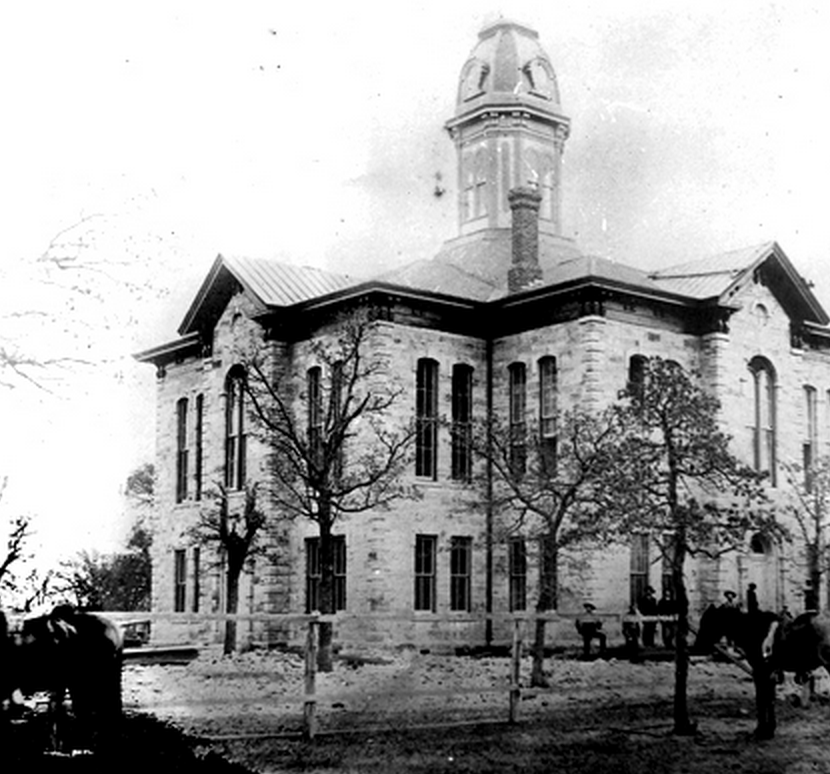 I’m uncertain of the architect of this building, however I do know that the contractor was N.J. Rosenquist. This structure cost the county $29,907 and was made of sandstone. In 1932, it was razed, leaving behind only the eastern door. 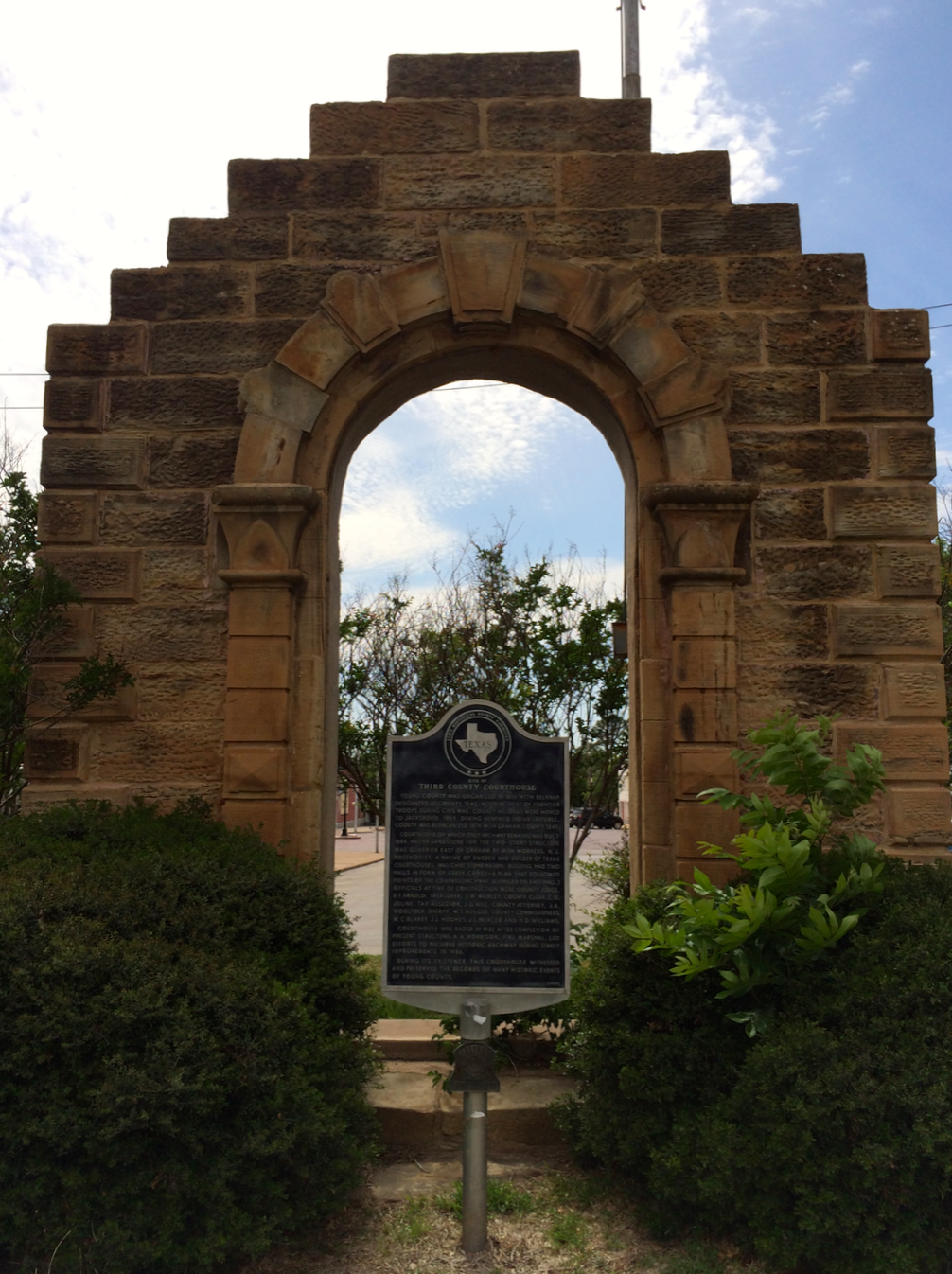 Today, the eastern door is still standing across the street from the courthouse, in the middle of a small traffic circle. 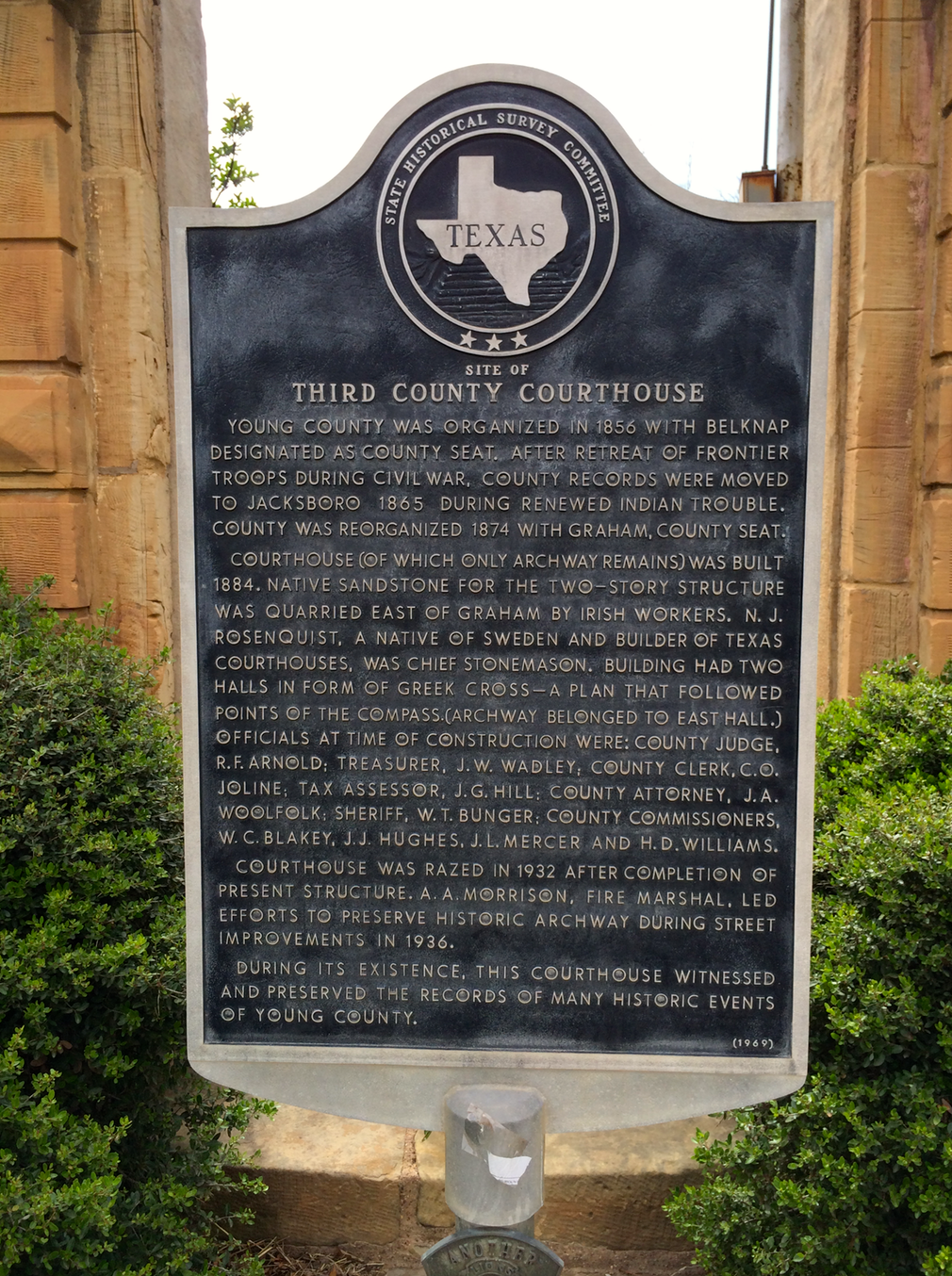 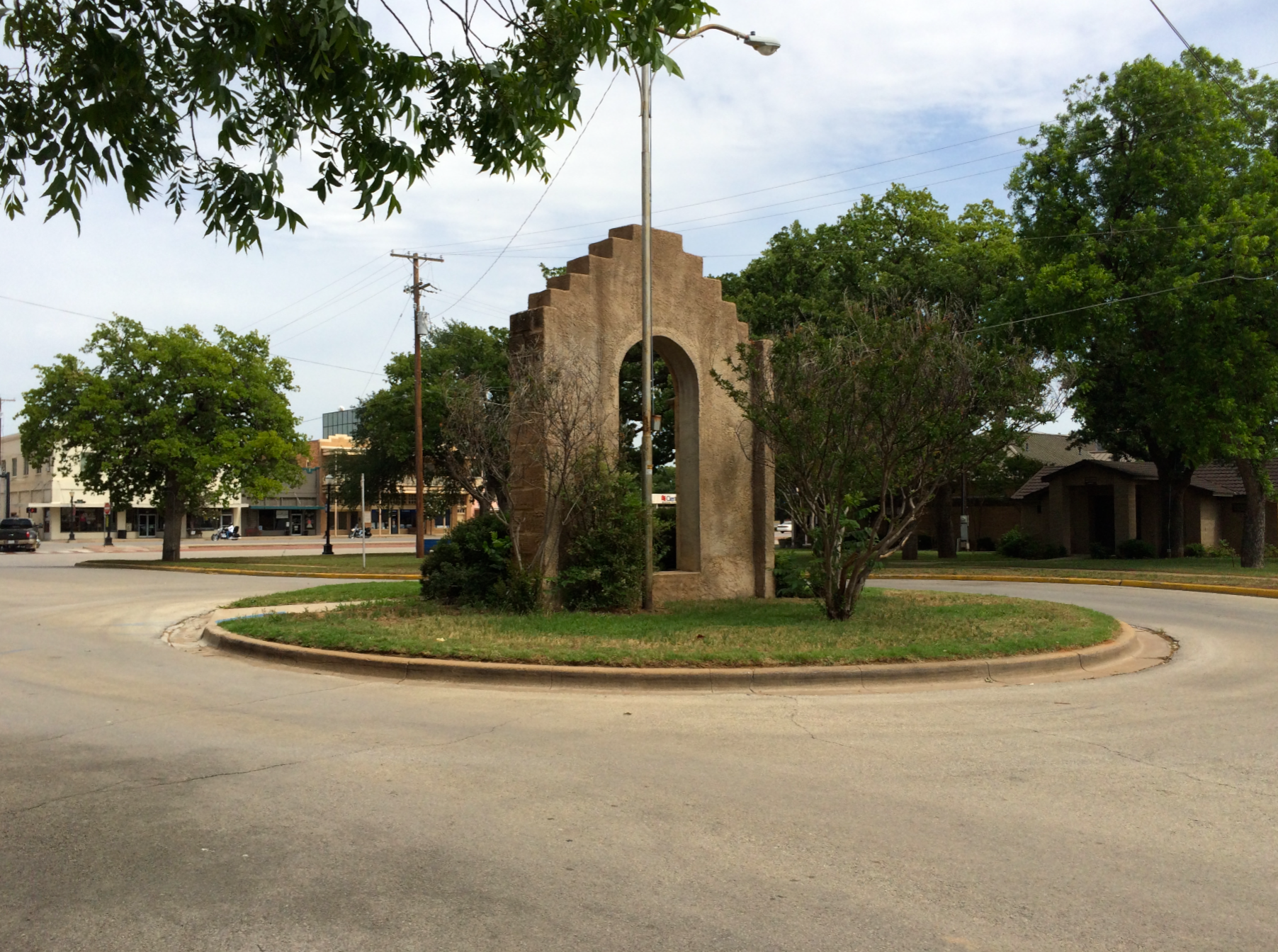 See the similar approach at the Stephens County Courthouse, here. 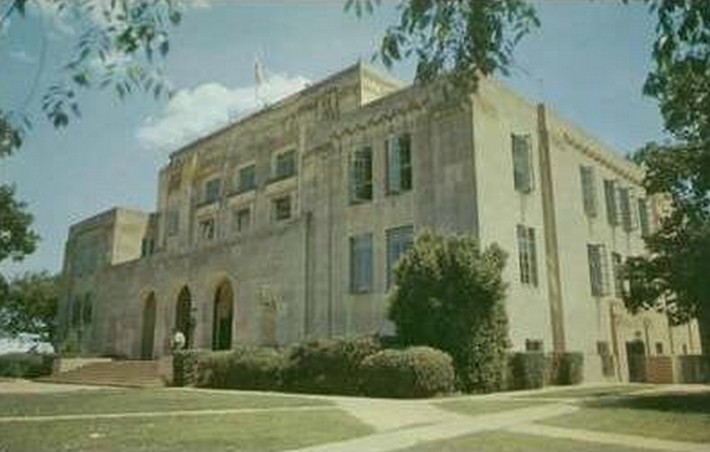 Designed by Withers and Thompson and constructed by James T. Taylor, this impressive Moderne structure was created in 1932 and the 1884 building was demolished. 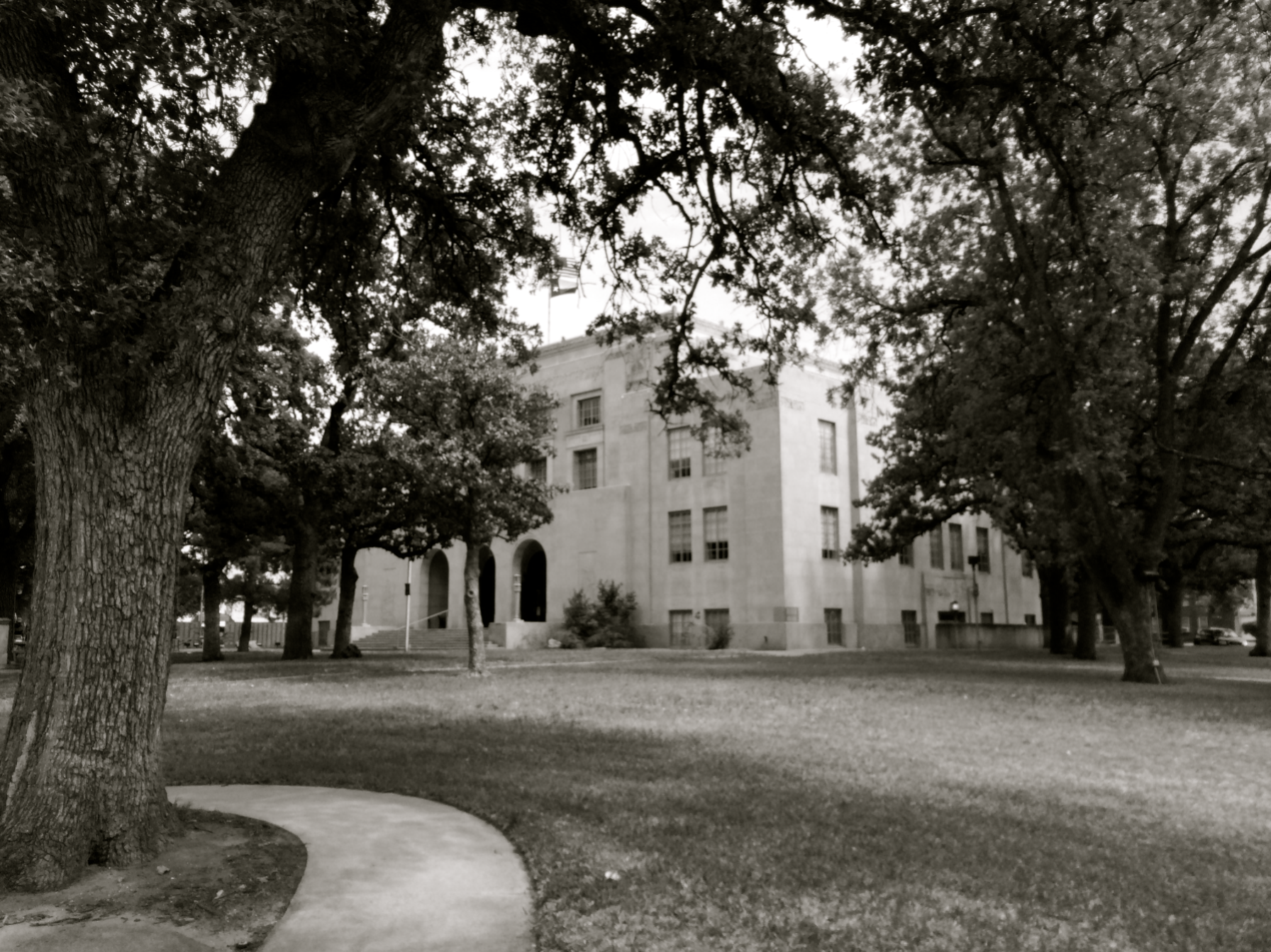 The courthouse sits in the center of a very large green. 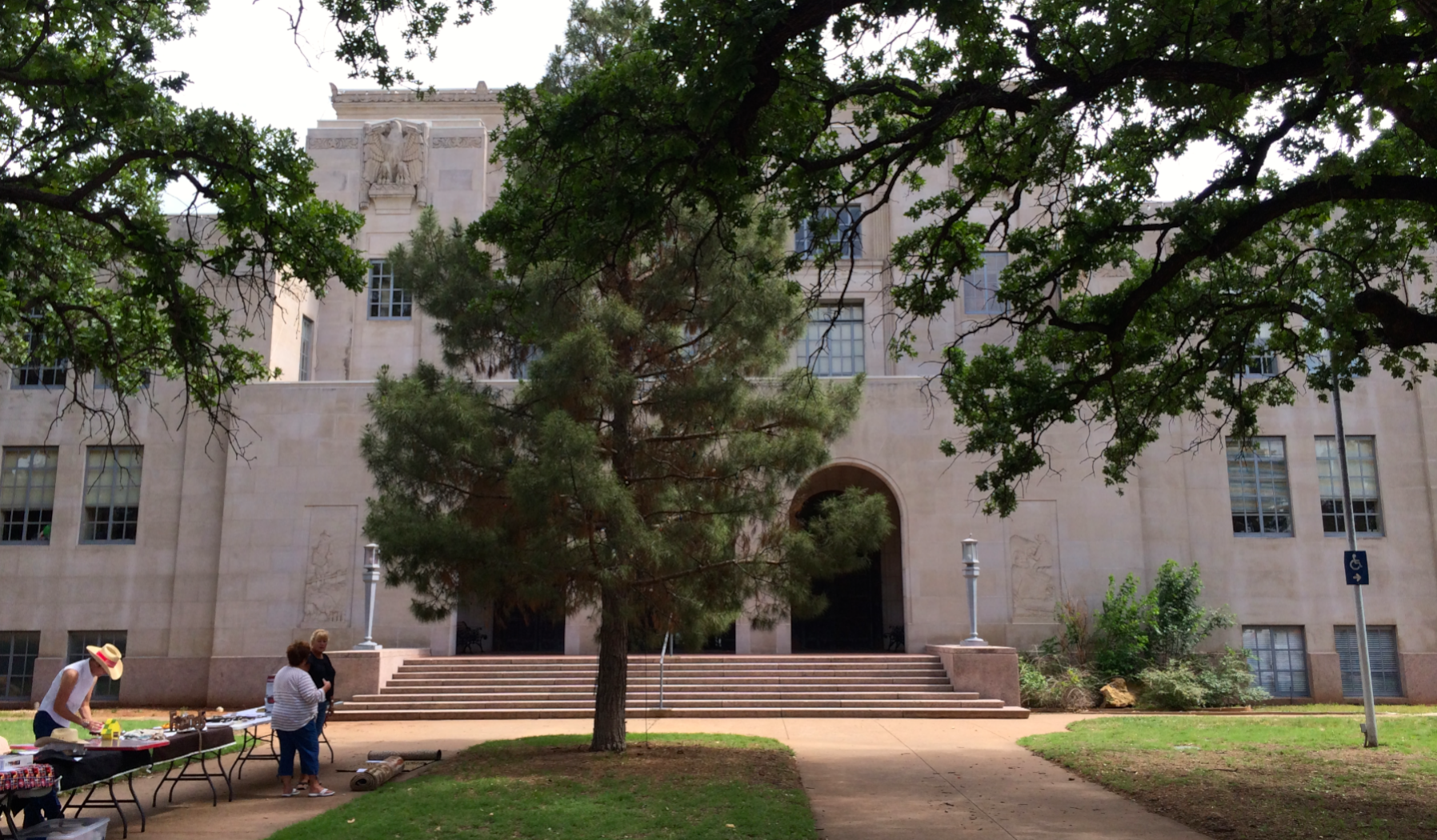 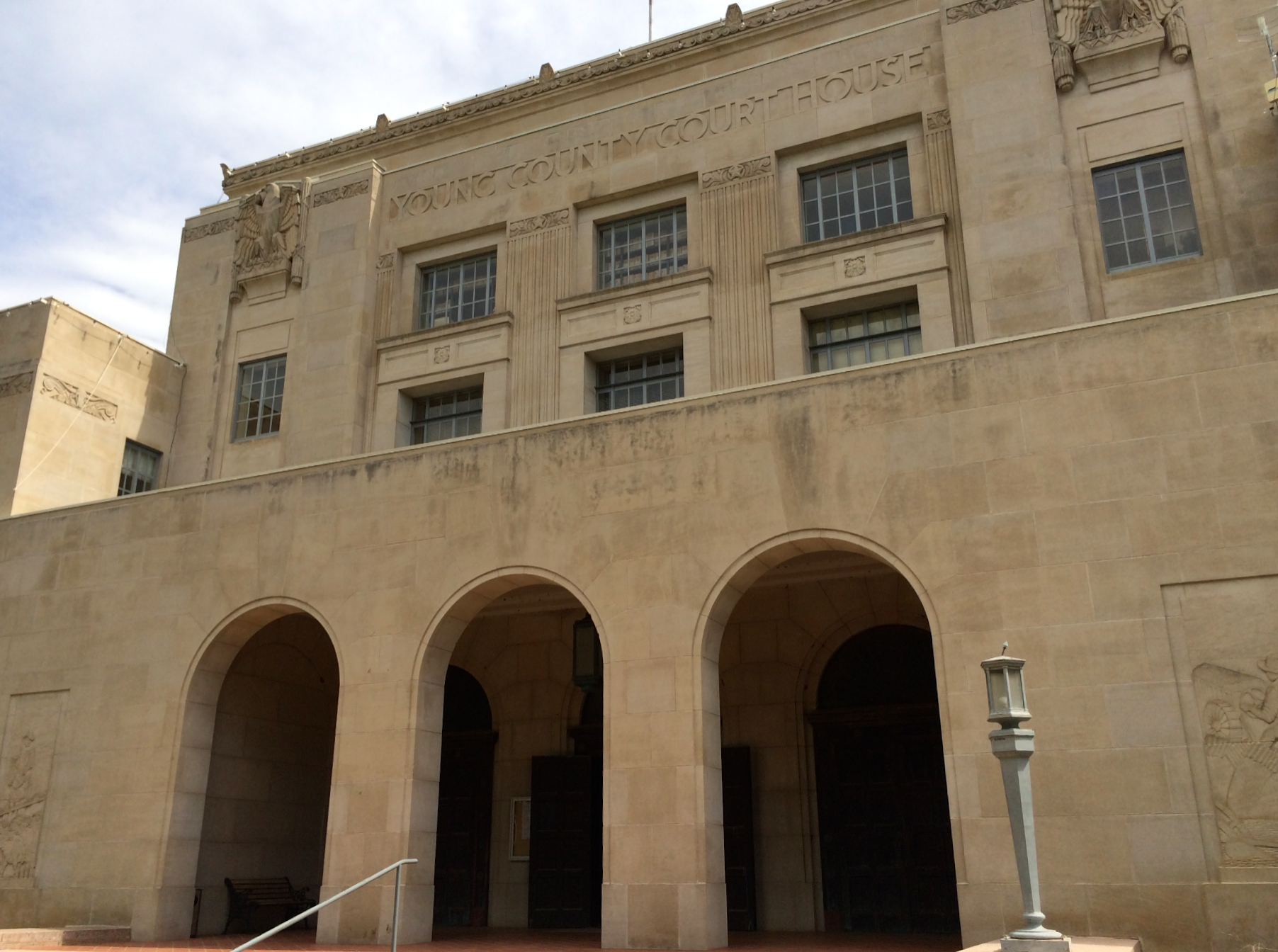 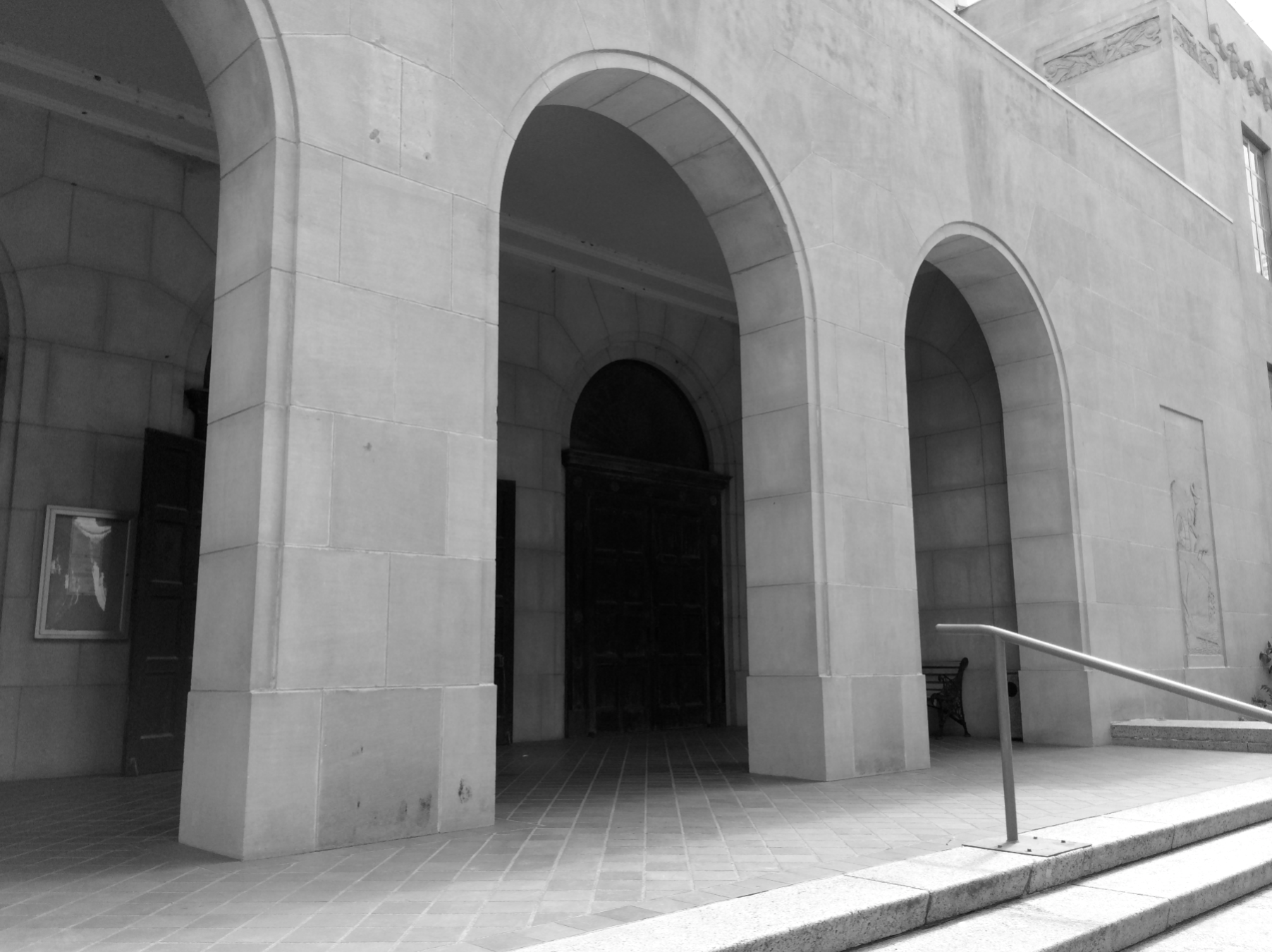 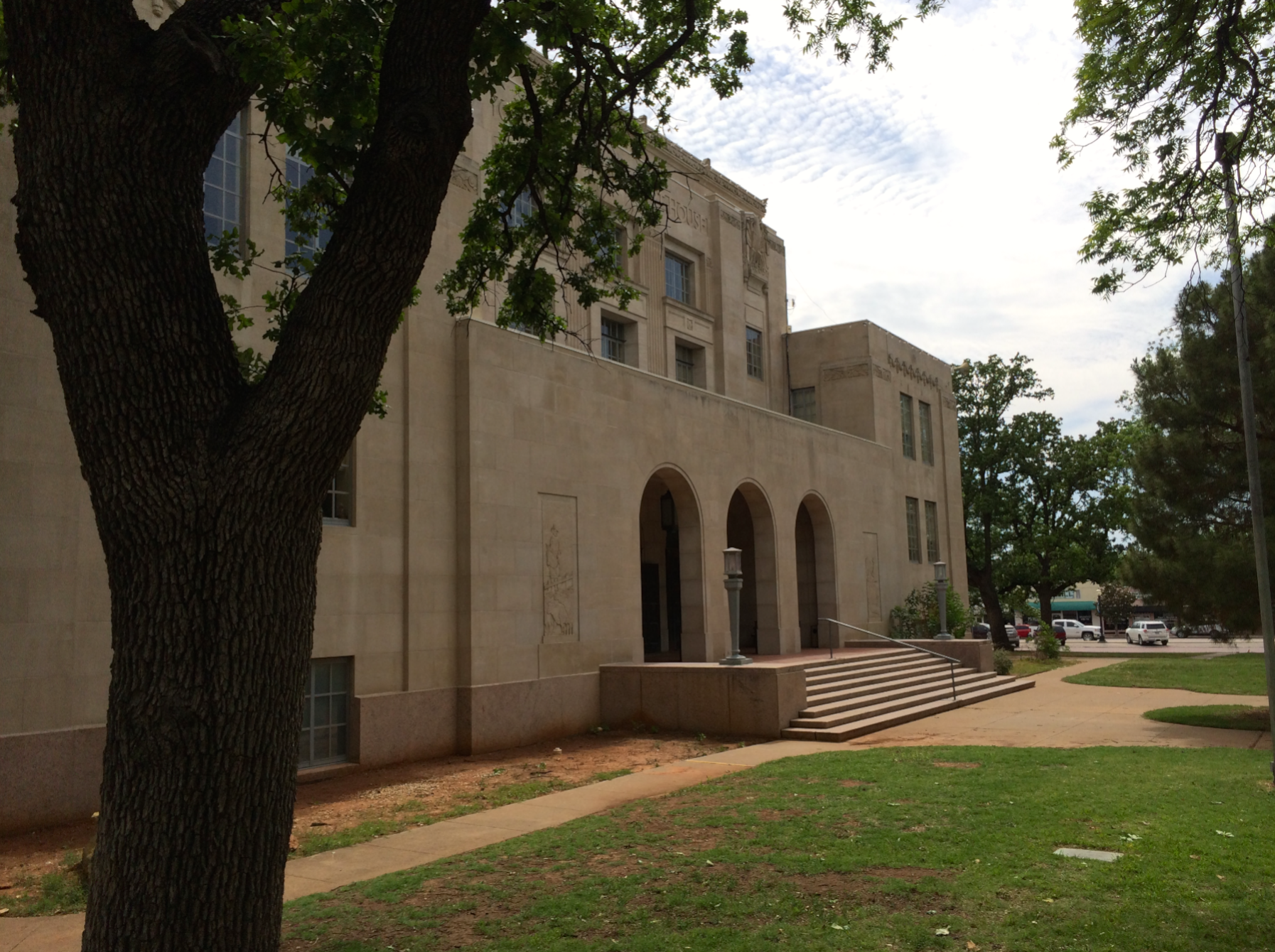 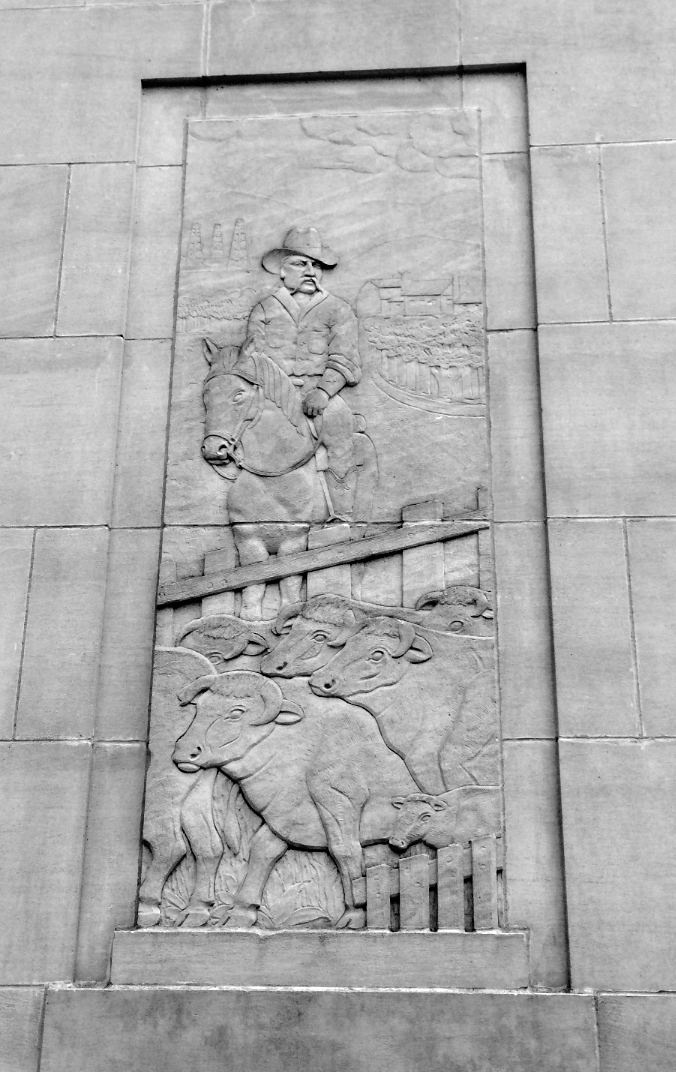 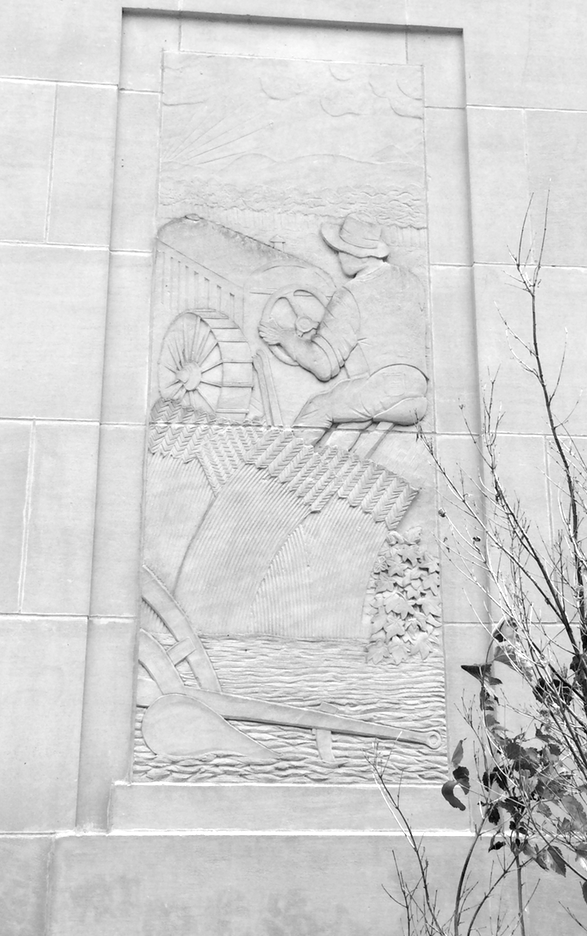 Two impressive murals grace each side of the main entrance. 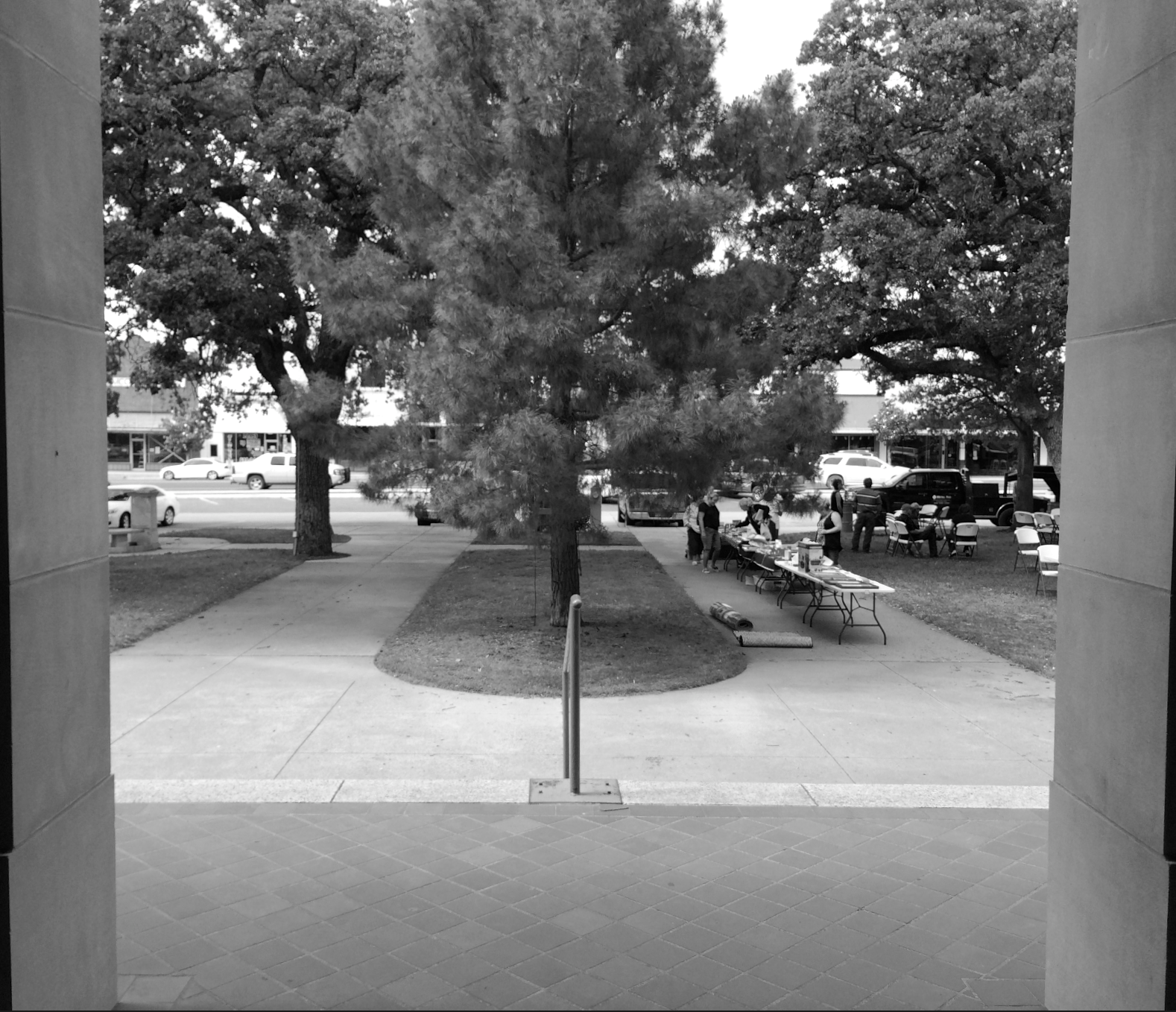 The view from the north steps; on the day of my visit, a church benefit had “set up shop” near it. 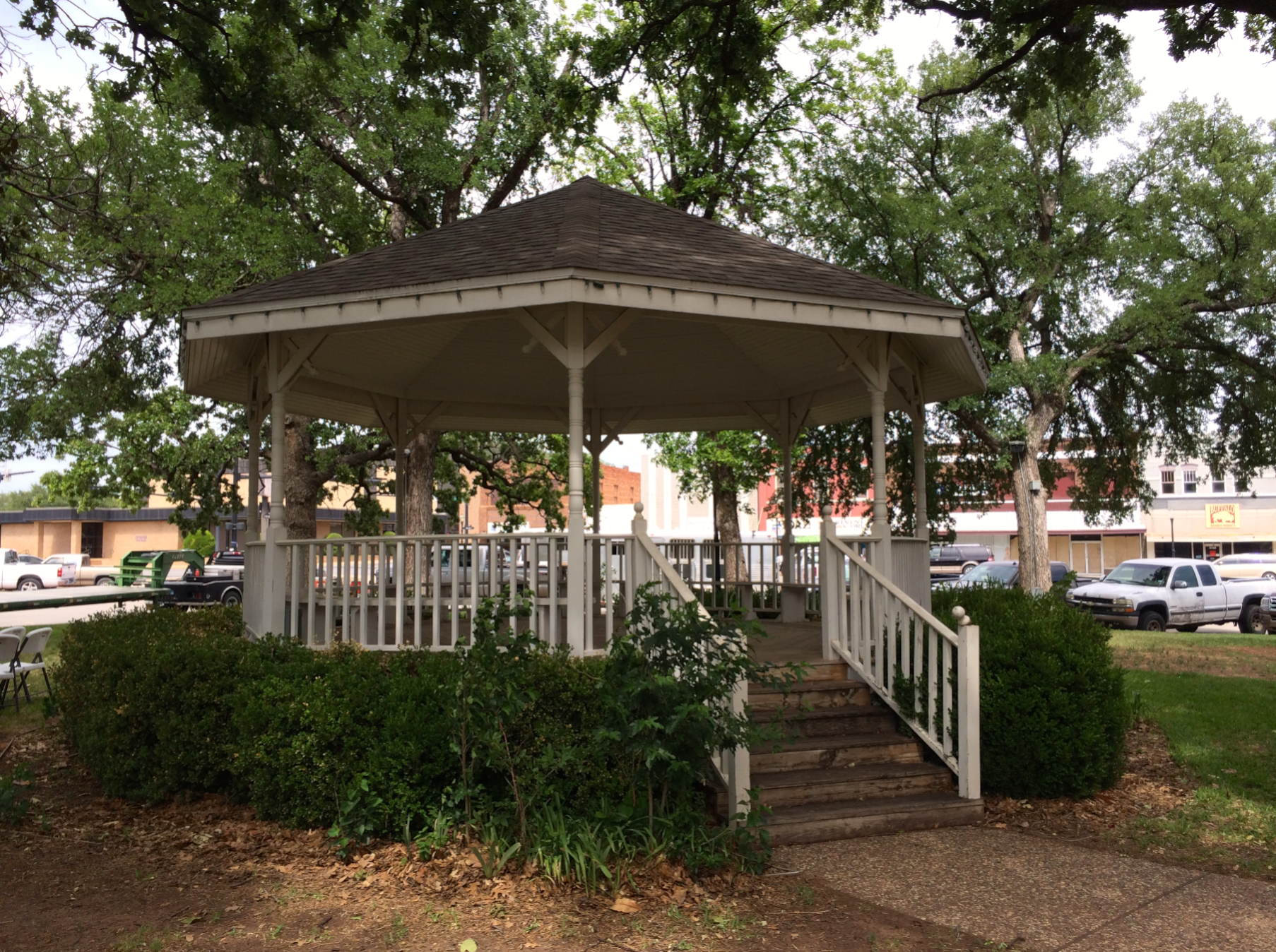 A gazebo lies on the northeast corner of the courthouse lawn. 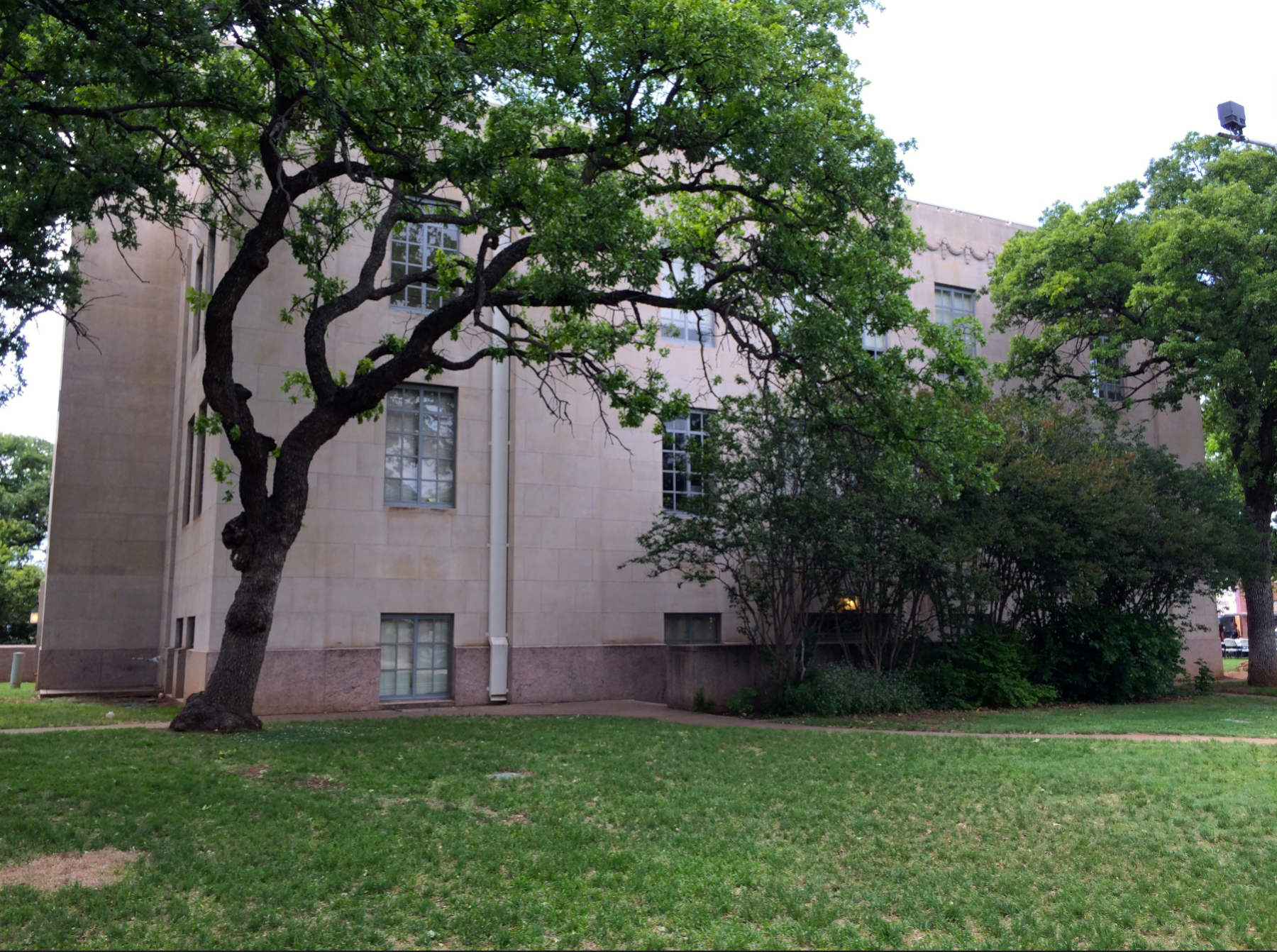 An extensive veterans’ memorial is also on the eastern side. 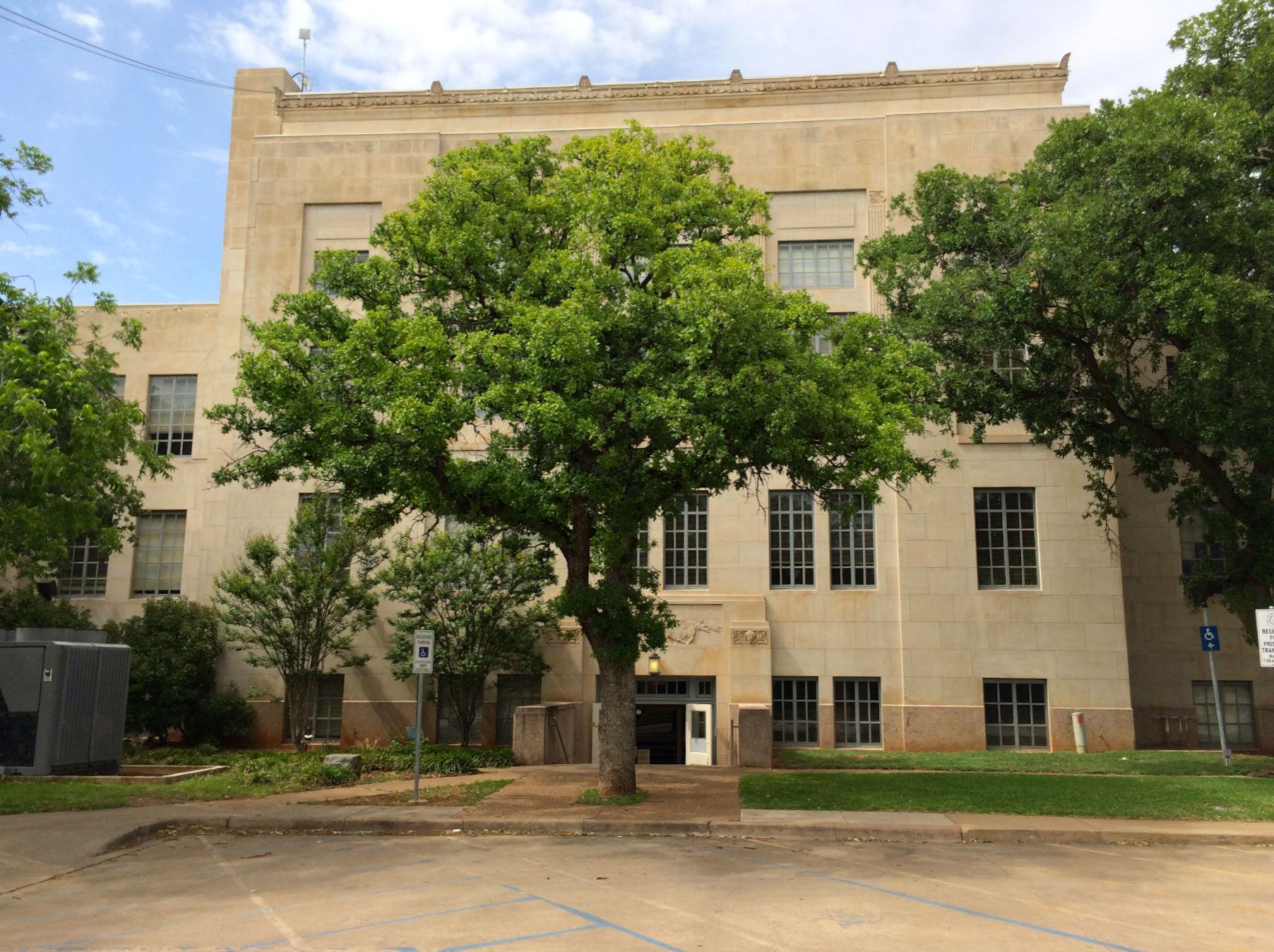 The southern side of the courthouse faces 3rd Street. 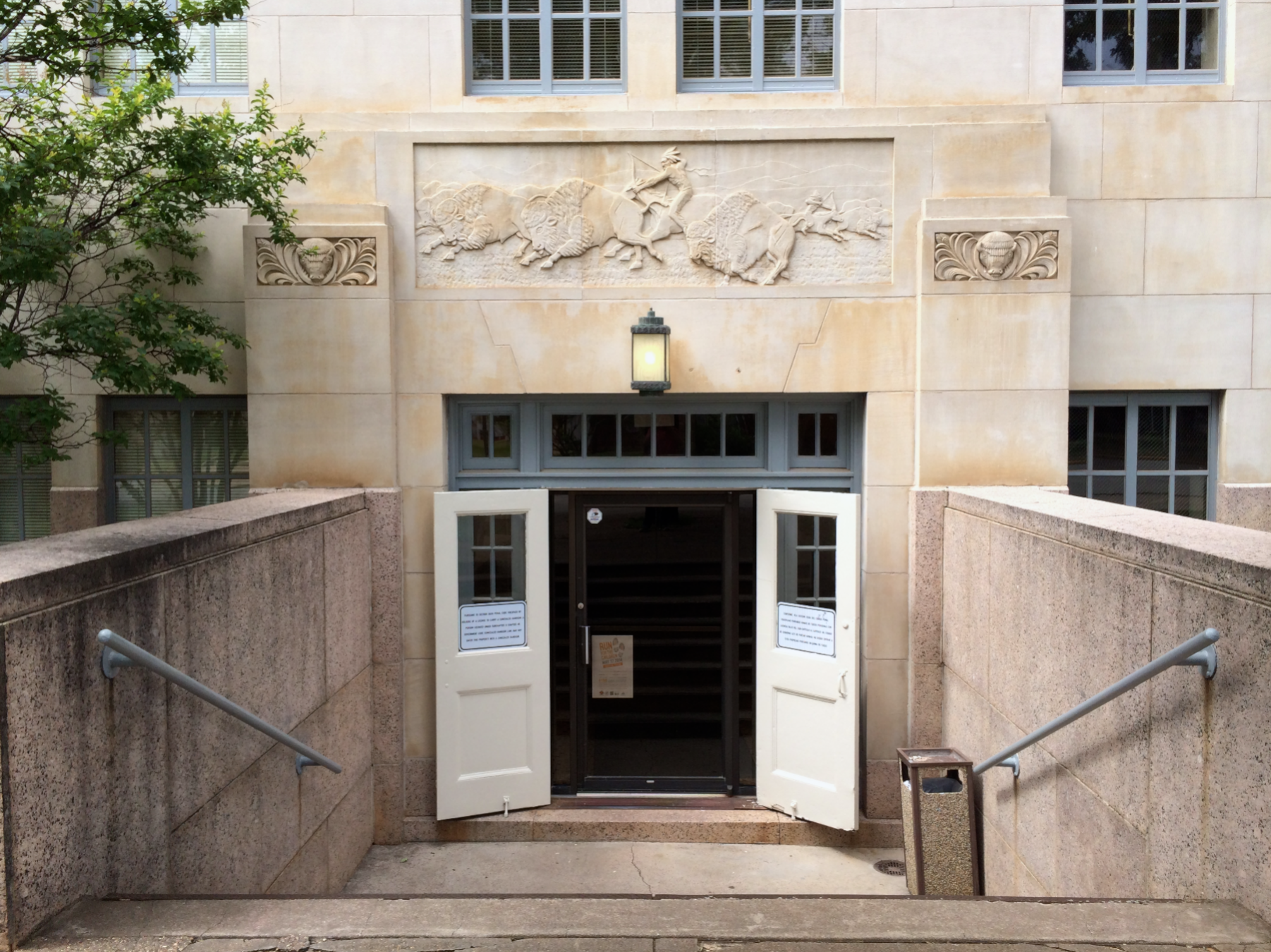 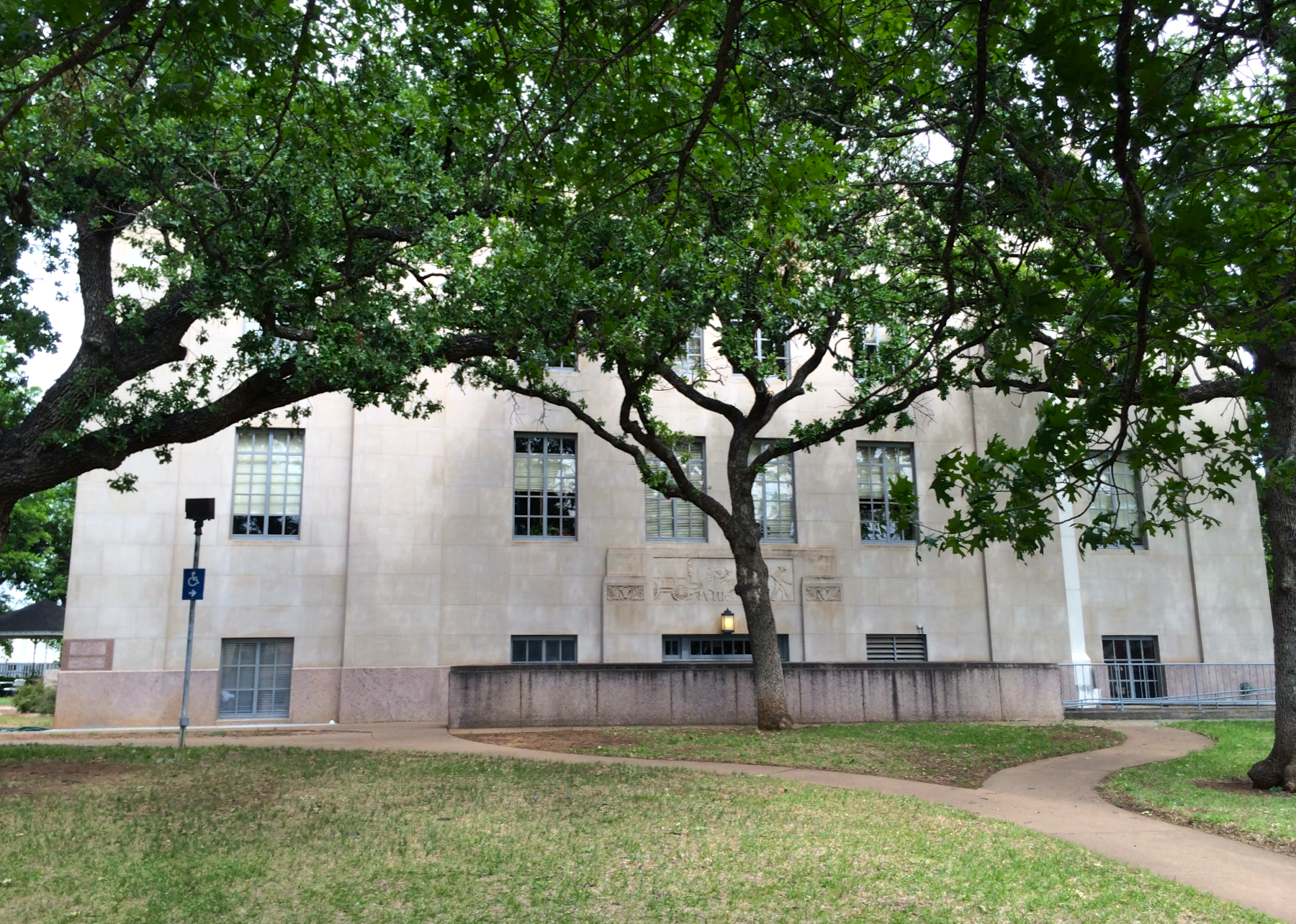 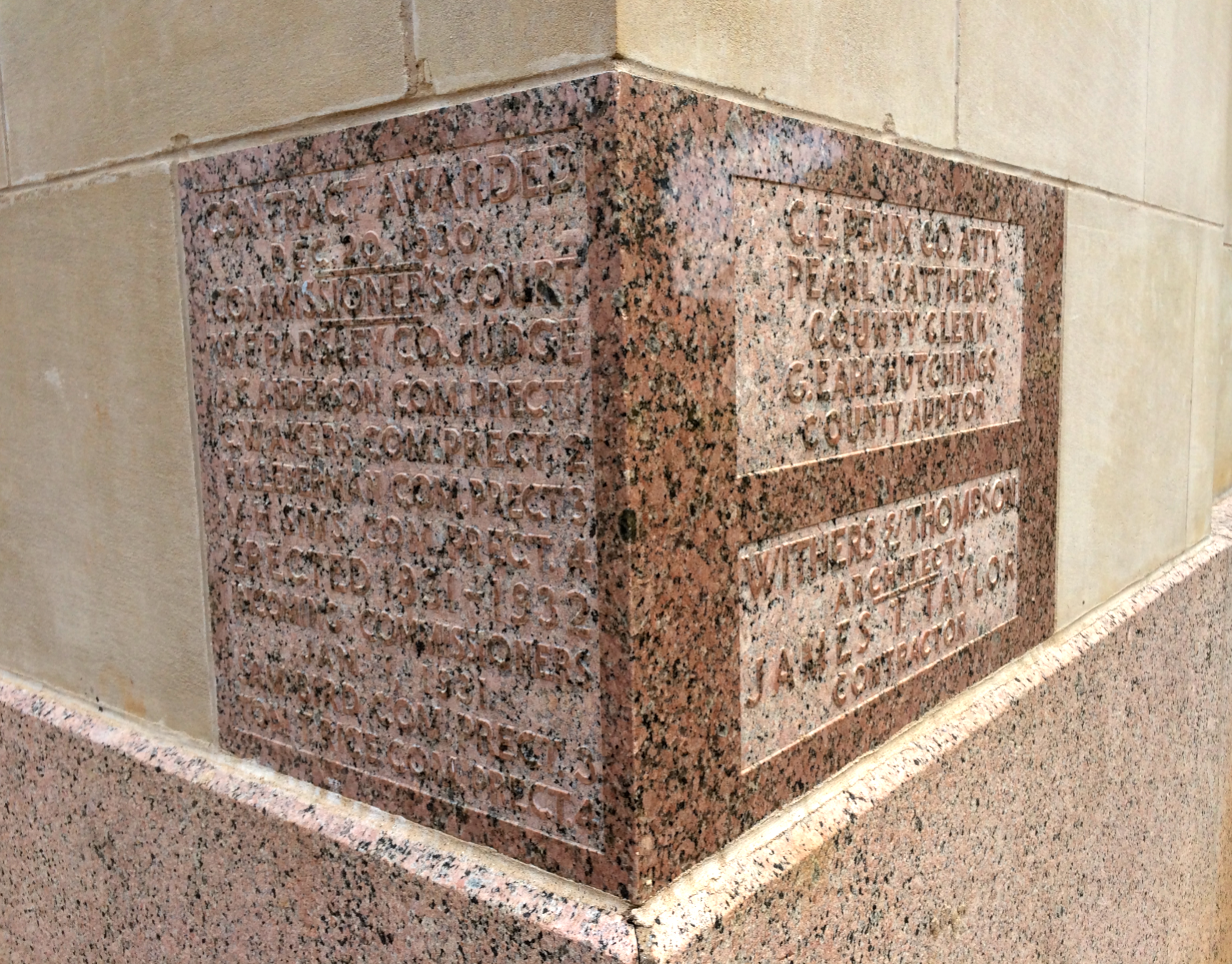 The cornerstone is on the northwest corner. 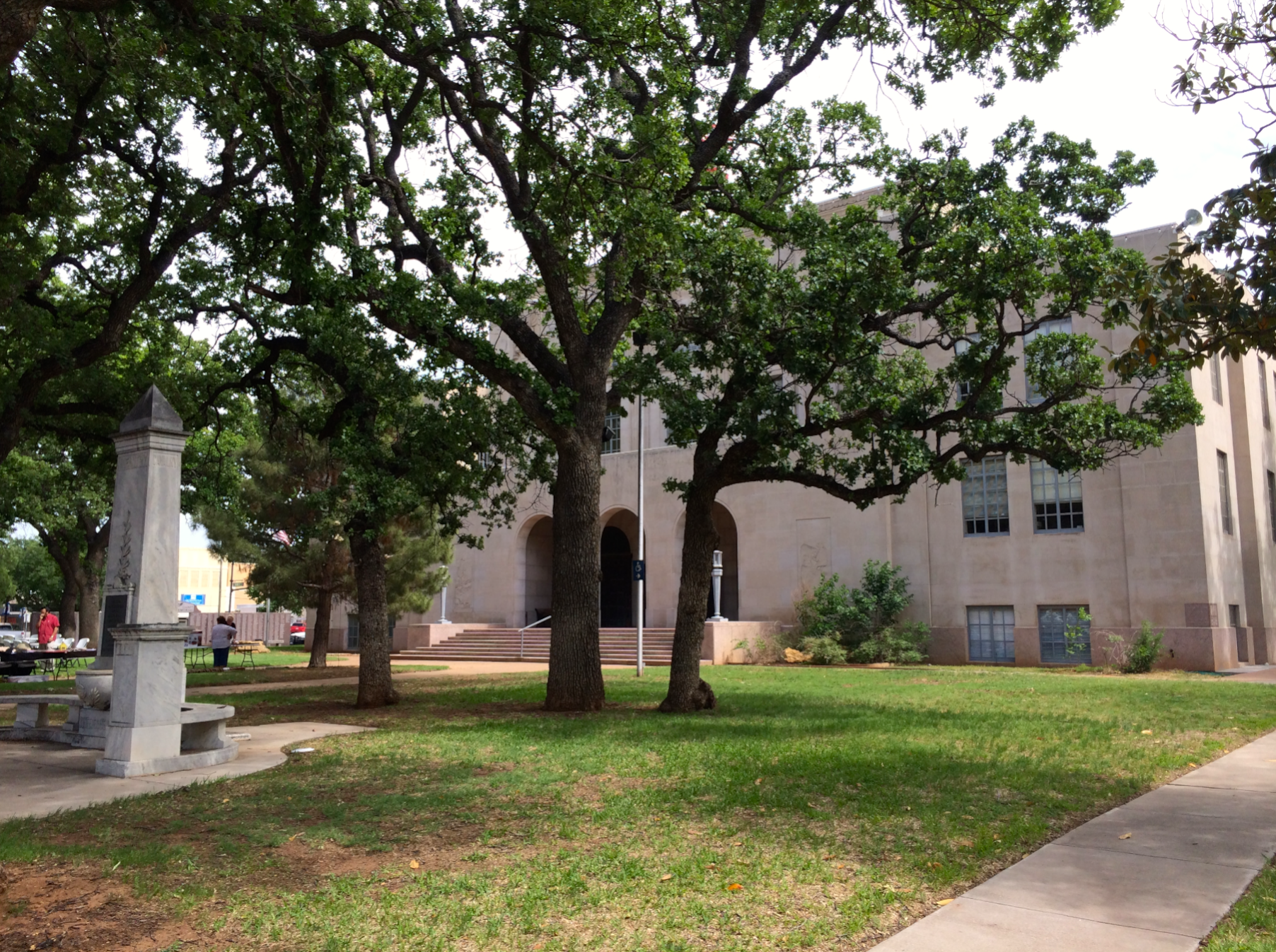 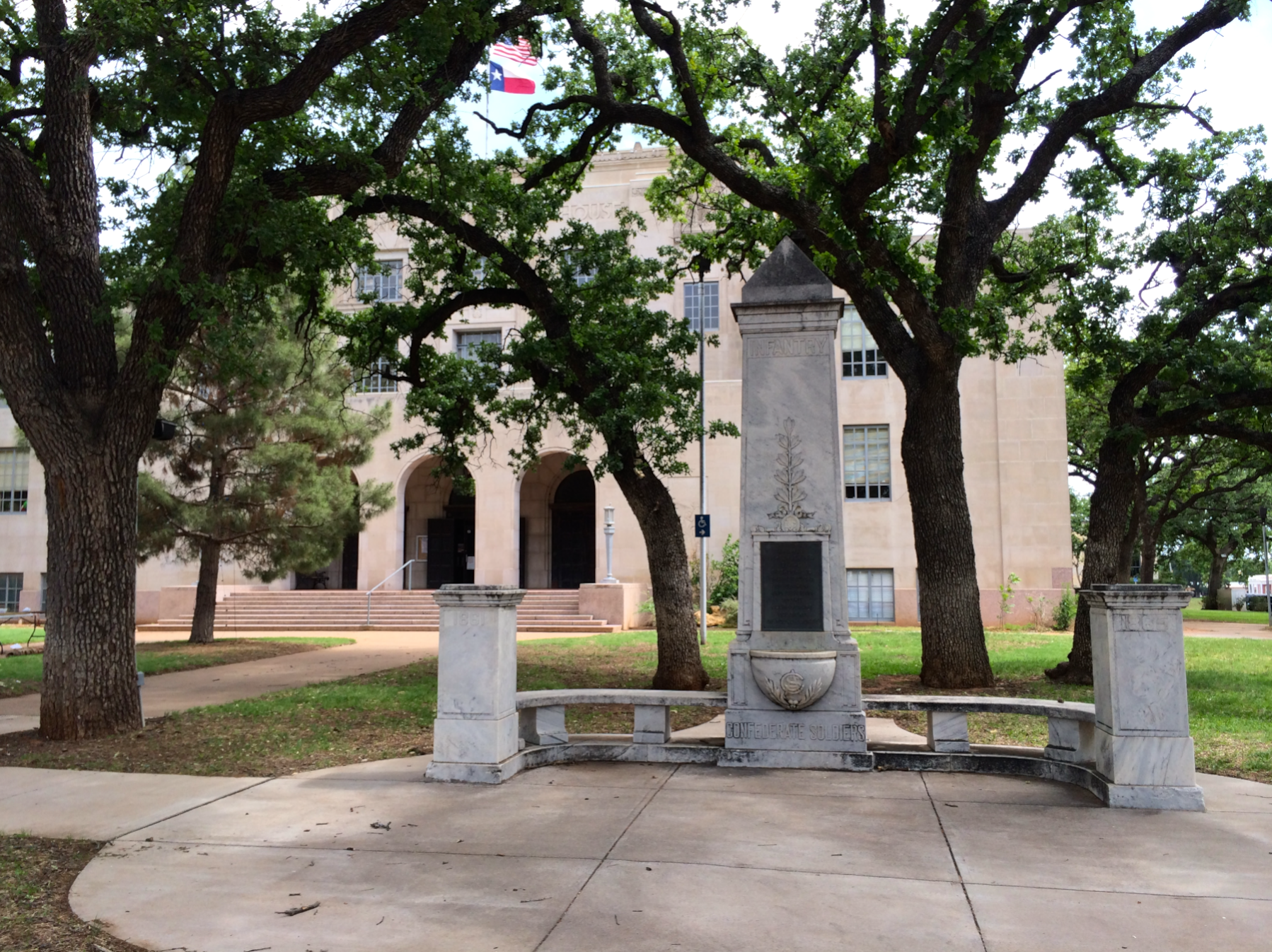 While other veterans are honored on the courthouse’s eastern side, veterans of the Civil War are remembered on the northern side.

Across from the southern side is the Old Post Office Museum & Art Center.

Some buildings along 3rd Street are graced with colorful murals.