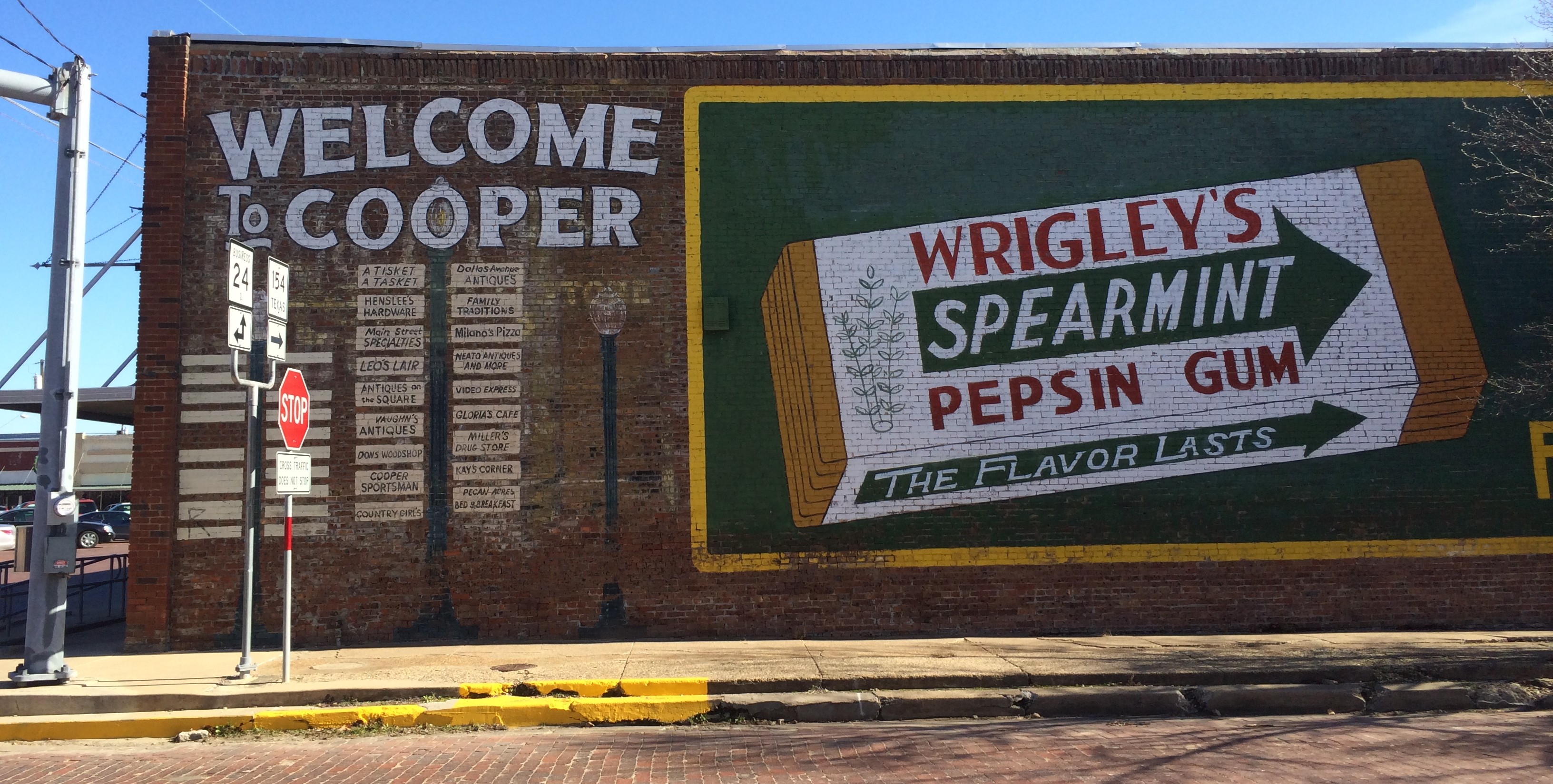 “The county comprises 278 square miles of the Blackland Prairies.” 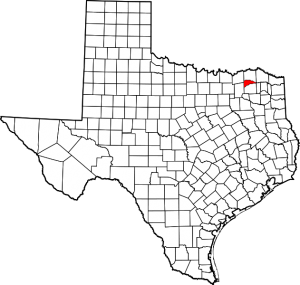 “By 1830 an agent had moved into the area to report on local Indian activities, and in 1836 the government of the new Republic of Texas recognized the land between the Sulphur rivers as part of Red River County. Without the restrictive regulations of the Spanish and Mexican governments, more settlers arrived, particularly from the South. By late in the 1830s, Dr. Moses Hogue and the Birdwell, Simmons, and Wilson families had established the little village of Ben Franklin. In 1840 the Congress of Texas formed Lamar County, which included present-day Delta County, from Red River County. In March 1846 the new state legislature organized Hopkins County, which absorbed the southern two-thirds of Delta County.”

“At the end of the [Civil War] the pioneers who had settled between the two rivers turned their attention to rebuilding an agricultural and herding economy. As the less-isolated county seats of Hopkins and Lamar Counties grew and developed, people from the river delta were forced to travel long distances over inadequate dirt roads and to cross waterways that were often flooded for long periods of time. In 1868 they petitioned the legislature to form a new county that would include parts of Hopkins, Lamar, Hunt, and Fannin counties.”

“After much debate, Texas lawmakers granted their request on July 29, 1870, but only after excluding Hunt and Fannin counties because neither wished to be included. Governor Edmund J. Davis designated a five-man board of commissioners to organize the new district, to be called Delta County for its triangular shape. The county seat would be a new town named Cooper after Leroy Cooper, chairman of the House Committee on Counties and Boundaries, and situated directly between the North and South Sulphur rivers.”

“Cooper soon became the center of local activities, and in 1873 Bob Michiel began publication of the first newspaper in the county, the Delta Courier. By 1880 the population had reached 5,597, including 598 African Americans. Fifty percent of the residents were native Texans. Education had become a more important issue during Reconstruction, and by 1880 the number of schools had increased from nine to almost thirty.”

“Though the county had many small communities, the only towns were Cooper, Charleston, and Ben Franklin. Nine manufacturing establishments were in operation. The seven churches were predominantly Methodist. A new courthouse was constructed in Cooper, and Confederate and Union veterans planted pecan trees on the town square to symbolize the end of animosities. Development also extended to agricultural and herding pursuits.”

“The large numbers of cattlemen and the upsurge in farming resulted in fencing controversies that climaxed in 1883 with several fence-cutting incidents. The success of farming and herding was also complemented by a new interest in the lumber industry, and the wooded portions of Delta County became the sites of sawmills as well as shingle and furniture factories.”

“With the development of these industries, along with gristmills and cotton gins, crops and timber could be processed locally, but many county businessmen were interested in finding a method for shipping more goods to distant markets.”

“In 1920, 2,191 county residents were farming. The majority, 67 percent, were sharecroppers, and of these 1,469, eighty-two were black. That year county farmers produced more than 491,000 bushels of corn, 26,654 bales of cotton, and 9,047 bushels of oats. Potatoes had become the most important truck crop, although fruits were also marketed. The numbers of both cattle and swine had dropped considerably, however, and livestock production continued to decline throughout the decade because of a decrease in prices. In order to compensate for lost income, farmers began to produce even larger cotton crops.”

“By 1926, however, the prosperity of the early twentieth century was beginning to give way. That year the cotton crop failed, and citizens were forced to withdraw their savings from local banks. The First National Bank in Cooper closed in 1927, and even though it reopened two months later the economy of Delta County had been heavily damaged. Most citizens, relying on the income from the projected harvest, were deeply in debt. Bank capital had been drastically curtailed, making more loans almost impossible to obtain. By 1928 the Texas Midland Railroad sold out to the Southern Pacific Corporation. Although farmers grew more cotton in the hope of recouping their losses, prices continued to plummet. Lumber companies had exhausted much of the timber in the area, and the few that survived could not afford to continue through such hard times. It was as if Delta County had got the jump on the Great Depression.”

“Many of the young people who left the area during [World War II] chose not to return, and others moved to urban areas, particularly Dallas, in search of jobs.”

“In 1966 more than 50 percent of Delta County remained rural. Cooper was the largest town and the center of local activities. It had two elementary schools, a junior high, and a high school. Two small airfields were located nearby. Major employers included the schools, a battery and generator plant, five cotton gins, eight cottonseed cleaning and processing plants, a locker plant, the Lone Star Gas Company, Texas Power and Light, and two hospitals.”

Cooper was “put on the map” again in 2011, when the Texas Rangers featured Mabel Wheat, long time resident of the town and worker of over sixty years at Miller’s Drug Store (on the square), in an article about the team’s most dedicated fan.

When I first came through Cooper in January 2011, I unknowingly ran into Ms. Mabel (who had yet to become “famous” beyond Cooper), and she told me stories about her city in the 20s and 30s and the old Delta County Courthouse. These helped me to get a view of the original Cooper and Delta County’s particular piece of courthouse history. In December 2013, when I went back to Cooper, we went to Miller’s, but unfortunately, she was not working that day.

Wherever you are, ma’am, thank you for inspiring me to research the history of these courthouses, and to care about each one. As I well know now, it’s not just those still standing that tell the stories of their towns, but all of their many historic predecessors as well.

*I’d like to dedicate this page to Ms. Mabel Wheat and her memory.* 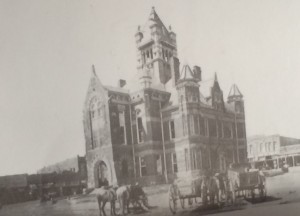 This grand 1899 courthouses once stood three stories over the Cooper square. I was told by Ms. Wheat that it was demolished during the Great Depression for the sole purpose of providing work for the unemployed men of the county.

The current courthouse was built just off the square as a WPA project as well.

Architect Hoke Smith provided the designs for this Moderne courthouse. 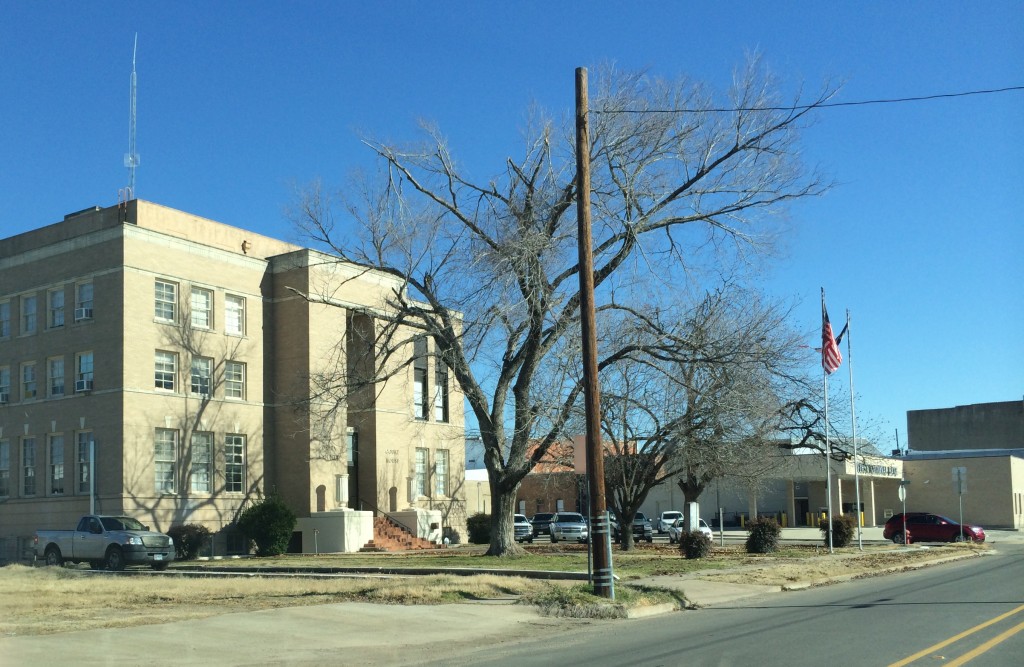 When entering Cooper via Highway 154/W Dallas Street, one passes the courthouse before entering the Cooper square. 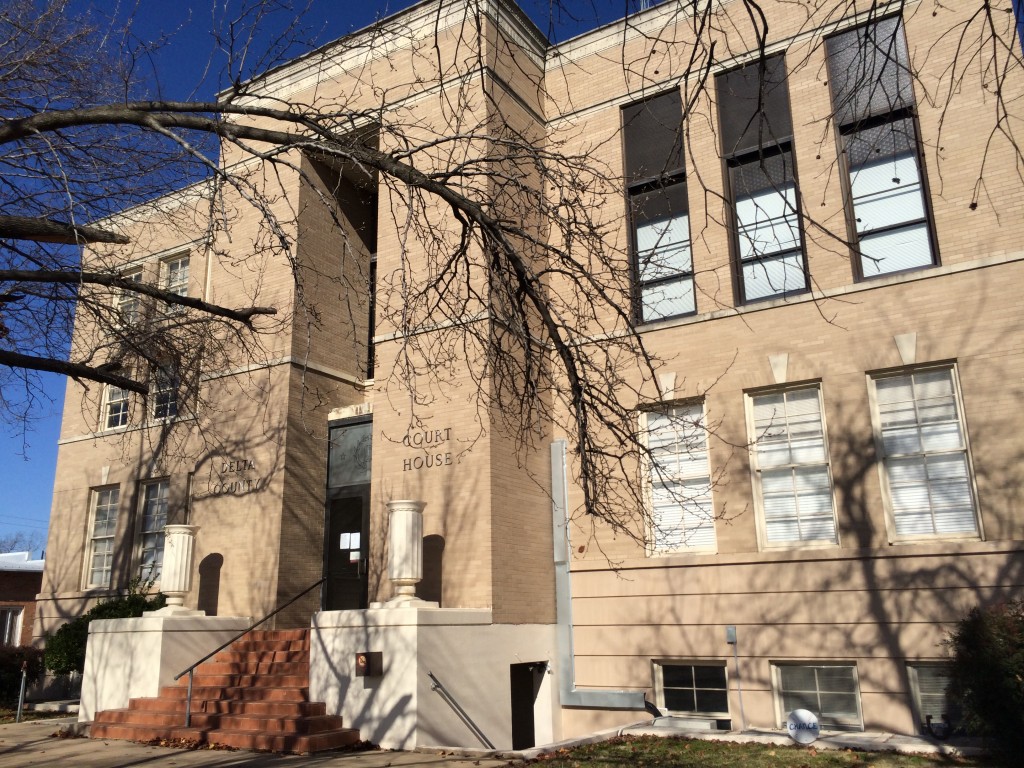 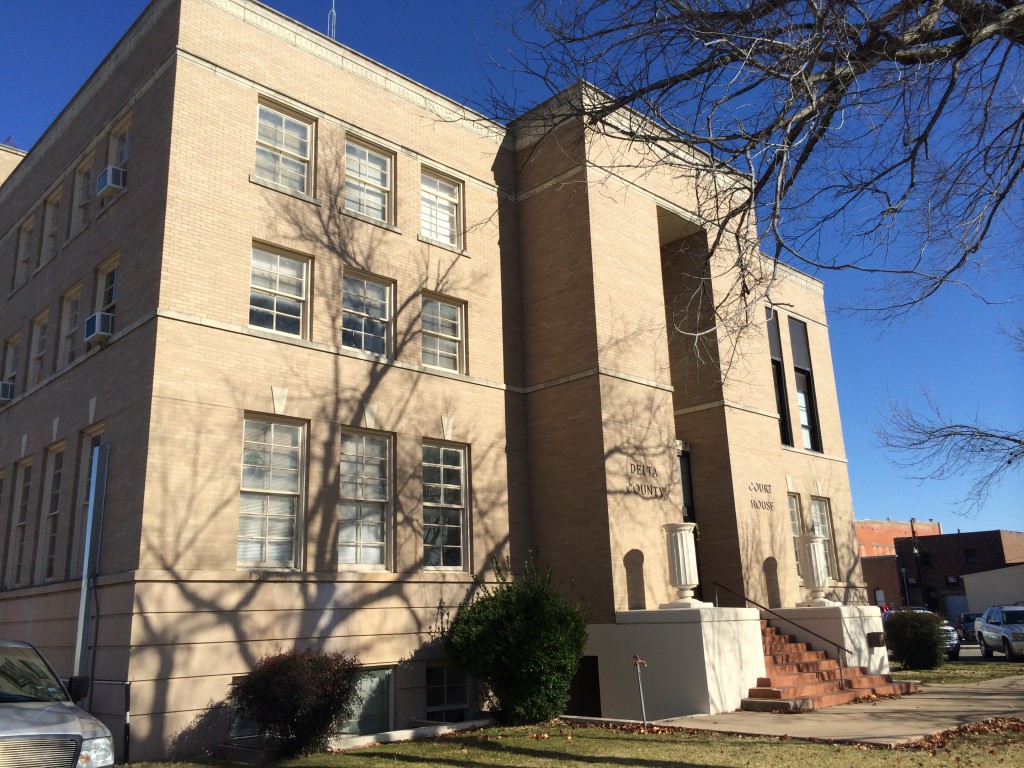 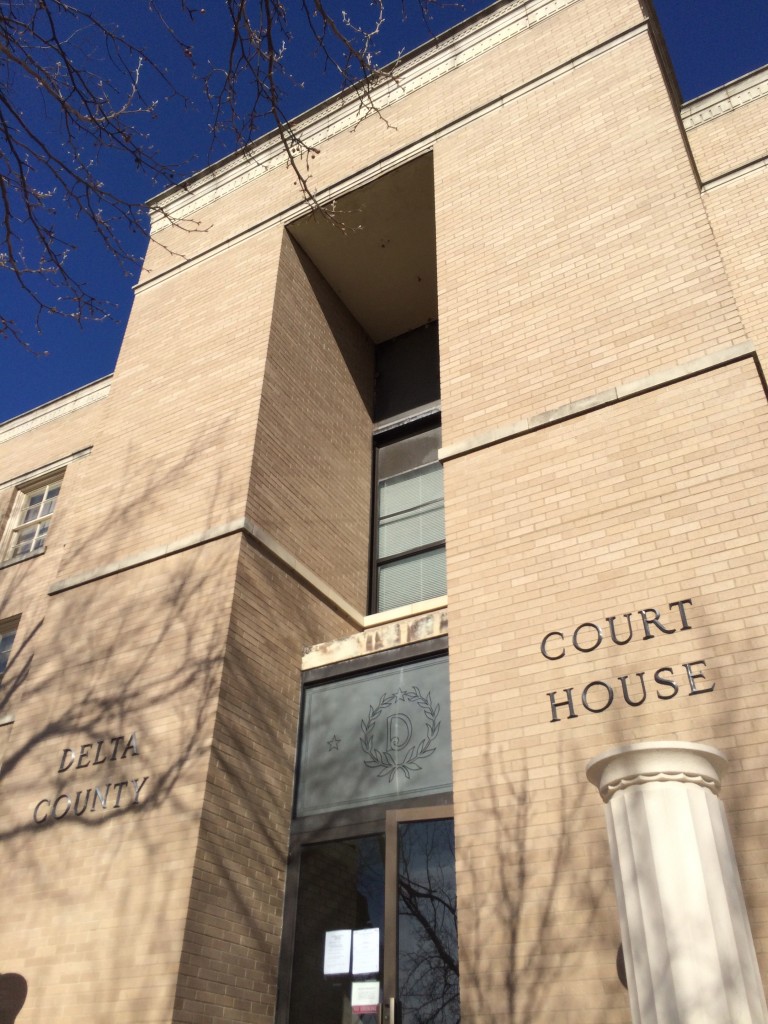 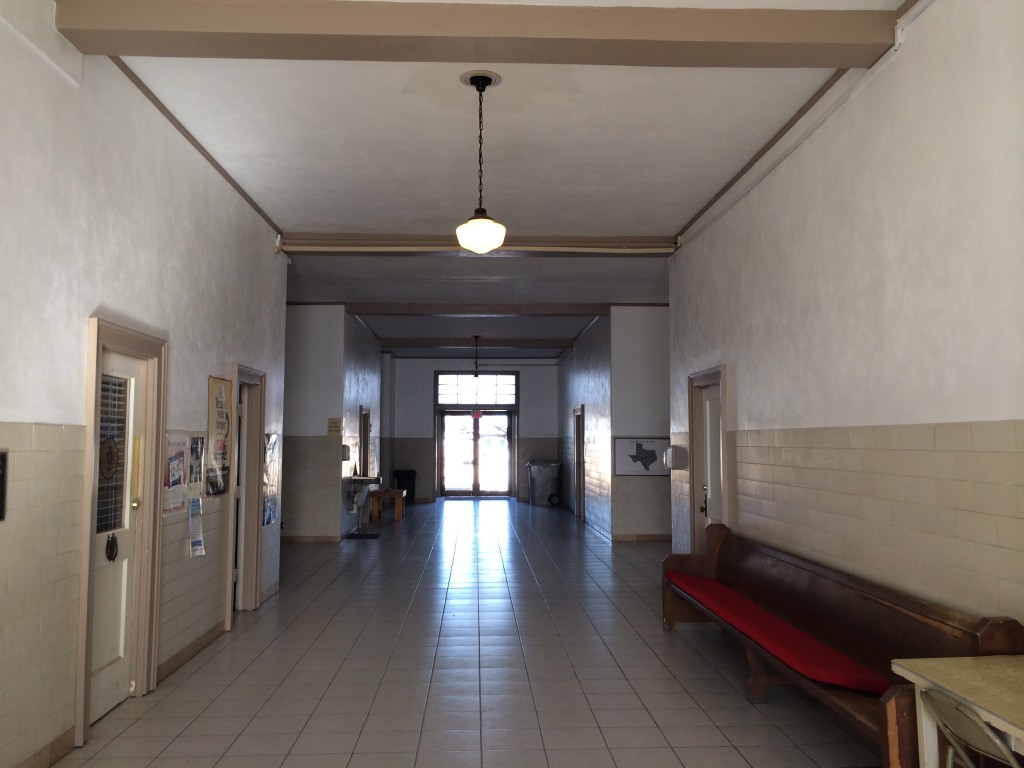 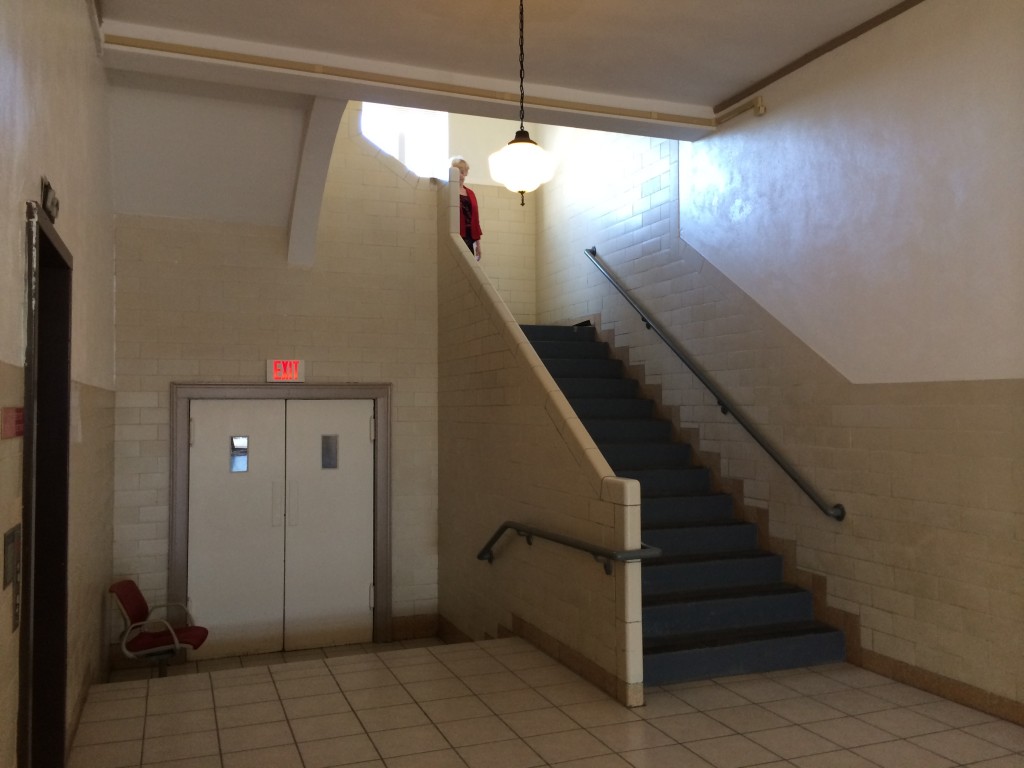 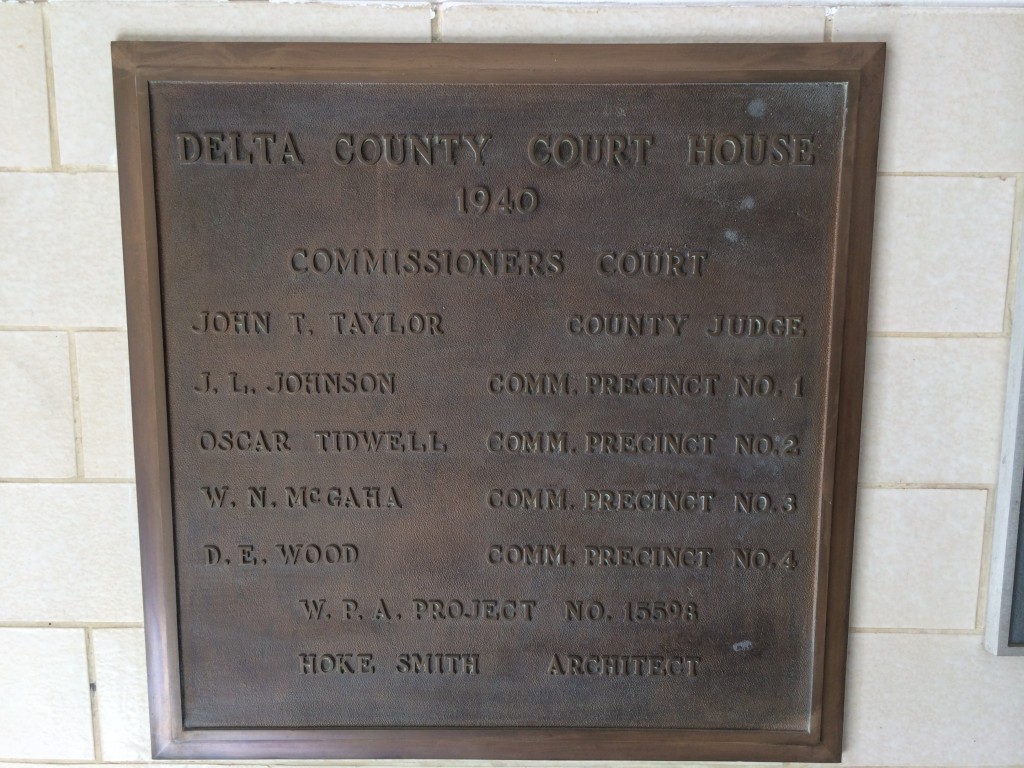 Perhaps one of the most depressing WPA projects in our state 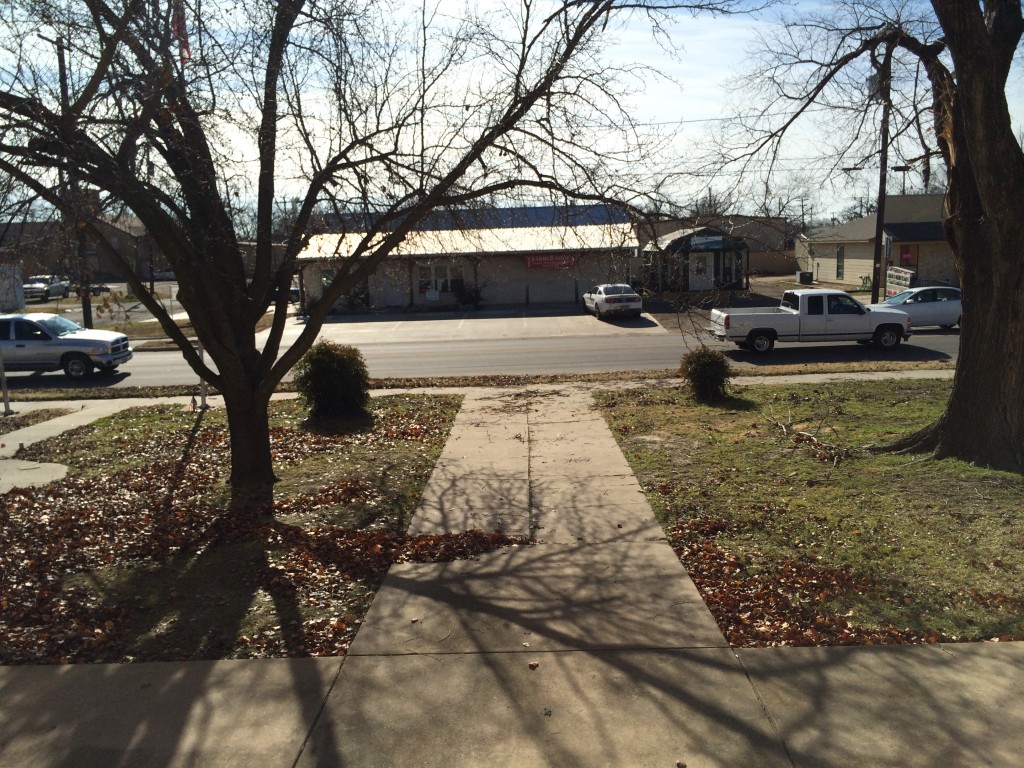 A barber shop stands on the opposite side of the road from the courthouse.

The eastern side faces NW 2nd Street (and yes, there are NE, SE, and SW 2nd Streets) 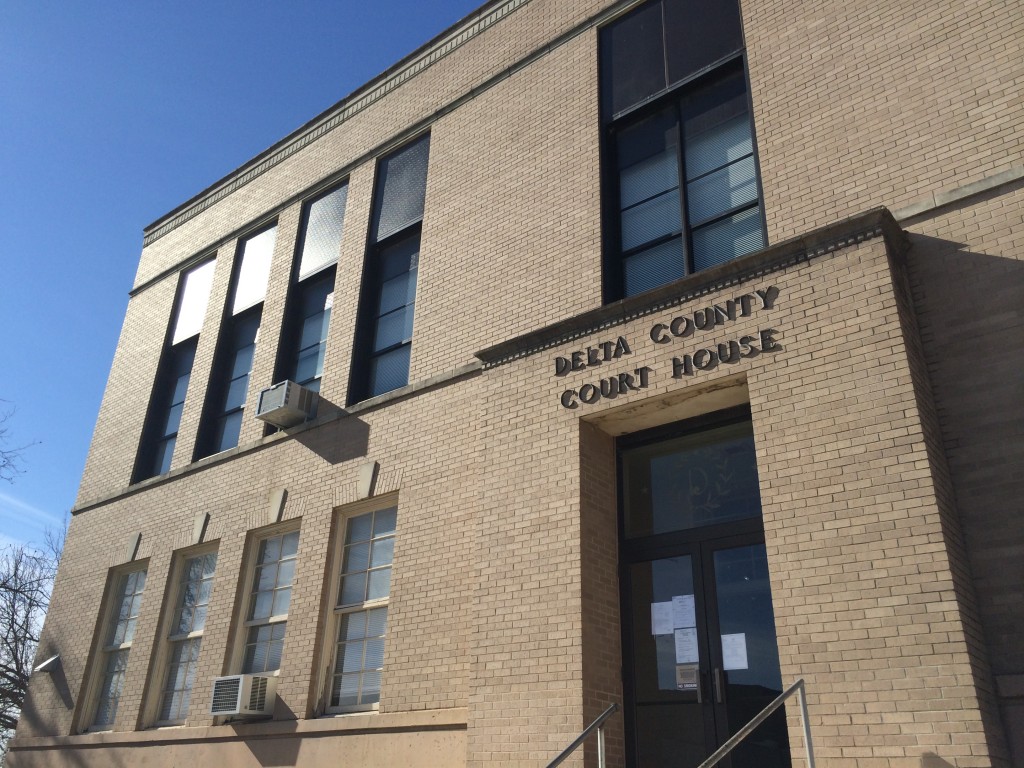 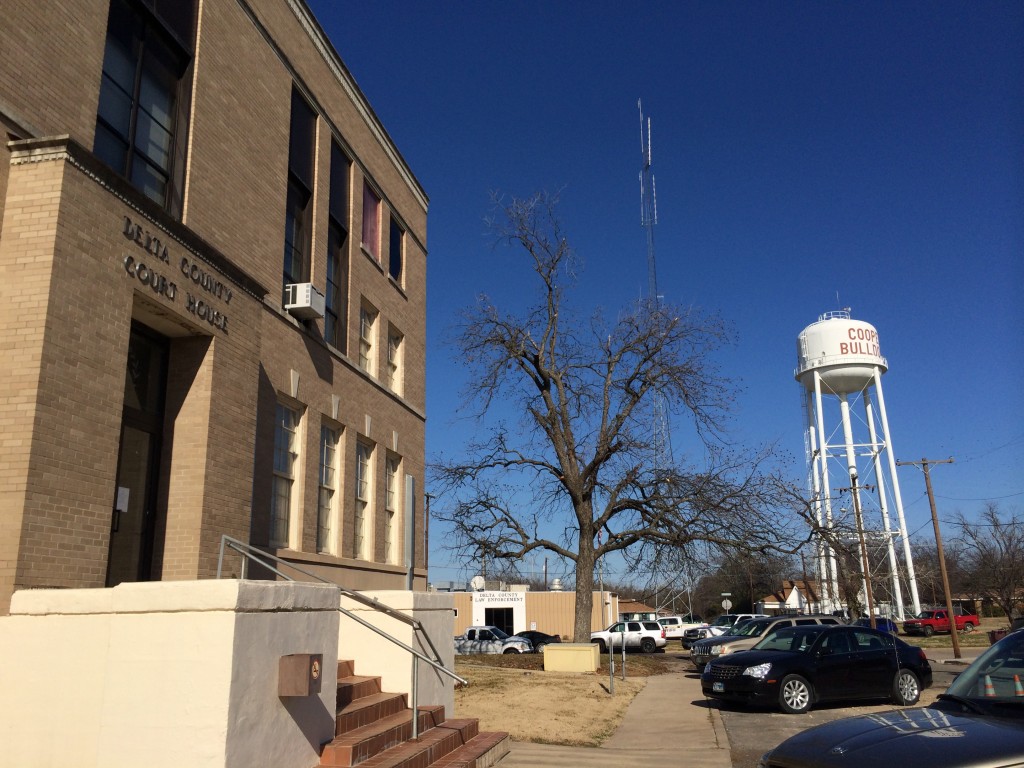 I’d say the eastern entrance is part of the most appealing side of the courthouse (if there even is one). 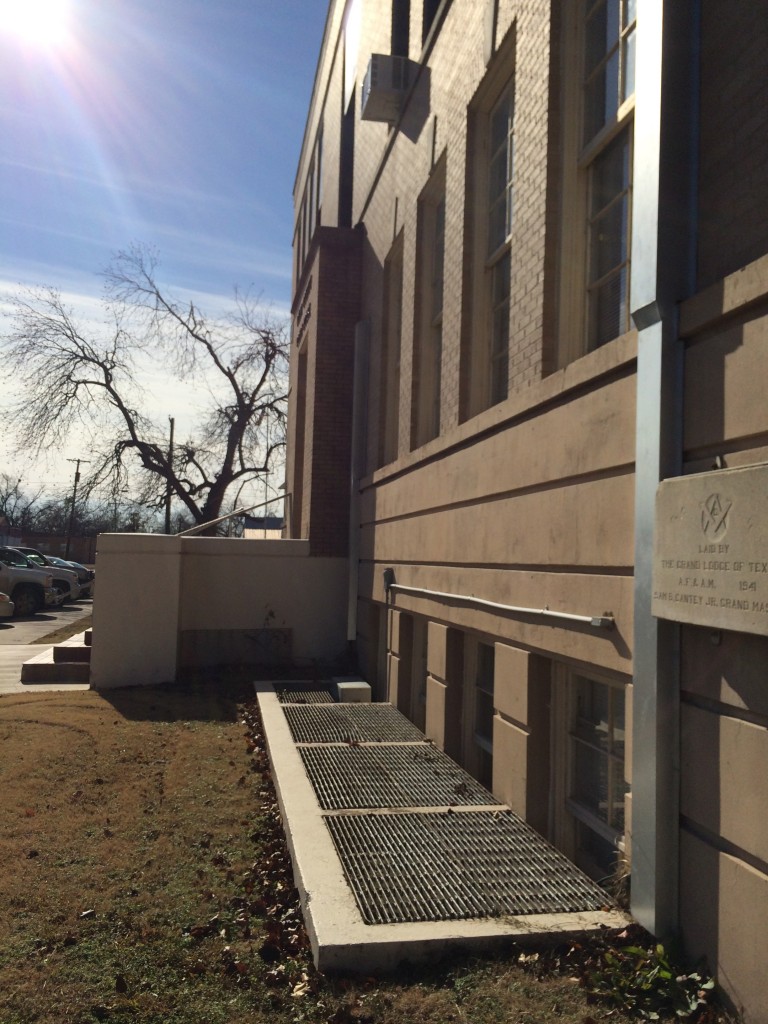 The “cornerstone” is not on the corner. It was perhaps moved from an original spot, as it is now mounted on the wall to the right of the eastern entrance. 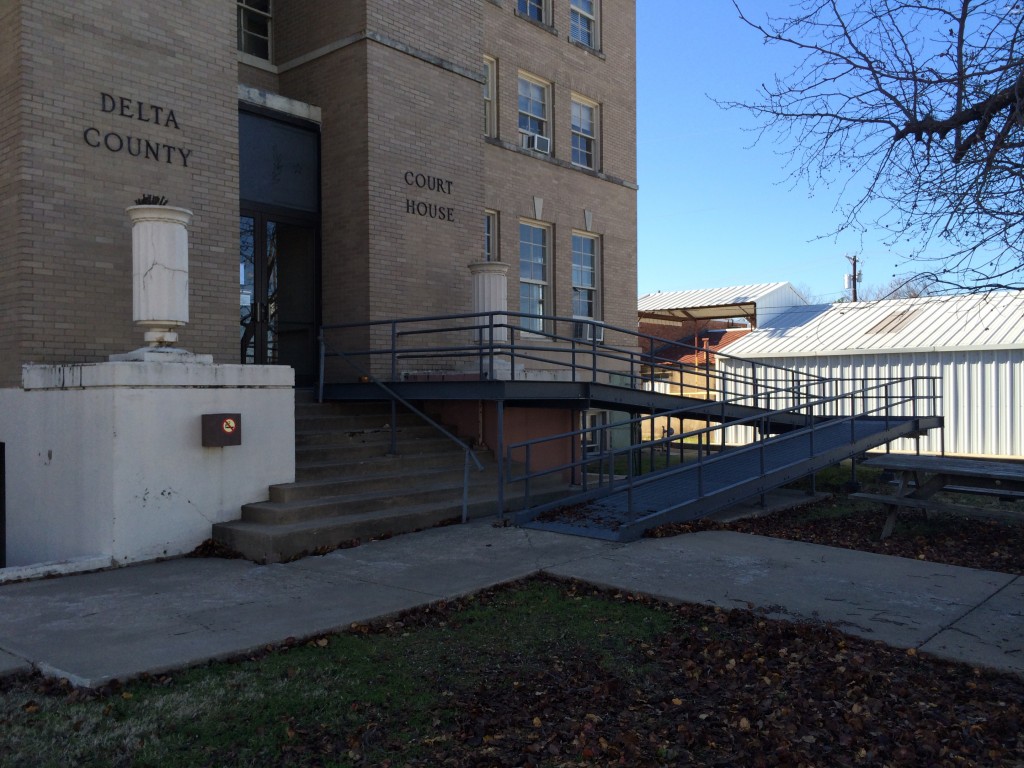 A handicap ramp was installed on the northern side in 1986. 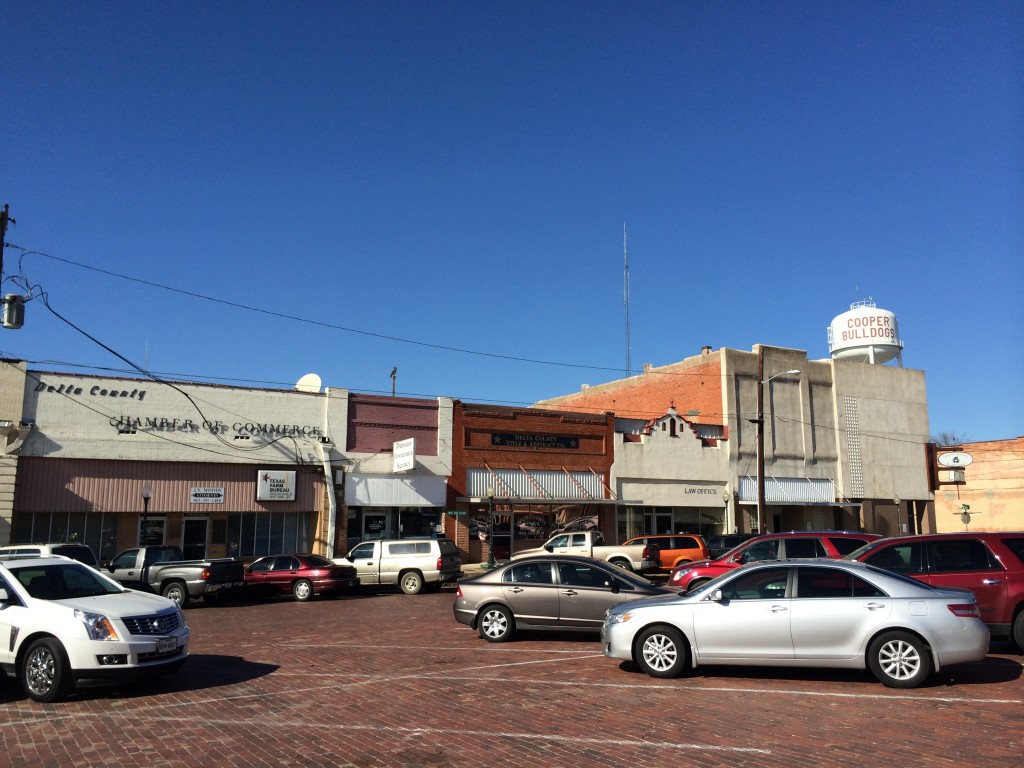 On the adjacent town square 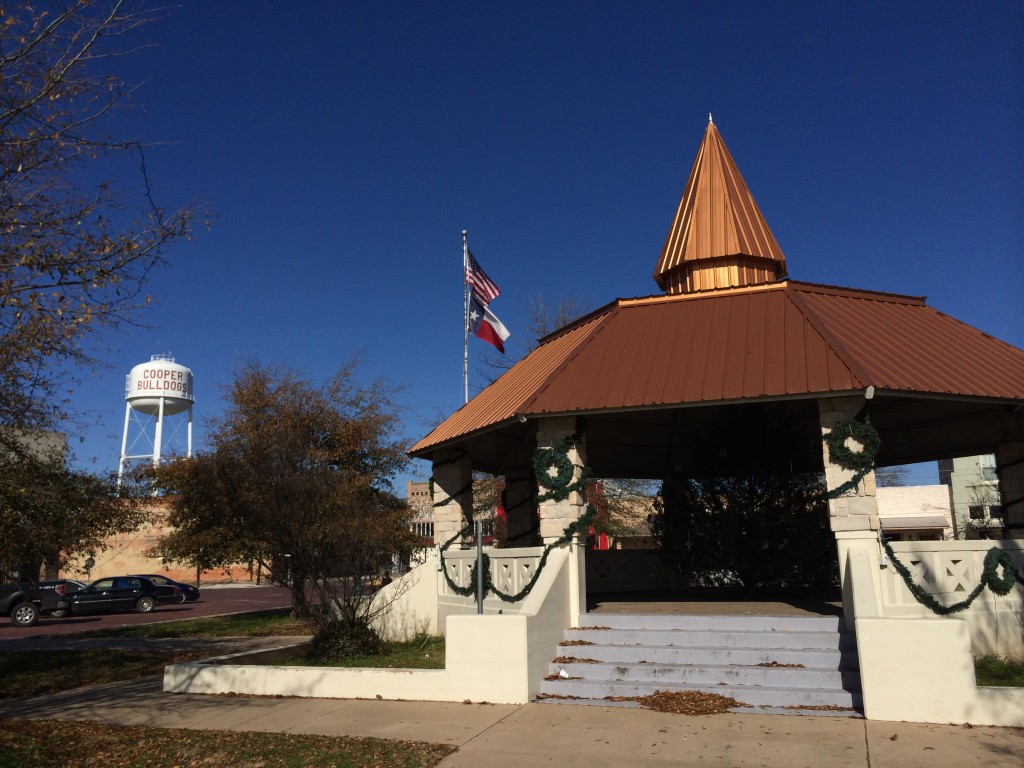 The gazebo stands on the original site of the 1899 courthouse. 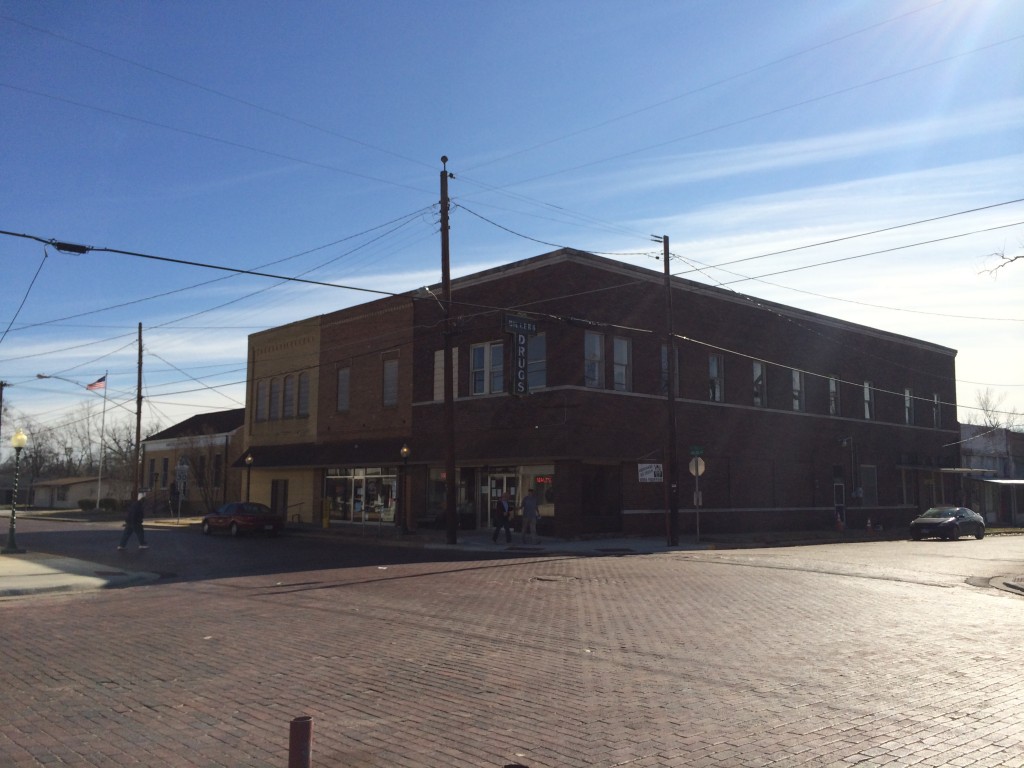 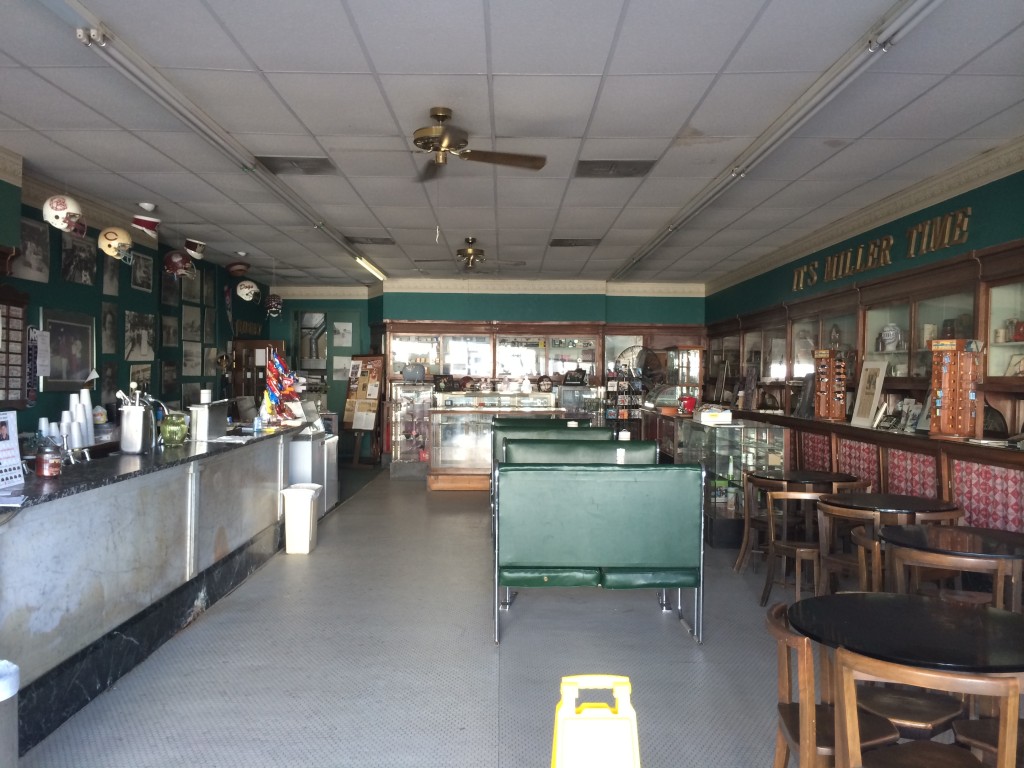 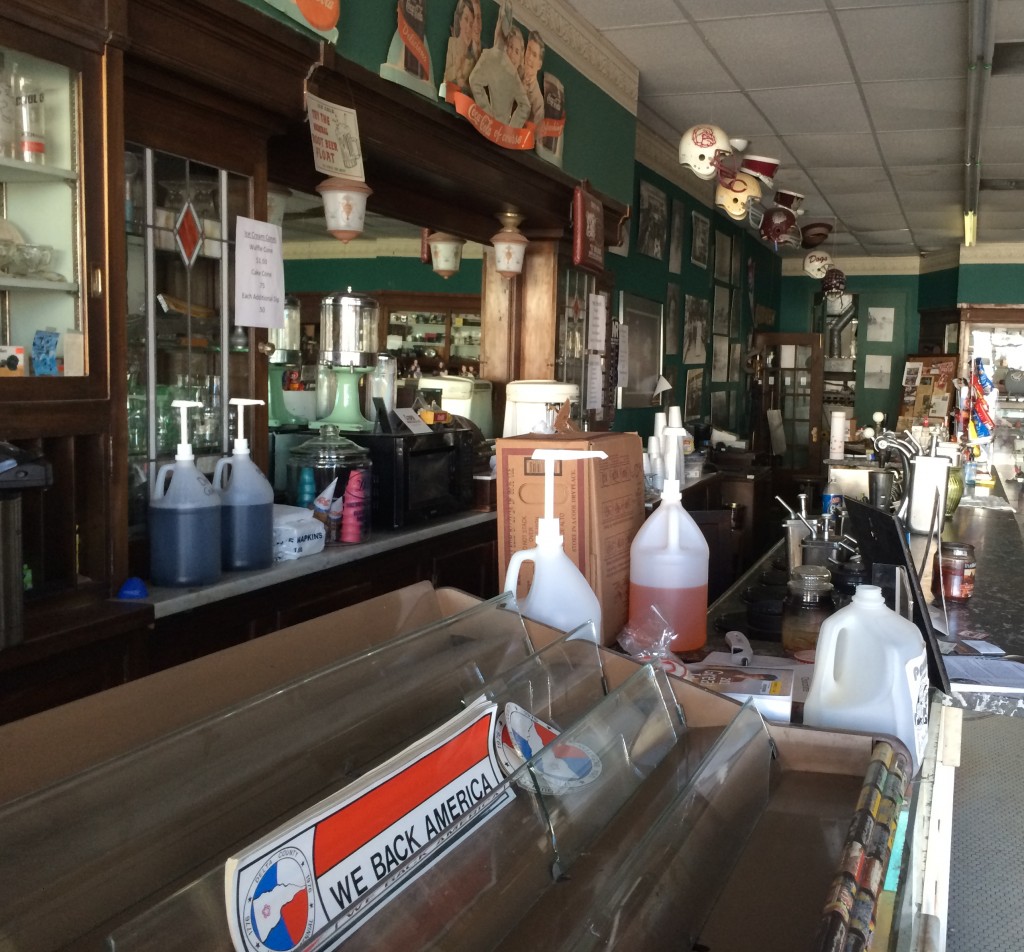 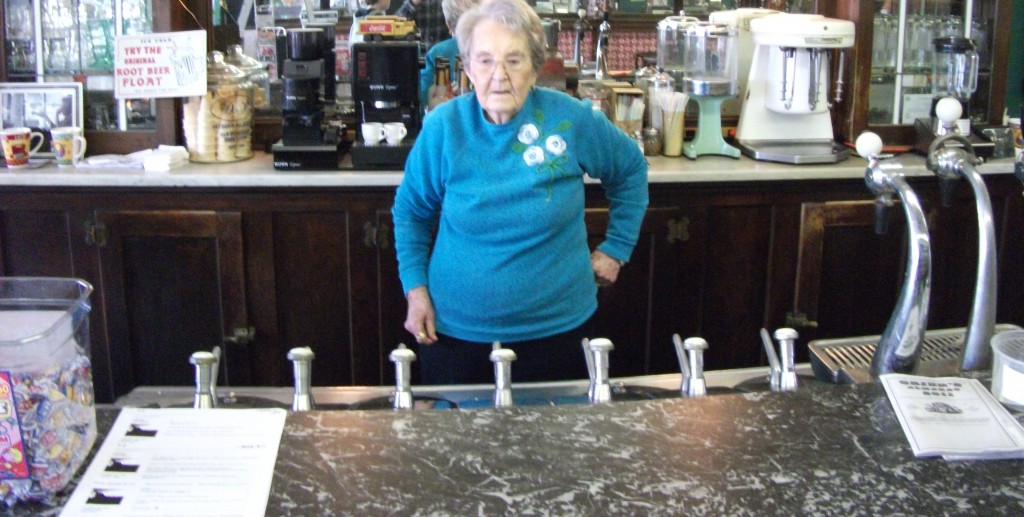 Ms. Mabel Wheat, Miller’s employee of more than 60 years, was such a treat to talk to. May she rest in peace. 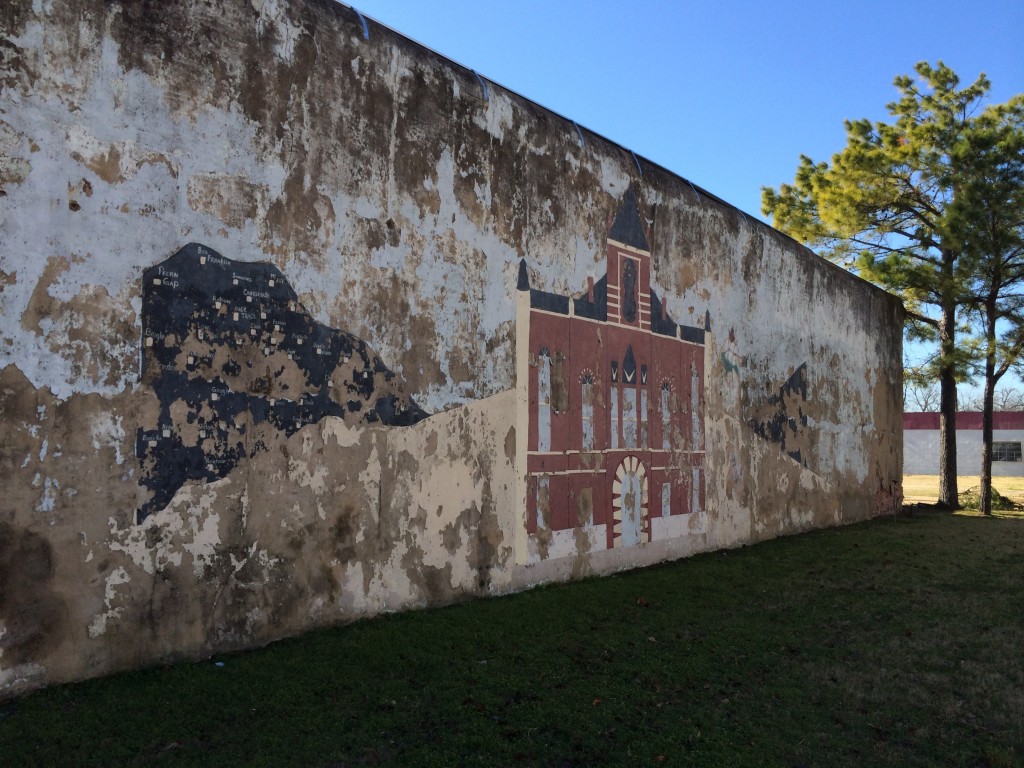 A mural paying tribute to the 1899 courthouse