“Freestone County is located in east central Texas in the center of a group of counties once known as the Trinity Star.”

“Freestone County covers 888 square miles of coastal plain upland with an elevation ranging from 600 to 900 feet above sea level.” 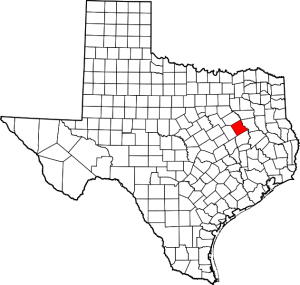 “The area is timbered with mesquite on the west, while the eastern half has almost every variety of oak, hickory, and walnut; there is a also scattering of pine groves on the western bank of the Trinity River, which provides drainage for the entire county, with the exception of a small area in the southwest, where runoff finds its way to the Navasota River.”

“One of the first to secure a grant was David G. Burnet, whose land lay in the area that later became Freestone County. Under the terms of his grant, Burnet was authorized to settle 300 families in the area within six years. Little progress was made in executing the provisions of the contract, however, until after 1830, when Burnet joined with other empresarios to form the Galveston Bay and Texas Land Company.”

“After the establishment of the Republic of Texas in 1836, the land company’s rights to land in the area were terminated, and all lands not previously assigned became part of the public domain. During the early years of the republic period the area that is now Freestone County was considered Indian land and therefore dangerous; very few whites ventured into it until the Indian Treaty of 1843.”

“Since the population of Limestone County was rapidly expanding, in 1850 the Texas legislature divided it to form Freestone County. By 1851 the county had been organized; the town of Mound Prairie, in the center of the county, was chosen to be the county seat, and its name was changed to Fairfield.”

“Poultry had also become significant in the local economy; by the turn of the century farmers owned almost 112,000 chickens, which produced about 387,000 dozens of eggs that year. Agricultural activity was further encouraged in 1906, when the Trinity and Brazos Valley Railway was built across the county and partially solved the transportation problem, and the economy continued to grow during the first two decades of the twentieth century despite a boll weevil infestation that plagued farmers beginning in 1903.”

“Oil was first discovered in the county in 1916, and petroleum and natural gas production contributed to the area’s economy into the twenty-first century.”

“Lake Fairfield, in the north central part of the county, provides recreation for residents and visitors, and many historic sites are preserved throughout the county.”

The first time I came to Fairfield, I photographed the courthouse right after sundown, meaning that the remaining light was very scarce and the pictures did not turn out well. I was able to come back a second time, but unfortunately, the entire square was covered with Christmas lights and decorations. I re-photographed the building anyway. You’ll find my pictures to be full of holiday cheer.

I came to Fairfield and photographed the courthouse in the dark on October 12, 2013 and returned to take pictures of both the courthouse and Fairfield’s Christmas decorations on November 22, 2013. 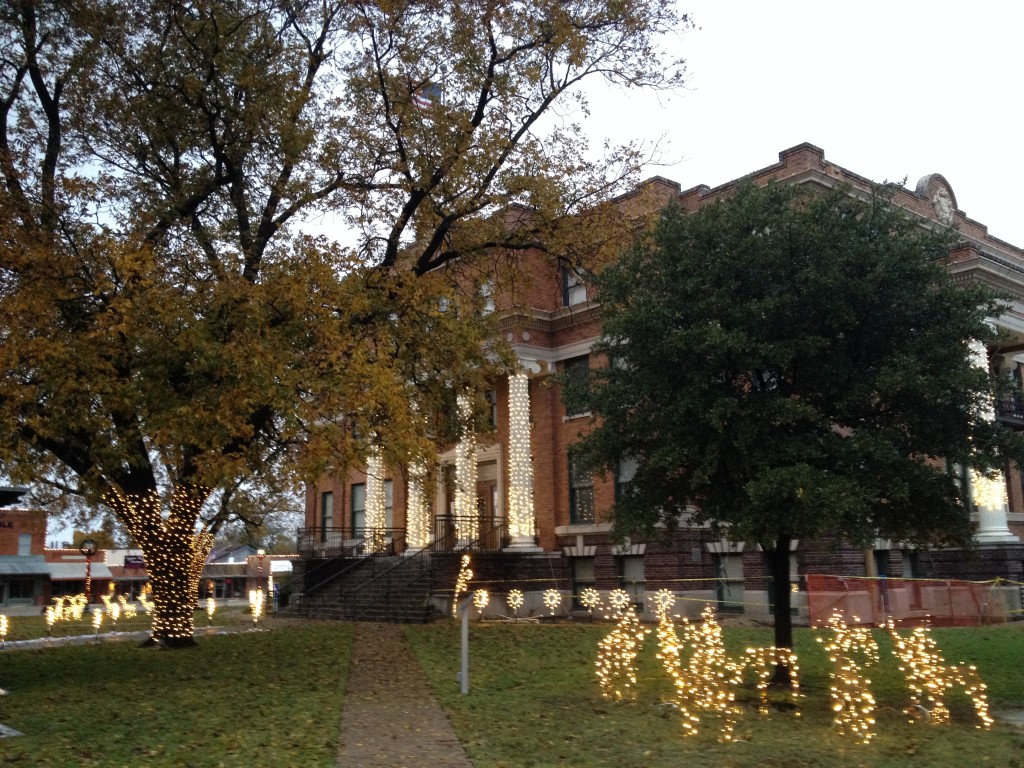 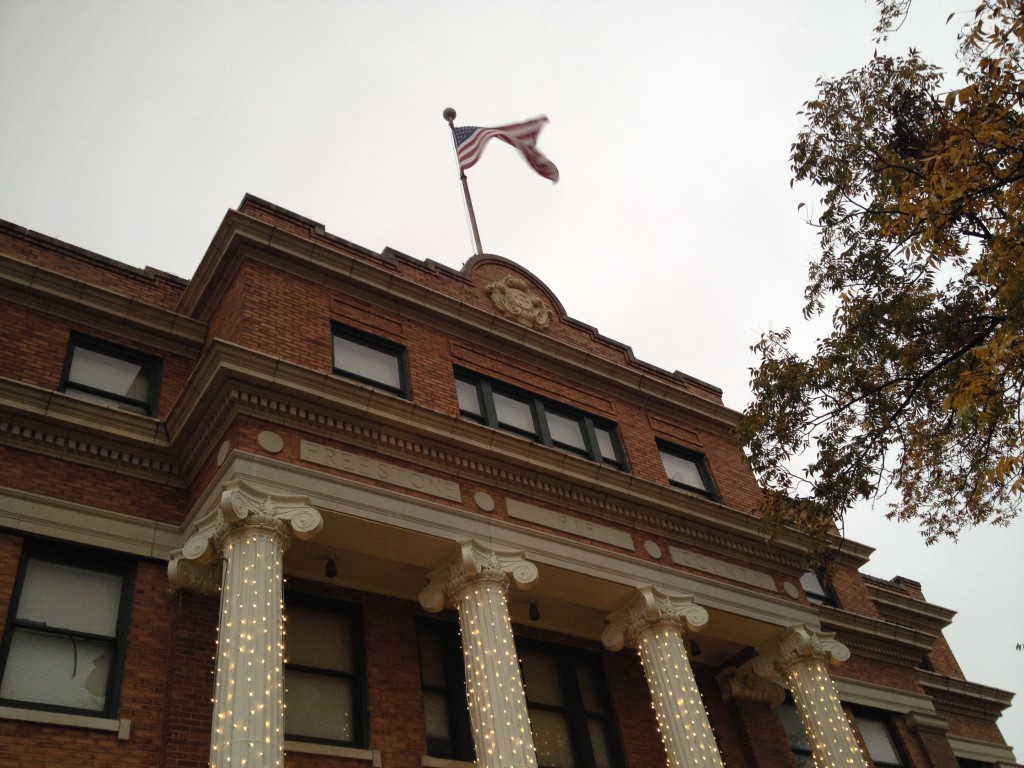 The ornamental F at the top of the pediment on the south side is a feature similar to the P on the courthouse in Parmer County, constructed by the same contractor, William M. Rice. 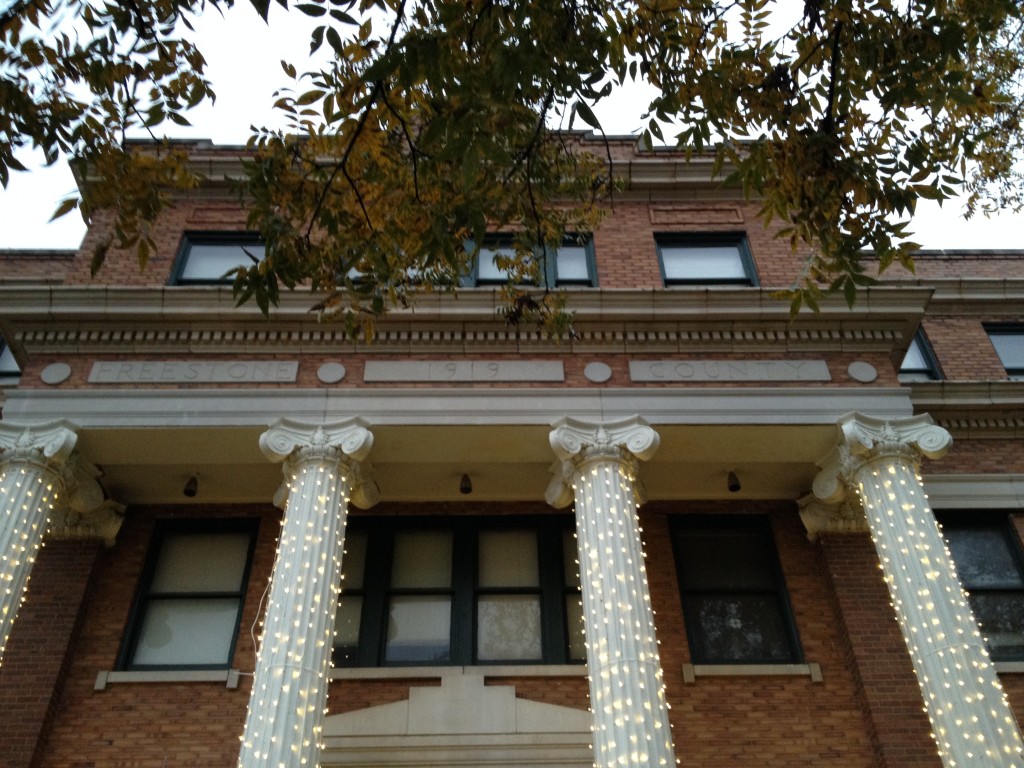 Interesting windows on the south side 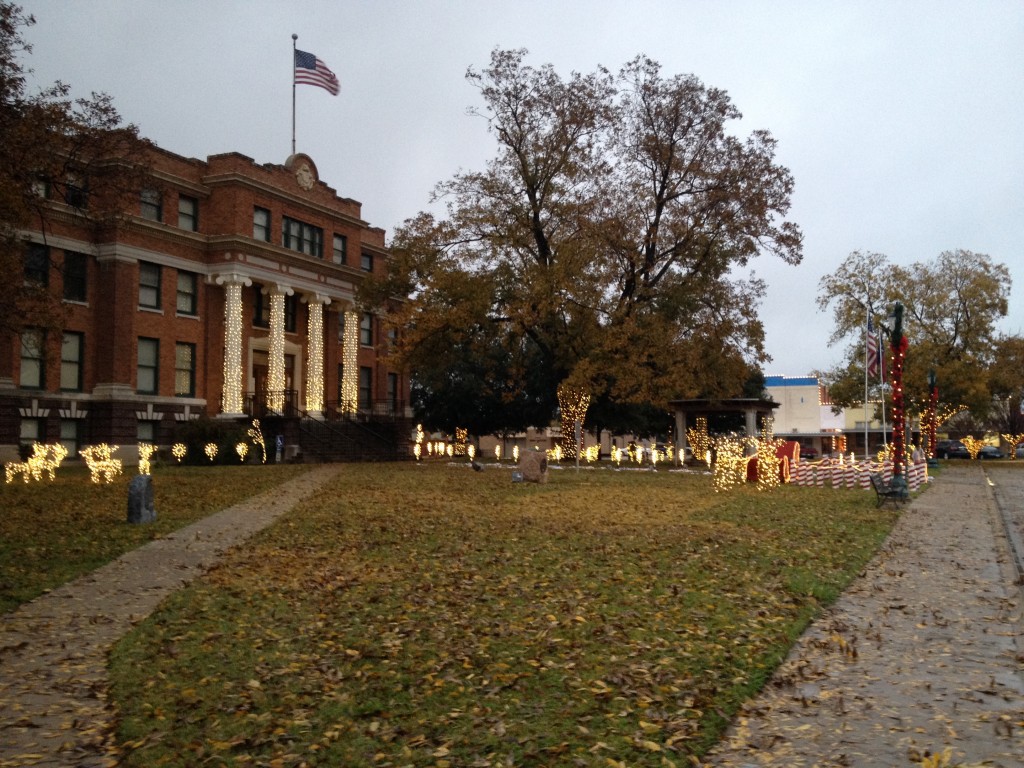 It was a cold, wet, muggy day in Fairfield. 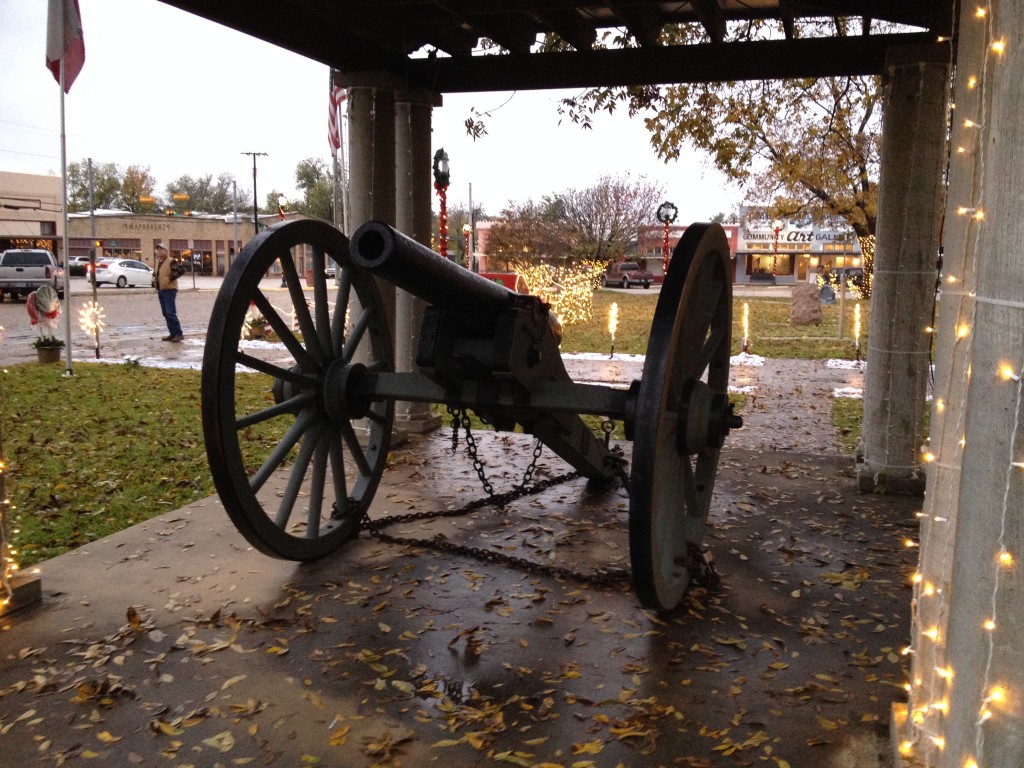 An actual cannon from the Battle of Val Verde (part of the Civil War) is displayed on the courthouse lawn. 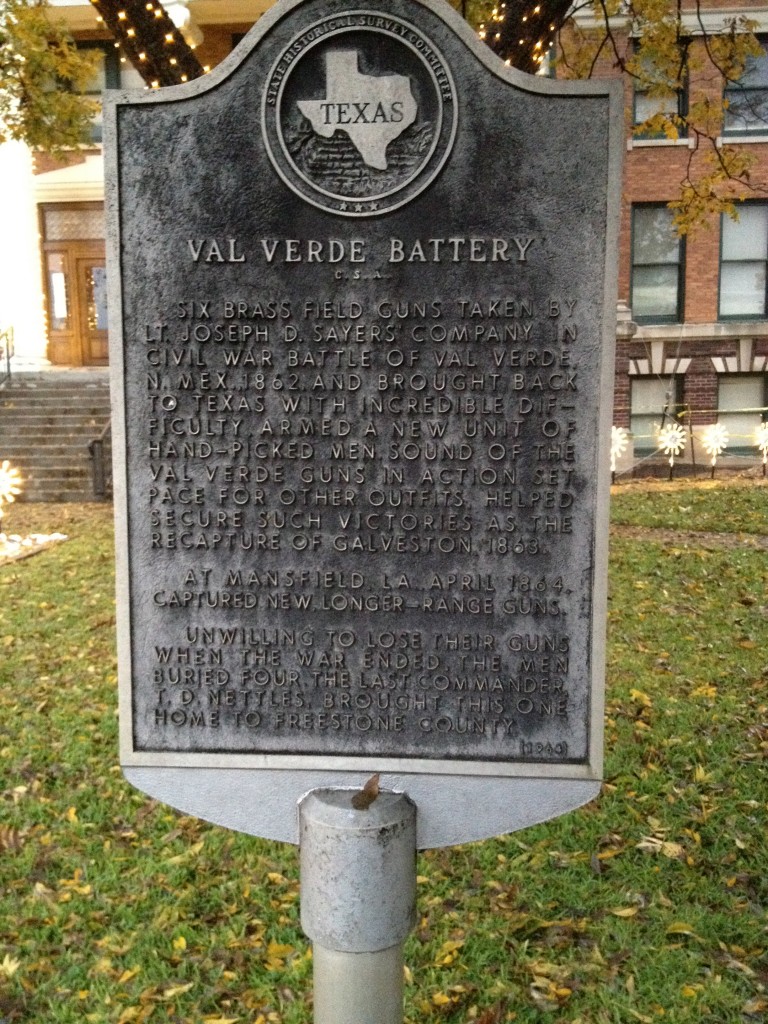