On Friday, May 2, 2014 we left the Metroplex area en route to Houston for a wedding. We took Highway 287 through Waxahachie to merge with I-45 in Ennis. Waxahachie and Ellis County are on my re-photographing list, but we didn’t have time to stop for “just a redo.” We followed 45 through Corsicana, Fairfield, and Centerville, all county seats already on my list until reaching Madisonville, seat of Madison County. Geographically, Madison County lies between Leon County to the north and Walker County to the south (county seats of Centerville and Huntsville, respectively). It was a wonder then, that I had not yet acquired the Madison County Courthouse.

In October 2013, we took a trip down to the same region of Texas, completing our “Texas Revolution Trip” that was started in March 2012 when we saw Gonzales, Goliad, and San Antonio. This time we planned on visiting Washington-on-the-Brazos and San Jacinto. The drive down from Granbury went through Cleburne to get on I-35 in the nearby city of Alvarado. From Alvarado, we continued south to Hillsboro, before exiting 35 and crossing country to Corsicana to jump on 45. It was at this time that I rephotographed the Navarro County Courthouse. We arrived in Corsicana around 4:50 PM meaning that the courthouse was set to close in ten minutes’ time. I was rushed to gather the photos I needed. To my dismay, I realized that the whole string of courthouses I’d planned on getting along I-45 would be closed, and thus I could only photograph their exteriors. I tried not to let this get me down.

We stopped for dinner in Fairfield, seat of Freestone County and while we sat in the restaurant, I slowly came to understand that the sun was beginning to set. By the time we finished dinner, darkness had settled around the courthouse and the pictures I took in vain were of no good to me. So, I planned on returning to this area of Texas to get them when the sky was lighter. That also meant that Centerville, Madisonville, Huntsville, and Conroe were all out of the question, for tonight at least. The next day, we drove back up 45 from Houston to stop first in Conroe and then in Huntsville before heading west to see Washington-on-the-Brazos and acquiring the courthouses in Grimes, Washington, and Austin Counties. That’s a whole different blog post.

The next month I returned to this area after first visiting Kaufman, Henderson, Anderson, and Houston Counties (seats being Kaufman, Athens, Palestine, and Crockett respectively). At this time, I got to see Leon County’s Courthouse in Centerville and revisit Fairfield before the sun set.

The point in telling all of this explains why I had not yet seen Madisonville. The courthouse of every county surrounding Madison County was already checked off the list, and yet this one remained. I made it my goal during this trip to visit Madison County and mark it off my list. Sure enough I did. It also helped that we needed to get gas right about the time we reached Madisonville anyway. We exited 45 and turned right to reach downtown, soon finding the 1960s-era modern building that graces the Madisonville square to be on our left. Luckily, the courthouse was still open at the time we arrived and I got to stick my head in. 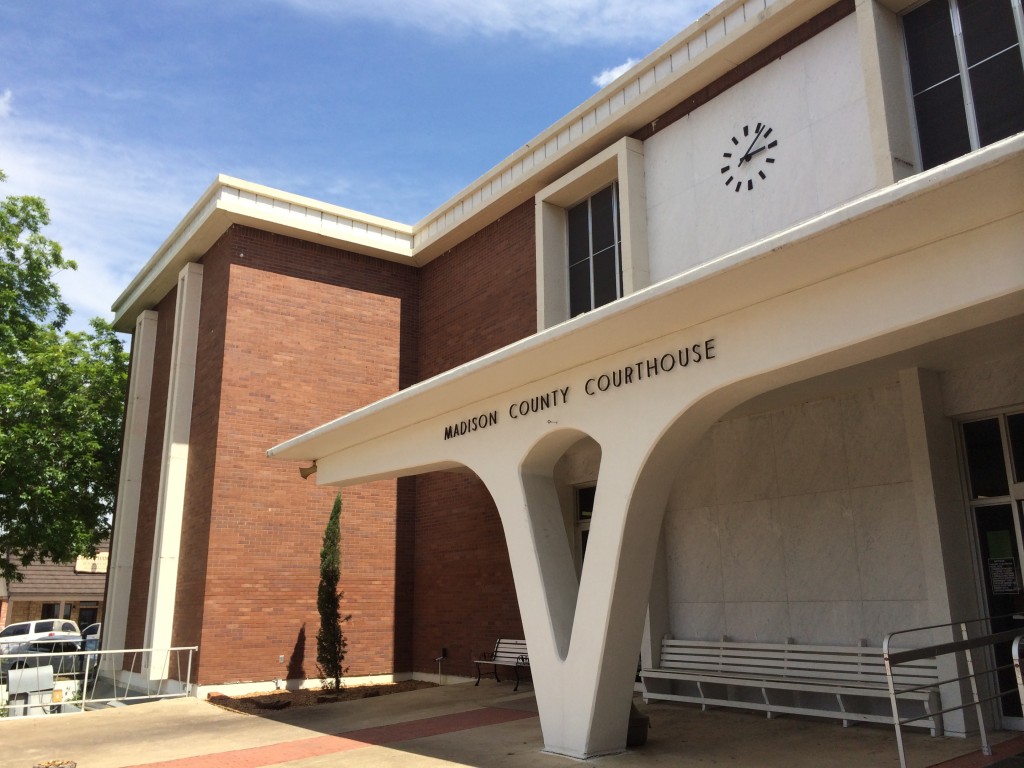 Leaving Madisonville, we followed 45 south again, until we reached Houston.

Wedding day, Saturday, May 3, came and the wedding party began its final preparations for the night’s event. I, meanwhile, headed downtown with my grandfather to rephotograph the very large, very historic Harris County Courthouse. It is a lovely building, that because it was Saturday, was unfortunately closed. But from what I could tell by looking through the glass on the front doors, it has a very impressive interior. My next stop in Houston was to see the historic Hanging Oak on the corner of Capitol and Bagby Streets in downtown. It is estimated that at least eleven criminals were hanged off of this tree around the time of the Texas Revolution. The city of Houston has thankfully preserved this nearly 400 year old tree. My grandfather and I had lunch at Katz’s Deli on Westheimer Boulevard, a location opened by the grandson of the owner of the original Katz’s in New York, featured in the movie When Harry Met Sally.

The next day, we left Houston at breakfast and followed Highway 290 to Hempstead to see if any “Hempstead watermelons” were ready to purchase yet. This offered me the chance to rephotograph the Waller County Courthouse and cross that redo off my list. I was thankful of that. I was not thankful, however, for the fact that Hempstead melon season had not quite started. 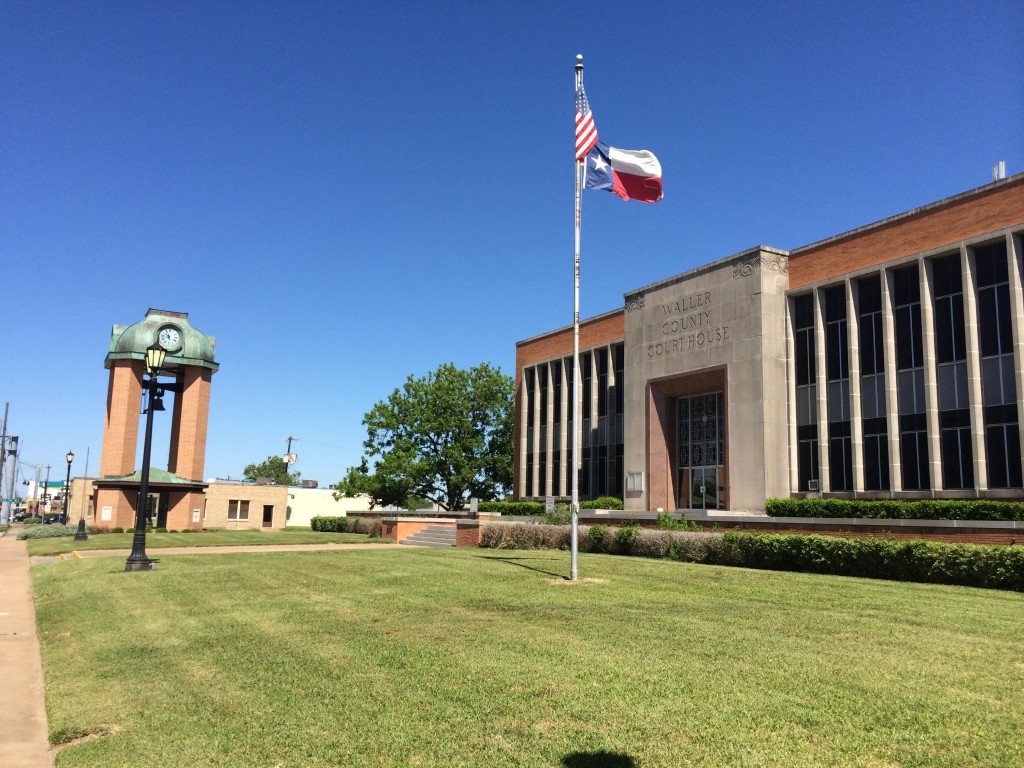 Because we were already off of I-45, we decided to head north via Highway 6, running through cities like Navasota, College Station/Bryan, Hearne, and Marlin, before reaching Waco. We stopped in Bryan to rephotograph #4, and this time I found that the cornerstone of the original courthouse was present on the grounds. This is why redos are beneficial. You always find something new.

We made a detour off of 6 east on Highway 79 to Franklin, seat of Robertson County. Robertson County was similar to Madison County in the respect that I had already been to nearly all the counties surrounding it. The courthouse there was recently restored by the THC and looks great! I finished photographing #145 and then had lunch at a restaurant on the square called Lone Star Burger Bar. 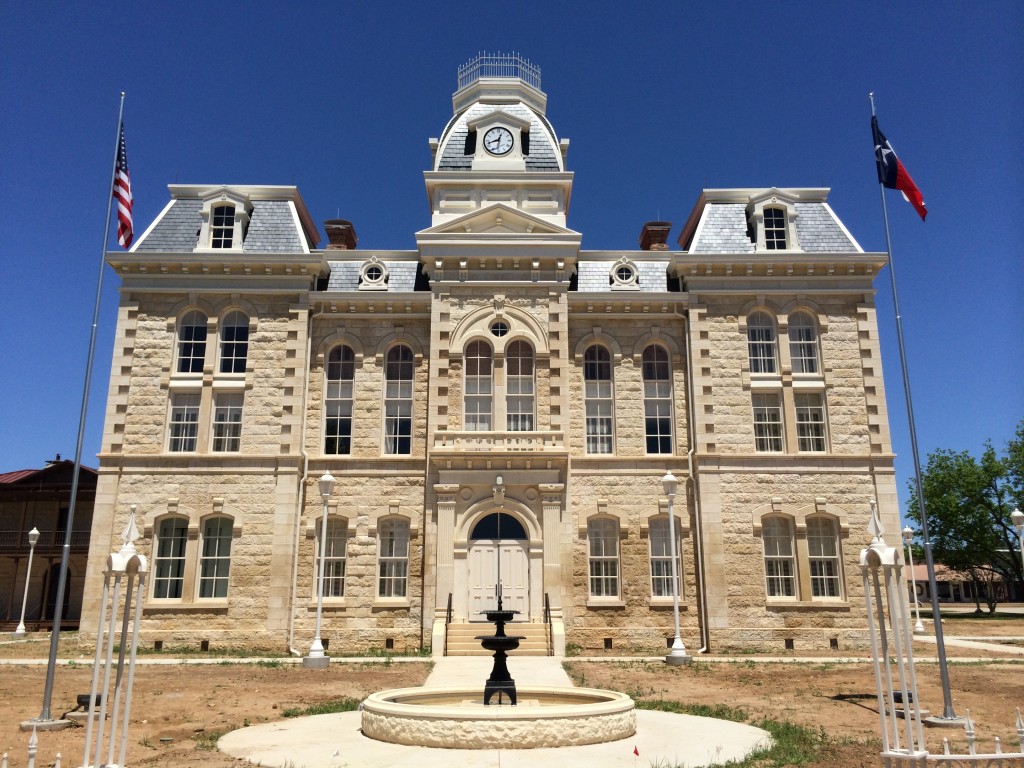 Leaving Franklin, we followed a county road to the city of Calvert located along Highway 6 where one can find a retired Robertson County Courthouse that now functions as a bed and breakfast called the Hammond House. I added Calvert to my collection of retired courthouses, which includes Sherwood and Rayner.

My last stop of the day was in Marlin to rephotograph #3, Falls County. I was very pleased with my photos of the courthouse this time in comparison to the original run. All in all, despite the majority of these courthouses being closed at the time of my visits, it was a very productive trip.