Today’s goal was to revisit eight of the nine courthouses that I first visited on January 8, 2011.

We left the house at roughly 8:16 AM, stopping only for breakfast in the time it took us to leave Granbury and arrive in Weatherford, #12. Having it been almost a year since I started the redo process, it was surprising I had not been up to see the Parker County Courthouse yet. 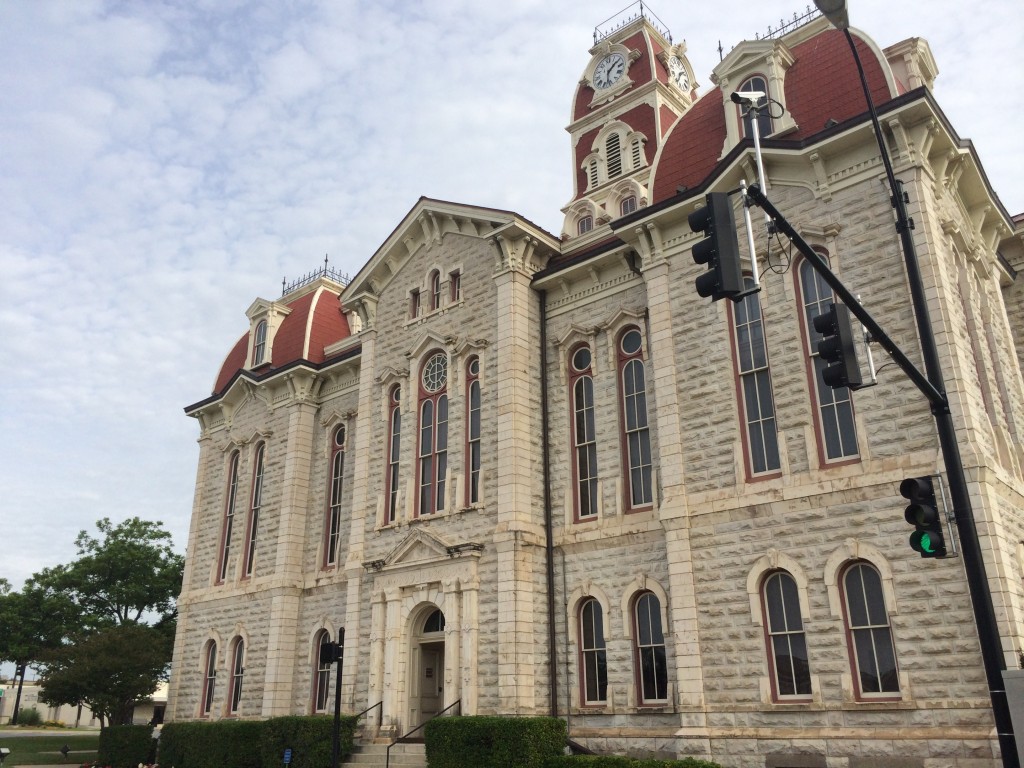 I took care of that problem quickly so we could head on north, to Wise County and Decatur. The courthouse there is a massive creation of James Riely Gordon that could be seen for a few miles away. By chance, we followed the right combination of roads to get us to the “Texas Tourist Camp,” a small “city” of petrified wood buildings on the edge of town. 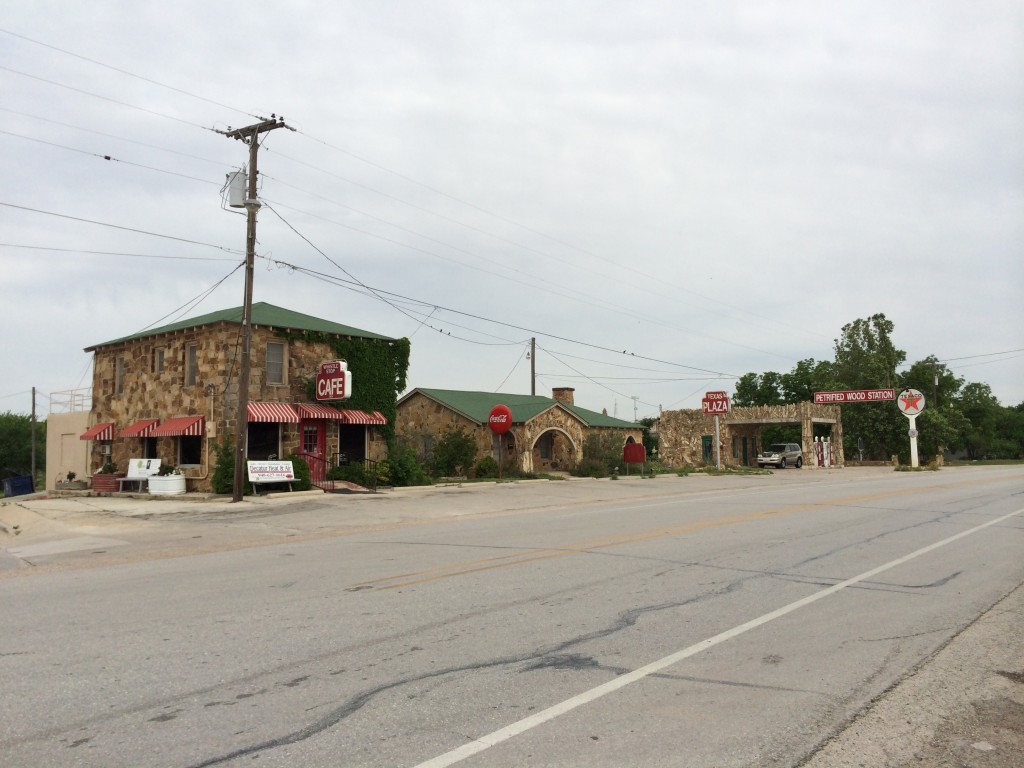 Having photographed that, we moved closer to downtown only to see a soaring building appear to our right, the opposite direction of the courthouse. Eager to see what it was, we followed a small road up a hill to find a deserted mansion partially hidden by trees in a yard surrounded by fencing and NO TRESPASSING signs. A padlocked gate read: El Castile. 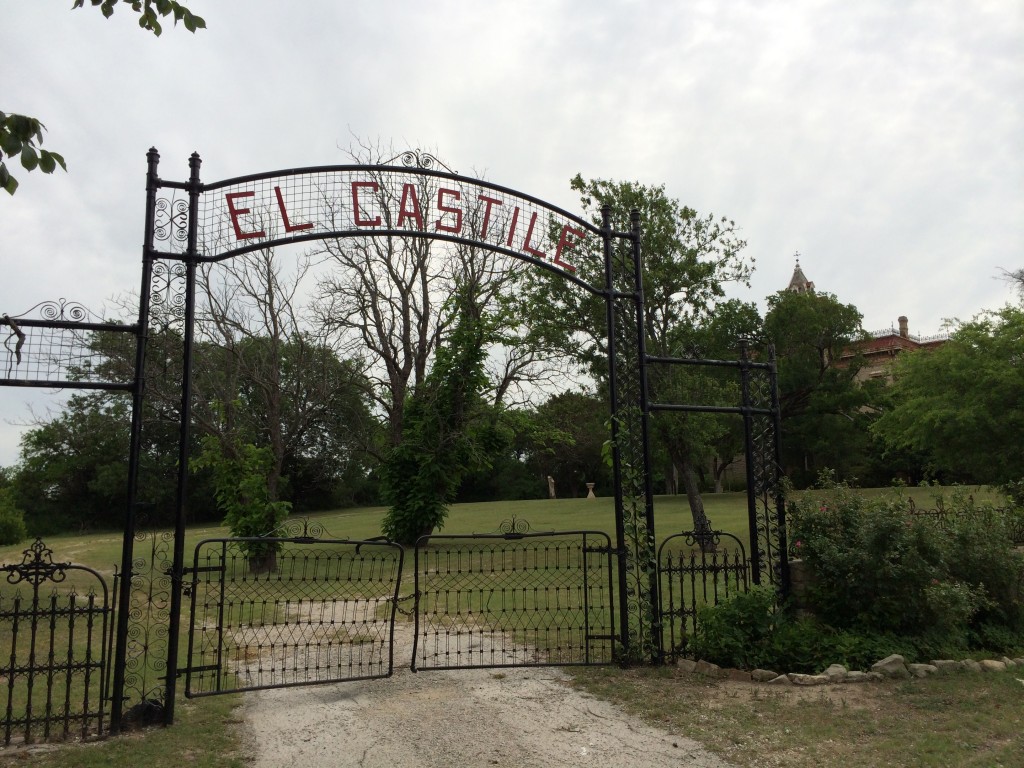 From “El Castile” the courthouse was very visible, only a half a mile away or so. We made the quick trip over the downtown to revisit the Wise County Courthouse and arrived just as a large biker gang rolled in. 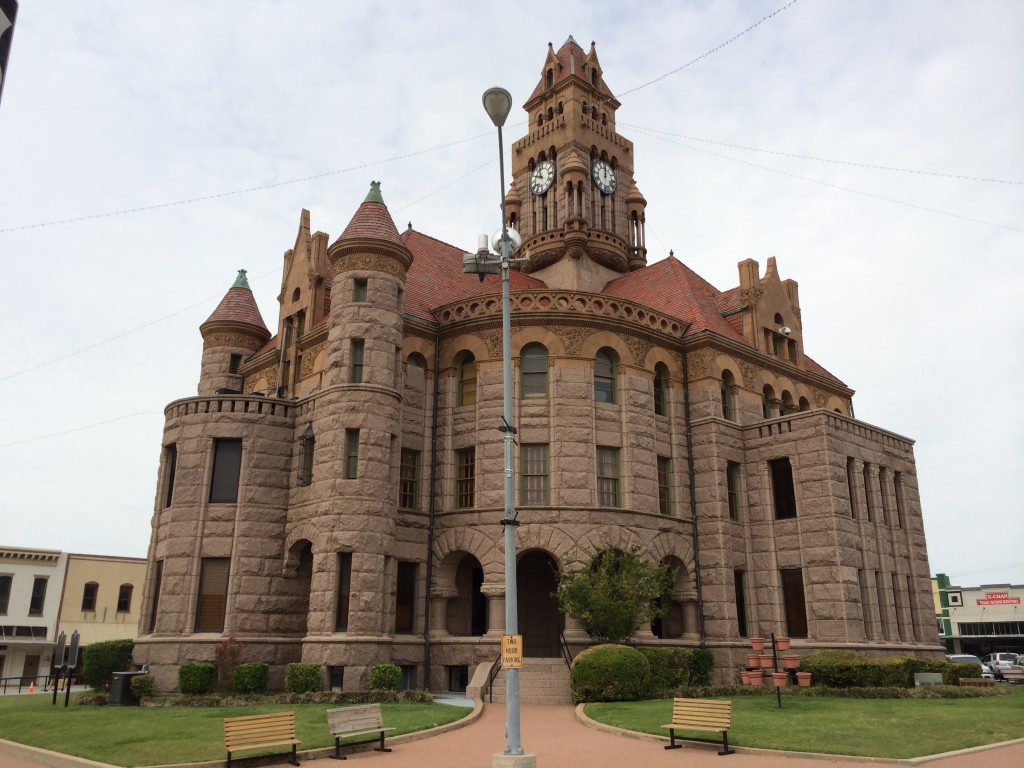 My grandfather stepped inside a restaurant off the square to ask about the history behind El Castile and a woman told him that a wealthy man built it for his wife and his wife did not like it. She said no one ever lived in it. Research will prove whether she’s right or wrong.

Montague County, #14 was next, so we followed the highway up and out of Decatur, headed for Bowie, the largest city in Montague County. A sign on the way in read that Bowie was soon to be the site of the world’s largest Bowie knife. That’s reason enough to go back someday. Bowie is not the county seat, but it is ten miles southwest of it. Taking Highway 59, we arrived in Montague shortly. Montague is a small town that I remembered as not having much activity. I was not wrong. The 1913 courthouse was larger than I remembered, as was the square. I realized this time that the original jail (now the Montague County Museum) was located directly next door. 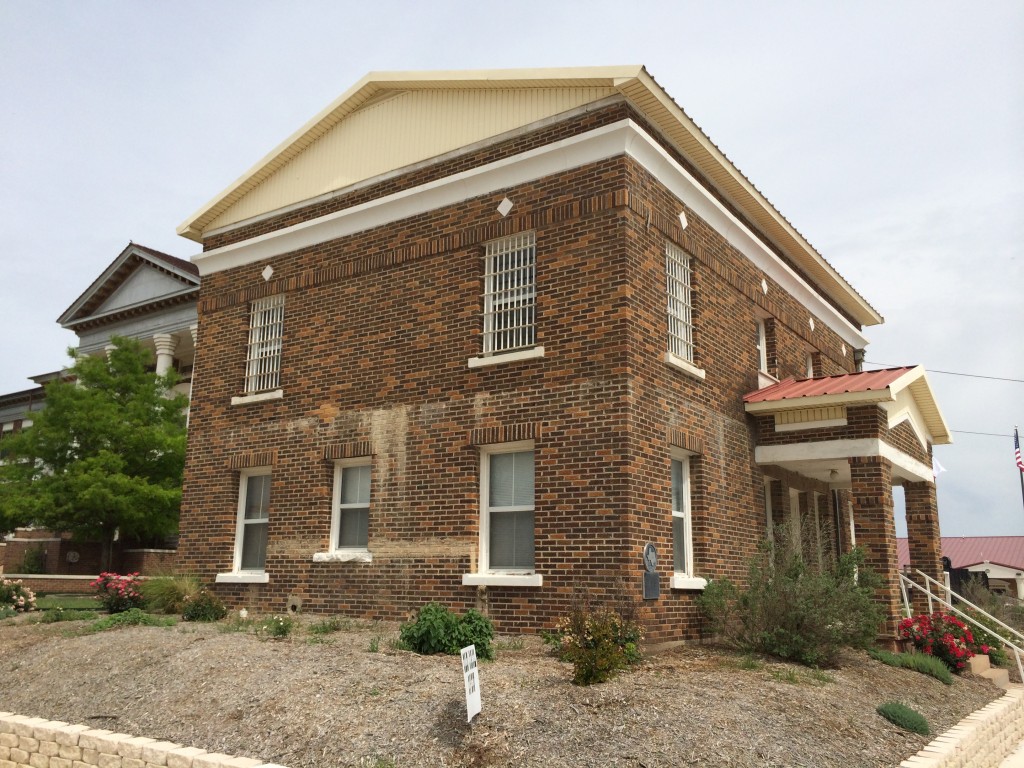 Our next stop was Henrietta, seat of Clay County, and past home of As Good As It Gets, a small diner my grandfather and I enjoyed the first time we came to Henrietta in January 2011. Sadly for me, the restaurant has since shut down, and so after photographing the Clay County Courthouse, we moved on rather than had lunch.

My original trip to Wichita Falls, seat of Wichita County and our next stop of the day, had resulted in a photograph of myself next to a building highly blocked by trees. I was glad that by returning I’d be able to get a new picture of myself along with more pictures of the building. The courthouse there is a large, modern structure somewhat similar to the courthouse in Bryan, Brazos County. It’s impressive in size, but not in grandeur. 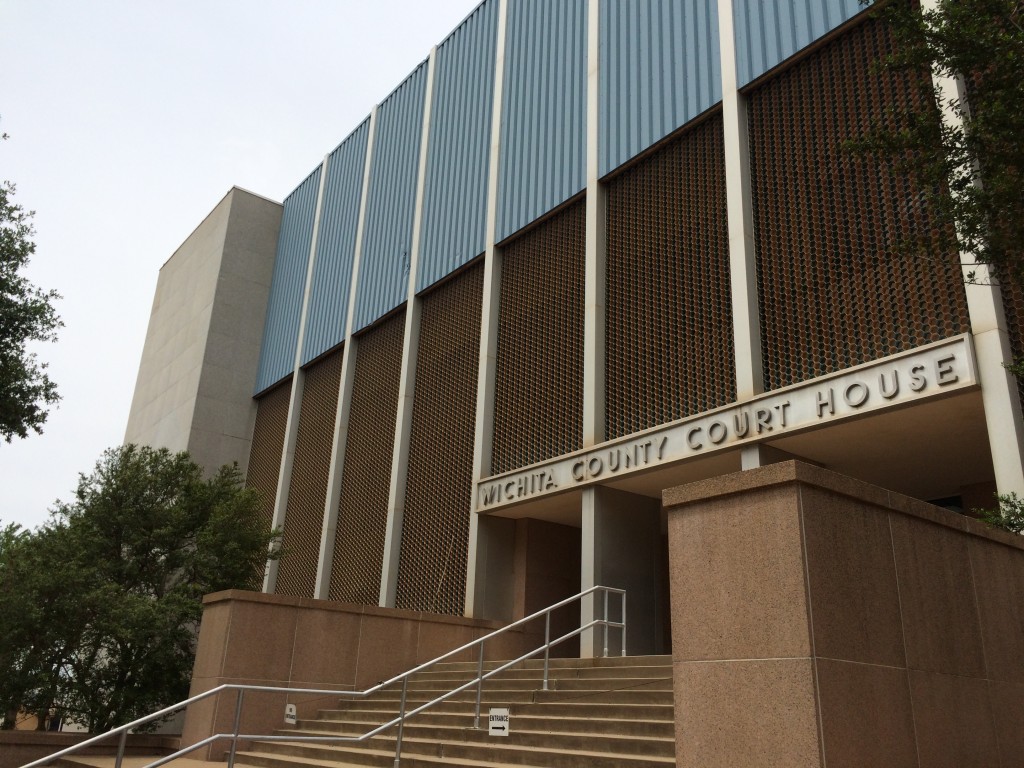 Definitely hungry for lunch at this point, we headed to the south side of town, looking for something that might catch our eye. As we got further and further down Highway 79 towards Archer City, our options in Wichita Falls ran out and we decided to wait and find something in the next town. Just off the courthouse square was a small place called Murn’s Cafe we had not seen the first time we visited Archer City and we stopped. After lunch, I went to work photographing the courthouse and the surrounding square. Some of the buildings there reminded me of The Last Picture Show, most likely because the 1971 movie was filmed here. 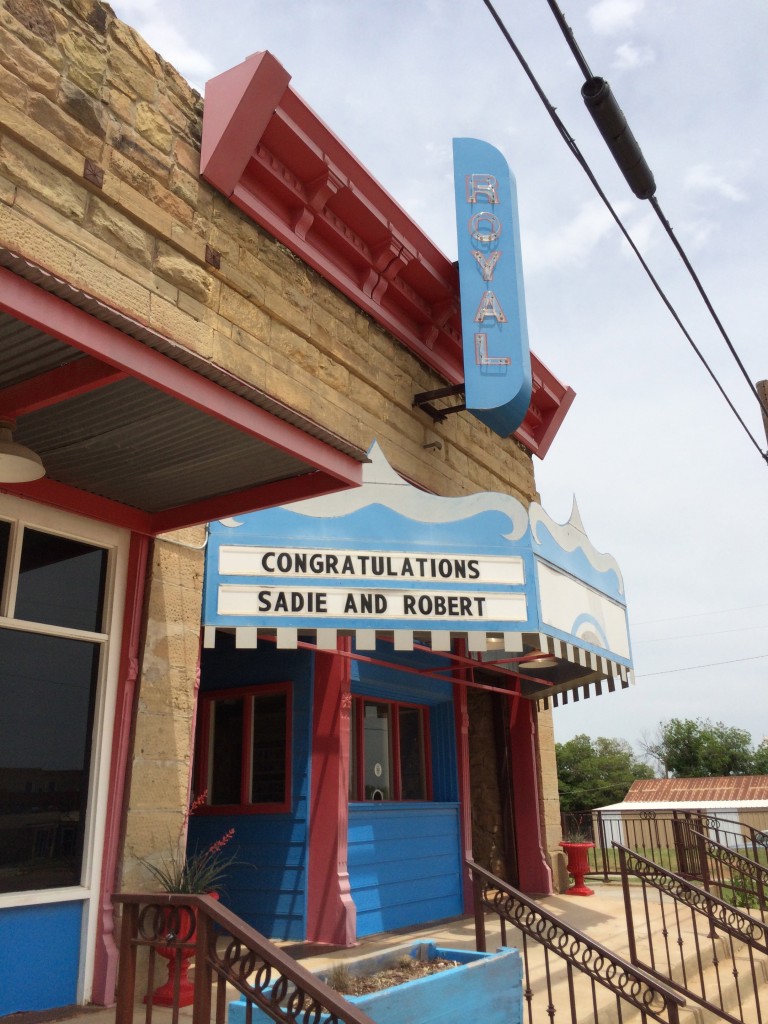 The town’s most famous native son, Larry McMurtry, wrote the book the movie was based on and is still the most talked about man in town. His massive book collection, turned in to an actual bookstore, was our last stop in town. It’s called: Booked Up.

The highway between Archer City and Olney was littered with huge wind turbines, some of which we photographed and stopped to listen to. I’ve always admired a Texas landscape of wind turbines. At Olney, we switched highways to head for Graham, seat of Young County and #18 on the original list. Arriving in downtown Graham, we found ourselves competing for space around the courthouse with a church benefit, who was trying to raise money to send their pastor to Sweden, or so said one of the women there said. 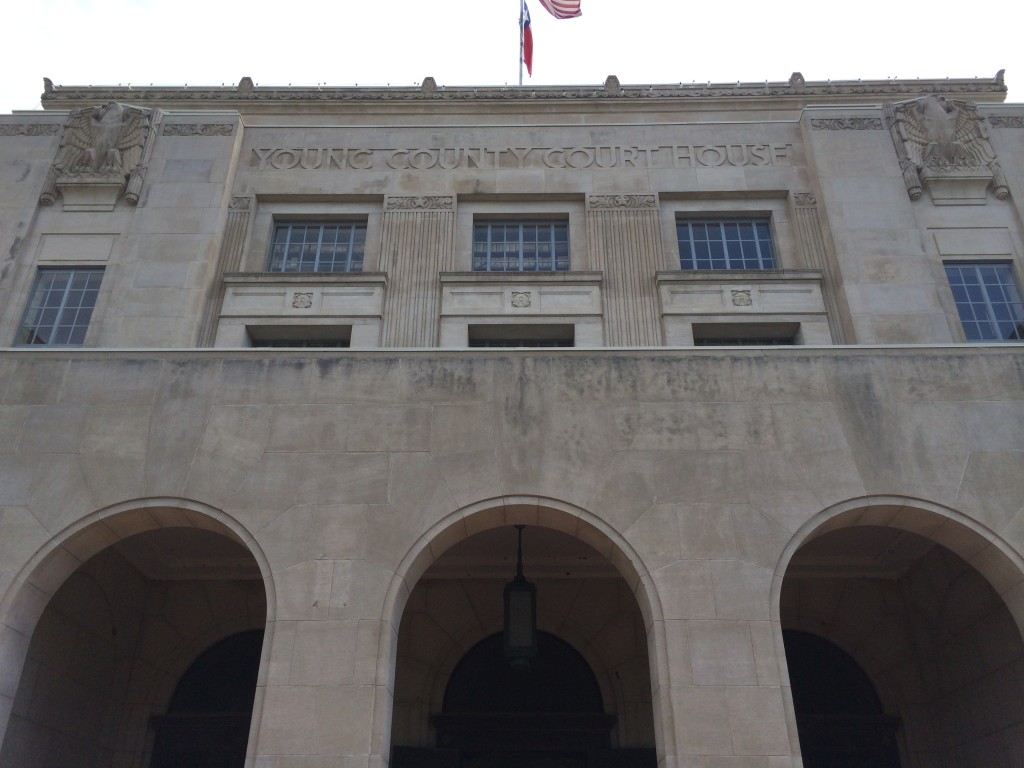 Trying as hard as I could to keep their tables and other decorations out of my shots, I moved around each side of the courthouse until I found the doorway to the original Young County Courthouse, preserved by the county and erected as a monument across the street from the modern building. I was fondly reminded of Stephens County’s similar approach.

Our final stop lay to the east in Jack County where the Jack County Courthouse needed to be rephotographed. Once there, I found both the cornerstone and bell from the original building displayed on the courthouse grounds. Seeing the courthouse history protected in Young and Jack Counties was a fine ending to the day.