We were off! Panhandle bound! We started the day (Thursday, May 29) driving to Weatherford to get on Highway 180 for Mineral Wells. From Palo Pinto County, we planned on heading north to Graham, Newcastle and Olney before turning west and entering Baylor County, our first stop. I had actually just revisited Young County nearly two weeks before on May 17, which was a Saturday. Due to this, I hadn’t been able to photograph the interior. Also, at the time of my visit a church benefit had “set up camp” on the courthouse lawn, limiting my photo-taking ability. While passing through Graham, I made up my mind that we should make a quick stop. 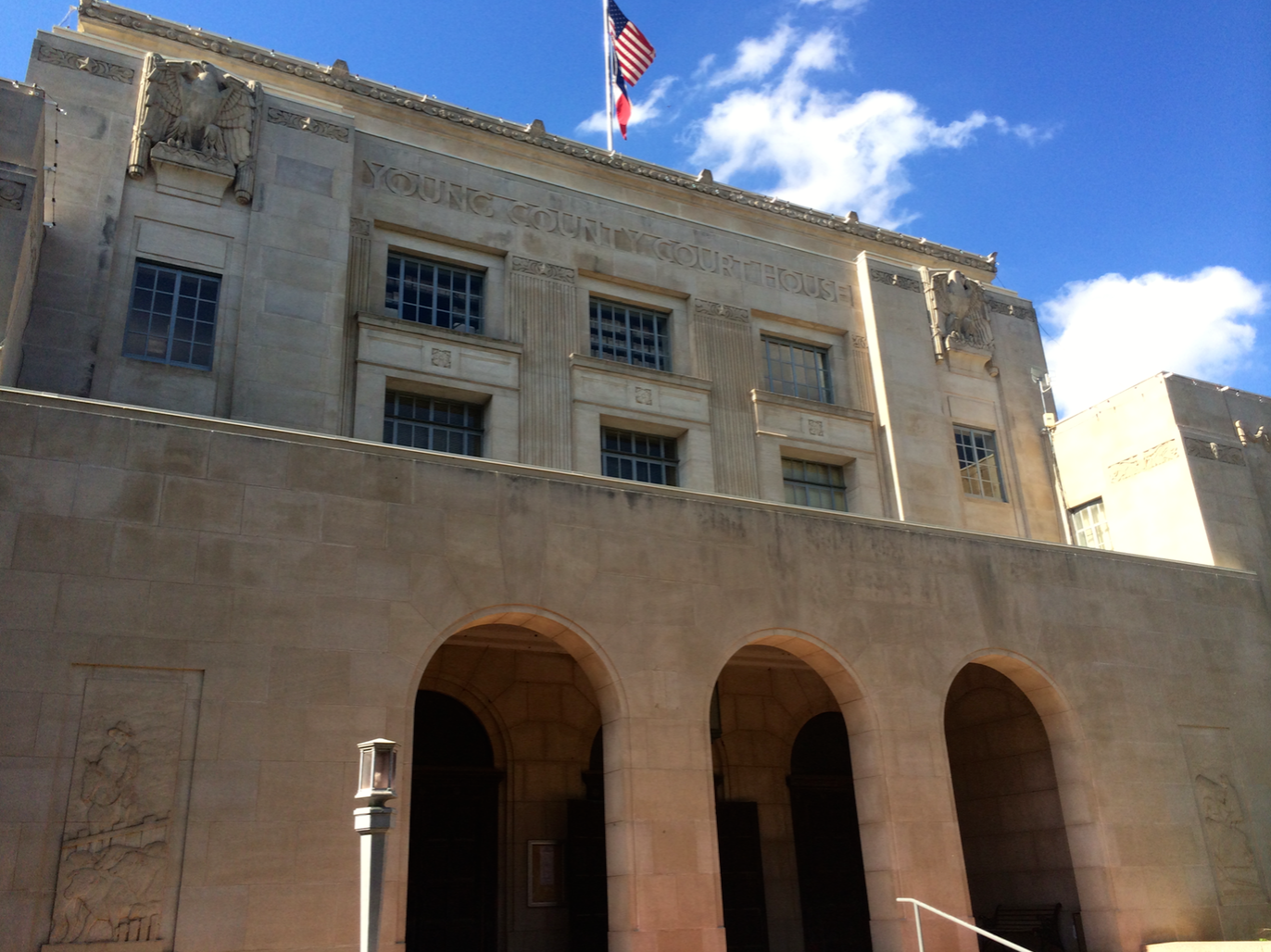 The interior is typical of a Moderne courthouse; smooth walls colored different shades of white and gray and that old courthouse smell. What I did find unique to this courthouse was a “Have You Gained or Lost Weight?” machine like you might see at a carnival. It’s directly to the right of the main entrance.

Losing a bit of time on stopping in Graham, we booked it north to Newcastle and further on to Olney where we followed the right set of roads to link us to Seymour. I’d been to Baylor County once already, last July, and never had added it to the redo list. Going through my pictures not too long ago, I decided that I needed to go back to the Baylor County Courthouse one more time, despite not wanting to. It’s an unpleasant building, a modern sixties byproduct that replaced the grander 1884 design. 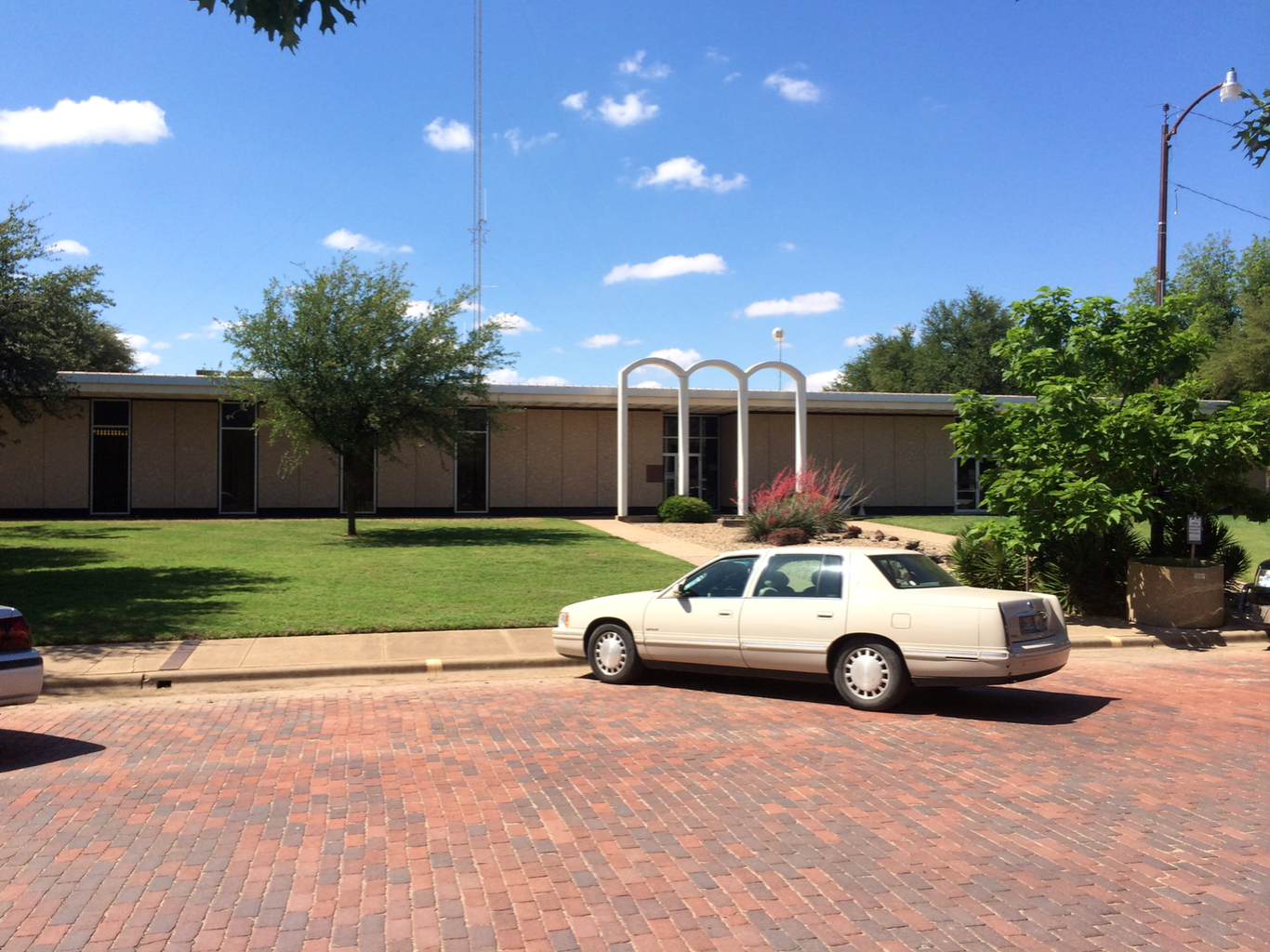 As I approached the northern entrance, an old man popped out of the doors and said, “You know what you should take a picture of?” He informed me of how the county had saved two pieces of the original building, each a large rock chunk with the numbers 1884 on it. I eagerly photographed both. Turns out that old man was the Justice of the Peace for Baylor County Precinct 1.

I also found while in Seymour that the county library shares the same building as the courthouse. Through one door, one enters into the world of the legal system and through another, one travels to a world of reading and books. But I found that this library was not average. Tucked into a corner of the building was a display case featuring actual fossils discovered in the Seymour area. One of which was a full, or near complete, skeleton of a dinosaur first discovered in Baylor County. It was given the scientific name, “Seymouria Baylorensis.” A dinosaur nut at heart, I’m surprised I didn’t already know this.

At this point I feared we were losing time. It was about 11:20 and we hadn’t even been to a new courthouse yet. That would change very soon. Knox County, #147, was next up. On our way to Benjamin, a county seat of roughly two hundred people, we passed by a rest stop overlooking “the Narrows,” a canyon that separates the drainage basins of the Wichita River. Evidence of the area being occupied by Indians has been uncovered here. Wanting to get a picture, we stopped. I knew quite quickly why it has been chosen to building a rest stop here. The bluff the stop is located on offers fantastic views of the Narrows.

A few miles more and we were in Benjamin, getting our first look at the Knox County Courthouse. The town of Benjamin is very small and seems to be very isolated. Existing at the very edge of the great plains, it’s only a place people call home, not one people visit. But here I was, standing in the center of town and photographing the courthouse. It’s a Depression-era structure designed by Moderne architects Voeckler and Dixon of Wichita Falls. When it comes to Moderne buildings, their work has always impressed me.

The courthouse stands two lots over from the old jail and one lot over from what remains of the old Benjamin Bank. All that’s left of the bank is a single safe, standing alone in the middle of a grassy square. Next to the safe, diagonal from the jail, and directly across from the western side of the courthouse is the police department and criminal holding area. The single inmate currently incarcerated decided she wanted to be my friend. I watched her watch me and I even got a wave when we drove by her to photograph the jail. When we headed north towards Crowell, I was glad to be leaving Benjamin behind.

Crowell, seat of Foard County (#148), has an early nineteen hundreds courthouse model that once contained a dome. According to The Courthouses of Texas by Dr. Mavis Kelsey, the dome was removed by a tornado and never replaced. I photographed it, along with the city’s two statues honoring veterans on the square. Funny, both statues are missing the opposite hand. Today, the building stands without any added help, but a renovation could be used in its future. 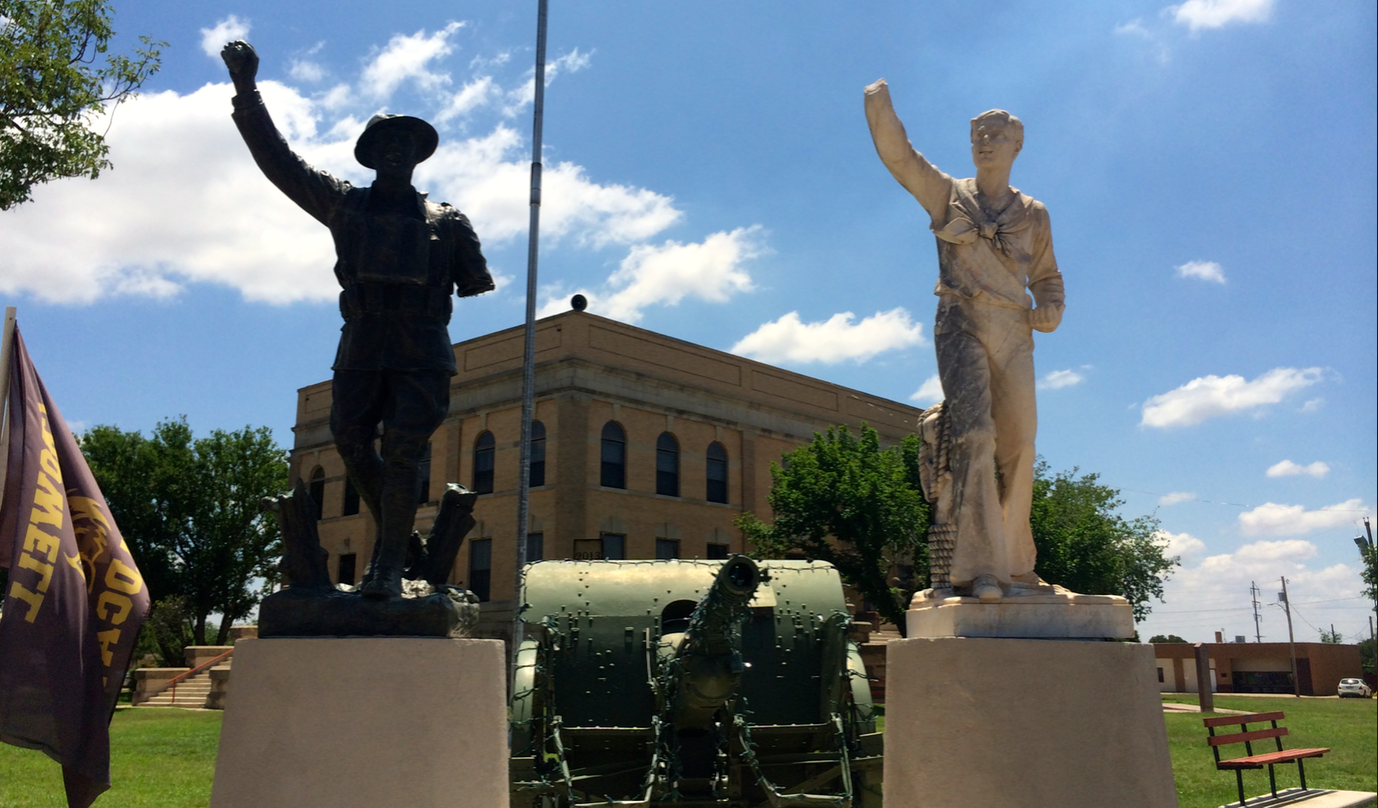 At this point, I took over the wheel, once again trying my luck at driving on courthouse trips. I drove us north into Hardeman County and Quanah, the seat. Like Seymour, I had visited Quanah briefly back in July en route to Amarillo. It makes #73 on my list. This being from the period of just photographing myself in front of the courthouse and moving on, I was glad of the chance to redo this one. Plus, it was undergoing a THC Restoration at the time of my 2013 visit and by now it was complete. In fact, two elevator repairmen inside said that the county had just started moving back in to the building. 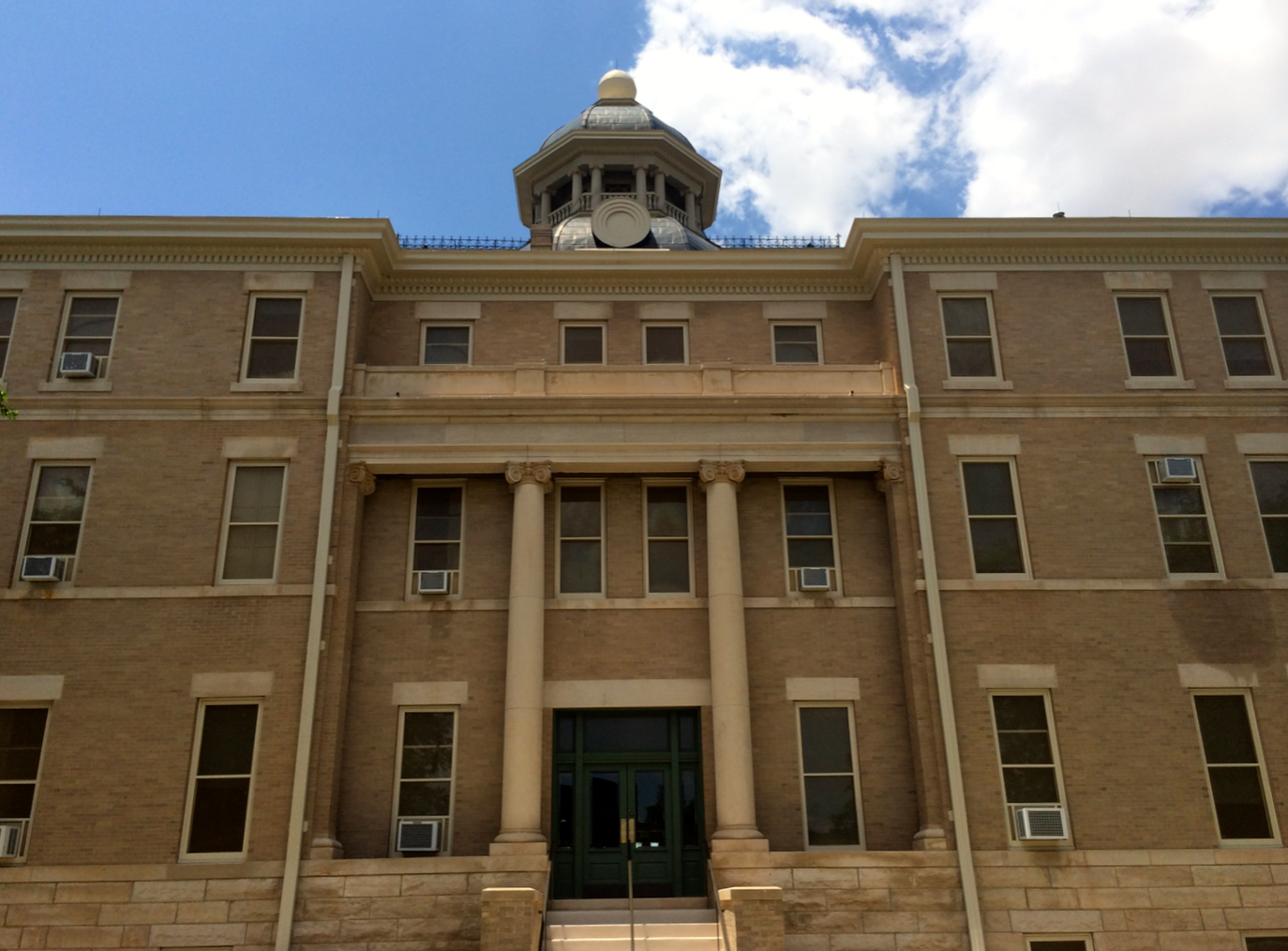 Past the courthouse, I drove us further downtown, making several stops for pictures, including one at the retired Hardeman County Jail. The Hardeman County Museum is nearby, about a block away. There, we saw more inmates. Under the careful watch of the sheriff, they were doing some kind of community service for the museum.

By now the typical lunch hour had ended, and we hadn’t eaten yet. To fix the problem, we pulled in to K & R’s Cafe along Highway 287 a few miles from downtown. Being summertime, I knew the days would be long and light would be plentiful, but I was still concerned about time. We needed to get going.

Our next stop was at Childress (#74) to redo the Childress County Courthouse. Typically on courthouse trips we try to get my picture in front of or around the main entrance of each building. When we first visited Childress, I got my picture on the courthouse’s northern side. The main entrance is on the southern side. Sure, which side I got my picture on doesn’t really matter, but in this instance, I had no idea of the much more impressive façade on the south side. This time I got to see it. Also, who did I see here but more inmates! They were doing community service here as well. 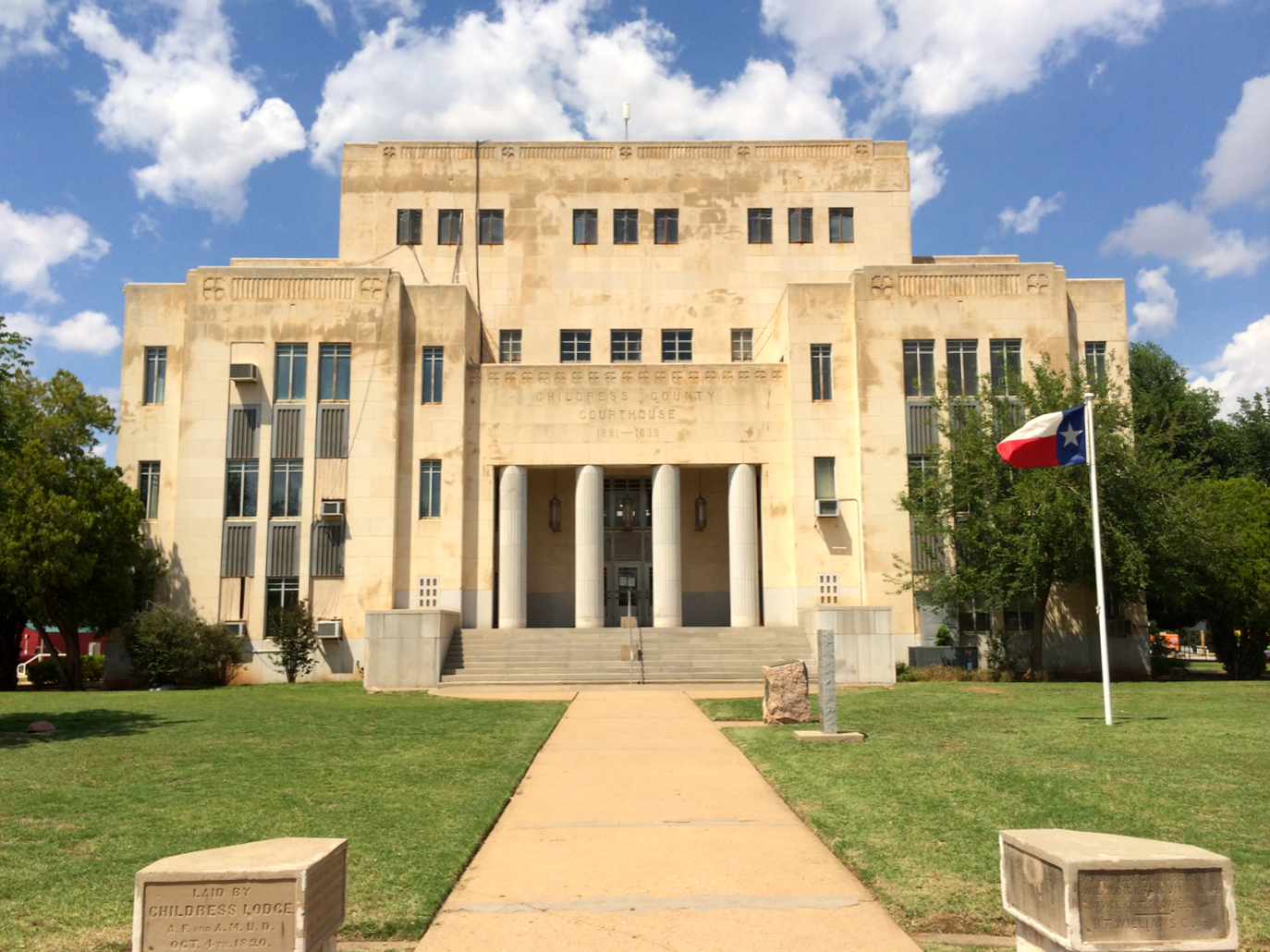 We moved on, myself still driving, to Memphis, Texas. There, I needed to revisit the Hall County Courthouse, another stop I made on the July Amarillo trip. As we approached the town, the clock started counting down to 5:00 (closing time), so I knew that Hall County would be the last courthouse I could enter of the day. On my way in, I stumbled upon the courthouse employees’ smoking corner, cleverly secluded behind two large columns on the western façade. I quickly became aware of this area’s usage when I tried entering the courthouse and found two women that seemed to appear out of thin air to my left. 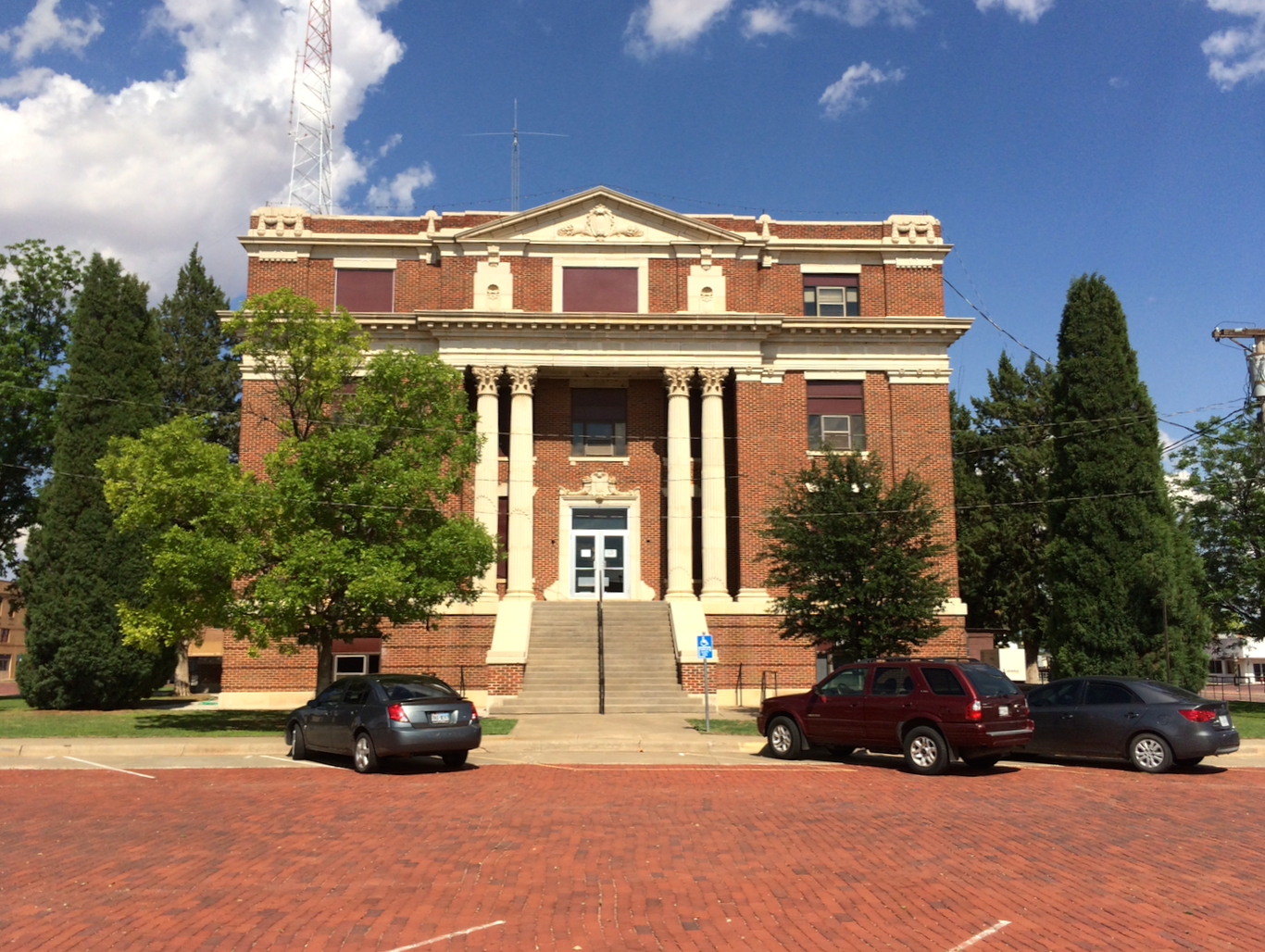 I relinquished the wheel after Memphis, but that didn’t mean we were stopping for the night. Tonight’s stopping point was Amarillo, some eighty-seven miles away. Farther up 287, we stopped at the seat of Donley County (#76), Clarendon. Here stands one of my favorite courthouses, the 1880 Romanesque Revival work of Trinidad, Colorado architects Bulger and Rapp. This was their only courthouse. It’s easy to see why. This unique display of architectural prowess would be hard to duplicate. When I first stopped in Clarendon the courthouse was still undergoing a THC renovation, similar to Quanah. So it was important to me to revisit it for the purpose of seeing it completed and for the purpose of getting just a few more pictures. 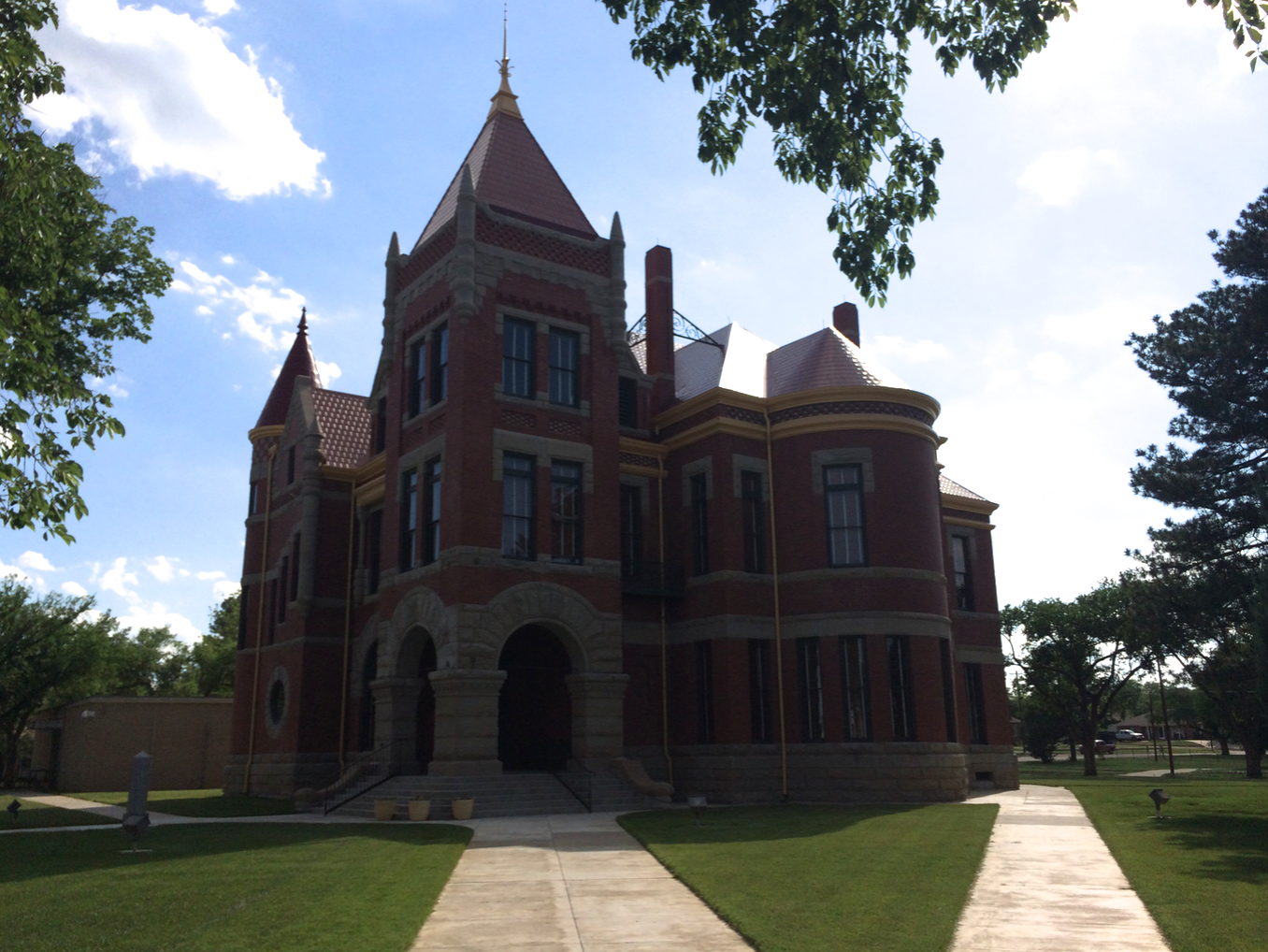 The next stop along 287 we took in July was Claude, seat of Armstrong County. This time, however we bypassed Claude in favor of taking on a new courthouse. Rather than head northwest for Amarillo, we went straight north into Gray County where Pampa is the seat. Pampa is a fairly large town with cows on the mind. At a distance, it was somewhat difficult to distinguish the courthouse from city hall, as they both are grand buildings. This courthouse made #149.

At this point the sun had begun to really descend, but we figured there was time to squeeze in just one more county, #150. The honor of being such a benchmark number was bestowed upon one of my favorite places in Texas, namely Carson County. The road between Pampa and the seat of Carson County, Panhandle, is littered with wind turbines. Nearly every time it looked like they ended, another row sprouted above the horizon. 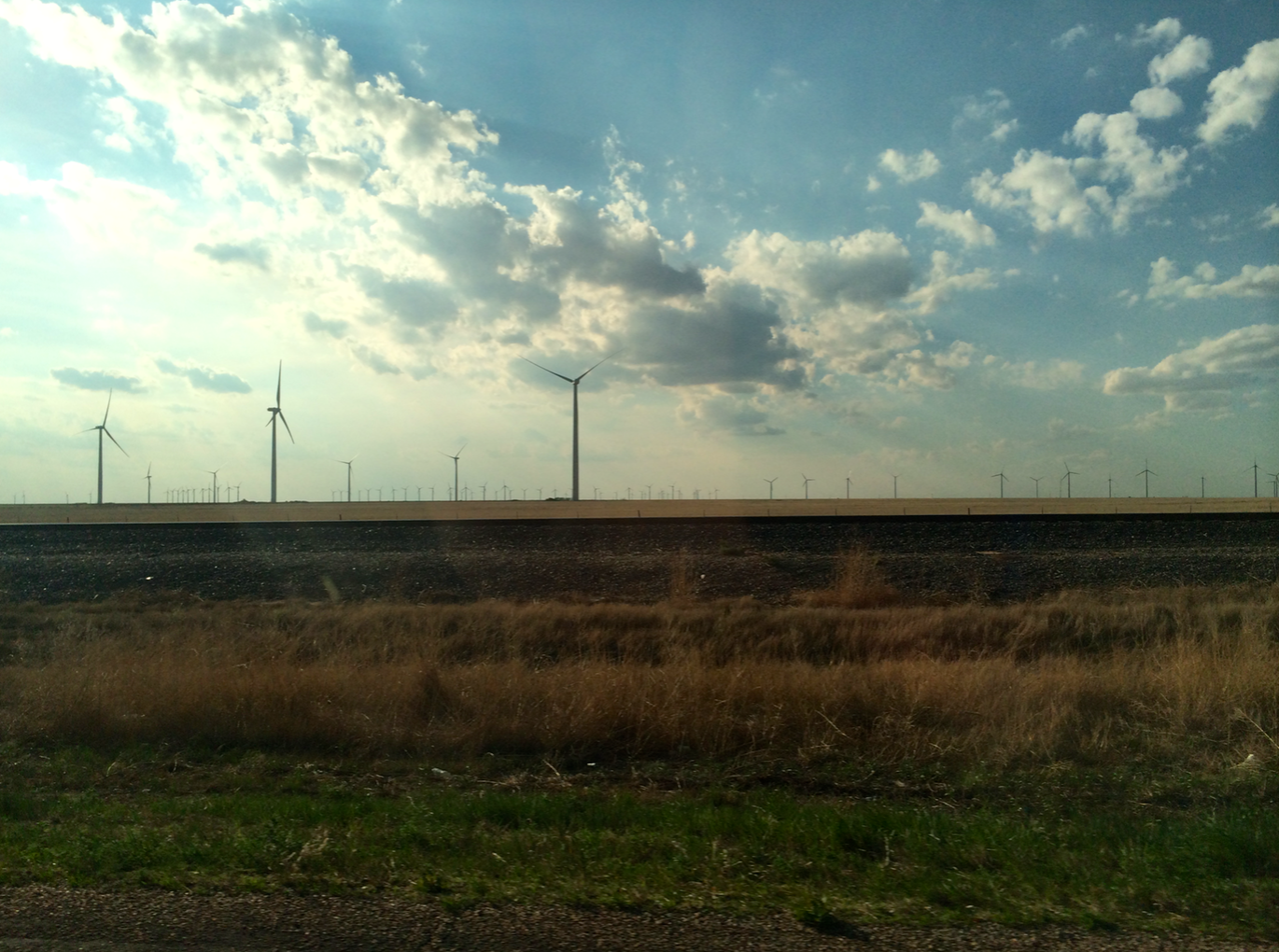 We got to Panhandle around 8:00 and the sun was still up. A miracle! I was thankful for the longevity of summer days. What a mistake… 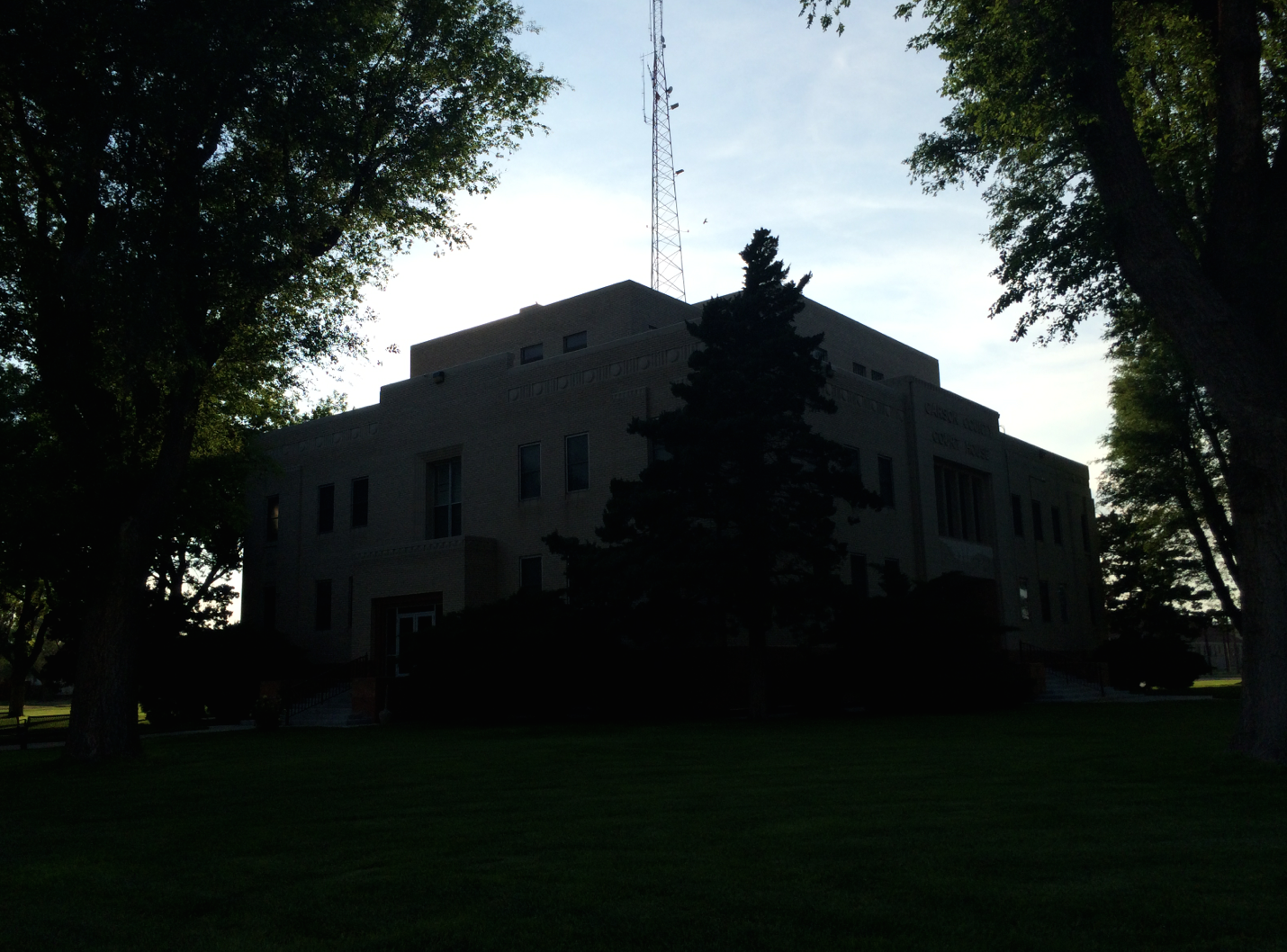 I realized that the sun might still be up, but it was of little to no use to me at this hour. The dark shadows cast upon the Carson County Courthouse made photography here a slight issue, but I pulled it off, or so I thought. We decided it would be the best decision to come back to Panhandle in the morning, as it was only a slight detour from Hutchinson County, our next stop.

Highway 60 from Panhandle feeds directly into Amarillo, where we found a hotel. For dinner, we took off to the Big Texan Steak Ranch, home of the free (if you can eat it in an hour) 72 ounce steak. Visitors who decide to take on the challenge are seated at a table raised on a stage above the rest of the restaurant. While we were there, someone chose to try and do it ( which was quite an experience to watch). We finished our dinner and left for to the hotel to get some rest. Tomorrow was going to be a longer day than we thought.